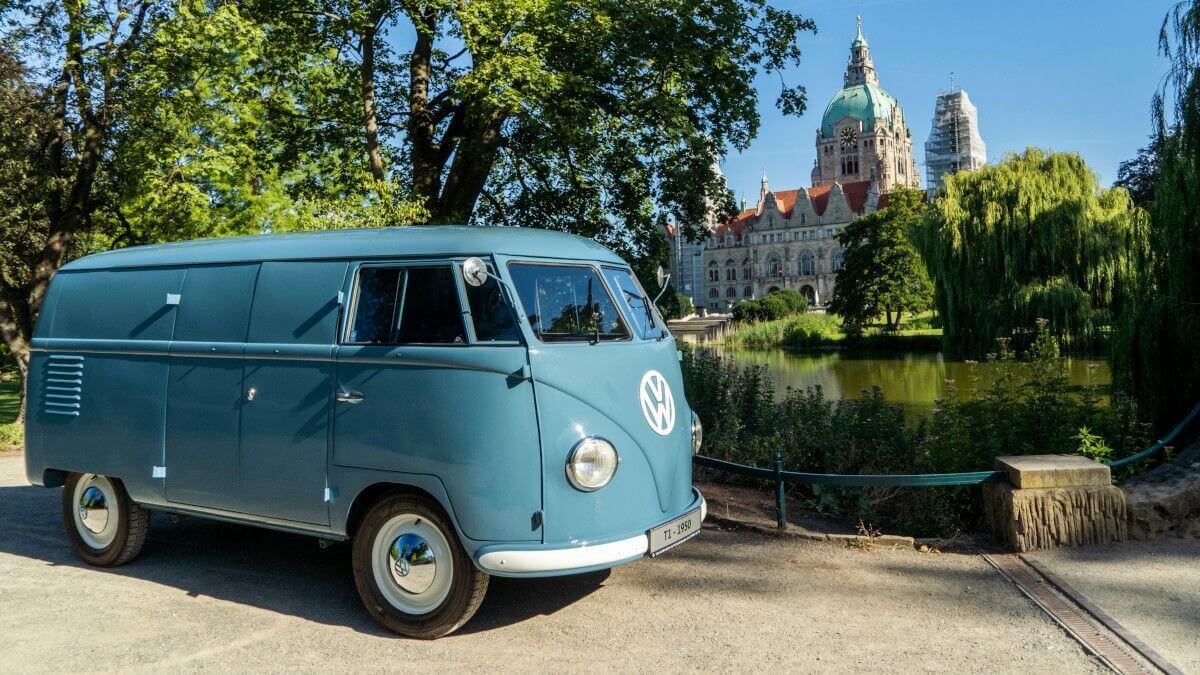 Production of the Volkswagen Type 2 began in Wolfsburg in March 1950. Behind this sober name is the T1, also known as the VW Bus or VW Bulli and still popular worldwide. Around six years later, production of this light commercial vehicle was transferred to a new plant in Hanover Stöcken, where today’s subsidiary brand Volkswagen Commercial Vehicles is based. Unfortunately only a few of the very early examples of the T1 produced in Wolfsburg have survived. However, this cuddly bus shares this fate with various other competitors: they were driven until they literally fell apart. However, Volkswagen Commercial Vehicles Classics was able to secure one car for its own collection in 2014. ‘Sofie’, as the last previous owner christened this VW, is the world’s oldest road-legal T1 and now tells a little of its own history.

Sofie rolled off the assembly line on August 5, 1950 with the chassis number 20-1880 and a paint job in the color ‘Taubenblau L 31’ (dove blue). Then, as now, a 1.1-liter four-cylinder boxer engine with 18 kW/24.5 hp was fitted at the rear, making the 990-kilogram panel van capable of speeds of up to 80 kph (49.7 mph) if required. Behind the full-length bench seat, a solid sheet metal wall separates the cockpit from the cargo area, which can only be loaded and unloaded through the two barn doors on the right-hand side. A tailgate didn’t yet exist on the original models of the T1. Below the relief-like logo there is only the rectangular engine hood. Even a rear bumper didn’t exist in the first years of production. A look at the lighting equipment also quickly makes it clear that this is a vehicle from the early 1950s. You will look for indicators in vain, instead there are trafficators in the B-pillars directly behind the doors. The A-pillars are fitted with nice little wing mirrors. 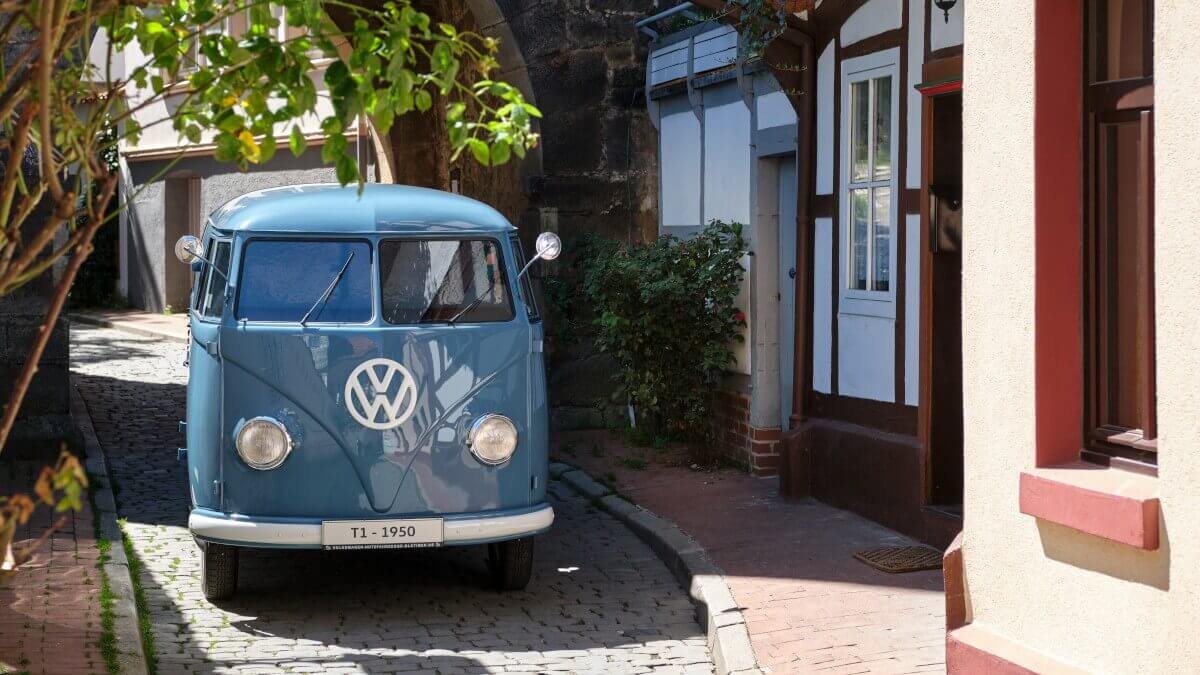 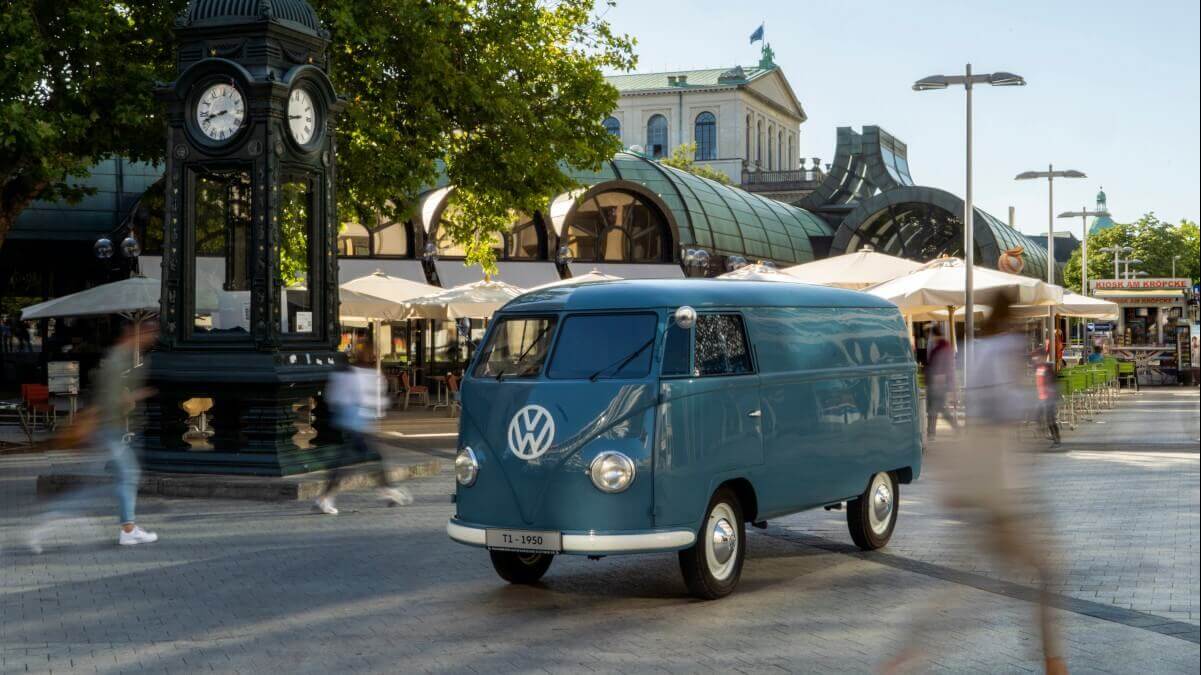 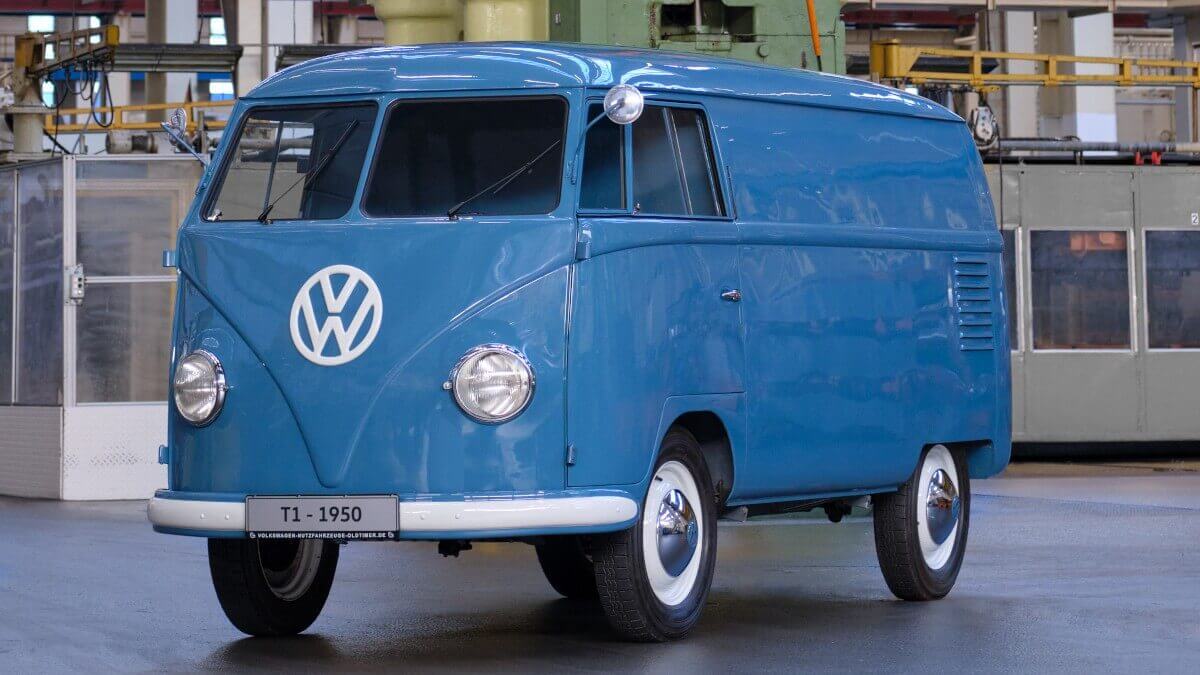 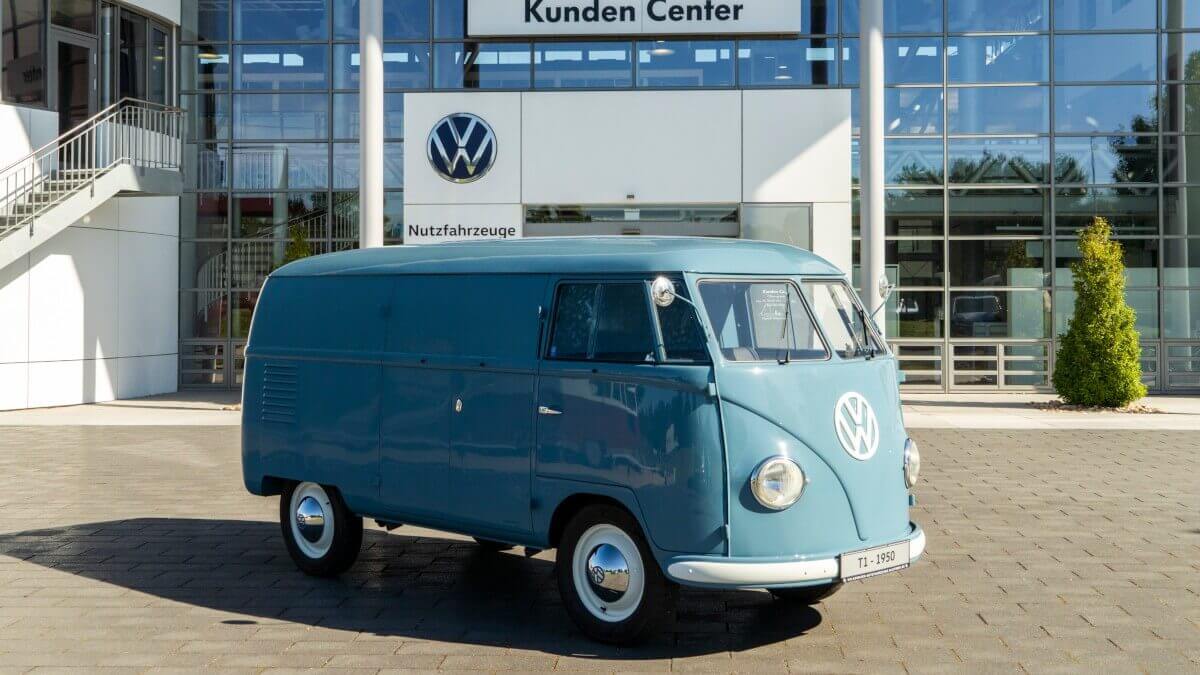 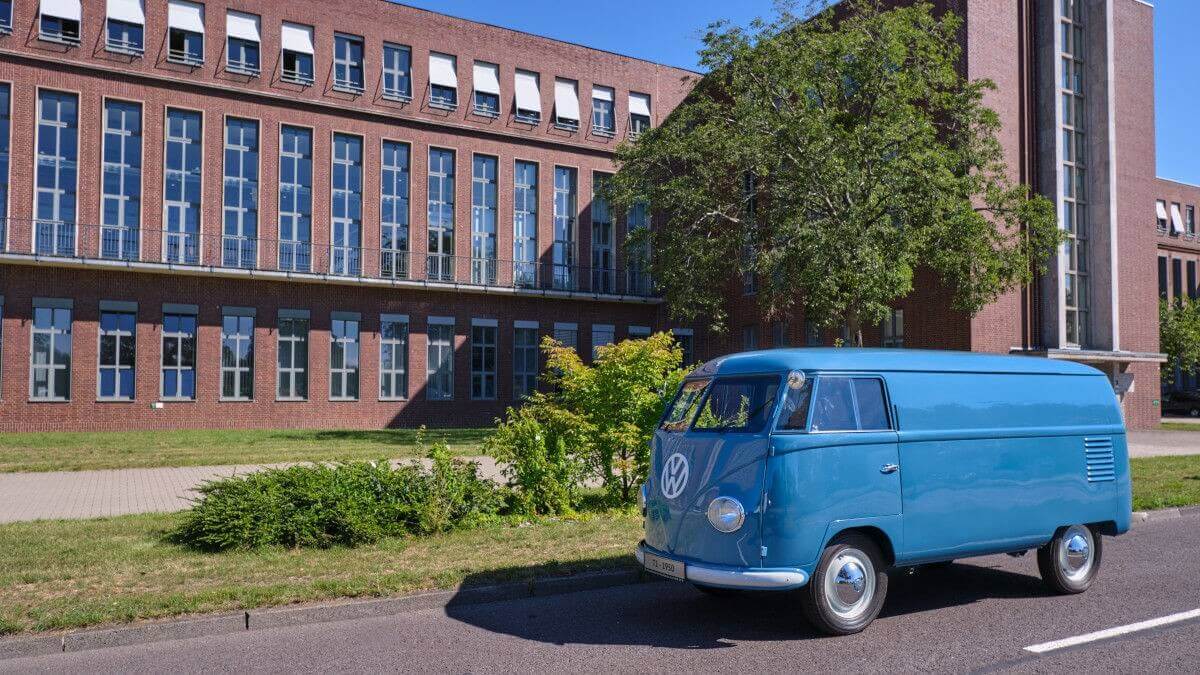 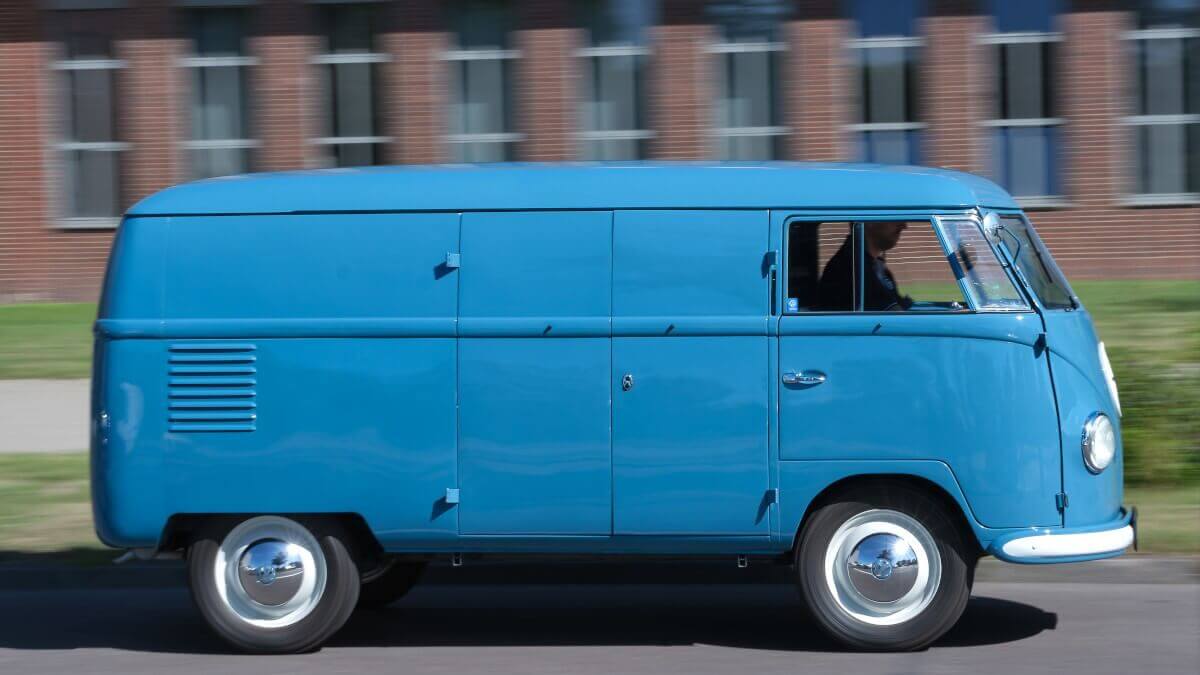 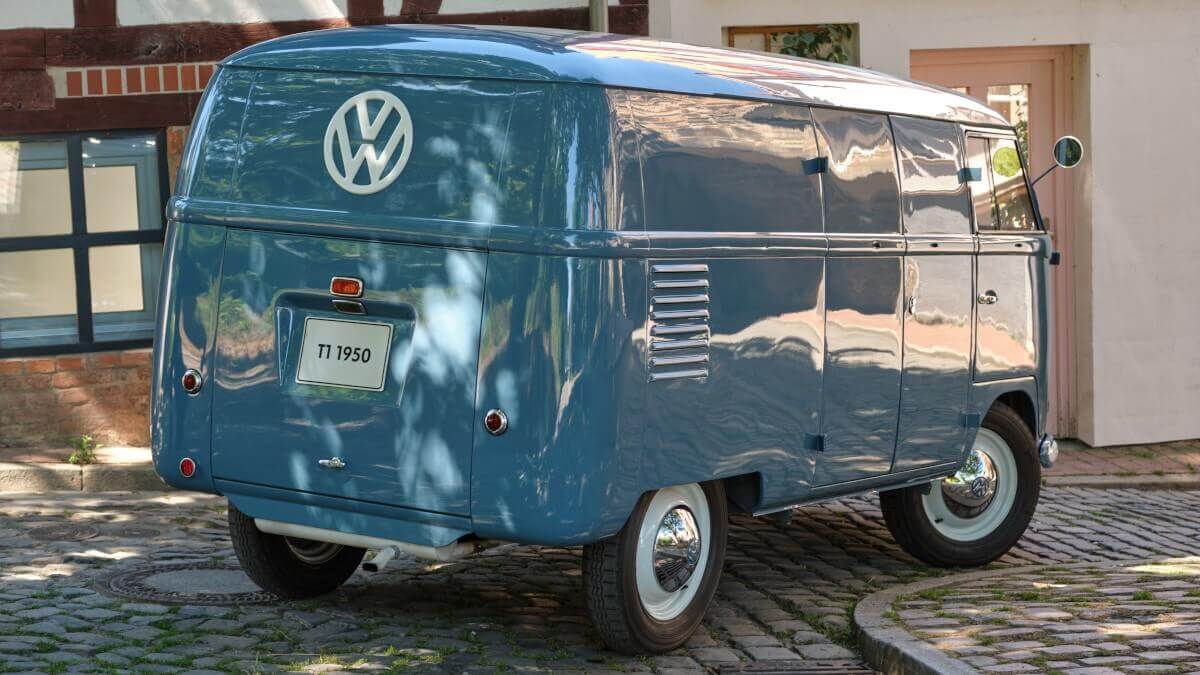 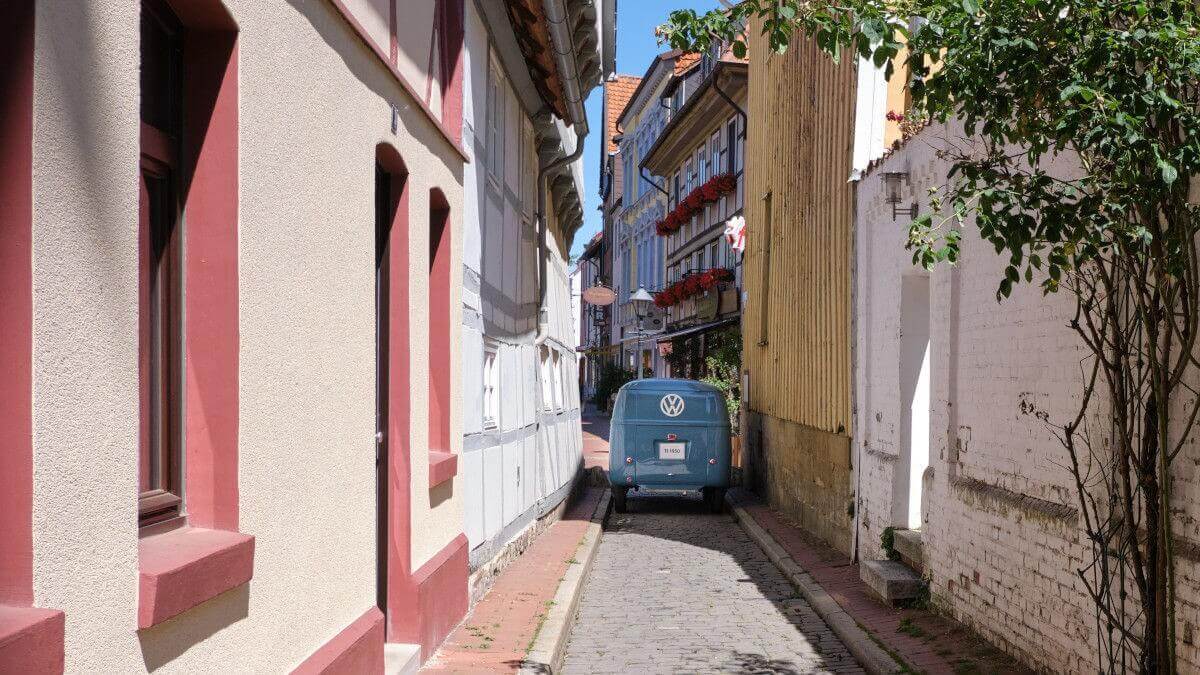 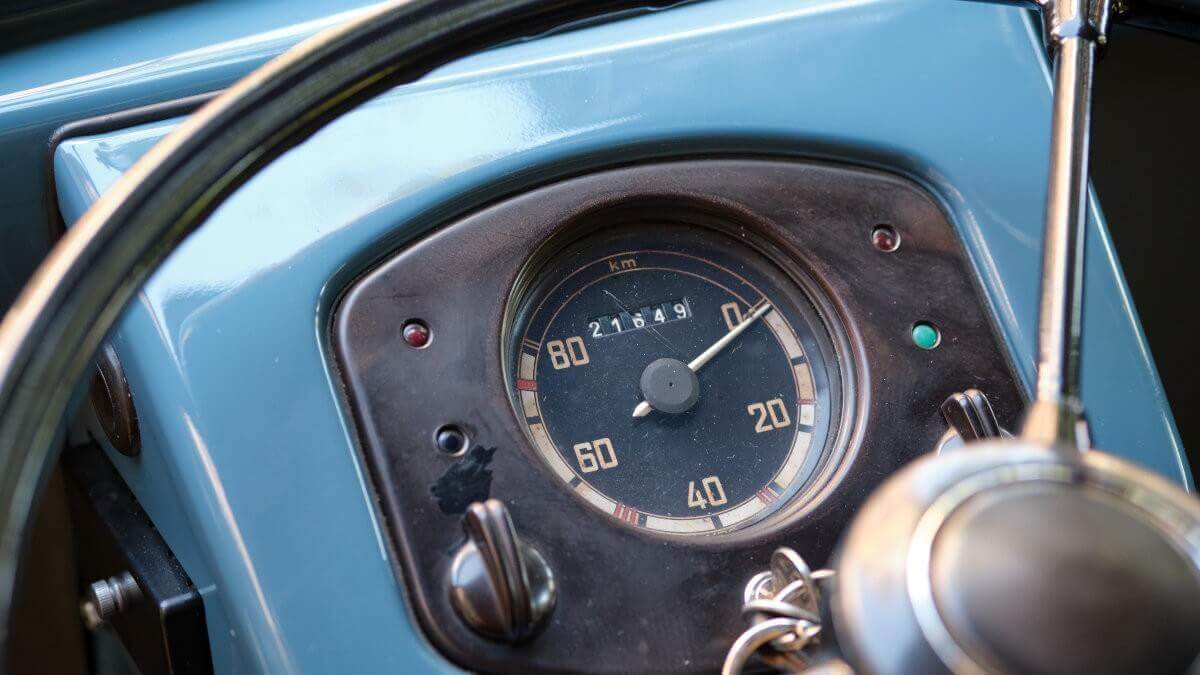 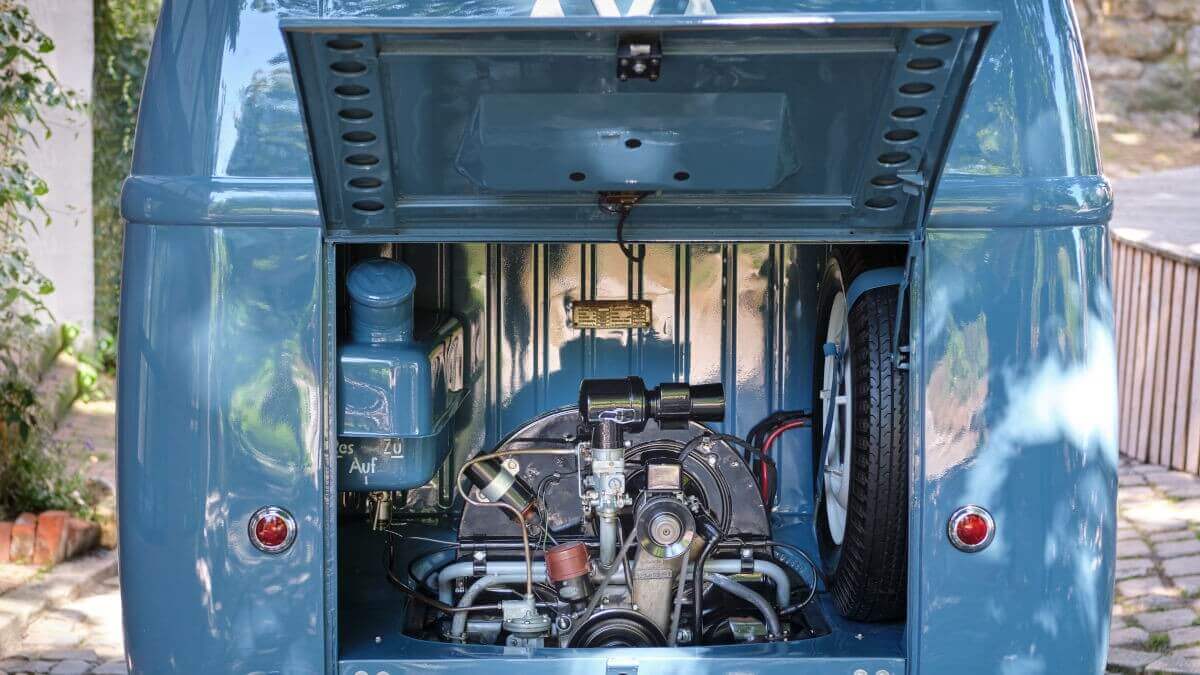 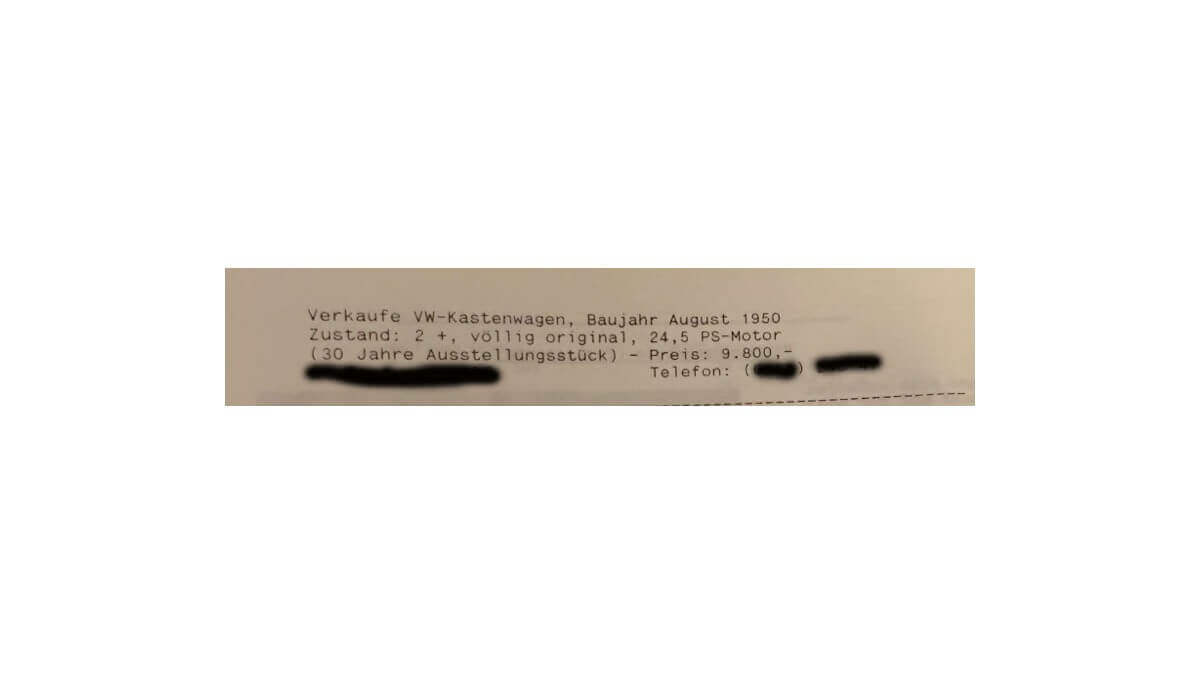 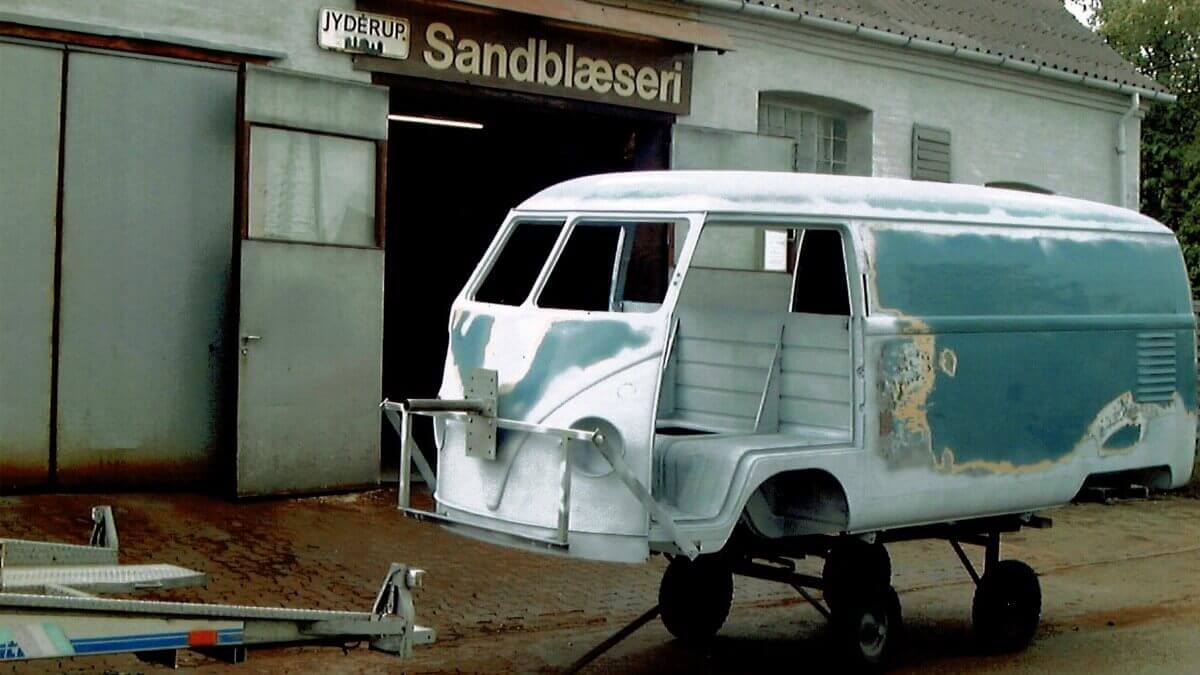 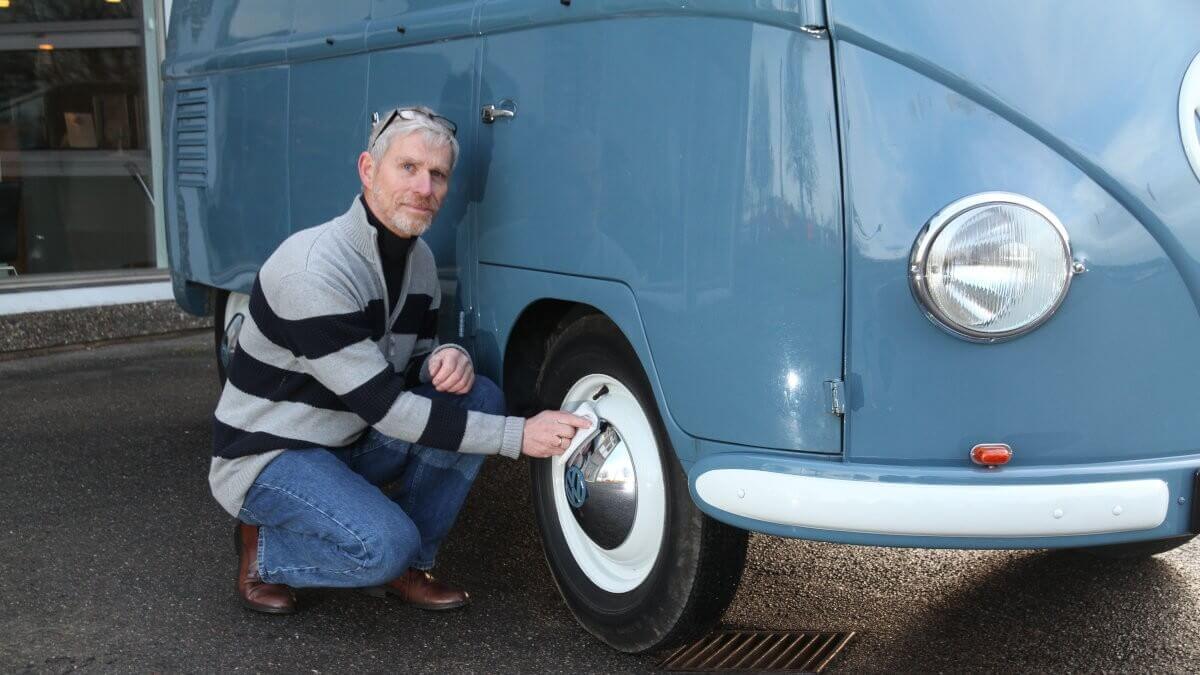 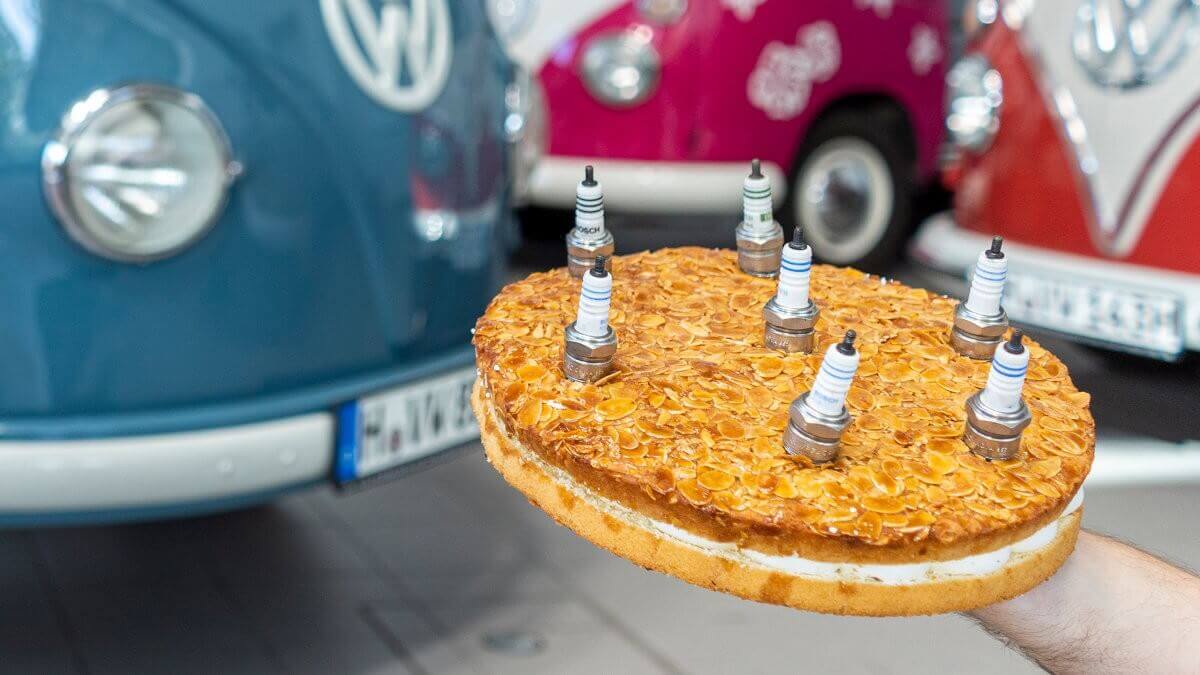 Shortly after its production, Sofie was the first Volkswagen Type 2 T1 ever to reach the city of Hildesheim and there its first owner, who used it for 23 years to transport goods of all kinds. The driver and his vehicle traversed every narrow alley in the old town of Heidelberg, before Sofie was forced into early retirement and sold to a VW collector. In the following 19 years, the still sprightly lady was part of various collections before she was offered for sale through a classic advertisement in the fan club magazine of the ‘Brezelfenstervereinigung e.V.’. Surprisingly, it took several attempts to find an interested party. Maybe it was because at that time photos weren’t taken and the text in the advertising was reduced to three lines only. Tonny Larsen from Denmark bought Sofie unseen by phone when he heard about her low chassis number. Shortly afterwards, she travelled to Denmark by tow truck, where despite a mileage of less than 100,000 kilometers, various components had to be replaced in order to be able to drive again before an extensive restoration started in early 2000.

Tonny Larsen chose the nickname Sofie, as this was also the name given to the very first Volkswagen Type 2 T1 ever delivered to Denmark. In 2003 he finished the restoration work with an extensive test drive to the VW meeting in Bad Camberg. In the following years Sofie collected another 20,000 kilometers on her clock while driving all over Europe. At many Bulli meetings she was voted the most beautiful vehicle – she was the oldest anyway. When Tonny Larsen decided to retire himself, his main focus was on finding worthy new owners for the T1 who wouldn’t banish Sofie to dark halls for more decades again. Many collectors offered him piles of money, but he decided to sell her to Volkswagen Commercial Vehicles Classics in 2014. To celebrate her 70th anniversary, there wasn’t only a cake with one spark plug per decade, but also a short tour to important sites of her first 20 years, for example to the VW plant in Wolfsburg and the city centers of Hildesheim and Hanover.