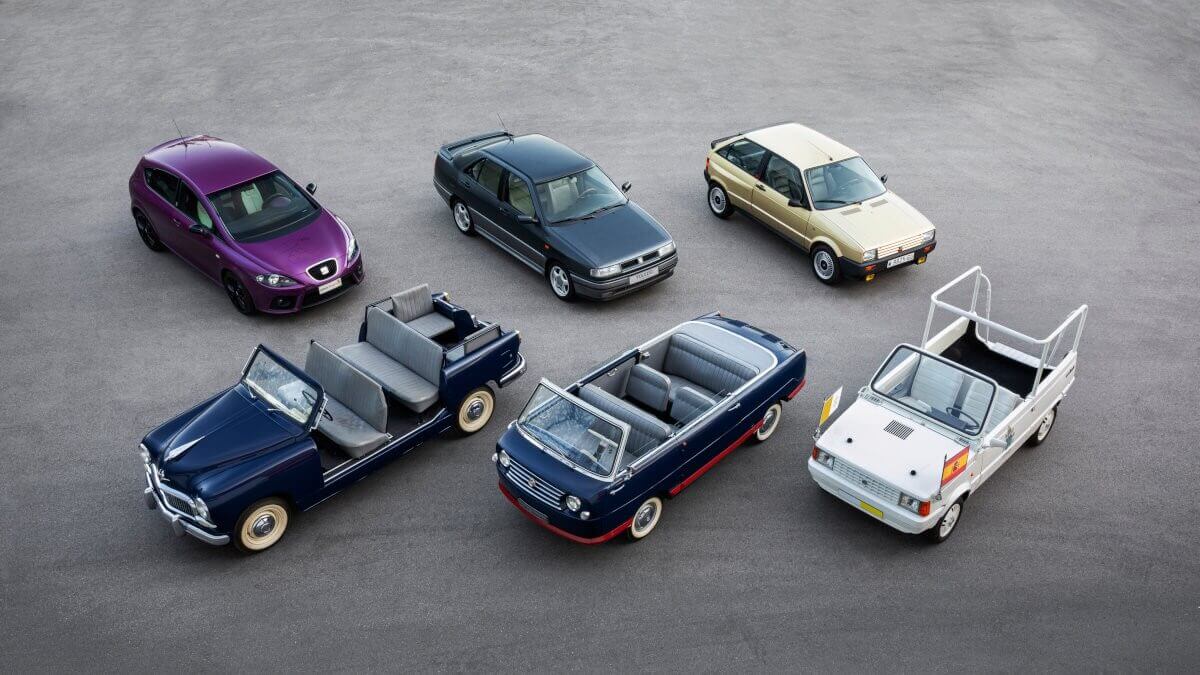 Seven decades is a long period in which a lot can happen. Seat was founded 70 years ago, and even in this company history, interesting, exciting and sometimes even funny anecdotes have been lined up, which have always expressed themselves in unique cars. In their current anniversary year, the Spanish manufacturer is deliberately putting 16 special models in the spotlight once again. This spectrum ranges from very early vehicles to the current Leon and includes unique cars for famous personalities as well as cars that have never been used outside the factory premises.

Already in 1956 the first special model from the colorful range on the press photos in our gallery was created. Seat drove visitors through the factory halls in the 1400 Visitas. Two examples of the normal 1400 were converted by removing the roof and the doors and adding a third seat bench in the rear. This was carried out by the same employees who produced the series cars on the assembly line. After eight years of service, the two visitor vehicles were rolled into a corner of the plant, where they remained until 2005. Due to their poor general condition, the mechanics of the classic department were then forced to rebuild one functional car from the two wrecks. From 1964 on, a very special Seat 600, whose body design Pietro Frua had drawn for an identical Fiat, was in service for the visitors. At Carrozzeria Savio in Italy, these drawings were used to create six minibuses for Fiat and one for Seat, which, thanks to three rows of seats, could accomodate up to nine passengers and had a removable glass roof.

In the early years, Seat exclusively produced Fiat models under license. Between 1968 and 1980, for example, they offered the 124 nearly completely identical in Spain, of which more than 900,000 units rolled off the production line. In 1966, this included the one millionth Seat, which was raffled off among the workforce at the time. However, the winner didn’t have a driver’s license, so he preferred to get a payment of the equivalent value instead of the car and the 124 was immediately added to the company’s own vehicle collection. A Seat Panda converted into the ‘Papamóvil’ (pope mobile) for Pope John Paul II made much more headlines in 1982. The narrow passages of the large soccer stadiums of Real Madrid and FC Barcelona made it necessary to provide a small and agile car. Nevertheless, it wasn’t lacking in well-made details such as a handrail along the rear standing area, which the Holy Father could hold on to while driving slowly through the crowd.

In 1975, Seat began the process of breaking away from Fiat, which is why the Technical Center increasingly worked on in-house developments. 1982 saw the appearance of the Ronda, a new model based on the previous Seat Ritmo. Together with Rayton Fissore, Seat had generously developed new components. Nevertheless, Fiat covered the Spaniards with plagiarism suits, which were finally impressively refuted in a court in Paris: Seat had all new parts on an otherwise black Ronda painted yellow to clearly show the judge, the lawyers and everyone else how much work was put into the car. In 1986, when the current Spanish King Felipe I came of age, Seat created a special Ibiza, which was given the nickname Rey (King). Two years before the launch of the Ibiza SXI, this model was equipped with a 100 hp four-cylinder engine with fuel injection, a dual-circuit brake with X-division and ventilated brake discs, a sports steering wheel, Recaro seats and air conditioning. Felipe is said to have liked the golden paint job and the rear spoilers very much.

Again and again there were considerations to tailor a Cabrio version from the first Ibiza, which enriched the compact car class from 1984. Giorgio Giugiaro and his colleagues at ItalDesign produced a drivable prototype for this. A special detail of this 2+2-seater was the absence of a rollbar. Series production was ultimately ruled out due to a lack of forecasted sales opportunities. Seat participated again and again in rallying and developed the Ibiza Bimotor in 1986. As the name suggests, this vehicle had two four-cylinder engines, each with a capacity of 1.5 liters, which were installed on the axles and together produced around 300 hp. In the Spanish Dirt Rally Championship, José María Servià took two second places with this unique vehicle. 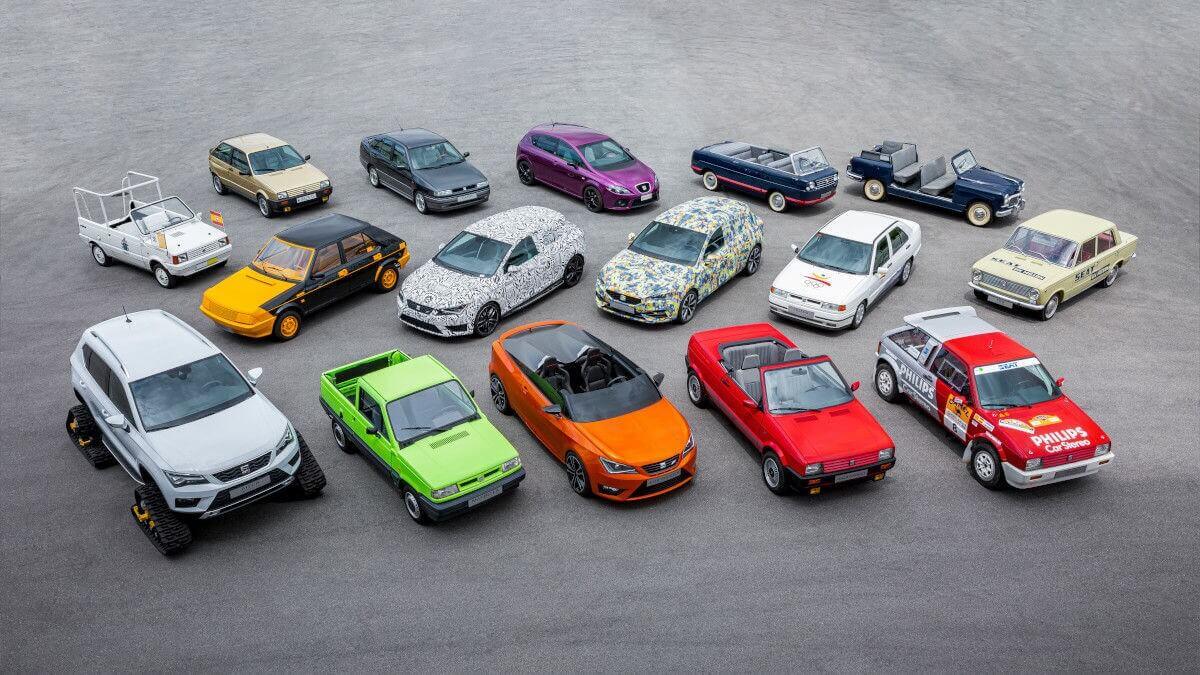 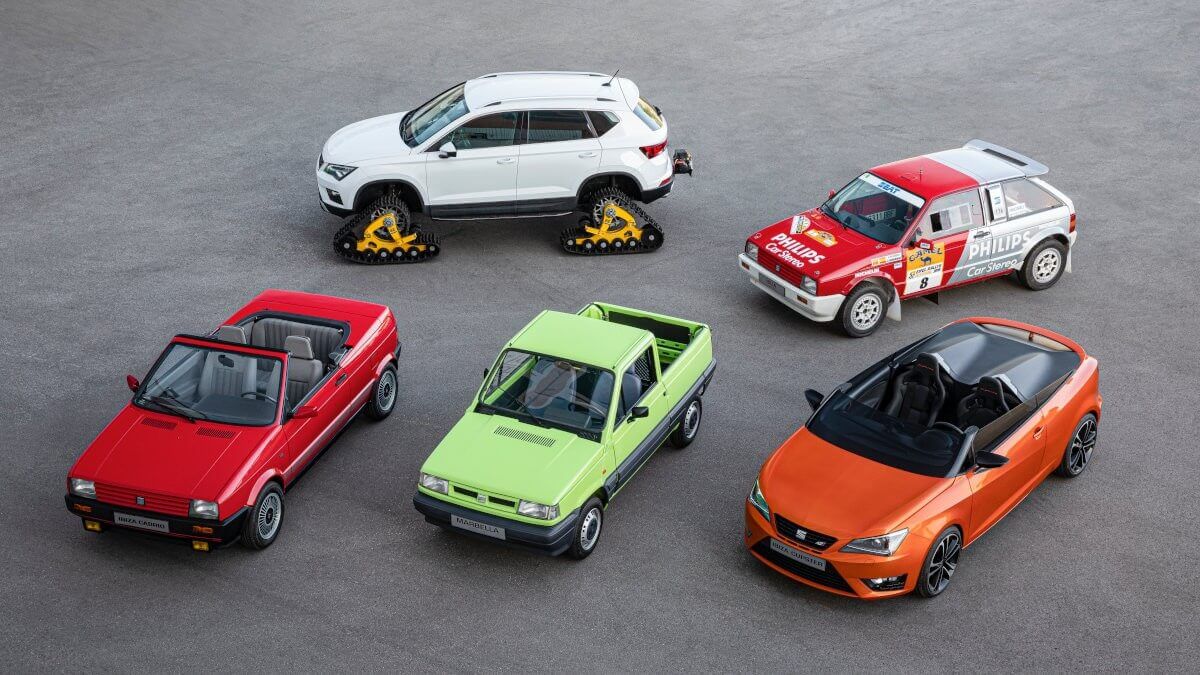 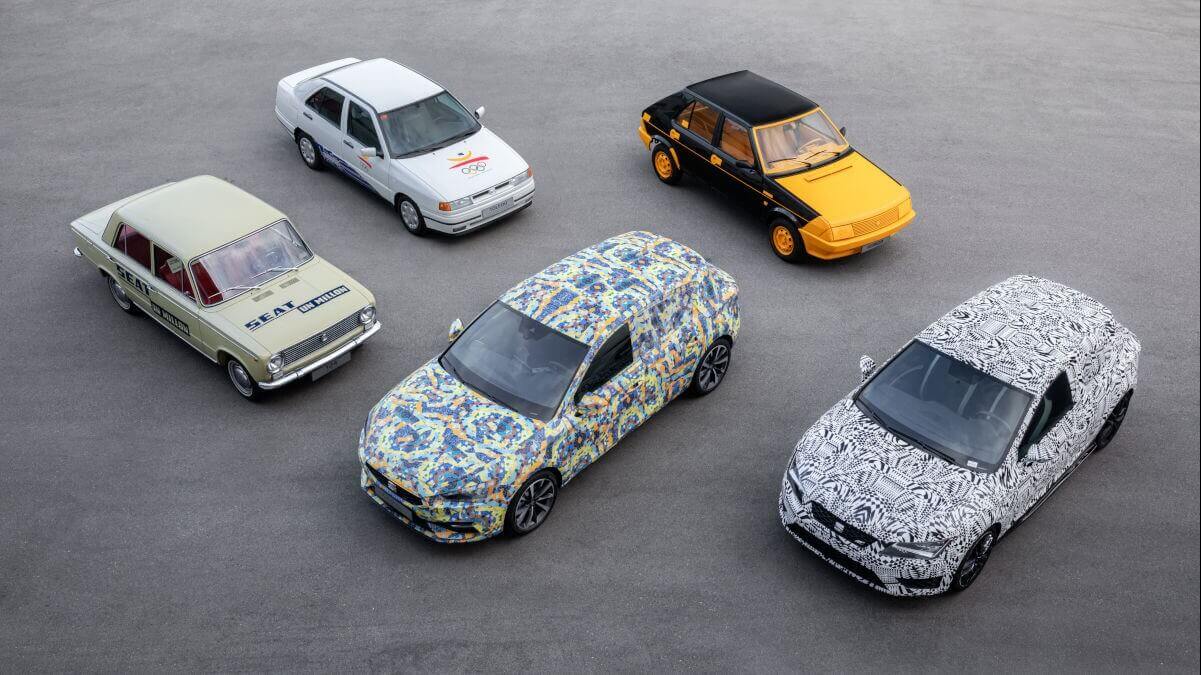 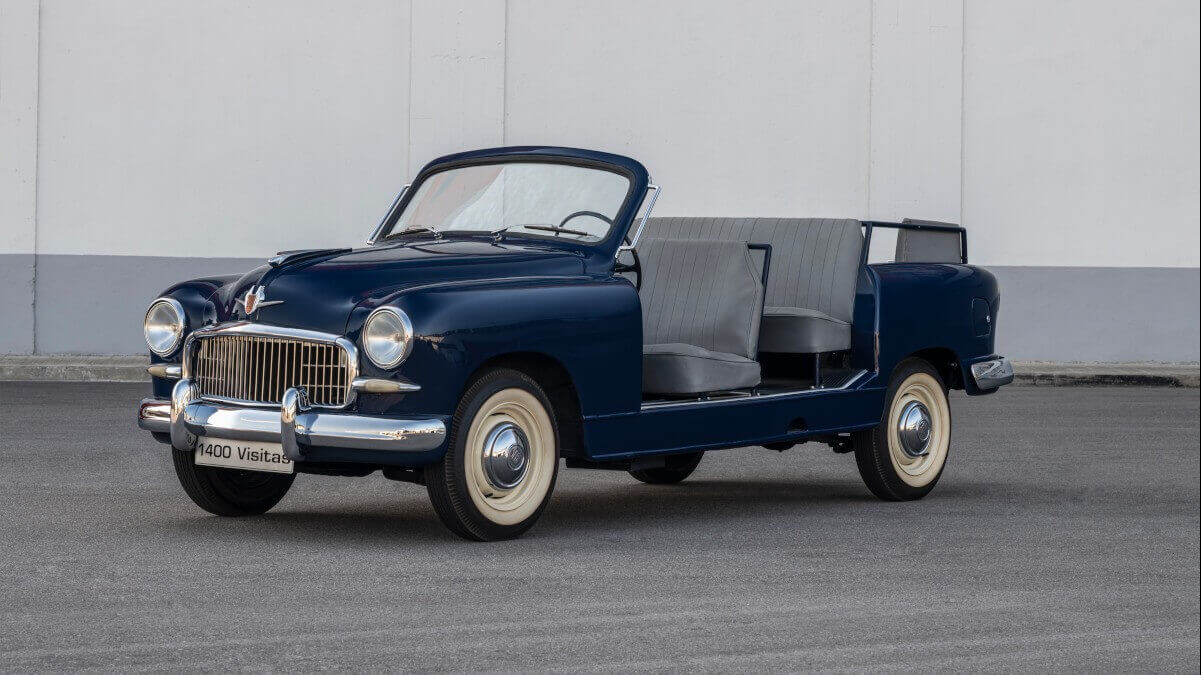 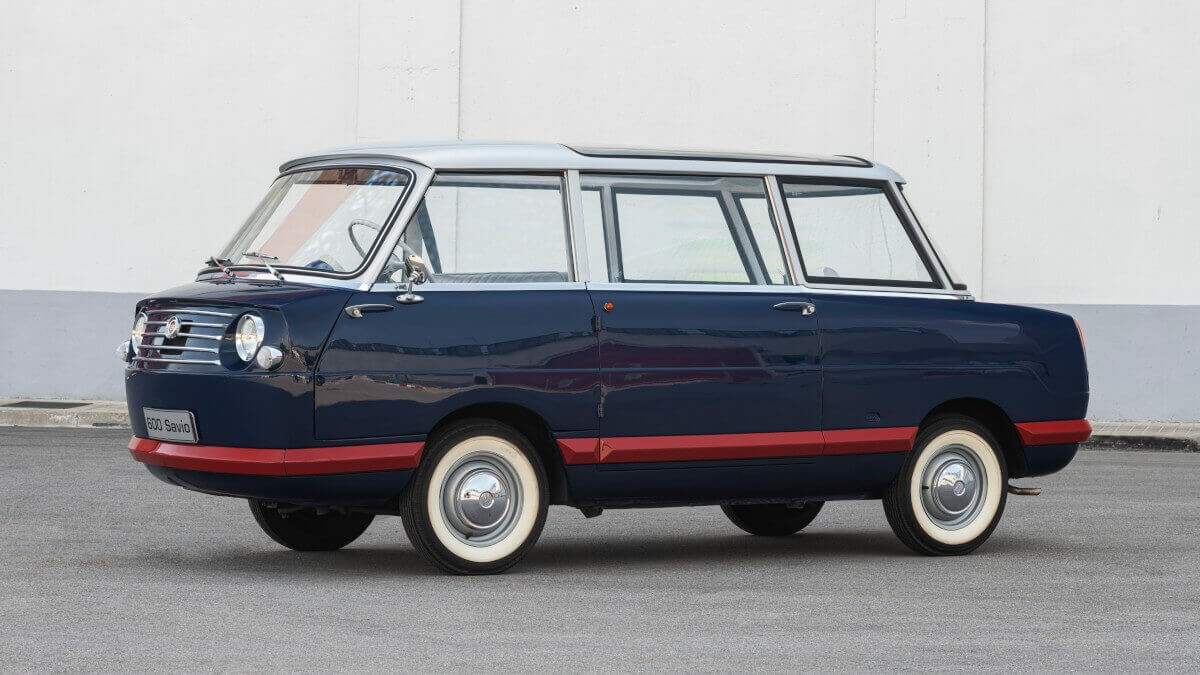 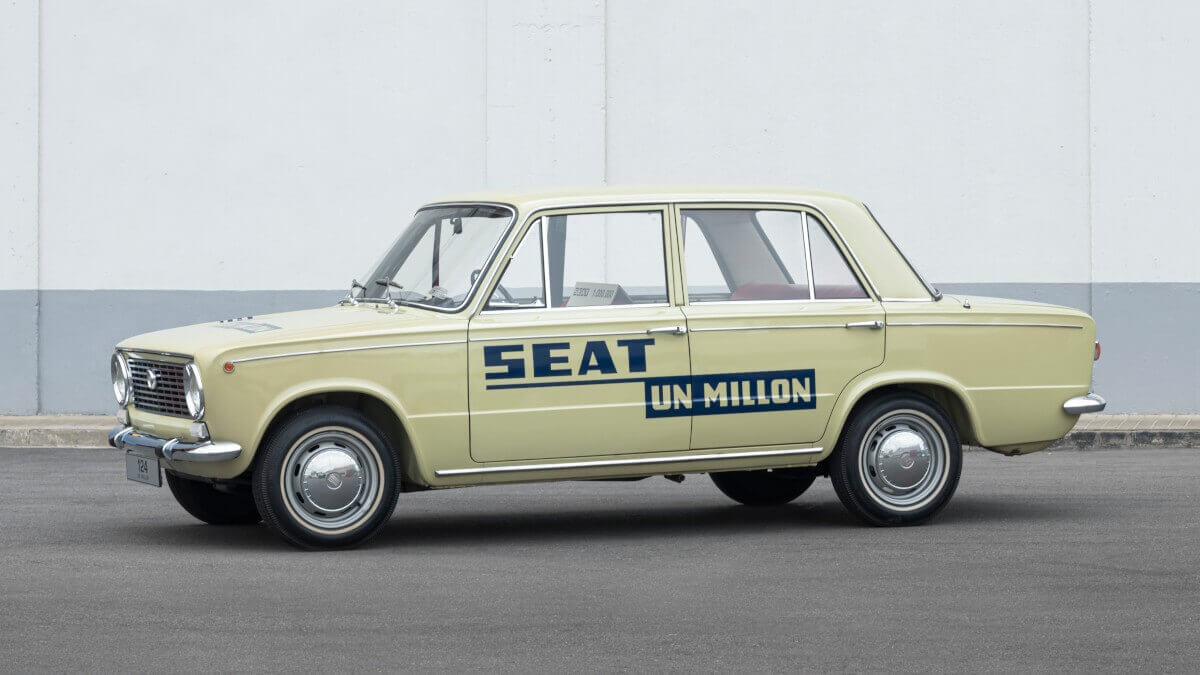 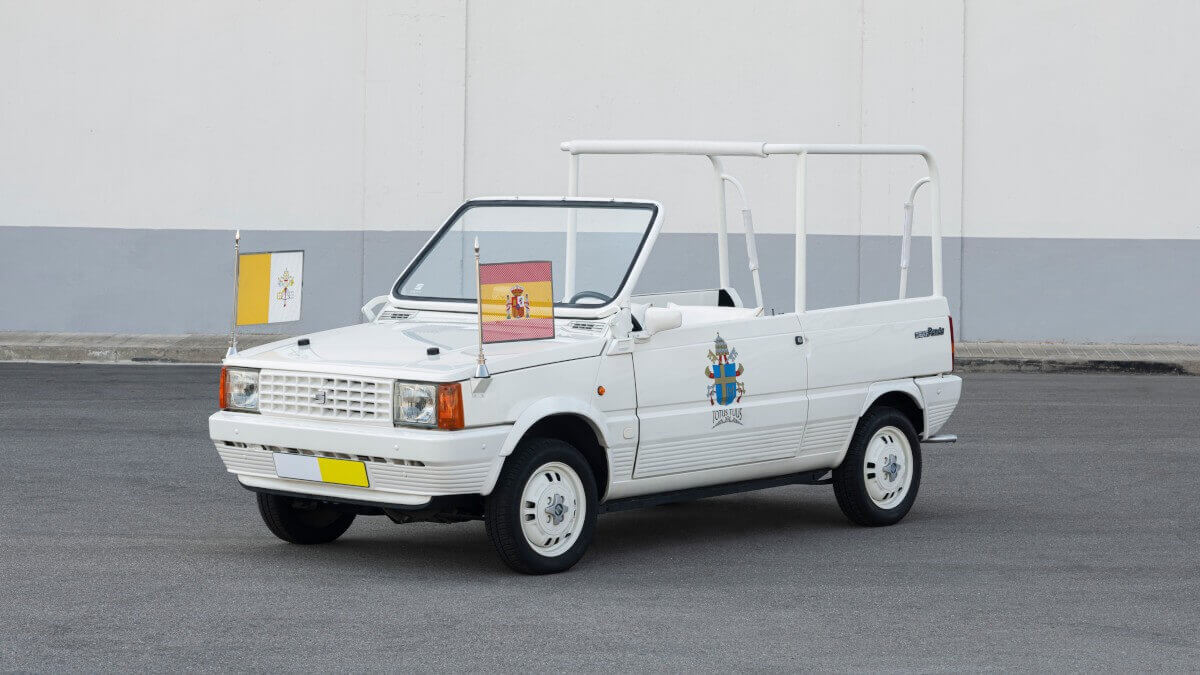 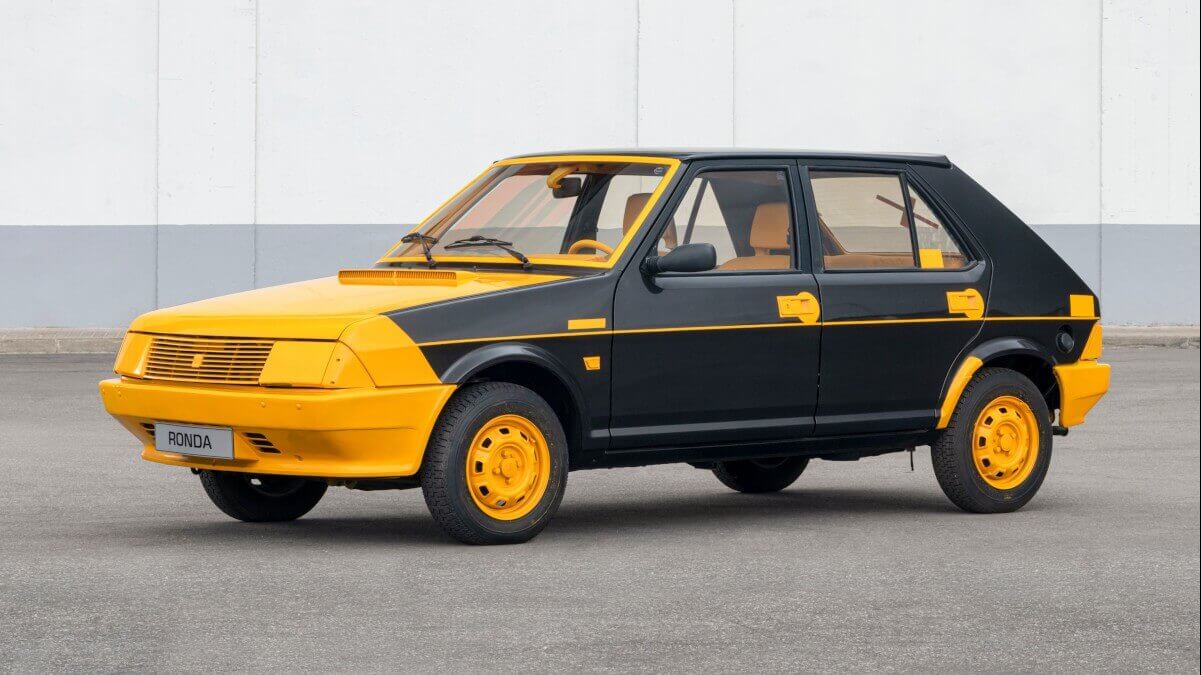 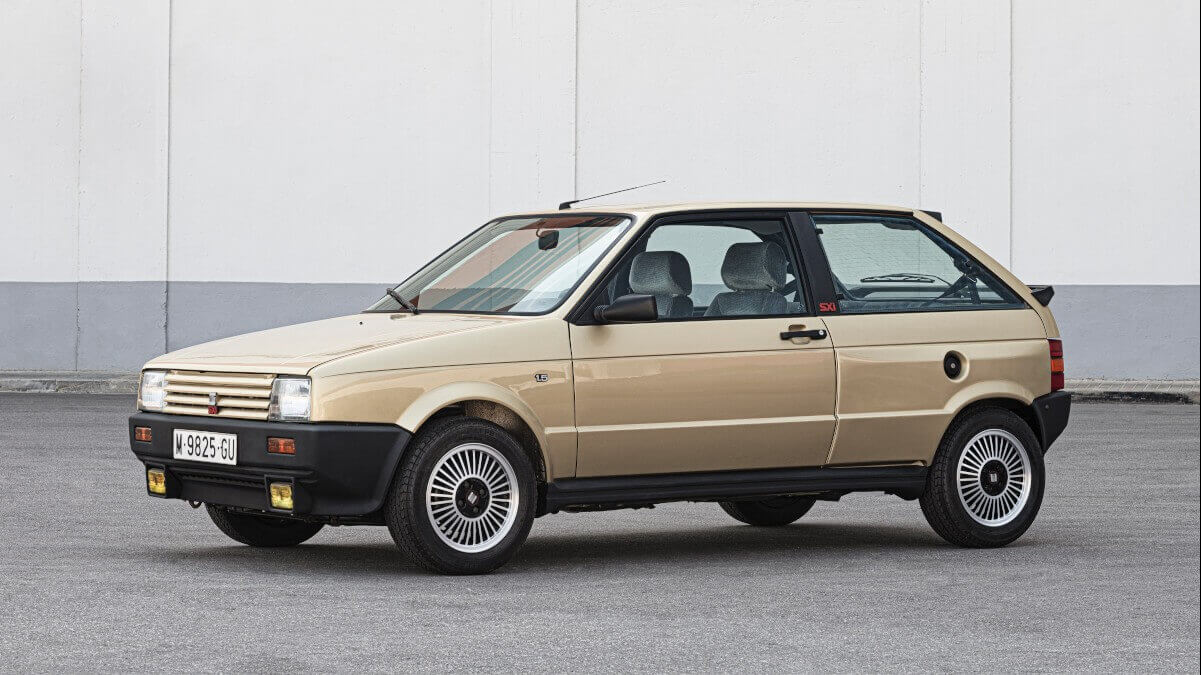 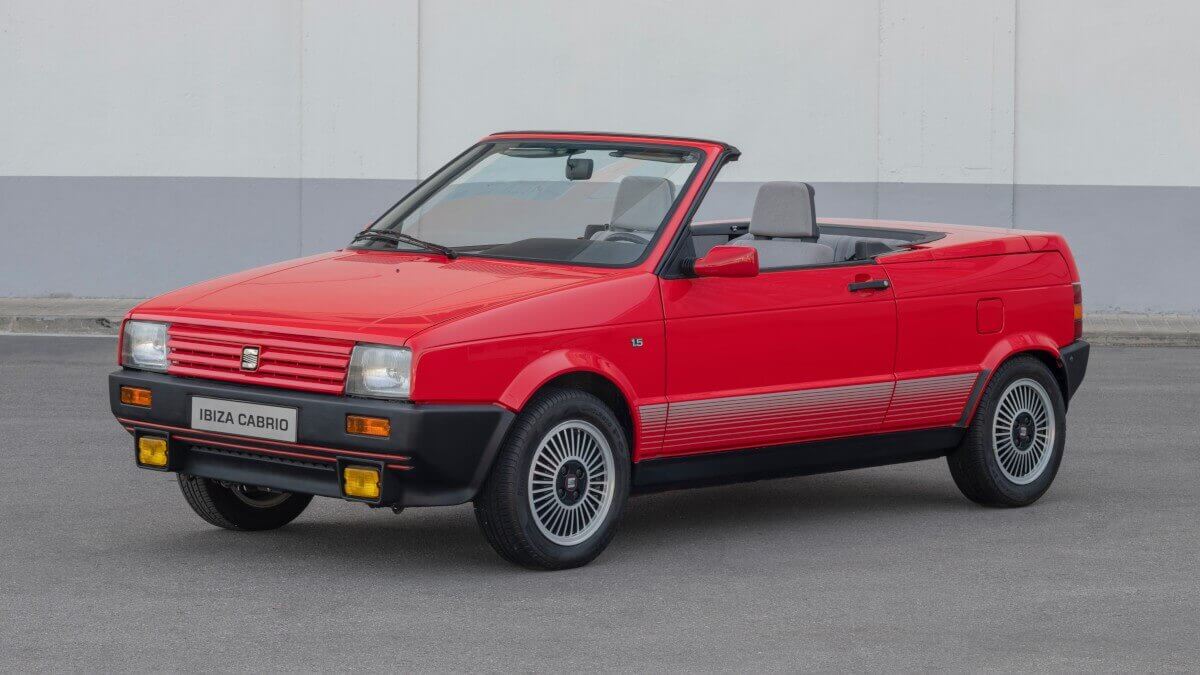 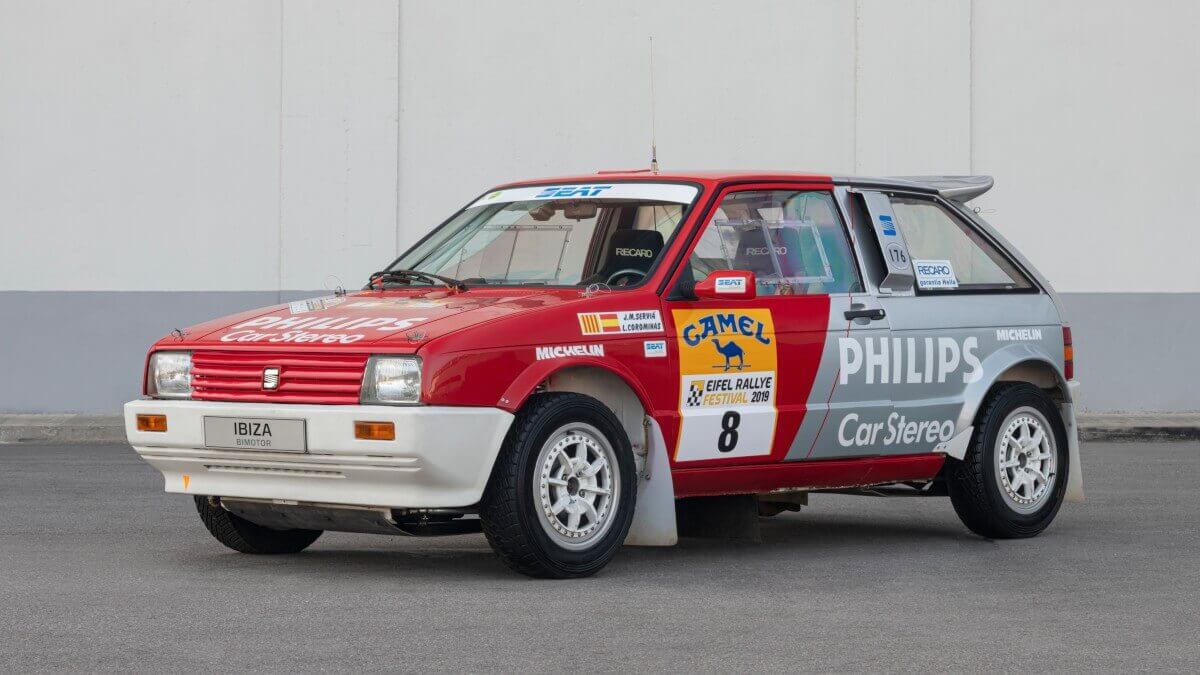 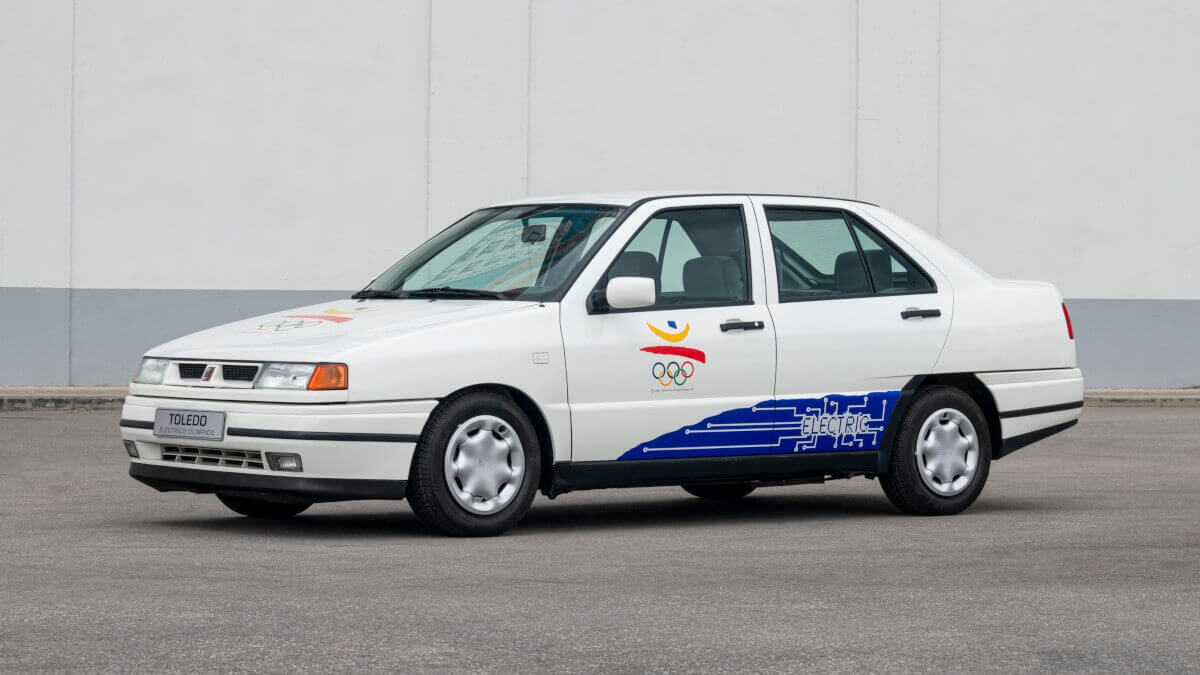 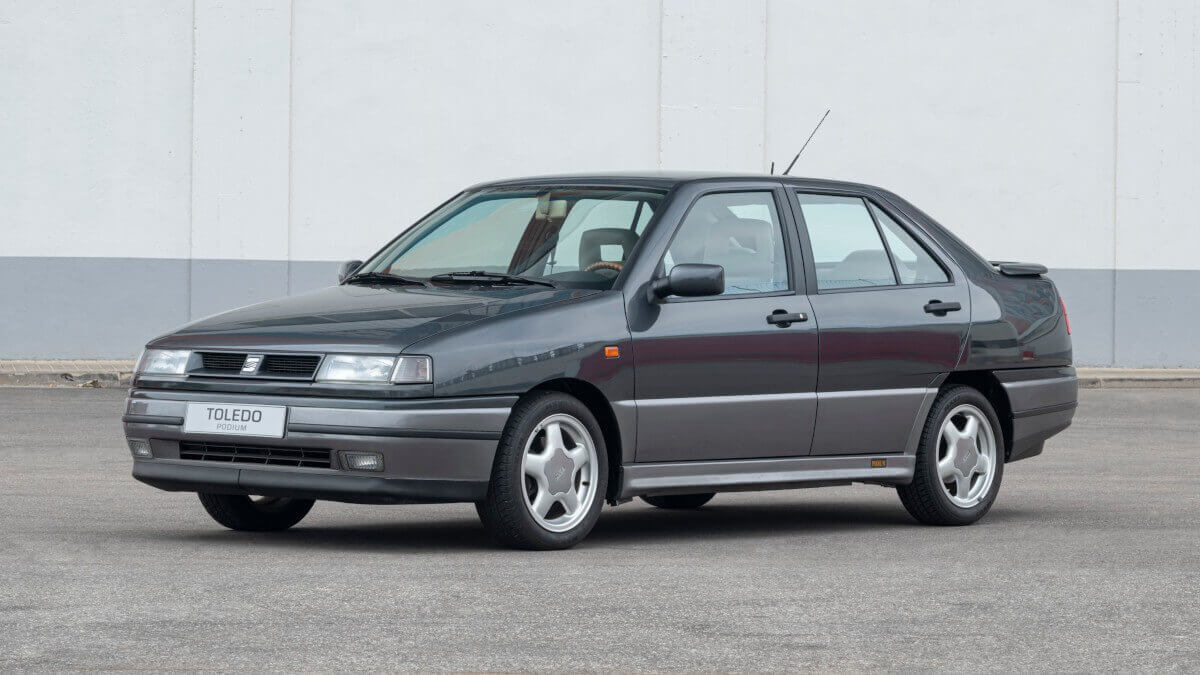 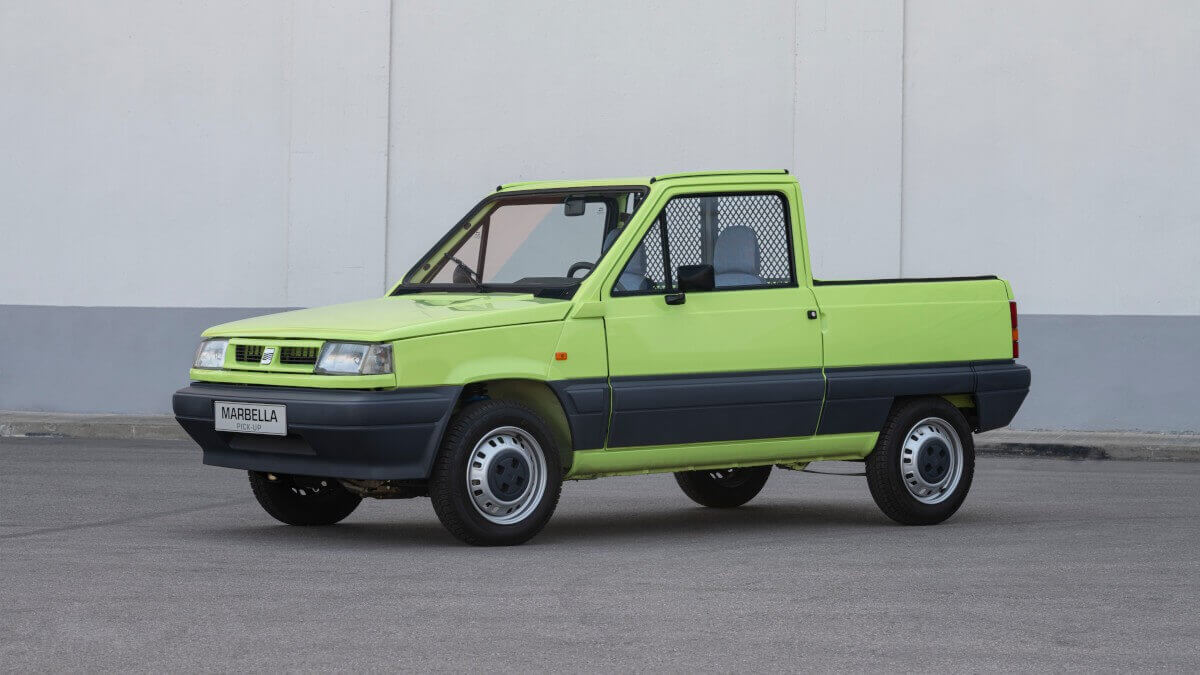 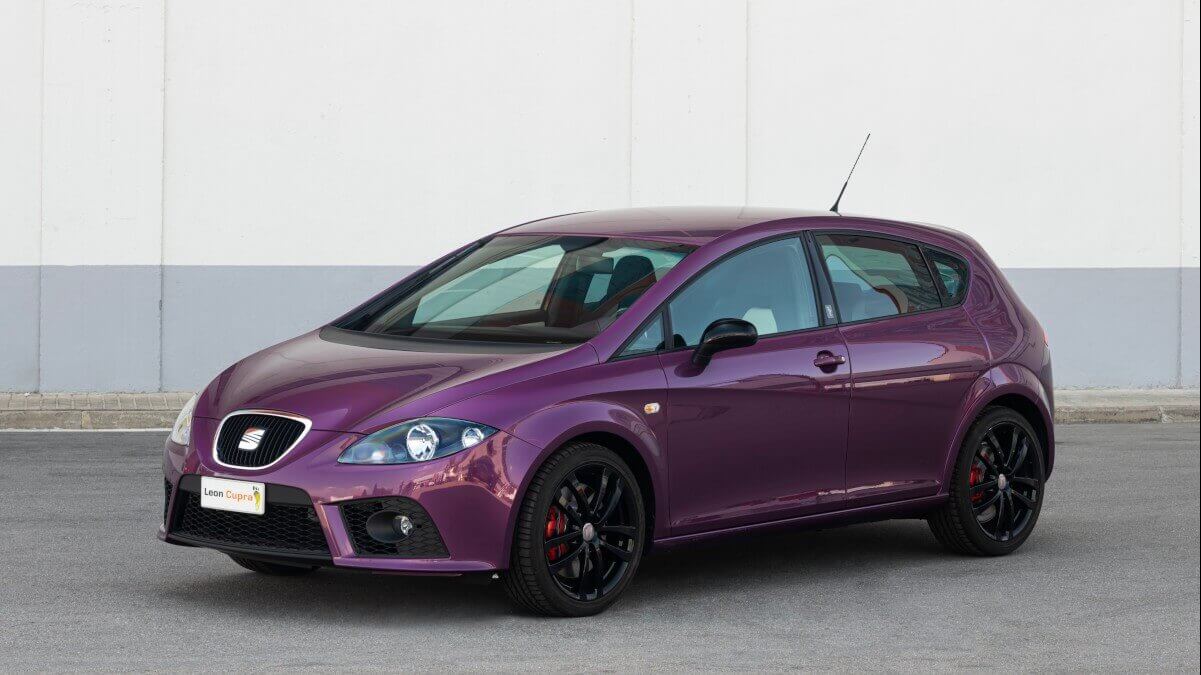 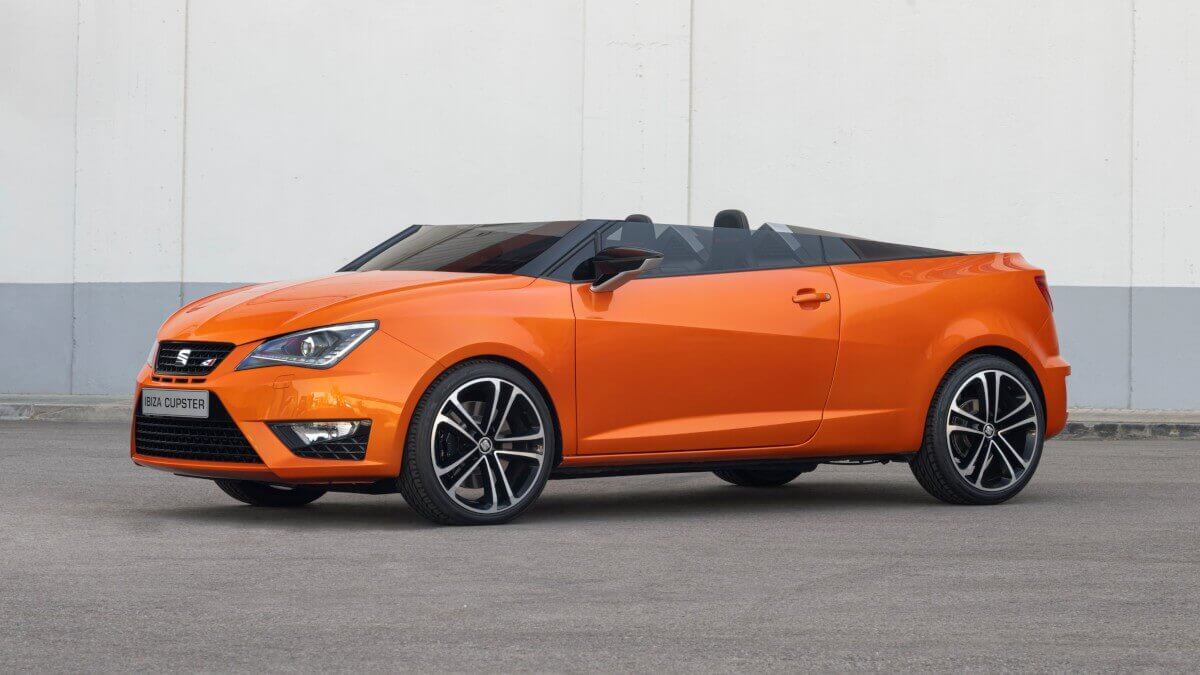 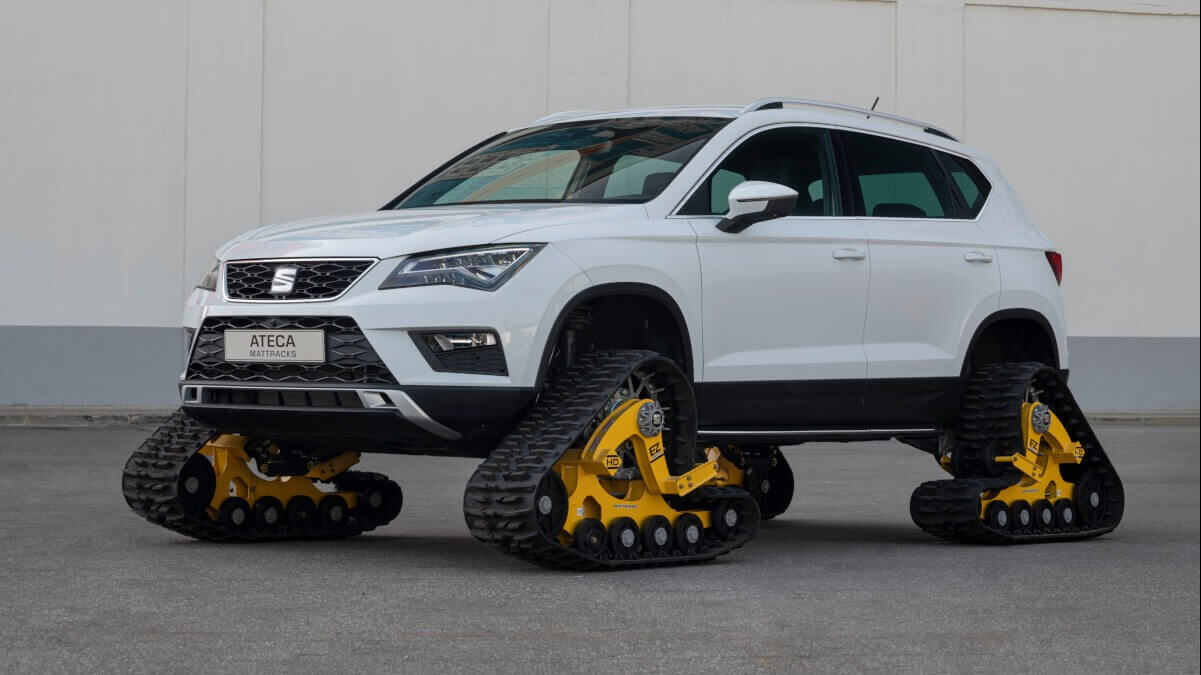 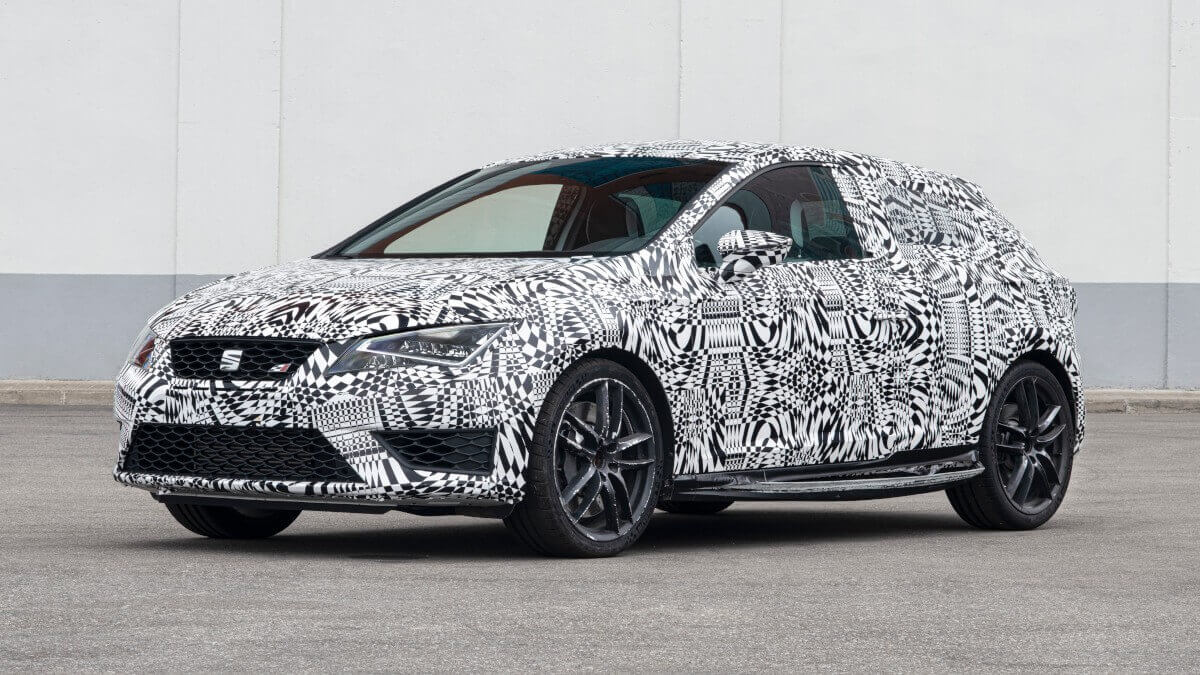 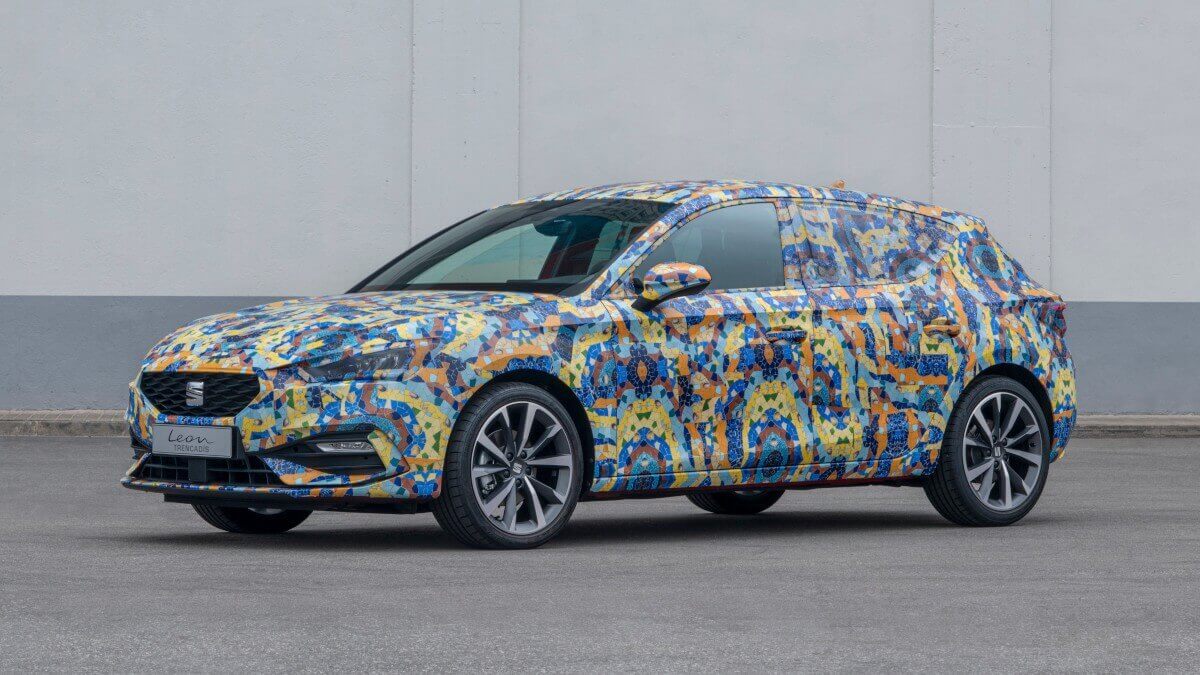 In 1992, Seat created the first purely electrically powered car in their history based on the first Toledo model generation. The 16 lead batteries were installed under the hood of the sedan, which together added more than 500 kilograms to the total weight of the Toledo. Nevertheless, they only offered an electric range of around 55 kilometers. However, the Toledo Electric was also only to be used as an escort vehicle for the torch relay at the start of the Olympic Games in Barcelona and for the marathon run over 42.195 kilometers on the last day of the event. It completed these tours without any problems. In addition, Seat offered a specially designed Toledo for each Spanish medal winner. A total of 22 medals were awarded to Spanish athletes, 13x gold, 7x silver and 2x bronze. However, the two-tone grey painted special model Podium with its luxurious cream-colored interior including fax machine and portable phone in the center armrest was created 23 times to add one car to the factory collection together with the Toledo Electric.

From the Fiat Panda the Spanish brand first constructed the identical Seat Panda and finally the independently modified Marbella. On this basis, they not only developed the small van version Terra, which went into production, but also a Pick-Up version with a loading area, which was only separated from the cockpit by a separating grid. In the early 2000s, the Colombian singer Shakira created a special Leon Cupra for the benefit of the foundation ‘Pies Descalos’ (barefoot), which supports homeless and disadvantaged children in Latin America. In addition to the purple coloring on the outside and inside, the two cars created also received an autograph of the artist on the hood. One of these was auctioned off at a fundraising event, the second went into the Seat car collection.

Around 30 years after the ideas for the Ibiza Cabrio (see above), a concept car was created in 2014 with the Ibiza Cupster, which went even further. Only two seats, a significantly shorter windscreen and a grey cover with two scoops behind the seats made this vehicle a pure speedster, which was once again denied a (small) series production. On the occasion of the ‘Ateca Snow Experience’ Seat in 2017 introduced the Ateca ‘Mattracks’, which has caterpillar tracks in the wheel arches instead of normal wheels. These not only raise the vehicle’s height, they also give it more grip on snow, ice and mud. They are even approved for road traffic, but weren’t included in the special options program of the production car.

With factory driver Jordi Gené behind the wheel, Seat achieved a new lap record for front-wheel drive vehicles on the Nürburgring Nordschleife in 2014 – under eight minutes for the first time. A Leon Cupra SC 280 with Performance Pack was under the camouflage, covering the 20.83 kilometers of the Eifel race track in 7:58,44 minutes. For the recently presented new Leon, Seat used a camouflage foil inspired by the mosaic technique ‘Trencadis’ by Spanish artist Antoni Gaudí. In this way, the new shapes were cleverly concealed and at the same time some kind of an Art Car was created.