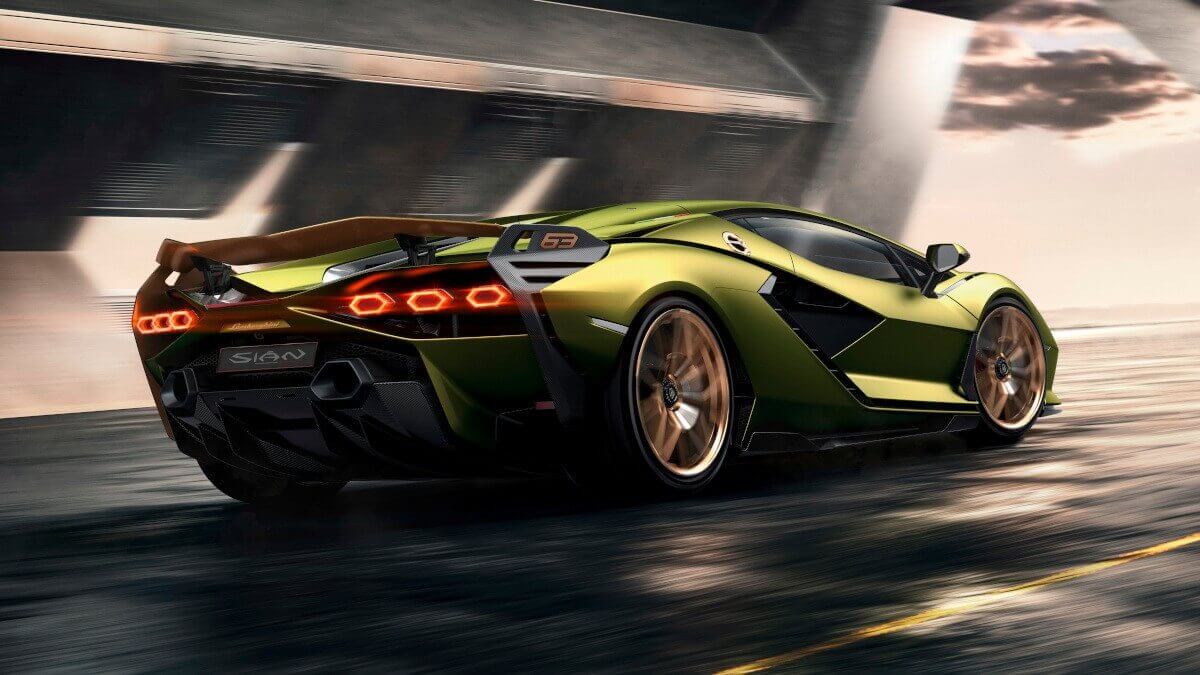 It becomes a dear habit that Lamborghini presents limited special edition models at the top of their model range about every two years. It all began in 2007 with the Reventón, which rolled off the production line in 20 units as a Coupé and from 2009 in another 15 units as a Roadster. In 2013, three Veneno Coupés followed and nine Veneno Roadster from 2015, finally followed by 20 Coupés and Roadsters each of the Centenario in 2016 and 2017. Now, with a little more distance, the next member of this series is in the starting blocks. The brand from Sant’Agata will be presenting the new Sián at the IAA (Frankfurt Motor Show), which is otherwise expected to be quite uneventful this year. Surprisingly, the new Sián is already sold out before its world debut although it is this time limited to 63 units worldwide. In contrast to all predecessor models, the Sián will be equipped with a hybrid drive for the first time in the brand’s history. Only the Asterion LPI 910-4 concept car from 2014 showed a naturally aspirated V12 engine in combination with an additional electric drive system. At that time, however, the official statement was: “We will never build a hybrid sports car in series production”. Never just takes five years in Italy as it seems.

When integrating the hybrid system, great importance was attached to high performance in combination with the lowest possible additional weight. A 34 hp 48-volt electric motor was installed in the transmission to improve the response in low rev ranges. It is directly connected to the drive shaft and thus enables purely electric parking manoeuvres and electric manoeuvring at low speeds. Otherwise the power is available at speeds below 130 kph (81 mph) as an additional boost. Lamborghini draws the power required for this electric motor from a new regenerative braking system and then charges it not in a lithium-ion battery but in a supercapacitor with ten times the power of the system in the Aventador S. Compared to a battery of the same weight, the supercapacitor offers three times the power and can also be charged and discharged just as quickly. It is housed in the partition wall between the cockpit and the combustion engine to ensure a good weight distribution between front and rear. The capacitor and electric motor together weigh only 34 kilograms. In combination with the naturally aspirated V12 engine, the Sián driver has 602 kW/819 hp under his right foot. Of these, 577 kW/785 hp come from the classic twelve-cylinder engine alone. Lamborghini promises a topspeed of more than 350 kph. Acceleration from standstill to 100 kph takes less than 2.8 seconds. Compared to the Aventador SVJ, it goes from 30 to 60 kph two tenths of a second faster and from 70 to 120 kph even 1.2 seconds faster. 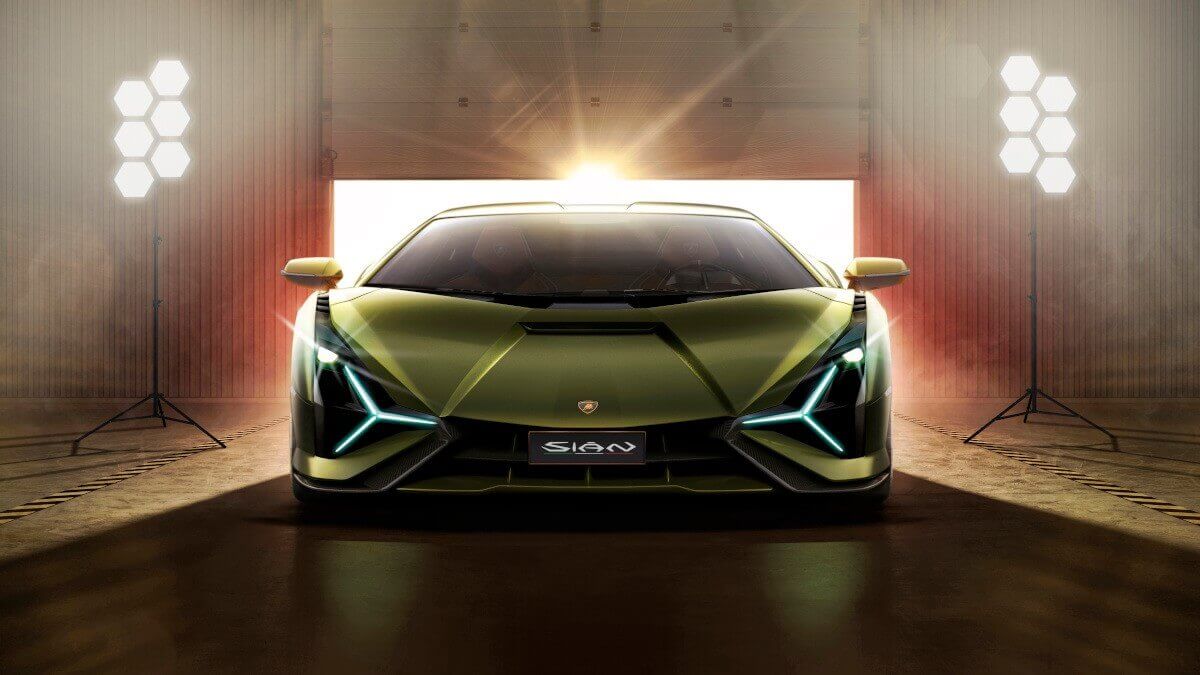 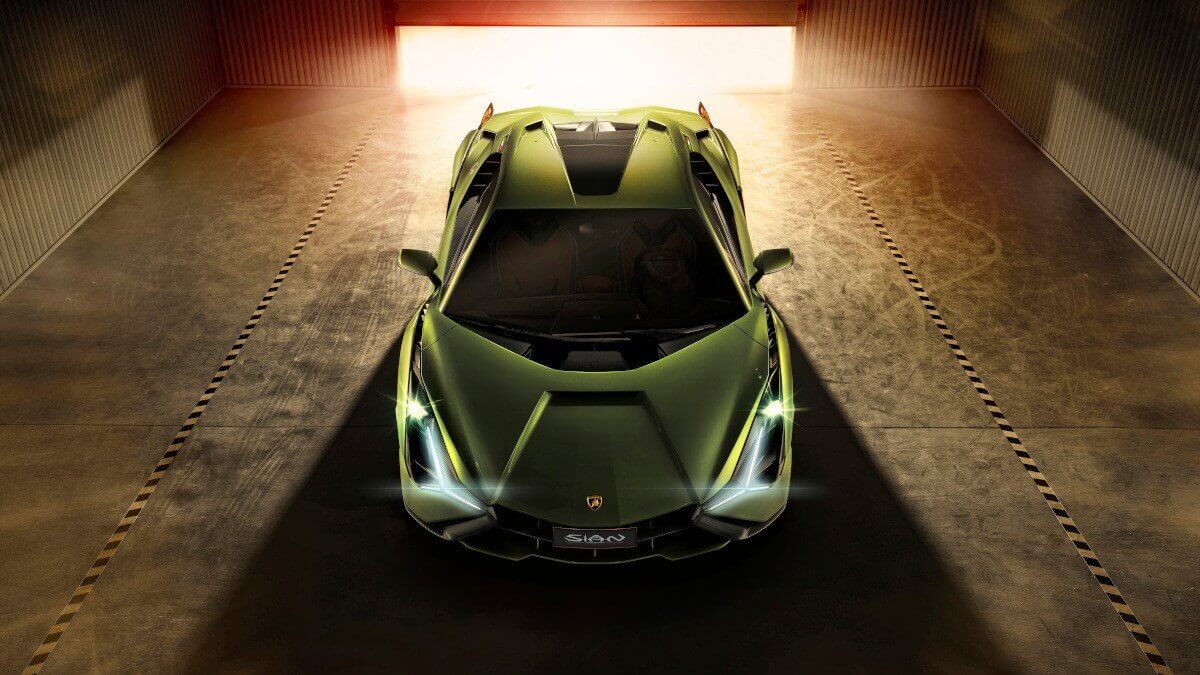 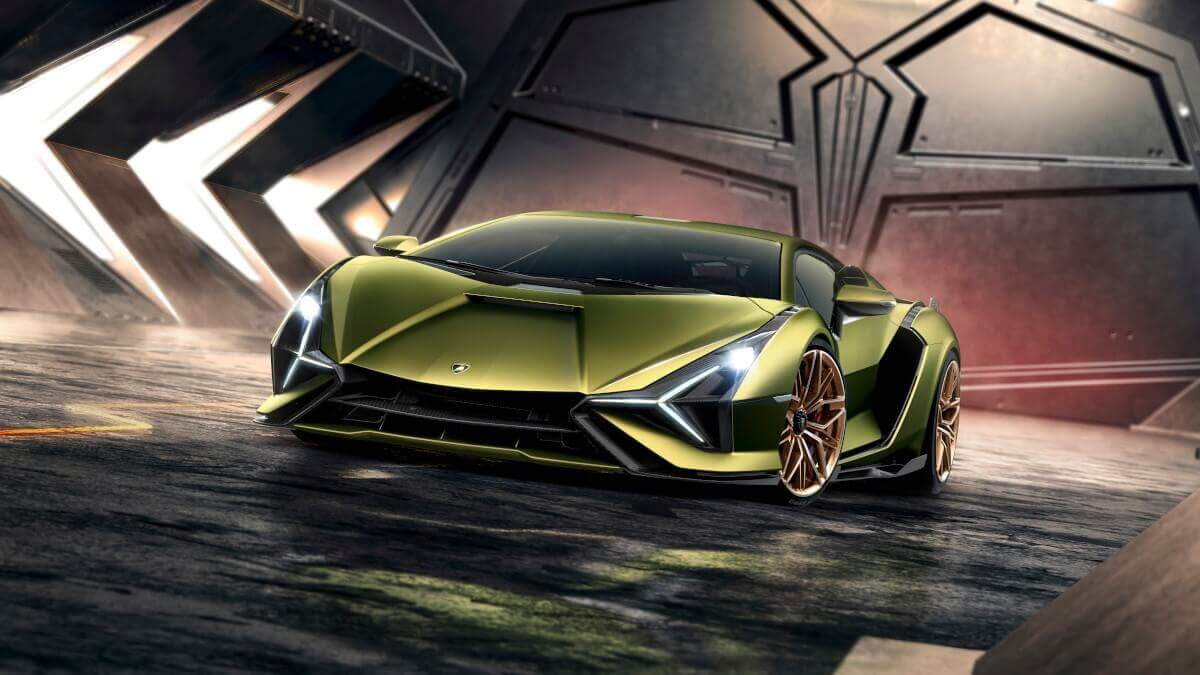 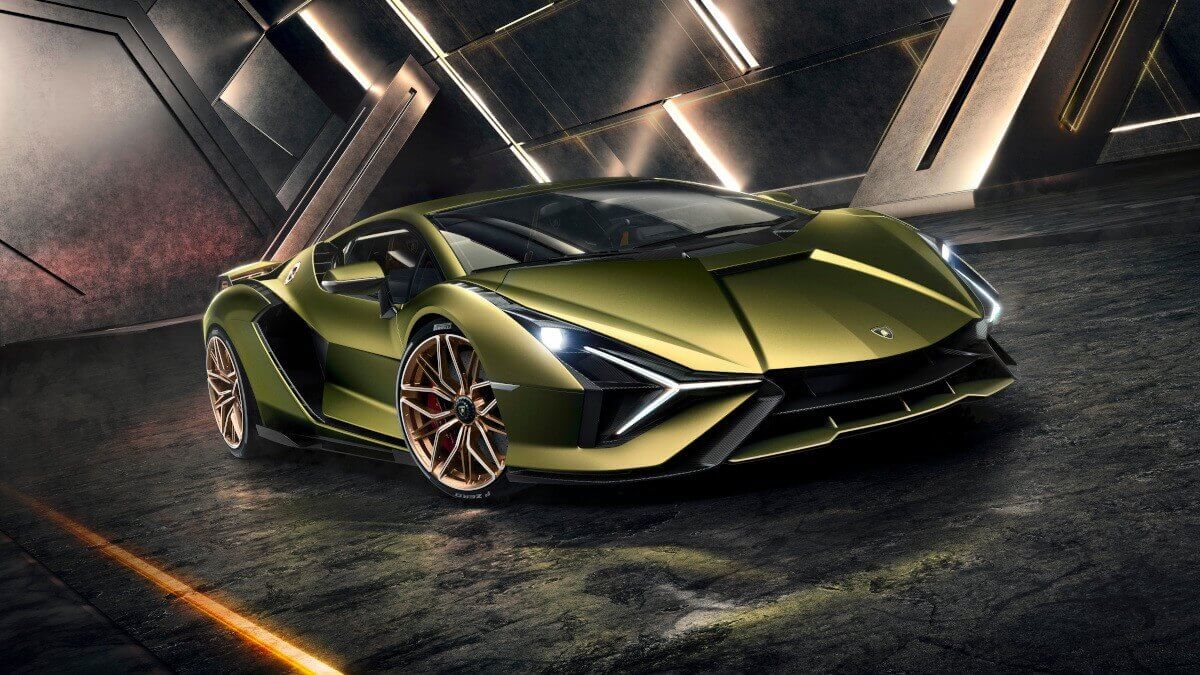 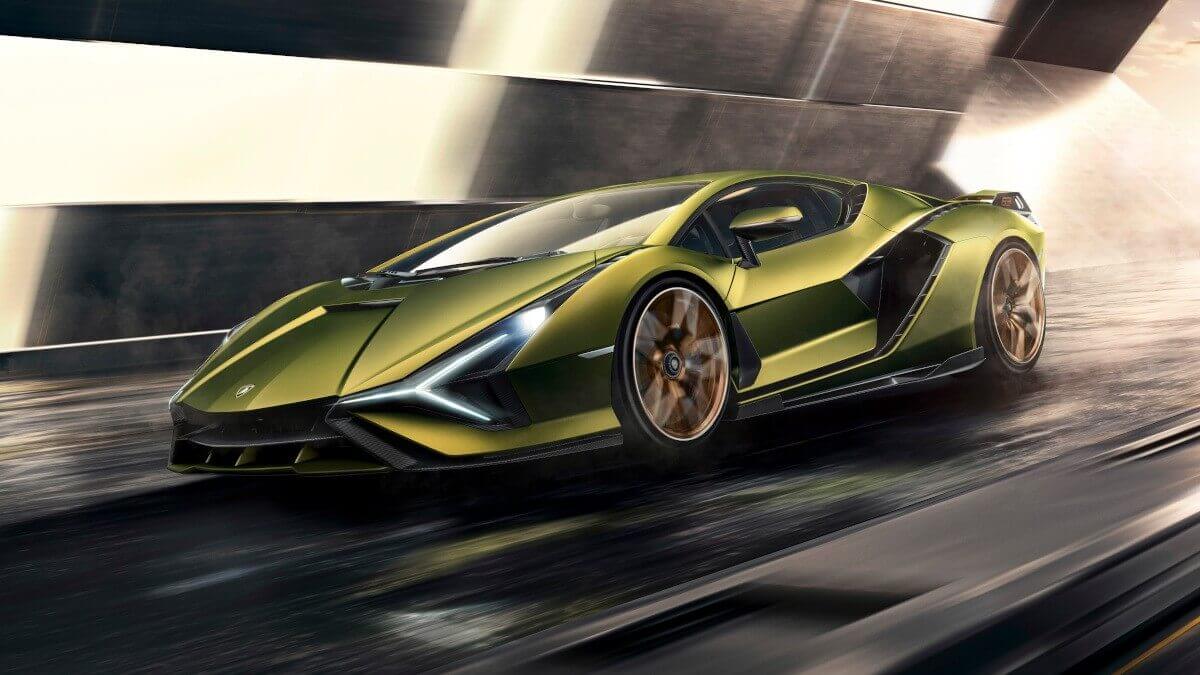 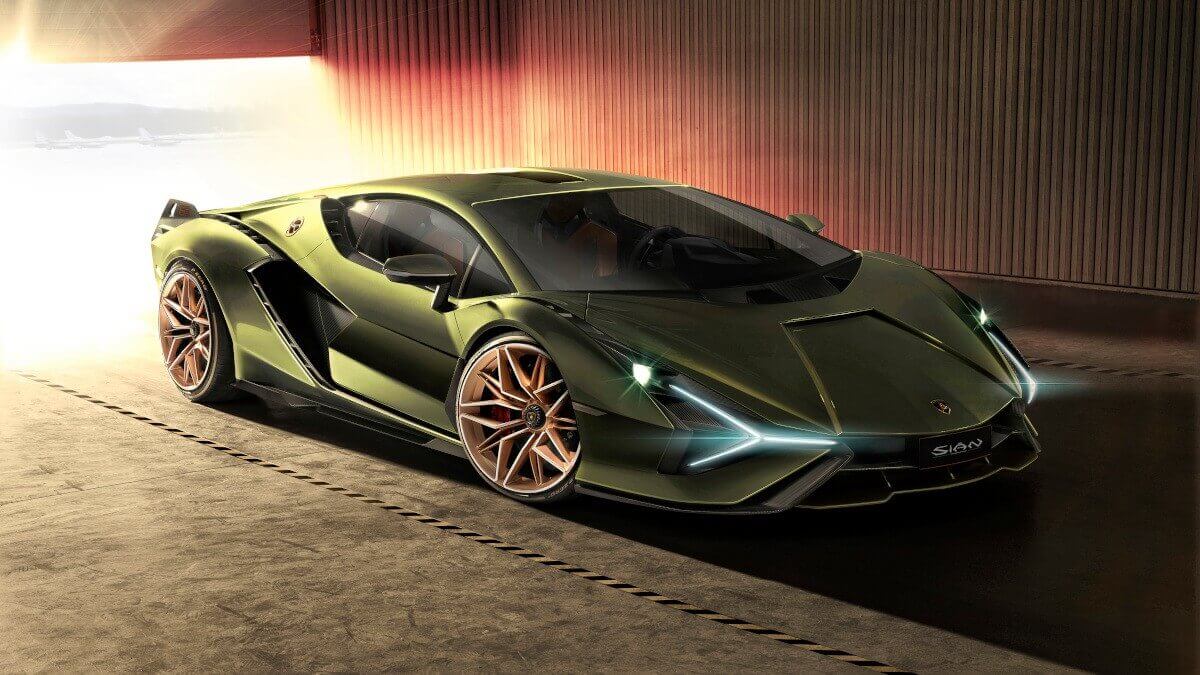 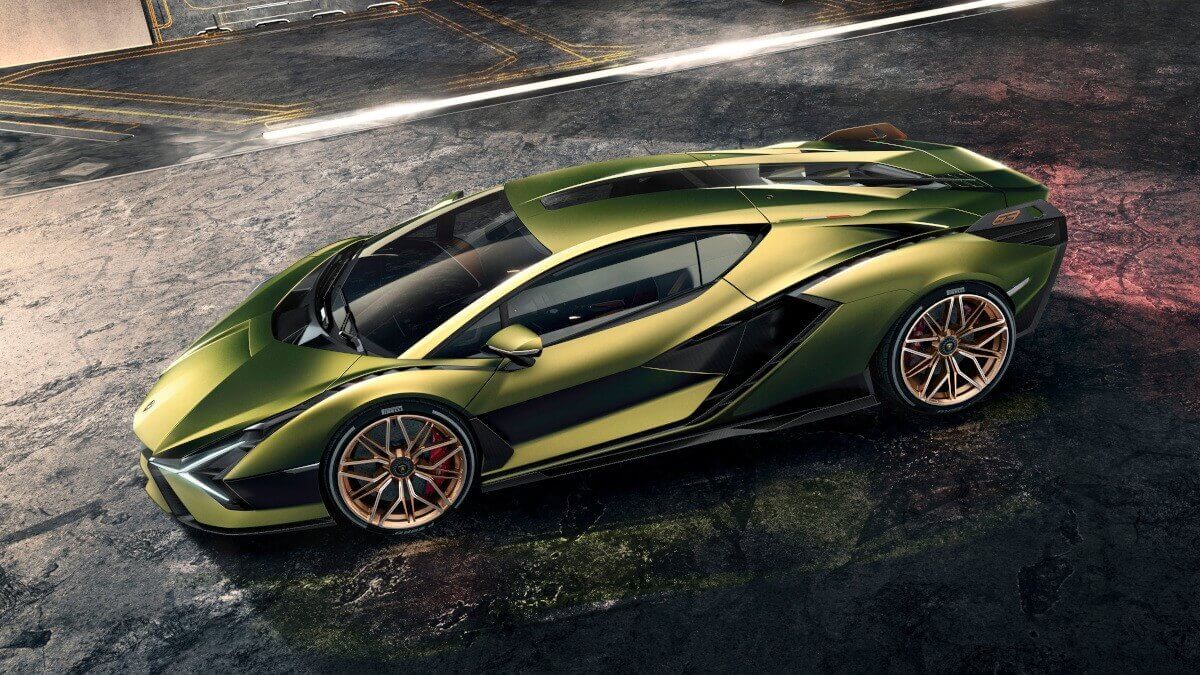 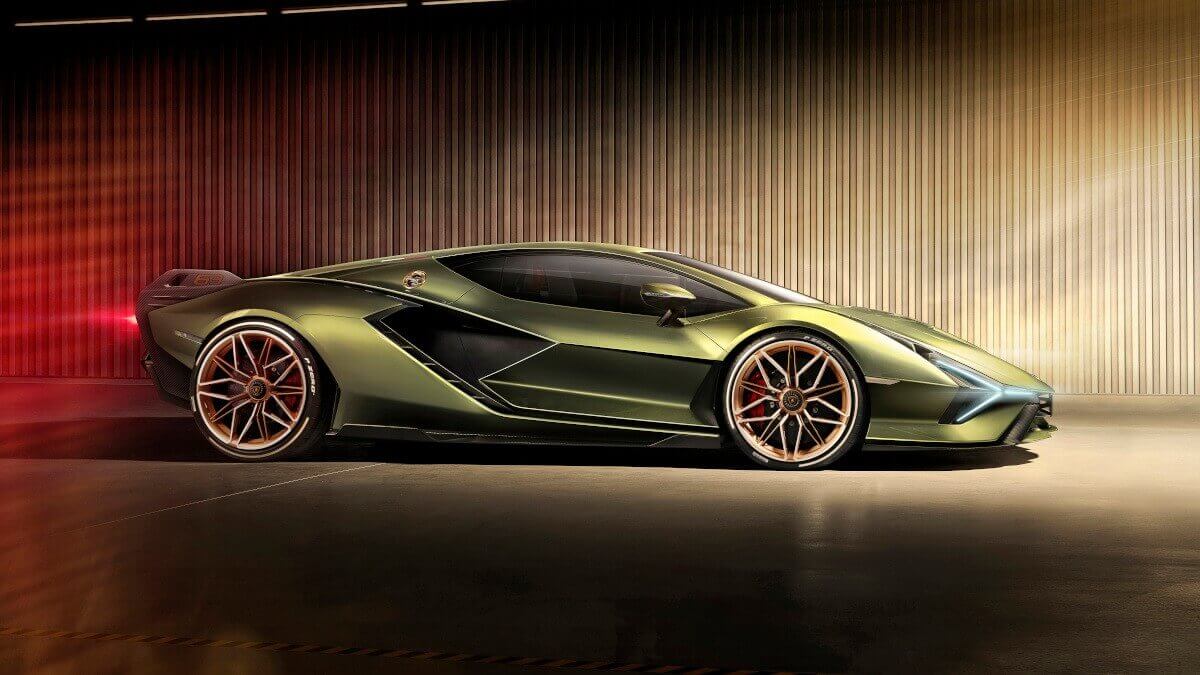 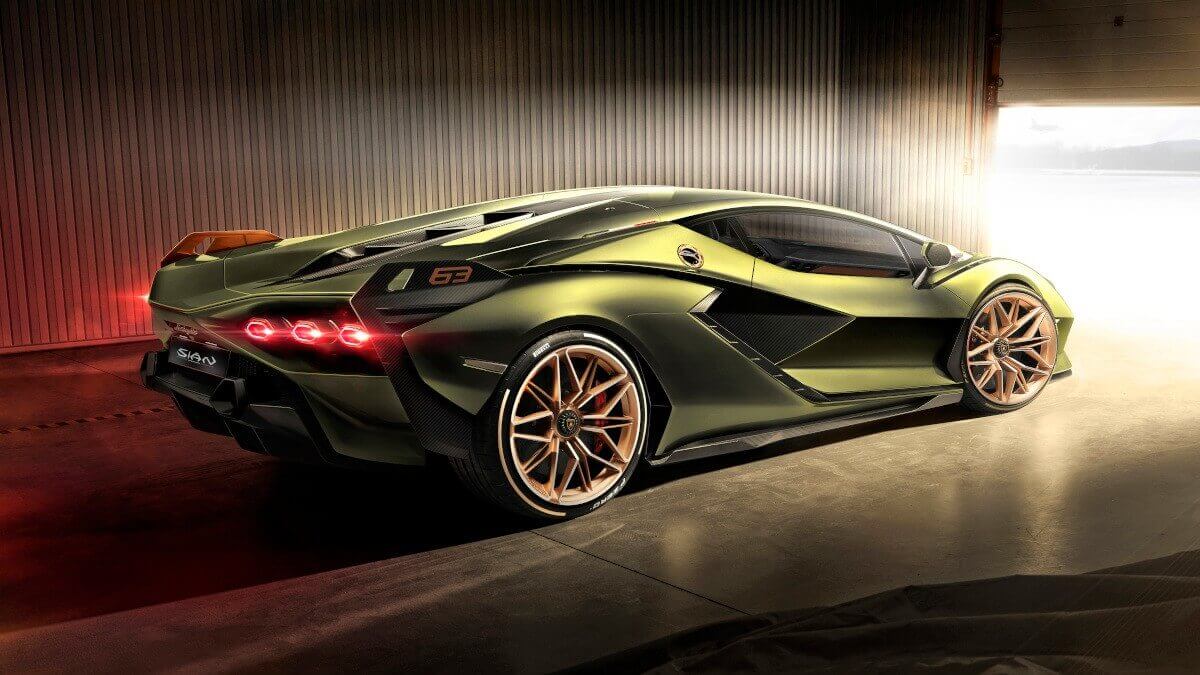 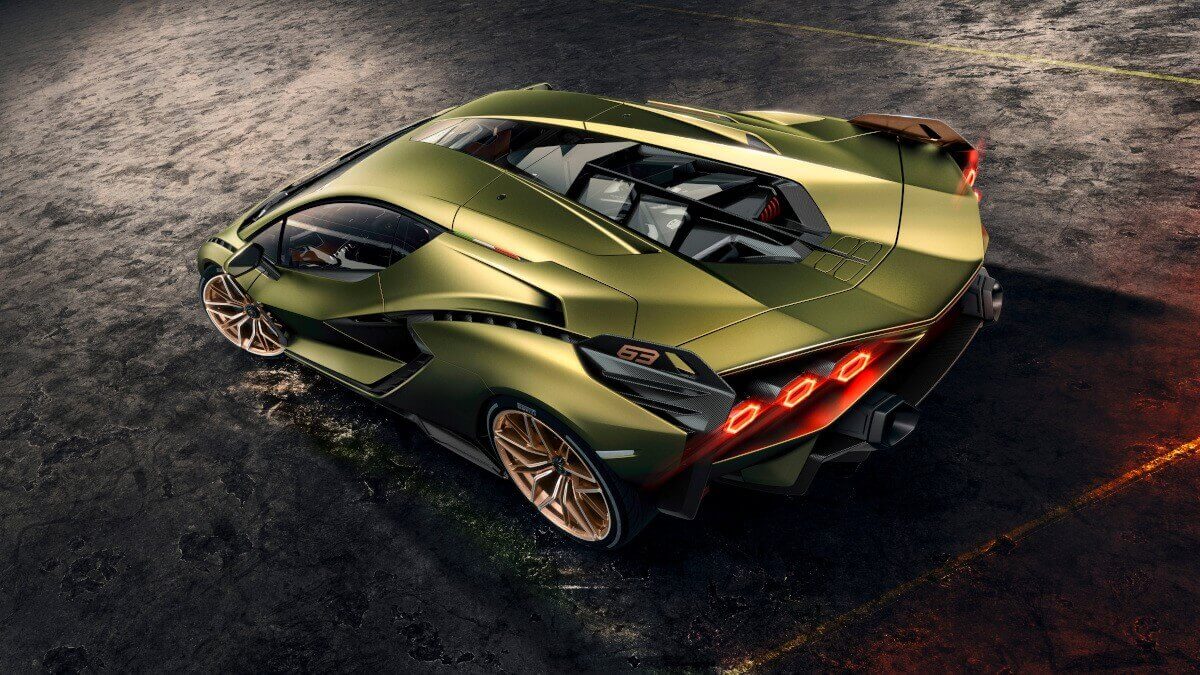 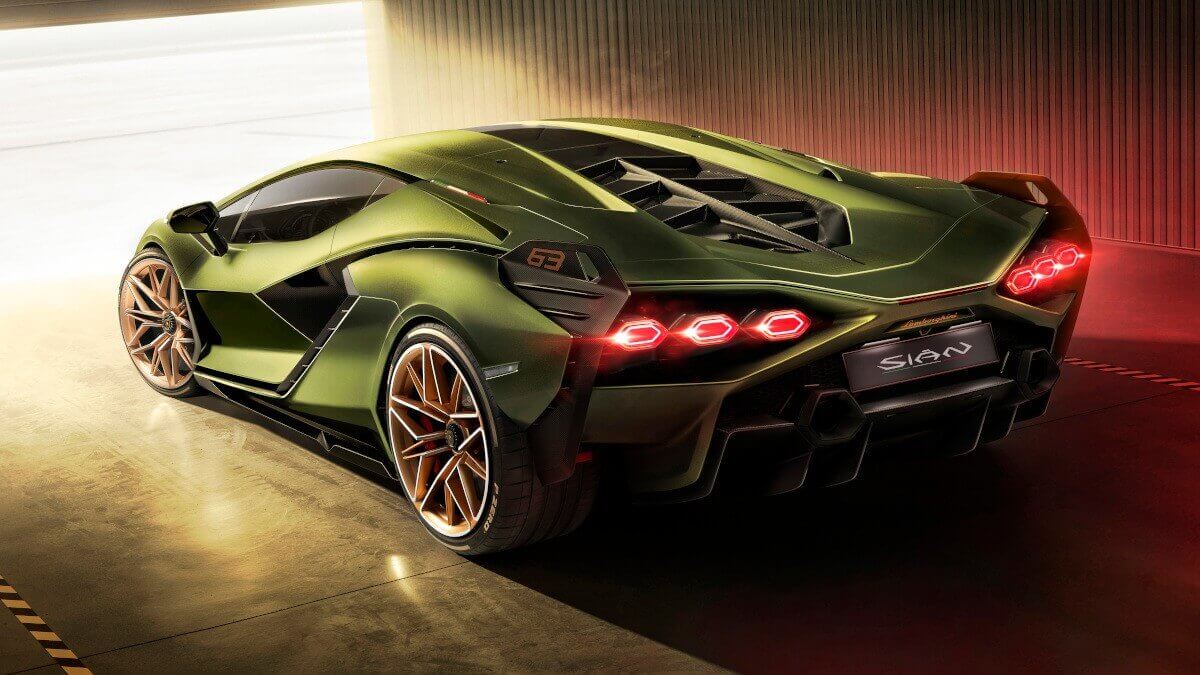 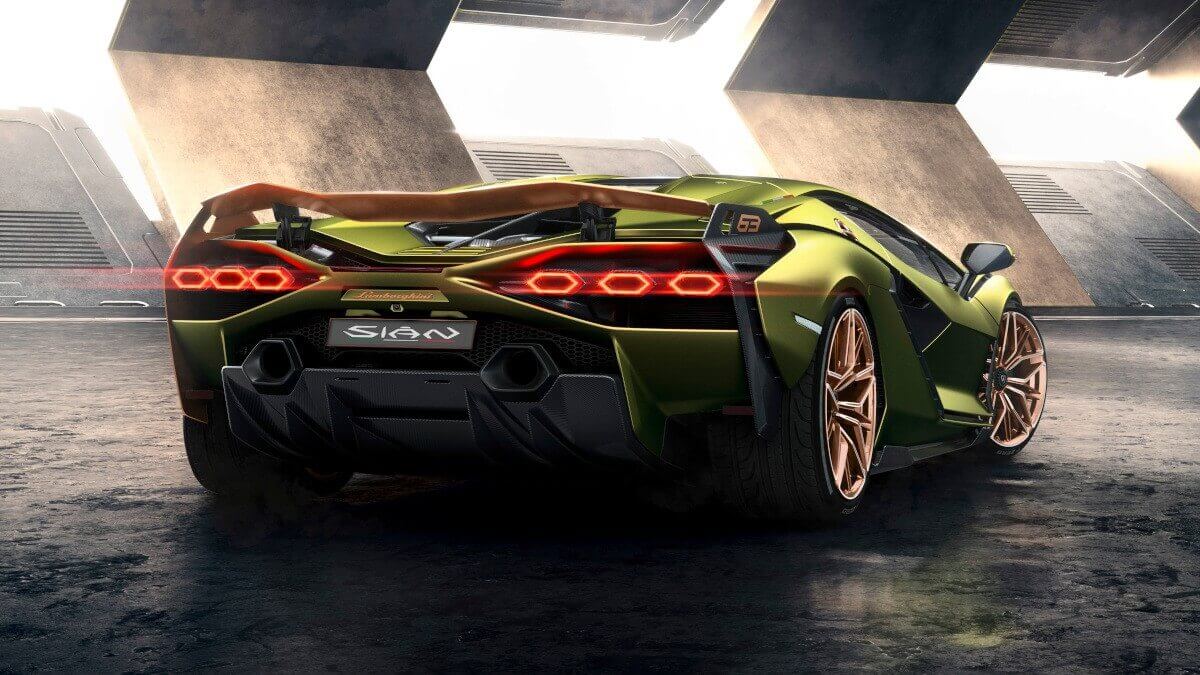 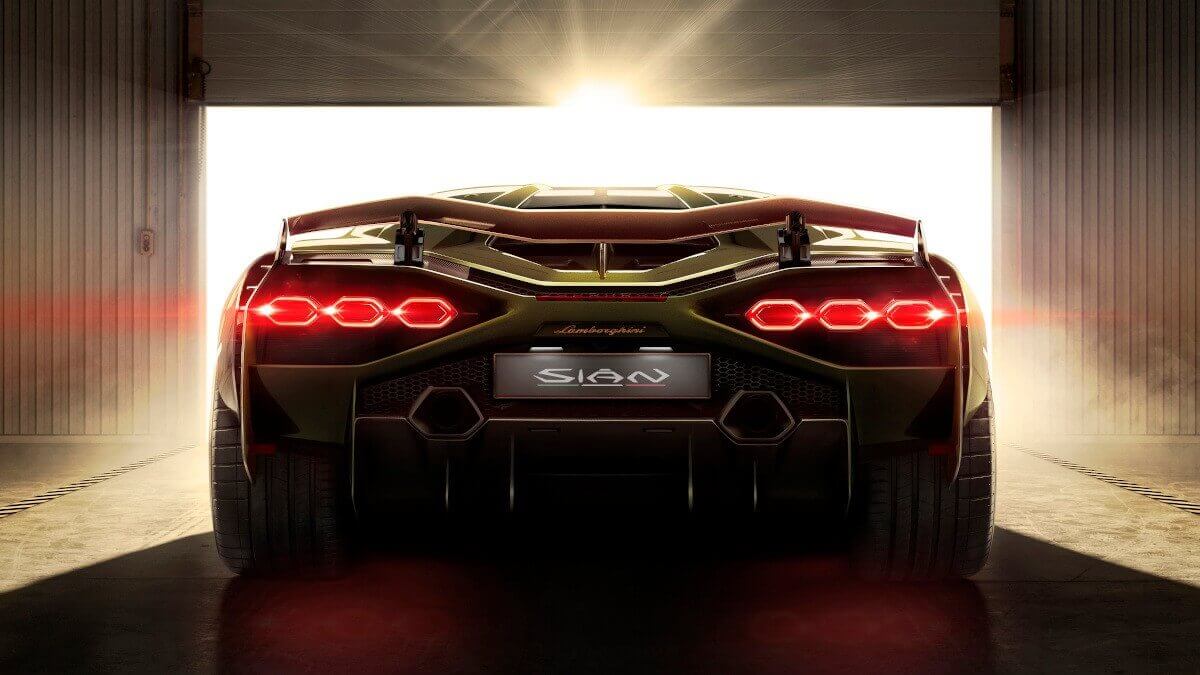 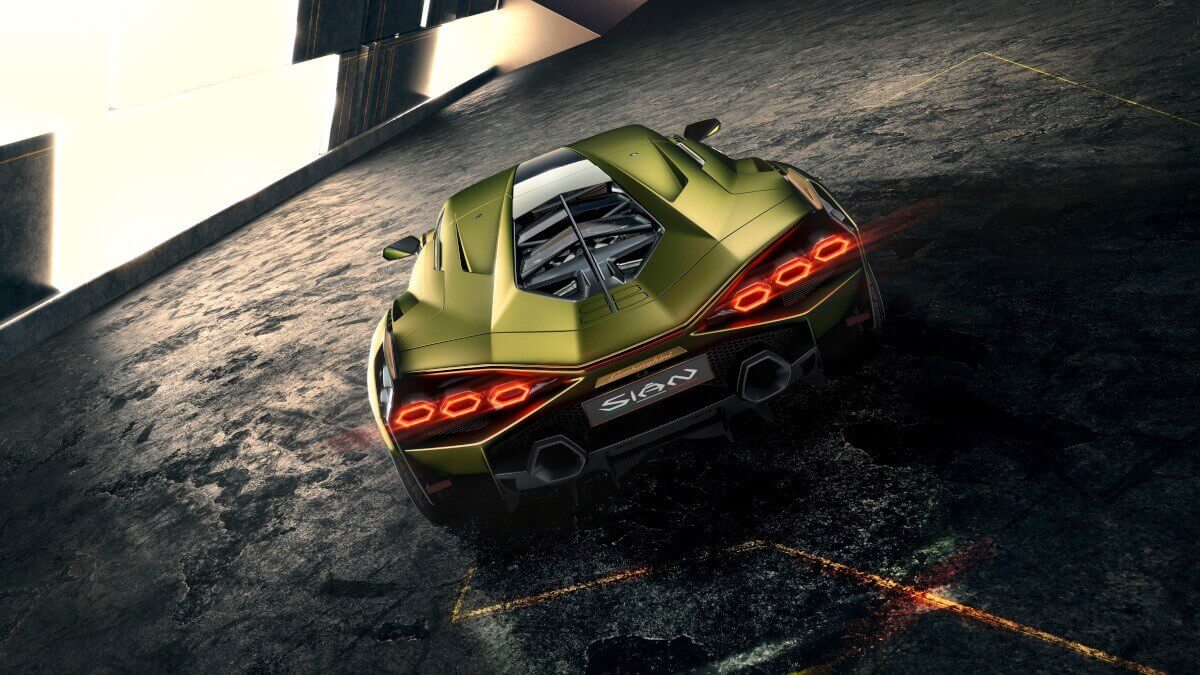 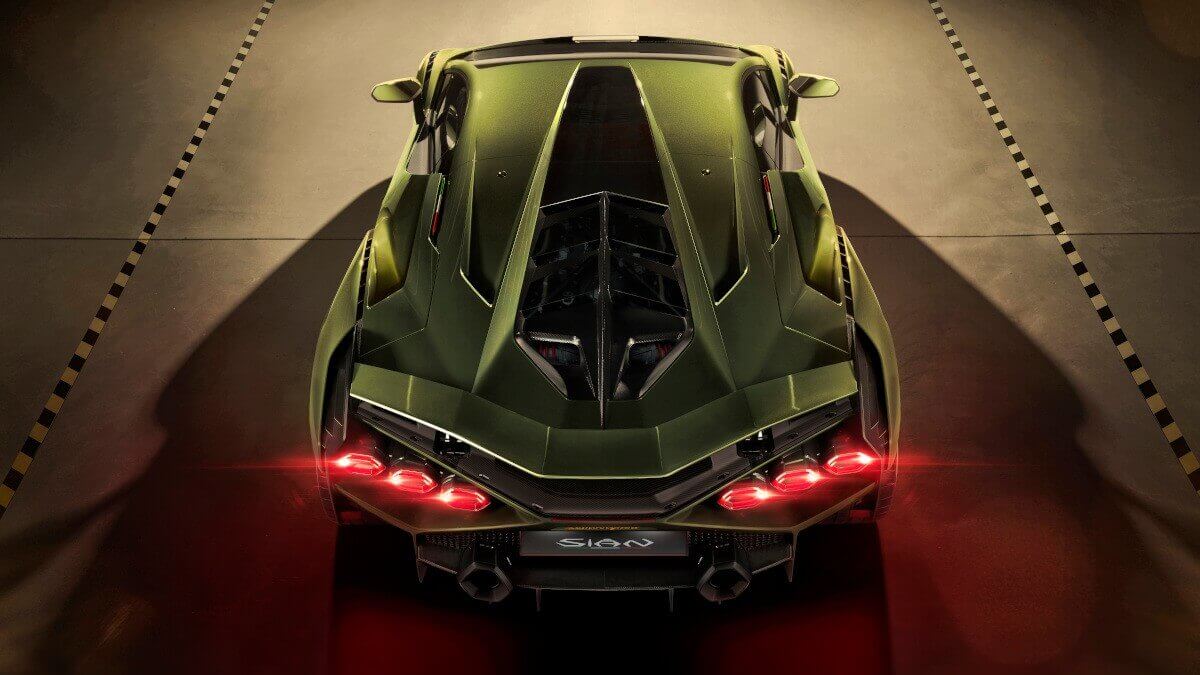 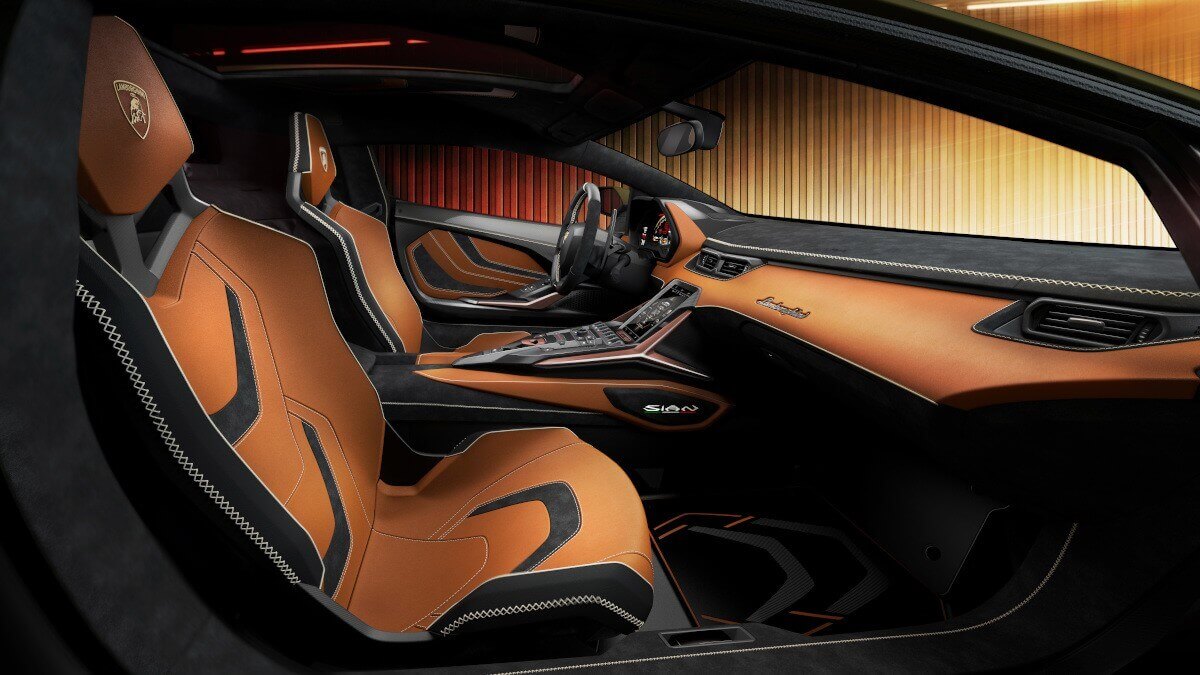 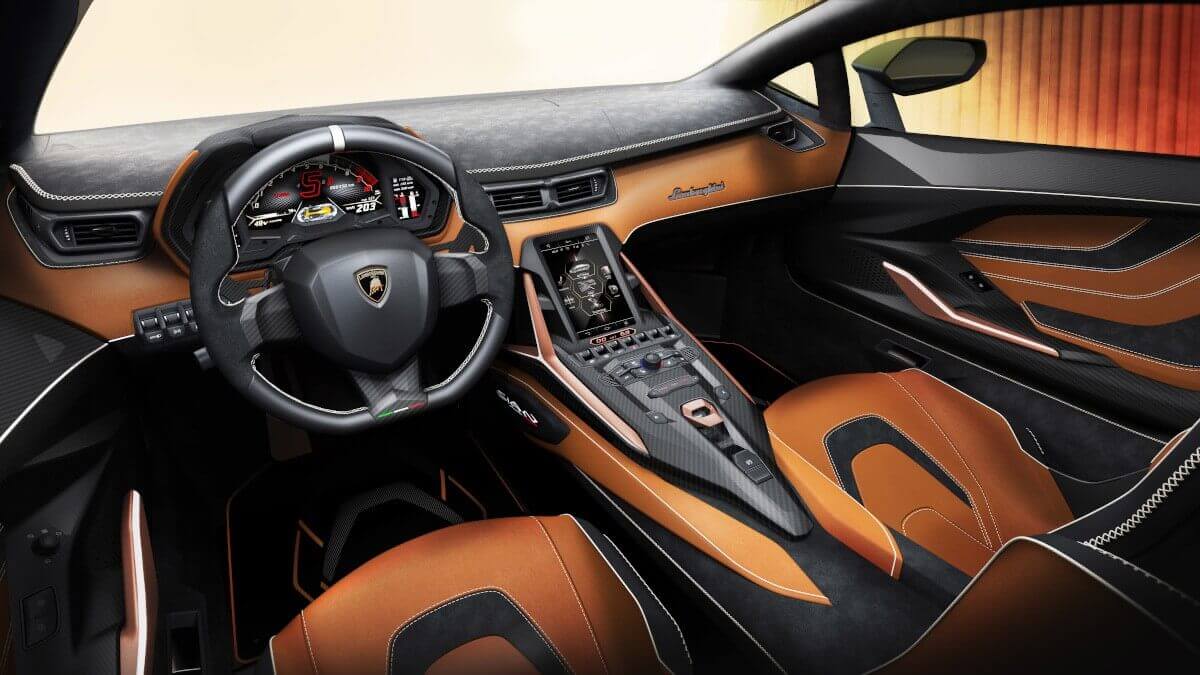 Visually, the Sián is clearly based on the Terzo Millenio concept car, which introduced an even stronger design language with the typical hexagons and the ‘Y’ for lights and aerodynamic elements. However, the new limited edition vehicle can’t hide its basis, the Aventador. The area of the rear side windows in particular is reminiscent of the Centenario Coupé, which is also based on the platform of the Aventador. In the silhouette there are some hints of earlier Gandini designs, but also new details such as the fins, called ‘Aerowings’ by Lamborghini. The six hexagonal LED tail lights and the rear wing, which only extends automatically while driving and otherwise rests flush on the rear section, are striking features.

All 63 vehicles are to become exclusive one-offs for the respective new owners. The experts from the Ad Personam customisation department and the designers of the Lamborghini Centro Stile are ready to help them. At the IAA, a car in the color ‘Verde Gea’ green with golden metallic particels) and highlights in ‘Oro Electrum’ (electric gold) will be shown. Inside, the finest leather from Poltrona Frau in the color ‘Terra di Sant’Agata Bolognese’ is used in combination with components from the 3D printer. Lamborghini gave no information about the basic price of the new Sián, whose name means as much as ‘lightning’.