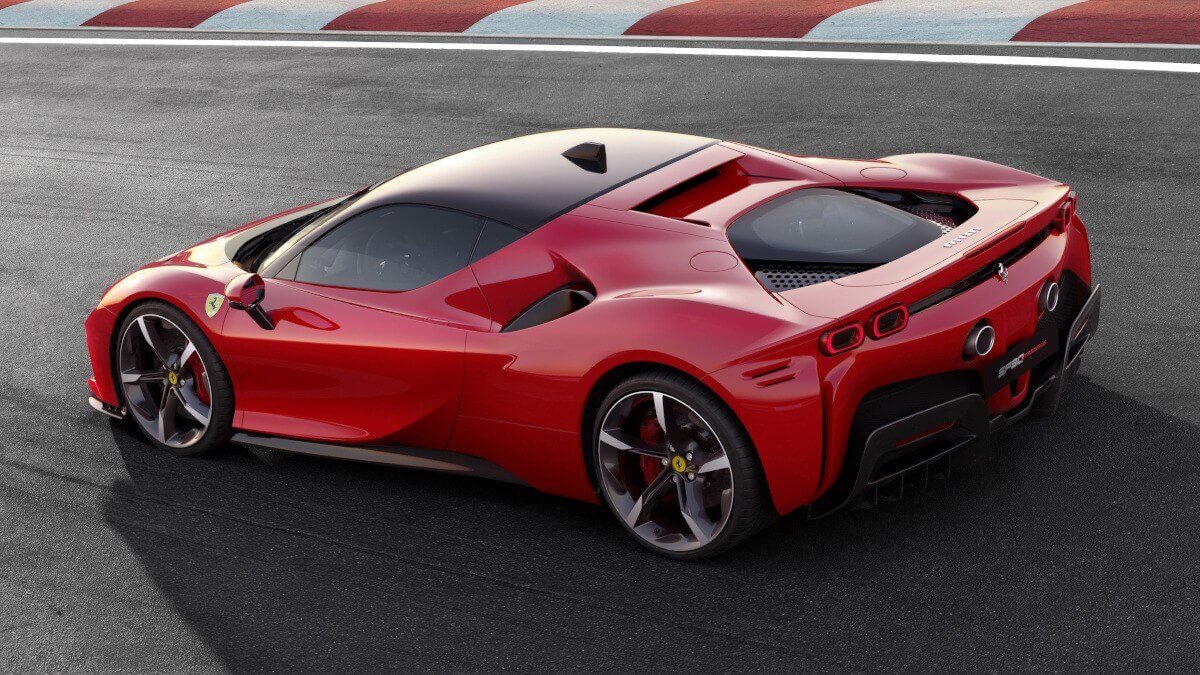 The Italian sports car manufacturer Ferrari presents its new top model with the SF90 Stradale. At the premiere, it is noticeable that, in addition to the expected superlatives and a considerable number of highly interesting detailed technical solutions, this time there is something quite different from the previous hypercars from Maranello, in whose tradition Ferrari deliberately doesn’t want to see the SF90. So the new car is to be classified in the model hierarchy above the 812 Superfast. Ferrari themselves speaks about the brand’s first top model with V8 engine, but seems to have lost the reference to its own history in this assessment, since the 288 GTO presented in 1984 and its successor, the legendary F40 presented in 1987, also featured turbocharged V8 engines.

But for now back to the new SF90 Stradale. Combining a V8 engine with 780 hp and a total of three electric motors with an output of another 220 hp, the new model achieves a system output of 1,000 hp, making it the most powerful road-legal sports car in Ferrari’s history to date. The V8 engine derived from the 488 Pista and F8 Tributo. For the use in the SF90, the engine developers from Ferrari slightly drilled the cylinders, thus increasing the displacement from 3,902 to 3,990 cubic centimeters, optimized the injection system and the flow conditions in the engine. The internal combustion engine is mounted behind the passengers and delivers its power together with an electric motor, which is located between the gasoline engine and the gearbox, to the rear wheels, while the other two electric motors are mounted between the front wheels and power these individually.

Interesting is the transmission variant that Ferrari has developed for the SF90. The all-new 8-speed dual-clutch transmission has no reverse gear. If the driver wants to change the direction of travel in their SF90, for example for parking, then the drive is only possible via the two front electric motors. Also pure electric drive is possible with these two electric motors in the ‘e-Drive’ mode, in which the SF90 becomes the first FWD Ferrari. Up to 25 kilometers (15.5 miles) and a topspeed of 135 kph (83.9 mph) are promised by the Italians in this first of four driving modes, which are available to the driver at the new e-Manettino switch at the steering wheel. By default, ‘Hybrid’ mode is activated when the vehicle is started, in which the combination of motors and drive is designed for optimized efficiency. The controlling software decides whether and when the internal combustion engine is switched on. If required, this is then available to the driver at full power. In ‘Performance’ mode, the internal combustion engine is basically started everytime. The priority is to charge the battery pack so that the full power of the electric motors is always available. The fourth and last mode is called ‘Qualify’. In this mode, full system performance is available as the combustion engine fully devotes its power to drive the car.

The performance that the new hybrid sports car is capable of seems impressive at first glance. For the acceleration of 0-62 mph, Ferrari promises 2.5 seconds and only 4.2 seconds later, the SF90 drives twice as fast. Thus, the Ferrari ranks next to hypercars like the Bugatti Chiron (2.4 and 6.1 seconds). Clearly a result that is achieved by the hybrid drive, as the electric motors provide their maximum torque directly from the start. Ferrari also states a maximum speed of 340 kph (211 mph). No, dear reader, this isn’t a misprint, the new Italian top-of-the-line supercar really isn’t faster than the F8 Tributo or 812 Superfast. A rather disappointing result for the engine output of 1,000 hp. A 17-year-old Enzo with its 660-hp strong naturally aspirated V12 engine already reached more than 350 kph (217 mph) and even the current competition from Sant’Agata Bolognese in the form of the Lamborghini Aventador SVJ with 770 hp is faster. Here the disadvantages of the hybrid drive show very clearly, as the 220 additionally horsepower are only available for a short time, but the additional weight of the batteries stays. 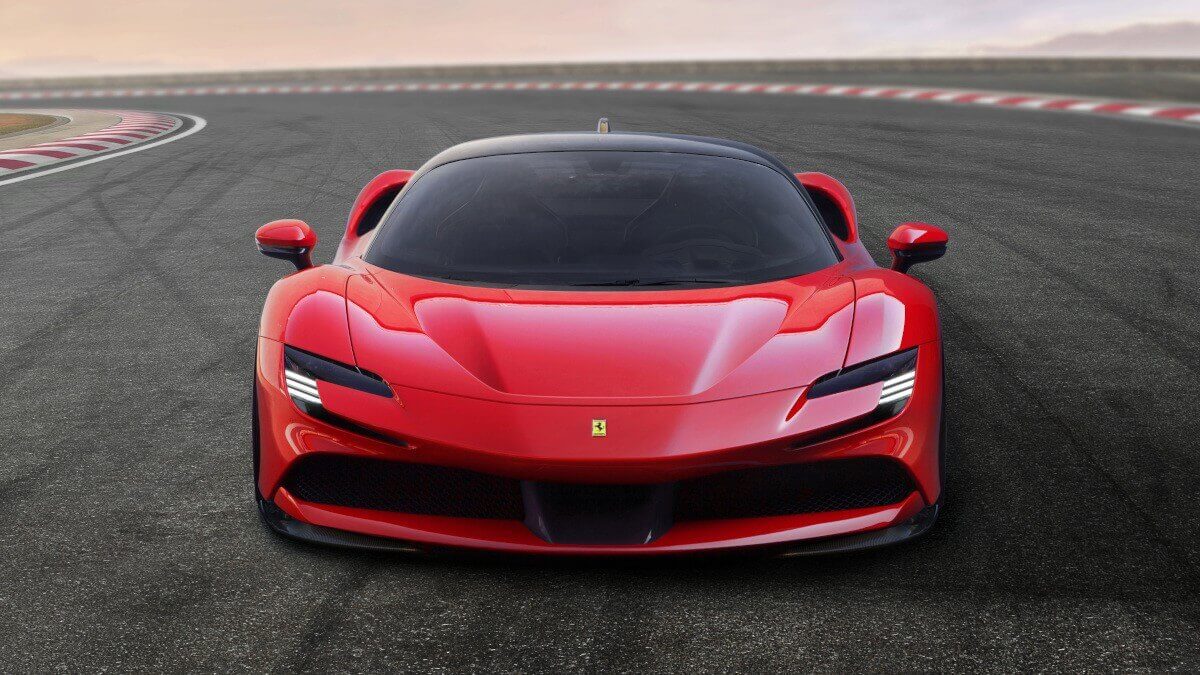 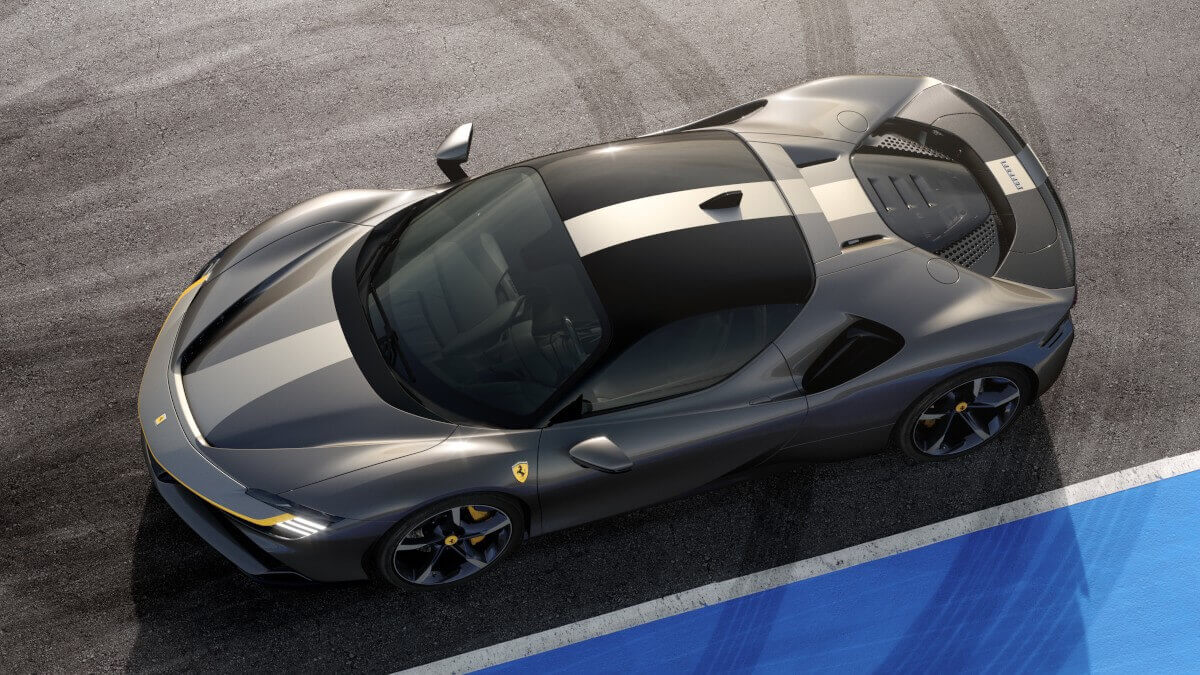 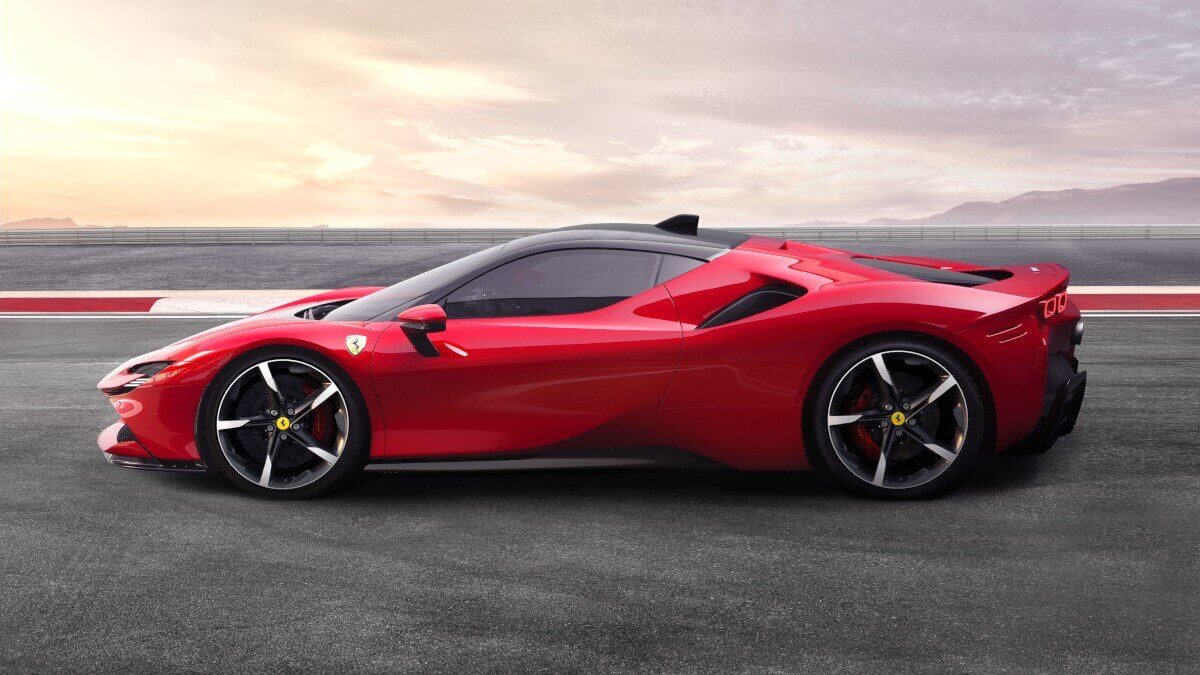 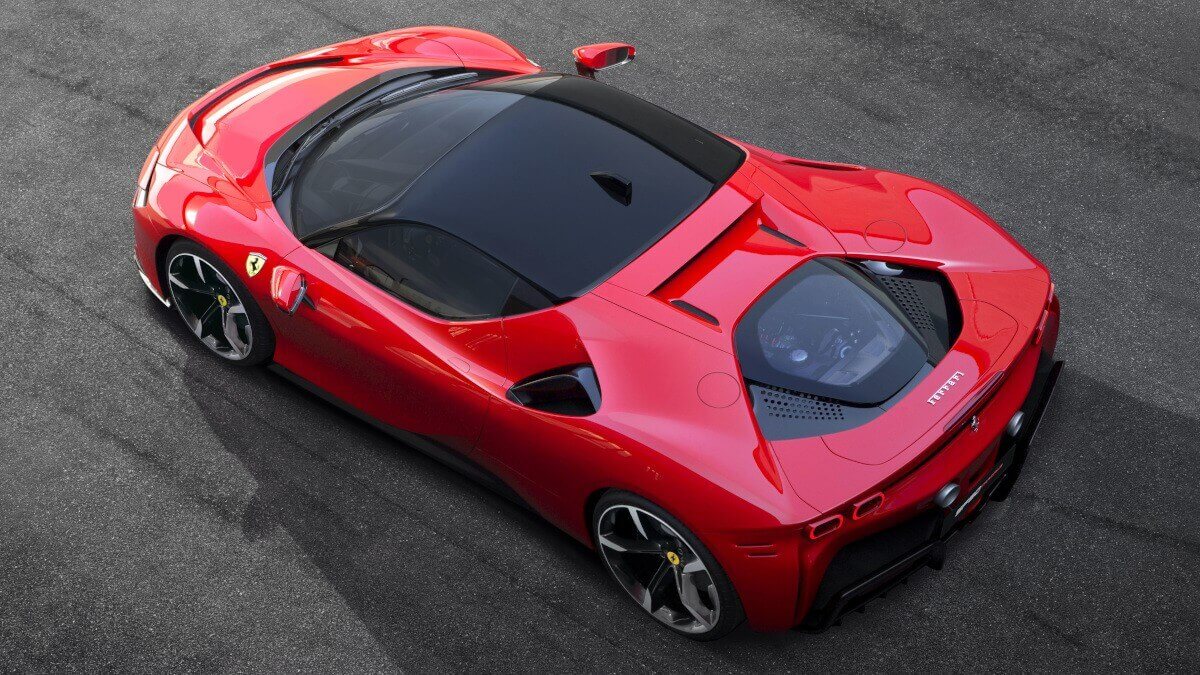 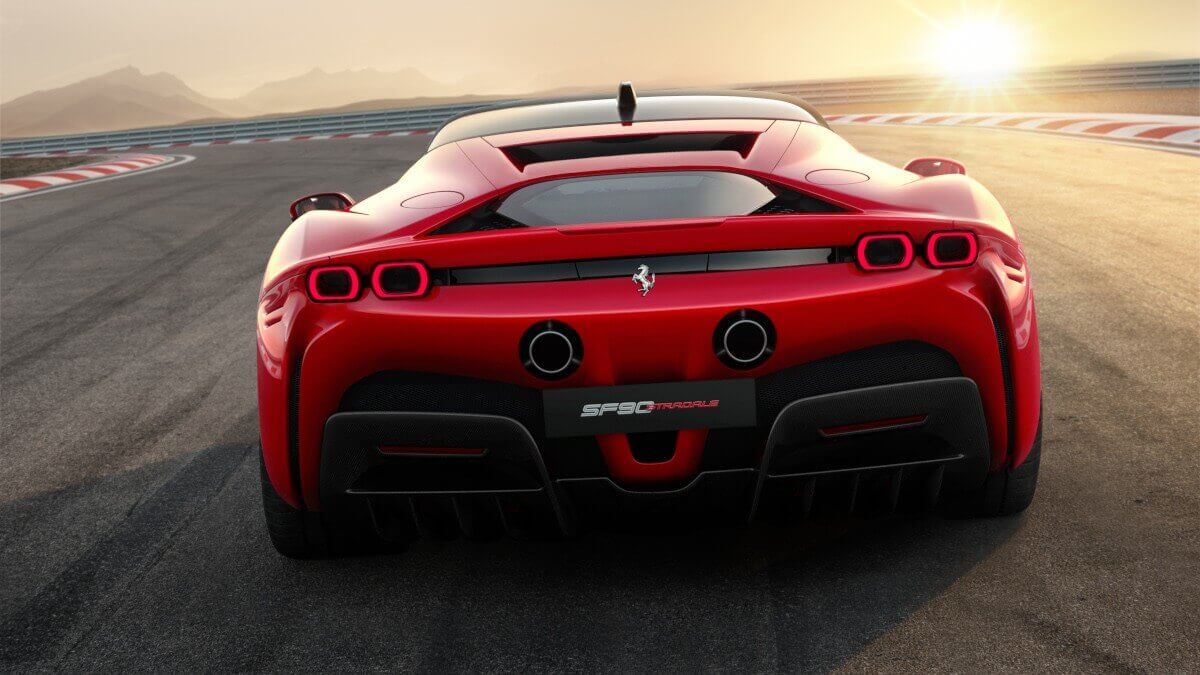 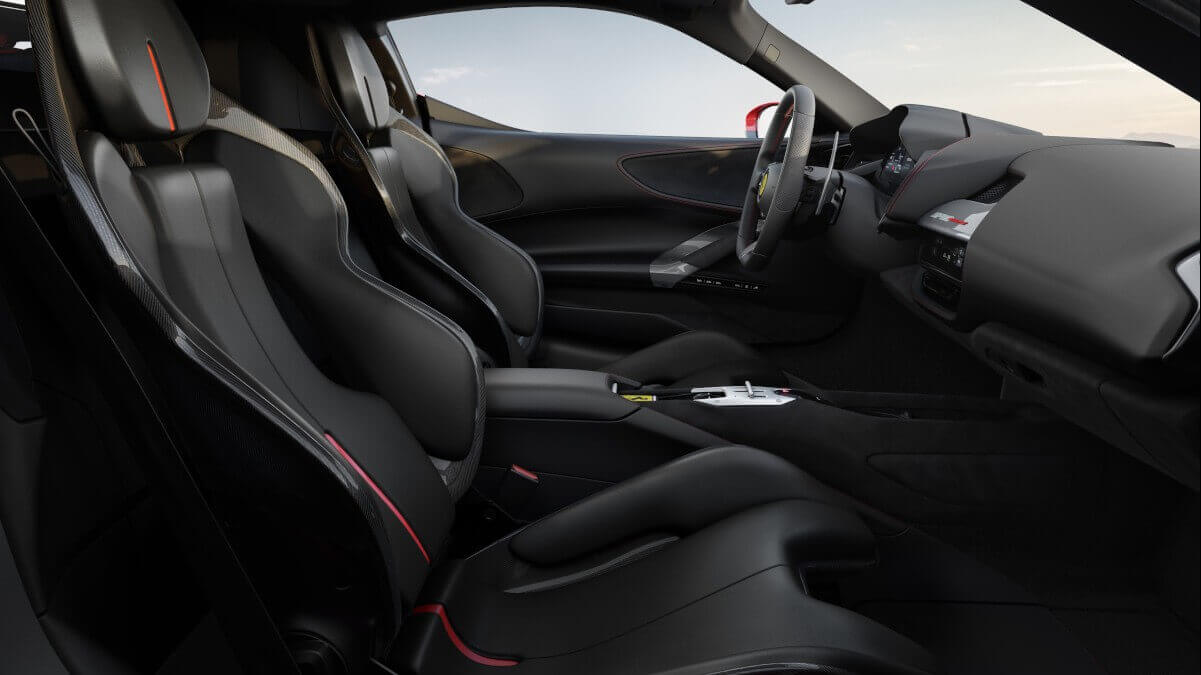 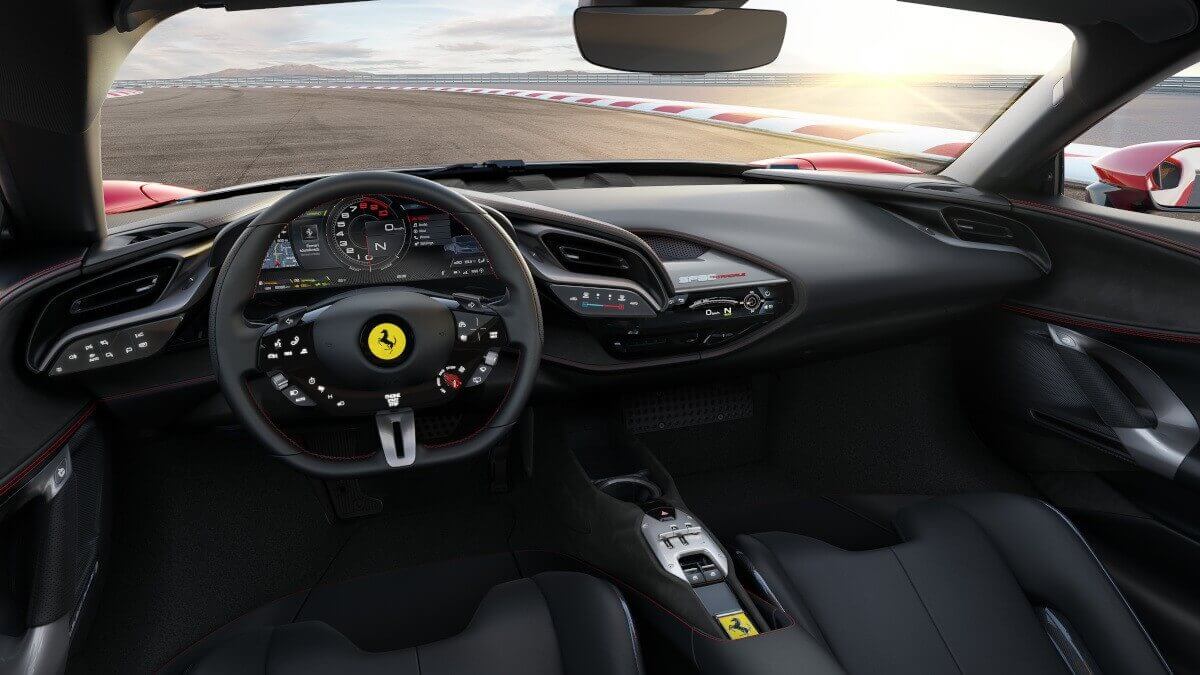 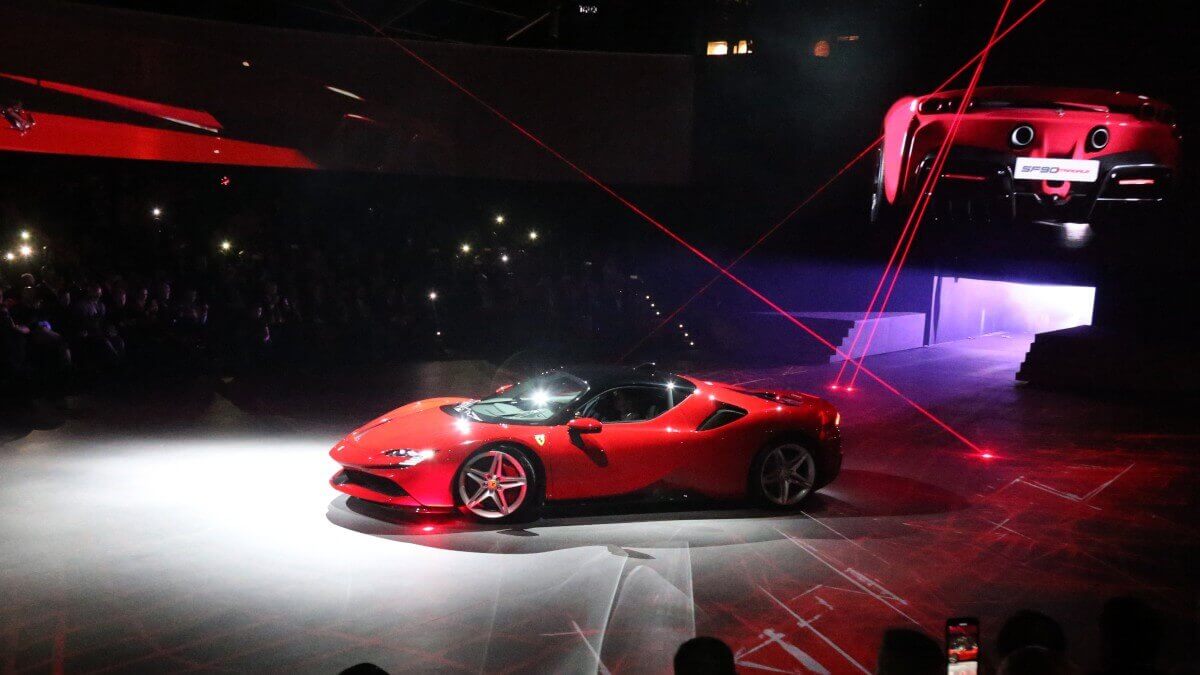 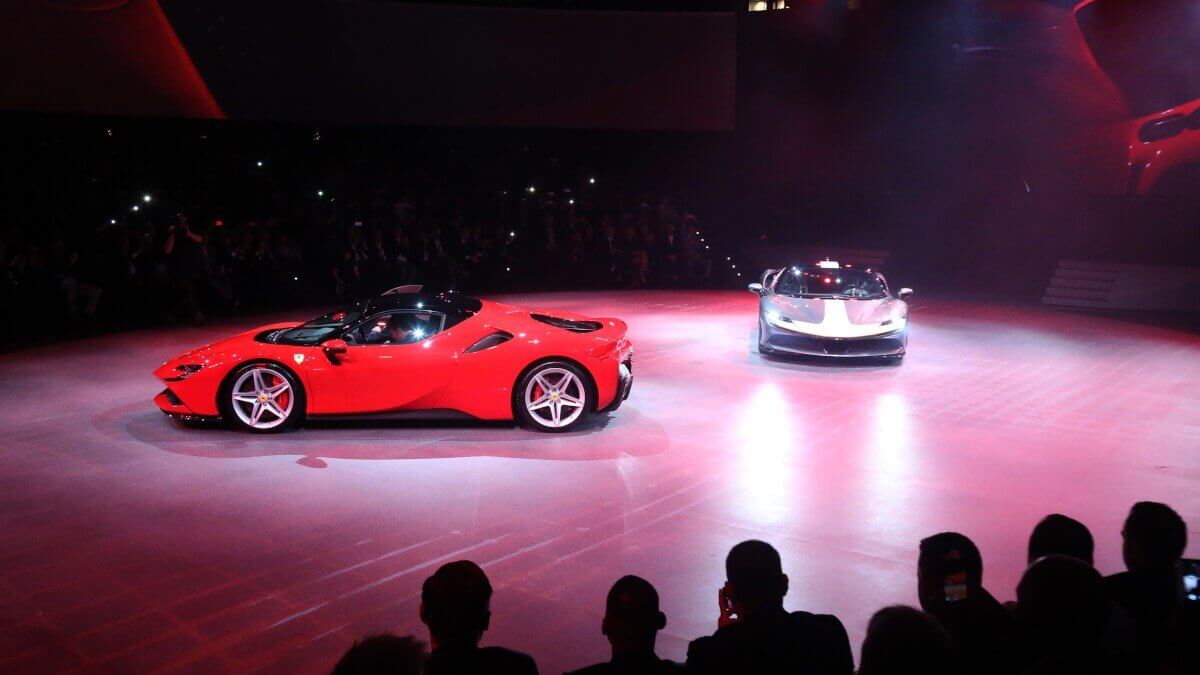 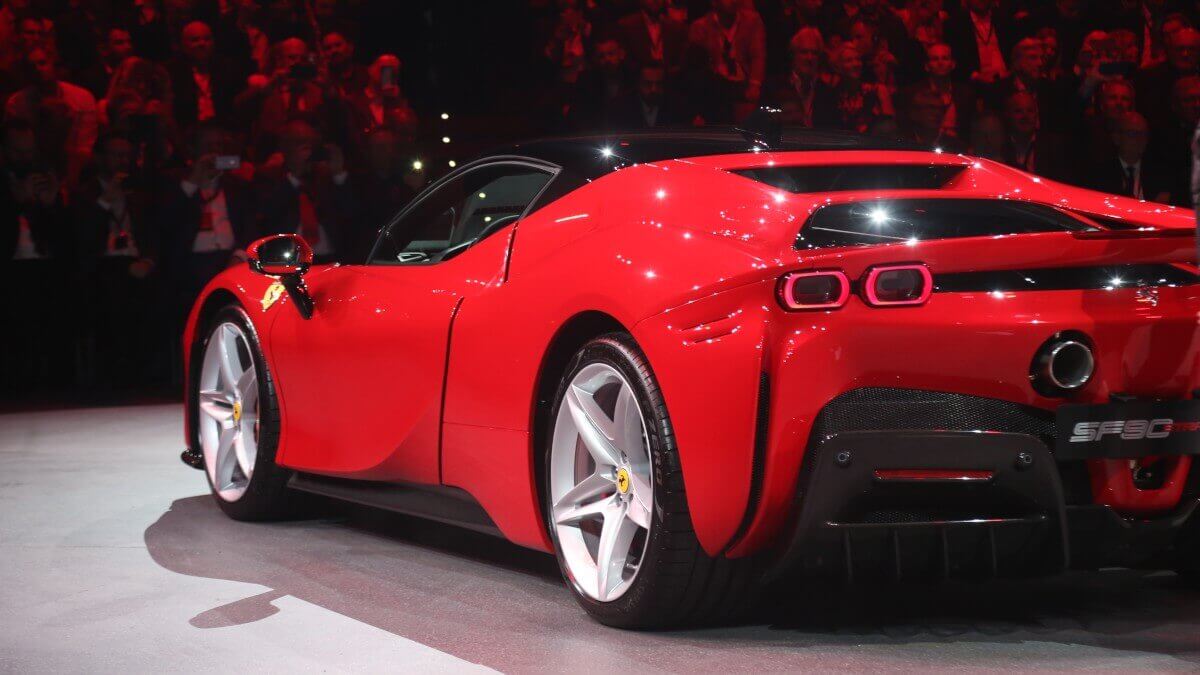 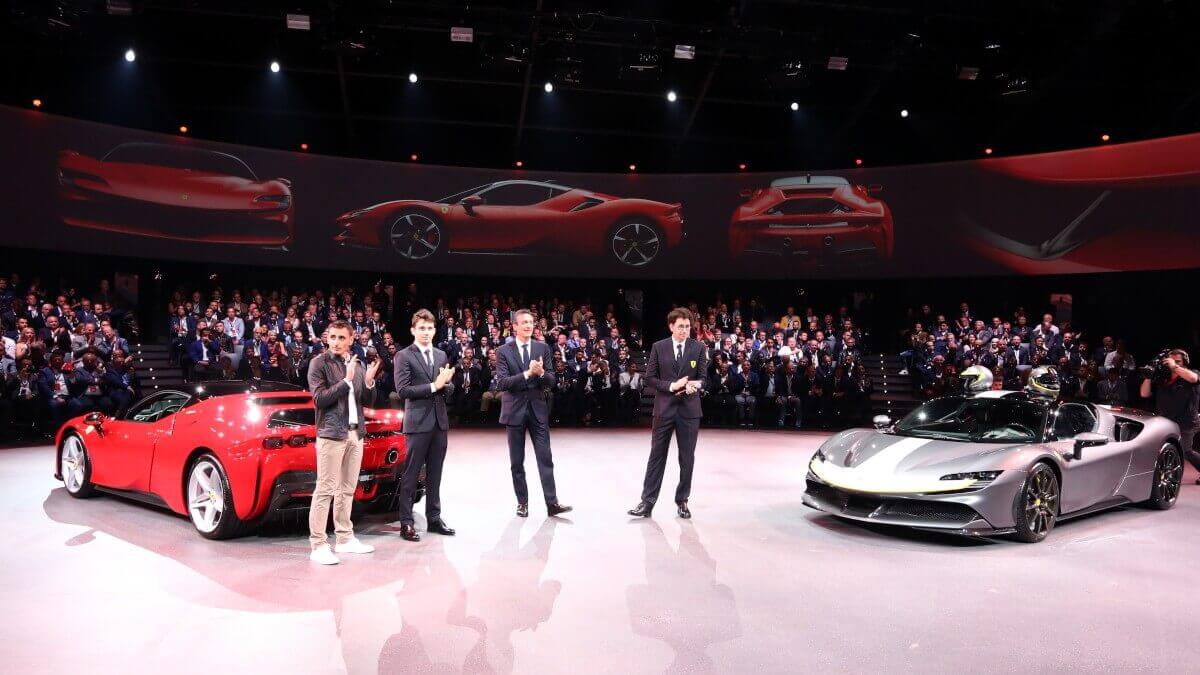 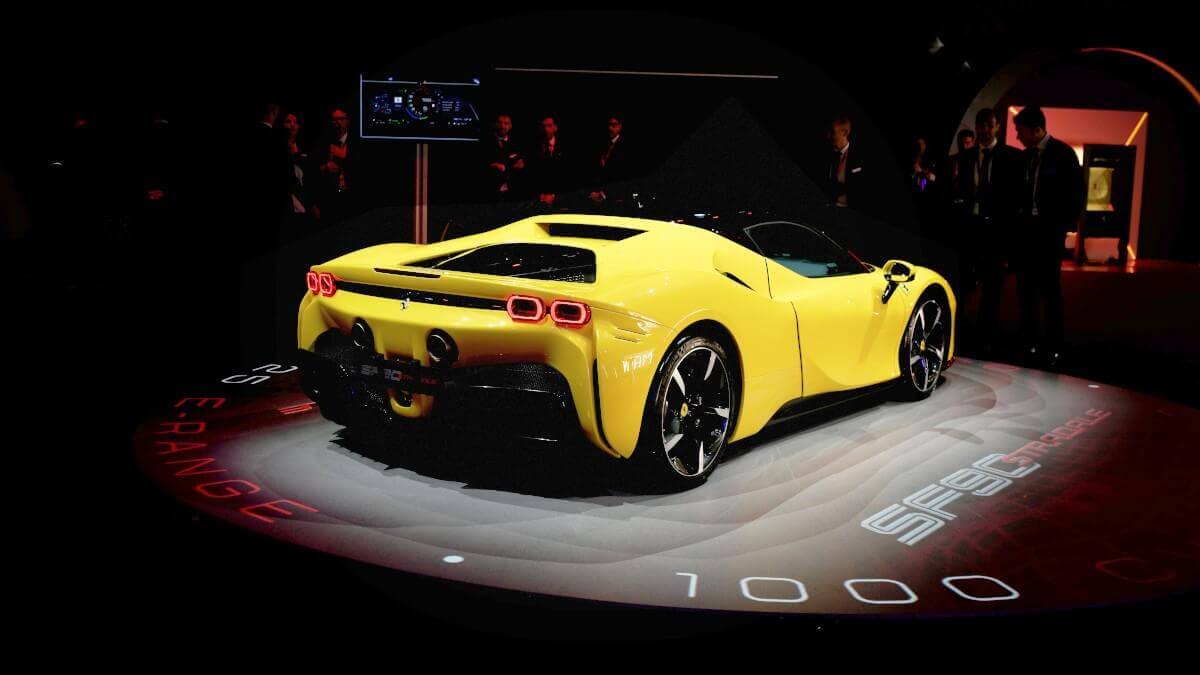 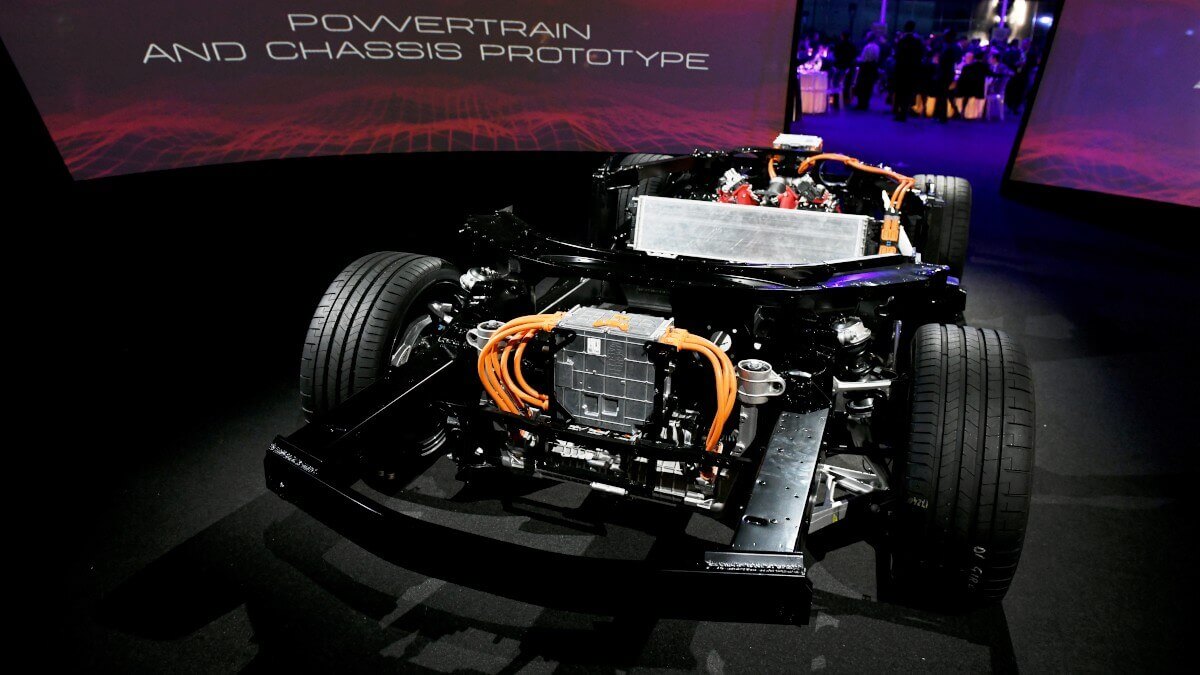 Since the SF90 is a PHEV (Plug-in Hybrid Electric Vehicle), the various control logic units of the vehicle had to be extensively adapted. This covered the areas of engine control, traction control, braking torque control and torque vectoring, and led, among other things, to the development of the new vehicle control system eSSC (Electronic Side Slip Control). Through this system, the torque distribution of the electric motors on the front axle can be controlled individually and as needed, and a portion of the braking energy can be supplied to the batteries as recuperated power.

Much attention has been paid to optimize the aerodynamics of their new top model in the development department in Maranello. Purposefully integrated air ducts provide sufficient cooling of the gasoline and electric motors, the transmission and the brakes, without deteriorating the air resistance. Ferrari’s aerodynamic engineers have managed to still produce 390 kilograms of downforce at a speed of 250 kph (155 mph). However, the comparison with other hypercars must be allowed here. The Koenigsegg Jesko, that debuted at Geneva Motor Show in March, achieves 1,000 kg of downforce at 275 kph (170.8 mph).

The interior of the new SF90 shows a modern architecture. The dashboard pleases with soft, flowing shapes. For the first time in a Ferrari, the central instrument cluster consists of a 16-inch digital HD screen, which curves towards the driver for better readability. The well-known attachment of the most important controls at the steering wheel has been further optimized and completed by a small touch screen on the right-hand spoke of the steering wheel, through which the driver can control the various display modes of the interior cluster. The selector lever for the control of the dual-clutch gearbox is located on the center console. Its different positions are modeled on the traditional gearshift pattern of classic Ferrari.

The Ferrari SF90 Stradale is produced in unlimited quantities and should be built as long as demand for the model exists, according to the Italian company. Prices have not been mentioned at the presentation, but will be above the 812 Superfast according to the positioning of the SF90 in the Ferrari model range. Delivery of the first vehicles is scheduled for the beginning of 2020.