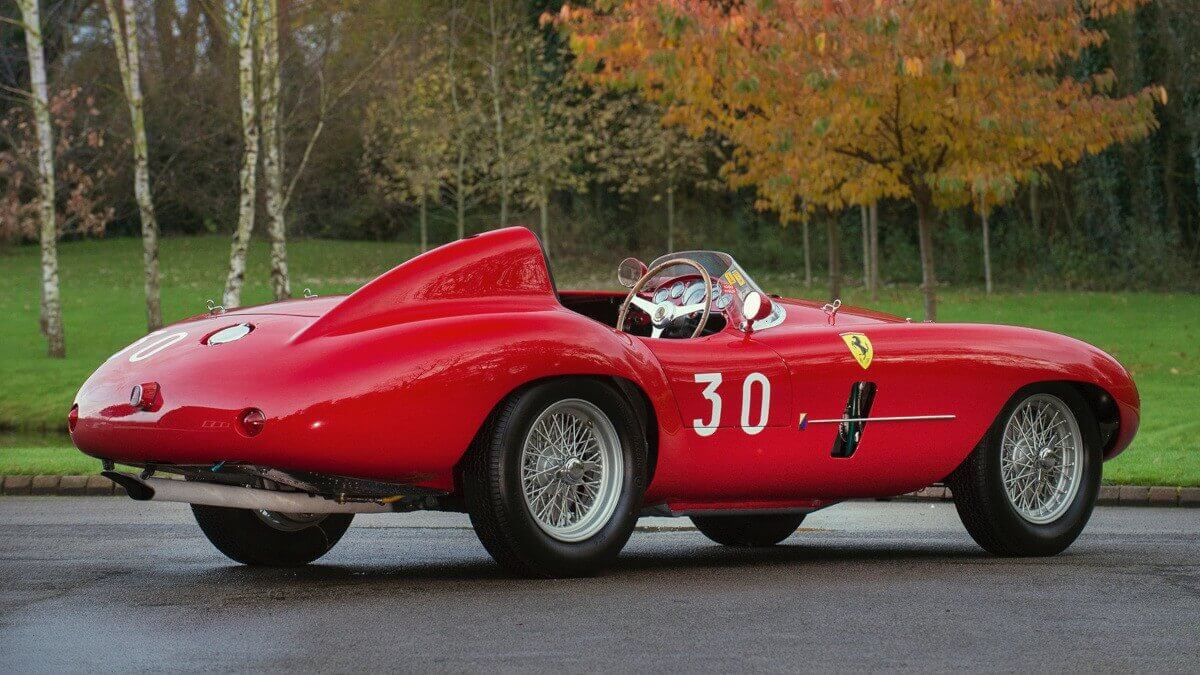 In 1953, Ferrari presented the 500 Mondial, a new racing sports car, to compete in endurance races and other events where sports cars were allowed to race. In addition to the cars of the factory team, there was also the opportunity for private racing drivers to acquire a 500 Mondial. Compared to the previous developments from Maranello there was a fundamental novelty: under the bonnet, this car had just four instead of the usual twelve cylinders. It was a two-liter engine developed by Aurelio Lampredi with two overhead camshafts driven by gears. A magneto ignition was used to drive two spark plugs per cylinder. The engine received its lubrication through a dry sump. In 1955, the Italians modified the vehicle and also increased the power from 114 kW/155 hp to 125 kW/170 hp. In addition, they upgraded the gearbox from four to five gears. At the front the wheels hang on double wishbones and transverse leaf spring, the rear wheels used a De Dion axle. In the above mentioned facelift they accounted for the front leaf spring in favor of coil springs. The year of construction becomes clear with a short look on the brakes, as Ferrari still used drum brakes all around.

Overall, Ferrari built 32 copies of the 500 Mondial. Two of them were experimentally bodied as Berlinettas by Pininfarina, the remaining cars showed up as open Spyders without a roof. Also they didn’t come with a classic windscreen, but instead with a flat transparent wind breaker, which ensures a little less wind in the cockpit. Nevertheless, the 500 Mondial was driven only with helmets on and flat out. The factory team made a very good debut with it, scoring the second place at the 12 Hours of Casablanca in 1953, just behind their teammates in a 375 MM. In February 1954, the Frenchman François Picard scored the first victory with a 500 Mondial at the Grand Prix of Agadir in Morocco. Final race events with this model were driven in 1964. In these twelve years, various racing drivers had achieved 13 overall wins and 46 class victories with the 500 Mondial. Incidentally, its name took on the first ever world championship (in Italian ‘mondiale’) in monoposto racing that Ferrari won in 1952 with the 500 Formula 2 cars with Alberto Ascari behind the wheel. Ascari was able to repeat this win again in 1953. 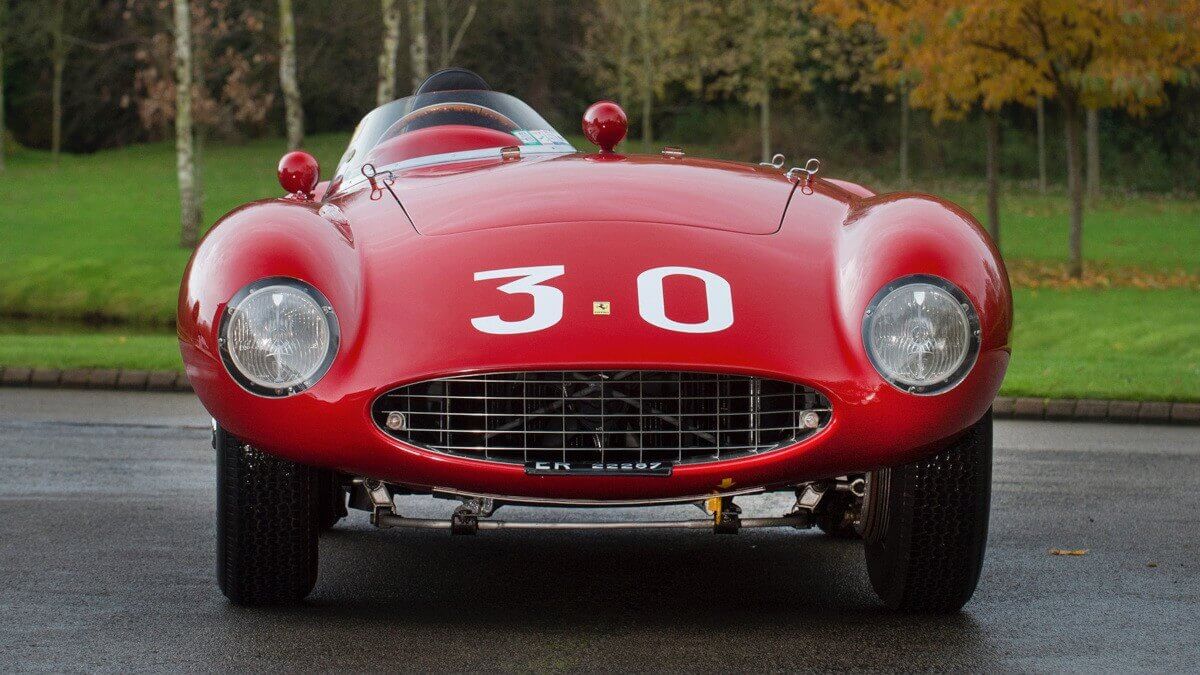 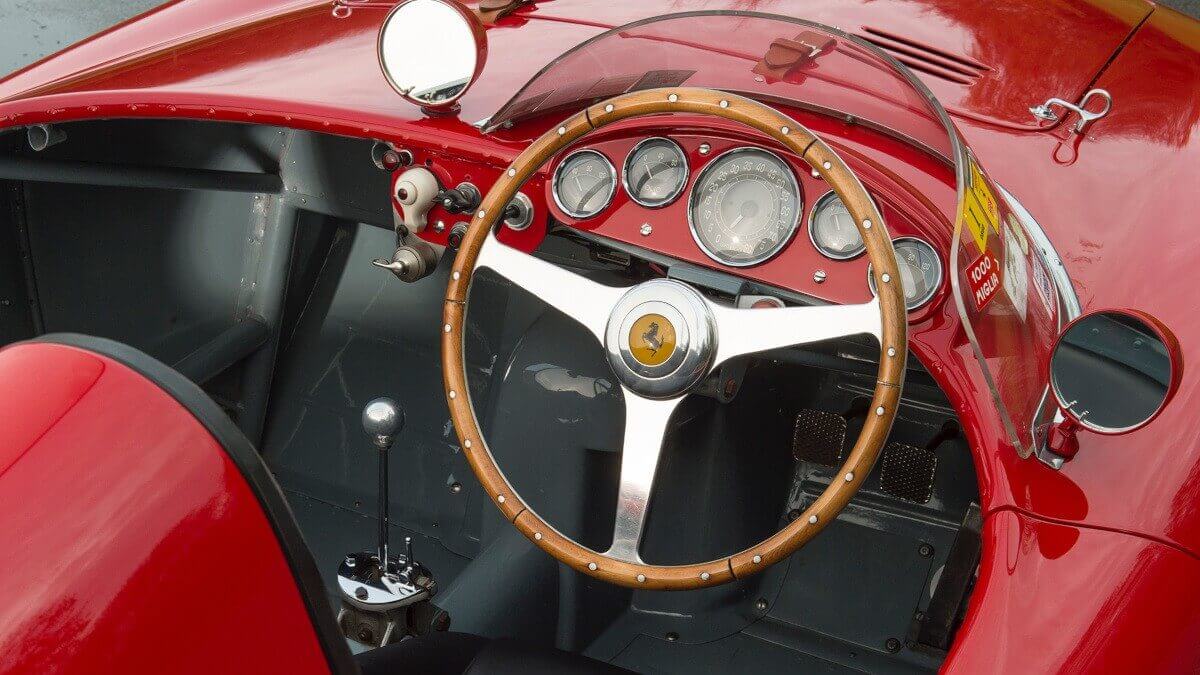 At the Concours of Elegance at Hampton Court Palace near London, a 1955 Ferrari 500 Mondial with a Spyder body by Scaglietti will be shown in the Ferrari category. Exactly this vehicle, shown by us in our gallery, scored the third place in the Coppa Mare a Monti and won the Grand Prix of Ethiopia in 1955. Racing driver and first owner Guido Petracchi sat behind the wheel. Subsequently, this 500 Mondial remained in Ethiopia for a long time, won the race on the Cote de Asmara and two more in 1956 with Gaetano Barone behind the wheel and then went into storage. In 1970, classic car dealer and car collector Colin Crabbe discovered it by pure coincidence during his holidays in Ethiopia and bought it on the spot. This was followed by an extensive restoration and meanwhile a few more owner names in the documents.

The Concours of Elegance will take place from 6 to 8 September 2019 for the eigth time. Here, car fans can look forward to a wide range of pre-war classic cars right up to the area of ‘Future Classics’, which are interesting modern cars that might become interesting to collectors. In total, more than 1,000 hand-picked cars from all over the world can be found. In addition to the Ferrari category, this year there will also be a special show of Aston Martin sports cars with Zagato bodyworks.