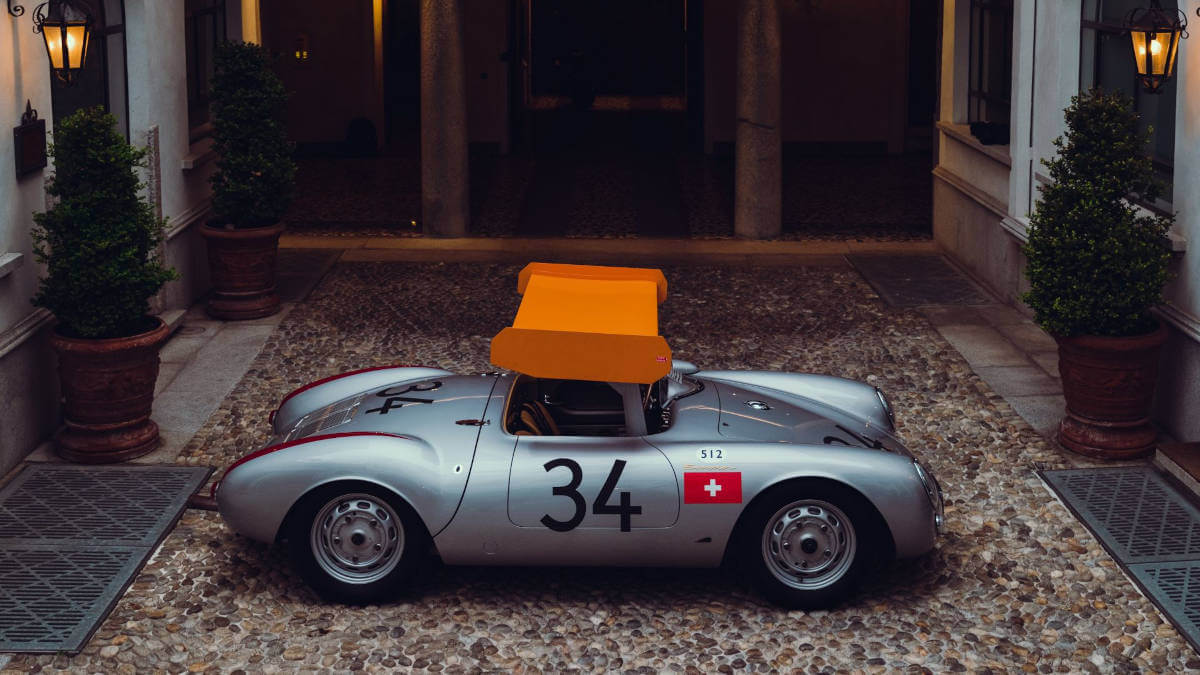 While large spoilers and wings are a natural part of racing cars nowadays, this wasn’t the case in the 1950s. The impact of aerodynamics on handling was still in its infancy. Instead, some manufacturers tried their hand at higher engine power and others at lower curb weight. Both approaches were more or less successful, depending on the race track. However, some private drivers began their own small experiments in aerodynamics. This resulted in the first spoiler lips on the front and rear of GTs and sports cars. Here, too, there were both successes and failures. However, these experiments didn’t initially meet with much interest from the major car factories and racing teams.

Even Porsche, otherwise known for innovations, preferred to continue with unmodified vehicles. Since the 550 Spyder made its debut at the Paris Motor Show in October 1953, it has been an international success. A total of around 100 examples were built, most of which were sold to private teams and drivers. These included the car with chassis number 0031, which was completed on March 12, 1955 and delivered to the Swiss hotelier Walter Ringgenberg. He was a good friend of Ferry Porsche. Shortly after taking delivery of the car, he and Richard von Frankenberg drove it together at the speedbowl Montlhéry near Paris. There they jointly set six international speed records in the class up to 1.5 liters of displacement. 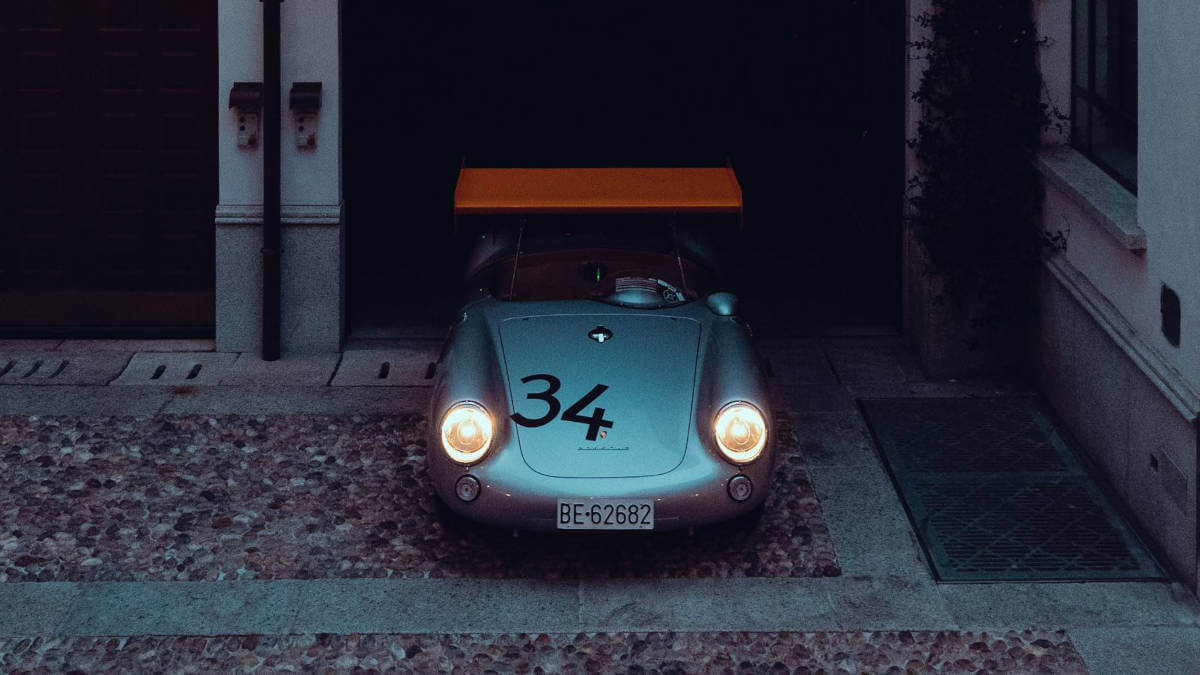 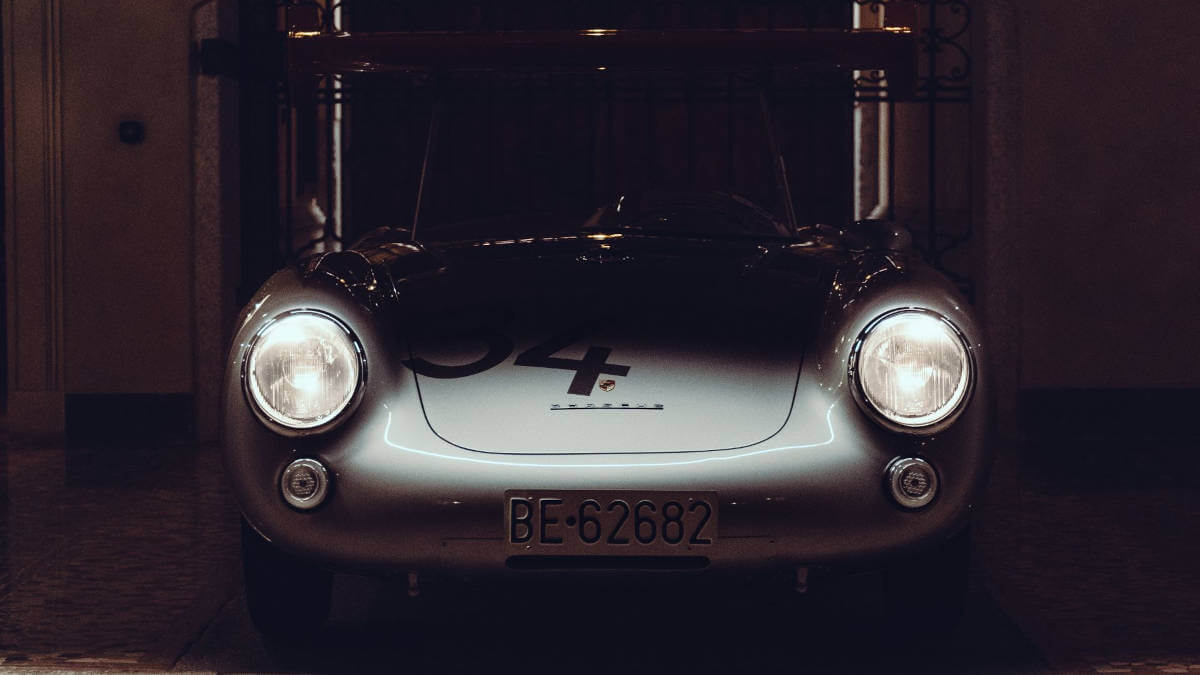 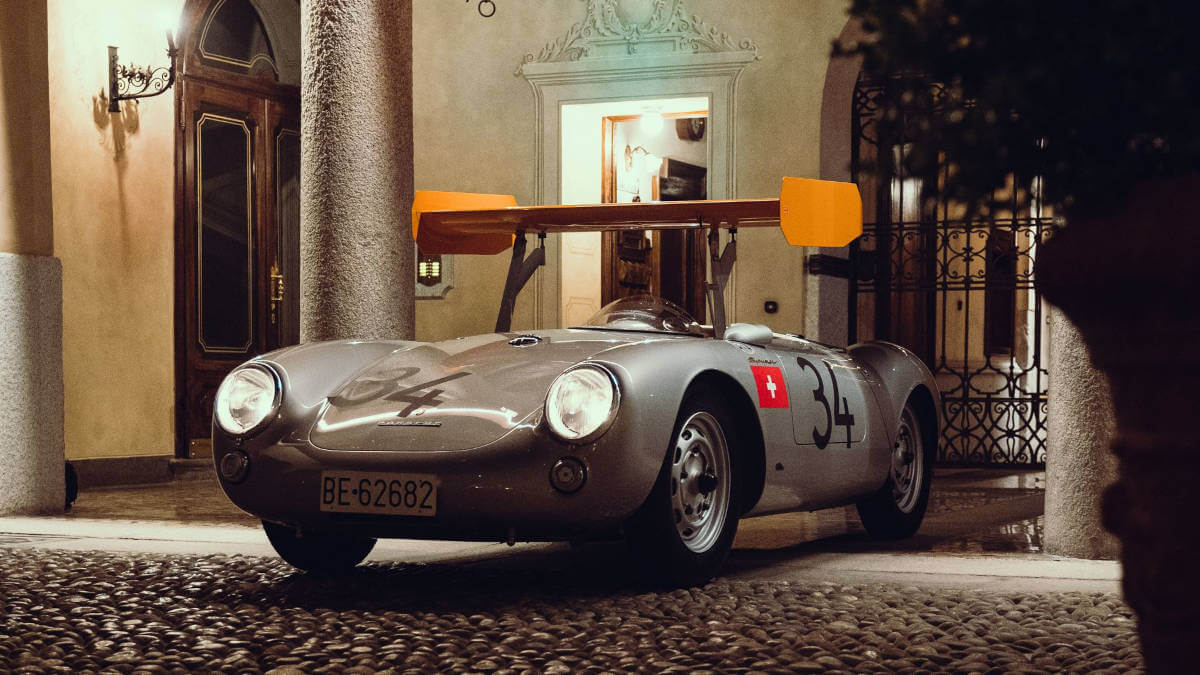 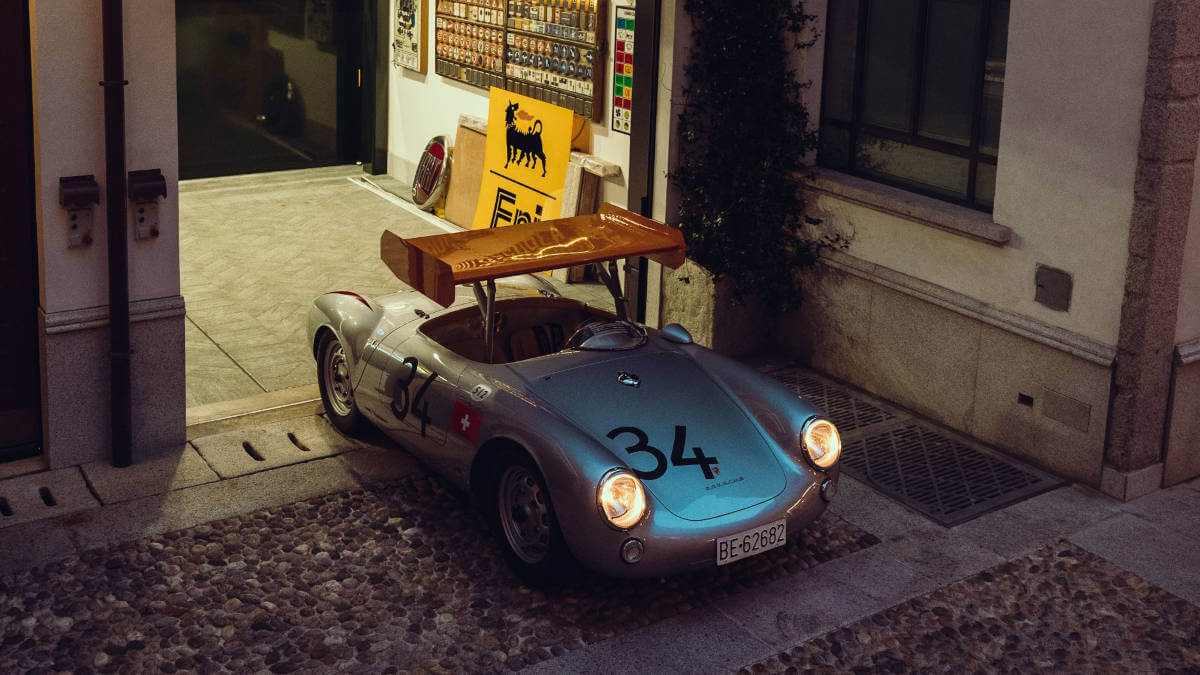 Interestingly, Richard von Frankenberg appears in the vehicle documents as the first owner, possibly to save taxes in Switzerland. Von Frankenberg also reported in Porsche’s Christophorus magazine about the preparations in advance of the record runs, during which the engine was first run on the test bench. He then tested the car 100 kilometers on the highway before transferring it to Montlhéry. After the successful runs, they screwed license plates back onto the 550 Spyder and drove it to the start of the Soleil-Cannes Rallye in southern France. There, the car skidded off the road and therefore dailed to finish. Entries followed at Hockenheimring (victory by von Frankenberg), Le Mans (retirement with engine failure), the Nürburgring 500 Kilometer race (retirement due to gearbox failure) and the Avus Grand Prix in Berlin (result unknown). In 1956, Swiss Hans Gerber acquired the Porsche and raced it together with his cousins Michael and Pierre May.

Michael May was born in 1934. At a young age, he designed wing attachments for his model race cars. As a student, he was given access to his cousin’s Porsche 550 Spyder. He began to turn his ideas about downforce into reality. The goal was to make the car more stable and faster in curves and under braking. To this end, he calculated a large wing with a NACA-6412 profile and oversized end plates. The latter were intended to calm the airflow and thus improve the effect of the wing even further. He positioned this centrally above the car and anchored it directly to the chassis with struts. The angle of the wing blade could be adjusted via a lever in the cockpit. According to his calculations, the downforce at 93 mph (150 kph) should be as high as the actual vehicle weight. 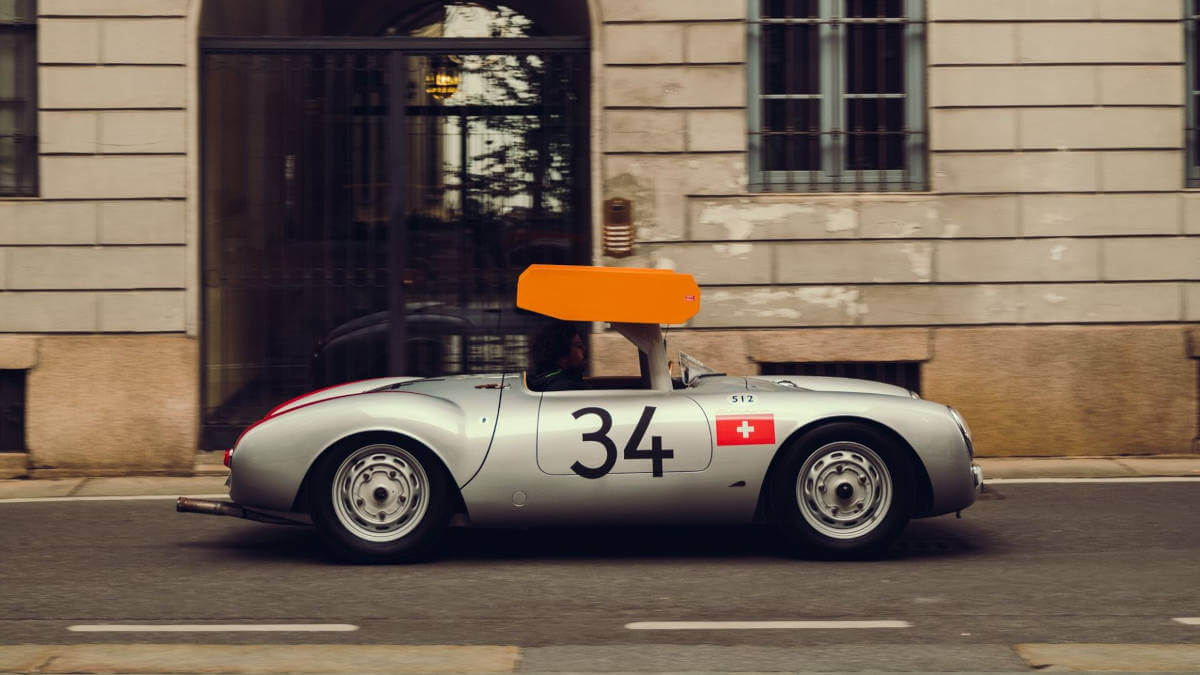 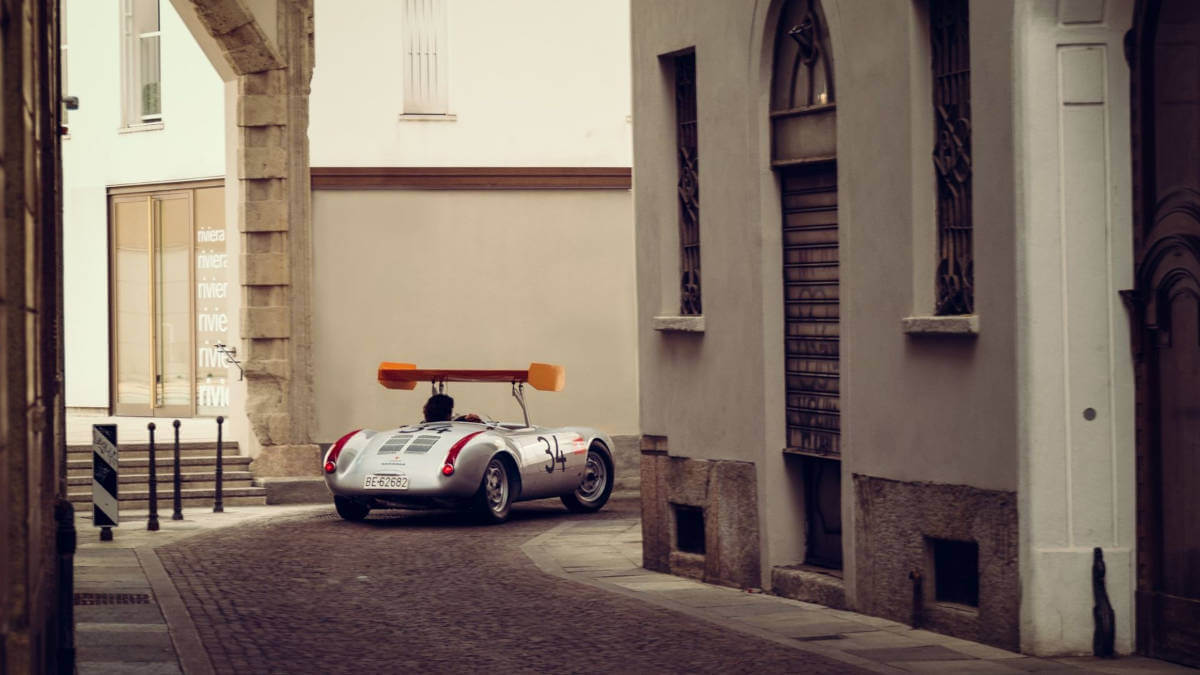 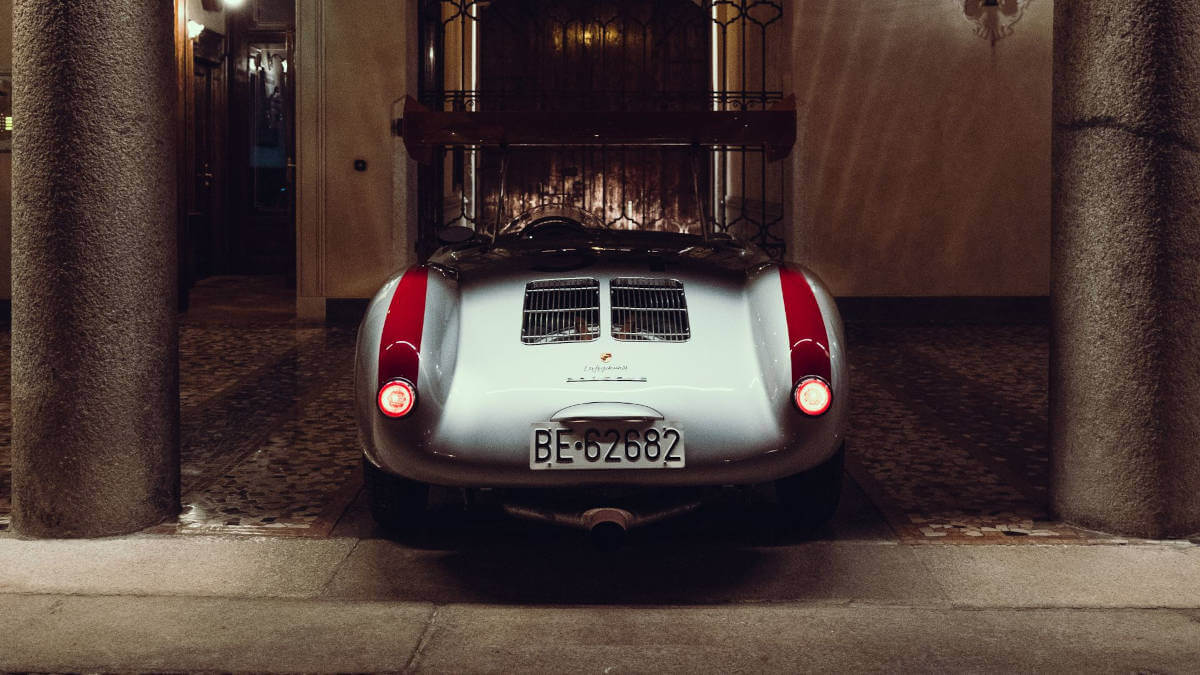 At the first race at the Nürburgring on May 27, 1956, Michael May earned mostly incredulous laughter and incomprehension when he arrived with the car. But after the practice session at the latest, the opinion of some observers changed. With his conversion, he hadn’t only beaten the Porsche factory team by several seconds, but also significantly more powerful cars from other manufacturers. Instead of acknowledging this success, however, the Porsche team boss at the time, Huschke von Hanstein, made sure the race control banned the wing. His readoning was that the struts would allegedly obstruct the view of other competitors from the cockpit. As a result, the two cousins May and Gerber started without the aerodynamic part and ultimatley retired with gearbox problems. They subsequently got into similar trouble again at the Gran Premio Supercortemaggiore in Monza, Here, too, they ultimately had to start without the wing. They finally stored the wing at home and took part in various other races with the unmodified 550 Spyder.

After Michael May finished his studies, he joined Bosch in the development of fuel systems. From there, his customers included Porsche and Ferrari, among others. For Jaguar, he developed the ‘Fireball’ cylinder head for the ‘High Efficiency’ version of their V12 engine in 1980. Likewise, he is known for his company Turbo May, which specialized specifically in turbocharging some Ford models. Meanwhile, the Porsche 550 Spyder’s path led it through two more garages in Switzerland and then, via two German and one Dutch owner, to Fritz Kozka in Dresden in 1998. The latter, with the assistance of Michael May, had a replica of the big wing built. May even able to remember the original color, an orange shade from Porsche. With this completed component, the 550 Spyder appeared at the Goodwood Festival of Speed in 1998. Thanks to FIVA and FIA papers, the car was also raced in various classic car events until 2000.

After being driven by Marcus Schachtschneider between 2000 and 2002, the Porsche was sold to Italian Ugo Gussalli Beretta, CEO of the arms factory of the same name. He had an extensive restoration of the complete car carried out at Quality Cars in Padova. Once again, Michael May helped to ensure the functionality of the wing adjustment via the lever in the cockpit. In 2015, the sports car was shown at the Pebble Beach Concours d’Elegance and won second place in the ‘Postwar Racing Car’ class. The car also impressed at the 2016 Concorso d’Eleganza at Villa d’Este. In April 2017, the current owner took delivery of the 550 Spyder and showed it again in 2018 at the Goodwood Festival of Speed. Now this pioneering car in aerodynamic add-on parts is for sale at Kidston SA.