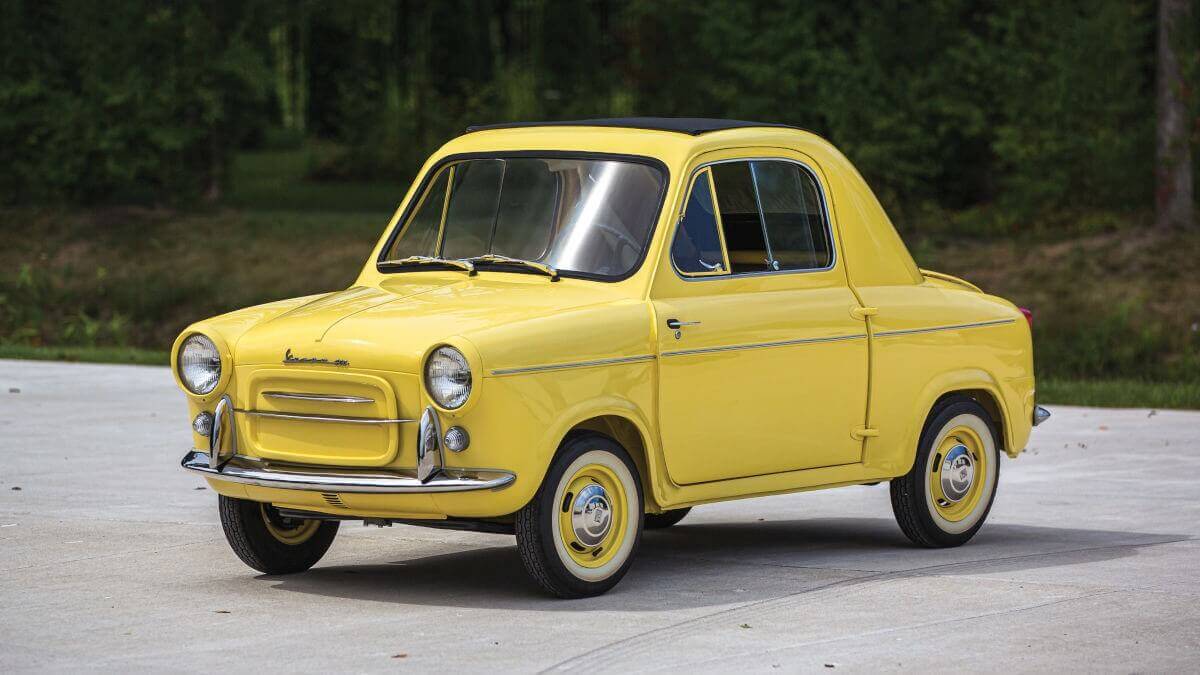 The Italian company Piaggio has been in existence since 1884 and is particularly well known worldwide for scooters. However, the brand’s history began with a timber warehouse in Sestri Ponente near Genoa, where ships were built shortly afterwards. Again a few years later, the company shifted to the construction of railroad carriages and then, from 1916, to the design and construction of planes in a new factory in Pontedera. These and other armaments ensured that Piaggio was one of the most successful companies in Italy in the 1930s. However, bombing raids during the war destroyed the main factory and after the war the Allies decided that Piaggio had to stop producing weapons. Enrico Piaggio, son of company founder Rinaldo Piaggio, took over the management of the company and had a scooter developed to meet the increased mobility needs of the Italians. In 1946 the scooter was introduced as the Piaggio Vespa (Italian for wasp).

While the scooter has remained in the program ever since in a similar form in ever new variations and achieved worldwide recognition, other products of the brand have remained rather unknown. A certain fame can definitely still be attested to the three-wheeled small transporter Ape (Italian for bee), which has been available since 1948. Mopeds such as the Ciao or the Bravo, the van Porter or large scooters such as the Skipper or the Hexagon are probably only known to fans of the brand. The same is true of a small car, which Piaggio developed from the mid-1950s onwards, when the needs of the population moved away from two-wheelers and towards cars. While in Germany small cars like the BMW Isetta, Zündapp Janus, Messerschmitt KR200 and others courted buyers, there were no comparable offers in Italy at that time. The Piaggio Vespa 400 made its debut at the Paris Motor Show in 1957, having already completed a full year of testing. During the same period, however, Fiat presented the Nuova 500, whose compact basic concept combined with a low price gave Piaggio a hard time. As a result, the main market for the Vespa 400 was shifted towards Belgium and France, where there were significantly fewer competing models available. Even the production finally took place in the French factory in Fourchambault. 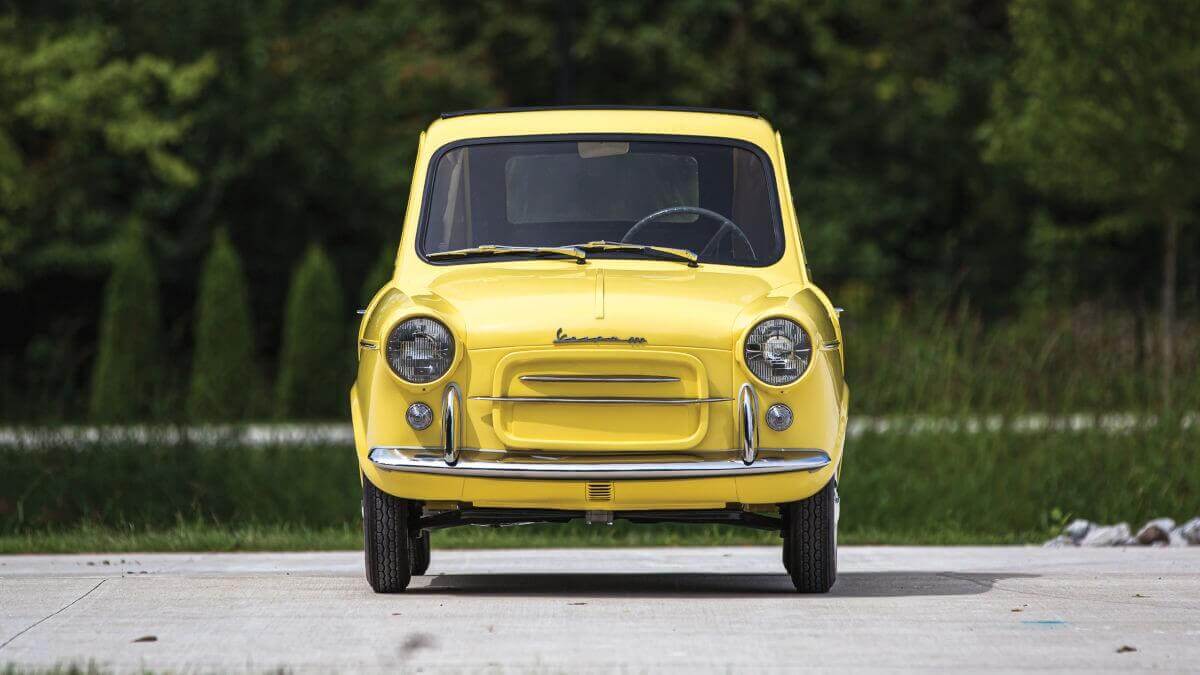 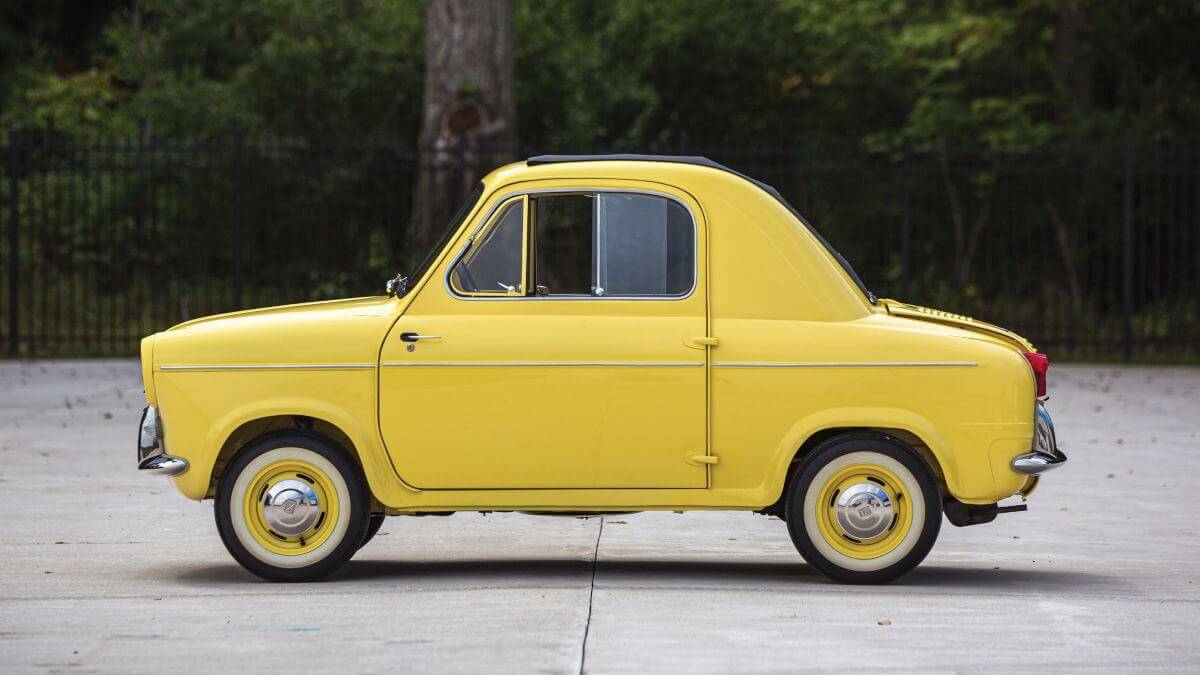 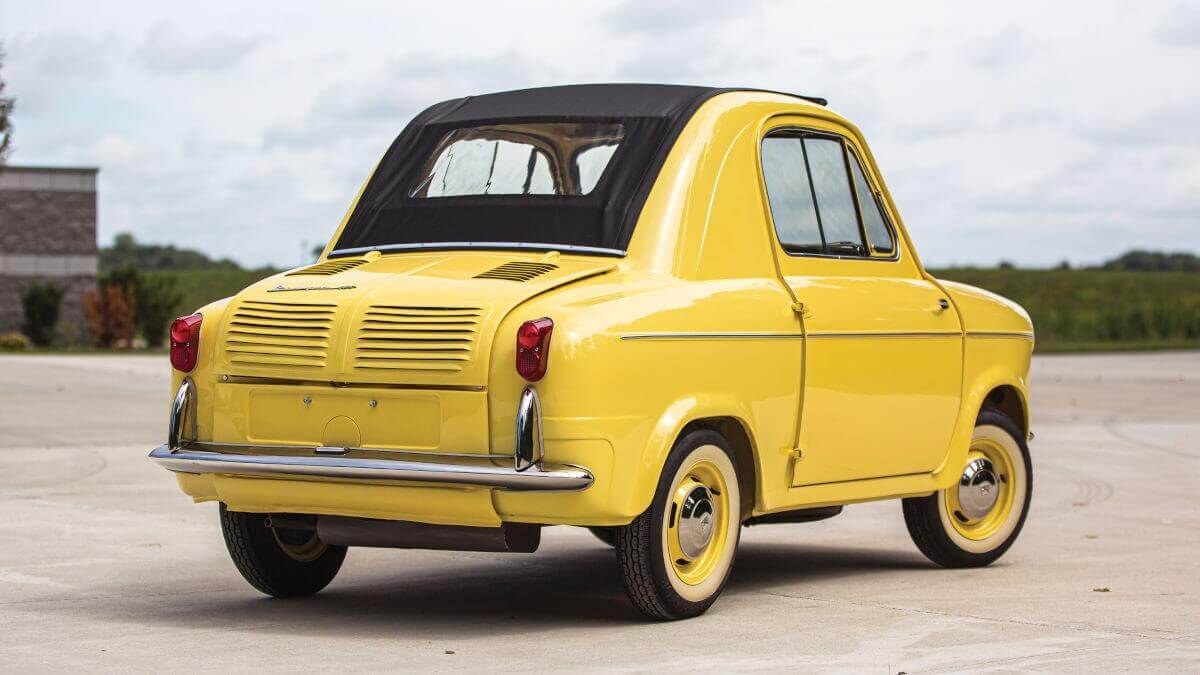 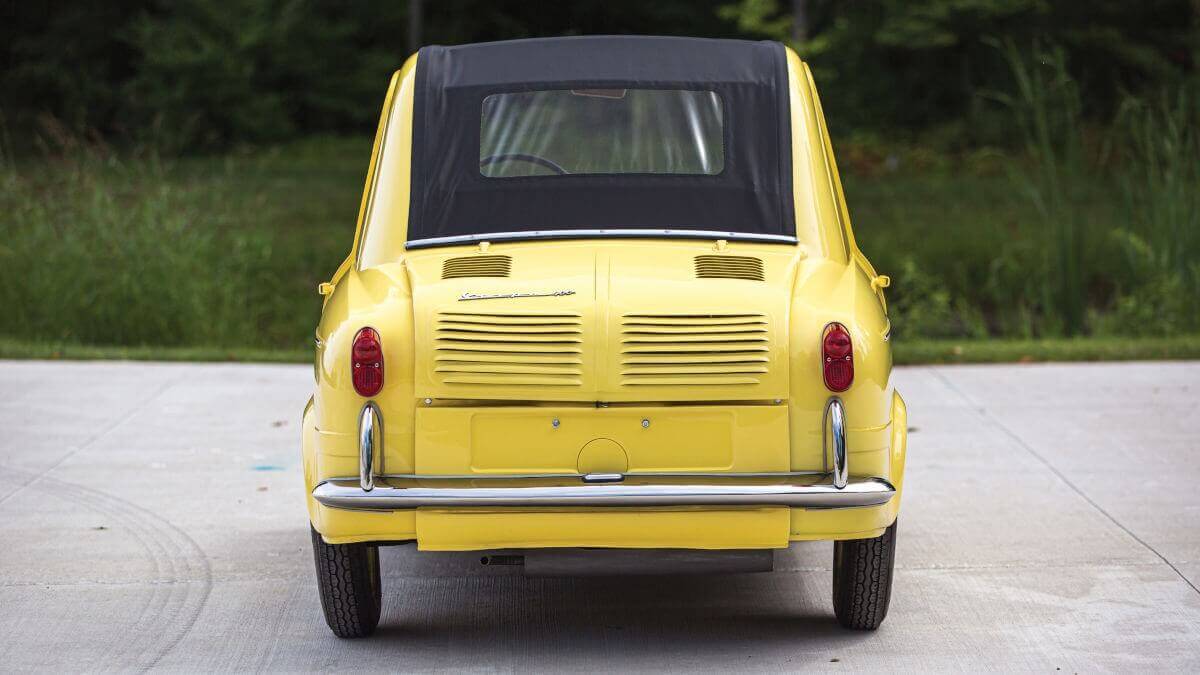 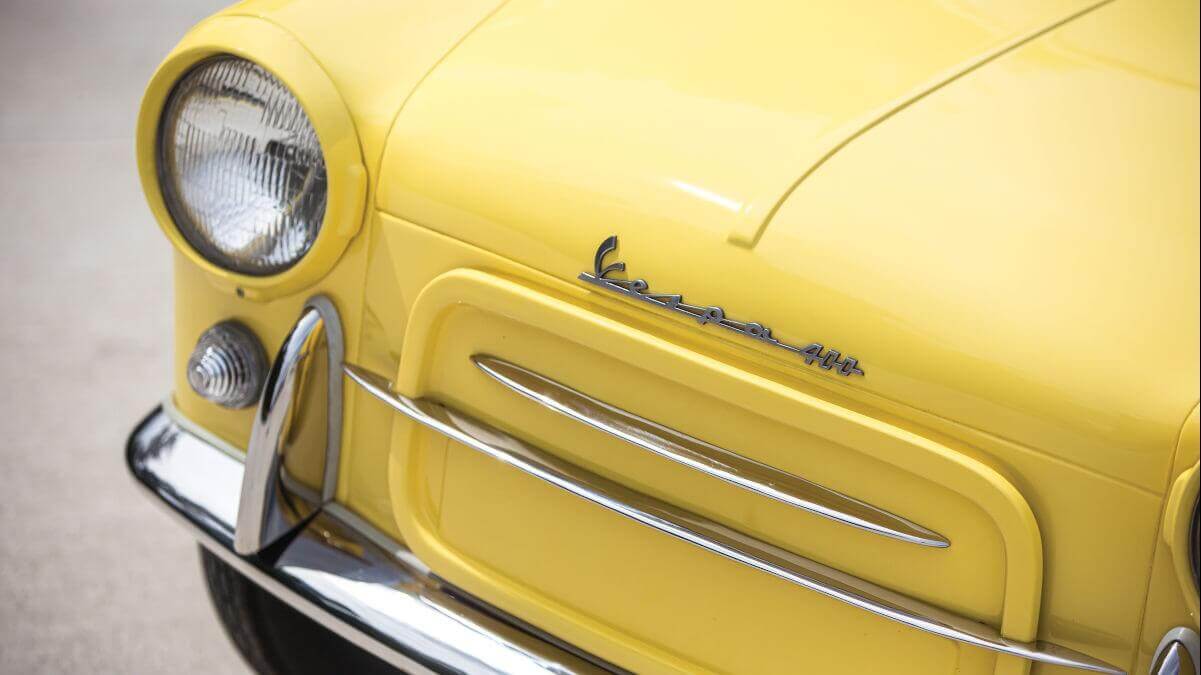 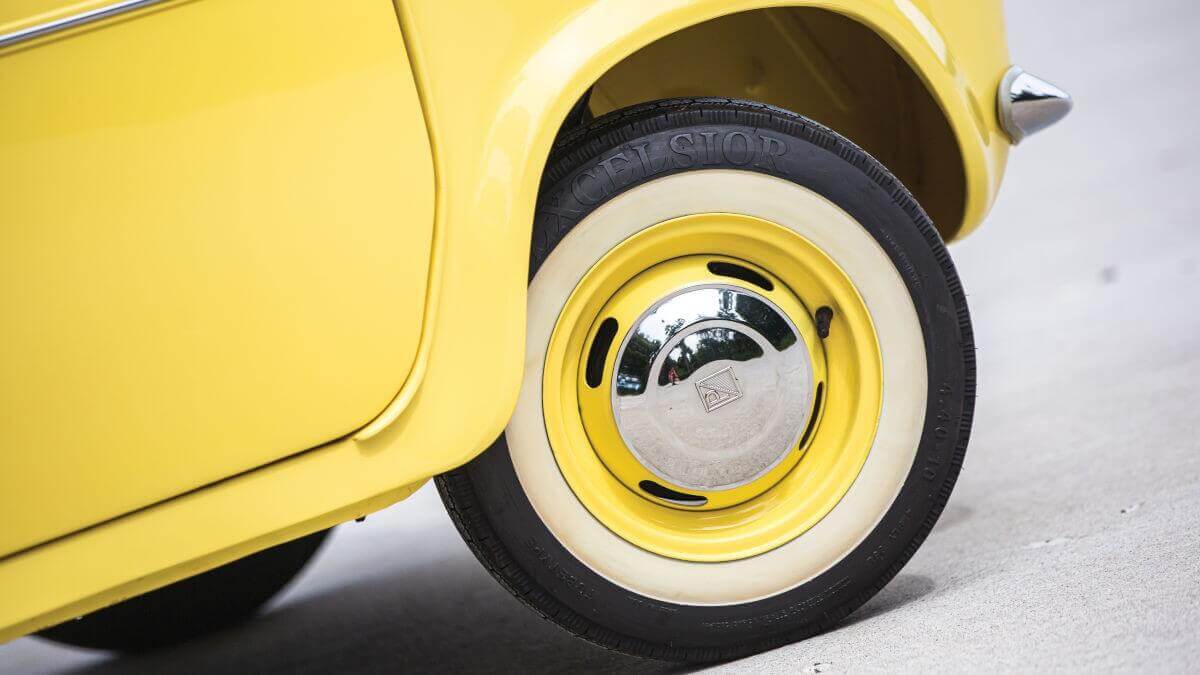 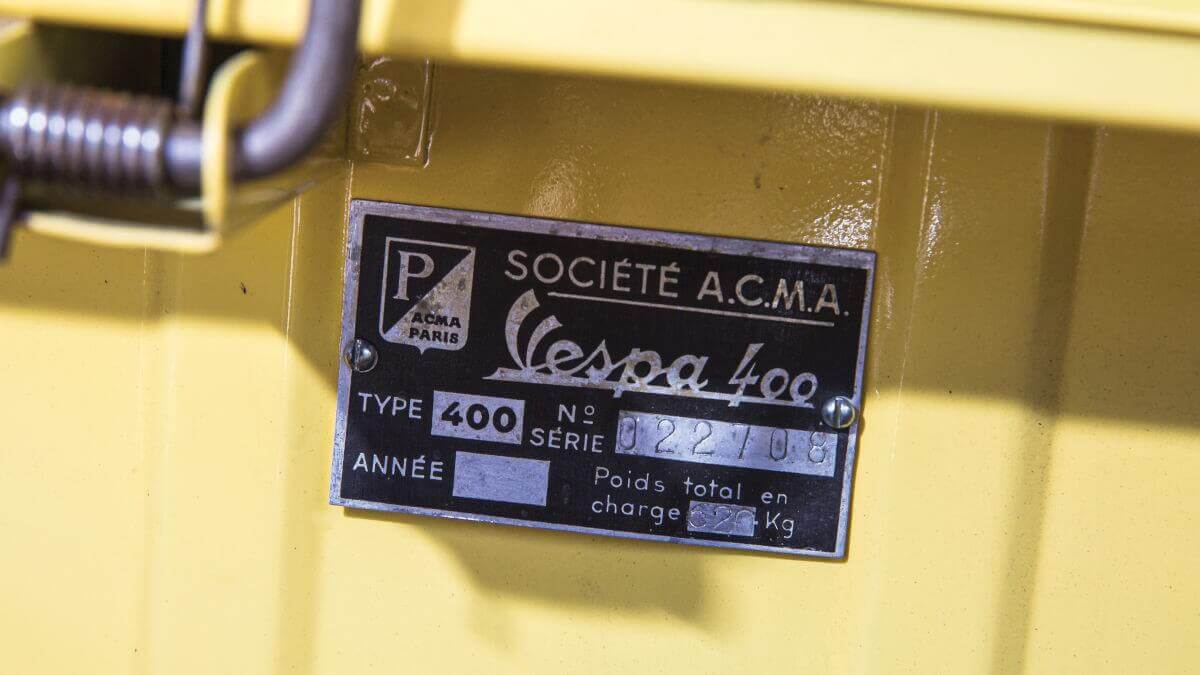 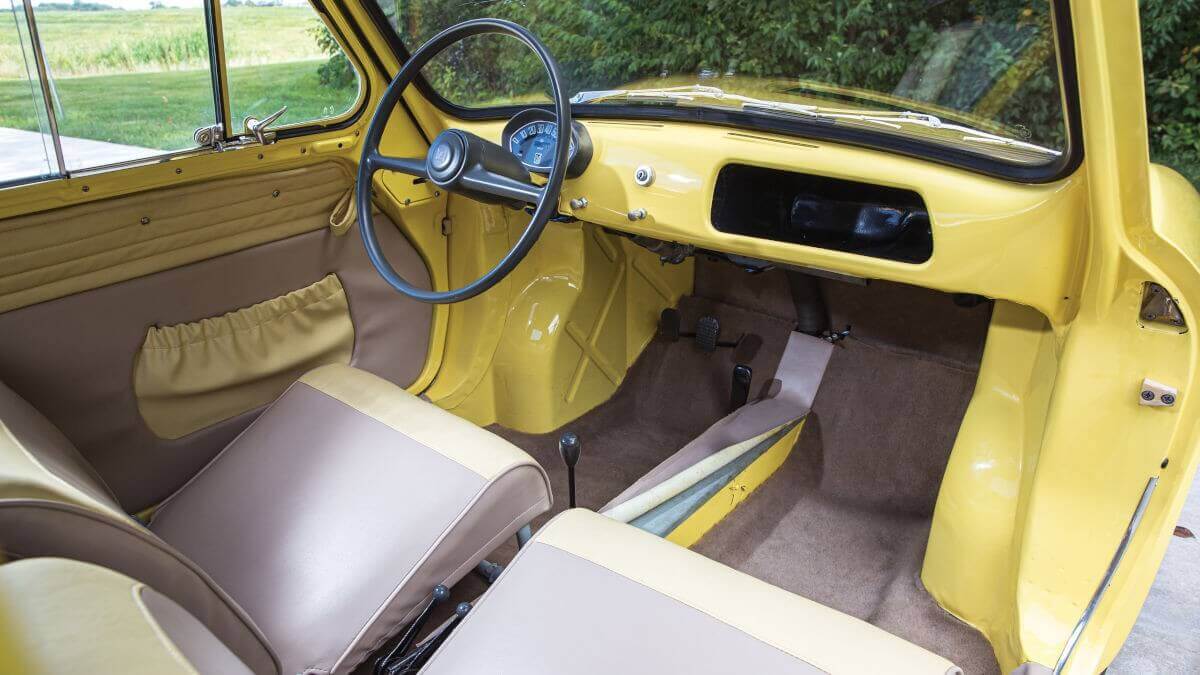 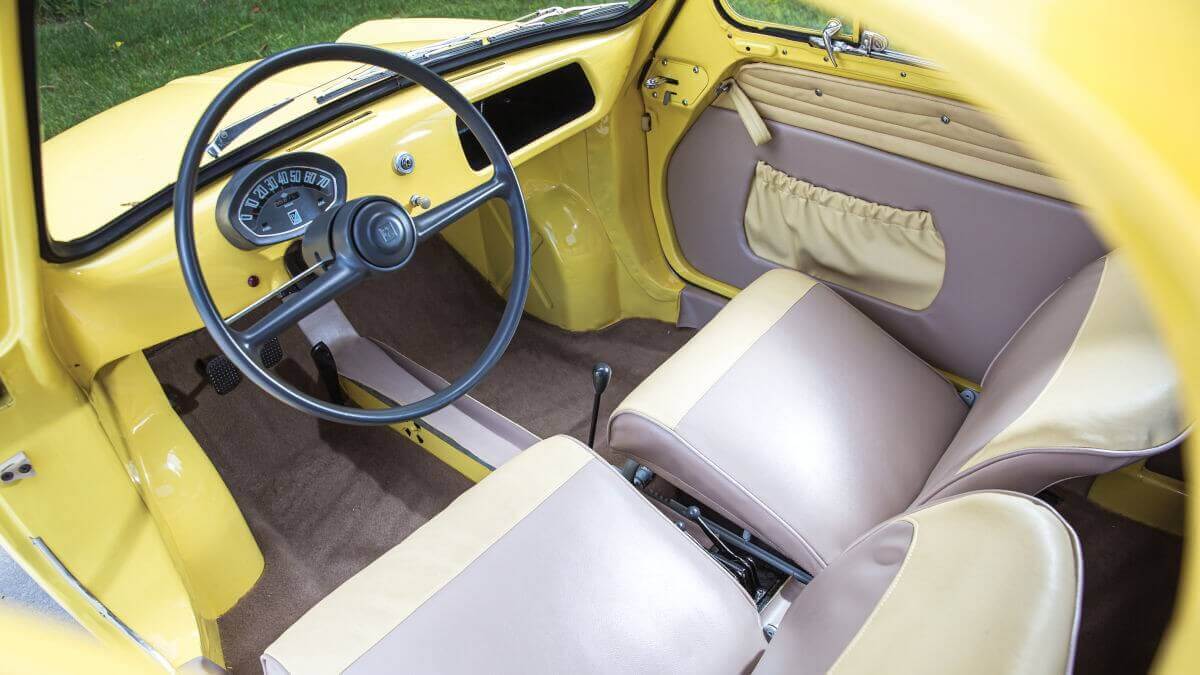 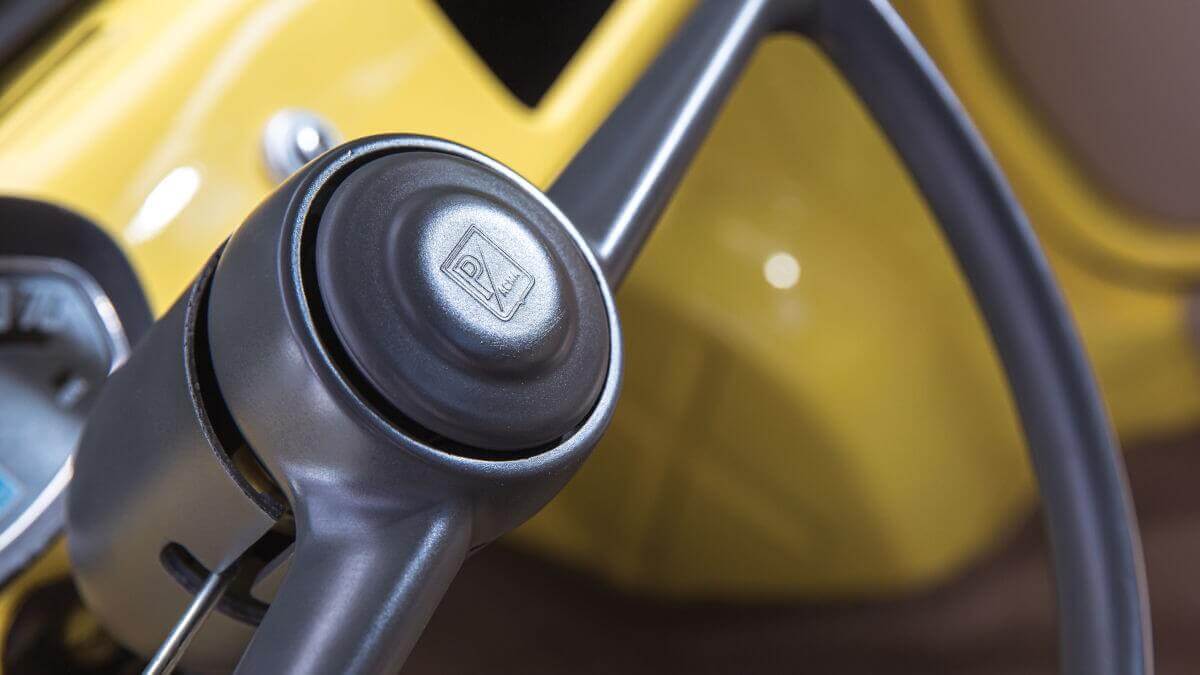 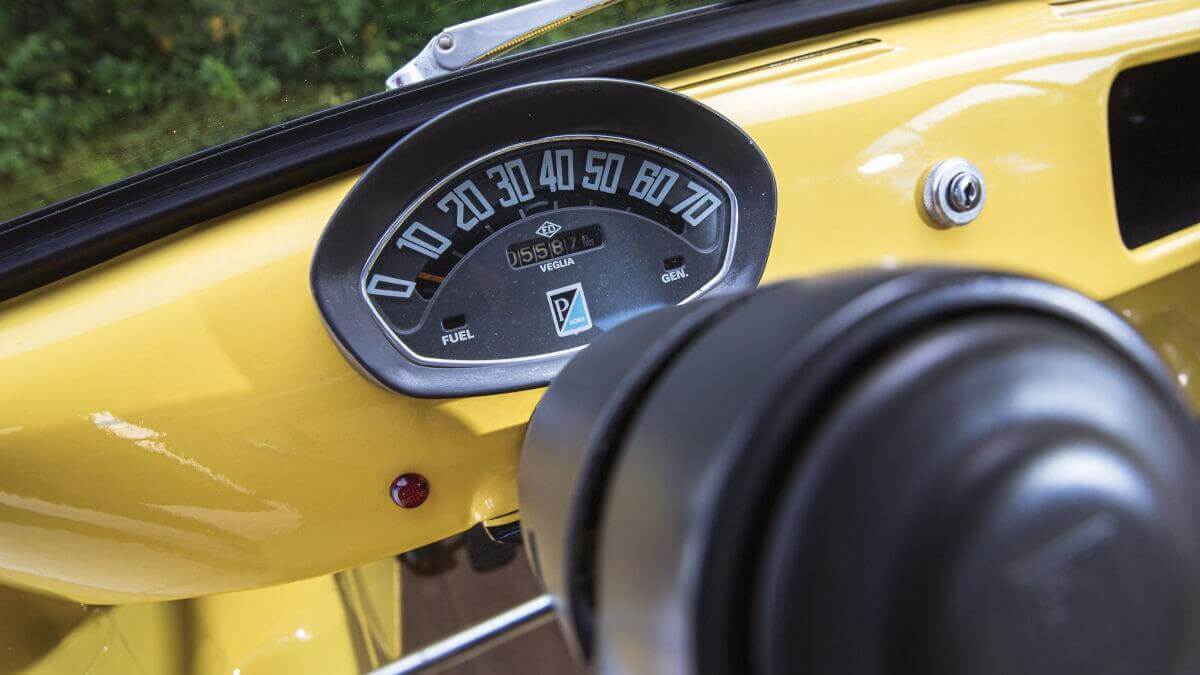 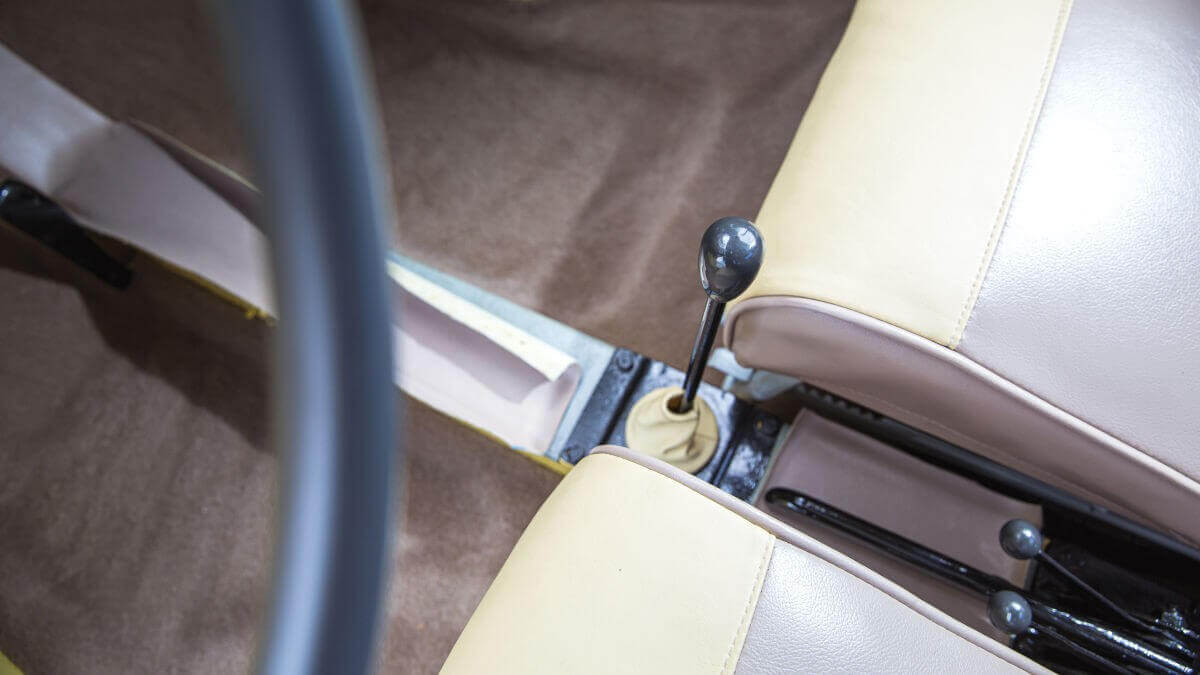 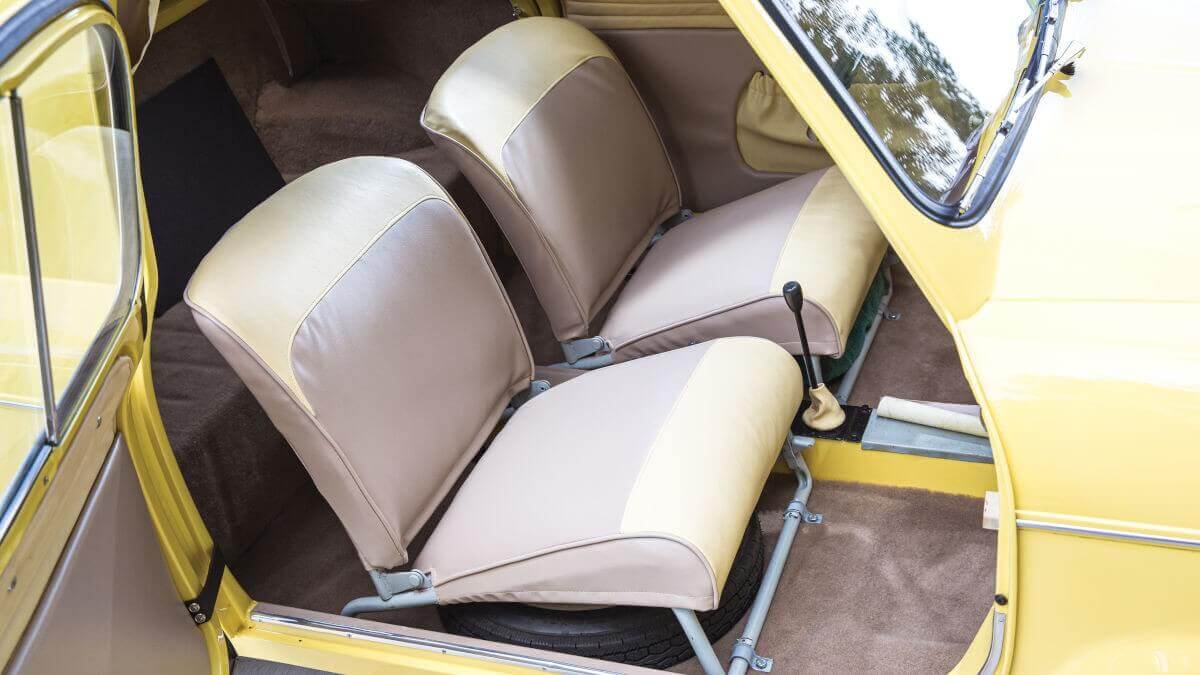 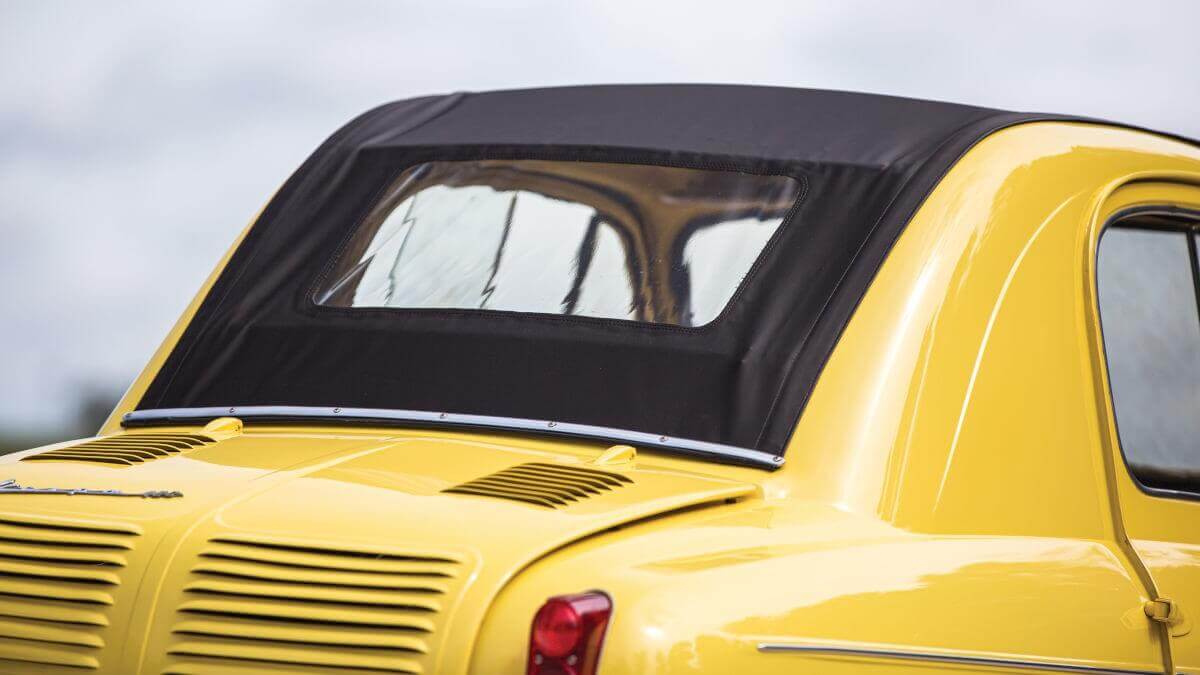 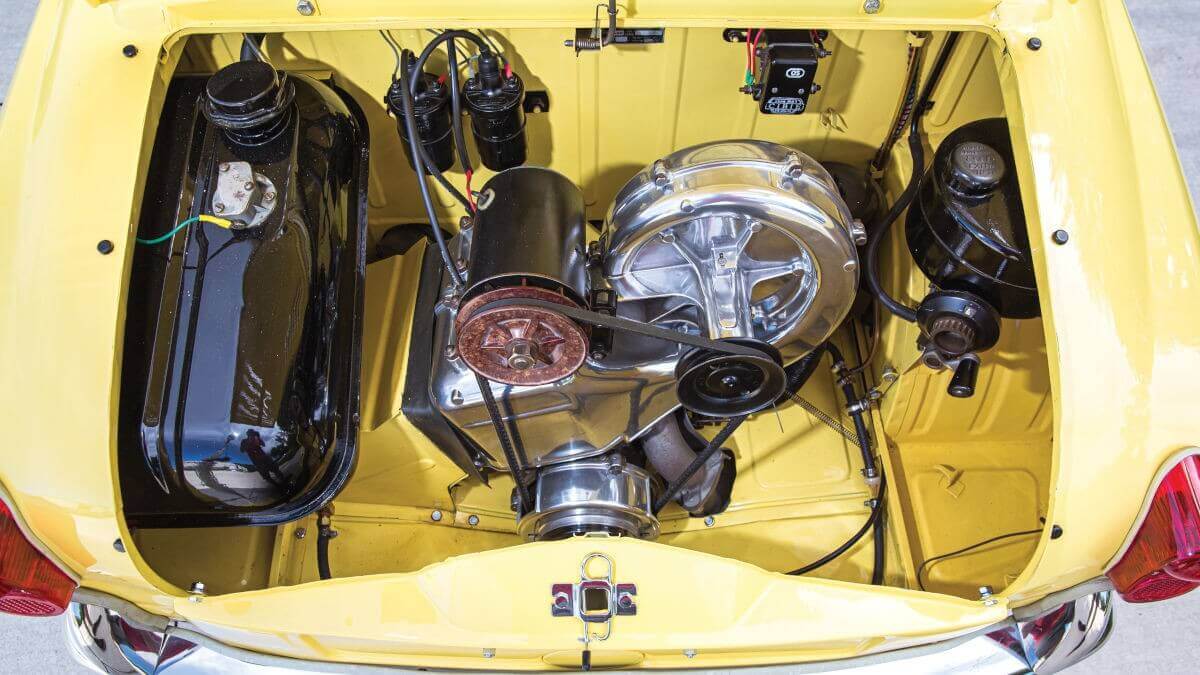 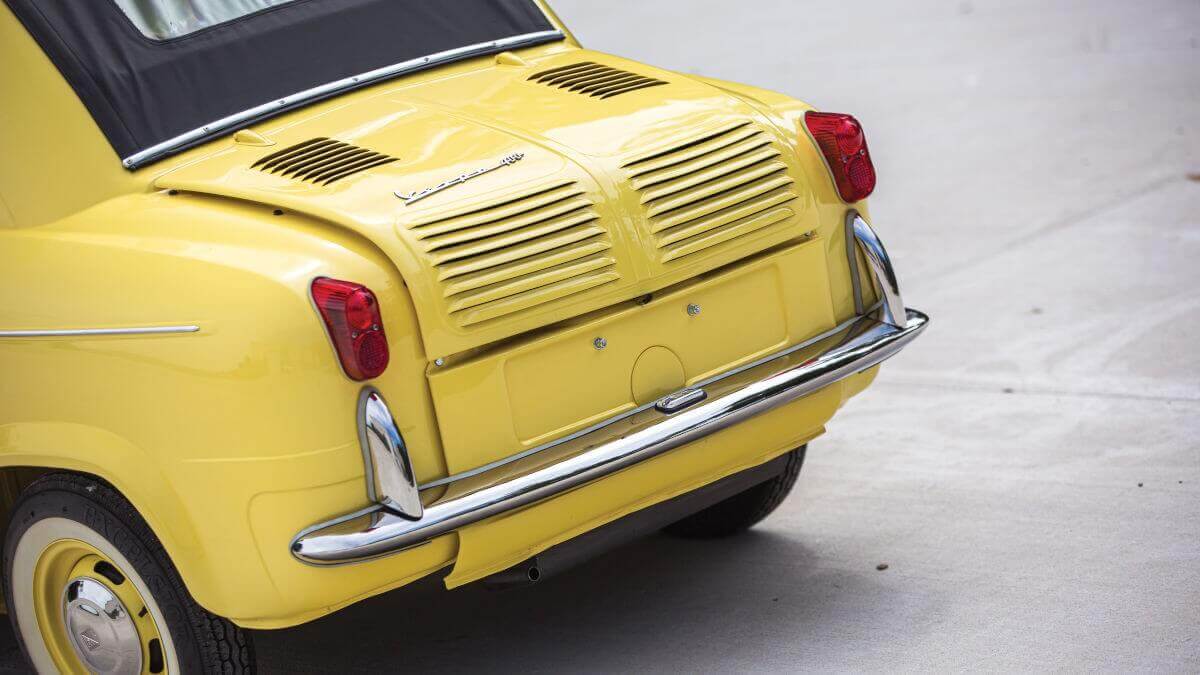 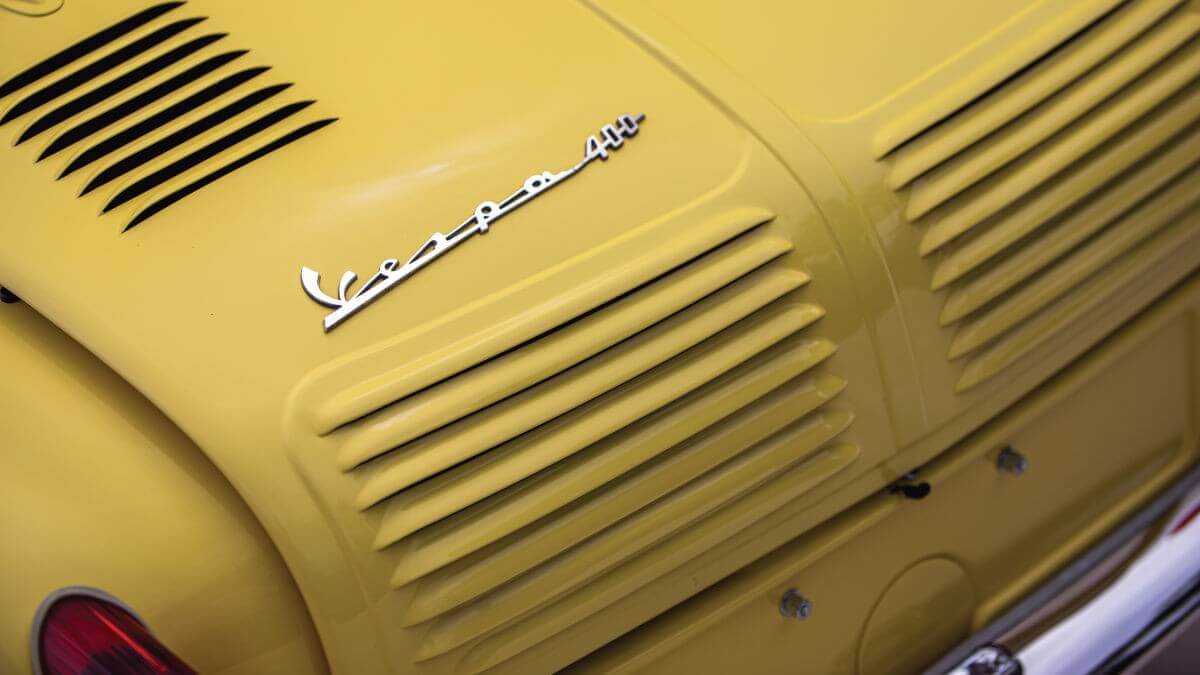 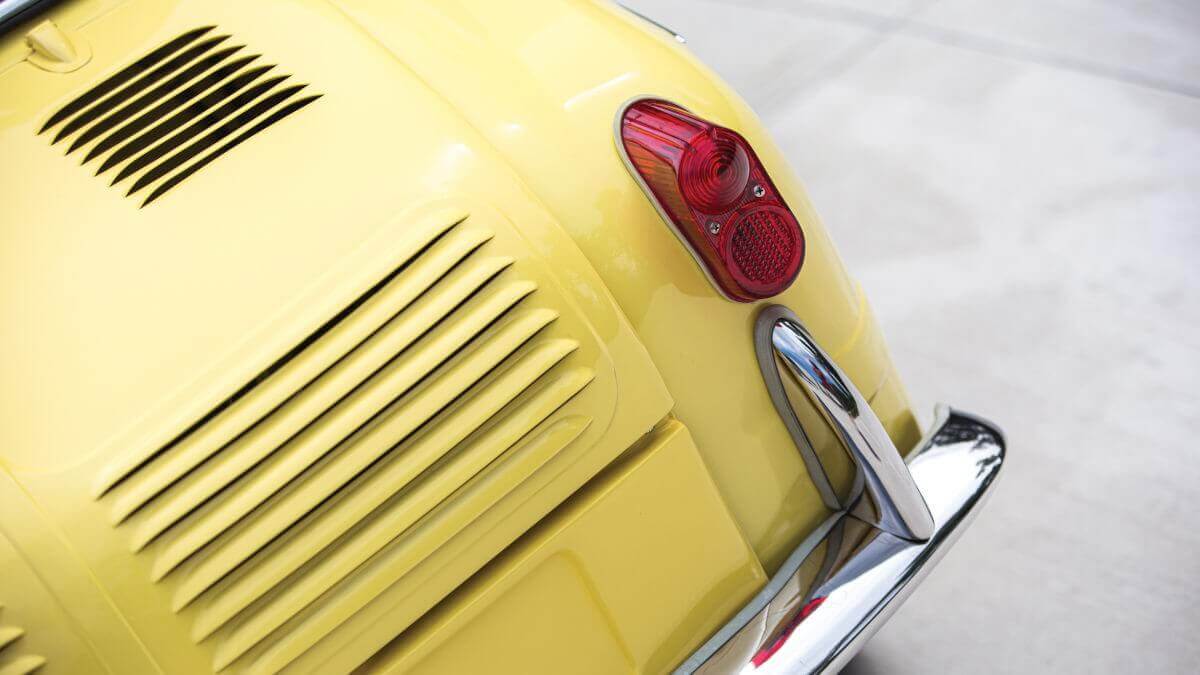 Like the Fiat 500, the Piaggio Vespa 400 also received a folding top. This included the rear window and can be rolled up like on the Citroën 2CV, while the door frames and the side roof areas are made of sheet metal. This made it virtually a convertible sedan. The rest of the bodywork follows the classic three-box shape with a front section, passenger compartment for up to four passengers with rear-hinged doors and an attached notchback in which the engine is located. This was a two-cylinder two-stroke engine with a displacement of 394 cc and 14 hp, which reached the rear wheels via a manual three-speed transmission with unsynchronized first gear. The car had a separate tank for two-stroke oil, which the driver could use to mix the required mixture of fuel in the main gasoline tank himself via a twist grip after refuelling. With an exterior length of only 2.85 meters, the kerb weight was 400 kilograms. In the final year of production, 1961, the range was extended to include the Piaggio Vespa 400 Export with 20 hp and four-speed transmission.

In addition to the two engine versions, there were two equipment lines right from the start, Above the simple ‘Tourisme’ there was the ‘Luxe’ with two wipers, more chrome trim and an interior instrument cluster. In 1959 a model upgrade was introduced which gave the car side sliding windows, a modified interior with more comfortable seats and the elimination of the two-stroke oil tank. When sales figures continued to plummet in 1961, Piaggio ceased production and from then on concentrated again on the manufacture of two-wheelers. A total of 30,076 units of the Vespa 400 rolled off the assembly line and remained mainly in Europe, although Piaggio also delivered about 1,700 units to the USA. Whether the vehicle shown in our picture gallery also belonged to this group is beyond our knowledge. It will be auctioned by RM Sotheby’s as part of ‘The Elkhart Collection’ on October 24th and should bring in between US$ 25,000 and US$ 30,000. Since this Piaggio is offered without reserve, it will go to the highest bidder in any case.