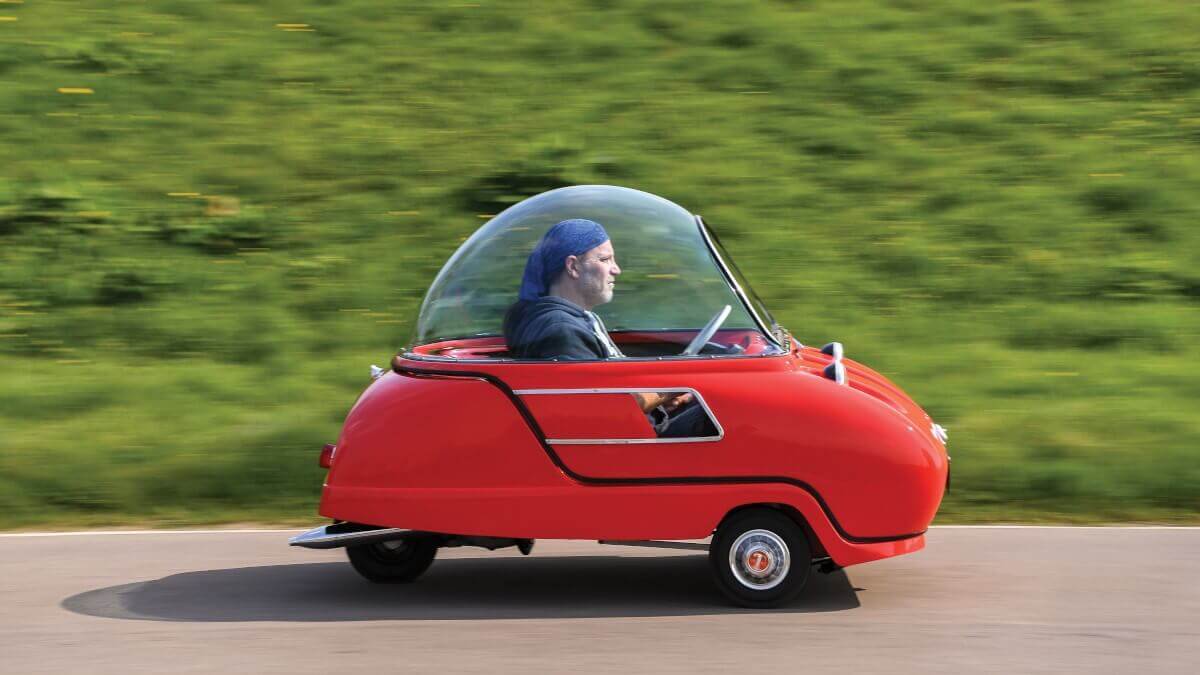 Modern cars are getting bigger, wider and more comfortable. In addition, thanks to the popularity of SUVs, they are also getting higher. Small, narrow and flat cars, nobody wants to put into the garage. That there once was a time when people were happy to have a car with a roof over their heads instead of a bicycle or a motorcycle, appears like a fairy tale from the Middle Ages. Well, at least it happened in the middle of last century, in the aftermath of World War 2. While in Germany vehicles like the Messerschmitt Karo, the BMW Isetta, the Maico, the Zündapp Janus or the Goggomobil were advertised, a company on the Isle of Man between Great Britain and Ireland tried to build the smallest automobiles in the world. In 1961, the Peel P50 finally appeared on the market, a few years too late to seriously participate in the popularity of the microcars. Thus, only about 120 copies were created until 1963.

As a successor to the single-seater P50 Peel developed the two-seater Trident. Even this model couldn’t save the brand ultimately. By the end of 1966 probably only 86 Trident had been built. Then Peel ended the business. One thing they had achieved, however: The P50 is still the smallest road-legal car that has ever been produced in series. Its successor, the Trident, is the smallest two-seater car that has ever been produced. To understand how small the Peel models were, let’s take a look at the modern Smart Fortwo. This is a tiny car from today’s perspective with a length of 2,695 millimeters in the current version. The first generation of 1998 was even a bit smaller with 2,500 millimeters. Compared to the Peel P50 one could almost speak of a stretch limousine. The single-seater is just 1,321 millimeters long, 991 millimeter wide and 1,168 millimeters high. The Trident increased the dimensions to 1,900 millimeters in length with the same width. The fact that two adults should find space under the glass dome seems highly unlikely. 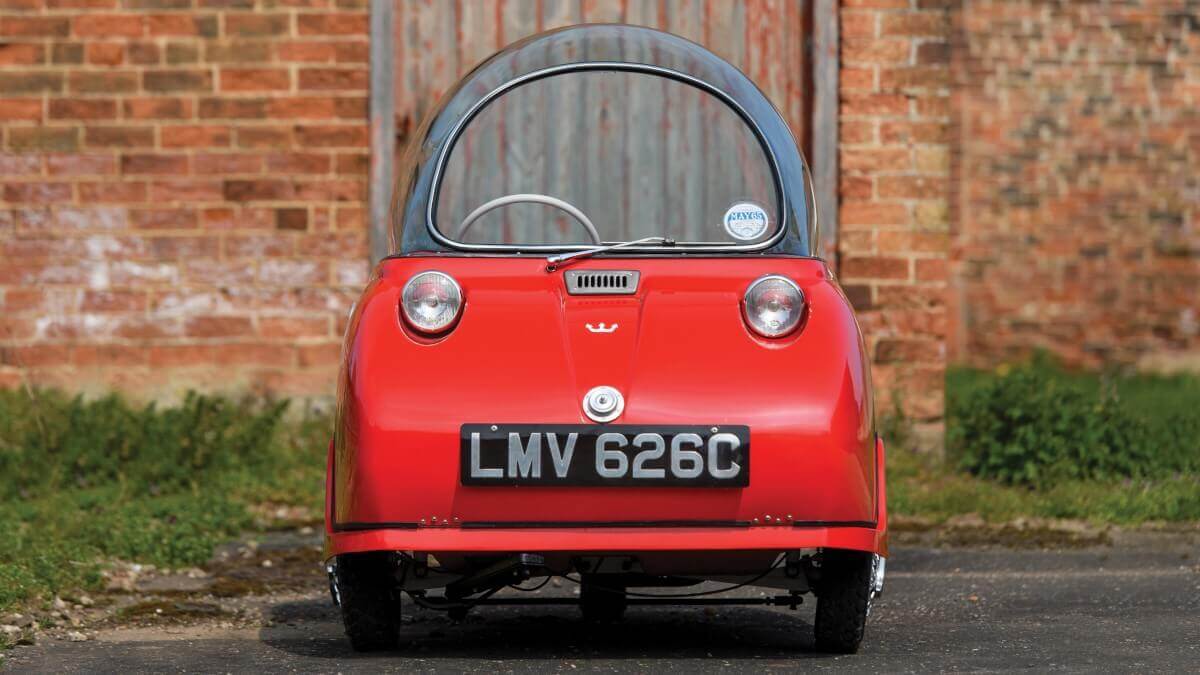 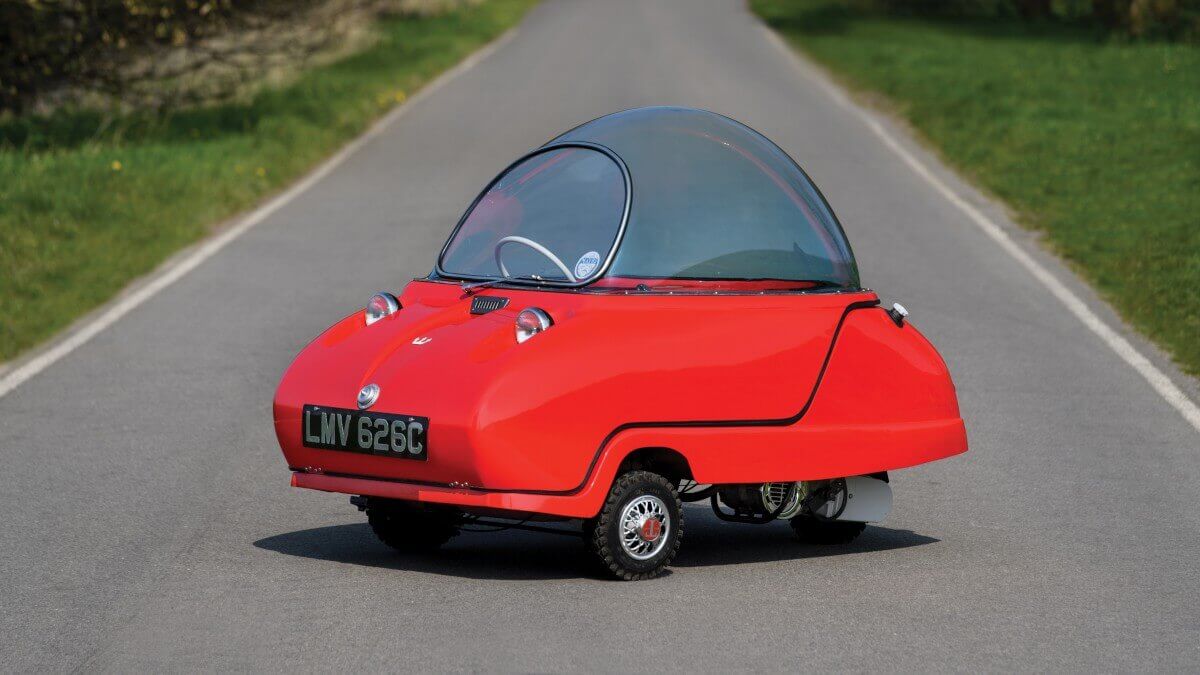 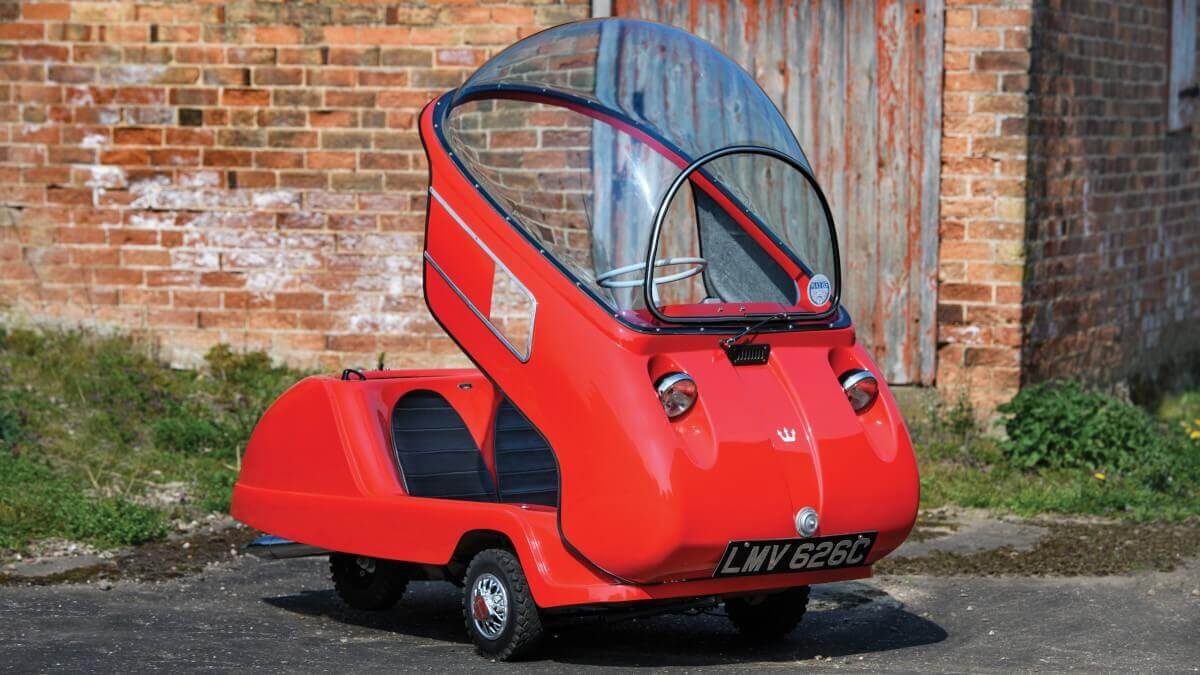 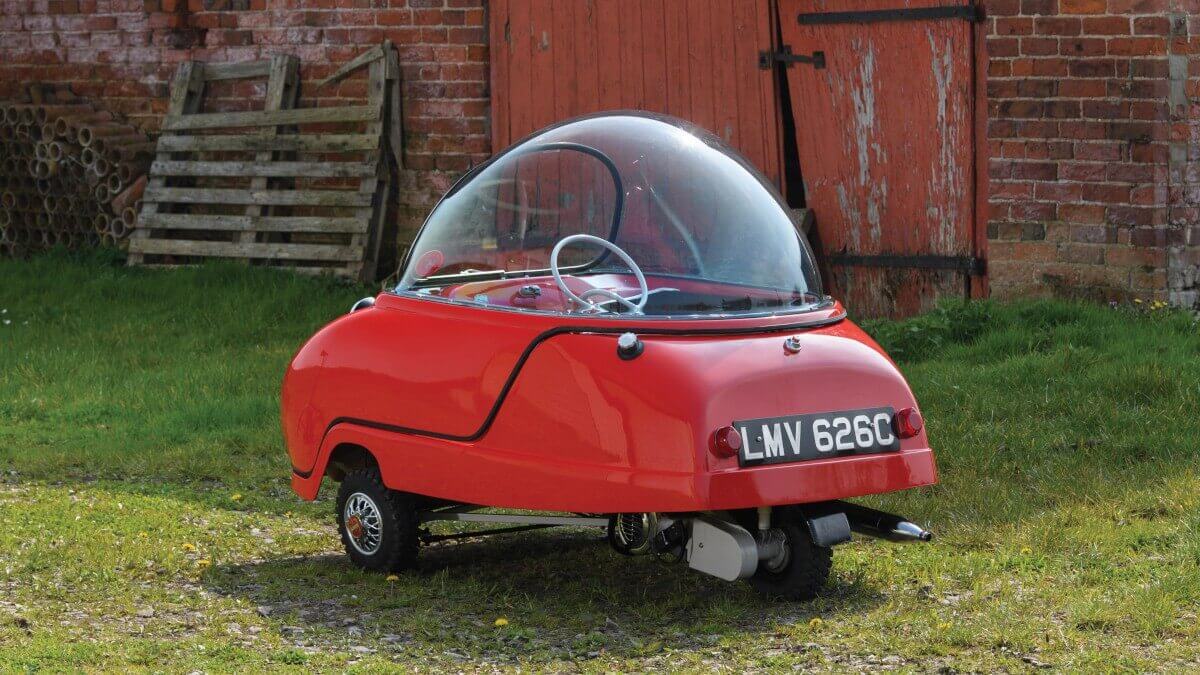 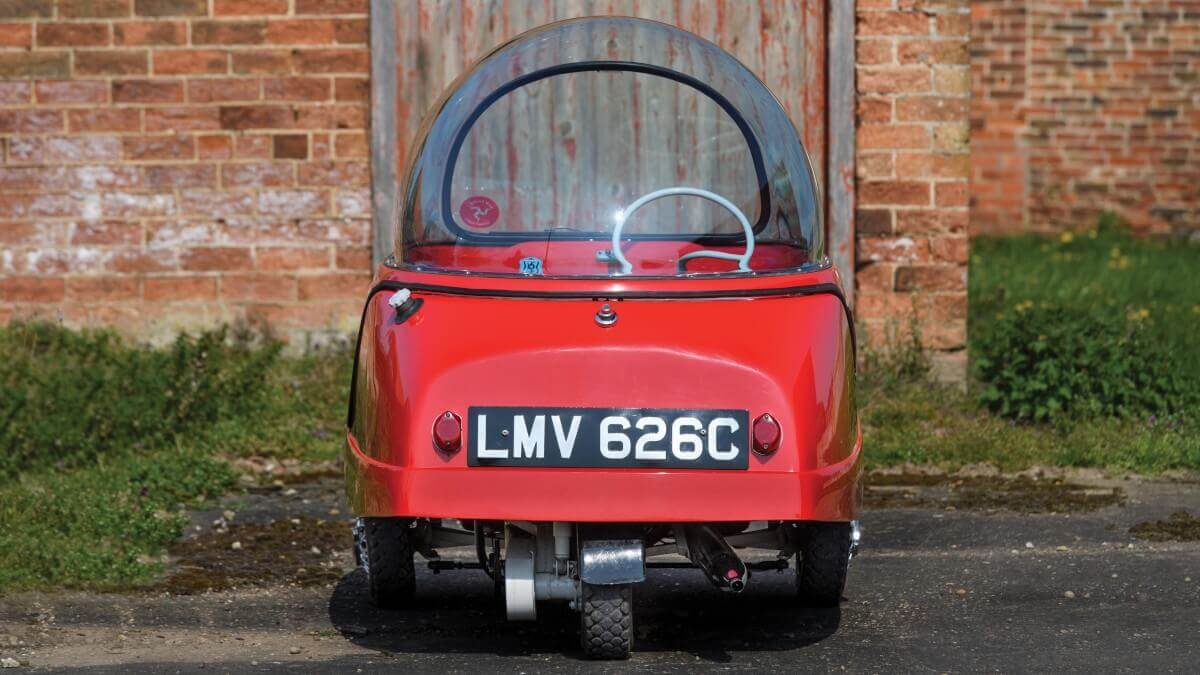 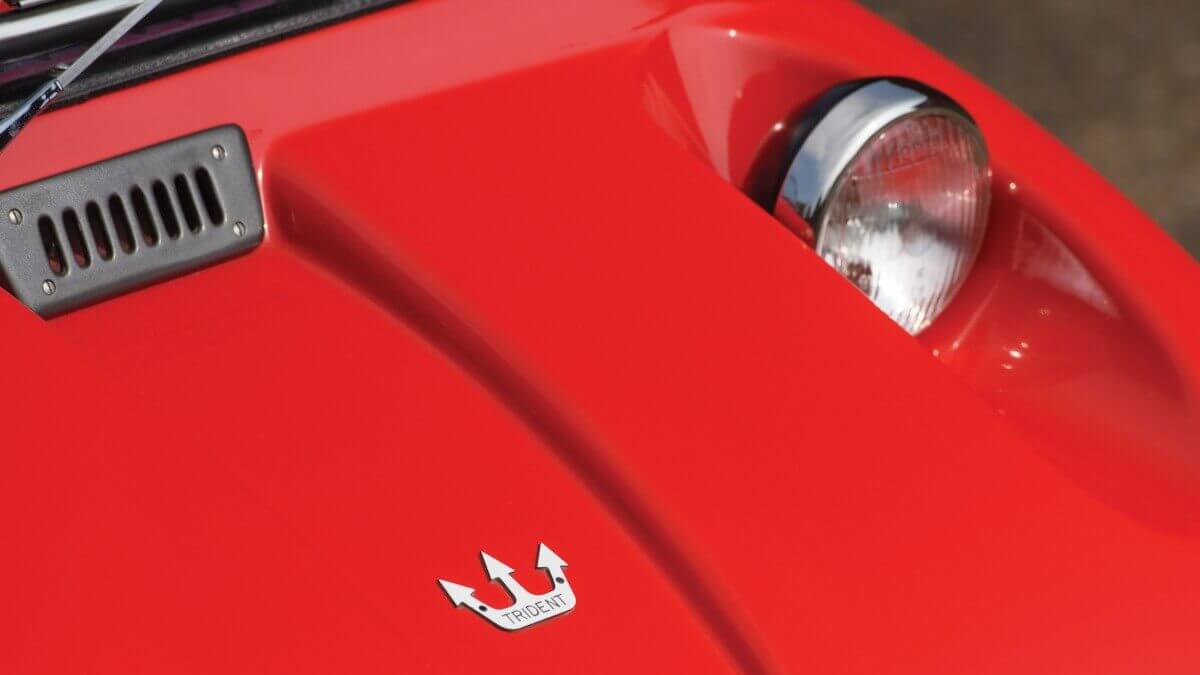 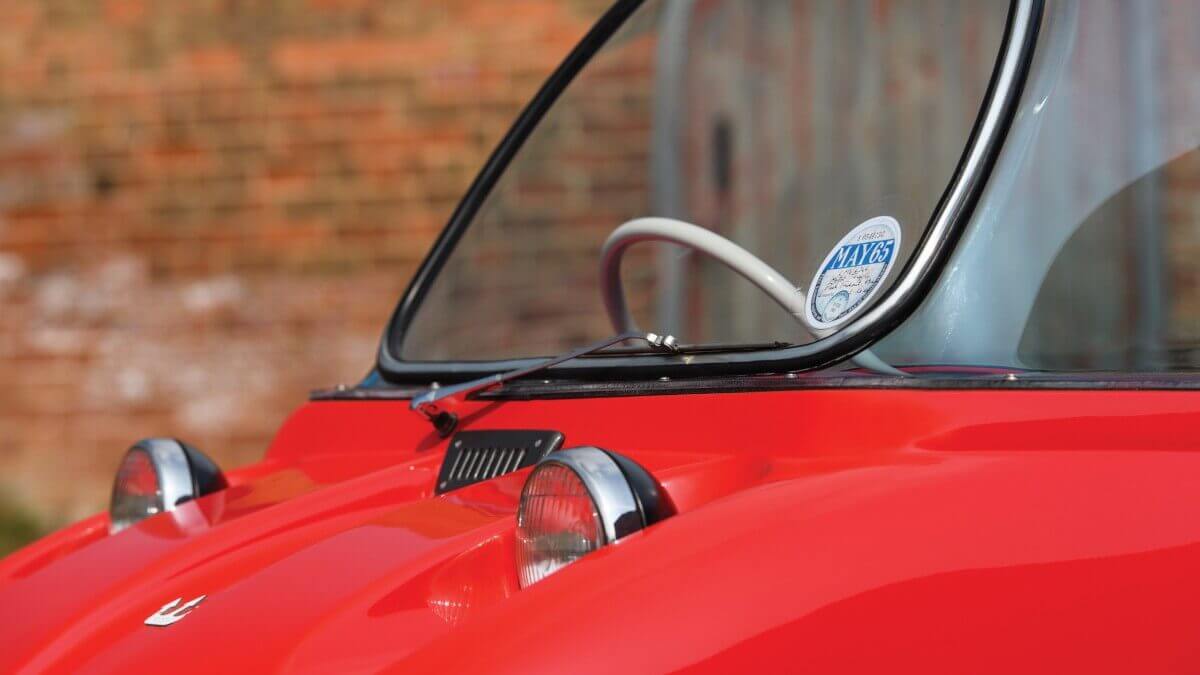 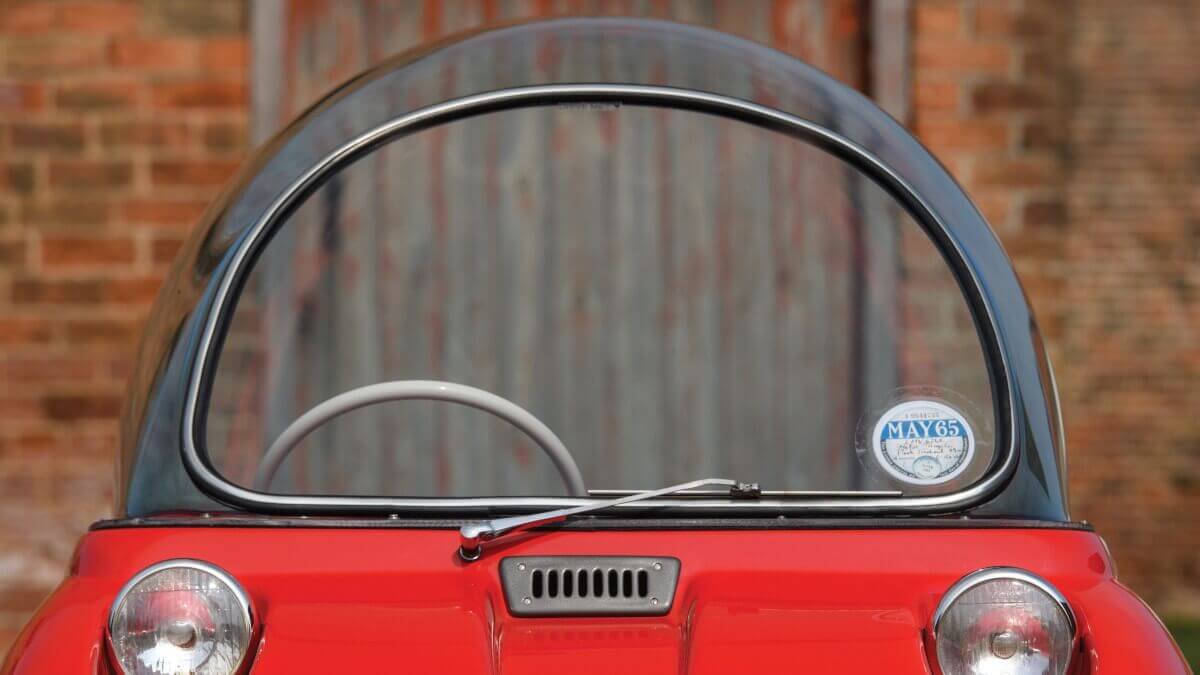 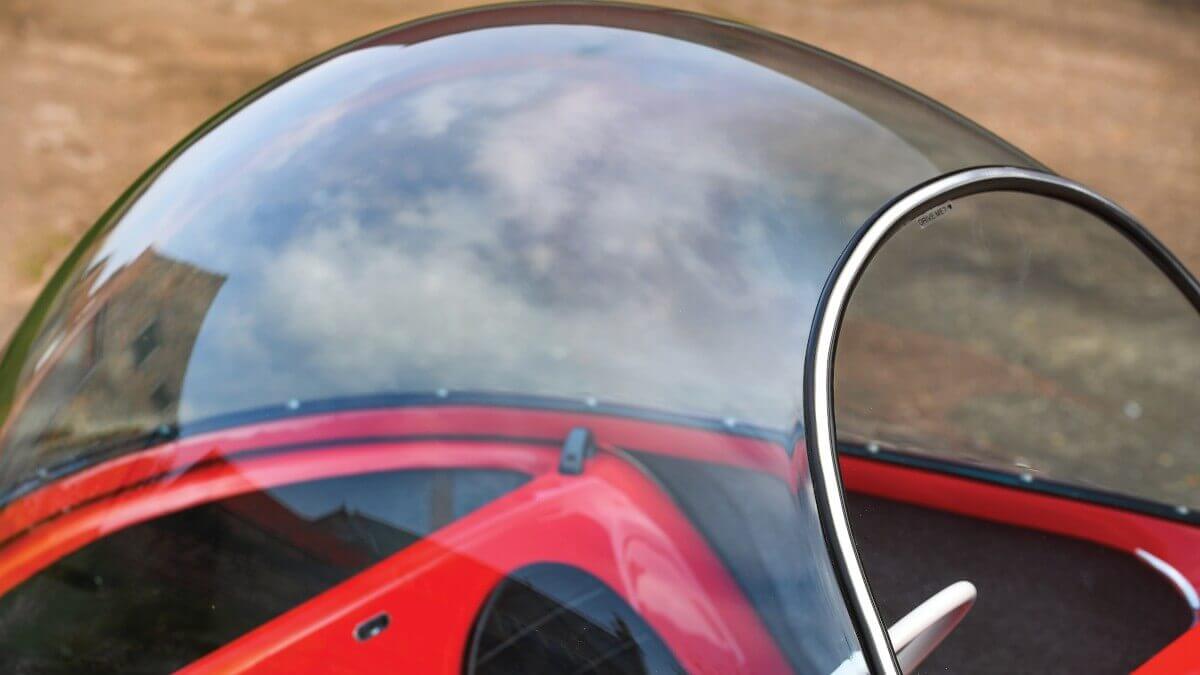 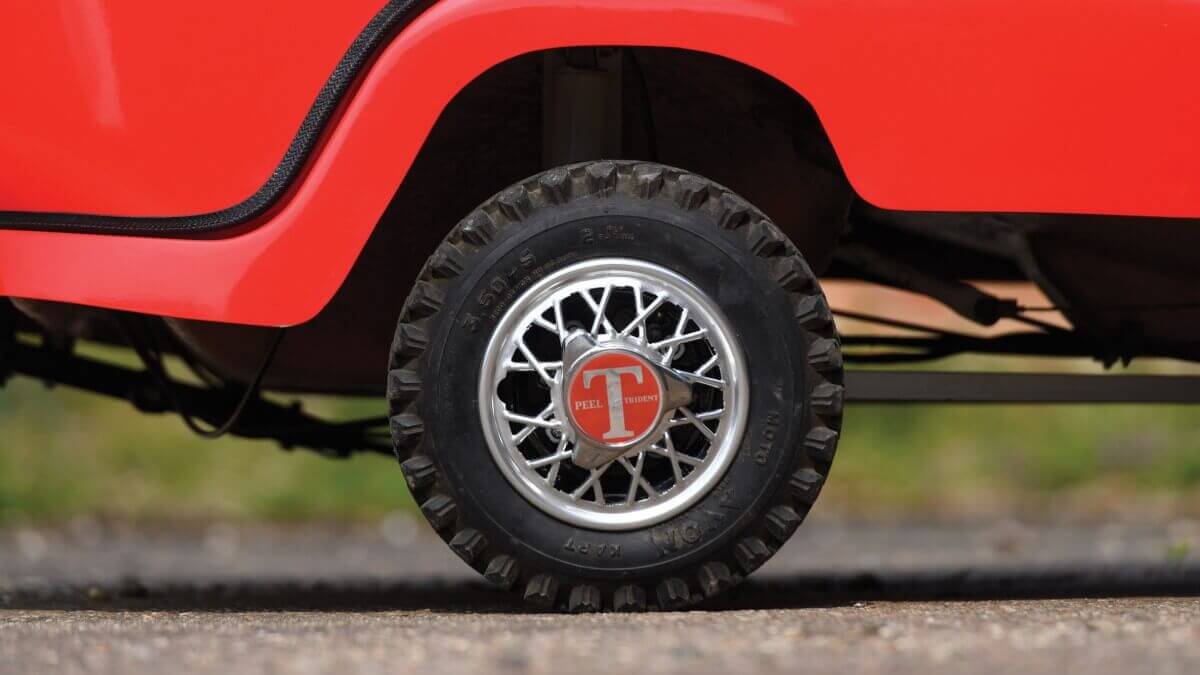 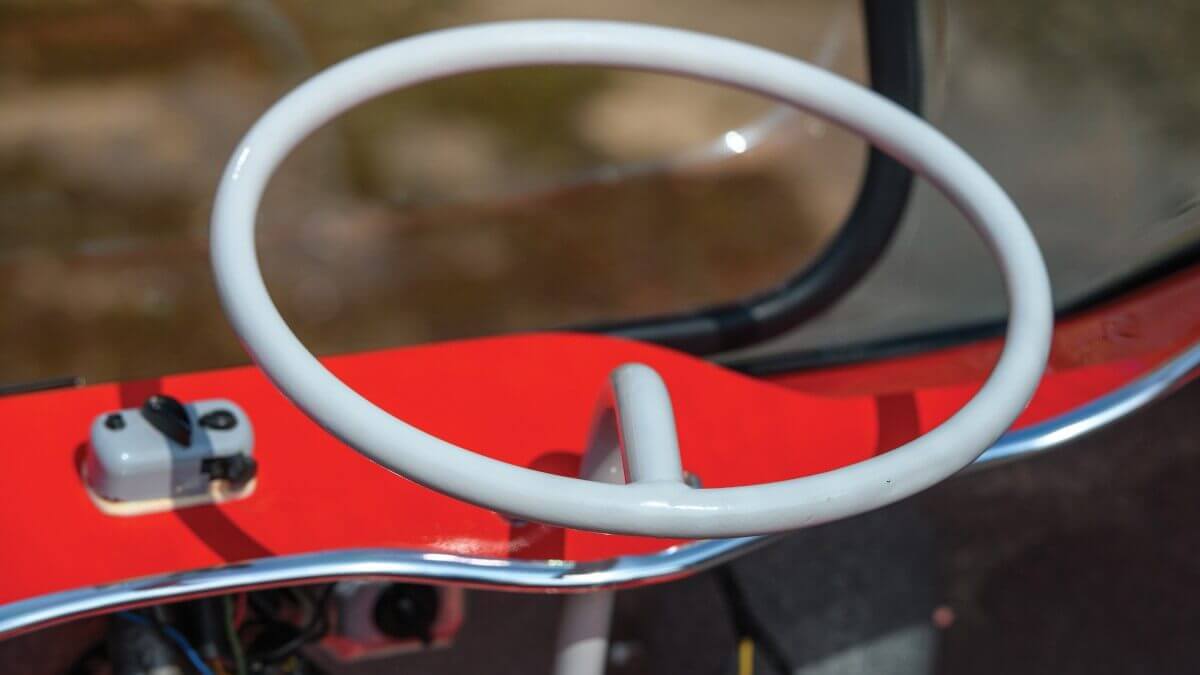 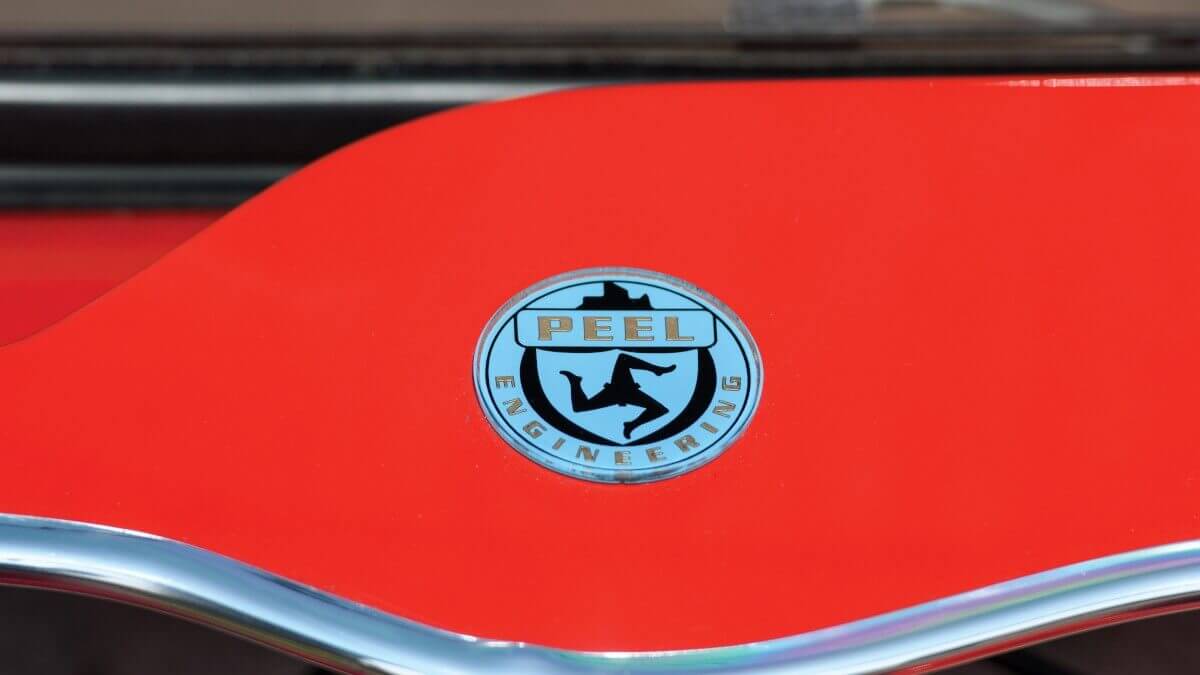 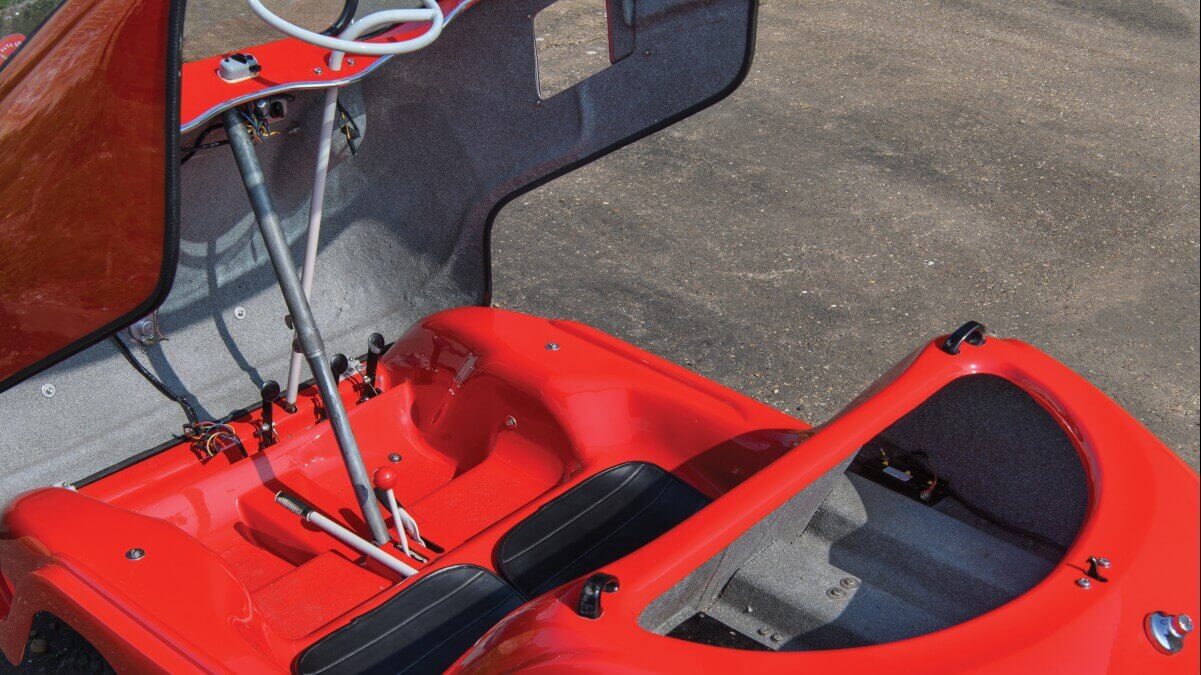 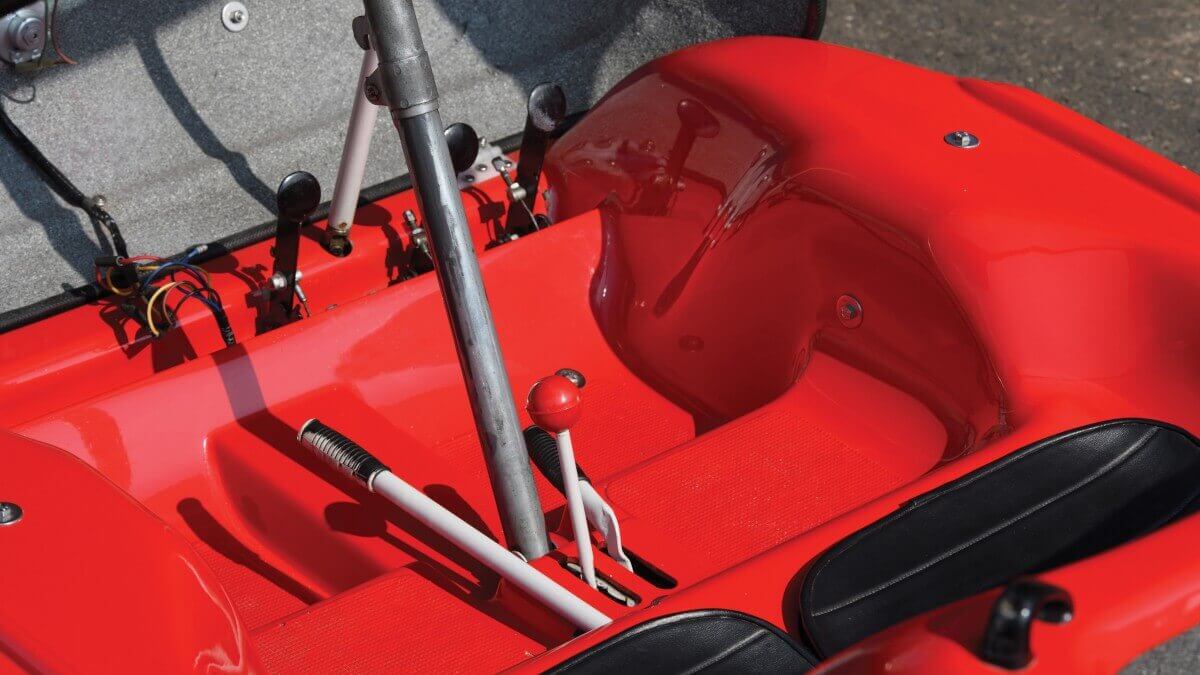 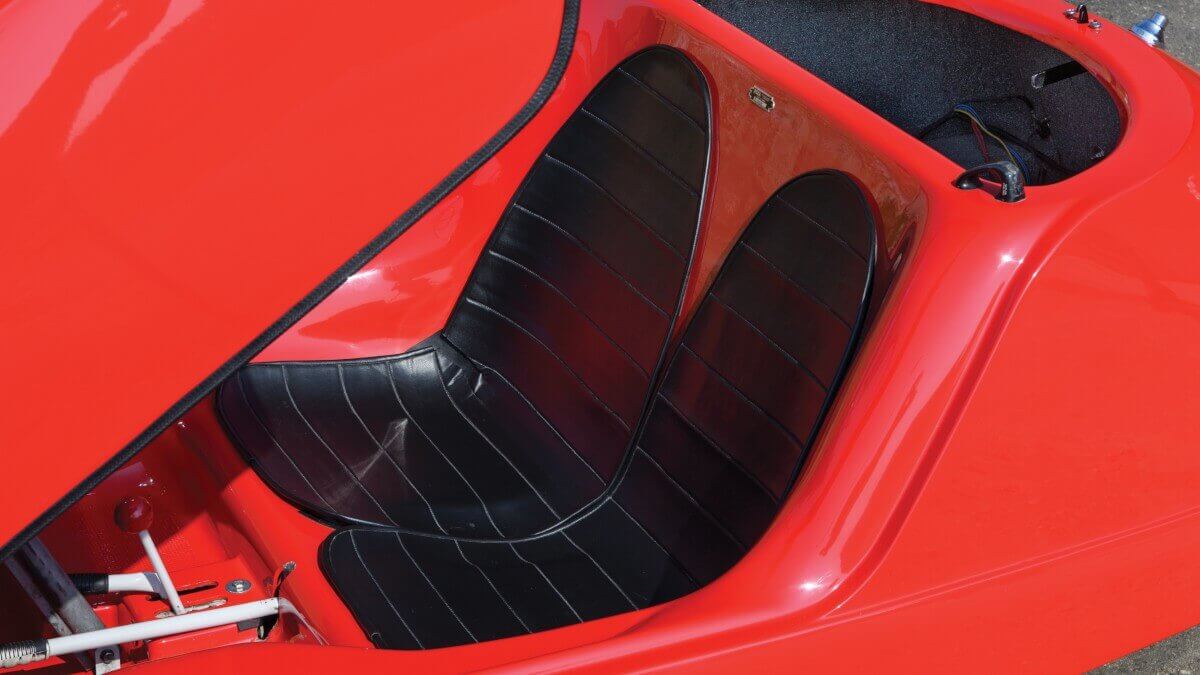 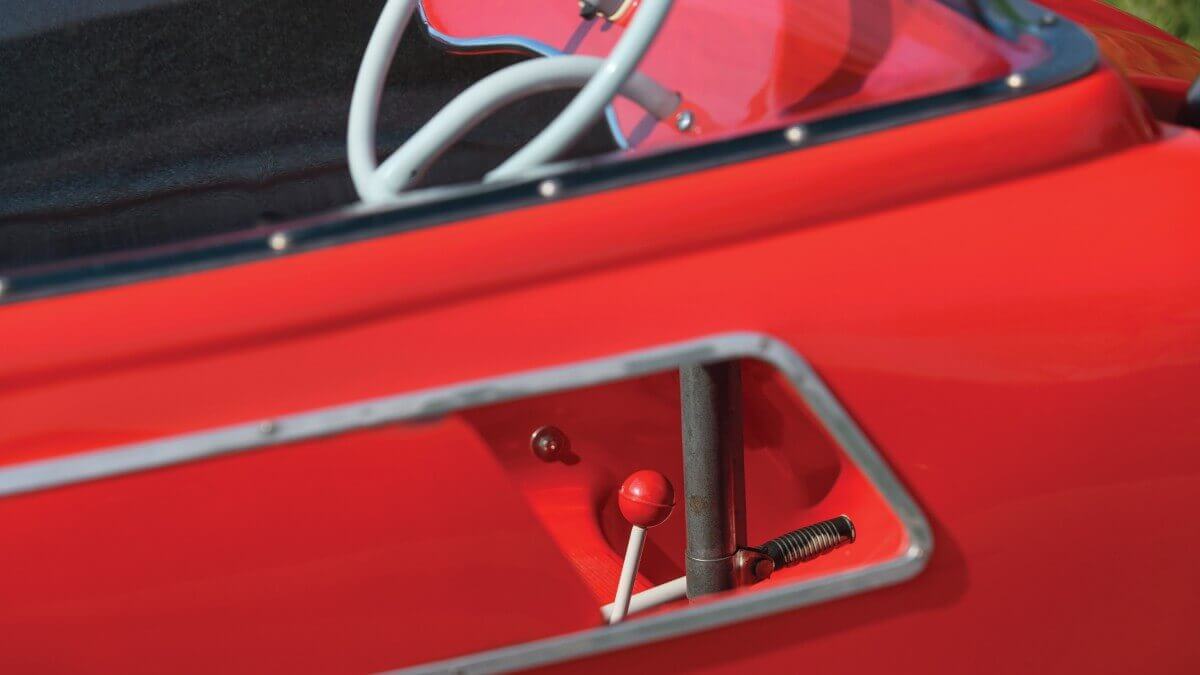 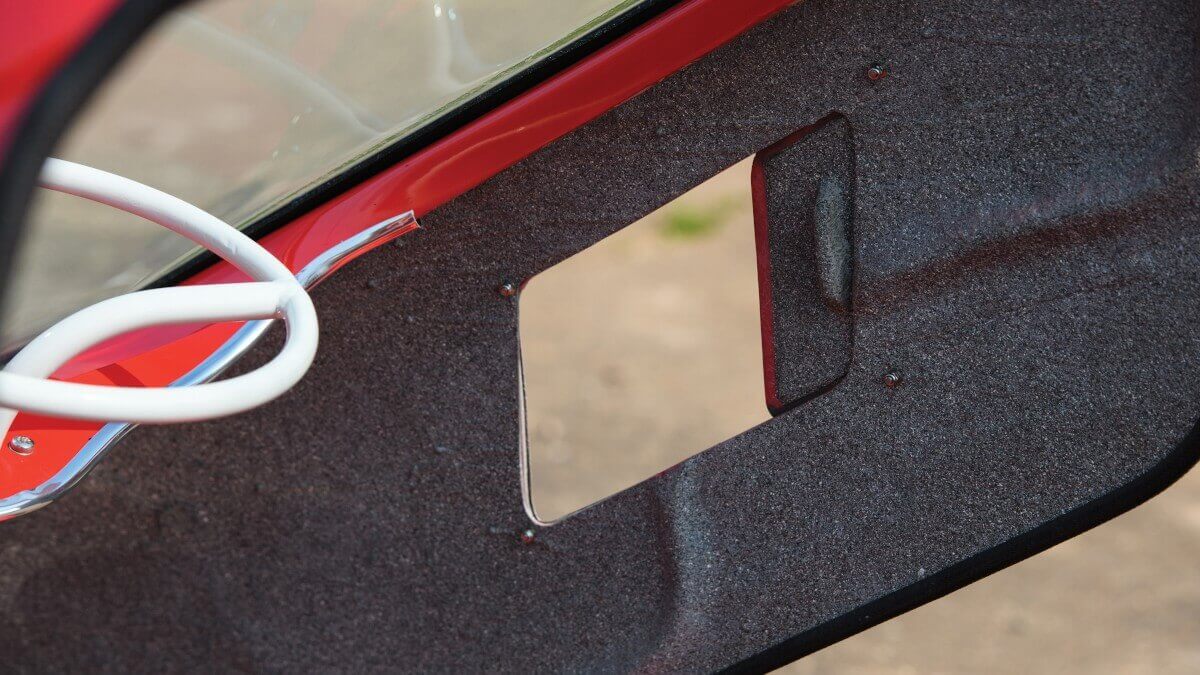 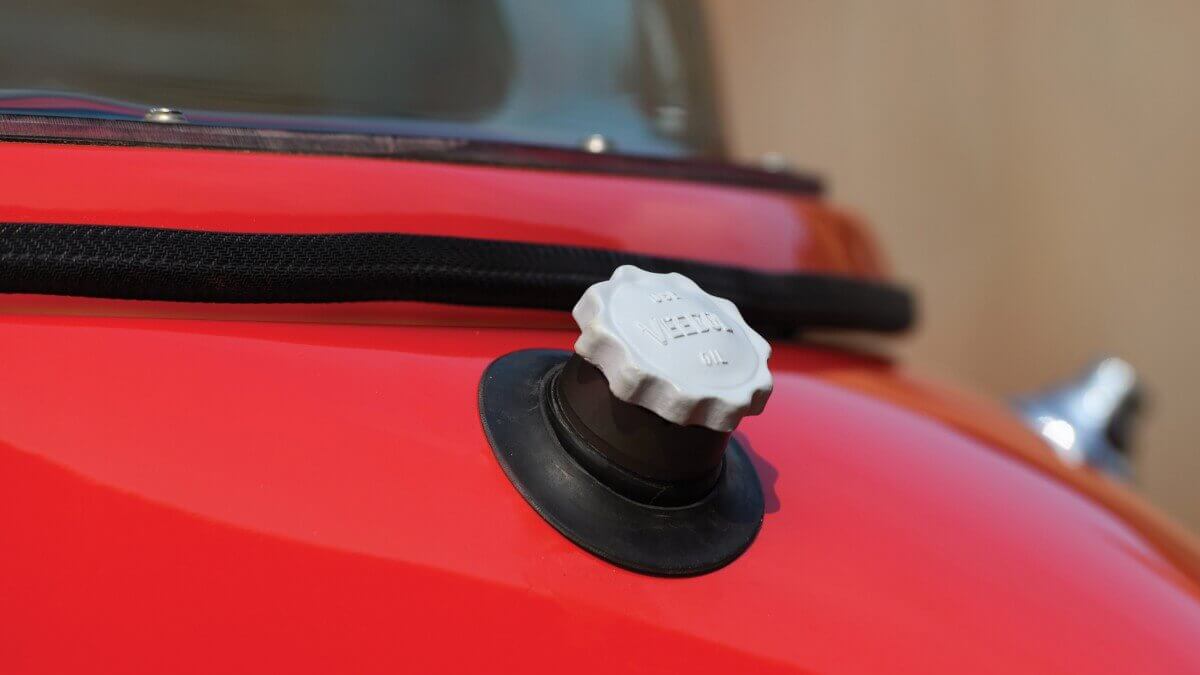 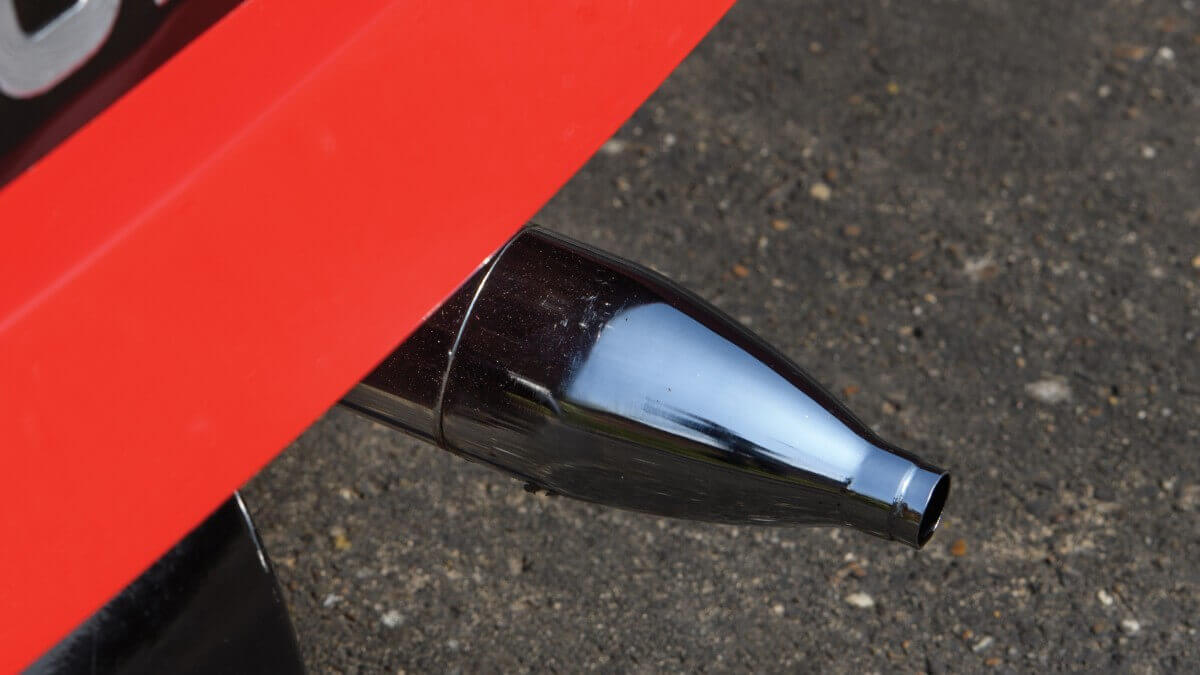 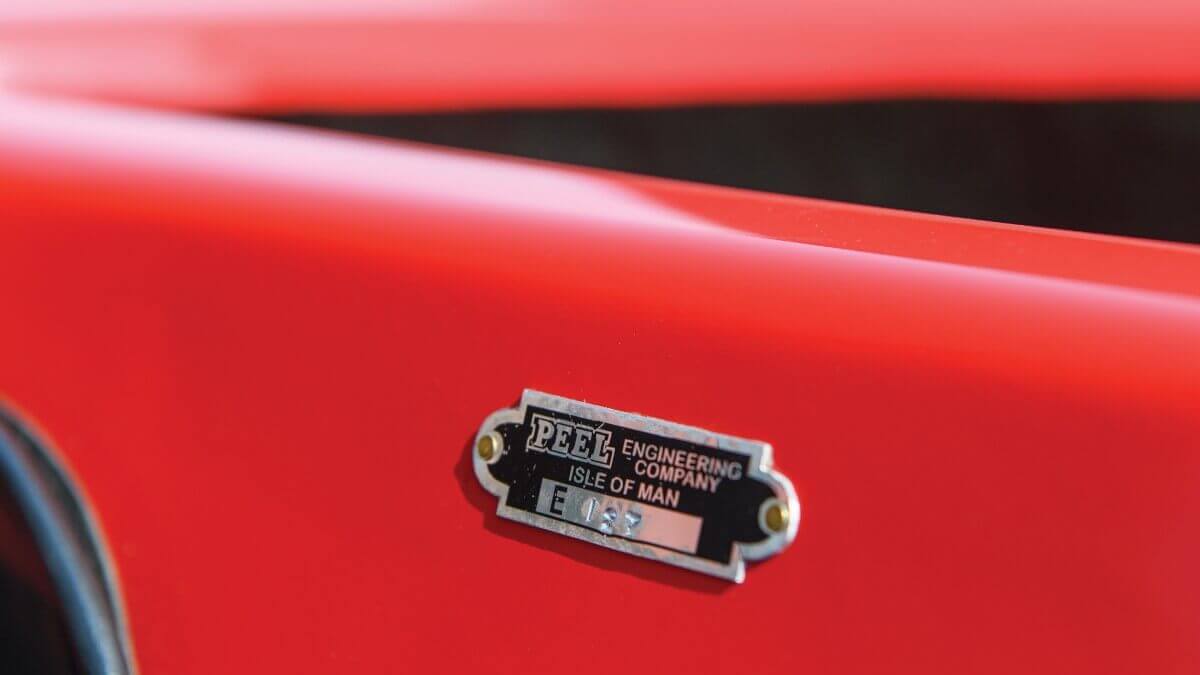 The body made of fiberglass consists strictly of only two major components: the lower shell with seats and engine mounts and the front hinged hood, which is completed by a Plexiglass cockpit. Sitting in the vehicle makes you feel a little like a goldfish in a glass, because there is no sunvisor, no retractable side window and no sunroof. If you want to reach something outside the car from the driver’s seat – for example the ticket dispenser at the entrance to a parking garage – you can slide a small area of the body on the driver’s side open below the glass canopy. Even the cockpit has absolutely nothing to do with the current flood of buttons, displays and comfort options. If you ever wanted to see a really simple steering wheel, you can take a look inside the Peel Trident: the only steering wheel spoke that springs from the steering column is welded directly to the steering wheel rim. Nothing more. No impact absorber, no buttons or switches, not even a horn. Below the windscreen on the area, which would probably have to be called a dashboard, sits a small switch, not more. Speedometer, rev counter or clock you have to bring yourself from home. How fast you are going in the Peel isn’t limited by the amount of power (there are only 4.4 hp out of 49 cc anyway), but from the courage of the driver. Although it can bring its power quite well to the single rear wheel via a three-speed manual transmission, but the construction of the car along with the minimal wheel size makes the Peel a good finder of any bump and pothole. At the same time, fuel consumption was limited due to the small engine and low speeds. In advertising texts of the 1960s, Peel wrote: “Almost cheaper than walking.”

Since 2008, new examples of the Peel P50 are built, based on the original shapes. In 2011, also the production of the Trident started again. Both are available either with modern moped engines or with electric drive. Due to the somewhat tricky driving style of the tricycles and the low practicality, the demand still keeps within narrow limits today. But the few surviving original copies are now in high demand among collectors worldwide. For example, the Peel Trident shown by us, one of the first ten vehicles produced, will undoubtedly find a new owner at RM Sotheby’s auction during Monterey Car Week in August. This is already ensured by the fact that it is auctioned without reserve. In what price range (estimate) the highest bid is expected, hasn’t been stated by the auction house so far.