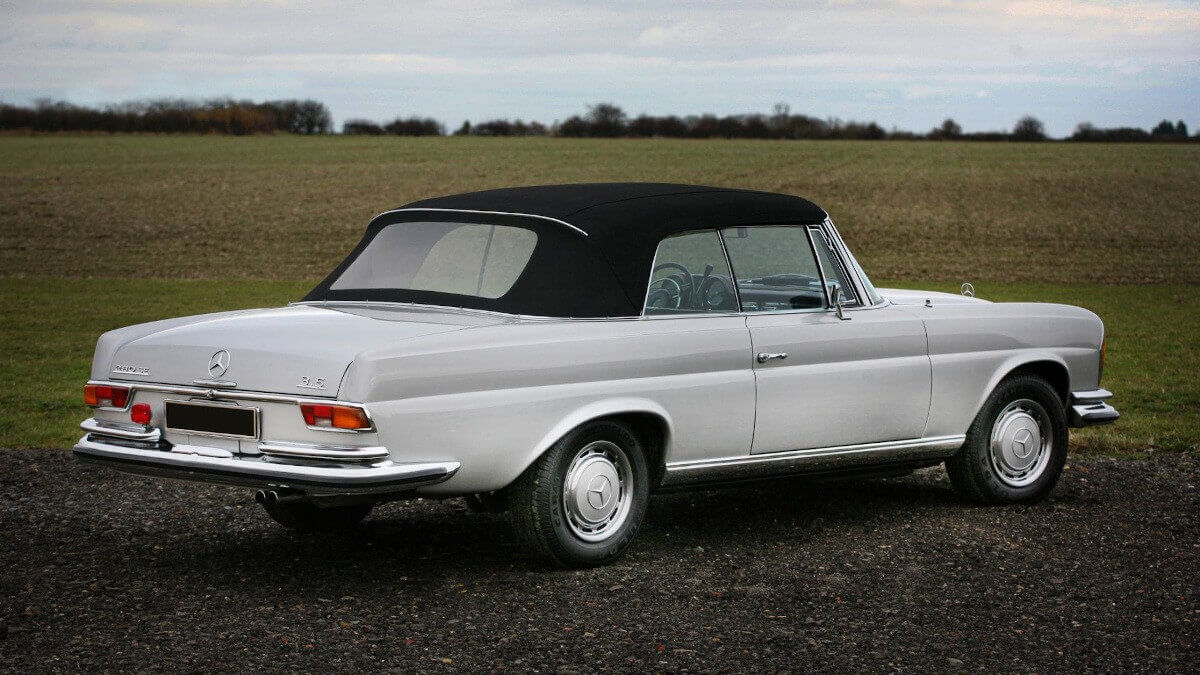 In 1959, the W 111 series made its debut at Mercedes-Benz, today classified as one of the forerunners of the S-Class in the luxury automobile class. In addition to the classic sedan, there was the ‘Universal’ station wagon built by I.M.A. in Belgium in 1966 and ’67 on behalf of the factory, as well as the Coupé from spring 1961 and the Cabriolet from autumn 1961. Both were based on the sedan’s unshortened platform and therefore offered more then enough space for four passengers. Optically, they were based on the four-door model, but had completely independent bodyworks without the use of identical parts. Instead, the vast majority of exterior parts were produced by time-consuming manual labour, which significantly increased the production time compared to the sedan. As a result, prices were almost doubled. Apart from the 600 (W 100), the Coupés and Cabriolets of the W 111 and W 112 series (the latter with air suspension) were the last models from Mercedes-Benz to be made predominantly by hand.

From 1961 to 1965, both two-door models were available exclusively with a 2.2-liter inline six-cylinder engine with Bosch injection system and 88 kW/120 hp under unusual official sales designation 220 SE(b)/C. These abbreviations were abandoned in 1965 with the introduction of the 110 kW/150 hp strong 250 SE. At the end of 1967, the 280 SE with 118 kW/160 hp followed and from 1969 Mercedes-Benz offered the new top model 280 SE 3.5 with a 3.5 liter V8 engine and 147 kW/200 hp. It was the first post-war Mercedes model with a displacement of more than three liters. Compared to the smaller engine, this model had a flatter and wider radiator grille (also introduced on the 280 SE at the same time), which led to the unofficial name ‘Flachkühler’ (flat radiator) in Germany. Until the end of 1967 the 300 SE with air suspension, additional chrome parts, power steering and finally up to 125 kW/170 hp thanks to a six-piston injection pump was placed above those versions in the model series W 112. A total of 28,918 Coupés and 7,013 Cabriolets of the W 111 series left the production in Sindelfingen until 1971. While the Cabriolets originally were only about ten percent more expensive than the Coupés, today they are many times more valuable due to their rarity. It took Mercedes-Benz more than 20 years before they again included a four-seater convertible in their model range. 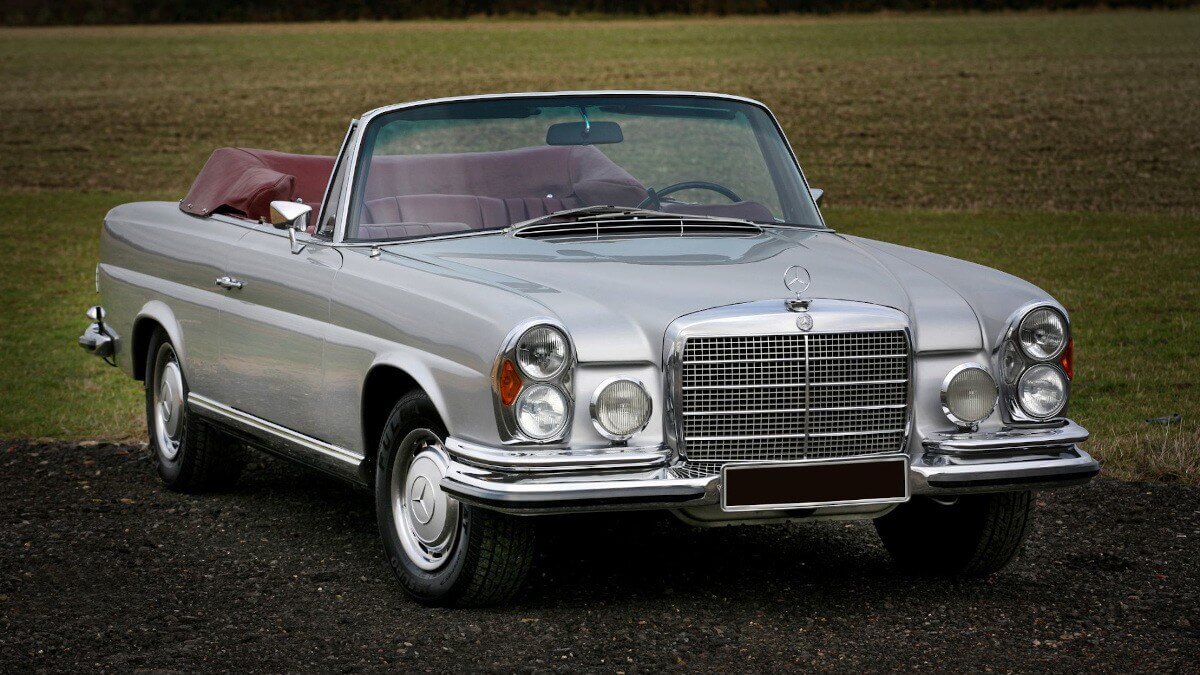 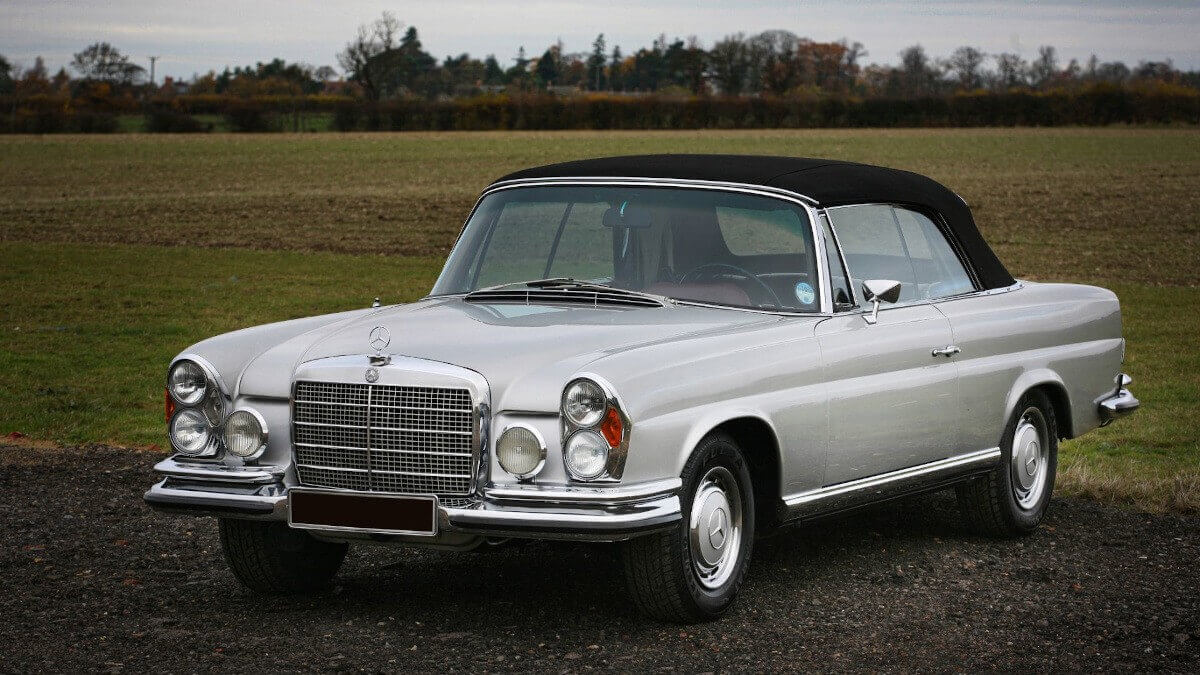 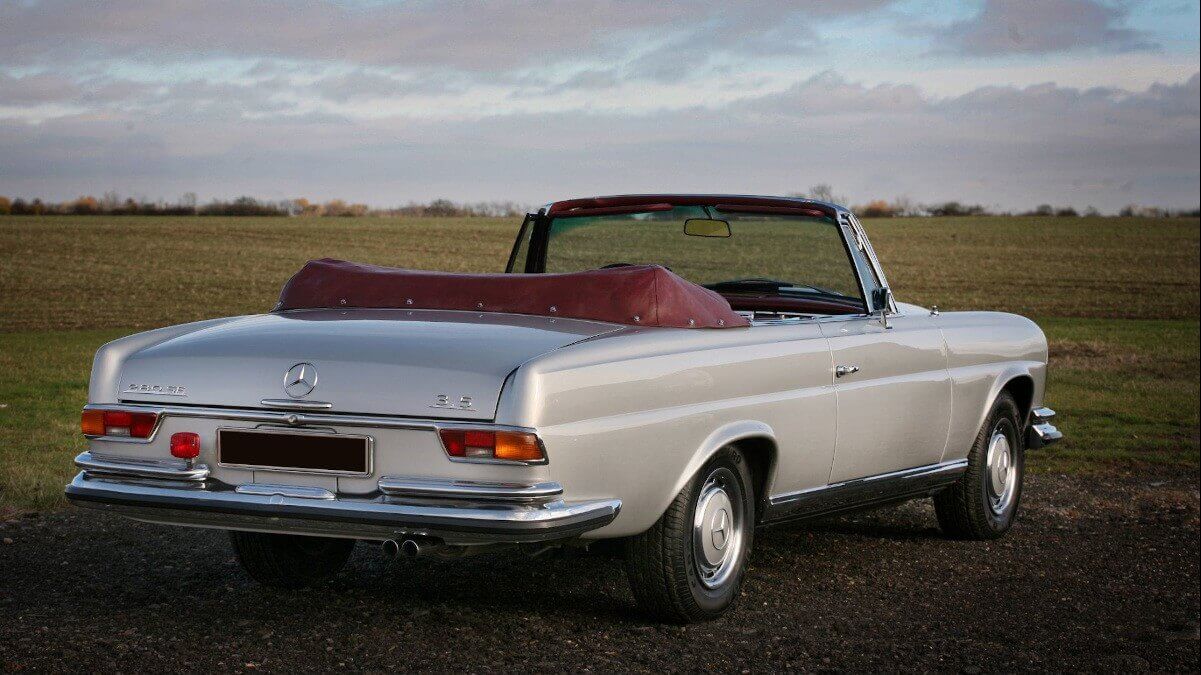 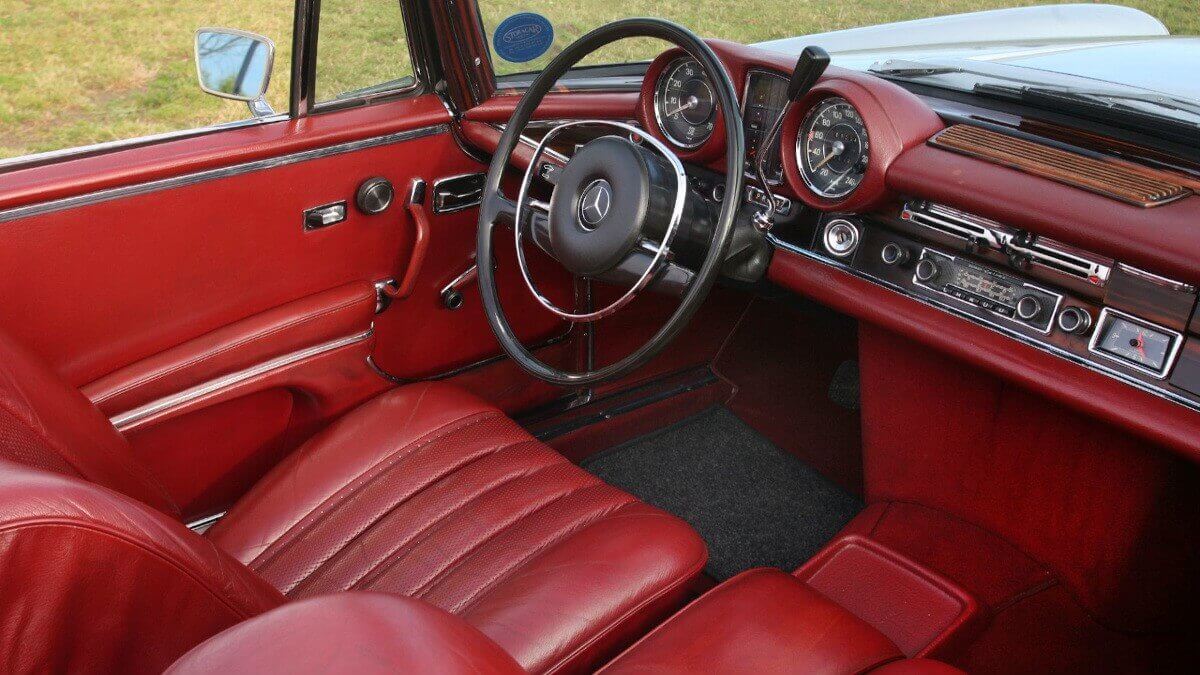 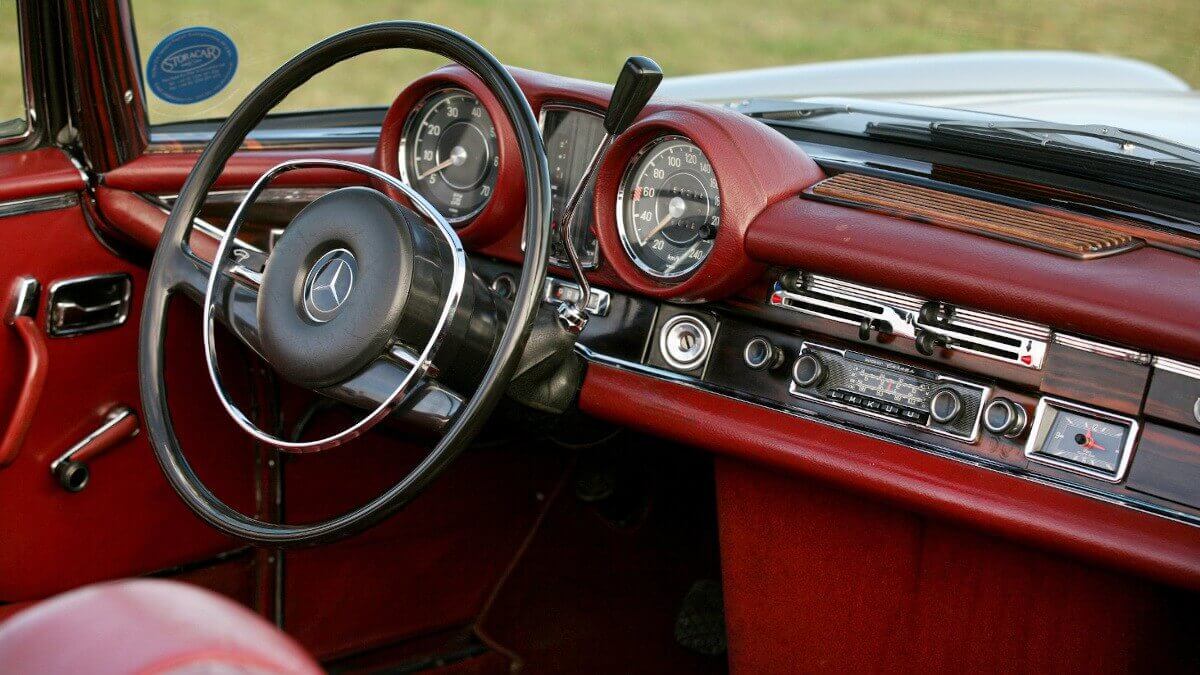 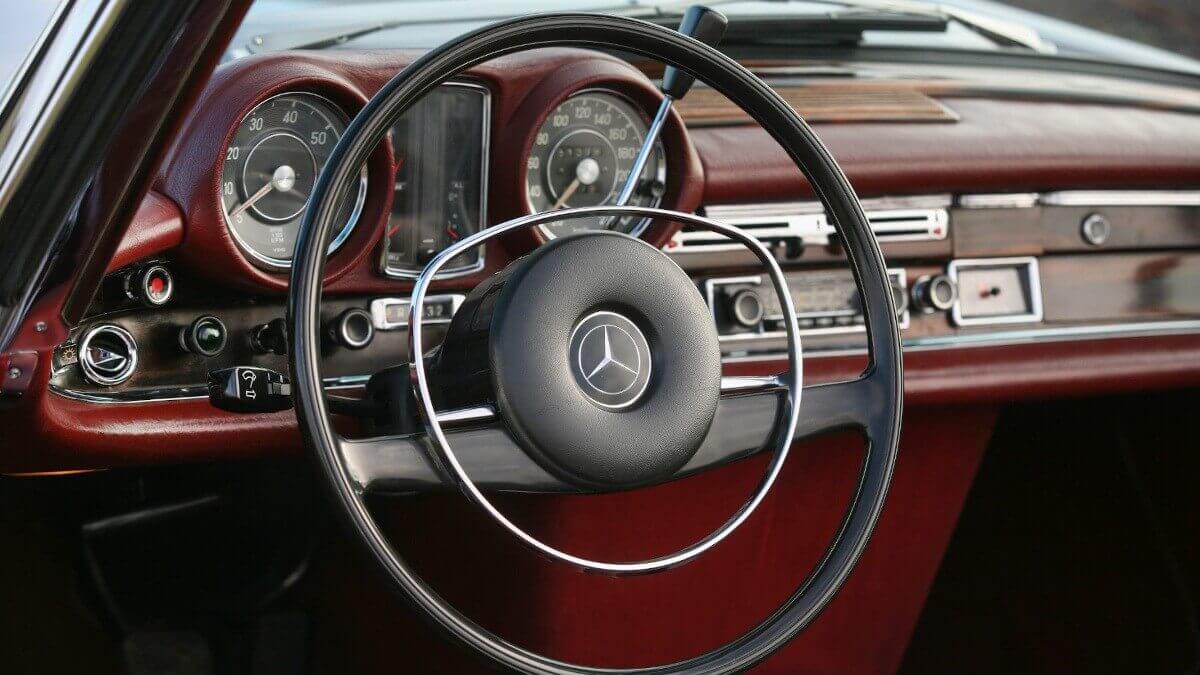 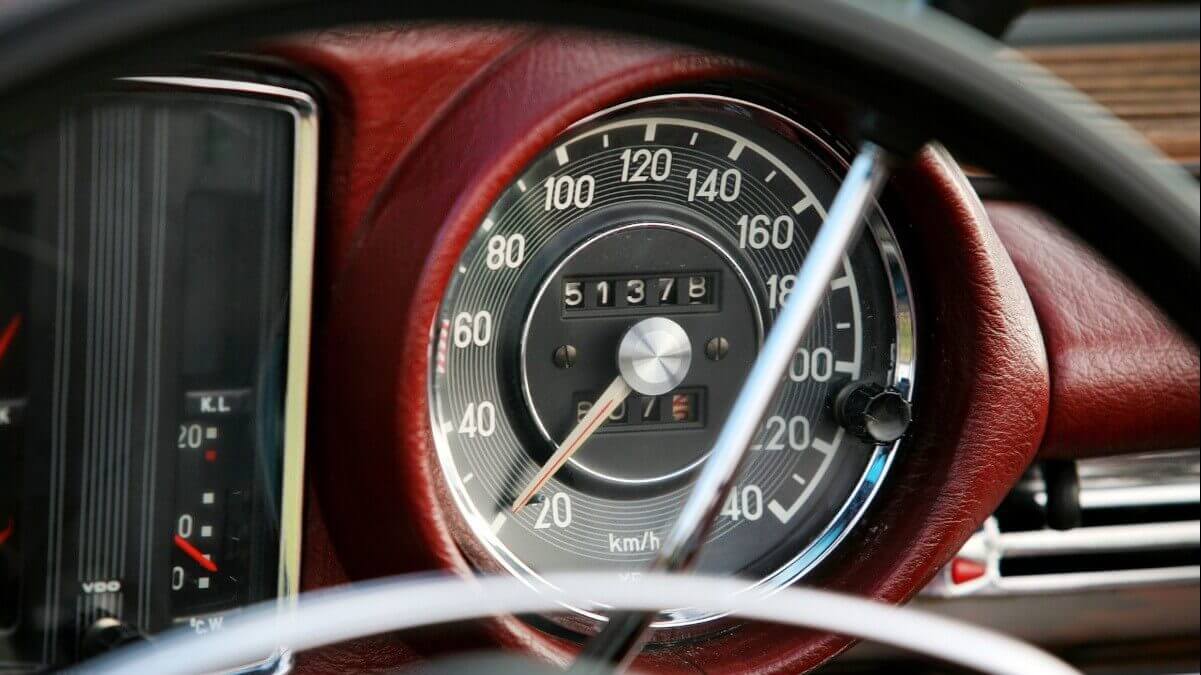 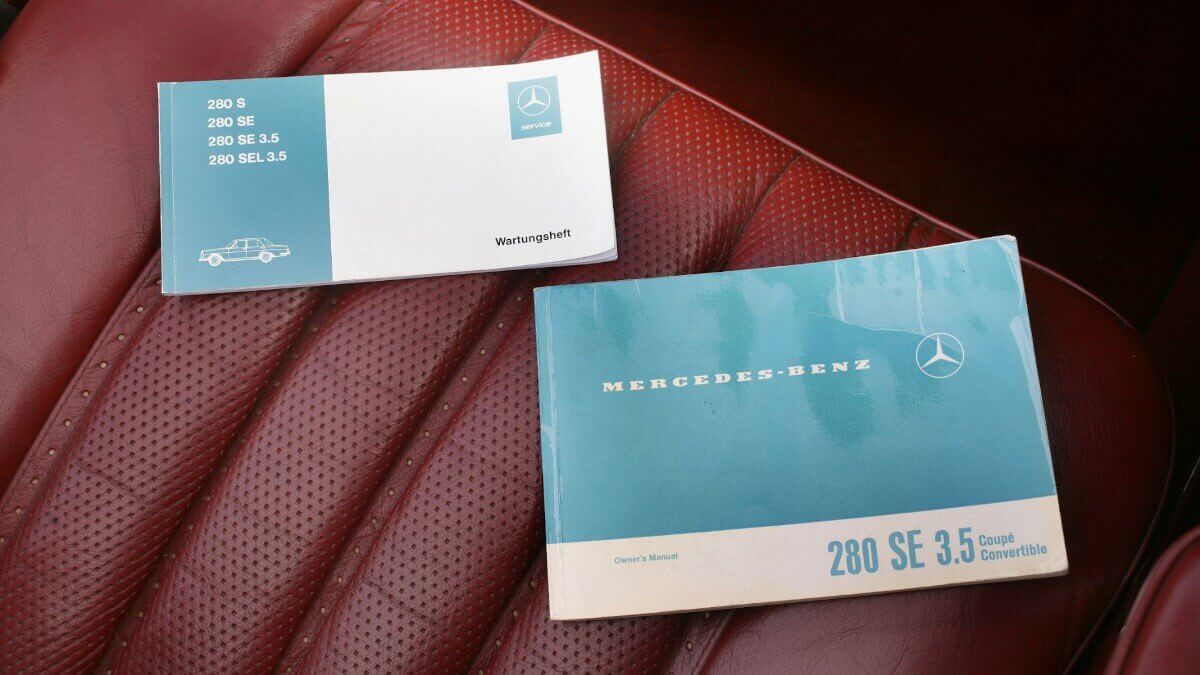 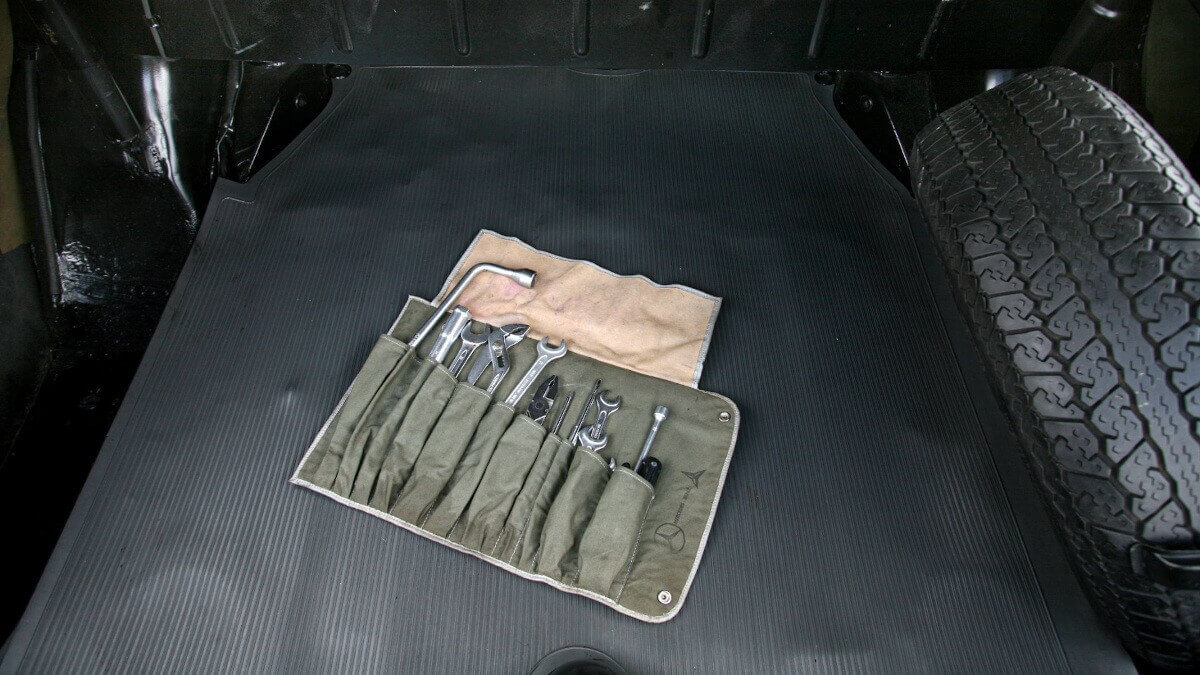 The Swiss classic car dealer Kidston SA currently has an excellently preserved example of a Mercedes-Benz 280 SE 3.5 Cabriolet built in 1970 on offer. It is a rare vehicle delivered in Europe without US sidemarkers and with one-piece headlights. The majority of the V8 offshoots of the W 111 as Coupé and Cabriolet had been developed for the American market. With a paint finish in the classic ‘silver grey’ (DB 180) and a leather interior in bordeaux including matching dashboard and carpets in combination with high-quality wood decor, this classic car can still inspire today. A Becker Europa radio and an automatically extending Hirschmann aerial are installed ex works. In the past few years, this car with its low mileage of just about 50,000 kilometers has spent some time in collections in Germany, Japan, southern France and Monaco. While leather and chrome parts are still original, the bodywork received an elaborate repainting, for which it was stripped down to the bare sheet metal. All manuals and the complete set of tools are still with the car. Anyone interested in buying this special vehicle can contact Kidston SA directly.