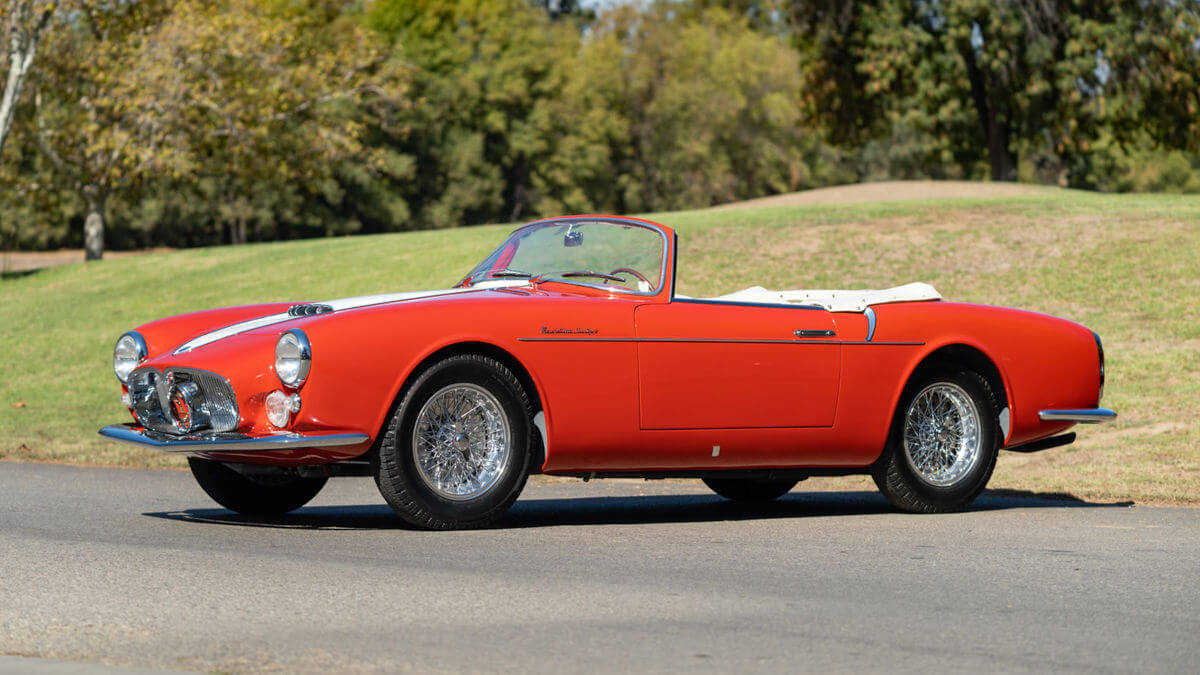 From 1954 Maserati offered the final edition of the A6G sports car. As with its predecessor, the sales designation 2000 GT was frequently used in brochures and advertisements. On the race tracks of the World Sports Car Championship, the corresponding offshoots were called A6GCS. By 1957, only 60 Maserati A6G/54 cars had been built, with the bodies being exclusively built by external coachbuilders such as Allemano, Zagato and Frua. Today the still existing cars achieve high prices at auctions.

Let’s take a brief look at the history of this sports car. Actually, the Maserati brothers had to only produce racing cars when they set up their company. After Alfieri Maserati, the creative head of the brand, died in 1932 as a result of a racing accident, Maserati no longer achieved the same momentum as before. In order to finance new developments, the remaining Maserati brothers Bindo and Ettore for the first time also sold roadworthy offshoots of their racing cars. In 1937, however, the financial situation was worse than ever, so they finally sold the entire company to the steel industrialist Adolfo Orsi. Until 1947 there were only a few individual one-offs with road approval for very special customers. Then Maserati deliberately presented the 1500 GT, internally called ‘A6’, as a sports car for road and racing. 59 of this type were built in total. For 1950 the engine capacity was increased to two liters and the chassis was improved to the 2000 GT ‘A6G’. However, due to unsatisfactory road performance and various strikes, only 16 units were produced by the end of 1953.

So the A6G/54 presented at the Paris Motor Show in October 1954 had to meet high expectations. On the one hand, its driving performance was to clearly exceed that of its direct predecessor. On the other hand, Maserati naturally also wanted to increase its production figures again. And last but not least, there was direct competition with Ferrari, an up-and-coming company that had been enticing customers by building sports cars in the immediate vicinity since 1947. Accordingly, the engineers under Gioacchino Colombo began to thorougly rework the two-liter inline six-cylinder engine. Compared to the A6G, the ratio of bore to stroke was changed, turning a long stroke engine into a short stroke engine with two overhead camshafts. Compared to the A6GCS, Maserati used a chain instead of sprockets to drive the camshafts in the A6G/54 to improve reliability in everyday use. These measures increased the revs and thus the power output, which in this case was around 50 percent higher than that of the predecessor. Expressed in figures, 110 kW/150 hp was initially available, later even 118 kW/160 hp thanks to dual ignition. 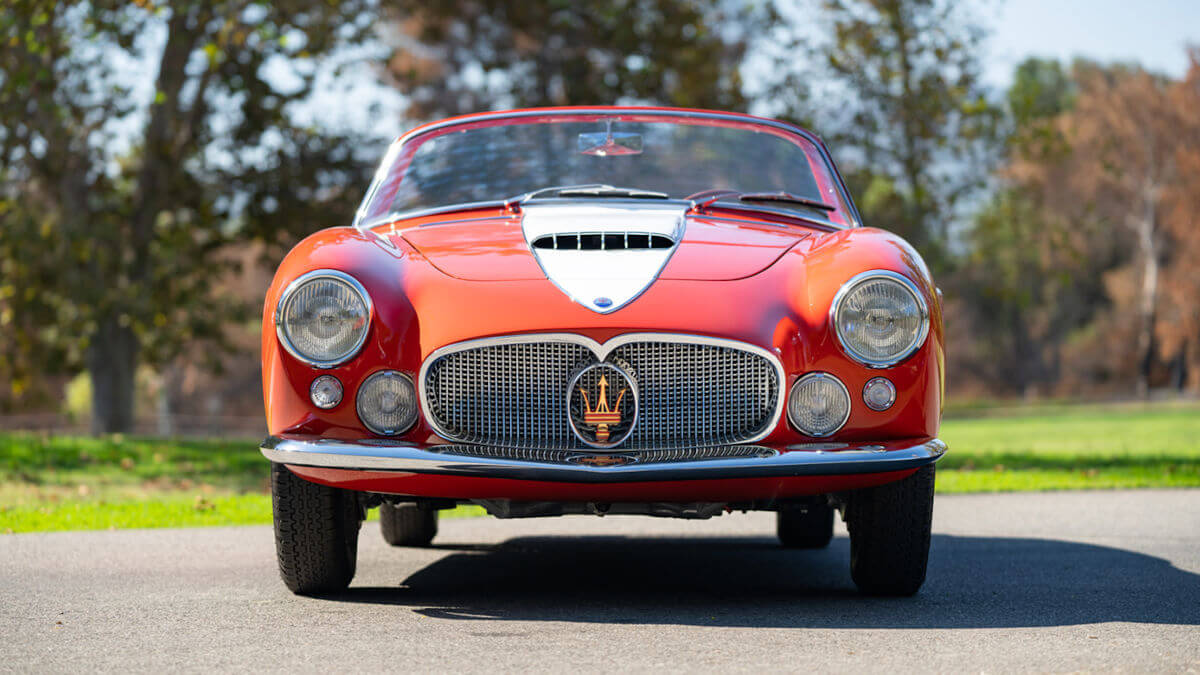 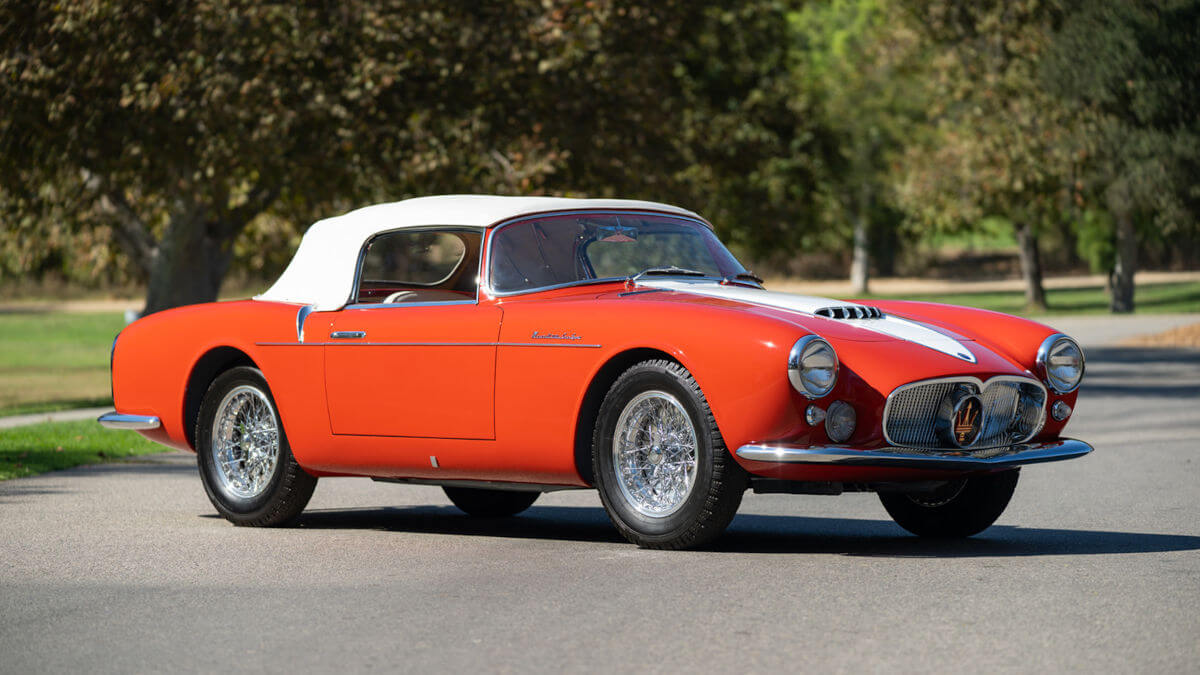 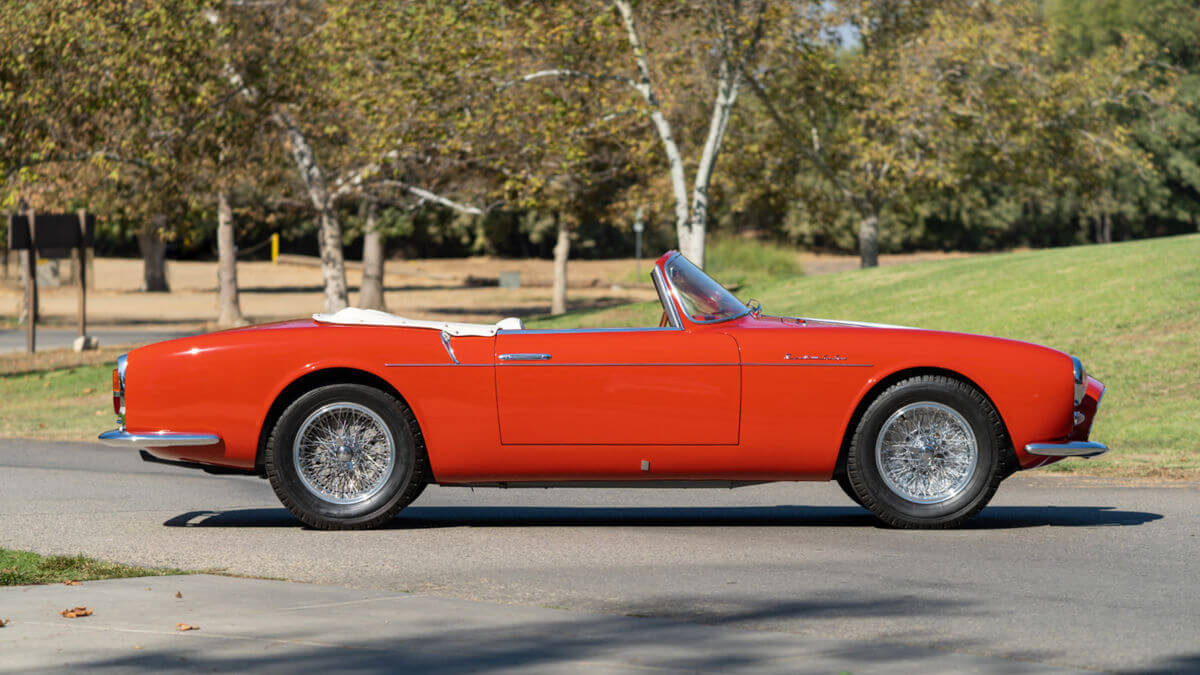 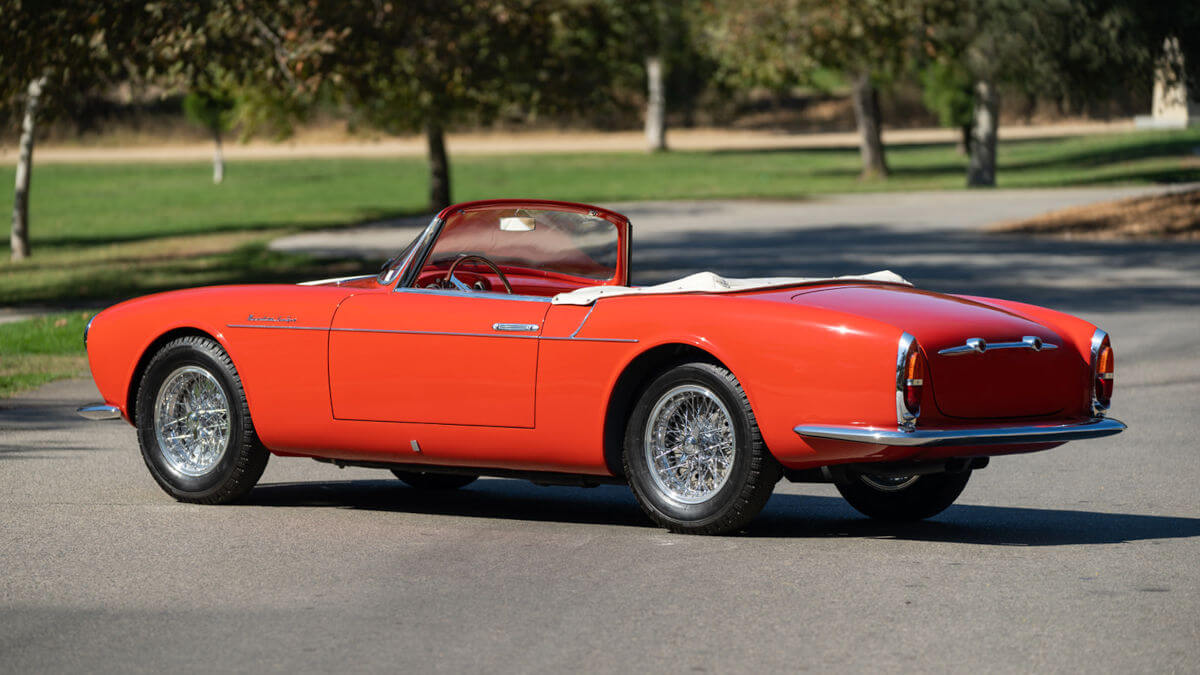 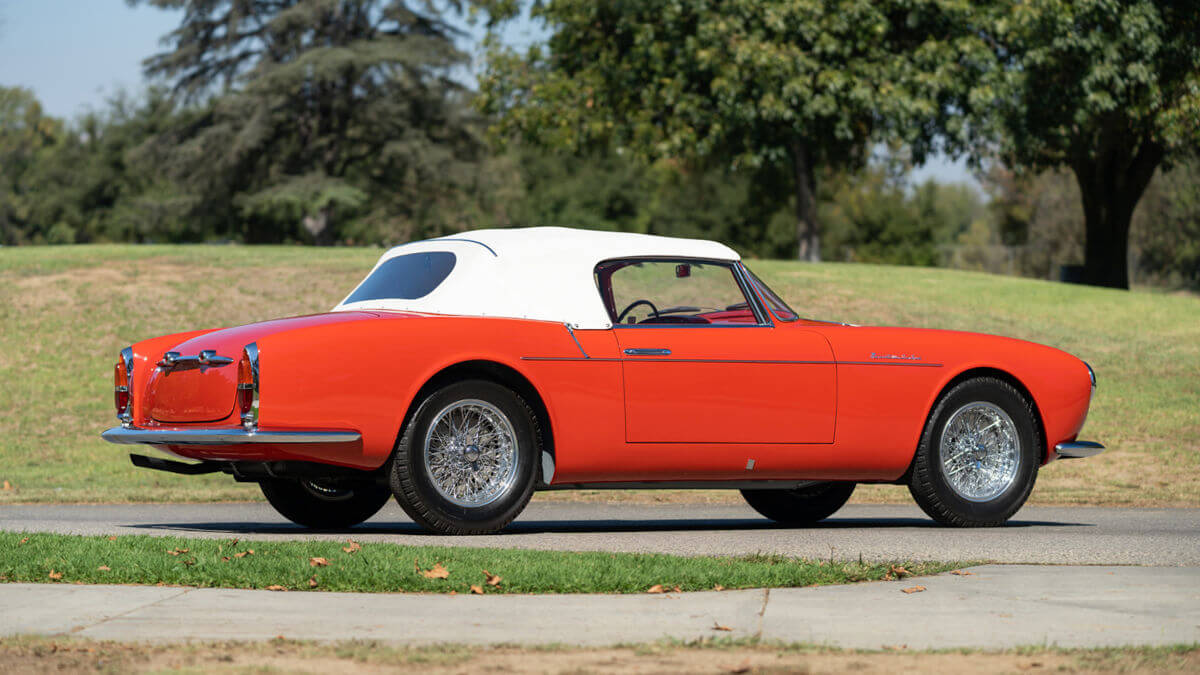 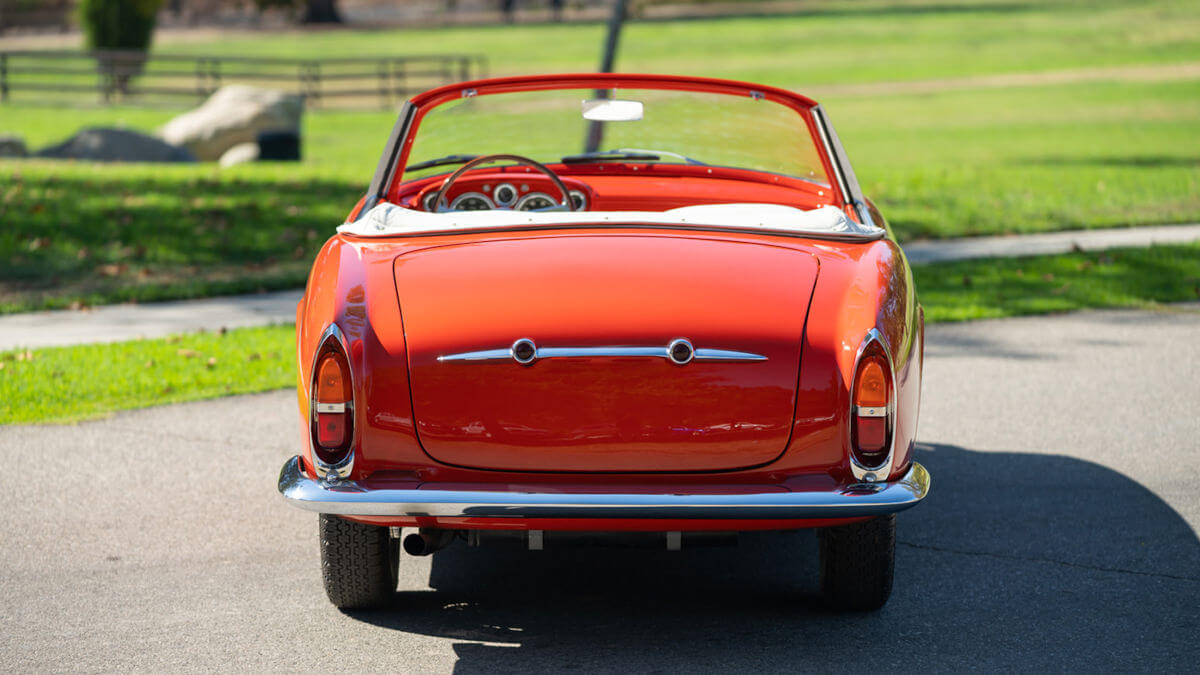 As already mentioned at the beginning, Maserati at that time only produced the engines, transmissions and the tubular frame made of steel tubes including suspensions for the A6G/54. Then they sent the components to the coachbuilder selected by the individual customer. The official brochures offered a choice of four bodies. Tipo A and Tipo B came from Frua, Tipo C from Allemano and Tipo D from Zagato. Pinin Farina had previously fitted various A6 and A6G chassis, but then fell out of favour with Maserati when they entered into close cooperation with Ferrari. Only for the A6GCS, a few bodies were still being built there at the request of Maserati dealer Mimmo Dei.

This dealer was also the one who started the ball rolling for the A6G/54 Frua Spider. After a Spider based on a A6GCS chassis with the engine of the A6G/54 was completed in Pietro Frua’s workshop in the spring of 1955, Mimmo Dei ordered a small series of ten vehicles. However, only the first one was given the same design as the original model. The other nine were given an extended front and other modifications in detail. Different bumpers and small fake air intakes on the rear fenders for example. As part of the ‘Geared Online’ auction, Gooding & Co. is offering the first of these nine Frua Spiders with chassis number 2180 from October 26 to 30. This car was built between May and August 1956. It was the only one to receive an aluminium dashboard painted in body color. 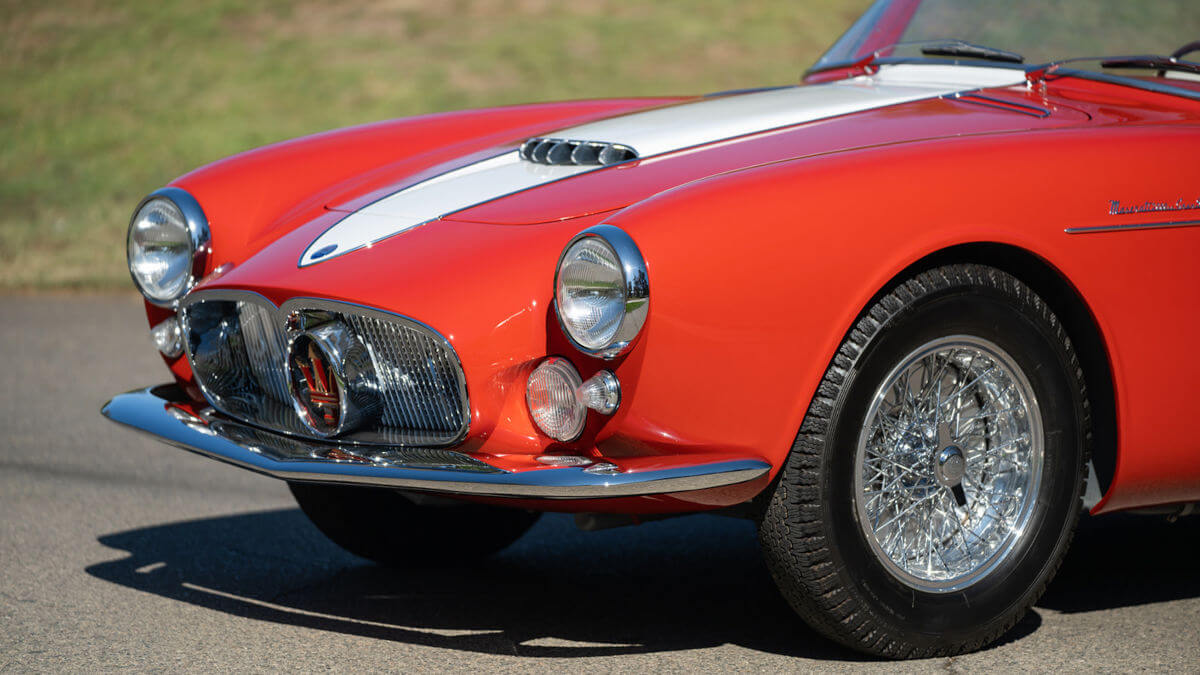 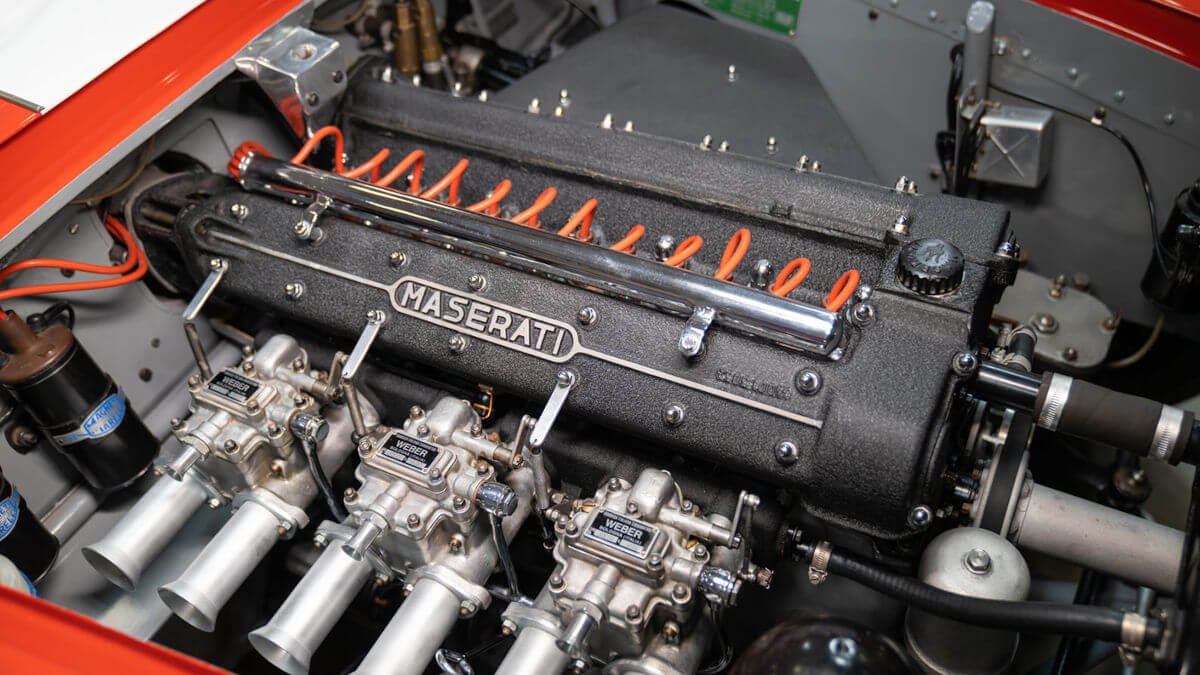 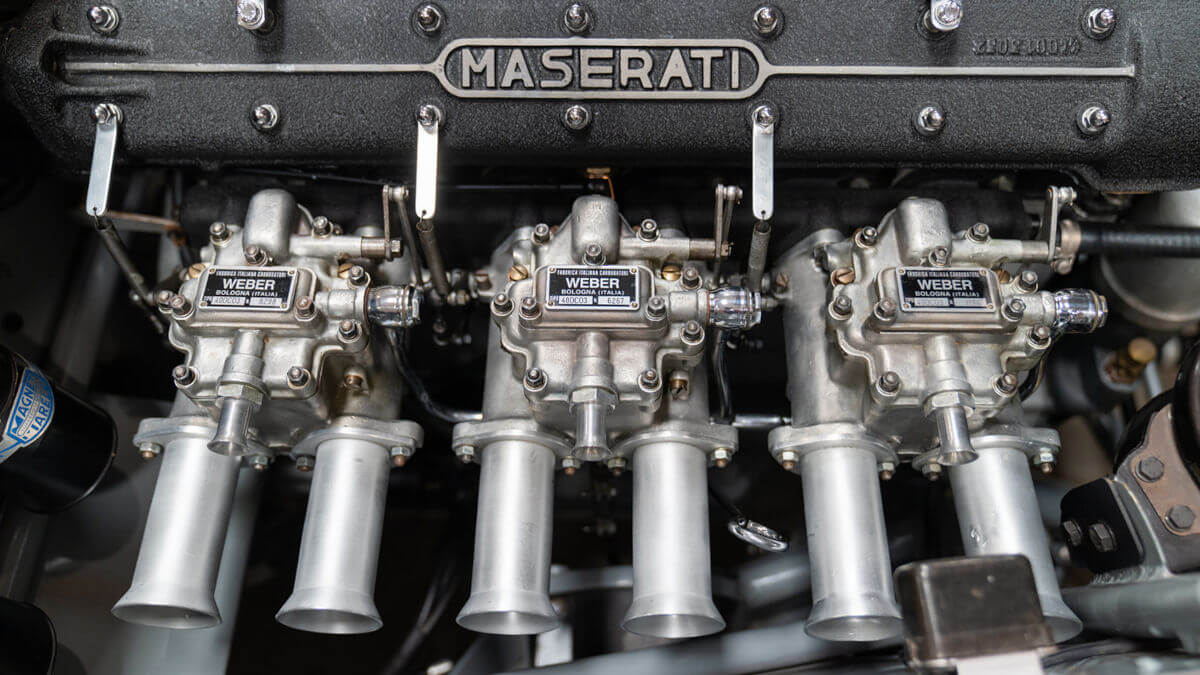 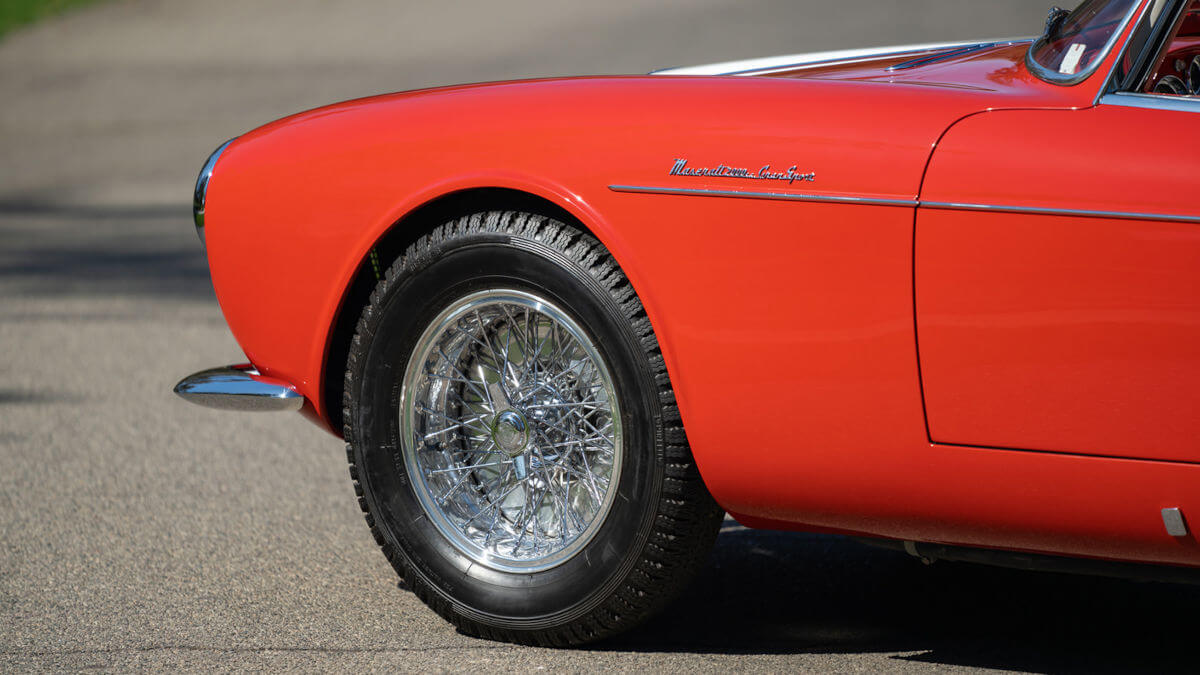 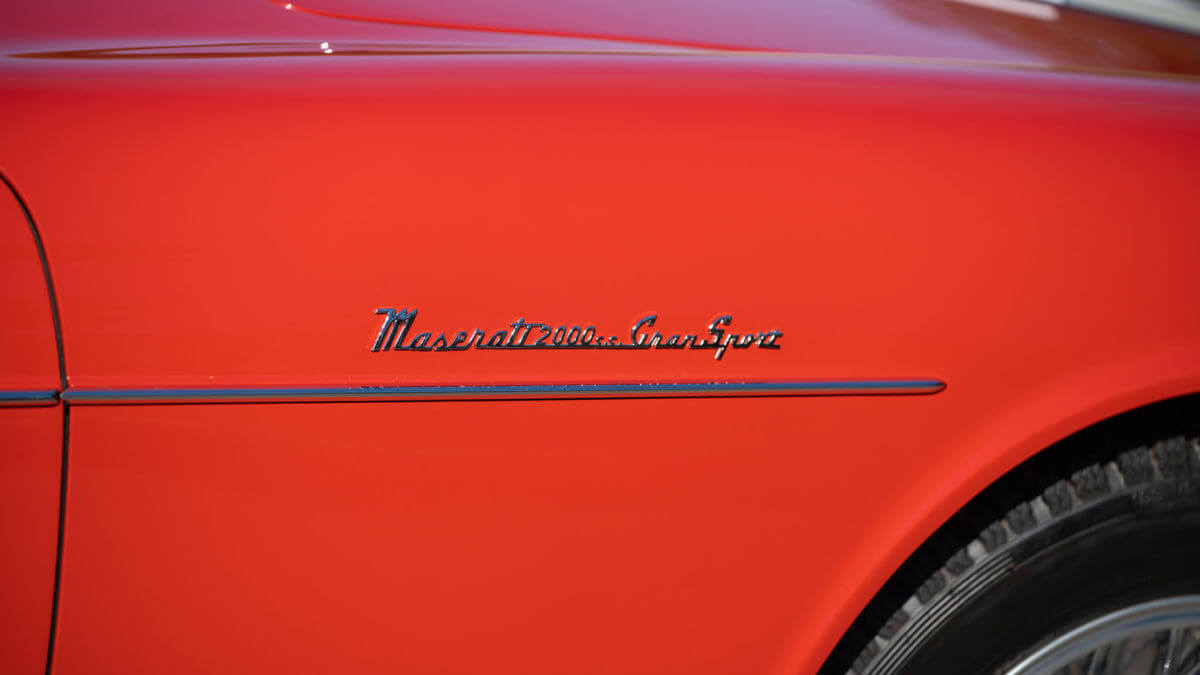 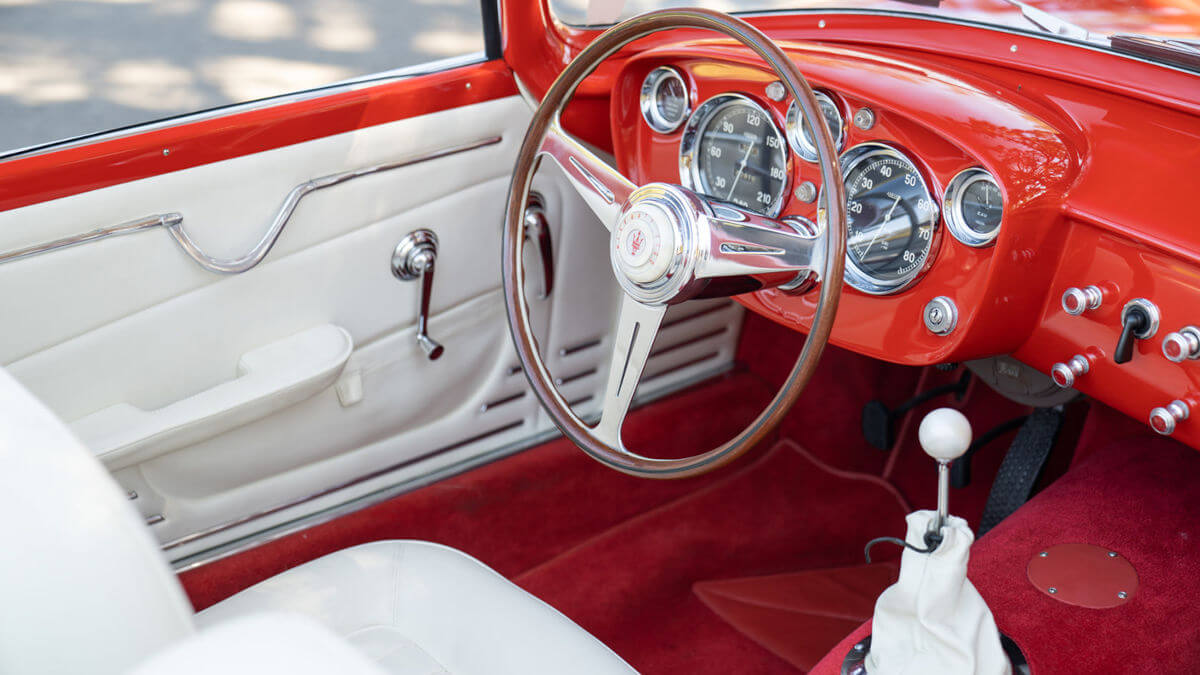 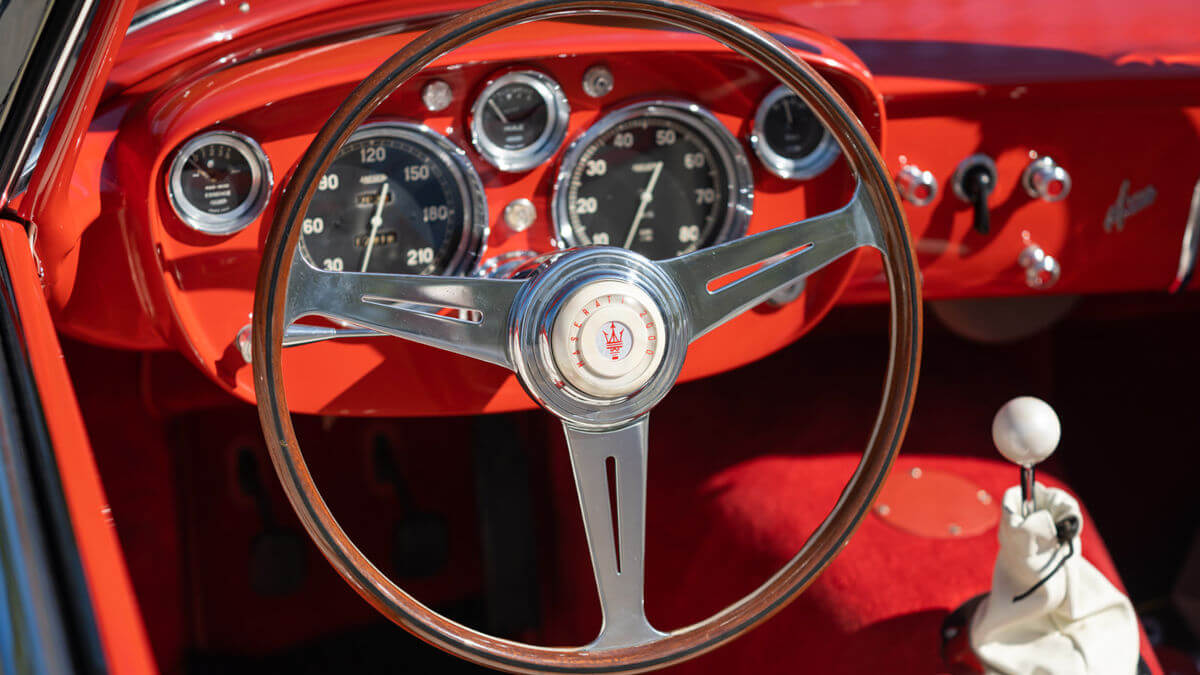 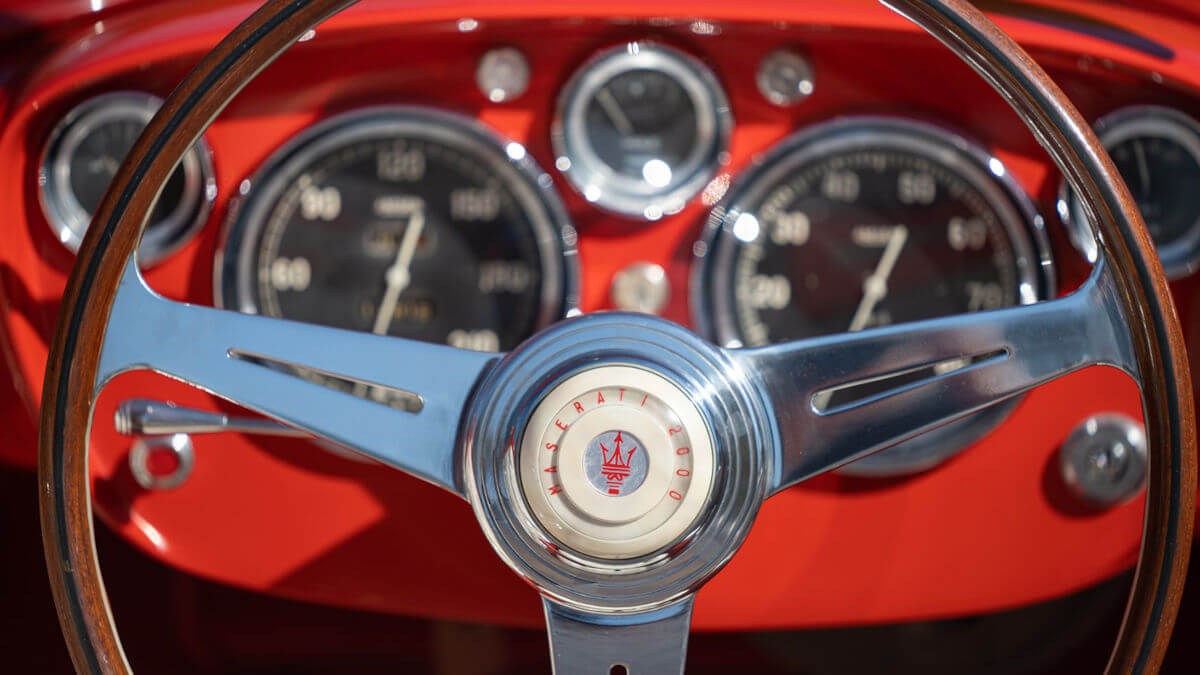 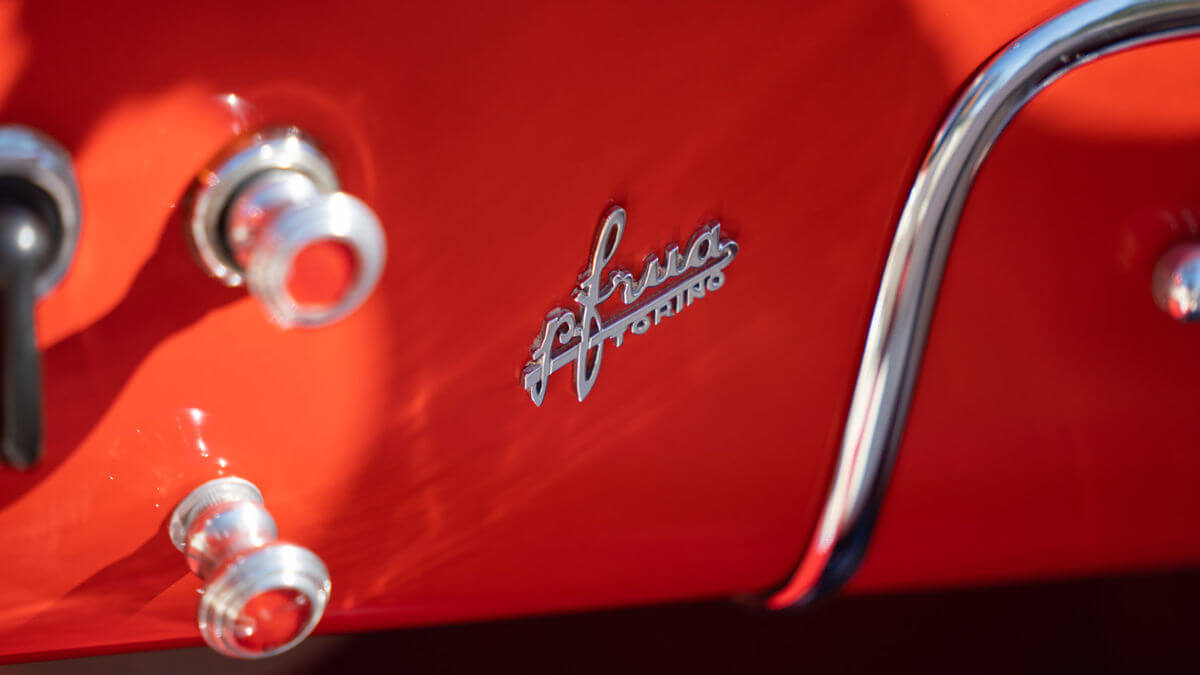 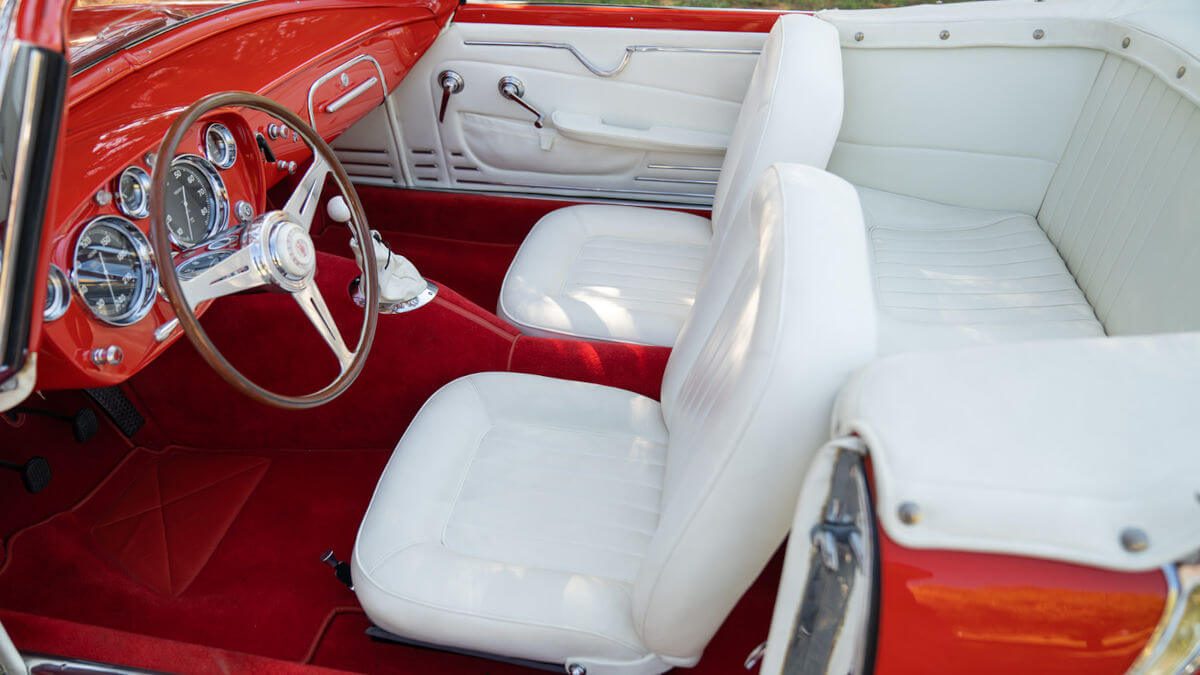 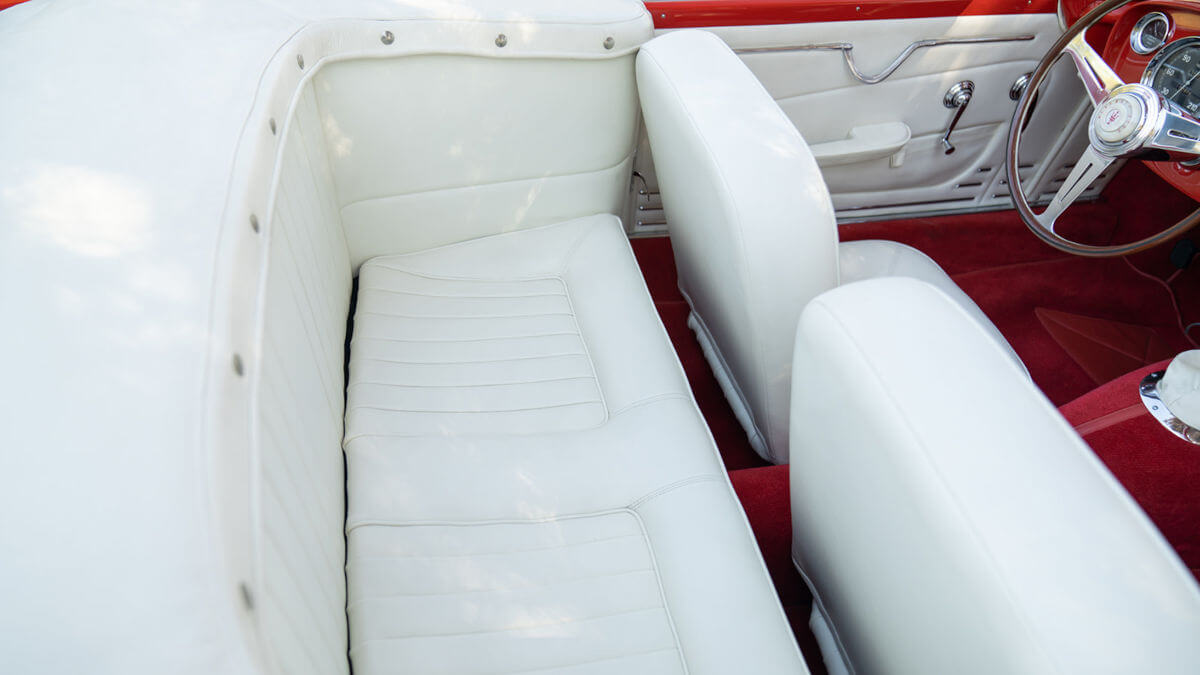 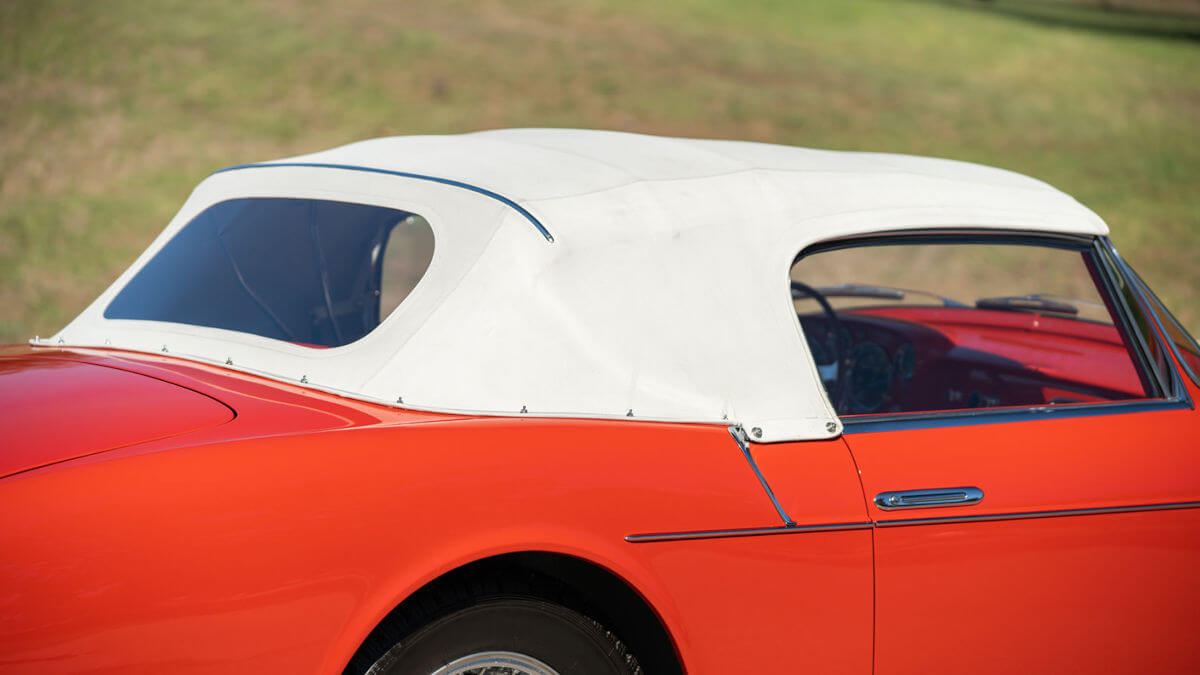 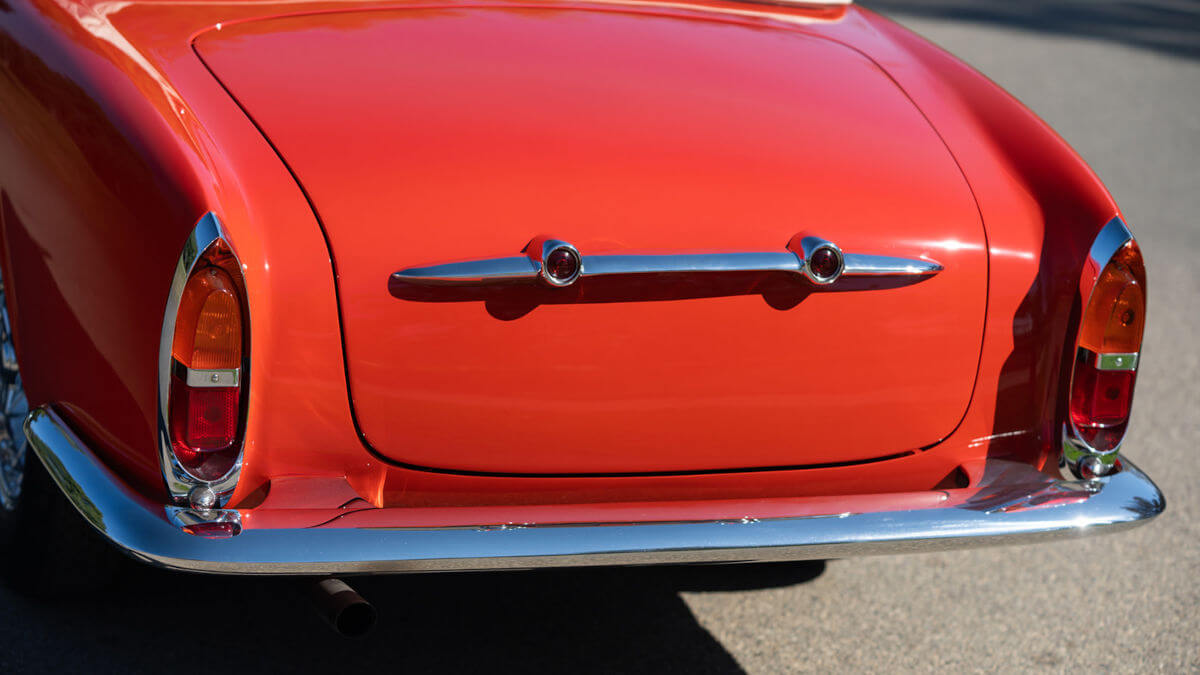 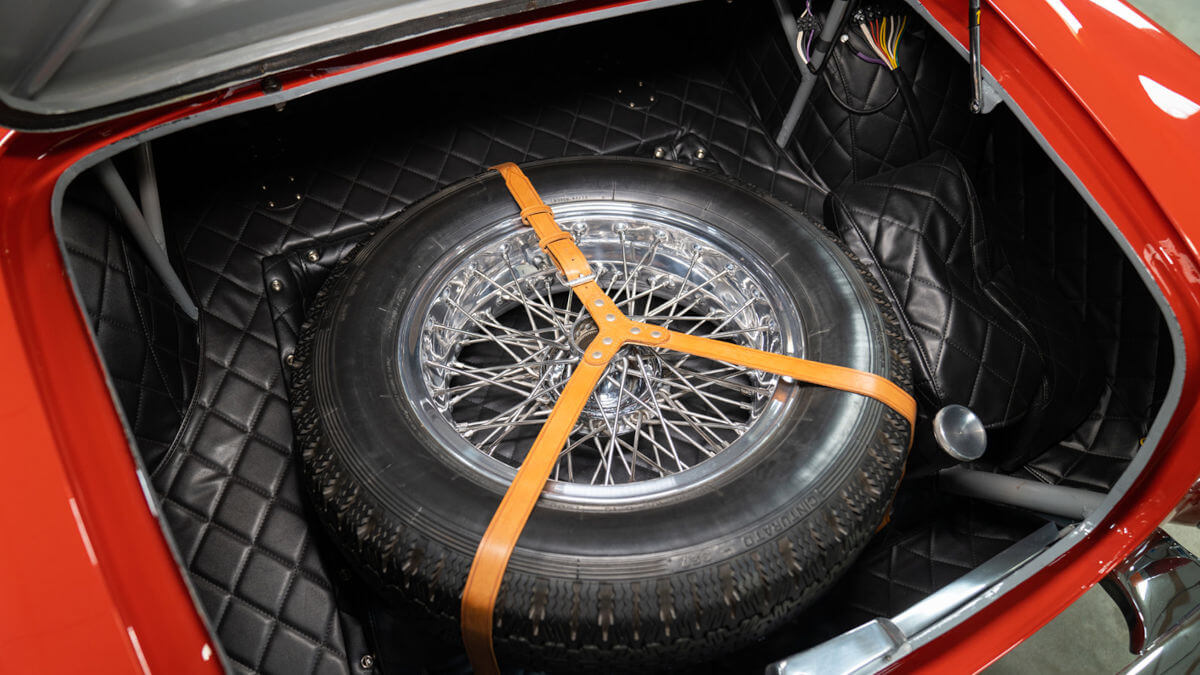 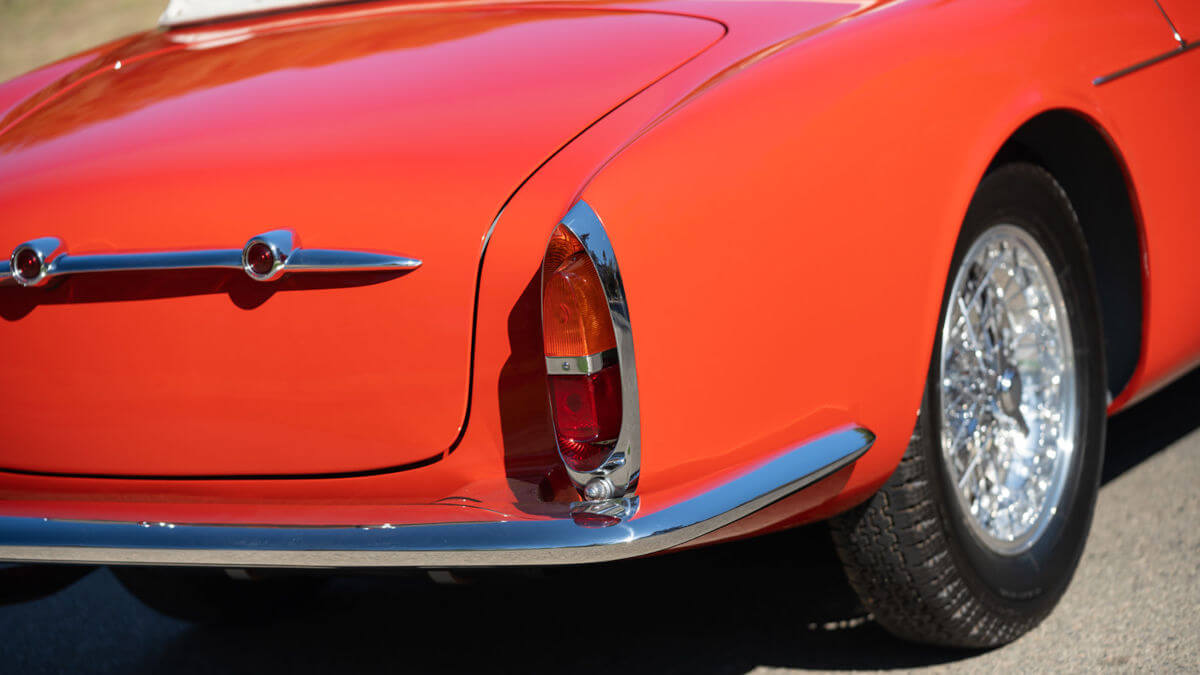 The two-tone car, painted in red with a wide white stripe, was used for a few photos that appeared in the car magazines Quattroruote and Motor Trend. In October 1956 the Parisian dealer Simone & Thépenier handed over this A6G/54 to its first owner, a Mr. Cavet from Venezuela. Until the car reappeared in the USA in the mid 1970s, not much is known about its whereabouts in the early years. In 1978 Louis Rader bought the car from Thomas Dailey in California. At that time the original drivetrain was missing and the car had been repainted dark blue. Under the hood a Ford 289 V8 was working. Mr. Rader painted the Maserati red, but otherwise left it in the condition it was bought and sold it to Dana Beall and Mick Brackett around 1990.

The pair also didn’t change anything and sold the A6/54 Frua Spider to the current owner in 1999. He set about finding a correct engine and gearbox and sent these parts together with the car to Carrozzeria AutoSport in Modena, where under the supervision of Dr. Adolfo Orsi jnr an extensive restoration to the delivery condition of 1956 took place. Interni Auto in Mantova took care of the interior and Modena Motori of all the work on the drivetrain. After completion, the Maserati received new FIVA papers in 2008. It immediately won its class at the Concorso d’Eleganza at Villa d’Este. This was followed by another success at the Classy Chassis Concours d’Elegance in Houston and a presentation at the Museo Enzo Ferrari in Modena to honour Maserati’s 100th anniversary. Carrozzeria AutoSport then disassembled the car once again. They inserted additional bracing into the frame to correct an old mistake in Frua’s design. Since then, the car shows only slight signs of use and is now looking for a new owner. Gooding & Company expects a hammer price in the range of US$ 2,000,000 to US$ 2,750,000.