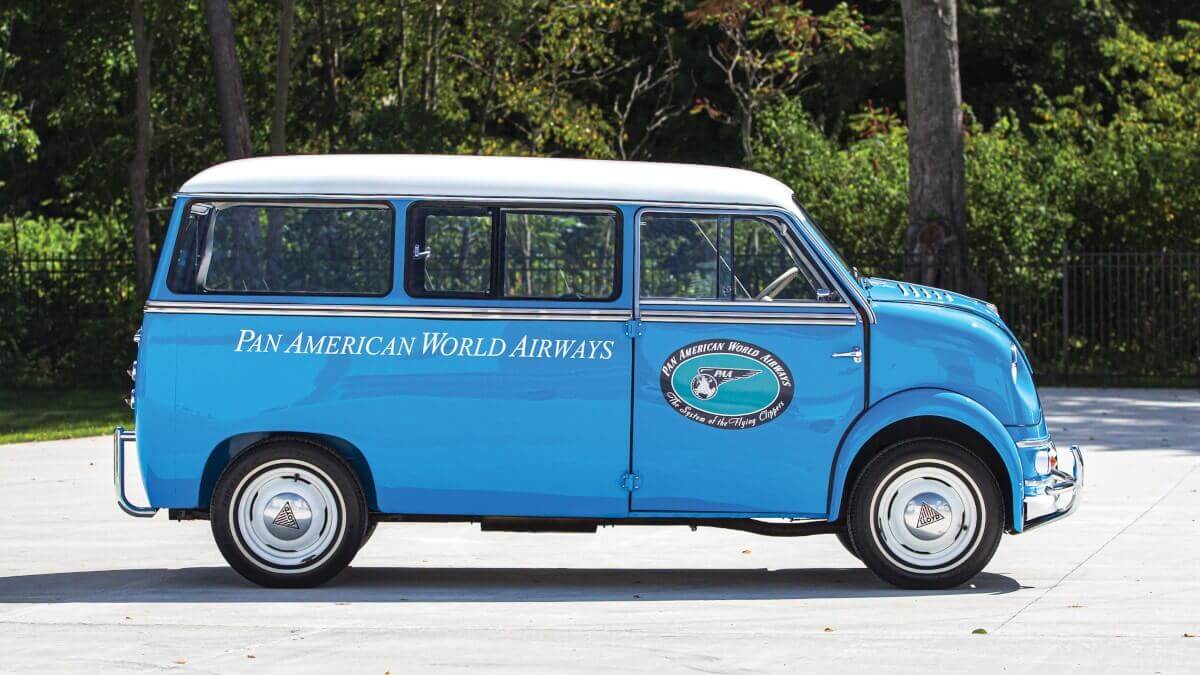 “Wer den Tod nicht scheut fährt Lloyd” (“He who doesn’t fear death drives Lloyd”), was a German saying for many years. Today hardly anyone knows this brand and its origins. The company name goes back to the shipping company Norddeutscher Lloyd from Bremen, which from around 1901 also produced electric motors for railways in addition to shipbuilding. The responsible departmen for this was spun off in 1906, when the construction of electric cars was also added to the portfolio, and was given the name NAMAG (Norddeutsche Automobil- und Motoren AG), with some vehicles also displaying the name Lloyd on the radiator grille. Eight years later NAMAG merged with Hansa-Automobil GmbH from the nearby village of Varel to form the Hansa-Lloyd AG in Bremen. In addition to a luxury car that was far too expensive, the company’s portfolio initially consisted only of trucks and tractors. With this offer the company couldn’t survive for long, so in the middle of 1929 the majority of shares went to Wilhelm Tecklenborg and Carl Borgward, who had earned a lot of money with their commercial vehicle company Goliath and mainly three-wheeled vehicles. Due to the world economic crisis, which spread as a result of the stock market crash in New York in October 1929, the merger of the companies was delayed until 1931, when finally the ‘Hansa-Lloyd und Goliath Werke Borgward & Tecklenborg oHG’ was founded.

The brand name Lloyd disappeared from the market until 1950. In 1949, the Lloyd Maschinenfabrik G.m.b.H. in Bremen was re-established by Carl Borgward, his wife Elisabeth and the engineer Wilhelm Lathwesen. Initially, replica looms and electric utility vehicles were built for the British army. One year later, however, the new small car Lloyd LP 300 rolled out of the halls. Due to the prevailing scarcity of materials, it was built with a plywood body covered in artificial leather, which led to the nickname ‘Leukoplastbomber’ and the saying that was used at the beginning of this text. After the company was renamed Lloyd Motoren Werke G.m.b.H. in 1951, it moved to a new, larger plant within Bremen, which was steadily expanded until 1960. The successor model to the LP 300, the Lloyd 400, appeared in 1953 with a more pleasing appearance, but was still built from plywood until October 1954, when the company finally changed to steel. Parallel to the small cars, the LT commercial vehicle was produced from 1952, first as the LT 500, later also as the LT 600. In addition to a panel van, customers could choose a six-seater minibus as well as a high and a low platform version. This was optionally followed in November 1956 by vehicles with a wheelbase extended from 2,350 to 2,850 millimeters. 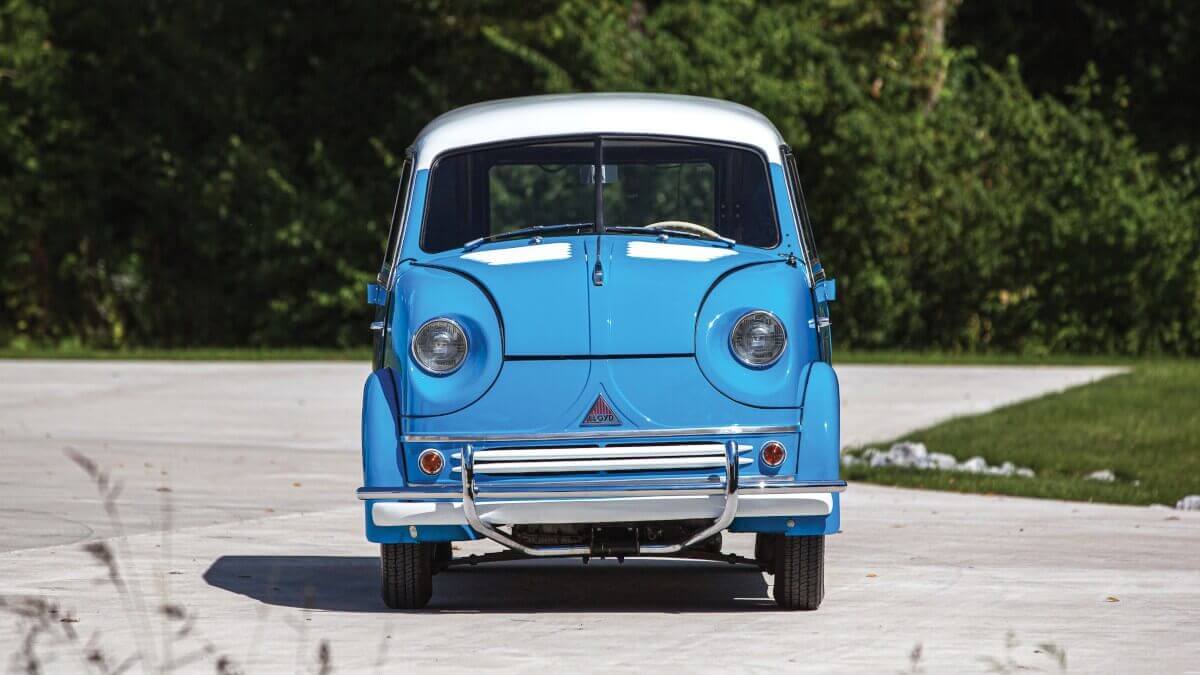 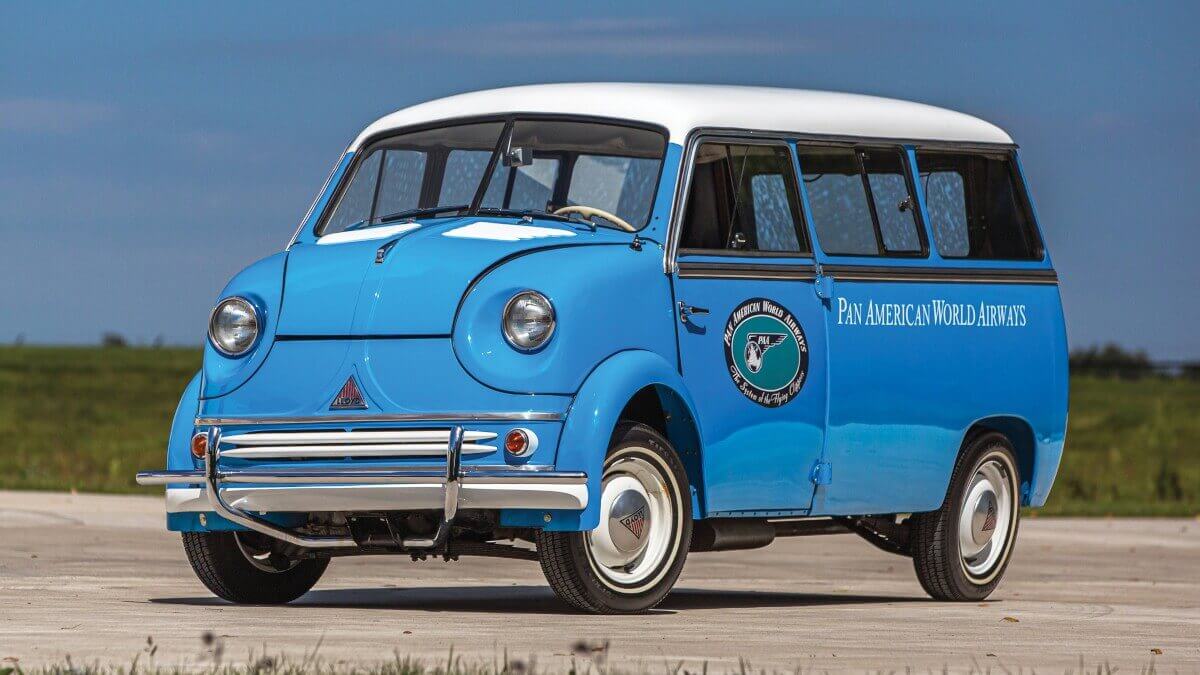 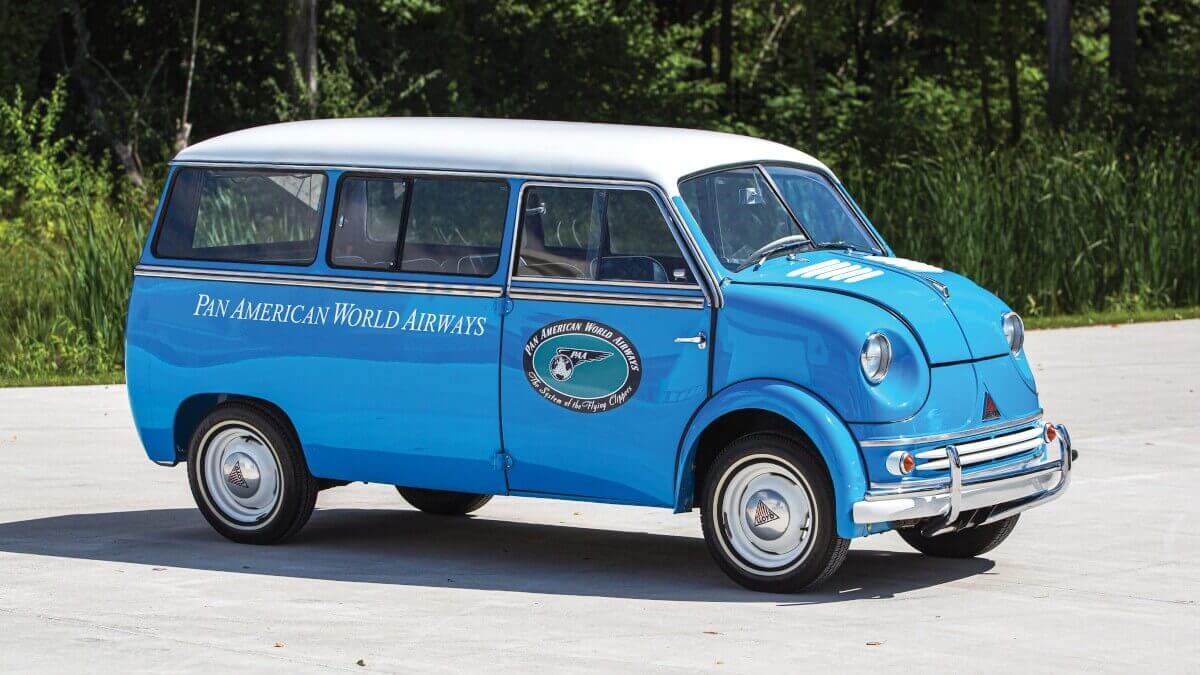 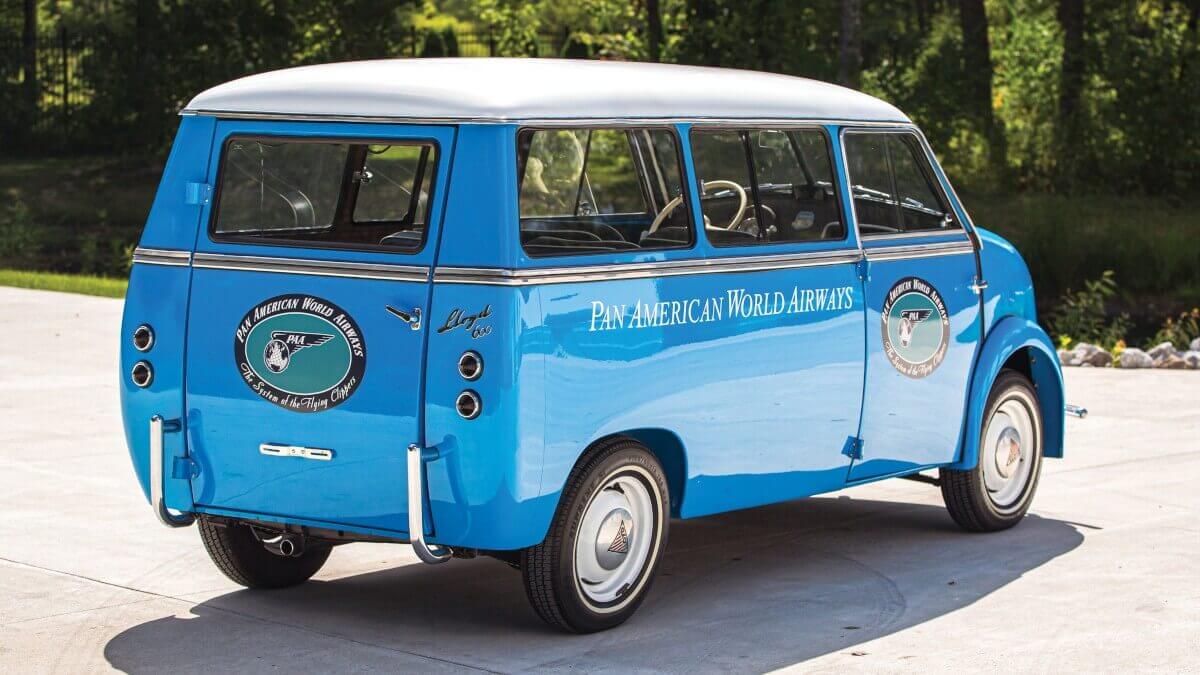 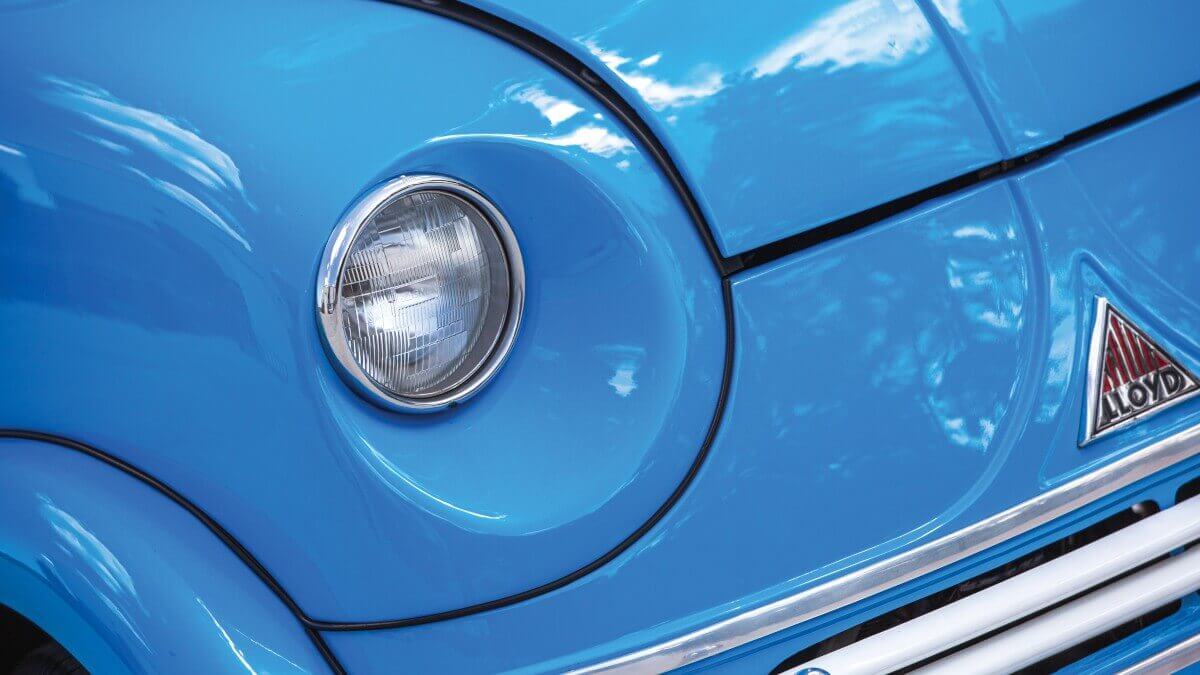 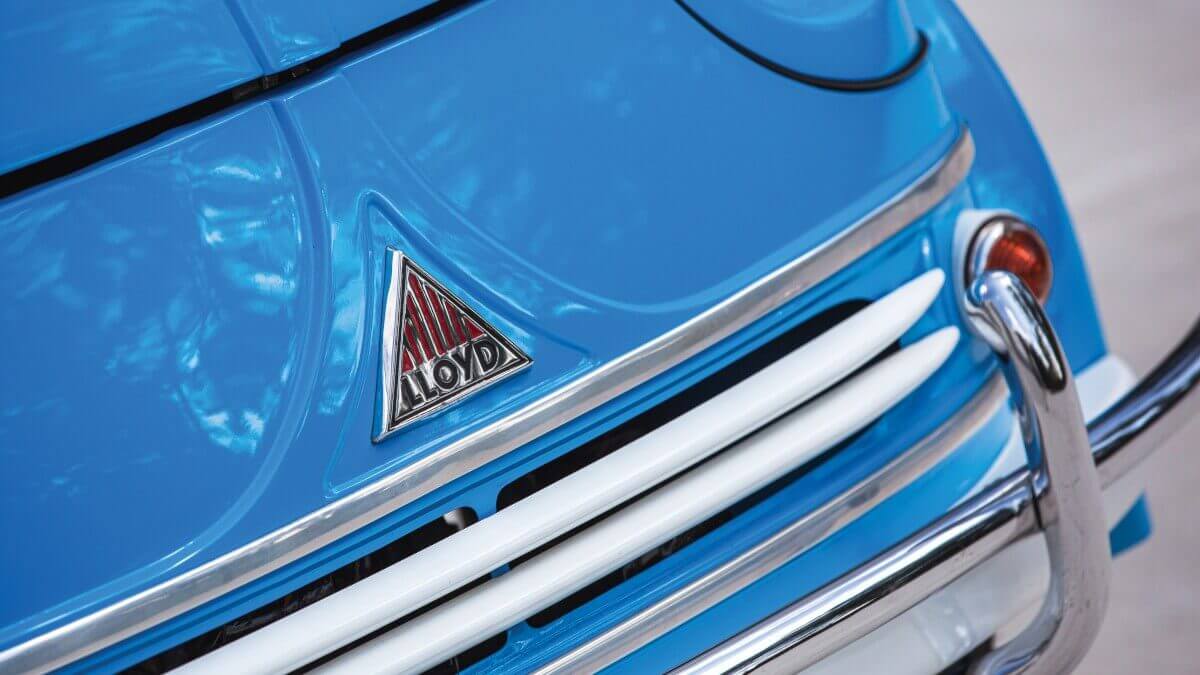 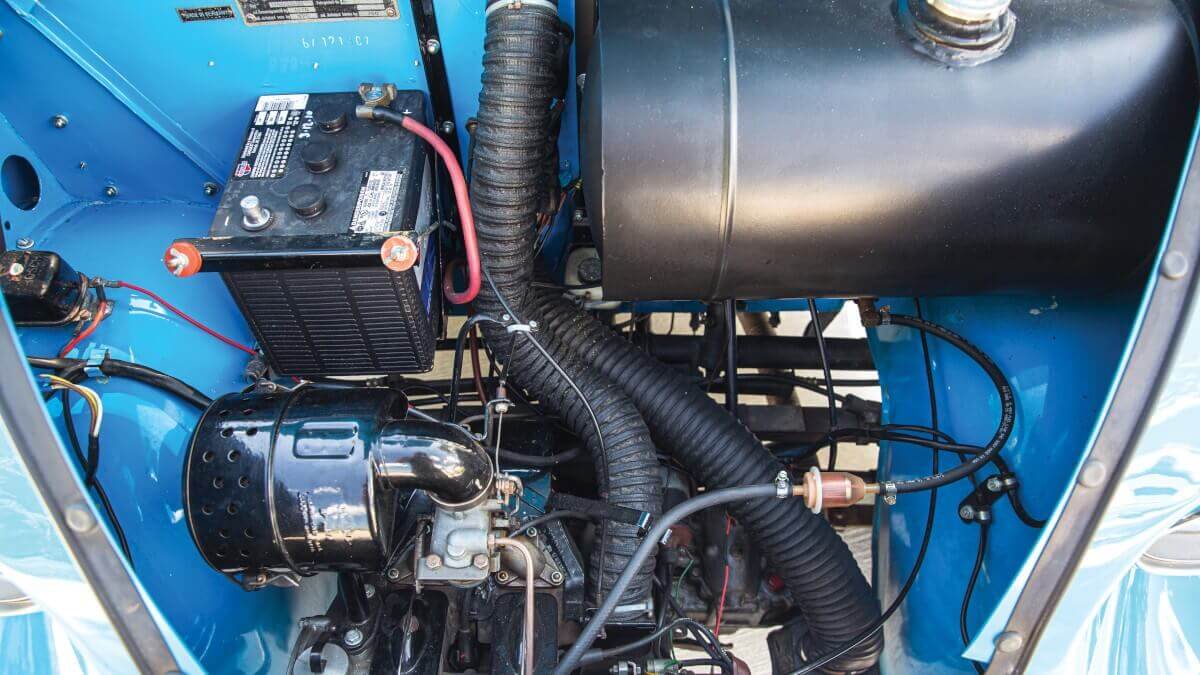 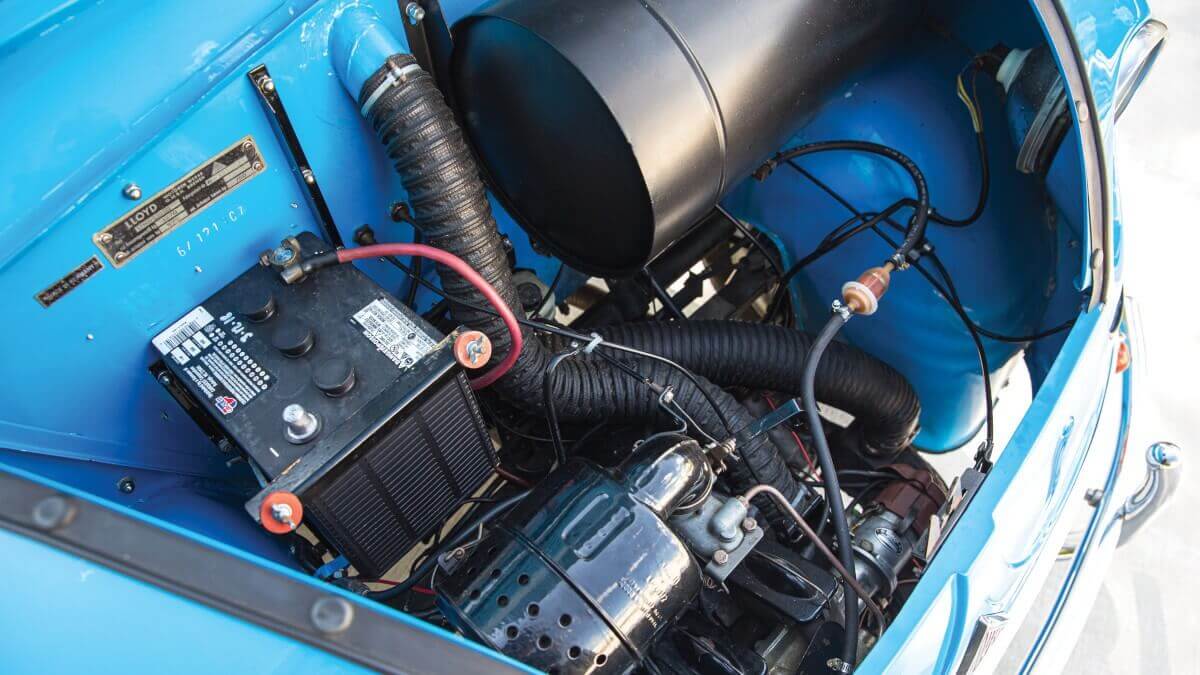 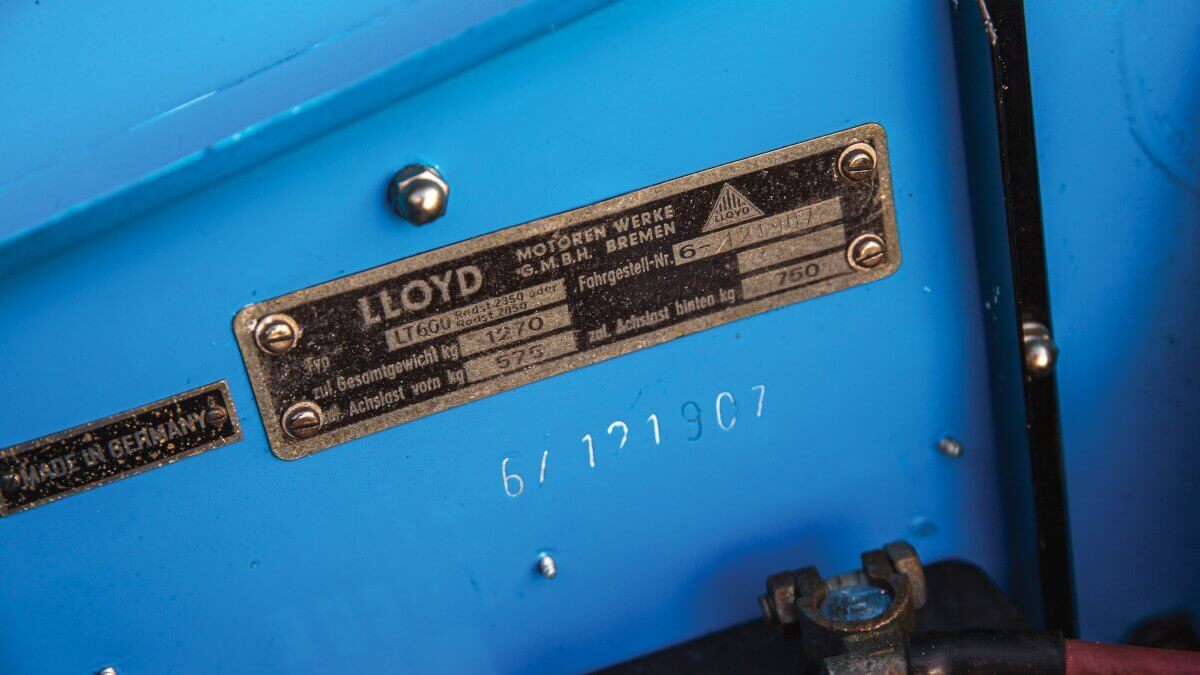 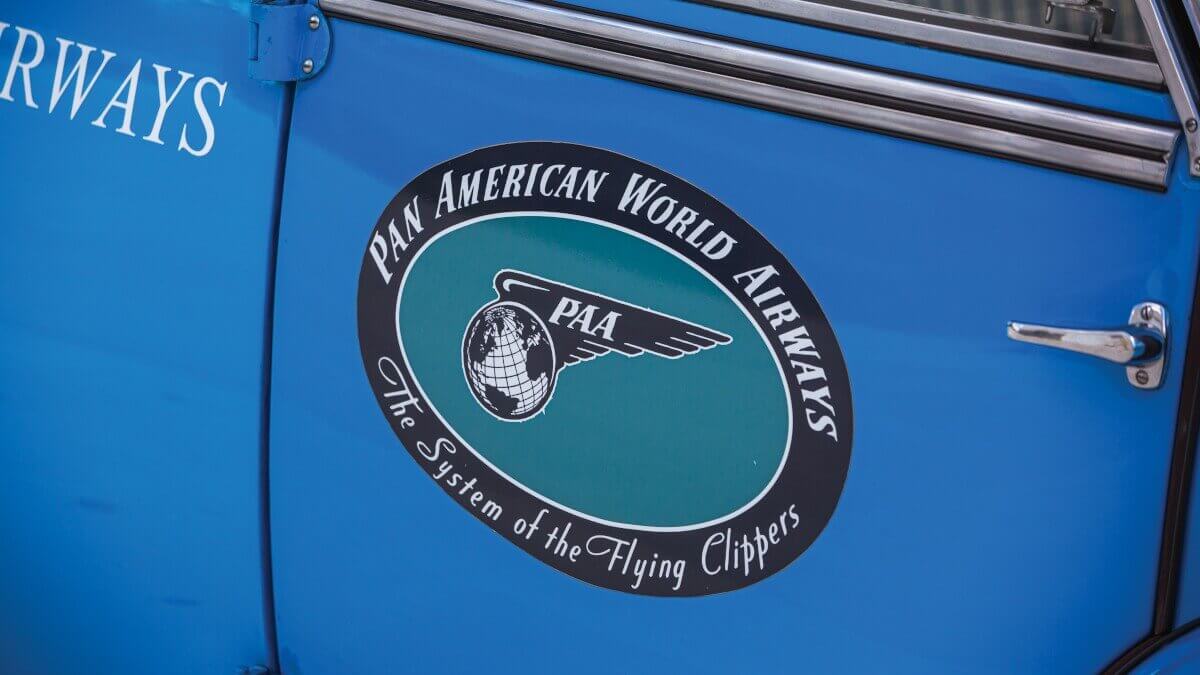 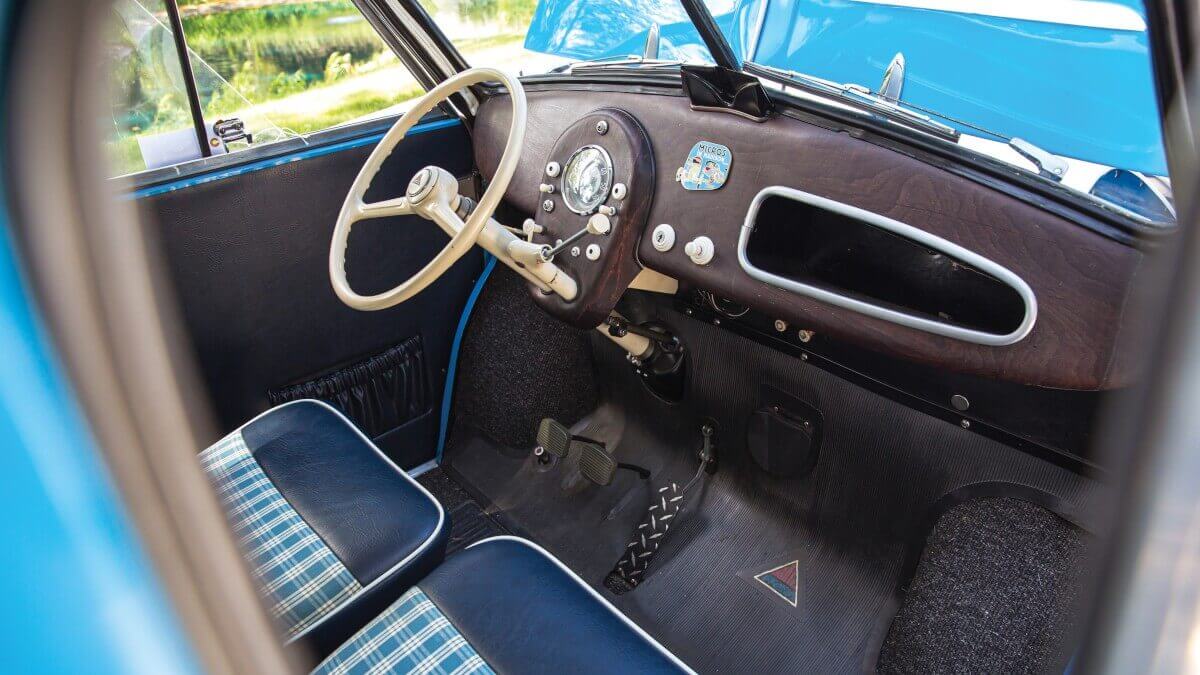 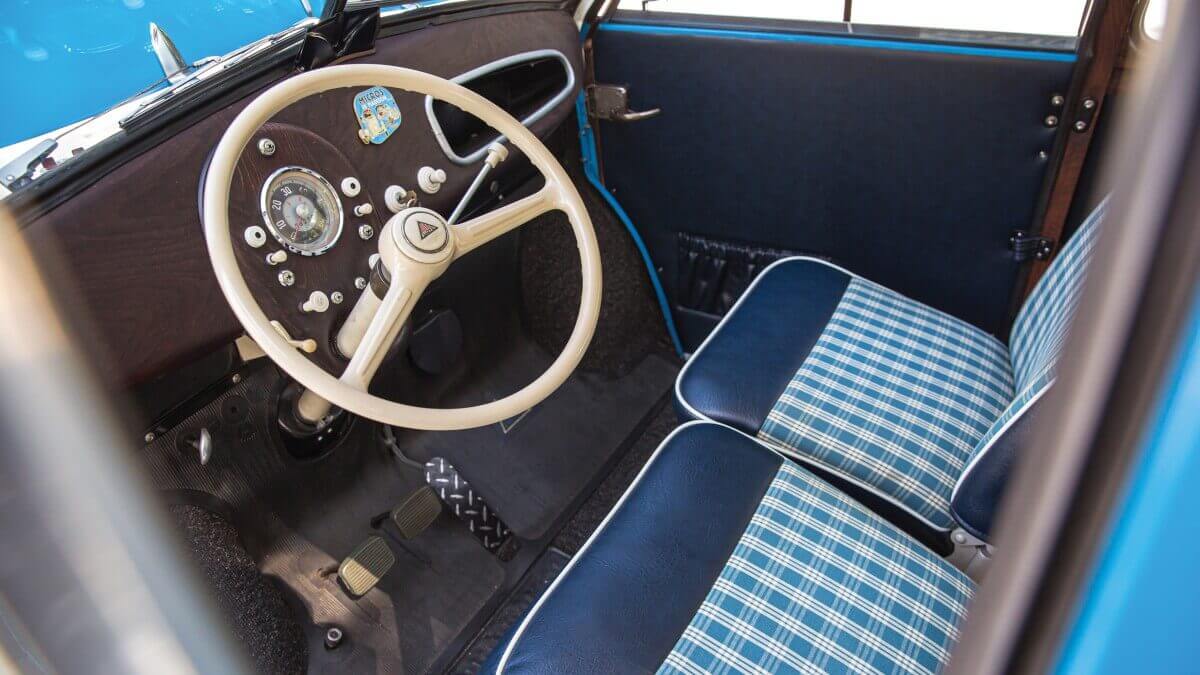 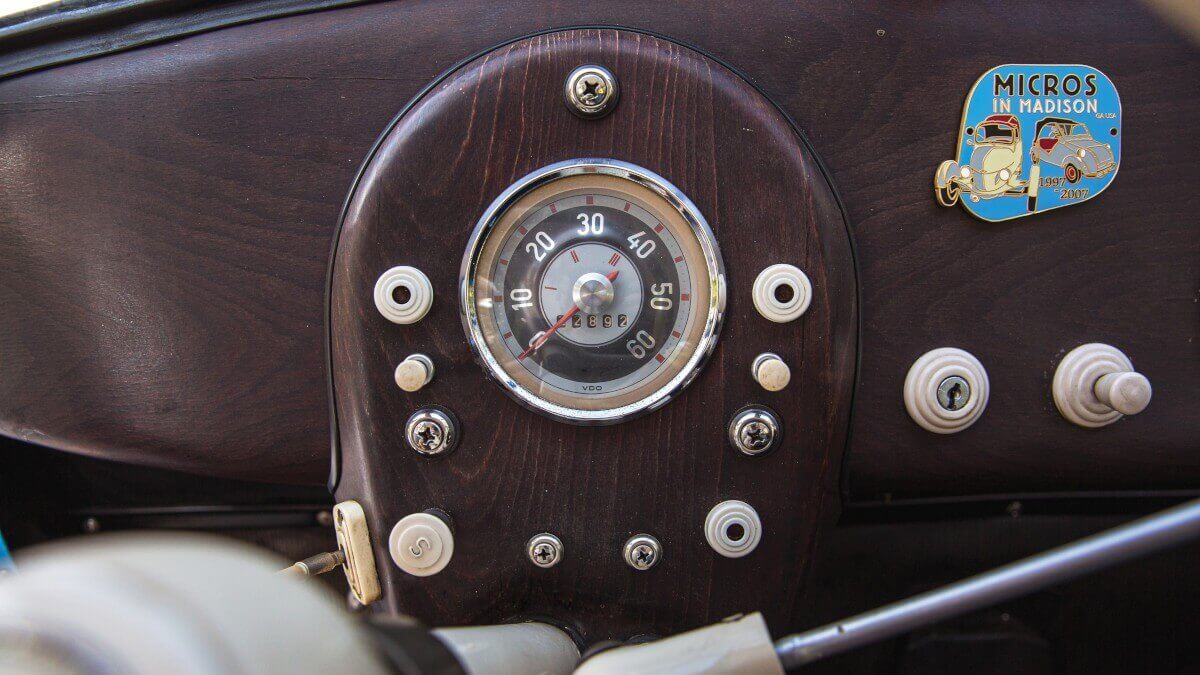 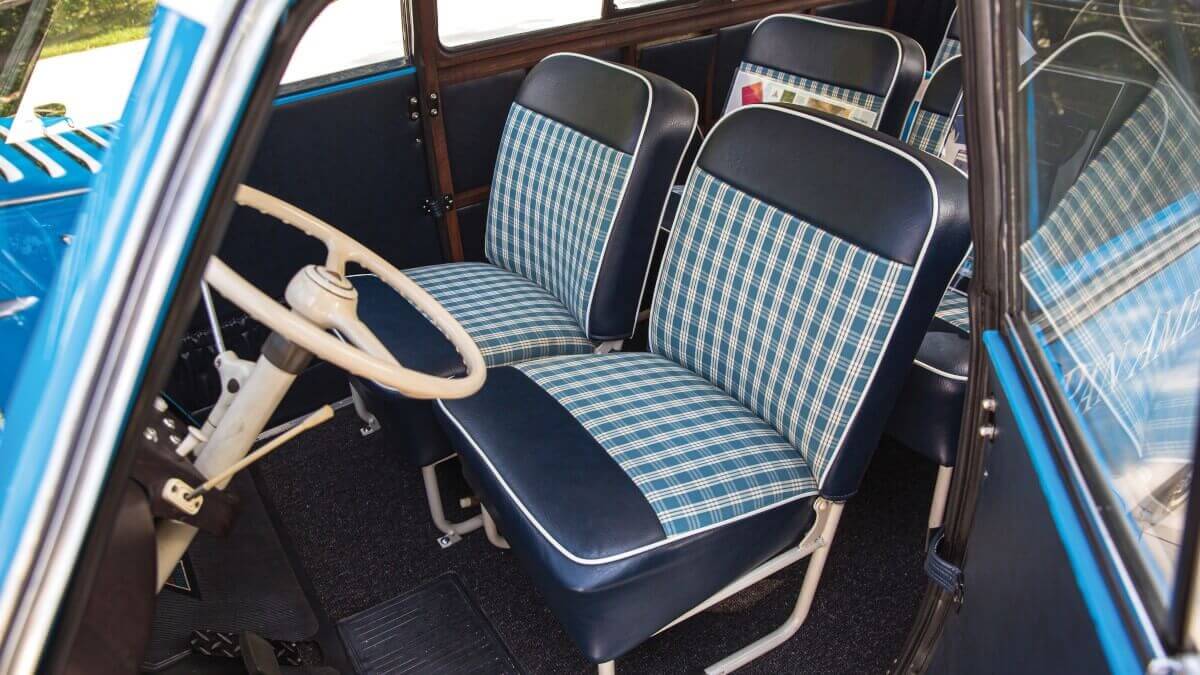 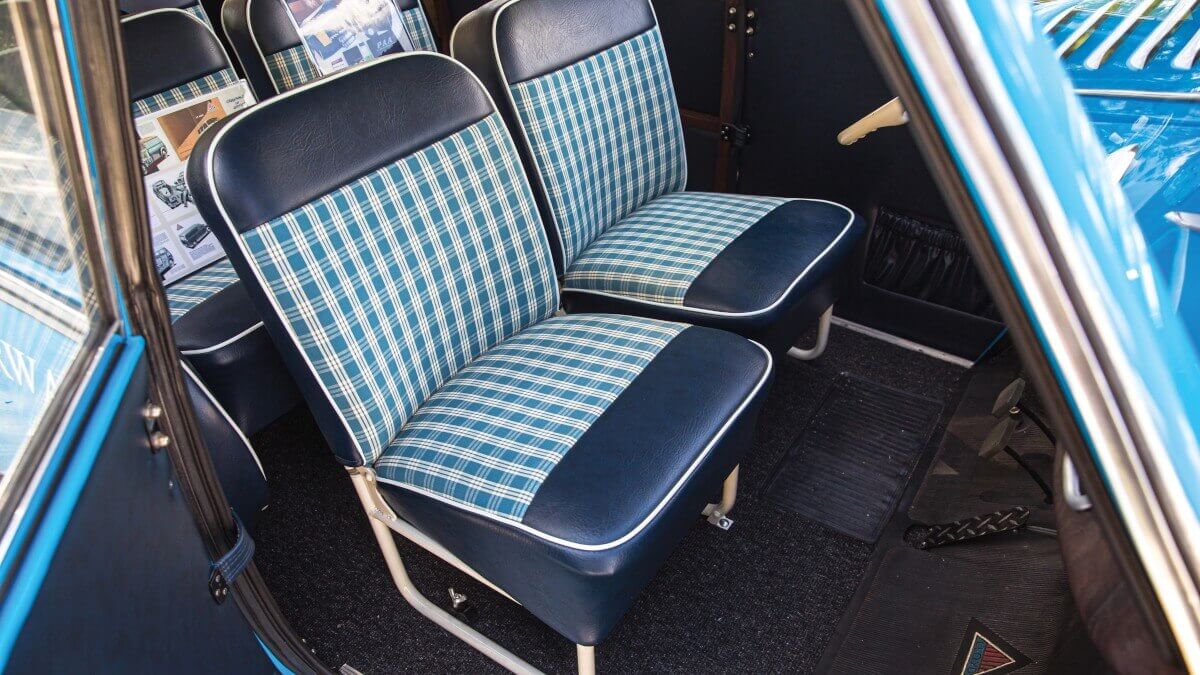 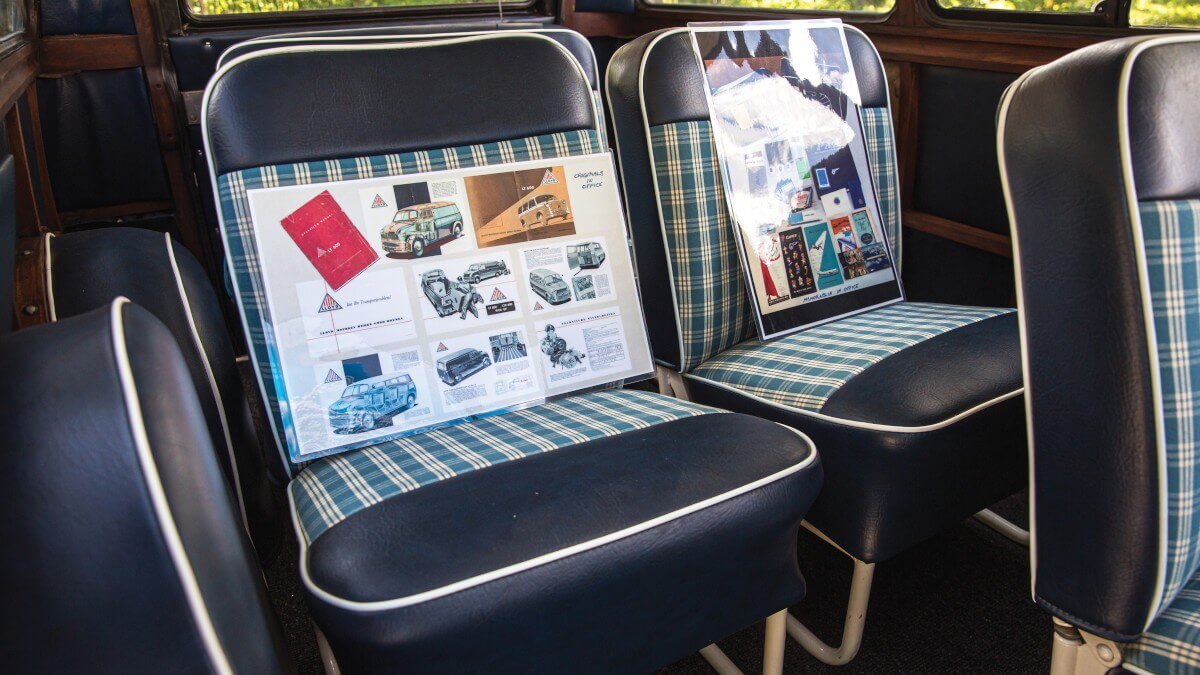 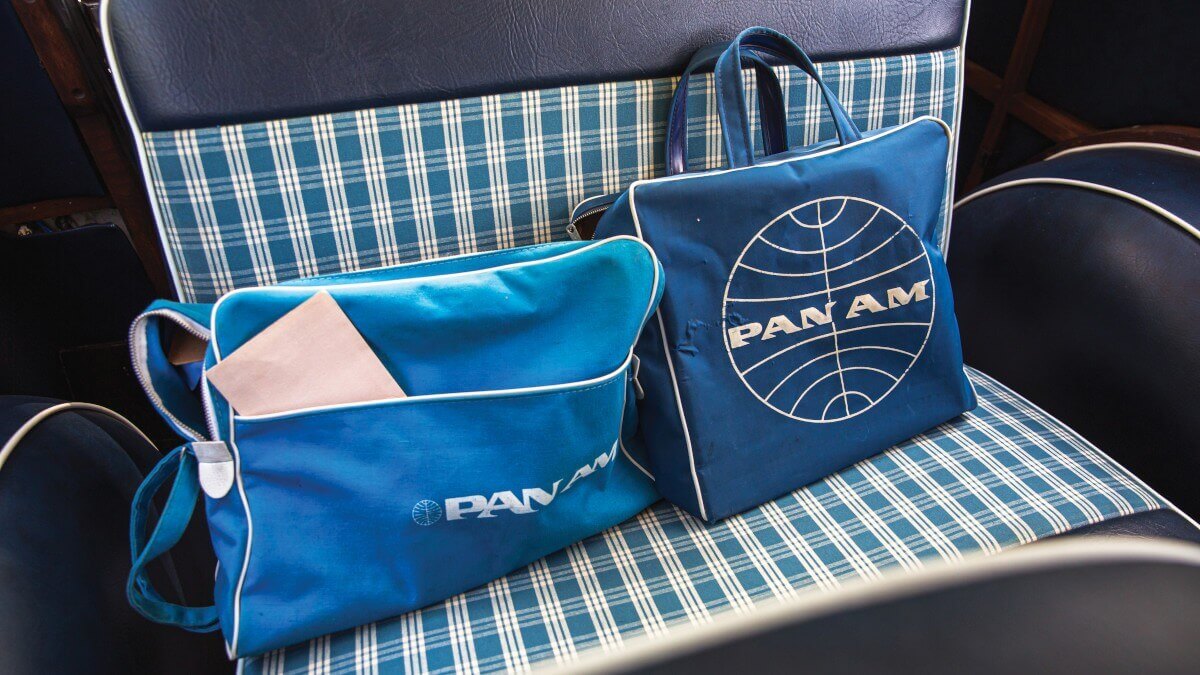 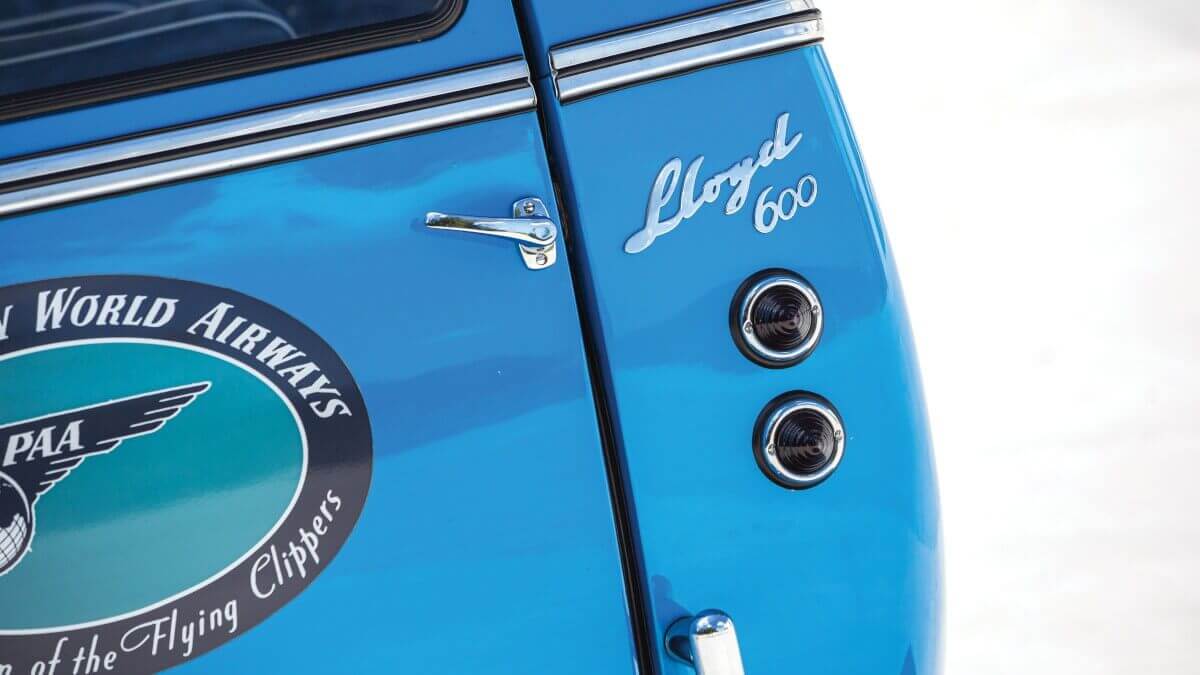 However, both the panel vans and the minibuses only had the front side doors with sliding windows, but no other side doors. So the entrance to the second and third row of seats was therefore extremely uncomfortable and the loading of the van could only be done through the rear door opening to the left side. The rear benches could be removed relatively easily to achieve a larger luggage space in the minibus. In contrast to the Volkswagen Type 2, the engine was located under a small hood at the front. In the LT 500 it was an air-cooled two-cylinder two-stroke engine with 386 cc displacement and 9.6 kW/13 hp, while from September 1955 onwards also the LT 600 was available with 14 kW/19 hp from 596 cc. The power was transmitted to the front axle via an unsynchronised three-speed gearbox. The LT 500 had a topspeed of 60 kph (37 mph) while the LT 600 reached a maximum of 80 kph (49.7 mph).

Even for the production of the van, there weren’t enough steel supplies available at the beginning, so the steel platform was given a timber framework and this was clad with plywood apart from the front of the vehicle. It wasn’t until 1954 that the flanks were also made of sheet steel, and from 1957 the complete body was made from steel. From mid 1956 a large folding sunroof could be ordered. Until the bankruptcy of the parent company Borgward in 1961, 9,900 LT 500 and 14,768 LT 600 were built. Although two-stroke cars weren’t rather popular in the USA, Lloyd was able to export a considerable number of the LT 600 there. Some of these vehicles were used by the airline Pan American World Airways (Pan Am) to transport the crews from the aircrafts to the hotels and back. Such a Lloyd LT 600 in perfectly restored condition will be sold at RM Sotheby’s in October as part of ‘The Elkhart Collection’ without reserve. The new owner will receive a small collection of typical Pan Am items and rare original Lloyd sales brochures.