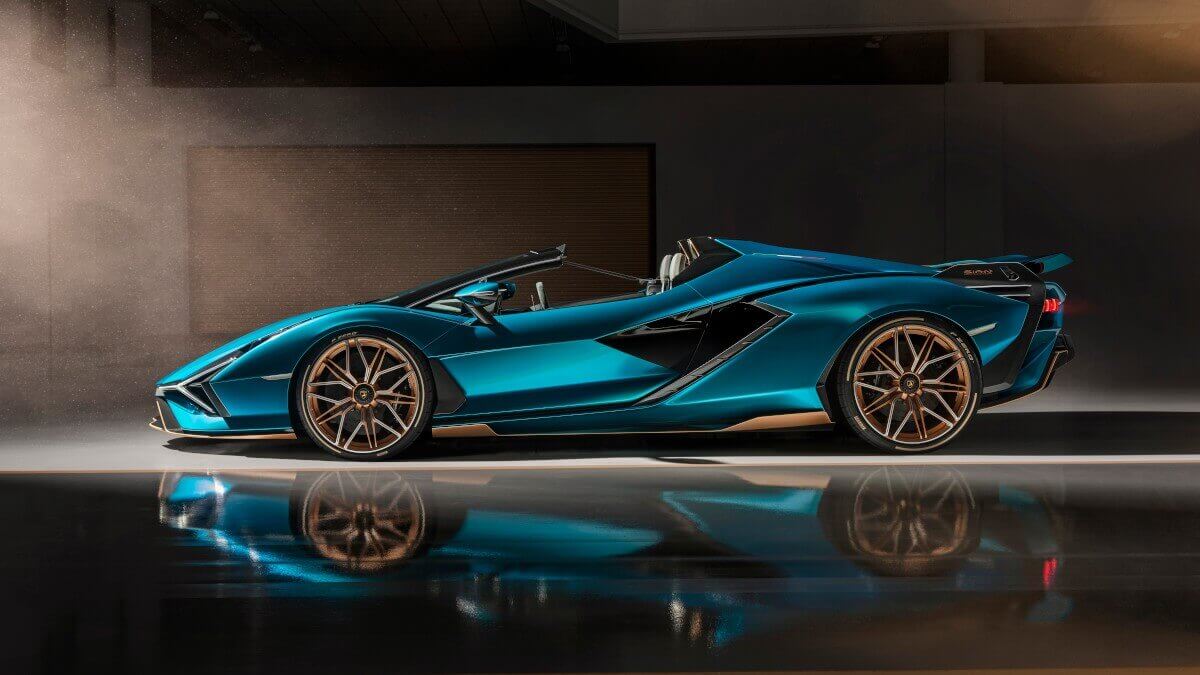 Last year, at what was probably the last IAA in Frankfurt, the spotlight was on the Lamborghini Sián, which was given the additional name ‘FKP 37’ in honour of the engineer and manager Ferdinand Karl Piëch, who died shortly before. This supercar, limited to 63 units, is the first production vehicle with hybrid technology to be built in Sant’Agata. Behind the passengers, a 6.5-liter V12 petrol engine and a 48-volt electric motor work together to produce a system output of 602 kW/819 hp and 758 newtonmeters or torque. As there had already been Roadster versions of the previous limited top models such as the Reventón, Veneno and Centenario, many experts suspected that the Sián would also follow in an open version. Rightly so, as we have known since last night.

While the Coupé was limited to 63 units, as mentioned above, the Sián Roadster is only available 19 times. If you put these two numbers in the right order, the year of Lamborghini’s foundation is the result, 1963. In terms of performance, the 819 hp of the closed version remains. This means that the Roadster can accelerate from a standstill to 62 mph in 2.9 seconds and will reach a topspeed of more than 217 mph. The 34 hp electric motor is integrated into the gearbox and supports the vehicle during hard acceleration manoeuvres to bridge the shift pauses. In slow driving conditions, for example when parking or reversing, the Sián can also be moved purely electrically. Instead of classic lithium-ion batteries, Lamborghini is the first manufacturer to use a supercapacitor, which offers ten times the storage capacity and three times the performance of a battery of the same size. It is located in the bulkhead between the interior and the engine compartment, which ensures a good weight balance. The supercapacitor and electric motor together weigh just 34 kilograms. 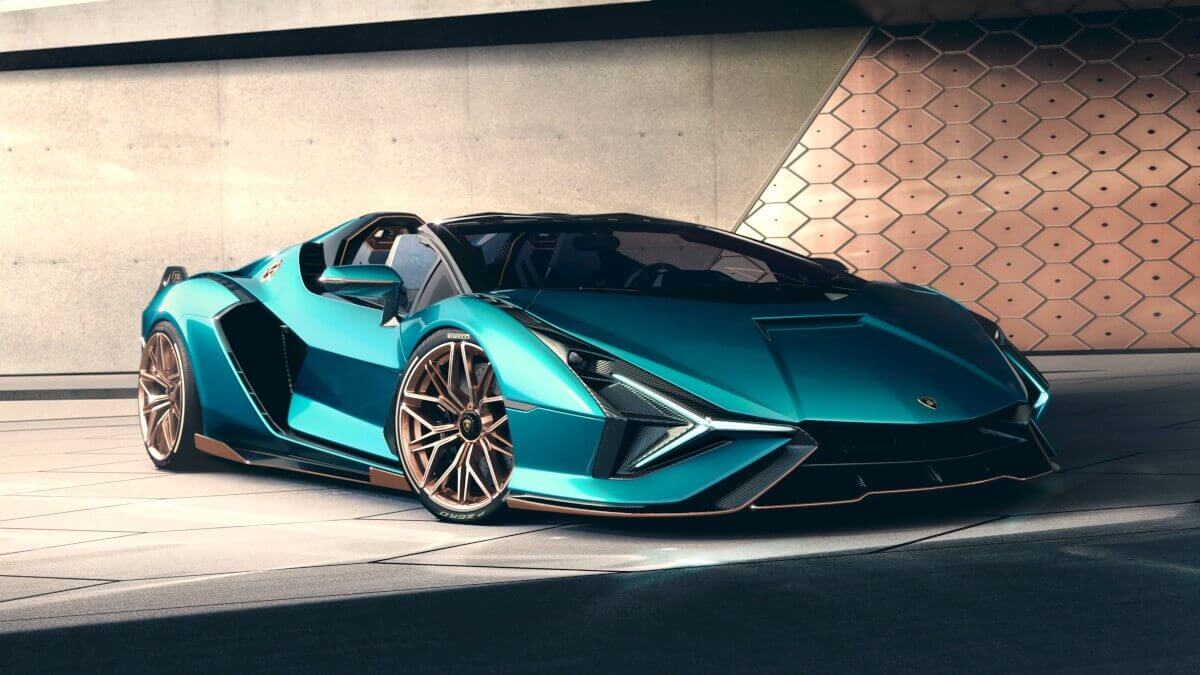 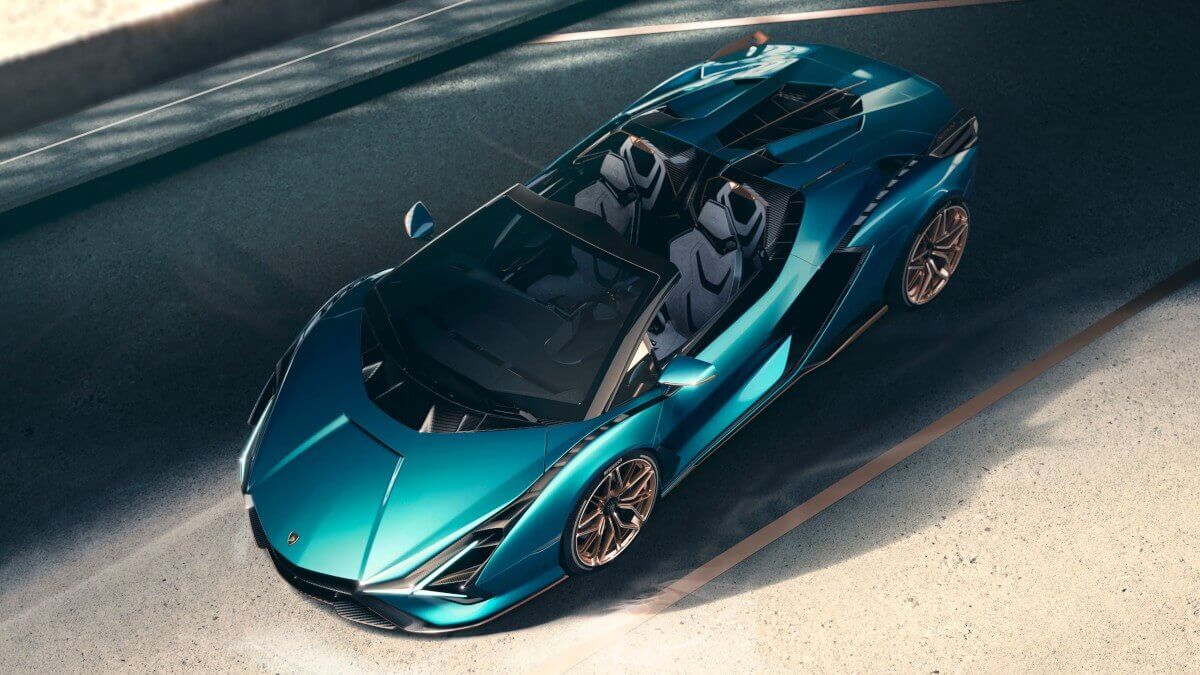 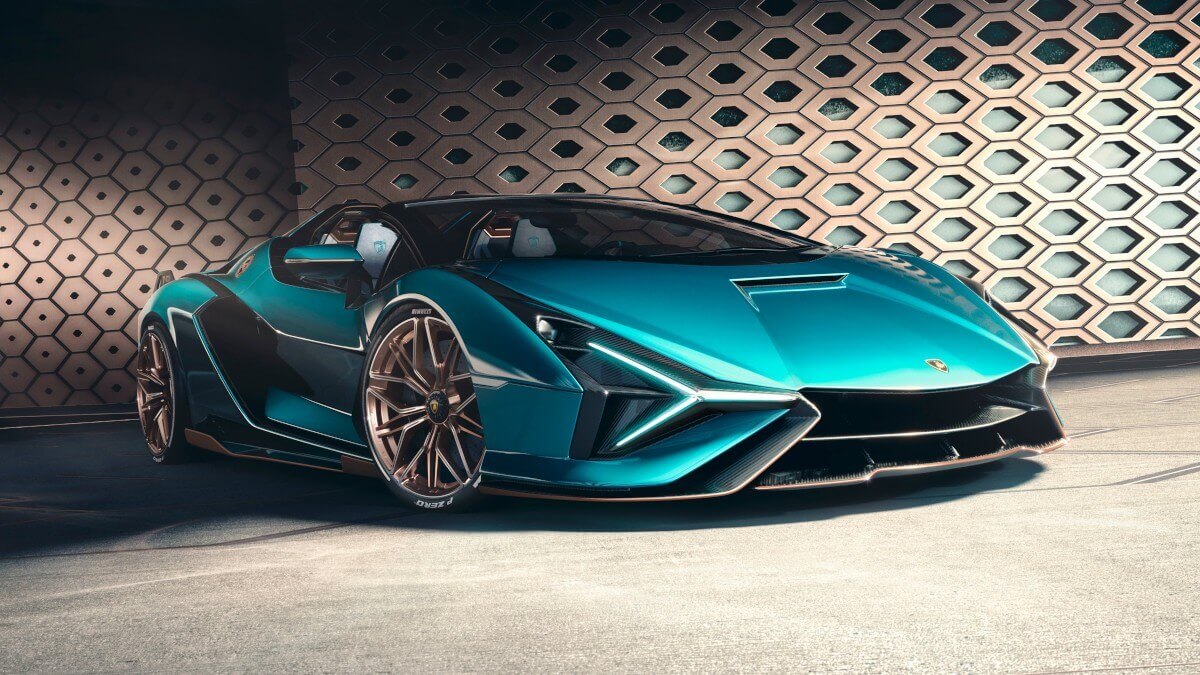 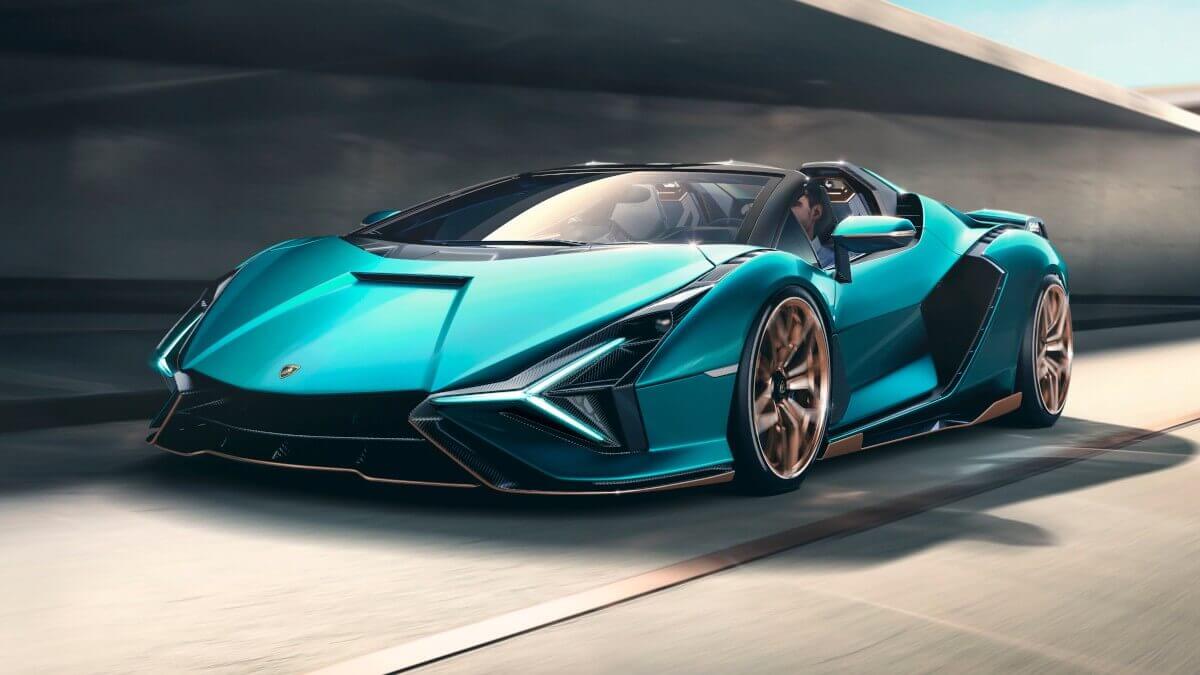 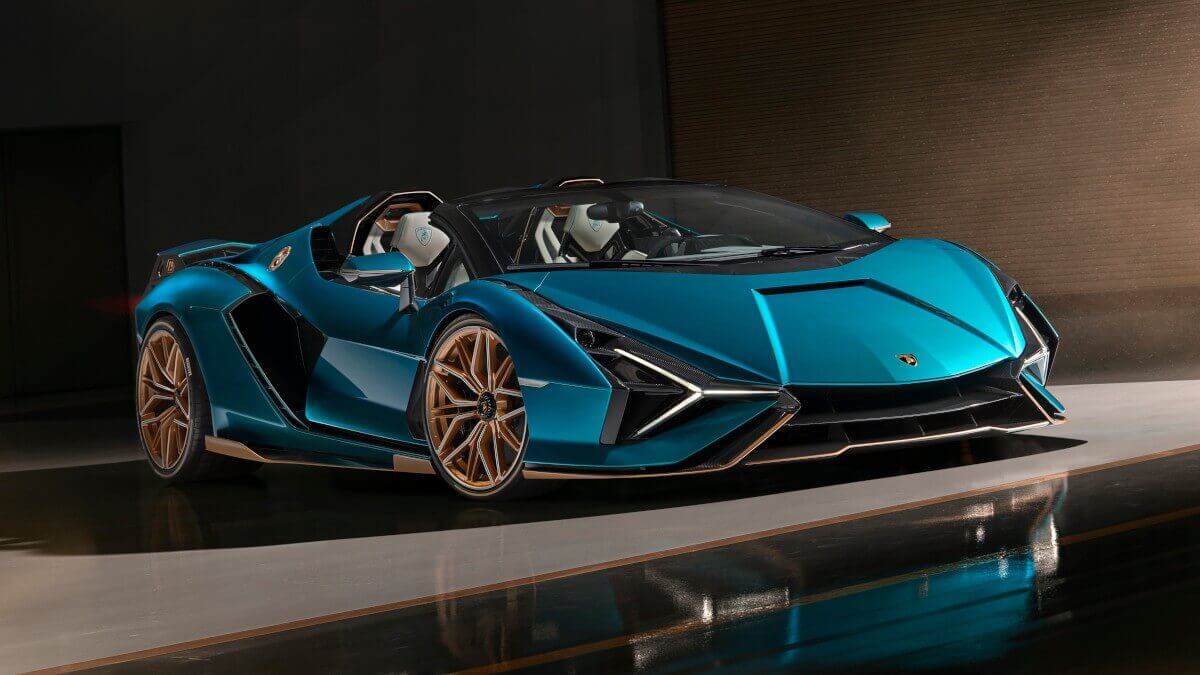 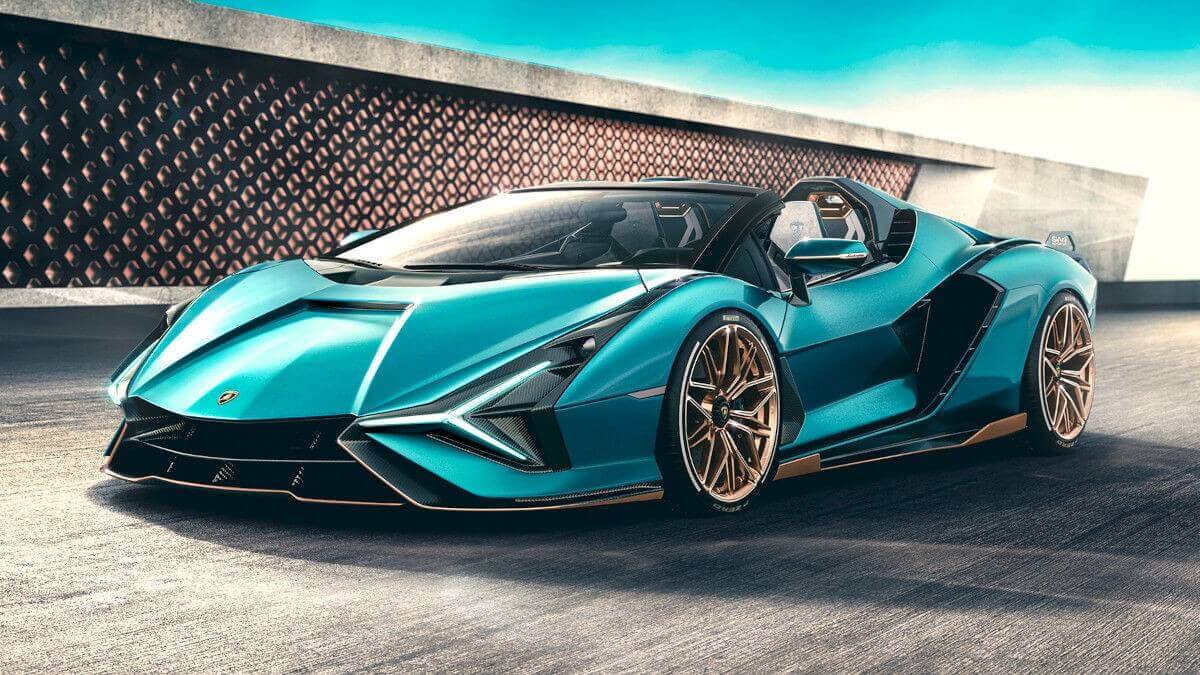 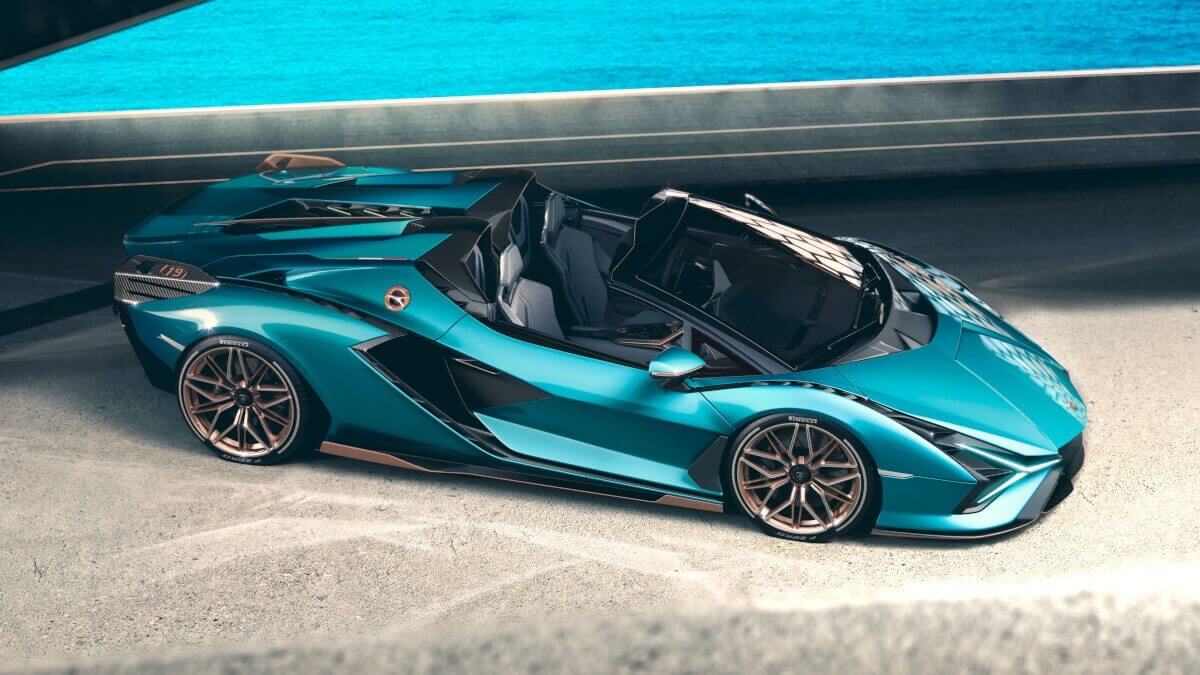 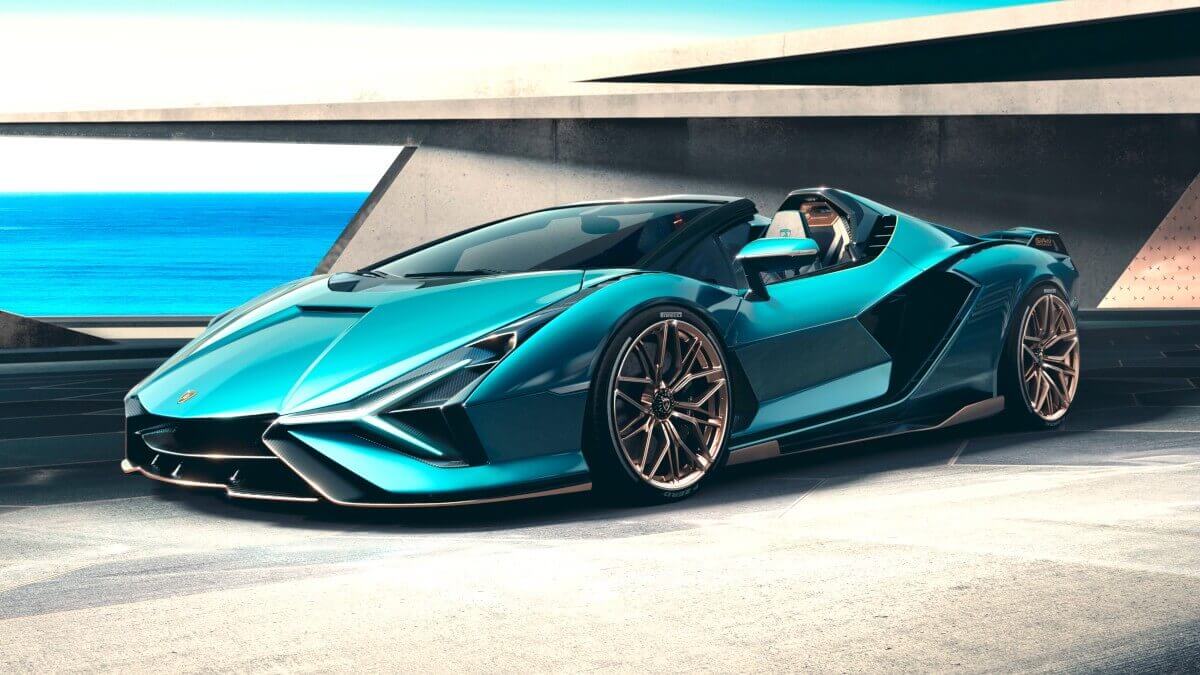 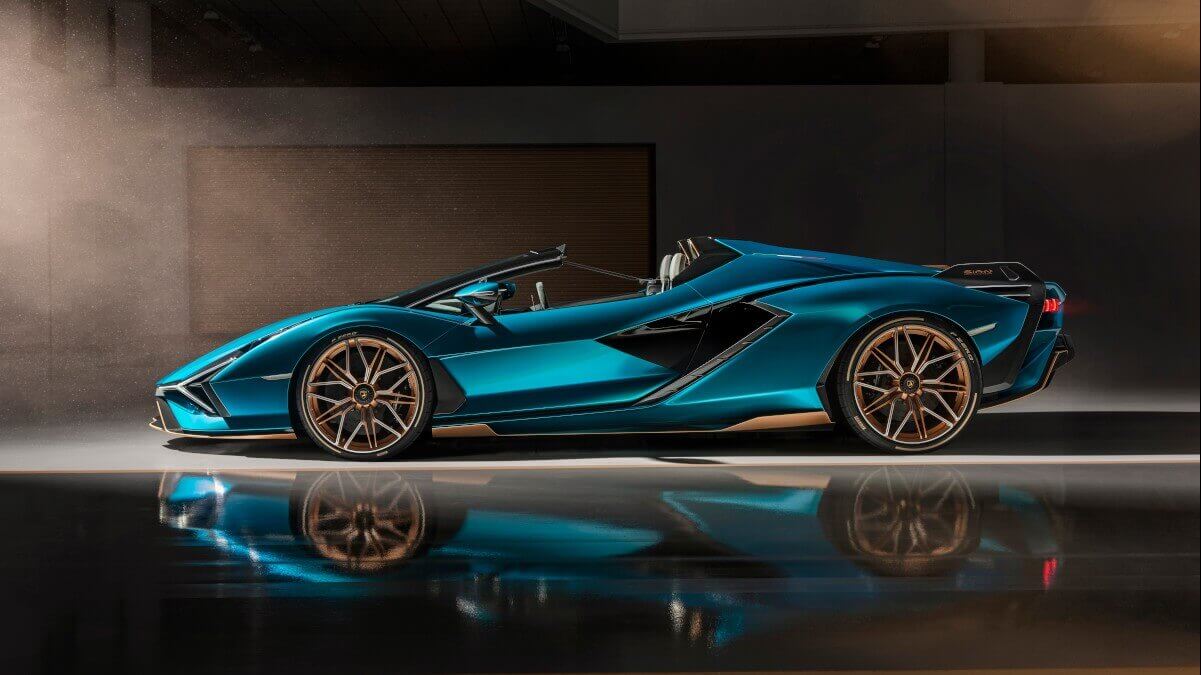 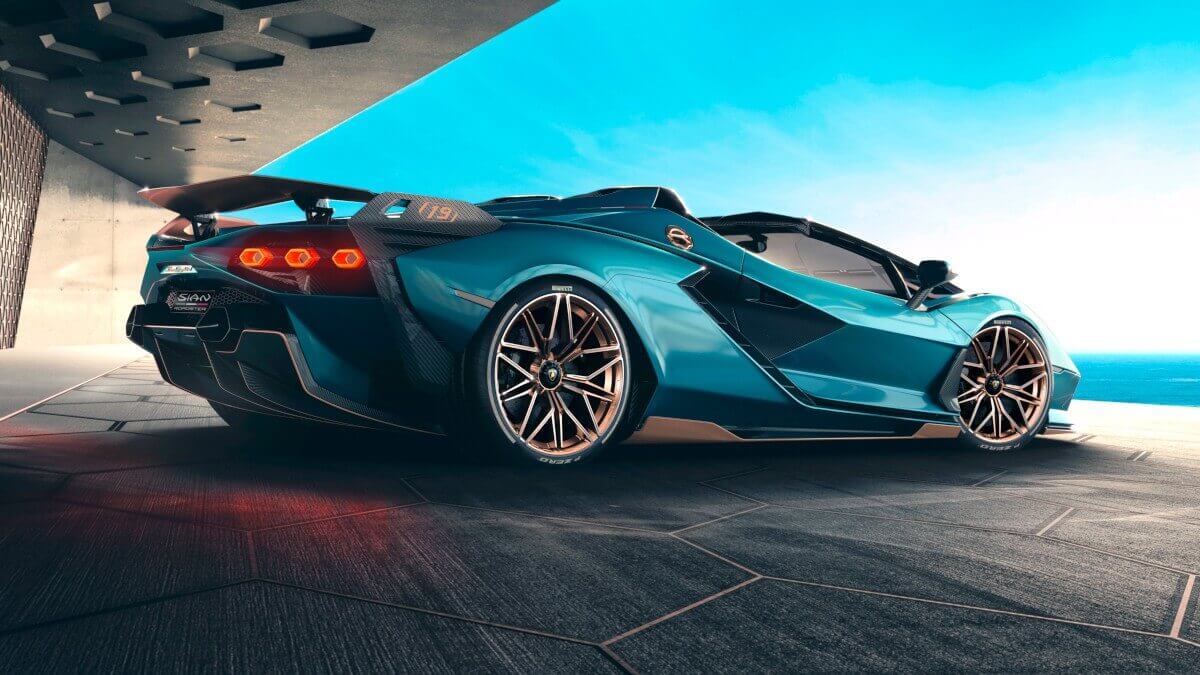 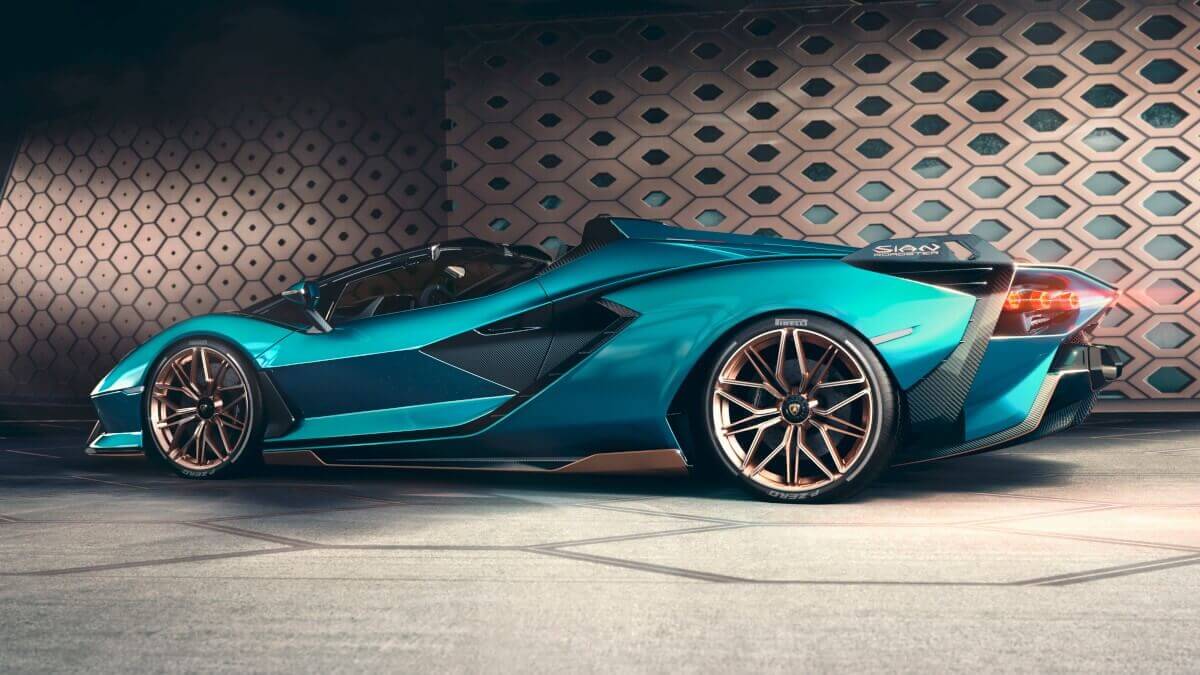 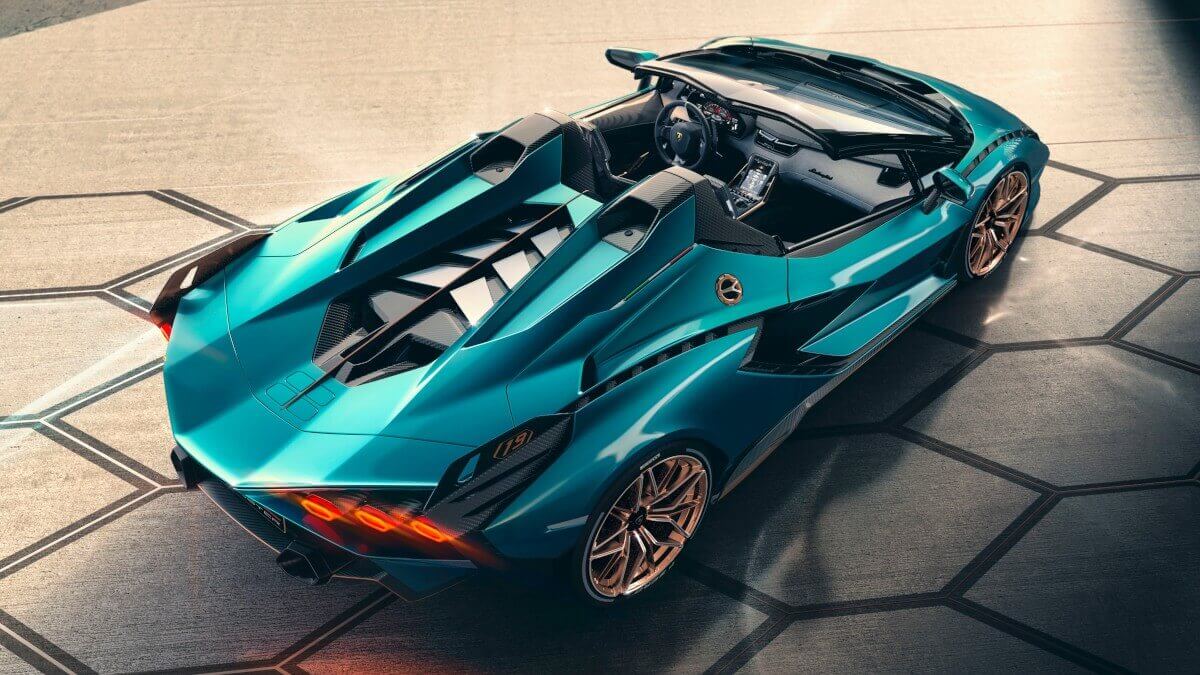 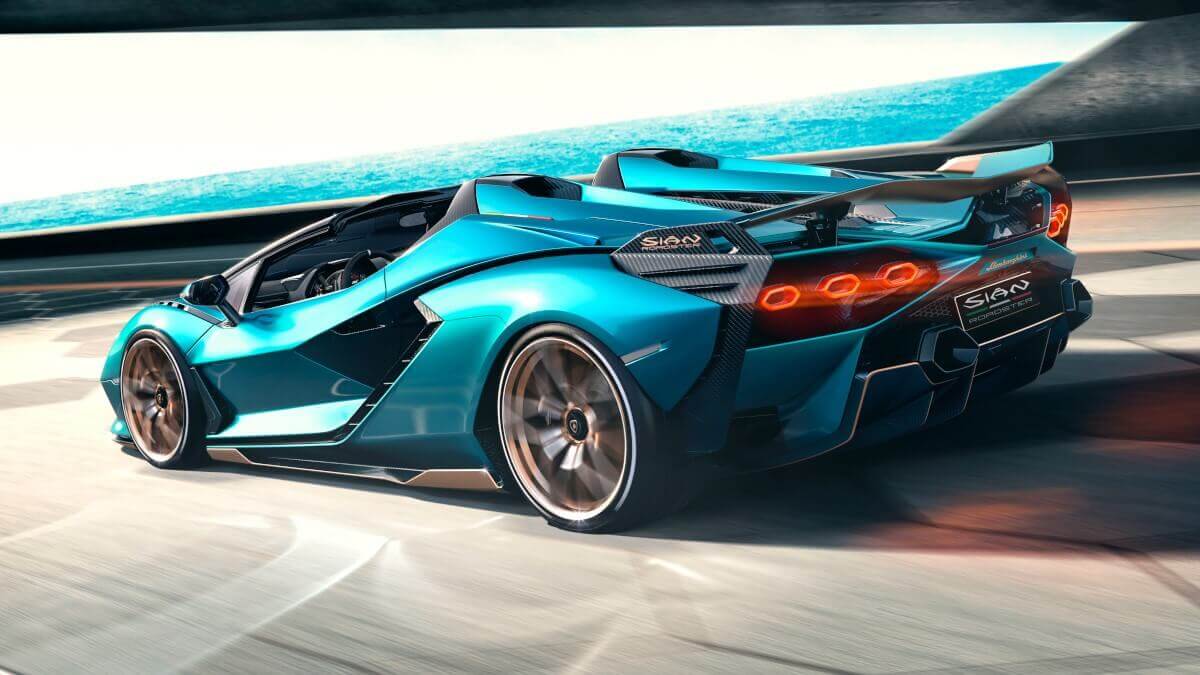 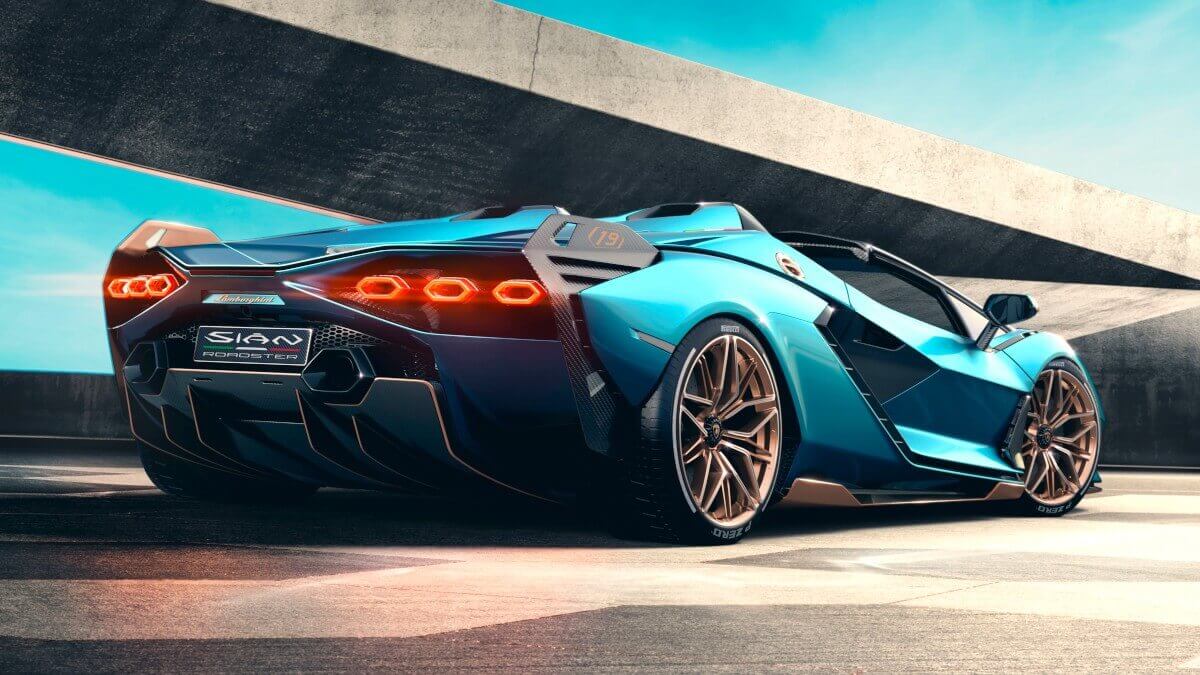 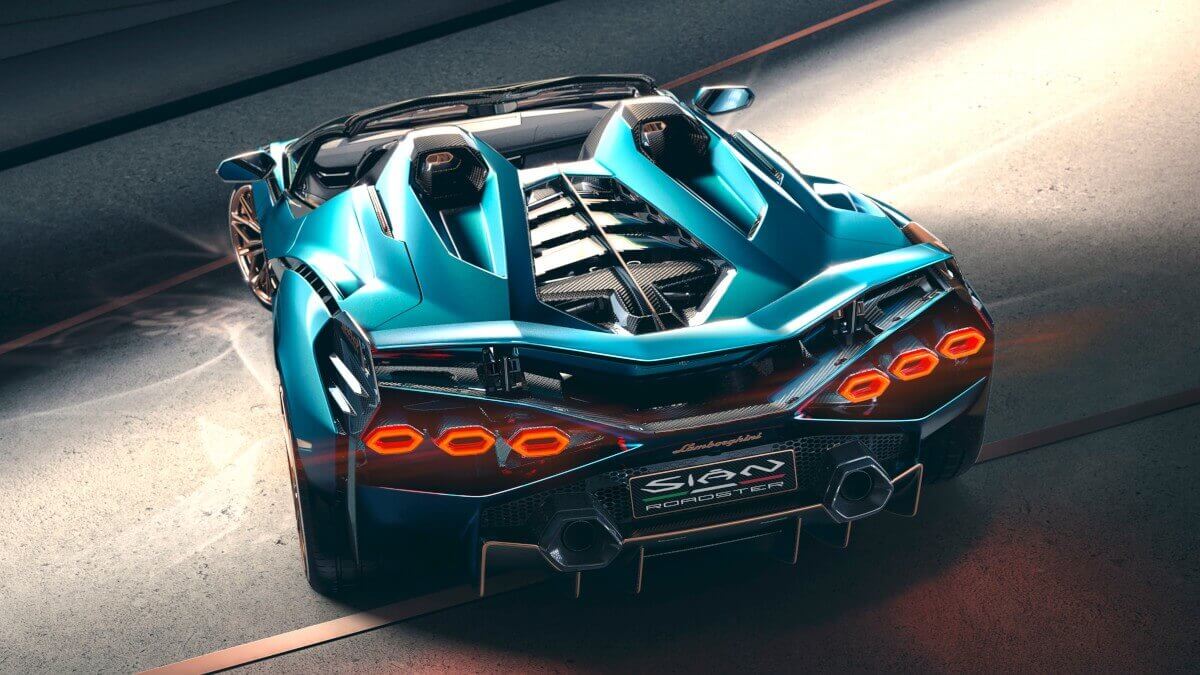 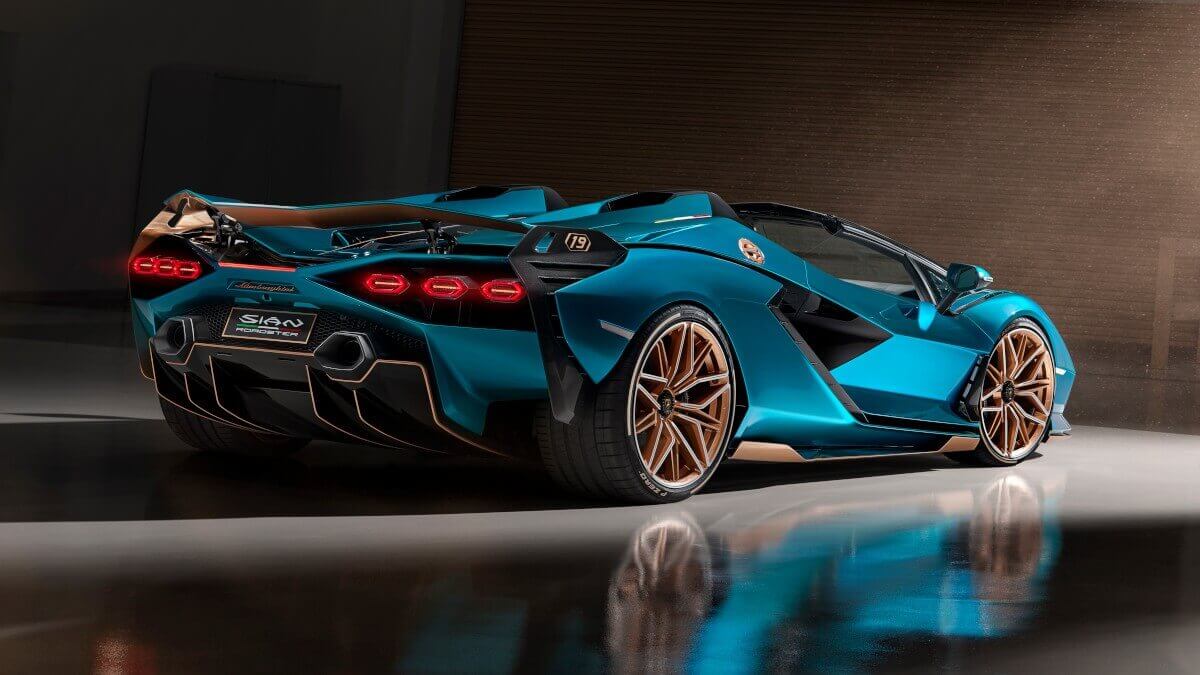 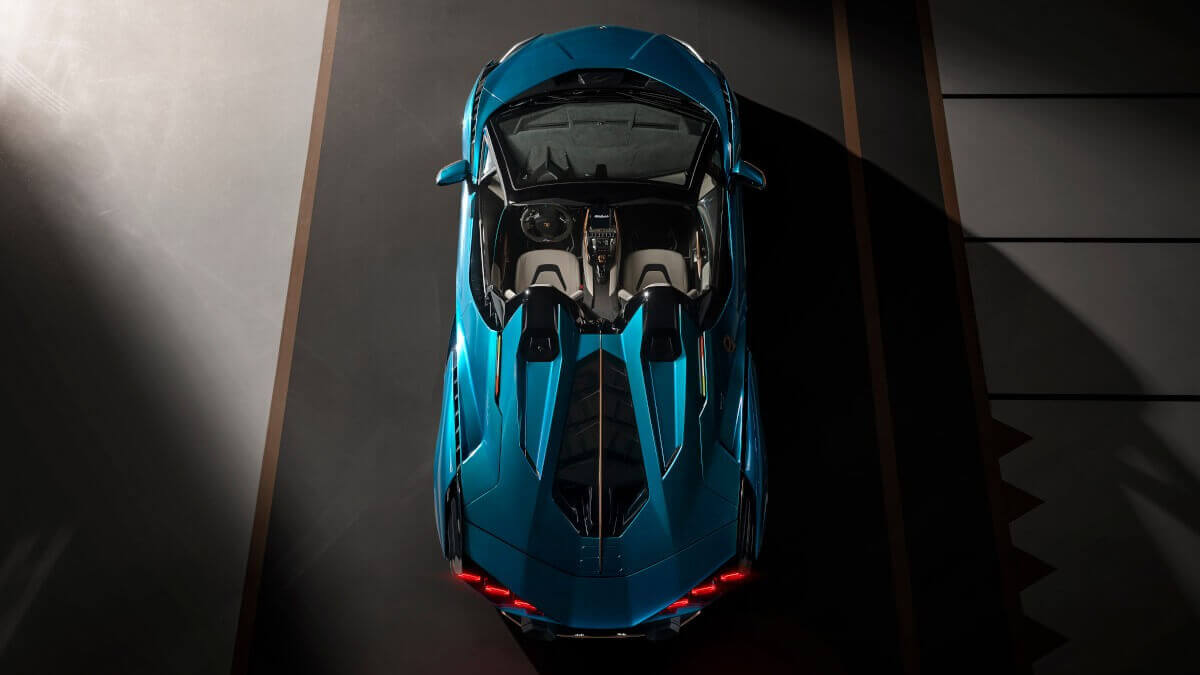 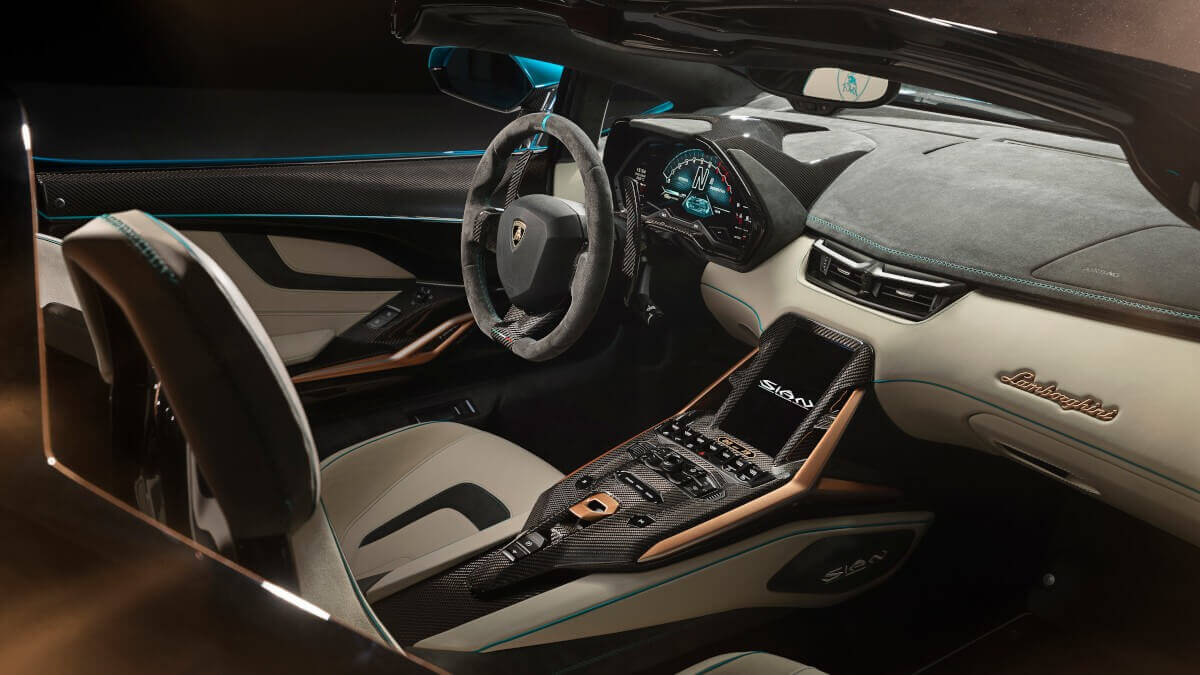 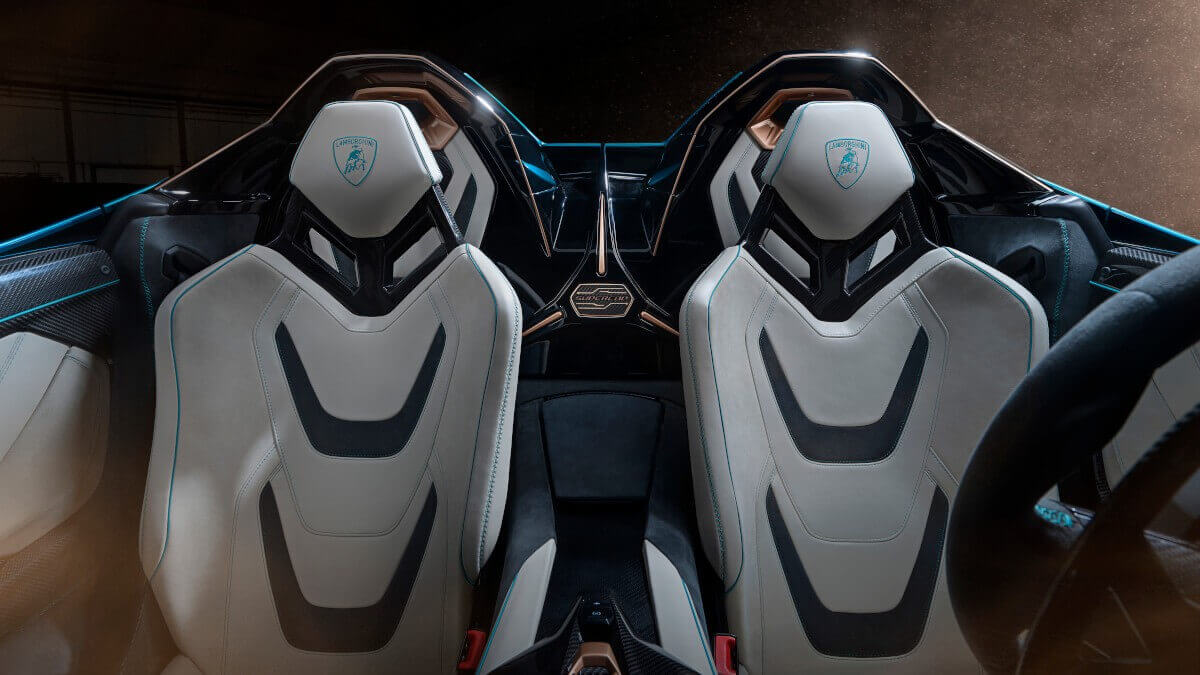 For the presentation vehicle, the Ad Personam department, together with Lamborghini Centro Stile, created the exclusive color ‘Blu Uranus’, which represents the possibilities for individualisation of the sports car. Together with the 19 customers, they will be working in the coming weeks to configure each individual vehicle in a unique way, whereby color gradients or elements in visible carbon fibre can also be incorporated. Lamborghini has chosen the color ‘Oro Electrum’ (gold metallic) to identify this and the brand’s future hybrid models, which can be seen on the wheels, sills and various other body details of the Sián Roadster shown in the press photos. The interior also features metal details and the brand name above the glove box in this color. Lamborghini uses black Alcantara and white leather in combination with contrast stitching in ‘Blu Glauco’ for the seats, door cards and dashboard.

In terms of design, the Sián is deliberately reminiscent of legendary classic Lamborghini models such as the Countach, but also introduces a new design language that was first shown with the concept car Terzo Millenio. In addition to hexagonal elements, there are Y-shaped details derived from it, such as the LED headlights, which will probably also be found on future sports cars from Sant’Agata. In the wind tunnel, the Roadster, like the Coupé before it, was given a clearly aerodynamic basic shape with various elements to improve downforce. Special attention was paid to the fact that the Roadster’s missing roof doesn’t bring any disadvantages with it. At the rear there are active cooling wings whose control elements are made of a material that reacts to the temperatures of the exhaust system and enlarge the openings at high temperatures to provide more cooling air to the engine. The six hexagonal taillights and the active rear spoiler, which extends automatically at a speed of about 50 mph, complete the Sián Roadster.

Before there is too much interest, it should be mentioned that all 19 copies of the Lamborghini Sián were sold before the premiere, although not even the basic price was officially announced.