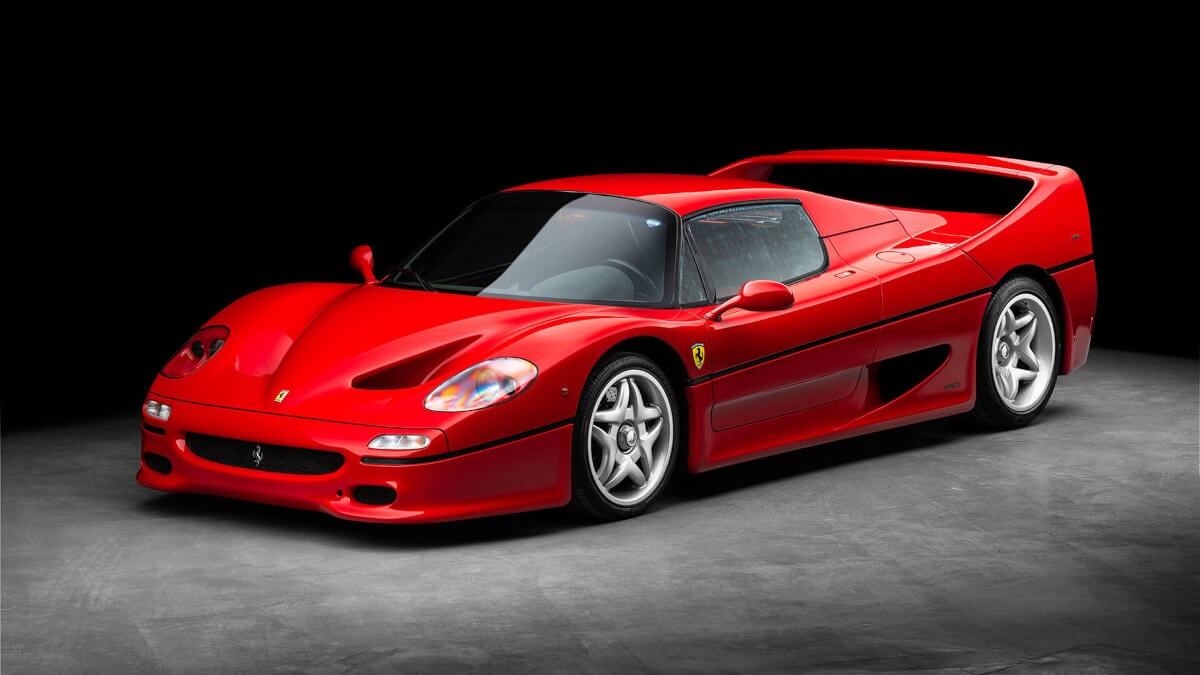 Ferrari – how many articles, features, books and other publications about this brand and its sports cars have been published worldwide until today? Probably hardly countable. Nevertheless, we dare to write another article in which we deal with the ‘gift’ of the 50th anniversary. Whereby the word ‘gift’ here must be deliberately placed in quotation marks. In the end, it was merely a ‘gift’ to the company’s own model range, while the selected few VIP customers had to pay around DM 750,000. In return, they also received a supercar that brought pure Formula 1 technology to the streets. The entire monocoque around the passengers was made of carbon fiber composites, as were the body parts, which is visible through the paint against the light in cars with original paint. The same was already true of the F40, which Ferrari had given itself as a gift for the 40th anniversary and subsequently sold to around 1,200 customers worldwide. The new model was given the name F50 to mark its premiere at the 1995 Geneva Motor Show. The aim was to produce the planned 349 units by the official anniversary in 1997, which was successfully.

Visualy, the F50, designed by Pininfarina, picked up some of the details of the F40, such as the side air intakes or the wide rear wing seamlessly integrated into the bodywork, but at the same time provided a more rounded look fitting into the 1990s. The hood was given an intimated Formula 1 nose to divide the two air outlets for the water coolers. Ferrarj also consistently designed the supercar as a Barchetta, a two-seater roadster with rudimentary fabric hood and a removable hardtop. The latter was delivered to the customers in a separate case. In terms of colors, most of them remained true to the typical ‘Rosso Corsa’ (red), which was also found on the brand’s racing cars. Only a few of them dared to use other colors like ‘Argento Nürburgring’ (silver), ‘Rosso Barchetta’ (dark red), ‘Giallo Modena’ (yellow) or ‘Nero Daytona’ (black). Inside there was only the choice between plain black or black leather with red seat center panels. 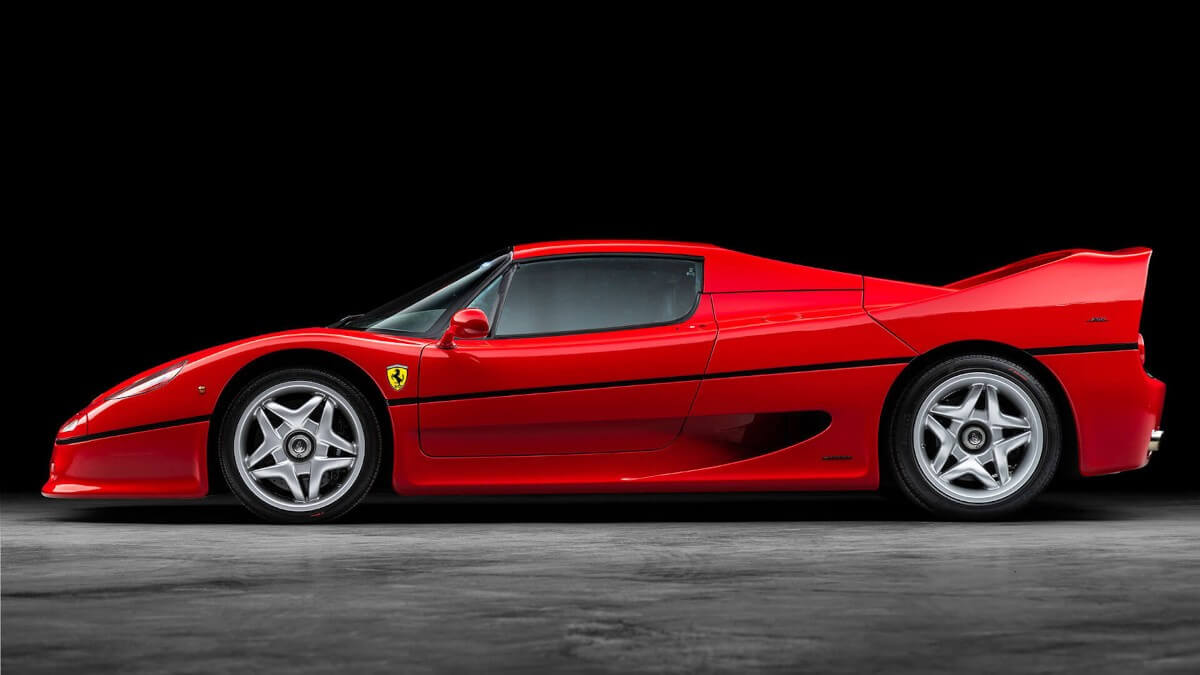 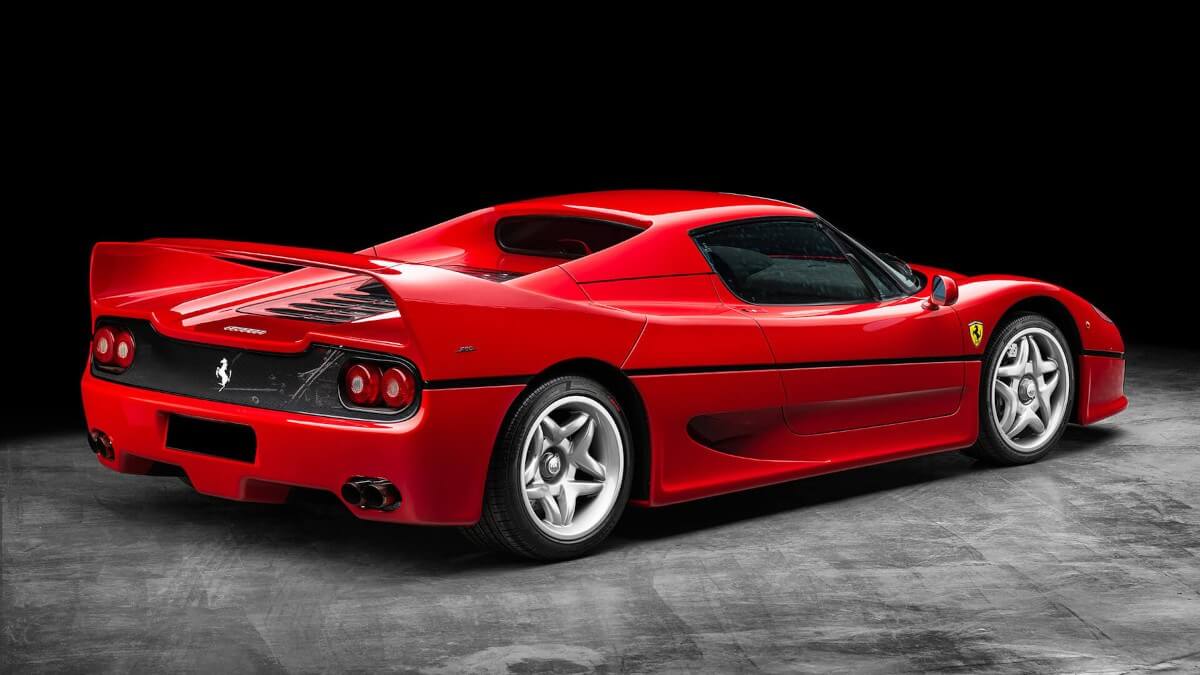 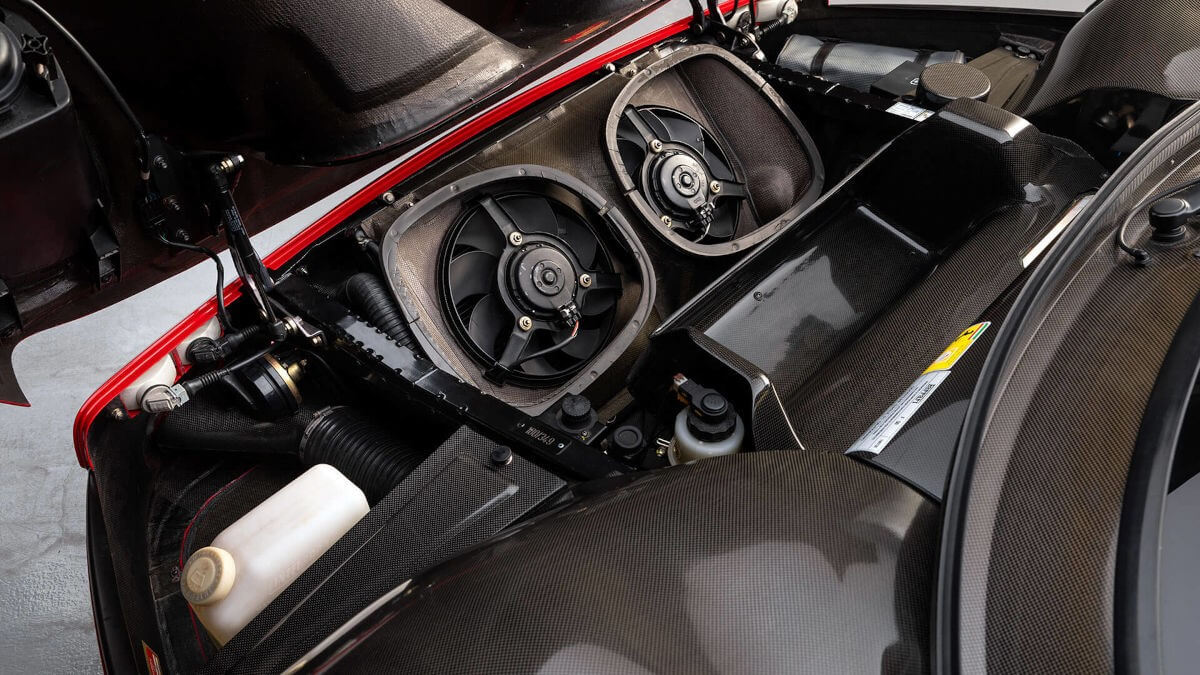 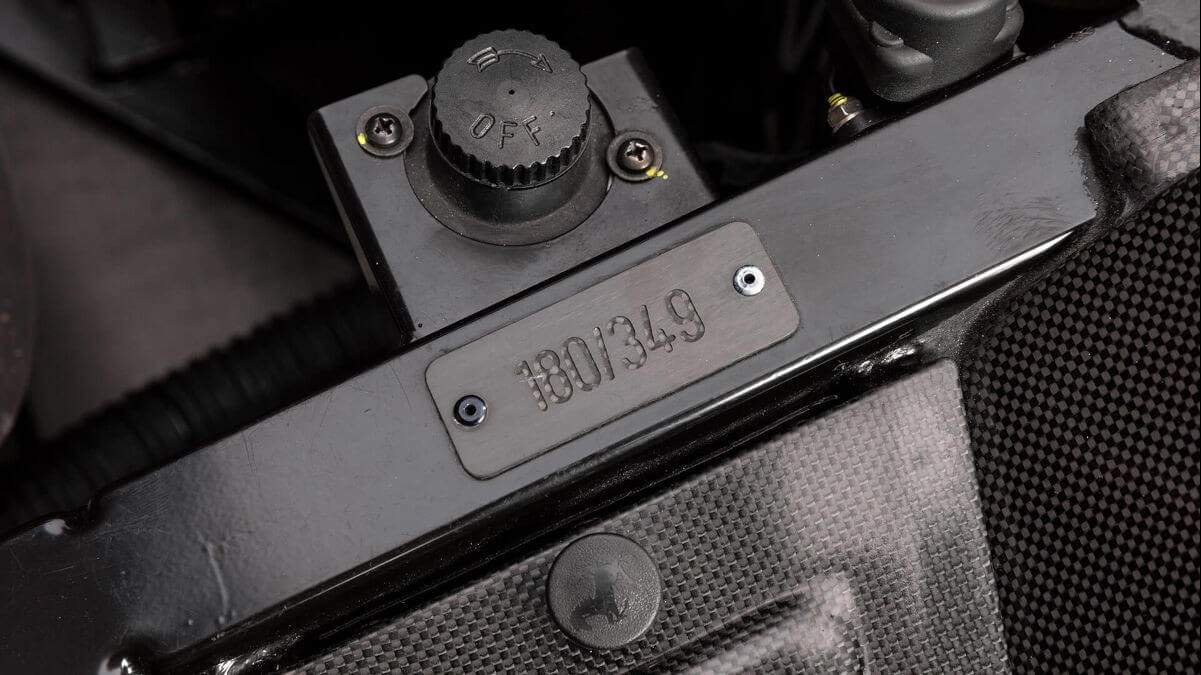 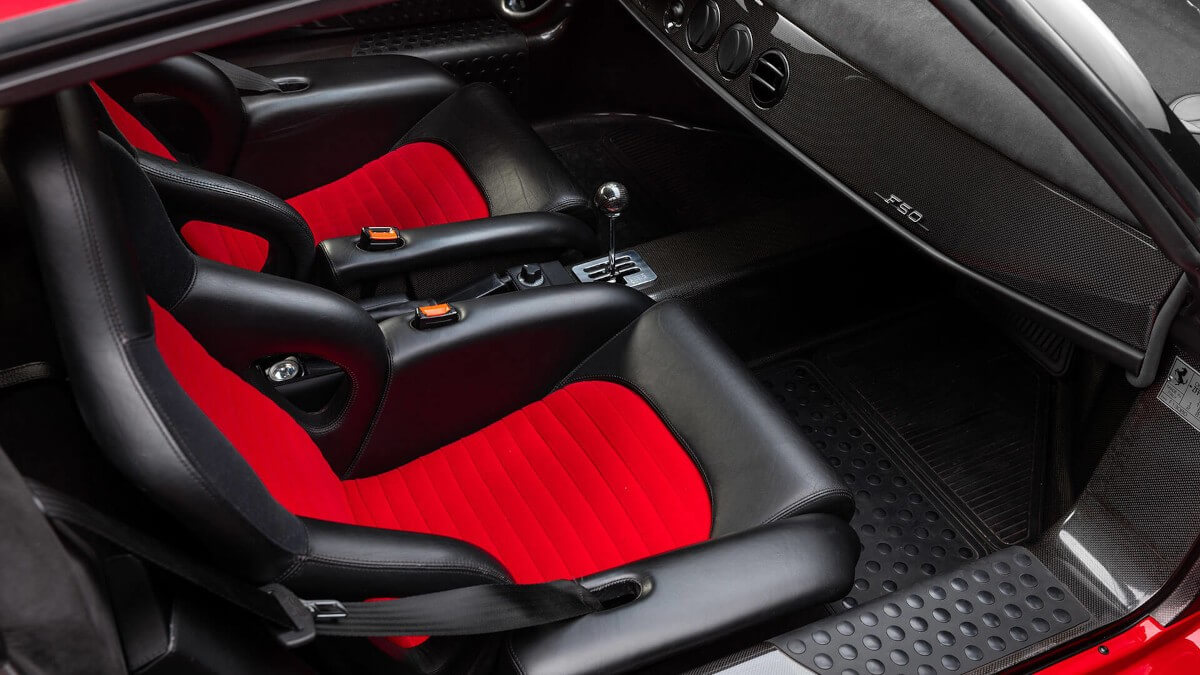 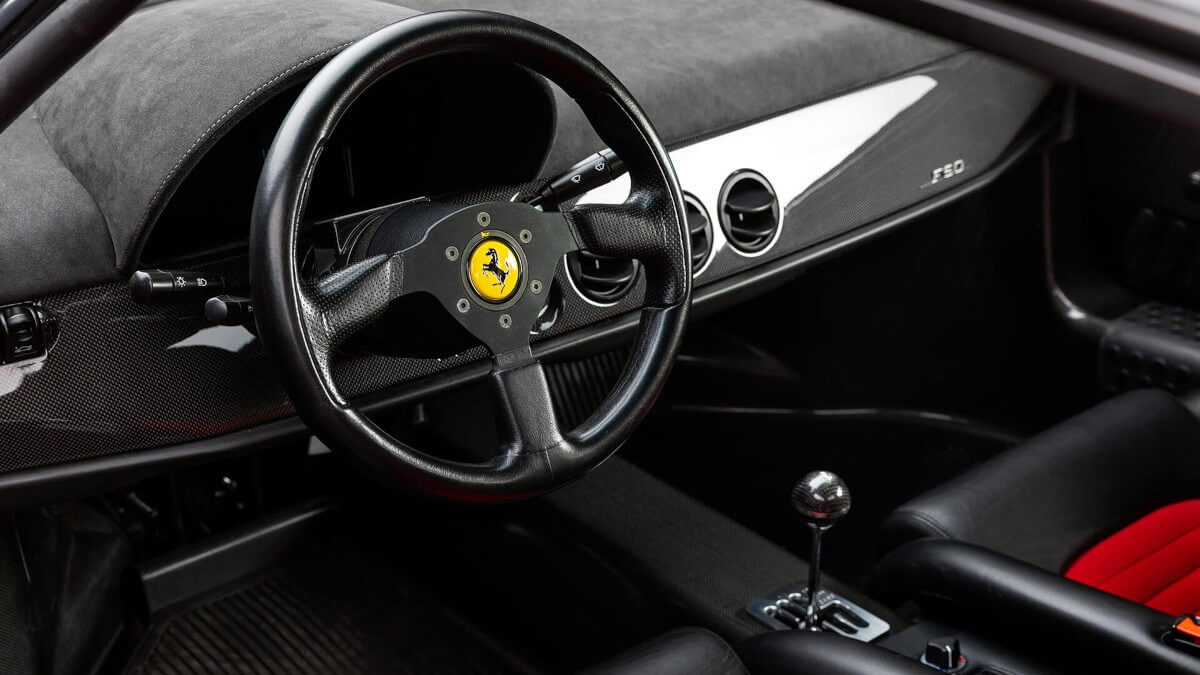 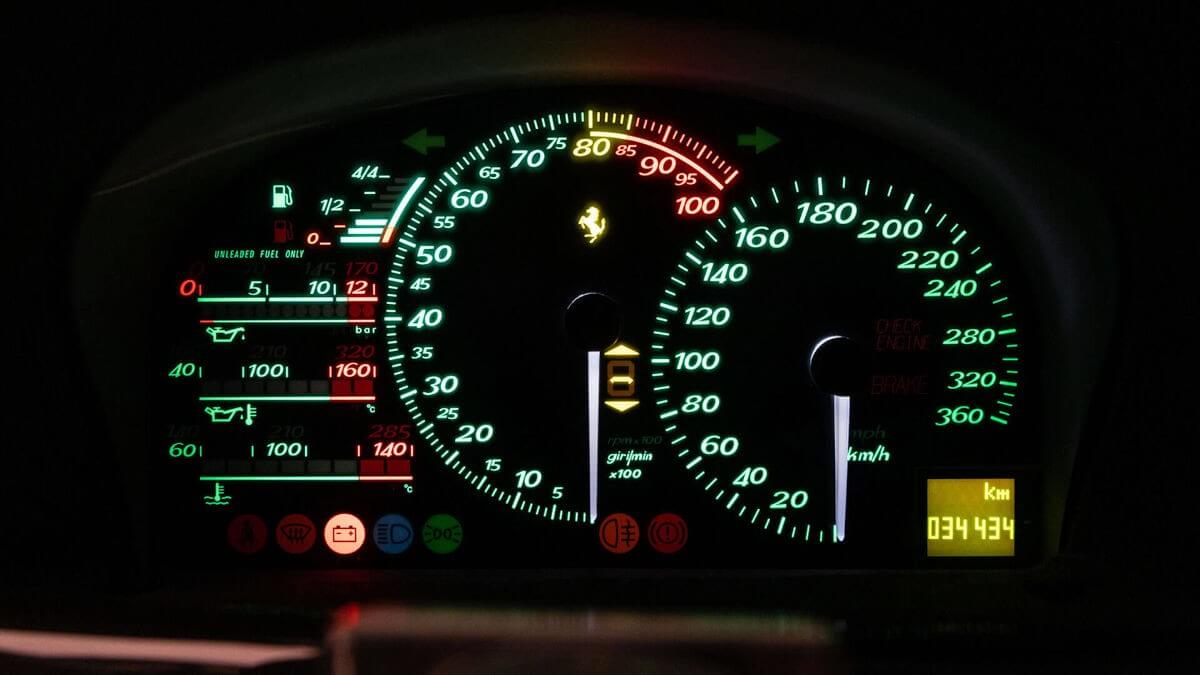 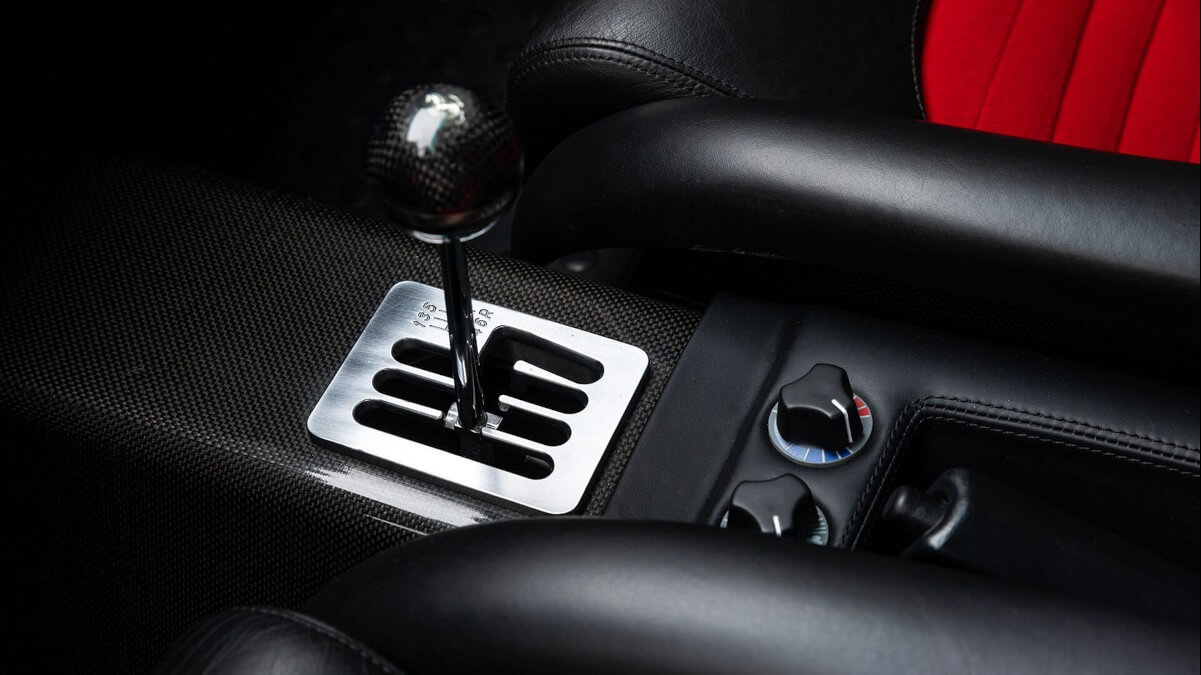 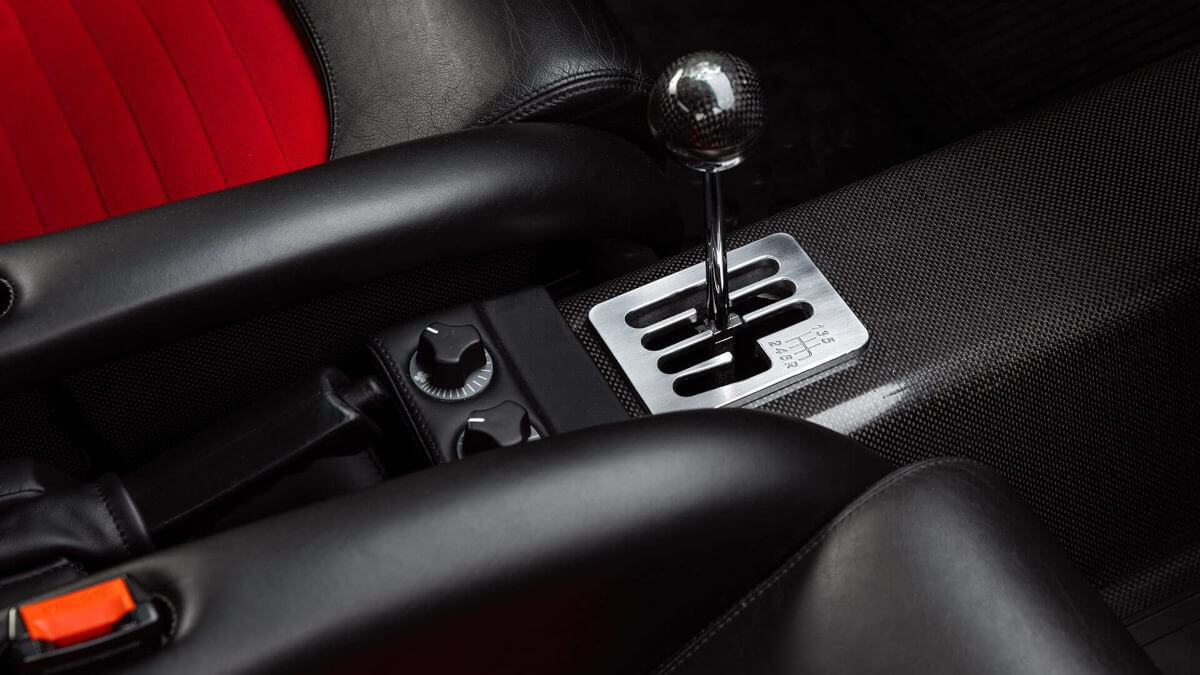 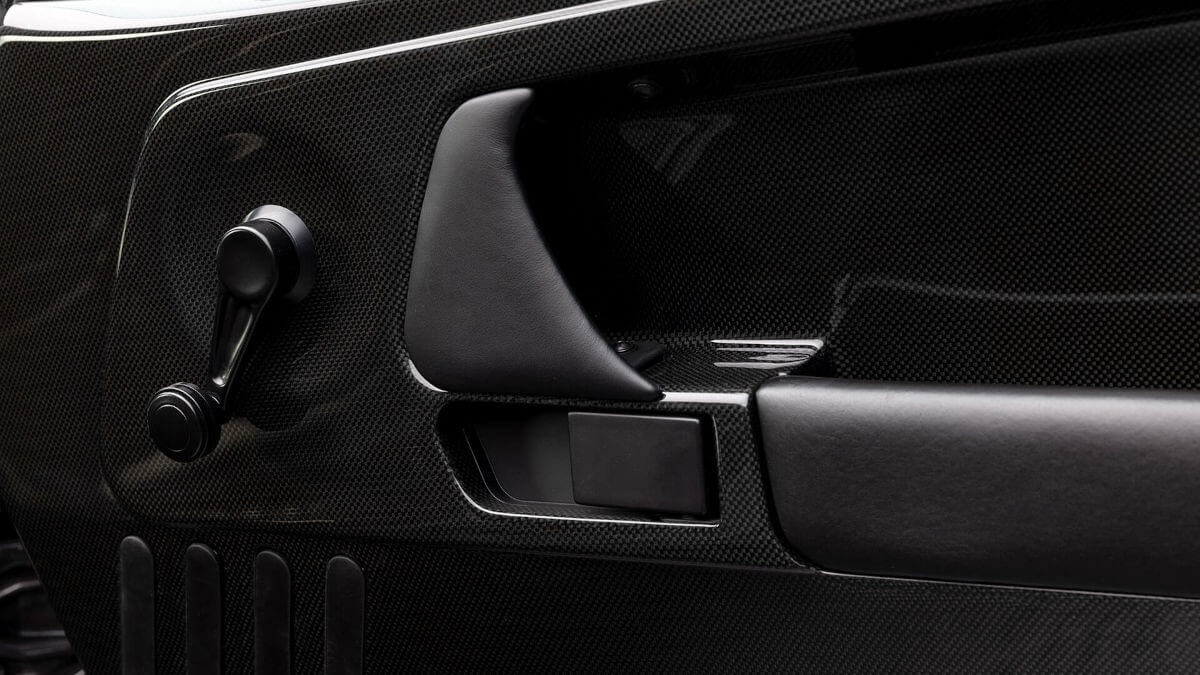 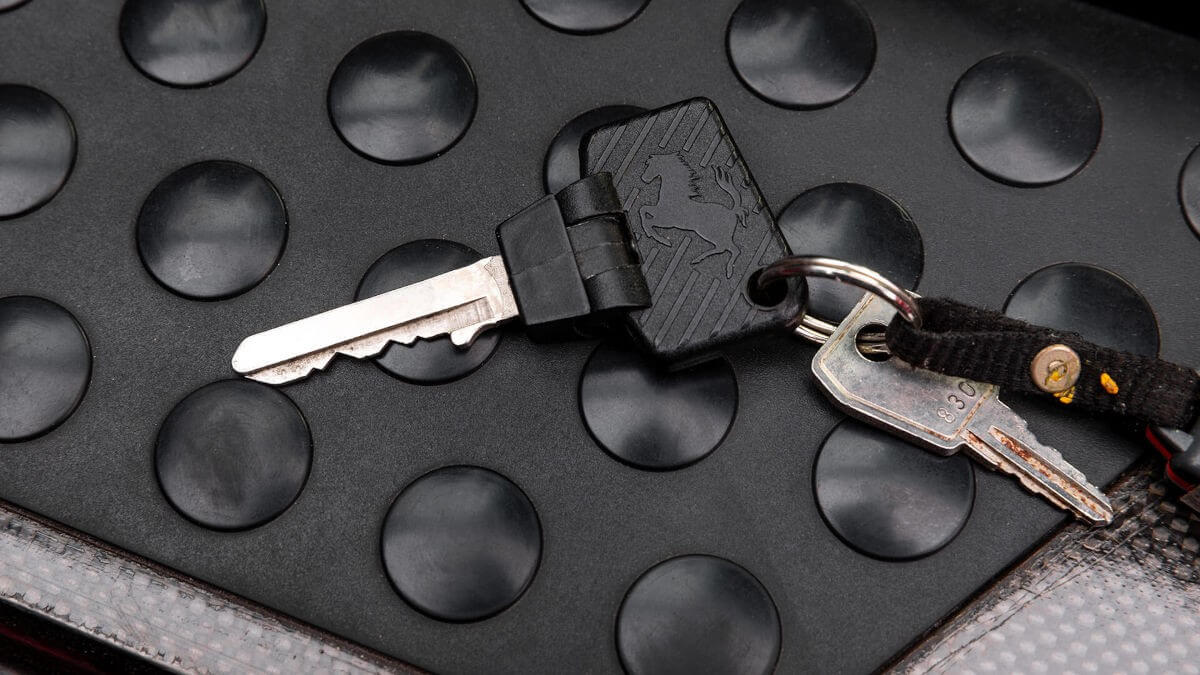 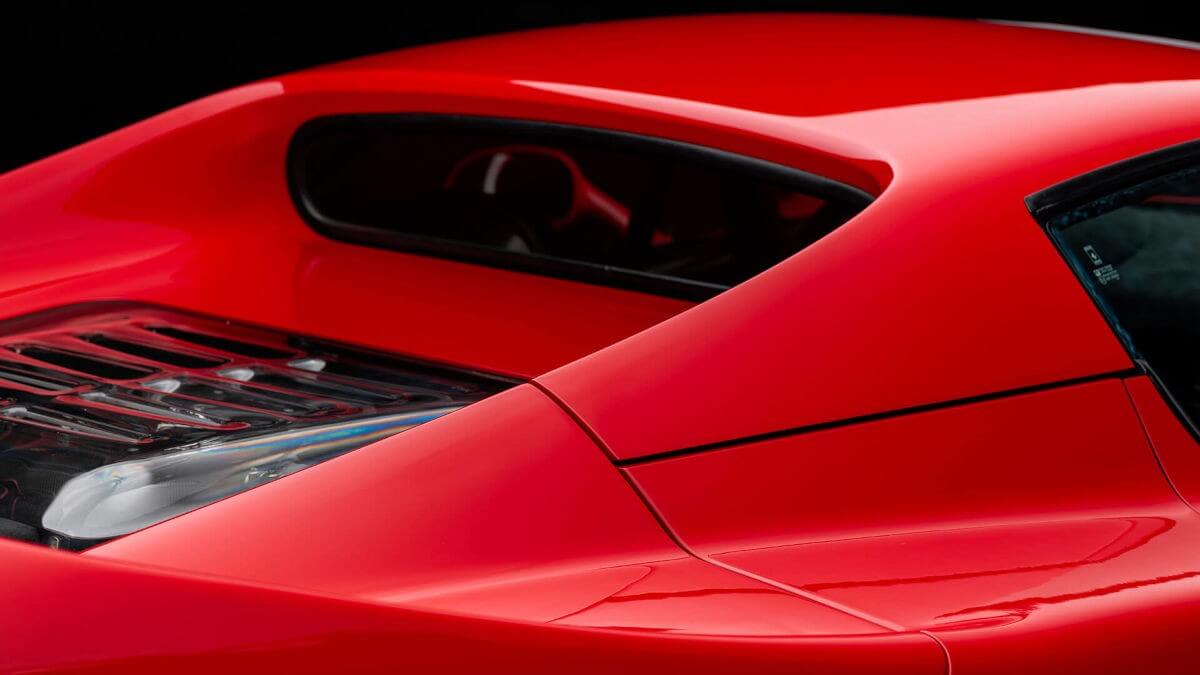 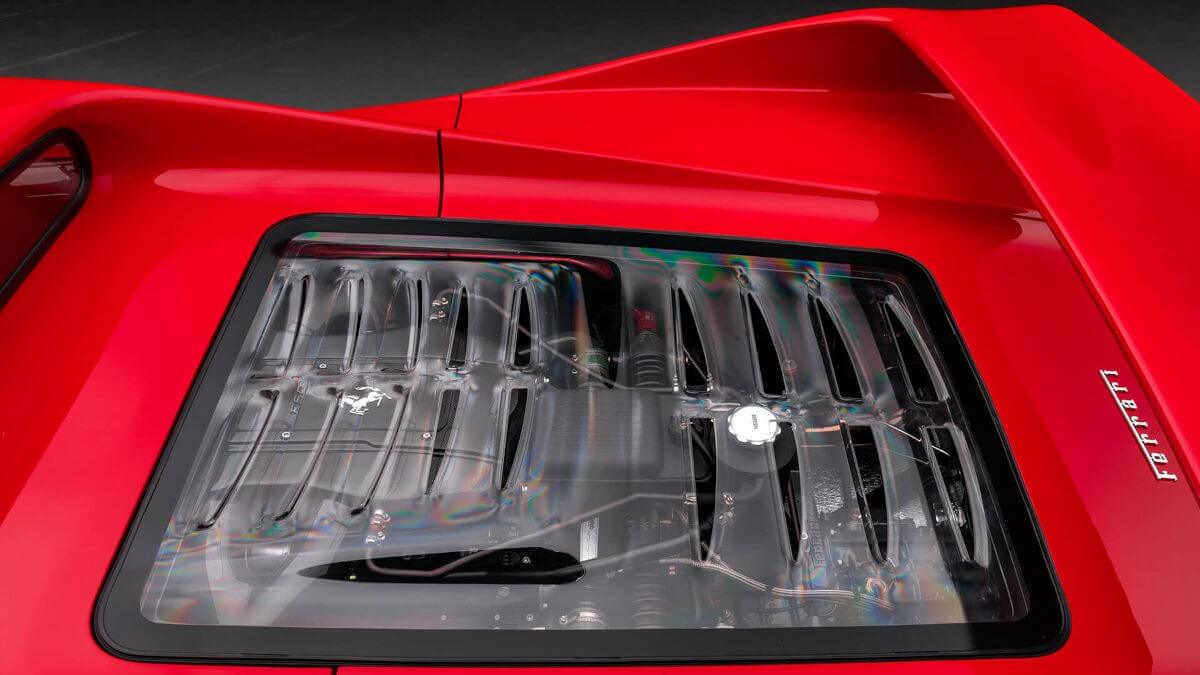 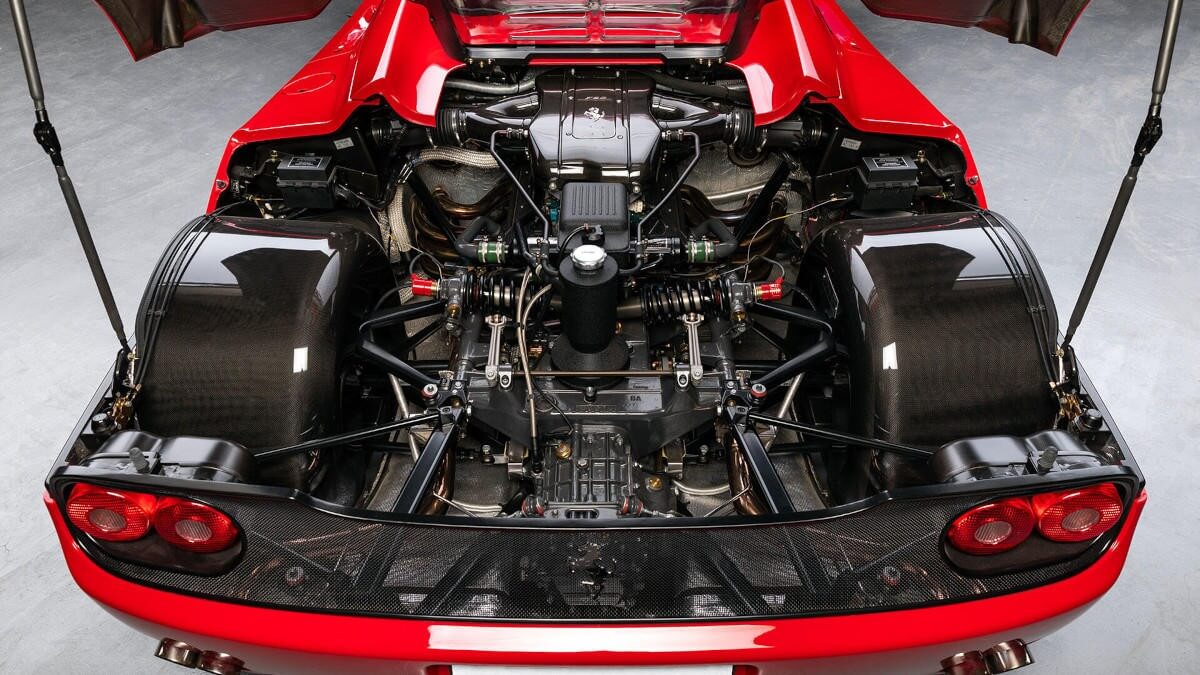 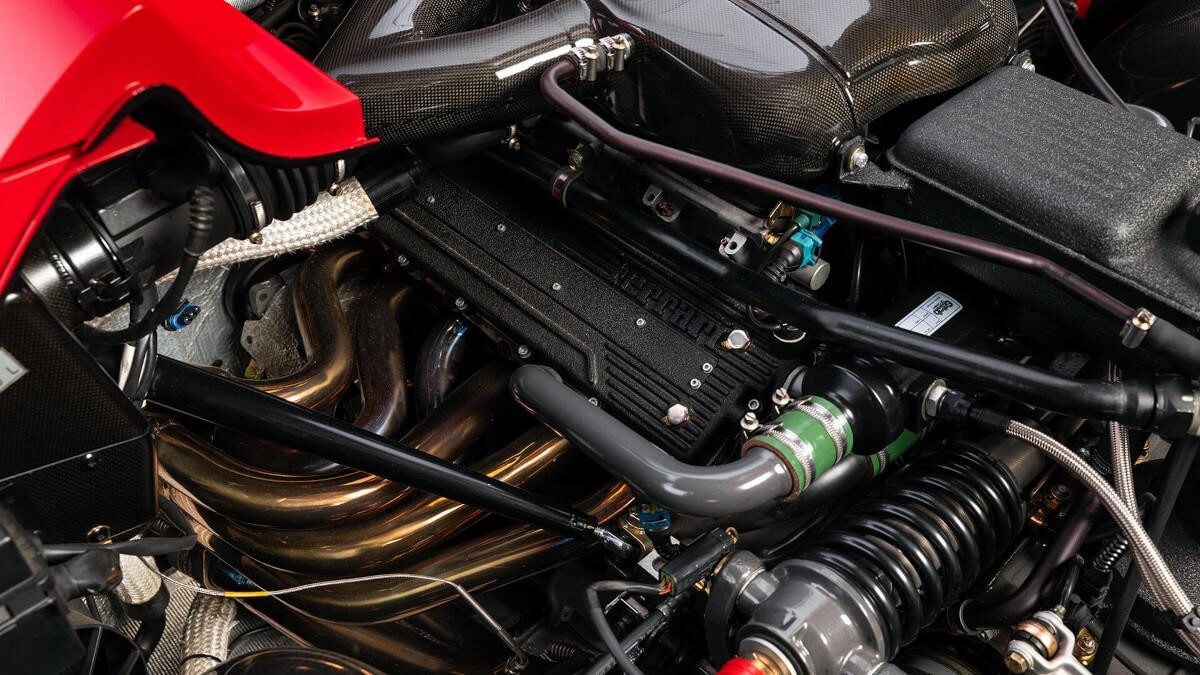 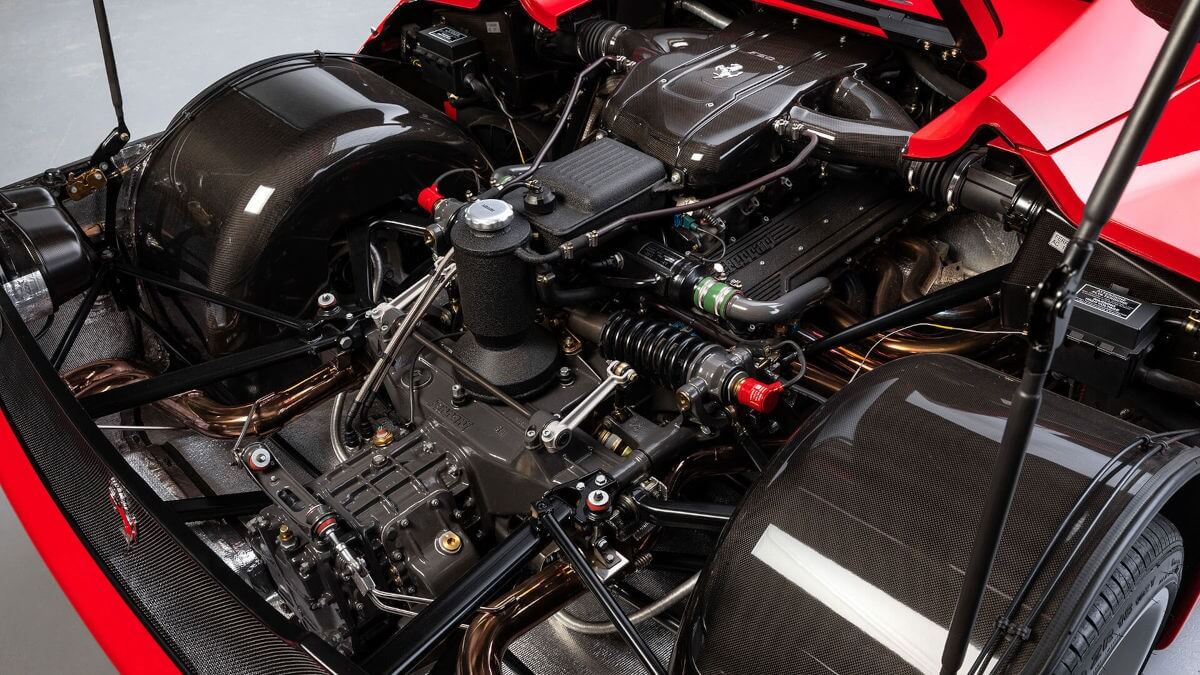 Directly behind the two passengers, Ferrari installed a 4.7-liter V12 engine with 60 valves. Until 1993, the basic block was used to power their Formula 1 racing cars, but with a displacement of only 3.5 liters. For use in this road-legal supercar, the Ferrari engineers not only increased the displacement but also reduced the maximum revs from around 15,000 to 8,700 rpm. Nevertheless, 382 kW/520 hp was still available as maximum power. The maximum torque of 471 newtonmeters was transmitted to the rear wheels via a manual six-speed gearbox. Mahle produced the pistons from light alloy and the connecting rods from titanium. In addition, Brembo delivered ventilated and perforated brake discs, which were mounted behind 18-inch star-shaped wheels made of an aluminium-magnesium alloy with 245/35 ZR 18 tires at the front and 335/30 ZR 18 tires at the rear, either from Goodyear or Bridgestone.

There were only a few RHD F50s

Next to the 349 official customer cars, a handful of pre-production cars and three F50 GT prototypes for the GT1 category of the FIA GT racing series were built. While those three cars never took part in any official race, there were also just a few RHD cars made for the Sultan of Brunei. All other F50s were LHD only. All production cars are numbered on the front left side member. Number 180 of 349 is currently available for sale at Girardo & Co. in their Italian showroom. This car went to its first owner Alberto Alberti in Reggio Emilia via the Modenese Ferrari dealer on August 1, 1996. He kept the car until 2015 and lend it to the Ferrari factory in 2013 for their display at the Auto e Motor d’Epoca in Padua and in the same year also for the Finali Mondiali in Mugello. The second owner had the car certified at Ferrari Classiche in 2017 and in 2019 ordered a comprehensive engine-out service, which cost more than 100,000 €, but also ensured that the F50 looks as new from front to back. Girardo & Co. will only reveal the price of this supercar on request.