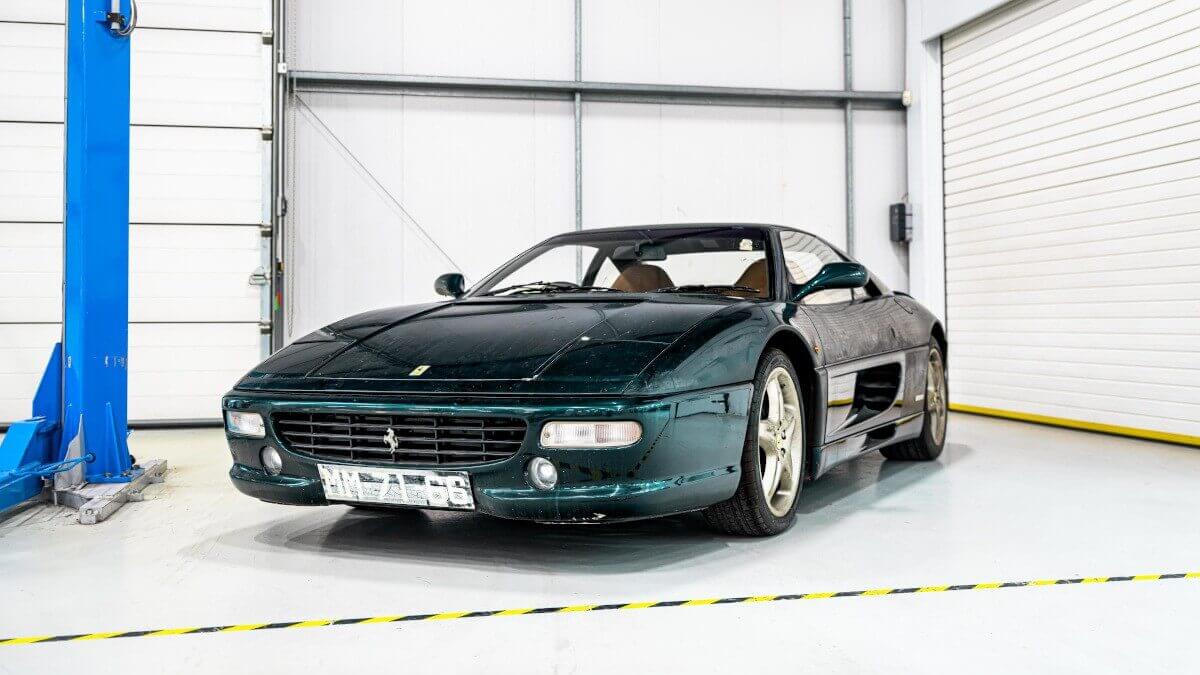 Barnfinds are mainly known from vehicles built before 1980, but if you park a cal long enough in bad conditions, the overall condition of the car will develop more quickly. Thus it is not surprising that recently a customer approached the London Ferrari dealer H.R. Owen with the request to make an F355 Berlinetta drivable again. This sports car stood in a garage in Macao for a full 12 years, only covered by a sheet of cloth. Actually the customer was looking for a beautiful Ferrari 512 TR, but this F355 was parked right next to it and so he bought it as well. It only has a mileage of about 10,000 kilometers, which were all covered between the first registration in July 1995 and the beginning of the storage in 2007. Why exactly the car was parked for so long is not known.

In the time of 12 years, in which the Ferrari was parked unattended, some rodents tried to chew through the wiring harness. At the same time some important operating fluids dried out and corrosion gnawed at some components. For this reason, the team at the Ferrari Service Centre in West London, the largest Ferrari service centre in Europe, first took a close look at the condition of this car. They then removed the V8 engine, disassembled and cleaned it down to the deepest levels and replaced various key components such as defective pumps, the clutch, the flywheel and the gnawed wiring harness including fuses. The fuel line system including tanks and pumps was also reworked. A brand-new exhaust system with catalytic converters and corresponding control modules was installed in the vehicle as well as a new battery. A new air conditioning system as well as new rims, tyres, brakes and suspension components complete the efforts of H.R. Owen on this car so far. 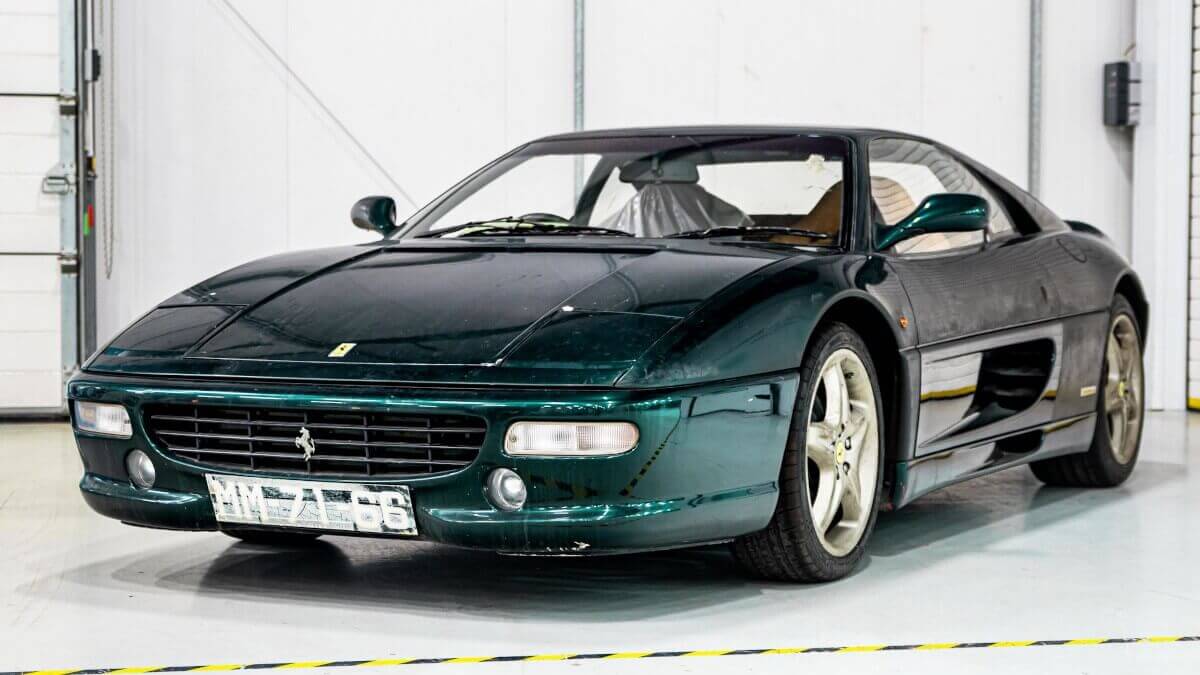 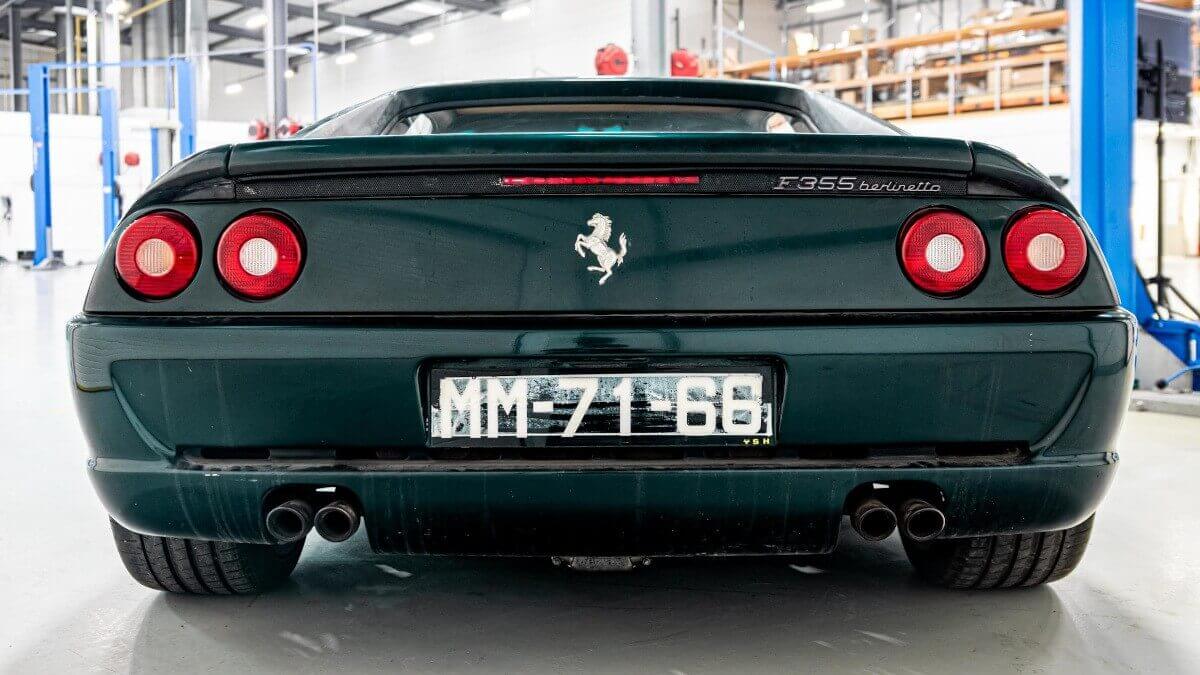 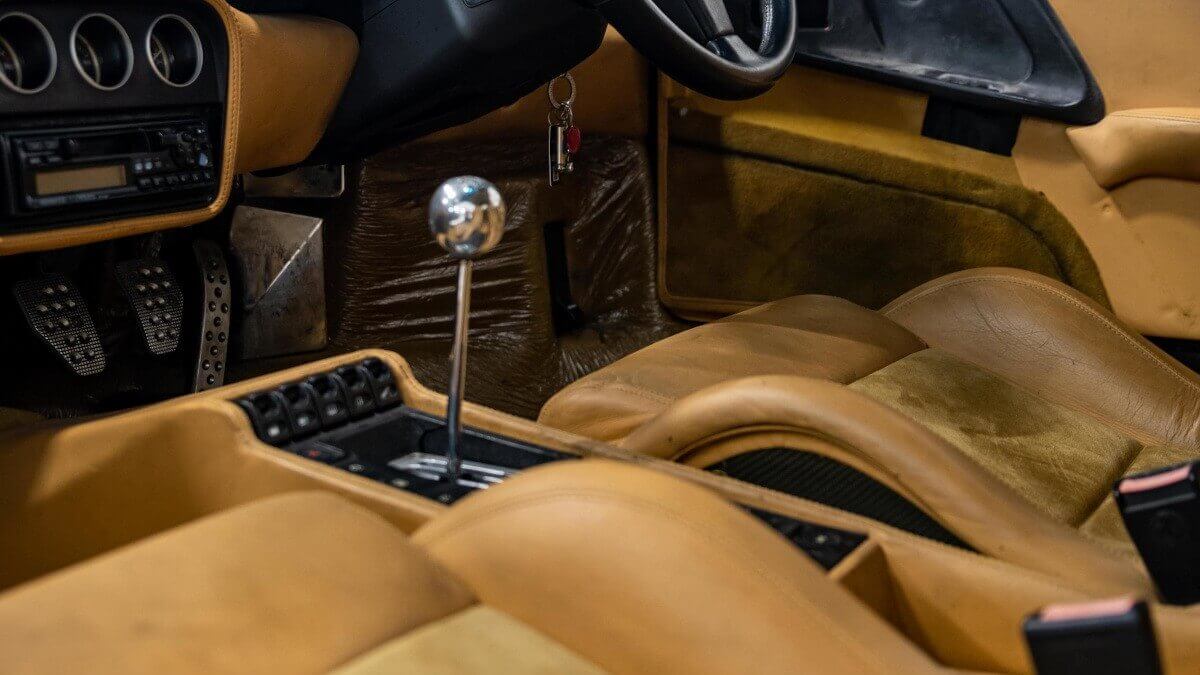 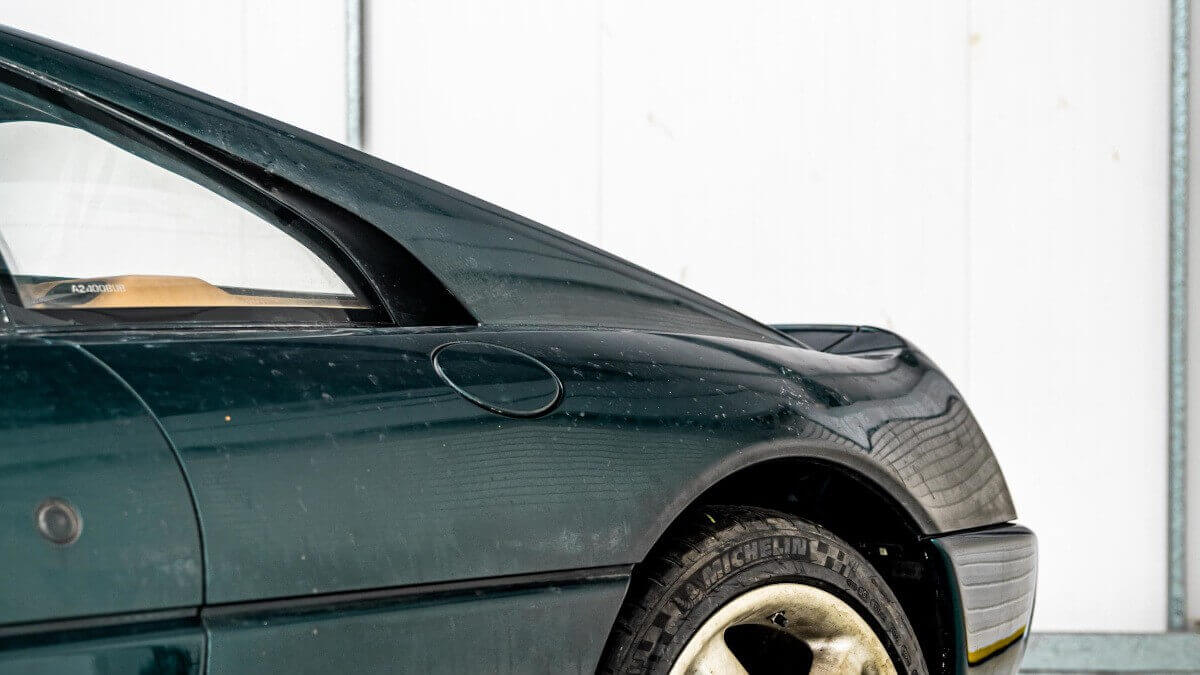 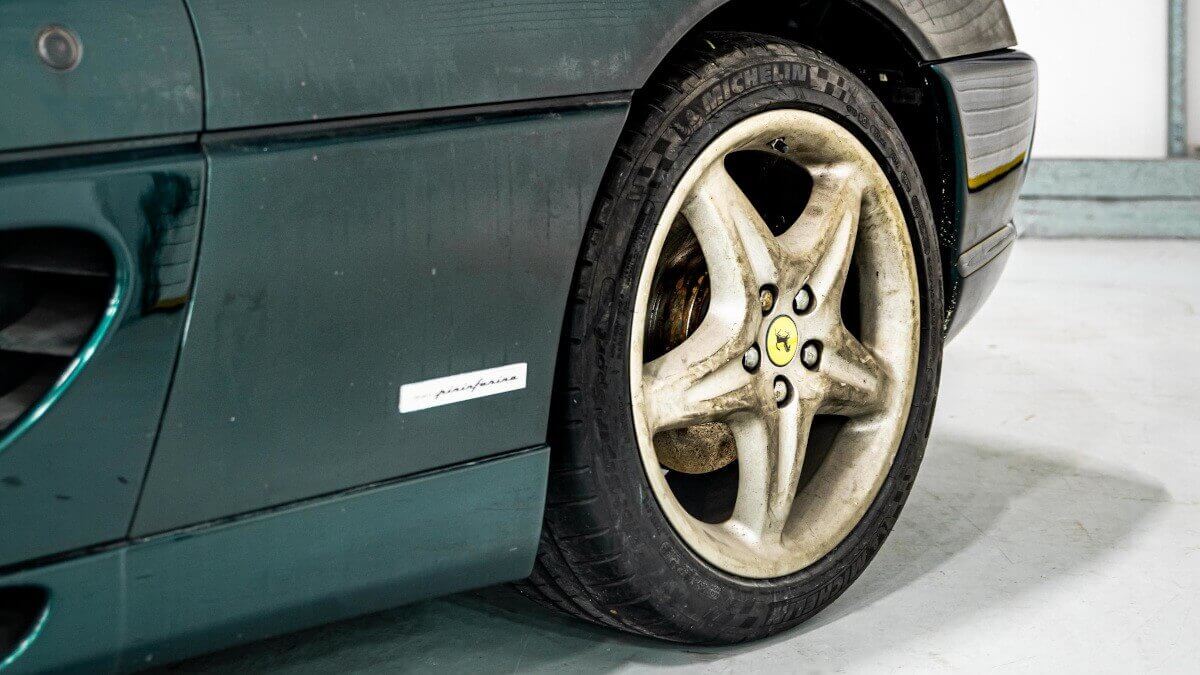 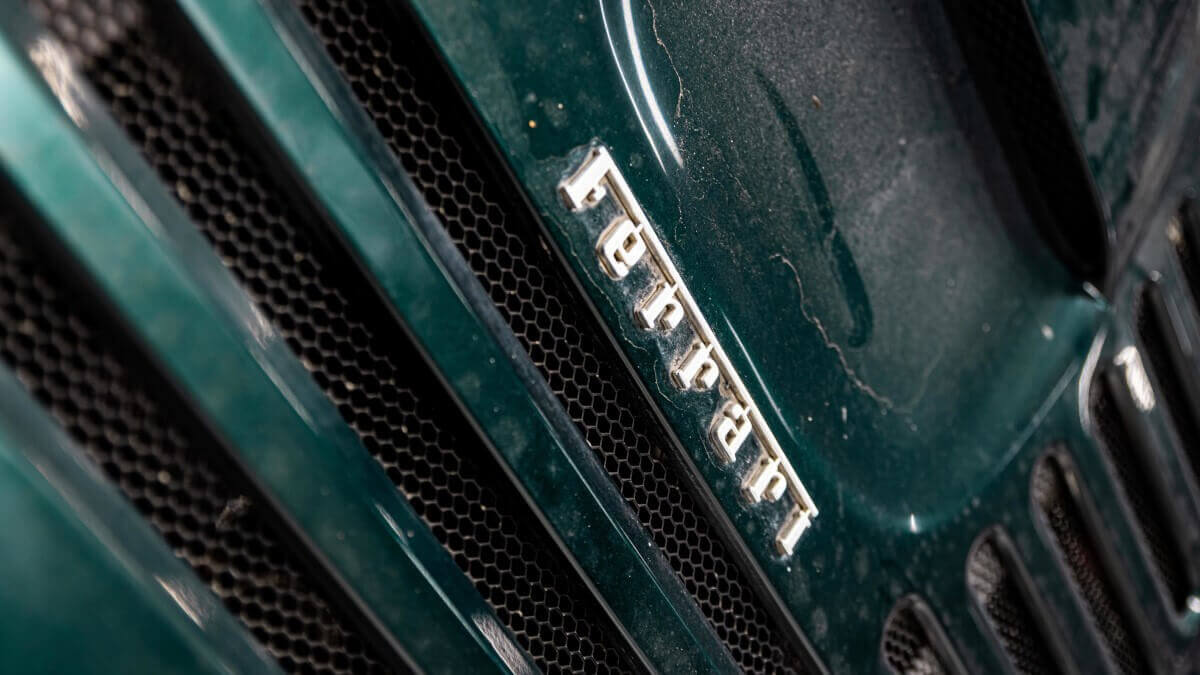 On the pictures you can see in our gallery, this Ferrari F355 Berlinetta is shown in the condition when it arrived in London last year. It is already obvious why the new owner has put so much effort into this car. The sports car has the rare Verde Silverstone (dark green) paint scheme, beige leather, carbon sports seats and the coveted six-speed manual gearbox with the open metal gear shifting gate. Over the next few weeks, the car will be repainted in its original color, the interior will be refurbished and then certified according to the principles of Ferrari Classiche.

Between 1994 and 1999, over 11,200 units of the F355 were built in two model generations. Behind the passengers always sat a naturally aspirated 3.5-liter V8 engine with 280 kW/381 hp. Initially, two Bosch 2.7 engine control units operated in the vehicle, but in 1996 the company switched to a single Bosch 5.2 unit. In addition to the manual transmission, for the first time in the brand’s history there was an optional sequential six-speed transmission with shift paddles behind the steering wheel, which was given the designation F1 to promote sales.