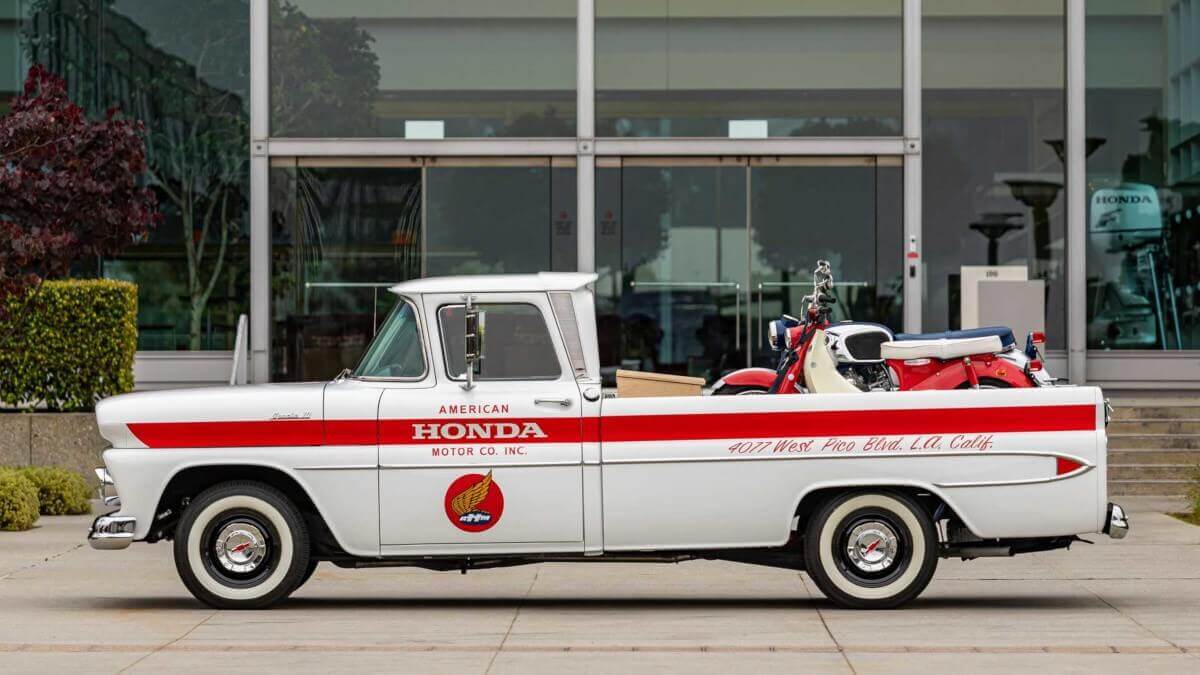 Sometimes coincidences write the best stories. One of these coincidences led a few employees of American Honda Motor Co. Inc. (AHM) into the showroom of a Chevrolet dealer in the early 1960s. There they ordered a fleet of Apache C10 pickups. What may seem strange from today’s point of view, was then essential for the still small Japanese brand Honda to deliver their latest motorcycles and scooters in Southern California. At Chevrolet they might not have guessed that with these small fleet of commercial vehicles they helped to support a competitor, which years later torpedoed the sale figures of the American car industry. AHM opened its first US office in 1959 at 4077 Pico Blvd., Los Angeles. In 1961, a b/w picture with one of the Chevrolets was shot right in front of it.

Today, probably none of the vehicles from Honda’s fleet exist anymore. Nevertheless, the Japanese manufacturer wanted to present such a pickup again on the occasion of their 60th anniversary in the USA. They set out to find a suitable restoration object and finally found one. To make the equipment and paint as authentic as possible, they dug up old pictures from their US archive and also talked to early employees. The painted logos and letterings were used by company salesmen delivering motorcycles to dealers to sell on a consignment basis. Already in 1965 Honda became the best-selling motorcycle brand in the US with a market share of almost 72 percent. 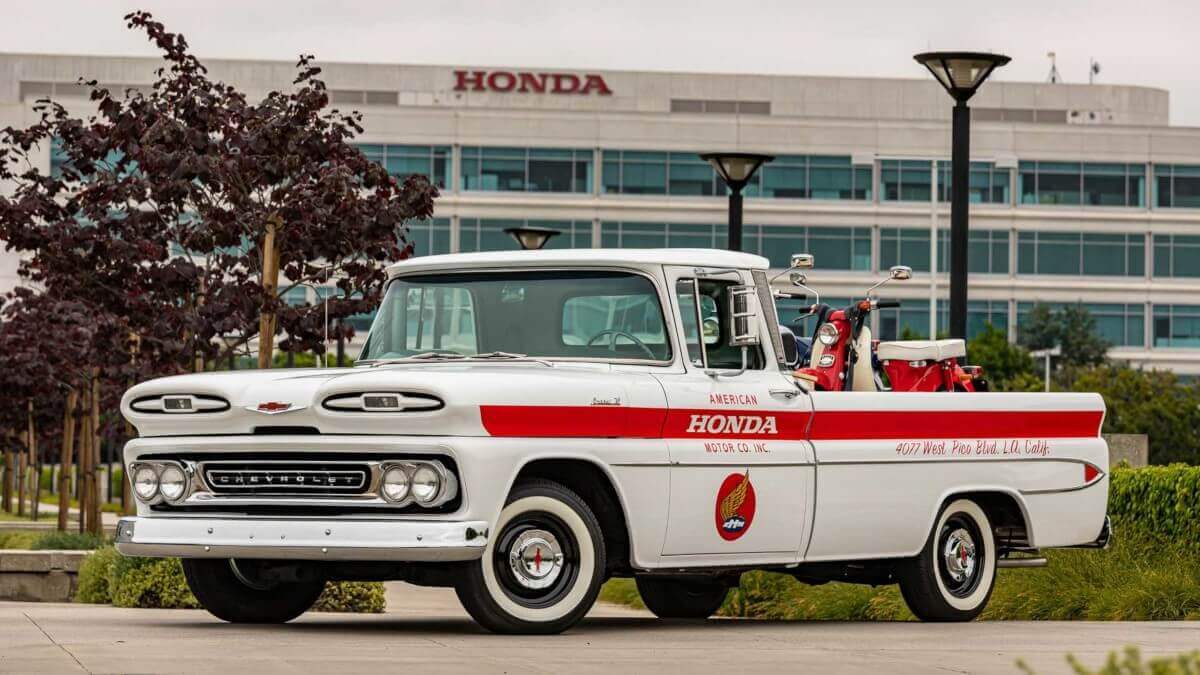 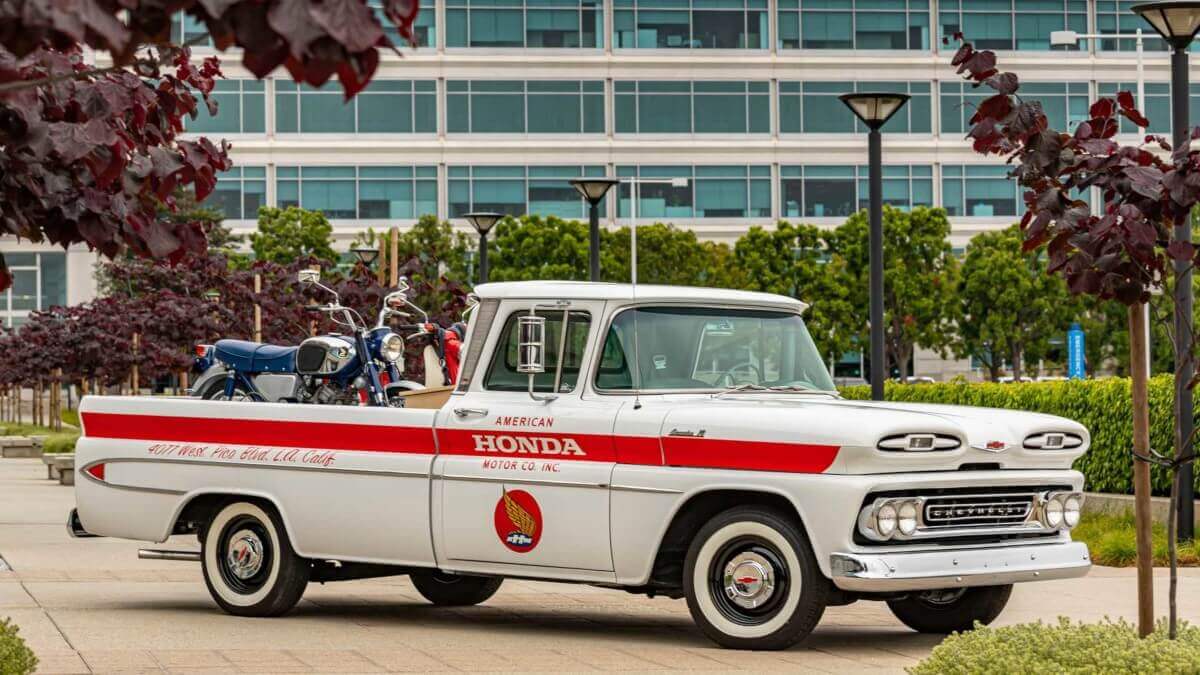 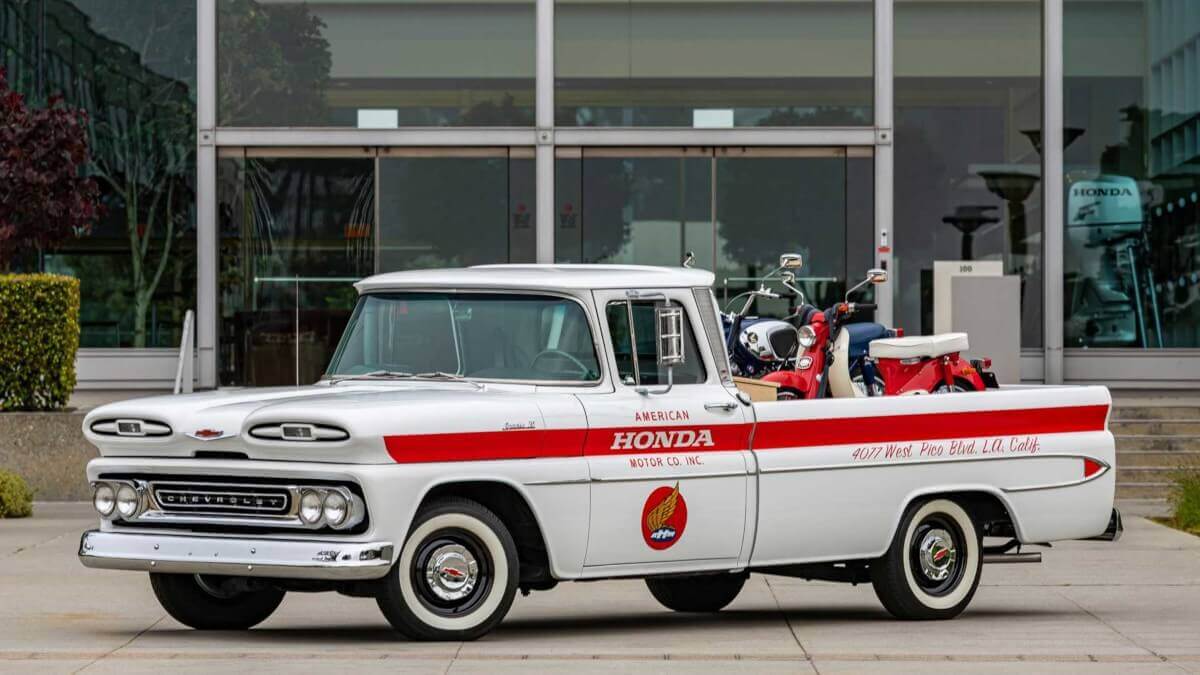 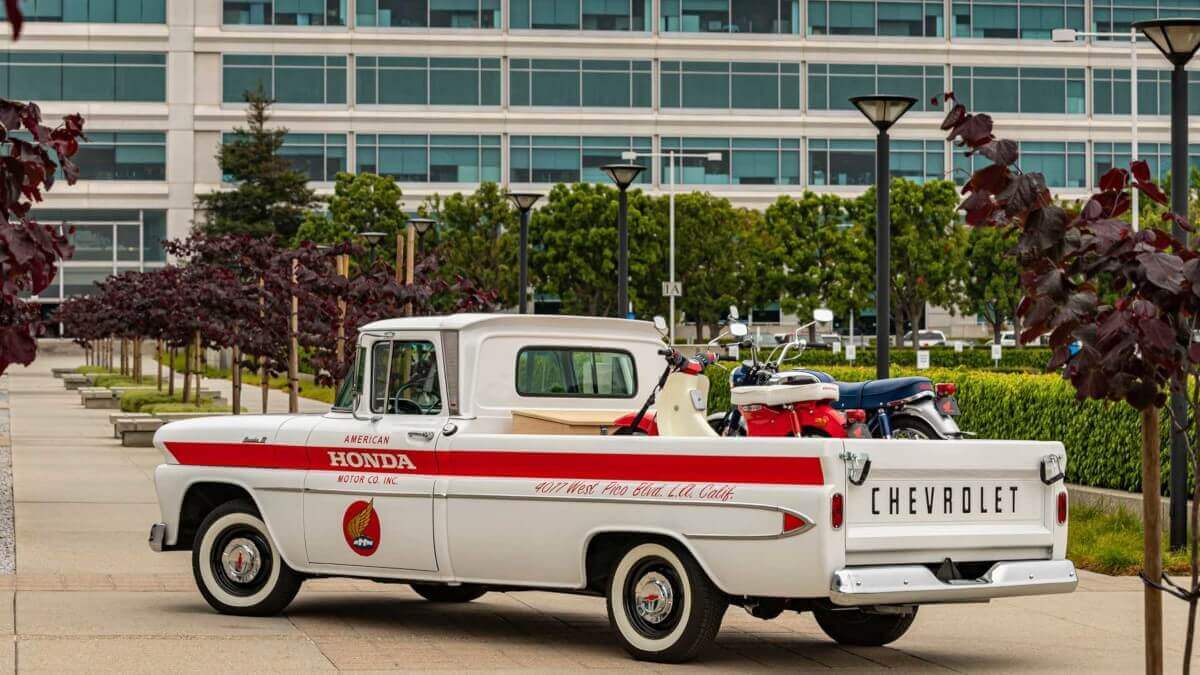 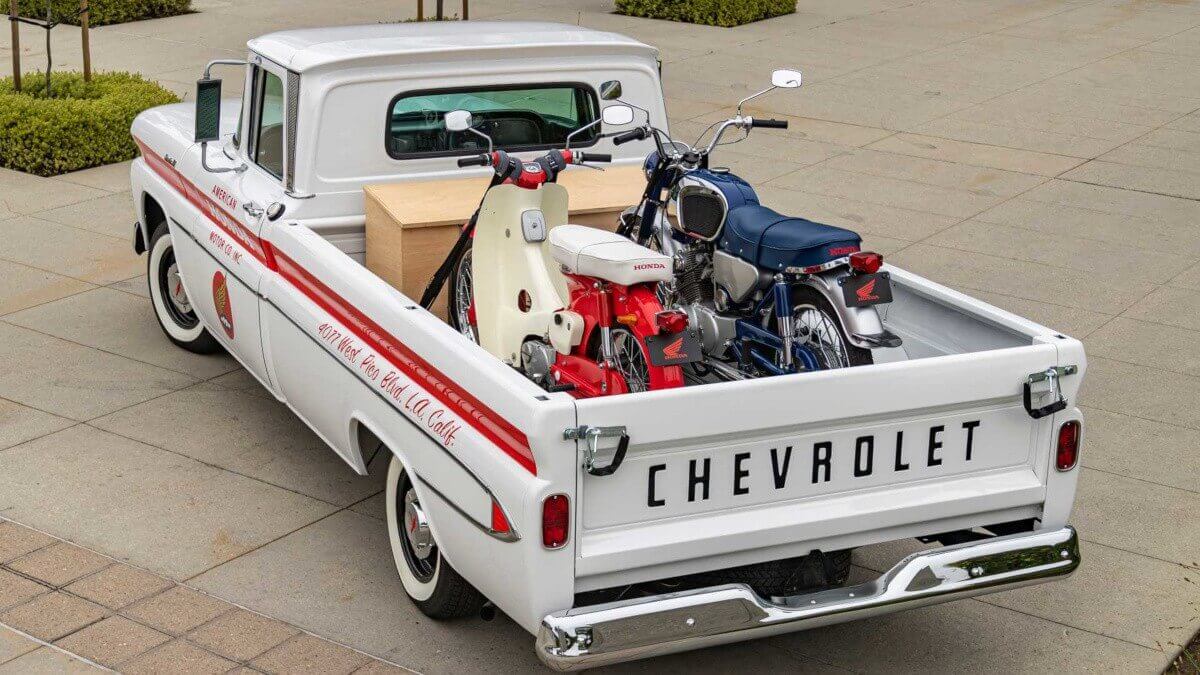 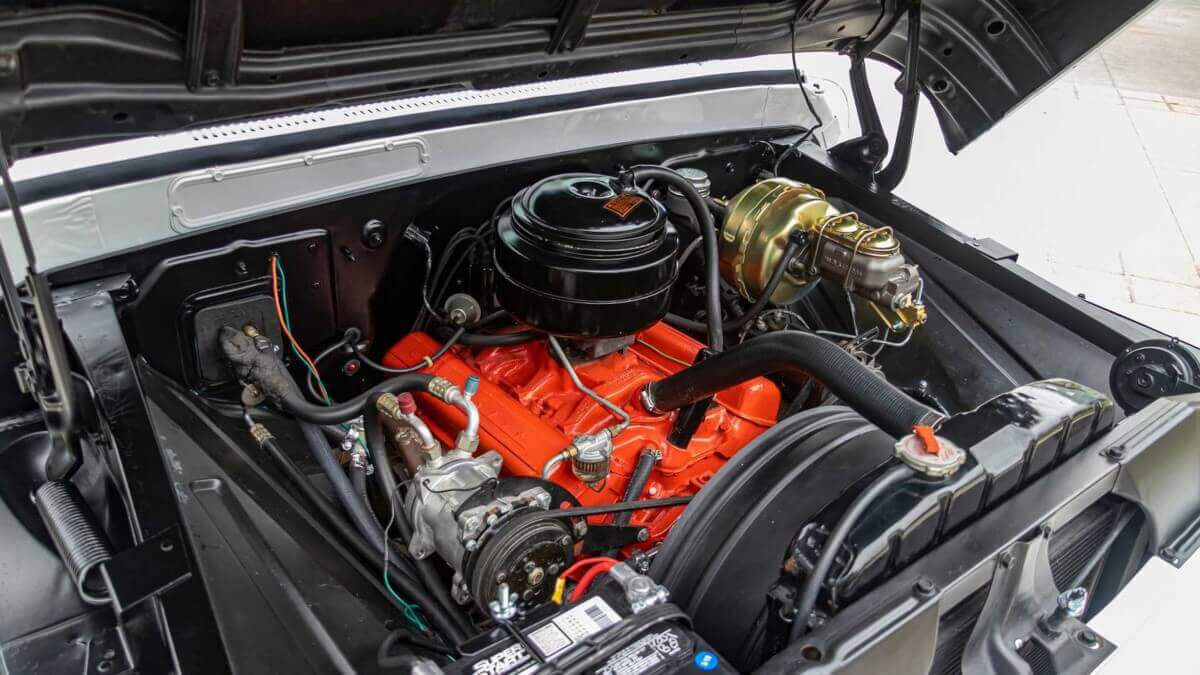 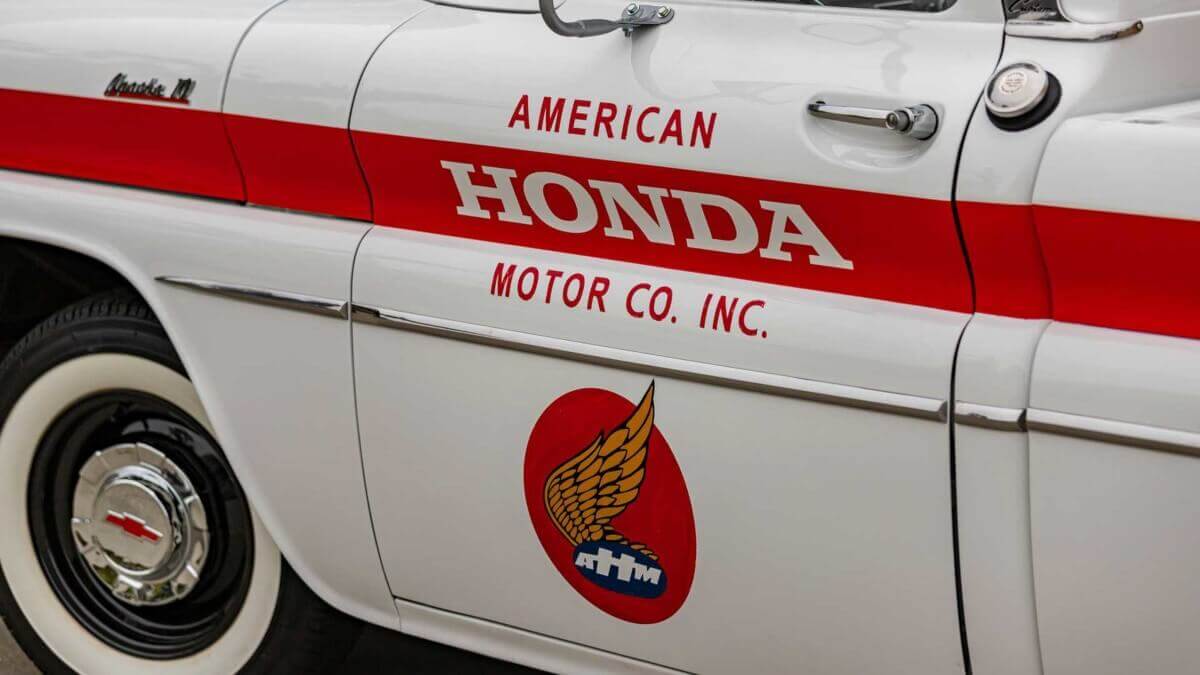 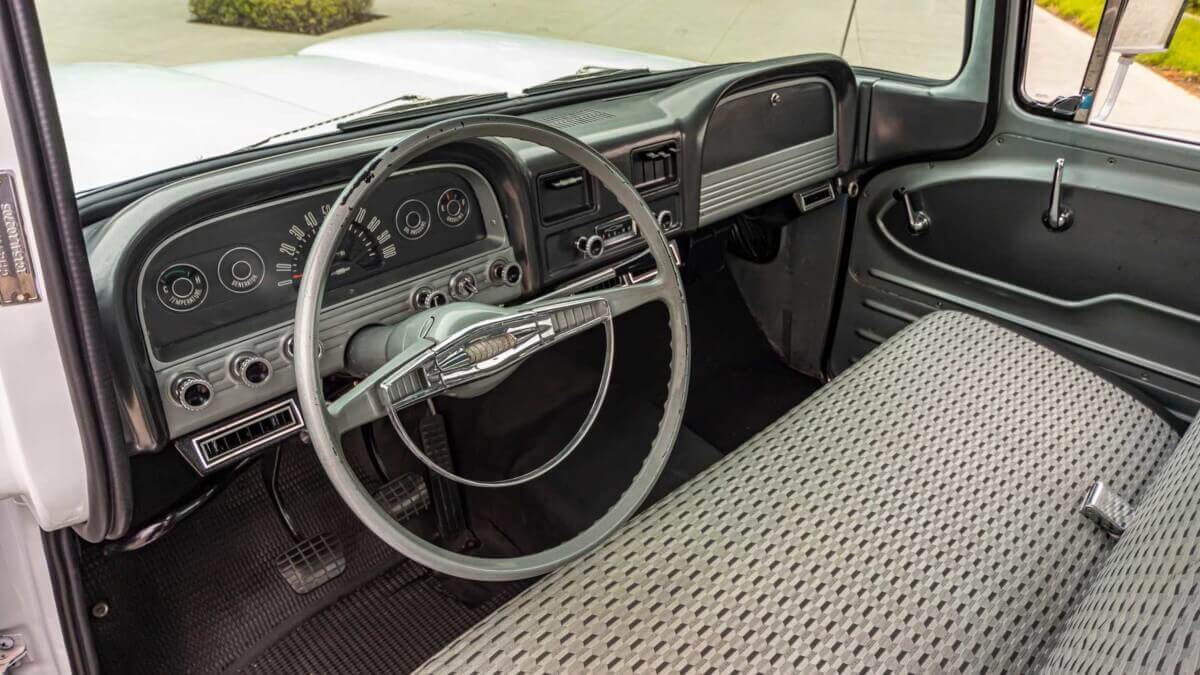 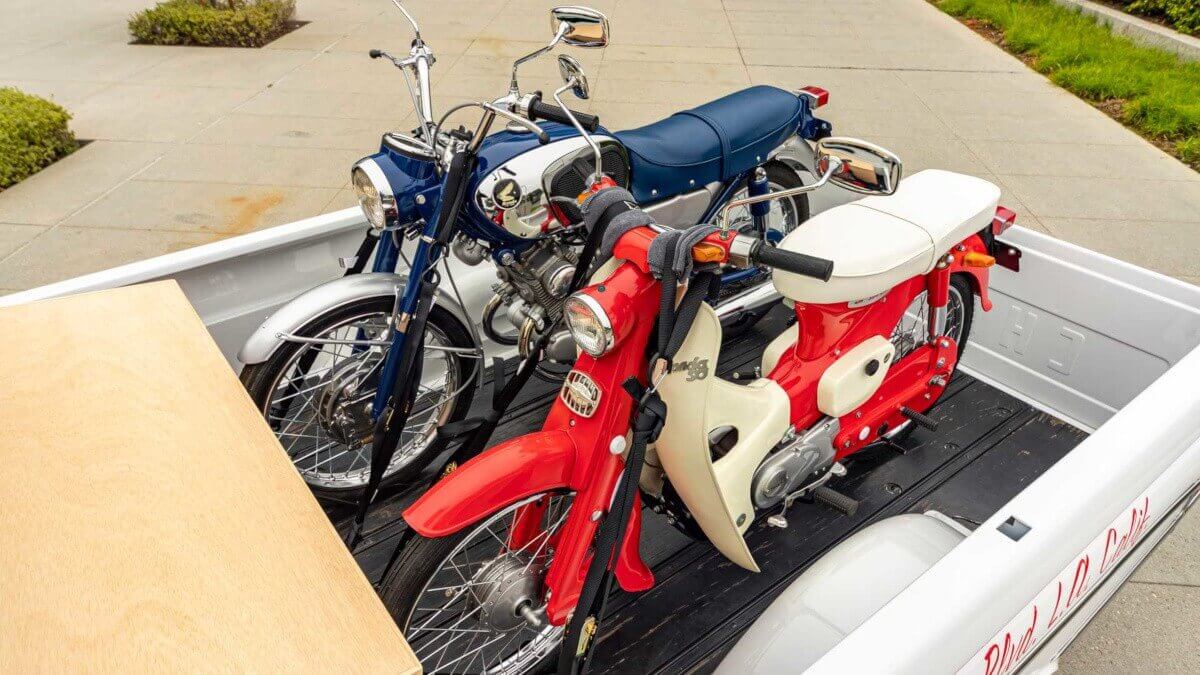 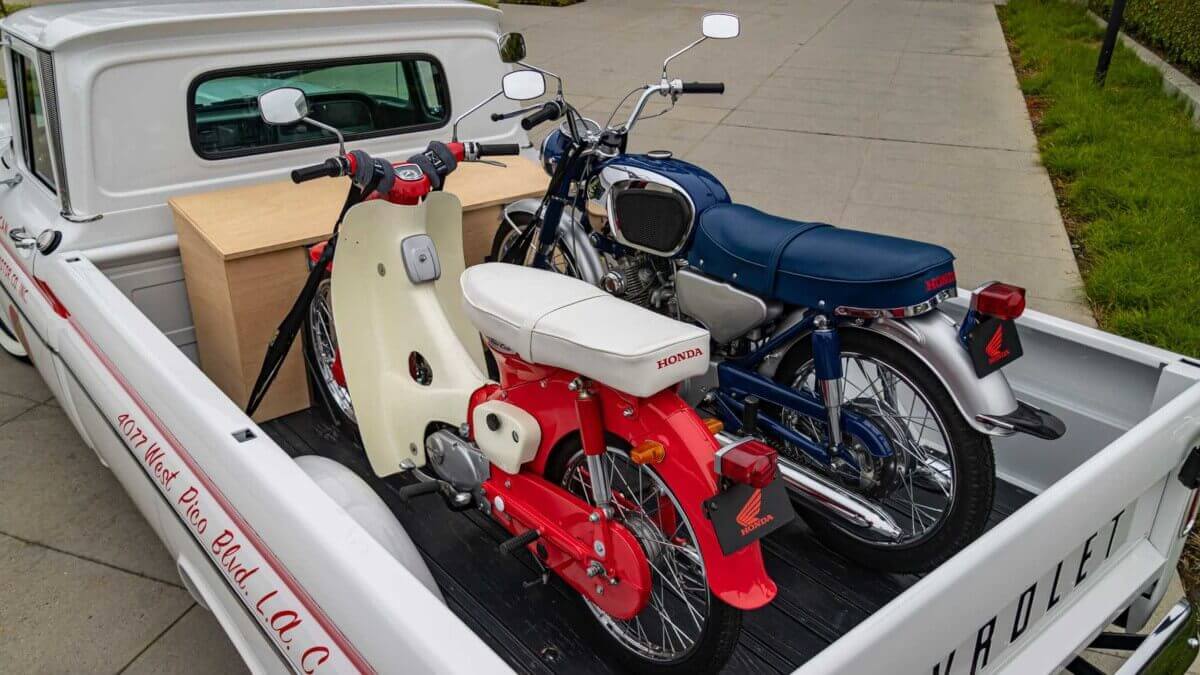 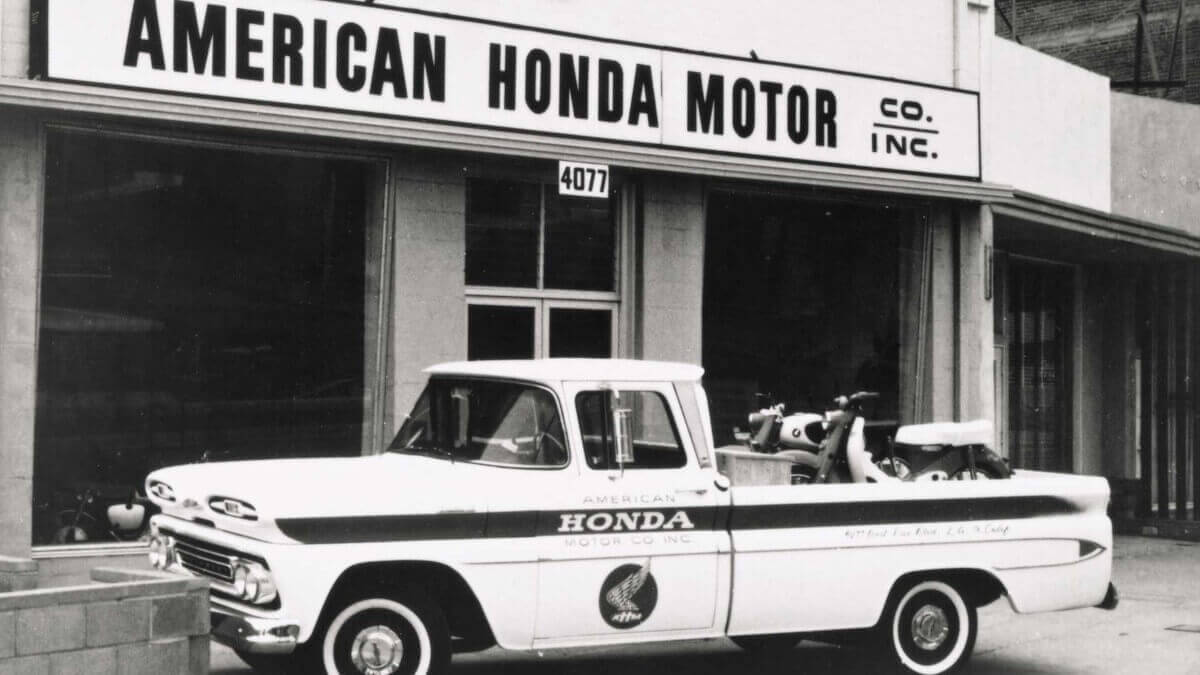 The restored vehicle received a technical refurbishment and new white paint with hand-painted logos like the fleet-cars had back in the days. In addition, two time-typical two-wheelers were placed on the flatbed of the truck for the celebrations of 60 years of Honda in the United States: A Honda 50 and a Honda CB160. In the near future, the newly completed pickup will decorate the entrance area of the Honda USA headquarters in Torrance/California. In addition, Honda wants to show the vehicle at classic car events in Southern California, at other nationwide events and at the SEMA in Las Vegas. The car is then allowed to enter the American Honda Collection Hall in Torrance, where it will be exhibited in front of a replica of the first office in Los Angeles.

From the Apache C10 half-ton truck Chevrolet produced several thousand copies. Under the bonnet of the Honda vehicle sits a V8 engine with 283 cubic inch of displacement (about 4.6 liters) and about 160 hp. This power reaches the rear axle via a manual three-speed gearbox. The red Honda 50 on the truck bed has a 49 cc pushrod single cylinder engine and a semi-automatic three-speed gearbox with centrifugal clutch. Next to this scooter is one of the first sports motorcycles with small displacement in the brand history. The CB160 gets 16.5 hp from 161 cc and two cylinders. In addition to a manual four-speed transmission, this bicycle also has an electric starter and a tubular steel frame instead of a pressed steel monocoque.