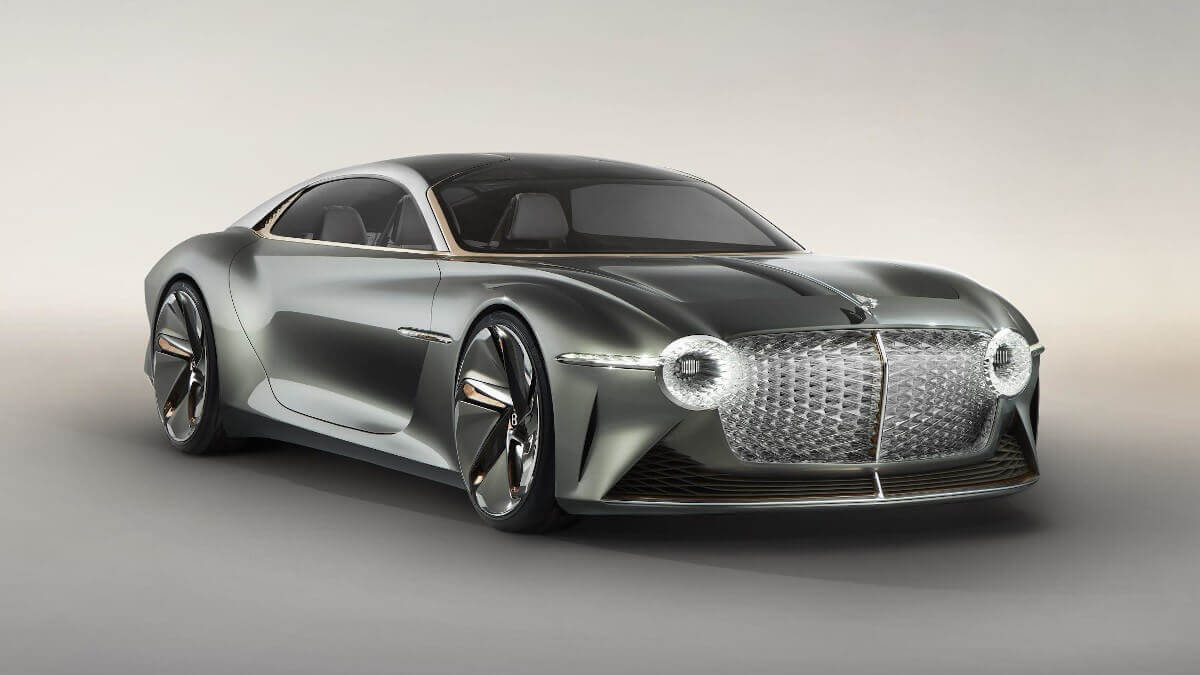 To celebrate the 100th anniversary of the brand, Bentley has already shown the three special edition models Mulsanne W.O. Edition, Continental GT Number 9 Edition and Continental GT Convertible Number 1 Edition in recent months. At the company headquarters, an exclusive look into the future of the brand in the form of the concept car EXP 100 GT was presented. Bentley sees the coming years in the luxury segment under the auspices of electromobility and autonomous driving cars. The new concept car, however, still offers the possibility to drive yourself. It extends to 5.8 meters in length with a design that is a bit reminiscent of the legendary R-Type Continental and consists of aluminium and carbon fiber.

Artificial Intelligence (AI) is used in the interior to make the car a creative, experiential place where you can experience extraordinary human emotions. To do this, a ‘feeling’ light sits centrally in the dashboard, while the operation of the private ‘Personal Assistant’ works both through speech and through gestures. For example, a child in the backseat may look out of the panoramic roof of the car and then point to the clouds with its hands. The AI recognizes this and delivers an explanation of the things that are visible outside. So far so good. However, the author of these lines is faced with the serious question of how to even approach these emotions in a self-driving electric car. Experiencing a winding mountain route, for example in the Alps, behind the wheel of a high-performance car, alway enjoying the great all-round view – these are true emotions in a car. Just climbing in and rolling along can also be done in a bus or on the train, but has rather little to do with feelings and emotions. If you don’t enjoy driving yourself, you might want to think about calling a taxi or Uber – of, if you have enough money for a Bentley, to hire a chauffeur. And if, as a parent, you are no longer able to explain the environment to your child and interact with him or her, you shouldn’t even have a baby in the first place. 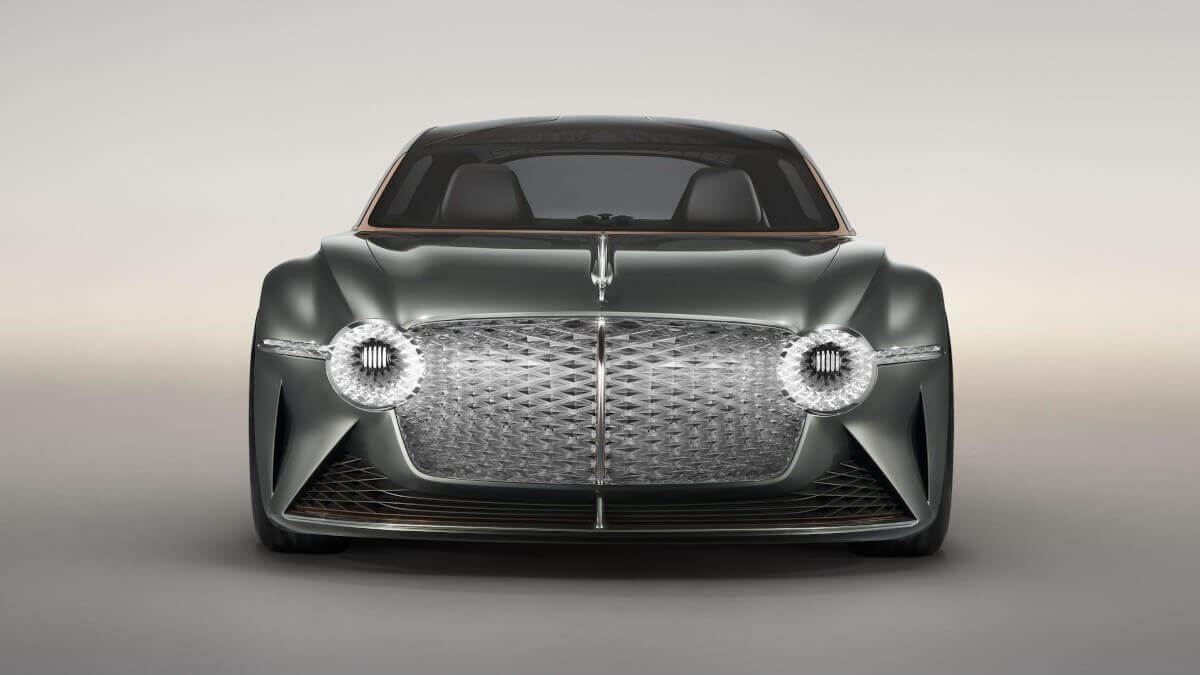 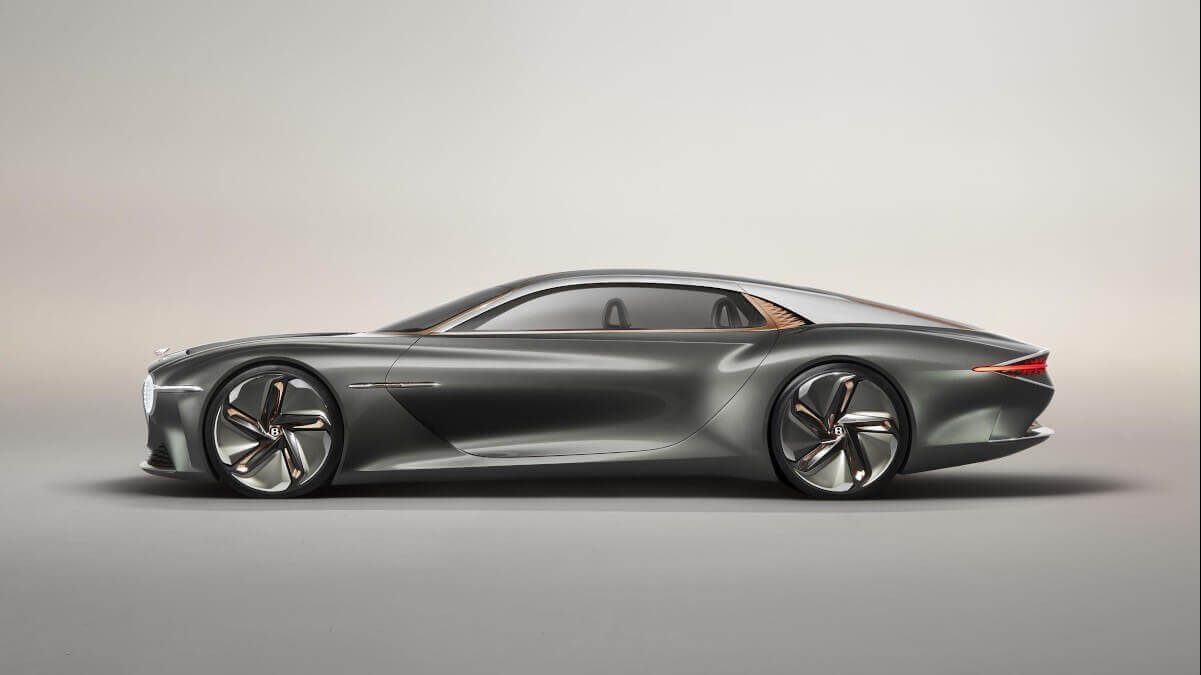 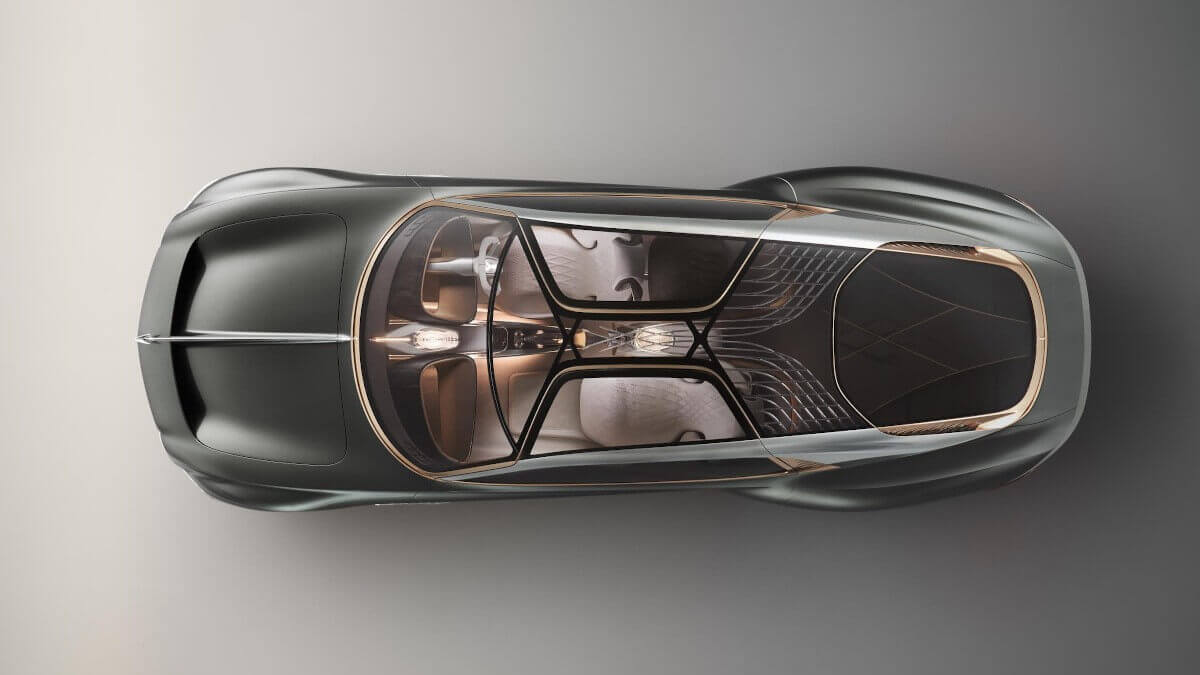 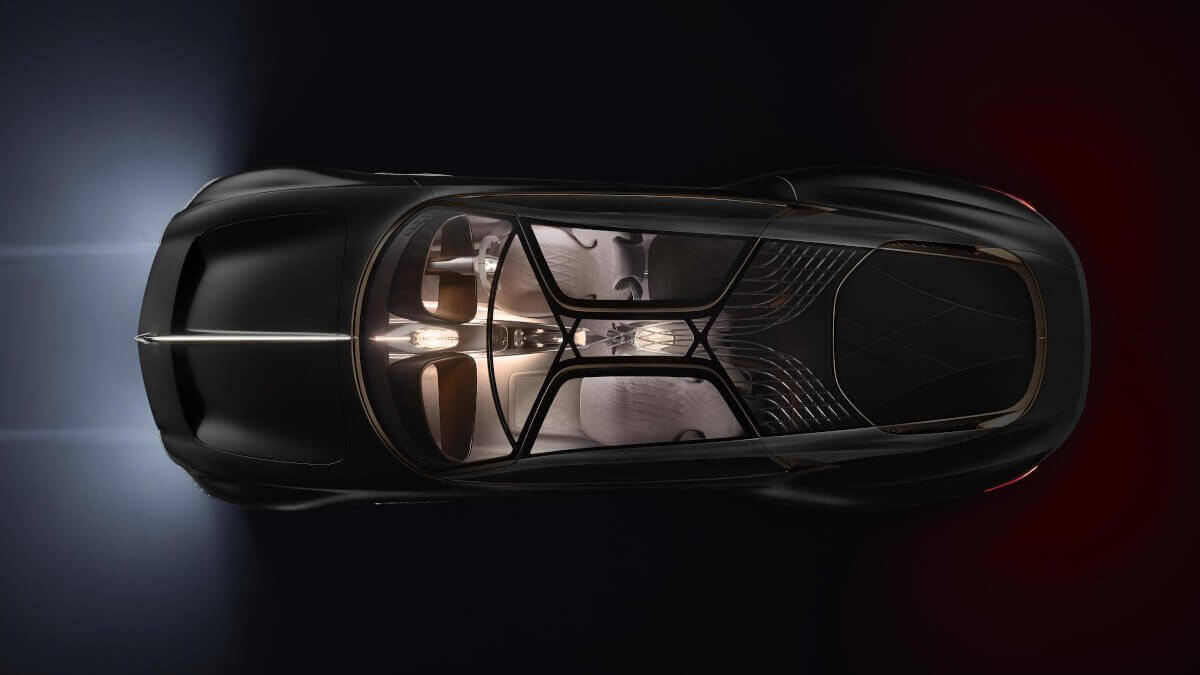 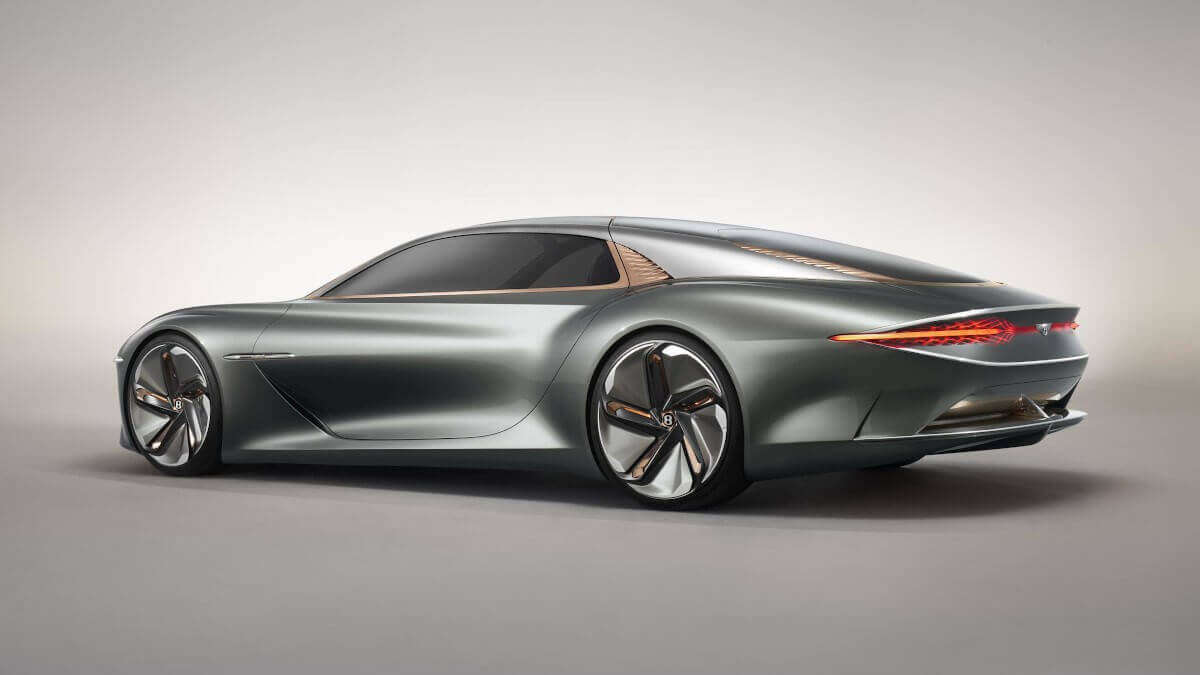 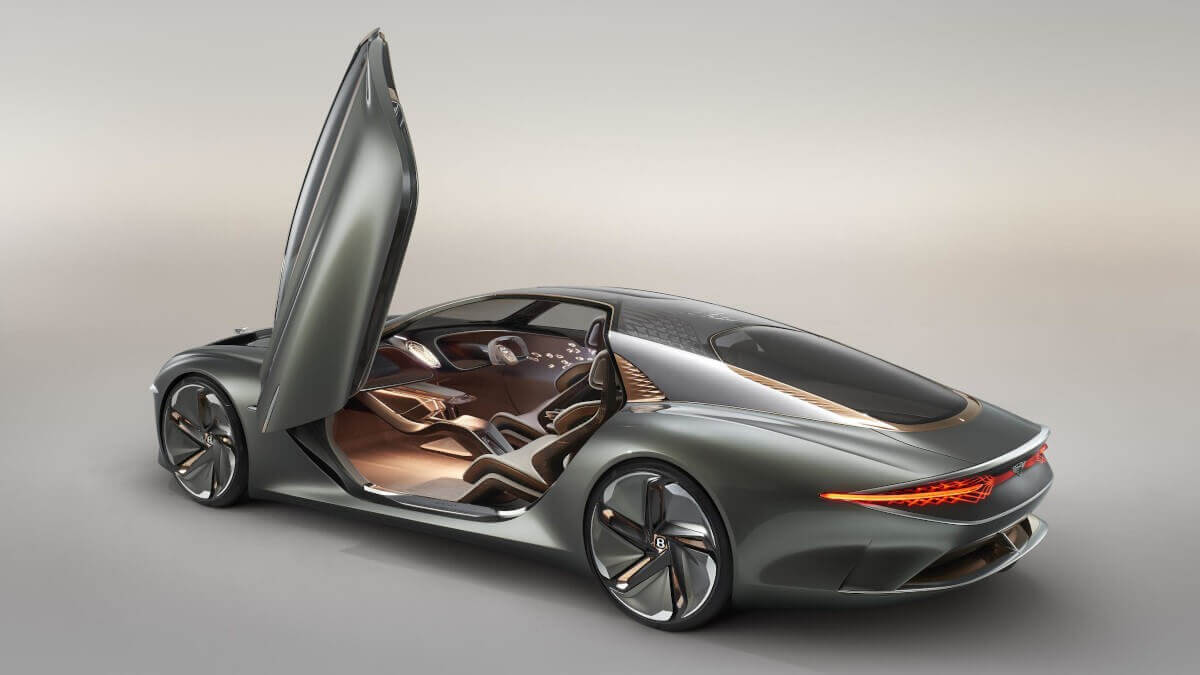 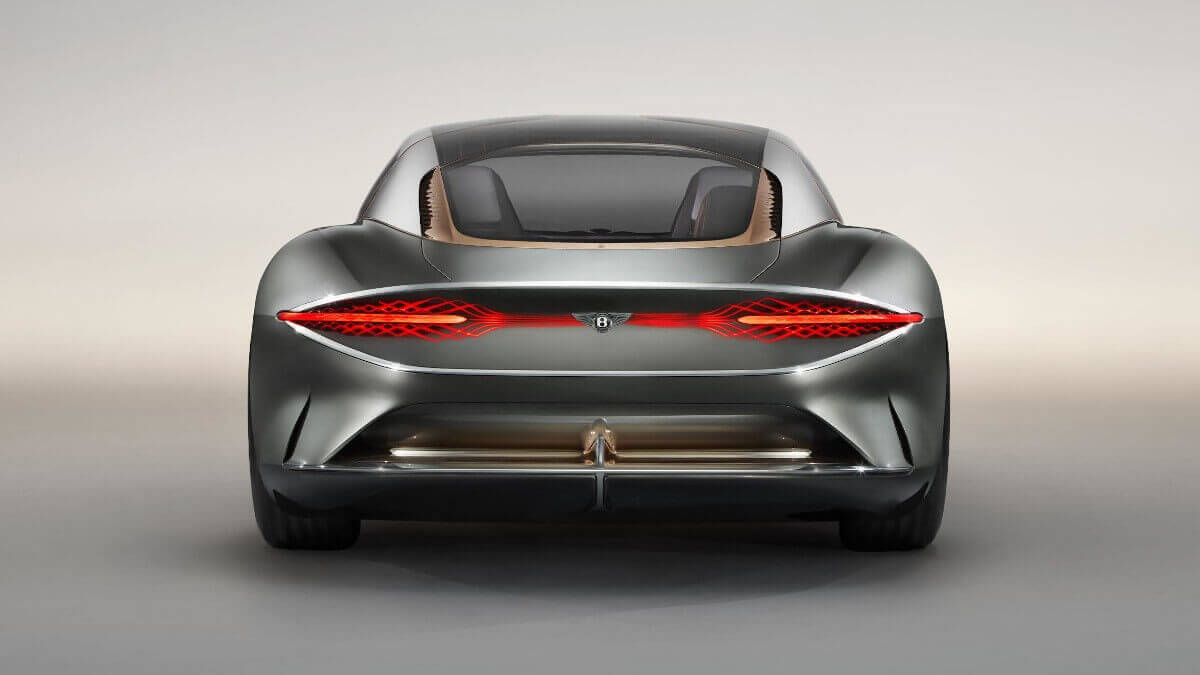 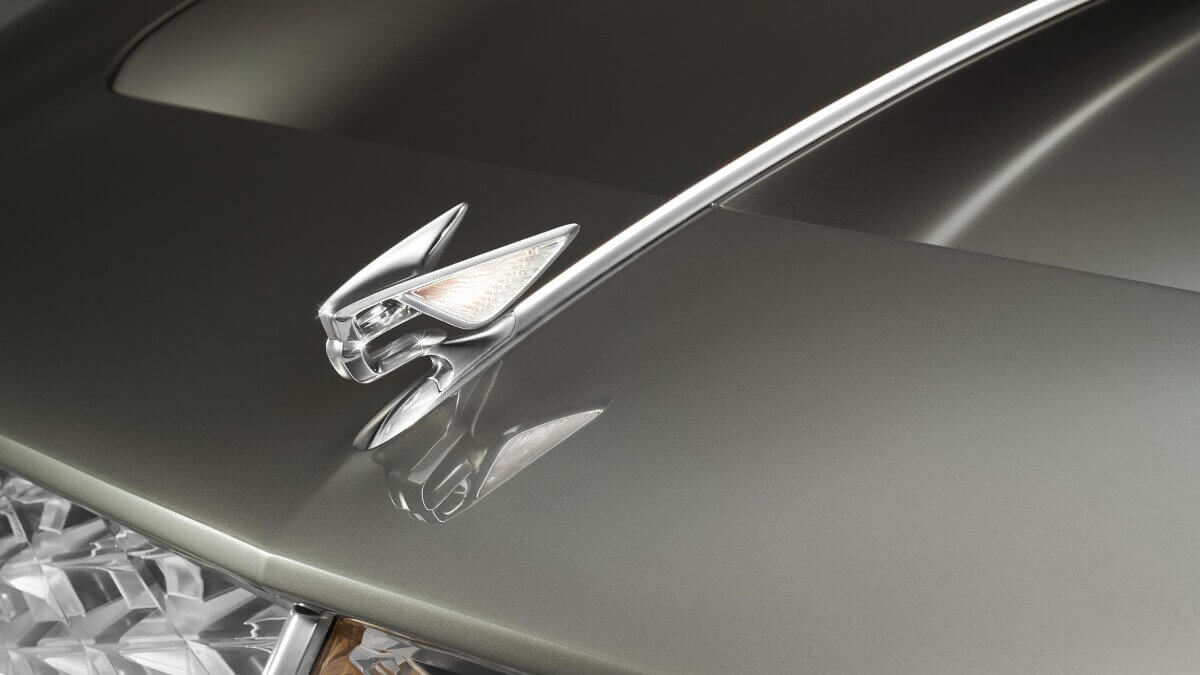 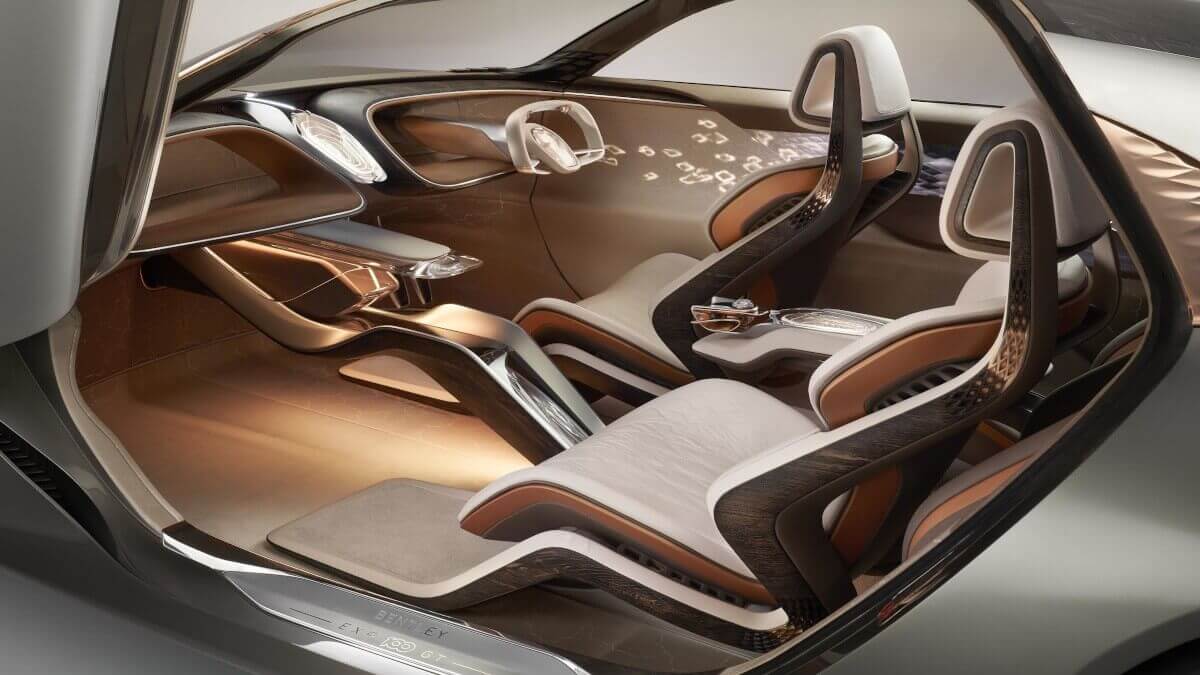 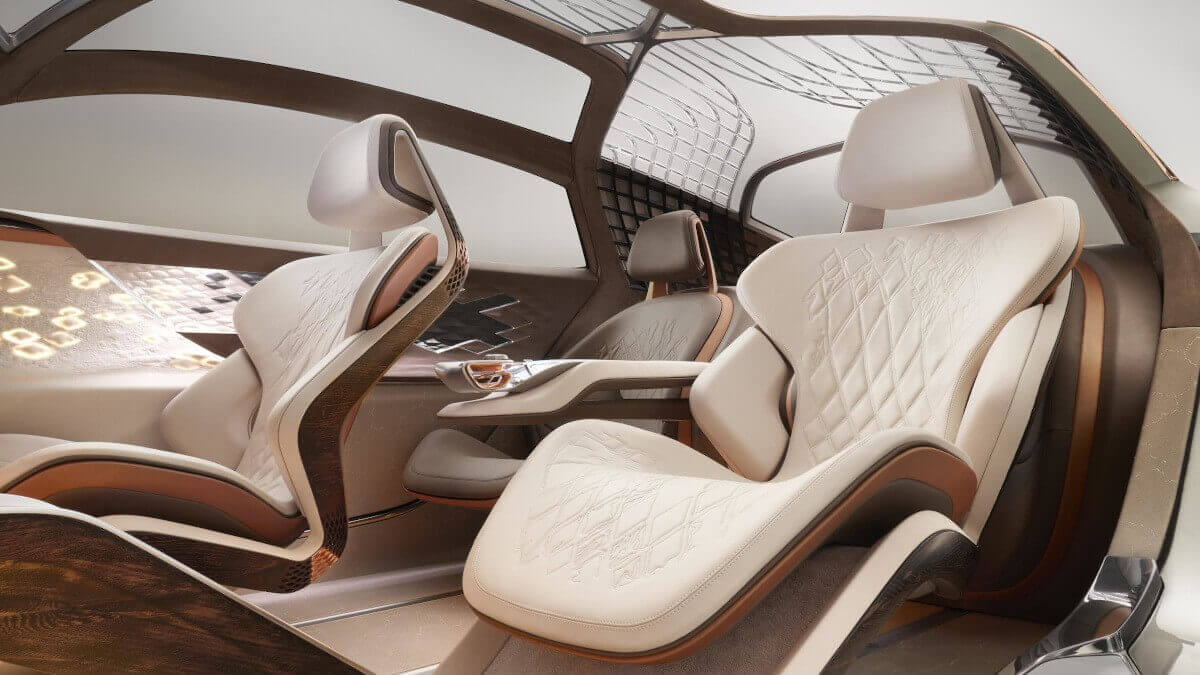 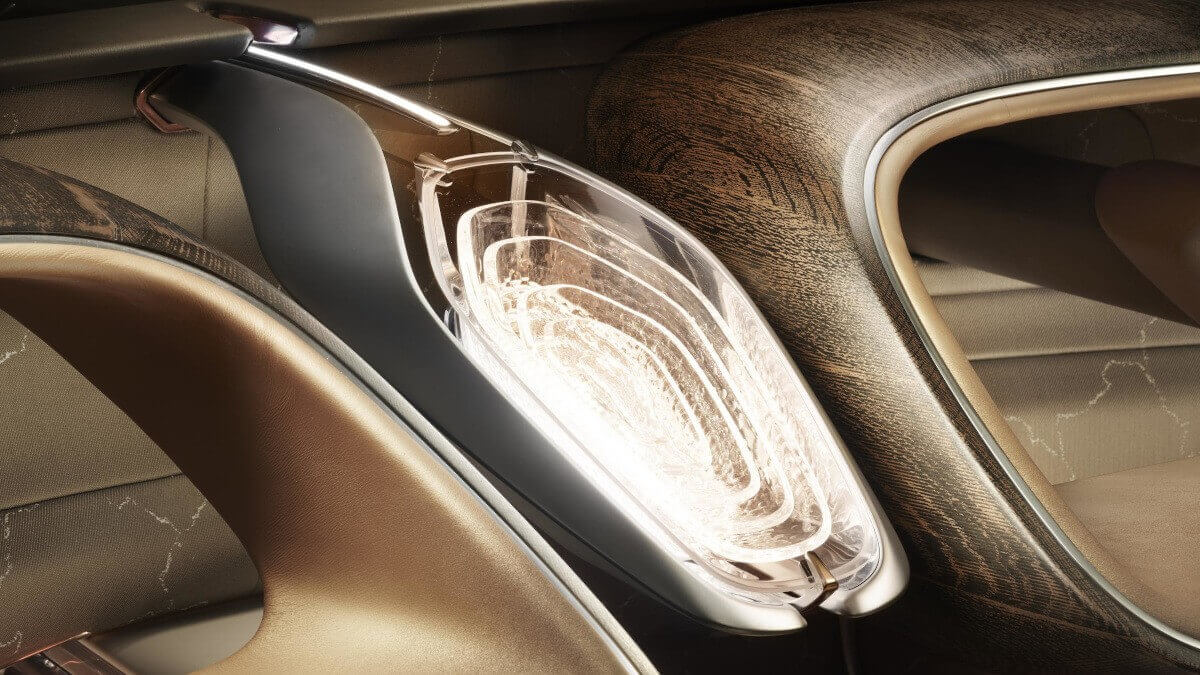 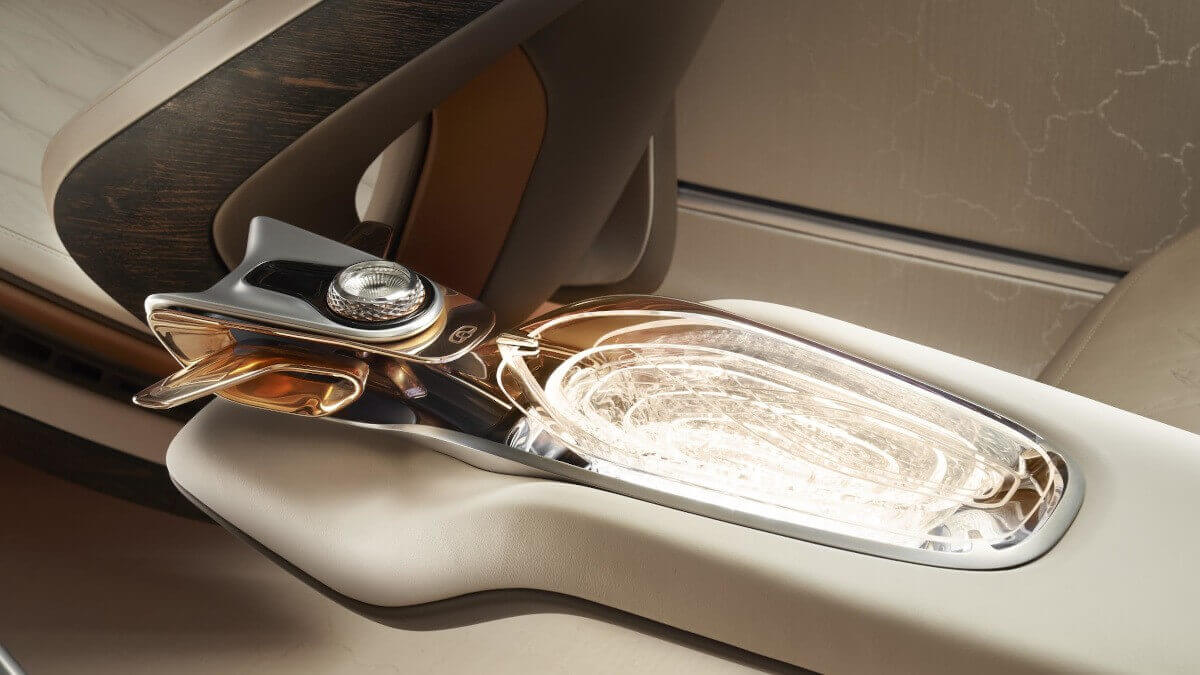 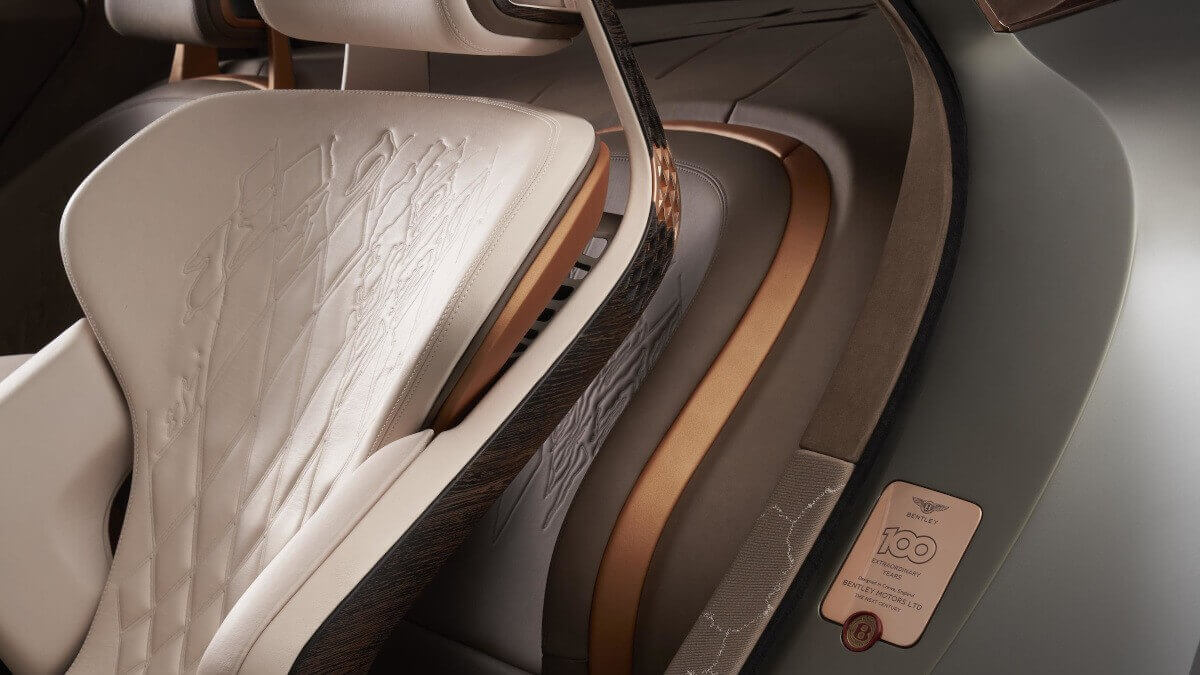 The interior concept of the Bentley EXP 100 GT provides only three seats. All three passengers take their place on adaptive biometric seats, the shape of which changes with the driving conditions and whose sensors monitor the temperature, seating position and environmental conditions in order to react when needed and to increase comfort. The driver’s seat also moves in autonomous mode to the rear, while the steering wheel moves towards the dashboard. The ‘feeling’ light on the dashboard consists of a three-layer, illuminated Cumbria crystal from the Cumbria manufactory, the last manufacturer of hand-blown and hand-cut crystal goods in England. Through a cartridge system, similar to an old pneumatic tube system, various amenities from the trunk under the front hood can be brough into the interior. For example, passengers can order a water decanter with crystal glasses when they are thirsty.

Despite the use of lithium-ion battery cells, which rightly are being critized by environmentalists currently, Bentley would like to focus on the sustainability of the EXP 100 GT. Reclaimed particles from rice husks, which come along in tons in the rice industry and are usually disposed unused, are here used for the paintwork. In the interior you will find approximately 5,000-year-old wood from naturally fallen trees, which was preserved almost undamaged in rivers, lakes and peat bogs. It comes from the organization Fenland Black Oak Project and is provided with copper inlays. The leather-like textiles on the seats are 100% organic and is a by-product of wine-making. On top of that Bentley uses wool from British sheep and silk fabric on some areas.

The basis for the EXP 100 GT is a fully electric platform with four electric motors and a combined torque of 1,500 newtonmeters. These accelerate the concept car (theoretically) in less than 2.5 seconds from zero to 60 mph and up to a maximum speed of 186 mph. As this concept car is to reflect the technology of the year 2035, Bentley thinks about batteries that can be recharged to 80 percent within 15 minutes and allow a range of 700 kilometers with full capacity. And all that with a total car weight of less than 1.9 tons. Yes, dreams are allowed. Another dream is Pirelli’s intelligent tire, which changes its profile and contact surface depending on weather and track conditions. These tires sit on rims with active aerodynamic elements.