In 1967 Alfa Romeo returned to motorsport after a long period of abstinence. For this purpose, the Tipo 33 with mid-engine concept was created in the newly founded motorsport department Autodelta under the direction of Carlo Chiti. Since it was not clear at the beginning whether the car would be entered in the sports car class or prototype class, a street version was created for homologation purposes, which made its debut at the 1967 Turin Motor Show as the 33 Stradale. 18 chassis for the road-legal version were produced, of which eight were demonstably given a body designed by Franco Scaglione at Marazzi. Five more went to external coachbuilders such as Pininfarina, Italdesign Giugiaro and Bertone, where they were built into unique sports car concepts. The whereabouts of the remaining five chassis have not been conclusively clarified. As with the early racing cars Tipo 33/2 and its successor Tipo 33/3 from 1969, the chassis for the 33 Stradale were also riveted together as an H-shaped central structure consisting of two aluminium half-shells, to which specially cast structures made of the light alloy Elektron were riveted at the front and rear. While the front, cage-like structure represented the driver’s footwell and at the same time formed the anchor for the front suspension, there were two cone-shaped cast parts at the rear on both sides of the engine, which behind it led into a bulkhead wall. At the end of 1970 Alfa Romeo presented a new development stage with the Tipo 33 TT for the following racing season. TT stood thereby for ‘Telaio Tubulare’, which literally translates to ‘chassis tubular’ and referred to the tubular frame. The Tipo 33 SC 12 followed in 1976 as the final model of the series. Its letter abbreviation stood for ‘Scatola’ (english: ‘box’) and meant the centrally integrated box frame chassis.

While the Tipo 33/2 started life with a two liter V8 engine, which had been increased in the course of time to 2.5 liters, the Tipo 33/3 got a capacity of three liters. For some races in Australia, Autodelta even developed its own four-liter version of the Tipo 33/4 in 1972. In the Tipo 33 TT, the three-liter V8 engine was used at first, as the successor model was already being worked on behind the scenes. This debuted in the middle of 1973 as the Tipo 33 TT 12 and received as power source a twelve-cylinder boxer engine with three liters of displacement, newly developed by Carlo Chiti. It delivered 370 kW/500 hp at 11,000 rpm, which was quite impressive at the time. This power arrived the rear axle via a five-speed transmission. For the first time, the body, made of glass fiber reinforced plastic, integrated a front spoiler and a massive rear wing. Alfa Romeo debuted the car specifically in the middle of the 1973 racing season in order to be able to test it directly under competitive conditions and to rectify all faults directly. So the Tipo 33 TT 12 became the car to beat from 1974 onwards. In 1975, seven of the nine races of the World Sports Car Championship were won with driver legends such as Arturo Merzario, Jacky Ickx, Rolf Stommelen, Mario Andretti, Jochen Mass, Brian Redman, Jacques Laffite, Vittorio Brambilla and Nino Vaccarella. As at that time only the best seven results per season were used for the brand ranking, Alfa Romeo stood there with a white vest. In addition, they won the Targa Florio in Sicily, which wasn’t part of the championship. 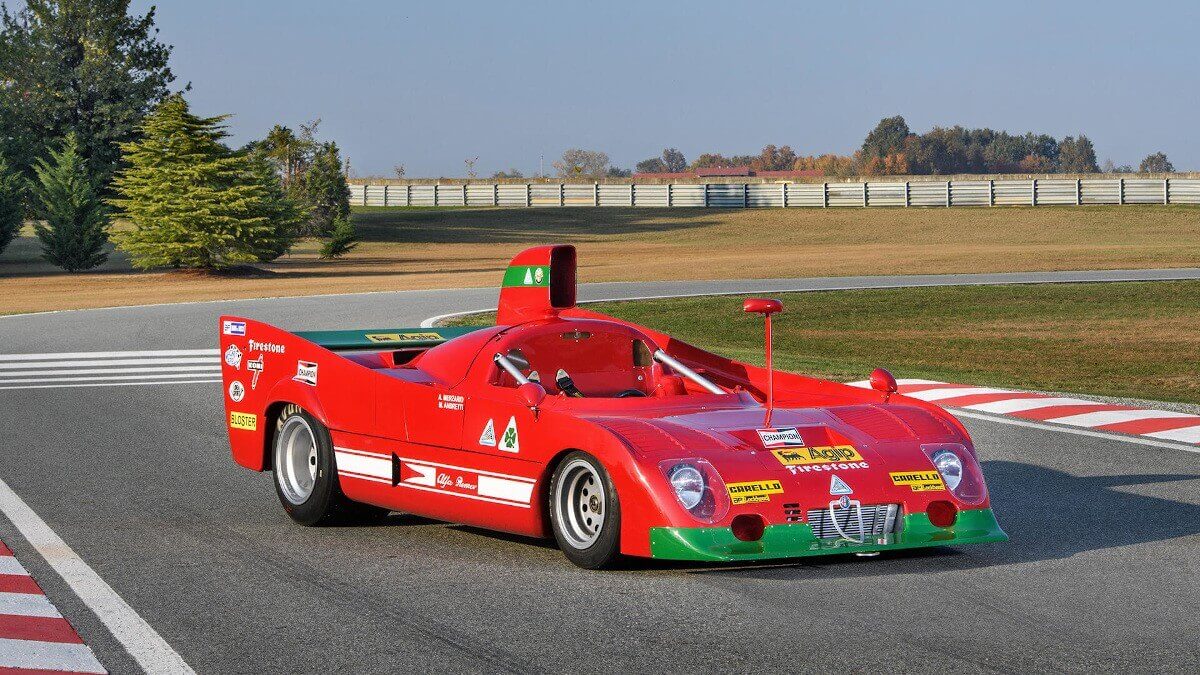 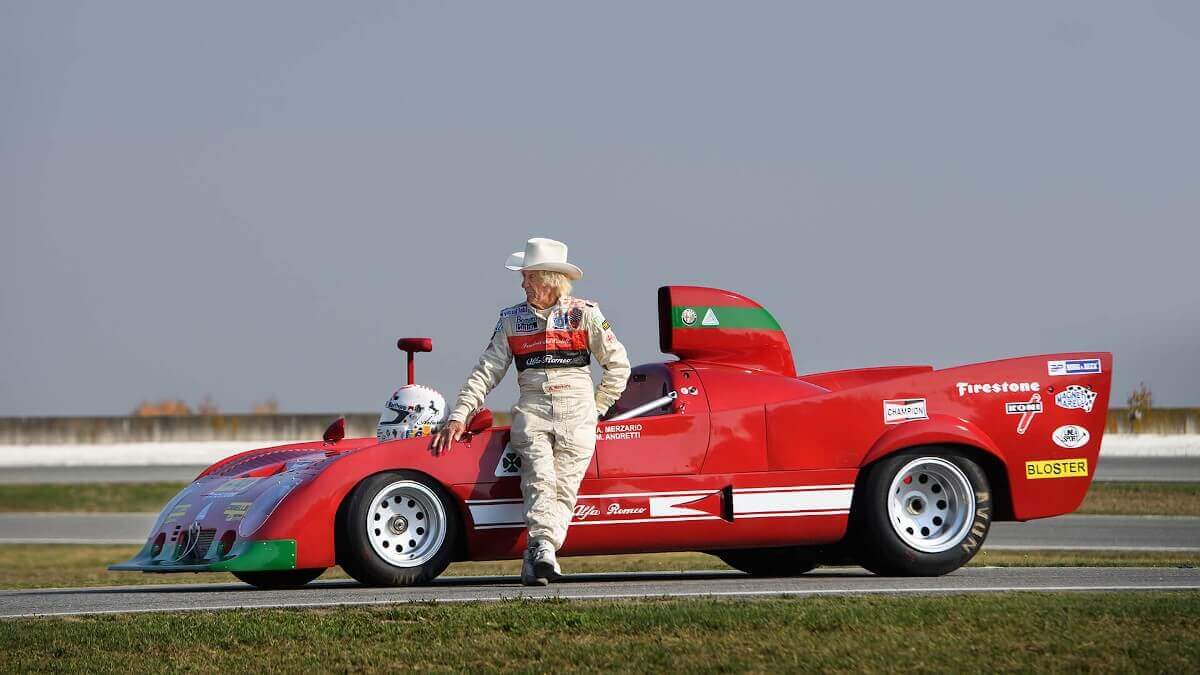 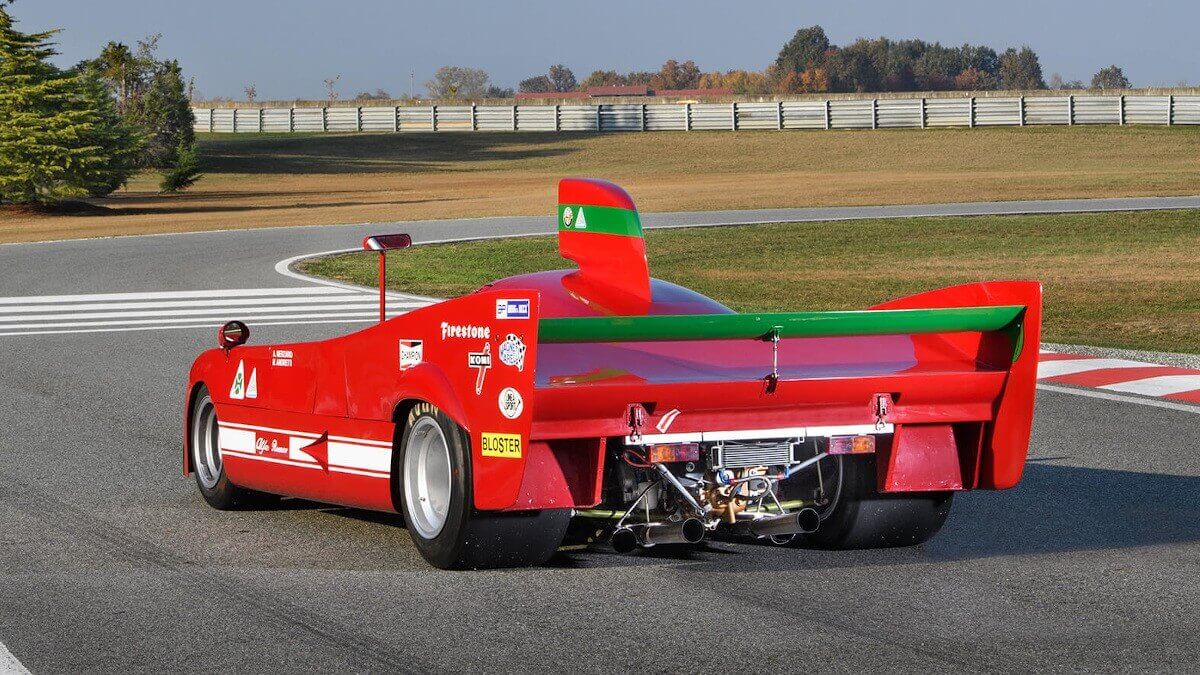 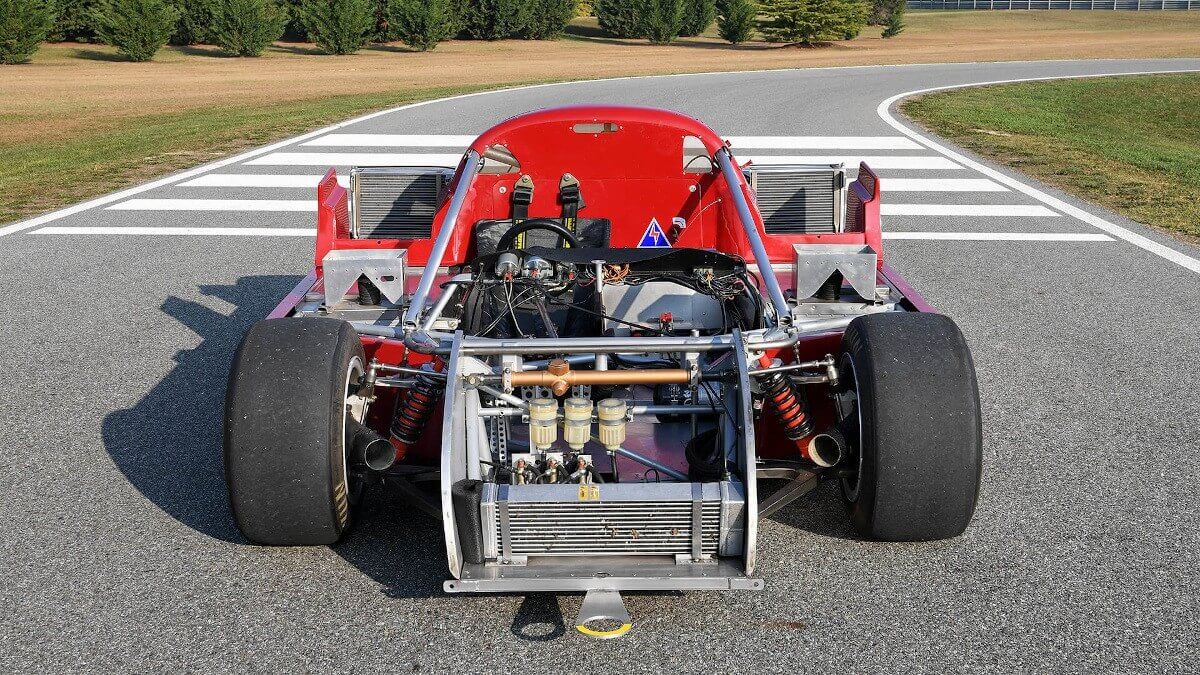 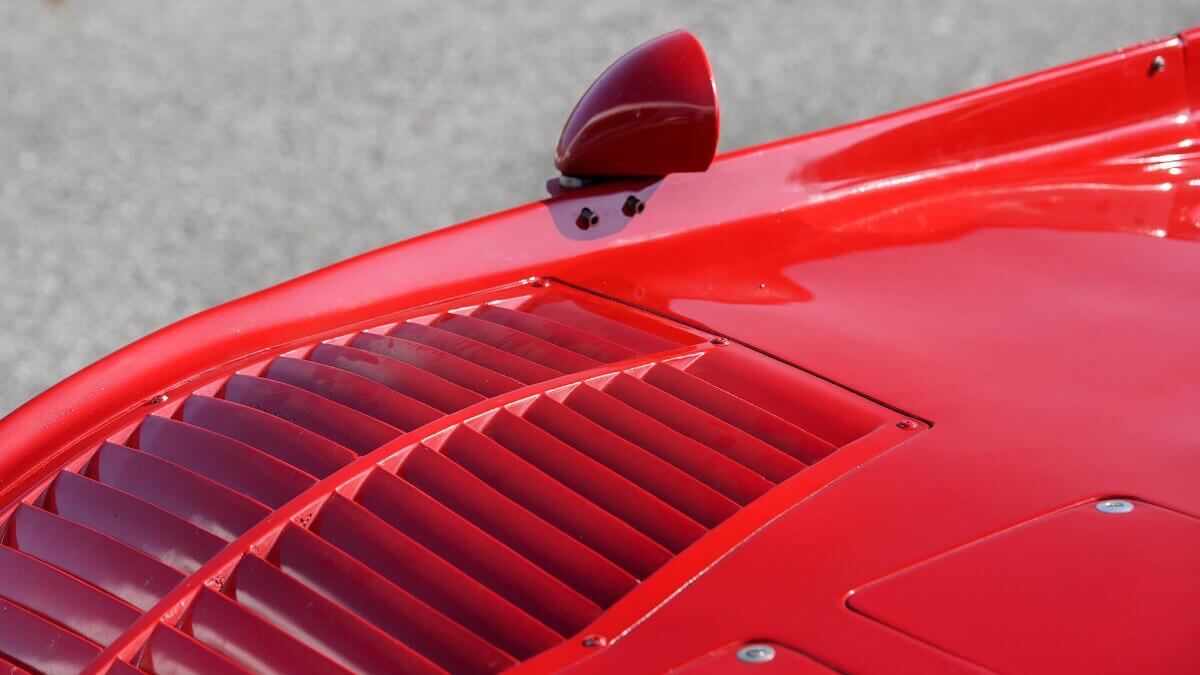 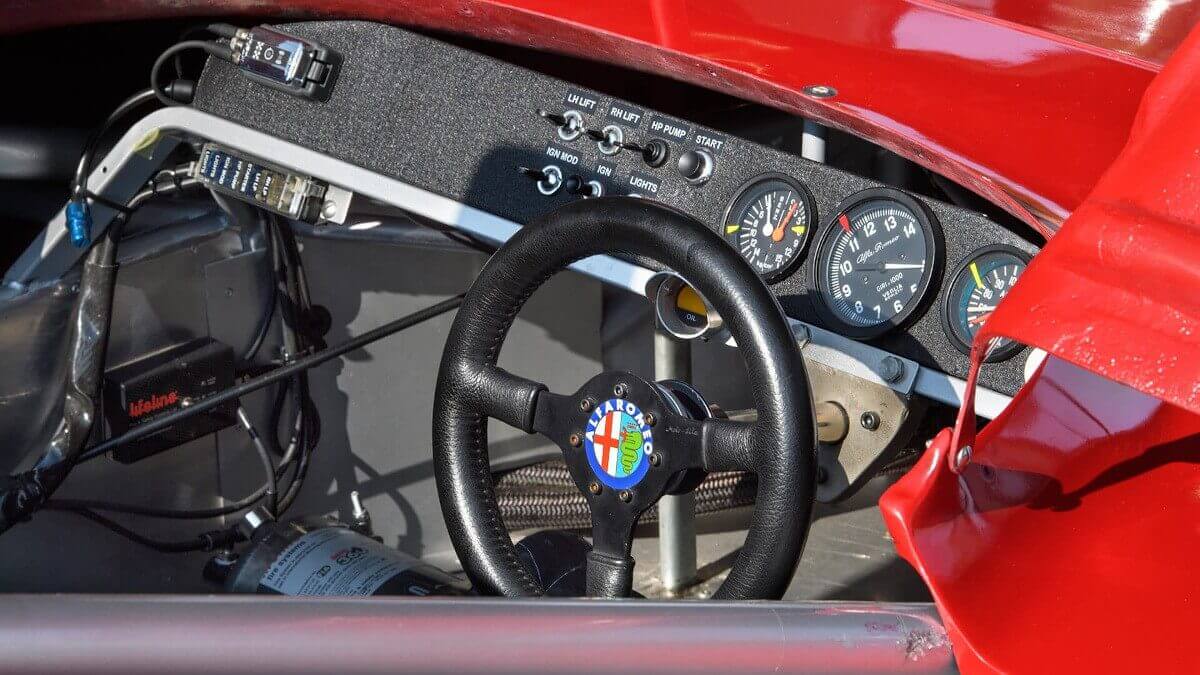 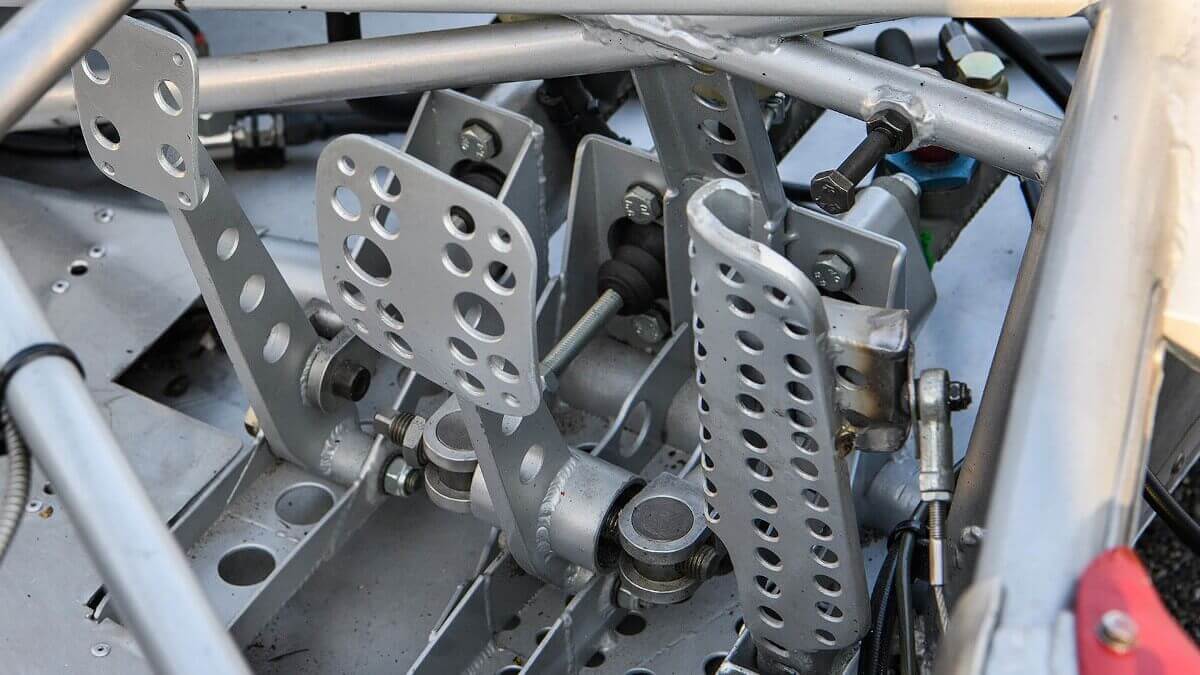 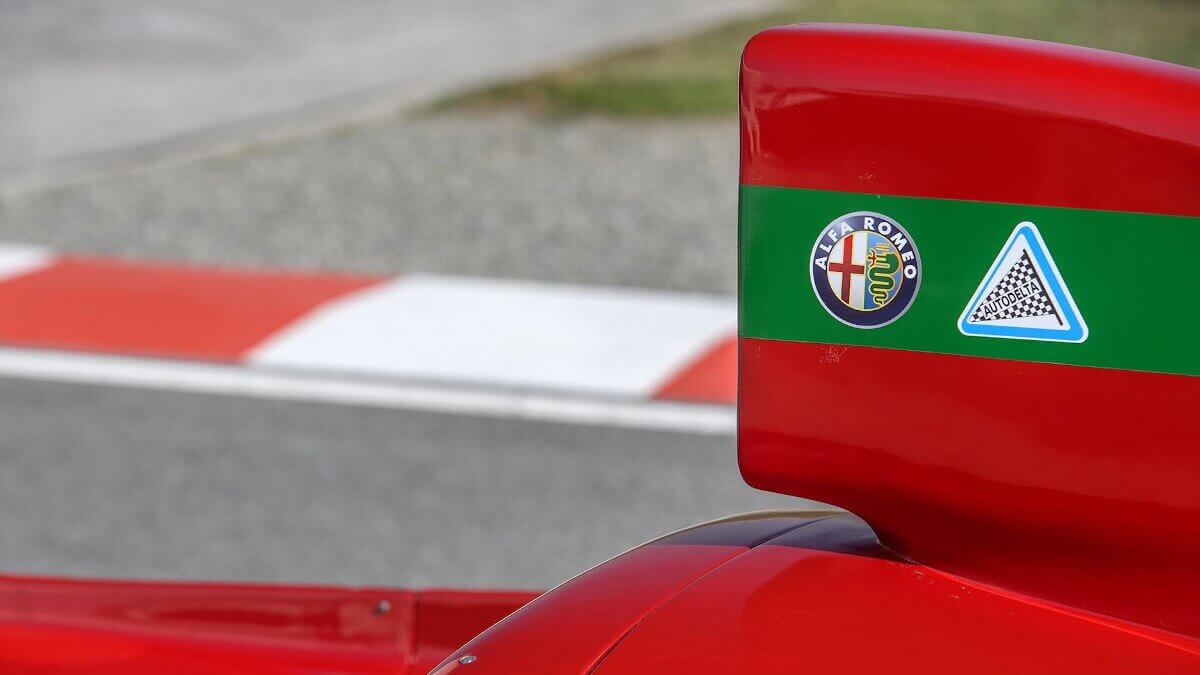 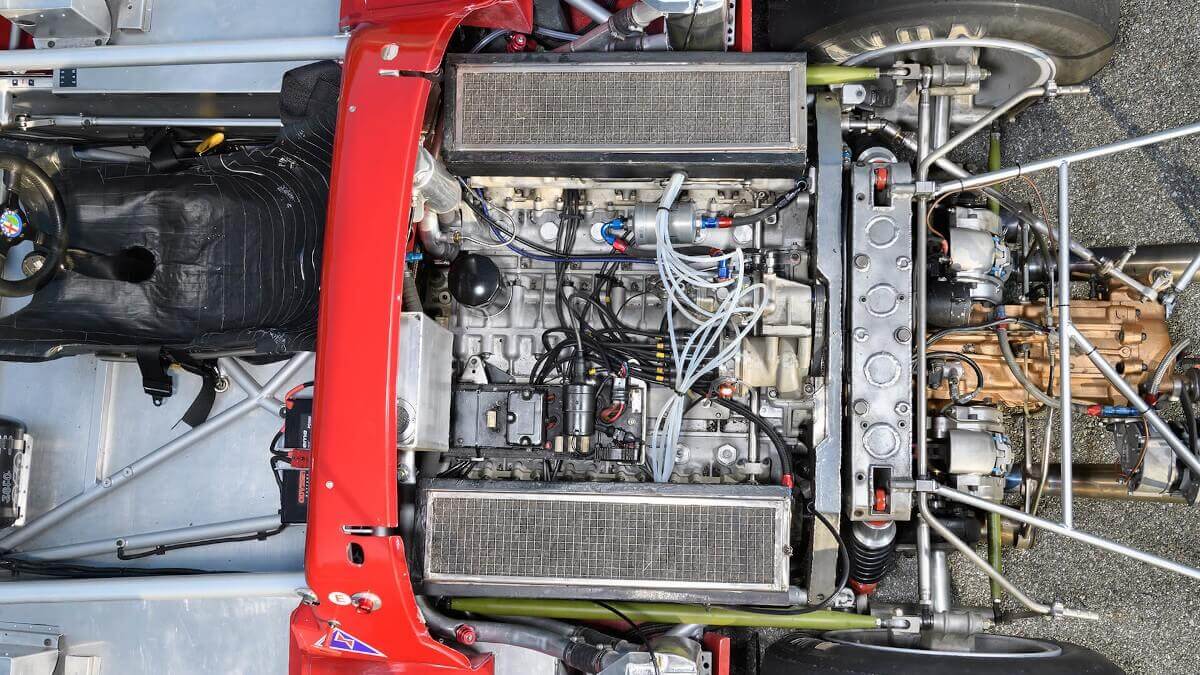 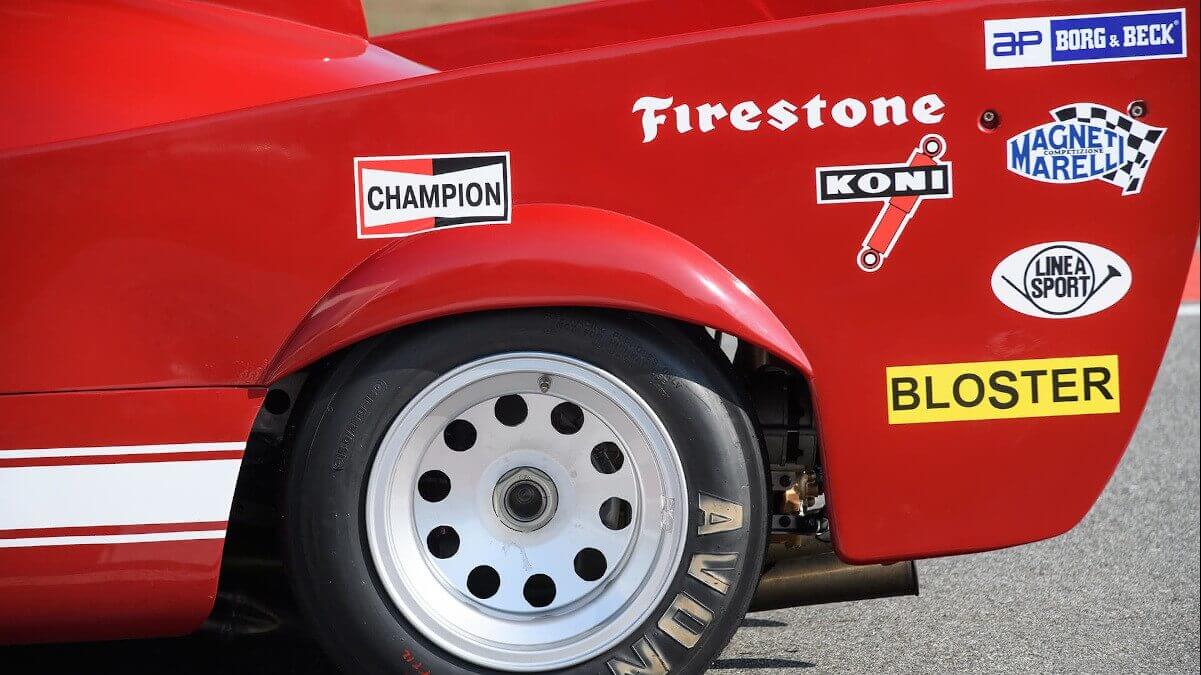 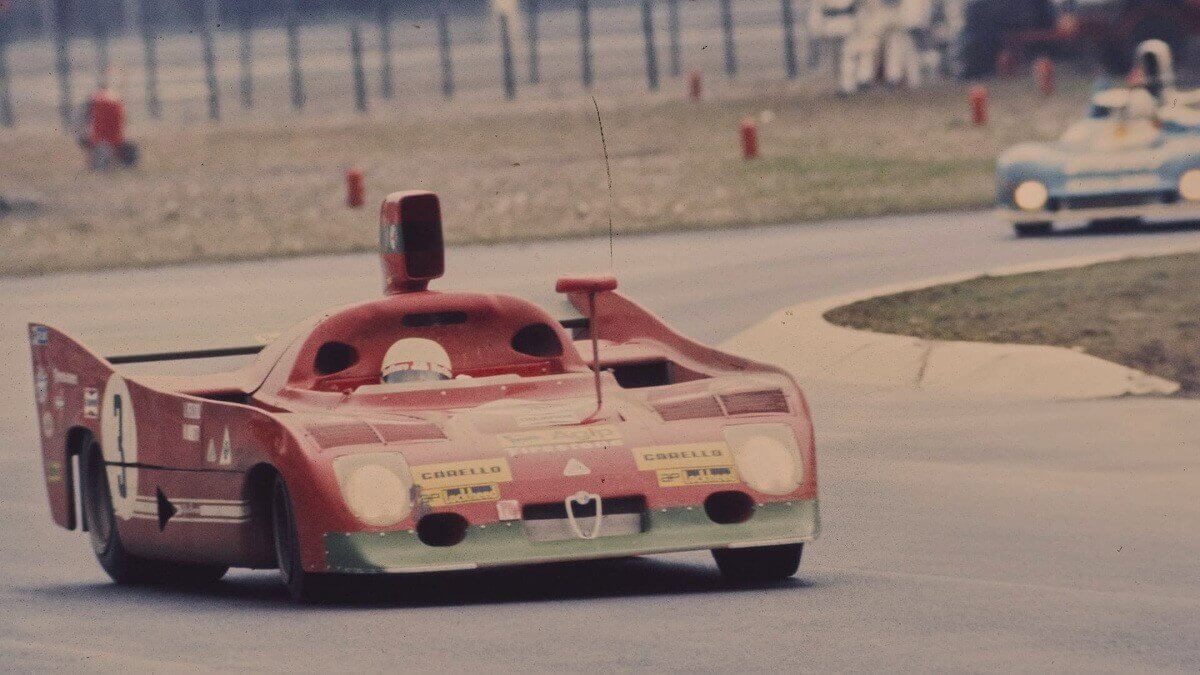 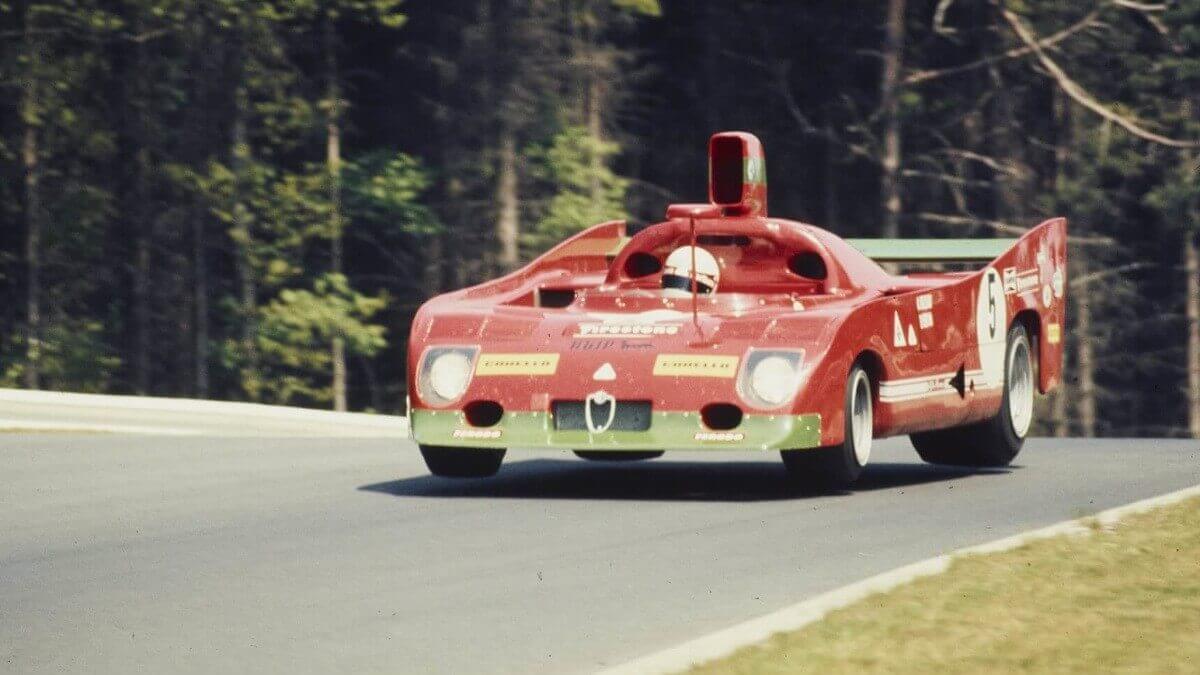 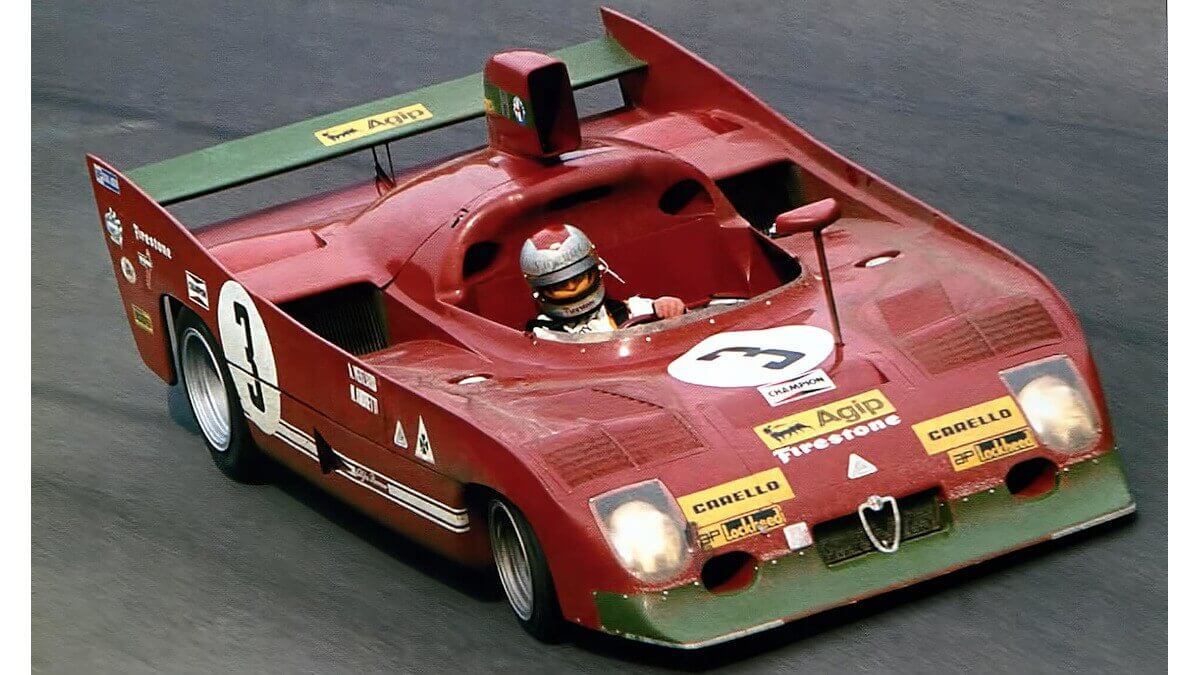 At the classic car dealer Girardo & Co. the vehicle with the chassis number AR11512 008 is currently available for purchase. It was created in early 1974 for the works team Autodelta and made its racing debut at the 1,000 kilometers of Monza on 25 April with Arturo Merzario and Mario Andretti behind the wheel. The two put the car on pole position in qualifying and finally won the race four laps ahead of their team-mates Jacky Ickx and Rolf Stommelen and another four laps ahead of the third Tipo 33 TT 12 with Carlo Facetti and Andrea de Adamich. Chassis #008 continued to be driven by Arturo Merzario throughout the 1974 season, with Jacky Ickx, Brian Redman and Vittorio Brambilla alternating as second drivers. Races in which the car demonstrably took part are the 1,000 kilometers of Imola, the 1,000 kilometer race at the Nürburgring, the 1,000 kilometers of Zeltweg, the 1,000 kilometers at Watkins Glen and the CanAm race at Watkins Glen. Throughout the year #008 remained in the classic race color of Italy, red, with a green front spoiler and rear wing (except in Watkins Glen, where the wing was painted red), with starting numbers changing from race to race. Only in Imola was there a body change with a shorter rear end to create more downforce.

For the 1975 season Alfa Romeo could win the Willi Kauhsen Racing Team (W.K.R.T.) as a factory supported private team to race the Tipo 33 TT 12. Chassis #008 was one of the cars now used by W.K.R.T. for the races of the Sportscar Championship and, with four victories and five second places in the nine rounds, was instrumental in Alfa Romeo becoming manufacturer world champion. And this was against the assembled competition of Ferrari, Porsche, March, Alpine-Renault, Lola, Mirage and Chevron. The overall victory in the Targa Florio was also achieved with this exact car, whereby the dominance of the Alfa was already demonstrated in the training session alone: It set the pole time with 36 minutes and 7 seconds, which was 52 seconds faster than the second placed car. Interestingly, Arturo Merzario always raced in #008, while his co-drivers changed every race. In 1975 he drove together with Jacky Ickx, Jochen Mass, Jacques Laffite, Nino Vaccarella and Vittorio Brambilla. After the last great success at the Targa Florio, the time of racing for #008 ended and it was retired. Alfa Romeo kept this special racing car until October 1984 and then sold it for 65 million lire to a Swiss collector. Two and a half years later Matteo Carraba from Turin bought the Alfa for 85 million lire and brought it back to Italy. Copies of the respective purchase contracts are still part of the extensive vehicle documentation today. In the late 1990s, Ian Donaldson travelled to Turin to have a look at a Ford Escort RS Cosworth in Matteo Carraba’s collection. To his surprise, he also came across the Tipo 33 TT 12, which at that time displayed a mix of the sponsor prints of W.K.R.T. and the 1974 factory team. Without further ado Donaldson acquired the car, revived the technology, had the optics of the first race in Monza 1974 reproduced and showed the car several times at the Goodwood Festival of Speed. In 2012 the current owner took over the racing car and added it to his collection, which also includes a Tipo 33/2 ‘Daytona’ and a Tipo 33/3 TT. In October 2017 he reunited Arturo Merzario and #008 at the Autodelta test track in Balocco. He also drove the car at the Le Mans Classic in 2017 and 2018 as well as at the Dix Mille Tours in Paul Ricard in 2017 together with Derek Bell.