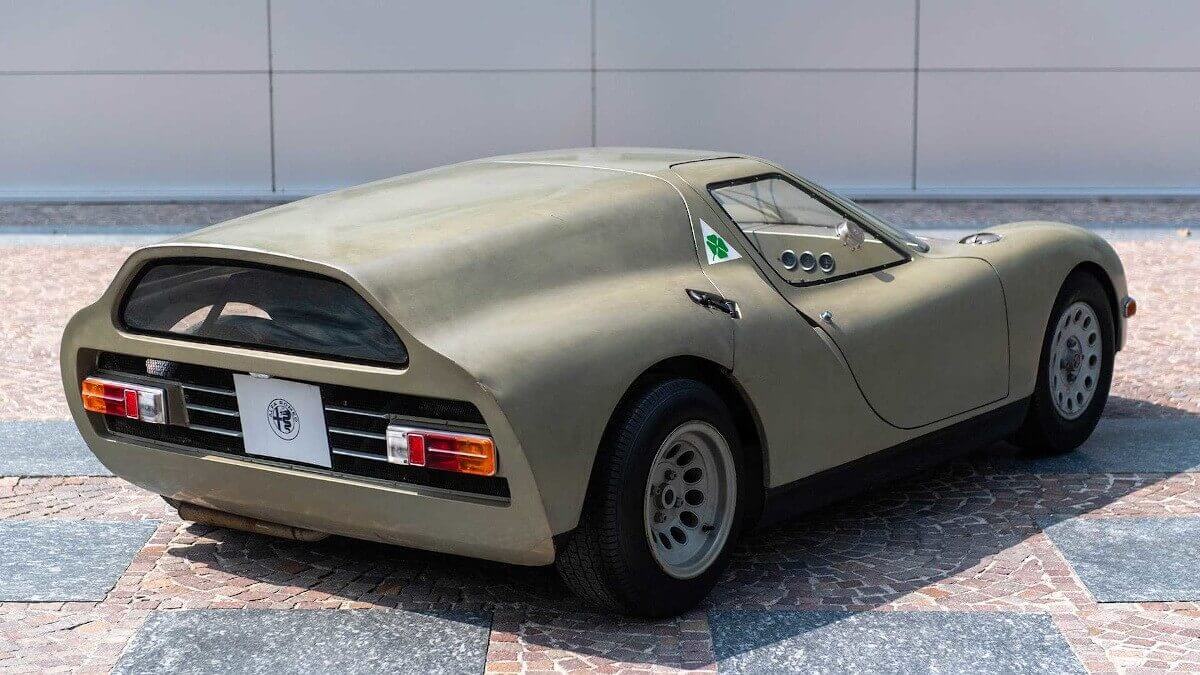 In the 1960s, Alfa Romeo successfully participated in the World Sports Car Championship and therefore developed the Tipo 33 on an H-shaped tubular frame in the motorsports department Autodelta. In addition to the pure competition vehicles, this sports car was also available in a small edition with road approval. Until today it isn’t quite clear how many Tipo 33 Stradale were built in total. Only one thing is clear: there weren’t many. On one of the tubular frame chassis intended for the Stradale, Alfa Romeo produced a racy concept car for the 1966 Paris Motor Show. Next to a new bodywork, which was ordered from OSI (Officine Stampaggi Industriali) in Turin, this vehicle also received a deviation from the Tipo 33. Behind the two seats is not the purebred racing V8 engine, but a 1.6-liter four-cylinder twin camshaft engine from the Giulia Sprint GTA. This engine with its aluminium block is directly interlocked with clutch and gearbox and drives the rear wheels with its 85 kW/115 hp. Since only 700 kilograms had to be moved, this power was sufficient for a topspeed of 124 mph.

In the 1960s, OSI was one of the most sought-after design studios in Italy. Under the direction of Sergio Sartorelli, the body of the unique ‘Scarabeo’ for Alfa Romeo was also created here. The original version received a rather angular design and a pulpit-like cockpit cover, which opened as a whole to make the entrance possible. The original plan of the responsible Alfa engineers Giuseppe Busso and Orazio Satta Puglia was a smaller sports car underneath the Tipo 33, which would also be suitable for racing as well as for sale to private individuals. However, the sensational study didn’t appeal to their bosses, so OSI was commissioned behind the scenes to design a new body that would be easier to produce in series. Exactly when this vehicle was finished in its still visible, never painted optics isn’t clear today. While the front section with its headlights covered with clear glass and curvy design fits perfectly into the sports car world of that time, the rear section ends relatively abruptly behind the rear wheels with an unusual Kamm tail. The Alfa chief department’s “no” remained, which is why a third Scarabeo vehicle, which was planned as a Spyder, wasn’t completed anymore. Also the coachbuilder OSI had no bright future. After only eight years, the design center was closed, where greats like Tom Tjaarda or Giovanni Michelotti had worked previously. The Centro Stile of Fiat took over most of the employees. 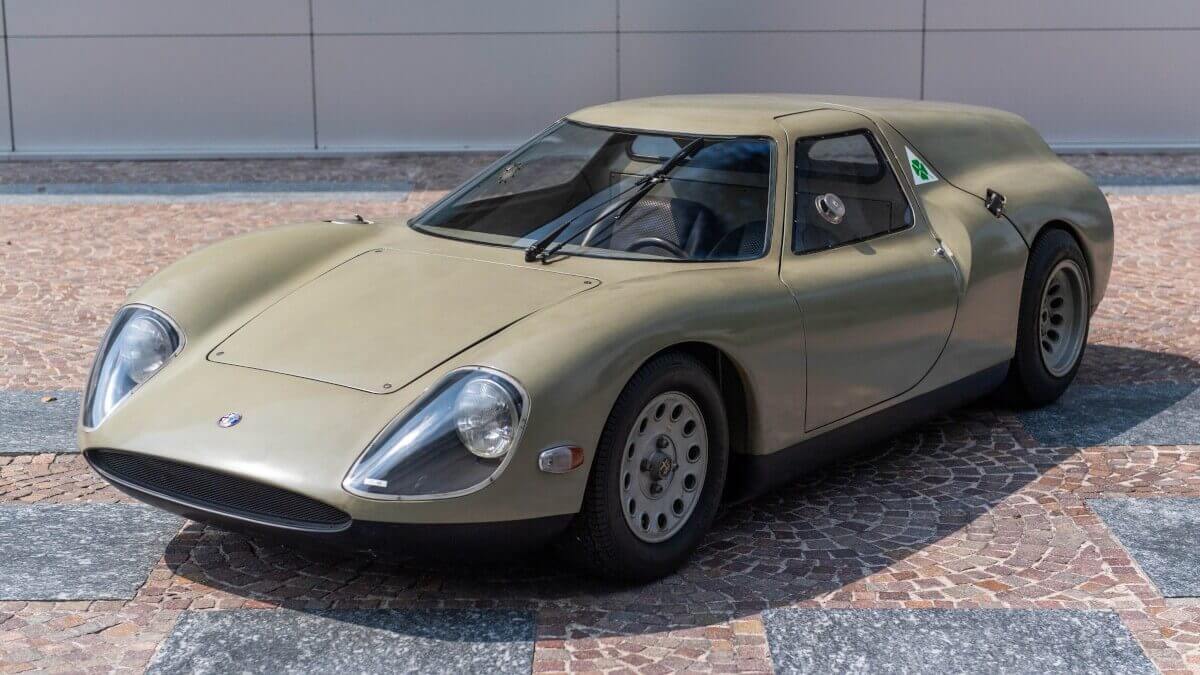 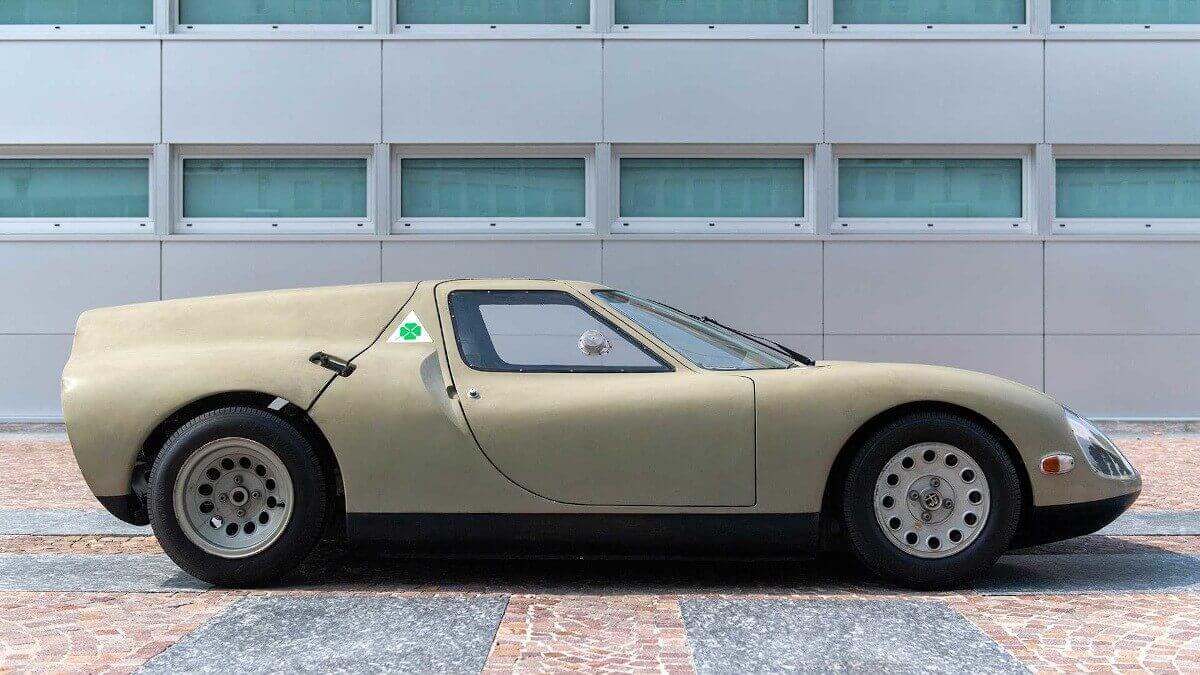 Both the never completed Spyder and the second Scarabeo prototype belong to the collection of the Museo Storico Alfa Romeo in Arese/Italy. The Coupé now is on loan to the Musée National de la Voiture at castle Compiègne some 80 kilometers north of Paris. There the special exhibition ‘Concept-Cars. Beauté Pure’, in which around 30 vehicles can be seen, which at different times caused a sensation as showcars, dreamcars and concept studies at various motor shows, will take place until 23 March 2020. In addition, there are over 100 other exhibits such as photographs, models, sketches and documents, which underline the development of the concept cars. The Château de Compiègne has been home to France’s National Car Museum since 1927. The main exhibition, together with the reserve, now comprises more than 15,000 exhibits from the carriage age to the automobiles, as well as motorcycles, contemporary clothing, luggage, armour and photographs.