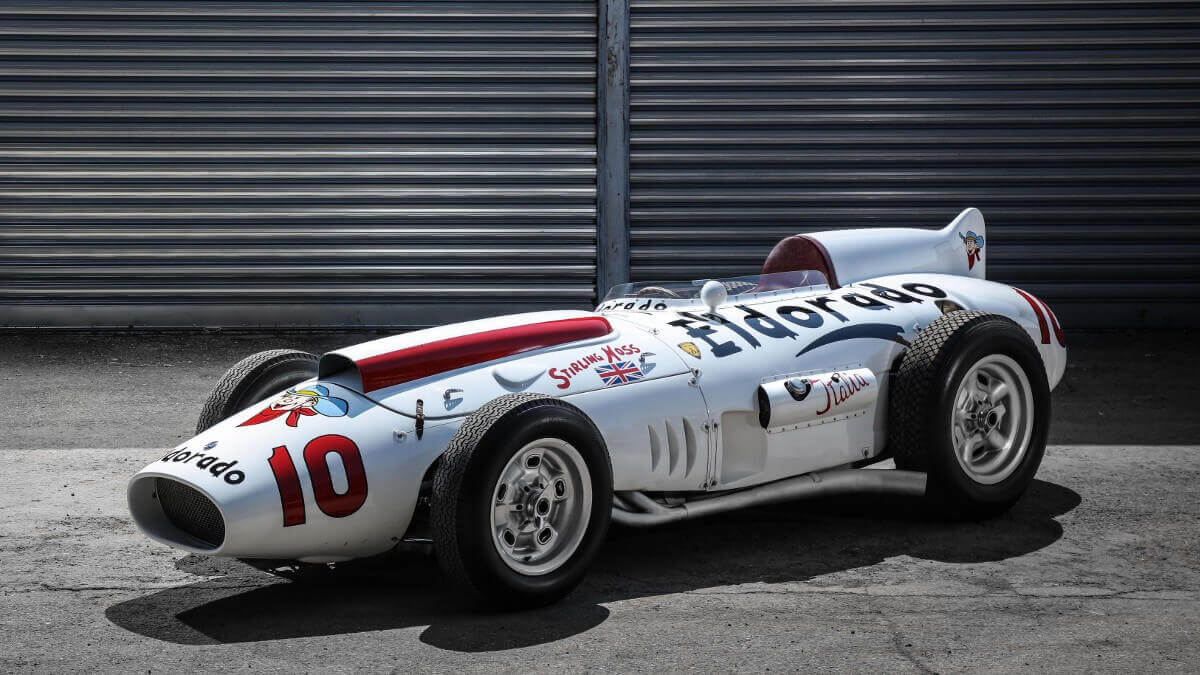 In today’s motorsport world they are a fixed image: sponsors. Whether beverage producers, mobile operators or until a few years ago the big tobacco companies, all racing cars shine in the colors of their main sponsors. That was not always the case. At the beginning of the motorsport age, about 120 years ago, each nation received their own color assigned by the motorsport authorities. So it came to British Racing Green, Italian Red or White for German race cars, later changed to Silver shortly before World War 2. Incidentally, it was not about the birth countries of the drivers, but about the origin of the respective car manufacturers as well as the private teams (mainly after the war). How did it come to today’s sticker crowd?

The general beginning happened, where else, in the USA. There small private teams at the Indy 500 began renting space on their racing cars to companies outside the racing circus to better finance their costs. A famous example from the sports car world is the Porsche 550 Spyder from Carrera Panamericana 1954. This trend spilled into Europe for the first time in 1958 in Italy. There, the industrialist Gino Zanetti commissioned a formula race car at Maserati, which was to be painted according to his wished in the colors of his ice cream brand ‘Eldorado’. The intended purpose was the ‘Trofeo dei due Mondi’ (race of the two worlds), organizes by the Italian Automobile Club on the track in Monza. It was a 500-mile race, inspired by the Indianapolis 500, to which participants from Europe and the US were invited. 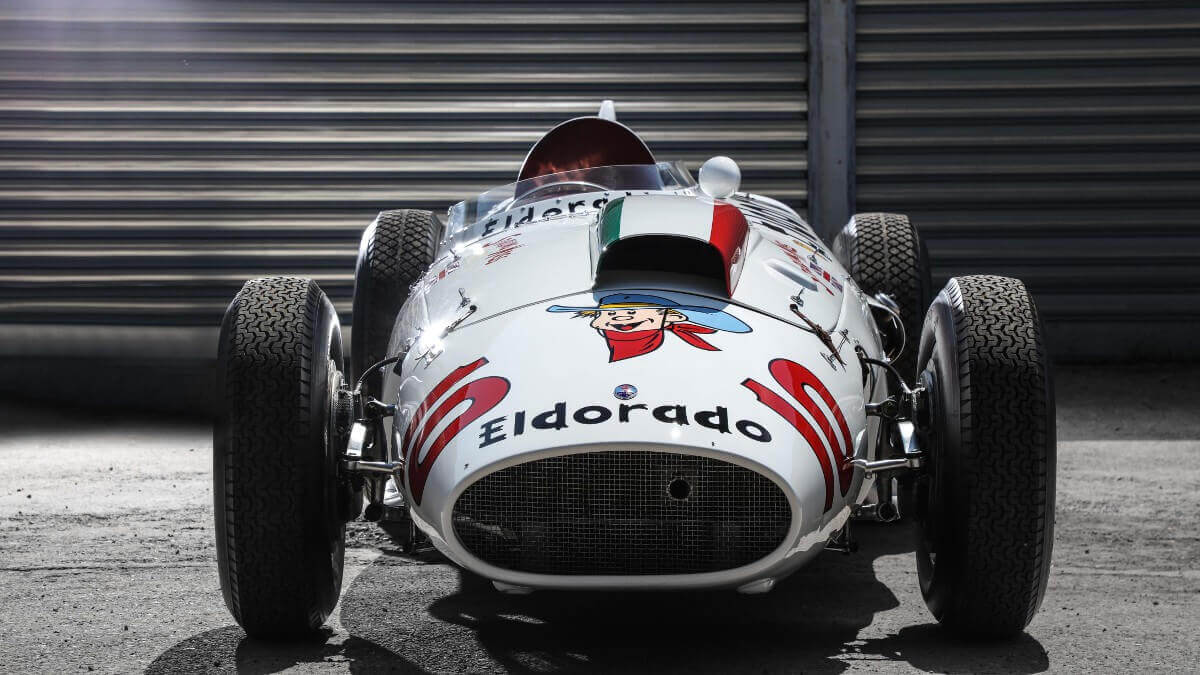 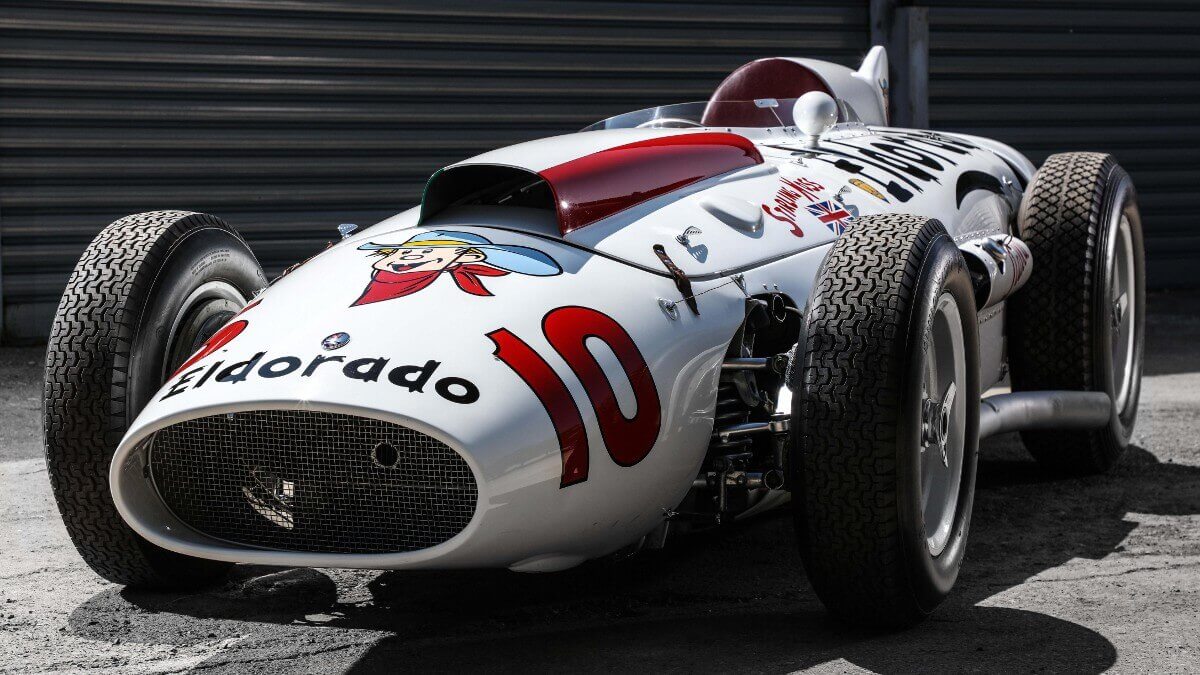 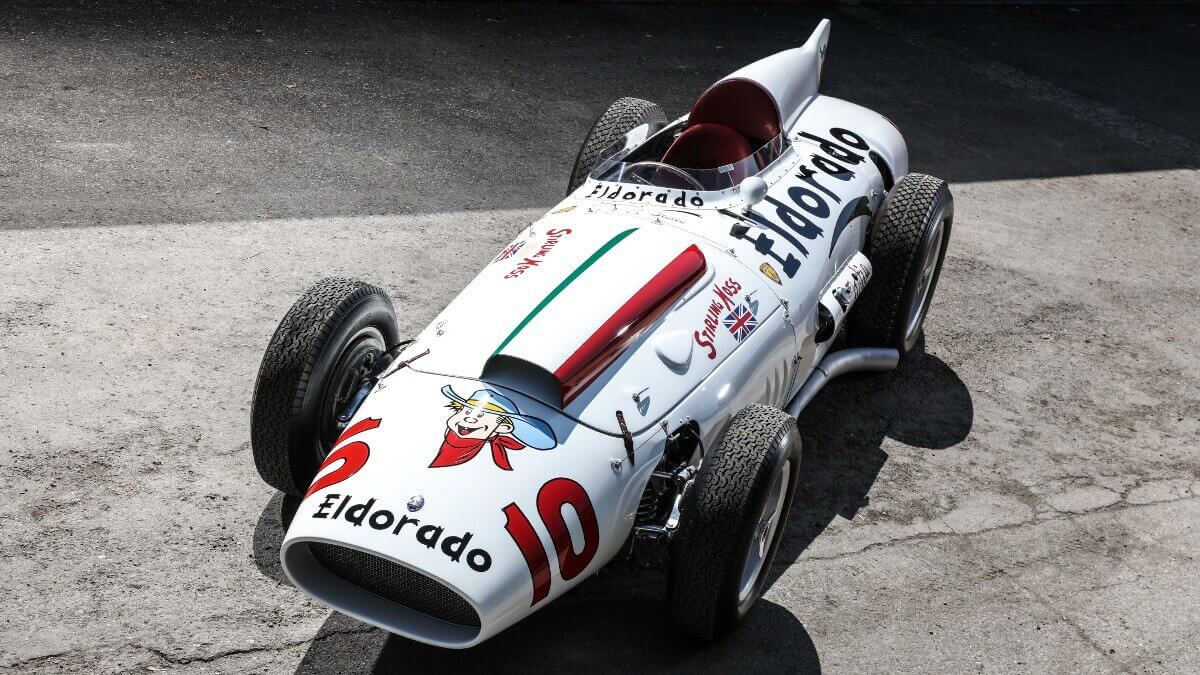 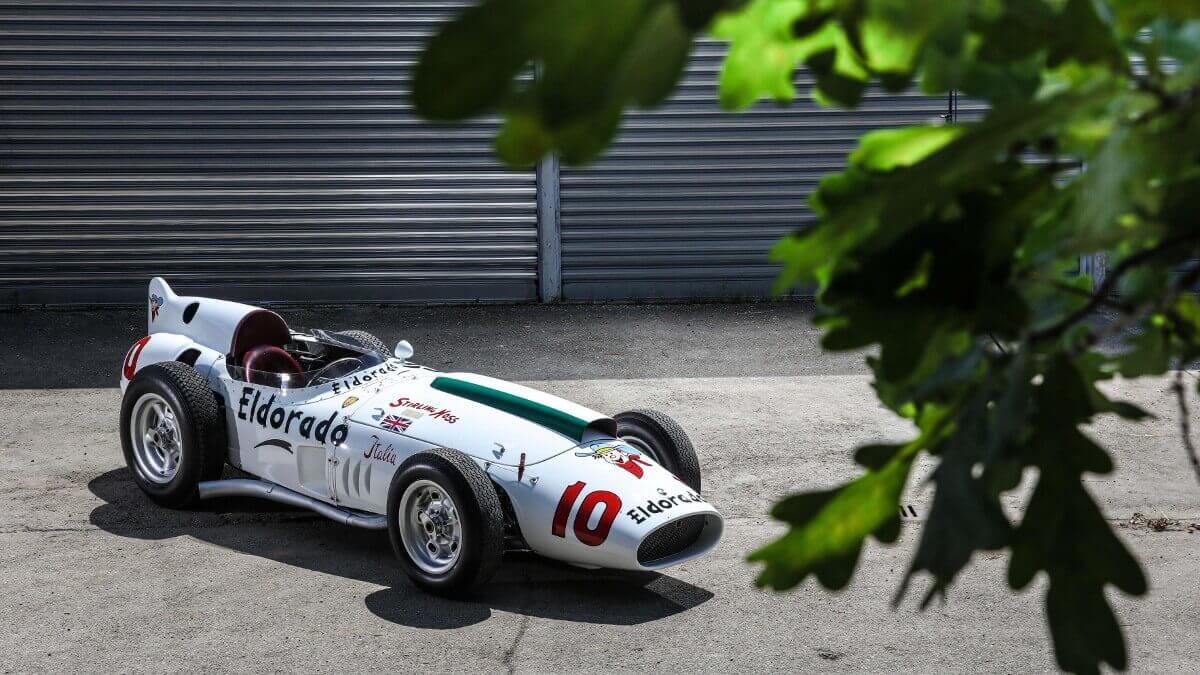 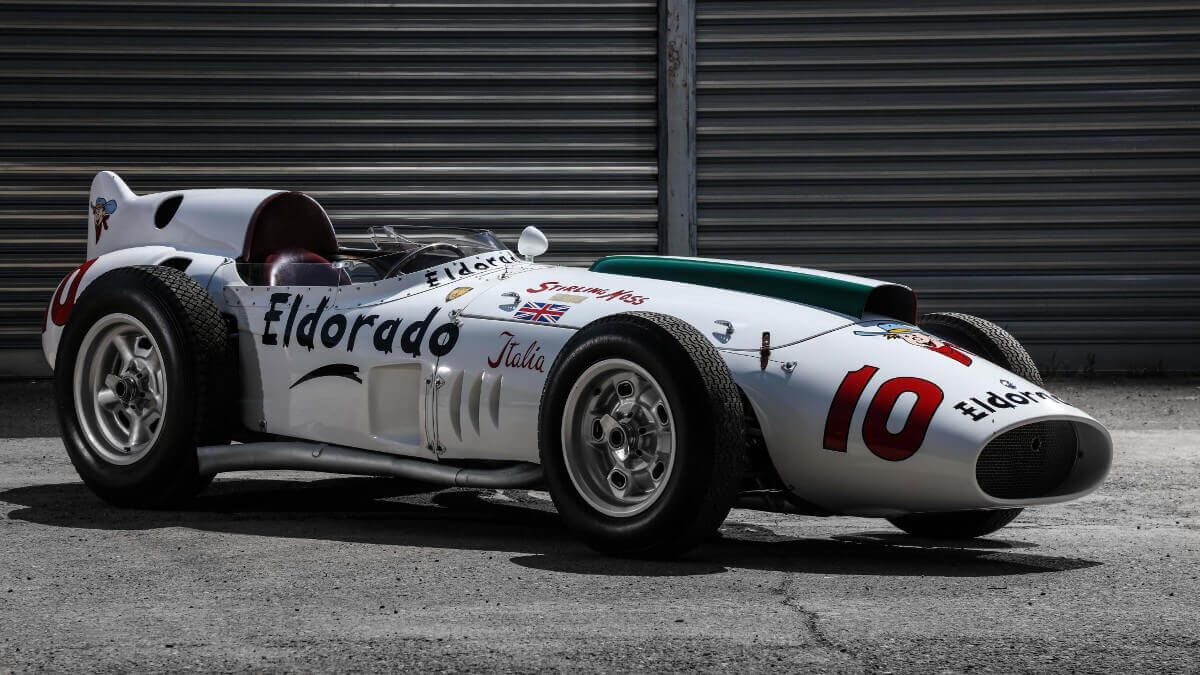 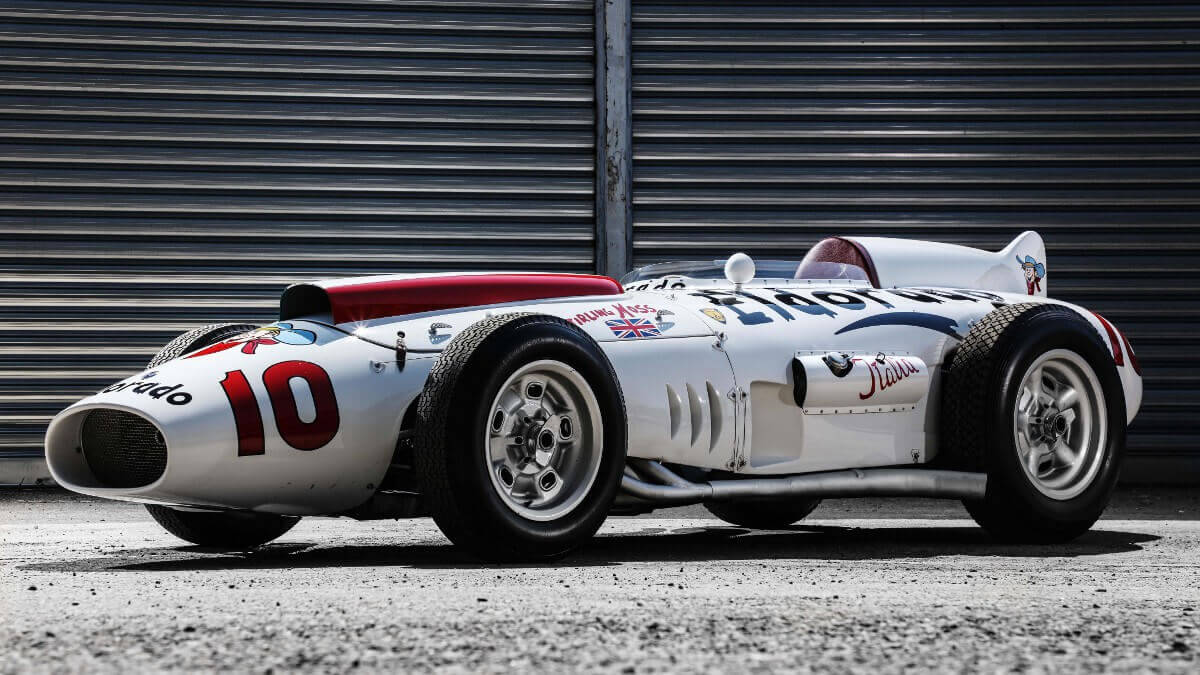 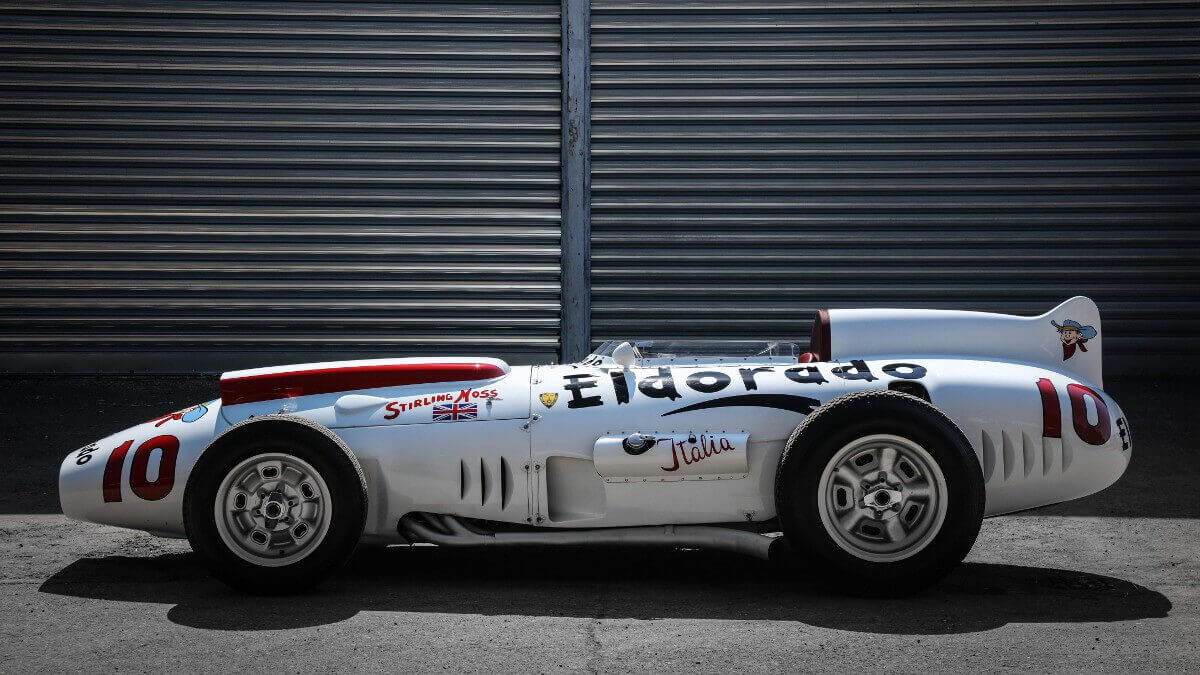 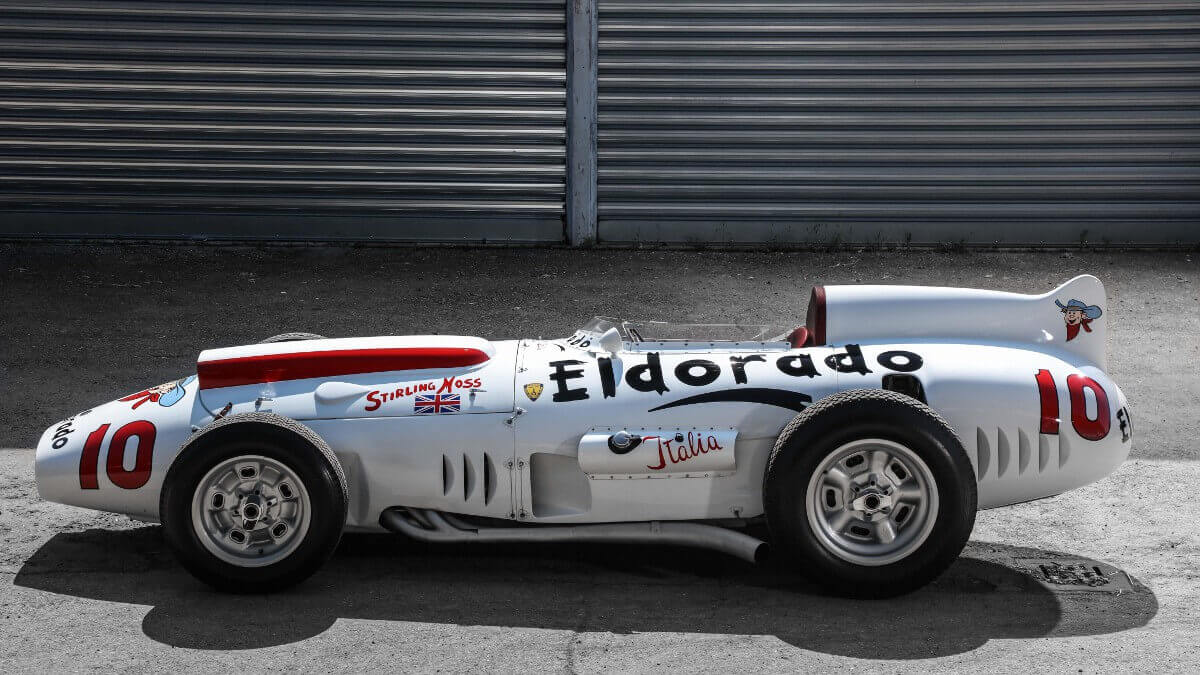 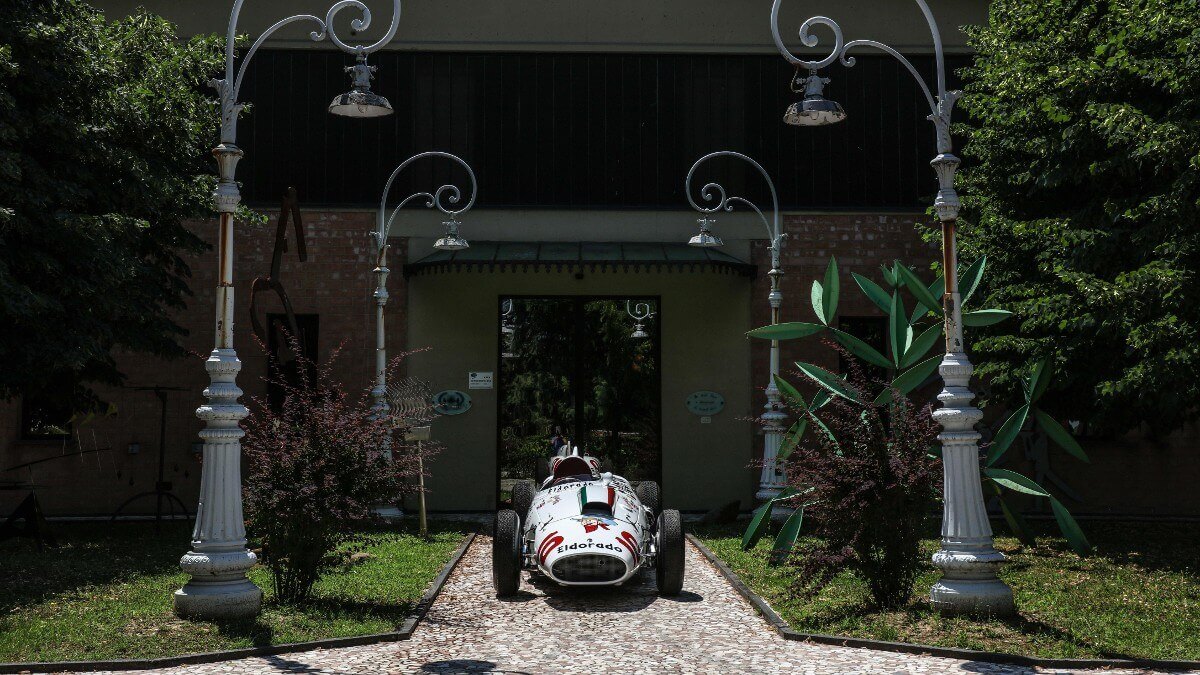 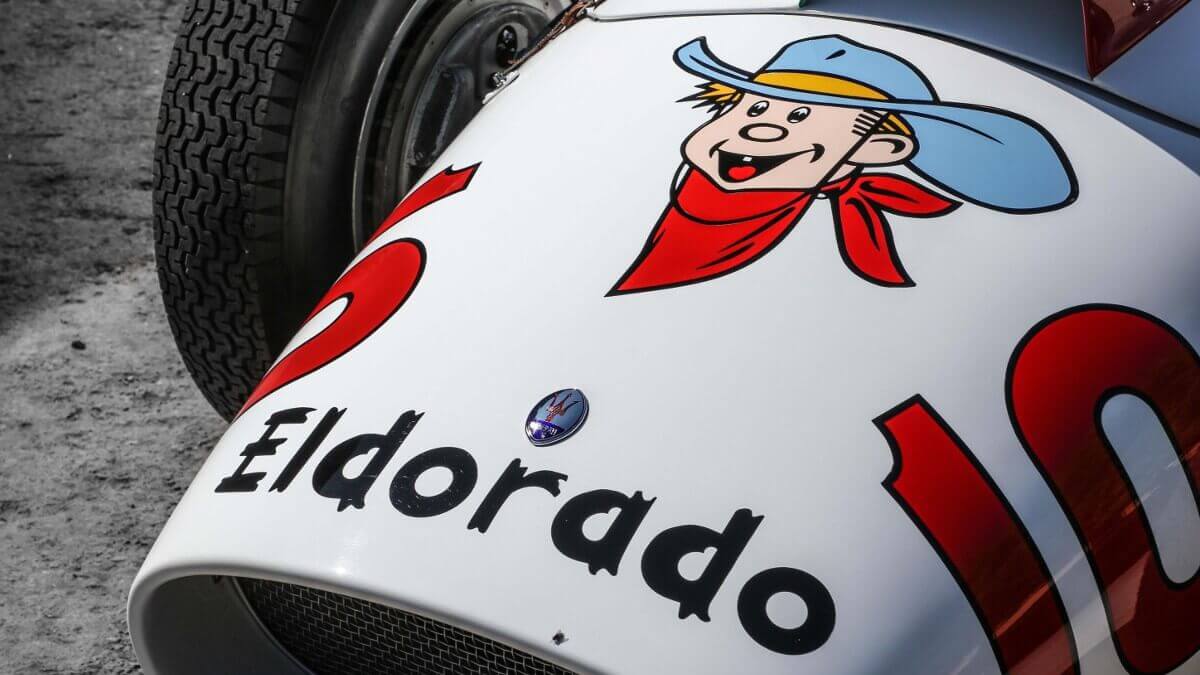 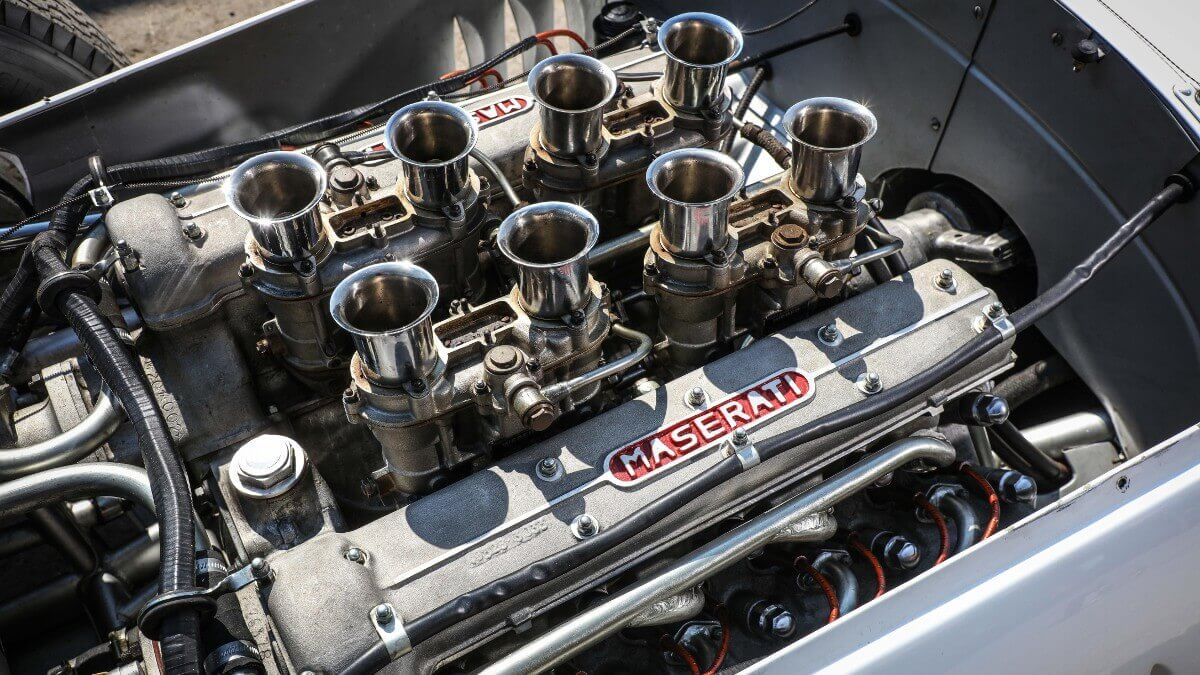 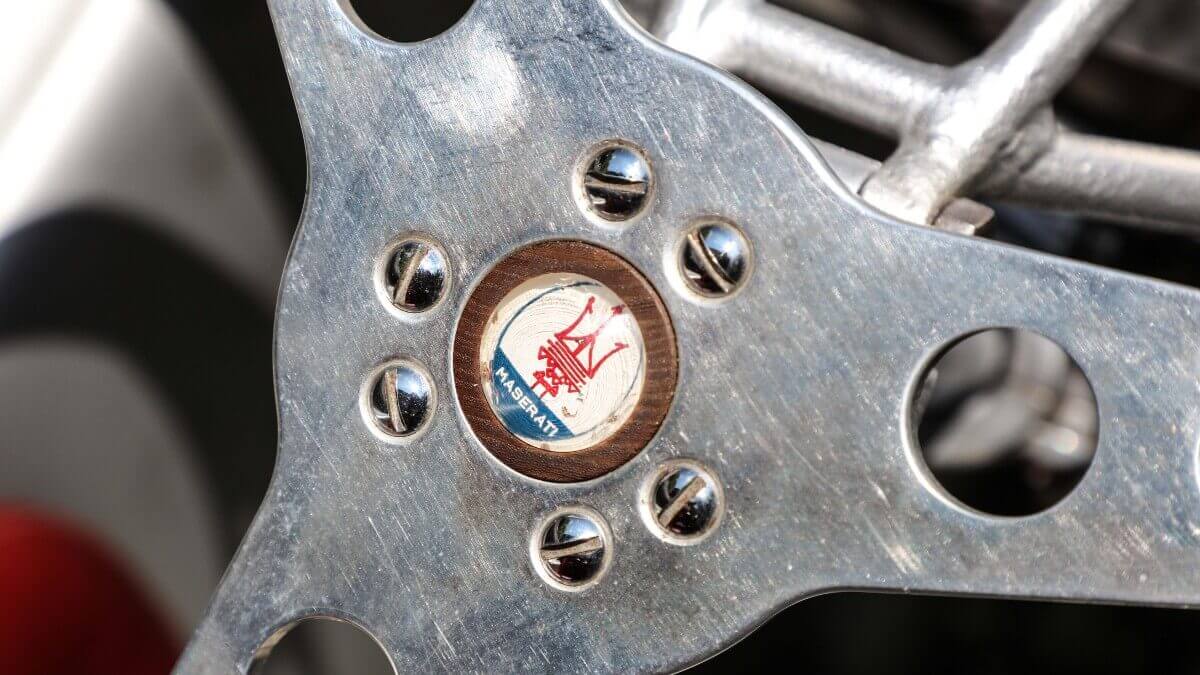 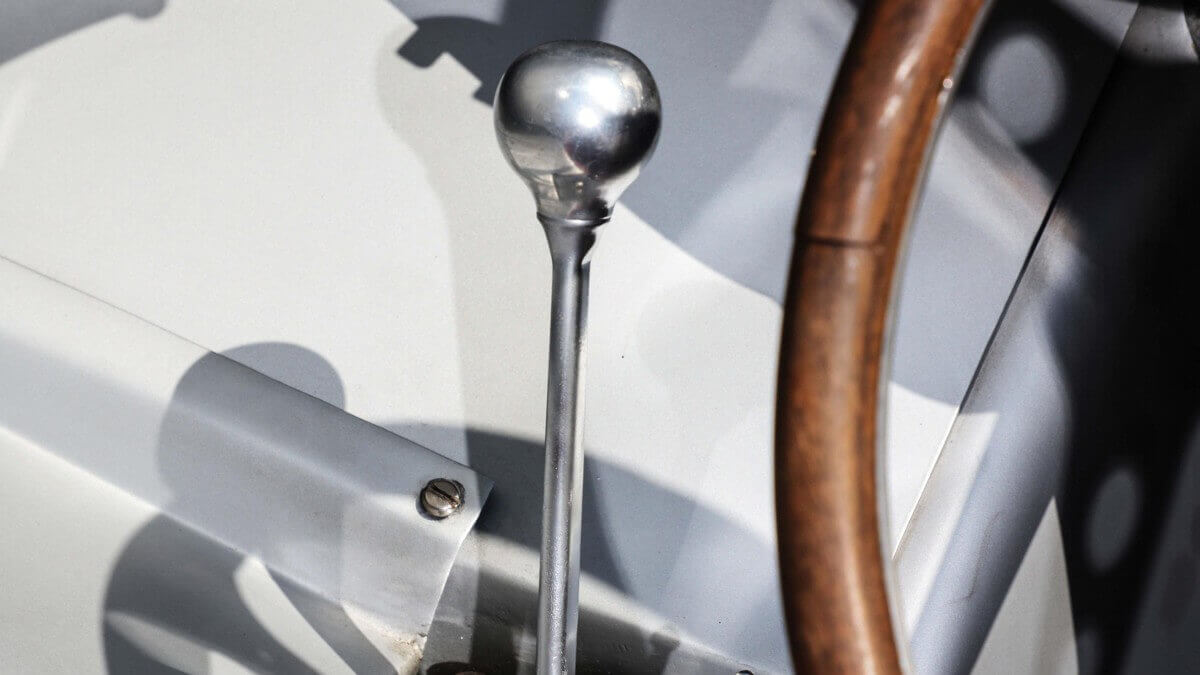 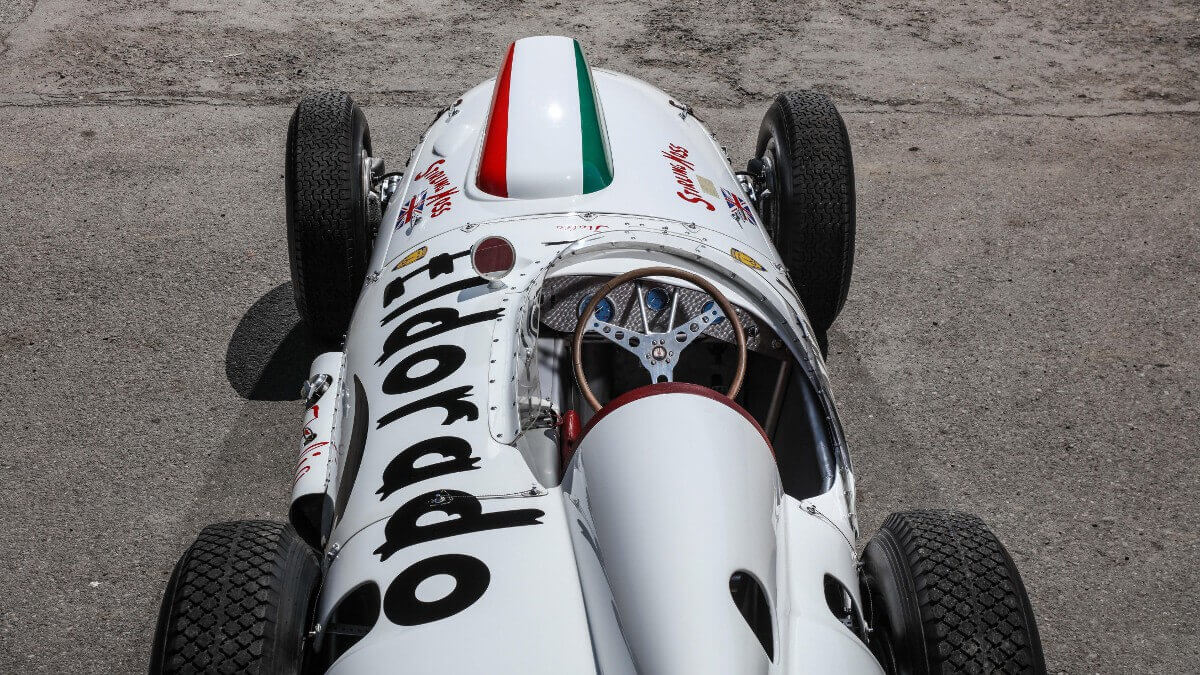 Maserati accepted the order from Gino Zapetti and produced a 420/M/58 with chassis number 4203 according to his specifications. As a drive unit they used a naturally aspirated V8 derived from the 450S with 4.2 liters displacement and 410 horsepower at 8,000 revs per minute. To ensure the best possible balance on the track of Monza, the engine block and the two-speed gearbox were installed offset by about nine centimeters to the left in the tube-frame derived from the 250F, while the driver’s seat slid to the right. The rear axle works without limited slip differential. As well as at the front suspensions, there are Halibrand magnesium wheels with 18 inch Firestone tires at the rear, each tire filled with helium. Overall the Maserati ‘Eldorado’ with its handcrafted aluminium bodywork by Fantuzzi weighs only 758 kilograms, allowing it to accelerate up to about 350 kph.

The cream-colored paintwork features curved ‘Eldorado’ letterings as well as the logo of the ice cream brand, a smiling cowboy. In addition to ‘Italia’ letterings, indicating both the ice brand’s and the car maker’s origins, British flags and the name of the driver who was to move the Maserati in the ‘Monzanapolis’ race can be found on the car: Zanetti got one of the best drivers of the time, Stirling Moss. Divided into a total of three scoring rounds, the event took place on 29 June 1958 in Monza. Moss finished fourth in first run, fifth in second run but failed to finish in the third one after the steering broke and he crashed into the guardrails. Due to the number of laps completed, he was still ranked seventh. Despite the large attendances both on the track and in front of the TV screens, there never was a repetition of this 500-mile race. The Maserati was instead slightly modified, for example by removing the rear fin and repainting it in red, and then used during the 500 Miles of Indianapolis 1959 where it didn’t qualify in the hands of gentleman driver Ralph Liguori. Today this special race car is perfectly restored and part of the Panini Collection near Modena in Italy.