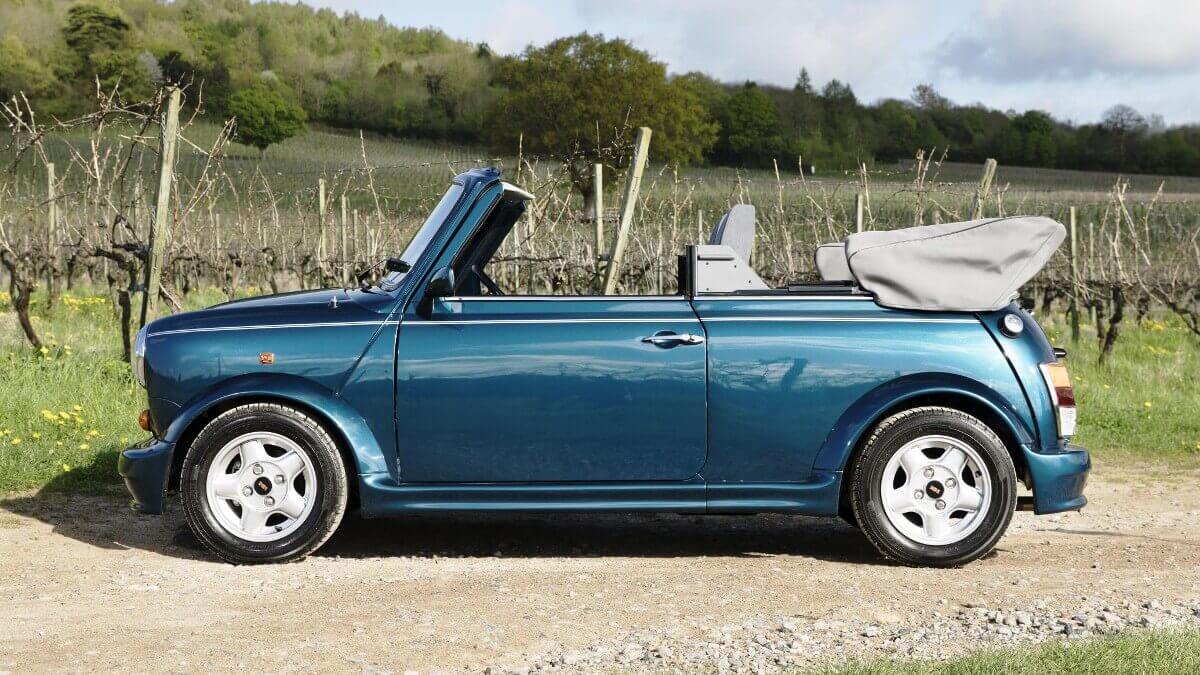 First Minis have been converted to Convertibles already in the 1960s, but those are rare cars. Best known are the few cars from Crayford Engineering. In 1991 Rover showed the first Mini Cabriolet as a teaser for following things. The first 75 copies have been produced in a strange way: Mini sent already produced cars to German car dealer Lamm in Achern, where the team cut the roof of, fitted a new folding roof and additional bars under the car to stiffen it up. It also got new upholstery for the seats.

Lamm converted first Minis already within the 1980s but now received the official order from Rover. Those 75 official cars all got a paintwork in ‘Cherry Red’, were right hand drive and only available at 12 selected Rover dealers in Great Britain to analyse customer interest in this version. It was big enough, all cars have been sold within a month. So RSP (Rover Special Products) decided to build a Mini Convertible themselves in low-volume. Design was taken from the Lamm car, but the lost stiffness from removing the metal roof was fought by adding additional sills. Those reduced the footwell inside the car. Also RSP closed a gap under the rear seats and searched for other points to fix the seatbelts. The newly developed Mini version debuted at NEC Motor Show 1992 and arrived at dealers worldwide in 1993. Now it was available either in ‘Nightfire Red’ or ‘Carribean Blue’, from 1994 on also in ‘British Racing Green’. While all red Convertibles – Lamm and Rover cars – received a red softtop, the other two colors have been fitted with a grey roof and persenning. Lamm developed a matching hardtop for the cars to better their usability in winter time. 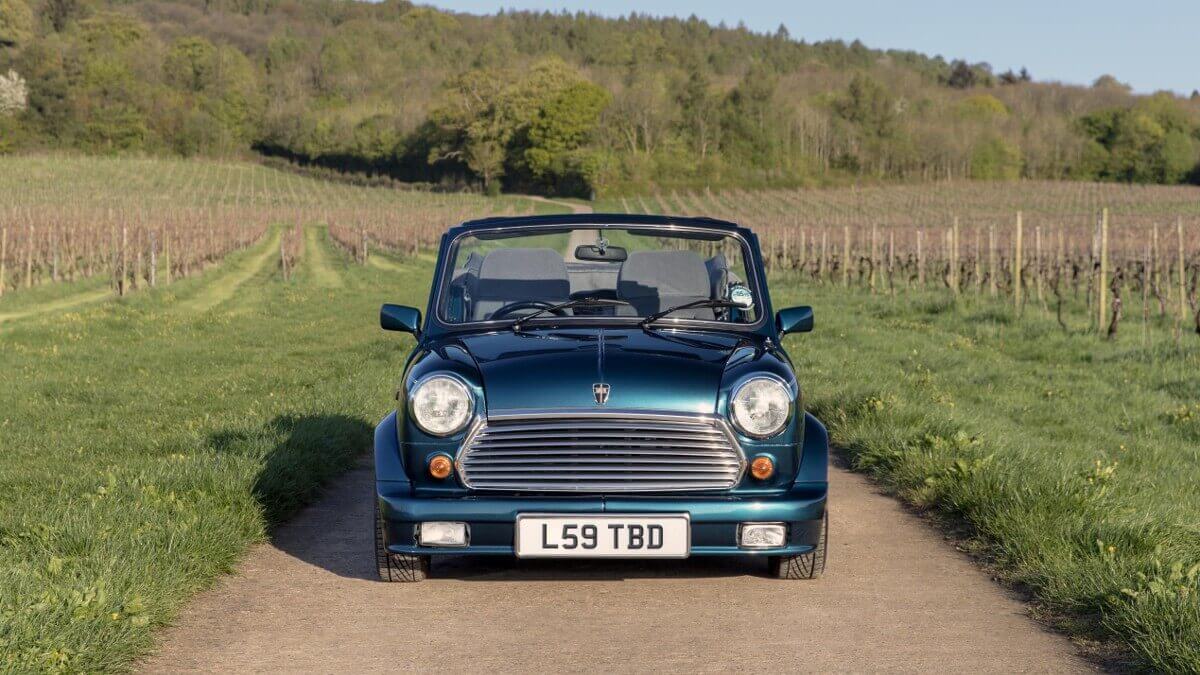 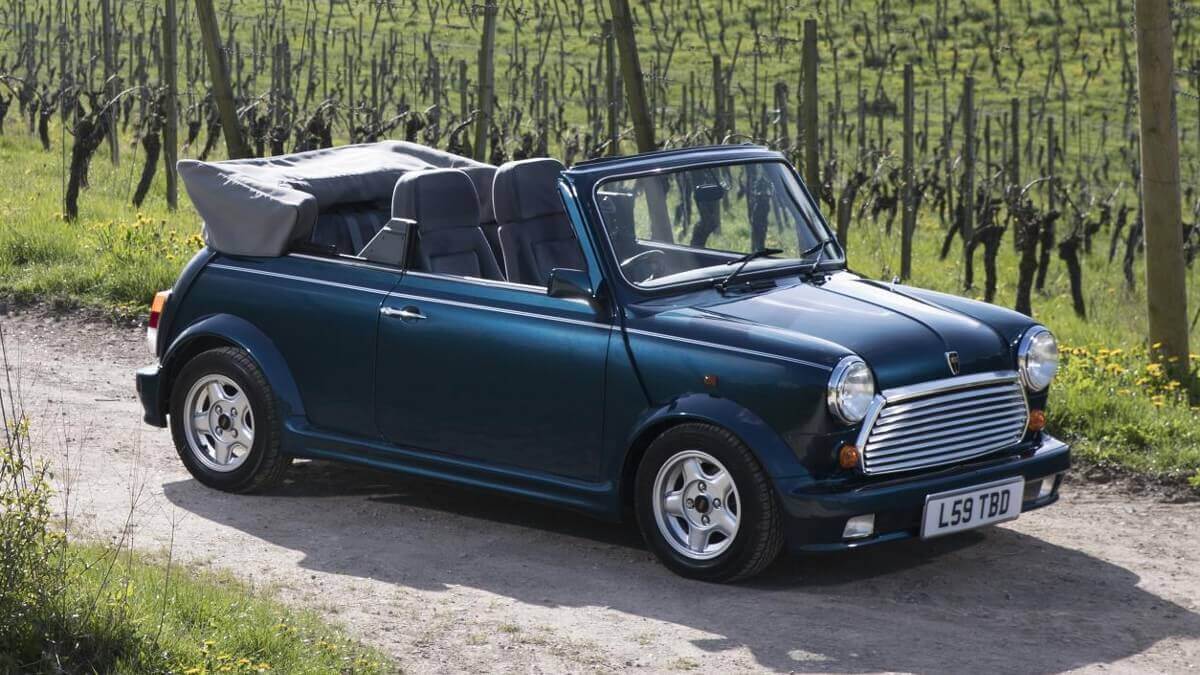 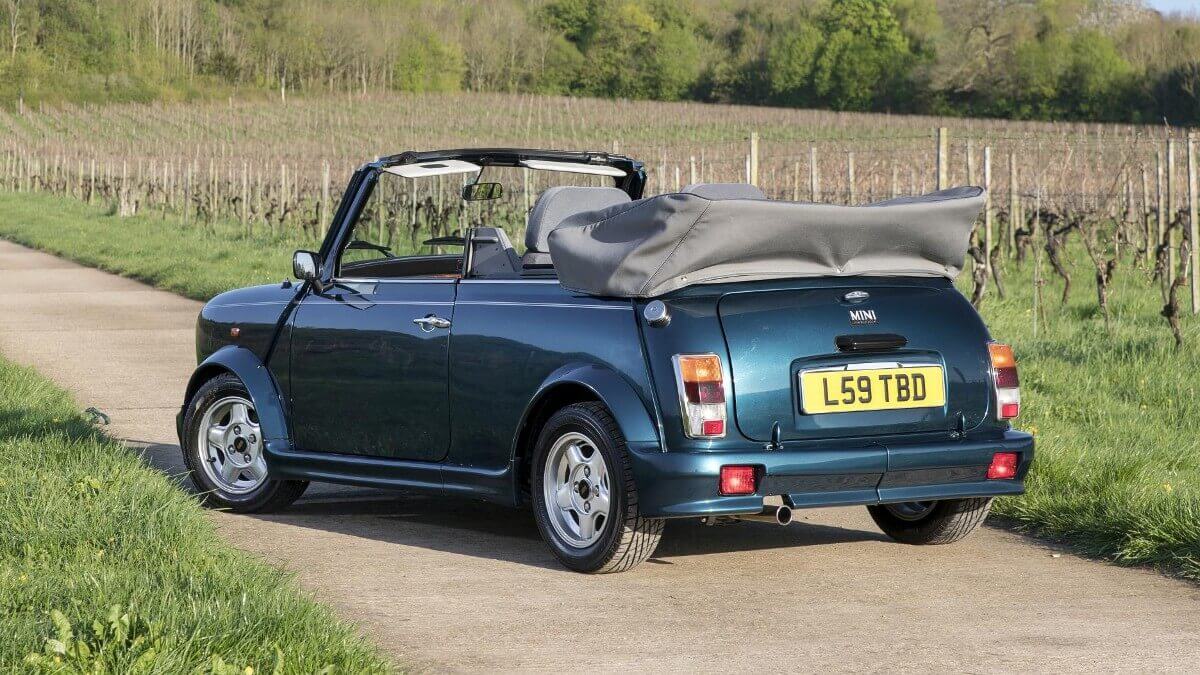 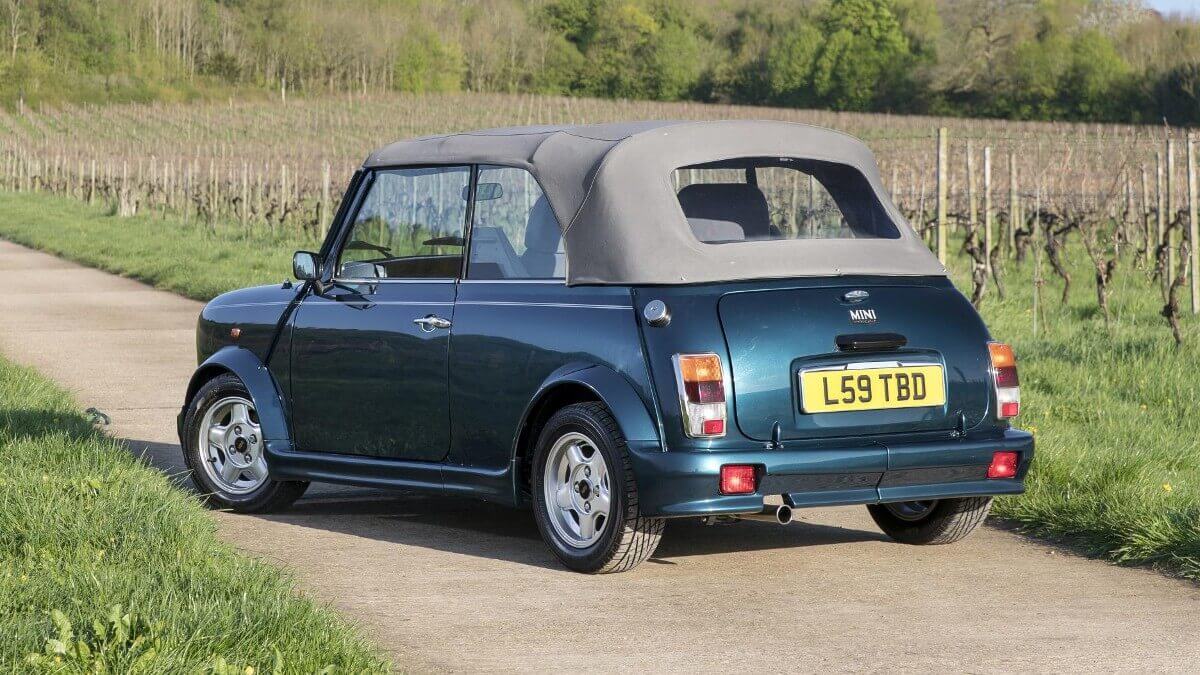 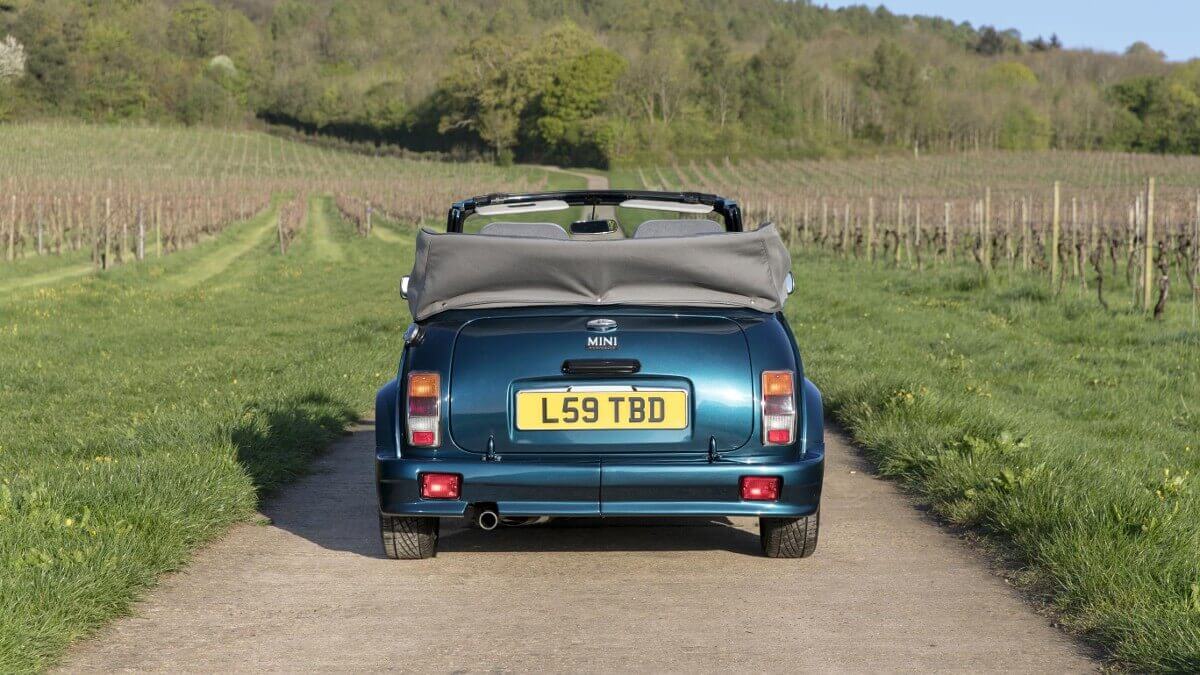 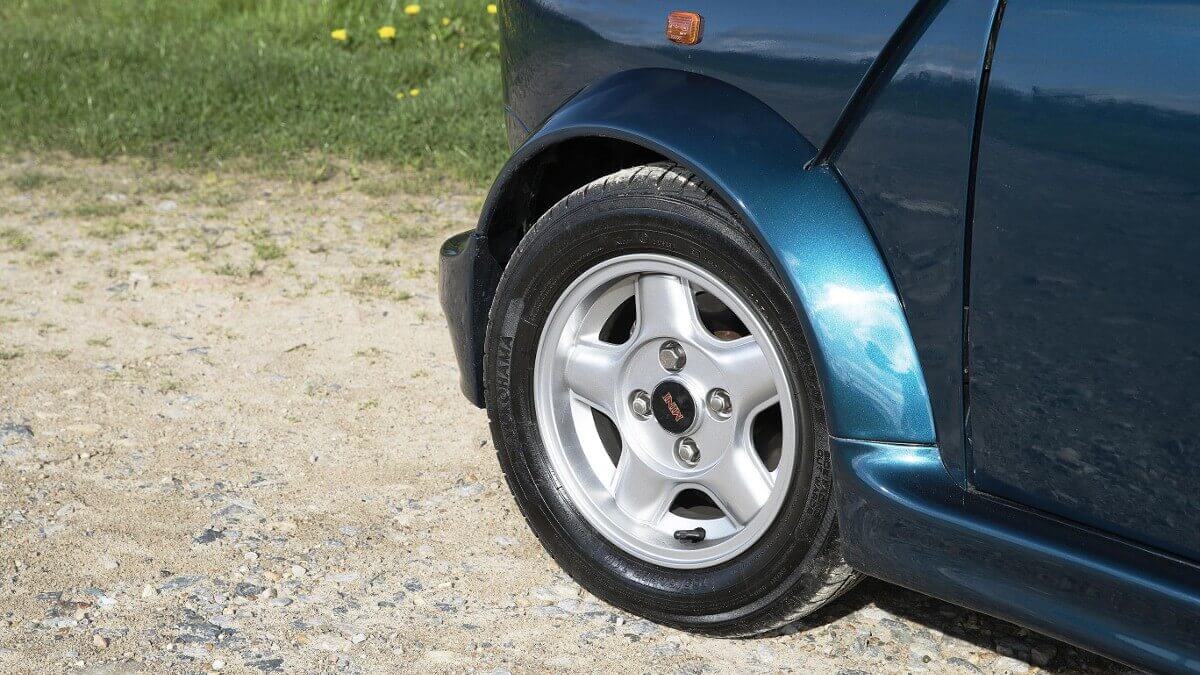 From new the Rover Mini Convertible wasn’t a cheap car. The first 75 copies were 12,250 GBP, later Rover cars were 11,995 GBP while a normal Rover Mini Sprite 1.3 Mk VI with 53 PS costed 5,295 GBP and the Cooper version was 7,195 GBP. All Convertibles have the 1.3 litre engine with 63 PS from Cooper variant. Also a bodykit was fitted to those cars, consisting of 12 plastic parts including wider fenders and a front spoiler with integrated fog lights. While Lamm used 11 inch wheels, the later Rover cars showed 12 inch rims with tires in 165/60.

Inside the Rover Mini Convertible shows a bit of luxury with a walnut dashboard. Behind the steering wheel are a rev counter, a speedo, a clock and a combined dial for water temperature and fuel. Driver and co-driver take seat in Cobra sports seats, which are upholstered with grey cloth as are the smaller rear bench and the door cards. The upper parts of the doors show walnut as well. 1996 production stopped after 1,081 cars when the Mk VII Mini with Multi Point Injection (MPI) came along. If this number contains the 75 Lamm cars or not can’t be said for sure.