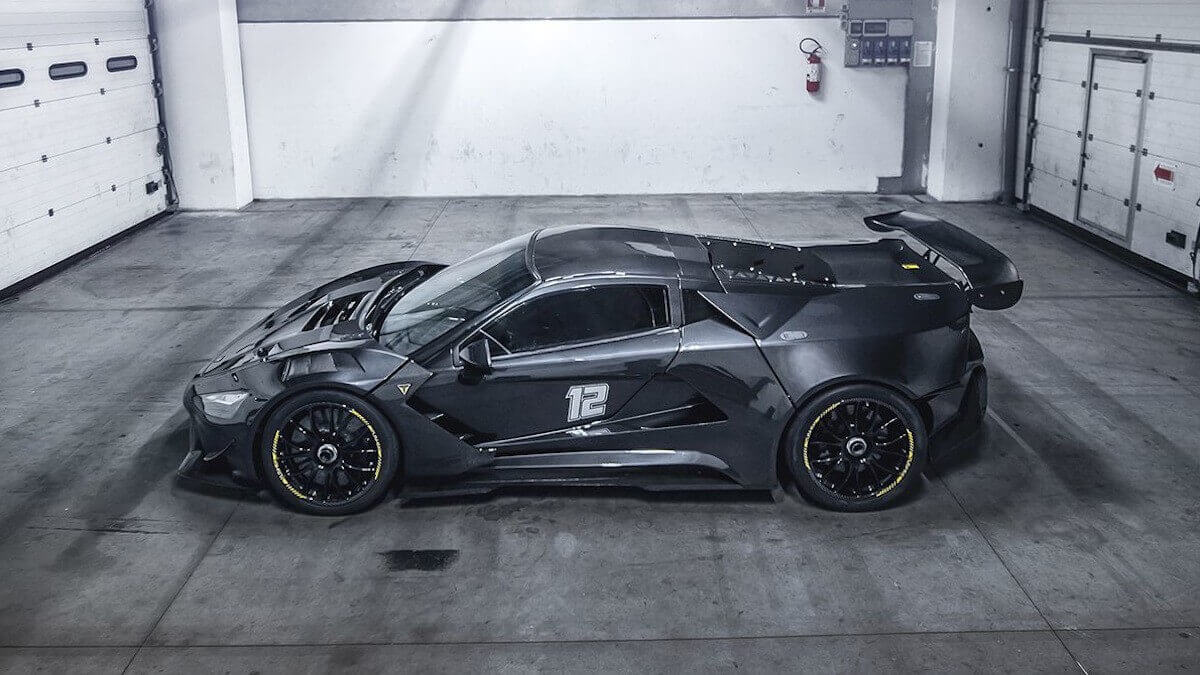 Around company founder Aljosha Tushek, sports cars have been produced in Slovenia since 2004. Did you know about it? Probably not. Aljosha Tushek started his career as a racing driver in go-karts and on motorcycles when he was 14 years ols. As soon as he had a driving license, he completely shifted his interest to cars, became Rookie of the Year in the Fiat Seicento Cup and finally ended his racing career in 2003 in the factory supported Target Team with a Citroën Xsara Group N in the Slovenian Hillclimb Championship. He then devoted himself entirely to the dream of building sports cars in Slovenia that could compete with the world’s best. First of all he acquired a manufacturing license for the K1 Attack from Slovakia. In 2008, he further developed this base car into the Tushek TS 500 Renovatio, where the name suffix ‘Renovatio’ means ‘rebirth’. Approximately 70 percent of all components were modified or exchanged compared to the base.

The 4.2-liter V8 engine from Auto was chosen as the drive system and delivered 450 hp, that met a kerb weight of less than 1,100 kilograms. From 2012, the newly developed Tushek TS 600, which was also shown at Top Marques Monaco in 2014, debuted. Since then, the development team has been working on a true supercar in the form of the new TS 900 H Apex, which will now be shown for the first time outside Slovenia during the Salon Privé in the UK. Visually, the latest model continues the design language of its predecessors. However, a lot of new technology is being used under the body. Tushek provides a hybrid drive with one electric motor per front wheel and a 4.2-liter V8 FSI engine with four valves per cylinder, two overhead camshafts per bank and dry sump lubrication at the rear behind the passengers. The turbocharger adds 0.7 bar boost pressure and increases the power output of the combustion engine alone to 505 kW/687 hp and a maximum torque of 690 newtonmeters. Added to this are 480 kW (653 hp) and 1,000 newtonmeters of torque at the front axle. 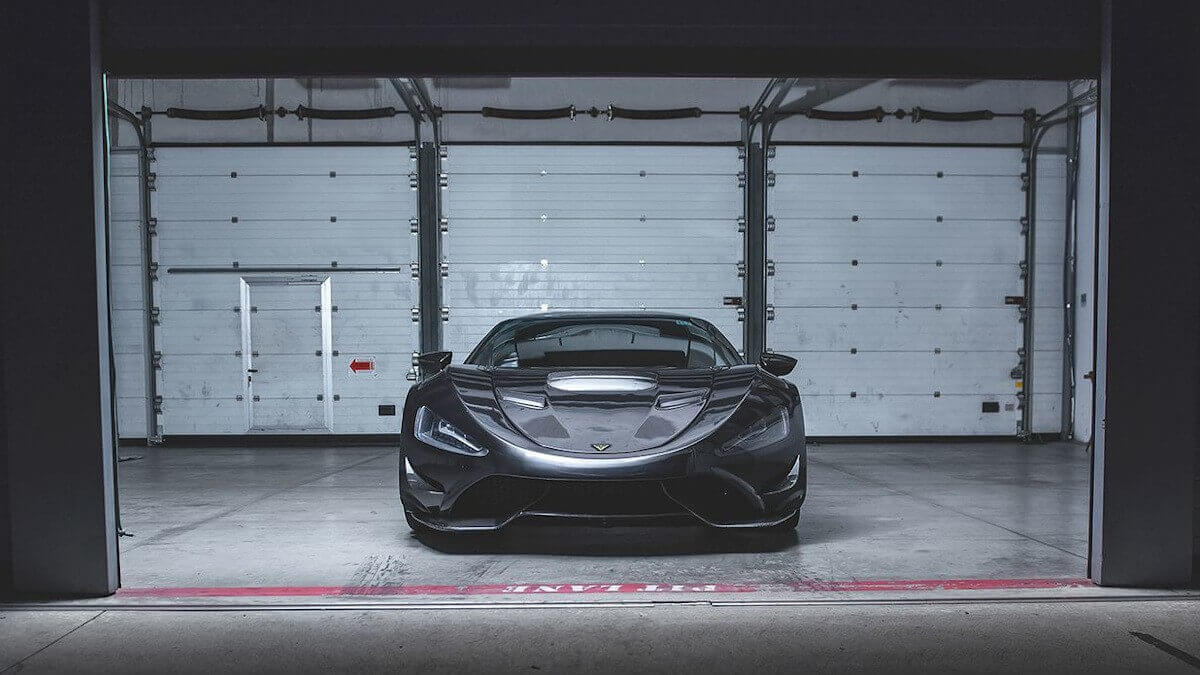 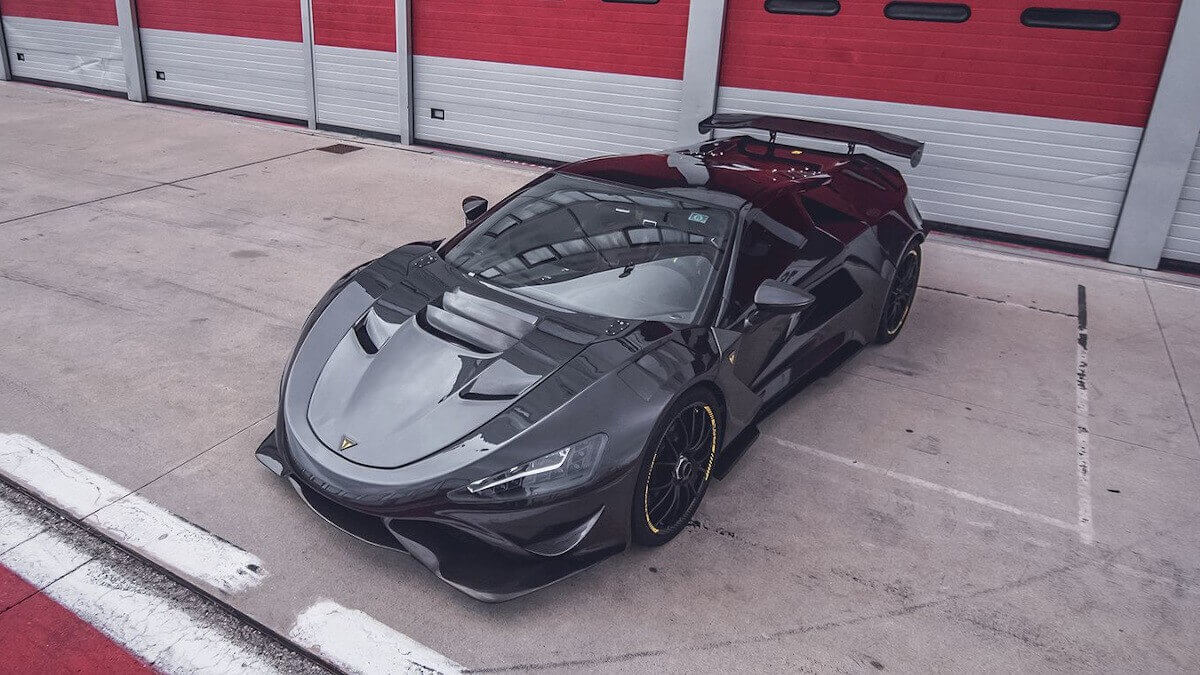 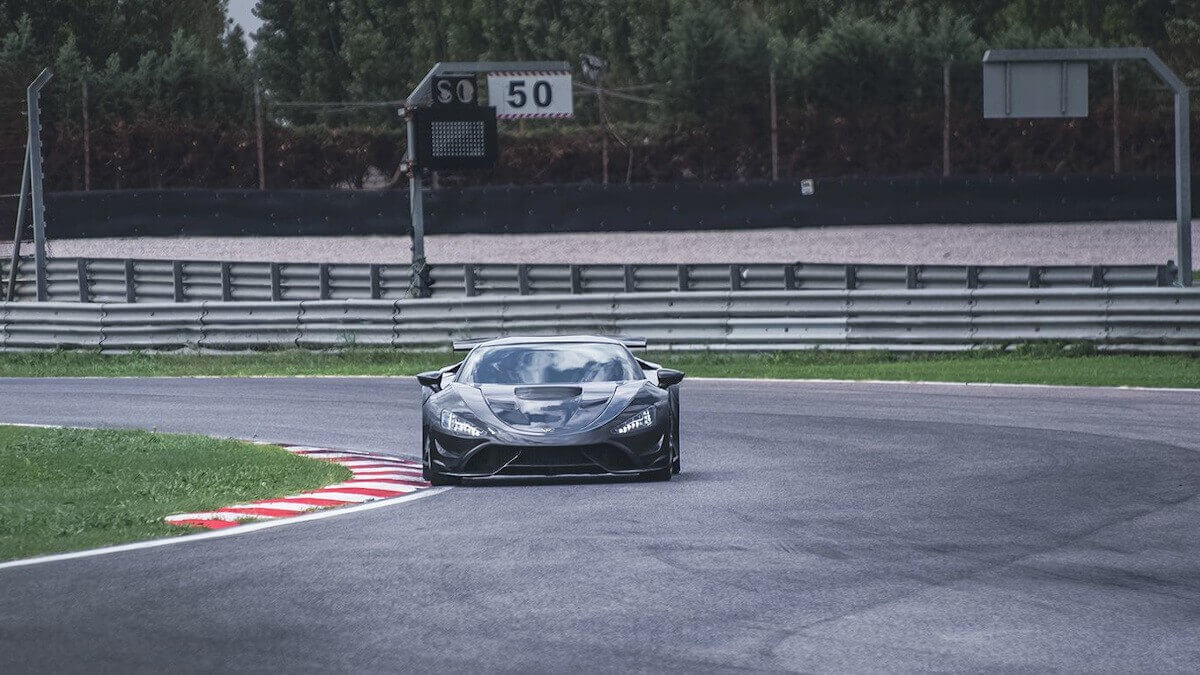 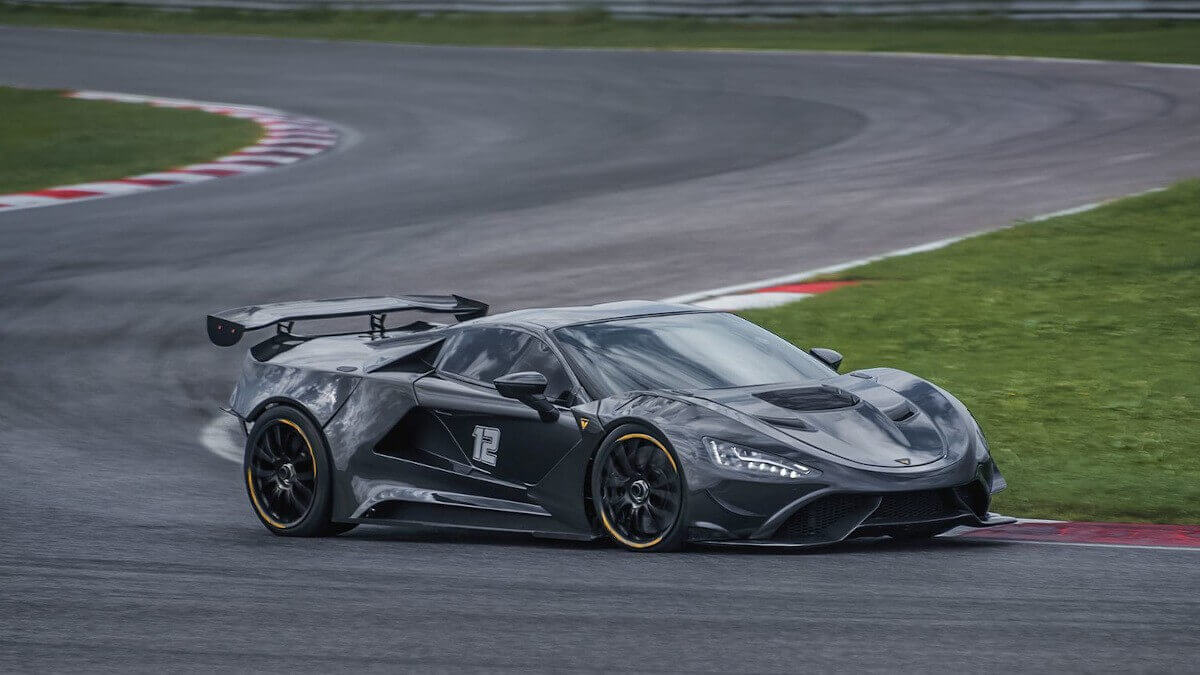 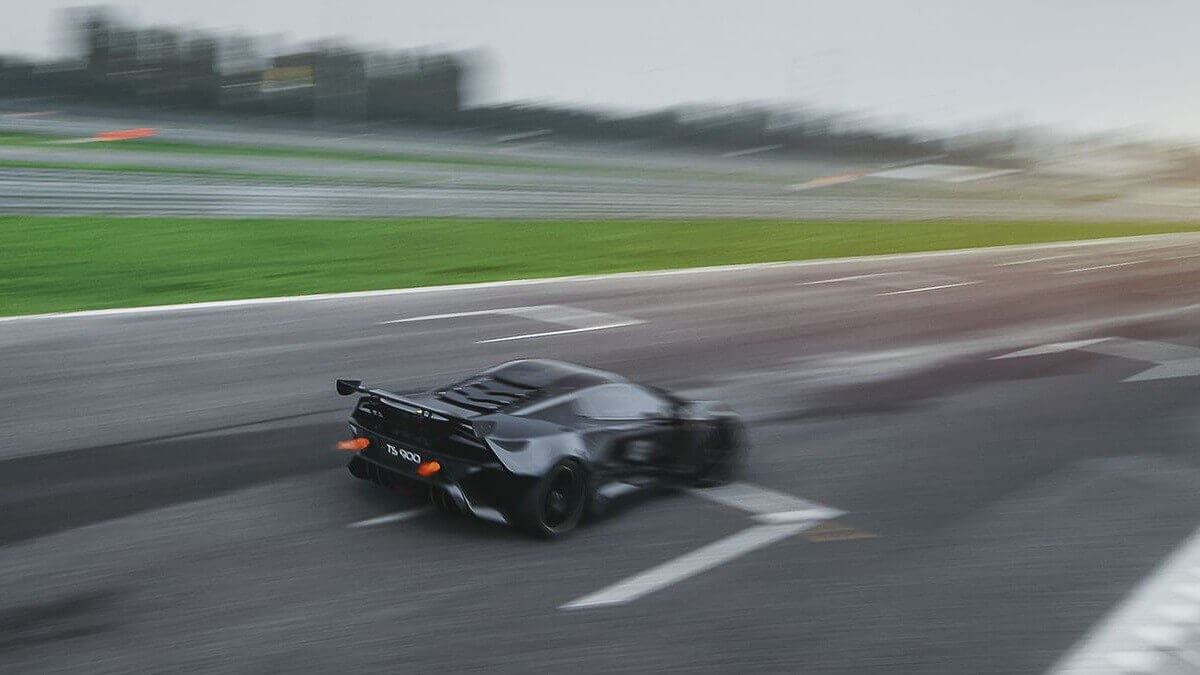 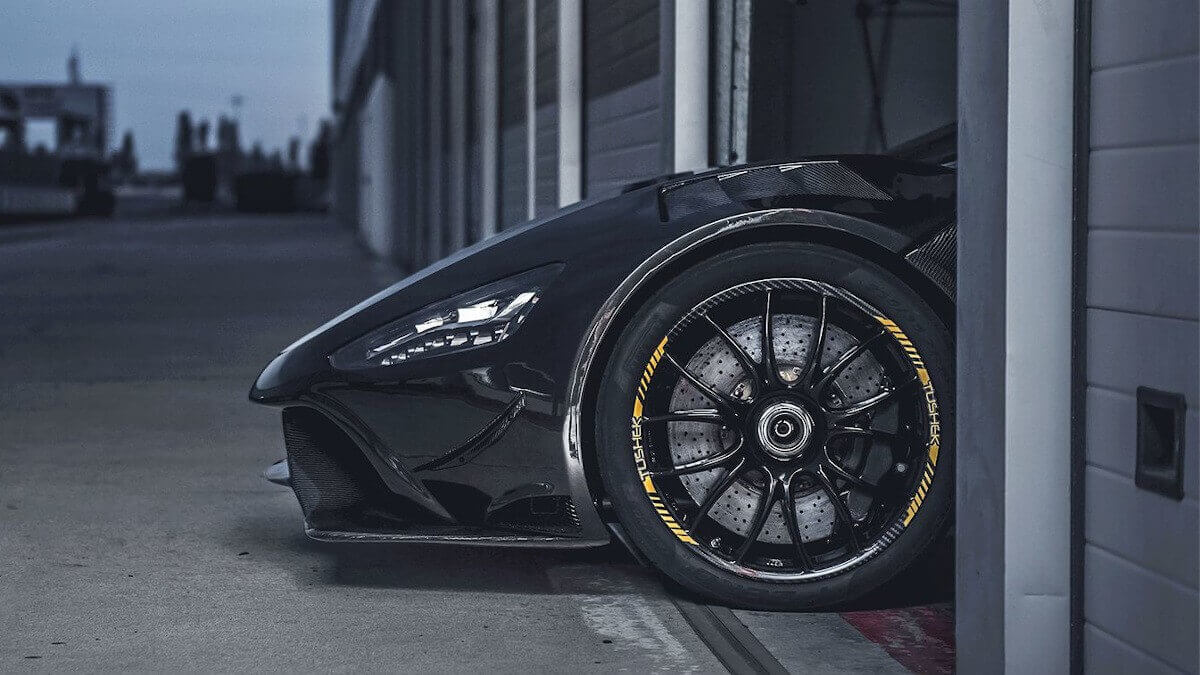 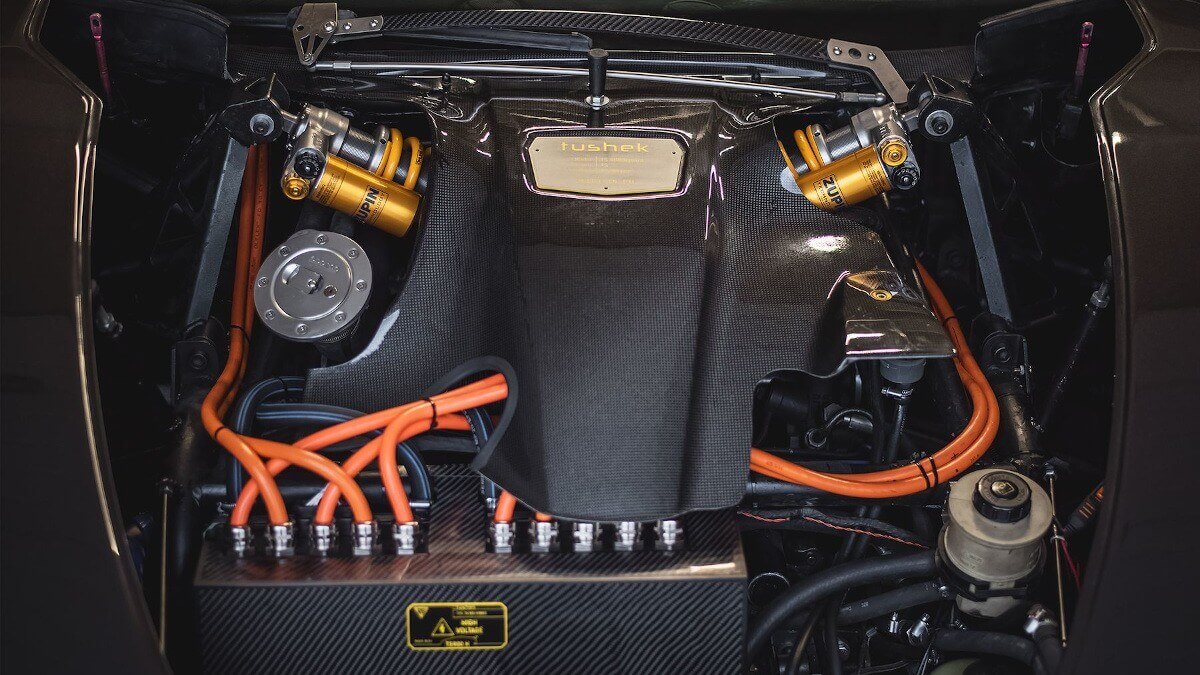 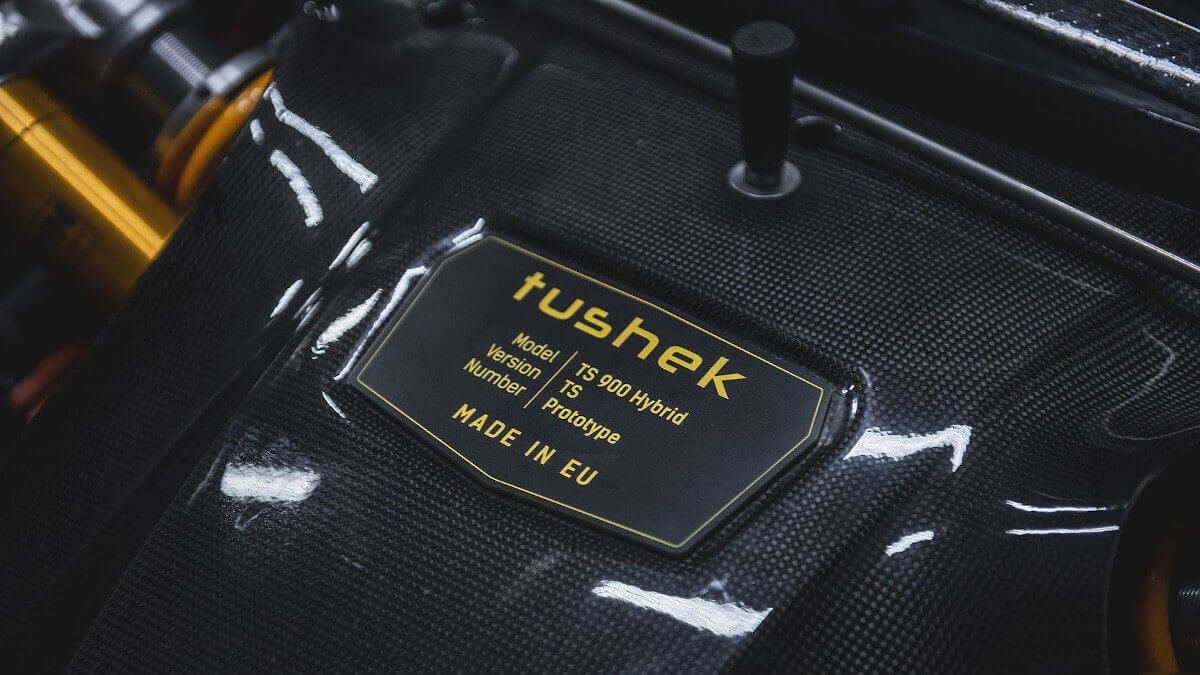 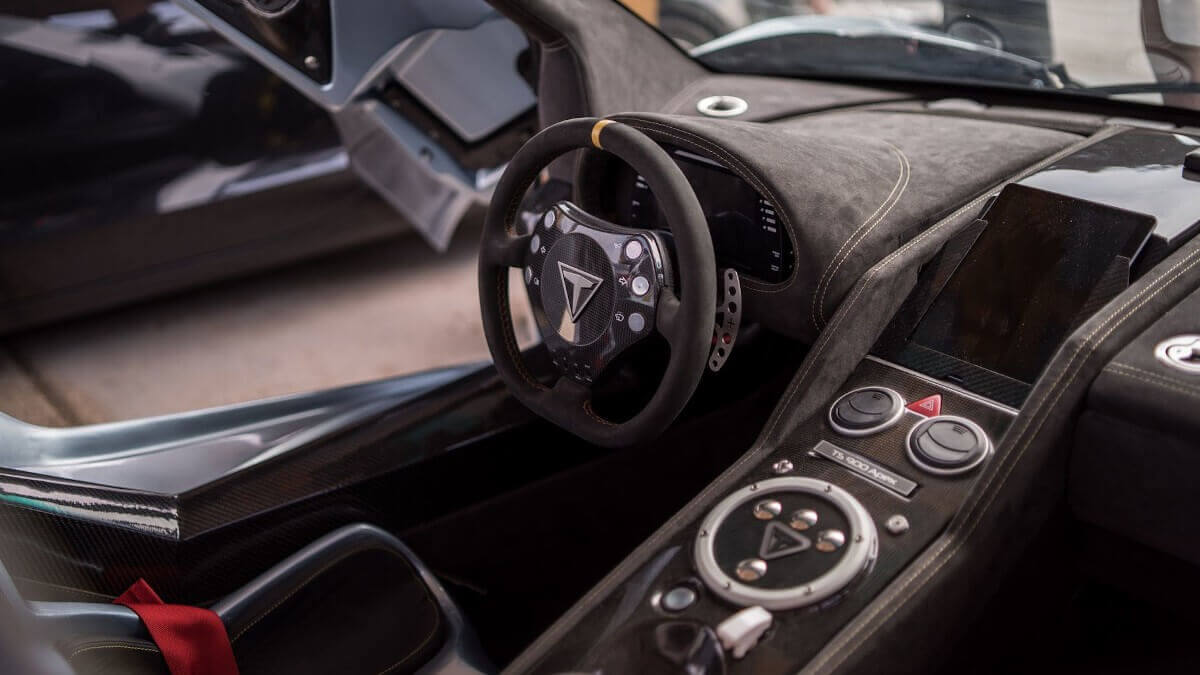 With the electric motors and the two 7.5 kWh batteries alone, a purely electric range of around 50 kilometers is possible. The complete electrical drive system consisting of batteries, cables and motors weighs only 85 kilograms. With a combined total output of 1,340 hp and 1,600 newtonmeters of torque in combination with a sequential six-speed gearbox, Tushek promises a topspeed of 236 mph and an acceleration time from standstill to 62 mph (100 kph) in 2.5 seconds. The new TS 900 H Apex is 4.39 meters long, 2.02 meters wide and 1.11 meters high, although the kerb weight of 1,410 kilograms remains pleasingly light for a hybrid vehicle. Large ceramic brake discs with six-piston calipers at the front and four-piston calipers at the rear, which are supplied by Brembo, ensure a deceleration in keeping with the standard. The ABS is adjustable in 12 stages.

The bodywork is made of pre-impregnated carbon fiber and is moulded to a cW value of 0.36. Above the heads of the occupants, a Targa roof can be removed to get some fresh air into the cockpit. 19-inch BBS forged rims fill up the wheelarches. They are covered in Pirelli P Zero Trofeo R tires. So far Tushek hasn’t provided any information about the start of production or the base price of the new TS 900 H Apex.