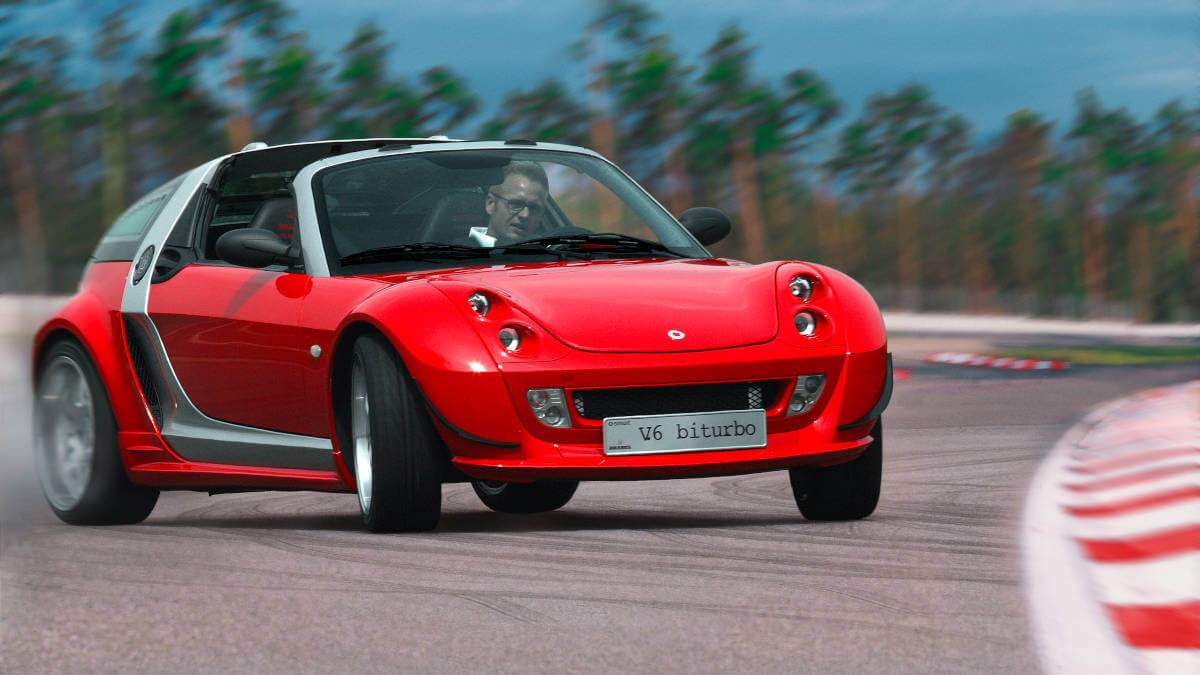 Do you still remember the Smart Roadster? The manufacturer of very small cars first showed a concept car of this kind at the IAA (Frankfurt Motor Show) in 1999. Their idea was to offer the greatest possible driving pleasure with compact dimensions and thus to cleverly expand the model range. In addition, the idea was quickly developed further to the extent that two different body variants were to be offered. To this end, the Roadster Coupé with a glazed rear section was shown as a second concept car at the 2000 Paris Motor Show. This section increased the trunk space by 103 to 189 liters, making the car a little more suitable for everyday use. Both versions went into series production from April 2003. However, sales figures never reached the high expectations. This was due to the high price, the relatively low power (45 kW/61 hp or 60 kW/82 hp, later also 74 kW/101 hp from Brabus) and the automated, sequential six-speed gearbox. This had the now almost legendary ‘Smart second to think’ with every gear change and thus contradicted any idea of sporty driving pleasure.

Many roadster enthusiasts also missed the real open-air feeling, as only the small roof section above the two passengers could be opened. Strictly speaking, this made it more like a targa than a roadster. Even the performance-enhanced Brabus variants with larger wheels and two central exhaust pipes could do little to change the low level of interest. This was mainly due to the base price of € 24,950 (Smart Brabus Roadster) and € 26,570 (Smart Brabus Roadster Coupé). In the basic version with 61 hp, the price list started at € 14,990. It came as it had to: the Board of Management of the then DaimlerChrysler Group decided to discontinue production at the end of 2005. 43,091 units had been built by then, but around 11,000 of them were sitting on the stockpile unsold. Through various special edition models, some of which created together with Brabus, Smart gradually sold all the cars until the beginning of 2008. 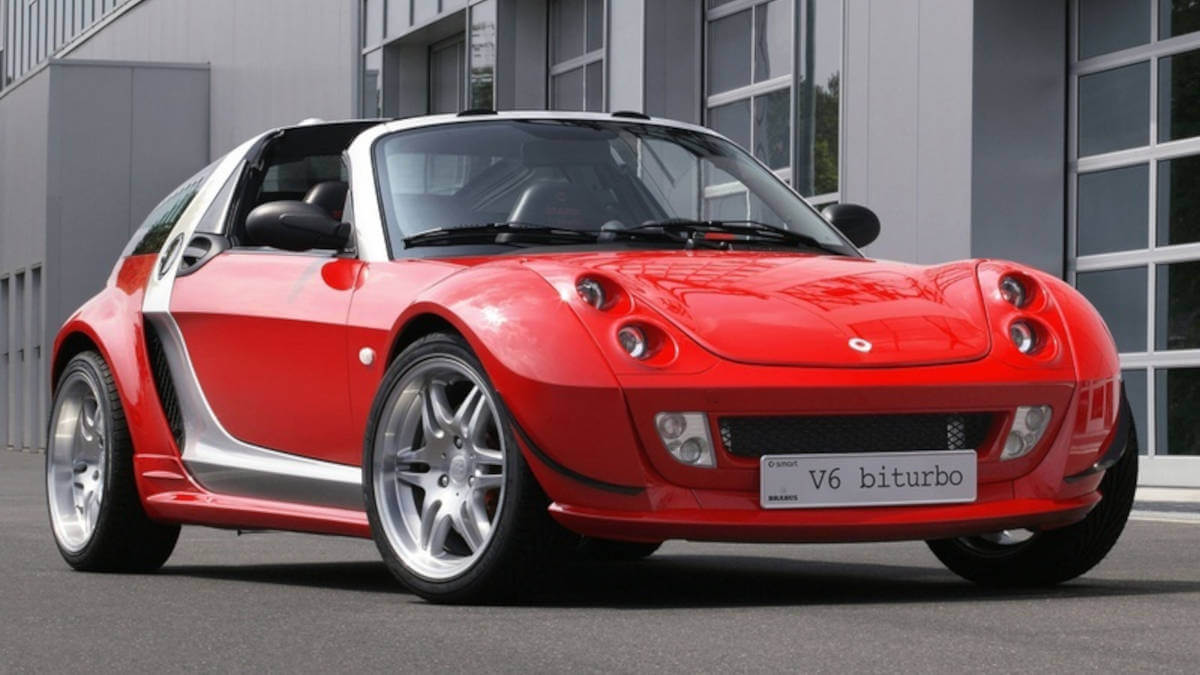 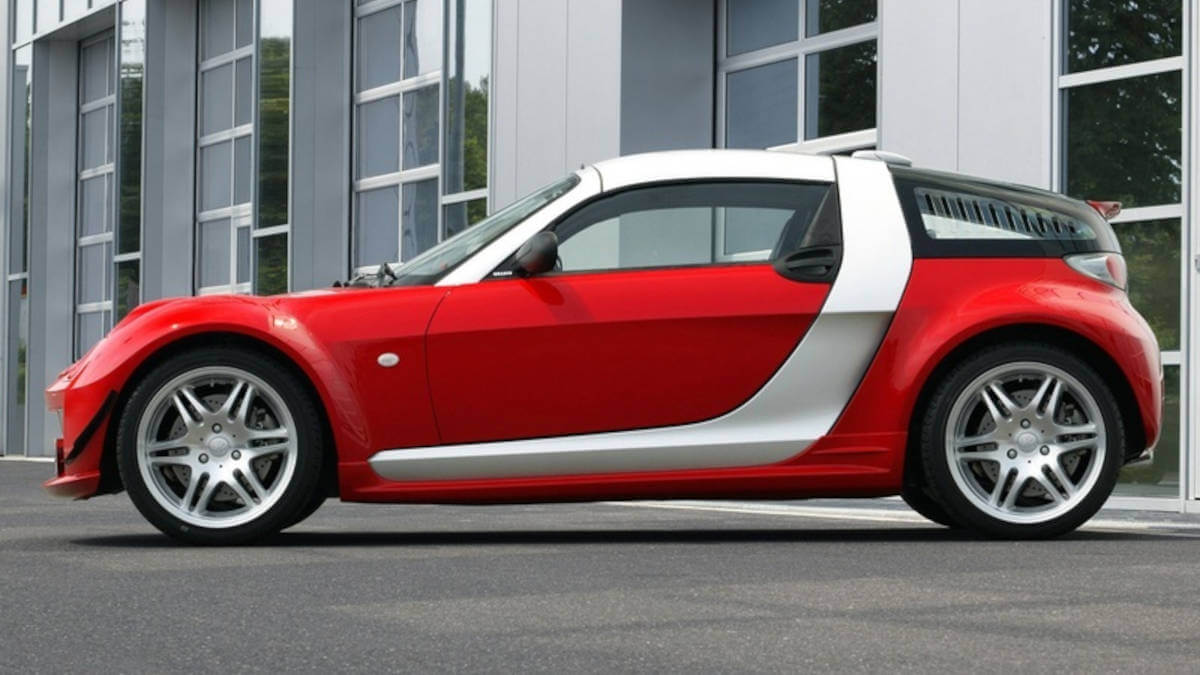 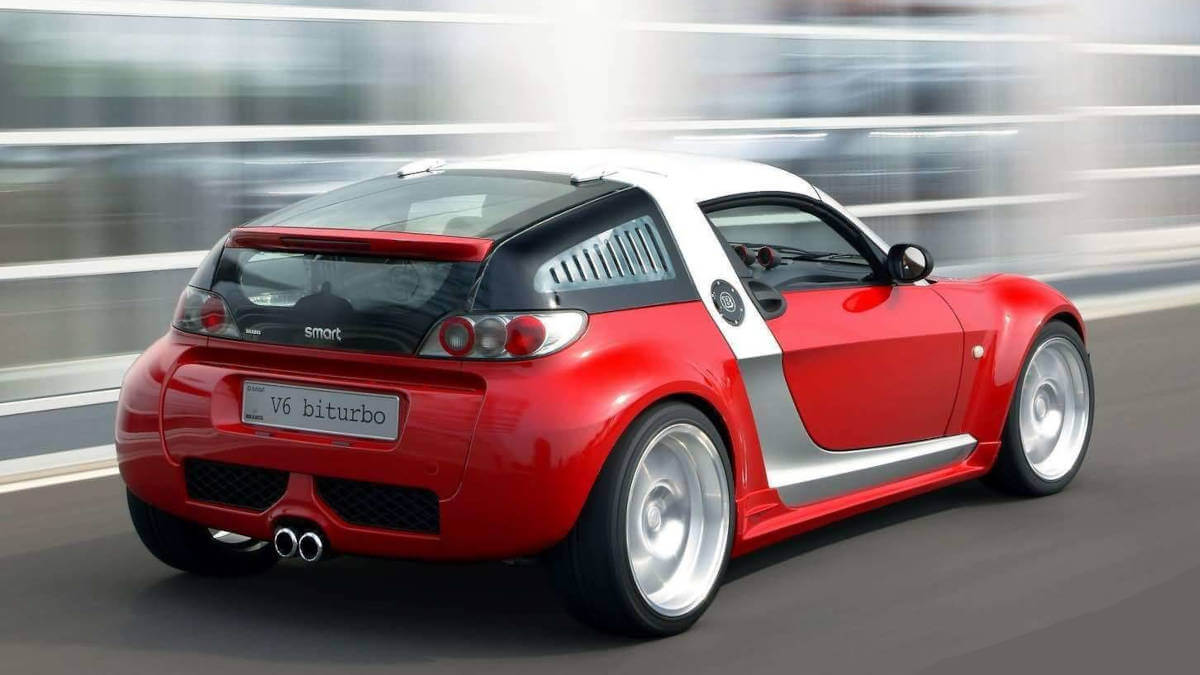 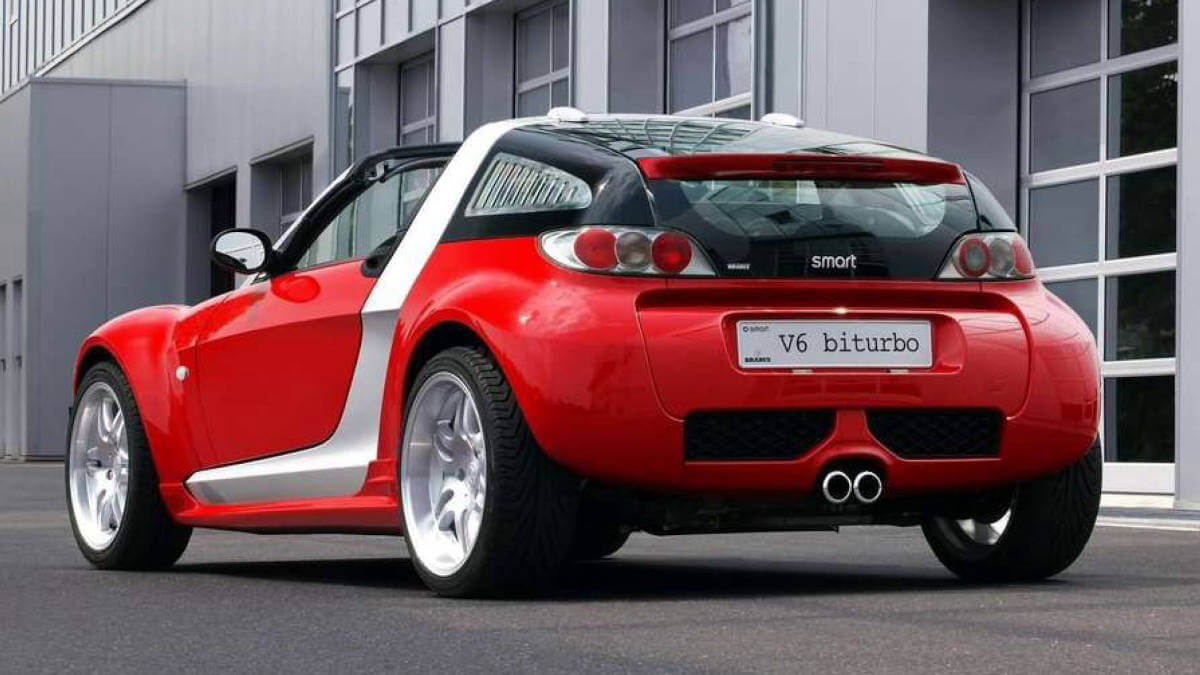 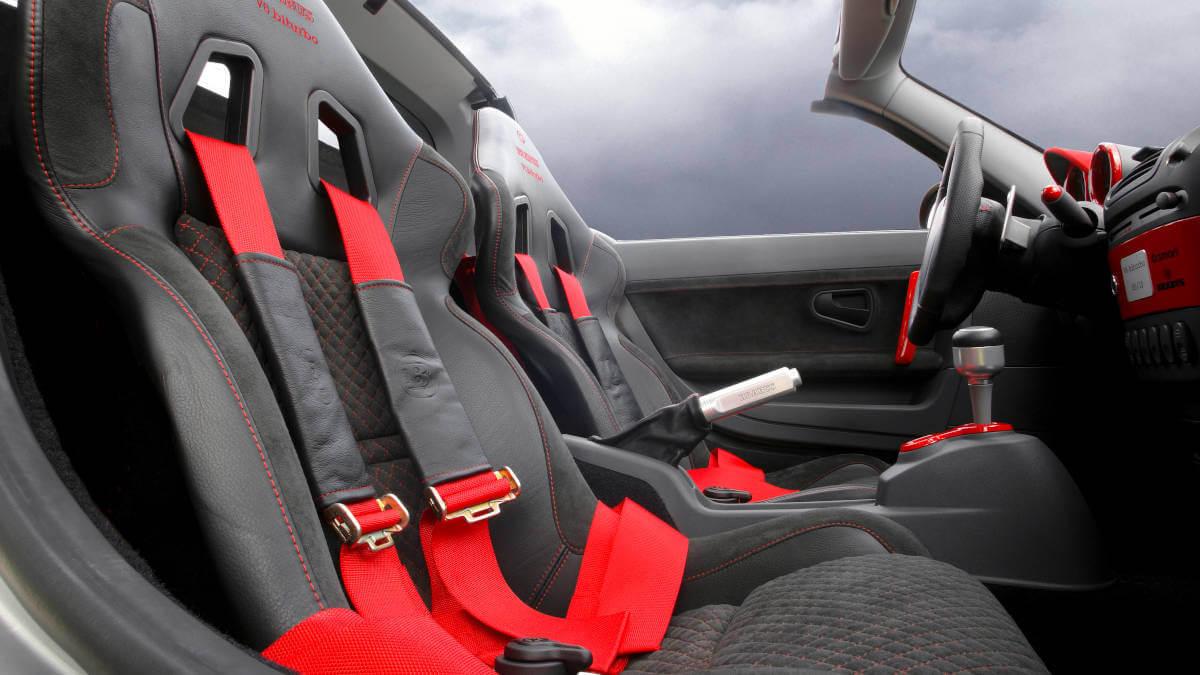 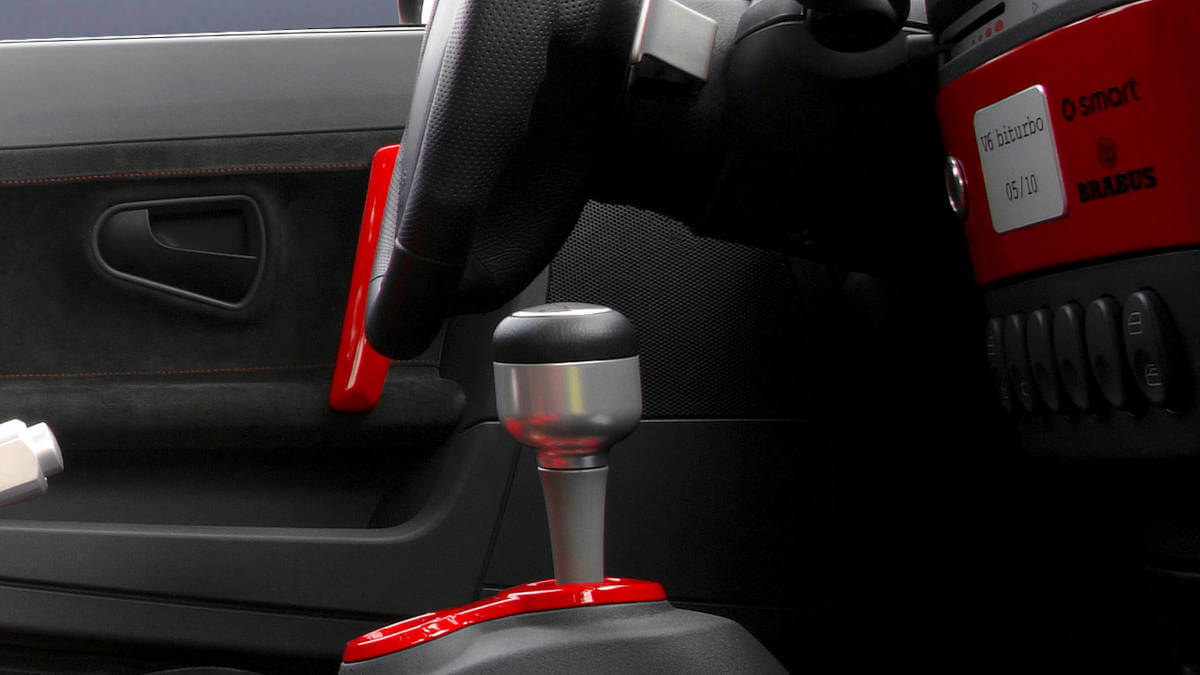 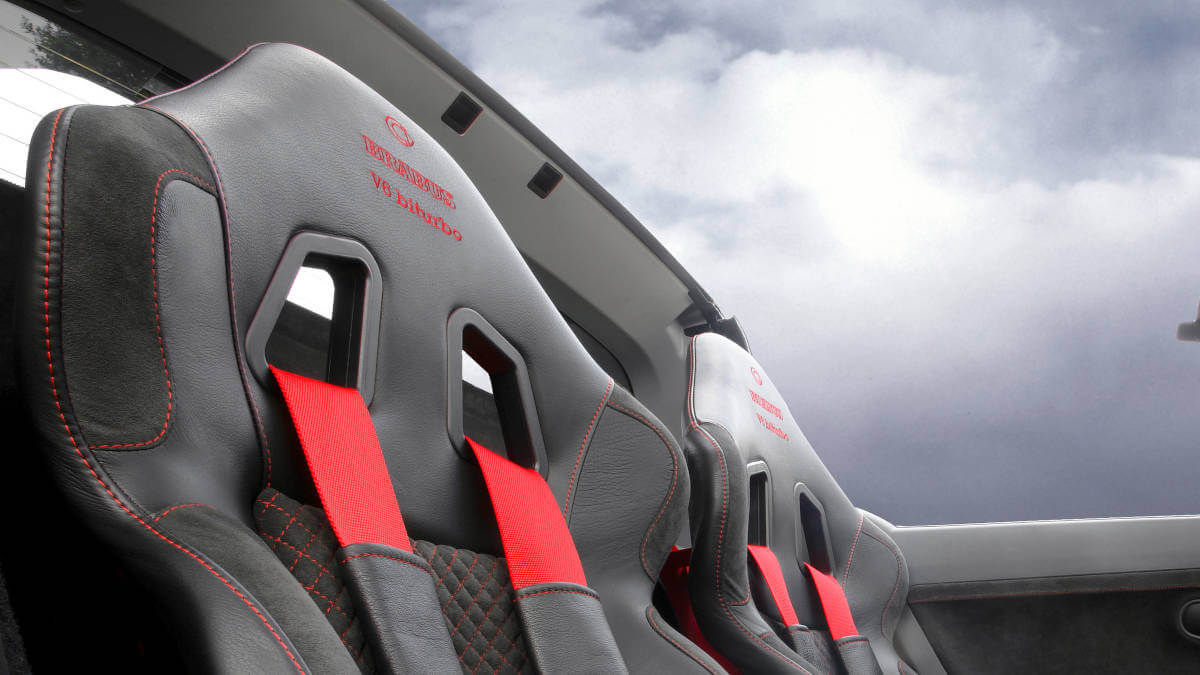 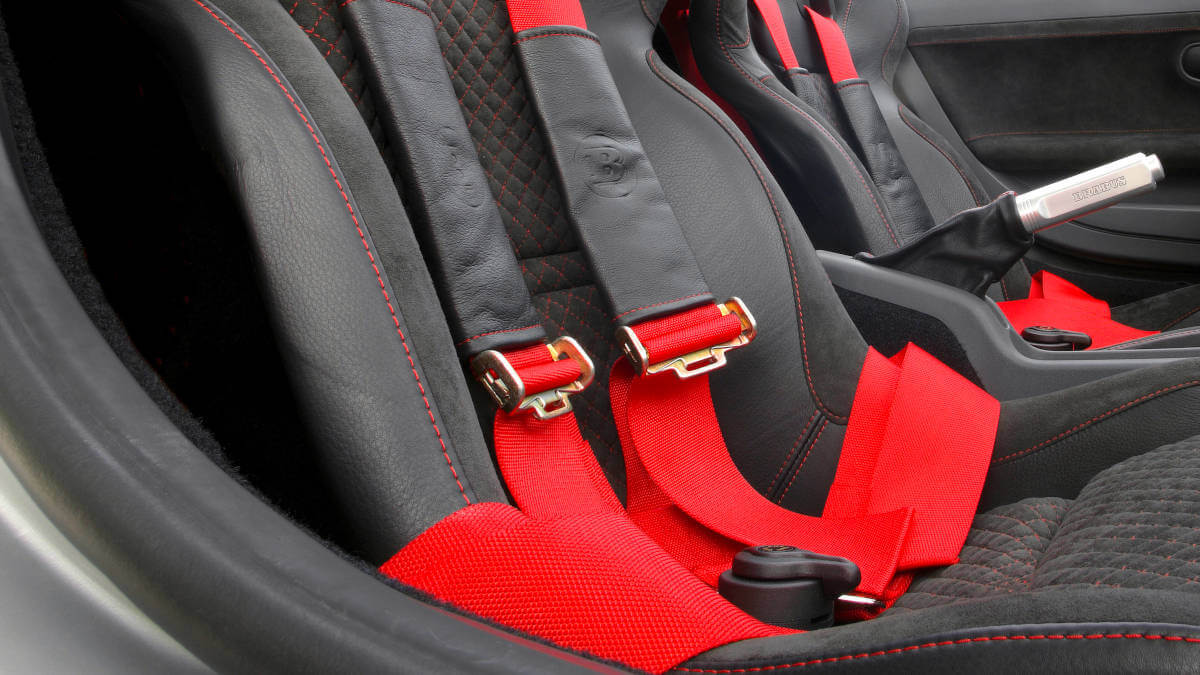 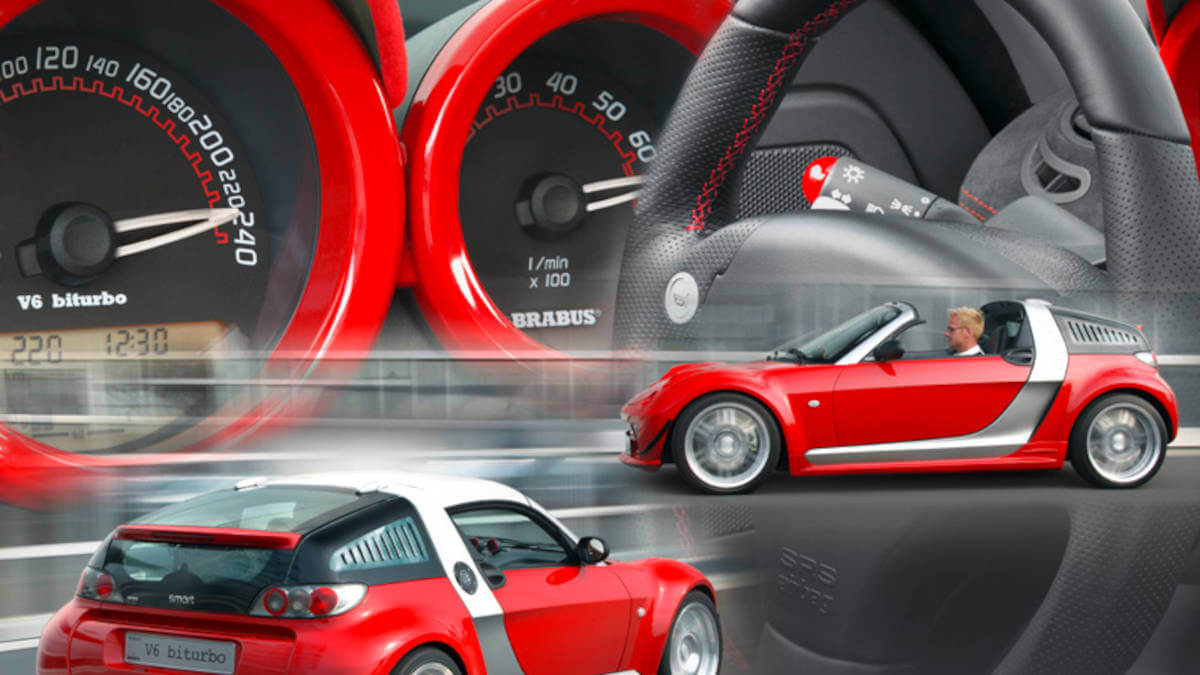 However, there were ten vehicles that were hardly known outside the Smart fan scene. They may be considered true ‘Secret Classics’. Right at the time of the car’s launch, Smart worked closely with Mercedes-Benz engine development and tuning company Brabus to demonstrate what could be technically possible. Two Smart three-cylinder engines joined together to create a V6 powerplant with a common crankcase. This had a displacement of 1,396 cc. Both banks of cylinders were each pressurized by a turbocharger. This increased output to 125 kW/170 hp and 220 Nm of torque. Unlike all other Smart Roadsters and Roadster Coupés, power was transmitted here via a six-speed manual transmission from the ForFour CDI, which was subsequently automated and limited to five gears. The ten prototypes reaches 62 mph in 5.8 seconds and a topspeed of 140 mph.

Complete conversion of the rear end

For the significantly larger powerplant, the entire rear end below the bodywork including the rear suspension had to be completely rebuilt. The 50-liter plastic gasoline tank was obtained from motorsport accessories and relocated under the front hood. To cope with the extra power, disc brakes were also fitted to the rear axle. While power steering, air conditioning, ESP and traction control were omitted for reasons of space and weight, ABS remained on board. On the outside, all ten prototypes of the Smart Roadster Brabus V6 Biturbo were painted in the Ferrari color ‘Rosso Corsa’ with a silver tridion frame around the passenger cell. Air outlets were integrated into the rear side windows of the Roadster Coupé. Additional aeroflics at the front and a modified rear spoiler provided more downforce.

Only three of ten cars left

Inside, there were sports seats with black diamond quilted leather and red stitching, six-point seat belts and elements painted in body color for accents. Between the cockpit and the engine compartment, Brabus mounted a carbon bulkhead with a window inside. After the world premiere as part of the ‘100 Years of Solitude Race’, several car magazines and TV magazines used the prototypes for driving reports. Afterwards, they disappeared into oblivion. Due to the high maintenance requirements – the engine had to be completely removed just for an oil change – the stock was reduced from ten to three cars. One remaining vehicle is at Brabus, two in the factory collection of Mercedes-Benz. None of the prototypes went into private customer hands, which is hardly surprising given the estimated price of at least € 330,000 per unit.