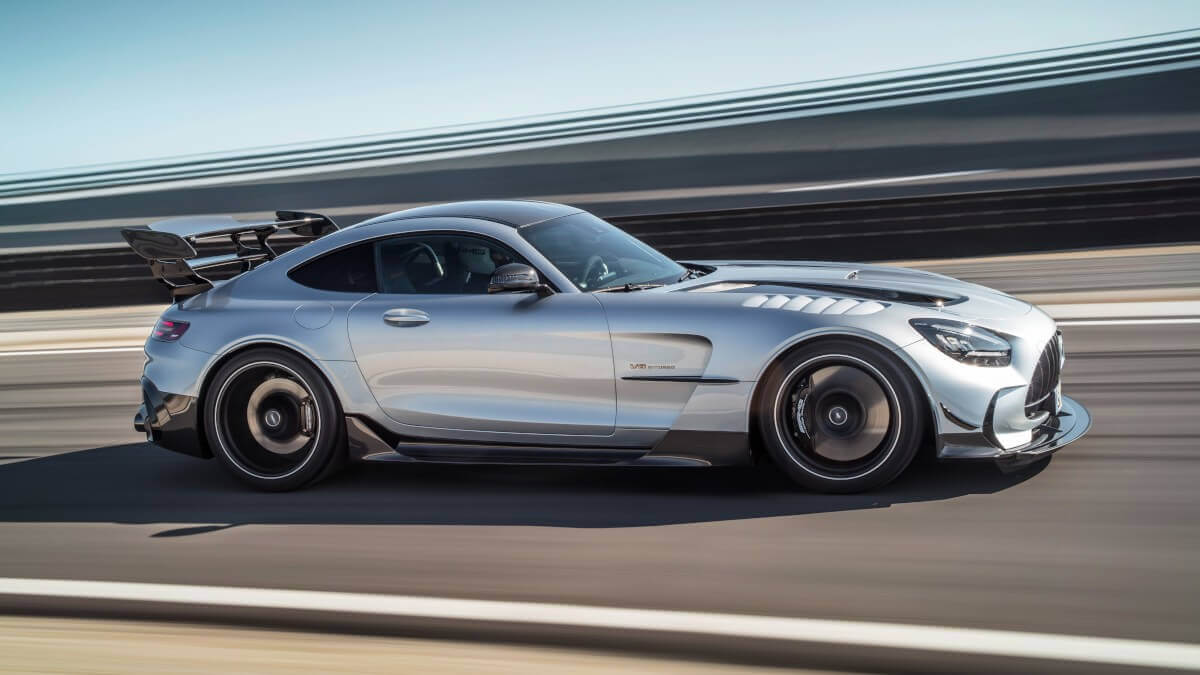 Under the large carbon hood with air vents is a completely modified engine compared to the GT model siblings. While these have crankshafts with crankpins offset at a 90° angle, the four-liter V8 biturbo engine in the GT Black Series has a so-called flat crankshaft with a 180° offset. This not only makes for smoother running, but also increases torque at low revs. New exhaust manifolds and camshafts were developed to match. Other features such as dry sump lubrication and the arrangement of the turbochargers in the hot inner-V between the cylinders were retained. The power output rose to 537 kW/730 hp and 800 newtonmeters of torque. This power continues to be transmitted to the rear wheels via a seven-speed dual-clutch gearbox with adjustments to the extra power, allowing the driver to accelerate the GT Black Series in 3.2 seconds to 62 mph and to 124 mph in less than nine seconds. The topspeed is 202 mph. 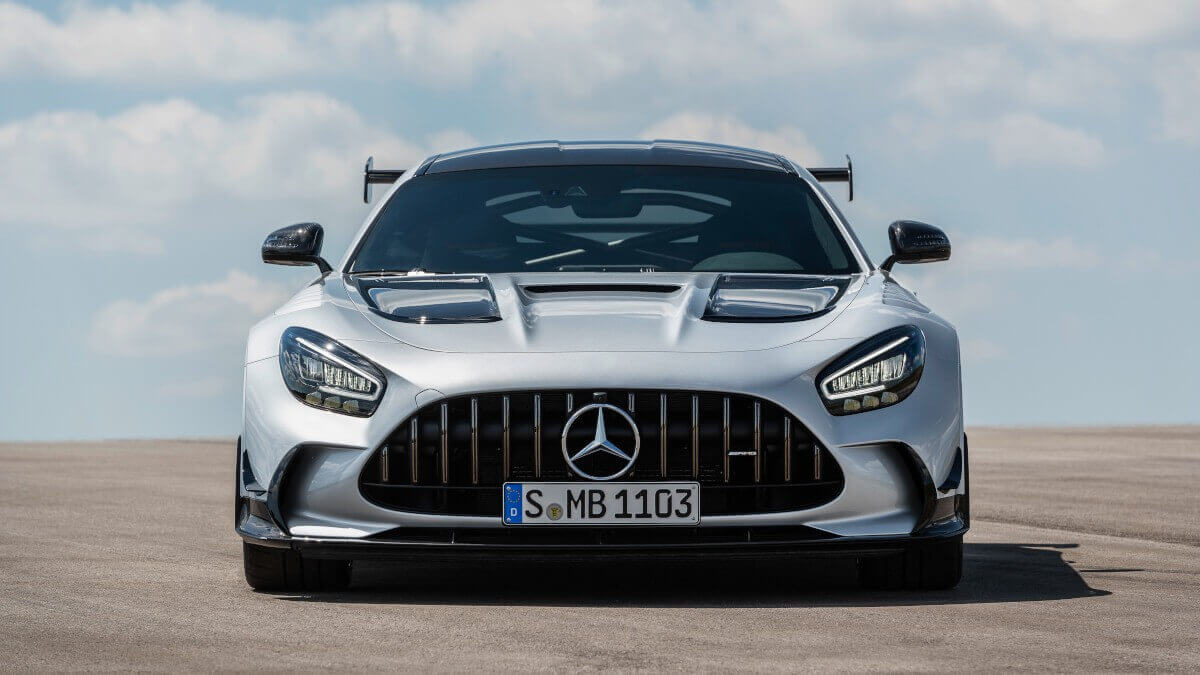 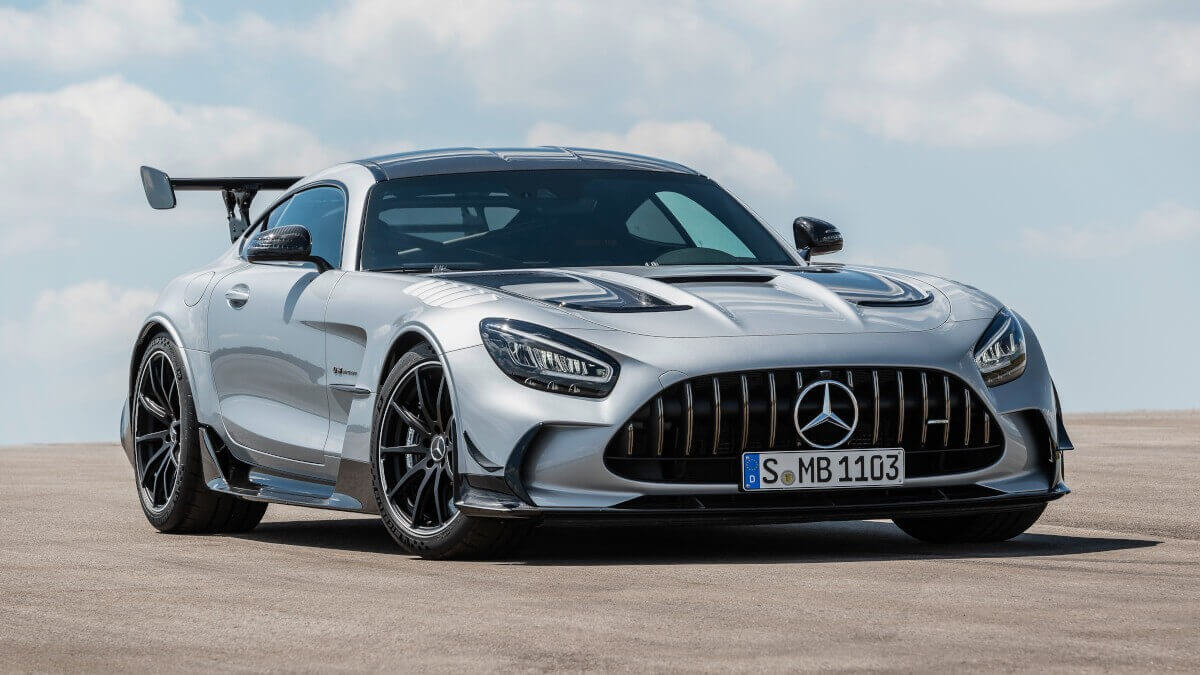 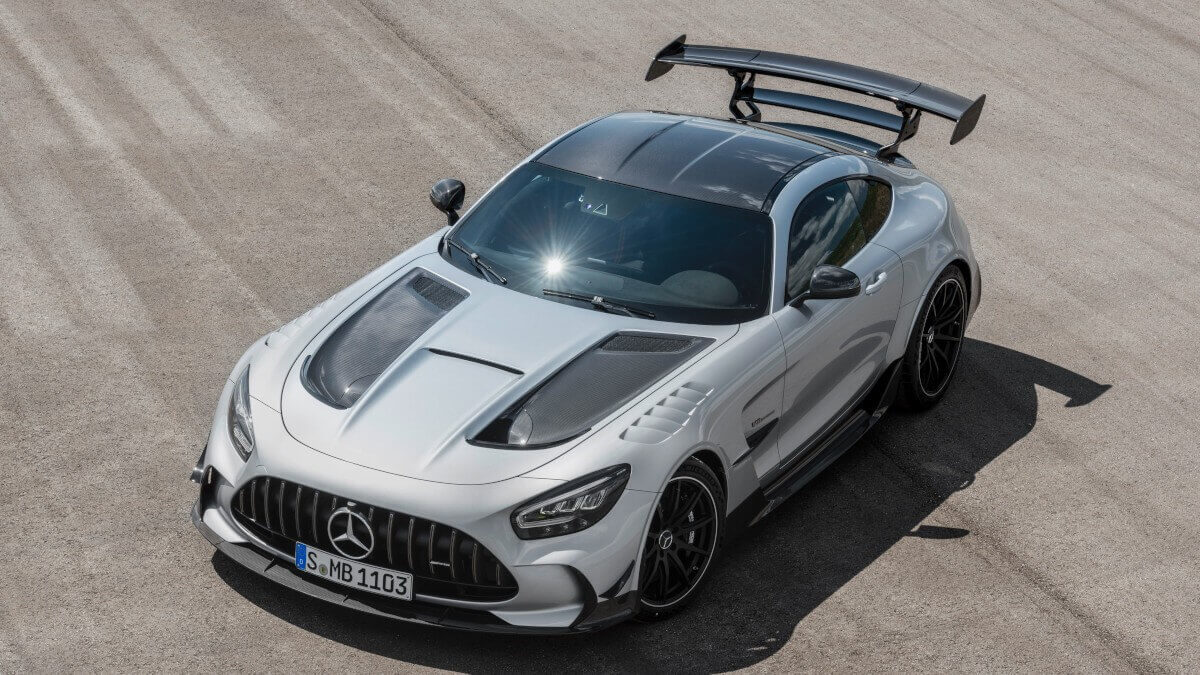 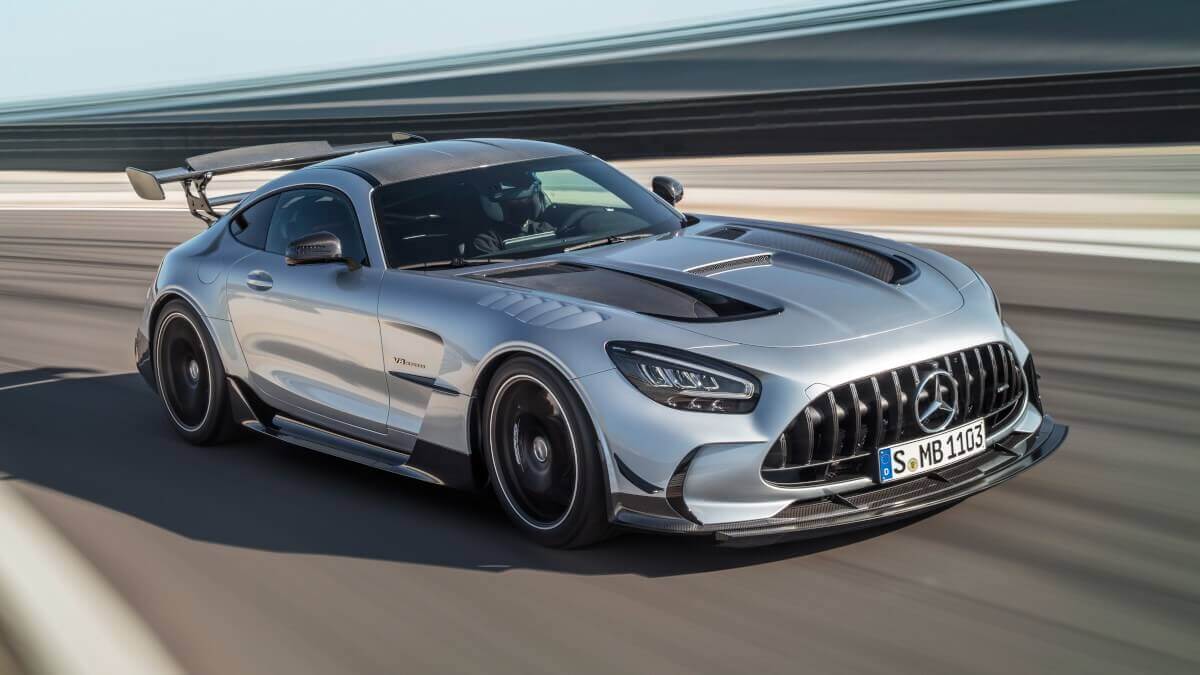 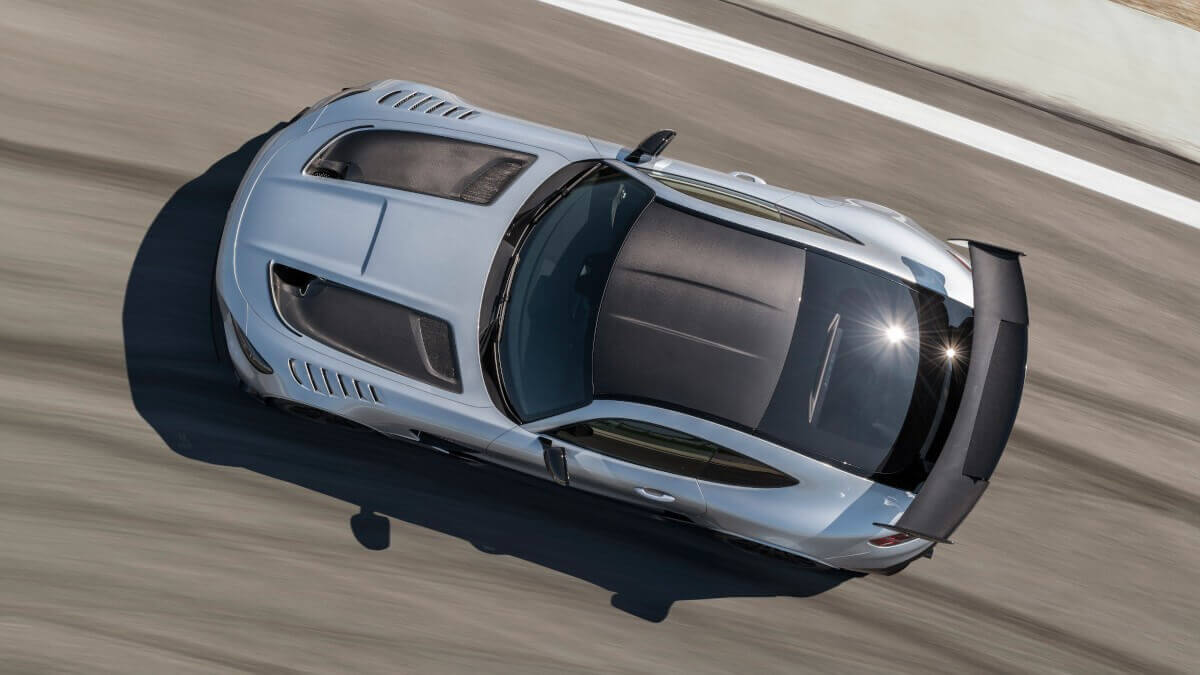 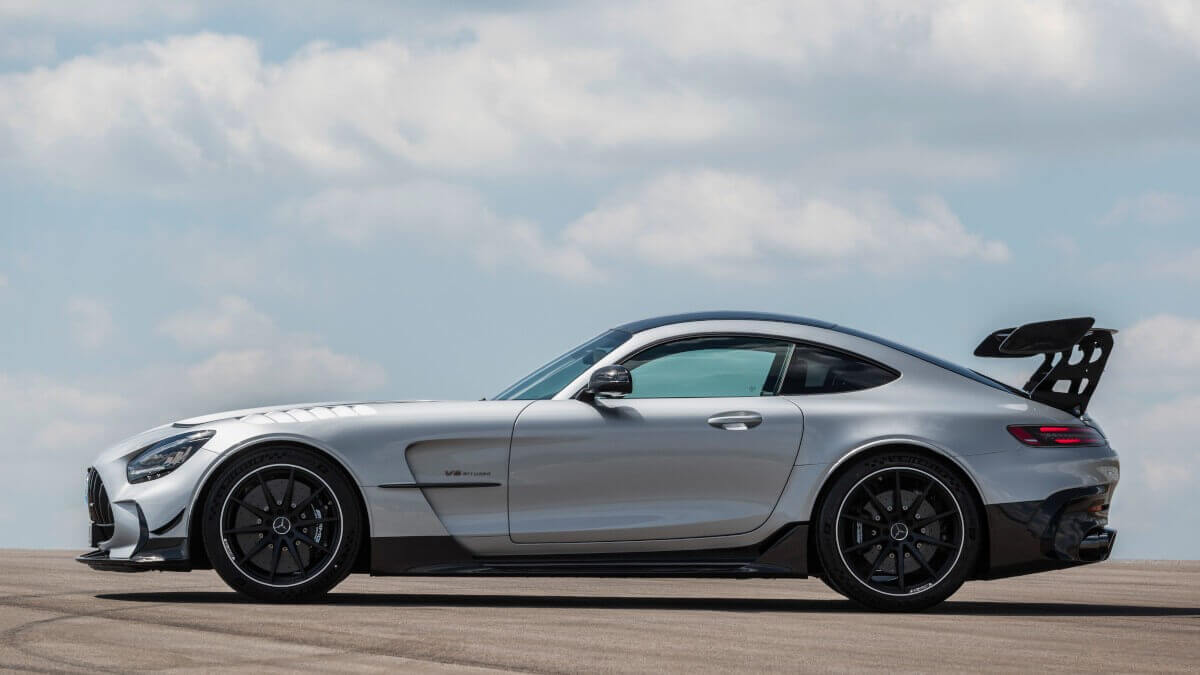 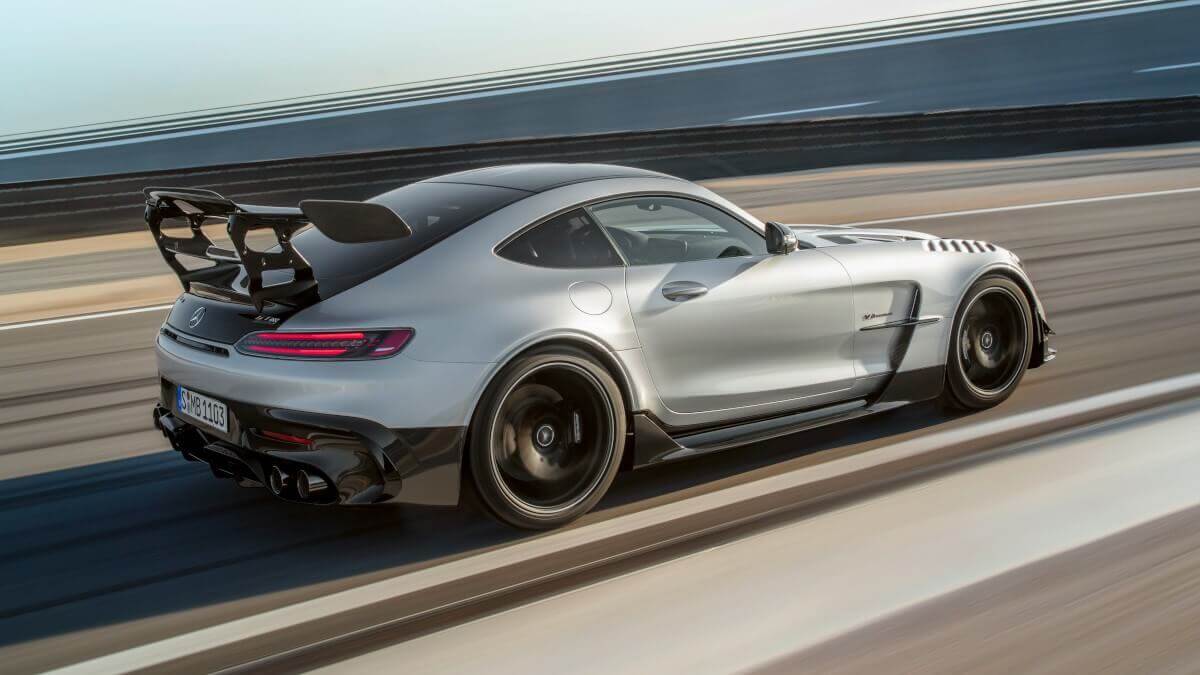 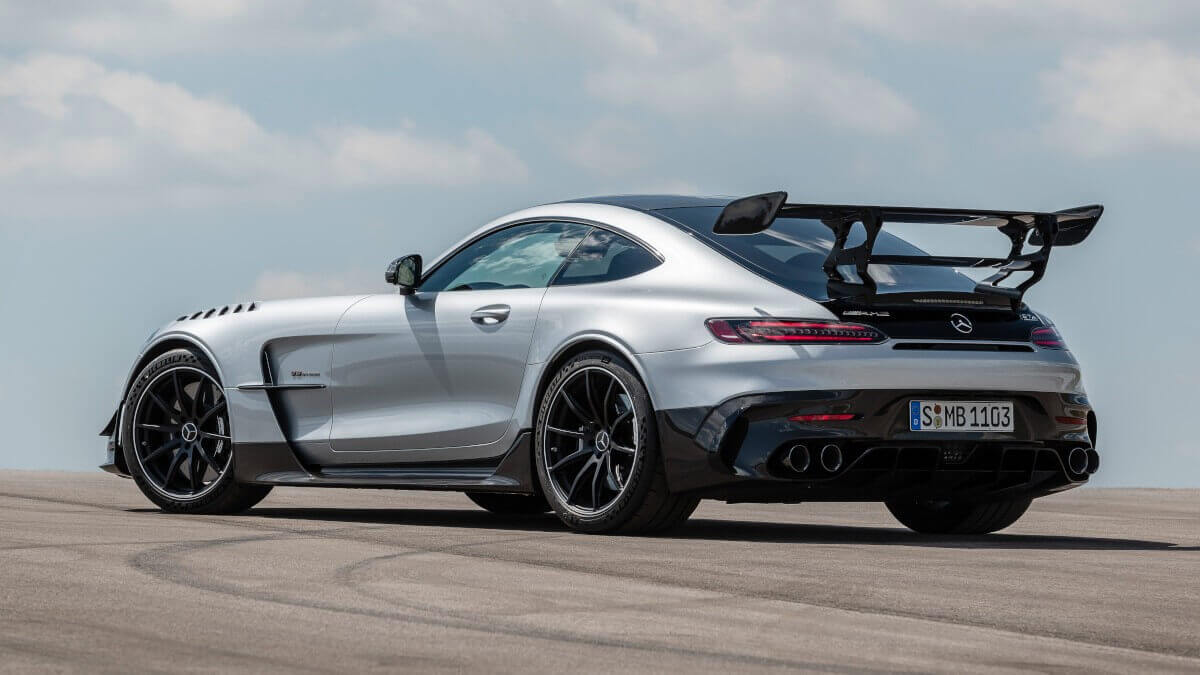 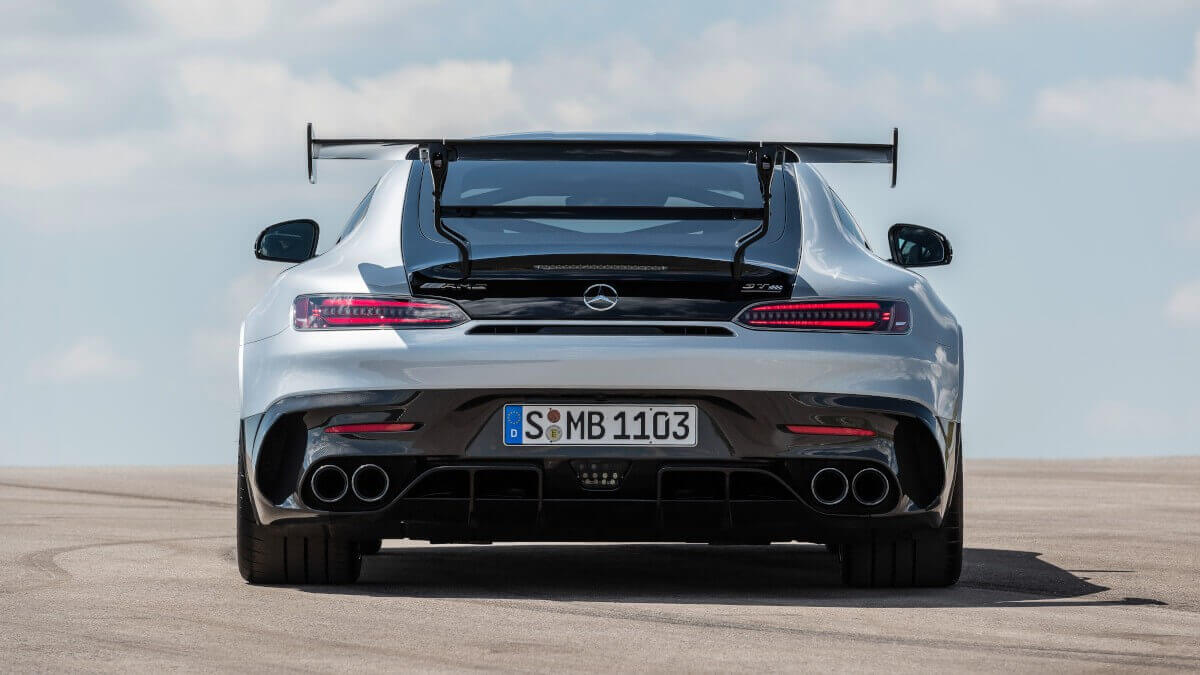 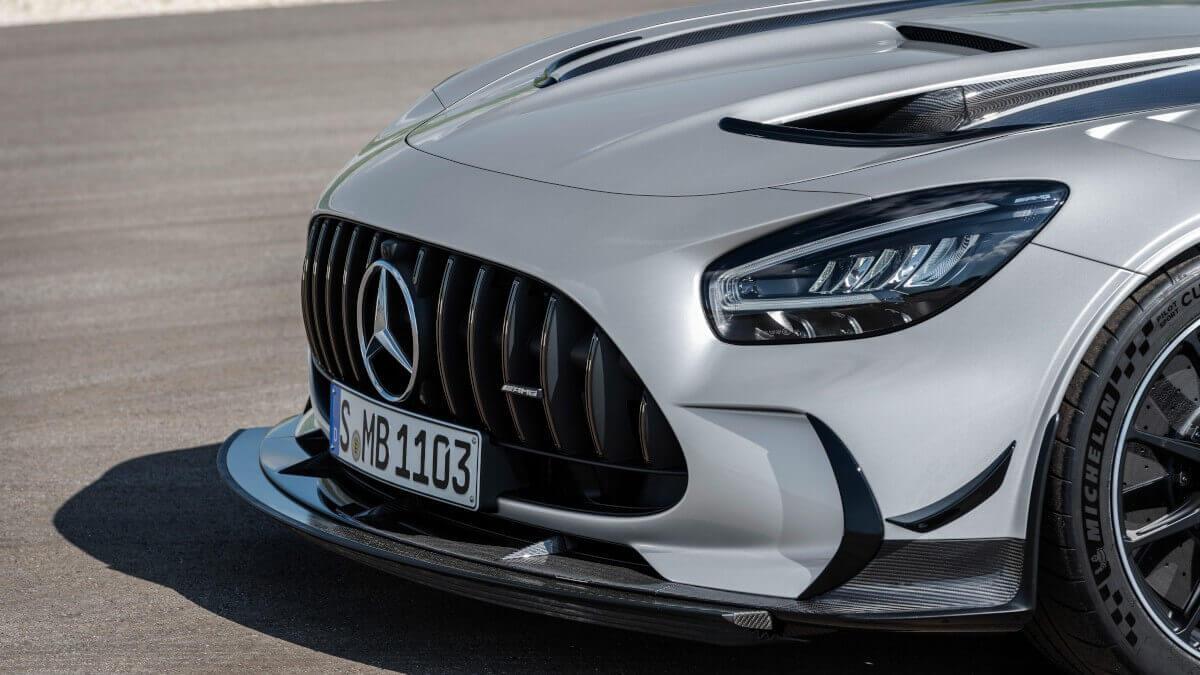 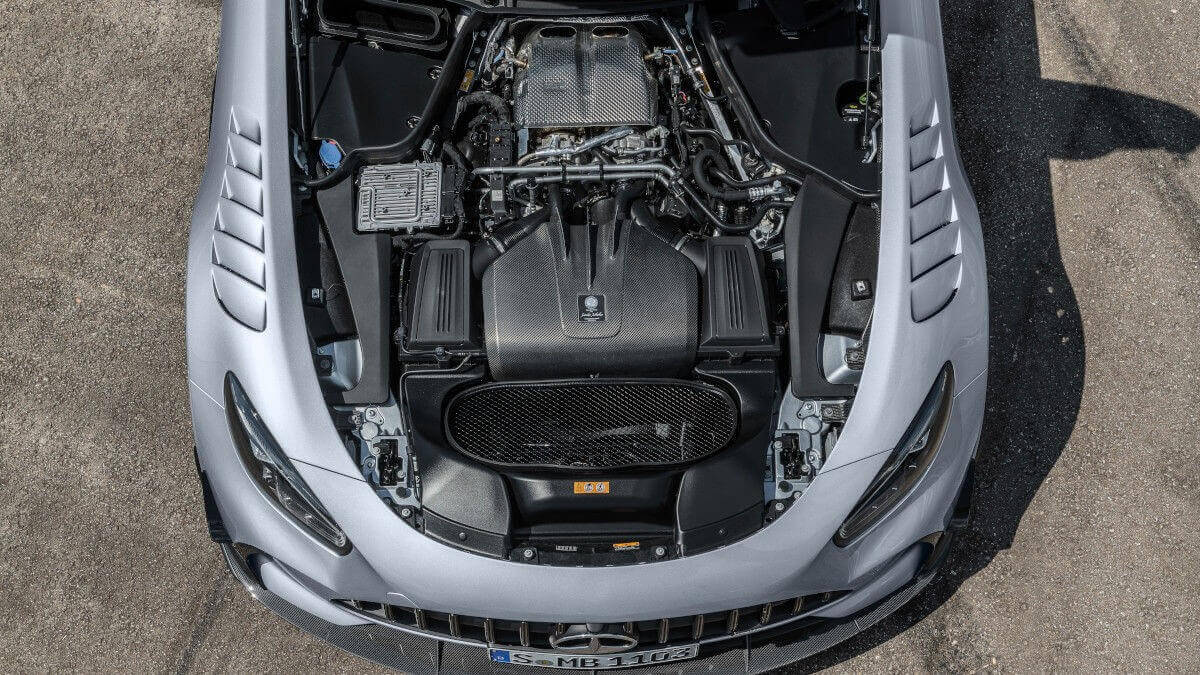 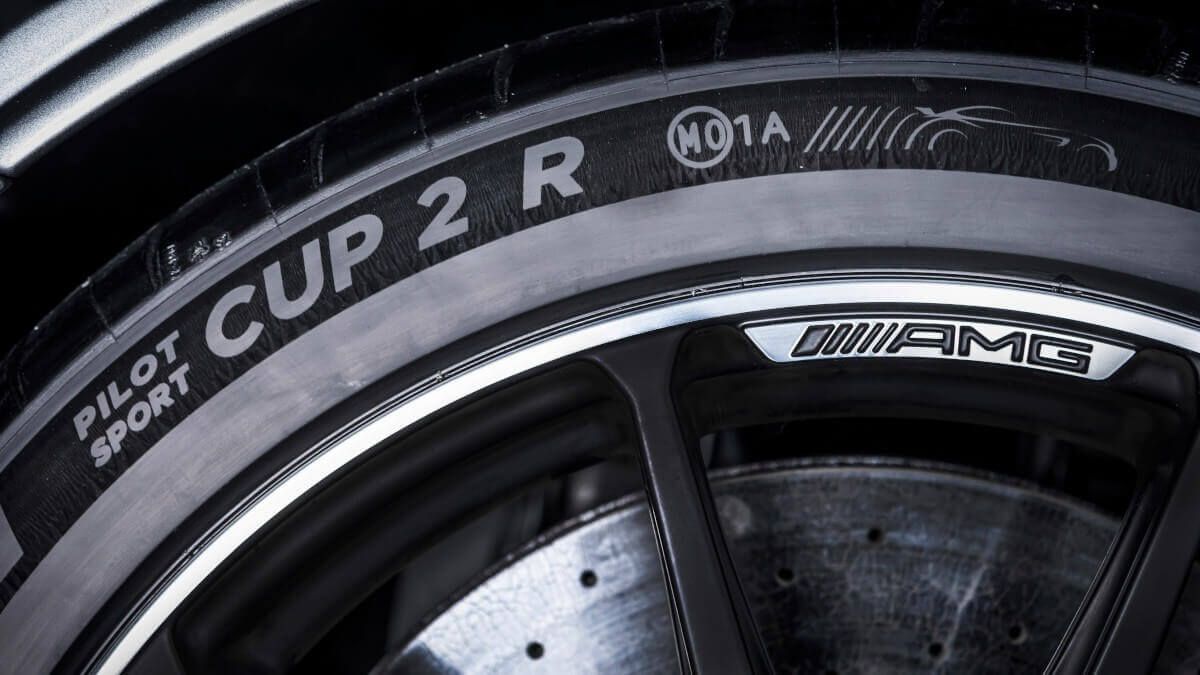 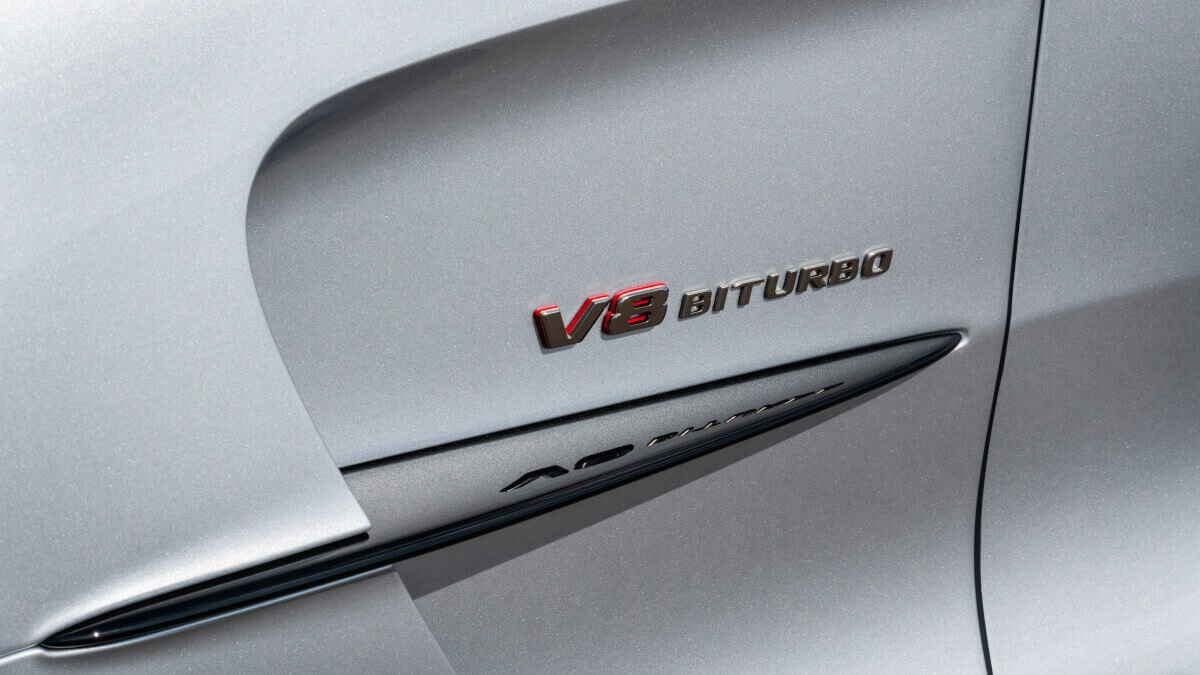 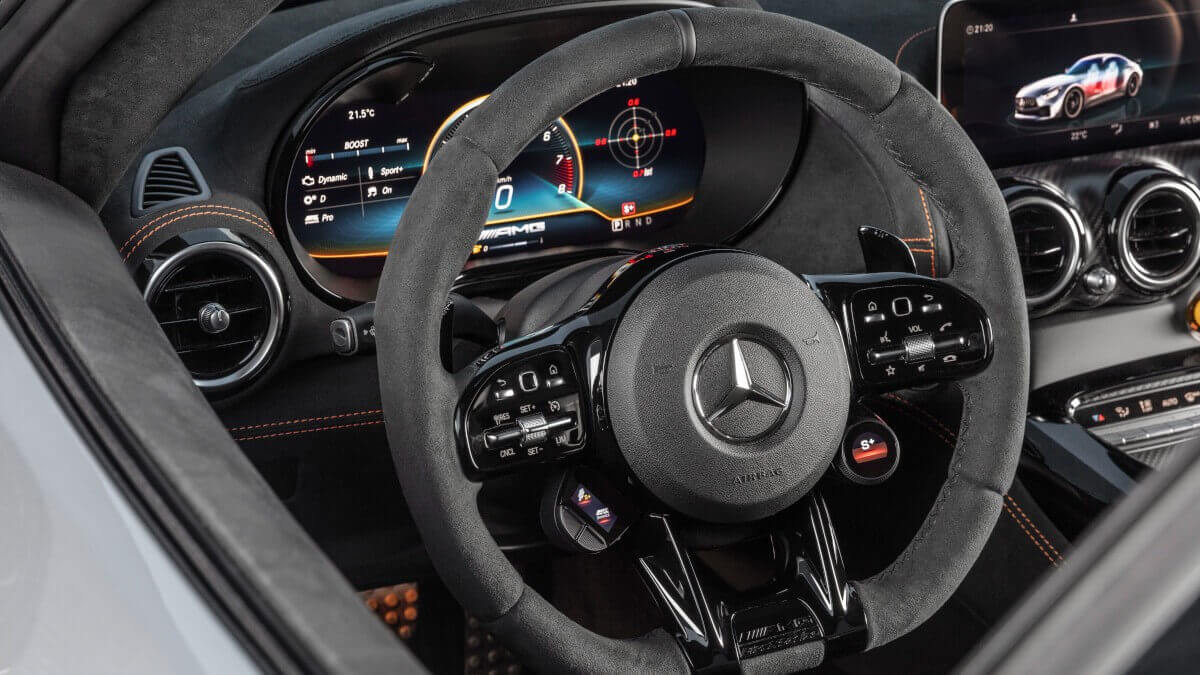 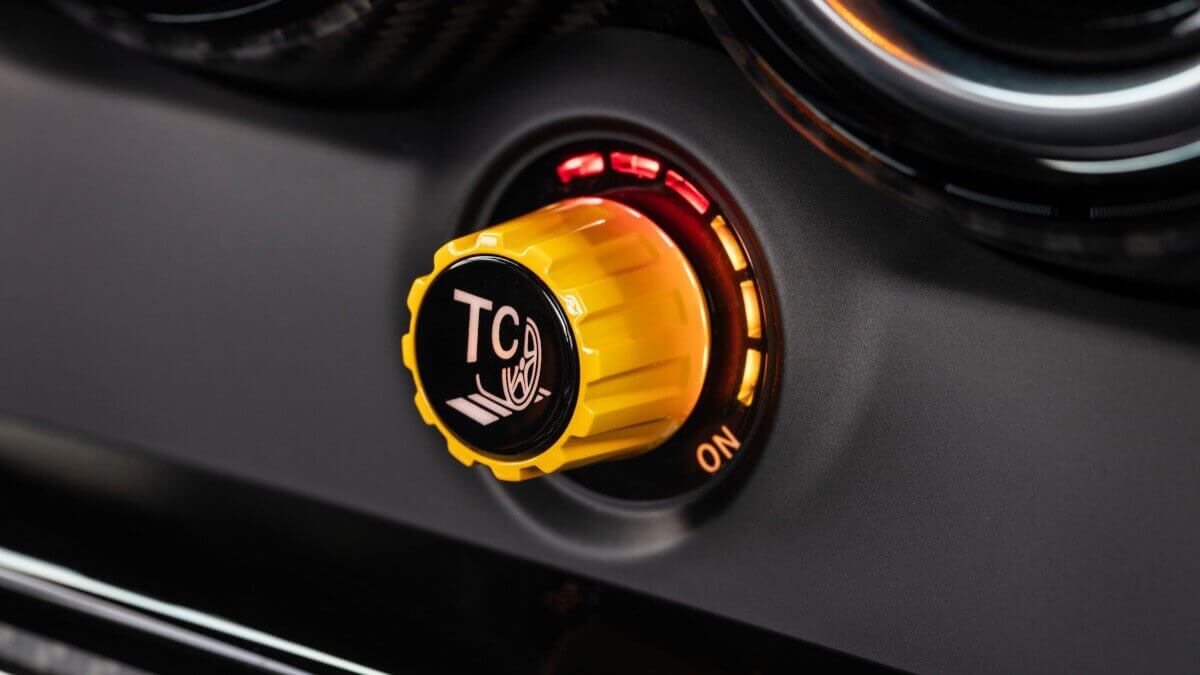 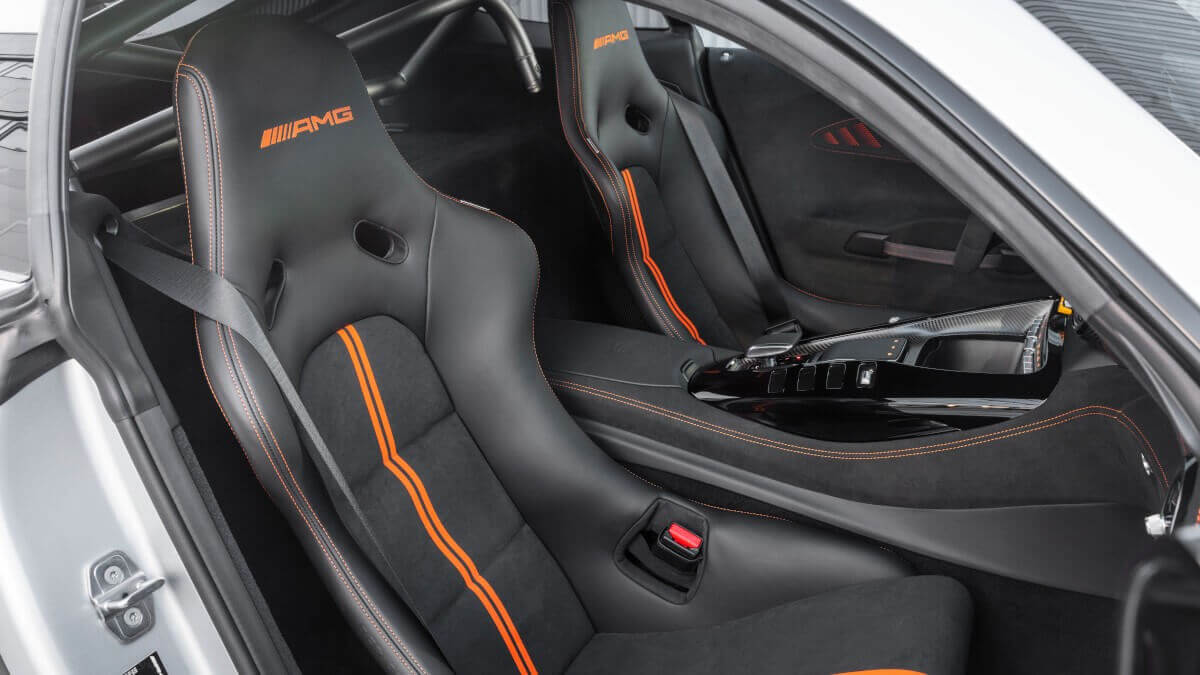 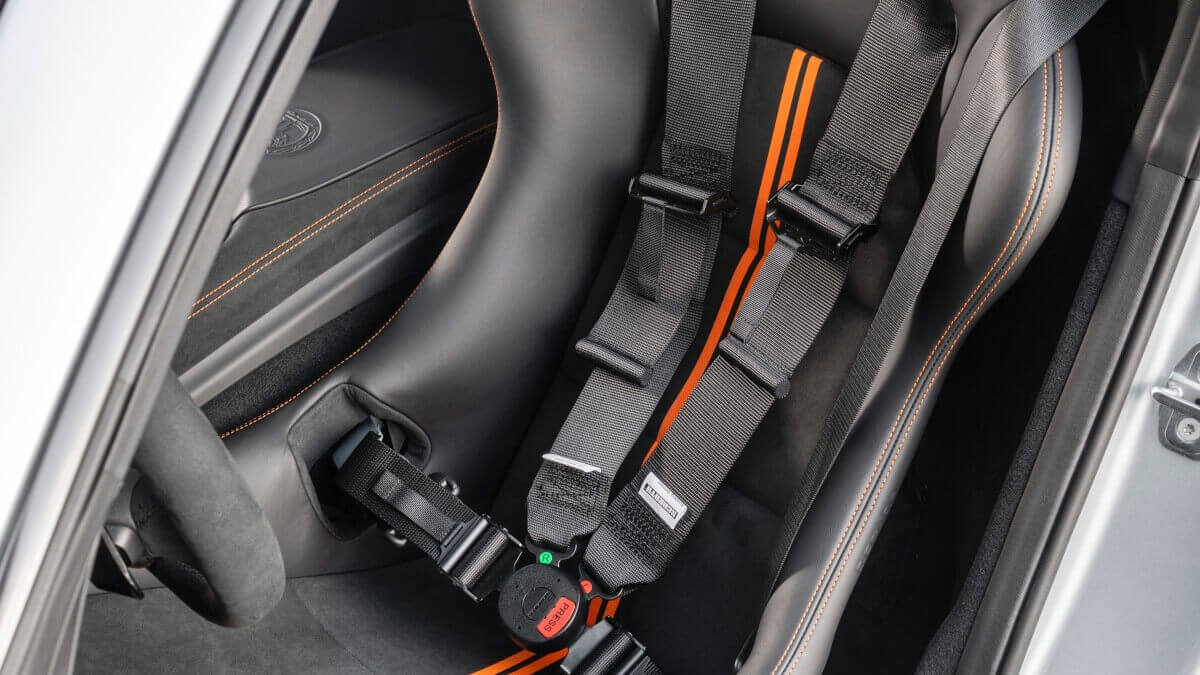 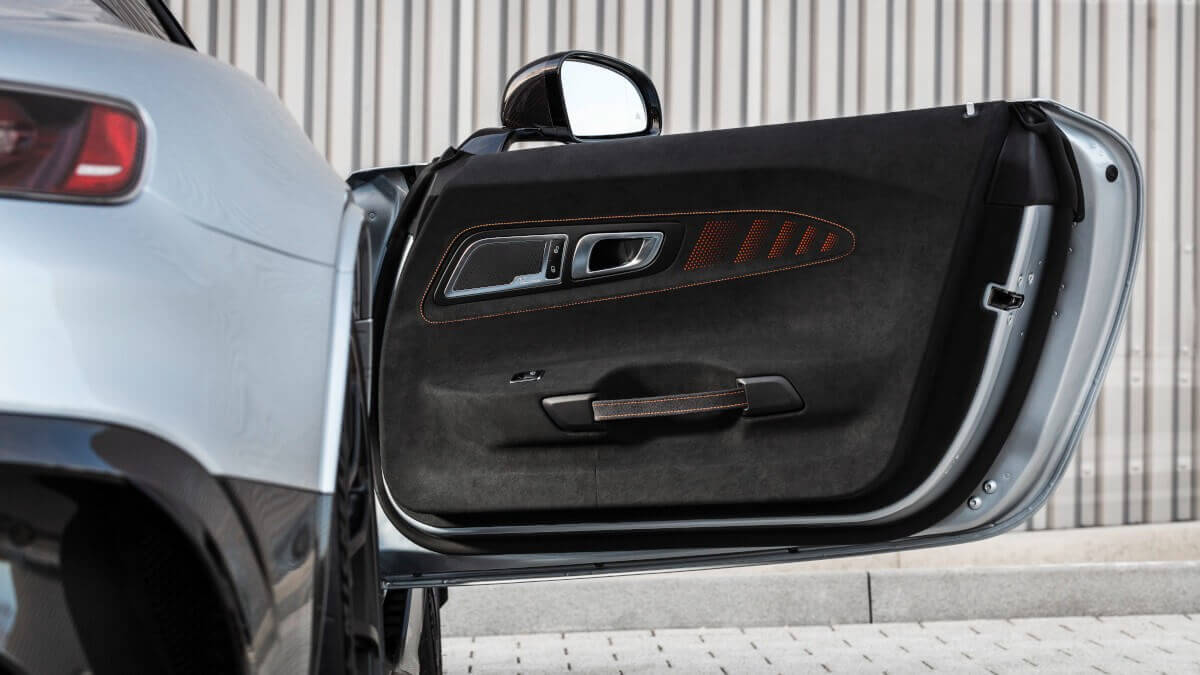 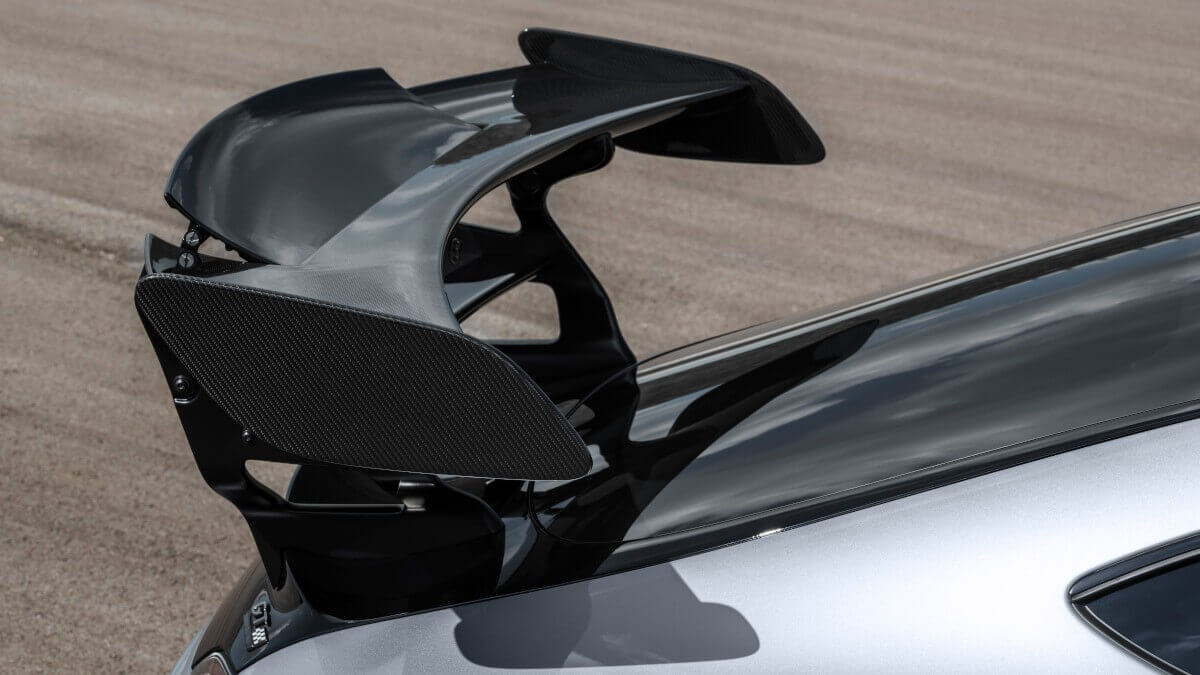 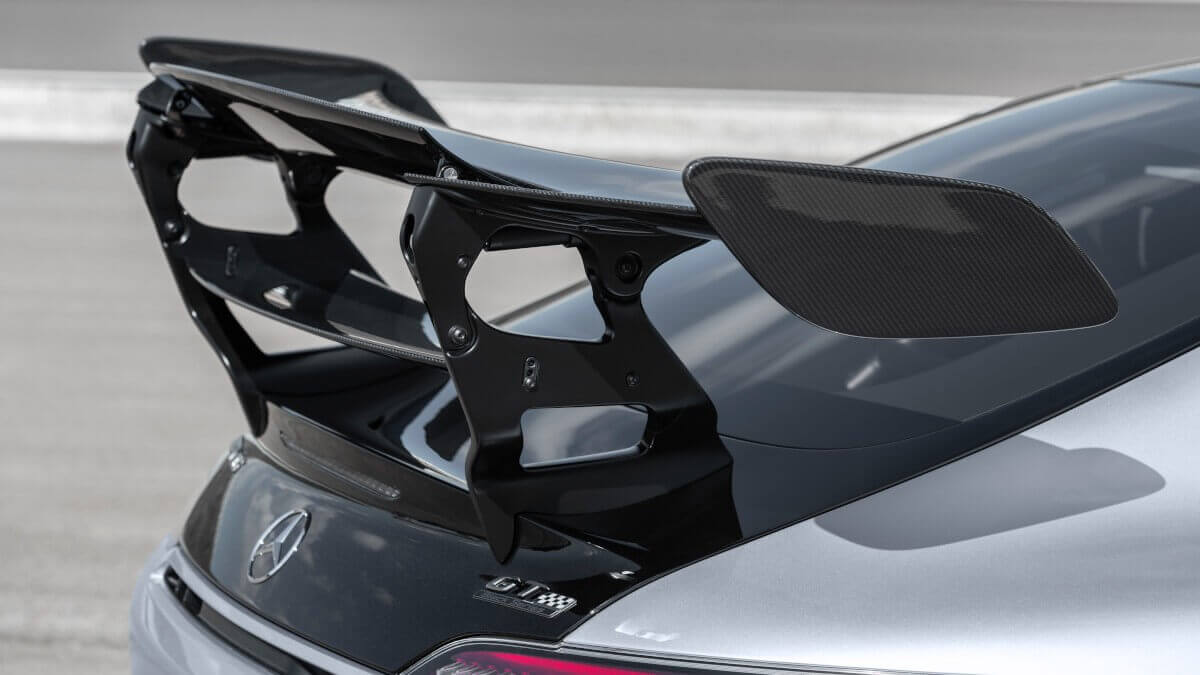 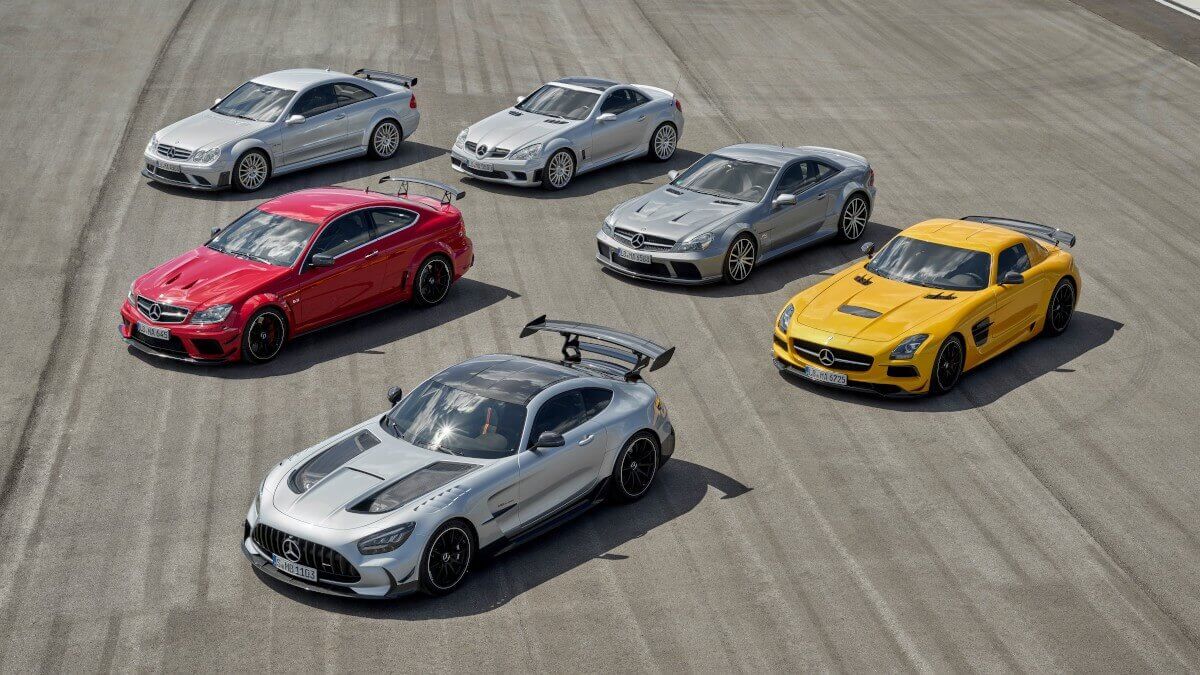 The development engineers paid particular attention to the aerodynamics of the Mercedes-AMG GT Black Series. In doing so, they clearly approached the design of the racing versions for the GT4 and GT3 categories. To this end, the Panamericana radiator grille was widened and small lateral air inlets were added. These provide an air curtain around the front wheels, while crescent-shaped flics next to them increase the downforce. These measures are supported by the carbon front splitter, under which there is an additional lip that can be manually extended by around five centimeters. Louvres above the front wheels and air vents behind them ensure ventilation of the wheel arches. Like the rear ones, these are significantly wider and are visually linked by new sill covers. A recess has been integrated into the center of the carbon roof to allow the airflow to be better directed to the rear. Above a tear-off edge on the black-painted carbon boot lid sits a giant rear wing with two tiers and a movable flap, which is electronically controlled and adjusts by up to 20 degrees depending on the mode selected in the AMG Dynamics system. Further down is a wide diffuser with integrated exhaust tailpipes to complete the covered underbody. The downforce can reach up to 400 kilograms.

Additional stiffeners in the floor assembly help the AMG GT Black Series to achieve the best possible handling in conjunction with the standard coil-over suspension, adaptive damper adjustment and a large ceramic composite brake system behind the ultra-light forged wheels. For the first time, these wheels are fitted ex works with Michelin Pilot Sport Cup 2 R tyres with MO2 identification in the dimensions 285/35 ZR 19 at the front and 335/30 ZR 20 at the rear. The interior with black nappa leather and Dinamica upholstery is accentuated with orange stitching and stripes. Alternatively, the contrasts are also available in grey. Black piano lacquer and matt exposed carbon fibre skilfully round off the center console. Driver and front passenger are provided with carbon bucket seats except in the USA, Canada and China, where AMG will use the normal performance seats instead. Except in those three markets, additional four-point seat belts are included in the standard equipment, which can be latched onto the rollbar behind the seats.