After other manufacturers such as Porsche, Ferrari and Lamborghini have been issuing certificates for classic models for many years, not only detecting deviations from the respective delivery condition, but also increasing the market value for collectors, Lotus is now also implementing a corresponding programme under the name ‘Certificate of Provenance’. This is aimed at owners of Lotus sports cars from all model years, and can also be purchased directly with a new vehicle. In an exclusive box labeled ‘Lotus – For The Drivers’ comes not only the certificate printed on high-quality paper with a list of important vehicle data such as chassis number, original color, equipment and production date, but also a copy of the Build Specification Letter with more detailed background information about the car and a personal letter from CEO Phil Popham to the current owner.

The three papers are enclosed in a black envelope, behind which are further goodies in the box. These include a leather key ring, an engraved, black anodised aluminium badge with the owner’s name and details of the car, a carbon bookmark featuring Lotus’ nine greatest motorsport successes, an exclusive ink pen and a round box with four logo pins. The complete package of the Certificate of Provenance is now available from all Lotus dealers worldwide. Friends and family members of a car owner can also order it to receive a beautiful gift. In the UK the cost is £ 170 plus shipping. 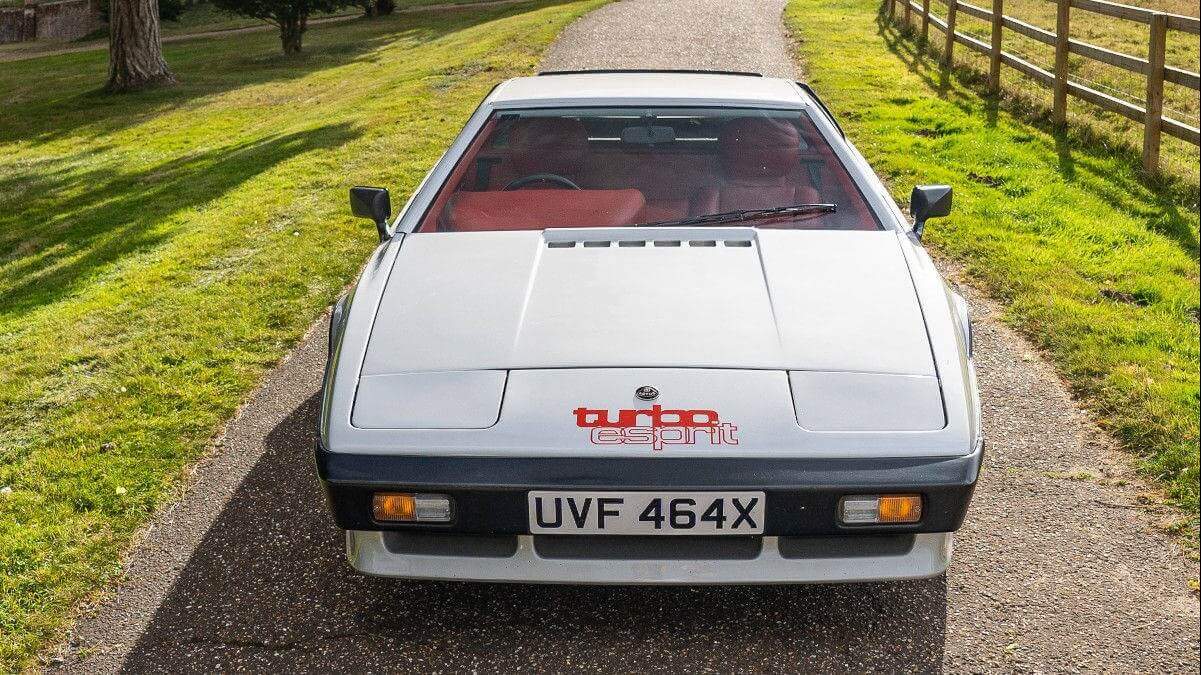 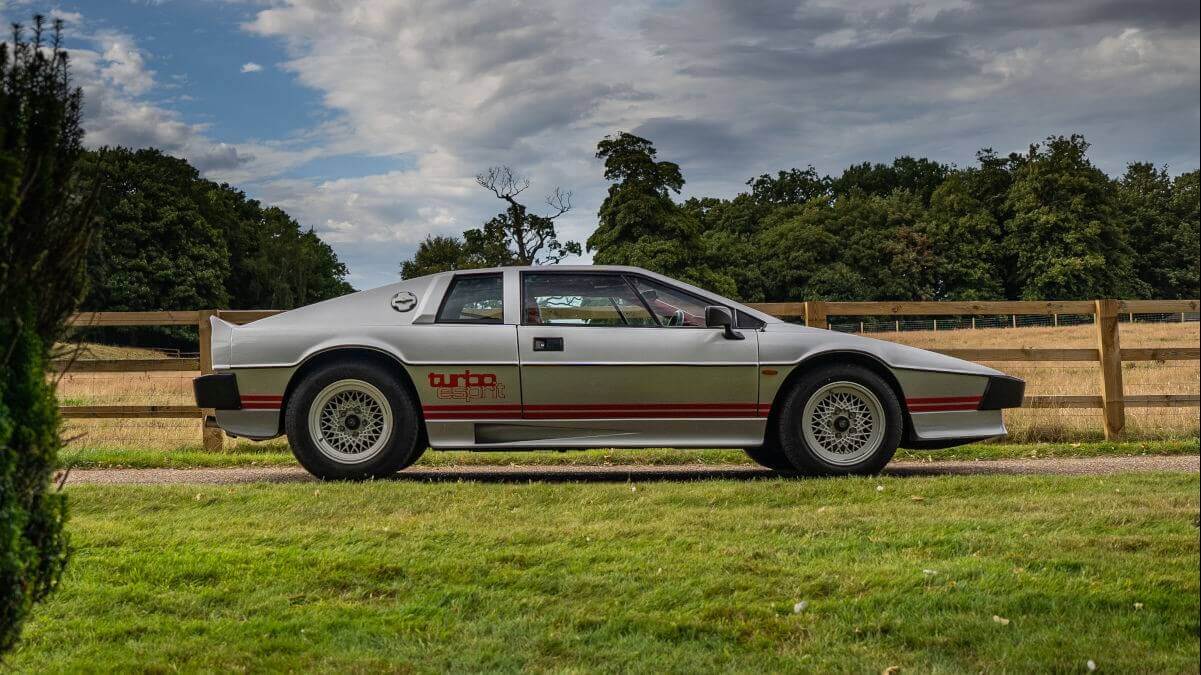 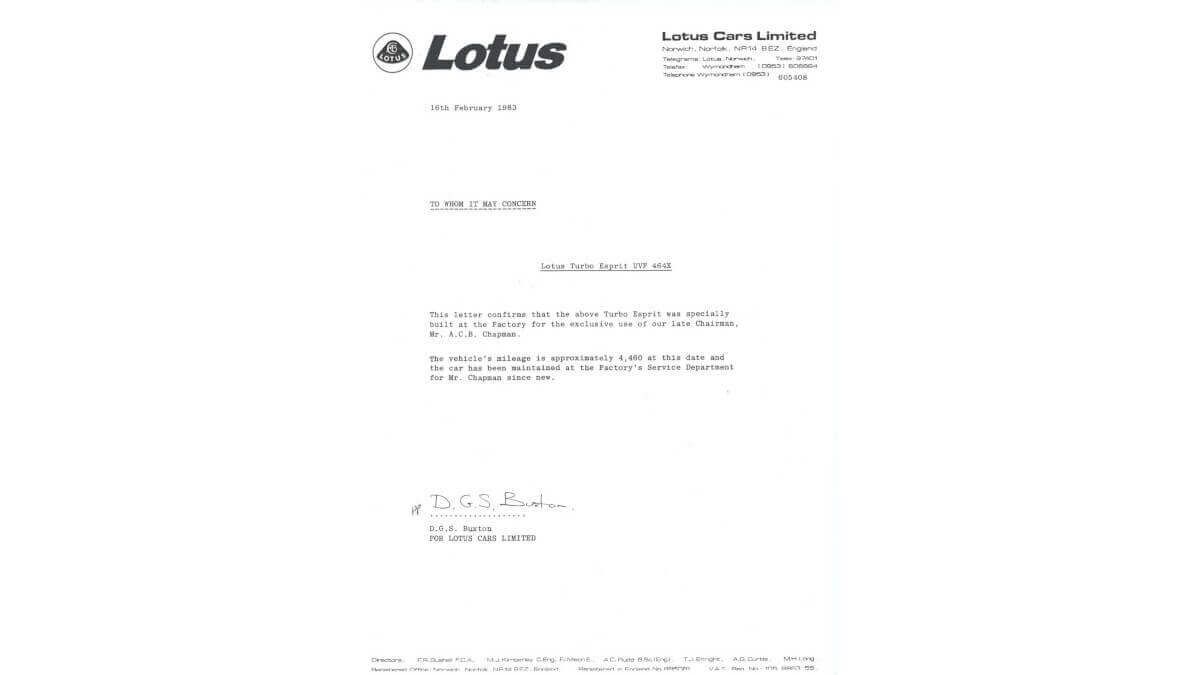 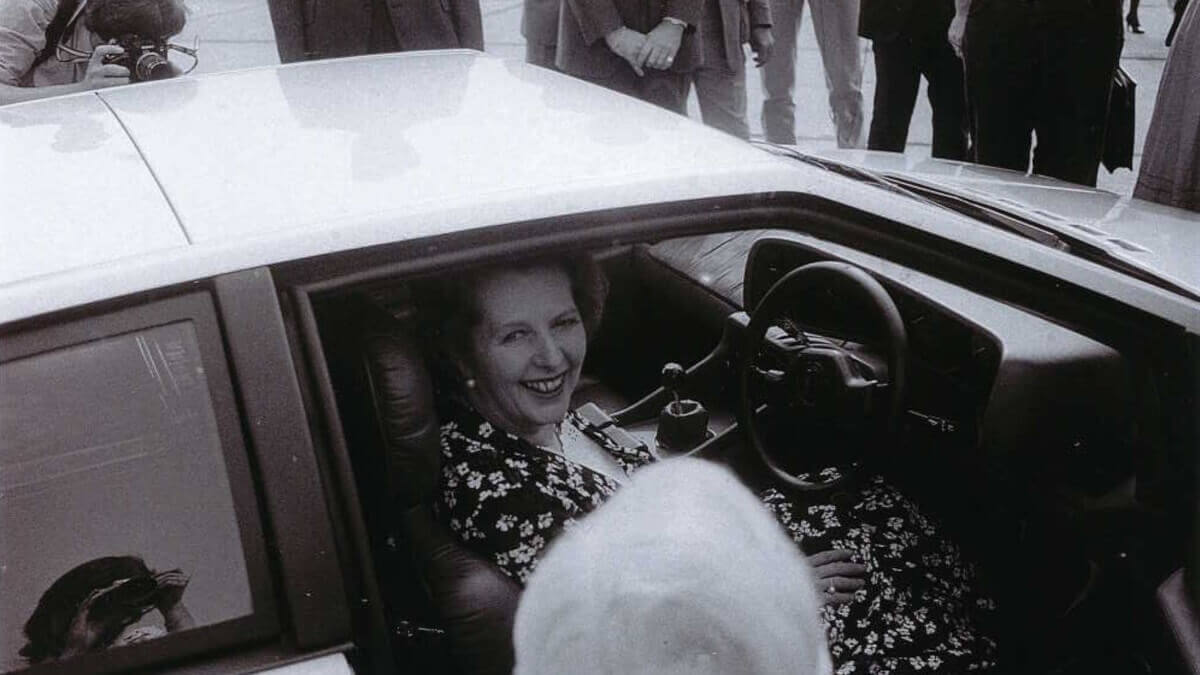 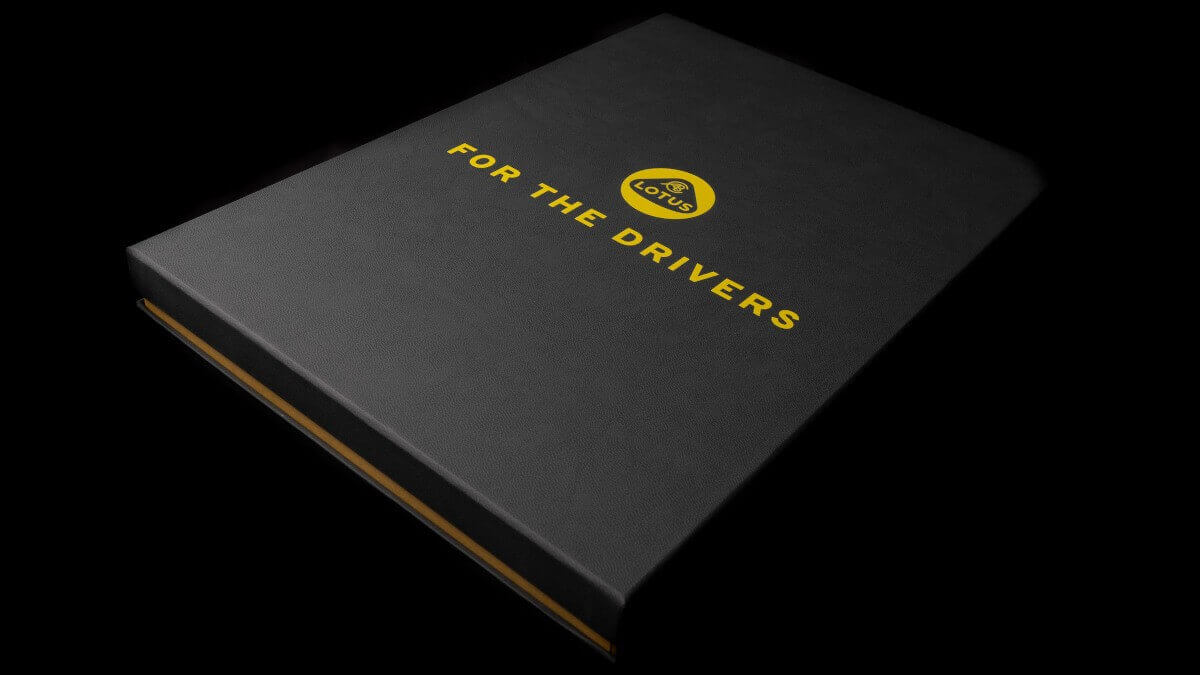 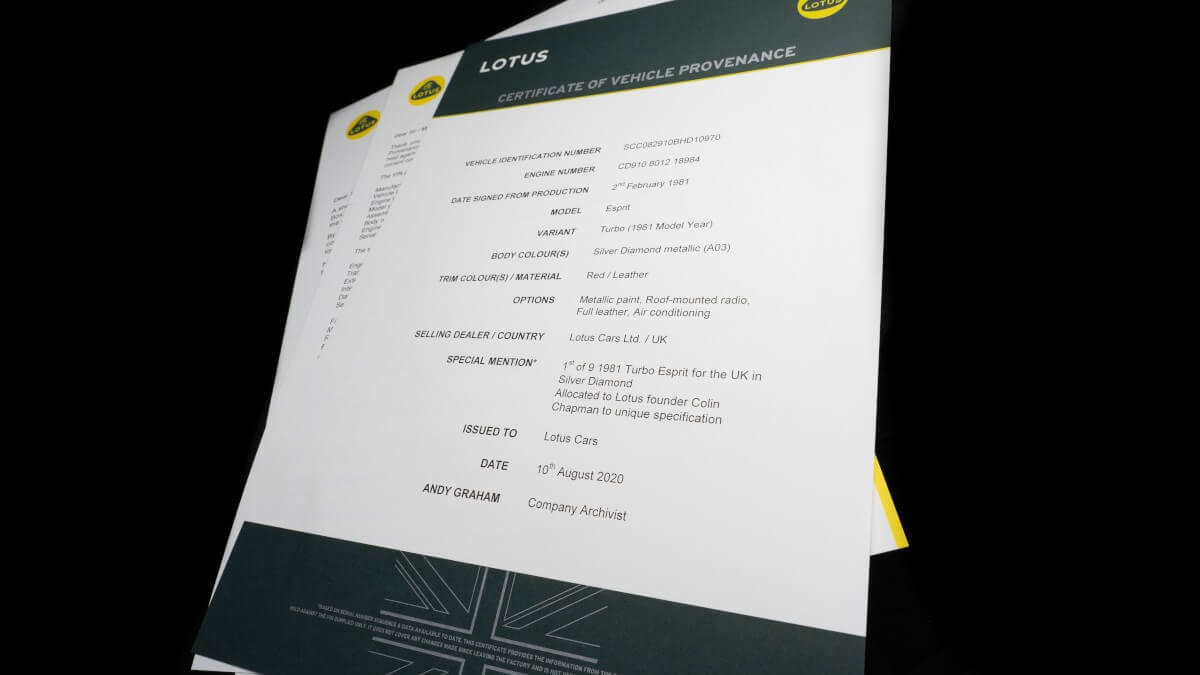 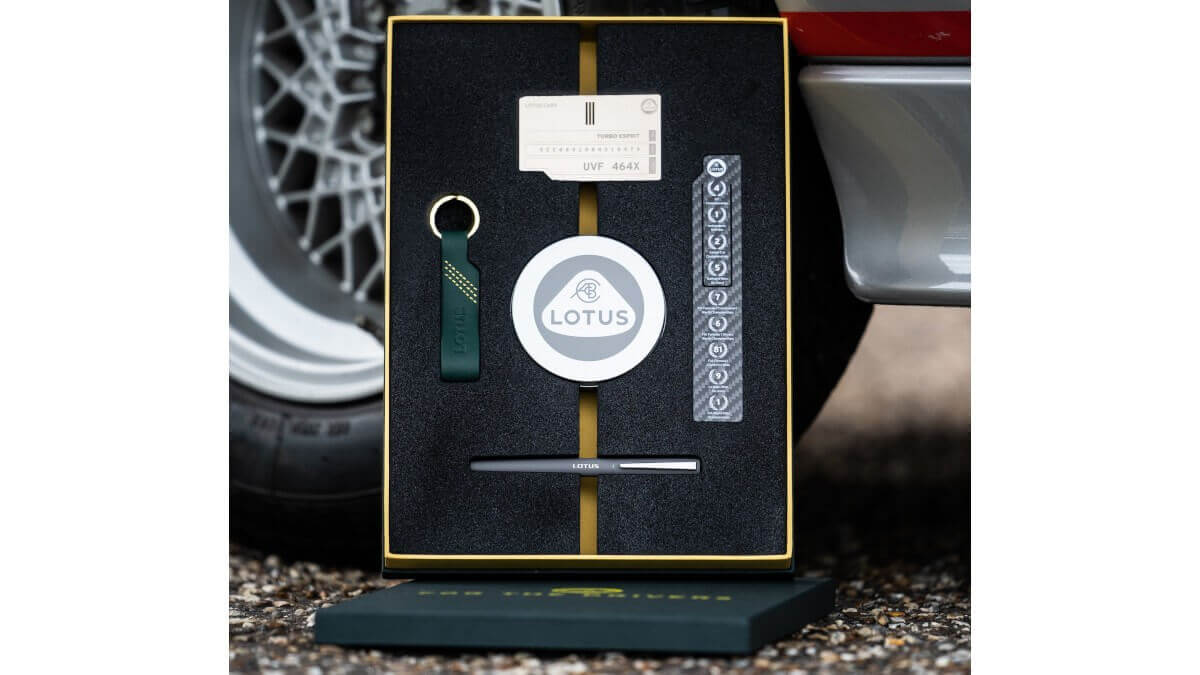 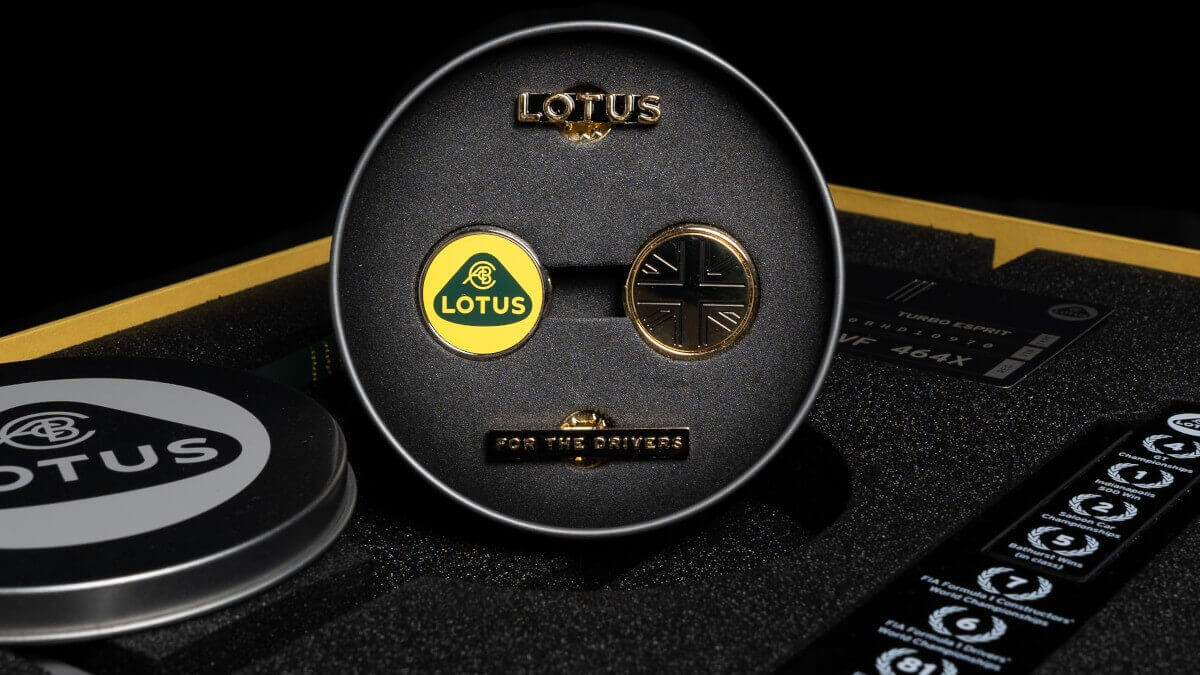 To best illustrate the scope of the Certificate of Provenance, Lotus chose a very special car. It is an Esprit Turbo, which was delivered as a company car to company founder Colin Anthony Bruce Chapman on 1 August 1981. At that time the car was given the registration number UVF 464X and served Chapman as a daily until his death in December 1982. Shortly after registration, on August 5, 1981, Lotus let the then British Prime Minister Margaret Thatcher take the wheel of the car when she visited Norfolk. At Norwich Airport she had a brief chat with Colin Chapman and then drove around the private roads of the grounds with this Esprit. Subsequently she was quoted in some newspapers as saying: ““I was tempted to drive away in it.”

The silver car was given ‘Turbo Esprit’ decals and a red leather interior at the request of the company founder. He also had an air conditioning system and a Panasonic audio system with control panel in the headliner installed. Compared to other Esprit Turbo cars of the time, the power steering (used for the first time in this very car), lowered sports suspension, BBS wheels and modified brakes stand out, which were all specially ordered by Chapman. In July 1983 the sports car changed hands to a private owner, but to this day only has a mileage of 11,000 miles and has received regular maintenance at the factory. Now Lotus bought the car back and intends to carefully restore it in the near future.