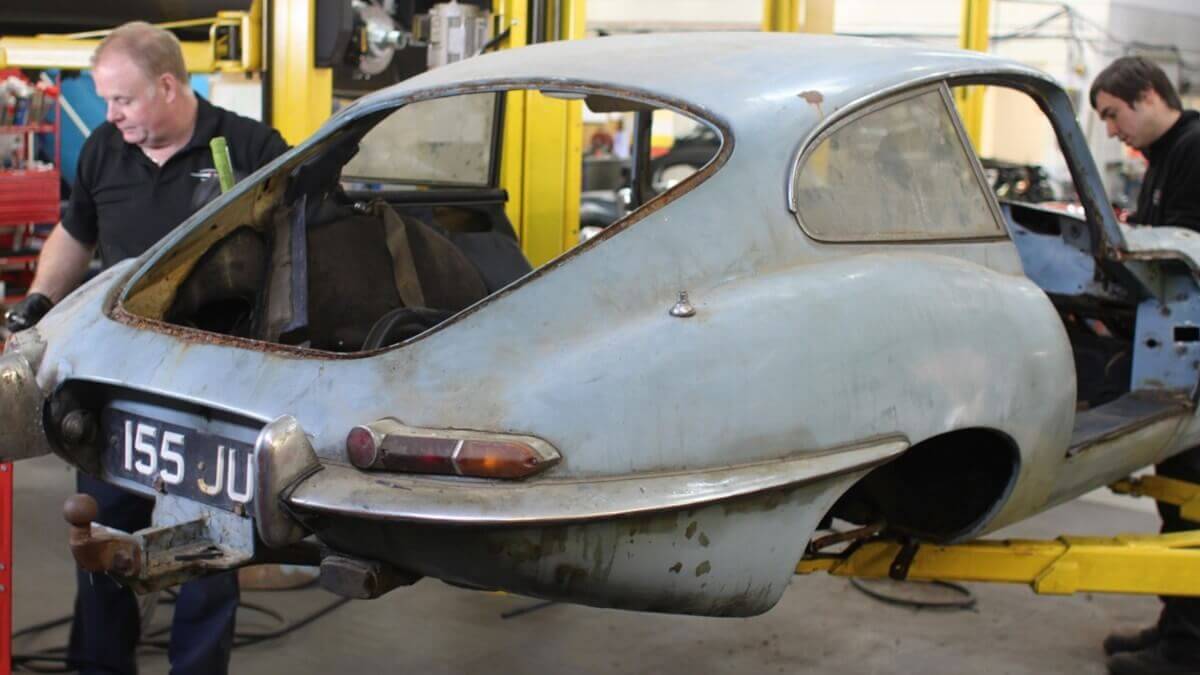 They still exist: cars that have been parked for decades in remote garages, halls or barns and are rediscovered at some point, usually by chance. In the vernacular these vehicles are known as ‘barn finds’. Various companies around the world make a living out of restoring such wrecks, whose paint has disappeared under thick layers of dust and dirt just as much as the chrome accents and whose technology was often last used in the 50s, 60s or 70s, back to top condition. One of them is E-Type UK from Hadlow/Great Britain. The name already anticipates which brand and model is the main focus here. In a new press release it was announced today that the restoration of an E-Type 3.8 Fixed Head Coupé (FHC) from 1964 has been completed.

The car in question was found in the garage of its previous owner in the southeast in England, where it had been parked unused since 1979. At first sight the condition seemed to be relatively good. Even the original ‘Opalescent Silver Blue’ paintwork was still in quite good condition in many places. Nevertheless, a closer look quickly revealed various damages, which made a complete restoration inevitable. The necessary work became even clearer when the bare metal of body and underbody were visible after sandblasting and stripping down the paint. Also some inexpensive repairs from the time between 1964 and 1979 could now be seen. The team of E-Type UK got down to work and replaced the rotten areas with newly made sheet metal sections. Especially the underbody and the sill areas required appropriate metal work. In the end there was a body-in-white on the uprights in the workshop, which is even stiffer than it would have been new ex works due to carefully executed work. 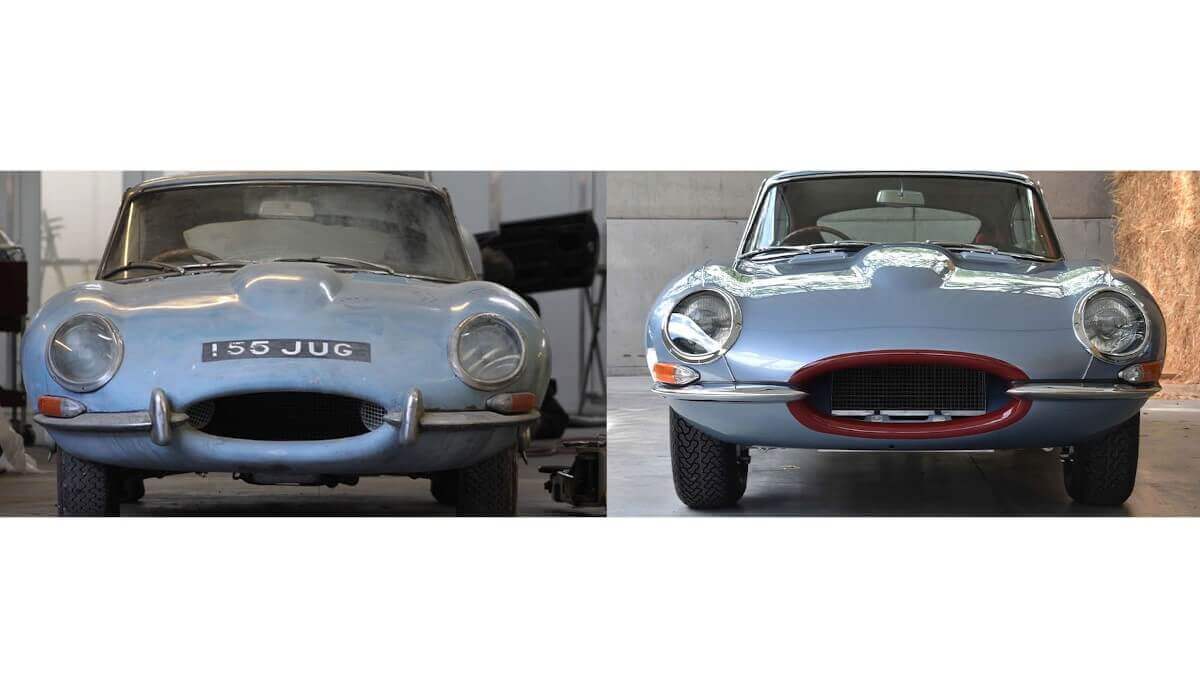 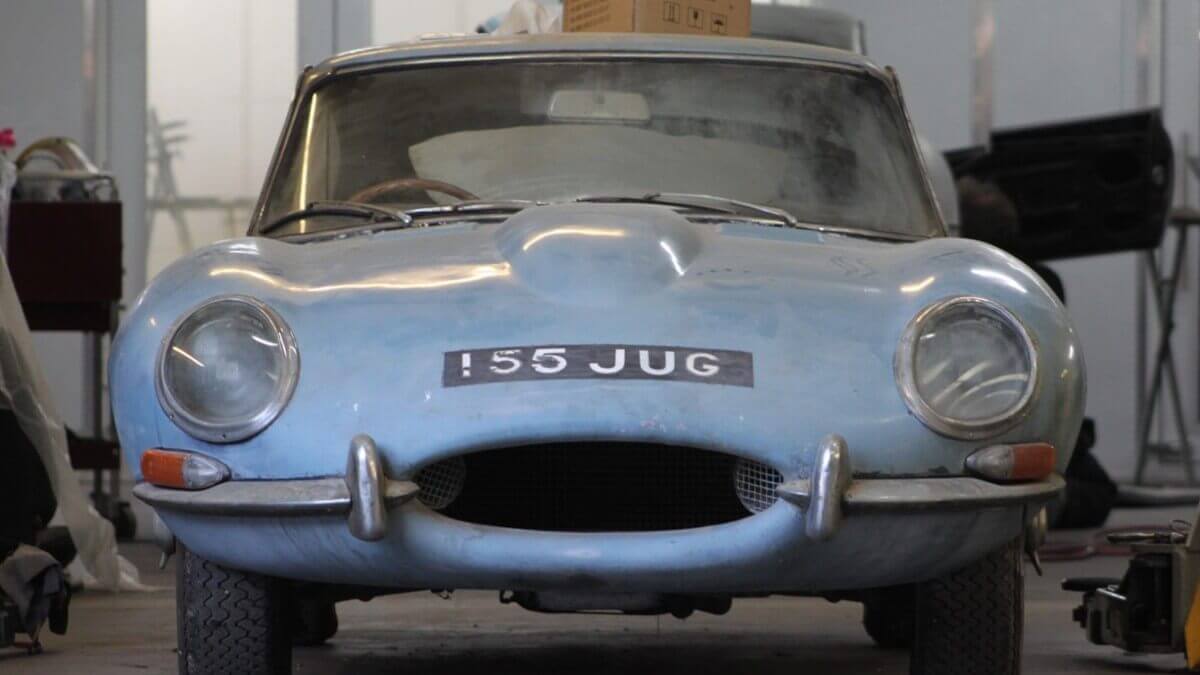 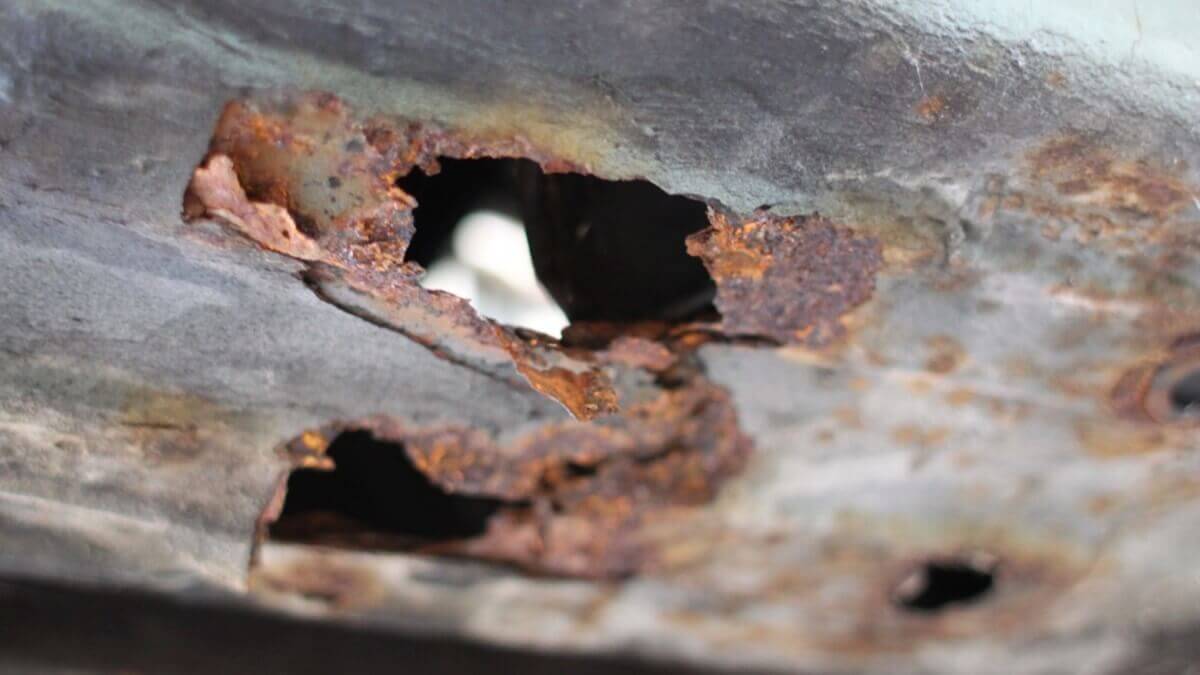 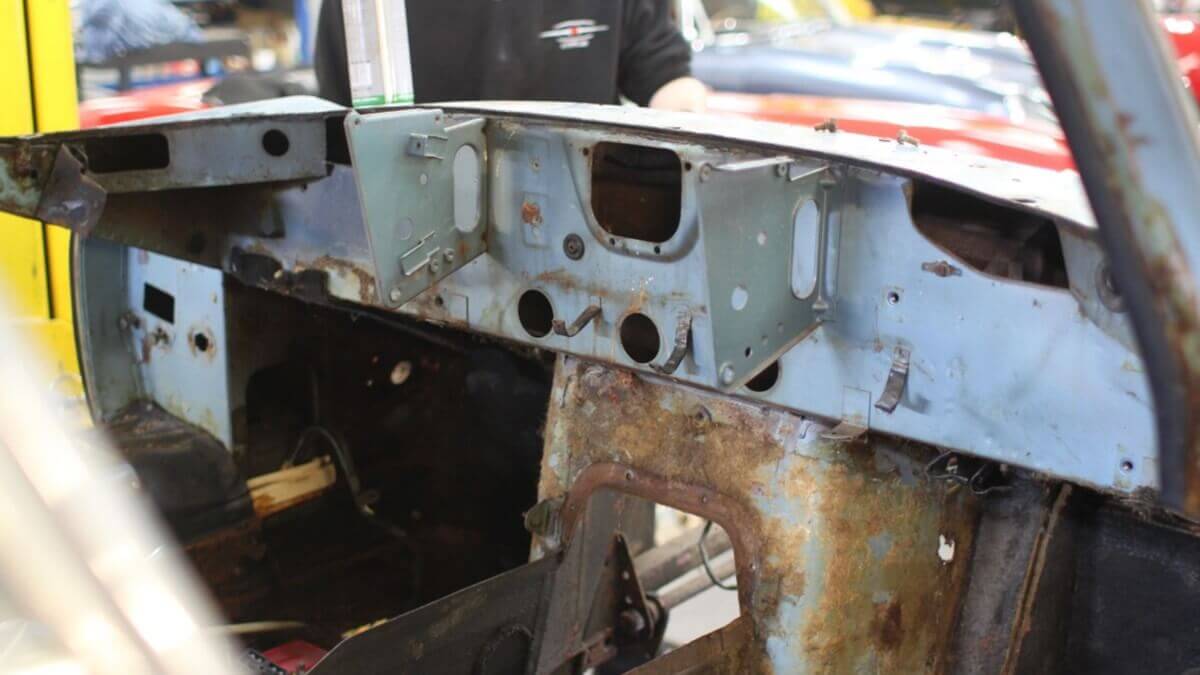 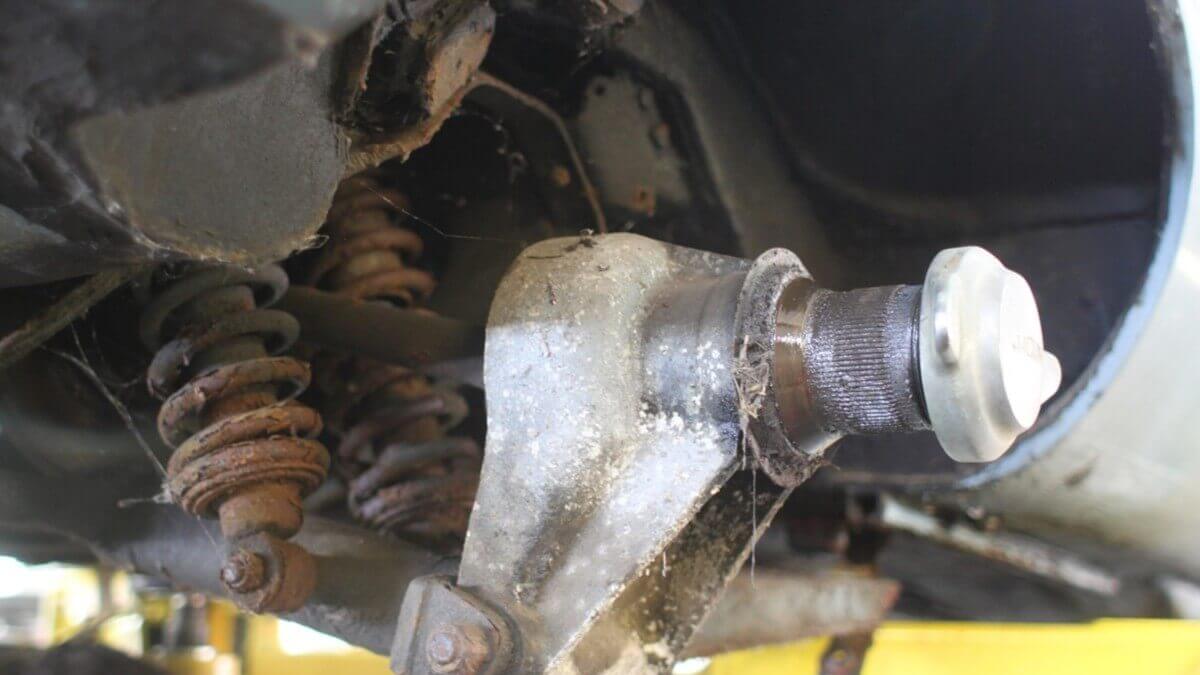 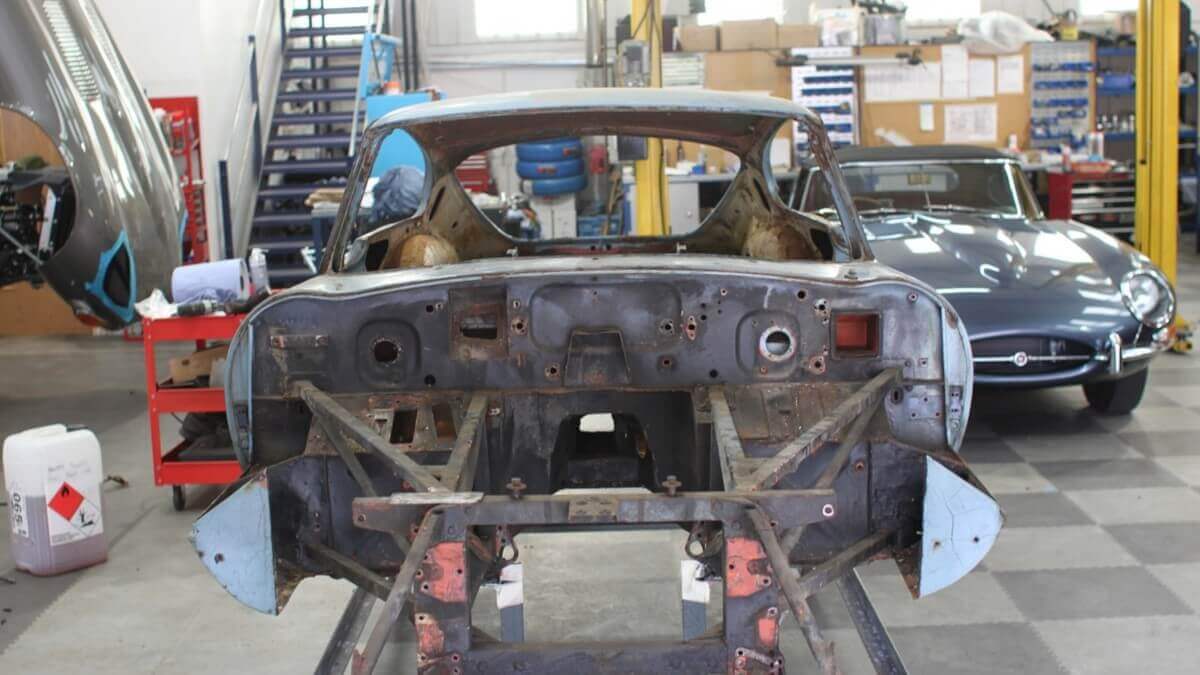 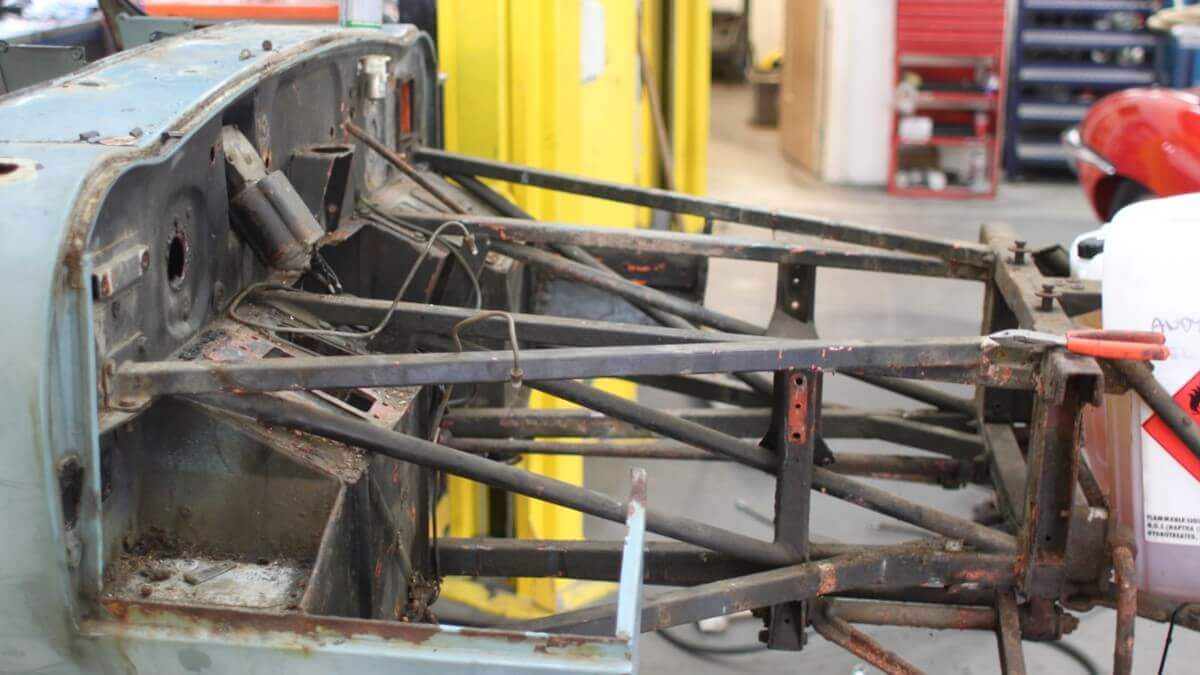 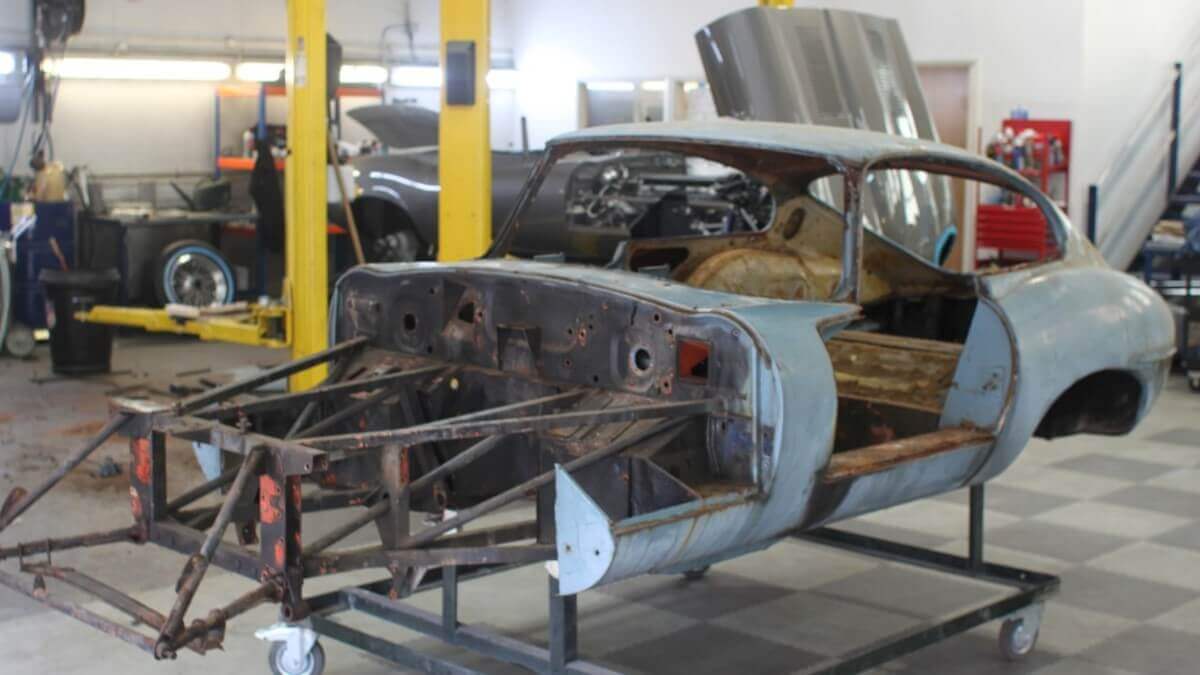 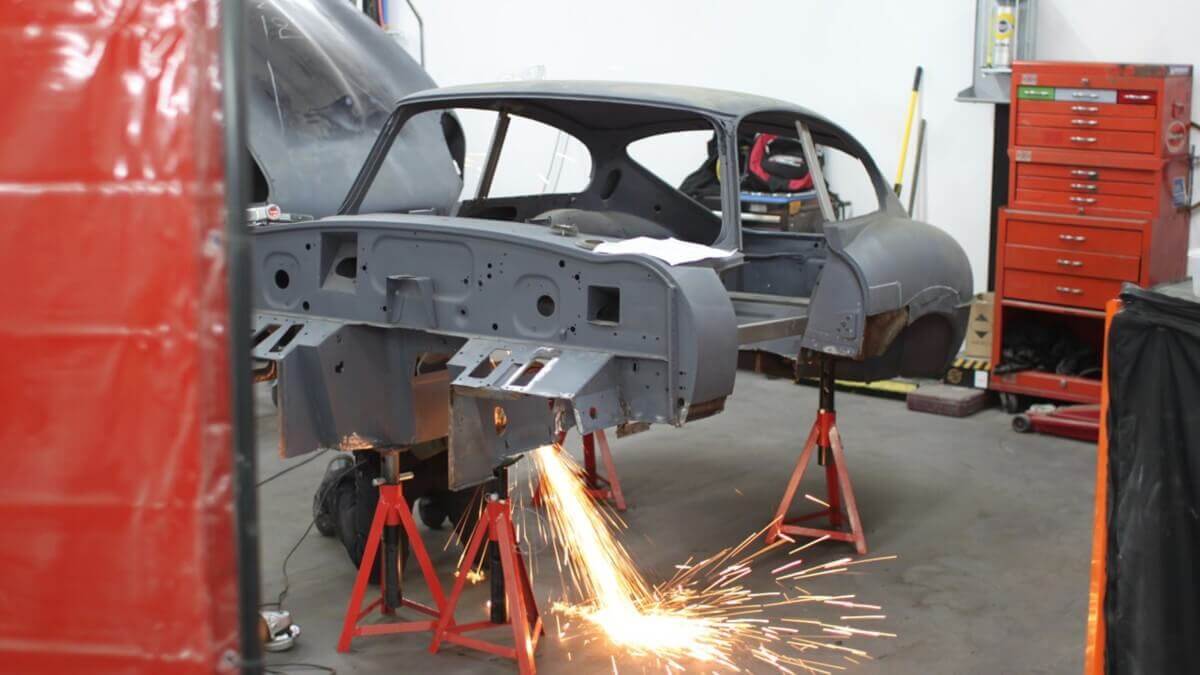 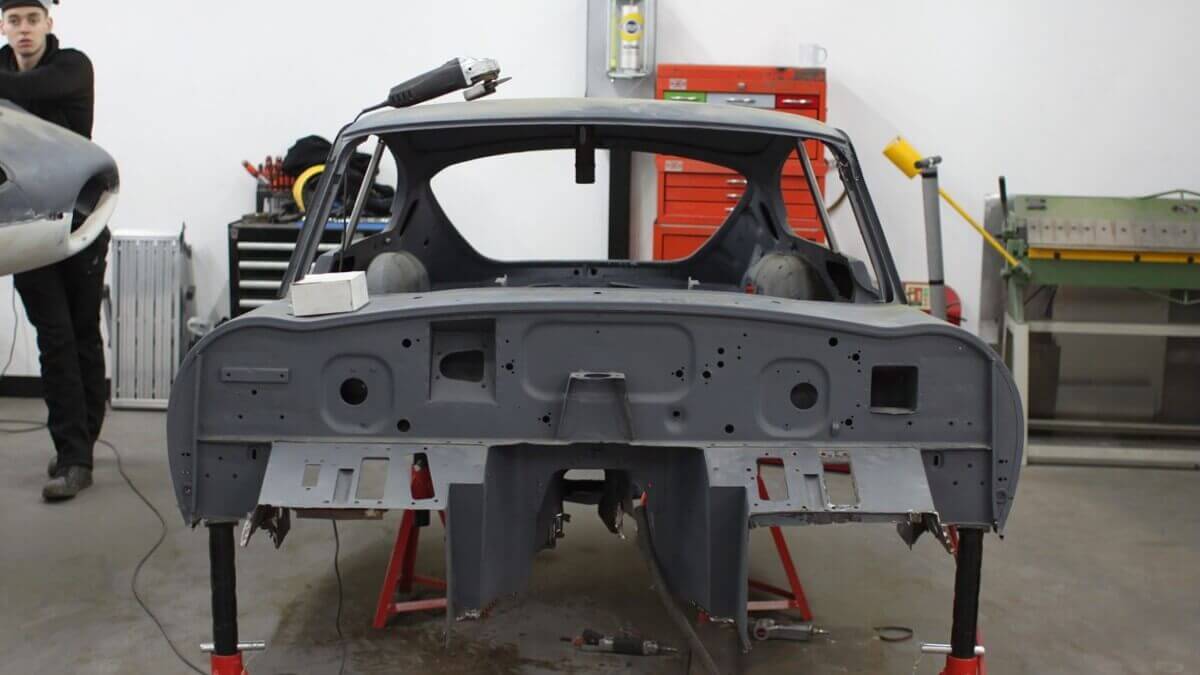 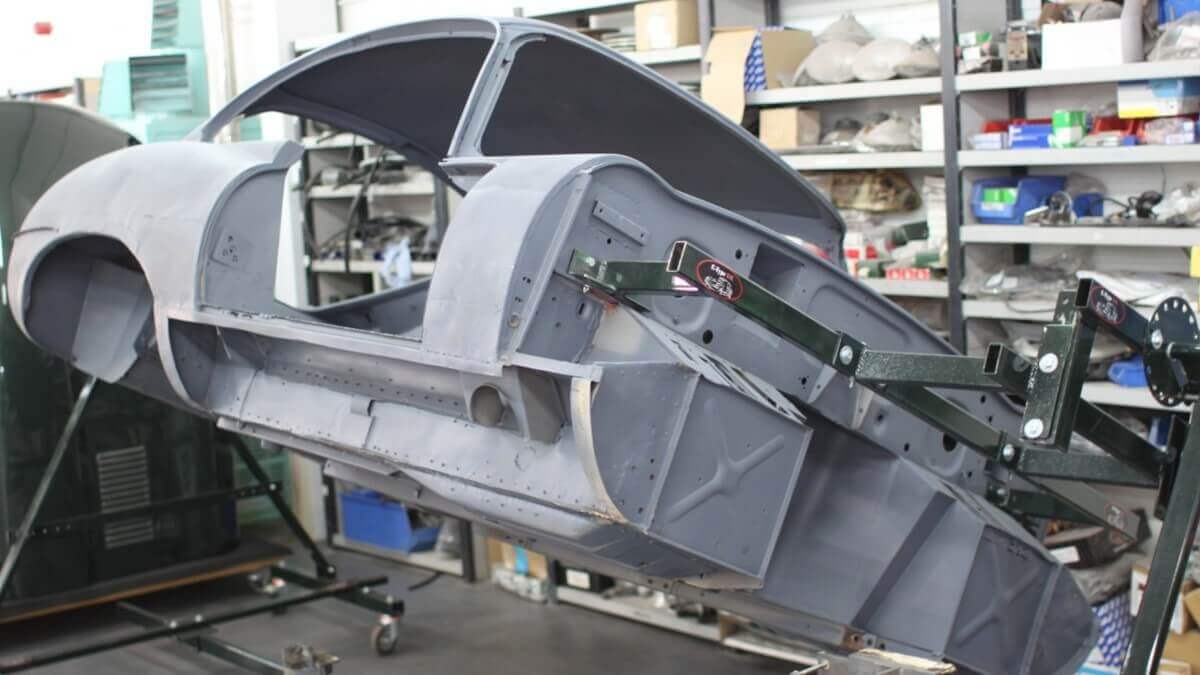 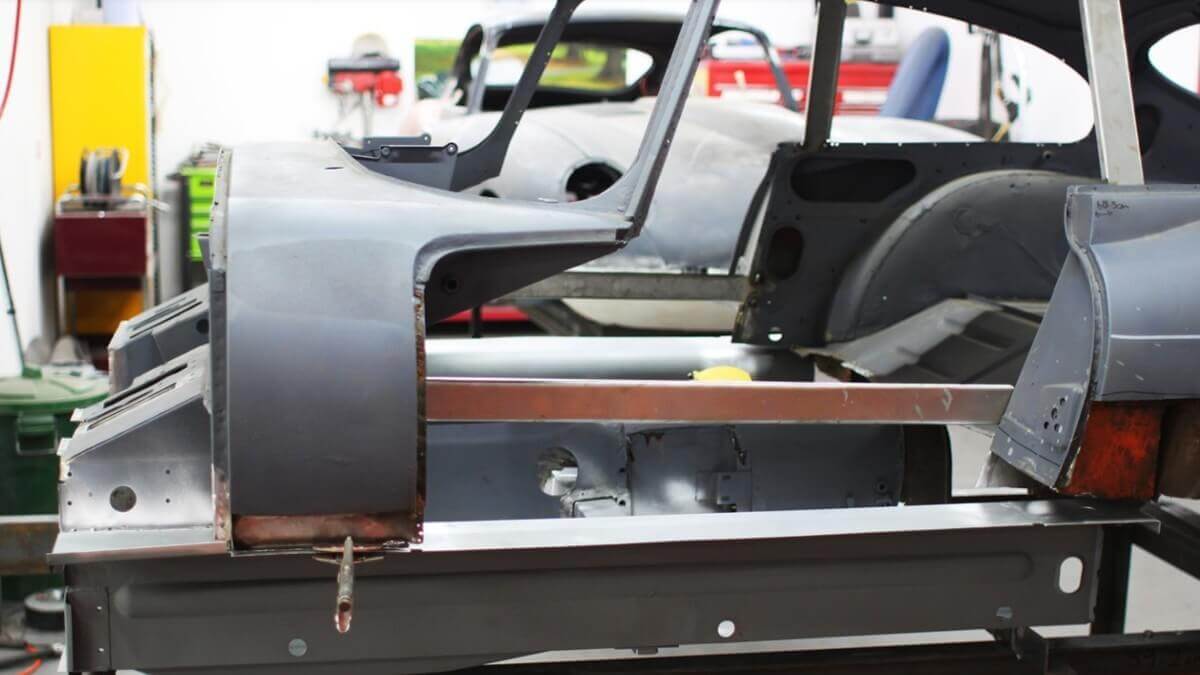 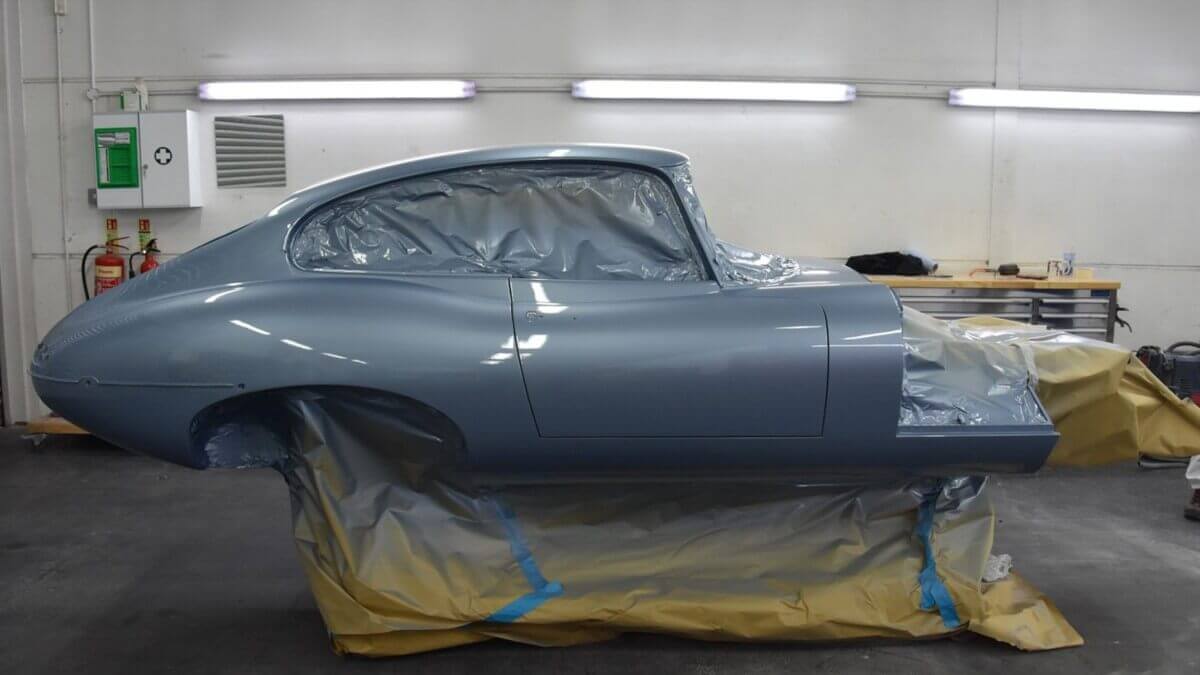 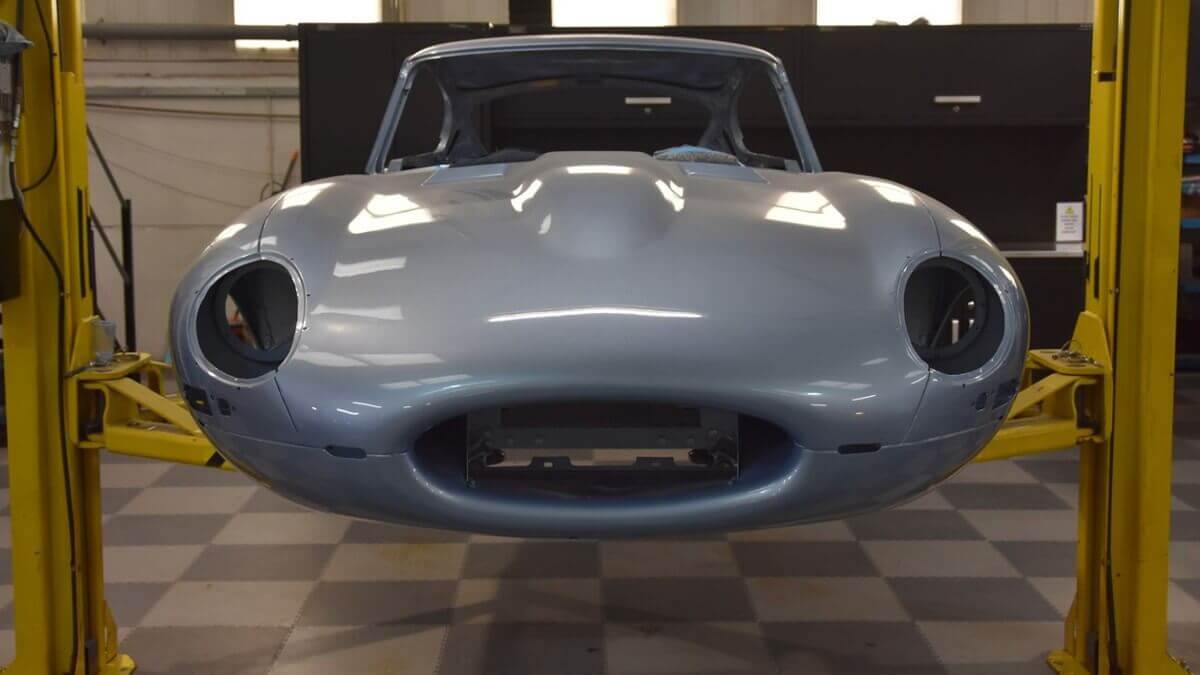 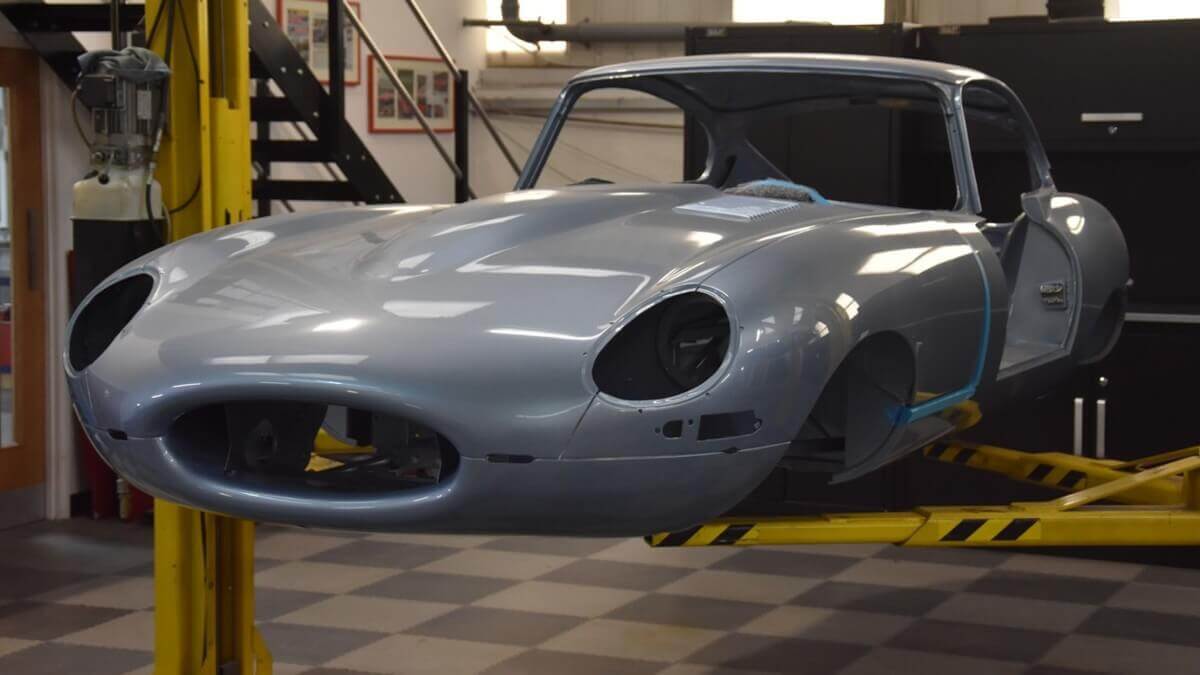 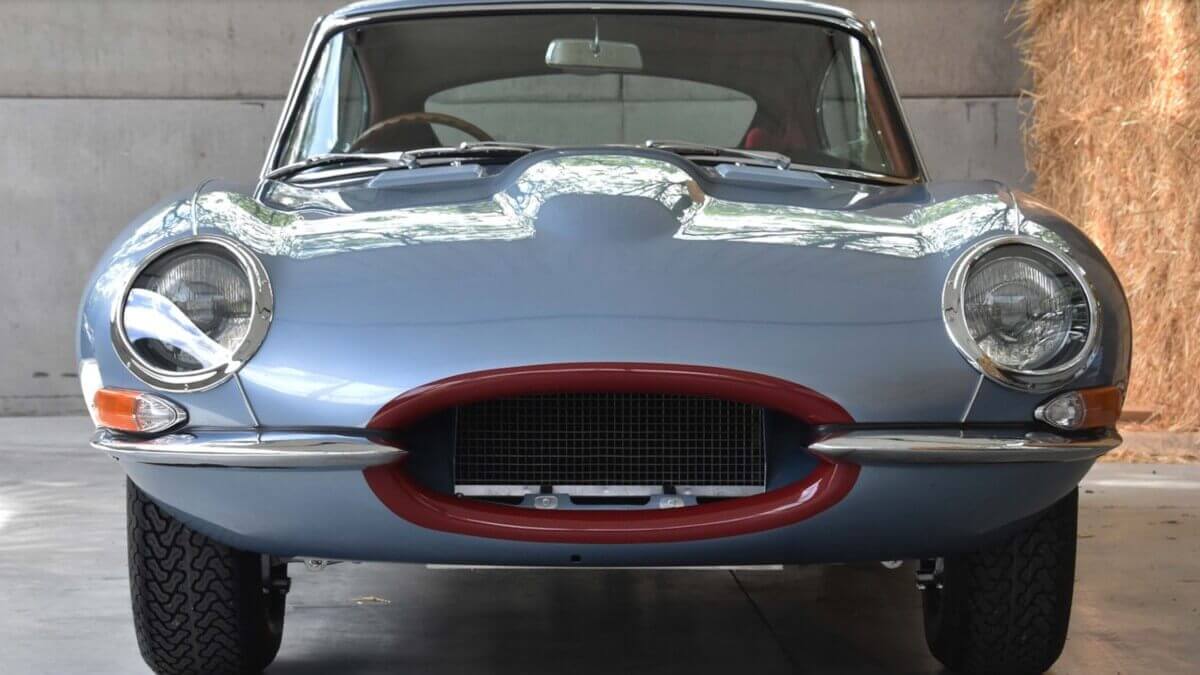 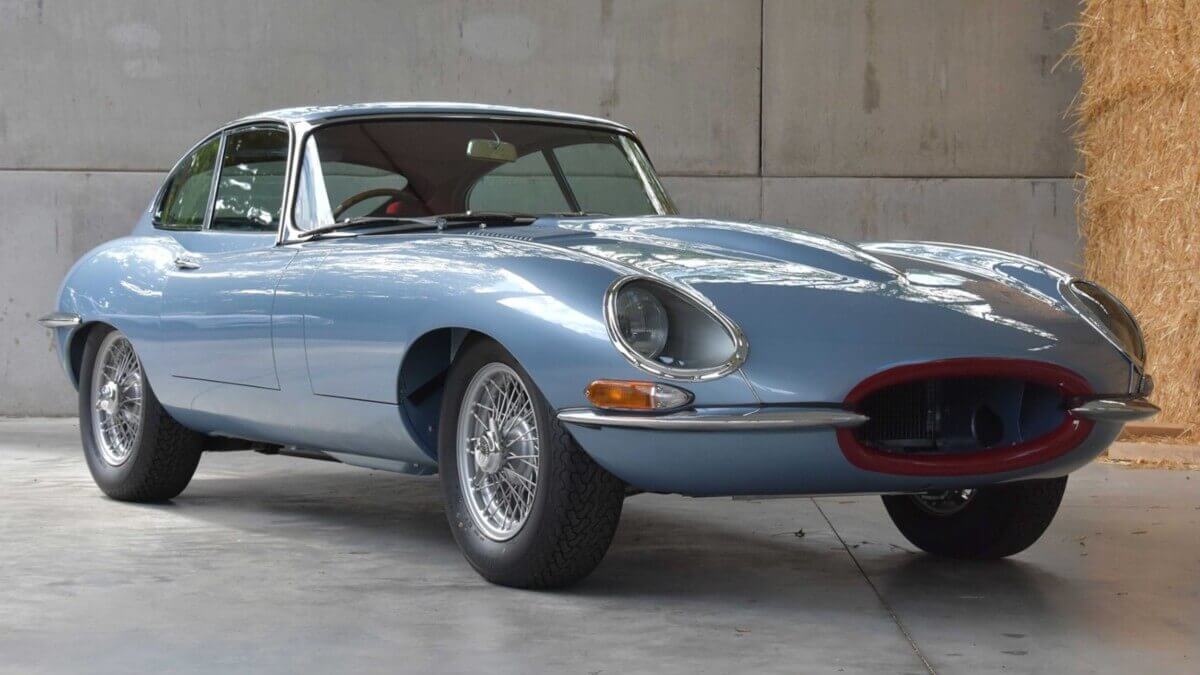 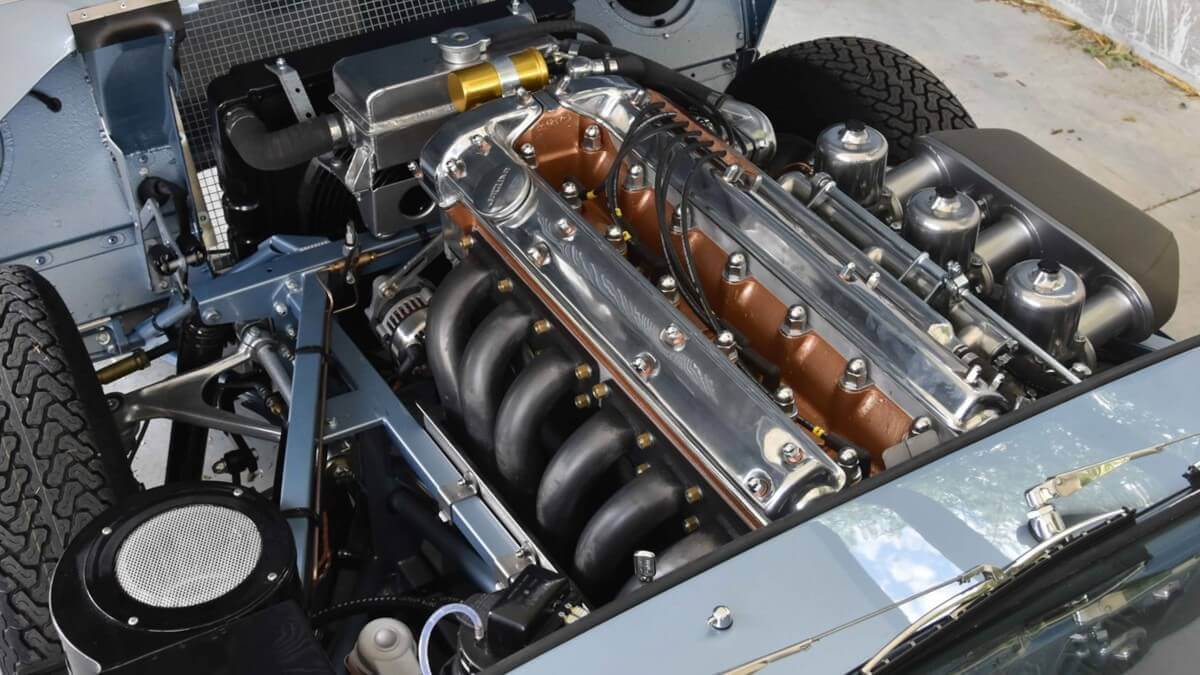 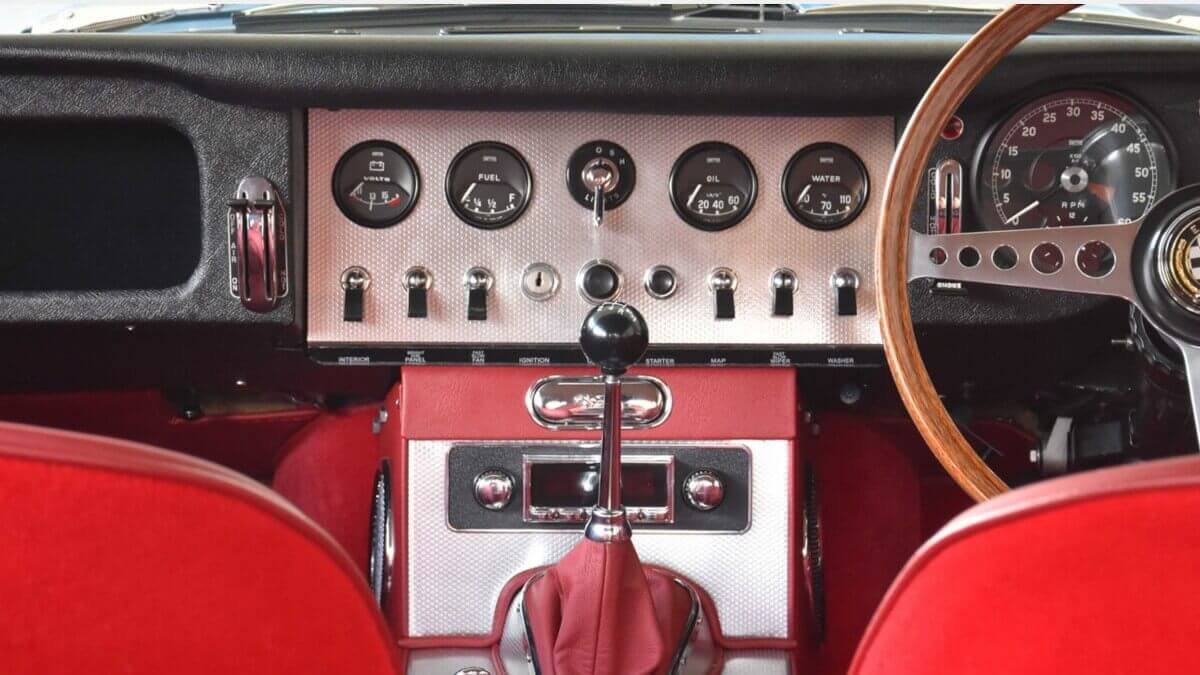 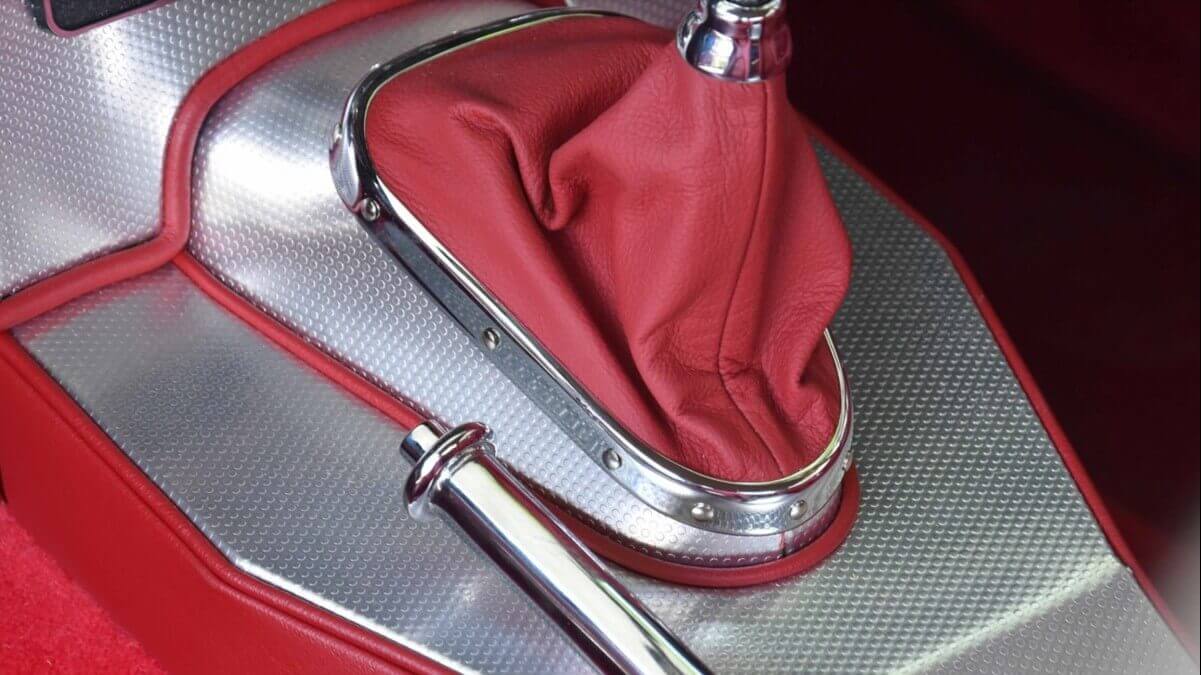 The bodywork, doors and hoods were then handed over to the in-house paint shop. Here, all parts were wet-sanded in order to guarantee a paint finish that is as even as possible. Various cleaning steps were followed by the painting preparations and finally the actual painting process from the primer to the protective clear coats. The new owner chose the original Opalescent Silver Blue, but let his own taste flow into the car by adding a dark red border around the front cooling air opening. This looks a little bit as if the E-Type is wearing lipstick. Similar details were available ex works, for example, on the E-Type Lightweight, which was only built twelve times. The assembly of the sports car then began with mounting the rear axle including improved brakes and the front suspension. This way the car could now be pushed through the workshop on its own wheels again.

The 3.8-liter inline six-cylinder engine was fitted with new camshafts with high-lift cams, a lightend and balanced crankshaft and improved gaskets, which improves driveability and reliability. For the same reason, it was decided to install a new five-speed gearbox, an aluminium radiator and a stainless steel sports exhaust. The final steps in the completion of this E-Type were then taken. In the process, the new owner decided to change the interior from the original dark blue to an oxblood red. Now a beautiful E-Type Coupé is ready to be driven out again as soon as the Corona pandemic is over.