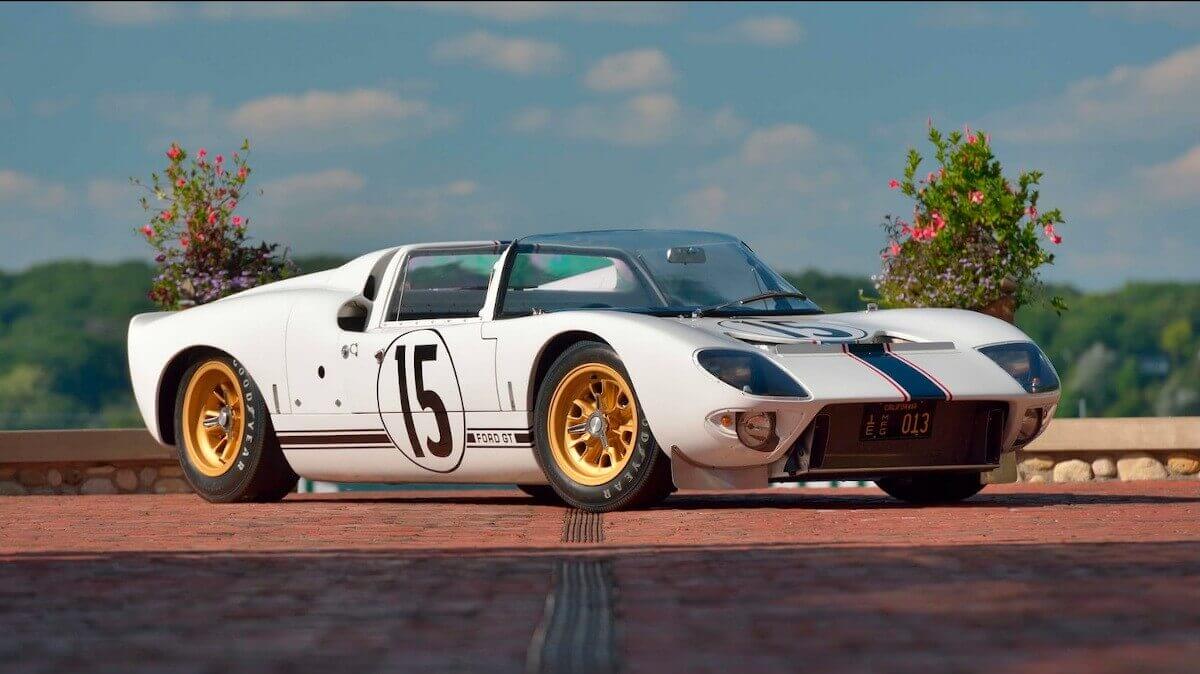 The story behind the Ford GT40 has been told many times. Thus, almost every car fan knows that the development of this racing car was preceded by Ford’s attempt to take over the Italian brand Ferrari in 1963, which was blocked at the last minute by a decisive “No!” by Enzo Ferrari. Ford then decided to pay back the Italians by defeating them in the World Sports Car Championship and especially at the annual highlight of the season, the 24 Hours of Le Mans. Even before the failed Ferrari takeover, the ‘Total Performance Program’ was created, in which all the motorsport activities of the Americans were bundled in Nascar, Drag Racing and sports cars. With the motto ‘Win on Sunday, sell on Monday’ they wanted to convert the expected racing successes into better sales figures. Since they had never competed with their own cars on European race circuits before, they had the idea of buying Ferrari. Now, after this deal was stopped, Henry Ford II, called ‘The Deuce’, gave clear instructions: “If I can’t buy Ferrari, I’m going to beat Ferrari,” an ordered his General Manager Lee Iacocca: “Win at all costs!”

So in 1964, under the leadership of Lola boss Eric Broadley and team boss John Wyer, the completely newly developed GT40 was created in the newly founded subsidiary Ford Advanced Vehicles Ltd. (FAV) in Slough, Great Britain. After the first test runs in the same year, the GT40 was sold to private teams from 1965 onwards. As was customary at the time, a glass-fiber plastic body was mounted on a tubular steel frame. While the Mark I had a 4.2-liter V8 engine, the Mark II originally came with a 4.7-liter engine, followed by a seven-liter version for Le Mans 1966. For 1967 an independent, more streamlined body for the Mark IV was created. Less well known is the fact that between December 1964 and mid-1965 a total of five GT40s were built as Competition Roadsters. The first two cars served Shelby American for the 1965 season opener in Daytona, where the first overall victory of a Ford GT40 was achieved with chassis GT/103. Ford ordered the following two Roadsters for test and development purposes, whereby chassis number GT/109 was something special according to the production documents: “Dearborn Experimental Car with 3″-longer chassis – not now required”. Interestingly, this vehicle also received a removable rollbar. 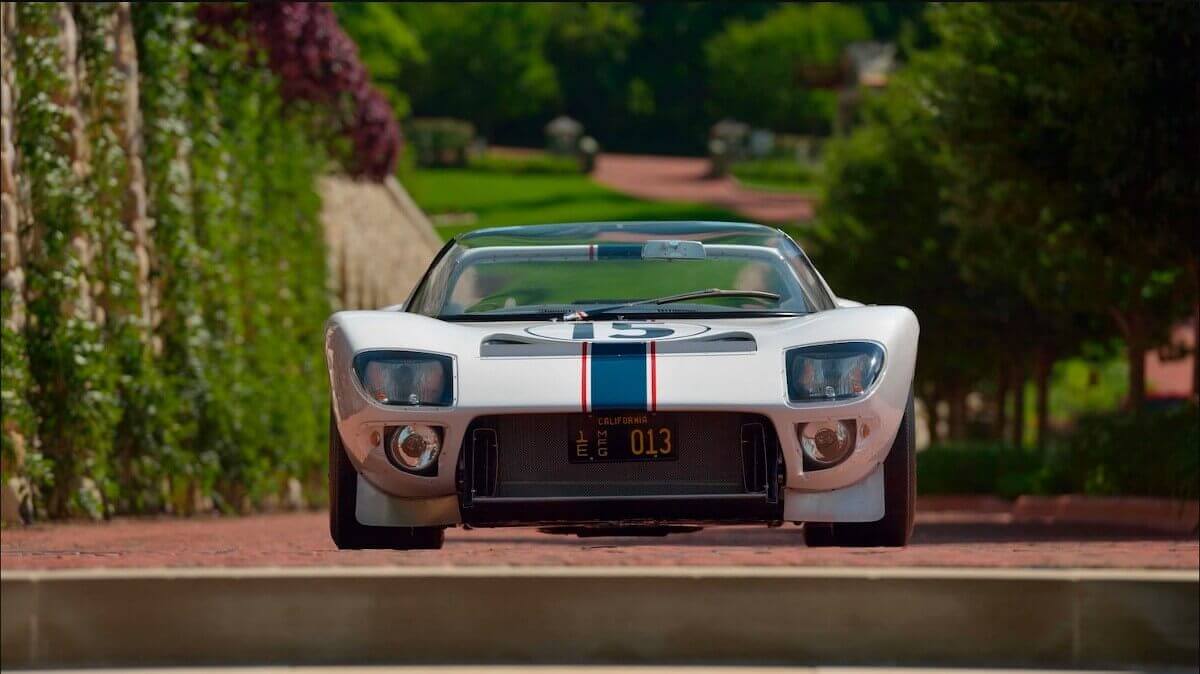 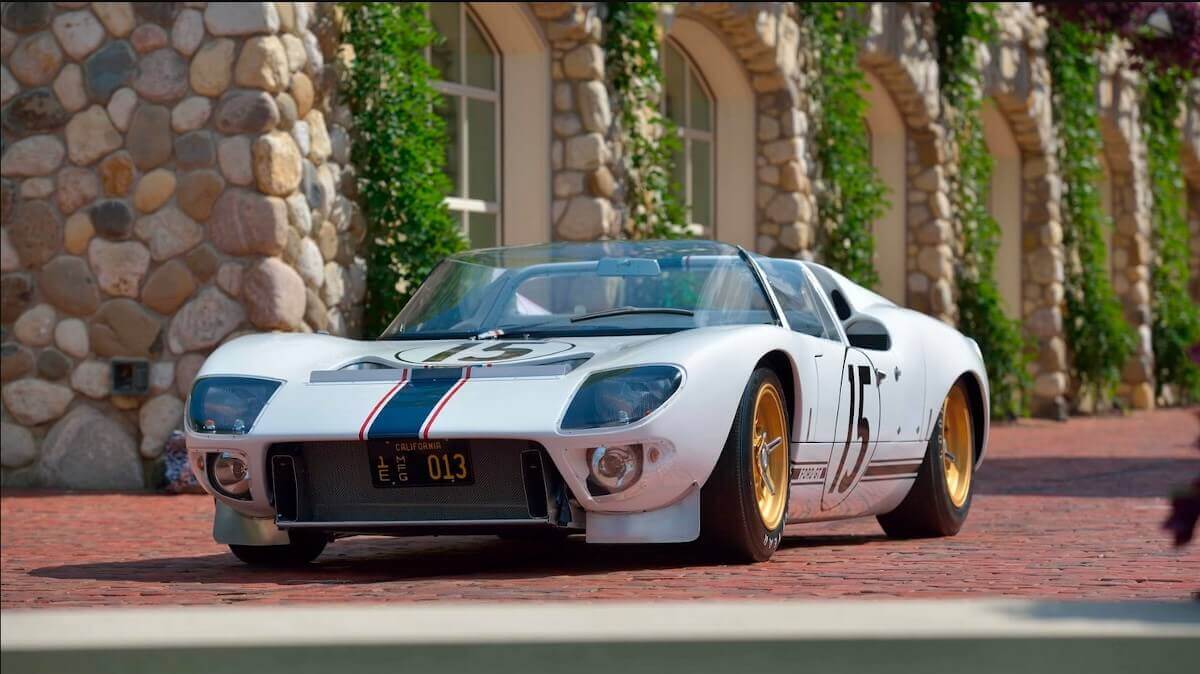 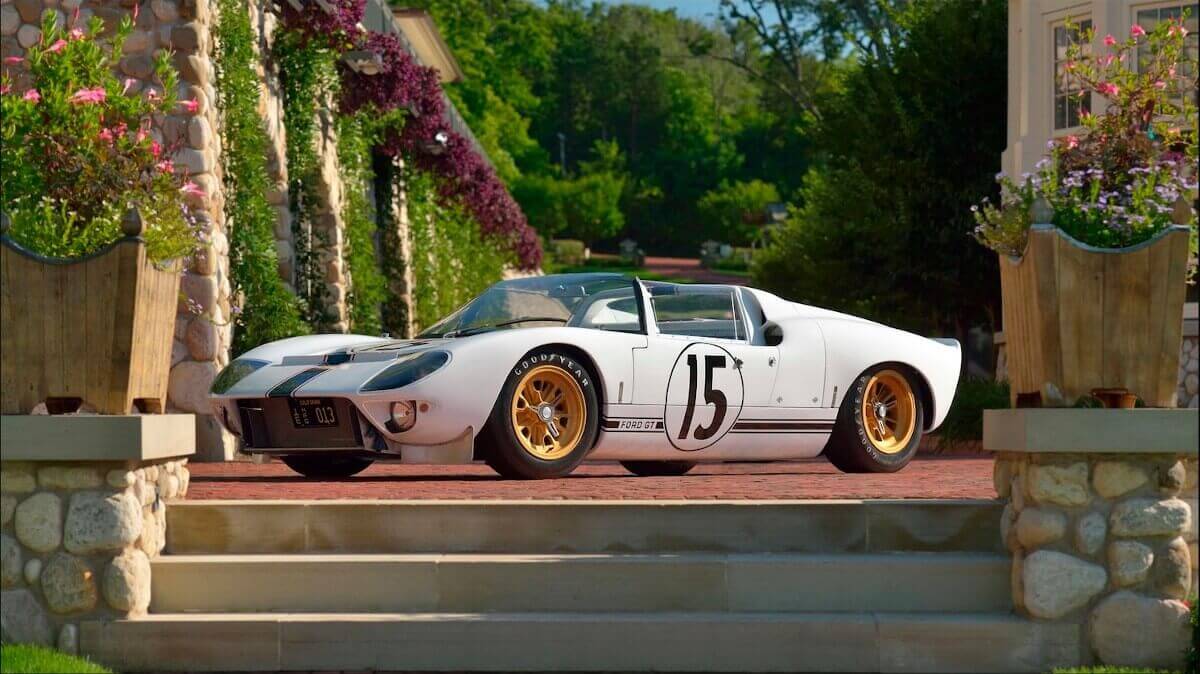 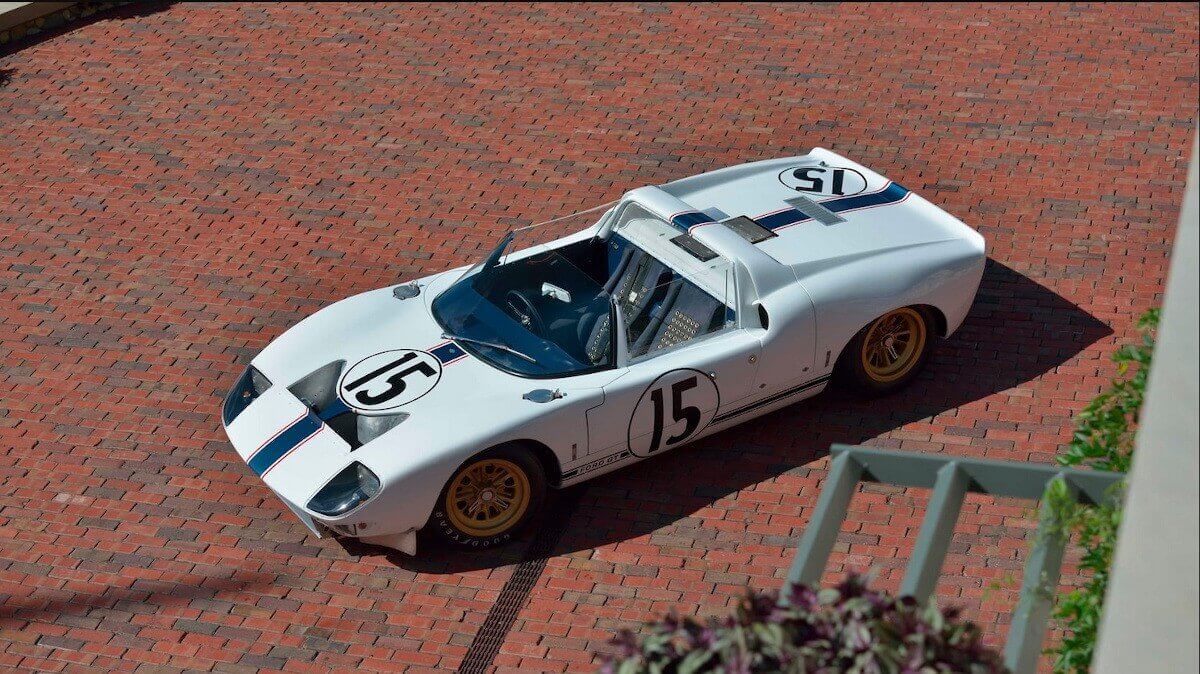 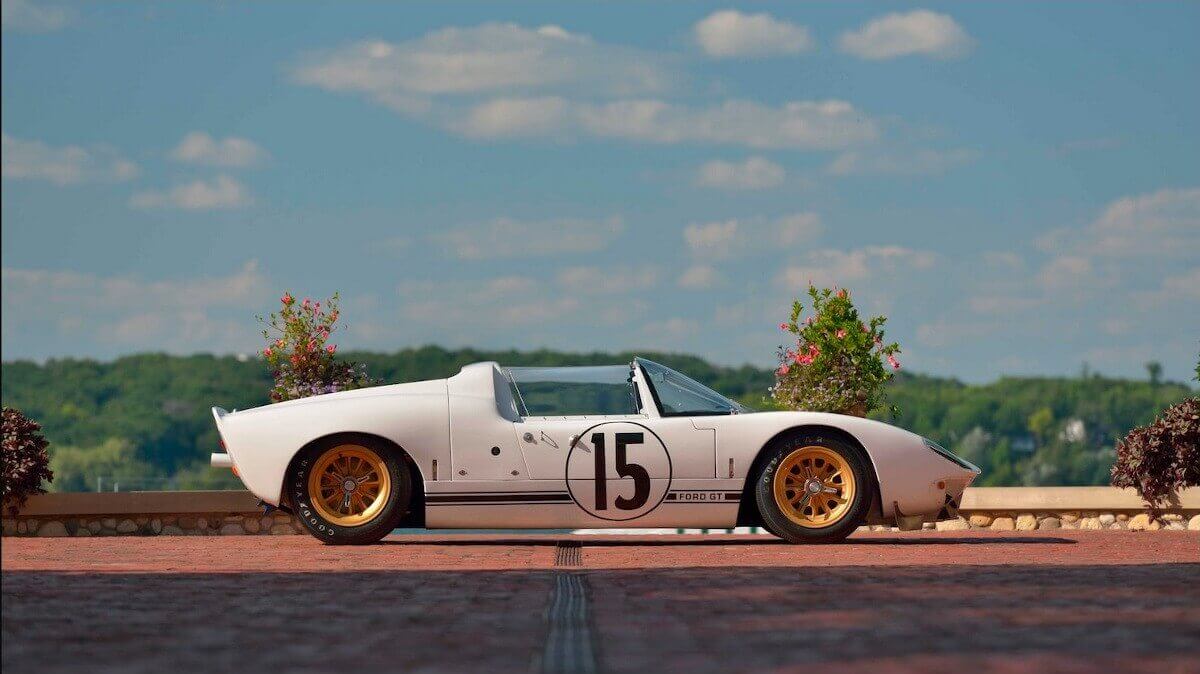 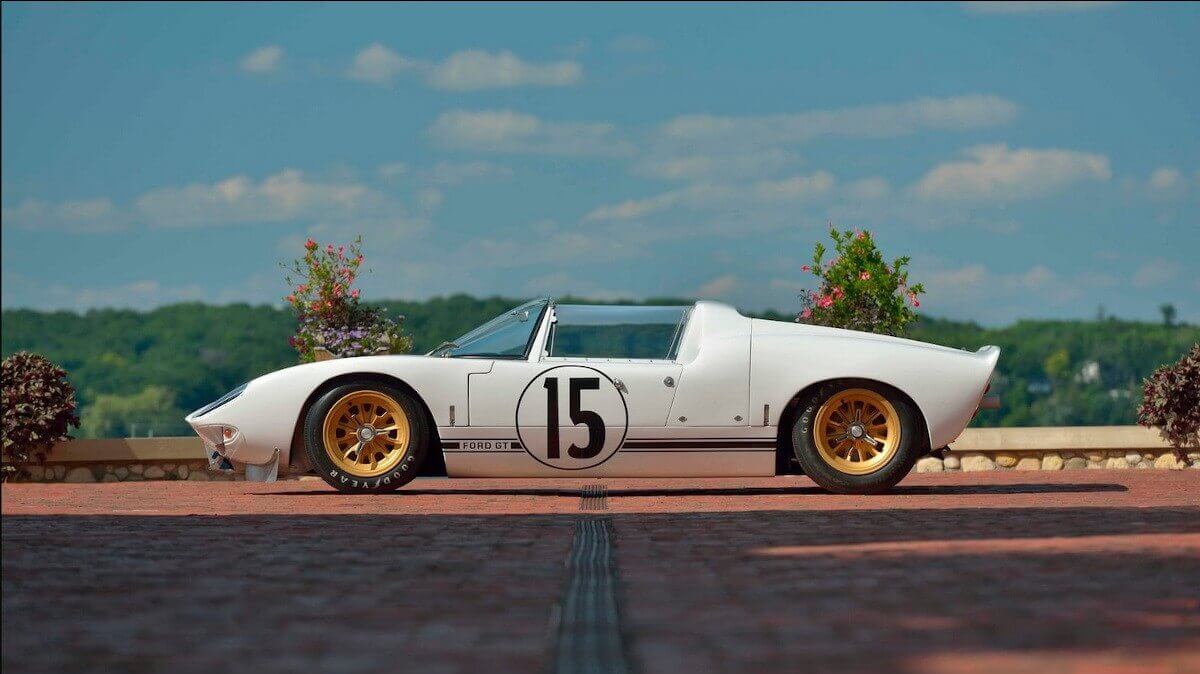 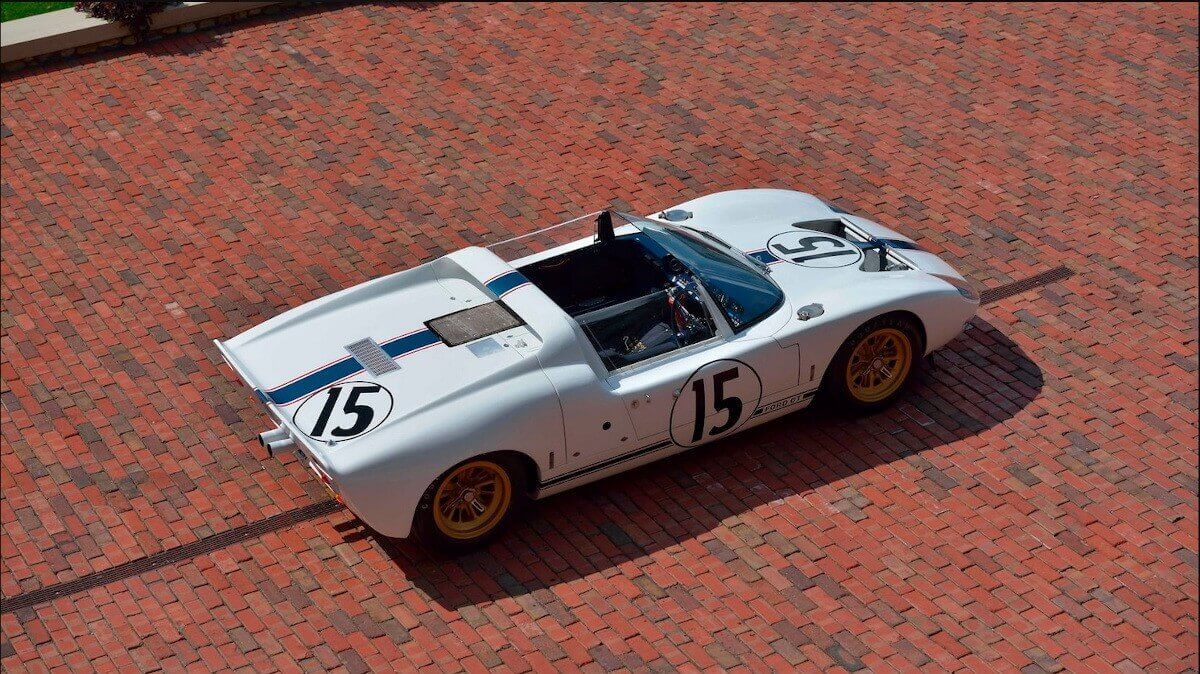 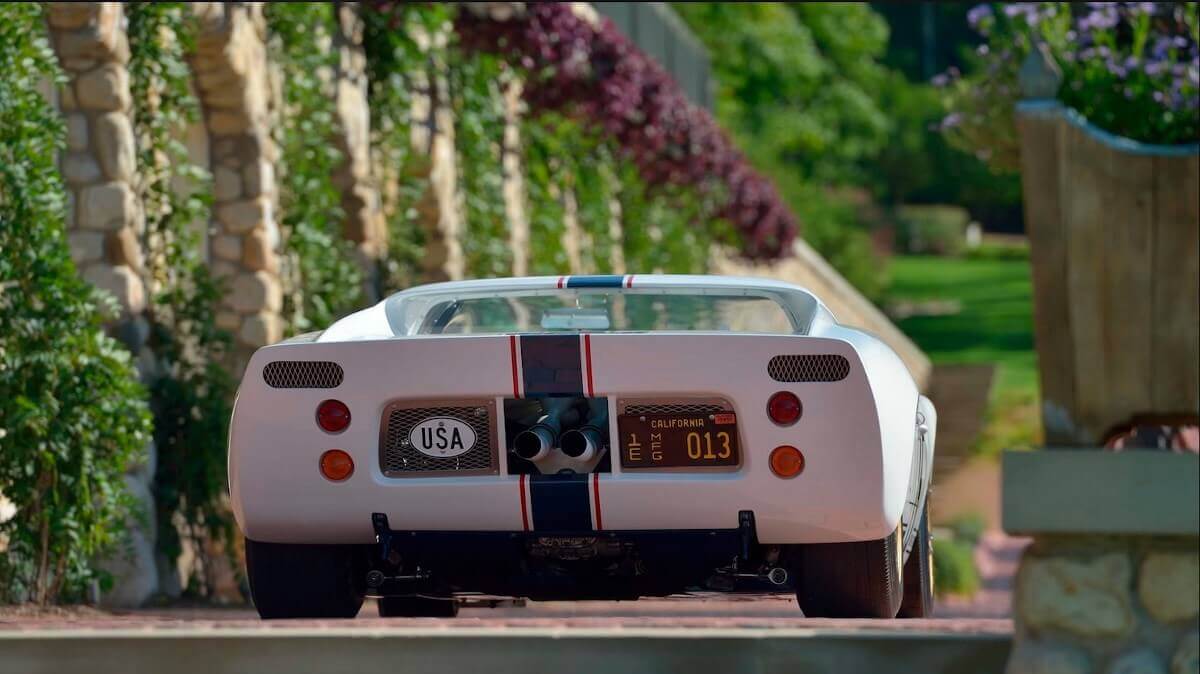 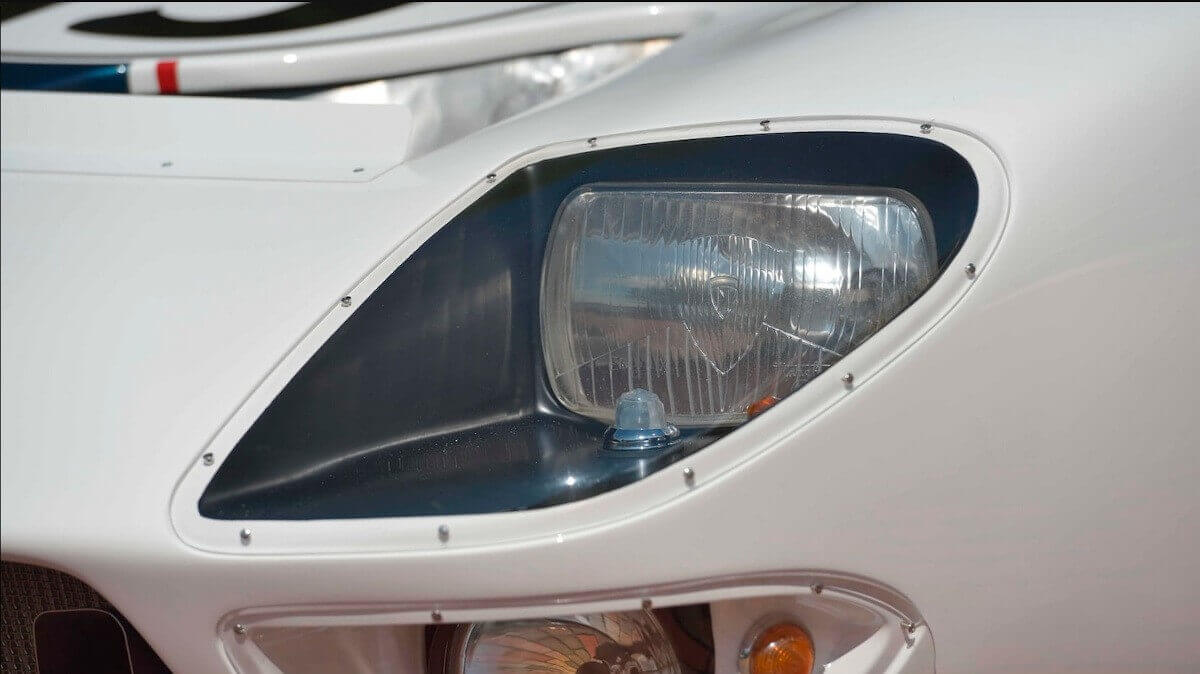 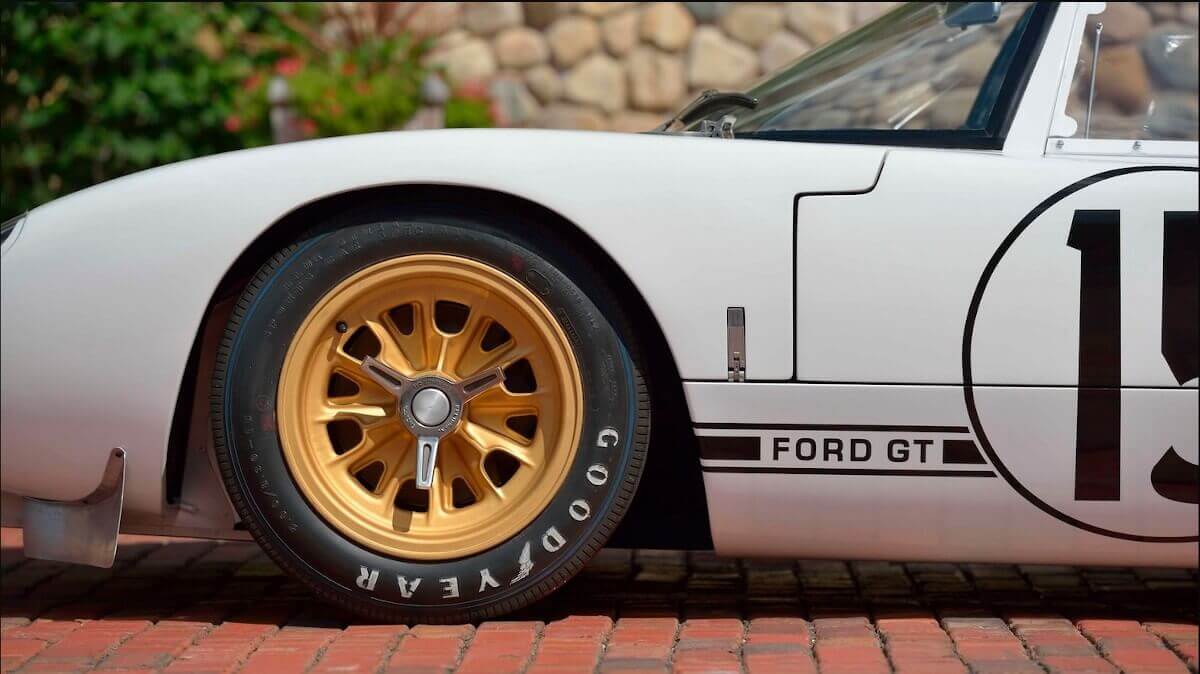 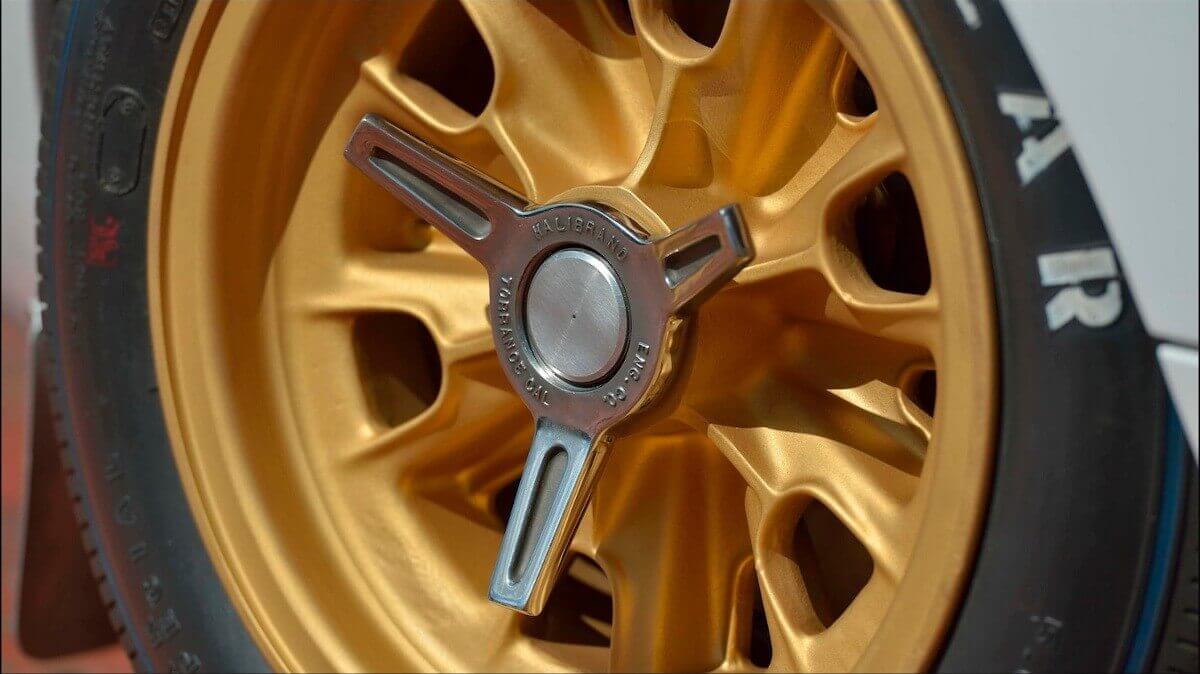 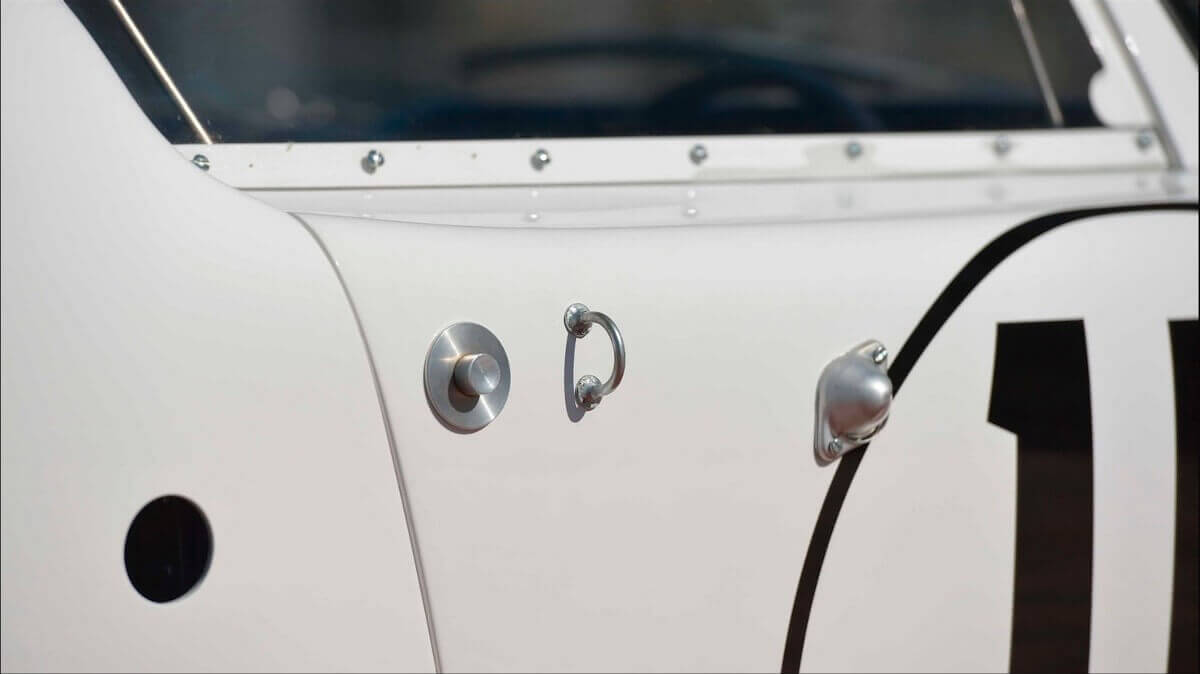 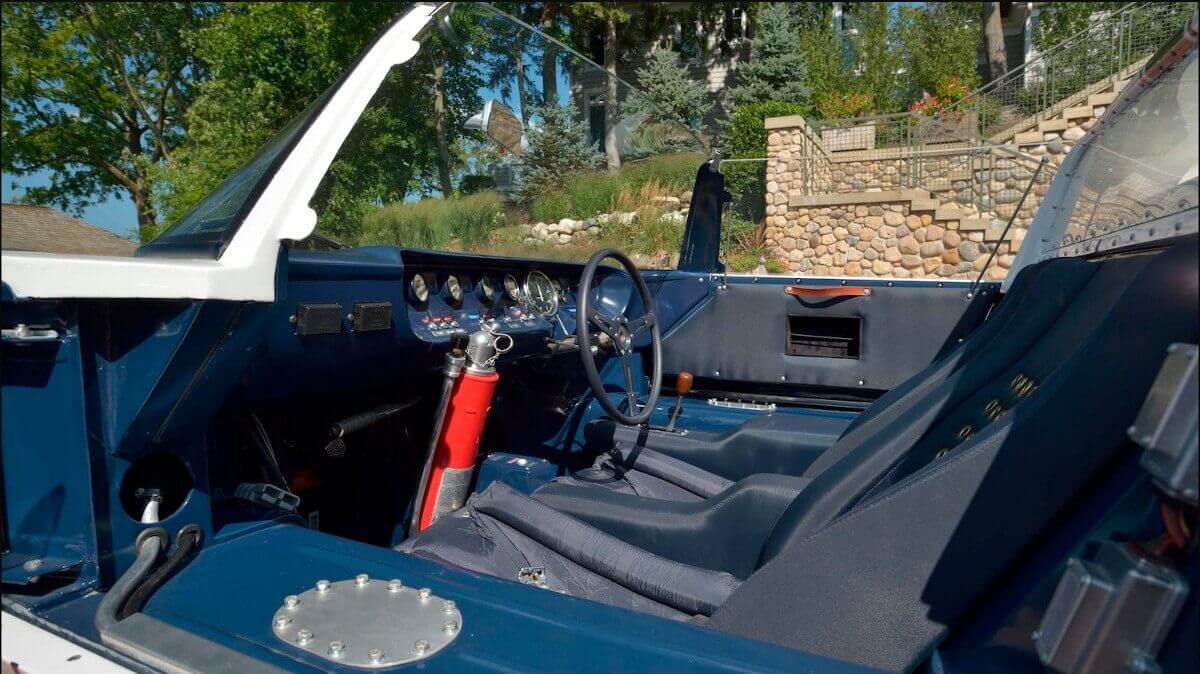 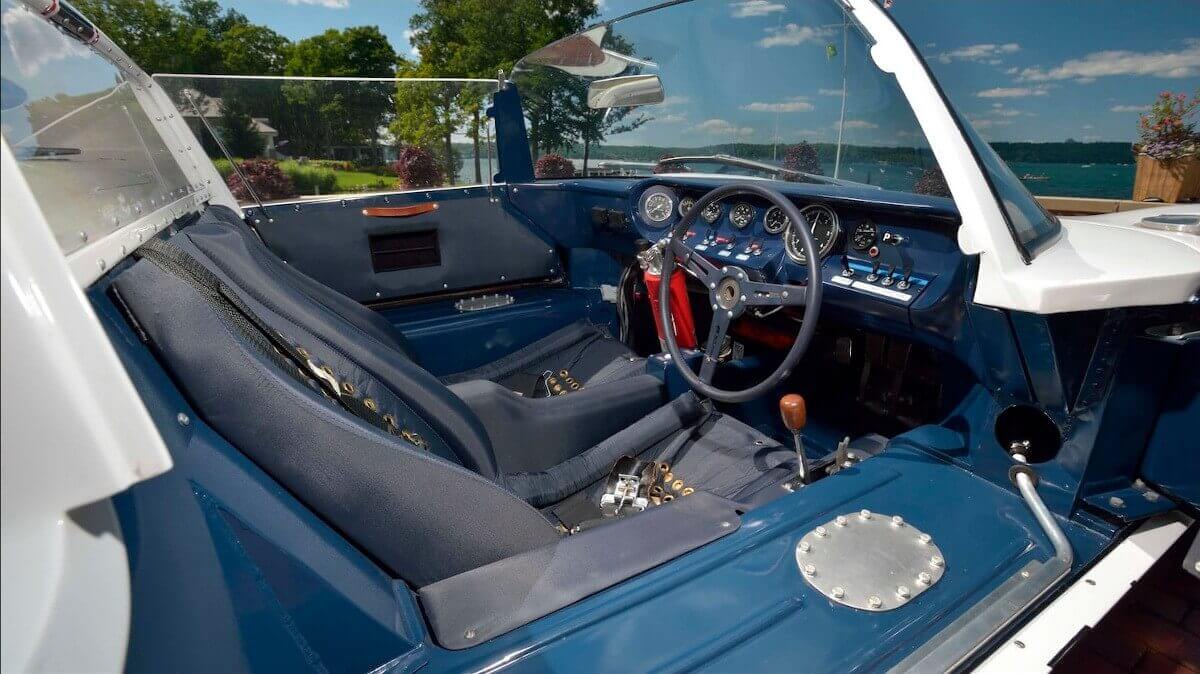 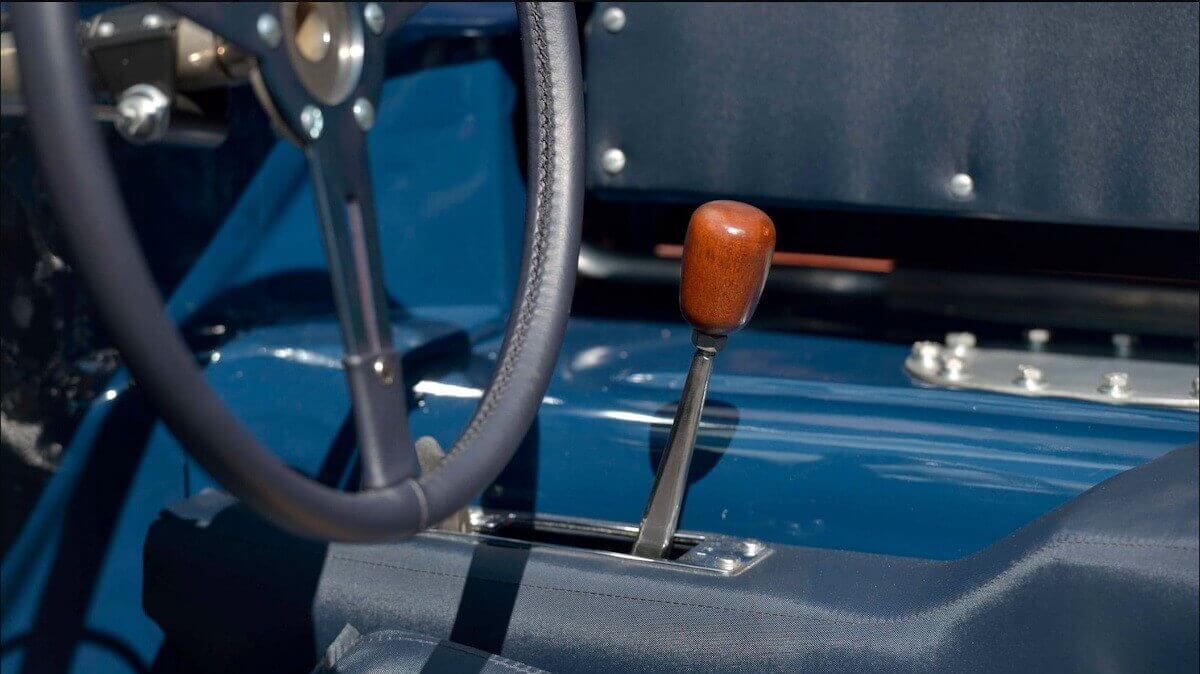 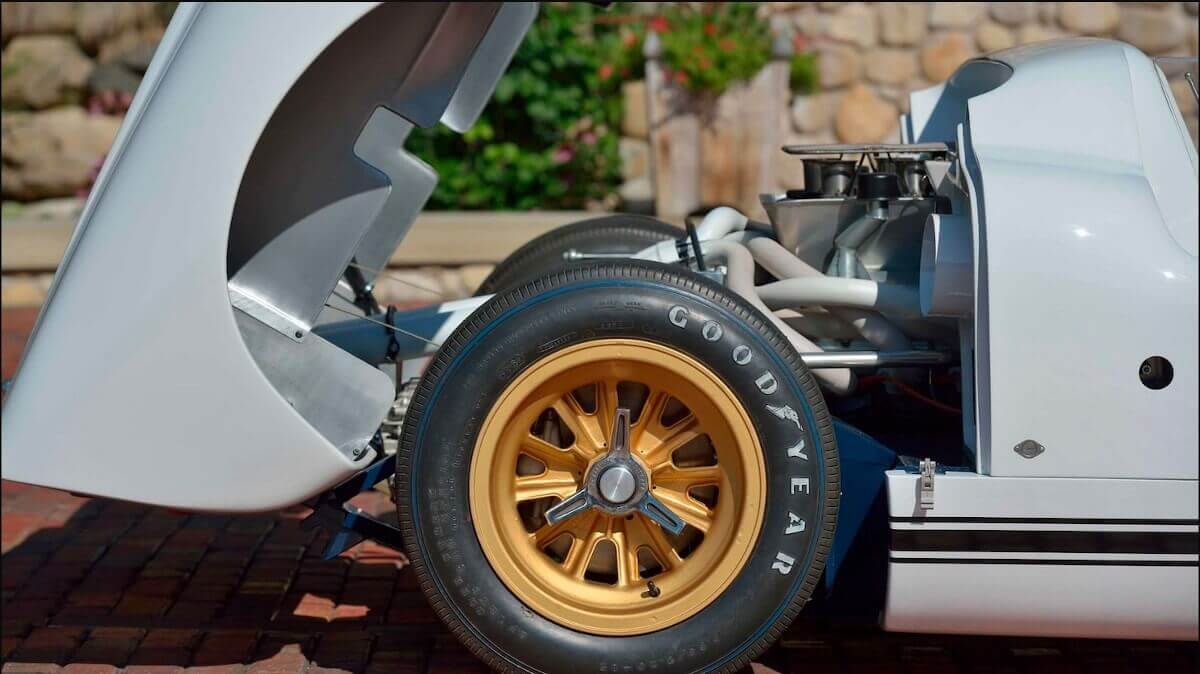 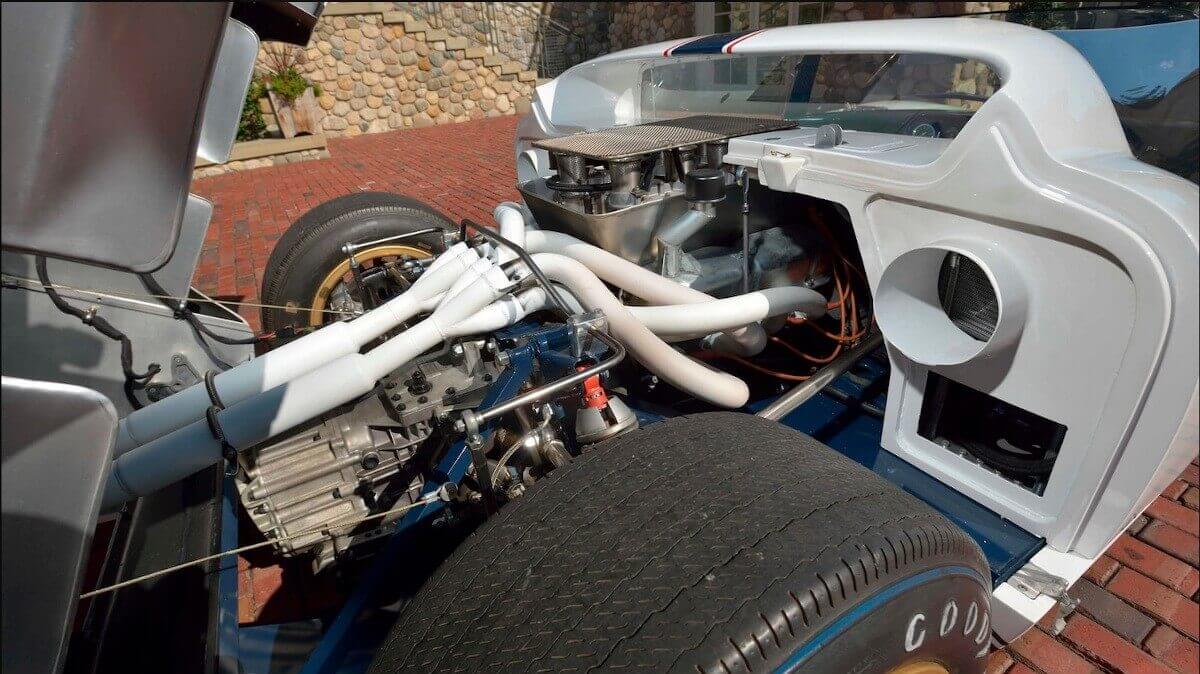 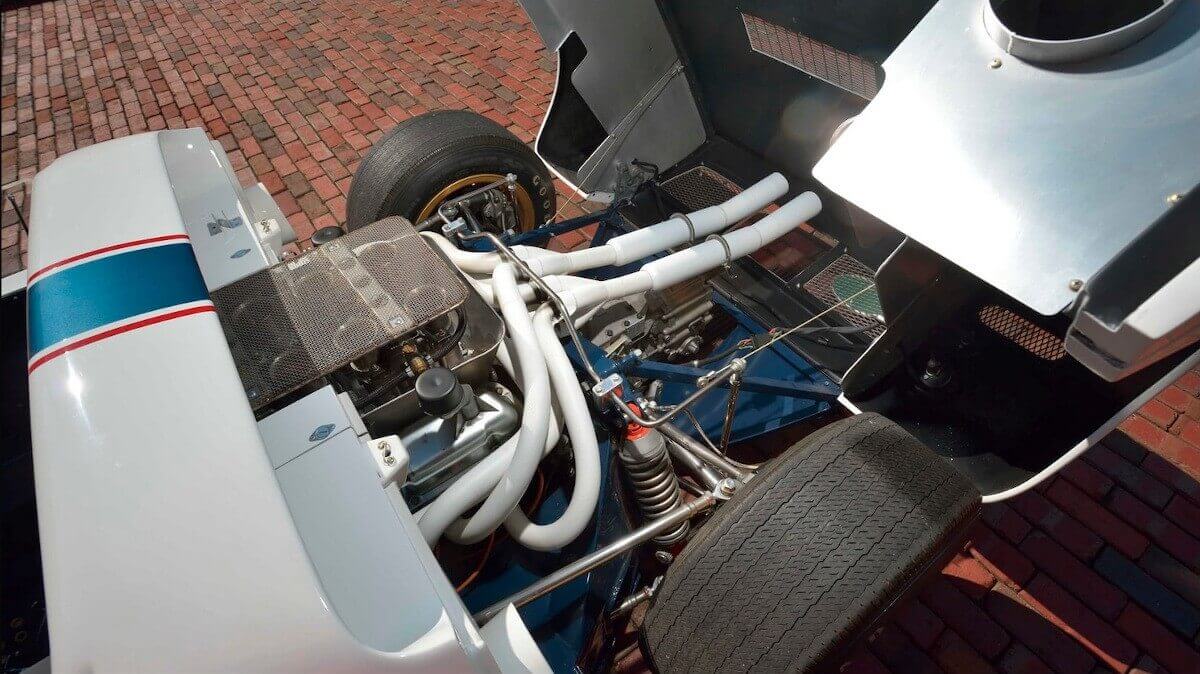 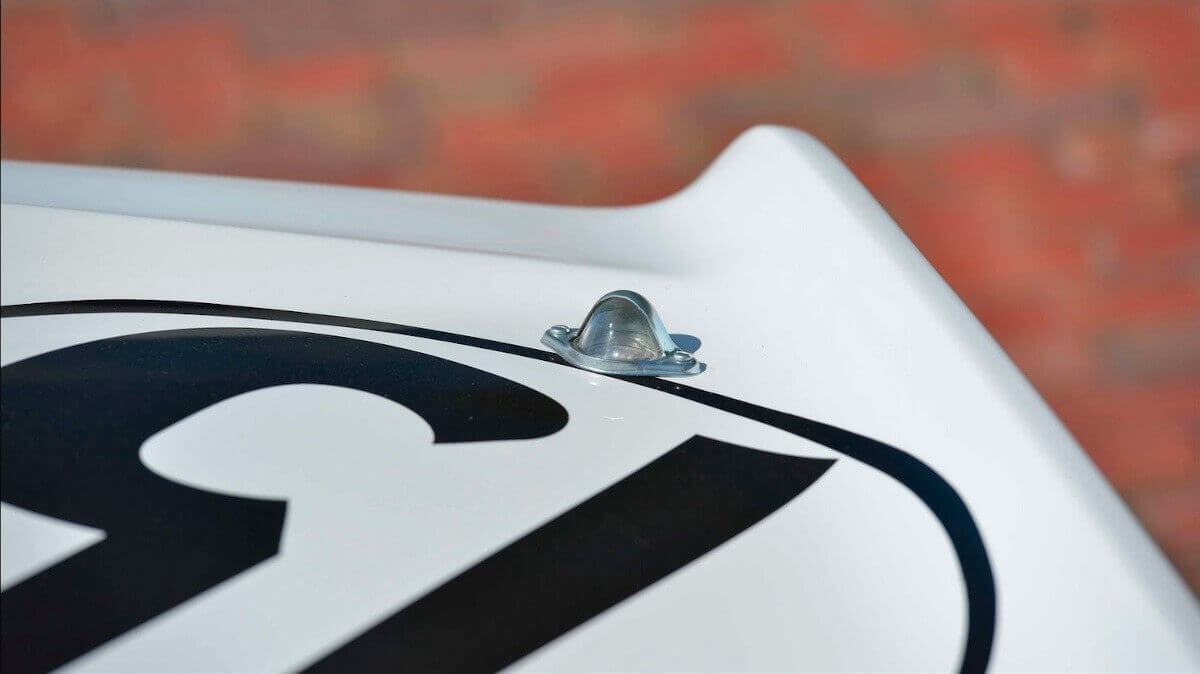 While the sister vehicle GT/108, built at the same time, was converted to a road car, FAV delivered the GT/109 to Shelby American in March 1965 to have it prepared for the 24 Hours of Le Mans, where it was to be used by the Shelby-backed Ford of France team. For this purpose, the racing car received numerous modifications, which had already been demonstrated by the Competition Roadster in Daytona. In addition to magnesium rims, these included the vertical attachments under the headlights and a 4.7-liter Cobra engine with ZF five-speed transmission. For the first time, side-mounted engine oil coolers, air outlets above the taillights to reduce pressure air in the rear wheel arches, and a higher rear spoiler for more contact pressure were installed. On the outside, the car was painted in the colors of the French Ford division with white basecoat, a wide blue racing stripe and narrow red bordering stripes. Arriving at Le Mans it was assigned with start number 15 and was driven in the training session by Jo Schlesser and Andre Simon. For the actual race, the driver pairings of the GT40s were changed, whereby Maurice Trintignan and Guy Ligier should took turns in the Roadster. After only eleven laps the race ended with a gearbox damage.

After the race the car went back to Shelby American for repair and then to Kar Kraft to develop a new automatic transmission for the Ford Indianapolis V8 engine with Weber carburettors. Kar Kraft also tested new brake components and various other experimental parts on this vehicle. Equipped with some of these modifications the sister car, Roadster chassis GT/110, won the 12 Hours of Sebring. After a successful test program, GT/109 went back to Shelby, was converted back to the Le Mans outfit of 1965, stored for about two years and then moved to a Ford Motor Company warehouse. There the stuntman and automotive customizer Dean Jeffries from California discovered the GT40 Roadster by chance during a visit of Ford Racing Director Jacques Passino. He asked him if he could buy the car, to which Passino replied: “No problem, you can have it. We’re done with the GT Roadster program.” Jeffries was the one who painted the ‘Little Bastard’ lettering on James Dean’s Porsche 550 Spyder and, as an official painter for Carroll Shelby, was responsible for numerous color changes of the Cobra CSX2000 prototype for each new magazine road test to give the impression that production of the Cobra was already underway. GT/109 was restored by him and first equipped with an Indianapolis engine, before Carroll Shelby gave him a 4.7-liter engine with the words: “We used this engine at Le Mans in GT/109.”

After the death of Dean Jeffries, his son kept the car until 2013 and then sold it to Dana Mecum. Under the direction of Harley Cluxton III, she had GTC Mirage Racing carry out a Concours quality restoration. In 2016, the car entered the Pebble Beach Concours d’Elegance and took second place in its class – beaten only by the original winning car of the 1966 Le Mans race, a GT40 Coupé. As part of this year’s Monterey Car Week, Mecum Auctions is now looking for a new owner for the only Ford GT40 Competition Roadster that ever started in Le Mans. No information was given about the expected hammer price, but we assume it will be an eight-digit sum.