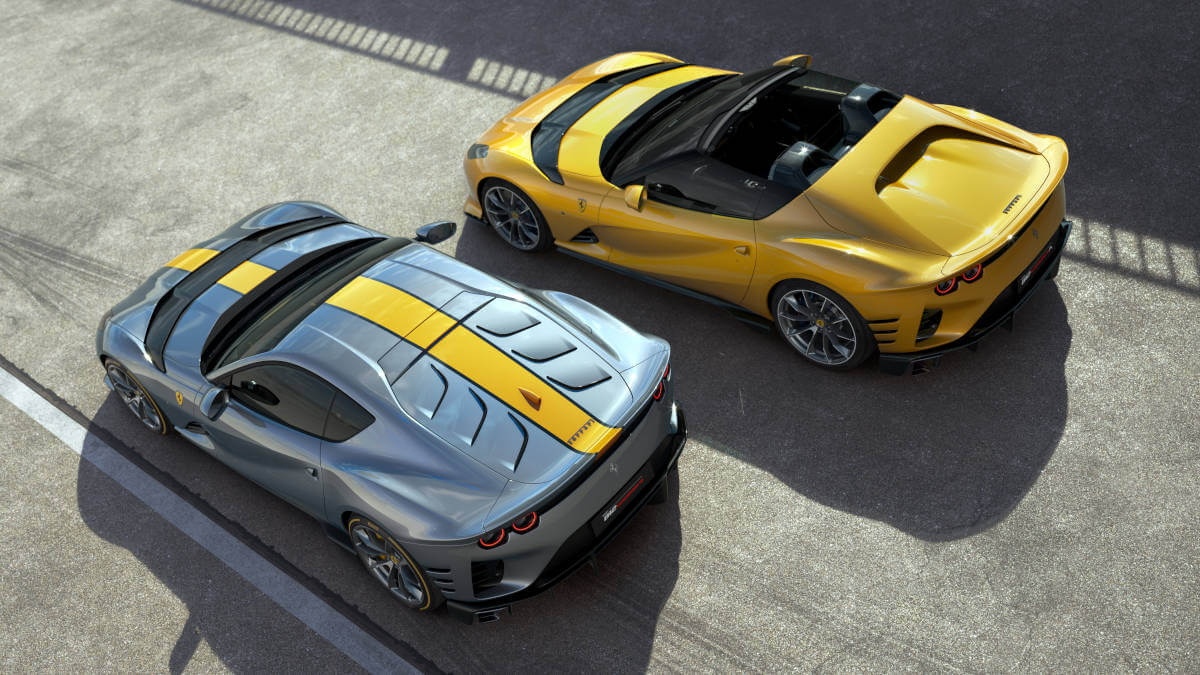 The new V12 supercar announced by Ferrari for today has a name. Actually, two, as there will be two body variants. It is called 812 Competizione as a coupé or 812 Competizione A with a targa roof. As with other models from the Italian brand, the ‘A’ stands for ‘Aperta’, i.e. ‘open’. Both vehicles are strictly limited and will primarily be offered to VIP customers of Ferrari. At most, new buyers might be lucky enough to get hold of a remaining example from a dealer towards the end of the production period. Otherwise, the only option is the resale market, which Ferrari doesn’t really like.

As already announced, both versions are powered by the familiar 6.5-liter naturally aspirated V12 engine. New materials and components increase the maximum revs to 9,500 rpm and power to 610 kW/830 hp. Ferrari quotes 692 Nm of torque. New components include titanium connecting rods, a rebalanced crankshaft, and piston pins, cams and cam followers with a diamond-like carbon (DLC) coating. In addition, the intake system was modified with shorter paths and a variable intake port system. Power is sent to the rear axle via a seven-speed dual-clutch transmission. Acceleration from a standstill to 62 mph takes 2.85 seconds, to 124 mph 7.5 seconds. The end of propulsion is only reached beyond 211 mph. Ferrari enters completely new territory with the all-wheel steering, which allows the rear wheels to be controlled electrically, individually and particularly quickly. 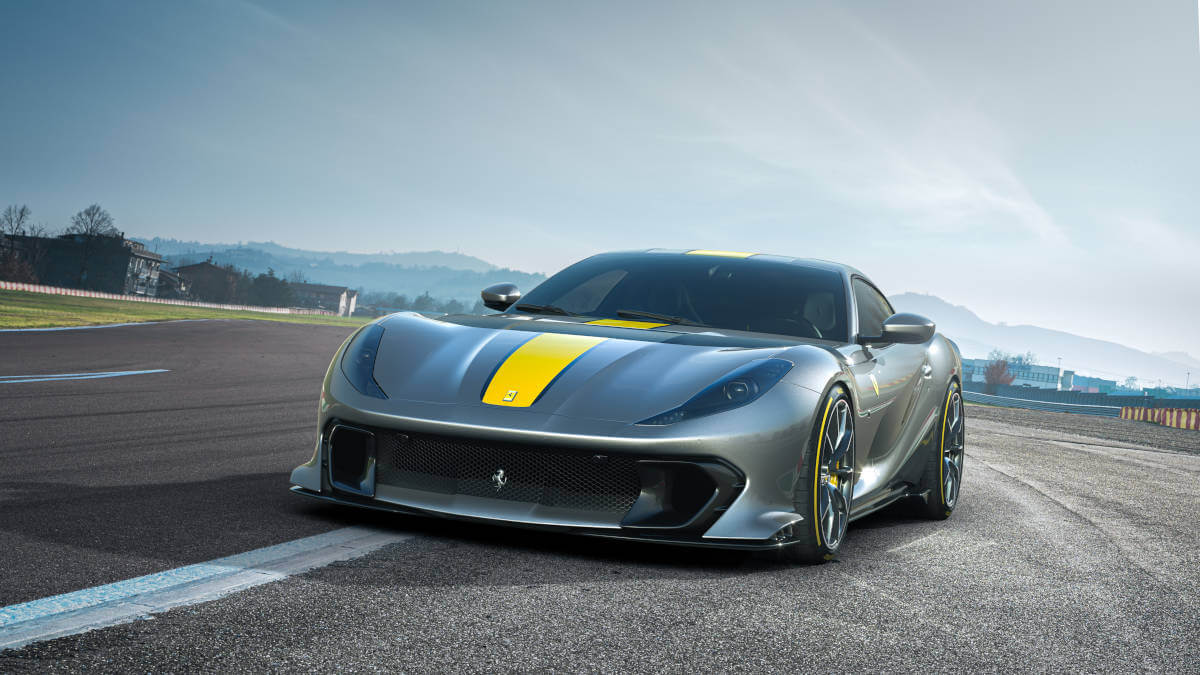 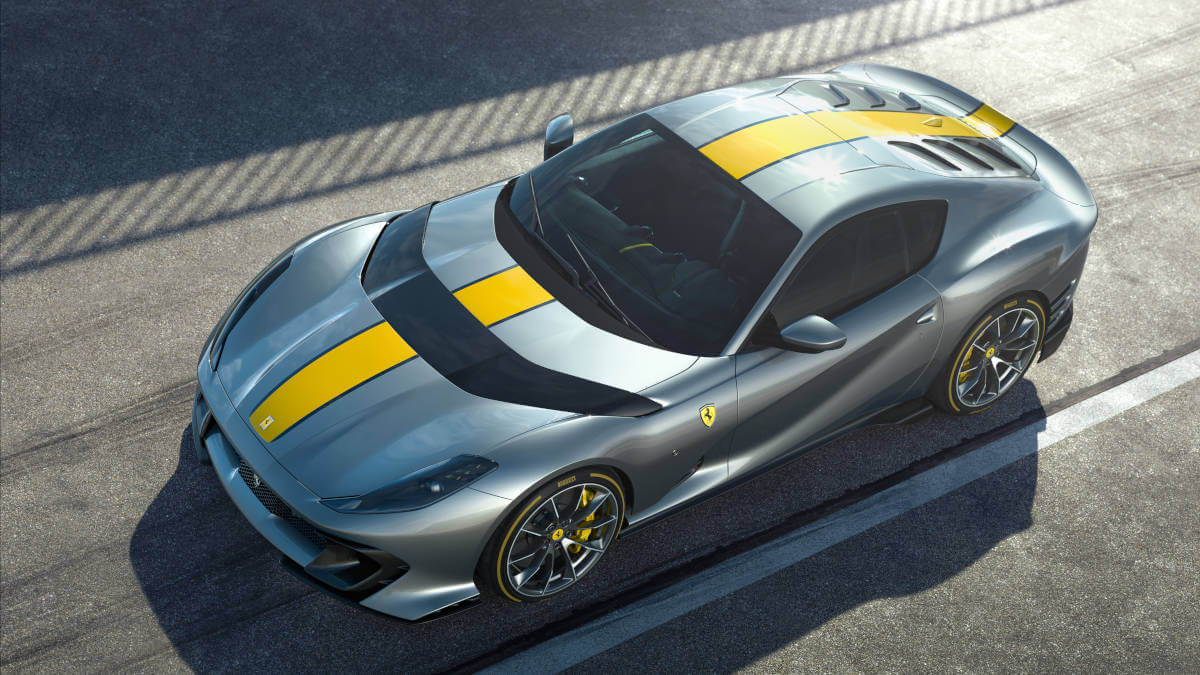 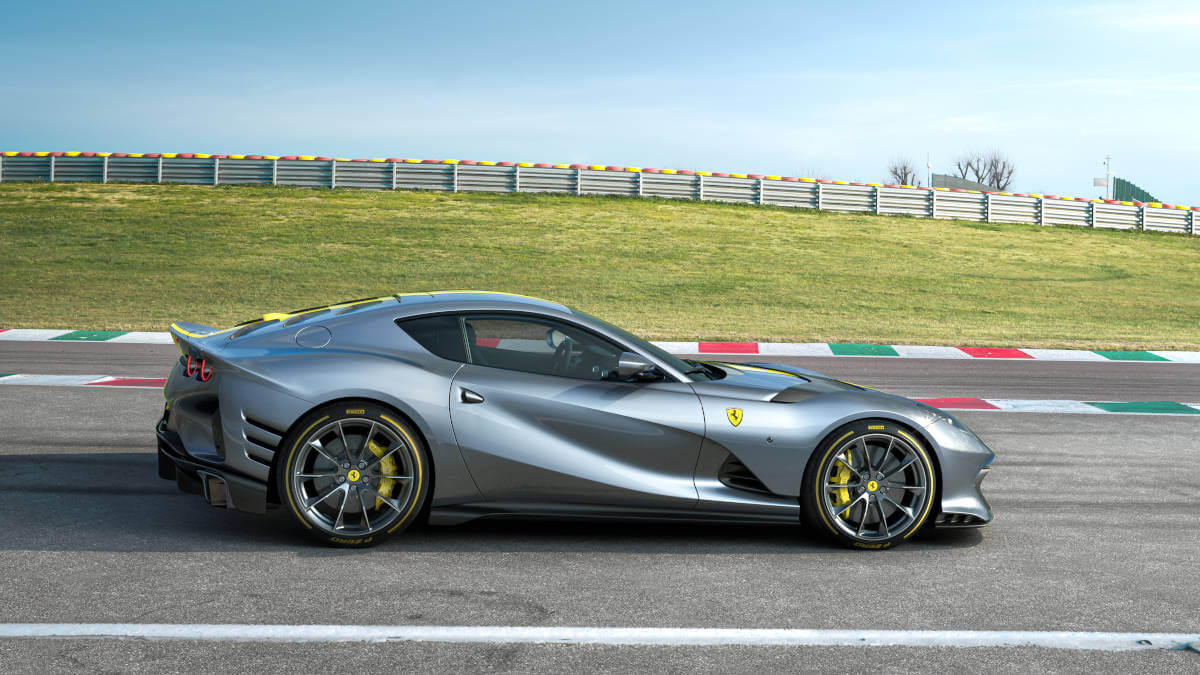 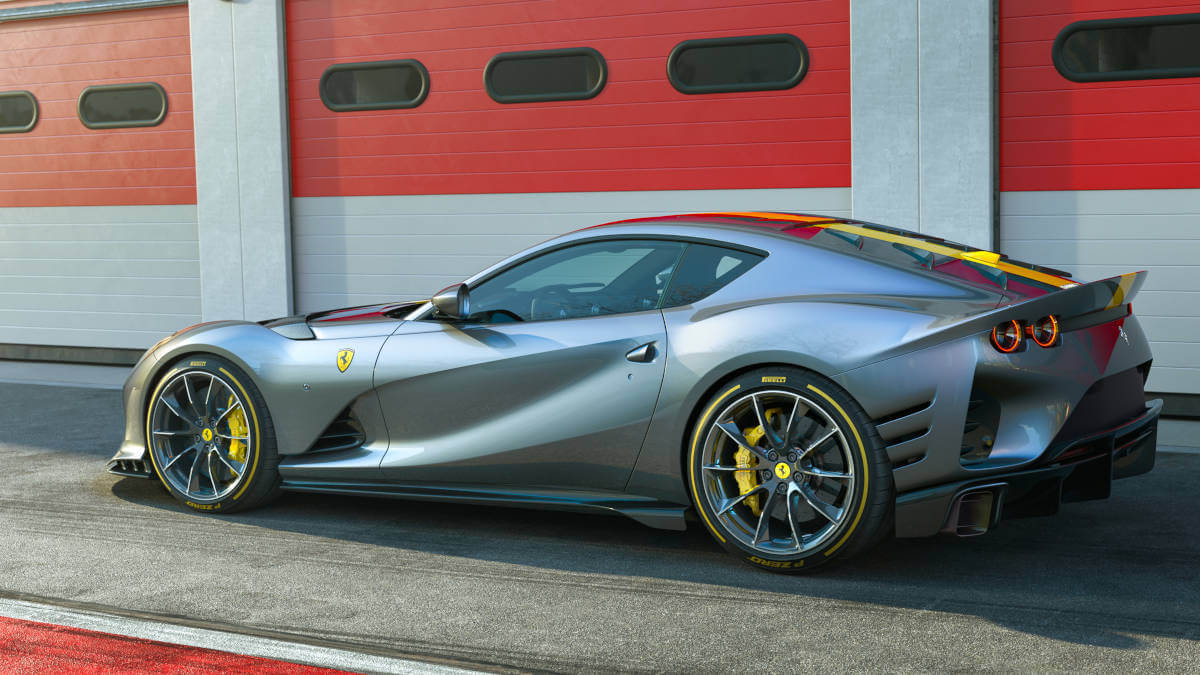 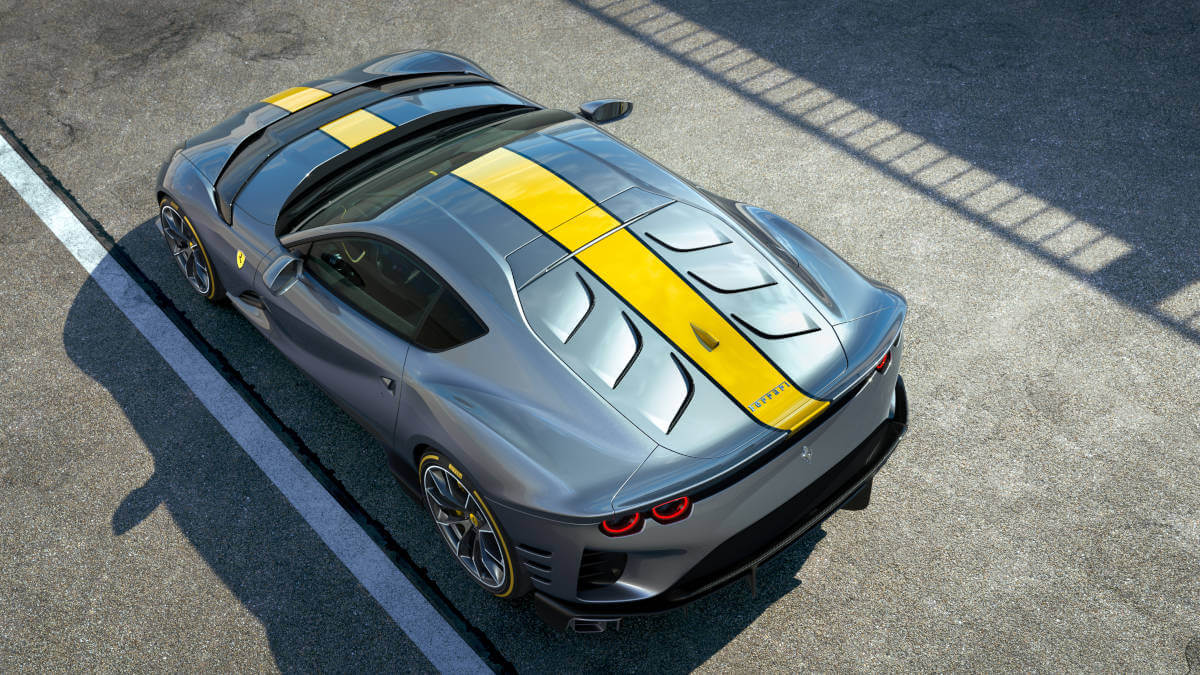 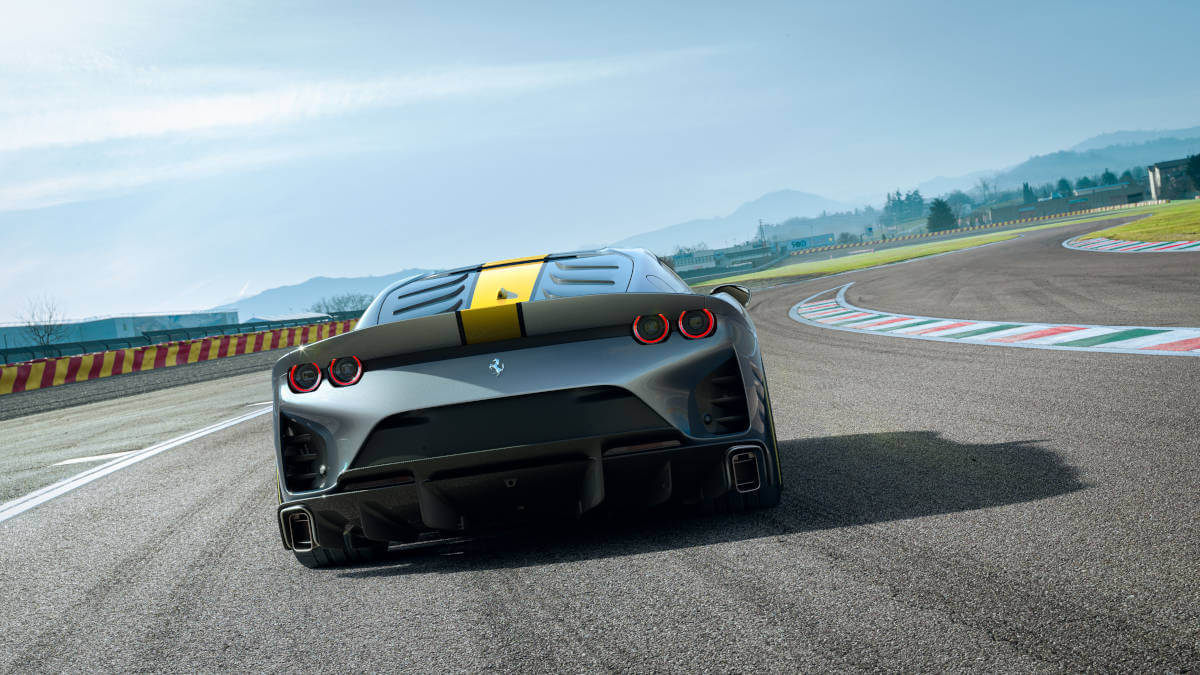 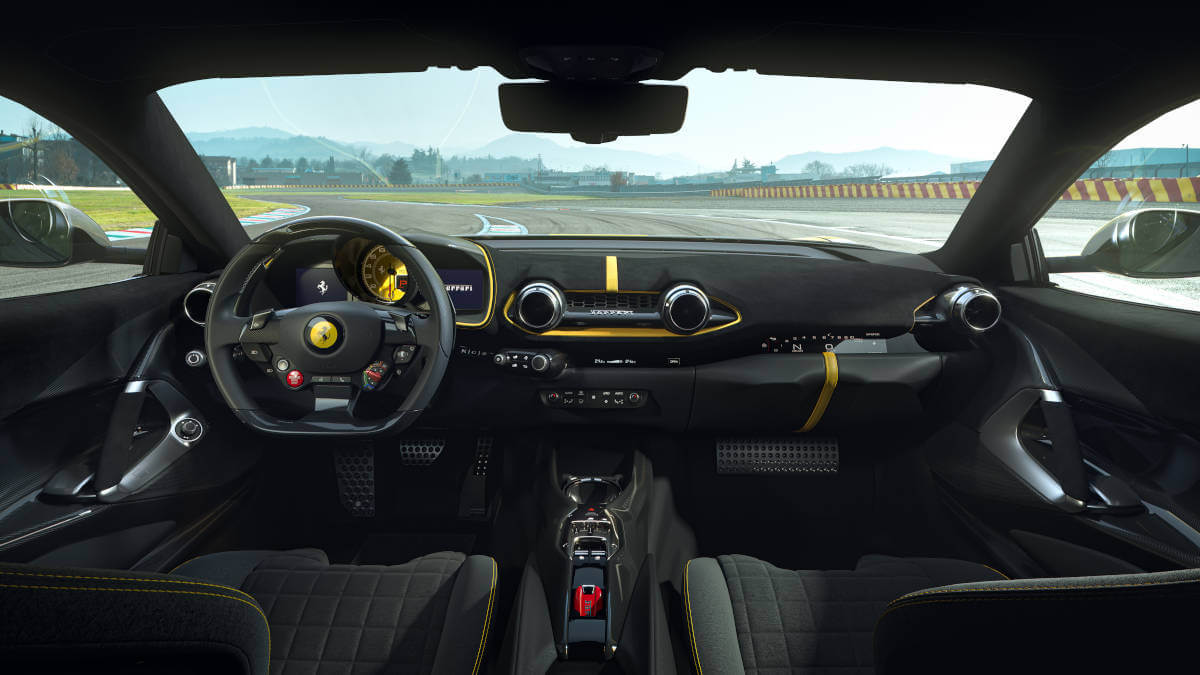 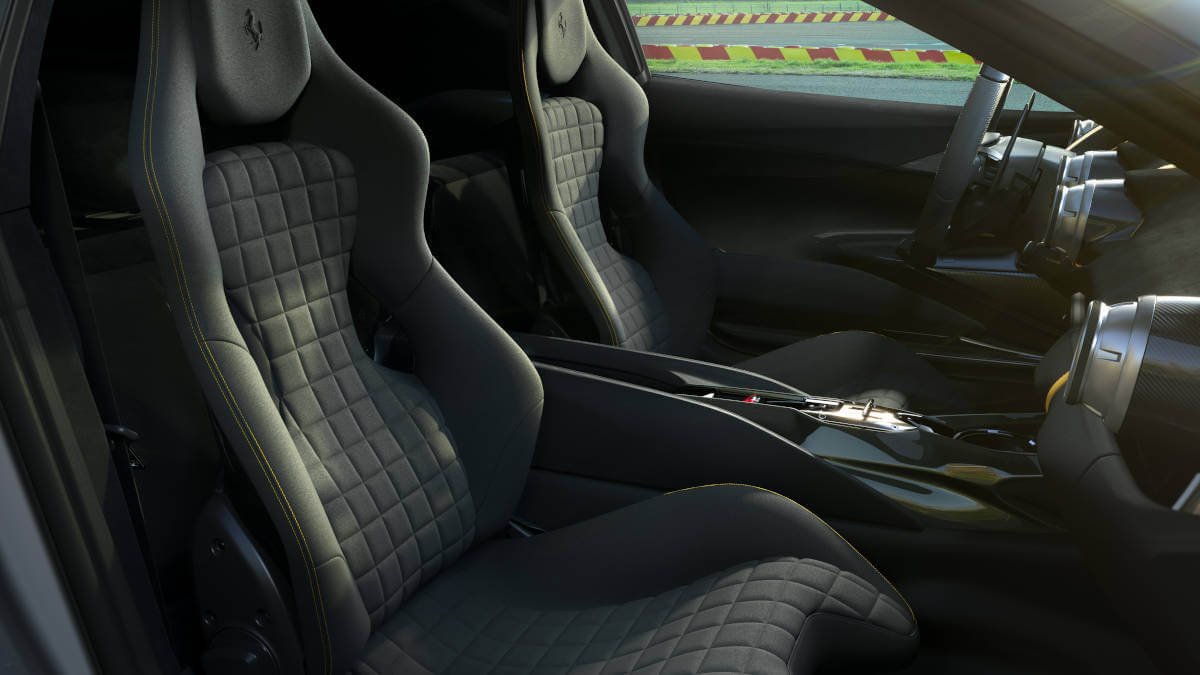 Compared to the 812 Superfast, the increase in engine power and maximum revs resulted in an increased demand for cooling air. Likewise, more heat must be dissipated from the engine bay. To ensure this without negative affecting the airflow along the body, the 812 Competizione was given a lot of development time in the in-house wind tunnel. An exposed carbon lamella was integrated on the hood, with air outlet slots on each side. They direct the hot air past the outside of the cockpit. The brake cooling system has also been given detailed attention. Two almost square inlets are located in the front bumper for this purpose. It was possible to reduce the temperature of the brake fluid by around 30° C during heavy use. In front of the front wheels, part of the captured airstream exits again to form a curtain around the wheels and increase downforce.

A passive-mobile aero system is integrated in the front diffuser and opens at speeds of more than 155 mph. It closes off the diffuser area, smoothing the airflow and thus enabling the 812 Competizione to reach its topspeed. At the rear, the diffuser extends across the entire width of the vehicle. There is also a significantly higher rear spoiler above the four taillights. Completely new are the six vortex generators, which instead of a rear window provide for a change in the flow and thus redistribute the pressure pattern of the rear axle. They direct air towards the spoiler outer areas, generating more downforce here. Behind each of the rear wheels there are three air vents with integrated aerodynamically flaps which deflect the wheel arch pressure upwards and thus also generate downforce. Compared with the 812 Superfast, the Competizione is 38 kilograms lighter. 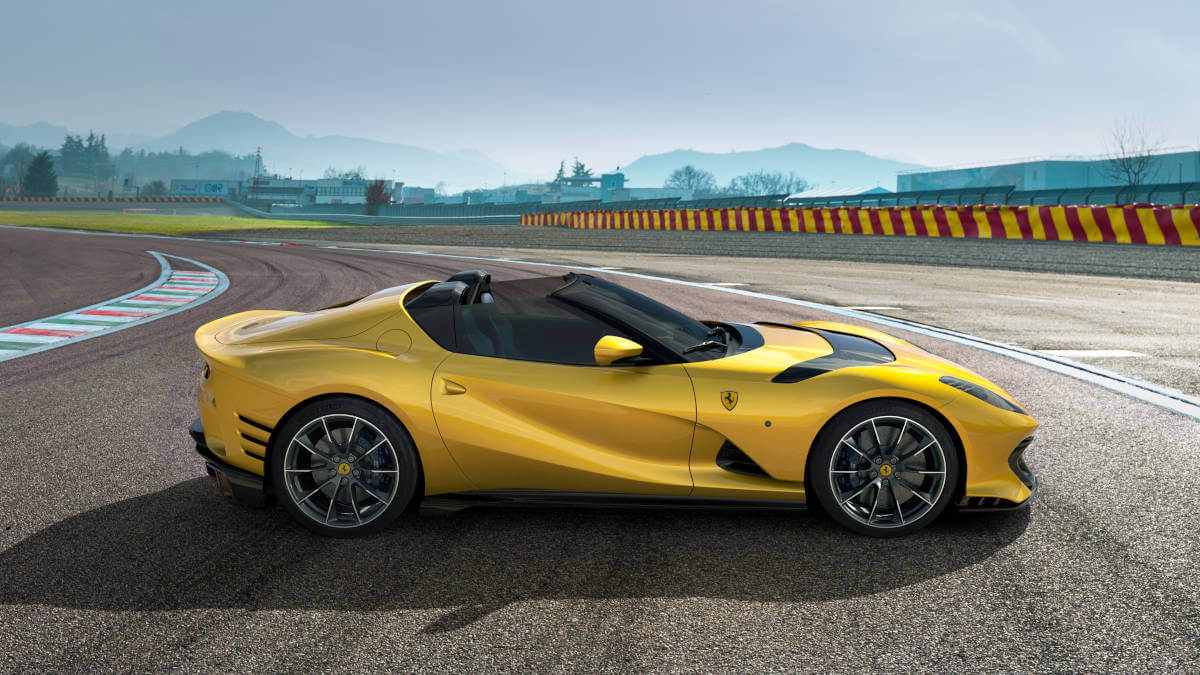 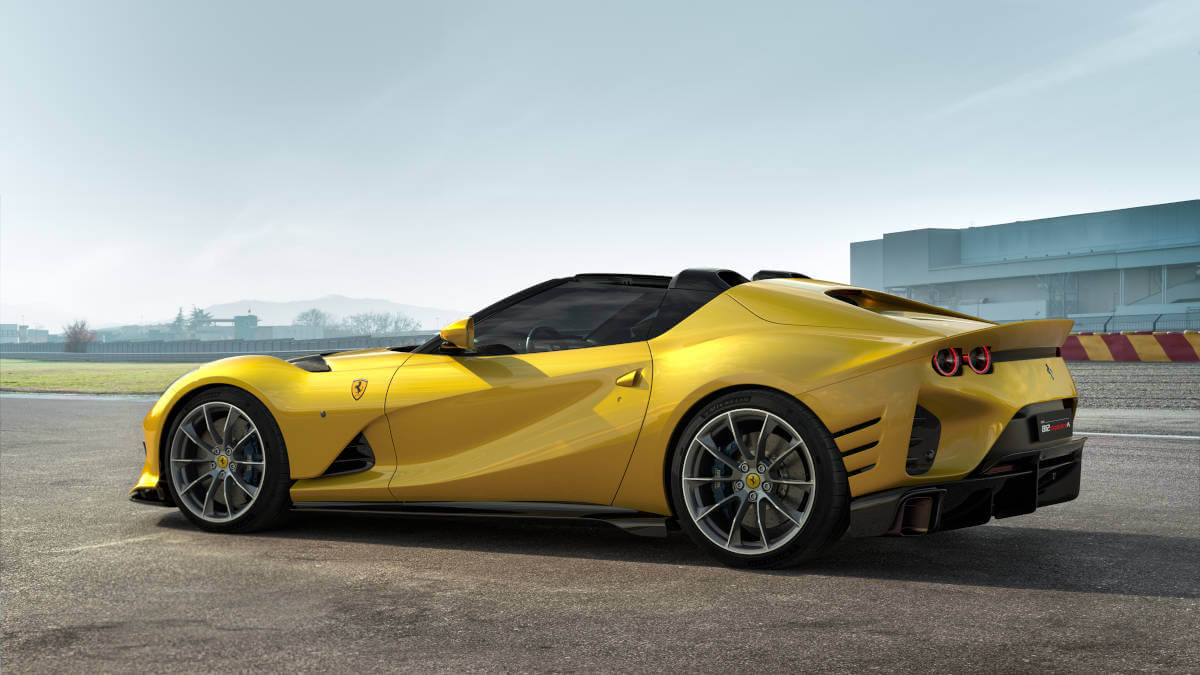 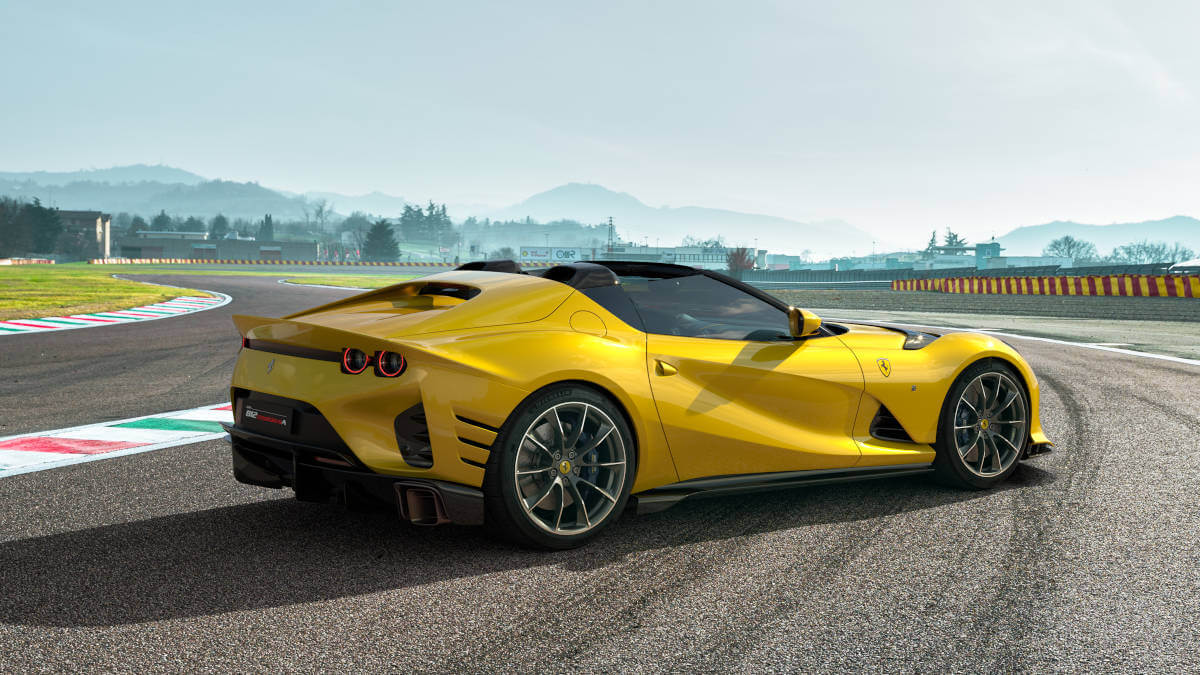 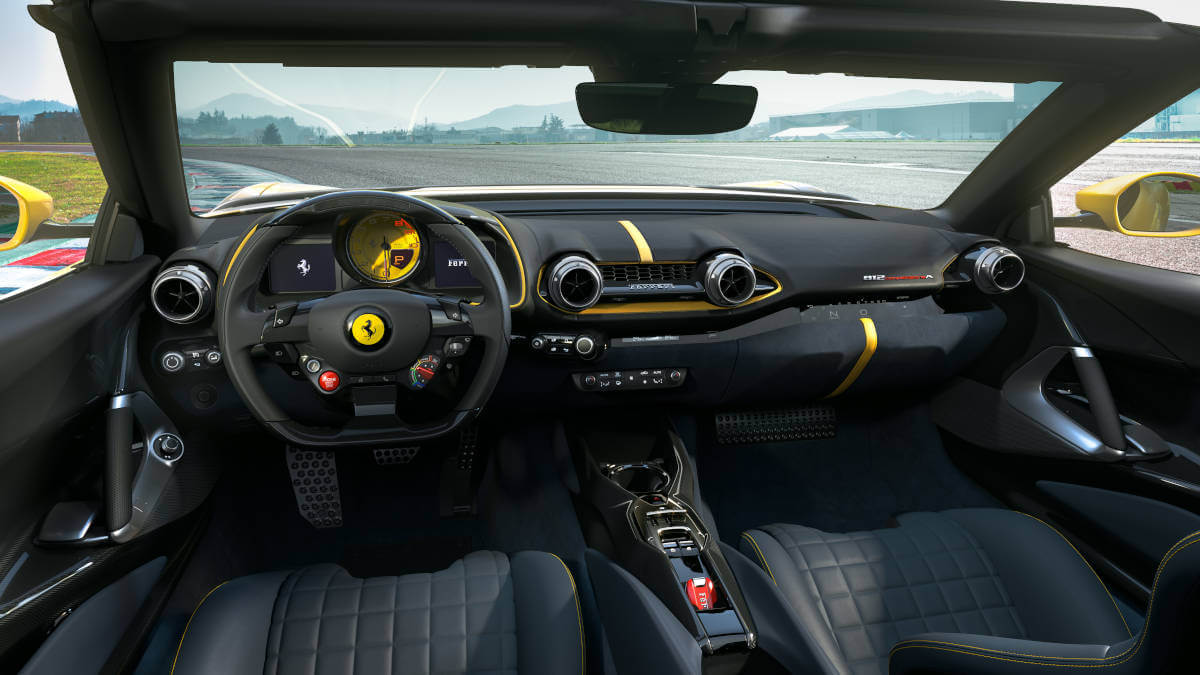 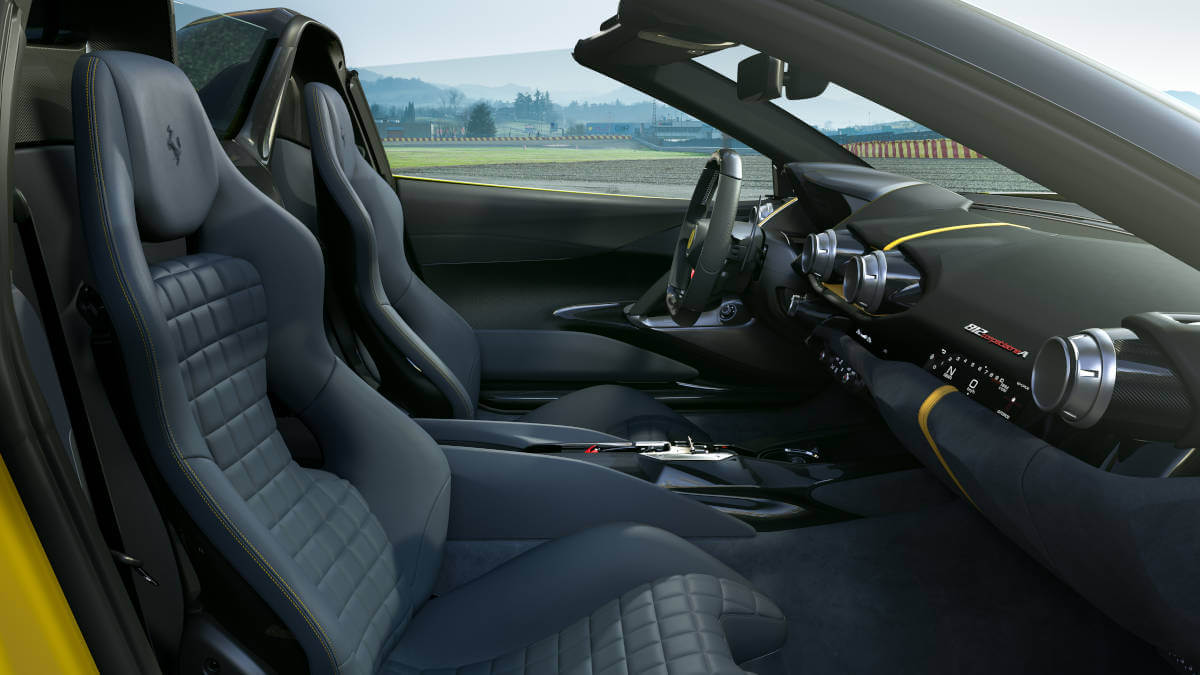 The open targa version has no vortex generators at the rear. Instead, a wide bridge element extends between the strut arches behind the two rollbars. This directs the airflow in the direction of the rear spoiler, which puts the downforce at a comparable level to that of the coupé. When the roof is open, a flap at the top of the windshield frame ensures little air turbulence in the cockpit. The targa roof is made of carbon fiber and can be carried along in a custom-fit compartment. While 999 examples of the 812 Competizione are to be built, only 499 of the open 812 Competizione A will be produced.

Interior with a tribute to the past

While inside the basic look of the 812 Superfast and 812 GTS has been retained, Ferrari took specific measures to reduce the weight of the door panels and center tunnel trim. The vehicle key can be stored between the seats while driving. In front of this is a tribute to the legendary open gearshift gate of earlier Ferrari models. Ferrari didn’t provide any details on the prices of the two limited edition special models.