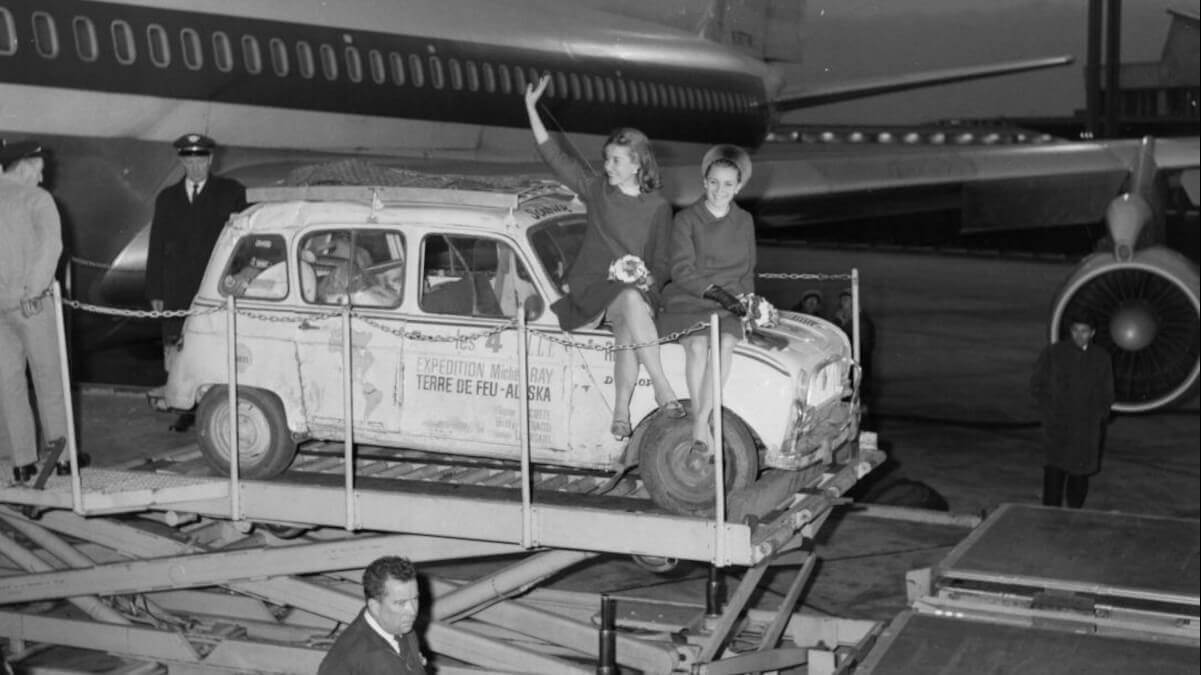 With the compact R4, Renault had a bestseller in its model range from 1961 onwards, the qualities of which were appreciated by many people. Even the editors of the fashion magazine ‘Elle’ judged it to be “the best car for Madame”. To find out the true qualities of this small car, the then 26-year-old model Michèle Ray (later successful as a journalist and film producer) called for an expedition from Tierra del Fuego on the south coast of South America to Alaska in 1965. In addition to this approximately 40,000 kilometer (24,850 miles) route and the choice of vehicle, there was another special feature: next to Michèle, three other women but no men started on this tour. Élaine Lucotte, Betty Gérard and Martine Libersart embarked on this adventure and arrived at the starting point in Ushuaia, Argentina, in June 1965 together with two fully loaded Renault 4s. As this is the middle of winter in the southern hemisphere, there were about 30 centimeters of fresh snow on the roads when the two cars set off on 11 June.

In contrast to today, many connections of the previously worked out route were then only possible via unpaved and often muddy paths. Therefore the two ladies’ teams had to ‘seesaw’ their R4s out of deep driving grooves and potholes again and again. “The Renault 4 is a car for women for more than one reason. Easy to drive, but above all easy to lift,” Michèle Ray later said. In addition, the four ladies also benefitted from a three-week technical course at the Renault factory before starting their journey, when they needed to change tyres or solve a technical problem. From Argentina, the ‘Expedition Michèle Ray’ drove via Paraguay, Brazil, Bolivia, Peru and Ecuador to Colombia, then via Panama, Costa Rica, Nicaragua, Honduras and Guatemala to Mexico. From there the long stages through the USA and Canada remained, before the actual destination in Alaska was reached and afterwards the cars were driven to the port in New York. 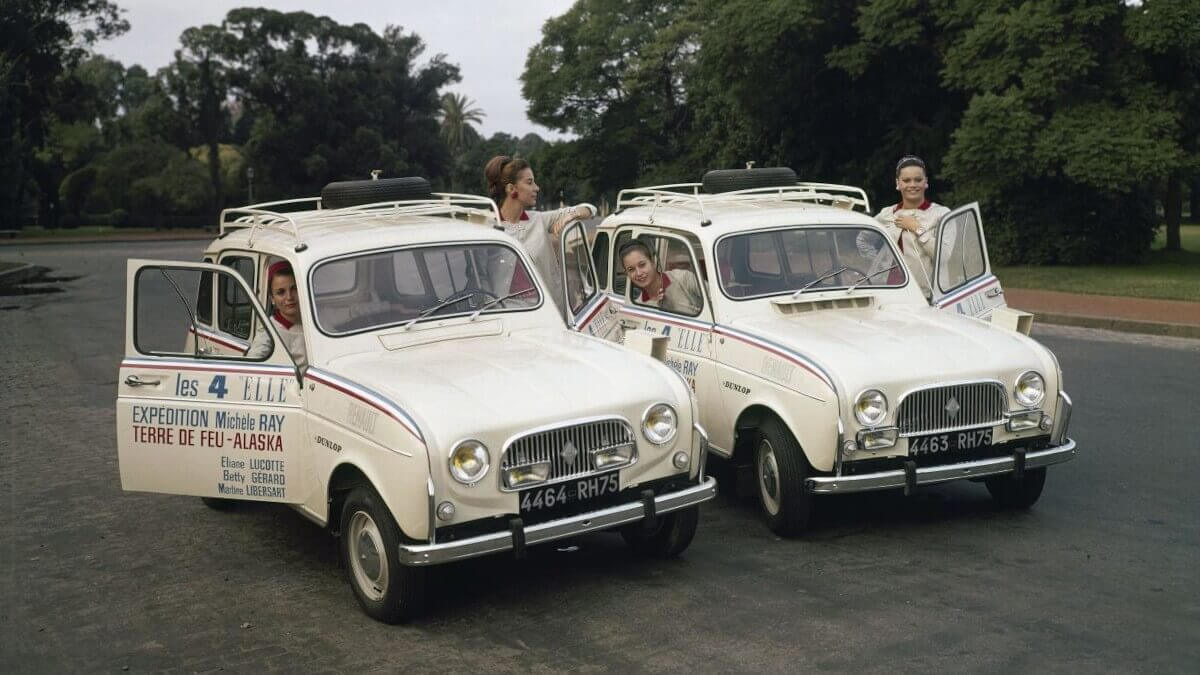 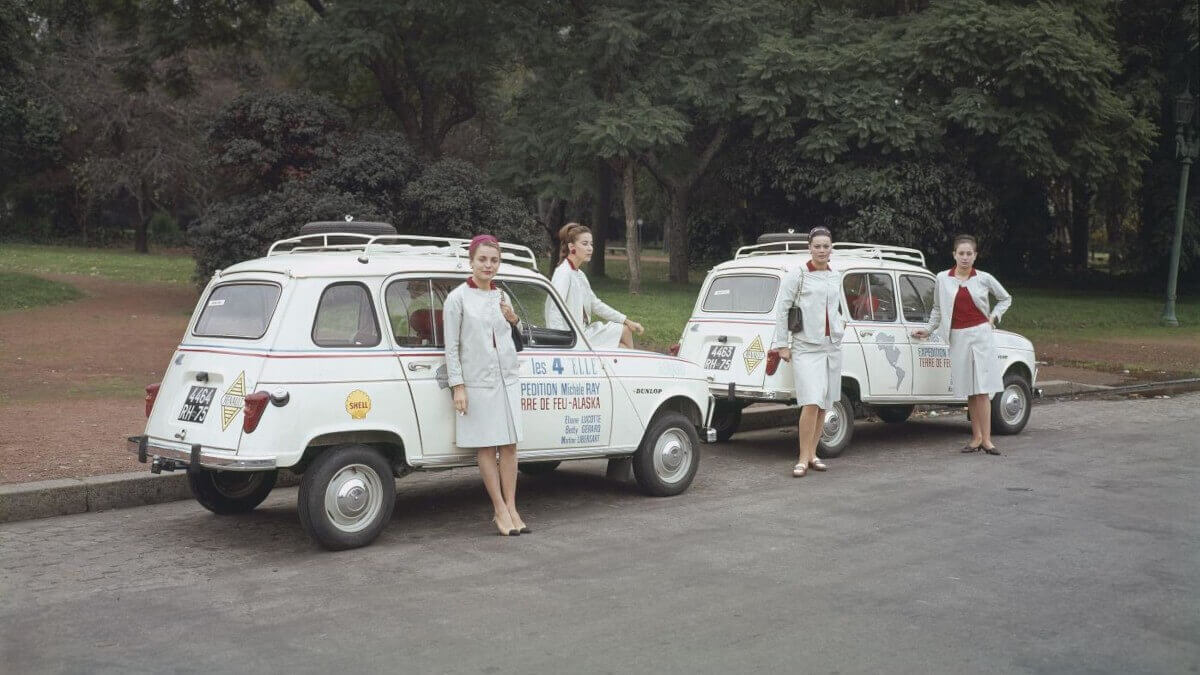 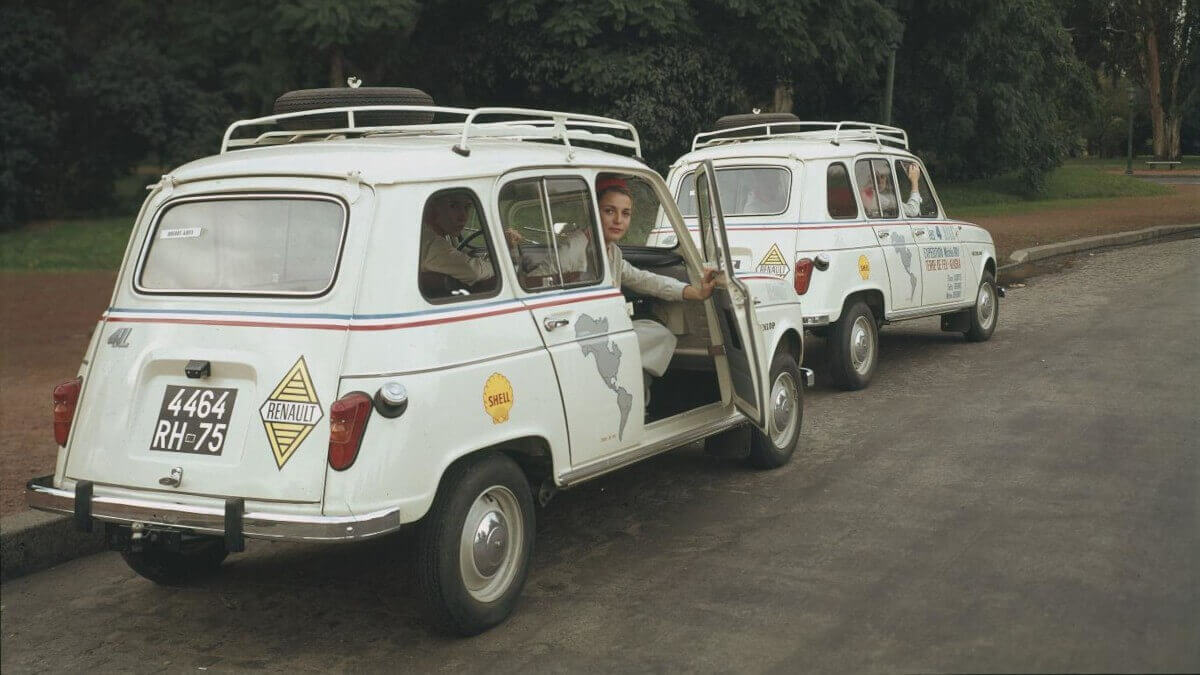 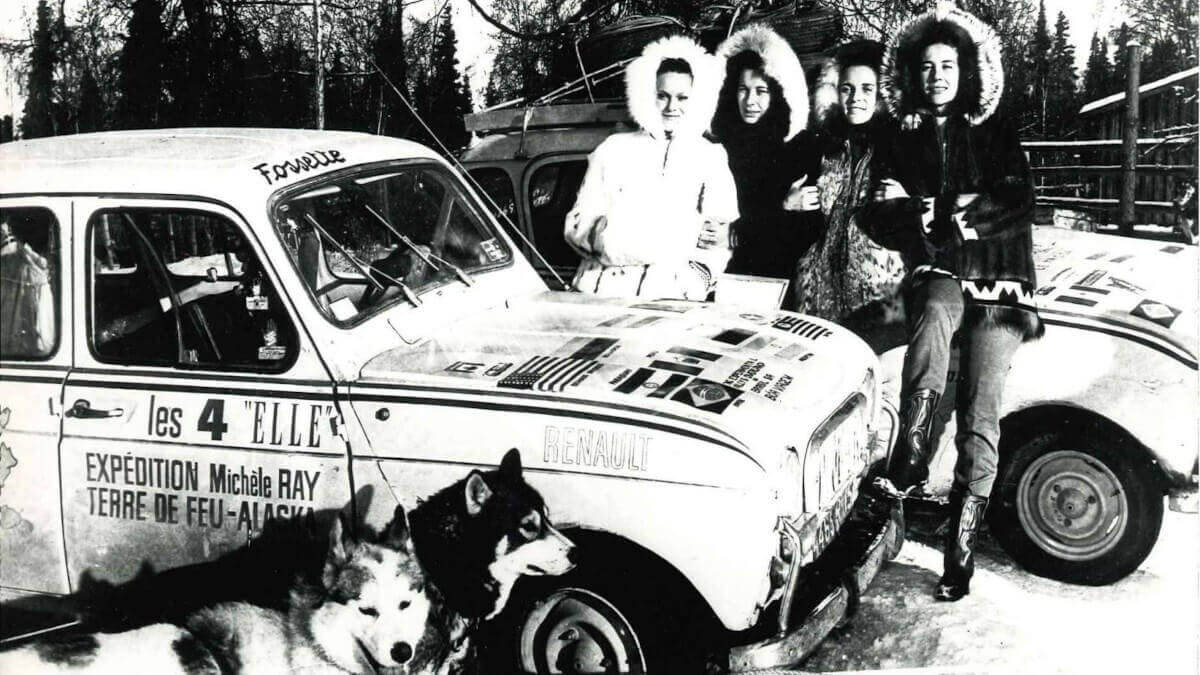 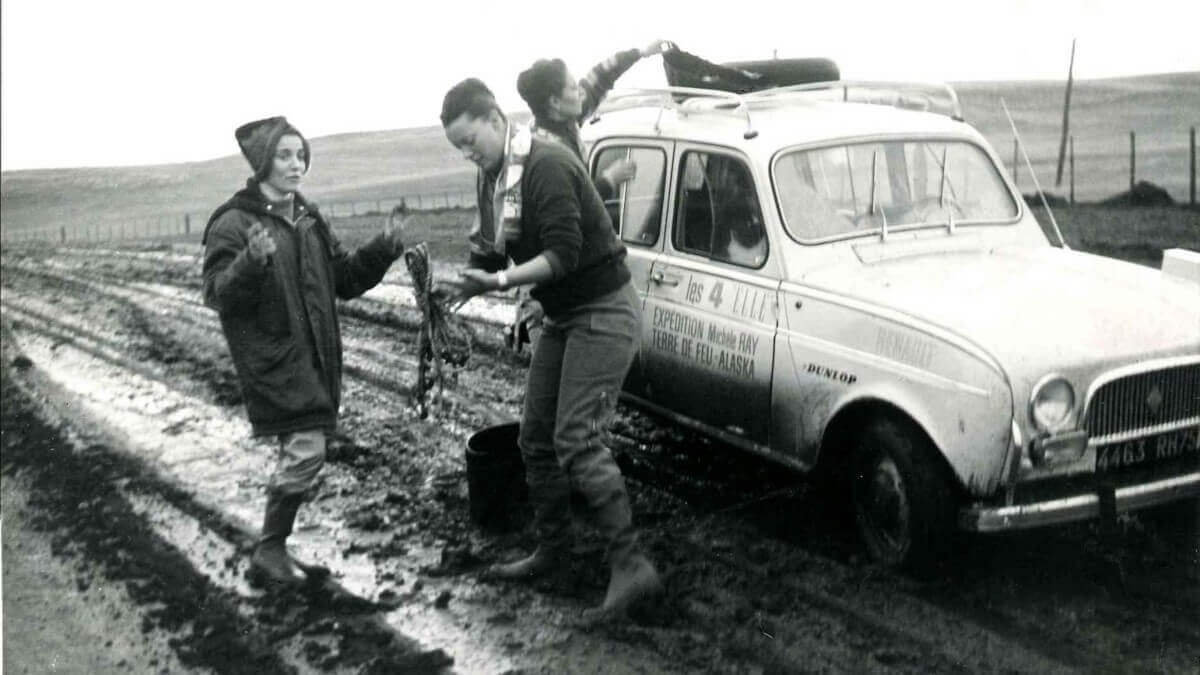 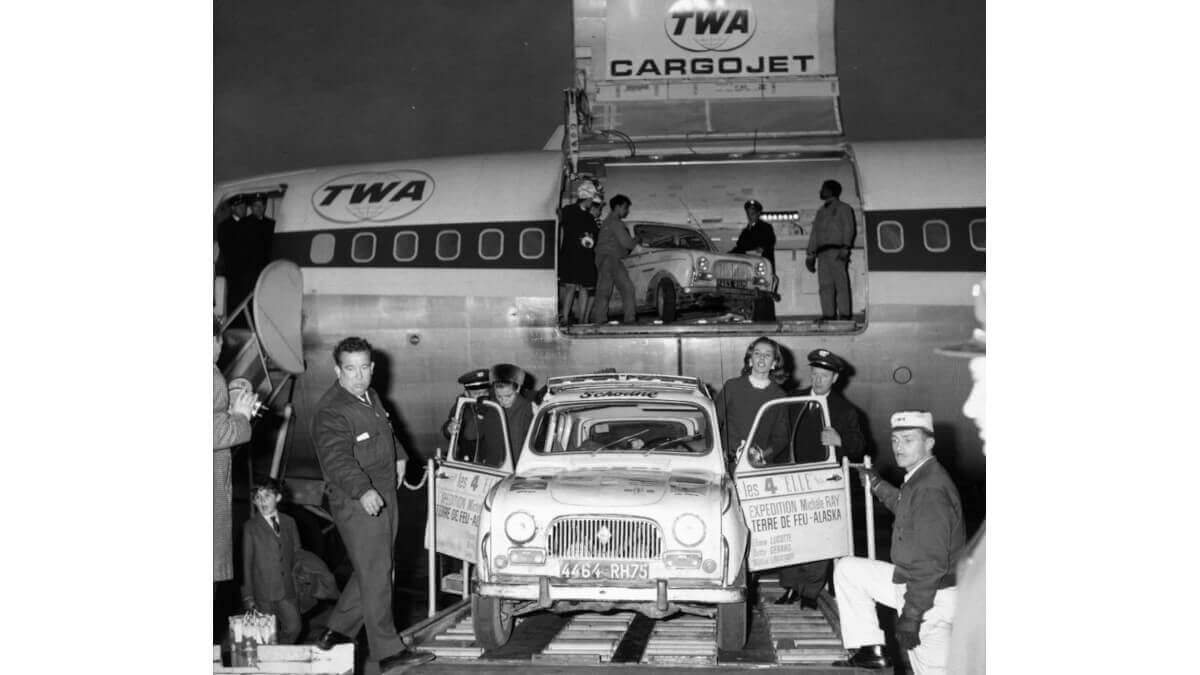 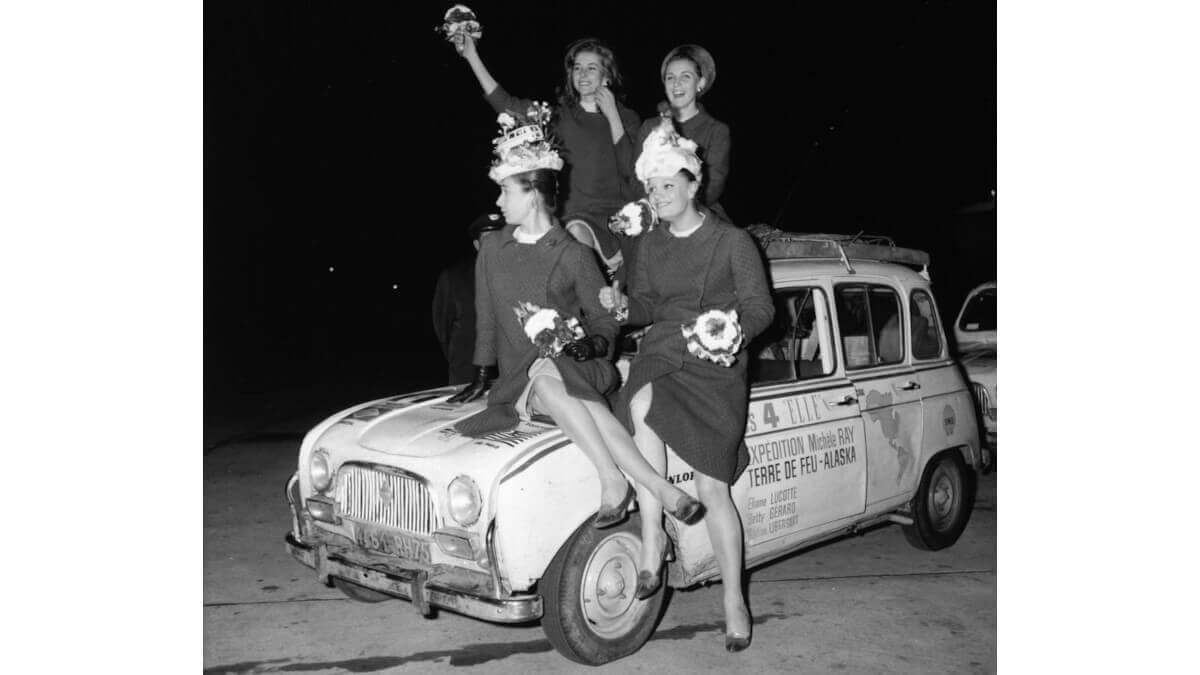 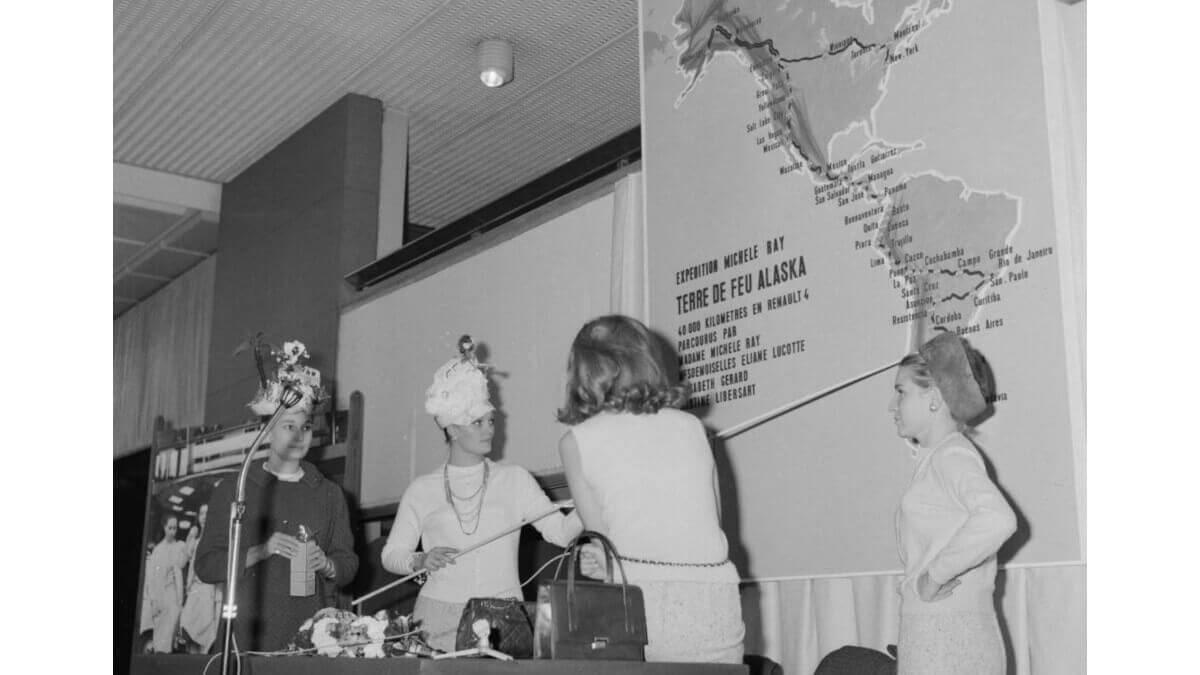 Although the Renault 4 offers plenty of space for luggage, the four ladies were left with only one suitcase, which they had to share for their clothes. The remaining space in the cars was filled with spare parts, tools, petrol cans and film material. After having spent hours dealing with the border officials at the border between Paraguay and Brazil, the teams supplemented their equipment with carbines, ammunition and machetes before crossing the state of Mato Grosso. In front of some particularly large mud holes the cars had to be completely unloaded to have better chances of crossing. But as soon as all objects were loaded again afterwards, the car threatened to get stuck again. To save weight, the ladies’ teams had strictly rationed their food. On the way, oranges and milk that they got from locals provided variety in the menu.

Back in 1965 the ladies had to do without the convenient and modern use of a GPS navigation device – simply because it hadn’t been invented. Instead, they used a compass and rare road signs as a guide to reach San Ignacio in Bolivia after about 1,300 kilometers (807 miles) of ‘blind flight’. Afterwards they went into the cordilleras up to Chacaltaya at an altitude of 5,200 meters and on to Peru and Ecuador. The two teams lost sight of each other and met again only 400 kilometers (248 miles) later. Due to the rainy season, which washed away some bridges, the crossing of Central America was severely hampered. The well-build roads on the west coast of North America then ensured that a good 1,000 kilometers (621 miles) could be covered every day. But about 1,500 kilometers (932 miles) before the finish line in Anchorage, a stone smashed the windscreen of Michèle Ray’s R4. At temperatures around -18°C, she had to grit her teeth, wrap herself in a sleeping bag and drive on. After about 60 kilometers (38 miles), she took breaks to warm up again. Nevertheless, both vehicles reached the finish line and finally, with the windscreen repaired, also New York. The long-term qualities of the small Renault 4 were undoubtedly clear.