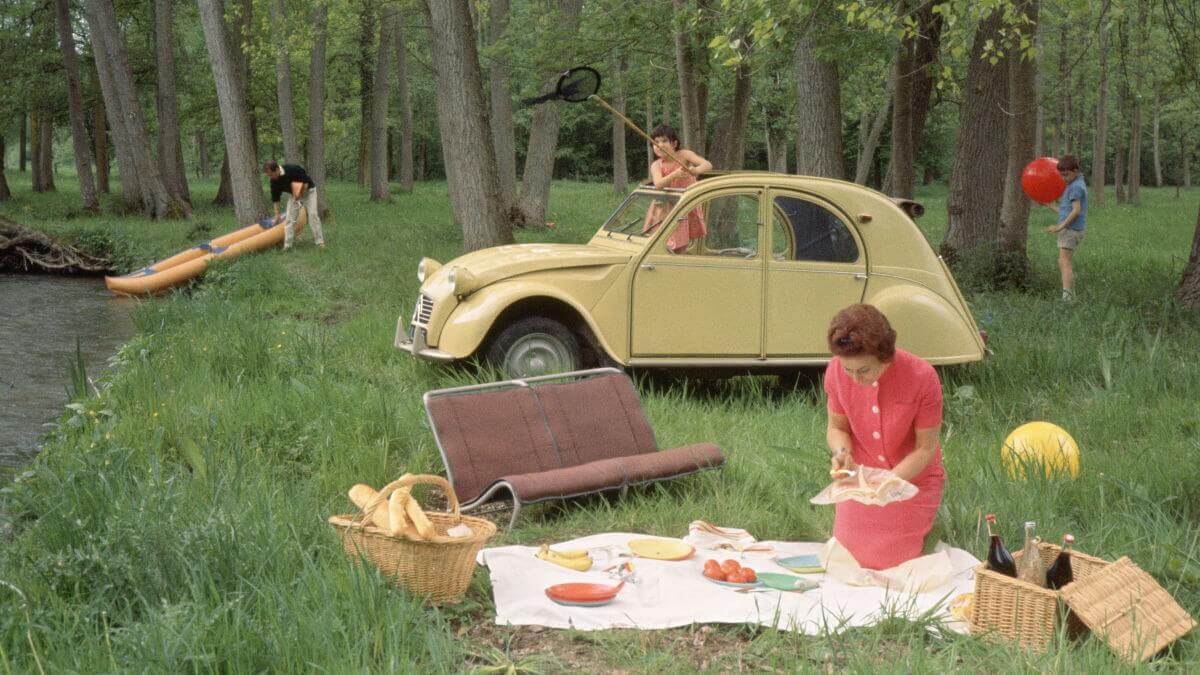 Last year we presented the Citroën 2CV here. The occasion was the 110th anniversary of the brand, through which the French had a look back on important models of their history every month. Frequent readers therefore know that the 2CV itself also celebrated a special anniversary in 2019, as it turned 80 years old. German speaking fans know the cuddly car much better under its pet name than under the official model abbreviation. It is simply called ‘Ente’ (duck). And the small car really is supposed to be 81 years old now? Yes, because the first 250 prototypes were built under the internal code TPV (Toute Petite Voiture, very small car) as early as 1939. When the German Wehrmacht invaded France, some of them were hidden on remote farms, while the majority of the prototype fleet was destroyed to prevent the basic idea from falling into the hands of others. After the war, the existing plans were relaunched and the 2CV was presented as the world’s first small car with front-wheel drive at the Paris Motor Show on 7 October 1948.

The relatively pragmatic orientation to produce a car for farmers, with which they could drive to church on Sundays and to the market during the week, taking a full basket of eggs with them on any kind of road without one of them breaking, remained throughout the entire period of production. The resulting very comfortable chassis also provided for the extreme sloping positions in which the 2CV chased around corners. Even Roger Moore got to know the taker qualities of the 2CV, when in 1981, in his role as James Bond in the film ‘For Your Eyes Only’, he escaped from his opponents through Greek olive groves together with Bond girl Melina Havelock (played by Carole Bouquet) in a yellow one. In many countries, students and alternative thinkers enjoyed the 2CV and ensured that between 1948 and 1990 more than 5.1 million copies (including the commercial vehicle versions) were produced in various plants worldwide. In the first years of production, however, there was still a great shortage of raw materials in France, which meant that the waiting list for a new 2CV was at times six years. Numerous improvements went into production almost unnoticed, while the visual appearance was only changed twice: from 1960 onwards, all variants gradually received a new bonnet together with a new radiator grille, and from 1966 there was an additional window in the C-pillar to improve all-round visibility. In 1963 the front doors, which had previously been hinged to the B-pillar together with the rear doors, were reversed. 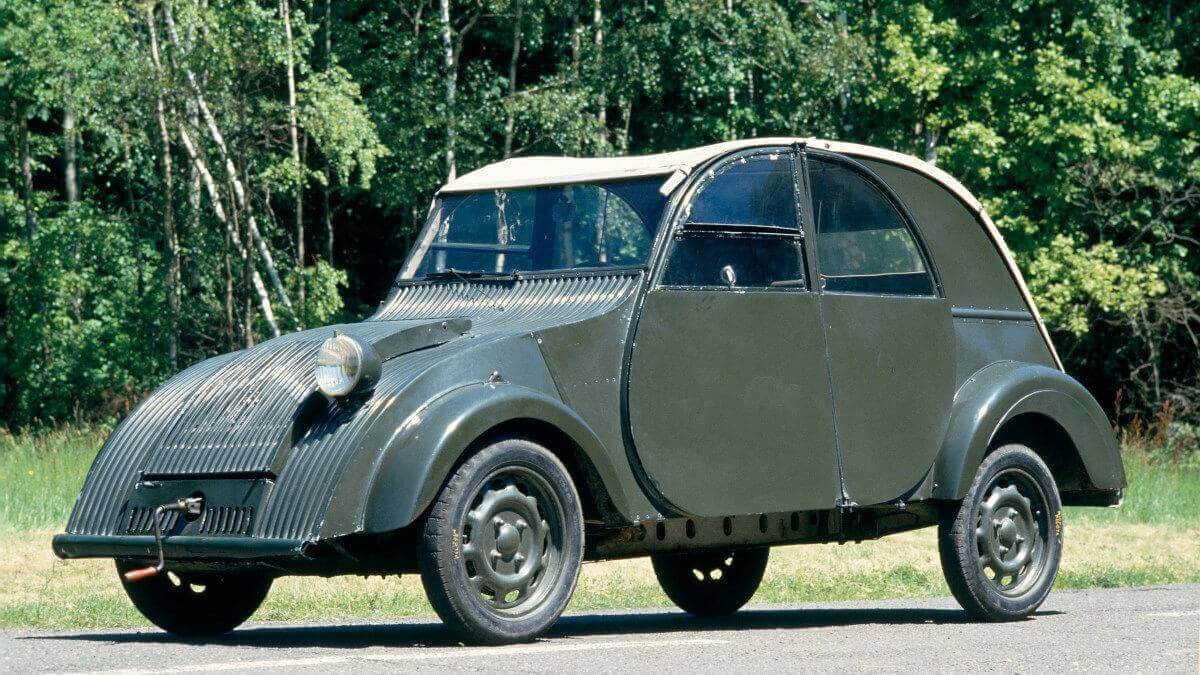 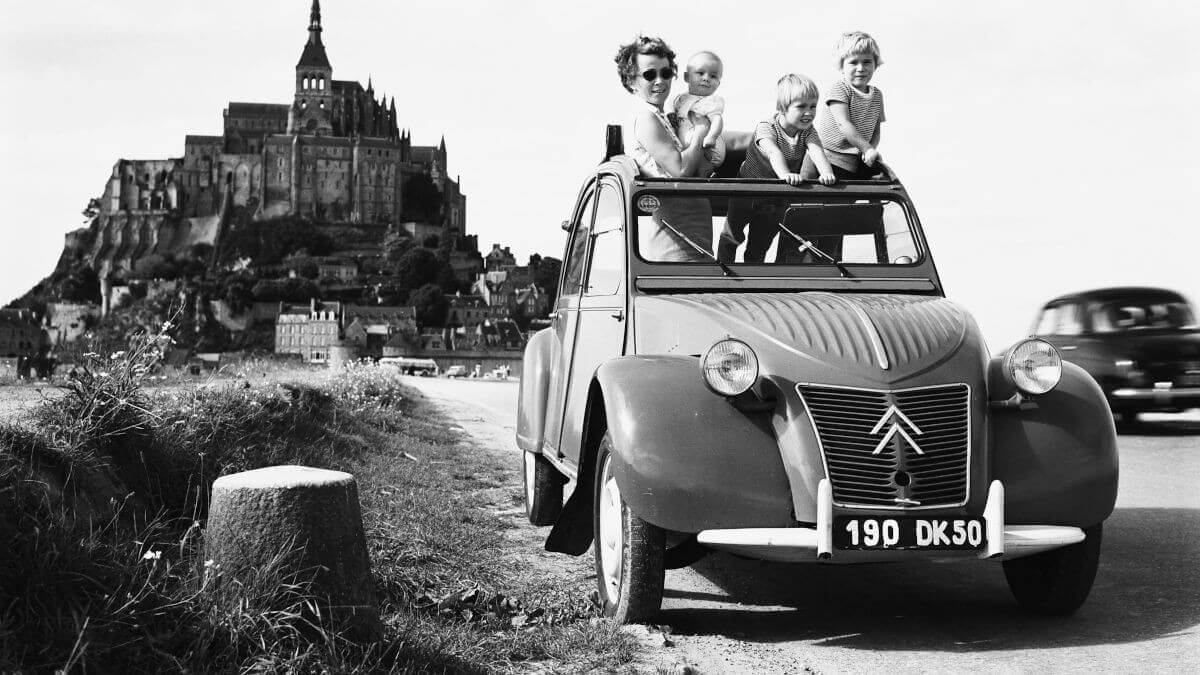 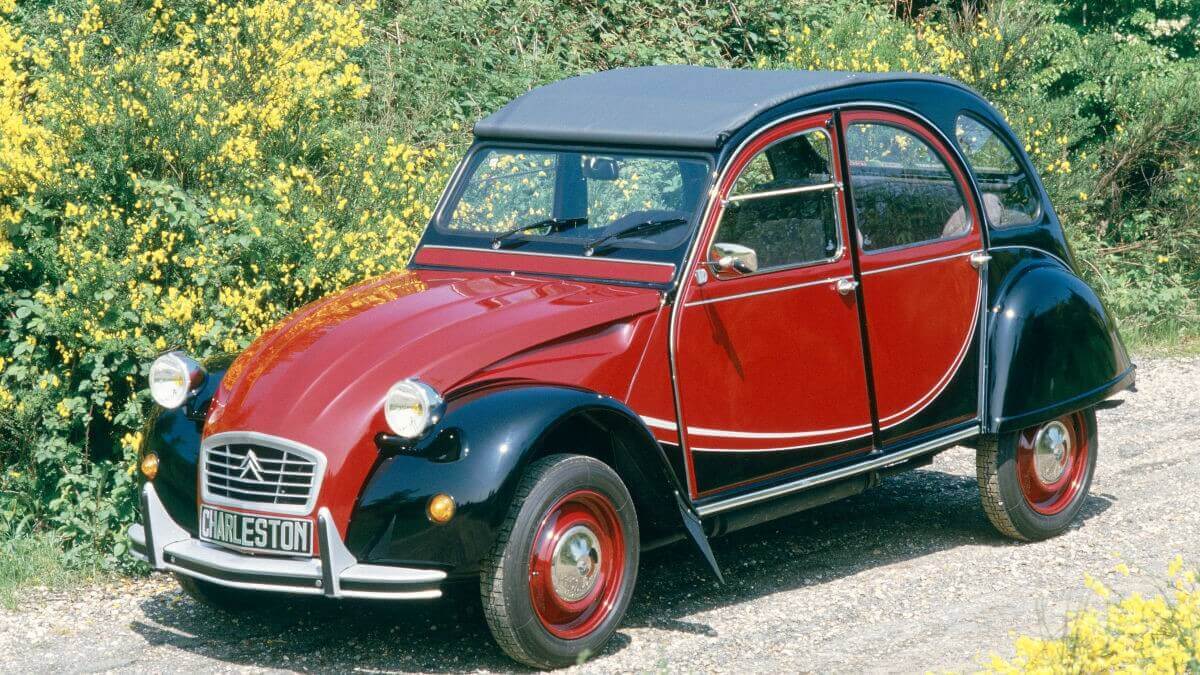 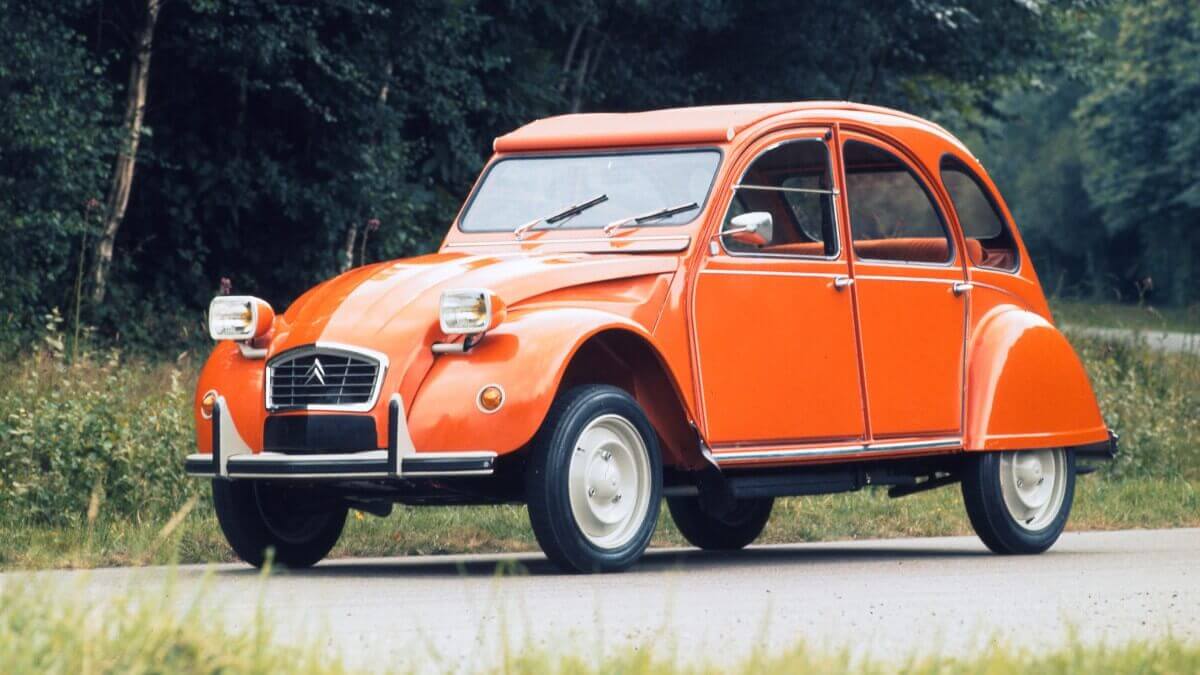 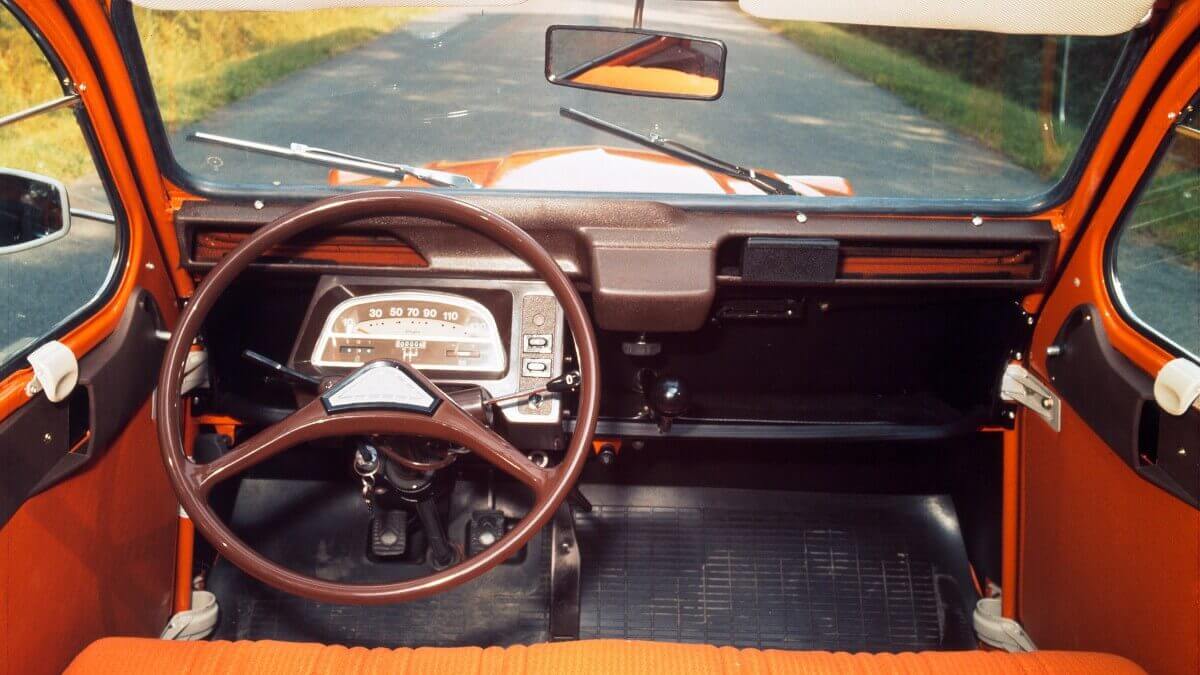 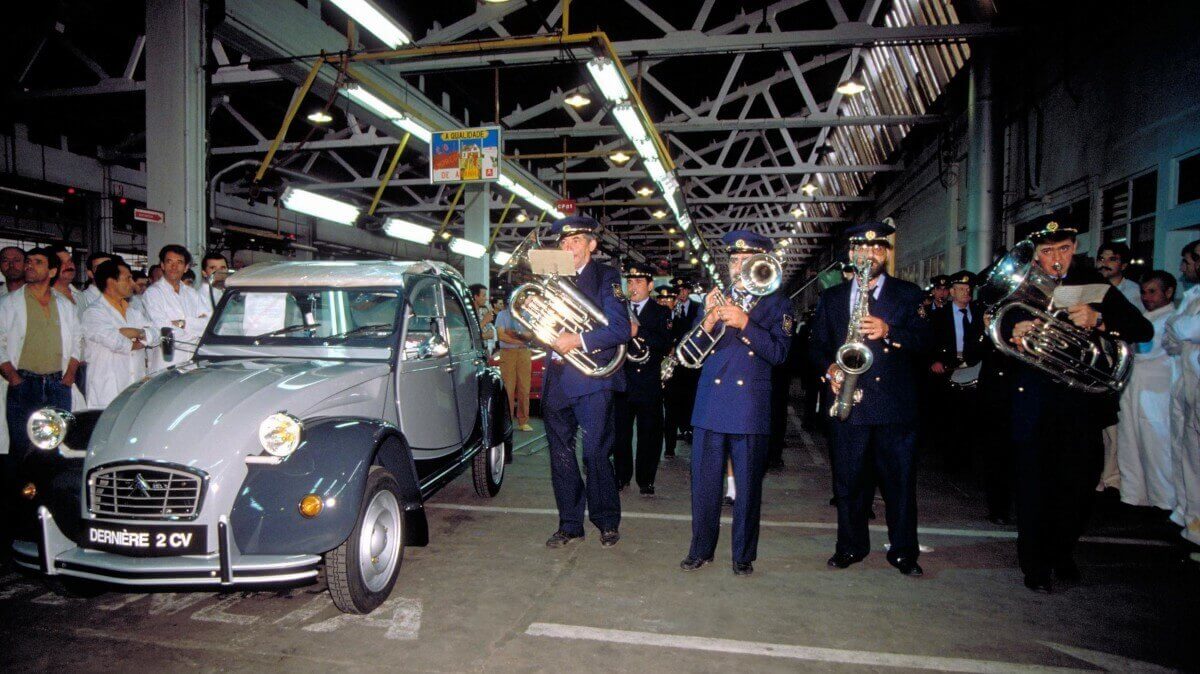 Despite excellent sales figures, Citroën decided to withdraw this model from the range after 41 years of almost unchanged production. The reasons for this were the stricter exhaust regulations and the emerging safety regulations for new cars, which could no longer be met by the 2CV design. Thus on 27 July 1990 the last ever 2CV left the production plant in Mangualde, Portugal. With a small brass band the employees bid farewell to the car, which belonged to the Charleston special edition. During the 41 years there had been several special editions all over the world. Today, all well-preserved 2CVs are among the most popular classic cars in Germany and France. Especially rare is the Sahara version with a second engine on the rear axle and a four-wheel drive resulting from this. With all 2CVs, from the early versions with only 9 hp up to the last built one with 29 hp, the engines could be started in the traditional way by crank from the outside when the starter motor failed.