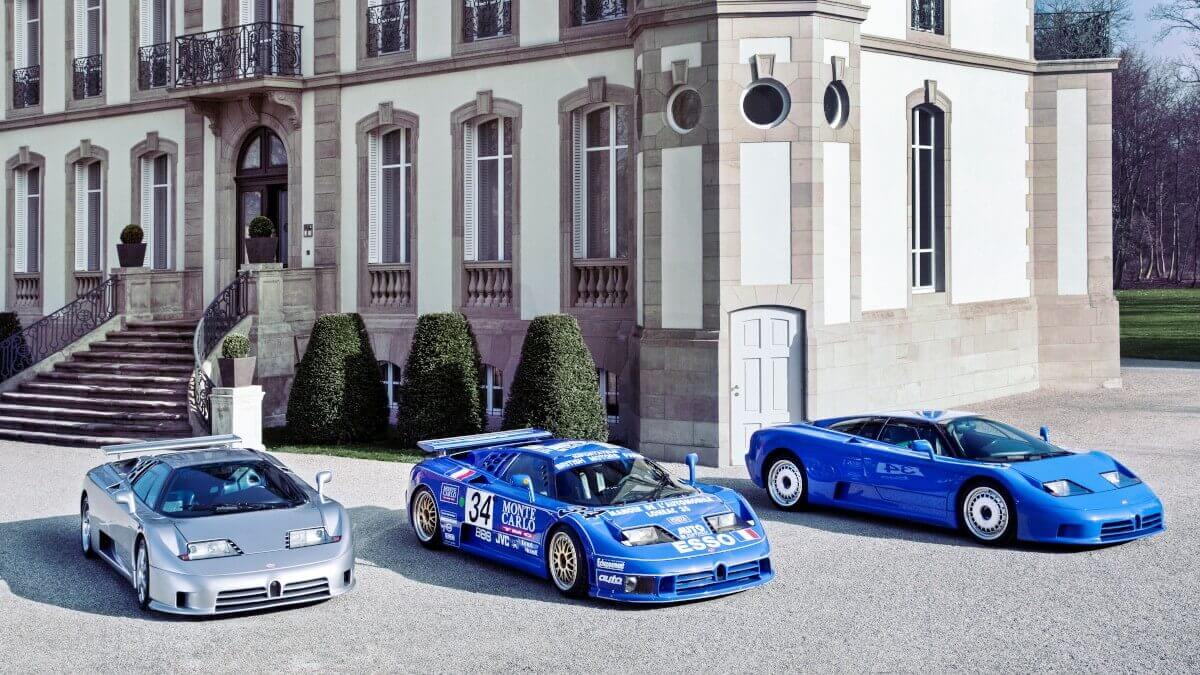 The first chapter of Bugatti’s brand history ended a few years after World War 2. From 1947, after the death of company founder Ettore Bugatti, his brother Rembrandt Bugatti continued to run the brand. A new beginning was attempted with the Type 101, based on the chassis of the Type 57 but with new body shapes. Although these were extravagant, they couldn’t match the elegance of Jean Bugatti’s pre-war vehicles. Thus they couldn’t find too many customers. Also the newly developed racing cars Type 251 and Type 252 remained far behind their expectations. In 1956 the last car ran off the line in the old manufactory in Molsheim, where until 1963 still conversions and repairs of pre-war models were carried out. Afterwards the company was merged with the French remnants of Hispano Suiza and the business field was shifted away from automobile manufacturing.

It took about 30 years before the brand name reappeared in the automotive headlines and the second chapter of Bugatti began. In Italy, businessman Romano Artioli dreamed of a perfect sports car with certain attributes. However, he couldn’t find such a car among the models offered by the established manufacturers. As he had been collecting cars for decades and had mainly collected classic Bugatti cars, at some point the idea of reviving the Bugatti brand was no longer out of his mind. In fact, he, who actually earned his living in Northern Italy as a dealer for Ferrari and two Japanese brands, was able to acquire the rights to the name in 1987 and gather a dedicated team around him to found Bugatti Automobili S.p.A.. Instead of Alsace, he had a new factory built in Campogalliano near Modena in Italy. There he quickly found experienced employees, some of whom moved from the established brands like Ferrari, Lamborghini, Maserati or De Tomaso to Bugatti. As designer, they hired none other than Marcello Gandini. 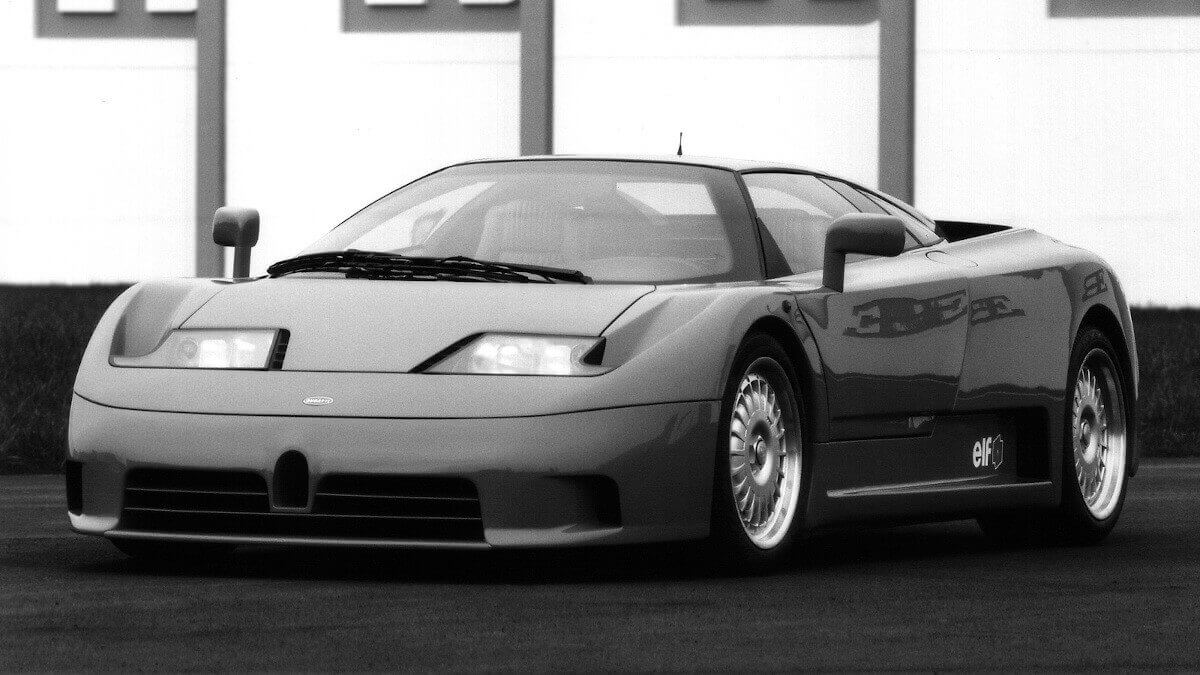 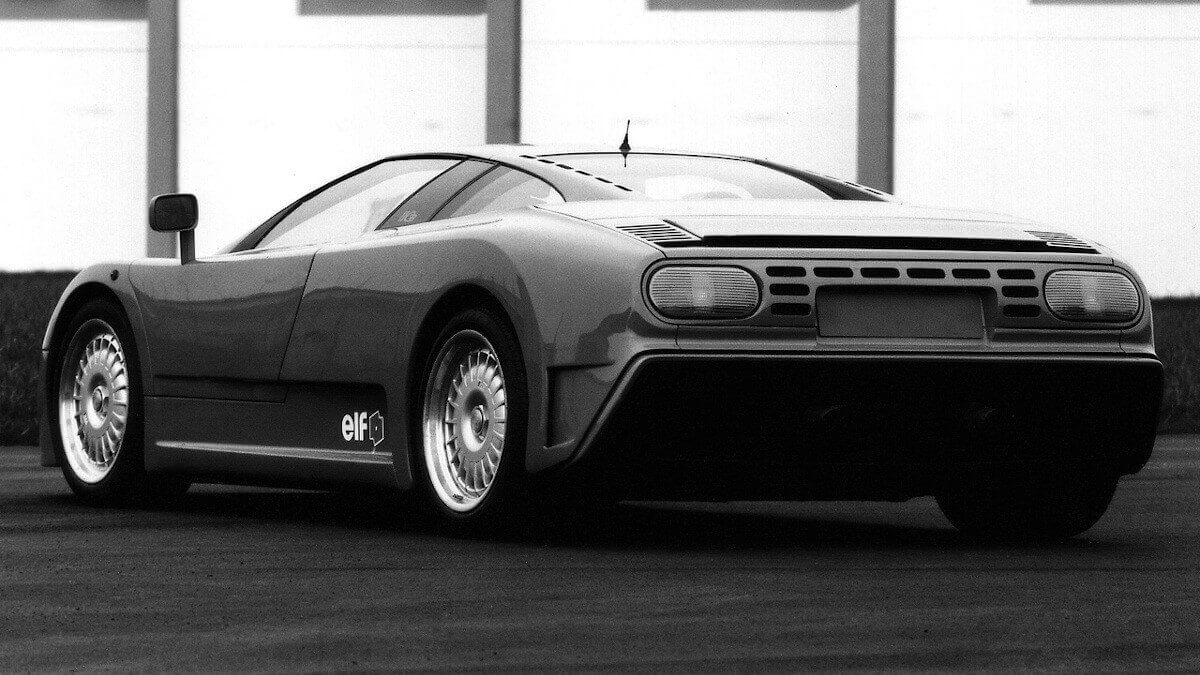 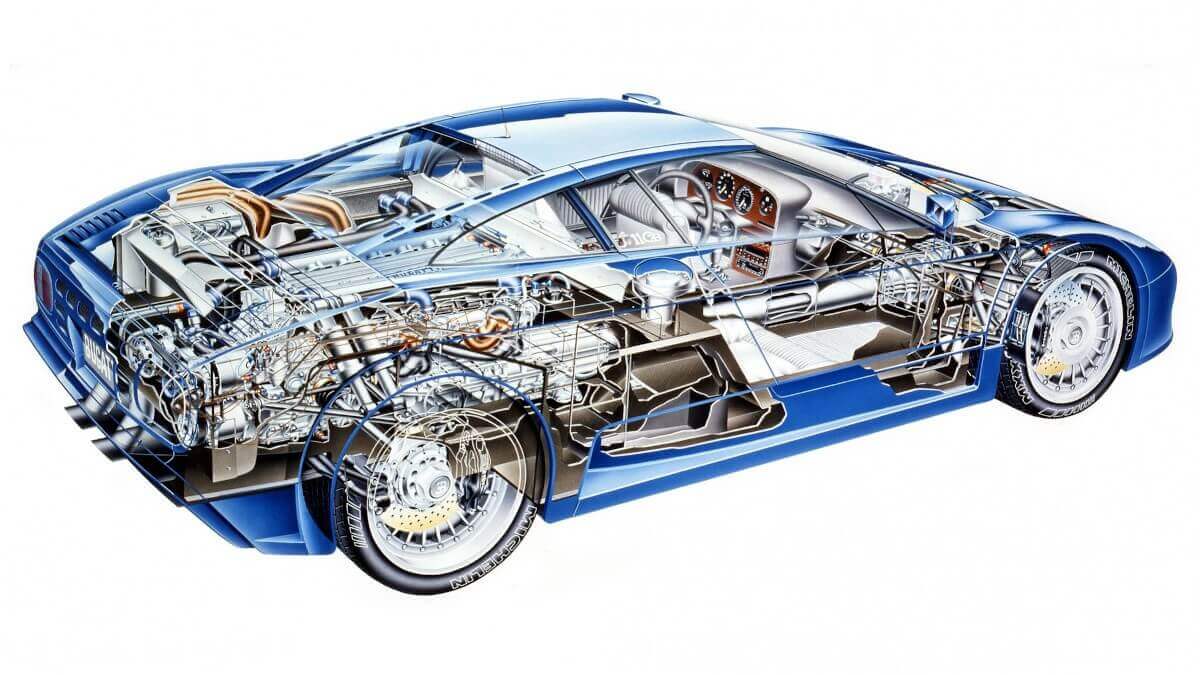 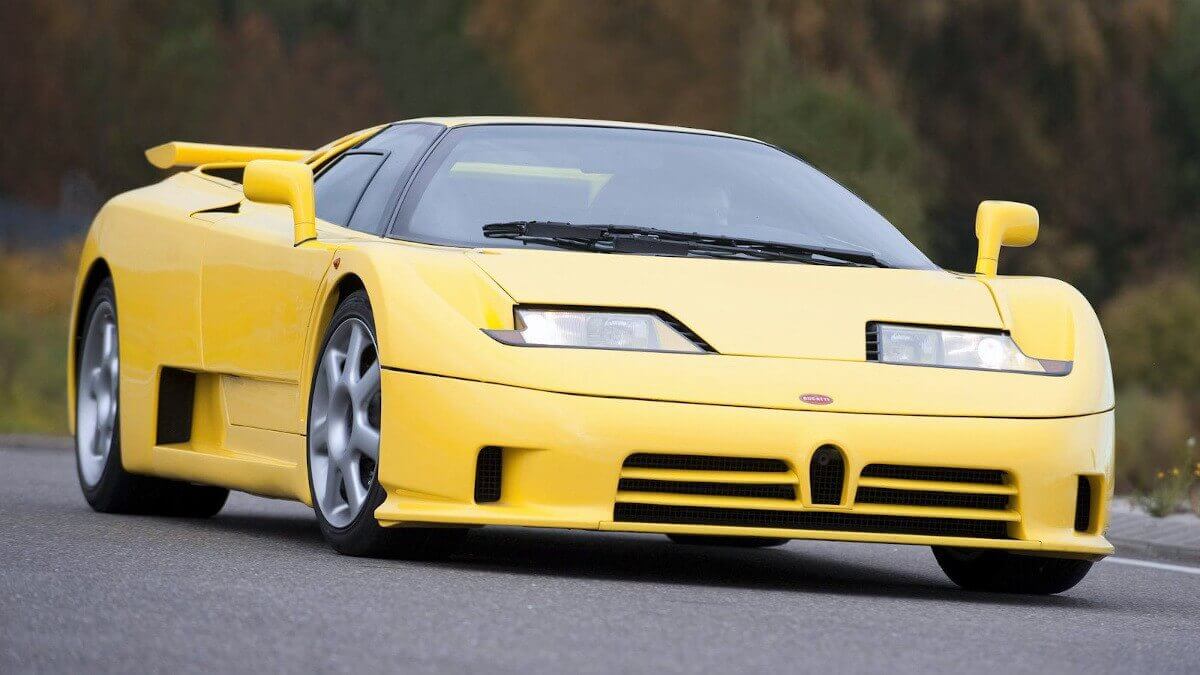 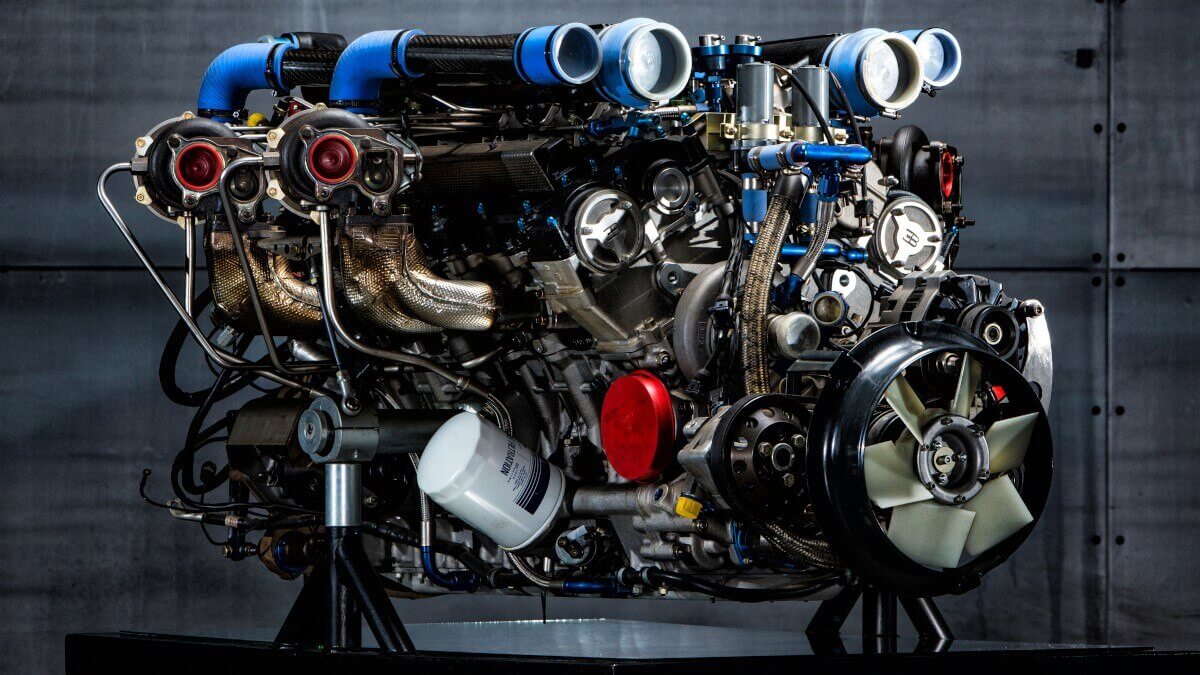 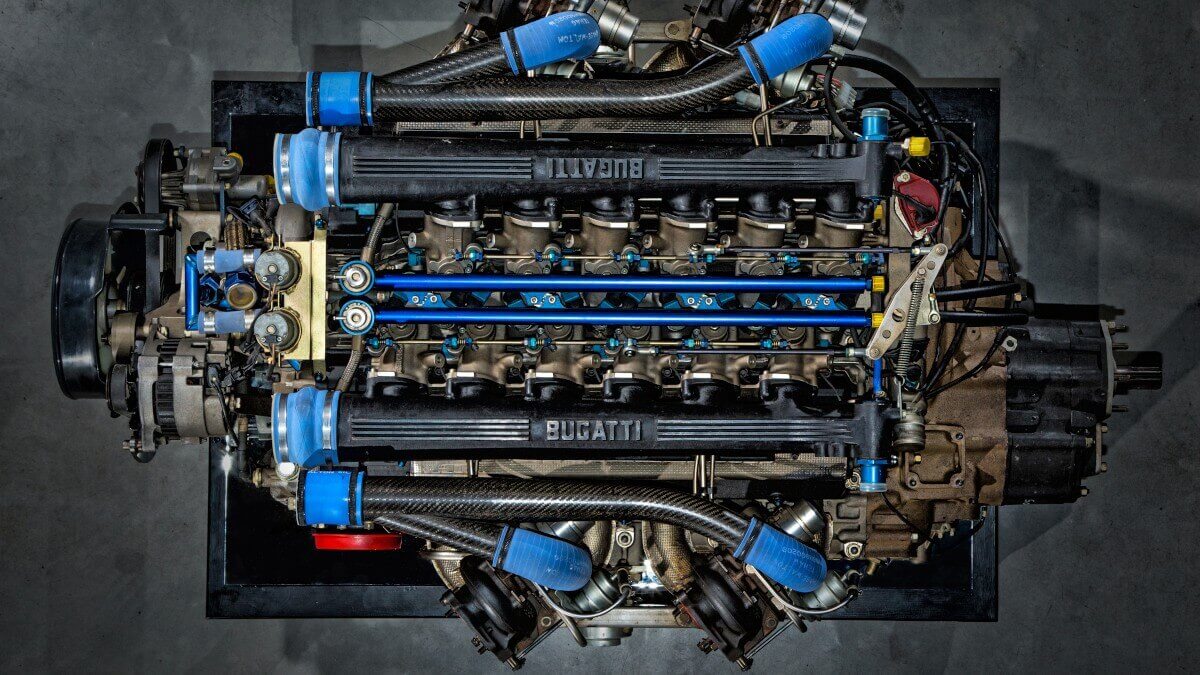 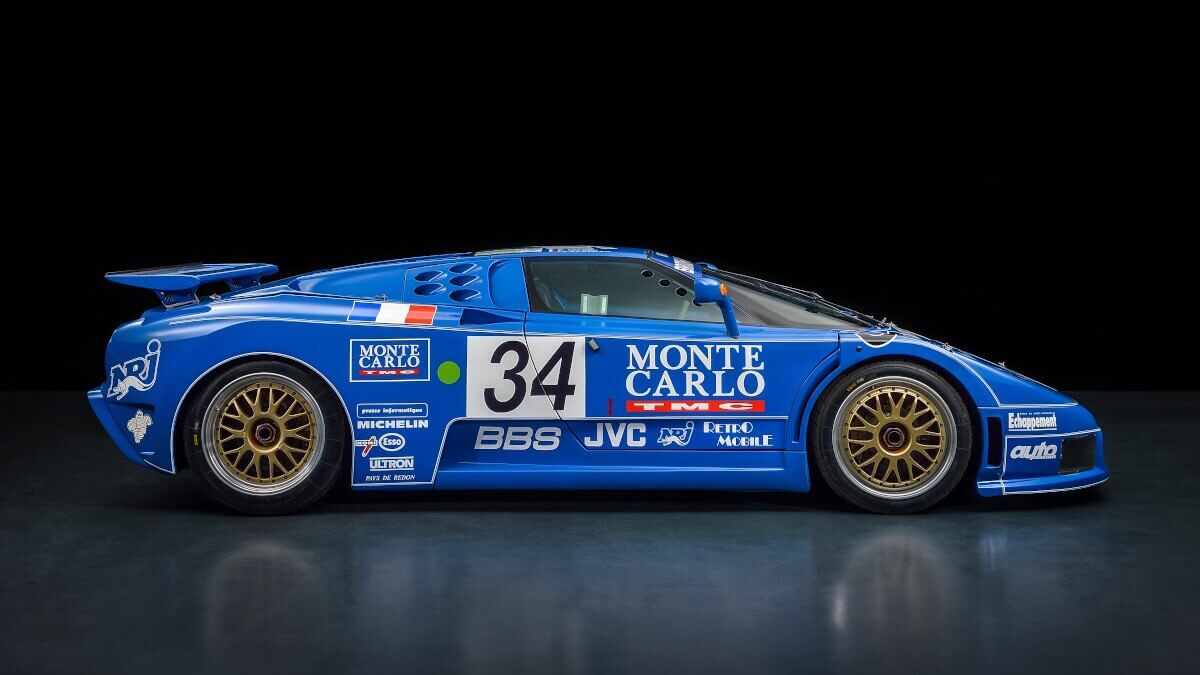 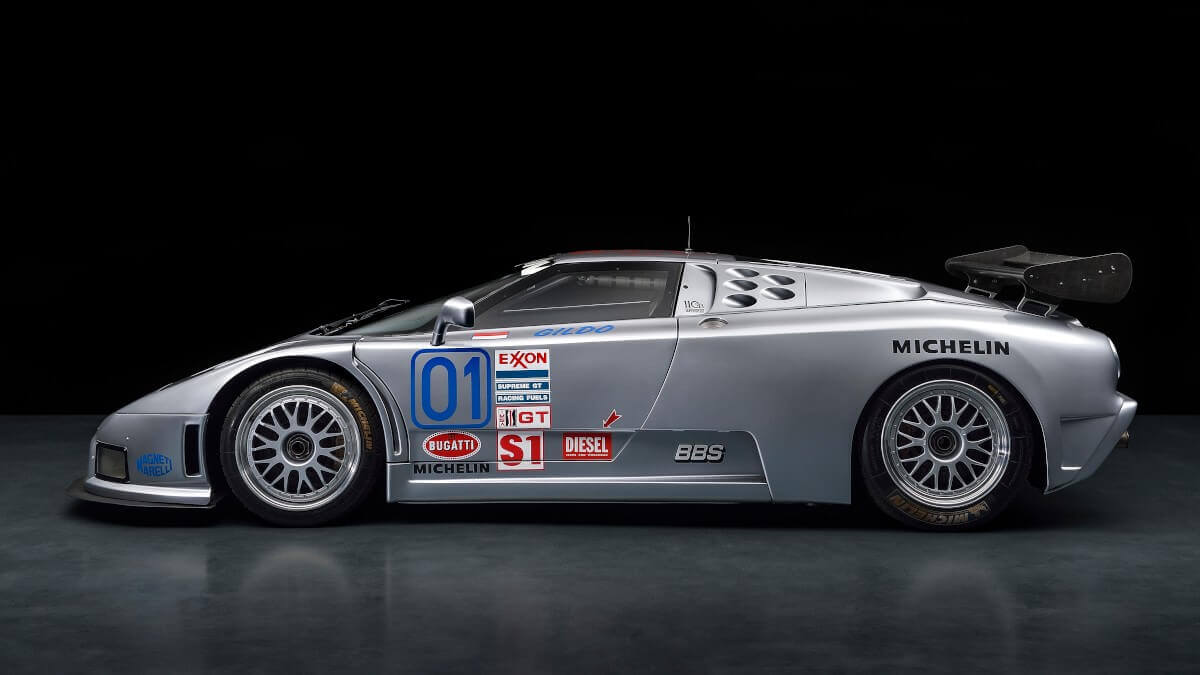 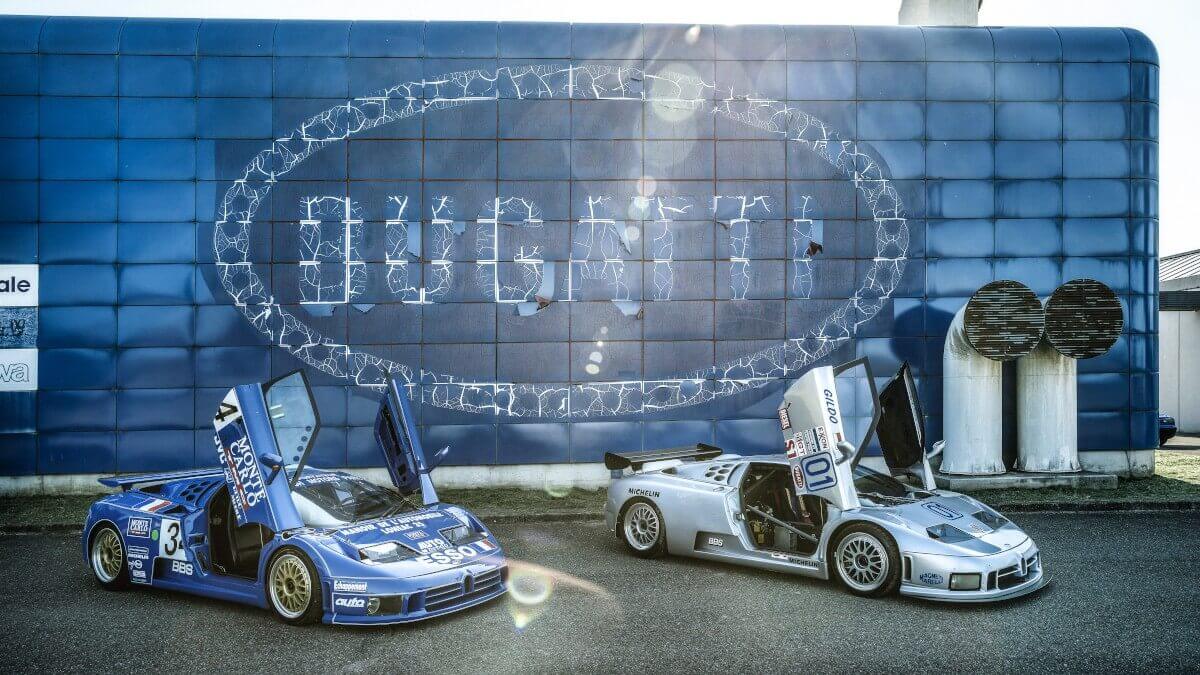 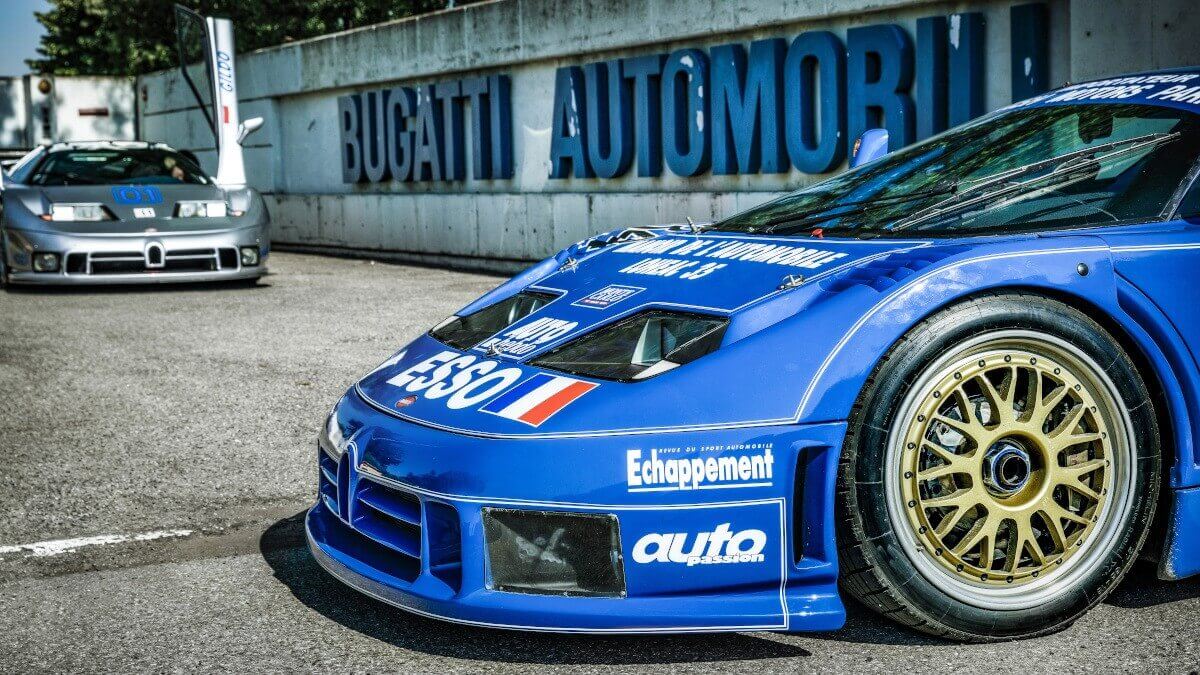 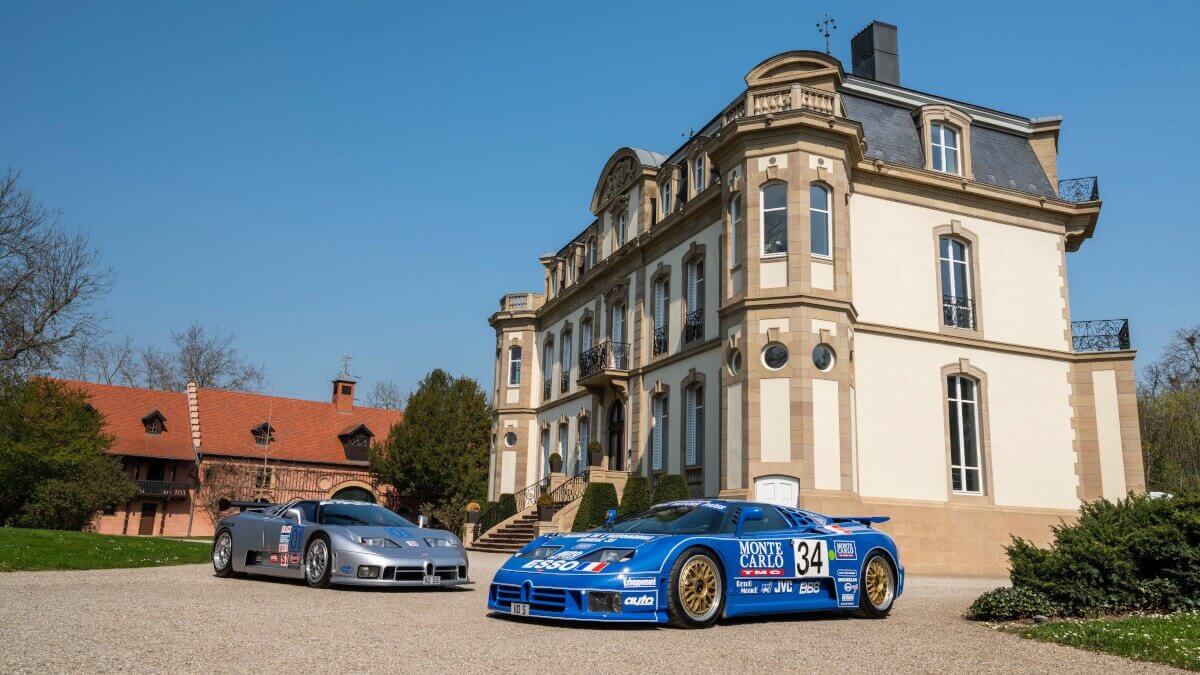 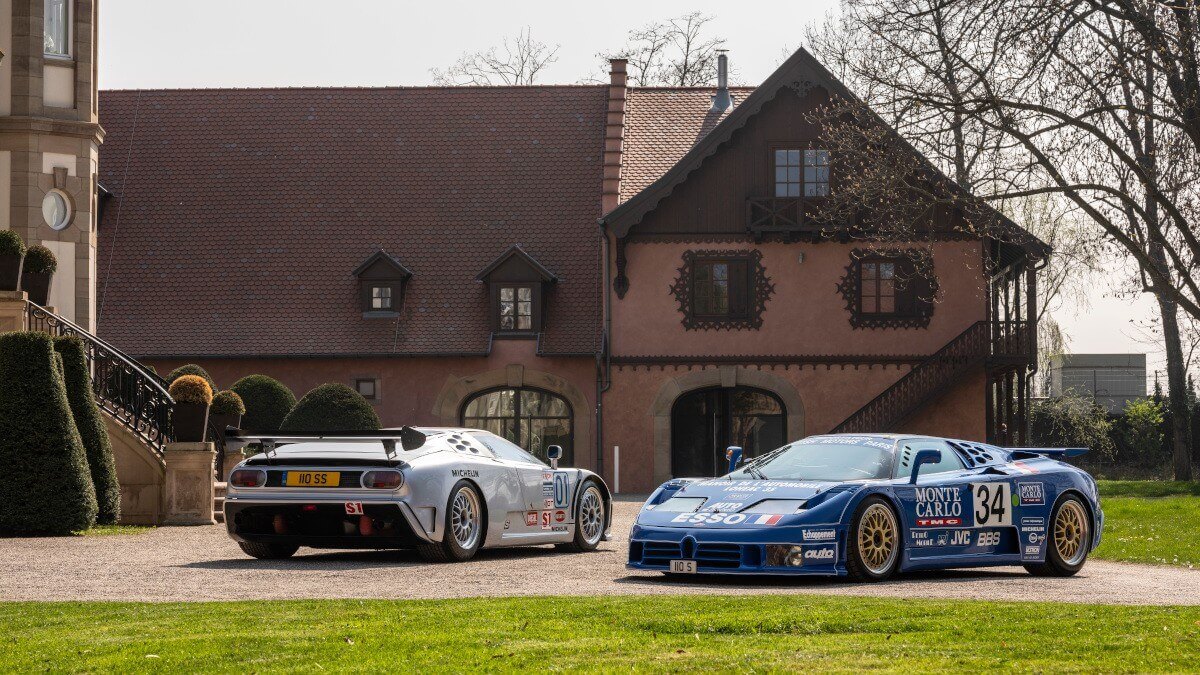 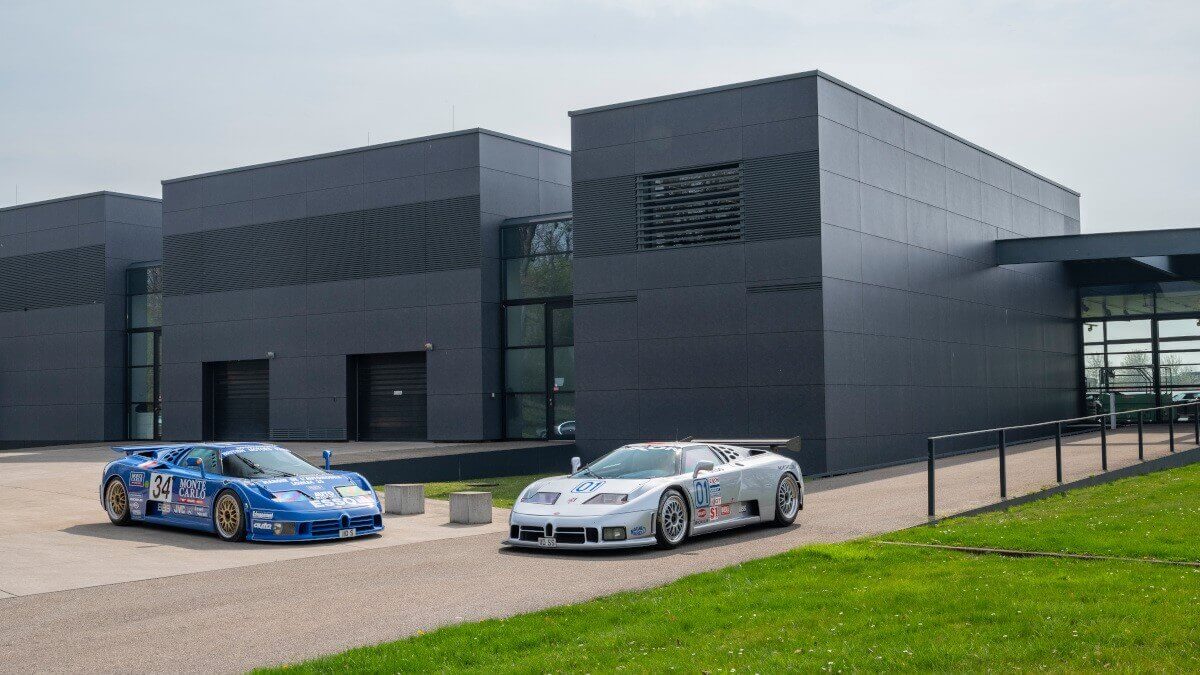 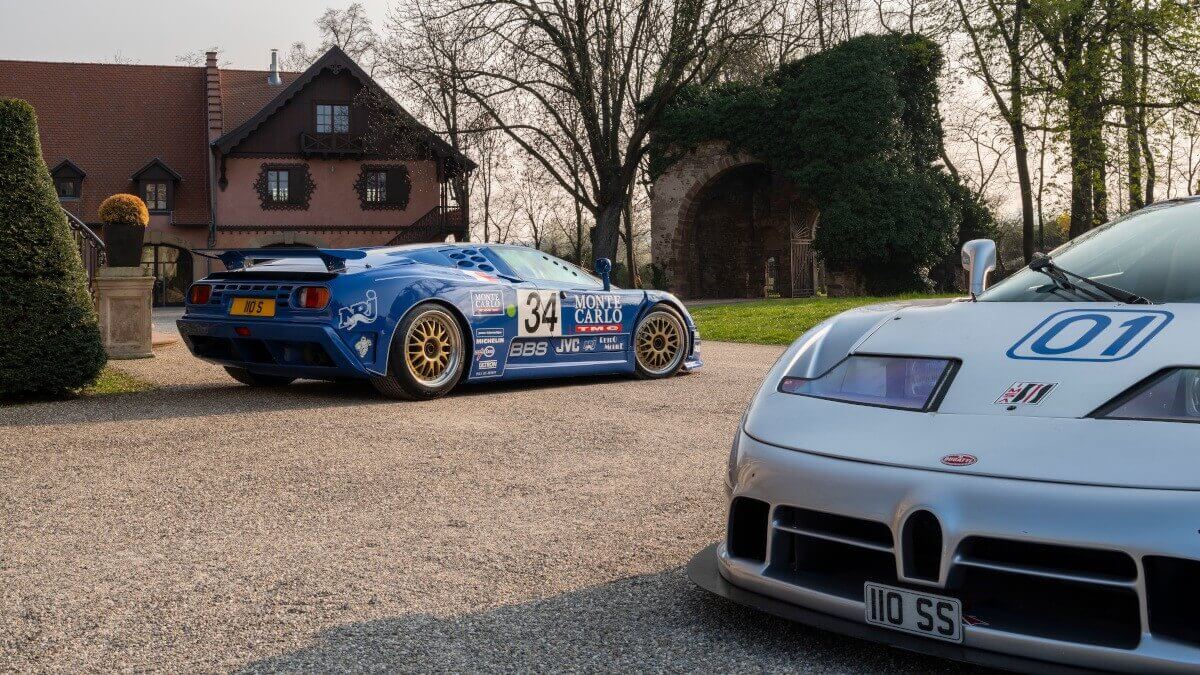 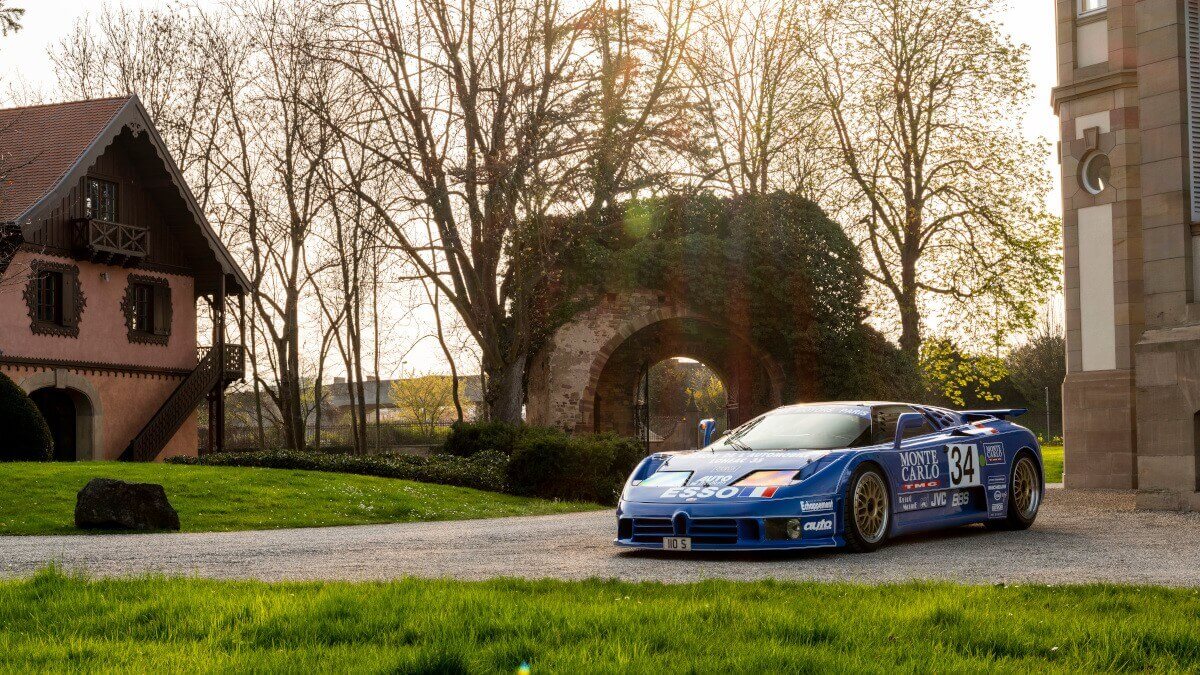 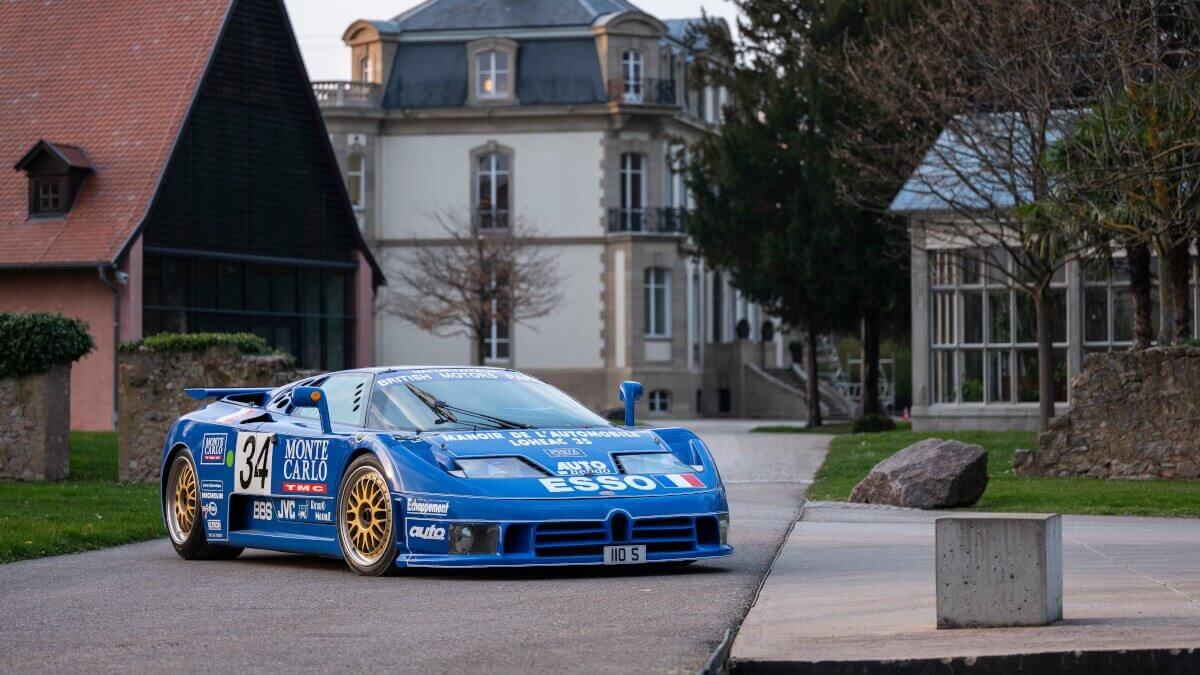 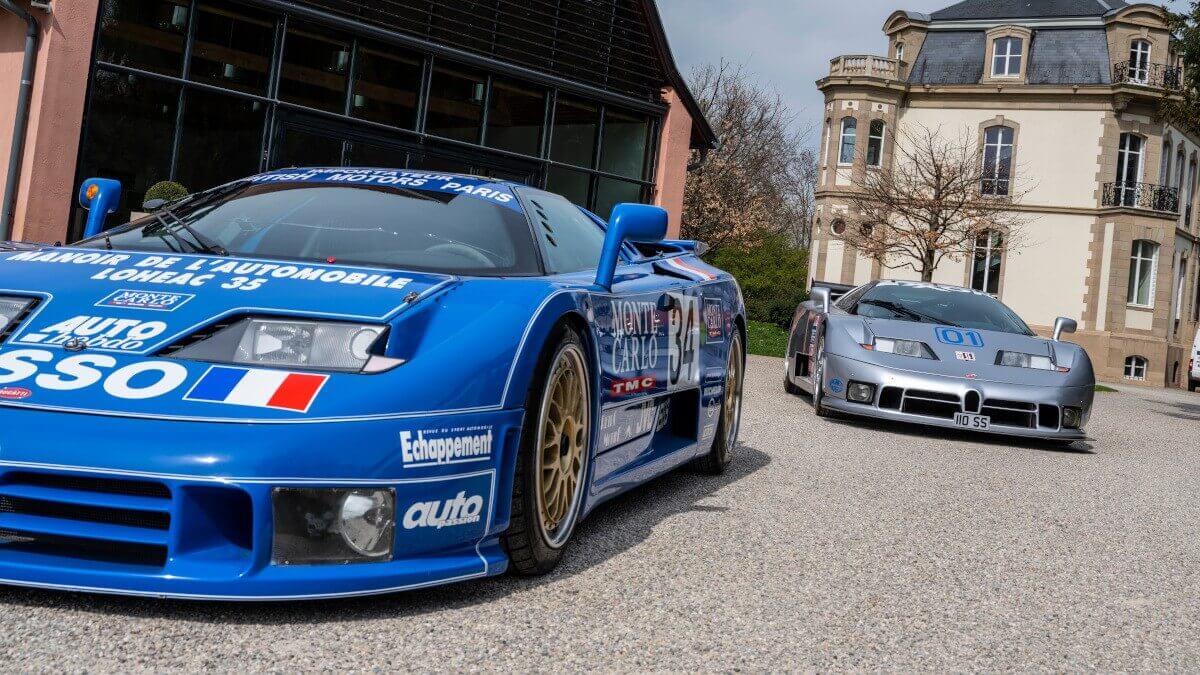 The then most modern automobile factory didn’t forget the rich history of the brand. Artioli had the original entrance door of the former manufactory in Molsheim assembled in the dining room of the employees. The opening took place on 15 September 1990, the 109th birthday of Ettore Bugatti, with a large parade of 77 classic Bugatti models. Meanwhile, development work on a new super sports car has been going on for years and began on white sheet of paper. For the first time in the automotive industry, a carbon monocoque weighing only 125 kilograms and manufactured by the French supplier Aerospatiale served as the basis. The outer skin of the new Bugatti consisted of aramid-reinforced plastic, carbon and aluminium, combined with titanium bolts and magnesium wheels. Behind the passengers, a newly developed V12 with a displacement of 3.5 liters was mounted, in line with the Formula 1 regulations of the time, but pressurized by four turbochargers whose charged air was kept at a low temperature by intercoolers. 60 valves and two camshafts per cylinder bank helped the engine to a rev limit of 8,250 rpm and an initial output of 560 hp. Later this increased to over 600 hp. Via a manual six-speed transmission, the power is transferred to the permanent all-wheel drive with a torque distribution of 27 to 73 percent between the front and rear axles. Acceleration to 100 kph was achieved in an incredible 3.26 seconds, while the topspeed was 351 kph (218 mph).

The standard equipment of the super sports car, which debuted as the Bugatti EB110 in Paris on 15 September 1991, the 110th birthday of Ettore Bugatti, included ABS, air conditioning, power steering, central locking, a high-quality audio system and electric seat adjustment. Inside, the sports seats received fine leather upholstery from Poltrona Frau and wood decor on the dashboard. This is reached through the doors that swing upwards to the front. Shortly after the world premiere of the EB110 GT, the lighter and stronger EB110 S made its debut, while the S stood for Super Sport. Despite initially good order intake, the sports car market collapsed worldwide at the beginning of the 1990s. Romano Artioli had only recently acquired the British brand Lotus. Now he had high liabilities, little demand and thus soon problems to pay his suppliers. Thus it came to the closure of the factory in 1995, from which up to then only about 96 EB110 GT and 32 EB110 Super Sport had rolled out, including two factory racing cars. The German company Dauer took over various unfinished cars and the marketing rights for the EB110 from the bankrupt’s estate, but not the name rights for the Bugatti brand. These went to the Volkswagen Group in 1998 for the third brand chapter, still current today. The latter relocated the company headquarters back to Molsheim in Alsace, bought the Chateau where Ettore Bugatti once received his customers and had it restored, including the outbuildings. Next door, a new manufactory was built in which first the Veyron and now the Chiron as well as the strictly limited Divo are produced. By the way, they still have a carbon monocoque, four turbochargers and all-wheel drive.