Škoda has been known for motorsport successes for a long tim. They first competed in the Rallye Monte Carlo in 1936, and recently a number of vehicles from the Czech brand were also on the grid at the 89th edition of the rally. A good reason for a little historical review. If you’ve actually never heard of the Rallye Monte Carlo or don’t often get involved with motorsport, we’ll first bring you up to speed on this event. It is one of the oldest rallies that still exists today.

First held in 1911, the ‘Monte’ was a pure endurance test for man and machine in the first decades. It was a matter of accurately maintaining speeds and target times and completing some tasks along the track. Today, we know something similar mainly from various classic car rallies. Thanks to the typical date in January, especially the road and weather conditions made for exciting rides. Since 1973, this rally has almost continuously been the prelude and at the same time the highlight in the calendar of the World Rally Championship. Until the 1980s, there was traditionally a rally to the starting point in Monaco. For this purpose, the participants started from various locations in Europe and drove on the roads past checkpoints to Monte Carlo in a target time. Afterwards, the actual rally started. 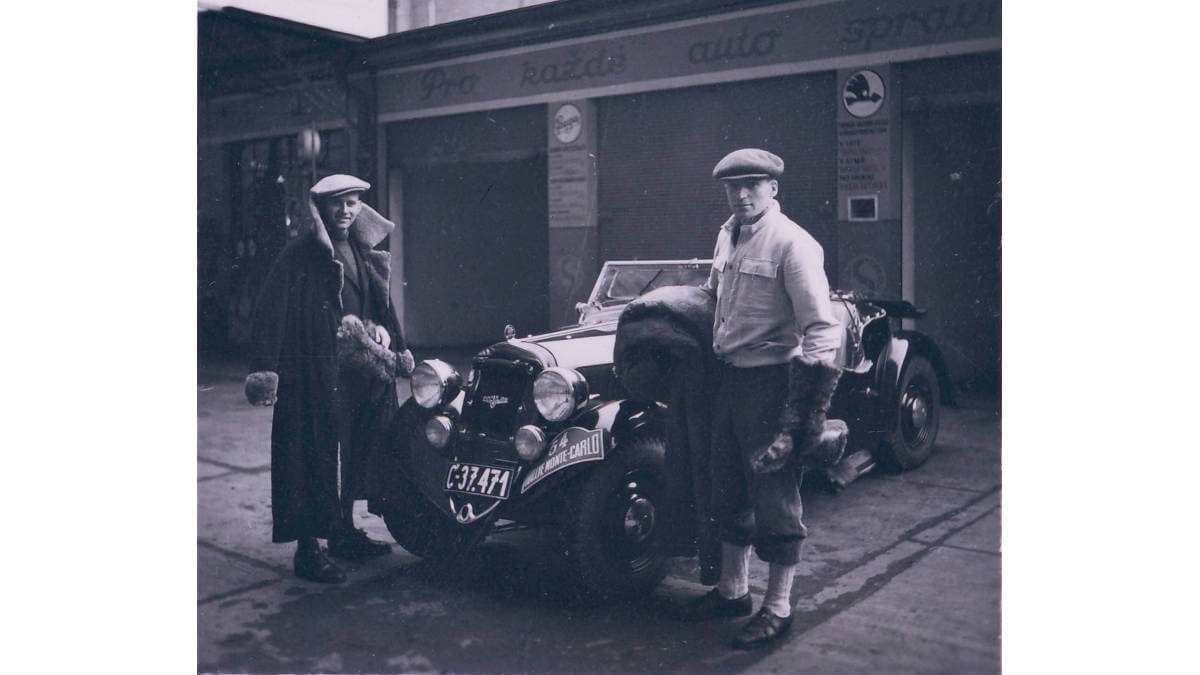 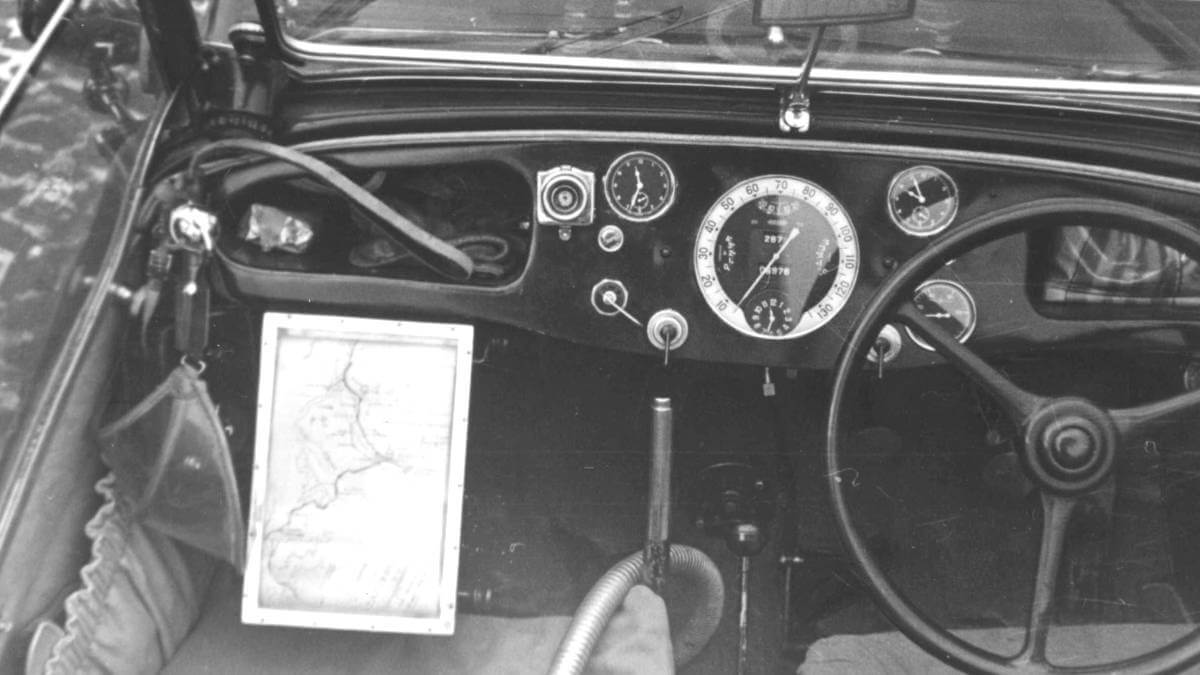 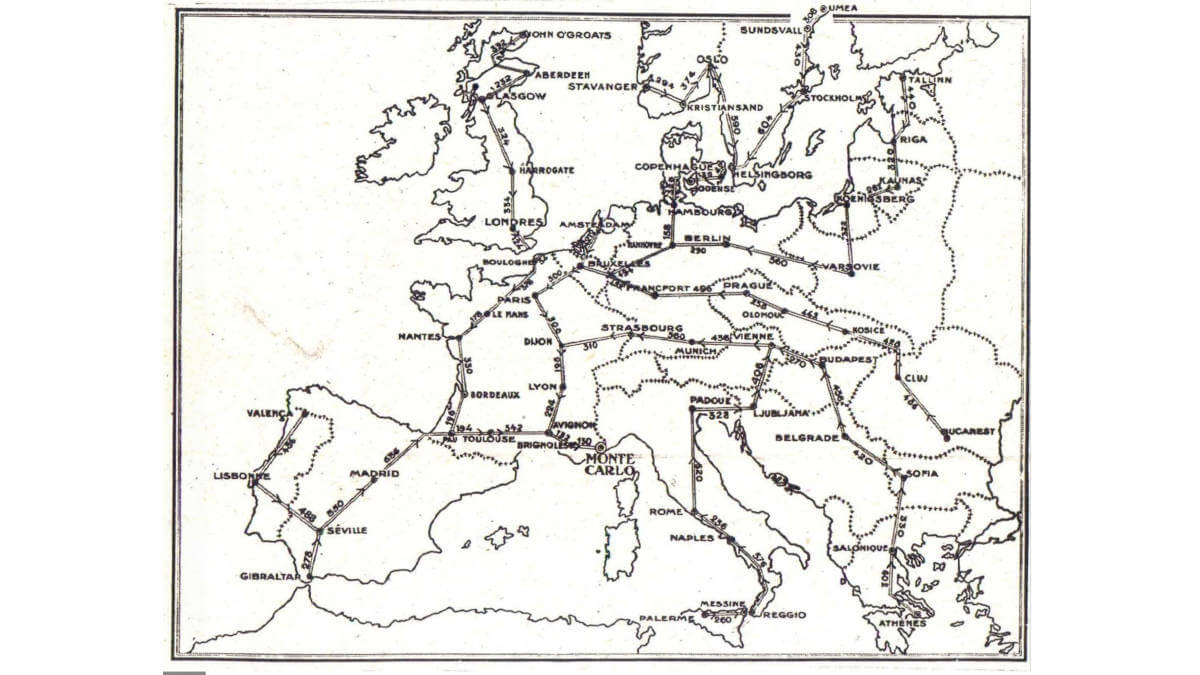 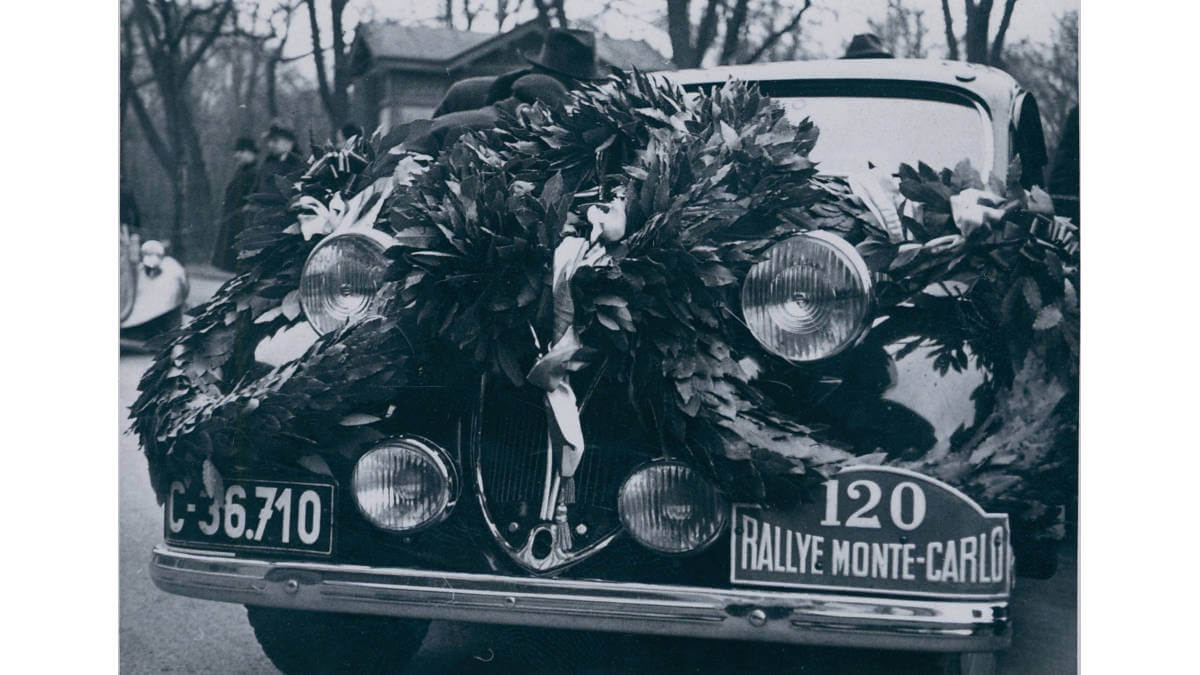 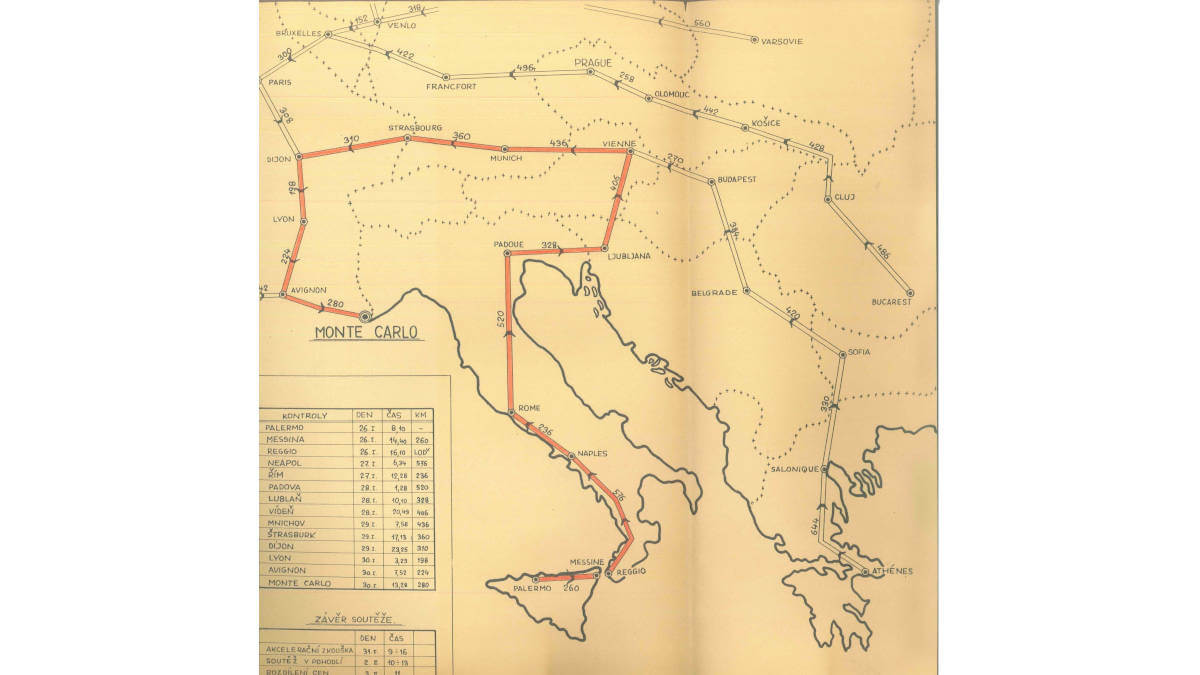 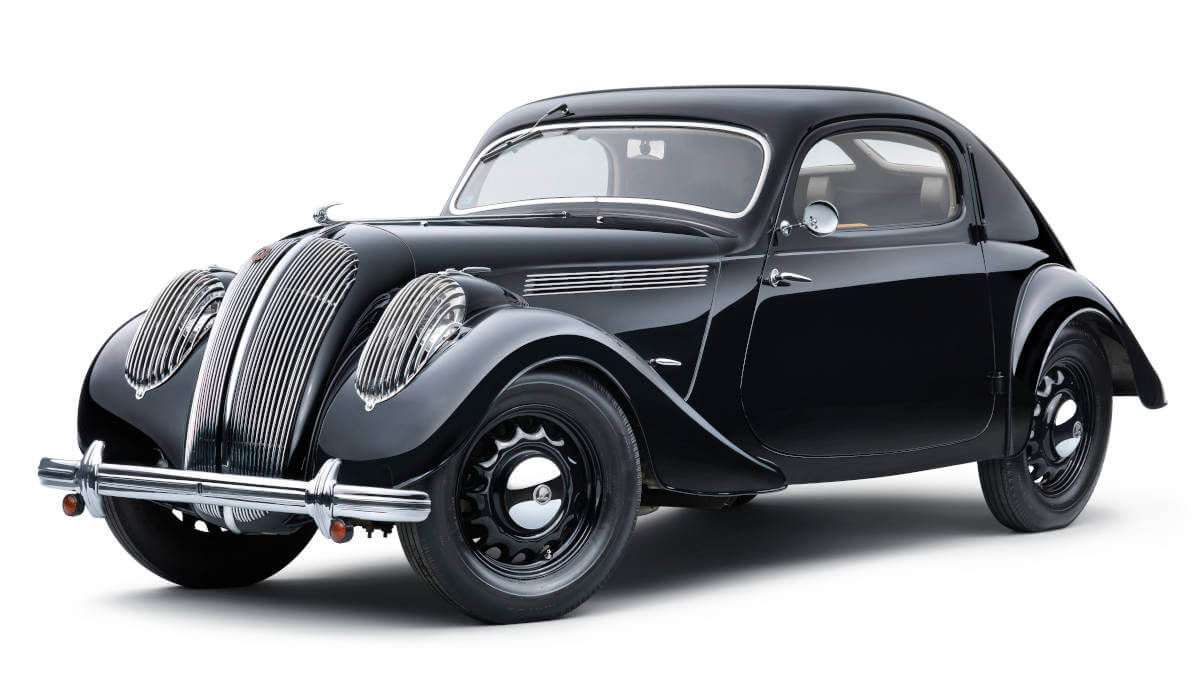 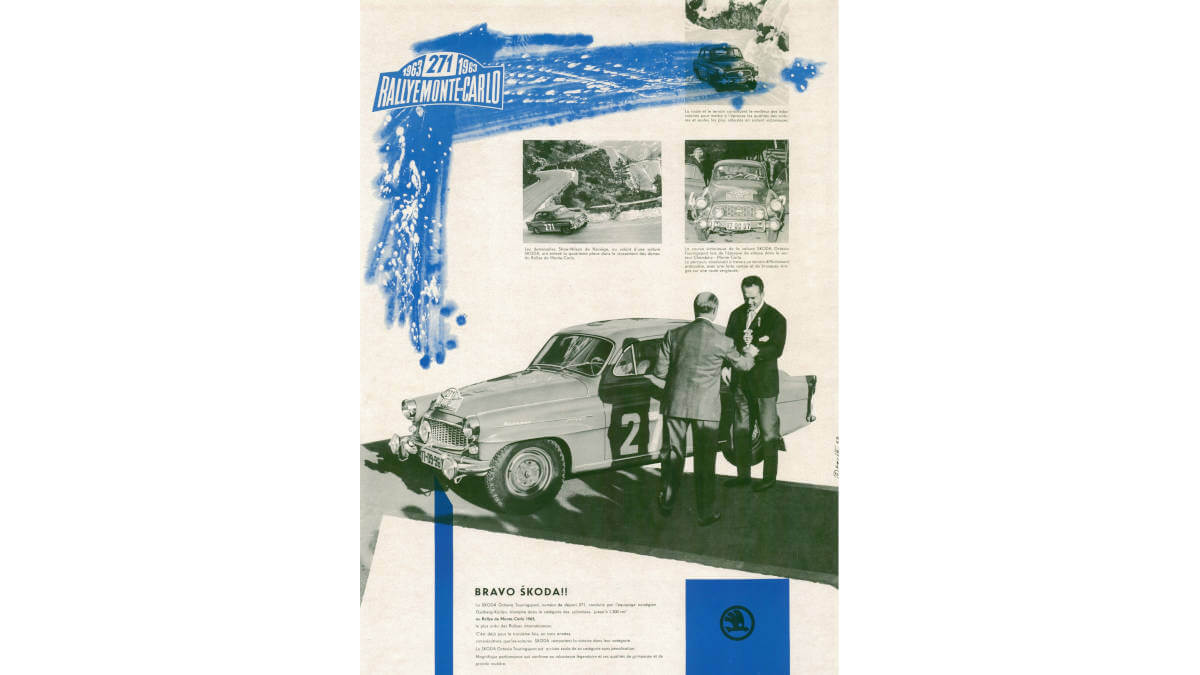 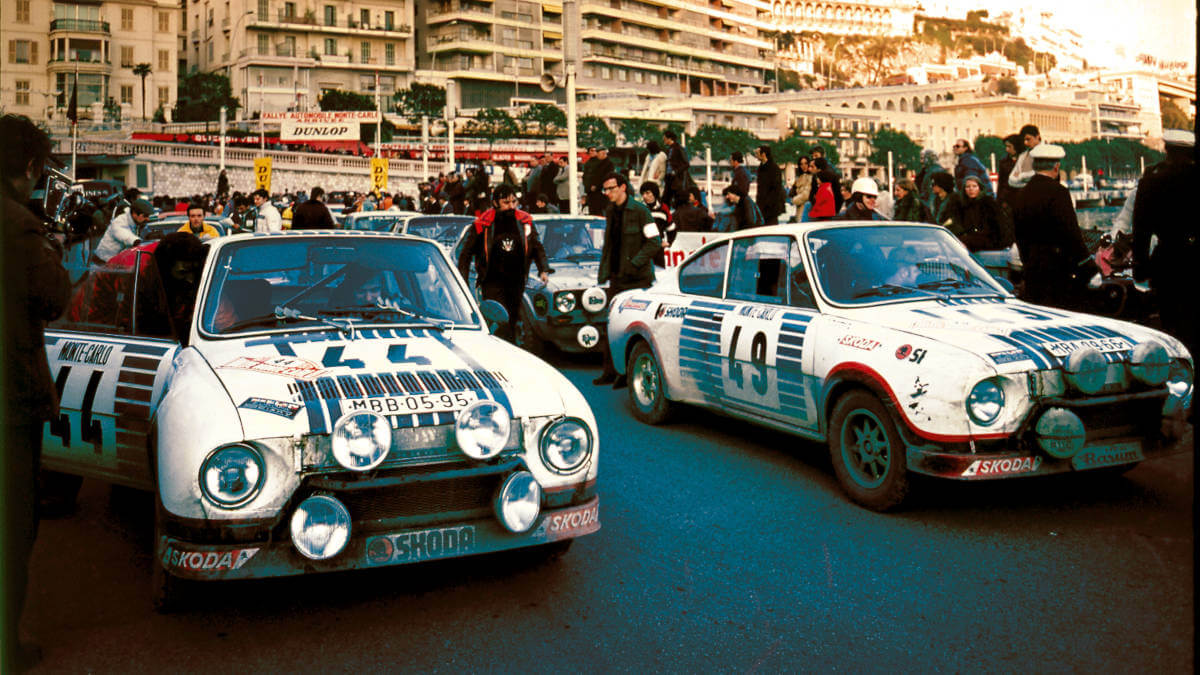 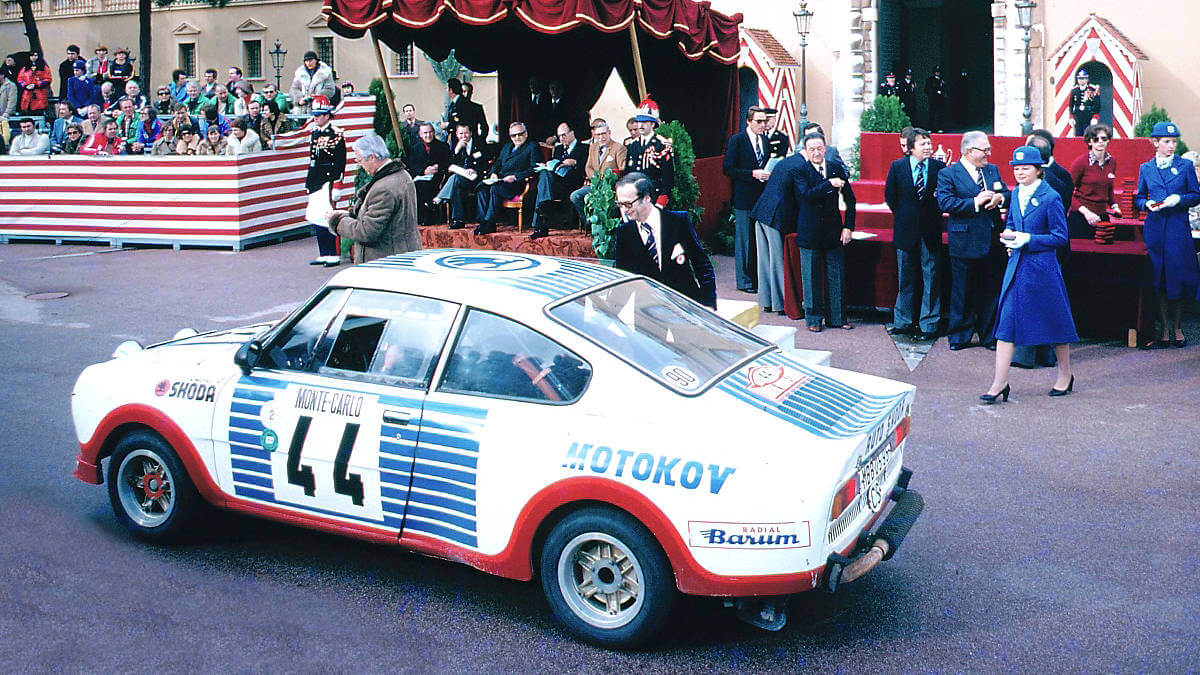 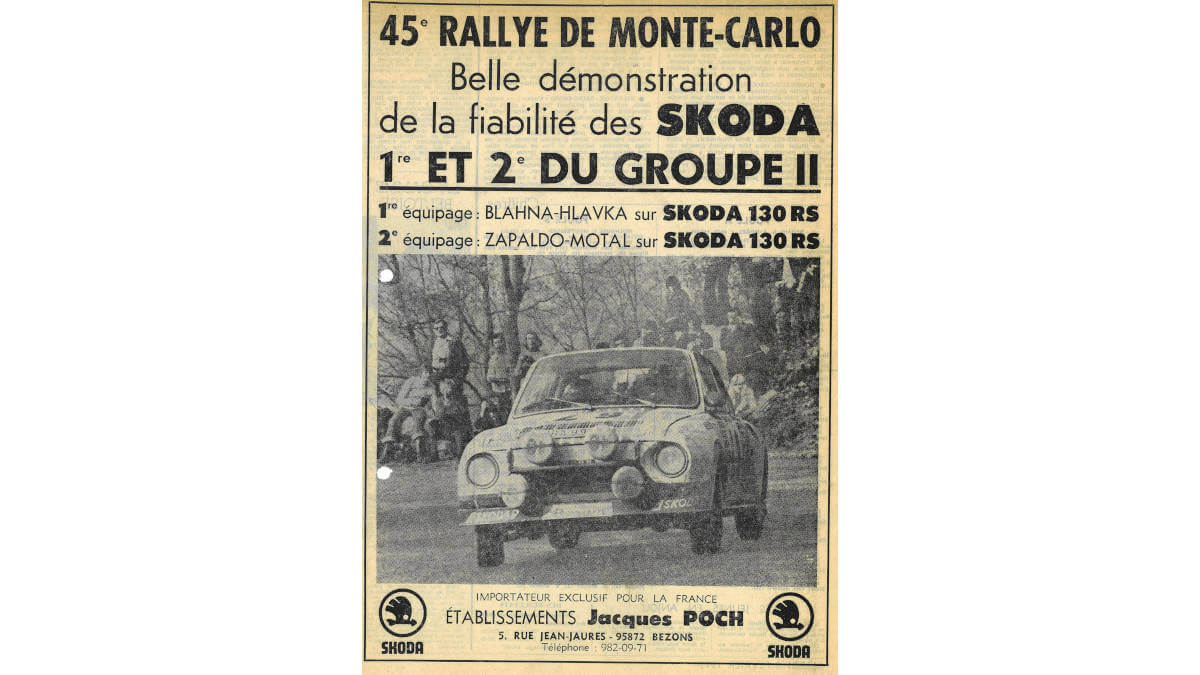 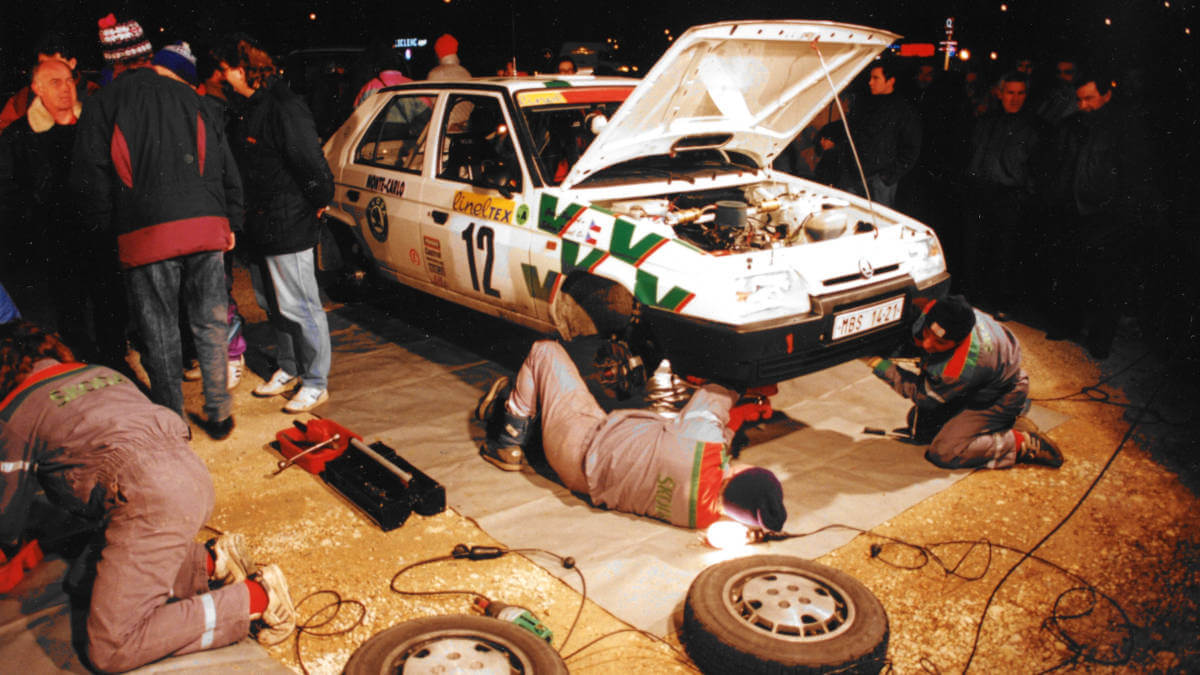 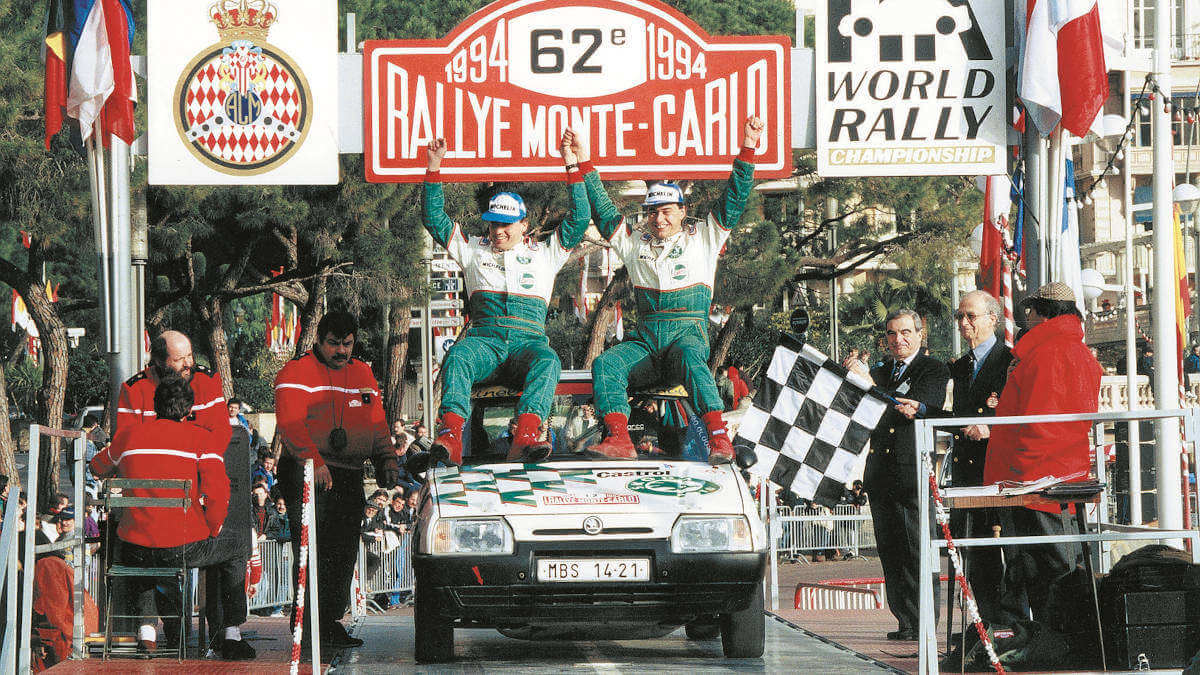 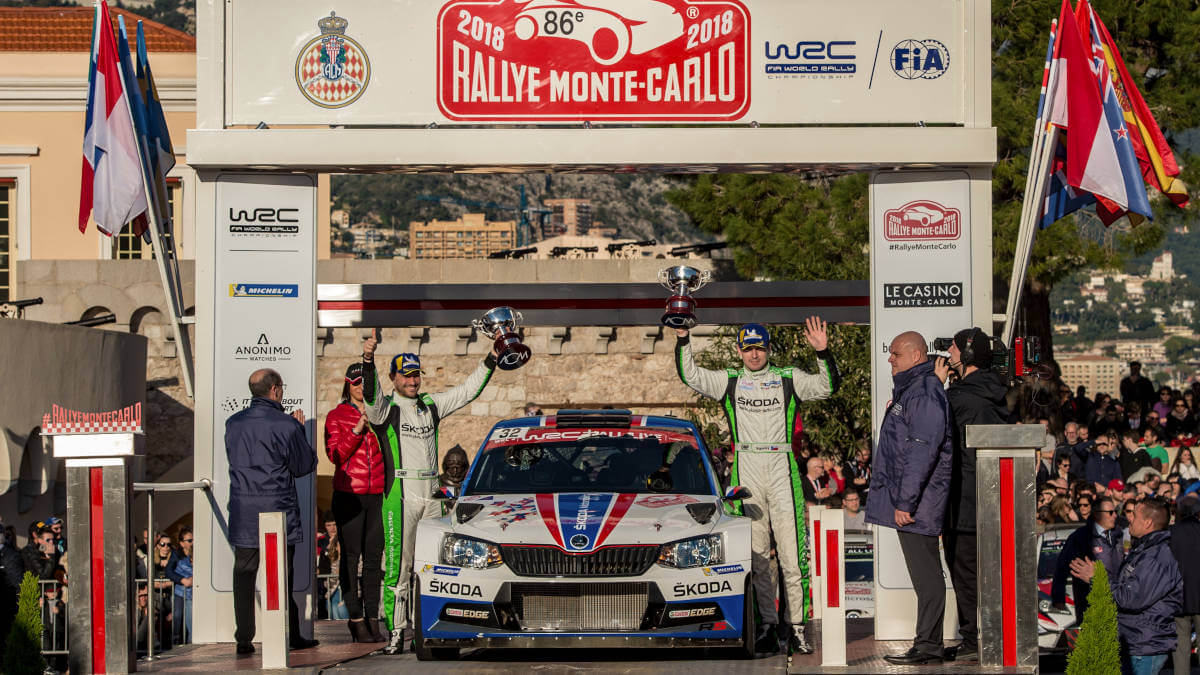 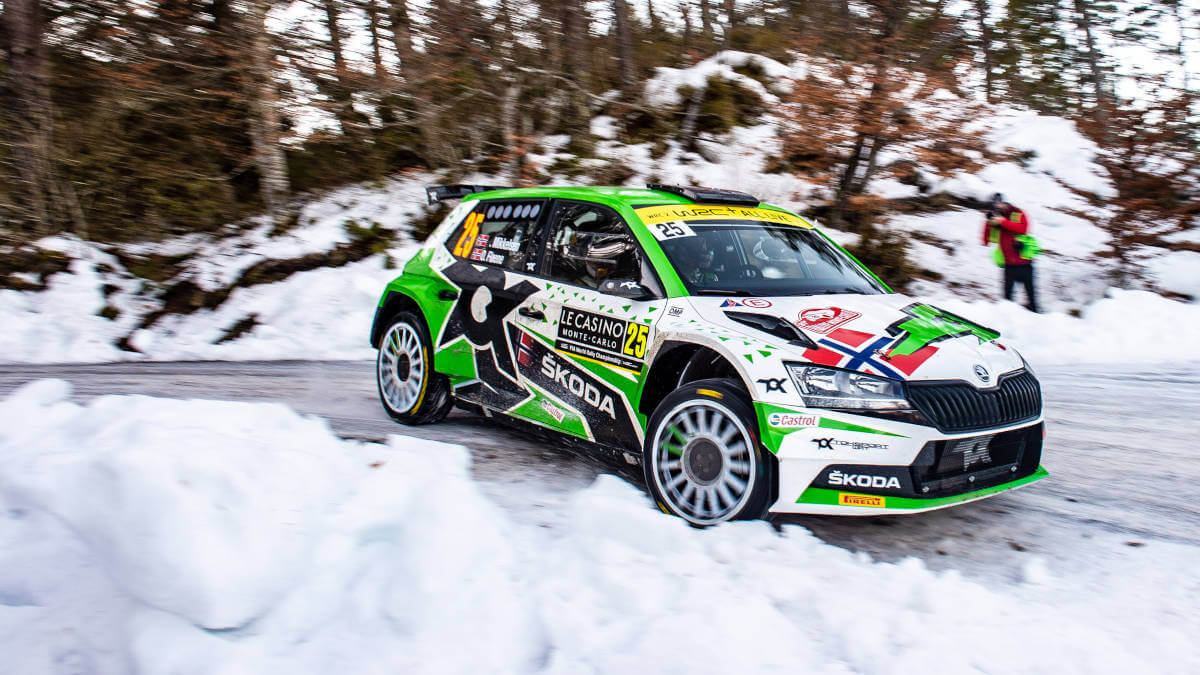 Second place in its displacement class

With the predecessor brand Laurin & Klement and the driver Count Alexander ‘Sascha’ Kolowrat-Krakowský, Škoda was strictly speaking already at the start of the Rallye Monte Carlo in 1912. On January 25, 1936, the winged Škoda arrow logo appeared there for the first time. It was emblazoned on a Popular Sport, which had been fitted with a 1.4-liter engine from the Rapid. This meant that it competed in the class with a displacement of up to 1.5 liters. To enable the longest possible drives, two gasoline tanks with a combined capacity of 170 liters were installed in Mladá Boleslav. Fully fueled and with the crew, the open roadster weighed 960 kilograms. Škoda calculated a topspeed of 110 kph. The driver pairing of Zdeněk Pohl and Jaroslav Hausman set off from Athens in the direction of Monaco. In the end, they finished second in their class. Out of 105 cars that started the rally, only 72 finished.

Škoda took advantage of this success and soon offered the sporty Popular Monte Carlo. Around 70 examples of this sports car were built as Coupé and Roadster until 1939. While Pohl and Hausman still had to do without any kind of service team and support in 1936, this changed over the decades. After World War 2, it took several years before a Škoda was participating in the Rallye Monte Carlo again. The reason for this was the political situation, which made it difficult for motorsport drivers and teams to cross the Iron Curtain. Nevertheless, a private driver took part in the event in 1949 with a Škoda 1101 Tudor. The factory team returned in 1956 and subsequently often used drivers from Norway and Finland. For example, Esko Keinänen and Rainer Eklund not only took class victory up to 1.3 liters in 1961, but also sixth place overall. Škoda repeated this class victory with the Octavia in the following two years.

After the Czechoslovakian brand switched to rear-engined and rear-wheel-drive models, corresponding vehicles were also used for the Monte. In 1977, Václav Blahna and Lubislav Hlávka as well as Milan Zapadlo and Jiří Motai ensured a double victory in the class up to 1.3 liters. They drove the now legendary ‘Porsche of the East’, as the 130 RS is known. In 1991, Škoda competed in the front-wheel drive class with the newly developed compact car Favorit. This was soon followed by the Felicia Kit-Car. Finally, in 1999, the company moved into the big WRC class with the Octavia. With this, Armin Schwarz achieved fourth place overall in 2001. Since 2005, the Fabia has been used as the base car in its respective model generation. The Fabia WRC was followed by the Fabia II Super 2000, which finished second overall in IRC twice. Two overall IRC victories followed in 2012 and 2013. Škoda has been competing in Monte Carlo since 2017 with the third Fabia generation as R5 and Rally2 respectively, winning the WRC2 category in 2018 and 2021, Special edition models with the name ‘Monte Carlo’ have also been available for the road cars since 2011.