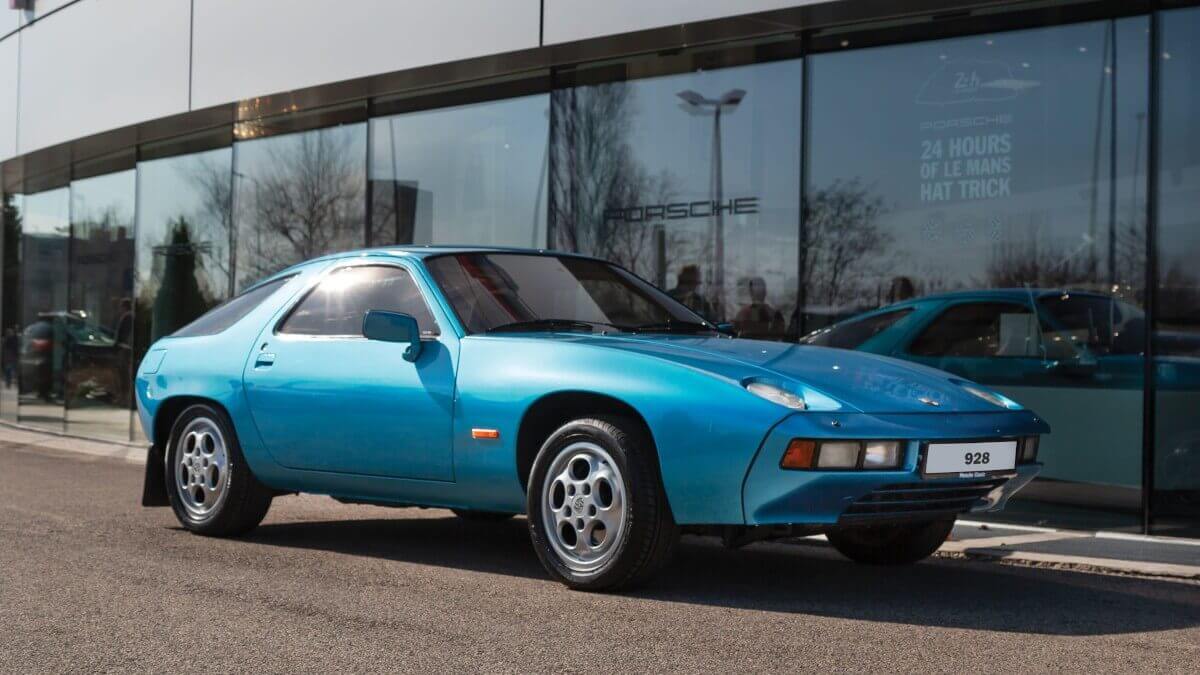 Porsche is known for often following untrodden paths and thinking outside the box when it comes to new model series. Over the course of more than seven decades, this has resulted in the creation of fascinating vehicles that have been technically groundbreaking time and again. When the team in Zuffenhausen got together at the beginning of the 1970s to draw up the specifications for a new vehicle, it wasn’t originally about an additional model but – at least in the minds of some decision-makers – about a successor to the 911. Its basic concept with an engine behind the driven rear axle seemes antiquated and might not be sustainable for long due to safety discussions in the USA at that time, triggered by accidents with the Chevrolet Corvair. Something new was needed. In addition, many Porsche customers had complained about a lack of driving comfort, which they wanted to remedy with a completely new car. On a white sheet of paper, a completely new sports car was created, which at best adopted the brand logos of the 911.

The engine was moved to the front, the combustion chambers were moved in a V-shape and in the same breath two more cylinders were added, which were also water-cooled instead of air-cooled. At the same time, the transmission remained on the rear axle, resulting in the well-balanced transaxle design. Double wishbones all around suspended the wheels individually. Brake pitch compensation on the front axle and a specially developed ‘Weissach’ rear axle, in which the rear wheel on the outside of the bend automatically toe-in when braking or decelerating in corners to prevent oversteering, ensures excellent handling. Incidentally, the name of this axle wasn’t derived from the Porsche test center in the town of the same name, but stood for ‘Winkel einstellende, selbststablilisierende Ausgleichs-Charakteristik’ (angle-adjusting, self-stabilising compensation characteristics). Under the relatively long bonnet sat a 4.5-liter V8 with a 90 degree bank angle, which initially provided 176 kW/240 hp. Both cylinder banks had one overhead camshaft each. Power was transmitted to the rear wheels either via a manual five-speed transmission or a three-speed automatic gearbox purchased from Mercedes-Benz. 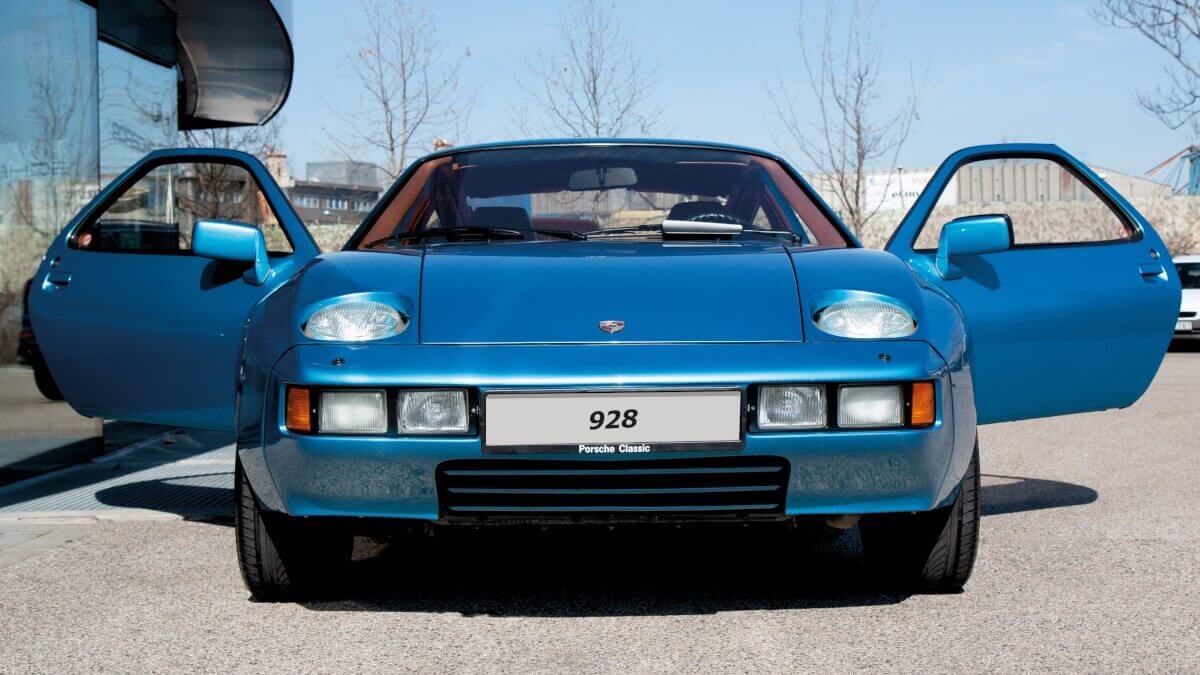 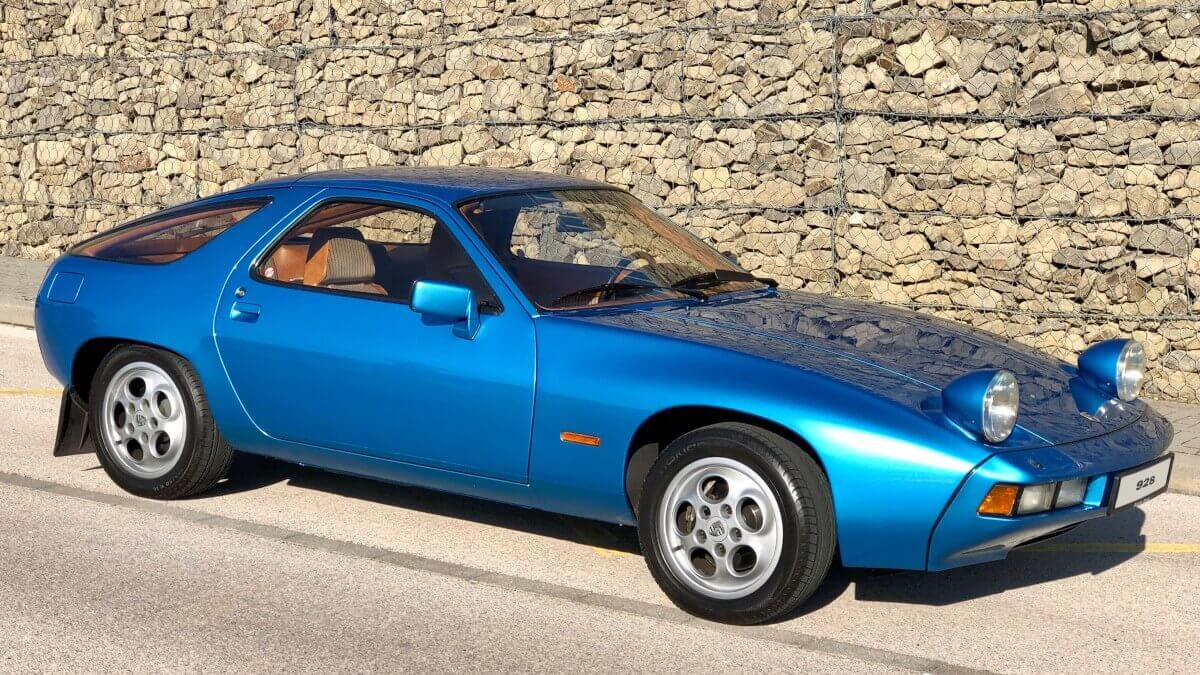 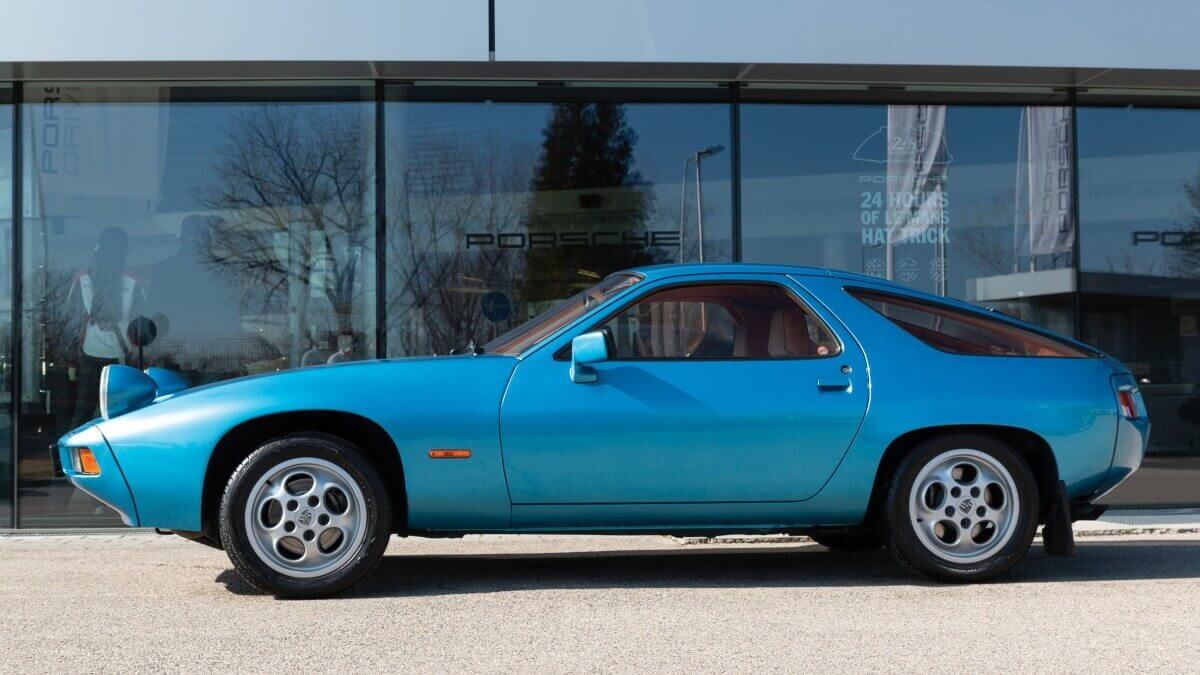 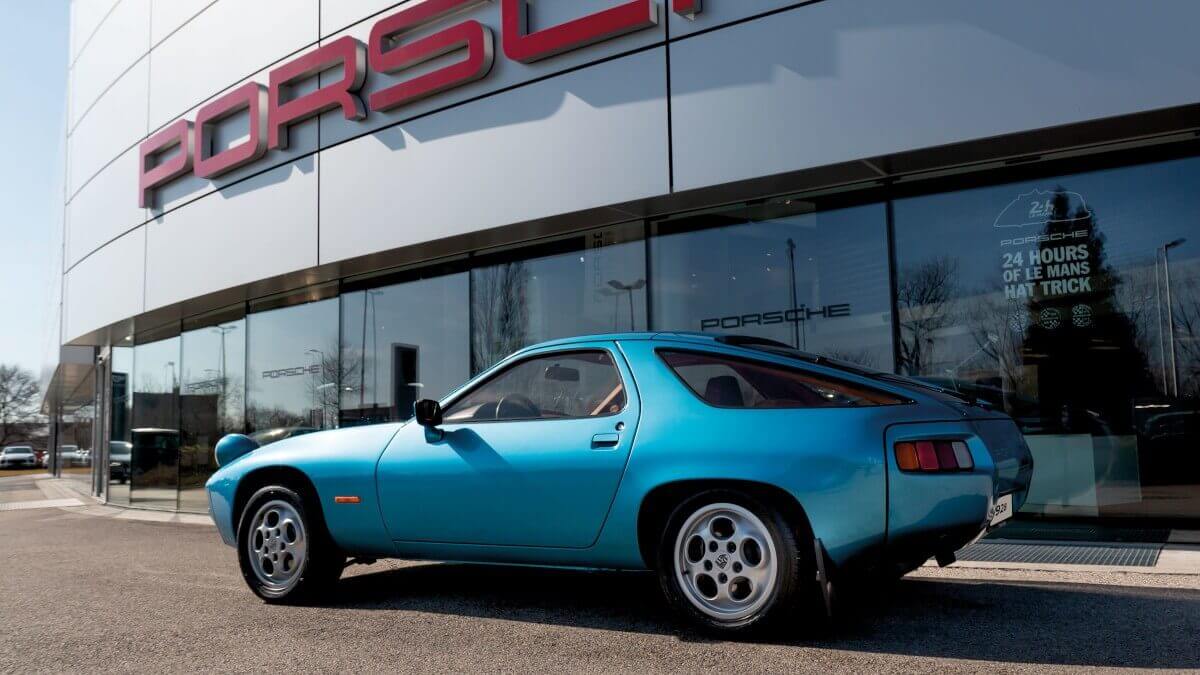 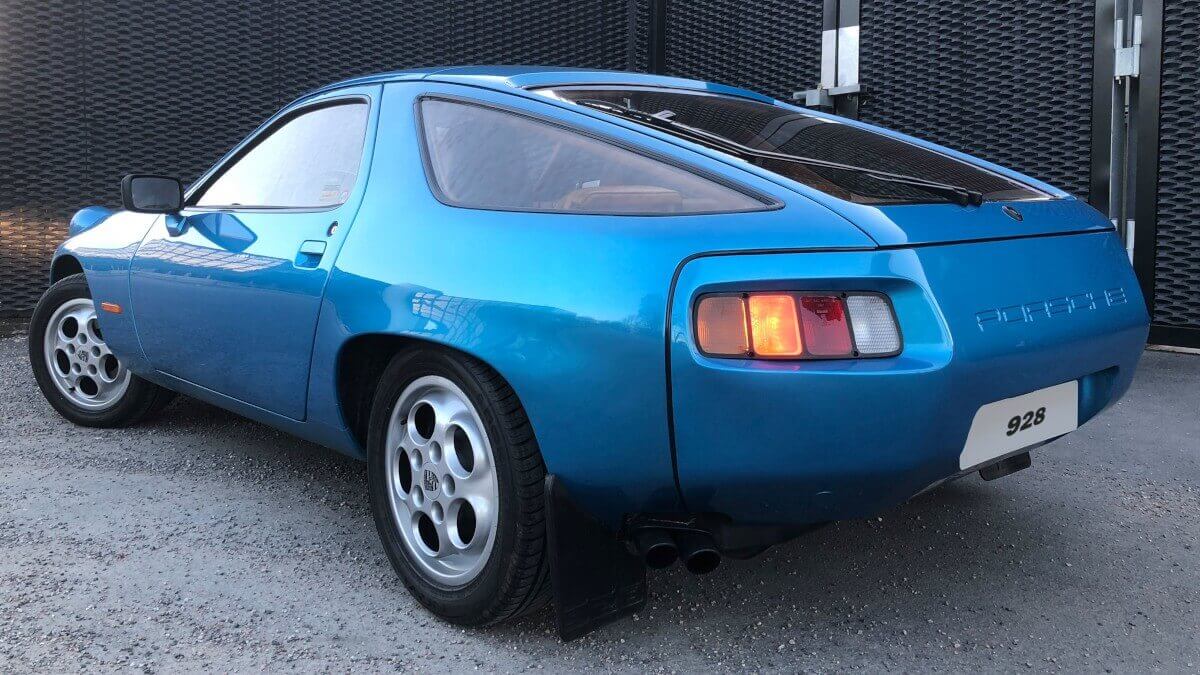 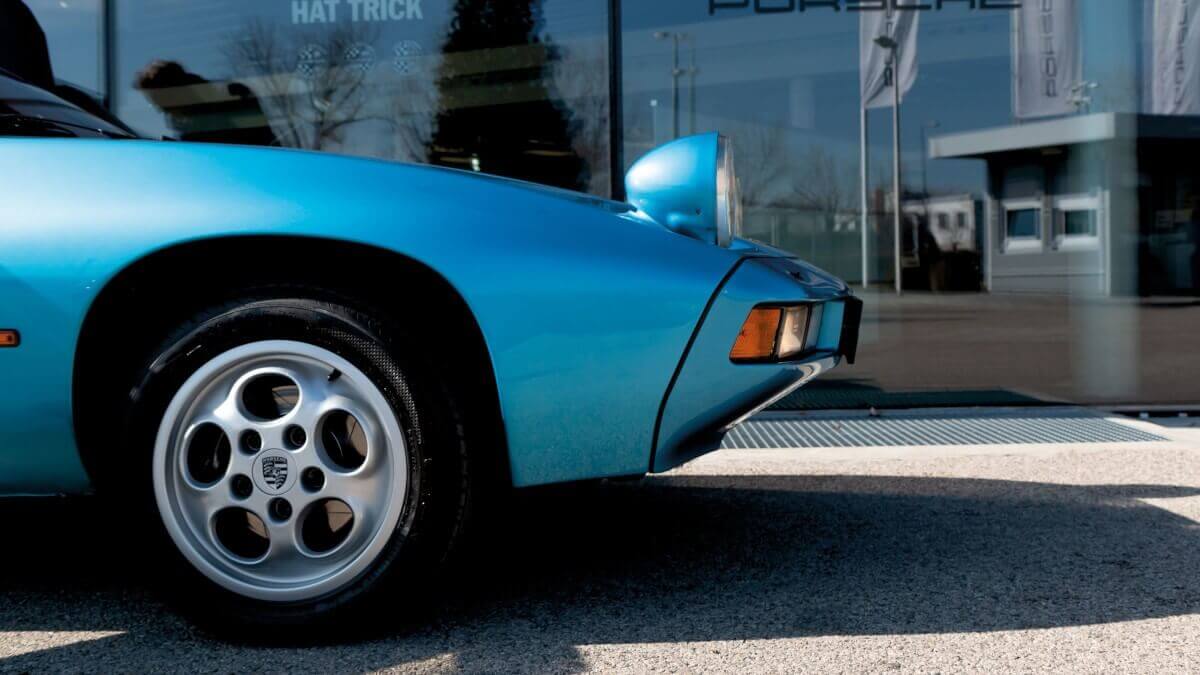 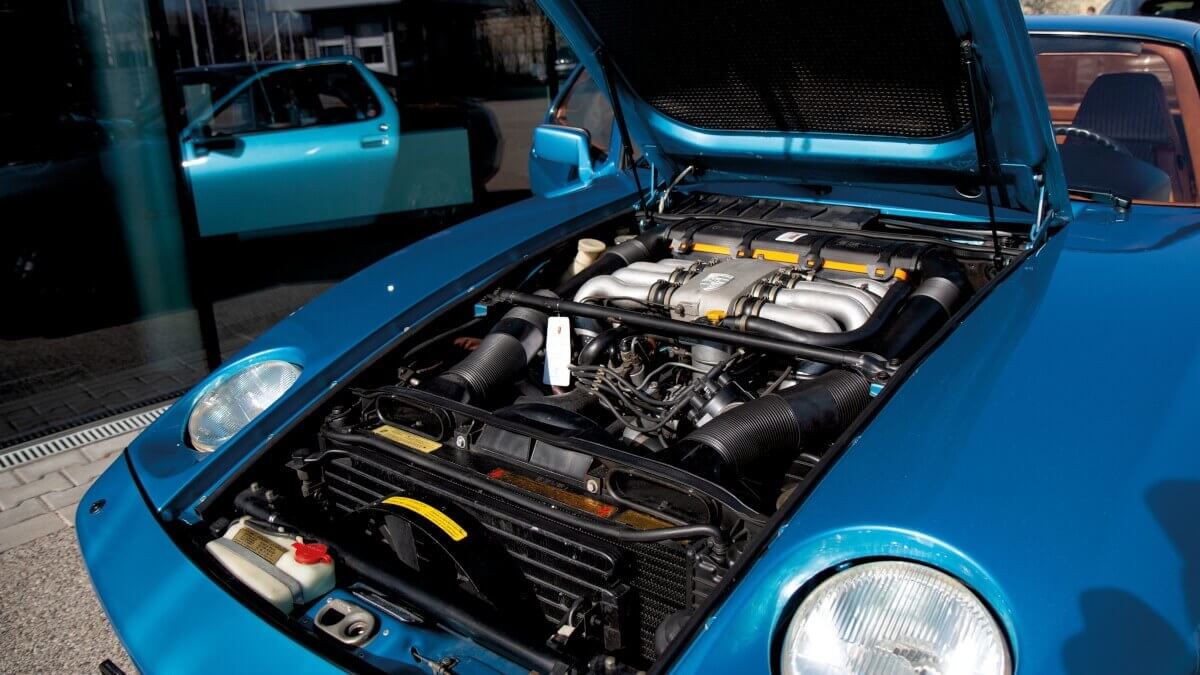 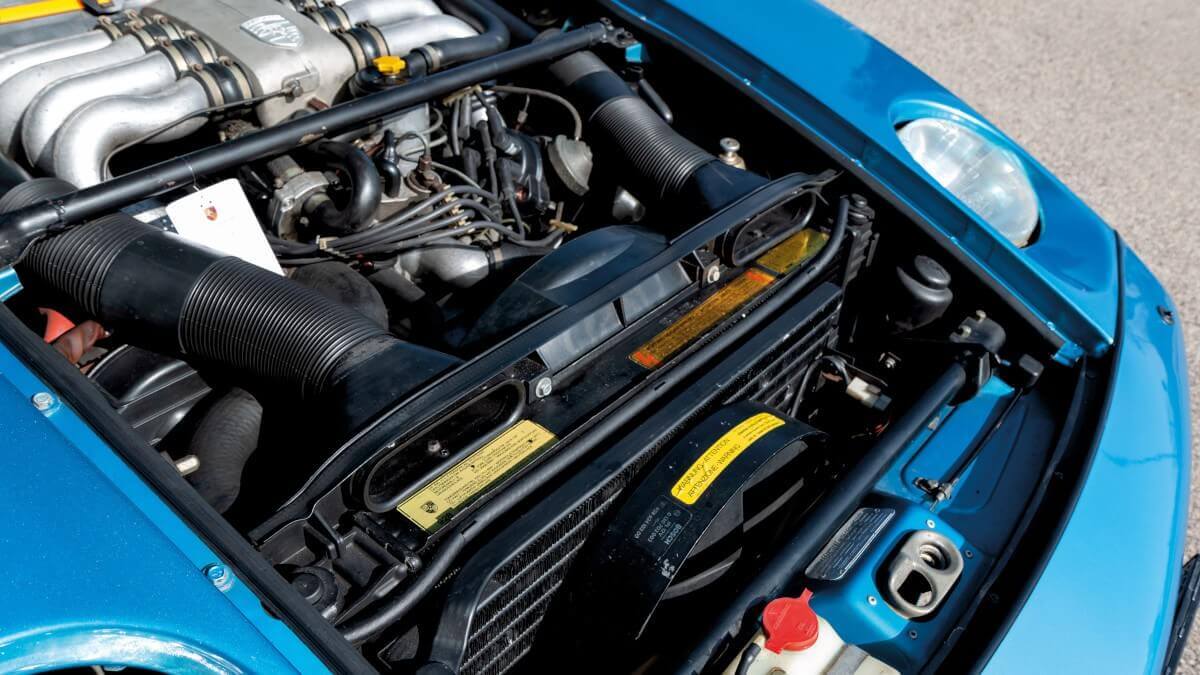 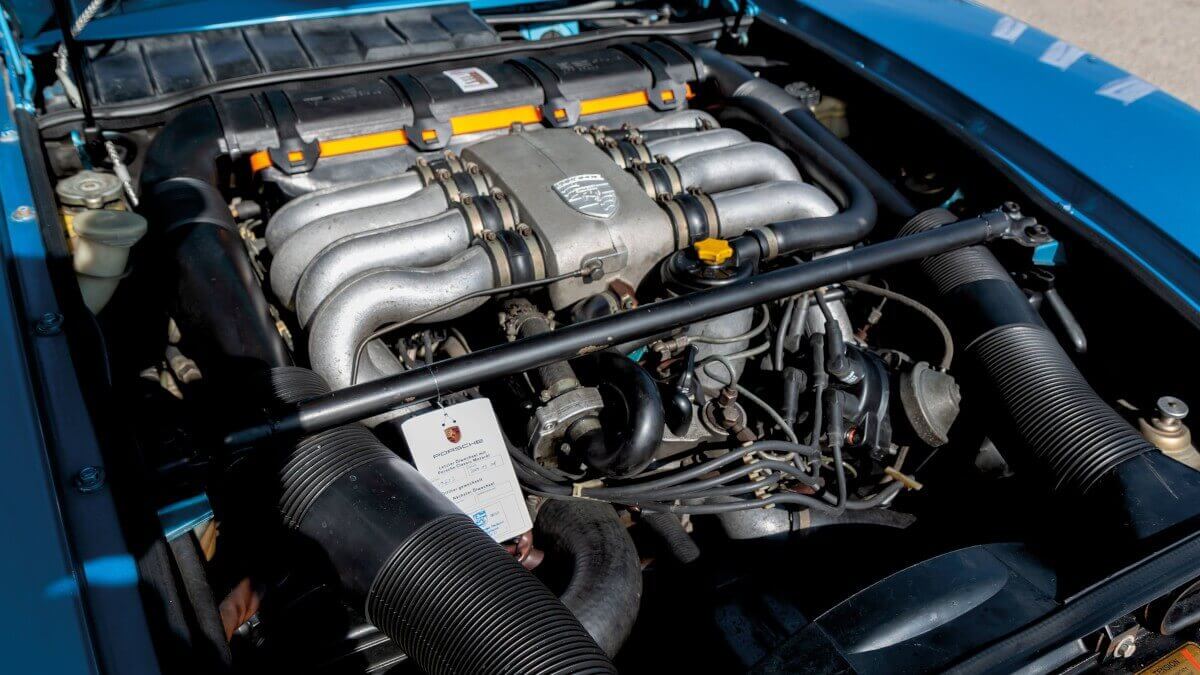 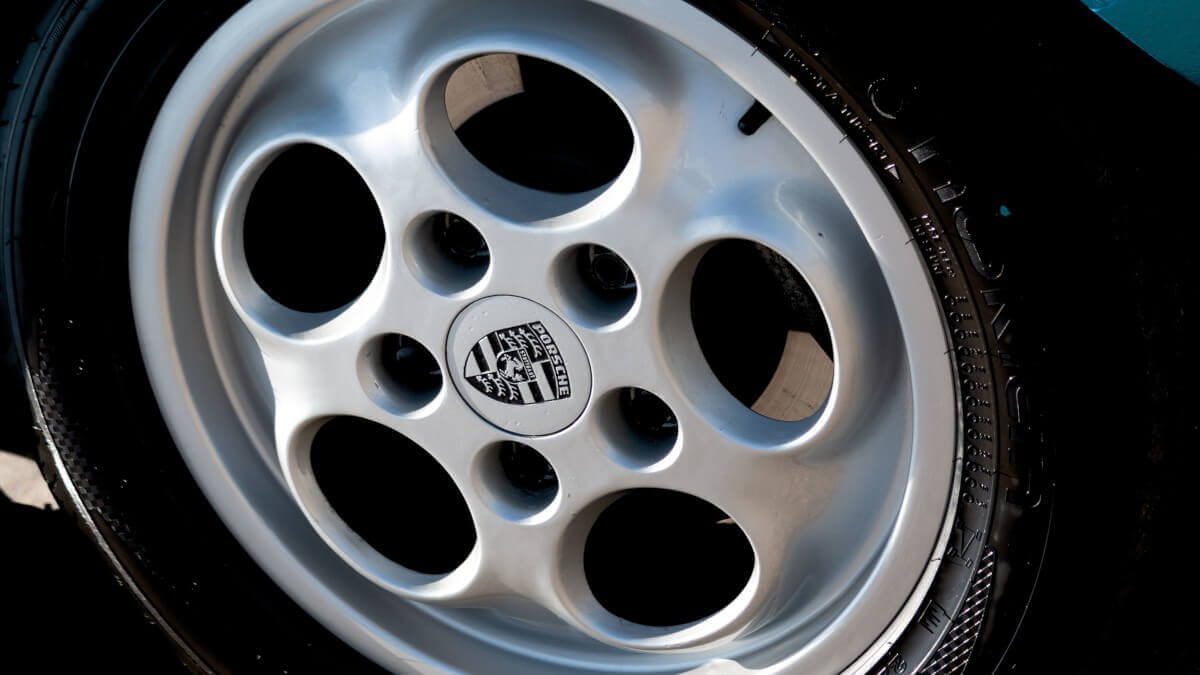 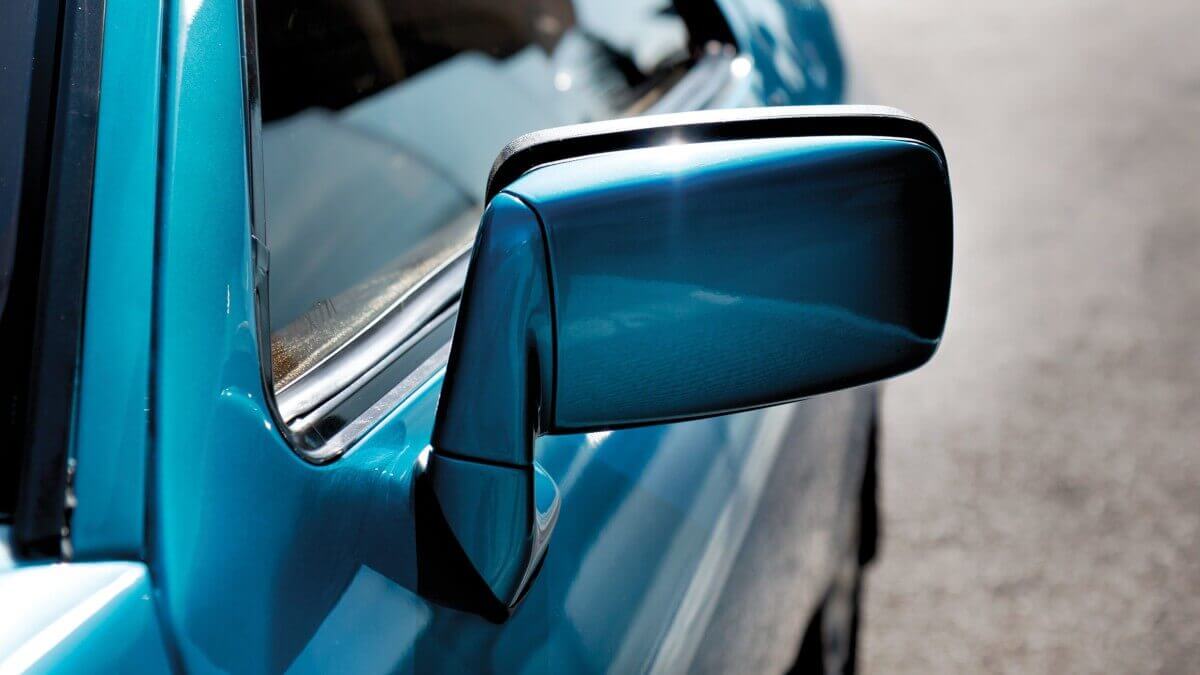 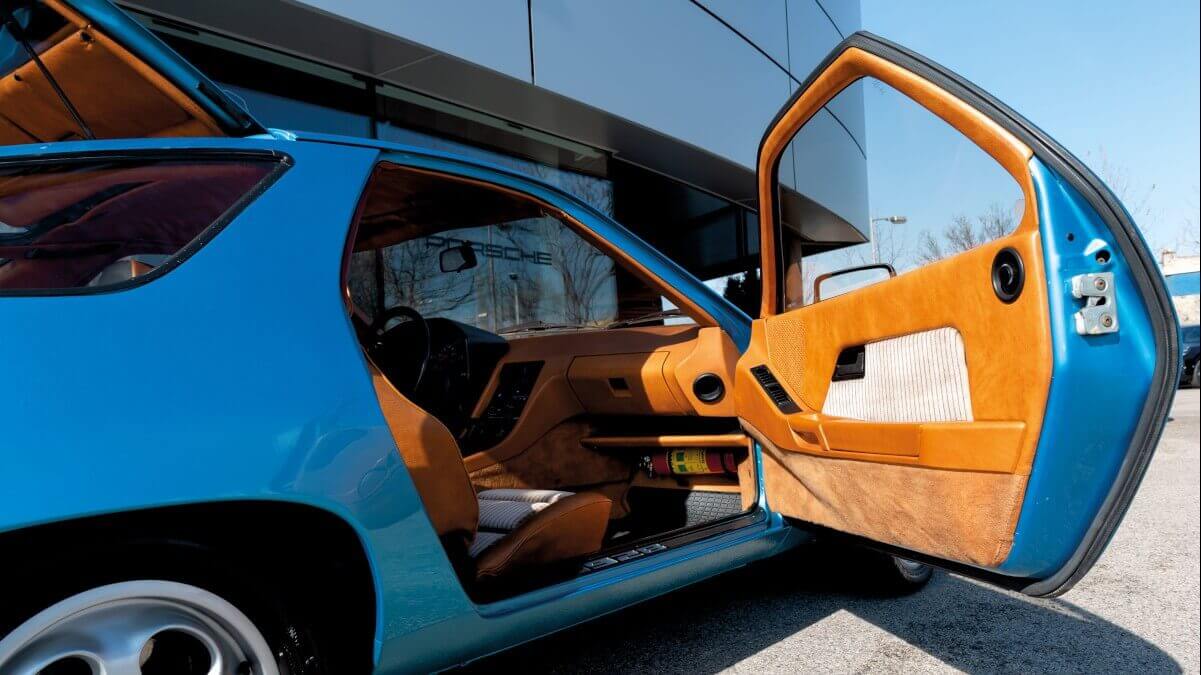 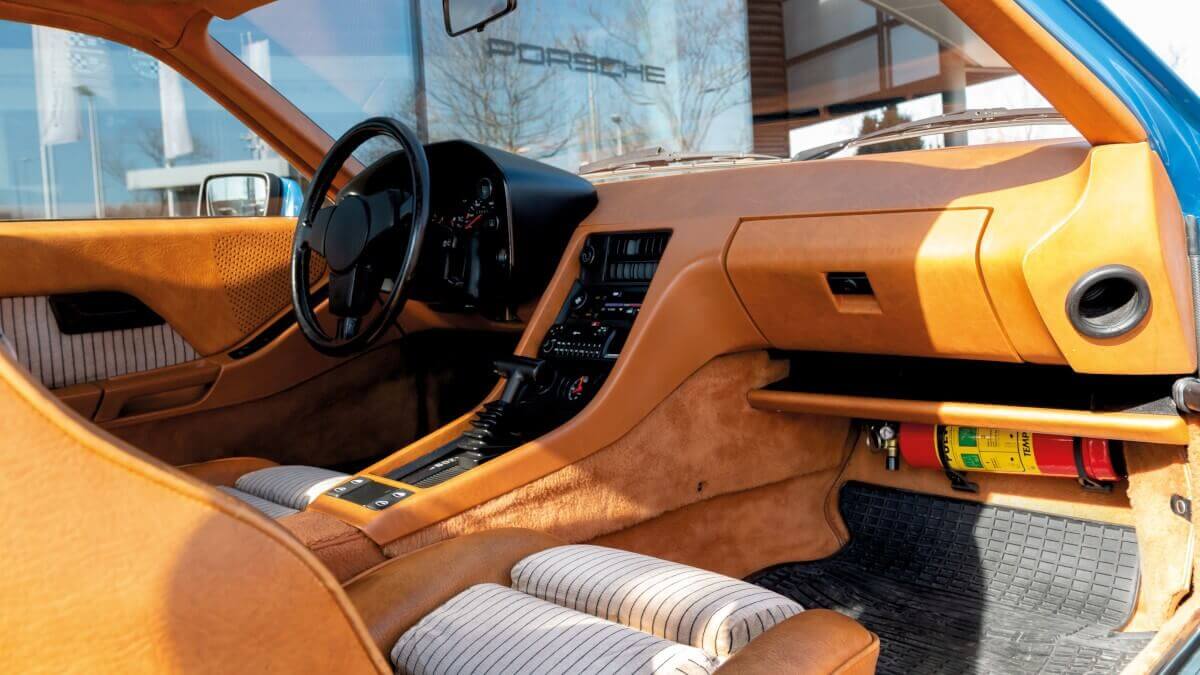 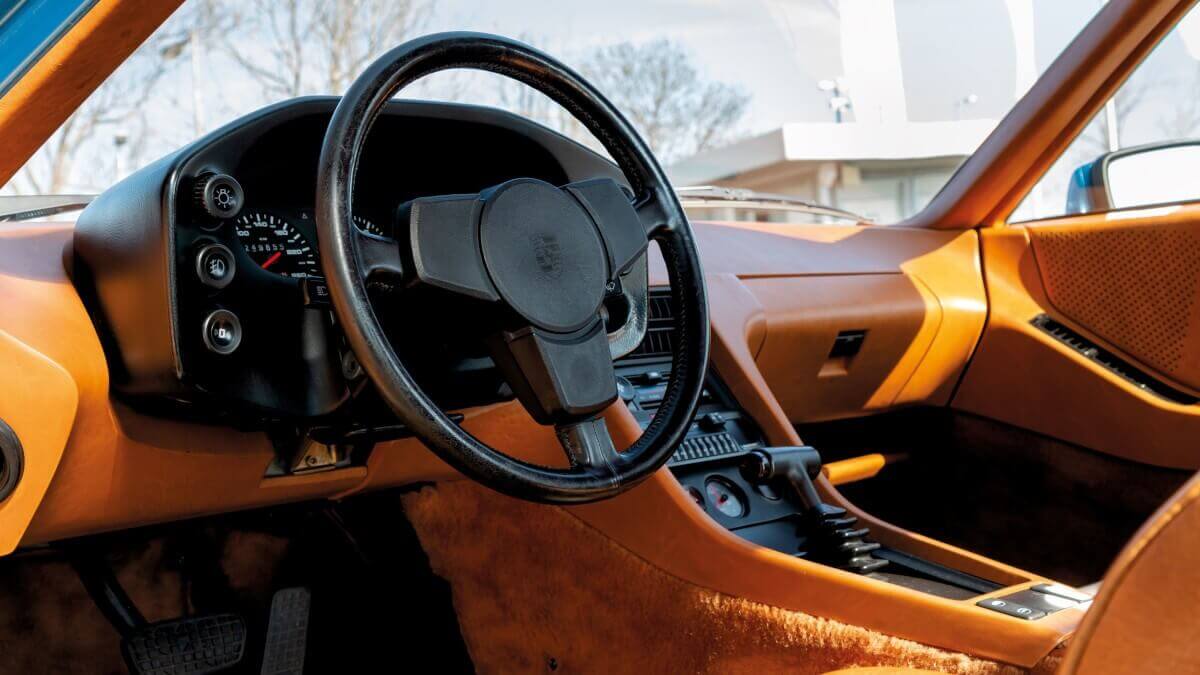 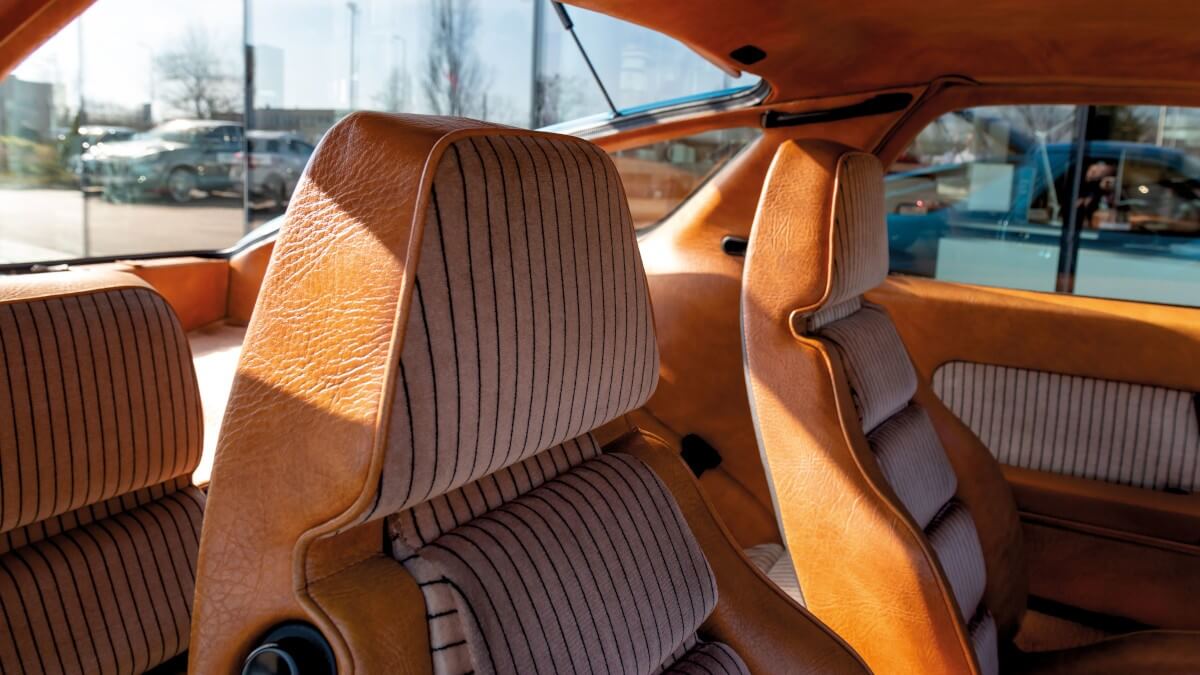 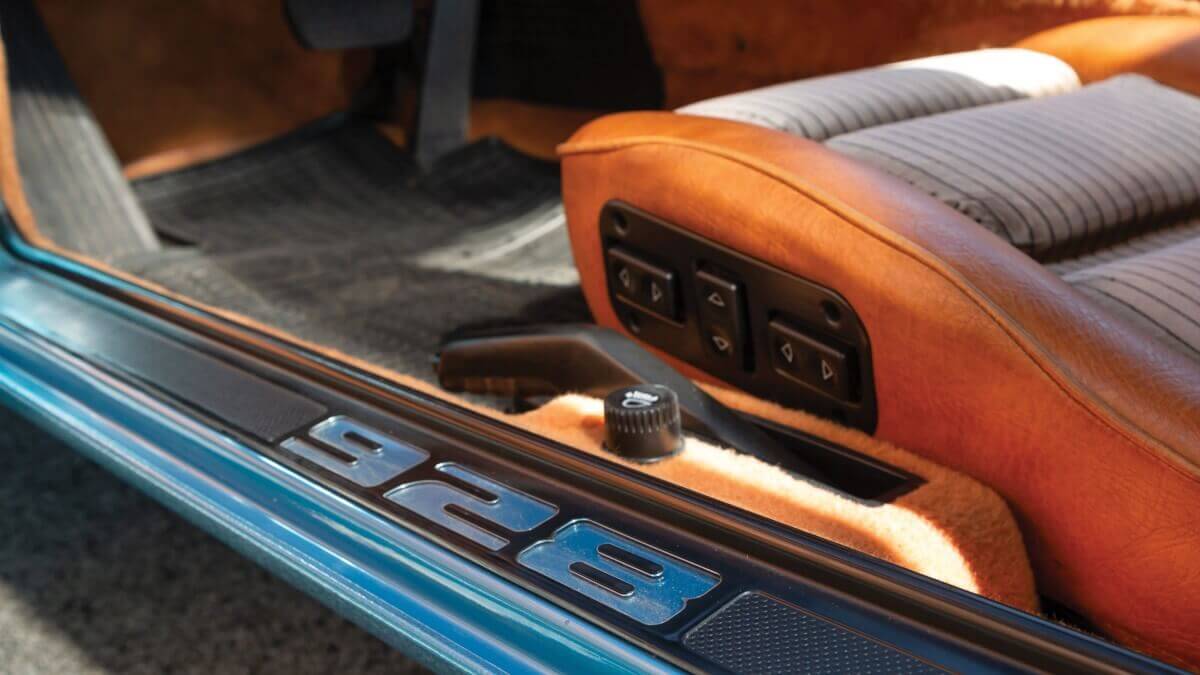 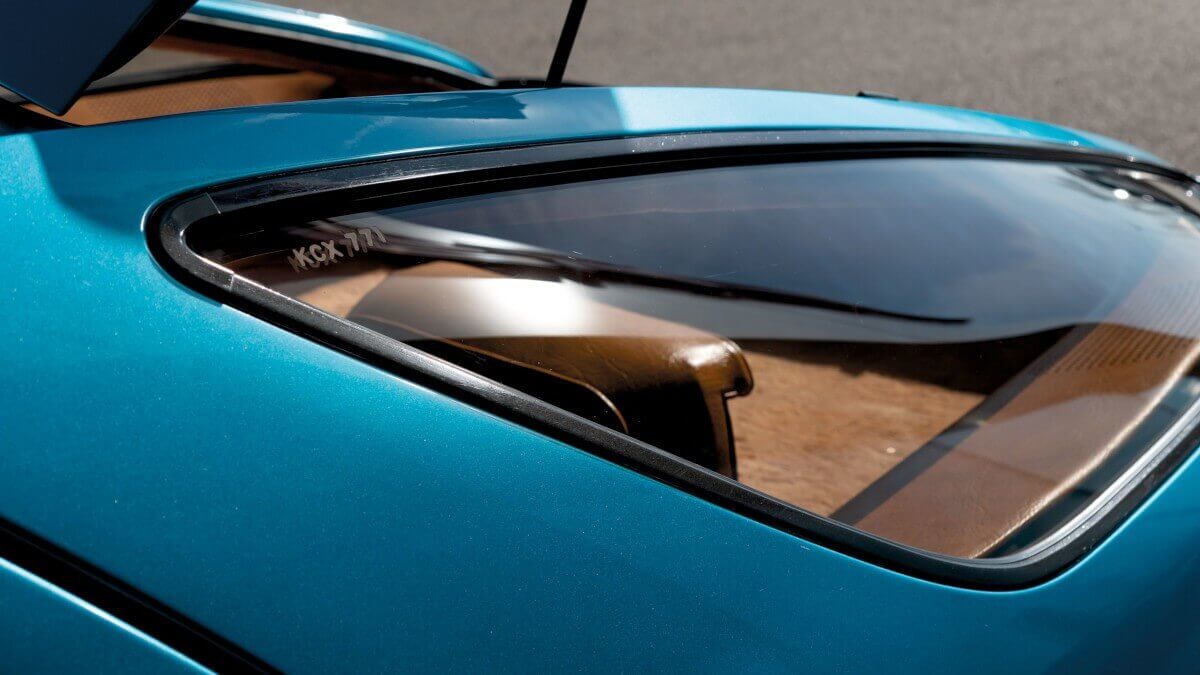 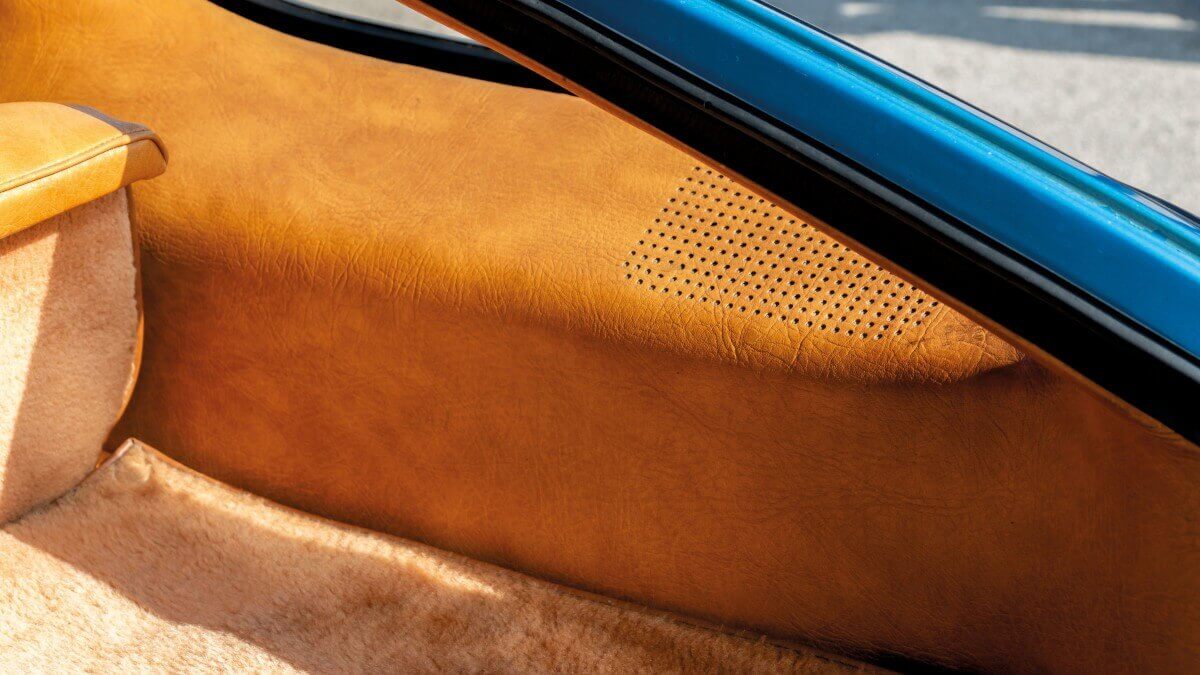 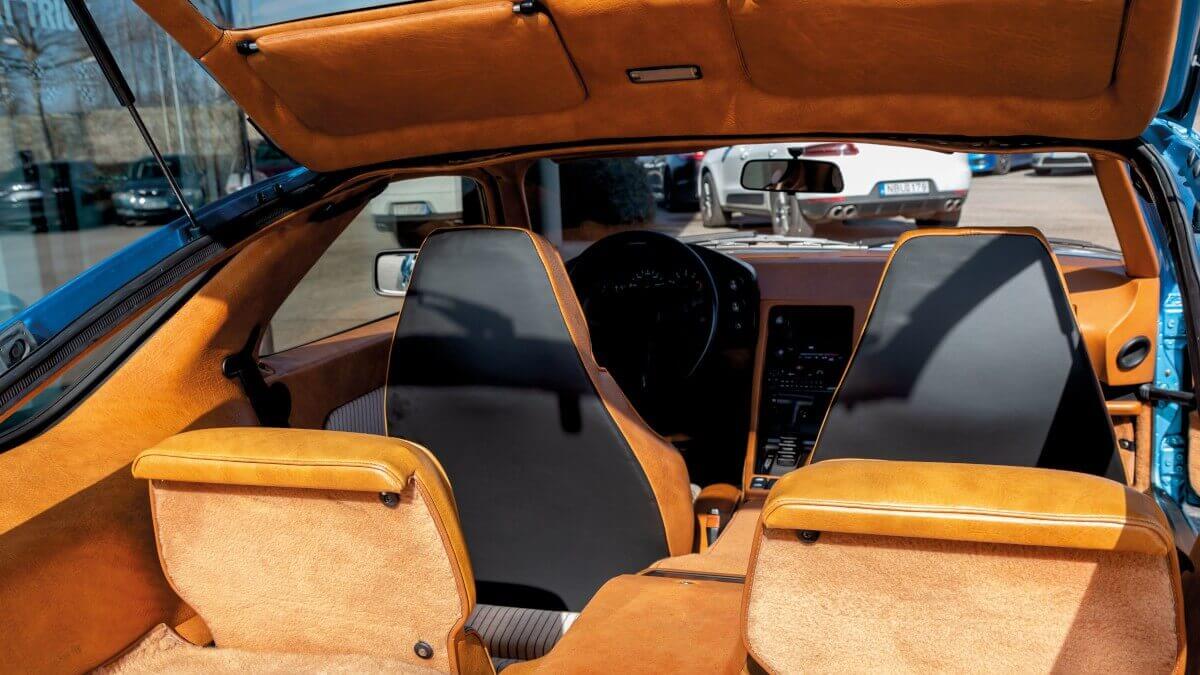 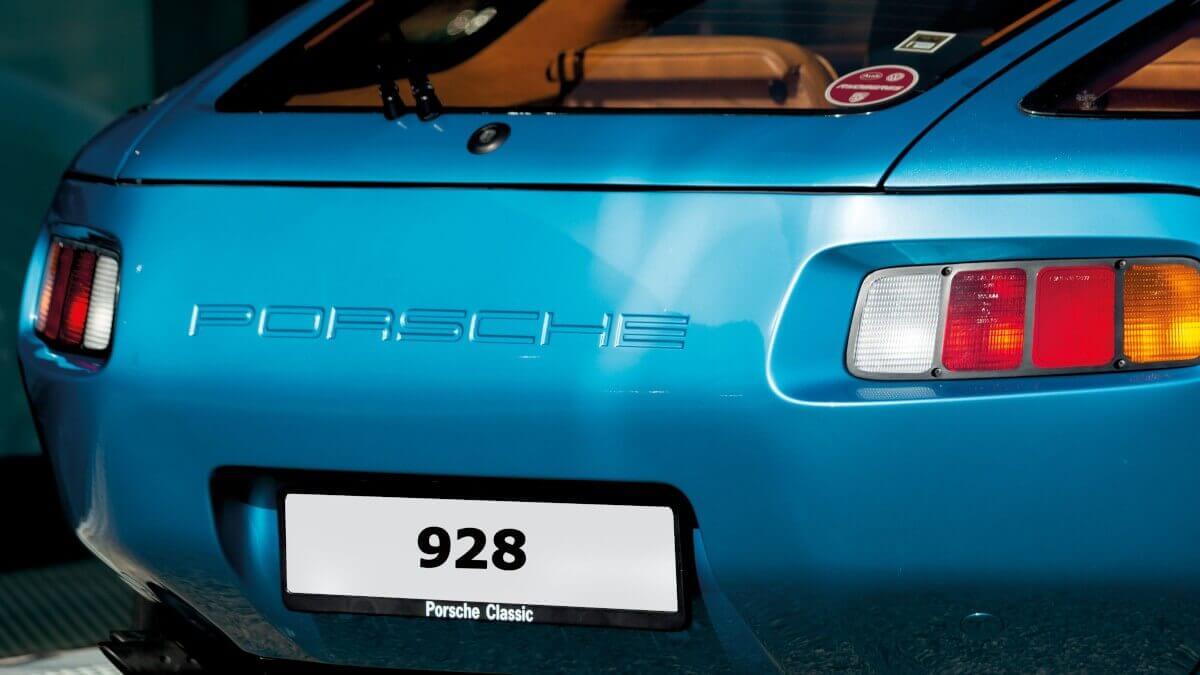 In the design department, Wolfgang Möbius and Harm Lagaay set about designing a stylish new bodywork for this platform. Apart from the requirement to create a real Porsche, the two of them and the rest of the design team didn’t have to adhere to any other specifications. As a result, the car became very different from previous models such as the 356, 911 or 914, with round pop-up headlights integrated at the front, which simply extend forward when switched on. Instead of classic bumpers, the new sports car was given collision-elastic plastic parts painted in body color and integrated flush with the body, with the rear one integrating the entire area around the tail lights. All in all, a timelessly beautiful design was achieved for the Porsche 928, which debuted at the Geneva Motor Show in 1977 and won the prestigious ‘Car of the Year’ award the following year. However, some people still claim today that the air resistance is lower when reversing than when driving forwards. Inside, the 928 offers space for up to four people, although the rear passengers may become familiar with the early dropping roof line. This and the large rear window also necessitated the installation of fold-out sun visors, which are otherwise only found on the windscreen.

Although the 928 was originally intended to replace the 911, this never happened. The main reason for this was the reaction of Porsche customers worldwide, who when these plans where announced provided clarity through sales figures. The actually antiquated 911 suddenly sold extremely well again, while the 928 was considered too heavy and too comfortable for a real sports car. But it was precisely with these attributes that it found its very own clientele, who had wished for such a grand tourer. It even became a good towing vehicle for some customers. In the course of time, more powerful versions followed, such as the 928 S with 300 hp from 4.7 liters capacity (IAA 1979), the 928 S4 with four overhead camshafts, four valves per cylinder and 320 hp from five liters capacity (1987), the 928 GT with 330 hp (1989) and finally the 928 GTS with 5.4 liters and 350 hp (1991). By 1995, a total of 62,410 units of the Porsche 928 had rolled off the production line. RM Sotheby’s is offering the vehicle from our photo gallery in the online auction ‘Open Roads, The European Summer Sale’ from 14 to 21 July. It is a 928 from 1978 in the special color Minerva Blue metallic with a leather interior in cork brown, which was originally used as a demonstration vehicle in the Porsche Center Stockholm. The complete history is recorded on over 180 documents and will be handed over to the new owner in a special folder. RM Sotheby’s hasn’t yet provided any information on the expected hammer price.