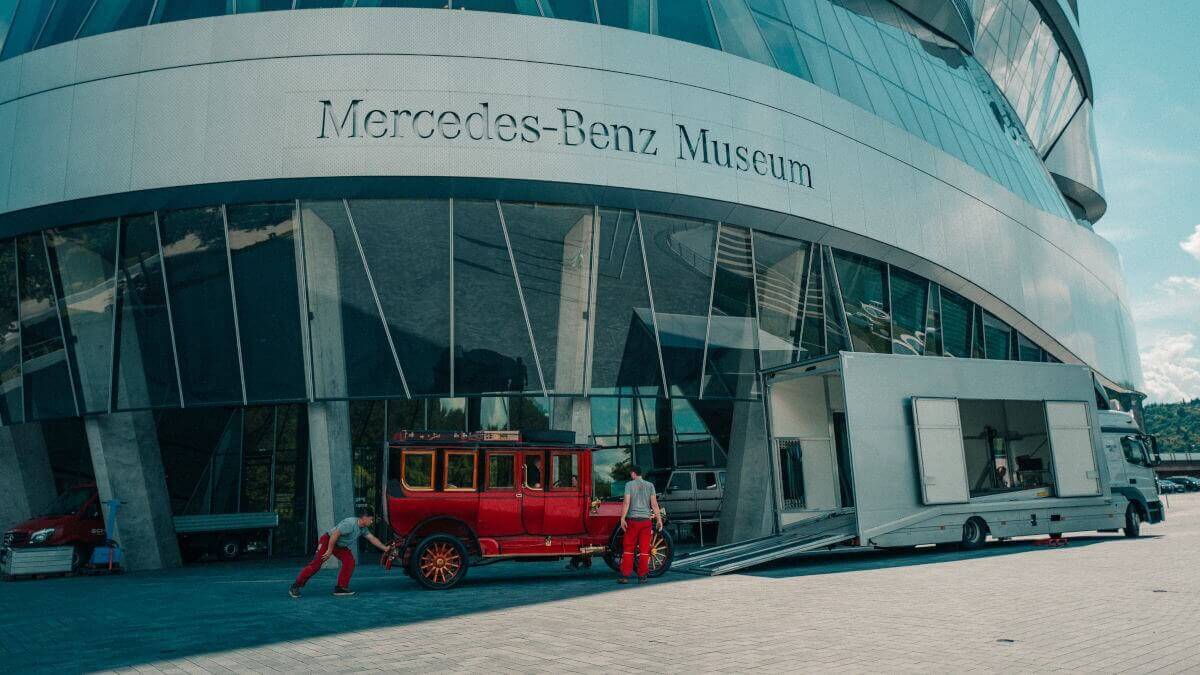 If you, dear reader, ever had the chance to visit the Mercedes-Benz Museum in Stuttgart once (or even several times), then you know that the permanent exhibition there contains around 160 vehicles ranging from the Patent-Motorwagen to trucks and racing cars. Many of them haven’t moved from their places since the inauguration of the museum in 2006, as they are an integral part of the exhibition concept. This concept includes an elevator ride up to the top floor and then a spiral tour through the various eras of the brand’s history, passing through seven so-called ‘Myth’ rooms. Next to them there are also five ‘Collection’ rooms with special exhibitions in a parallel spiral. The second ‘Myth’ room deals with the origins of today’s Mercedes-Benz brand, including the origin of its name. As is well known, Daimler and Benz became Daimler-Benz AG, but the automobiles were given the name Mercedes – and Daimler had already done so way before the merger. The reason for this was the French importer Emil Jellinek, whose favourite daughter bore the name Mercédès. He had this name transferred to car concepts specially ordered by him, which led to registration as a trademark in 1902.

One of the vehicles in the second Myth room is usually a red painted Mercedes-Simplex 60 hp Touring Sedan, built in 1904, which is one of the cars that Emil Jellinek had in his personal fleet. At the end of August this classic car left the museum on a trip, making it the oldest original vehicle that has been taken out of the permanent exhibition so far. However, the Touring Sedan didn’t travel far. It is being used as a special exhibit in an exhibition on the S-Class at the Mercedes-Benz Classic Center in nearby Fellbach. Nevertheless, moving this large vehicle weighing around 2.2 tons out of the museum involved some effort. First of all, the car had to be lifted from its sloping, faceted and shiny black platform, for which a mobile 8-ton mini-crane from the company Scholpp on rubber tracks and a forklift truck were used. These special vehicles reached the level of the Myth 2 room via a 40-ton crane with a transport basket permanently installed in the 42-meter-high atrium of the museum. The transport basket, weighing around 20 tons, is usually stored in the museum’s depot and can be pushed into the atrium by means of air cushions. When attached to the crane system, it has a load capacity of around 20 tons, which is sufficient for all the vehicles on display. 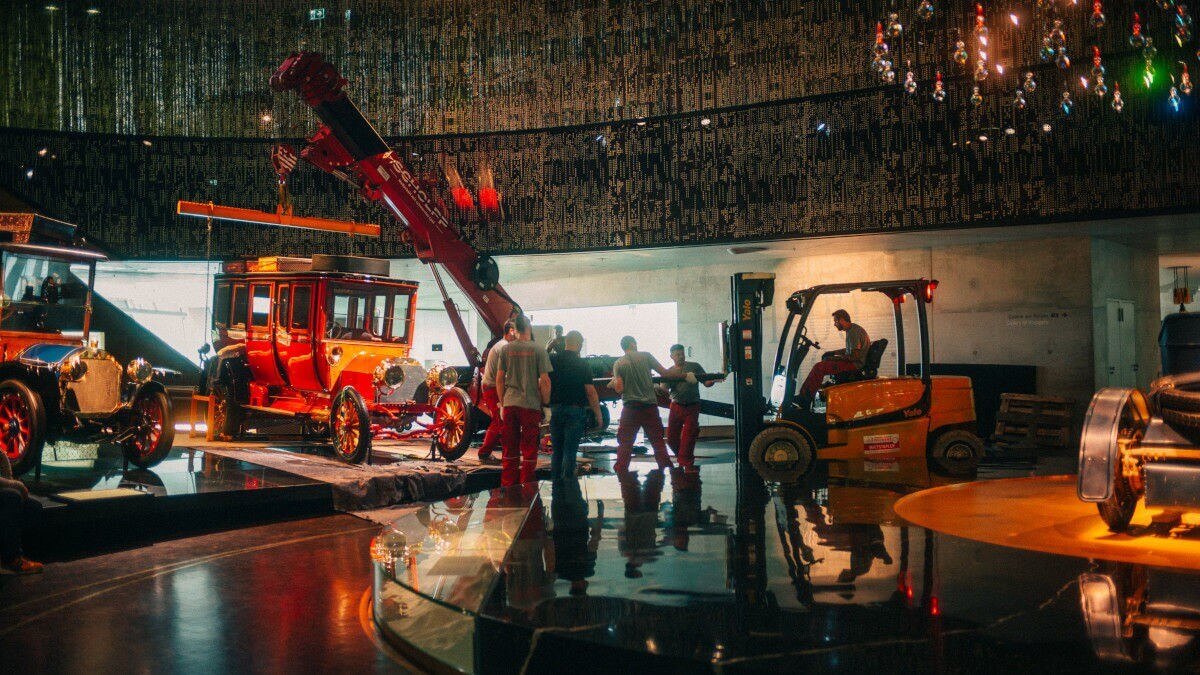 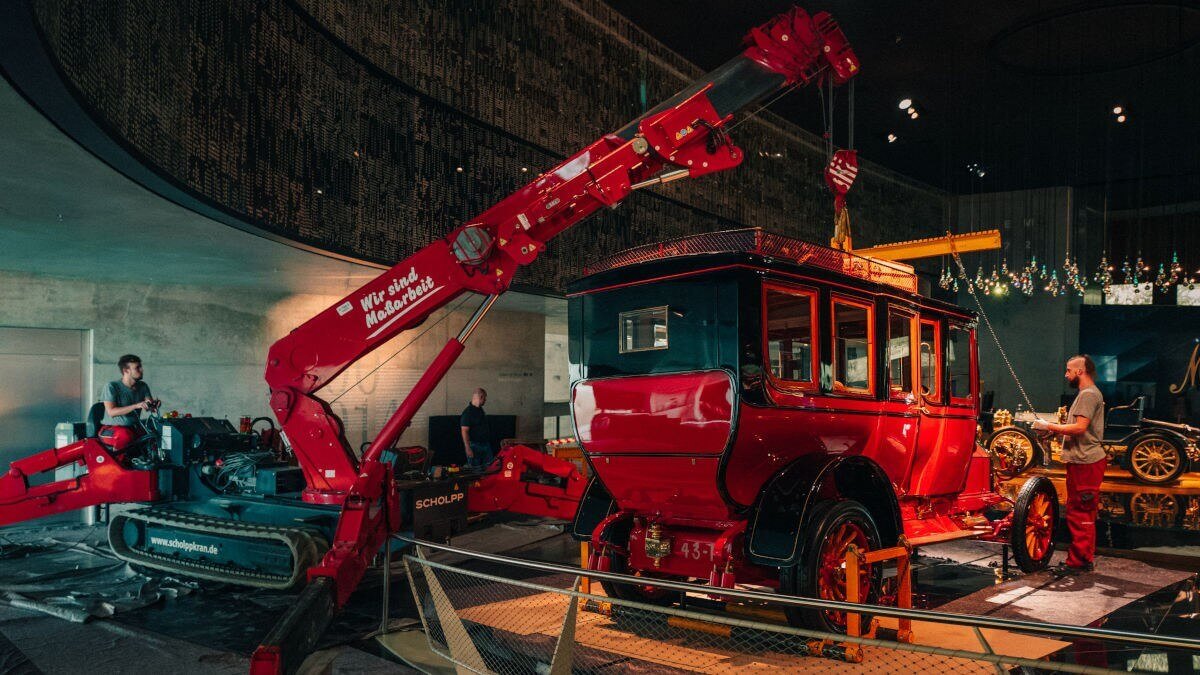 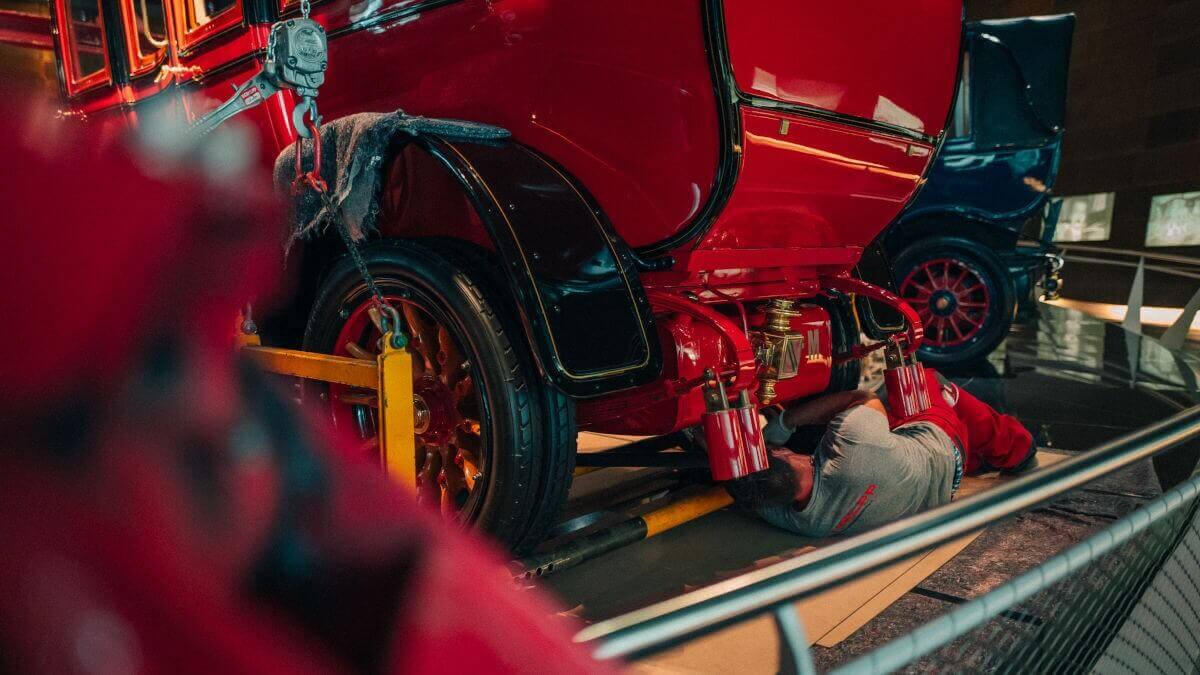 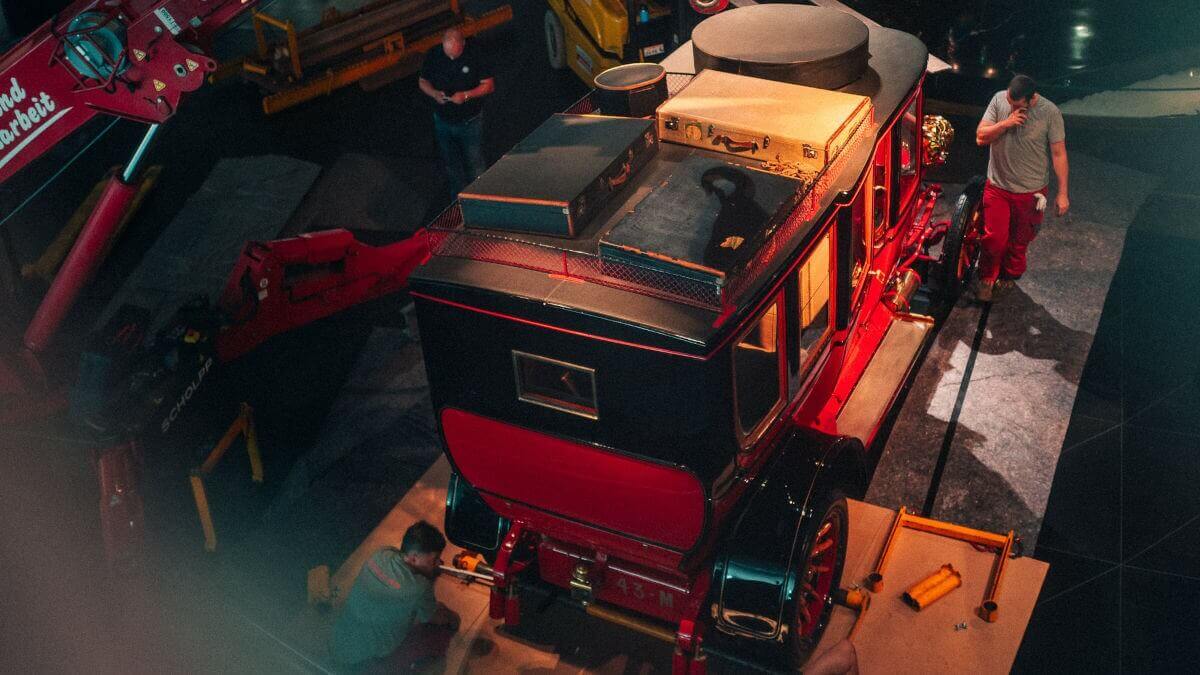 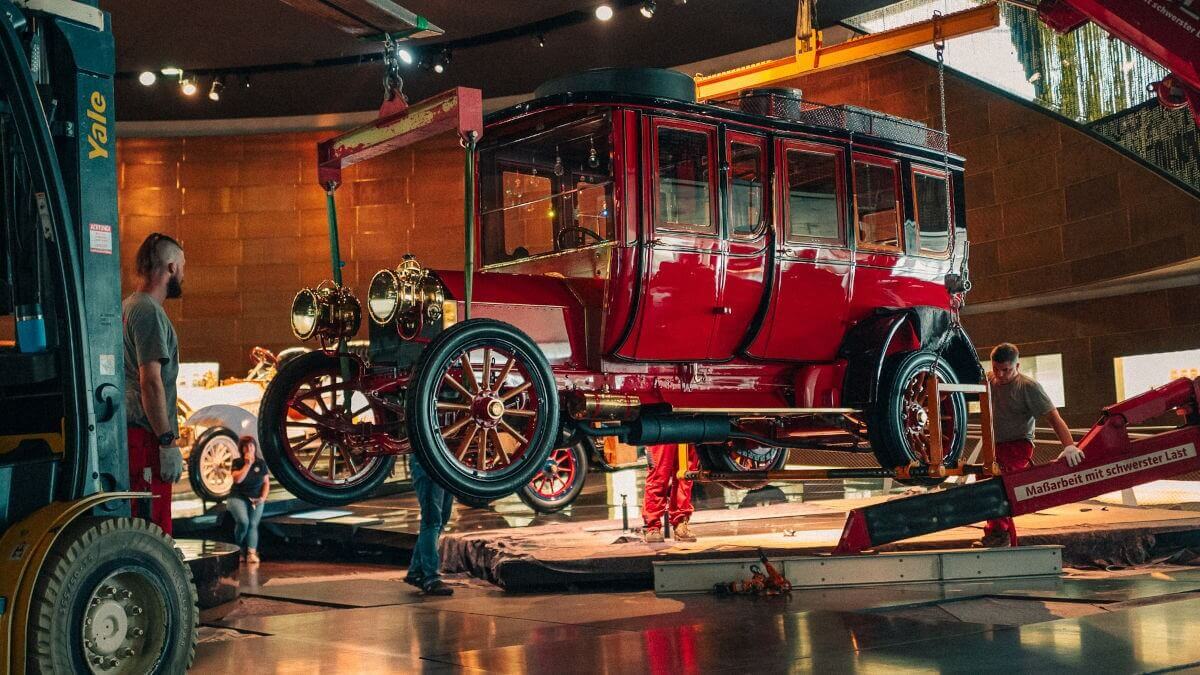 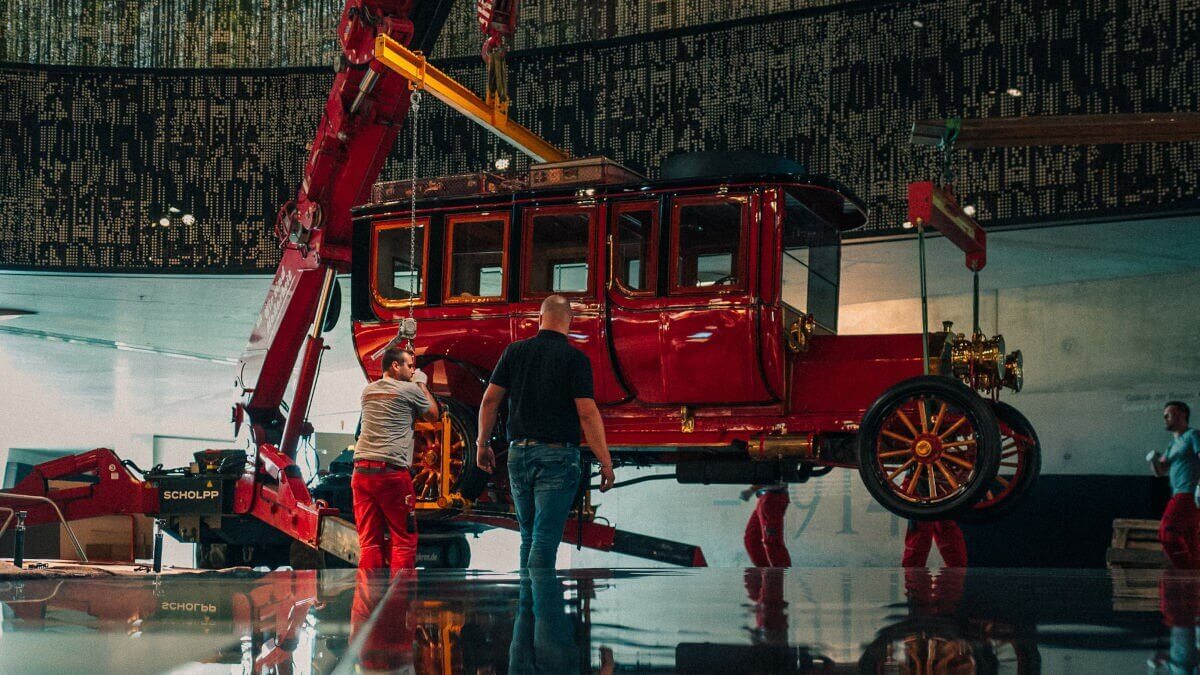 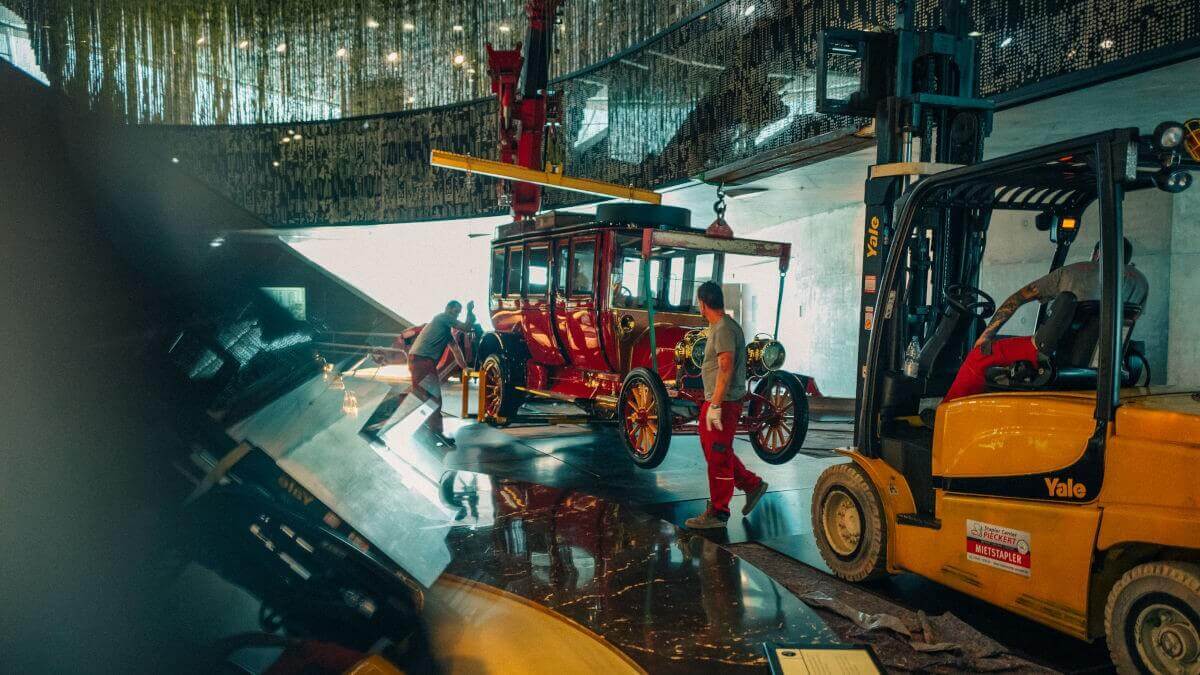 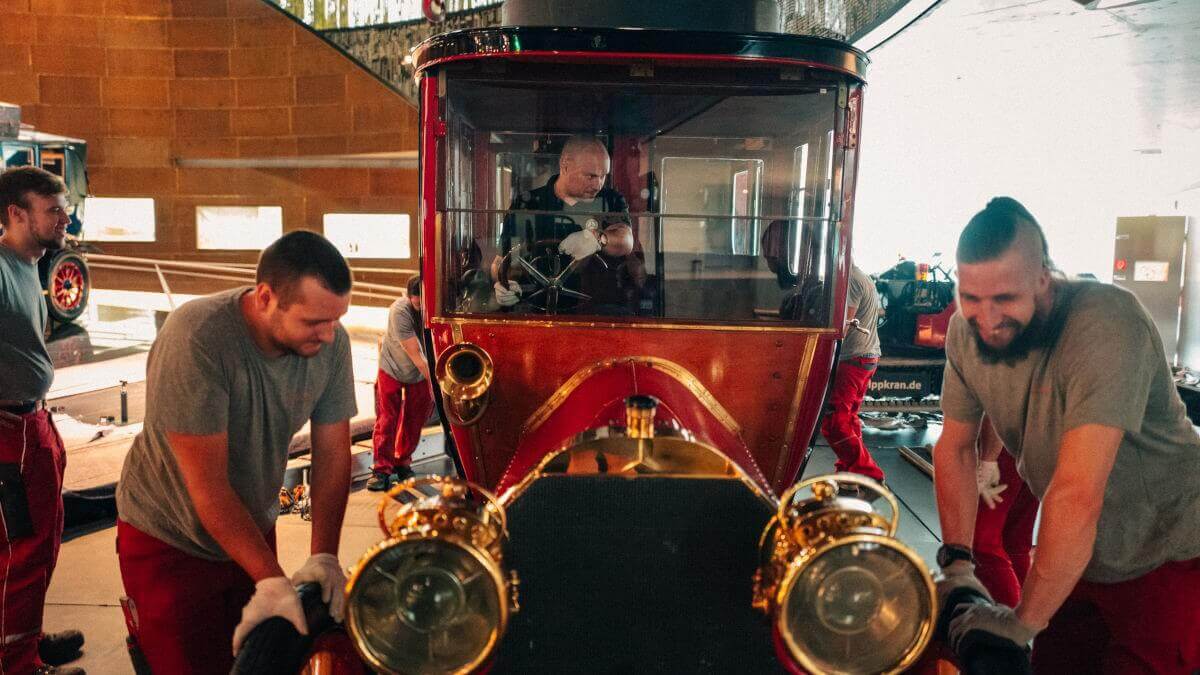 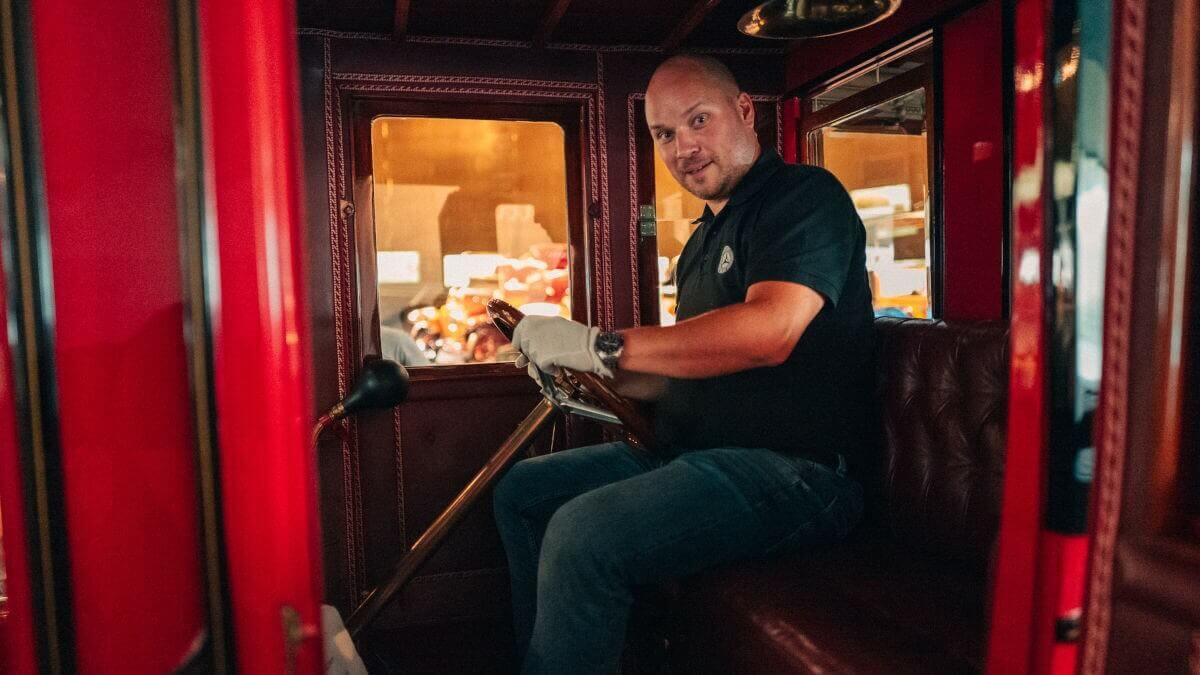 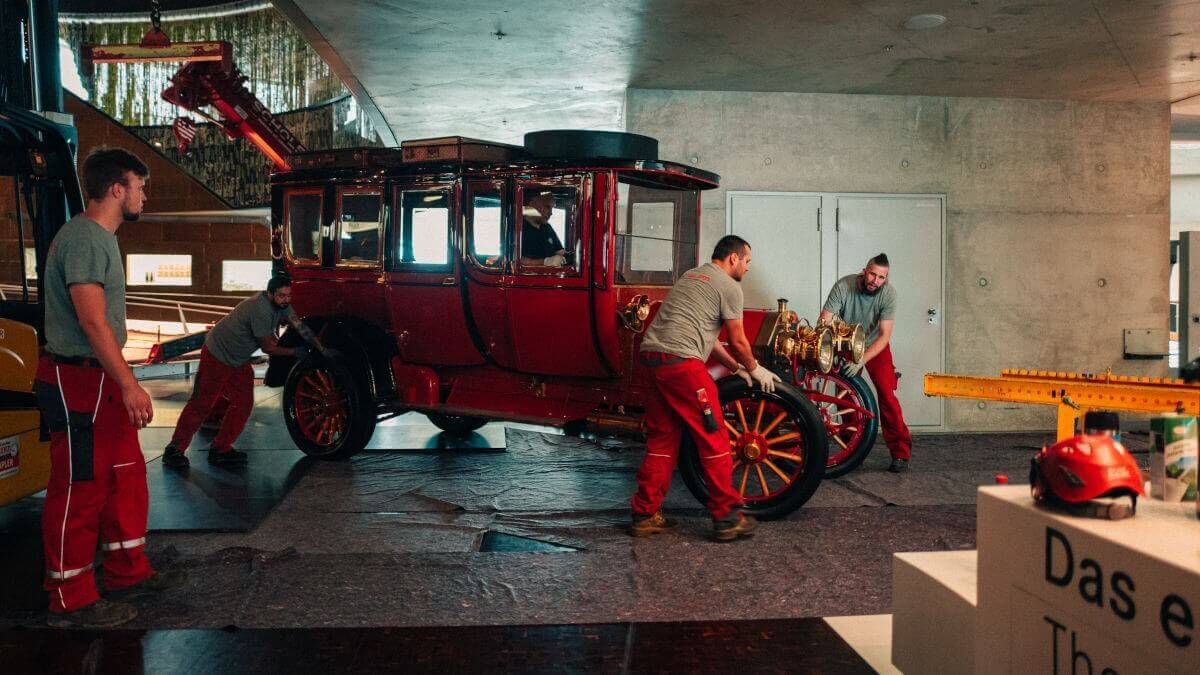 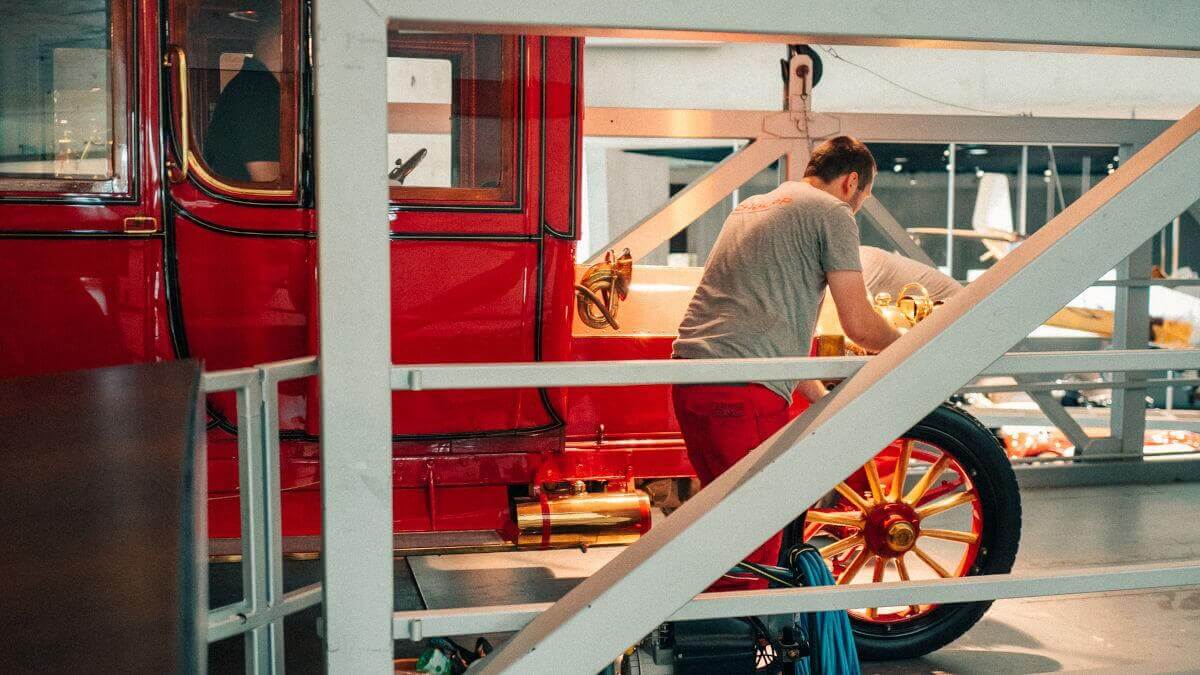 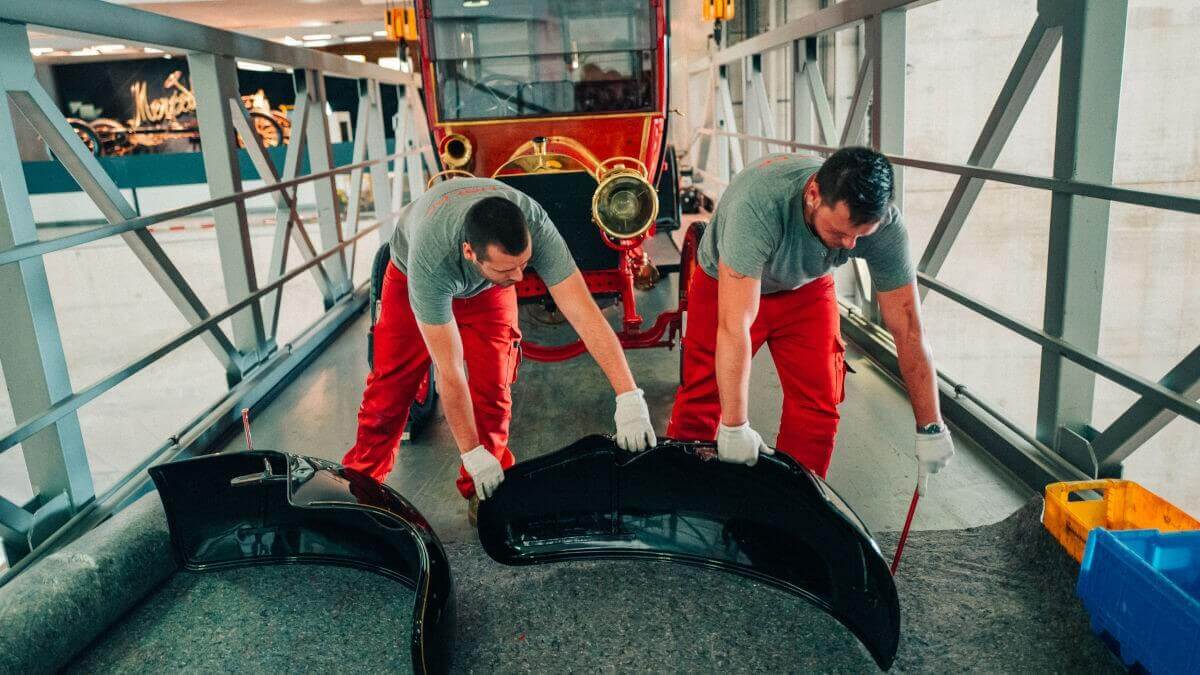 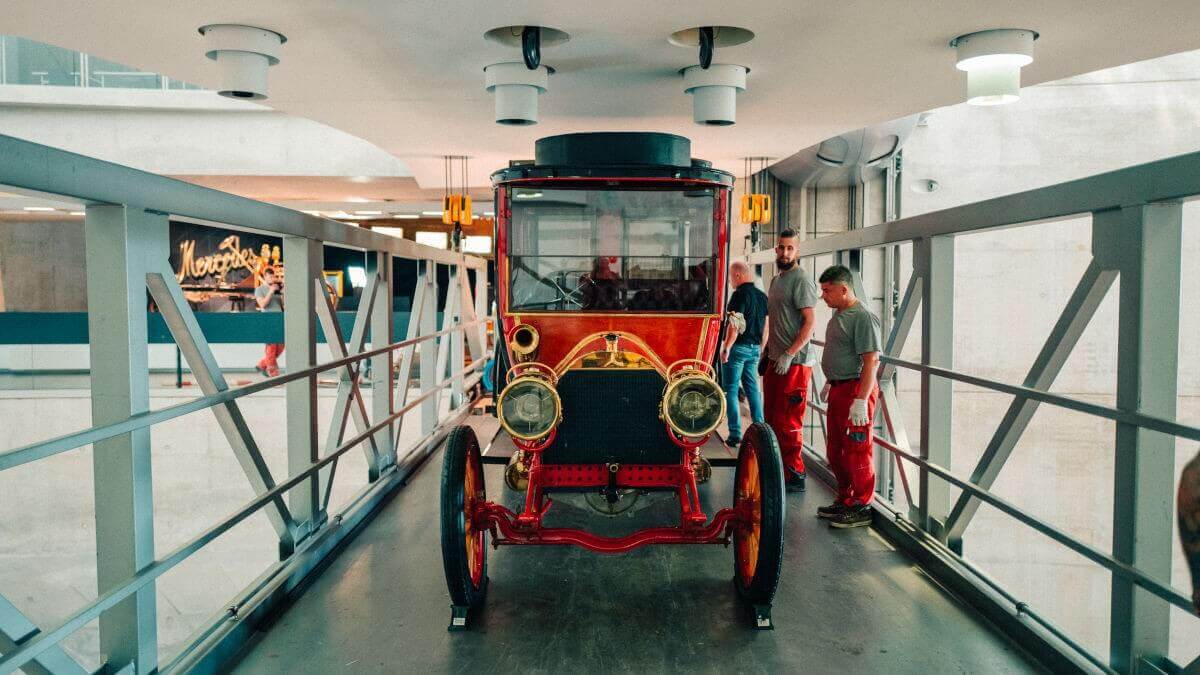 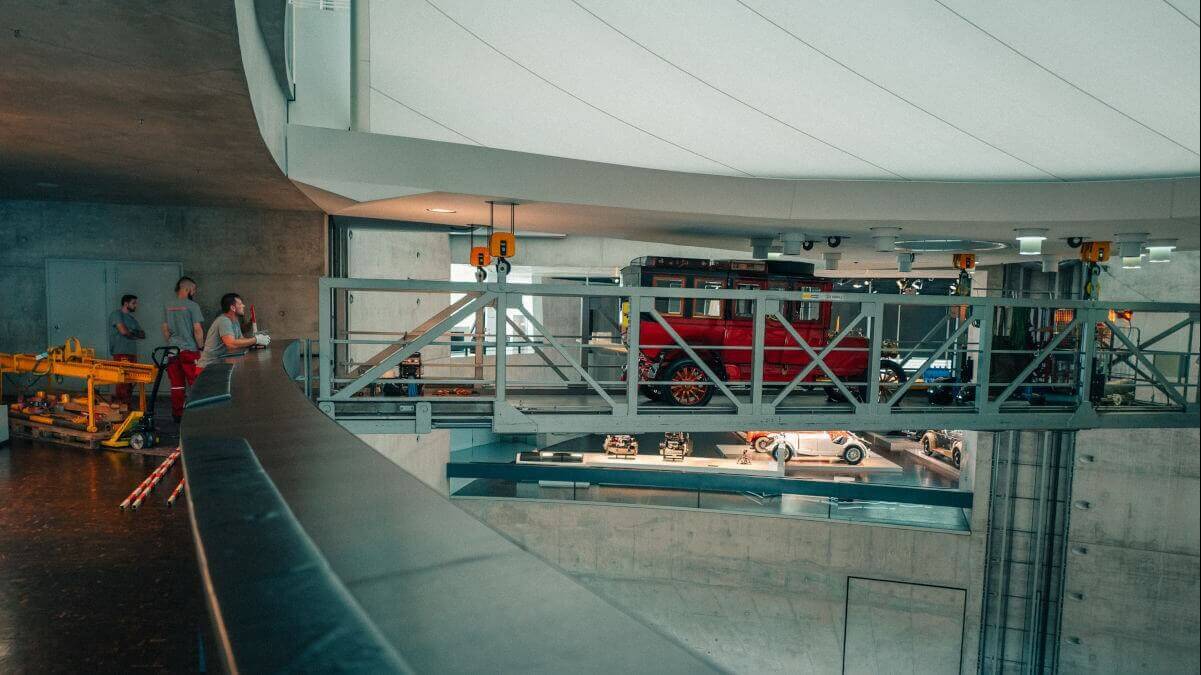 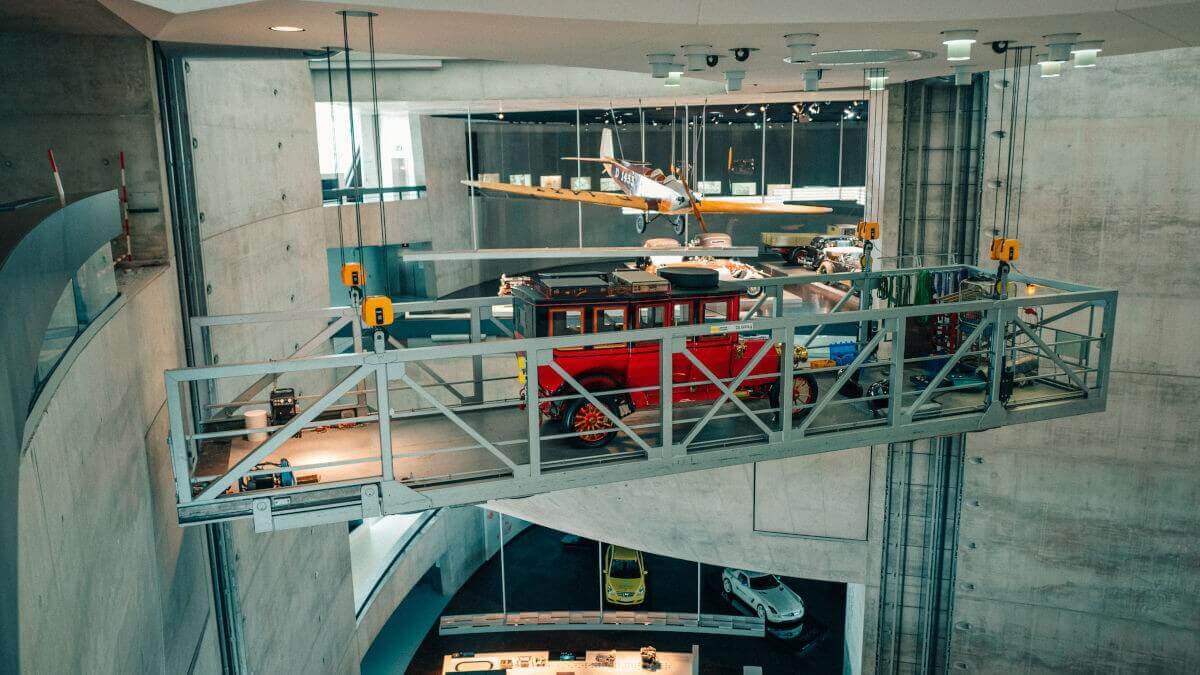 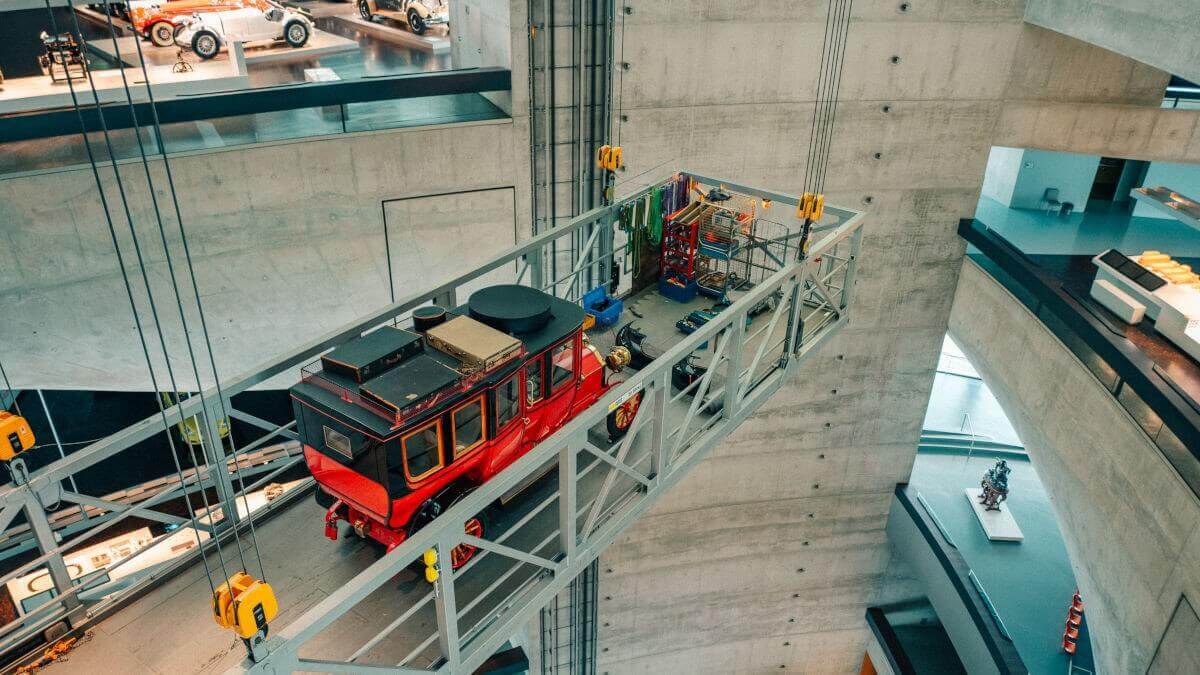 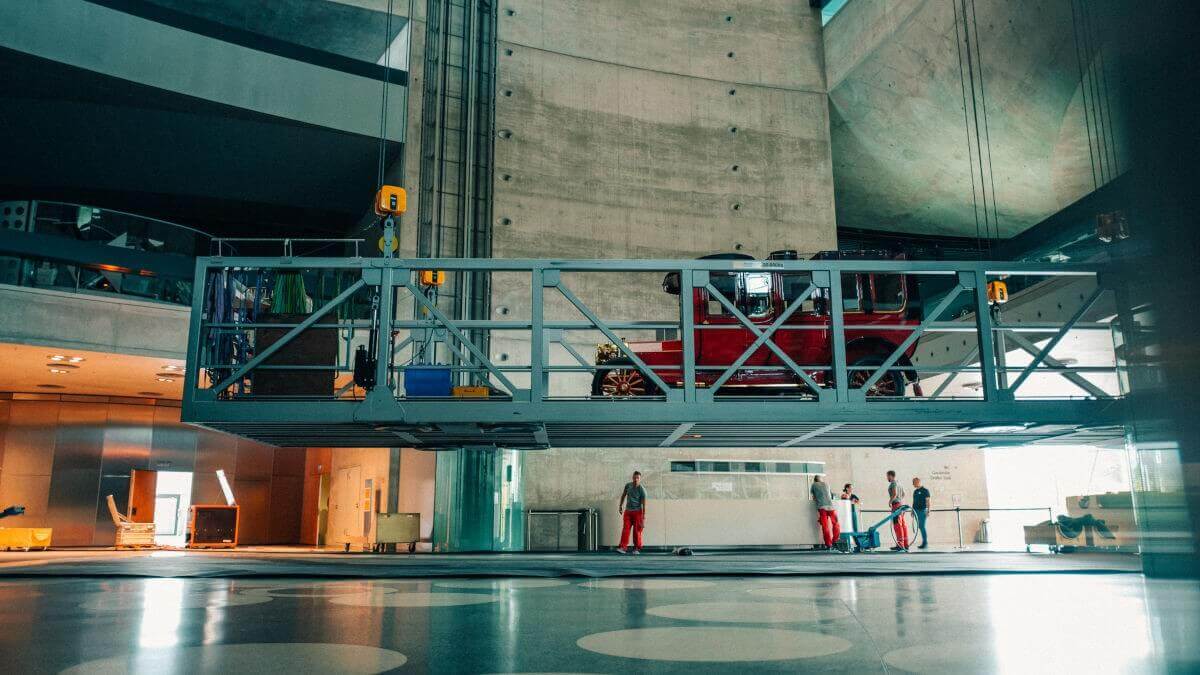 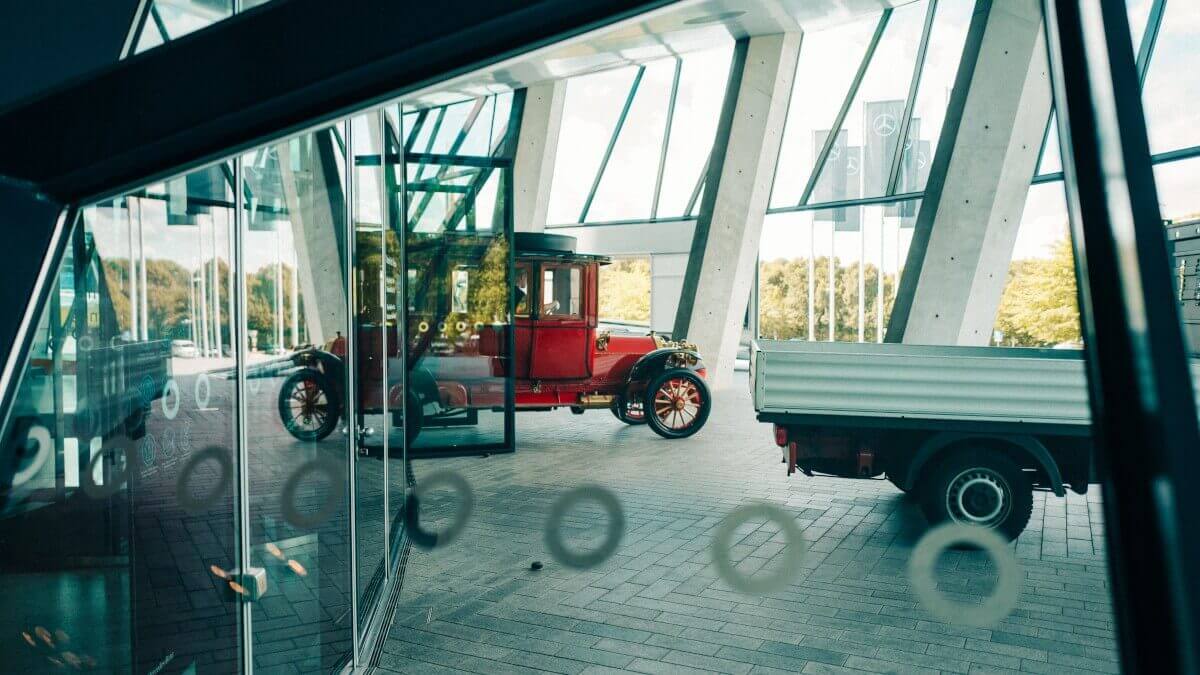 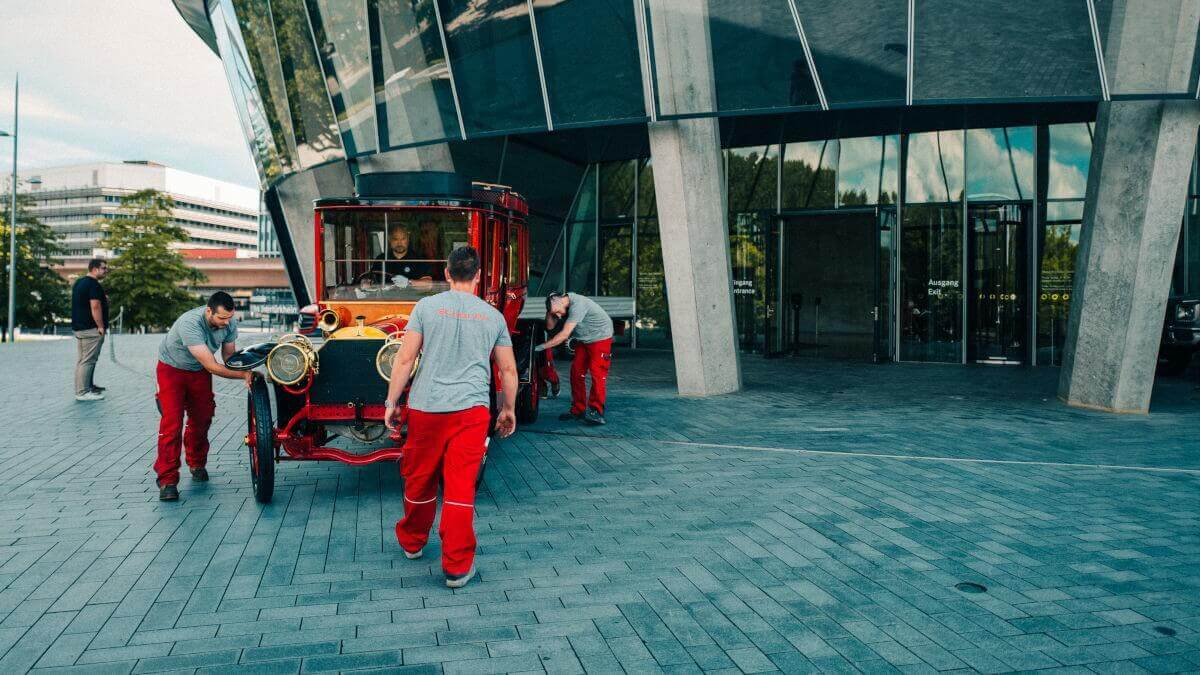 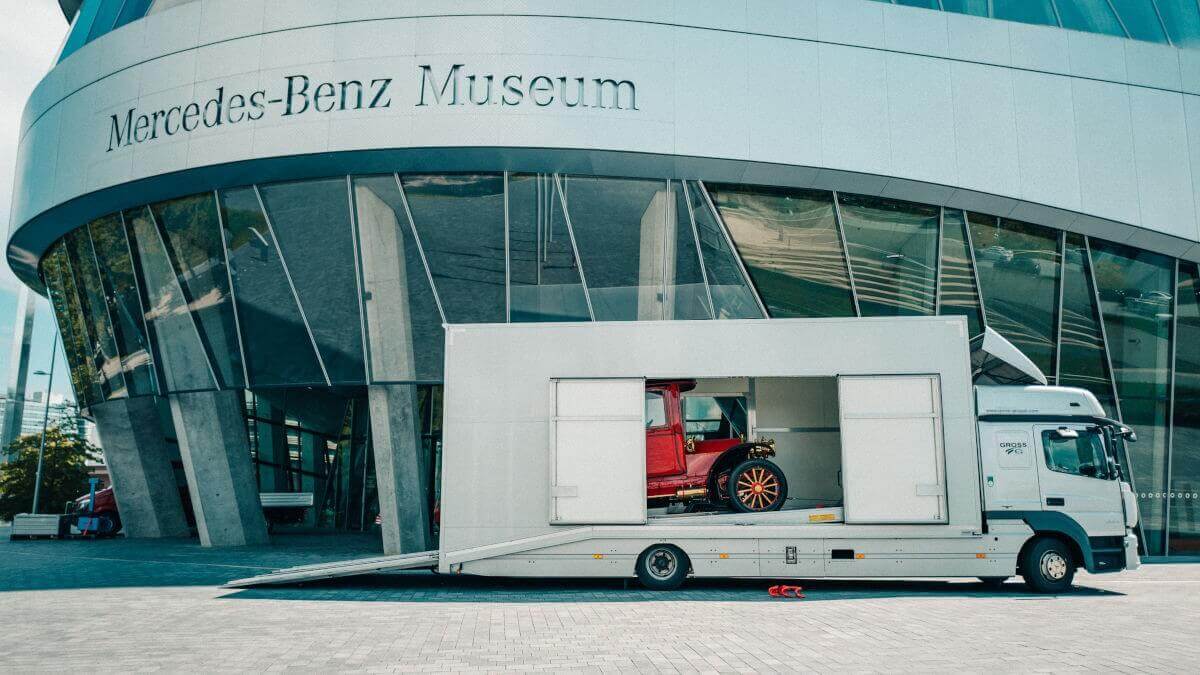 On the platform, four steel pick-up points ensure that the Touring Sedan stands securely, without at the same time putting a strain on the surface of the platform. These now had to be released by hand without the vehicle moving. An exactly thought out schedule was thus necessary, in order to damage neither the classic car, nor the exhibition surface in any form. Therefore the projecting front fenders of the vehicle had to be removed. While the front axle is lifted at the front by belts on the forklift fork, the rear wheels receive a special frame made of steel brackets so that they can be lifted with the mini-crane. At times, the Touring Sedan floated freely in the Myth room before it was carefully dropped down to the floor about five meters further to the side. While the preparation in the depot, in the Myth 2 room and on the vehicle took around eight hours, only around ten minutes passed for the pure lifting process.

Once the air pressure in the old tires had been increased, the classic car could be pushed into the transport basket with muscle power and lowered into the atrium within five minutes. From there, it was pushed through the museum’s main entrance to the forecourt and then into a waiting closed car transporter. This transported the Mercedes-Simplex to the Mercedes-Benz Classic Center in Fellbach, where the car was thoroughly checked by the in-house experts before the start of the special exhibition. The Simplex will not return to its original place in the permanent exhibition until early 2021.