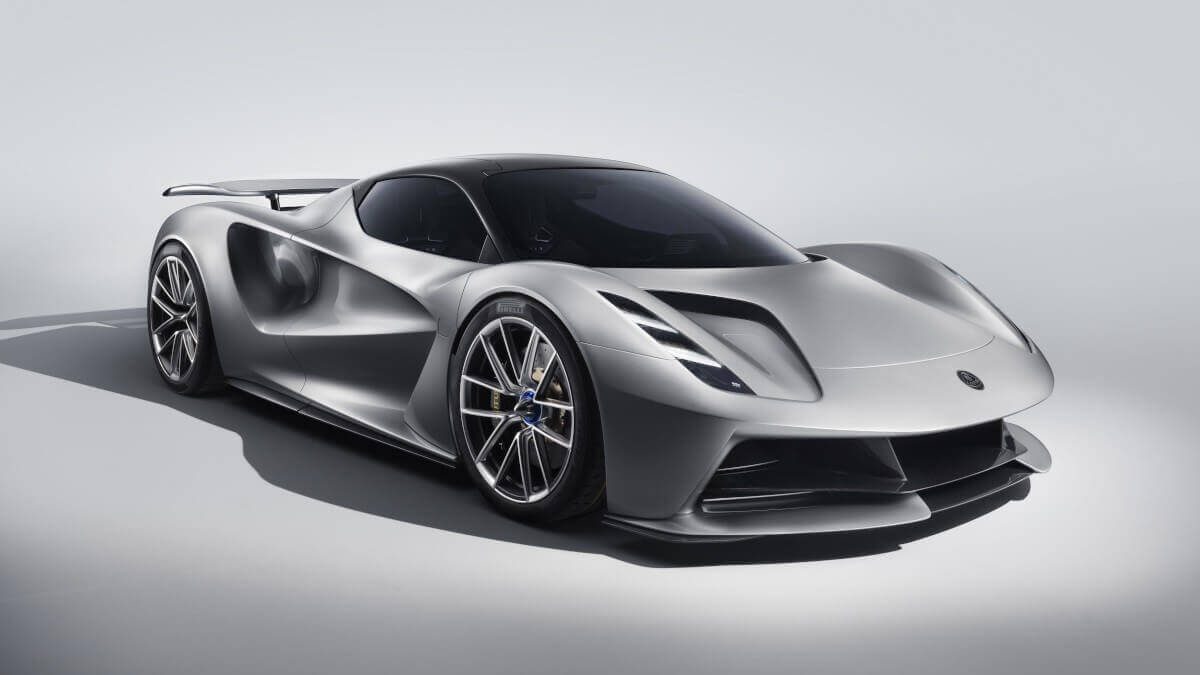 After all, the iconic British sports car brand Lotus let its customers and fans wait for eight long years until the premiere of a really new model was celebrated again, if we disregard the 3-Eleven, which was produced in a limited edition and presented at the IAA in 2015. Now the Evija was ceremonially presented in London and suddenly everything is different in the house of the traditional manufacturer. While Lotus was previously known for its lightweight construction in the spirit of the brand’s founder, Colin Chapman, which made it possible for the sports cars to be among the front runners even with small engines, the Evija is now being used in the hypercar segment. In the future, the competitors will no longer be called Opel Speedster or Renault Sport Spider, but Koenigsegg or Bugatti. Or should we say Rimac? Just like  the Croatian supercar, the Evija is purely electric.

For Lotus, the presentation of the Evija is a departure into a new era as an automobile manufacturer. Since May 2017, the Chinese automobile group Geely, which also owns the Swedish brand Volvo, is the majority owner of Lotus. With the Evija, the influence and know-how from the Middle Kingdom is now noticeable for the first time. The result is a sports car with really impressive performance data, except for one value, but more about that later. The drive of the Evija consists of four separate electric motors with 500 hp each, whereby each one drives a wheel for itself. The total power of the all-wheel drive sports car is consequently 2,000 hp. This makes the new Lotus the most powerful production car in the world at present, just ahead of the Rimac C_Two, which follows with 1,914 hp in the rankings. The development department in Hethel, the brand’s headquarters, is particularly proud of the efficiency of the engines. “With our Evija, we have an extremely efficient electrical power package that brings power to the road in a previously unrealised form. Battery, electric motors and power transmission achieve an efficiency of 98 percent and thus set new standards,” explained Matt Windle, head of development, at the presentation of the car in London.

The energy is stored in a 200 kWh lithium-ion battery pack that was developed jointly with Williams Advanced Engineering and is located right behind the seats. This gives Lotus the feeling of a mid-engined car in the weight distribution and thus also in the handling of this hypercar. The energy dispenser can be seen from the outside through a glass cover. As already briefly mentioned, the performance of the Evija is almost unrivalled. The 2,000 hp are flanked by a maximum torque of 1,700 newtonmeters, which are available right from the start as typical with electric motors. This results in acceleration values of less than three seconds from 0 to 100 kph (62 mph) and less than nine seconds – not to 200 kph (124 mph) as you might expect, but the Evija reaches 300 kph (186 mph) in that time. All, of course, claimed factory specifications at the presentation, as nobody really tested the new hypercar so far.

While the concept of the electric drive ensures the impressive torque and acceleration values, it is also responsible for the only disappointment on the data sheet. Lotus mentions a topspeed of 340 kph (211 mph). That’s not a bad value, but ir’s less convincing compared to the petrol-driven competitors from France and Sweden. Koenigsegg already reached more than 100 kph more with the Agera RS and also Bugatti has a clear ‘4’ in front of the topspeed. Before now some readers raise their warning finger, we gladly admit that the topspeed is rarely really achieved by any customer. Even the 340 kph of the Evija might be only experienced with a few customers at all. Especially not in its home country, where a strict speed limit of 112 kph (70 mph) on the motorways are a big barrier for anyone in a speed rush. 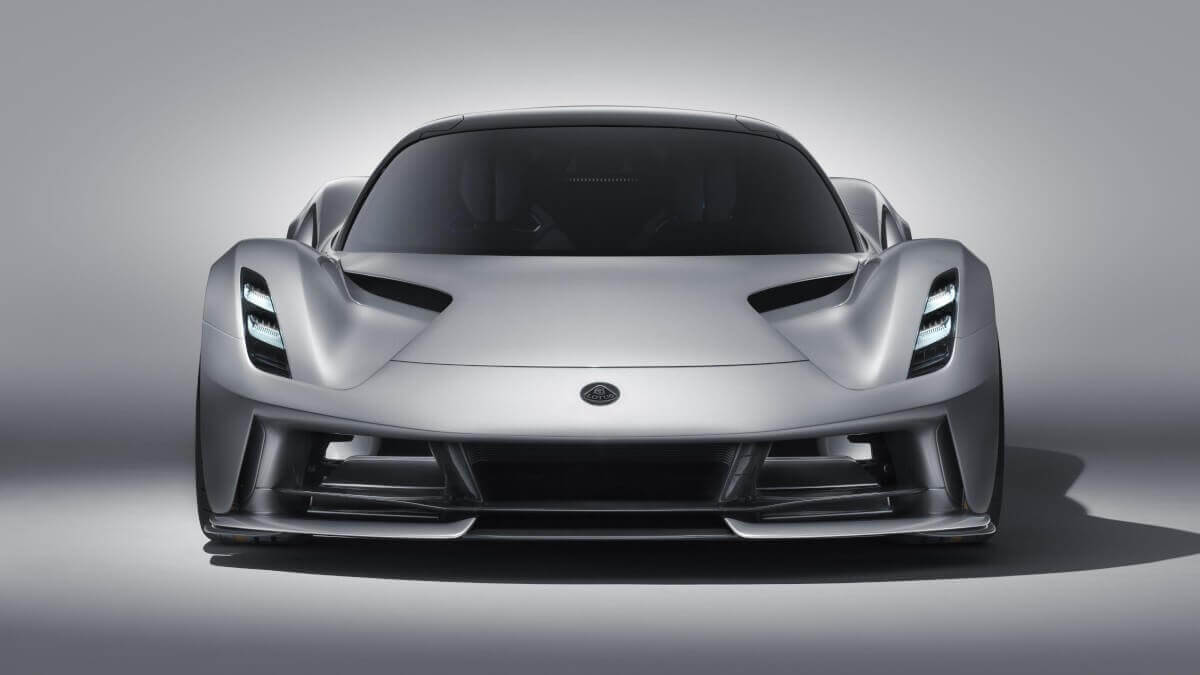 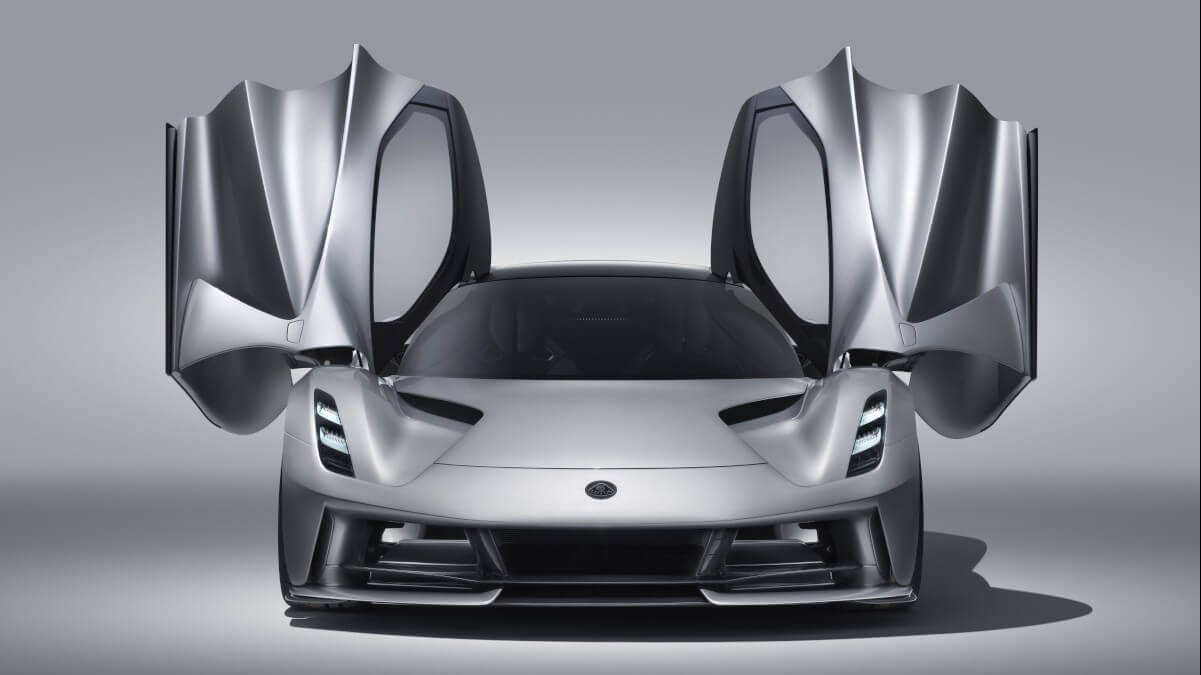 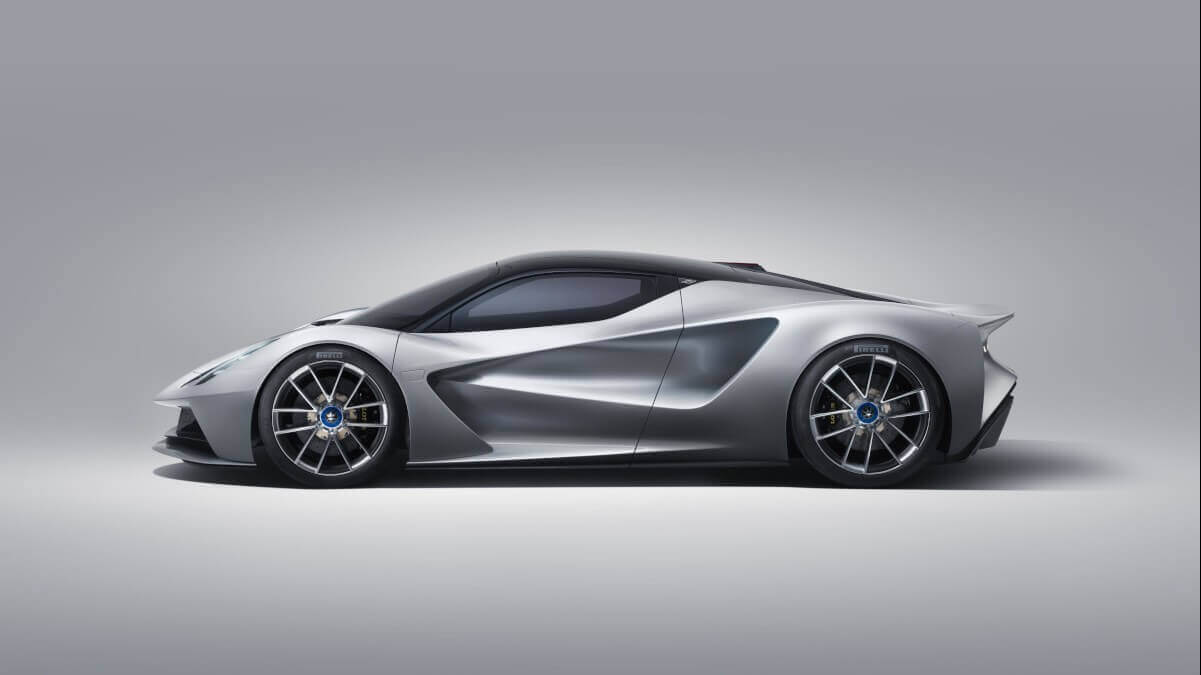 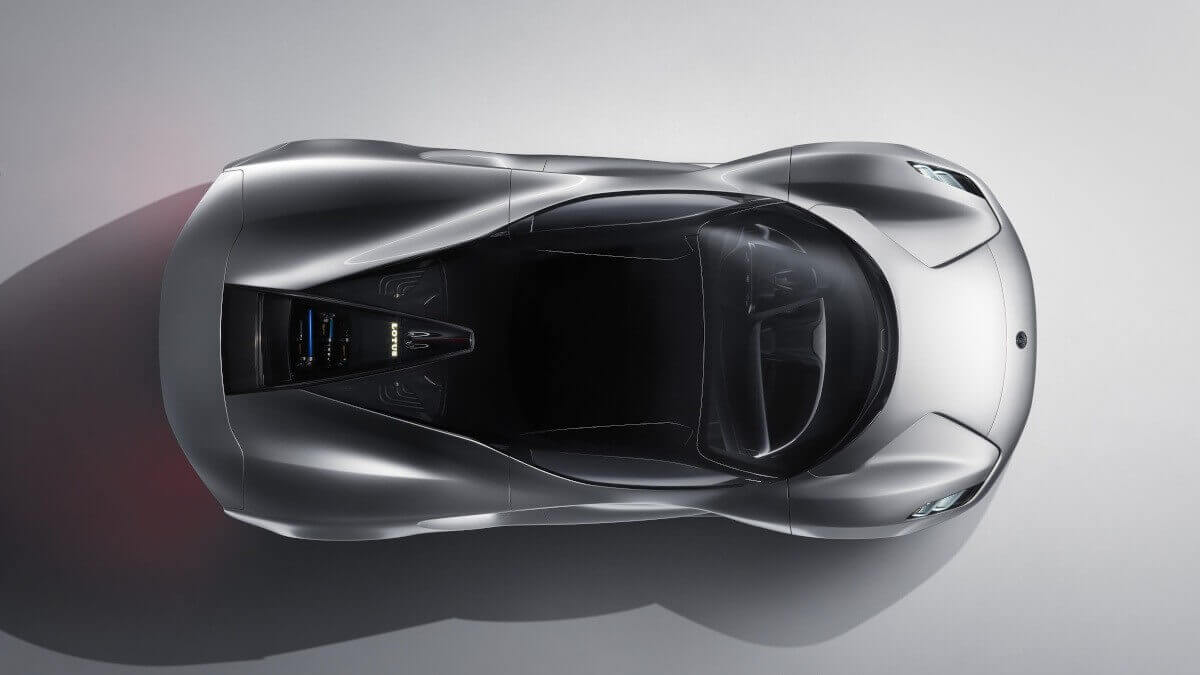 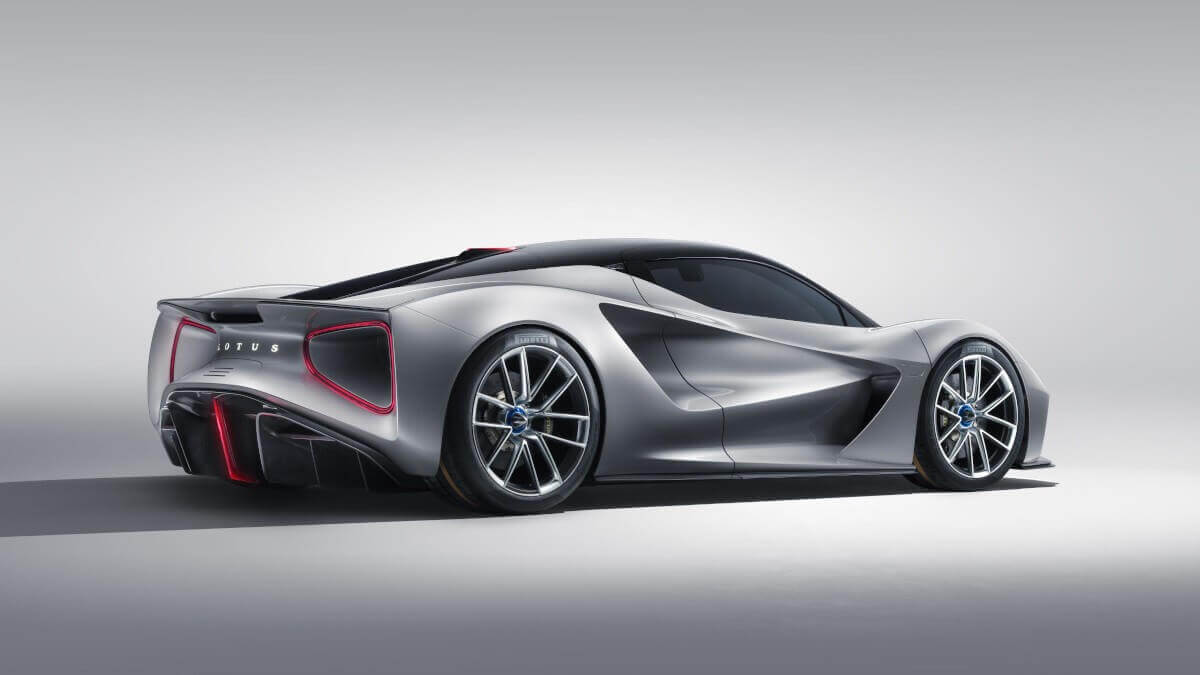 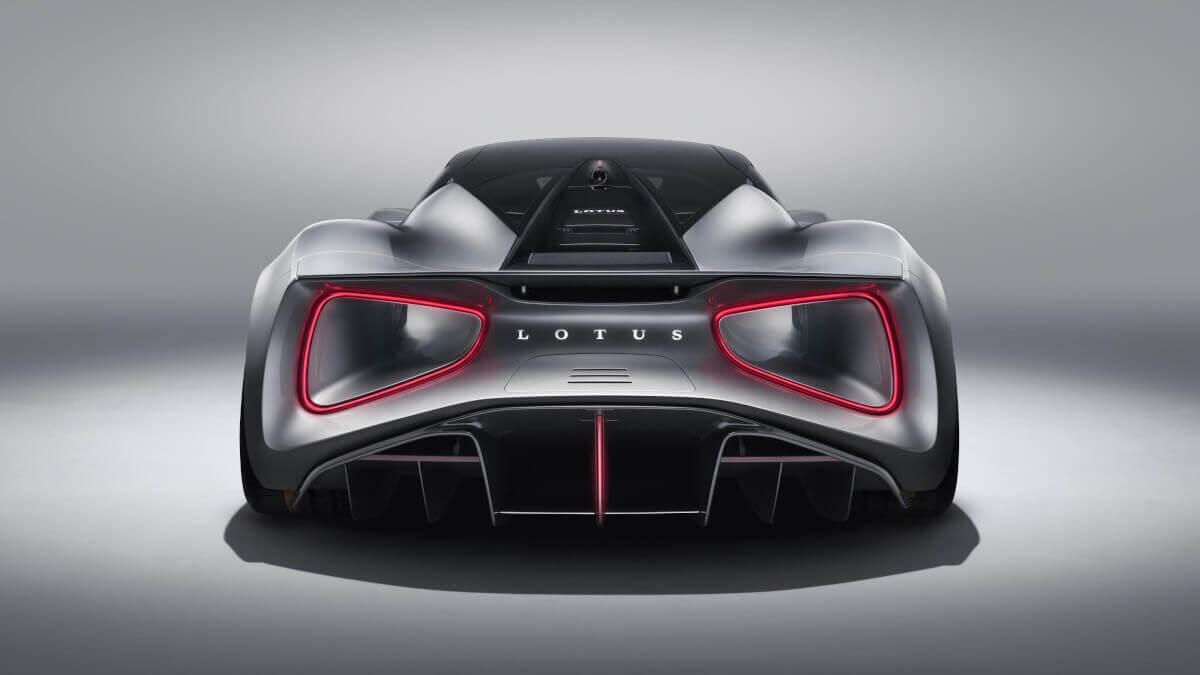 Three different driving programs are available to the driver for the most varied driving situations. In the ‘Range’ mode the focus is on optimising the range, in the ‘City’ mode the focus is on simple operation of the vehicle in city traffic, while the ‘Sport’ and ‘Track’ modes focus on maximum driving performance. According to Lotus, the battery can be charged within nine minutes – but only when there are actually 800 kW charging stations available in the future. At the current charging stations with 350 kW, which are still very rare at present, it takes 12 minutes to charge to 80 percent or 18 minutes to 100 percent according to factory specifications. These, too, are very acceptable values that make the Evija seem quite competitive in comparison to the refuelling process of a petrol engine. Lotus indicates a range of 400 kilometers according to the WLTP measurement method. A small plaque with the inscription ‘Hand Built in Britain’ on the charging socket of the Evija reminds the driver of the origin of his hypercar.

In addition to the powerful drive, another fact provides for the outstanding acceleration values and there the Evija is again in the tradition of Colin Chapman. With an unladen weight of only 1,680 kilograms, the new Lotus is remarkably light for a vehicle of this type. This value was achieved through consistent lightweight construction in the best Lotus tradition and extensive use of motorsport technologies. The chassis, made entirely of carbon fiber, is contributed by the Italian manufacturer CPC in Modena. The manufacturing process corresponds to the usual Formula 1 manufacturing method. The monocoque weighs a modest 129 kilograms.

Now a real hypercar consists not only of impressive technology and outstanding driving performance, also the optics plays a role not to be underestimated with the sales success. If you look at the new Evija from the front or from the side, you can certify that the designers have succeeded in creating a modern and harmonious design that isn’t too out of the ordinary. In some details the suspicion arises that one or the other look has wandered to Maranello and one has been inspired by the 488 Pista or the SF90 Stradale from Ferrari. Both the front part with the arrangement of the headlights and the side air intakes carry quite clear Ferrari genes. The headlights are a premiere. The Evija is the first production model to use the new laser headlights developed by Osram. The compact lighting system is designed to provide extremely good illumination of the road. 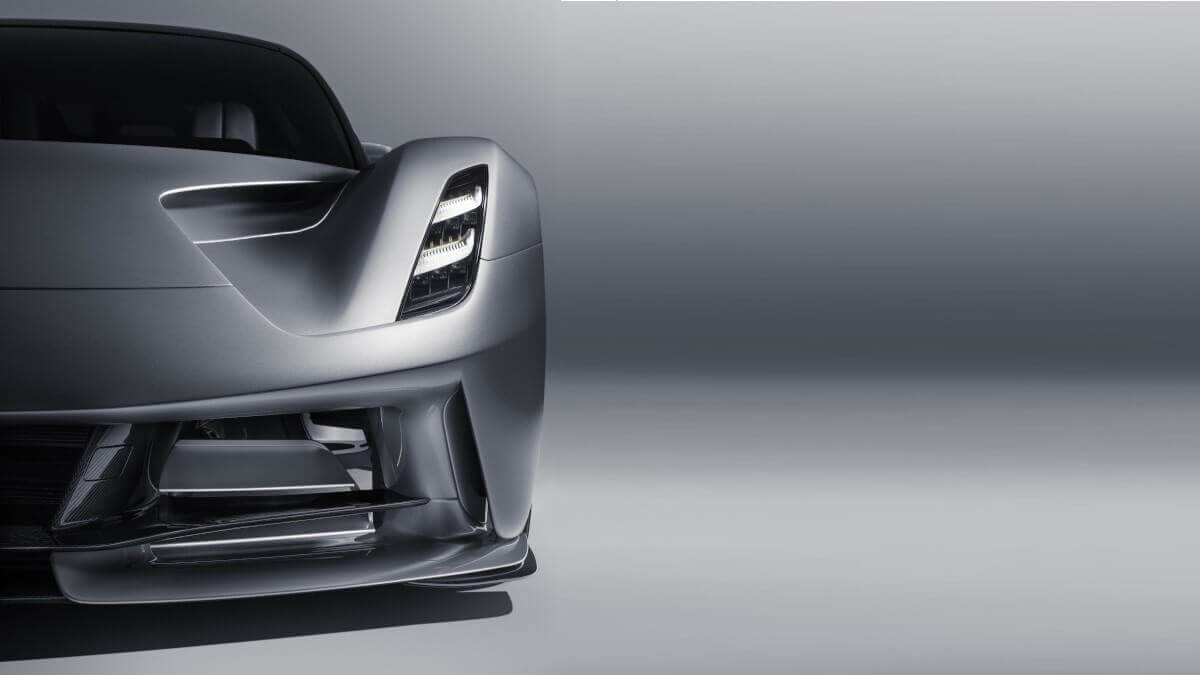 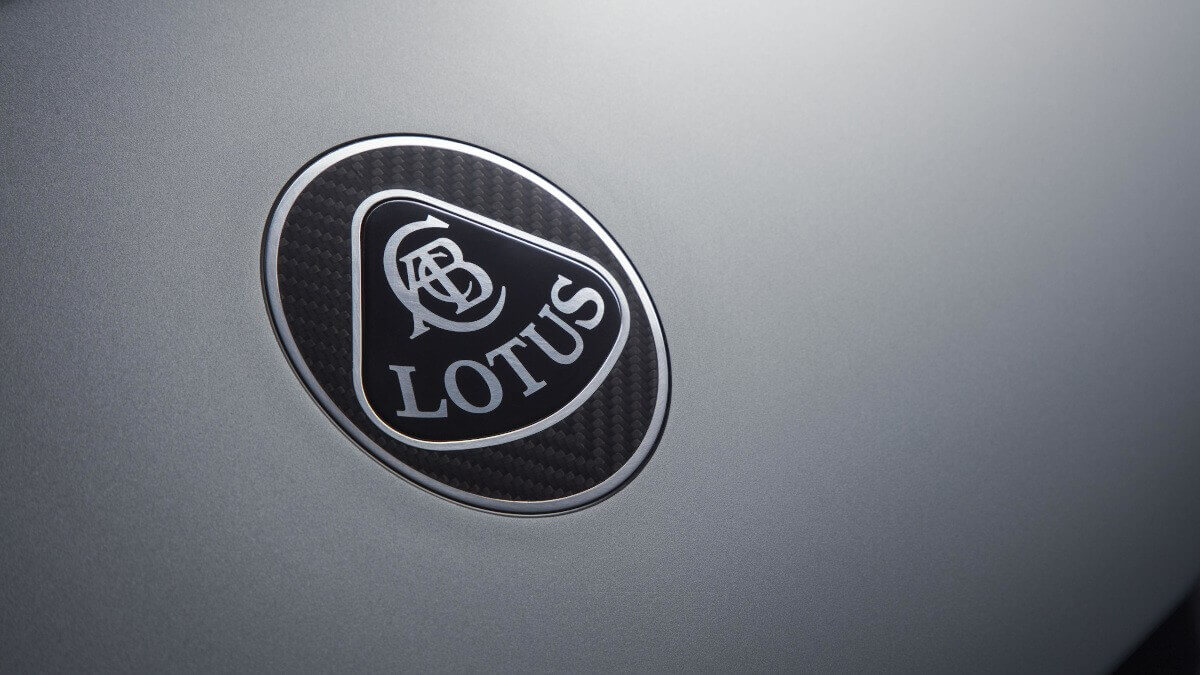 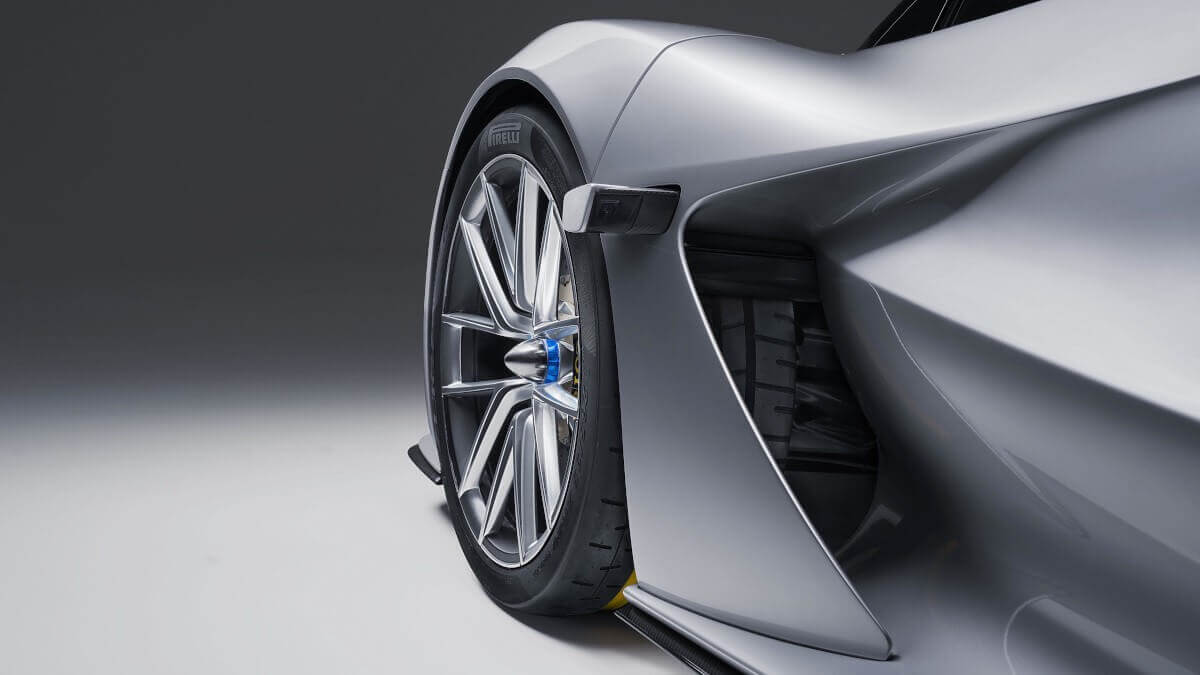 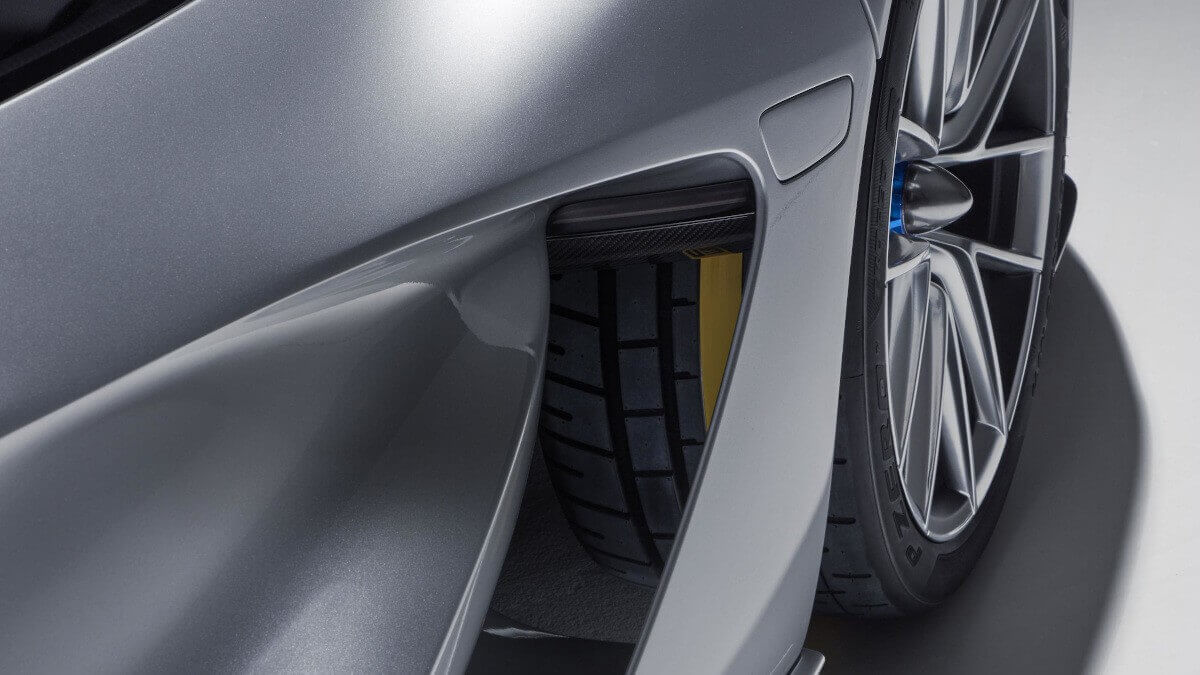 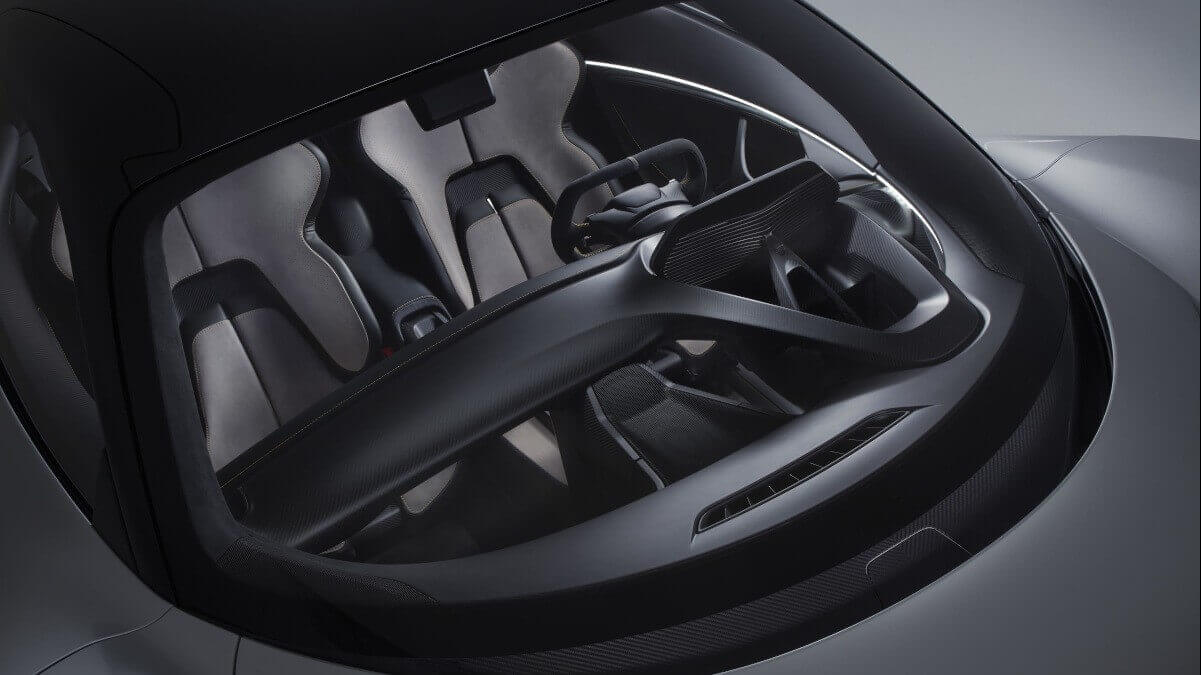 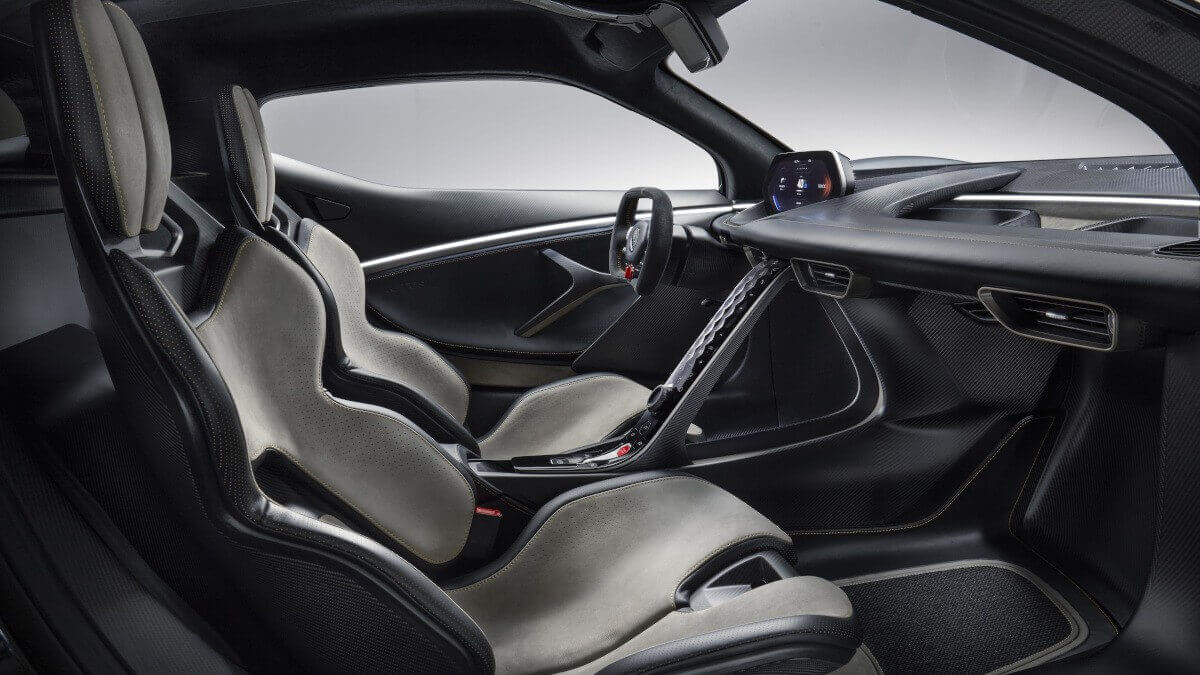 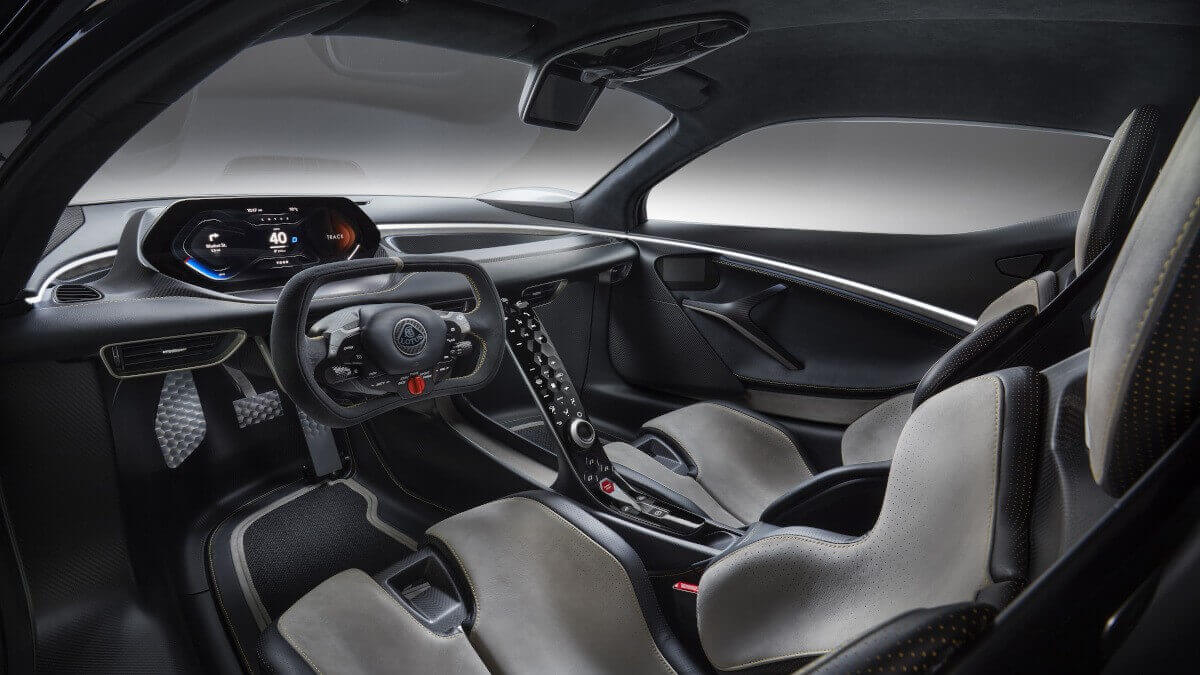 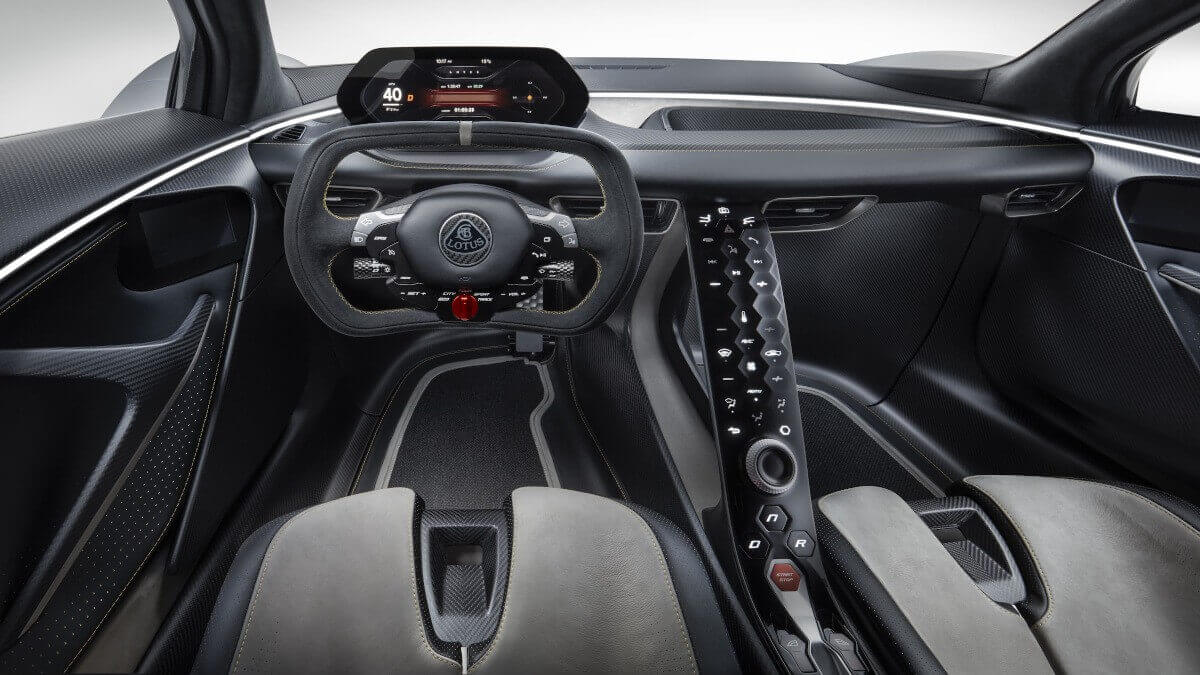 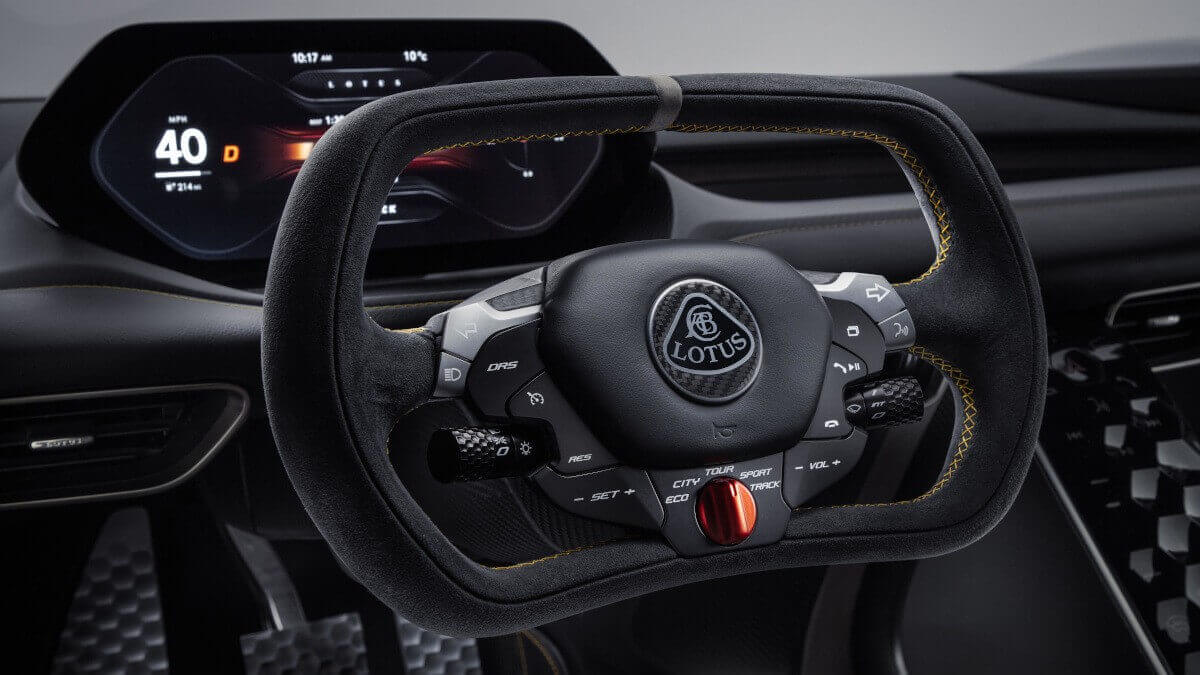 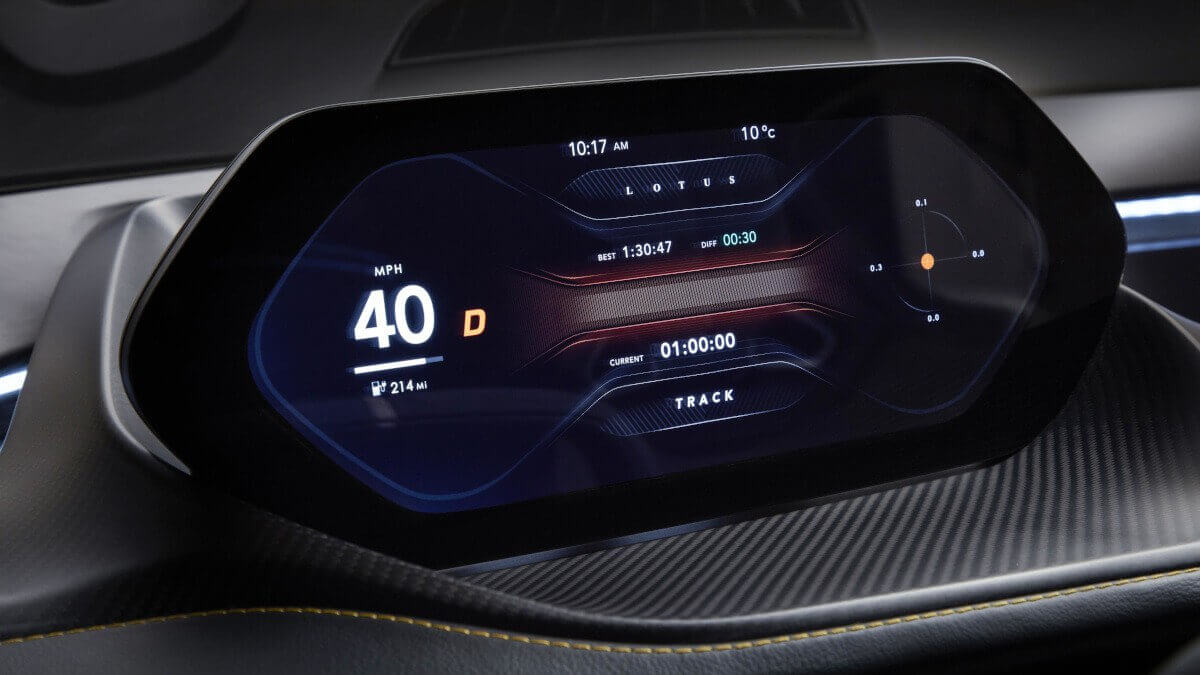 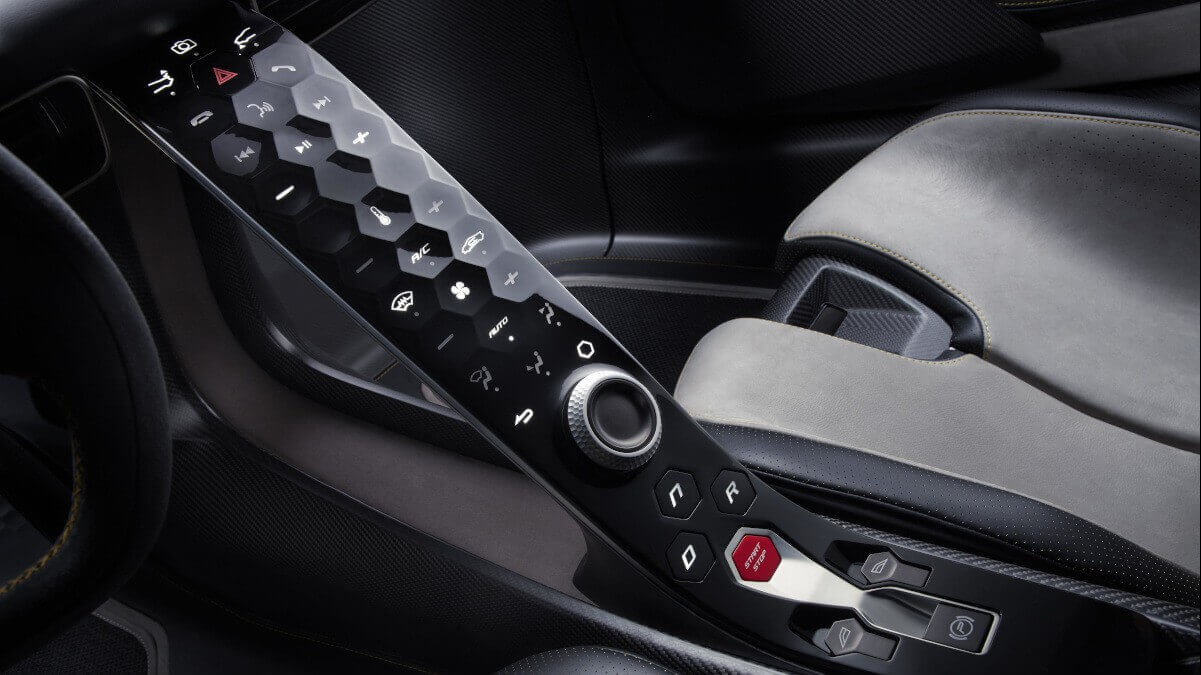 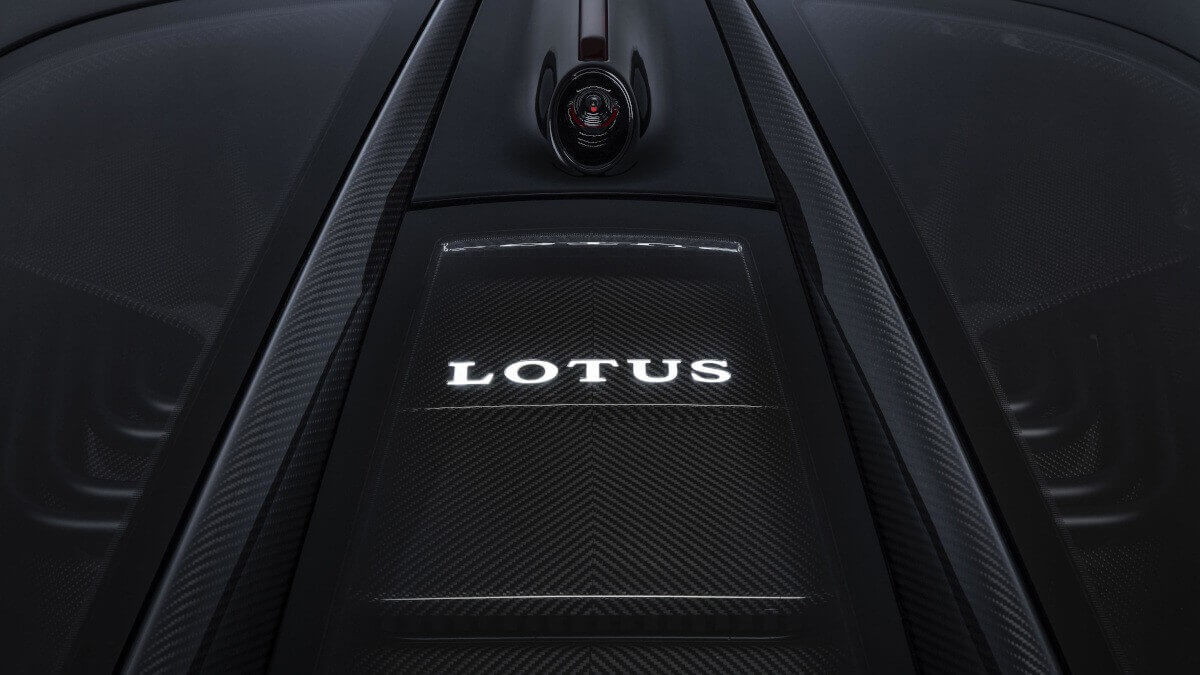 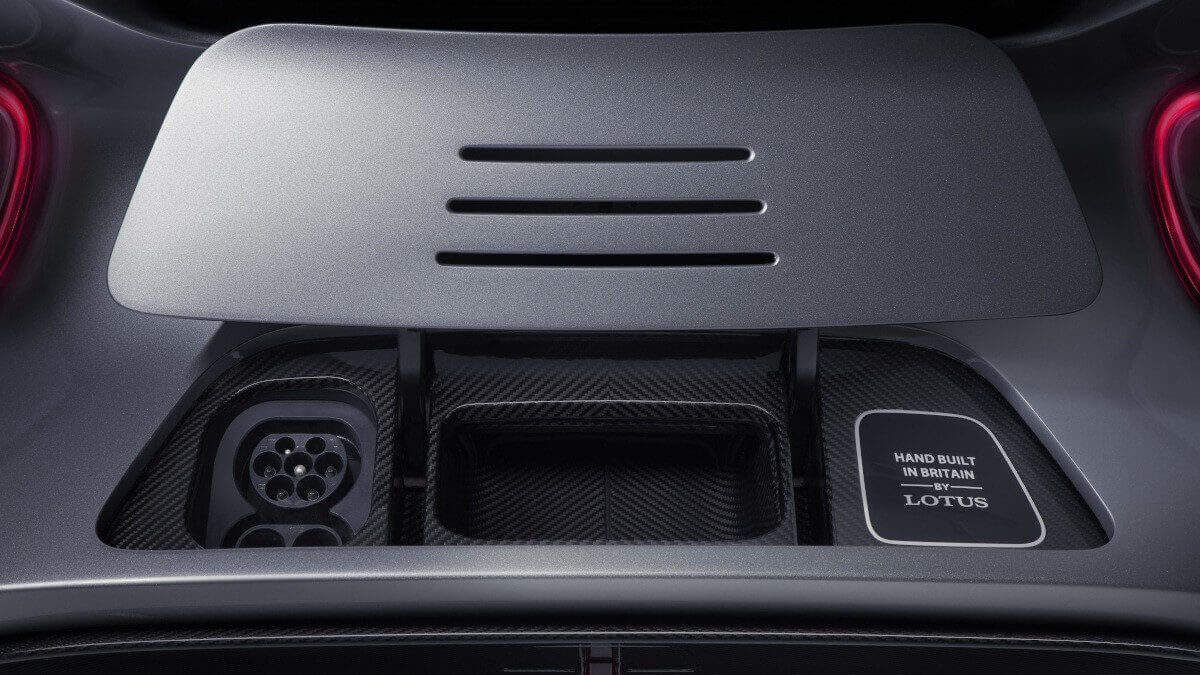 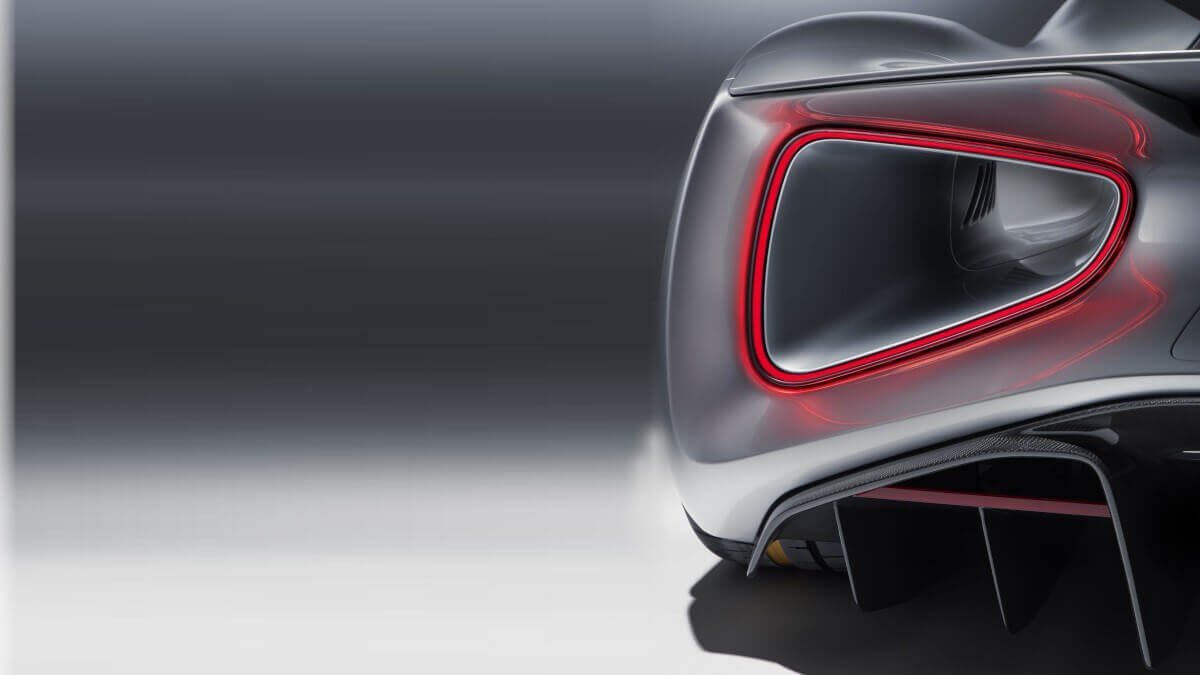 The Evija shows a completely different style in the rear view. It seems as if the designers suddenly realized that such an electric hypercar is something futuristic and you have to reflect this in the design. Narrow lighting units, which frame the gigantic rear air outlets, dominate the view of the rear, as does the large diffuser interrupted in the middle. A typical problem of many modern sports cars is the lack of space for the license plate both at the front and rear. All in all, however, the front and side designs don’t really match the shape of the rear. While the mechanism of the doors is strongly reminiscent of the current McLaren models, it is noticeable in the side view that Lotus dispenses with classic exterior mirrors and replaces them with cameras, that transmit their images to the display located centrally in front of the driver, to optimize the aerodynamics.

With this we arrive in the interior of the new Lotus Evija. Similar to the rear side of the car, the cockpit is modern to futuristic. The steering wheel, flattened at the top and bottom, with center markings, provides a view of a digital display reminiscent of McLaren’s folding display in the 720S and Senna. In the Evija, however, it is fixed. Lotus completely dispenses with levers on the steering column and places the most important operating elements in the center of the steering wheel, while the secondary functions are located on a free-floating center console that is somewhat reminiscent of the remote console that is somewhat reminiscent of the remote control of an entertainment center. So far the Evija captivates with a harmonious design in the interior. The strongly contoured seats offer good lateral support and good space for driver and passenger. In addition, the sports car is the first Lotus to offer full connectivity. The owner can also permanently monitor his car via the data cloud using an app.

Starting next year, Lotus plans to start production of a maximum of 130 copies of the Evija at its main plant in Hethel. The vehicles are assembled by hand and the order books have been opened for a few days. To get on the list, Lotus asks for a deposit of 250,000 GBP. The simplest version of the new British hypercar has a purchase price of 1.7 million pounds. Thanks to the numerous possibilities for individualisation, it can also be a little more. “Evija will re-establish the brand in the hearts of sports car enthusiasts and pave the way for more visionary models,” said Phil Popham, head of the brand, euphorically speaking in London. With the help of the Chinese parent company Geely, various other models are to follow, including a successor to the Elise, which has been on the market for 20 years. In total, the Chinese want to invest almost two billion dollars in the traditional sports car manufacturer. If they do this as cleverly and sensitively as with Volvo, the Lotus brand should have a good future and a second debacle should be spared, as with the generous promises of Danny Bahar at the Paris Motor Show in 2010.