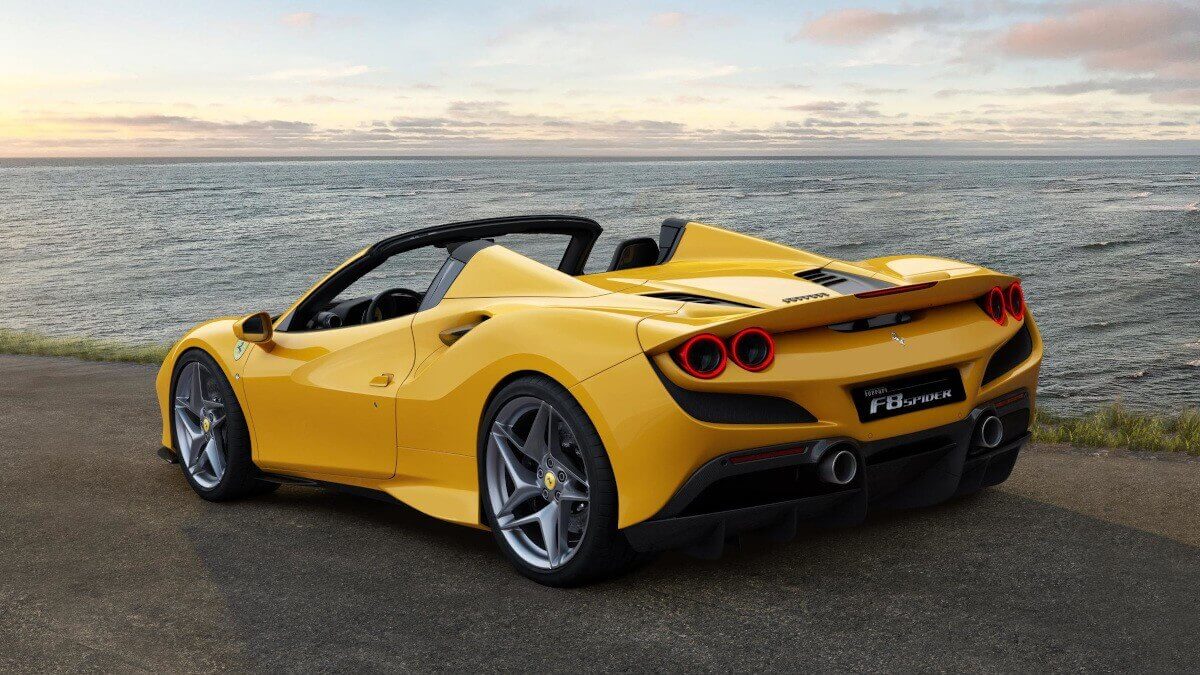 Tomorrow the IAA (Frankfurt Motor Show), once one of the largest and most important motor shows in the world, begins in Frankfurt am Main/Germany. Unfortunately, the importance of this event has been steadily reduced in recent years, so that this year’s edition will exceed the status of a local dealer trade fair only just. Various brands, that used to be fixed names at the IAA in former years, will stay at home and prefer to present their innovations to their customers at their own events. Among them is Ferrari, which last week presented two new convertibles in a special VIP event. While the F8 Spider as an open version of the F8 Tributo was quite logically foreseeable, the 812 GTS with its twelve-cylinder engine in front inherits the 599 SA Aperta from 2010.

Like the F8 Tributo, the F8 Spider is the third edition of a vehicle that made its debut as the 458 Spider and finally evolved into the 488 Spider. This means that the familiar retractable hard top (RHT) which can be electrically retracted or closed within 14 seconds, remains above the heads of the passengers. It folds in two parts into a compartment above the engine. Like the Coupé, an S-Duct system is used at the front of the car to divert the airflow according to the current application and thus generate more or less downforce. The LED headlights are significantly smaller than at the predecessor model. Compared to the 488, the lateral air intakes behind the doors were enlarged and new blades were added. At the rear, the redesigned rear spoiler visually encloses the four round tail lights. Underneath are two exhaust tailpipes and the wide diffuser. In the interior, the driver-oriented arrangement of the control elements, most of which located on the steering wheel, is maintained from the Coupé. Behind the steering wheel is an analogue rev counter with displays on both sides. On the passenger’s side, above the glove box, there is an optional additional seven-inch display with the most important data shown. 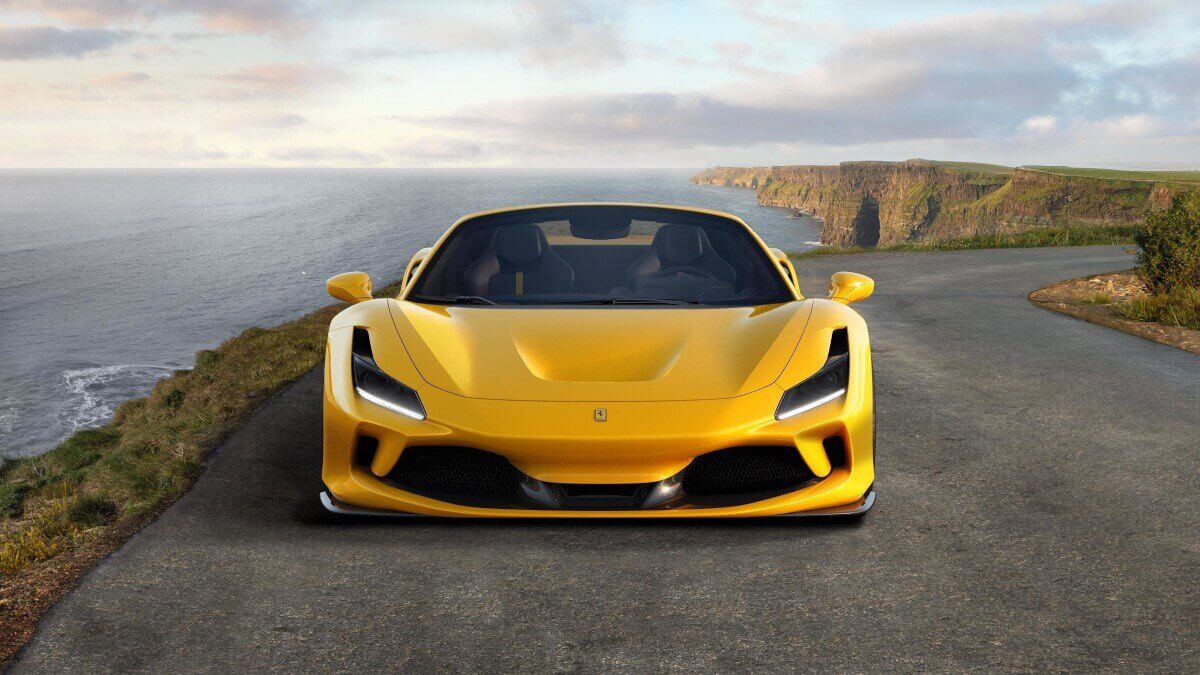 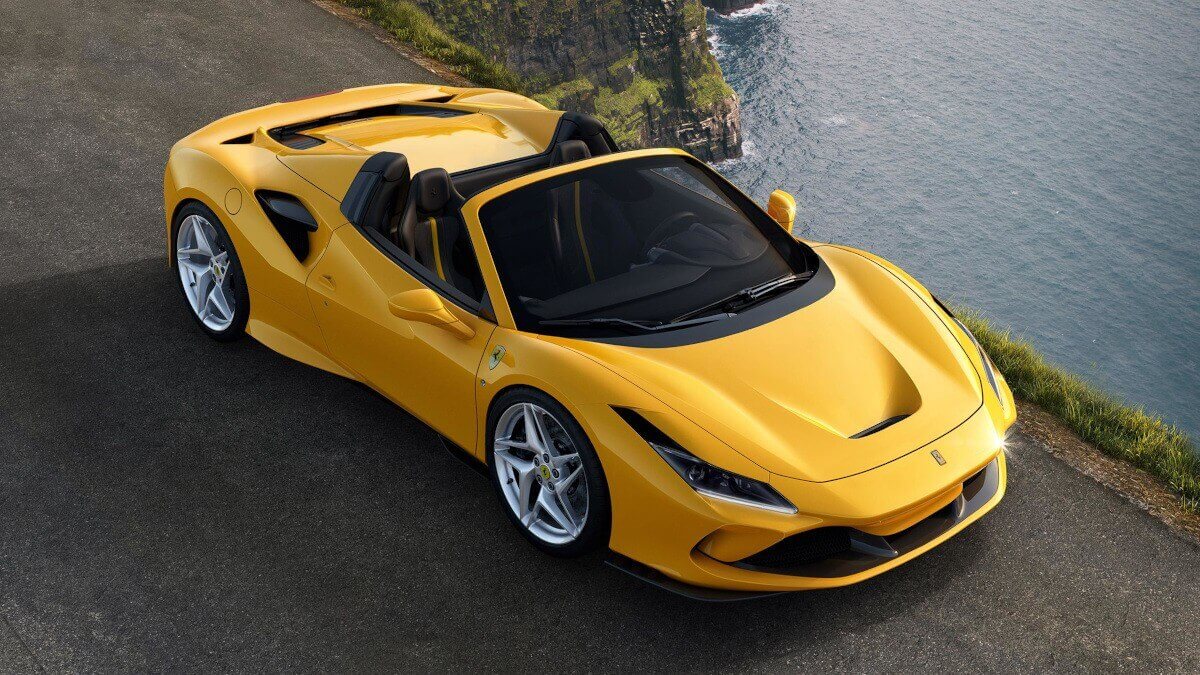 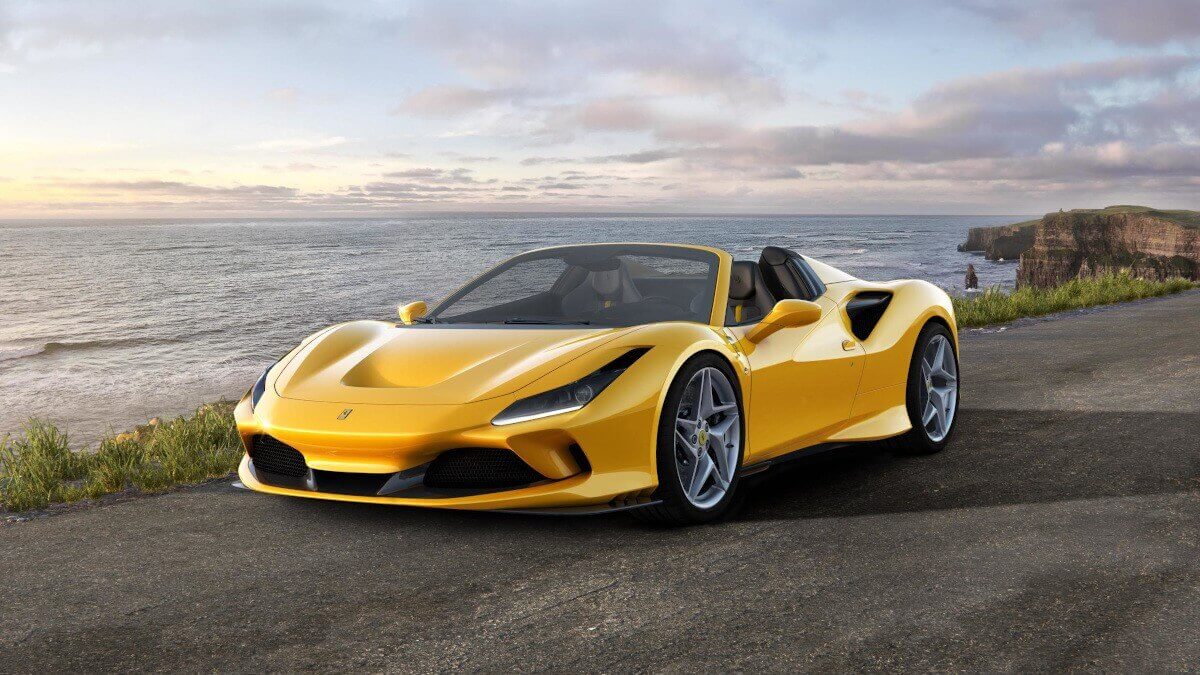 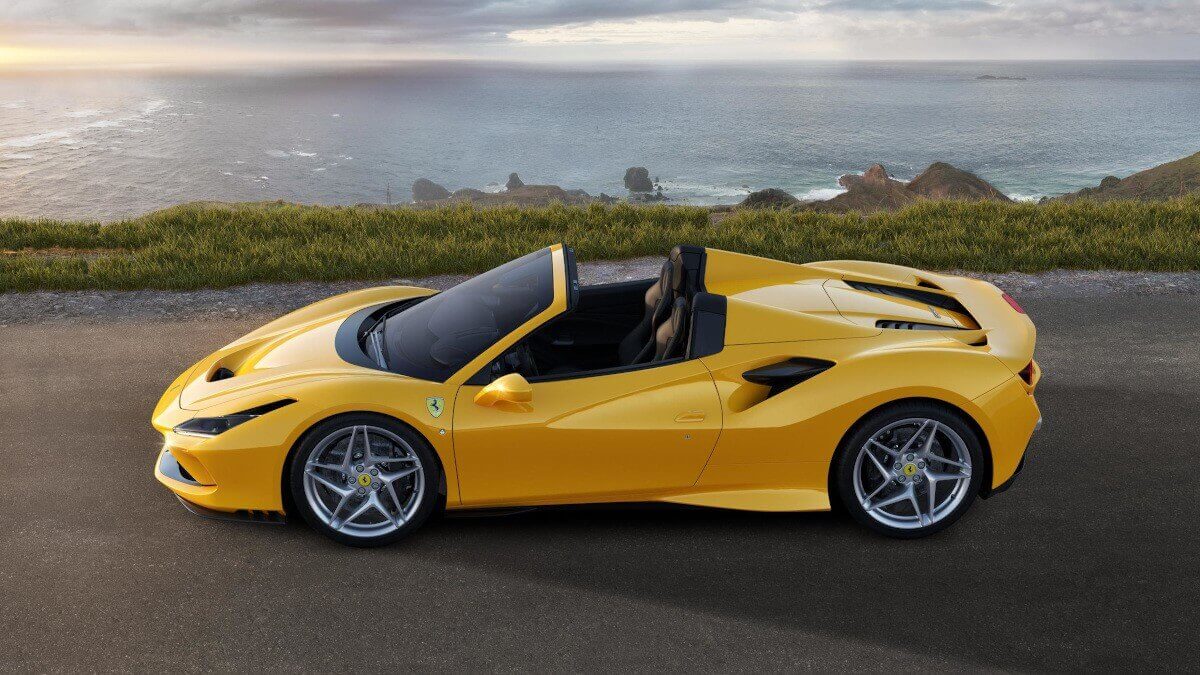 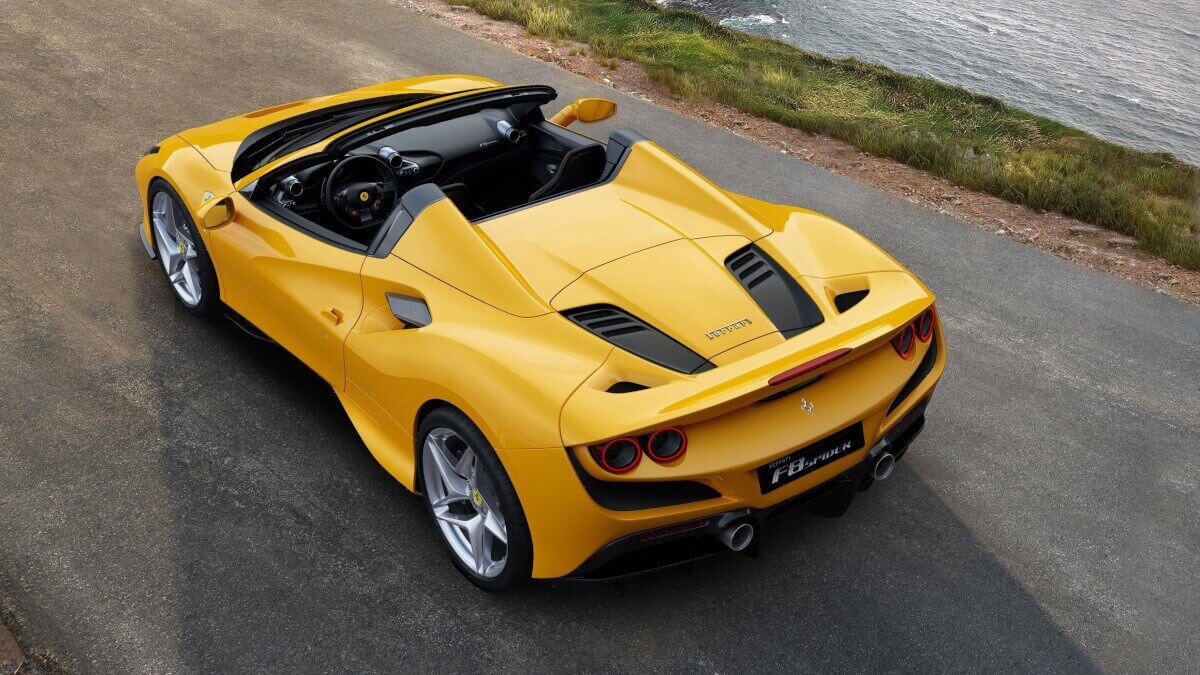 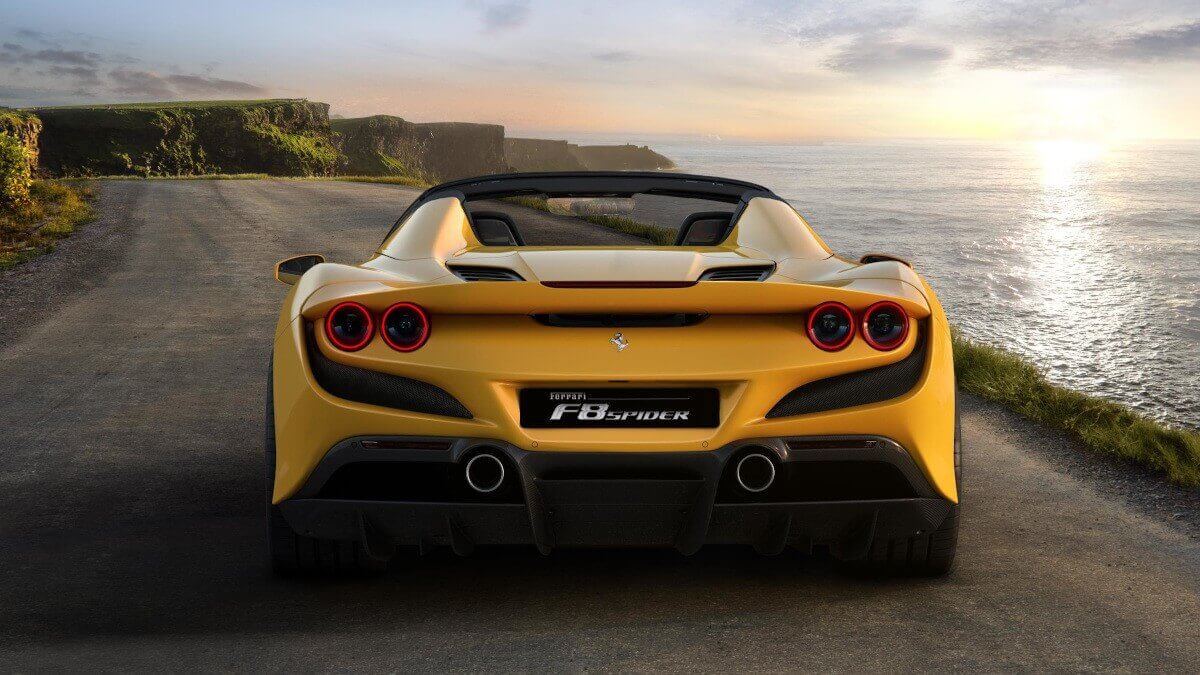 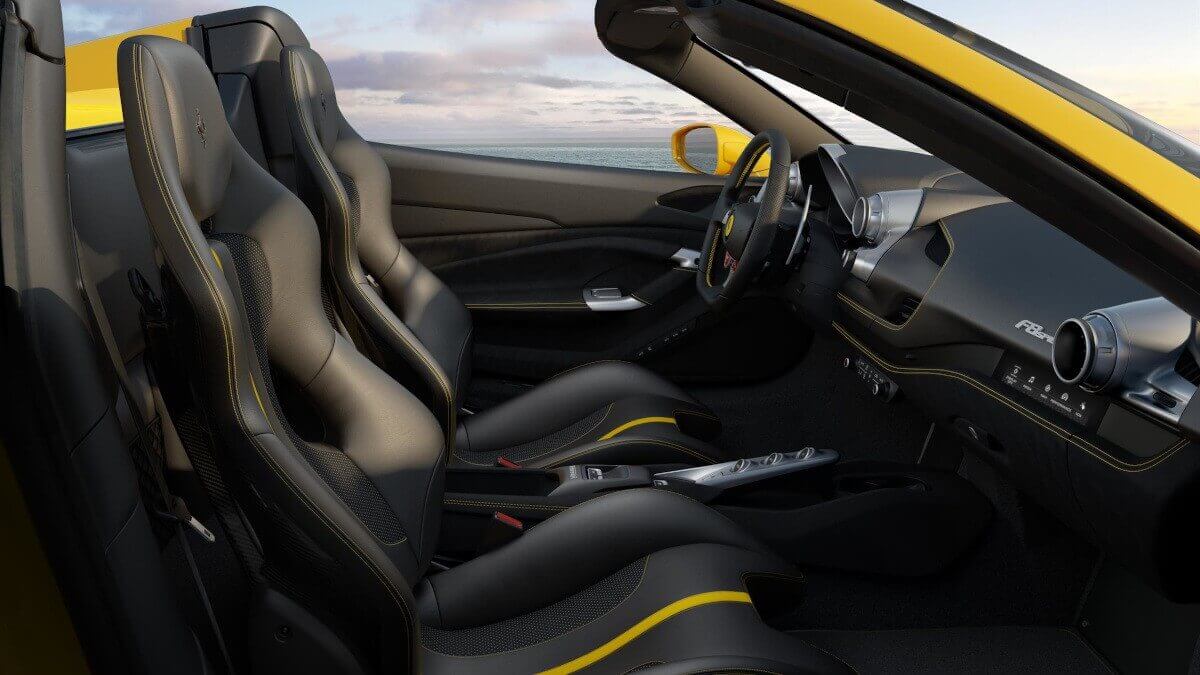 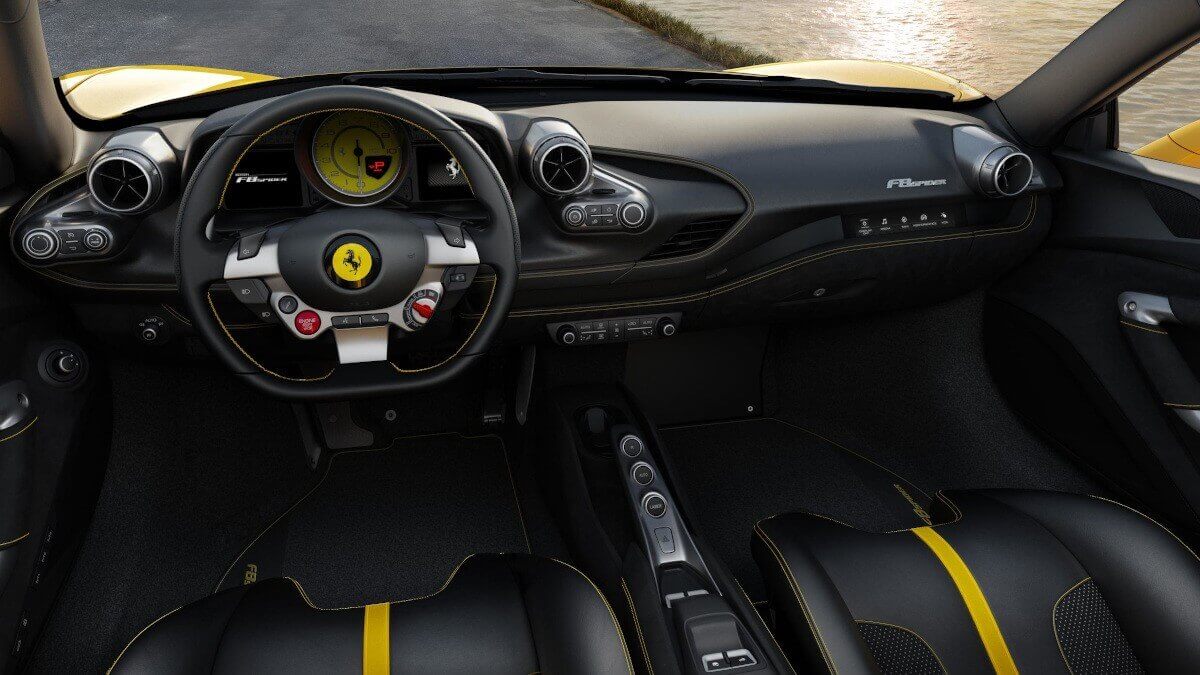 Ferrari has already received several awards for the 3.9 liter V8 biturbo engine, which also powers the new F8 Spider. In the latest version, it delivers 530 kW/720 PS and 770 newtonmeters of torque to the crankshaft. This means that the liter output is an impressive 185 hp per liter displacement. In comparison to the 488 Spider, Ferrari added 50 horsepower and 10 newtonmeters. This means that it can accelerate to 100 kph (62 mph) in 2.9 seconds and to 200 kph (124 mph) in 8.2 seconds. The data sheet also shows a topspeed of 340 kph (211 mph). At the same time, weight-saving measures from the 488 Pista were used to reduce the engine’s weight by 18 kilograms. The exhaust manifolds made of the high-performance material Inconel together are already 9.7 kilograms lighter than the parts from the 488. For the first time, the exhaust system itself contains an petrol particulate filter, which is now required for approval in various countries.

Open sports cars with a naturally aspirated V12 engine above the front axle are actually part of Ferrari’s DNA. Already the early models like the 125 S, 166 MM, 275 GTS or the 365 GTS/4 ‘Daytona’ showed this principle of construction. With the change to mid-engined models like the 512 BB and Testarossa, the factory stopped offering convertible versions, while there were corresponding conversions by Pininfarina and other companies. Only with the return to the front engine concept in the 550 Maranello there were also again open version ex works, which were now however always only offered in limited quantities. They only offered 449 copies of the 550 Barchettta, 559 copies of the 575 Superamerica, only 80 of the 599 SA Aperta (even there are more copies known) and finally only ten units of the F60 America in North America. With the new 812 GTS Ferrari returns to unlimited, open V12 sports cars. Like the F8 Spider, the big model brother also uses an electrically retractable hardtop, which disappears or emerges in its compartment within 14 seconds and also up to a driving speed of up to 45 kph (28 mph). The vertical rear window serves as a wind deflector and can be opened separately when the hood is closed to experience more engine sound in the interior. 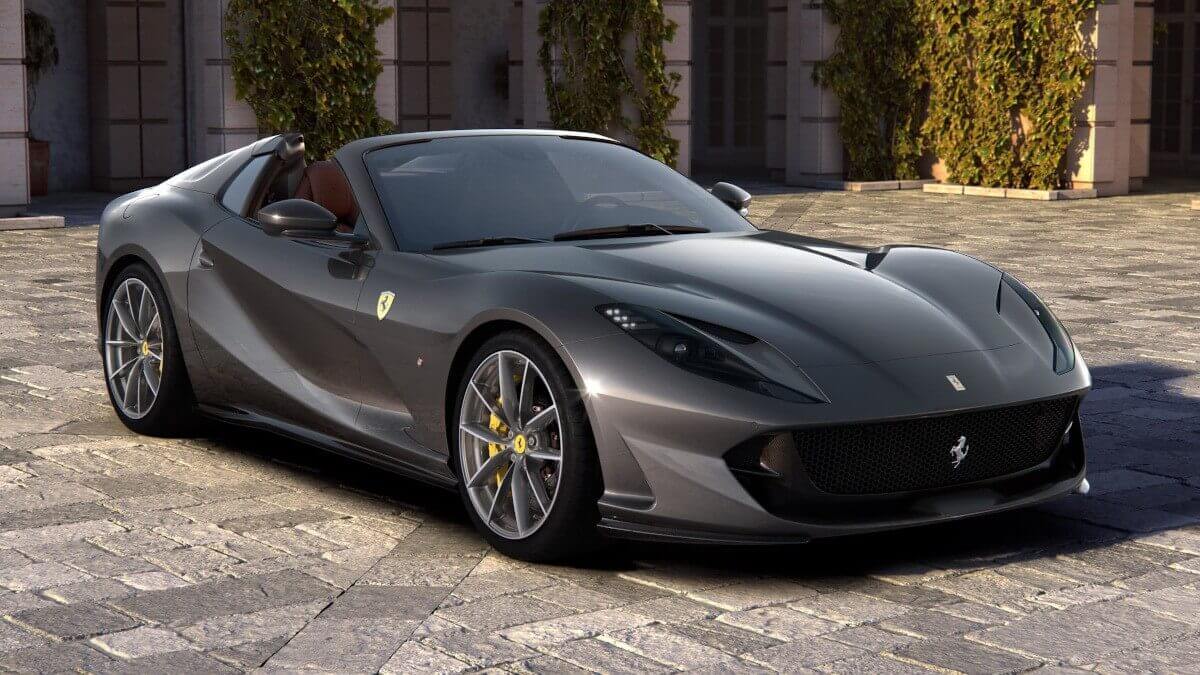 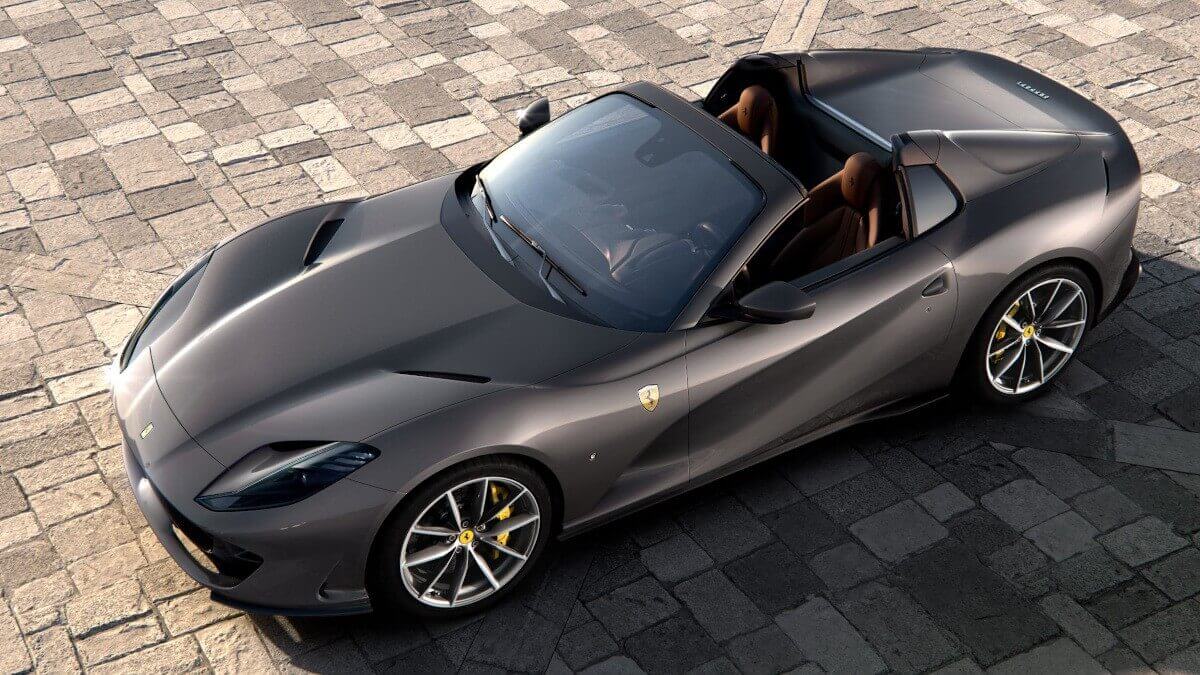 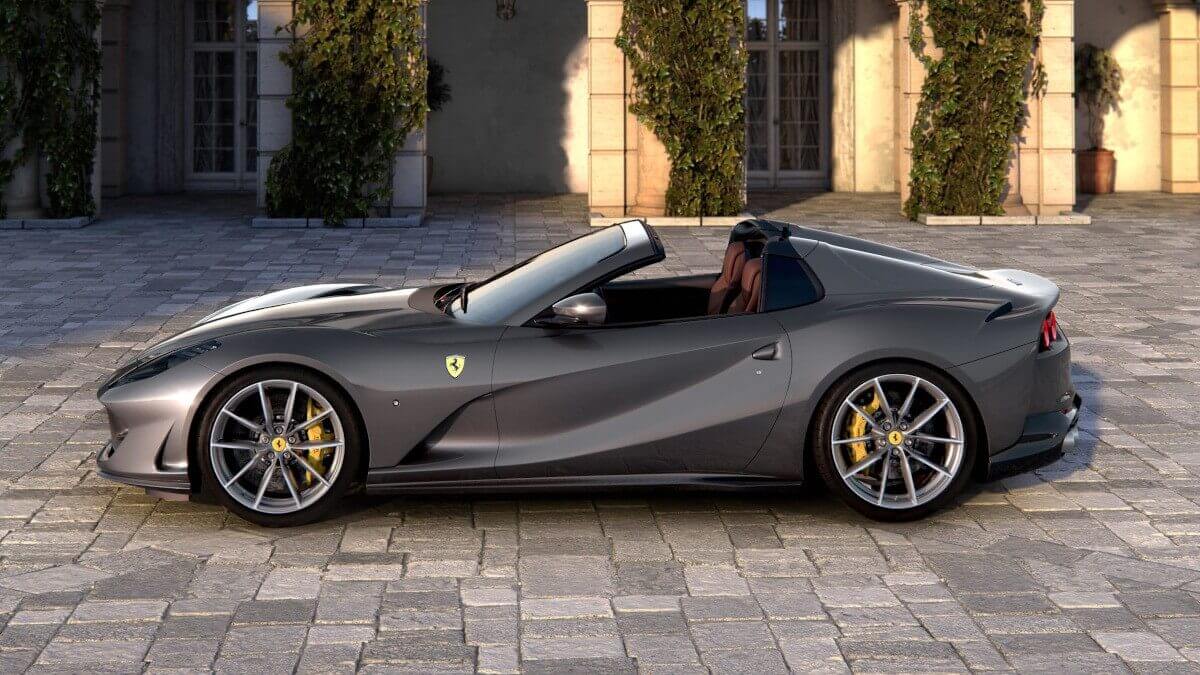 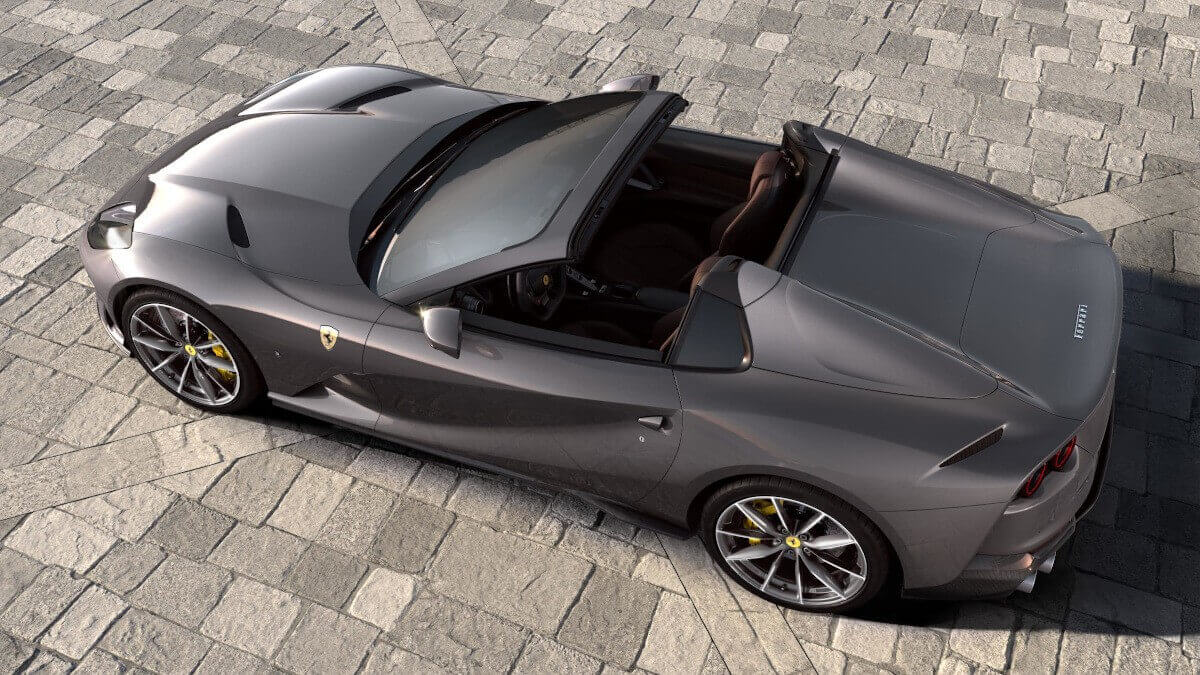 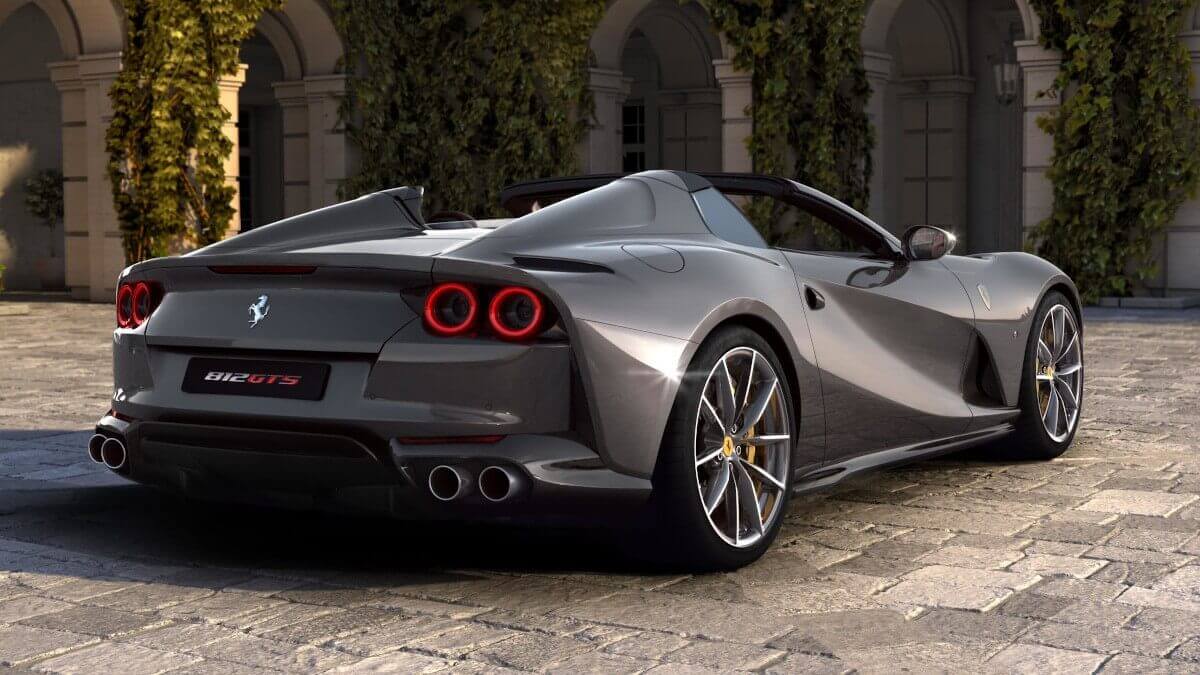 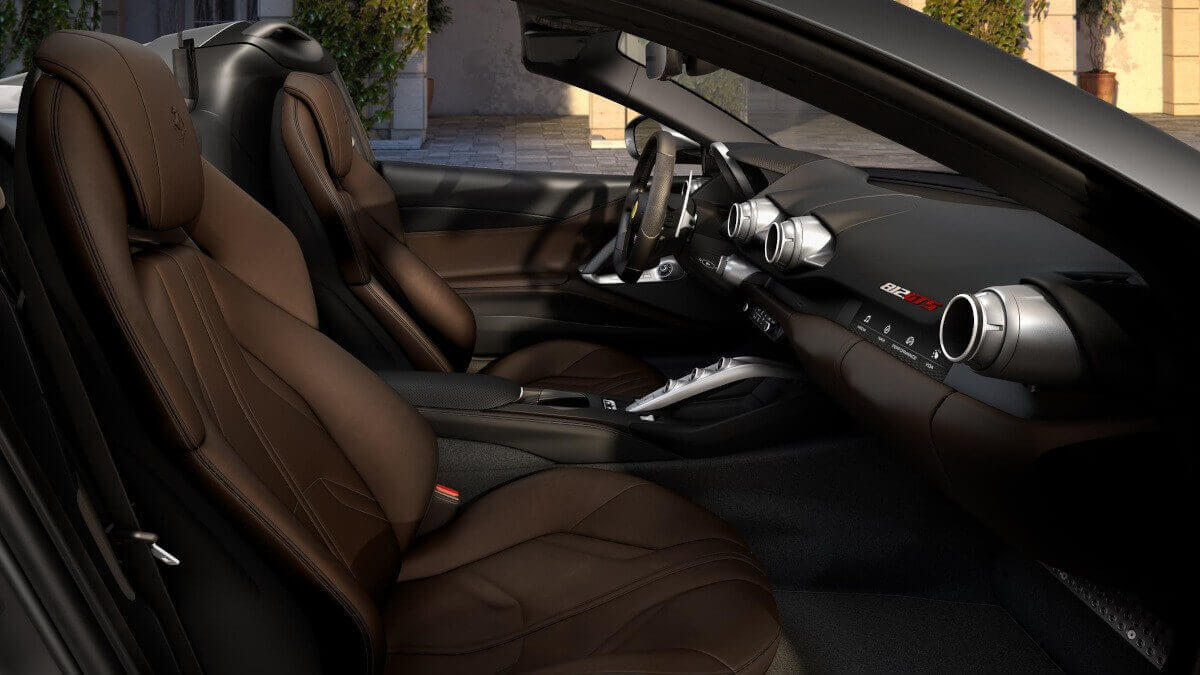 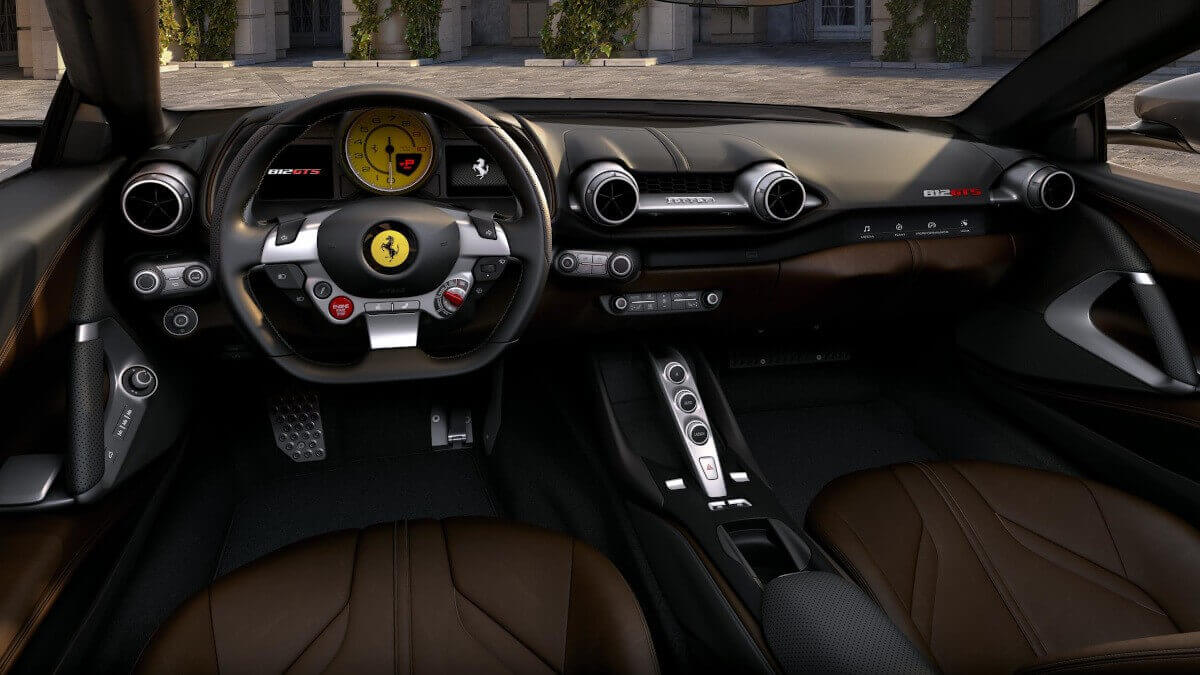 A 6.5-liter V12 engine with 588 kW/800 hp and 718 newtonmeters of torque sits under the long bonnet. The direct injection system sprays the fuel into the cylinders at 350 bar pressure. From the Formula 1 team they took over variable adjustable air intake tracts. With all the technology the car accelerates in less than three seconds to 100 kph (62 mph) and in 8.3 seconds to 200 kph (124 mph). Maximum speed is said to be more than 340 kph (211 mph). This is made possible by a seven-speed dual-clutch gearbox. For more agile handling on twisty roads, an all-wheel steering system is used which gives the driver the impression of a shortened wheelbase and is therefore called ‘Virtual Short Wheelbase 2.0’.

Compared to the closed 812 Superfast, the 812 GTS has a completely redesigned upper rear area beginning from the rear end of the doors. The side windows are located in front of dark areas which are mounted to narrow roll bars whose upper edges drop diagonally to the spoiler lip at the rear. The bars and the area between them contain the flap for the soft top box, behind which the new boot opening can be found. Front, sides and rear with tail lights and diffuser are unchanged compared to the Coupé. The interior hasn’t been changed either, apart from the button for the hardtop roof.

Both model series can be ordered immediately. The first units will be on their way to dealers and customers this year. Ferrari didn’t give any information about the prices. But they refer in the press text to the new, seven-year warranty for new vehicles.