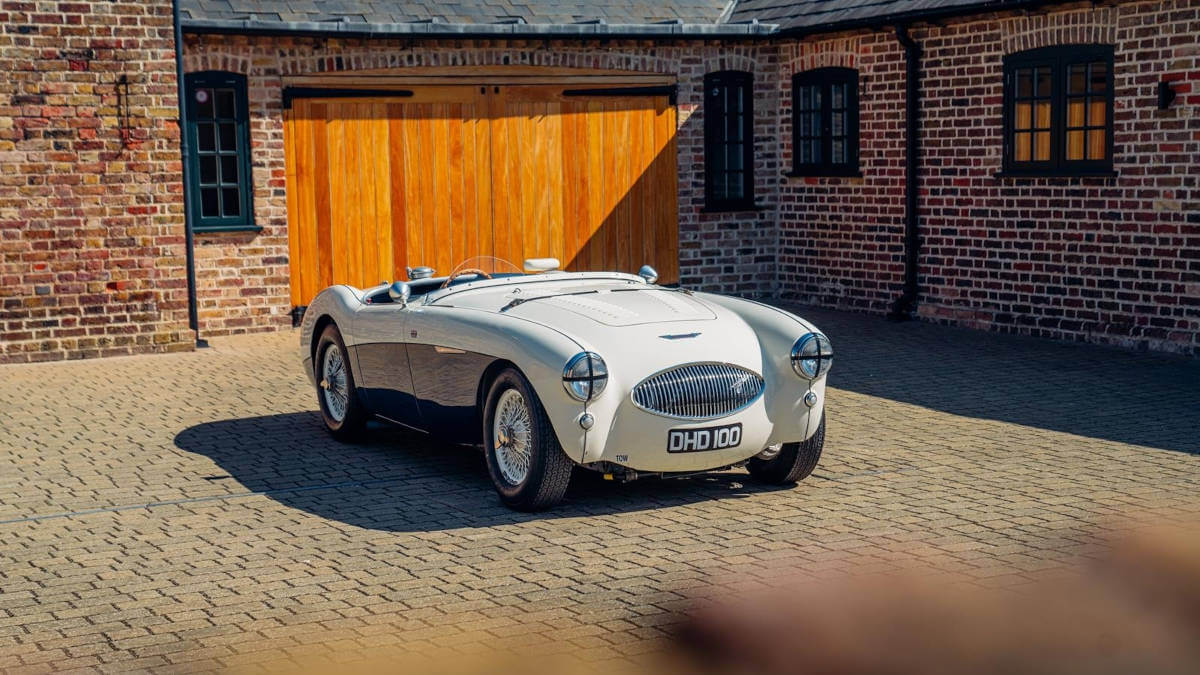 European sports cars enjoyed high popularity in the USA from the end of the 1940s. More and more manufacturers responded to this demand with new models. Among them was Donald Healey’s small company. For the 1952 London Motor Show, the Healey 100 was created as a two-seater roadster prototype. Although the car was allowed to be tested by some journalists even before the show, the company boss didn’t agree with the front design, especially that of the radiator grille. At the Motor Show, he therefore initially placed the prototype behind a pillar in such a way that this part wasn’t visible. His team changed this position the following day. The roadster became the star of the show and Healey received many pre-orders. Under the hood was the four-cylinder engine of the Austin A90 Atlantic.

Cooperation between Healey and Austin

Leonard Lord, then chairman of British Motor Corporation (BMC), Austin’s parent company, also spotted this prototype during his tour of the show. While still at the event, he signed a cooperation agreement with Donald Healey to build this car. Overnight, they installed new ‘Austin-Healey’ logos on the show car. As the Austin-Healey 100, the sports car was to be manufactured at Austin, while Healey was to take care specifically of further development and motorsport activities. Only minimal changes were made until the start of series production a little later. The radiator grille, which Donald Healey disliked, and the position of the headlights were among them – the latter to comply with registration regulations. Since Austin had yet to complete preparations for mass production, the first dealer demonstration cars and a few early racing variants were still built at Healey. Production at Austin began in early 1953. The construction of the painted bodyshells were subcontracted to Jensen.

Topspeed led to the model name

Initially, the Austin-Healey 100 was internally called BN1 and had a 2.7-liter four-cylinder engine with 67 kW/91 hp. Since the four-speed transmission from Austin was extremely short in first gear, this was blocked in the sports car and the vehicle was delivered with three forward gears instead. An overdrive for the two highest gears lowered the revs at high speed. For the chassis, Healey used independent suspension on wishbones at the front and a rigid rear axle with leaf springs and a Panhard bar. Girling drum brakes sat behind the standard spoked rims with center locks. The designation ‘100’ was due to the topspeed of 100 mph, which had already been targeted at the project stage. Production cars were even faster than that. For example, a test vehicle at ‘The Motor’ in 1953 reached a measured topspeed of 106 mph and accelerated from a standstill to 60 mph in 11.2 seconds. 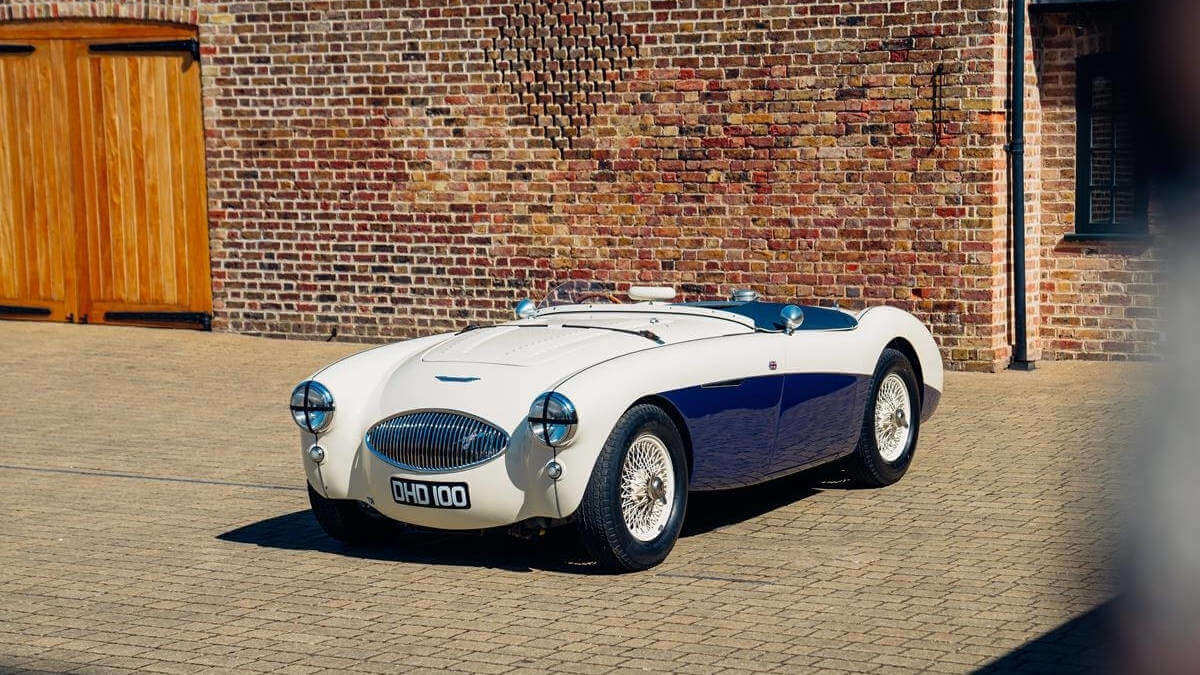 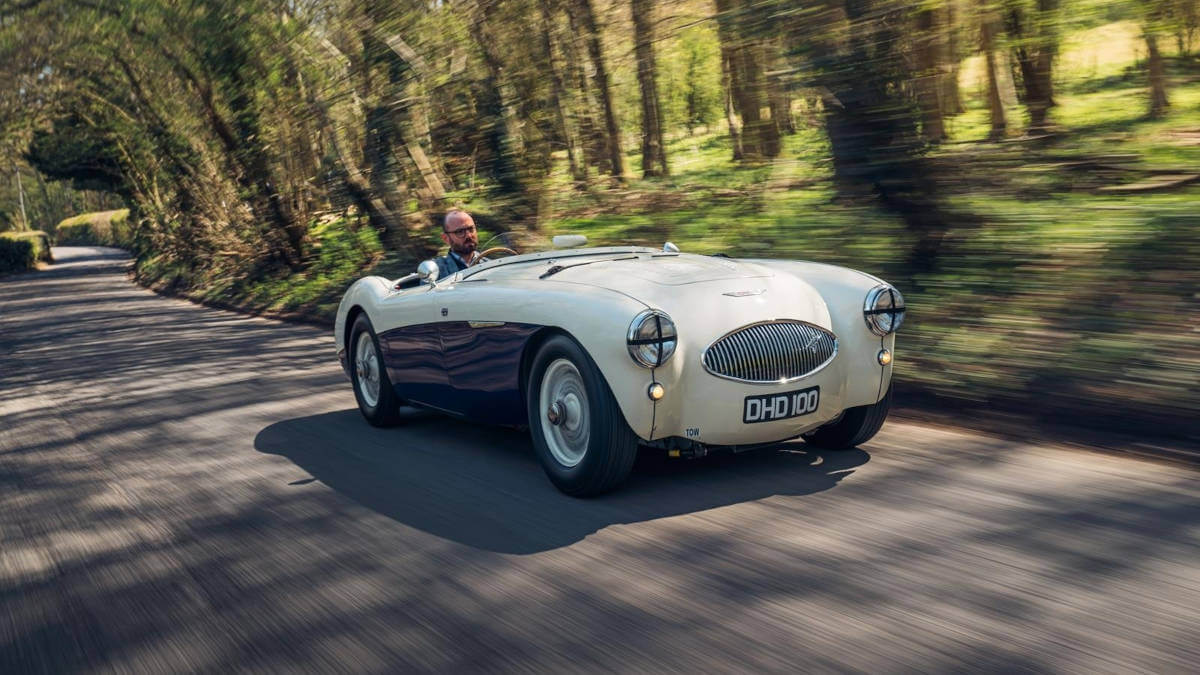 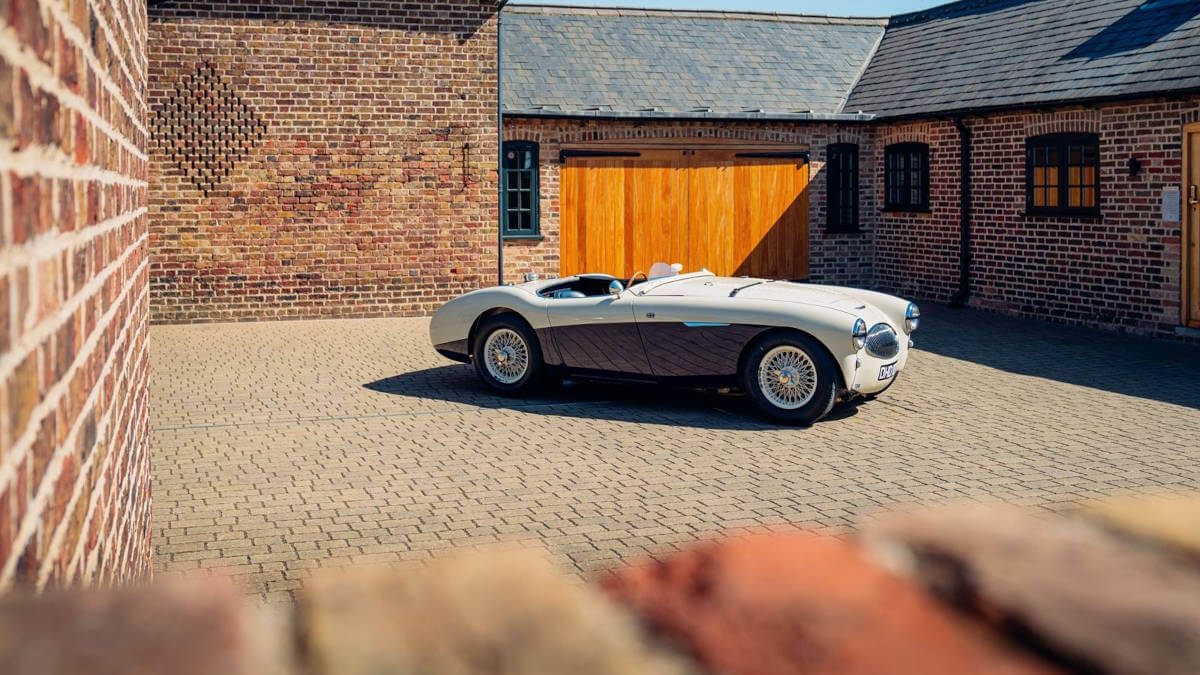 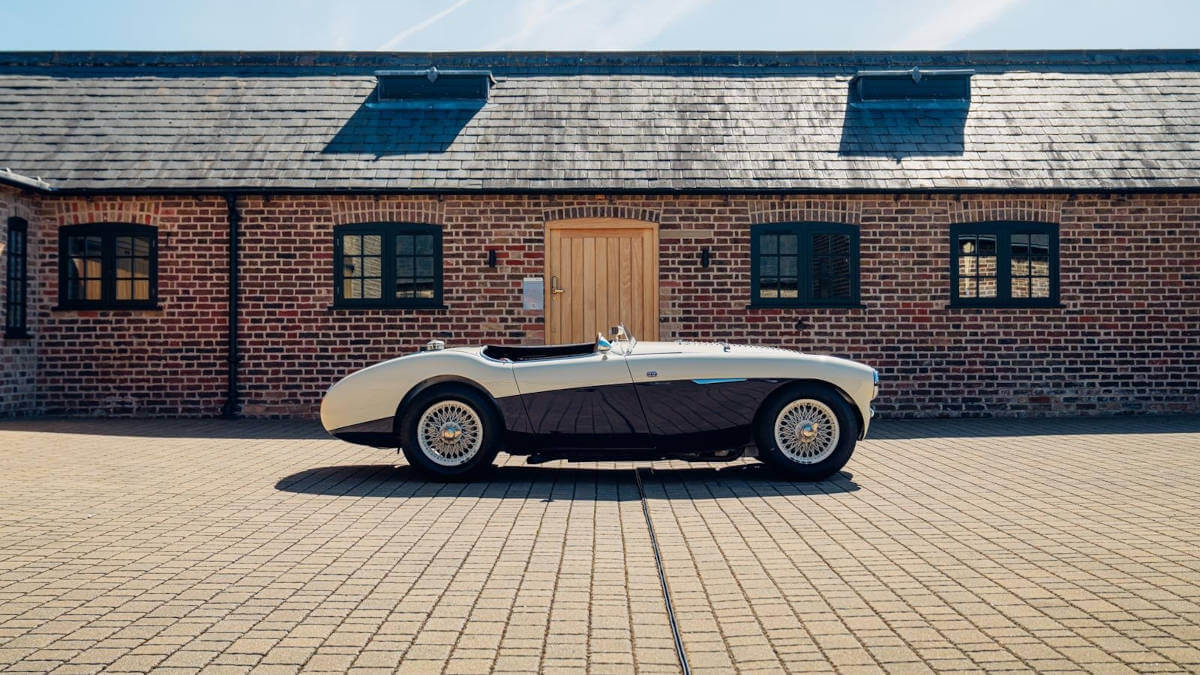 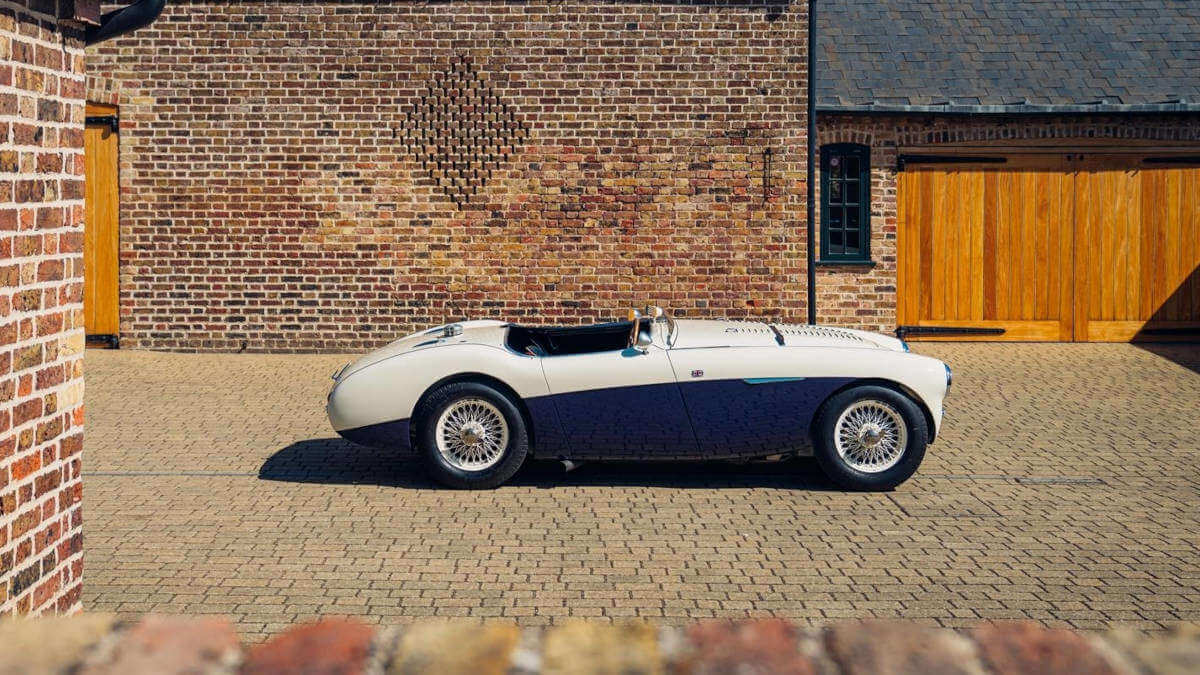 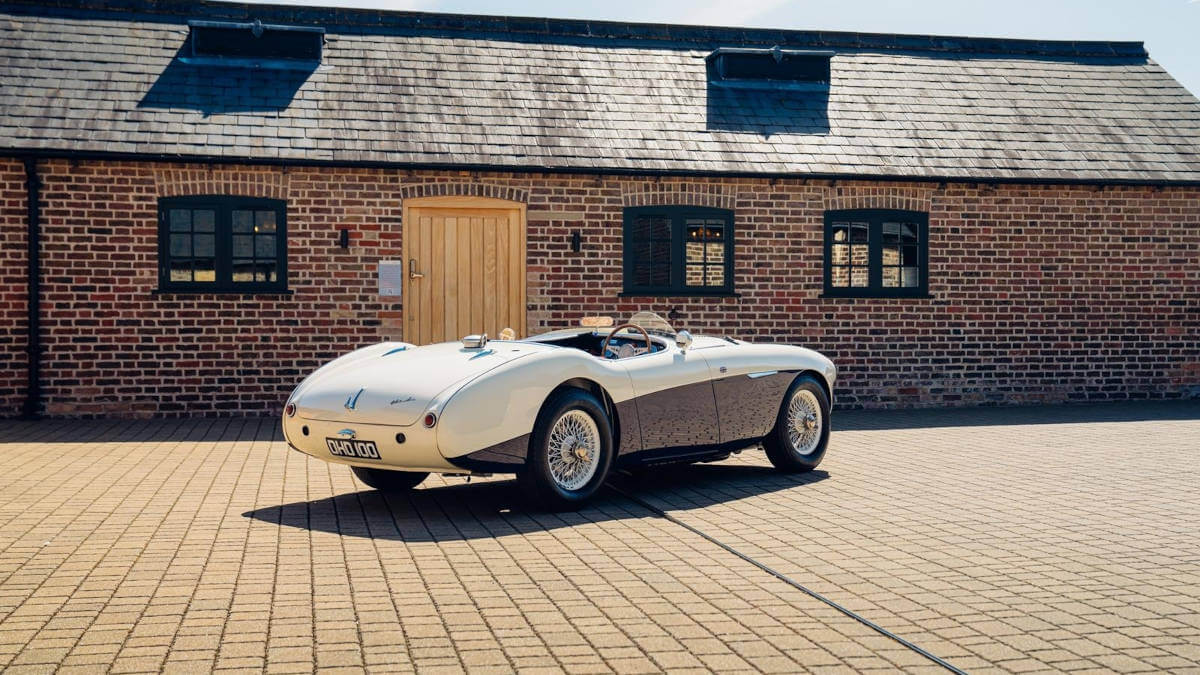 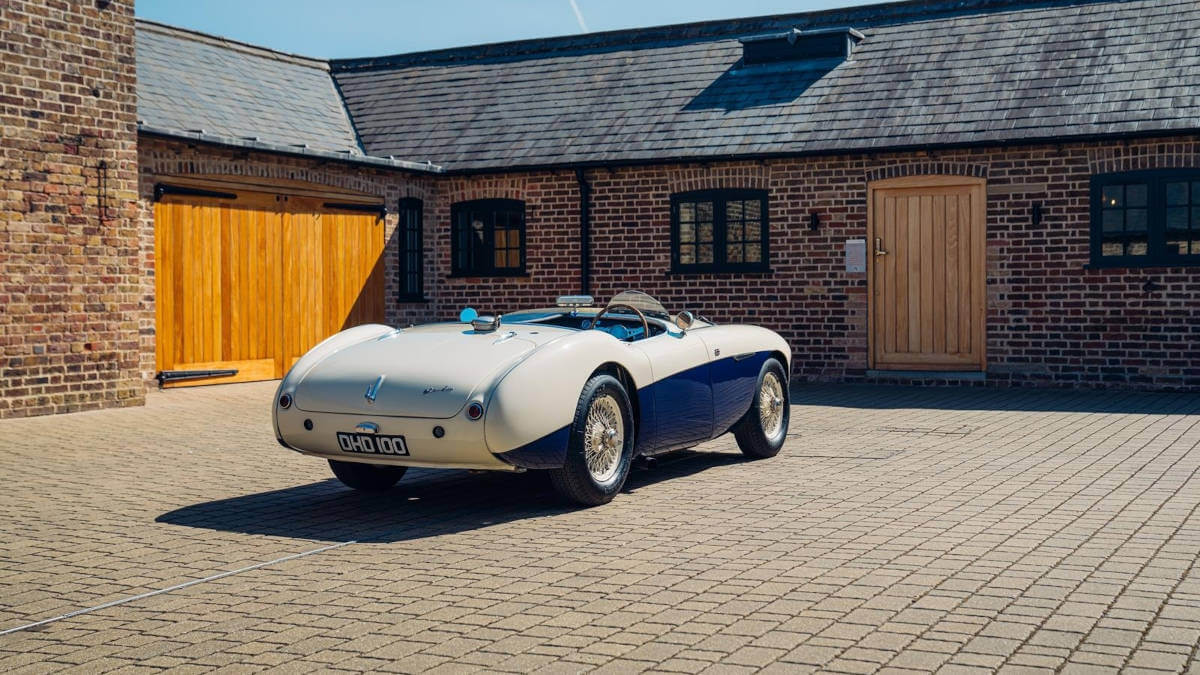 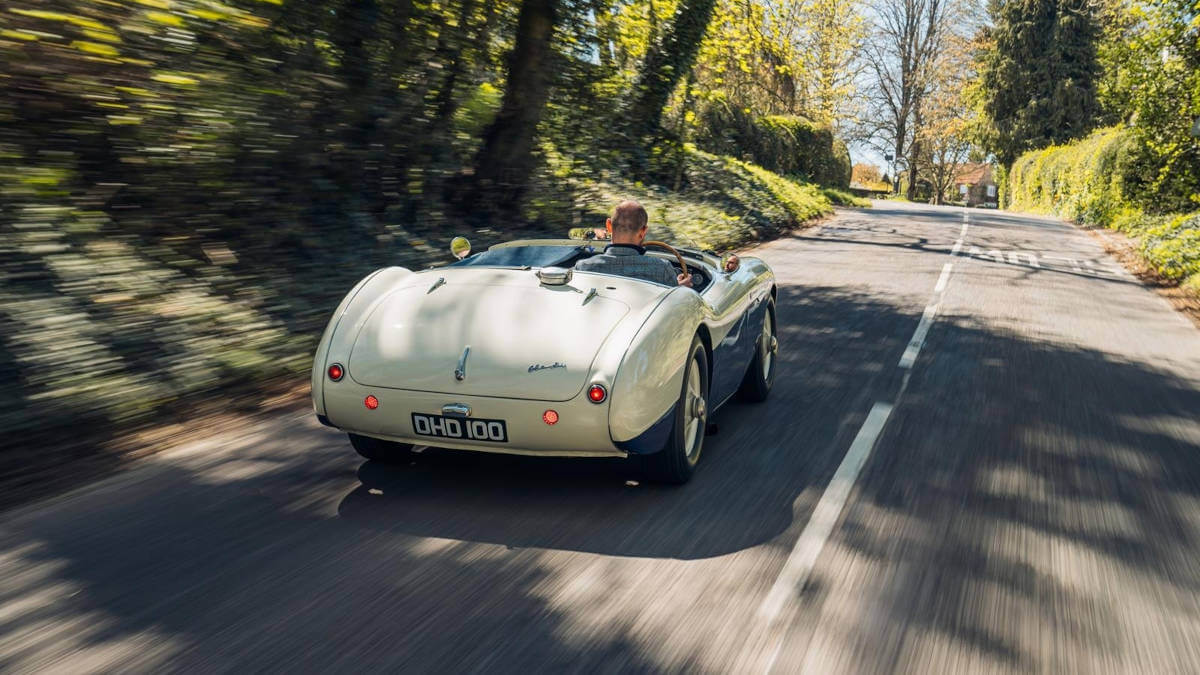 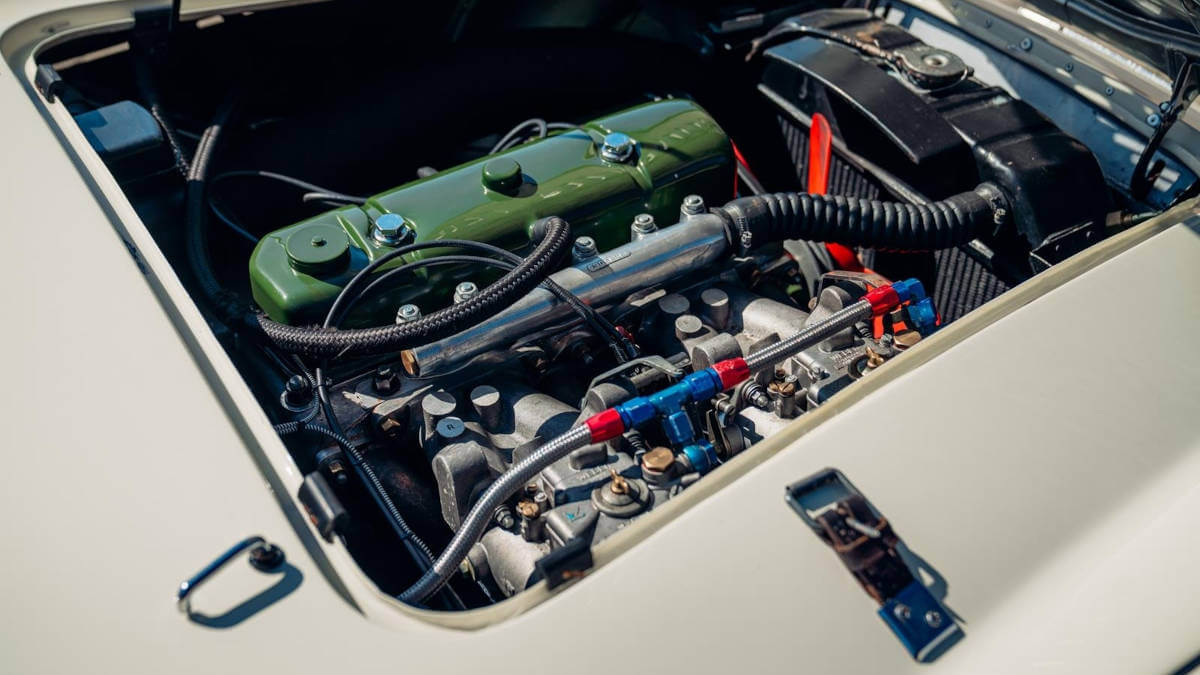 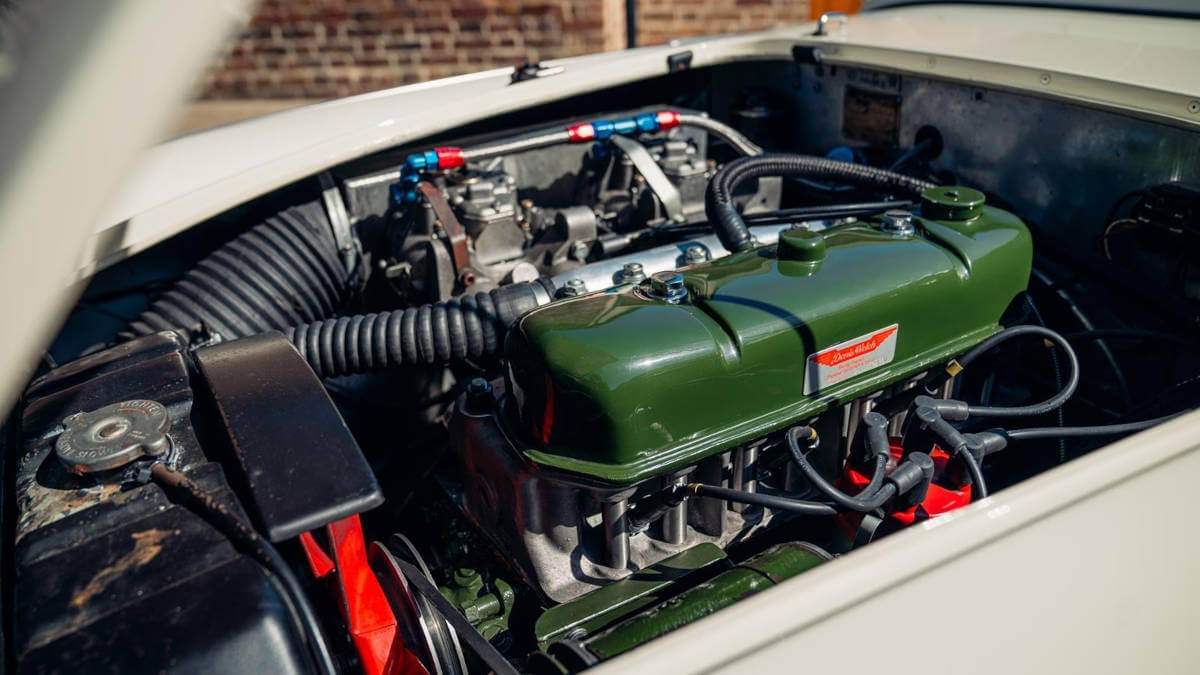 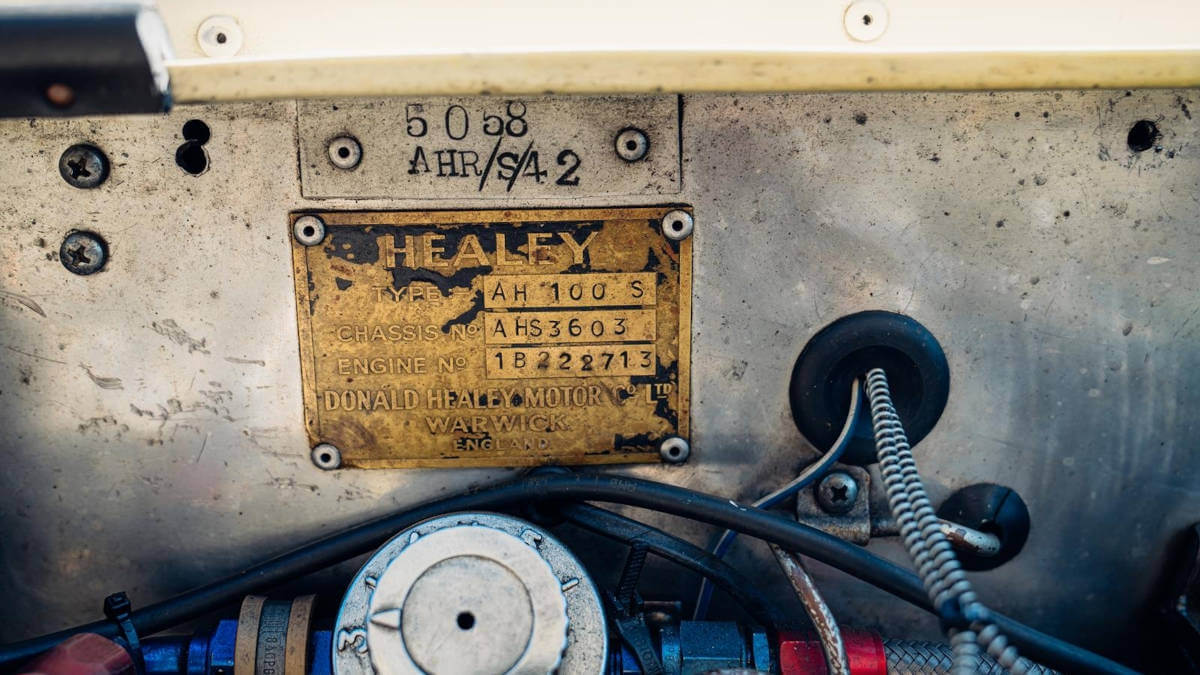 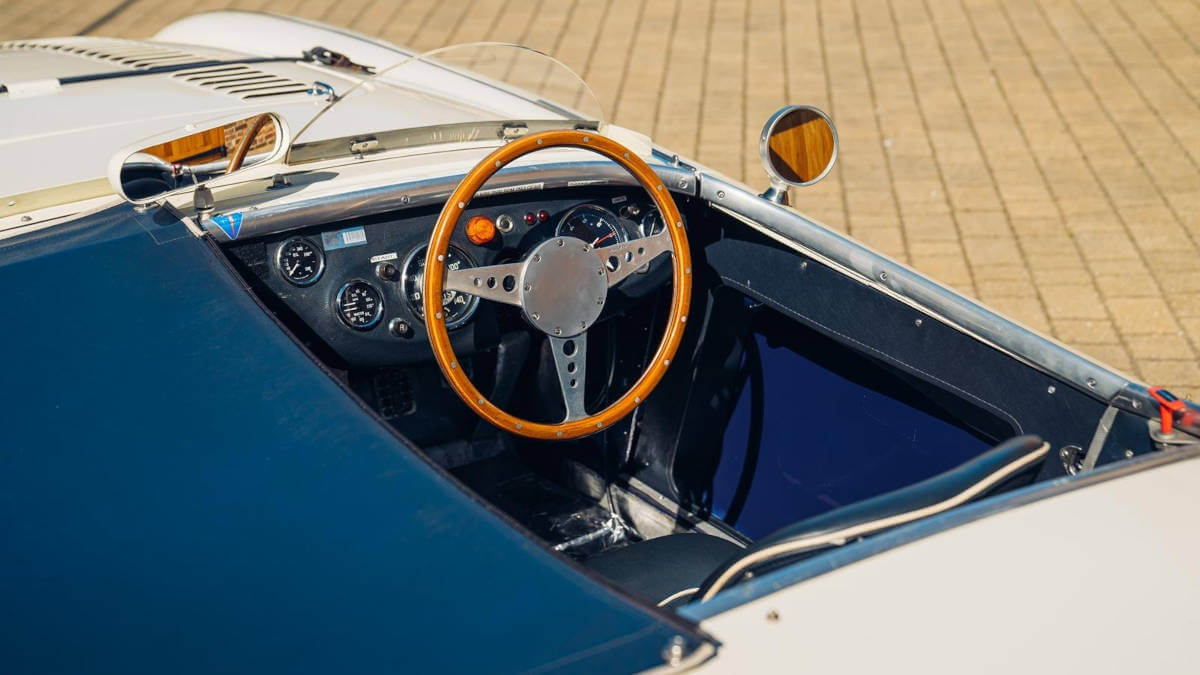 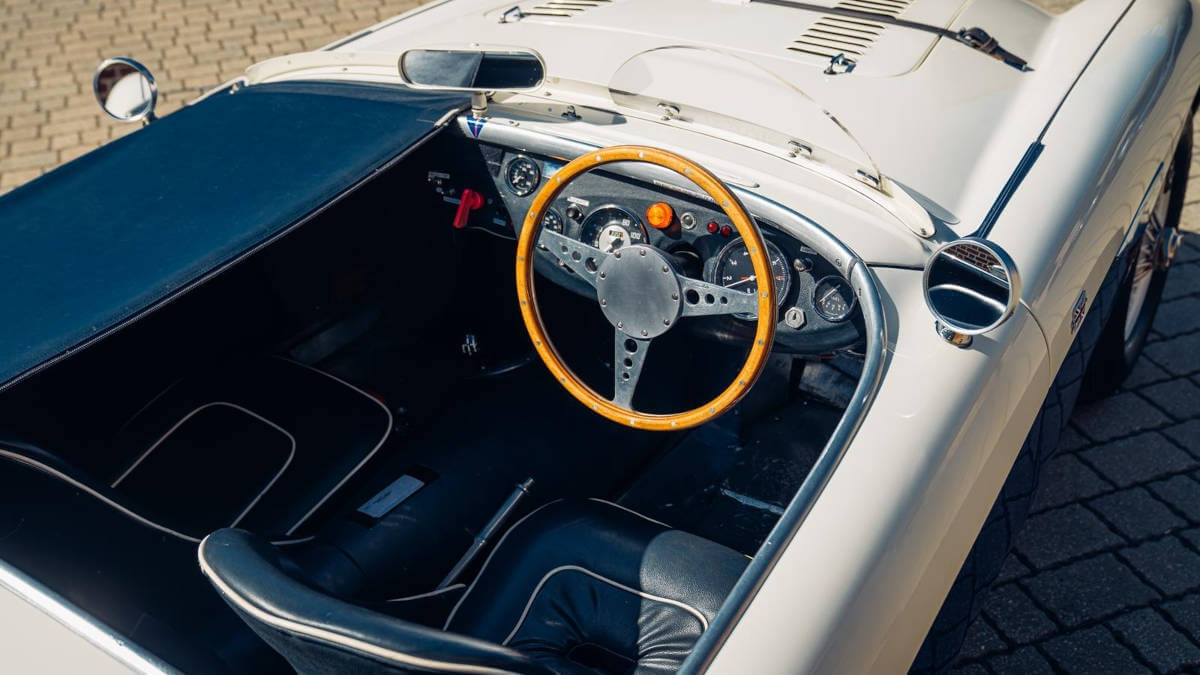 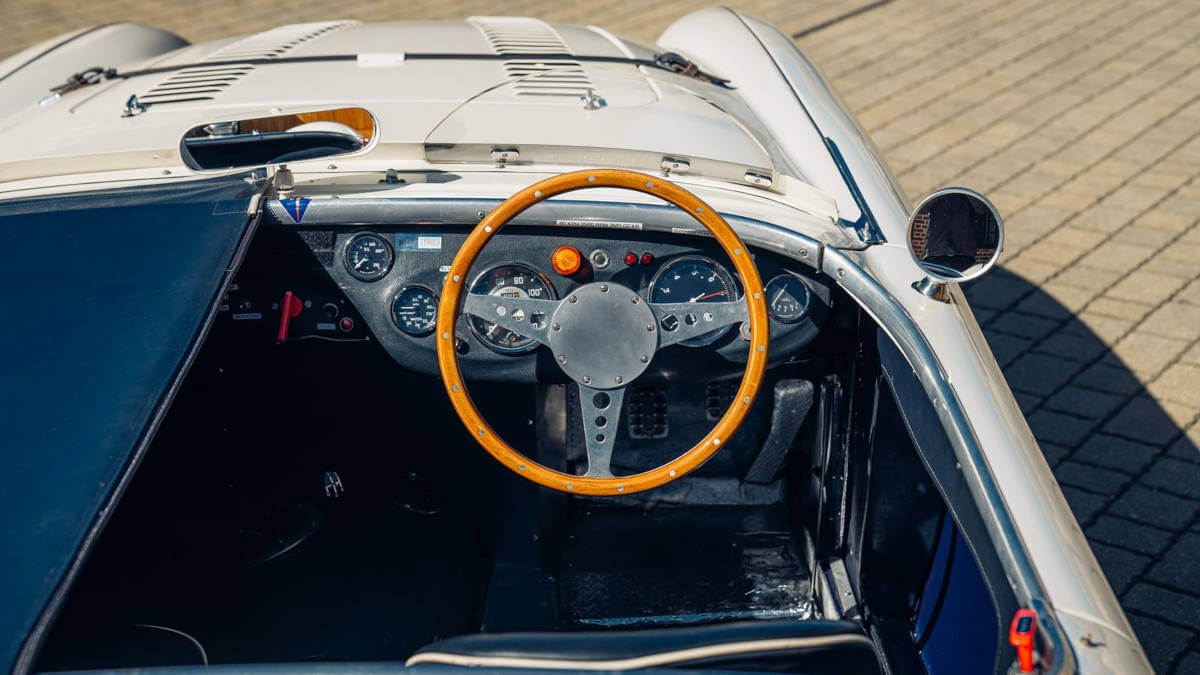 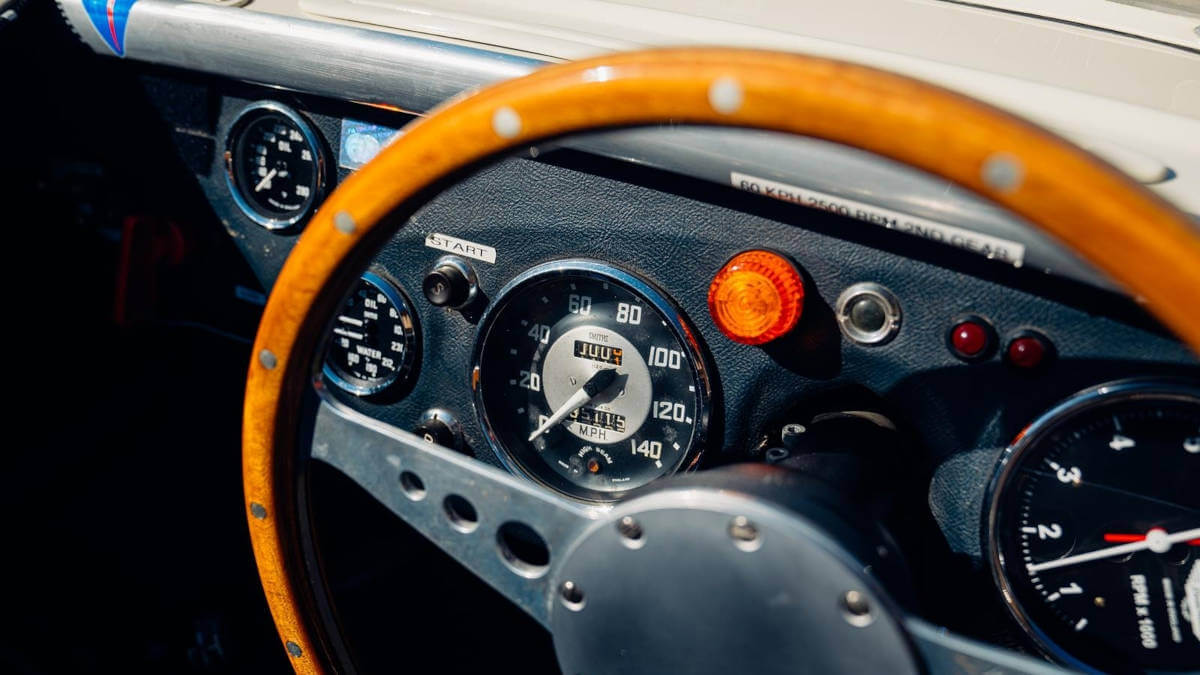 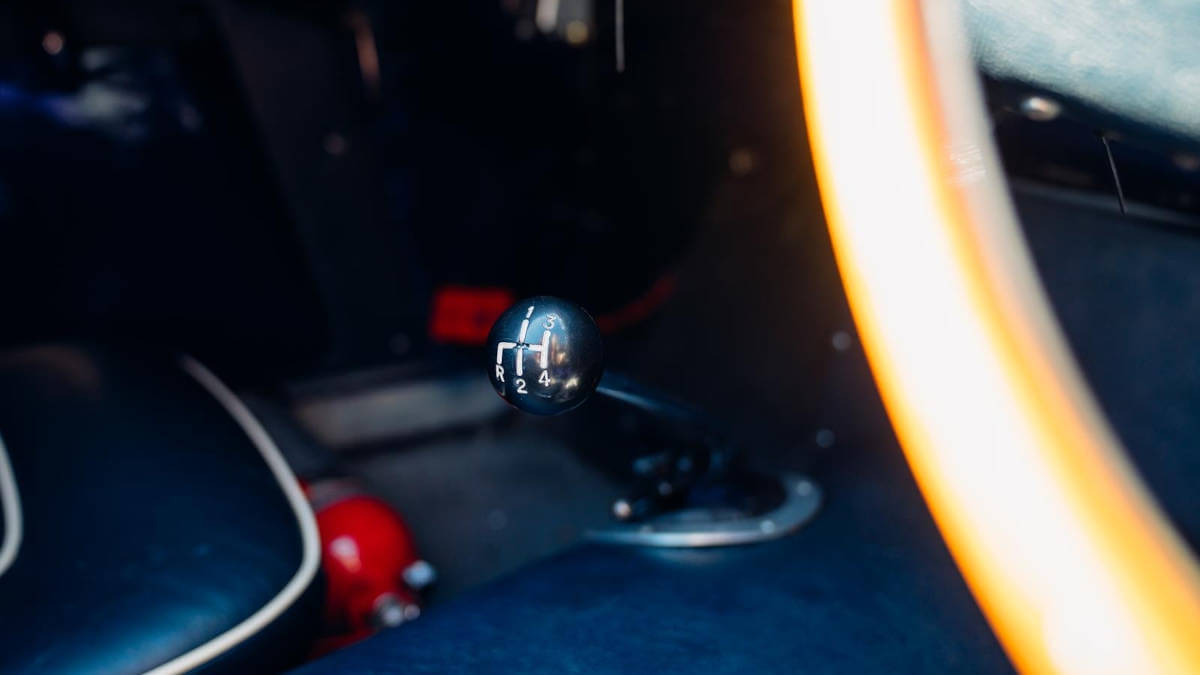 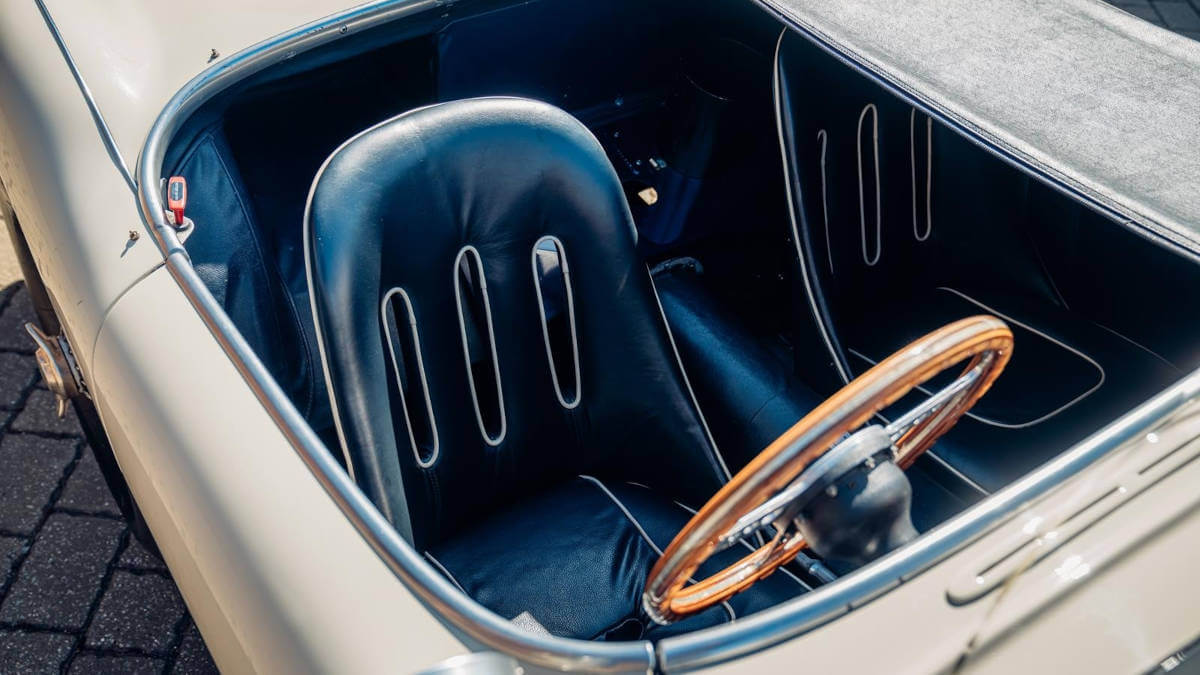 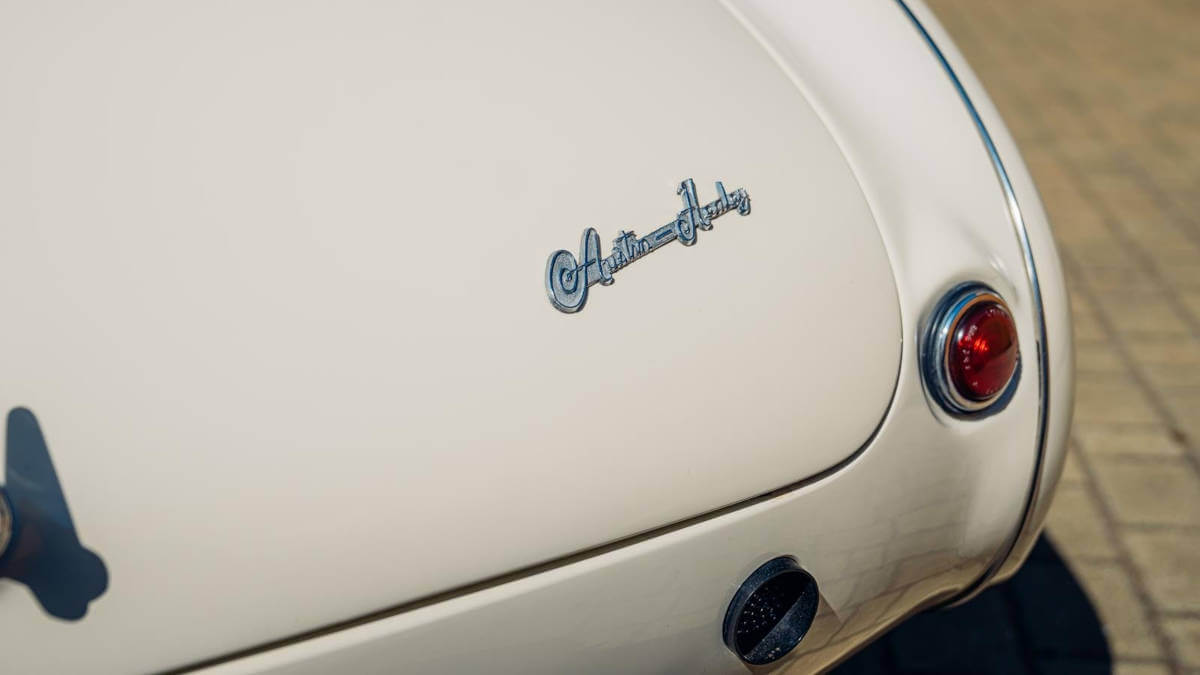 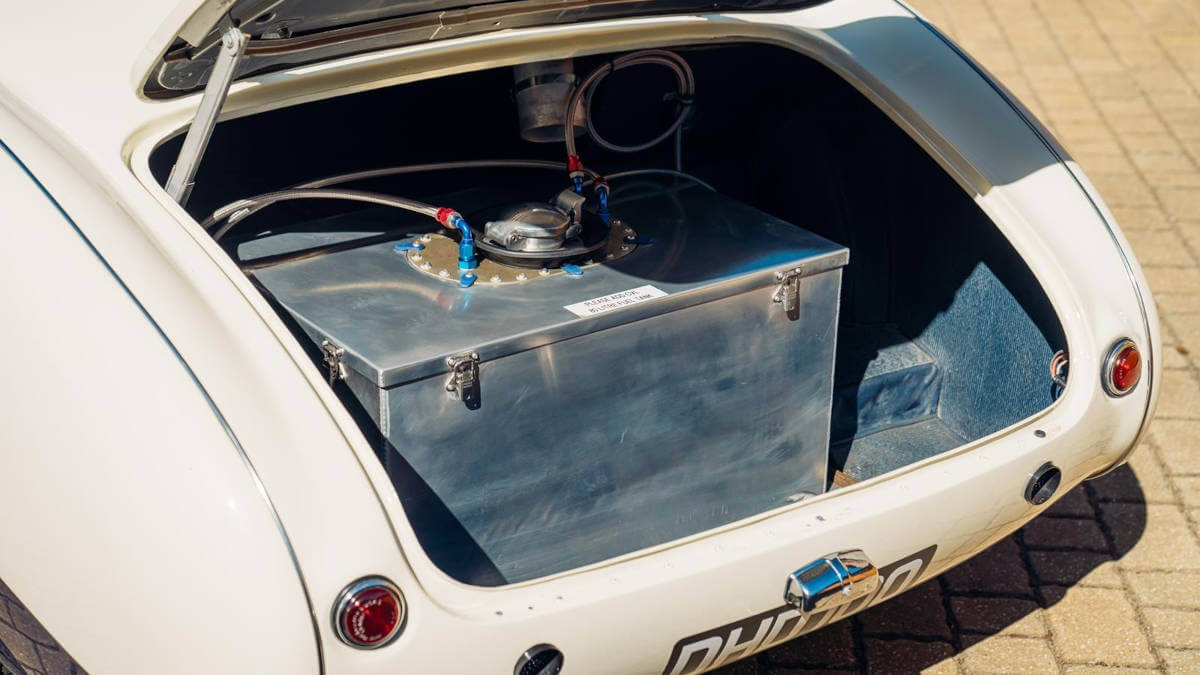 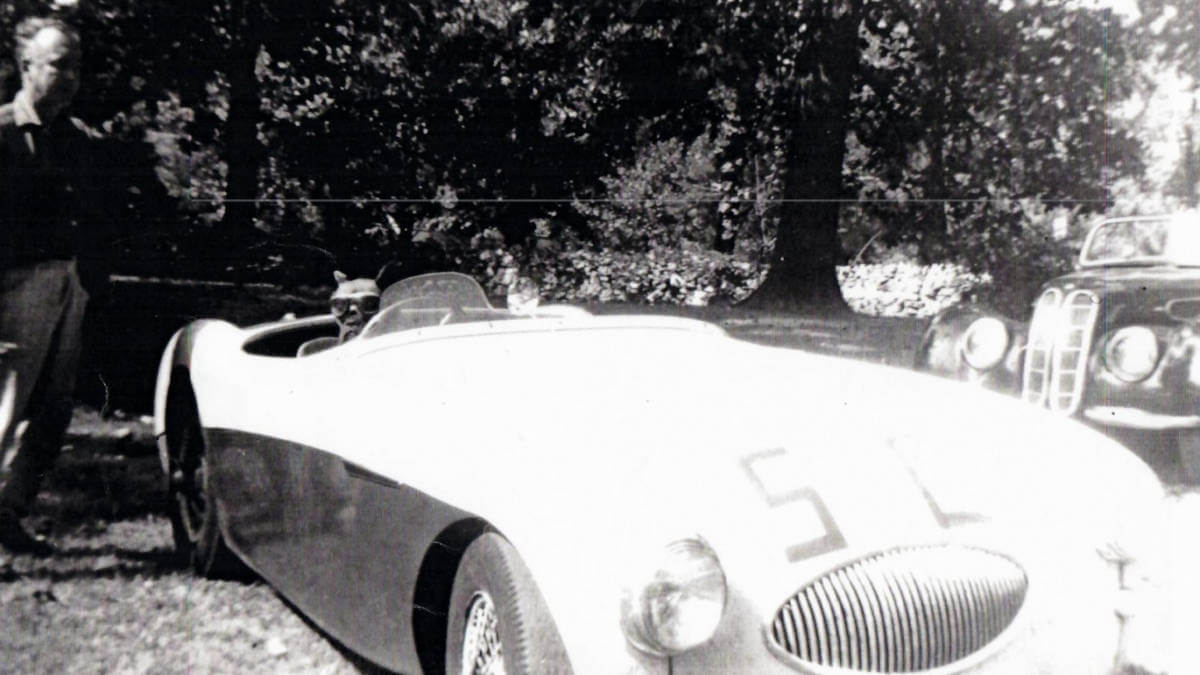 Two and a half years after production began, numerous modifications were made and the car was internally renamed BN2. There was now a four-speed transmission with overdrive and the optional 100 M version with an 82 kW/111 hp engine. This engine was also available as a retrofit. In addition, there was the 100 S. This special model celebrated the surprising third place overall at the 1954 12 Hours of Sebring (hence the ‘S’) and was limited to 55 examples. A rarity among a total of 14,662 Austin-Healey 100s (BN1 and BN2). Five of them remained in the factory racing team, 50 were sold to private customers. Austin-Healey made no secret of the fact that the 100 S was intended for motorsport. For the first time in a production car, disk brakes were used all around. To save 91 kilograms of weight, the body including doors and hoods was made of aluminium. There were no bumpers, nor a soft top. In addition, new SU carburetors and an aluminium cylinder head were used to increase power to 98 kW/133 hp.

AH3603 is for sale at DK Engineering

At classic car dealer DK Engineering in the UK, the Austin-Healey 100 S with chassis number AH3603 is currently for sale. Although this special model was only available with right-hand drive, this example was delivered new to the USA. There, Karl Kopplin from St. Louis bought the sports car and used it in various SCCA races until 1958, when he sold it to Munro Roberts. Roberts raced the car further until the cylinder head broke. Thus damaged, the car went to the Nelson Brothers, who carefully implanted a Corvette V8 engine to the original four-speed transmission. The rebuilt car continued to race until 1963. Another decade later, Harry Nelson sold it to Alan Jones in Australia, who raced it frequently in classic races until his death in 1999. It was then restored by marque expert Steve Pike, including a retrofit to a correct 100 S powerplant.

AH3603 then returned to the US, competed in two vintage races, and subsequently was shown in a museum. It wasn’t until 2007 that a collector from the UK was able to purchase the 100 S and bring it back home. There, a second, smaller restoration was carried out by Denis Welch Motorsport. In the course of this work, all hidden body numbers proved to be correct. A rare S-engine was also working under the hood, but for this very reason it was removed and exchanged for a specially rebuilt racing engine. The removed engine, however, remains with the car and is also now offered by the current owner, who took over the Austin-Healey in 2014. As a buyer, you can look forward to a sports car that is a joy to drive both on the road and at racing events such as the Goodwood Revival, the Mille Miglia or the Oldtimer Grand Prix.