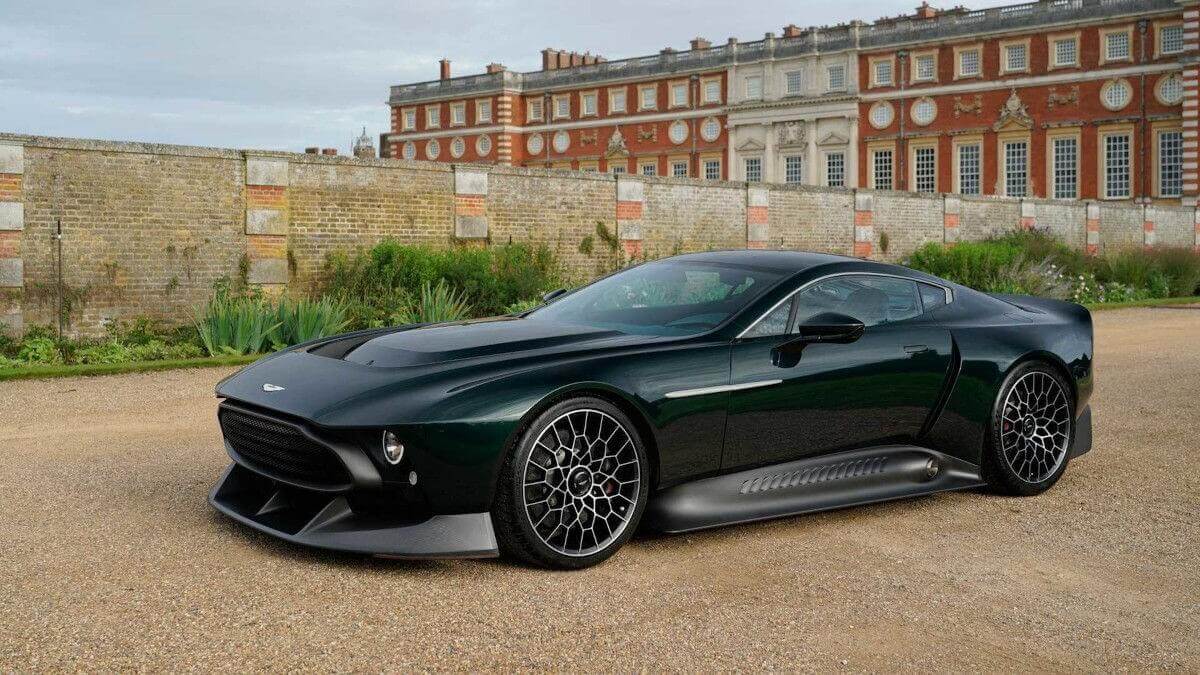 It doesn’t often happen that visitors to an automotive beauty contest stand speechless in front of a car. However, last weekend exactly this happened in London at the Concours of Elegance. The reason? Q by Aston Martin used this event to present to the public for the first time a one-off vehicle that had been created on behalf of a customer. The department within the Aston Martin plant, which actually specializes in customizing new series sports cars, is therefore now also recommended for upcoming special orders from VIP customers with sufficient financial resources. A replacement chassis including rear subframe for the supercar One-77, which was produced in 2011 in a small series of just 77 units, was uses as the basis. Like this monocoque, the completely redesigned body is made of carbon fiber. Using exact computer calculations, it wasn’t only possible to increase the downforce to 824 kilograms at high speed, but also to lower the total weight compared to the One-77. In comparison: the Vantage GT4 racecar has ‘only’ 525 kilograms of downforce.

At the request of the anonymous buyer, the Aston Martin design department drew a body with various quotes from the classic V8 Vantage of the 1970s and 80s. RHAM/1 in particular played a major role in the design process. This is a DBS V8, which was developed at the end of the 1970s under the then Executive Chairman Victor Gauntlett for participation in the 24-hour race in Le Mans with Robin Hamilton’s racing team. In 1977 and 1979 the car actually started the race. However, only the rough silhouette and the shapes of headlights and taillights remained of the original road vehicle. Instead, there were huge widenings and a lowered roof. Now, with this one-off car, this mighty V8 racing car is being set aside as a memorial as is the company boss of the time. The unique road car was given the simple name Victor. 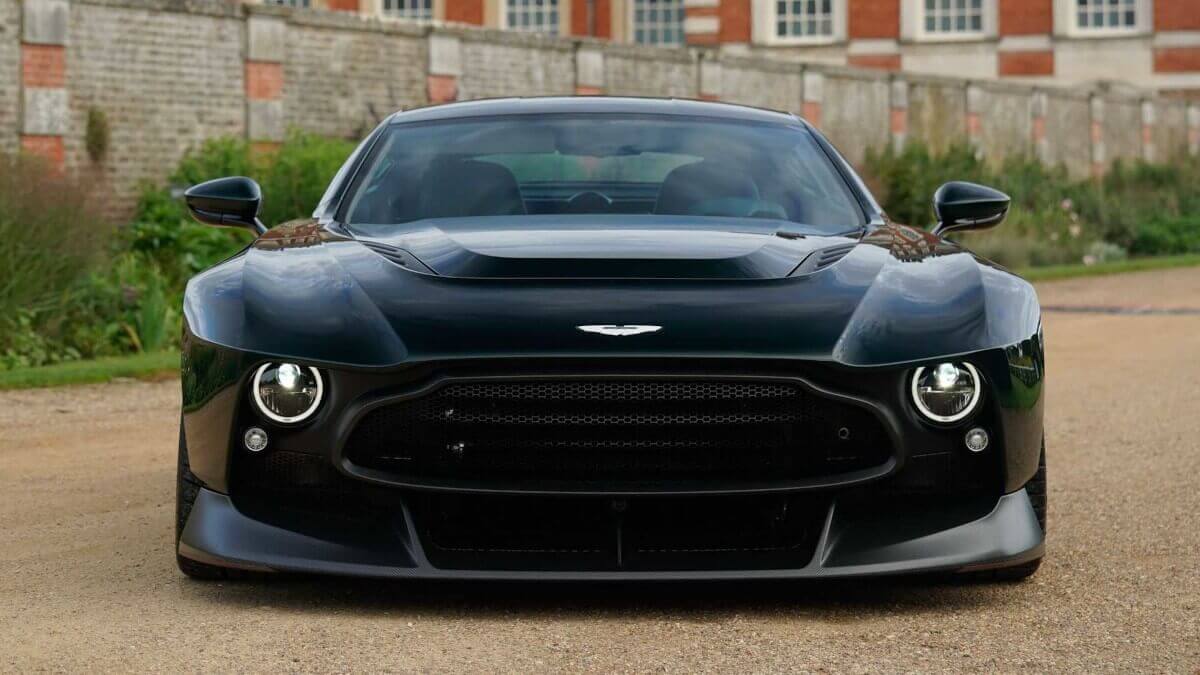 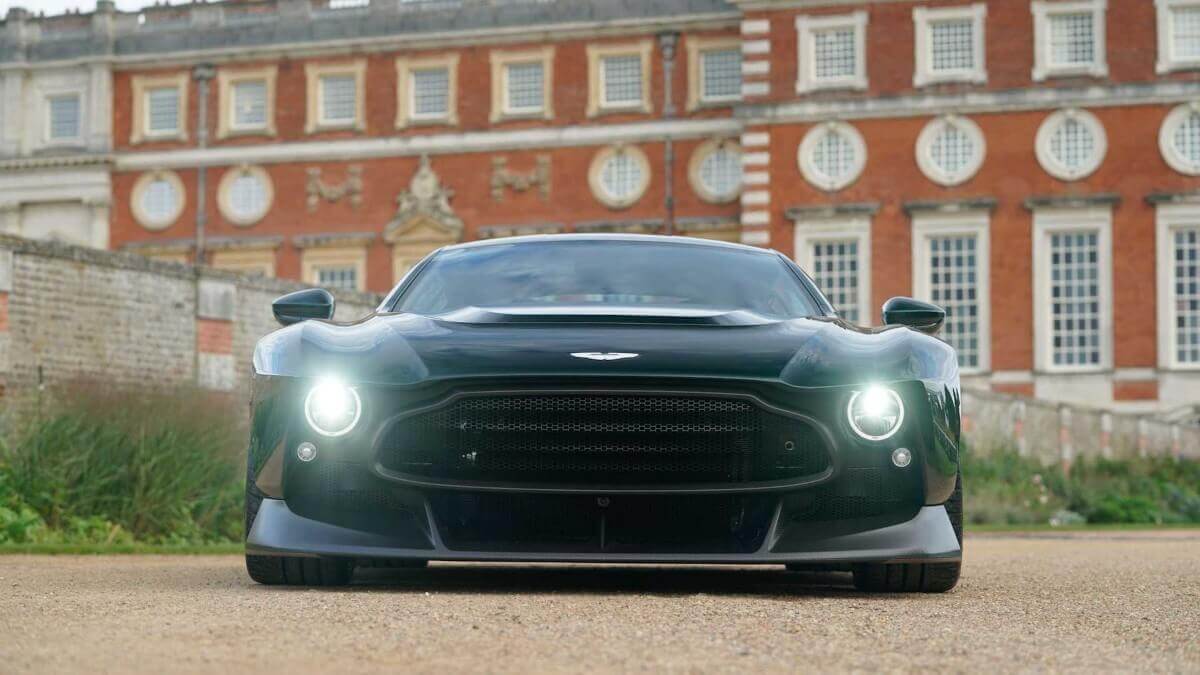 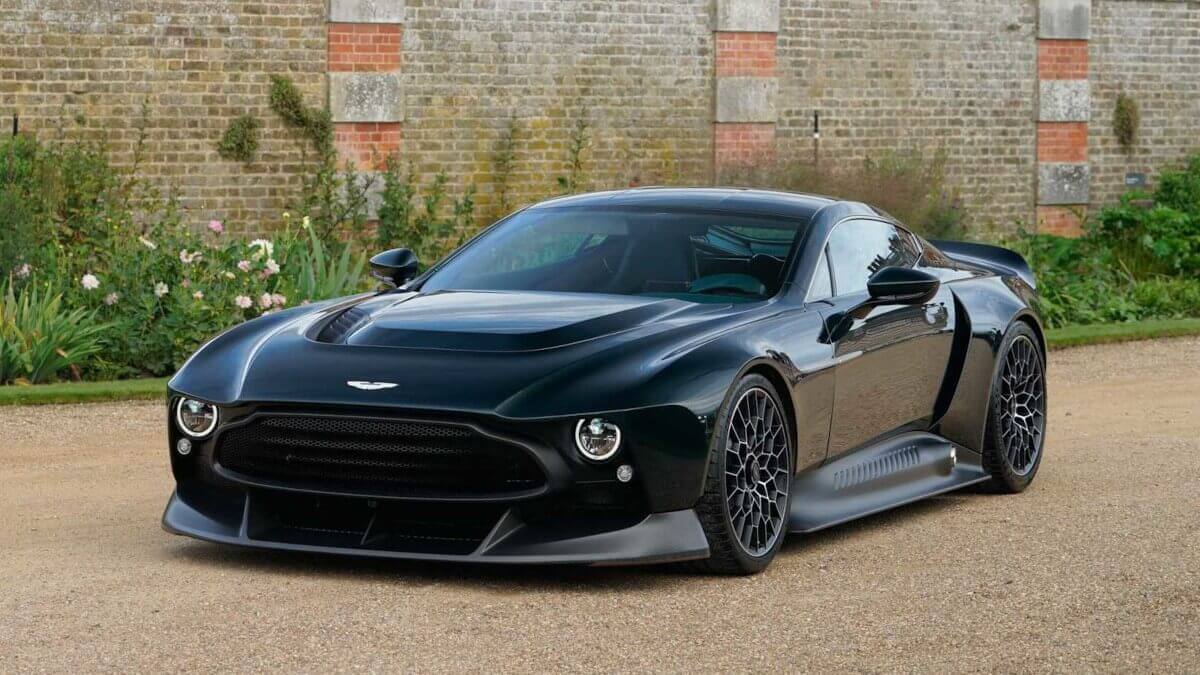 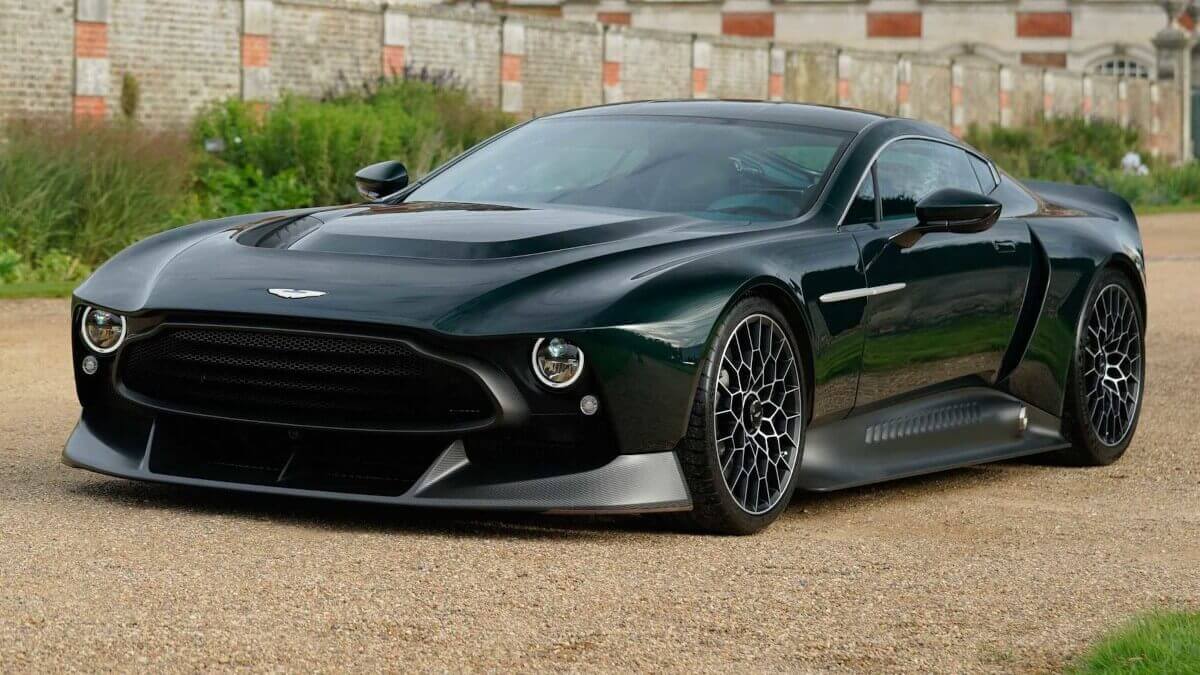 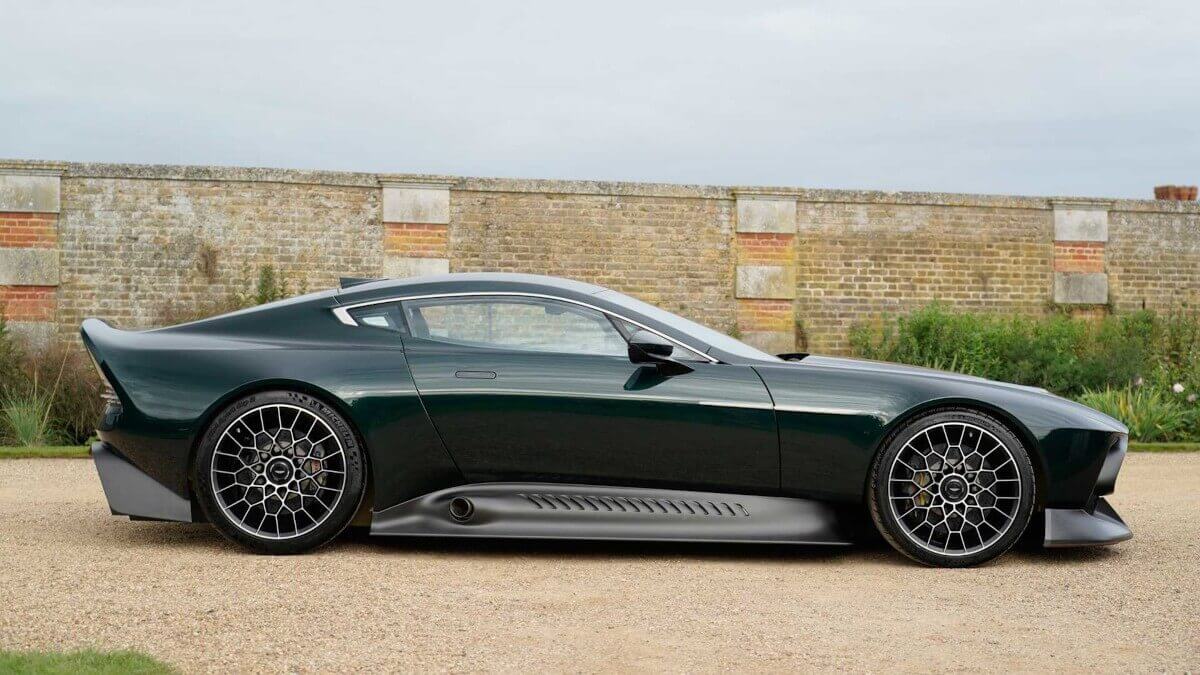 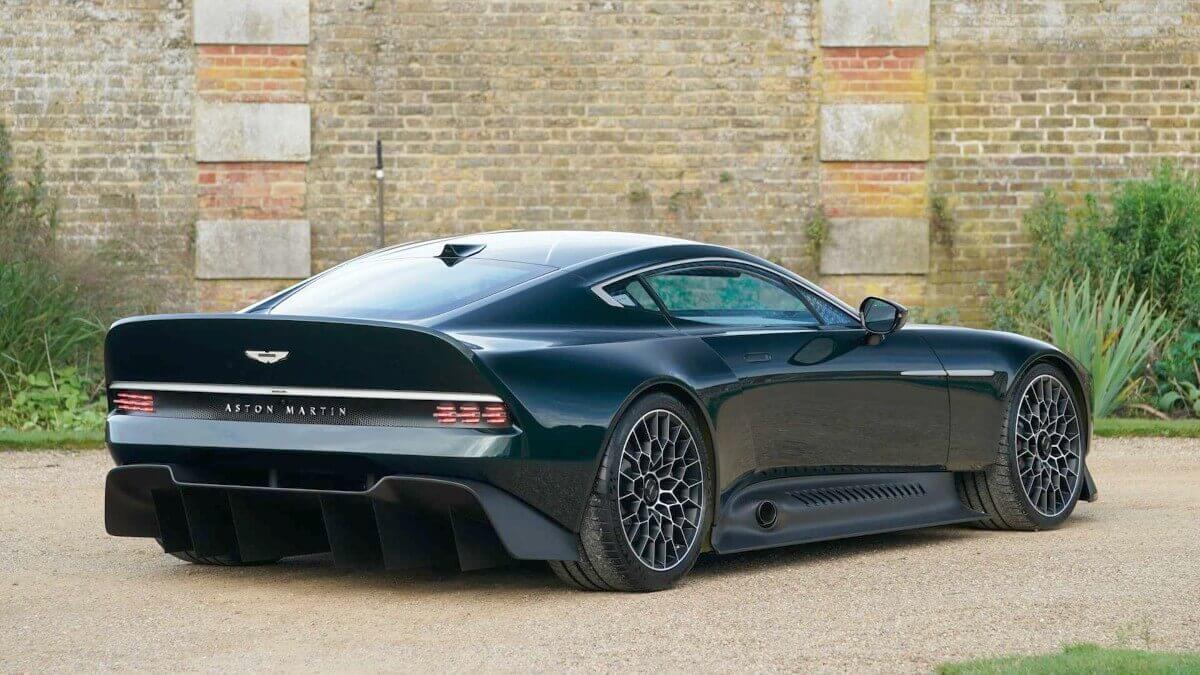 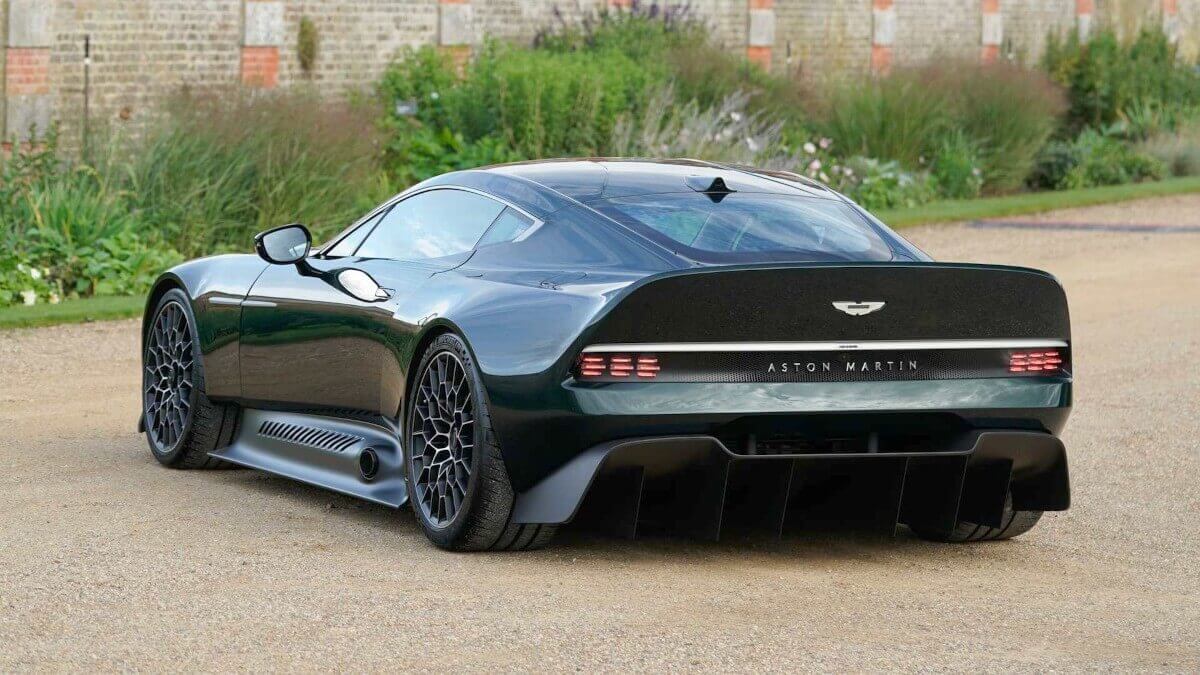 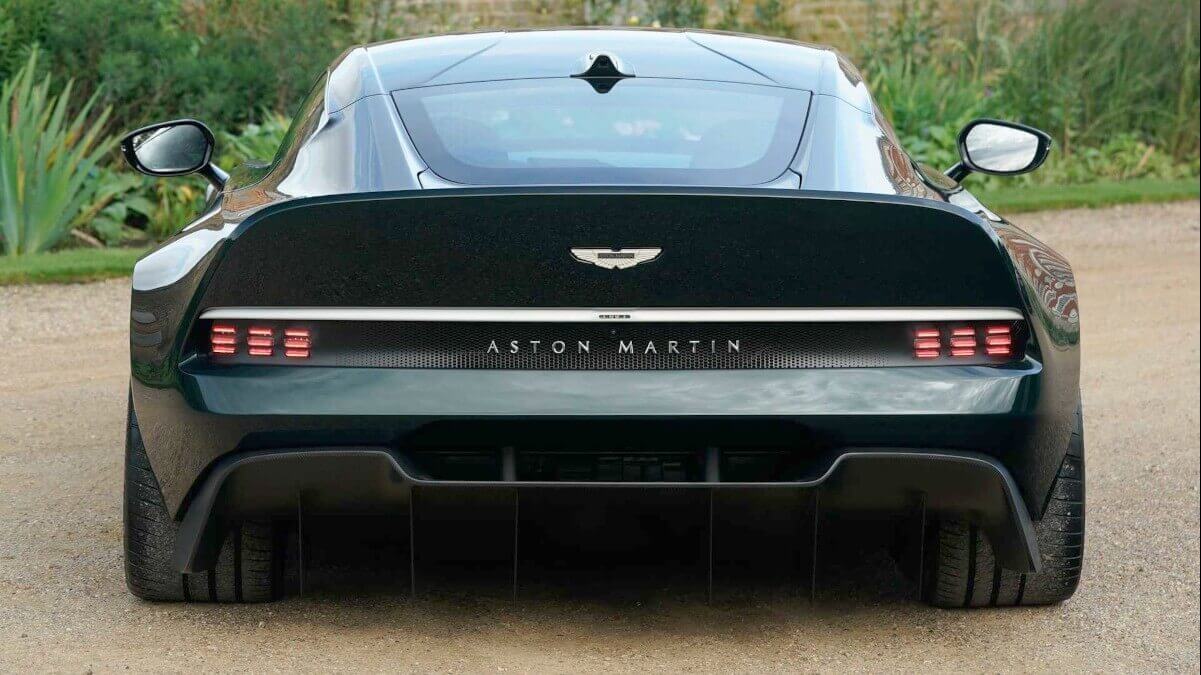 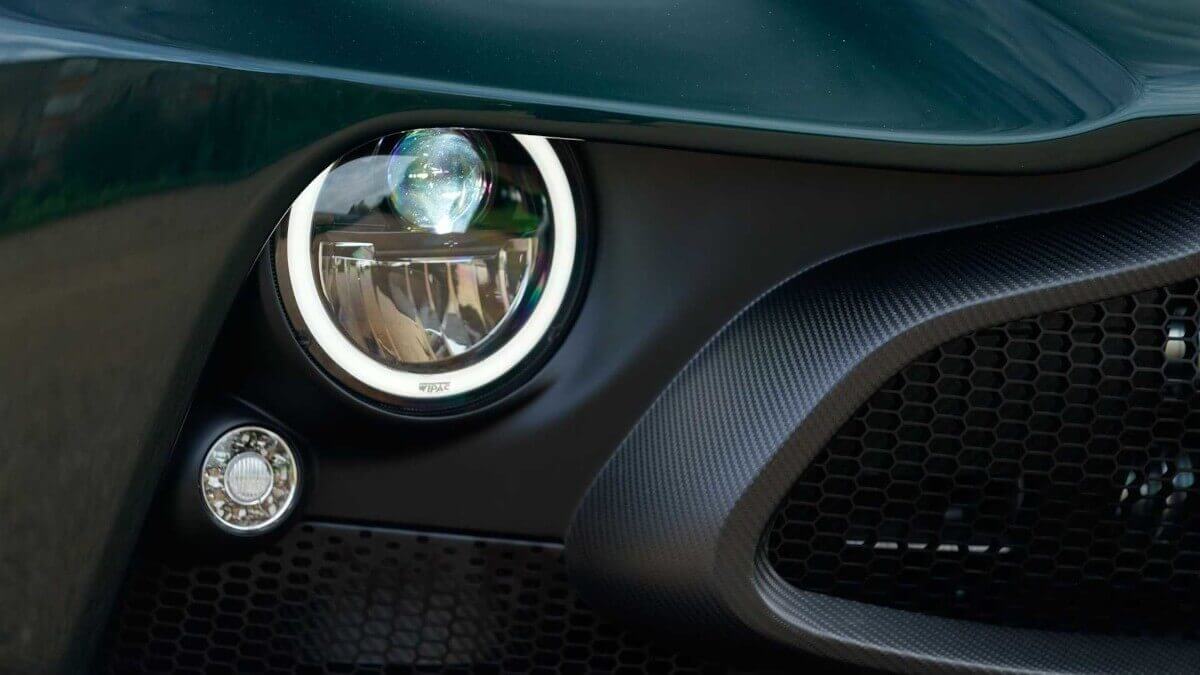 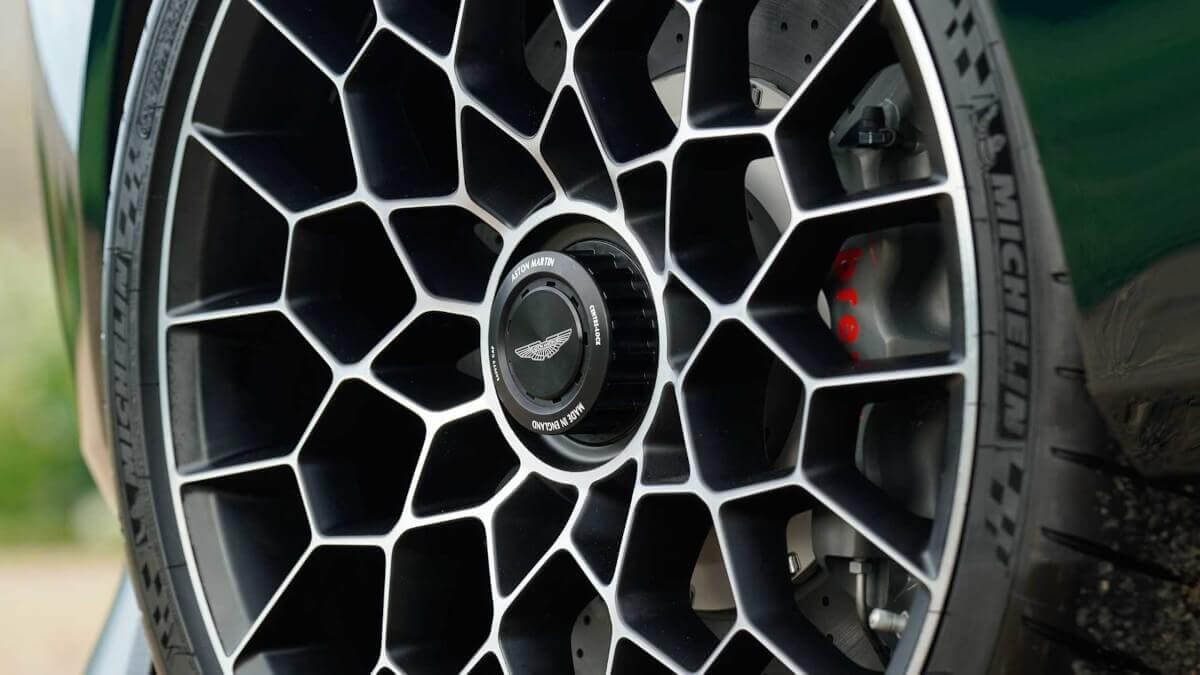 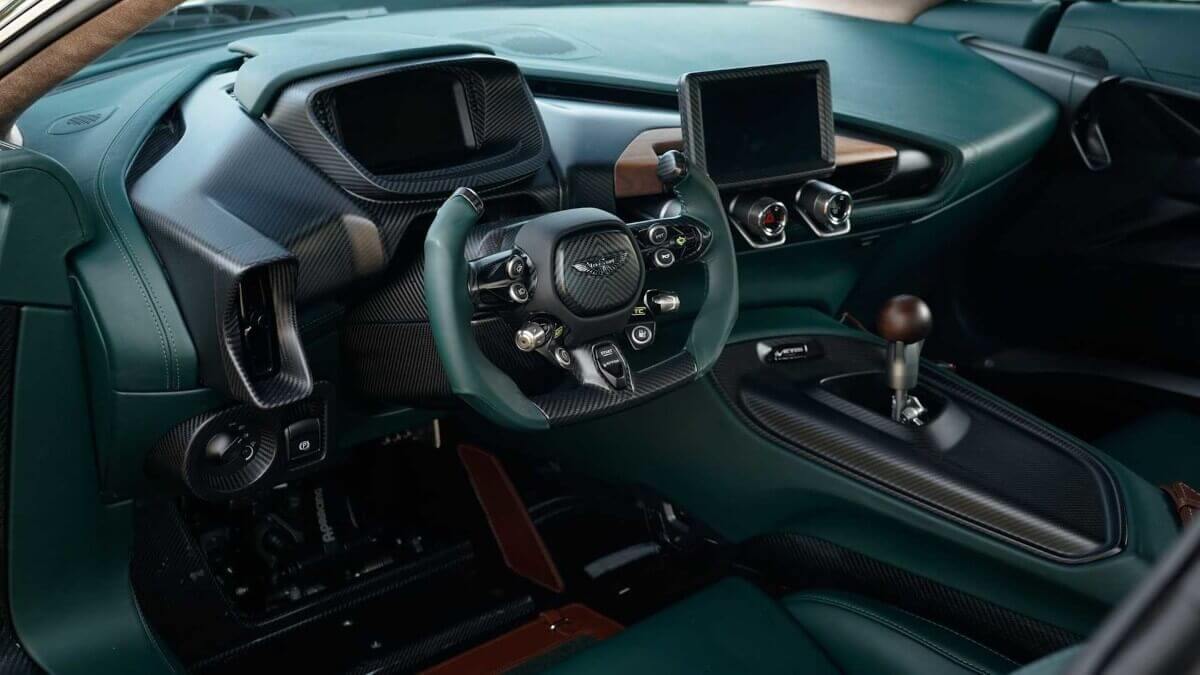 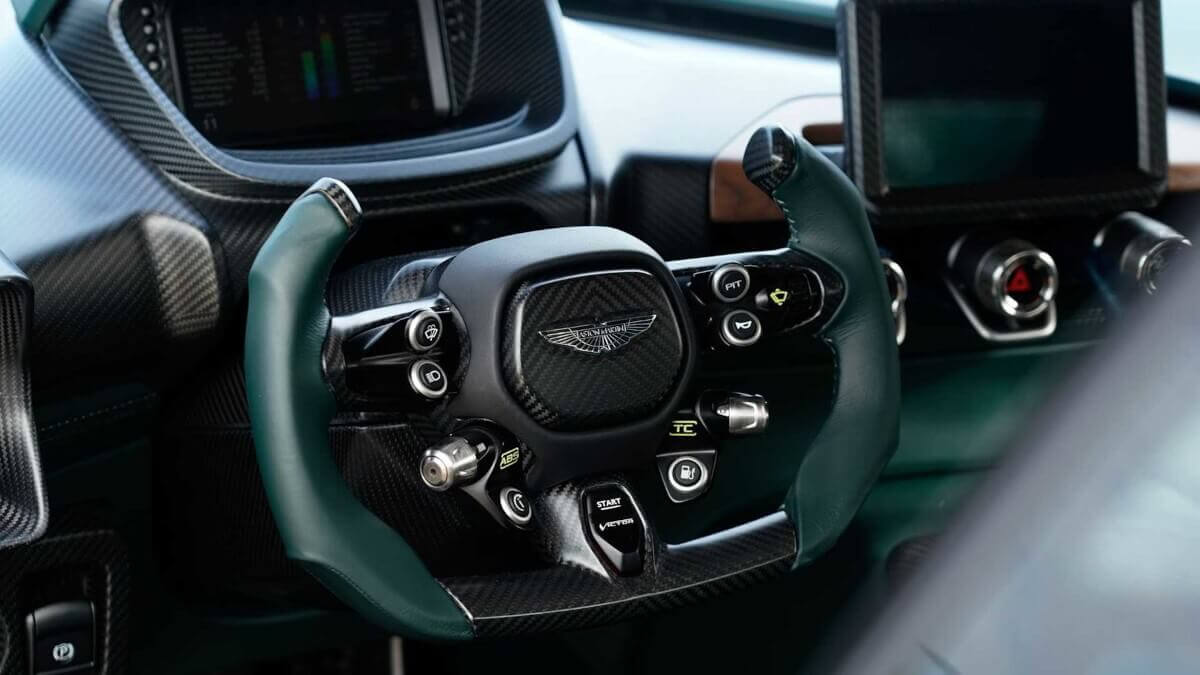 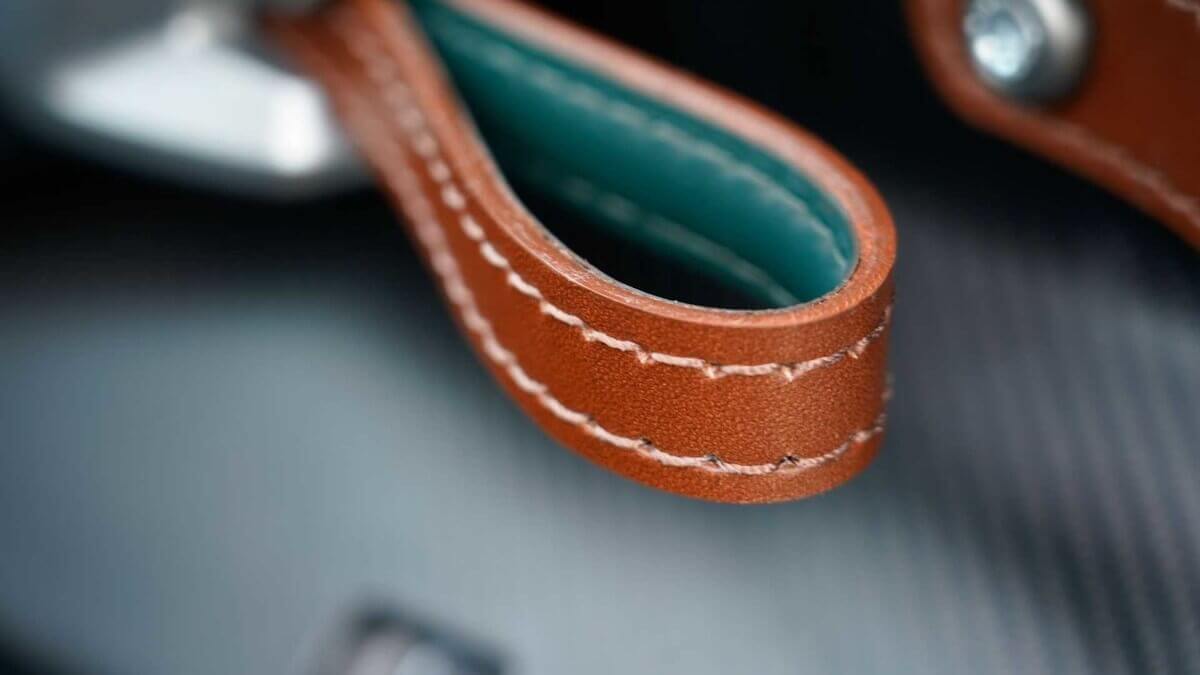 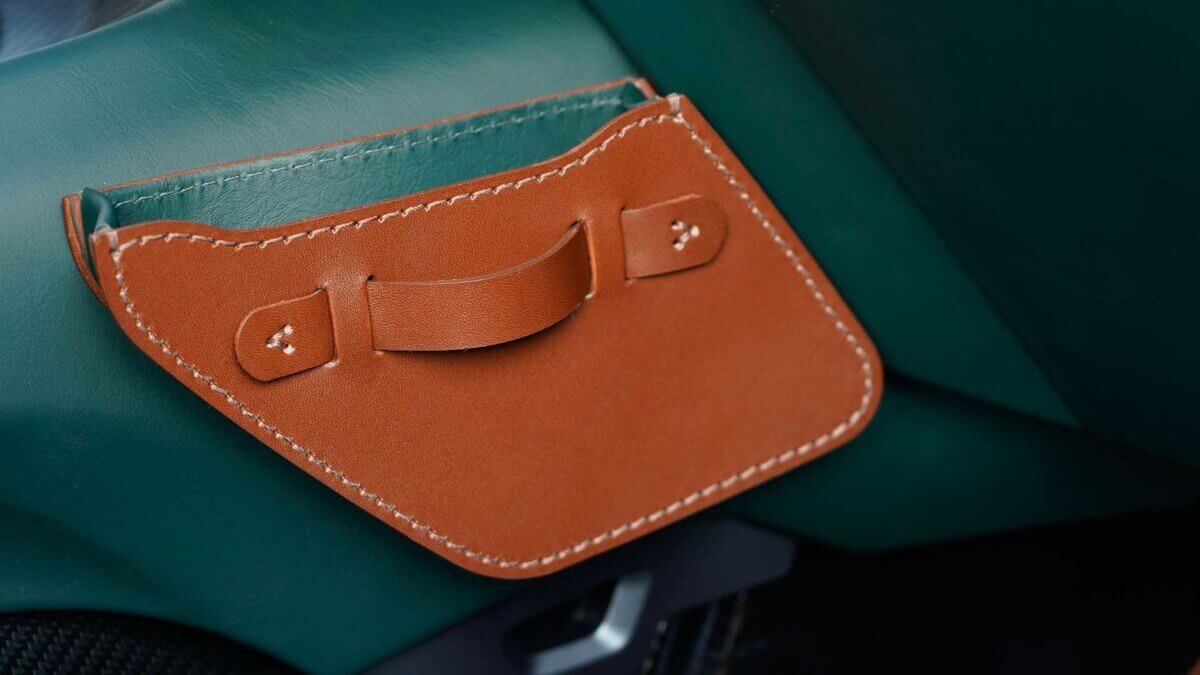 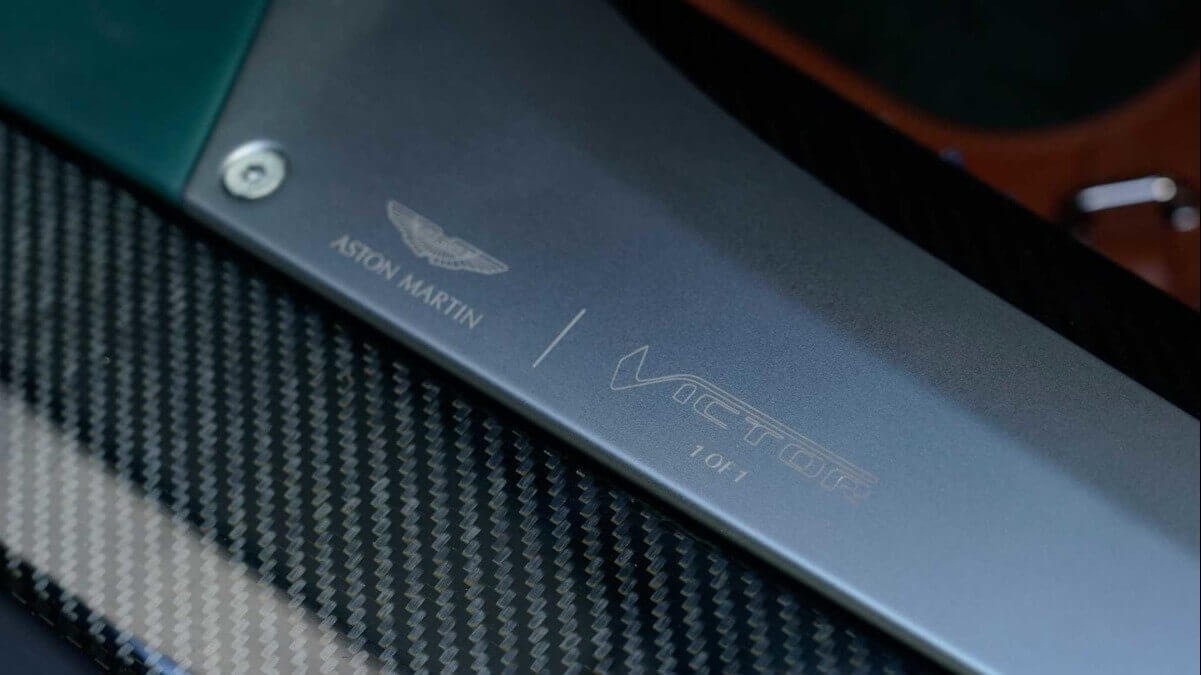 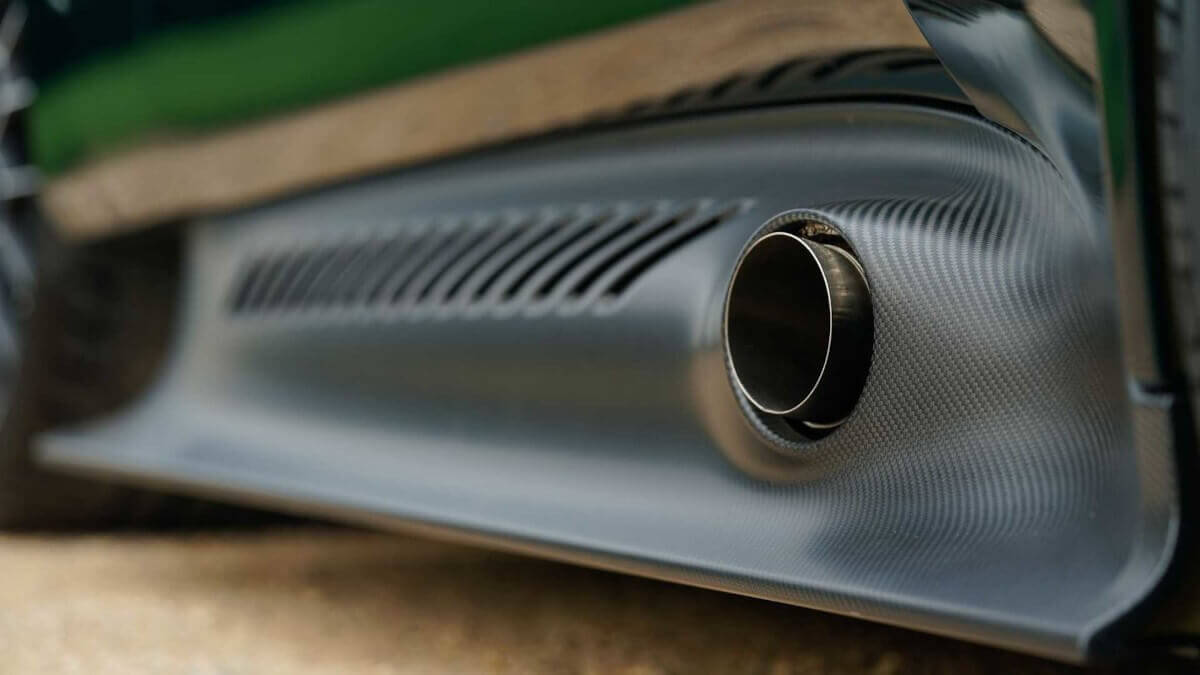 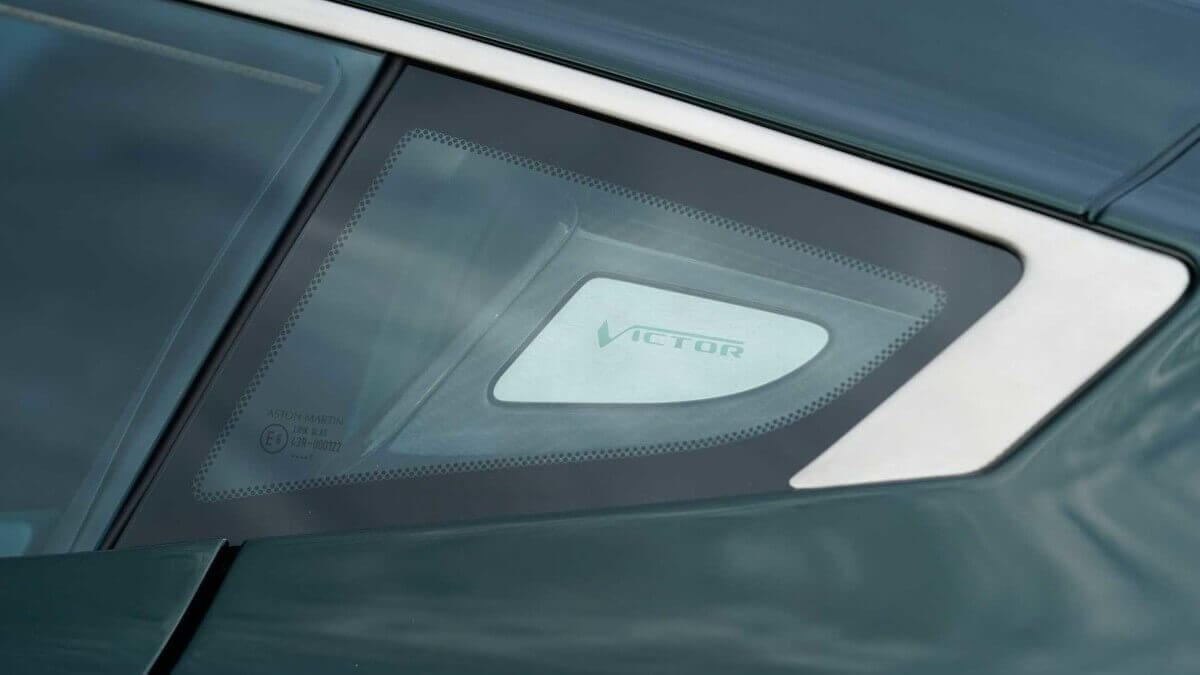 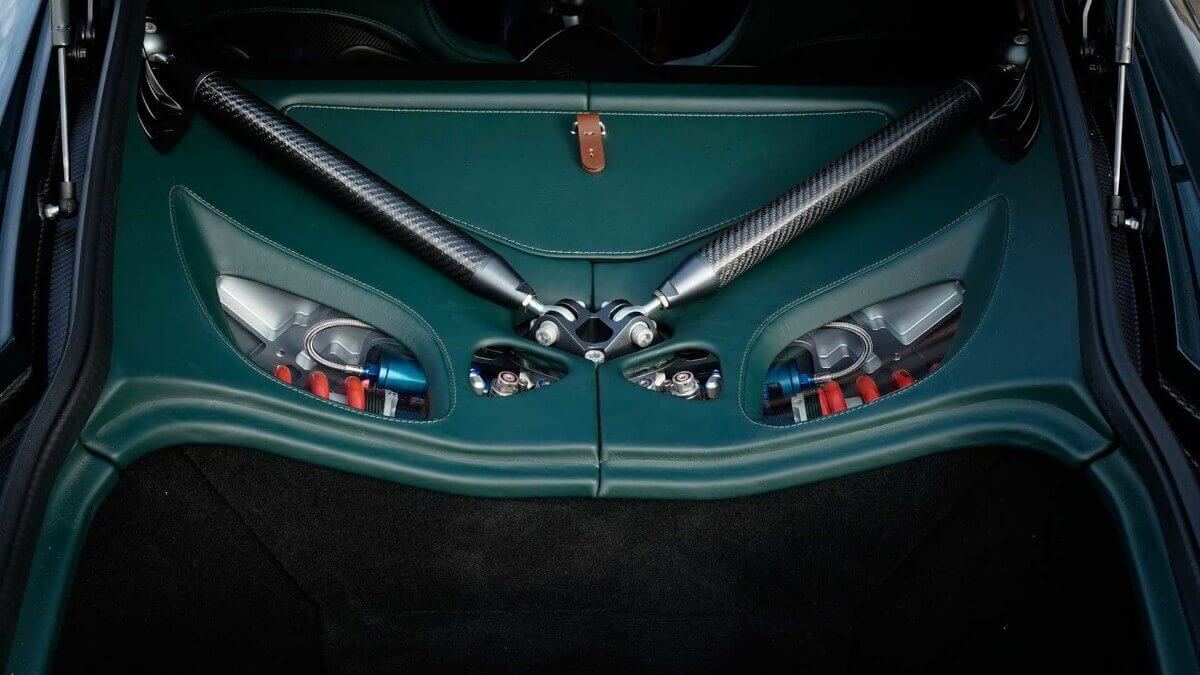 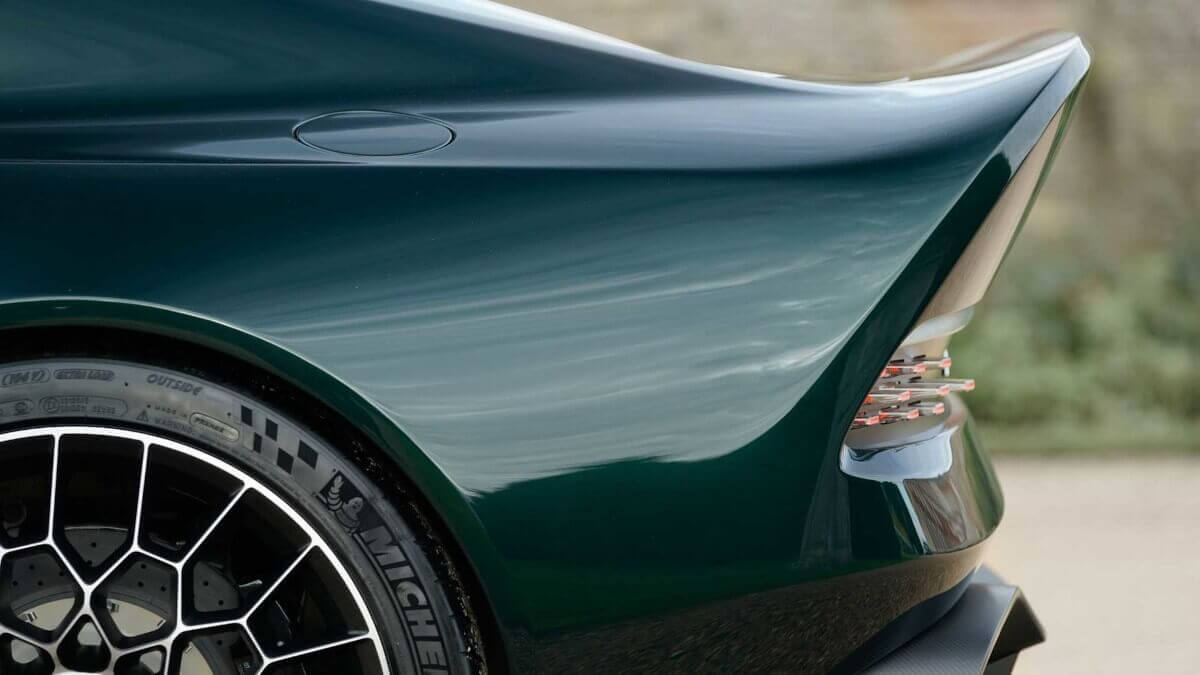 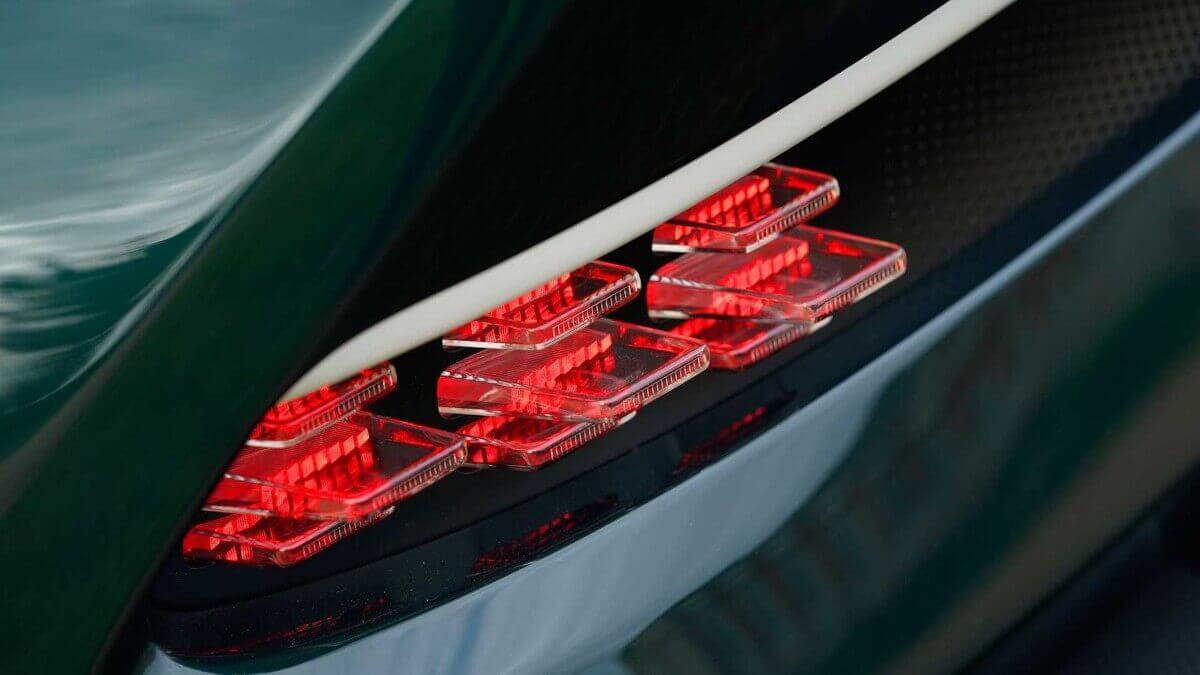 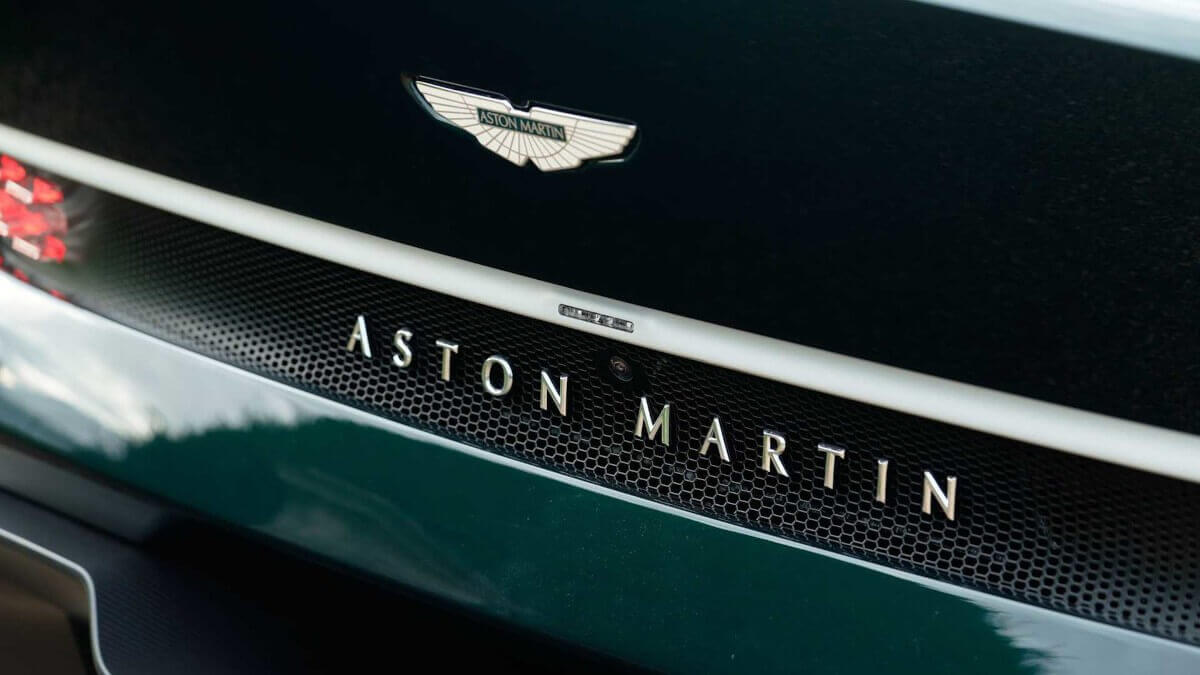 A wonderful deep dark green paint, called ‘Pentland Green’, adorns the body of the Aston Martin Victor in combination with a few details in matt carbon fiber. These mainly focus on the lower third of the body and thus include the most important aerodynamic components, such as the front splitter, the side skirts and the huge diffuser at the rear. Above the rear lights borrowed from the Valkyrie, a wide and relatively high spoiler is seamlessly integrated into the rear end of the Victor.

In addition, there are organically designed alloy wheels with central locks, a huge Brembo brake system with carbon ceramic discs and exhaust tailpipes below the doors. To match the exterior, the interior has the finest Bridge of Weir leather in the colors ‘Forest Green’ and ‘Conker’, the second color being reserved for exclusive details such as a map bag on the transmission tunnel or some leather belts. Light beige cashmere fabric is used to cover the headliner, anodized aluminium and machine-polished titanium for switches and fine walnut wood for the gearshift lever and little trim on the dashboard. In many places you can also take a look at the carbon of the monocoque. An open-top racing steering wheel from the Aston Martin Vulcan awaits the driver’s hands.

The main features of the 7.3-liter V12 engine also come from the One-77. However, the Q department, together with Cosworth, gave it a unique specification that leads to 623 kW/847 hp and a maximum torque of 821 newtonmeters. The One-77 already had more than impressive 559 kW/760 hp and 750 newtonmeters of torque available. There, however, a six-speed automatic took care of the power transmission to the rear wheels. For the Victor Graziano from Italy specially developed a manual six-speed gearbox. From the Vulcan, Q also took over the internal pushrod suspensions with adjustable dampers, which are preset here for rough road surfaces instead of smooth racetracks.

Aston Martin didn’t provide any information about the purchase price of the Victor. However, it isn’t too much of an exaggeration to assume a seven-figure sum.