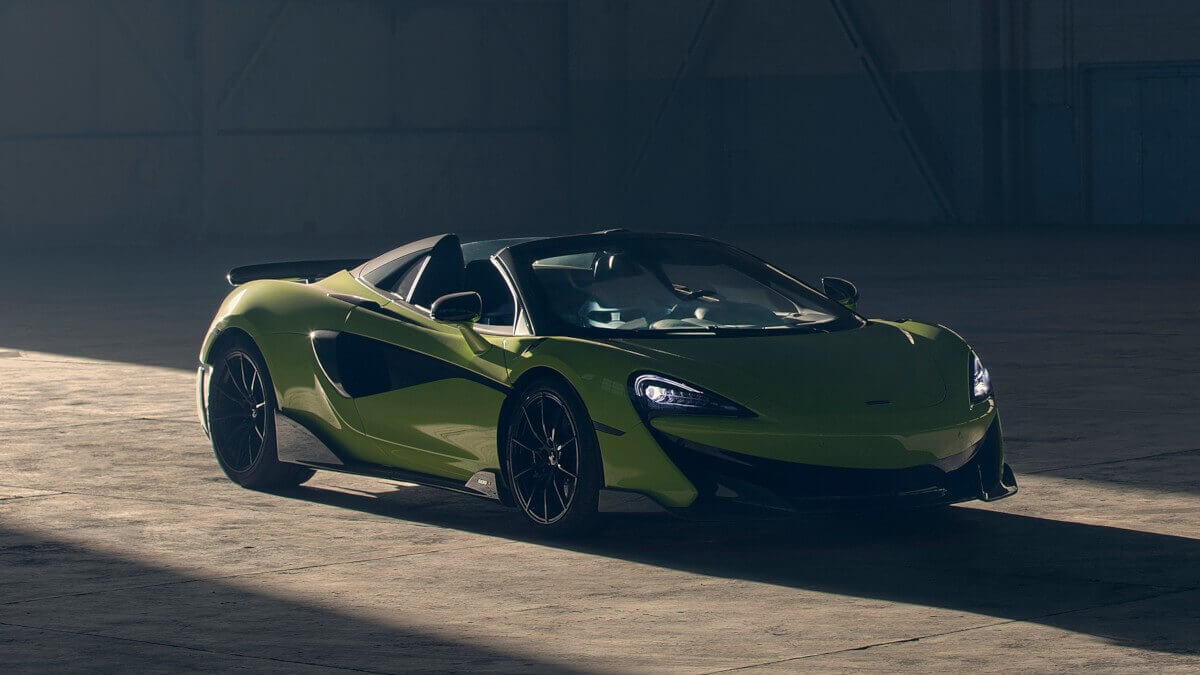 British sports car manufacturer McLaren is now expanding the model range with the 600LT Spider. Like the Coupé, that was already presented at last years Goodwood Festival of Speed, the new model is based on the Sports Series (540C, 570S and 570GT), but shows as fundamentally overworked as its closed counterpart. In the best tradition of the LT models from McLaren, which began in 1997 with the legendary, just ten-time built F1 GTR Longtail, the British brand also put the focus for the 600LT Spider on racetrack use. Next to technical and aerodynamic improvements, another focus laid on weight reduction.

Compared to the 570S Spider, the new McLaren 600LT Spider weighs a whopping 100 kilograms less and therefore has a dry weight of only 1,297 kg. This makes it only 50 kilograms heavier than its closed brother – a merit of the MonoCell II carbon chassis, which allowed the development engineers to dispense with the additional body stiffeners required in other open vehicles. Nevertheless, the 600LT Spider is on the very high level of the Coupé in terms of structural strength, but also offers the charm of the retractable hardtop. While the stiff chassis provides the same dynamics of the Coupé, especially on the racetrack, the low weight gain ensures identical performance. McLaren lists acceleration times of 2.9 seconds from standstill to 100 kph (62 mph) and 8.4 seconds to 200 kph (124 mph), which is only 0.2 seconds slower than the Coupé. Topspeed with closed roof is 324 kph (201 mph). When the roof is open, stronger turbulences mean that at 315 kph (195.7 mph) air resistance, driving resistance and engine power equal each other out. Driver and front passenger can really enjoy the sound and acoustic variations of the top exit exhaust system, which releases the exhaust gases from the hood upwards comparable to older Formula 1 cars, while driving with open roof. This special exhaust arrangements ensures that McLaren’s revised V8 biturbo engine, already known from the Coupé, delivers a maximum output of 600 hp, while the maximum torque is 620 newtonmeters. Power is transmitted via a seven-speed dualclutch gearbox to the rear wheels. 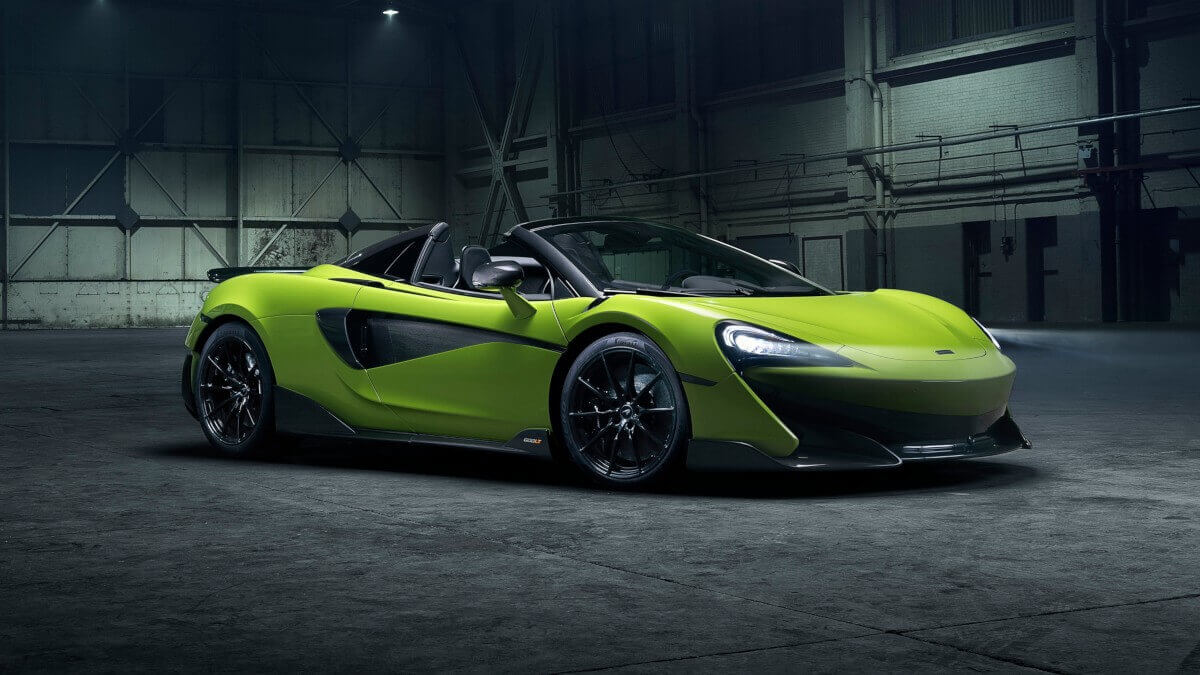 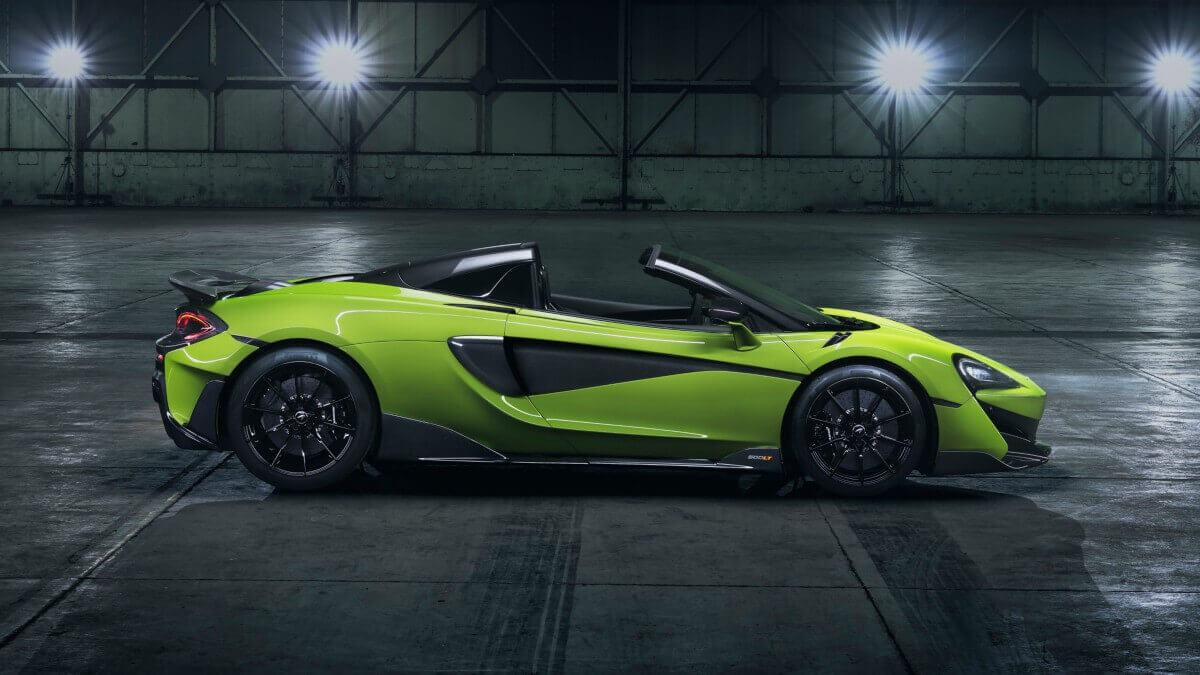 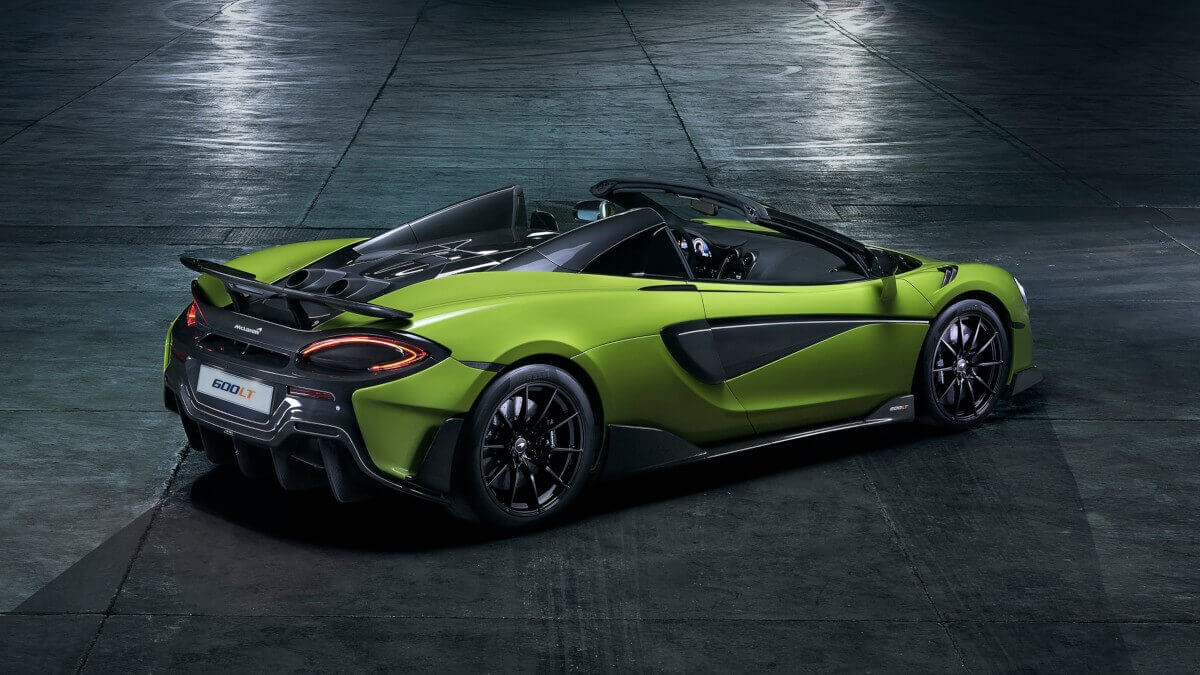 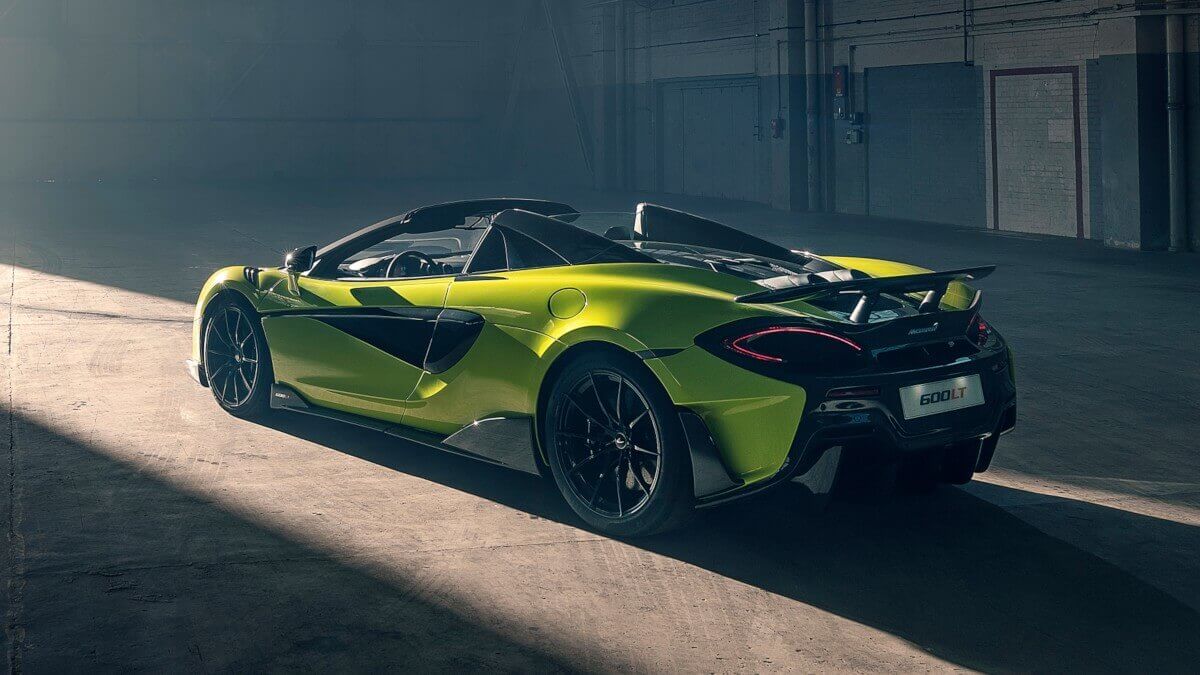 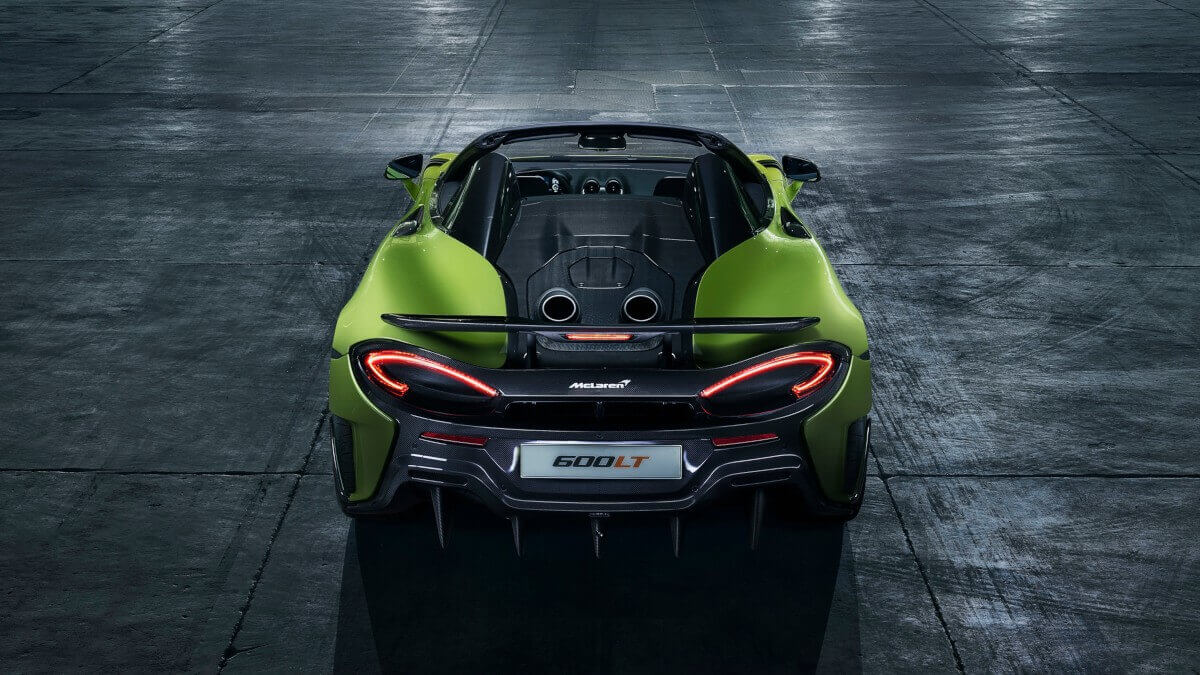 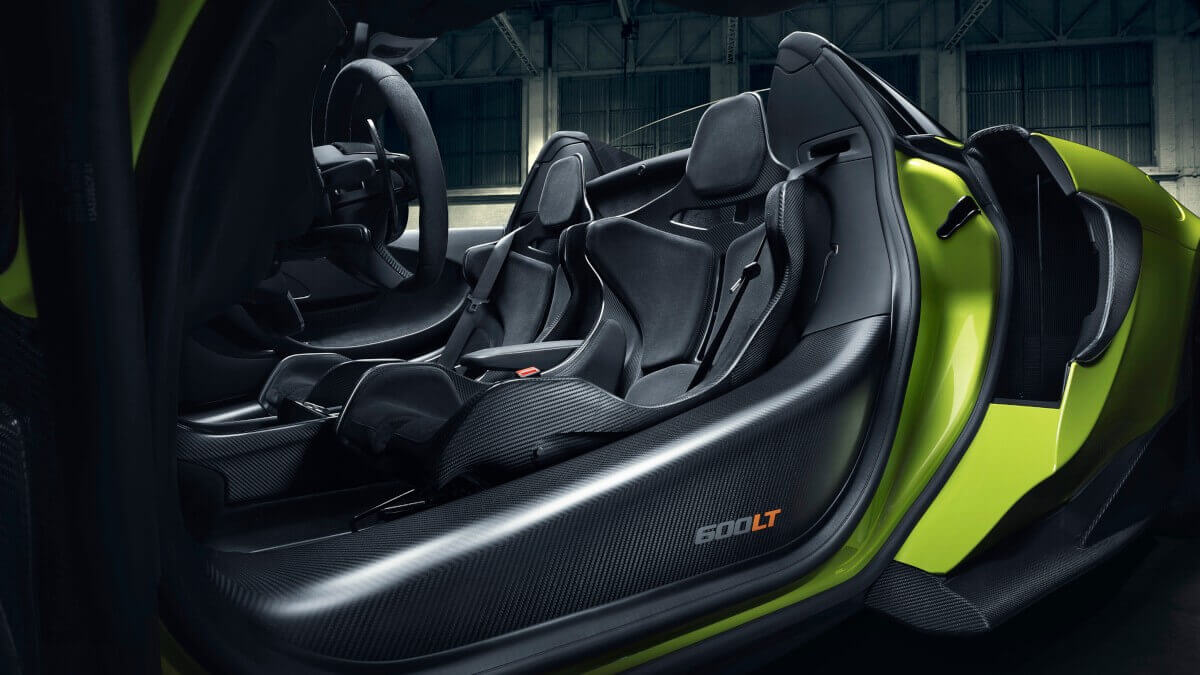 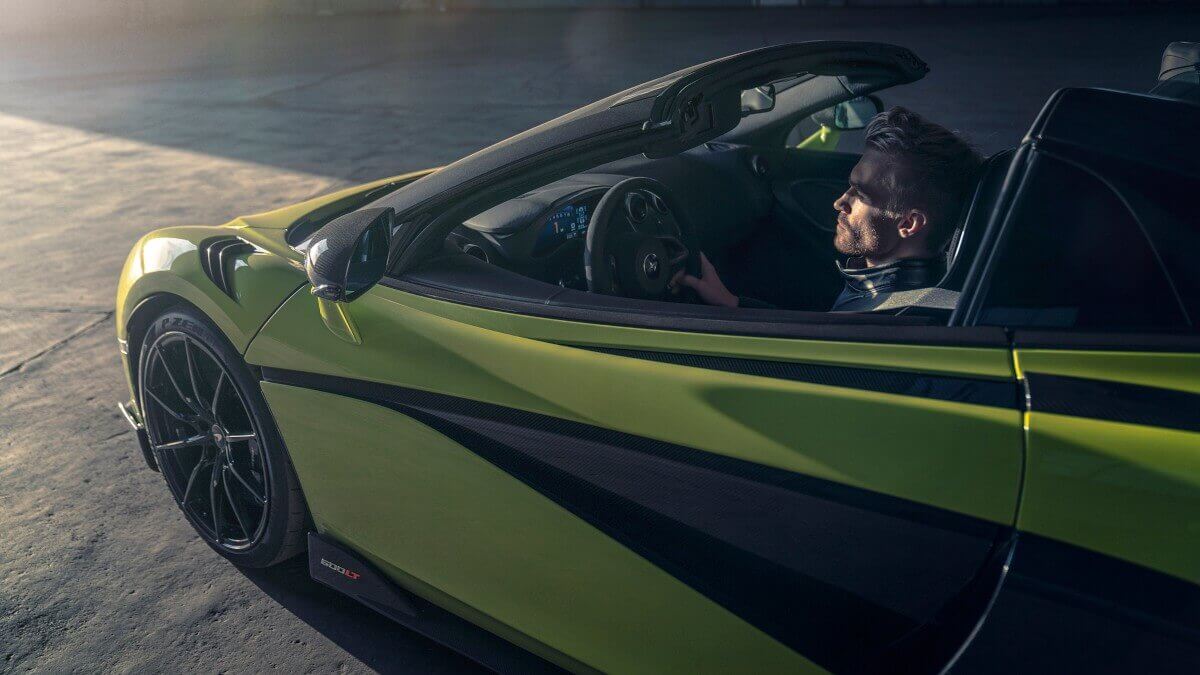 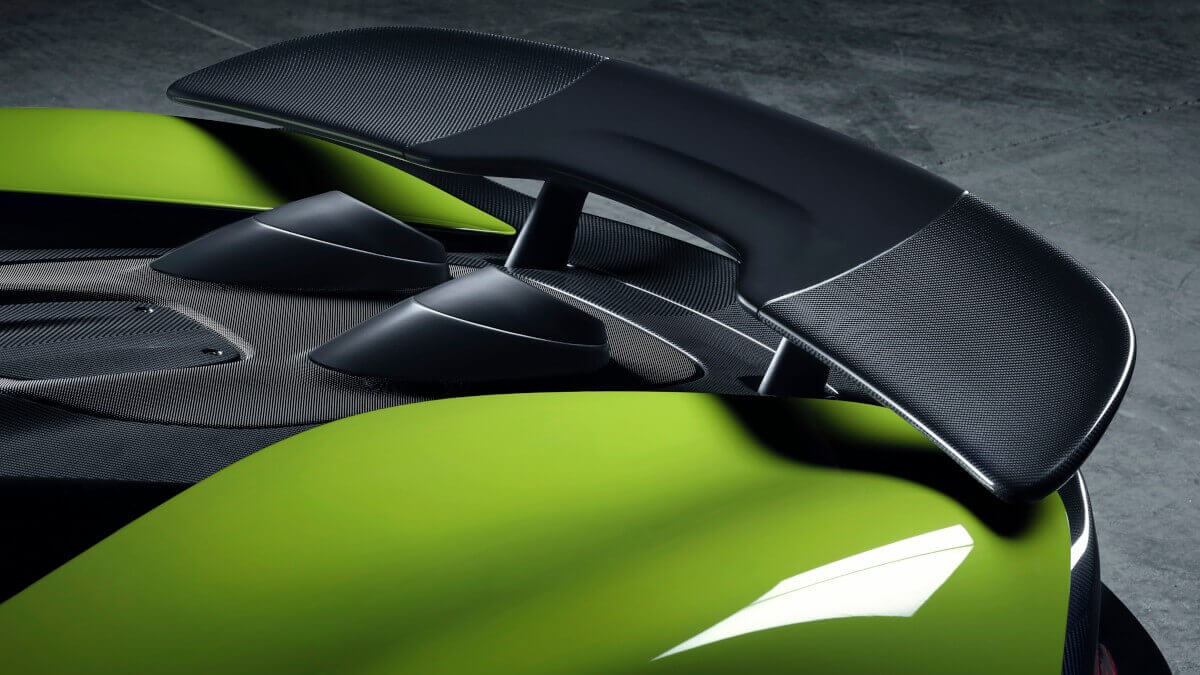 Like the 600LT Coupé, the new Spider has a full-carbon body with the same aerodynamic features compared to the 570S like the extended tail section and a large, fixed rear wing. As a result the car has also 100 kg of downforce at 250 kph (155 mph) like the Coupé despite the open-top bodywork.

The emphasis on weight savings clearly defines the interior of the McLaren 600LT Spider. Carbon shells that are only adjustable on their seat rails and are covered with thin leather and Alcantara upholstery serve as seats. They are taken from the supercar Senna. Otherwise, the 600LT Spider dispenses with superflous comfort equipment. Two displays provide all necessary information to the driver and allow operation of all comfort and infotainment functions. Visible carbon fiber on the sills and center console also indicates the light and stiff chassis visually.

Like its brothers in spirit, the McLaren F1 GTR Longtail and 675LT, also the fifth LT model of the British manufacturer is only available in limited quantity, although only limited by production time and not by an exact number. Interested customers can now place their order. In Germany the base price is 250,000 € (incl VAT), in the UK it is 201,500 GBP and for the USA it is 256,500 US$.