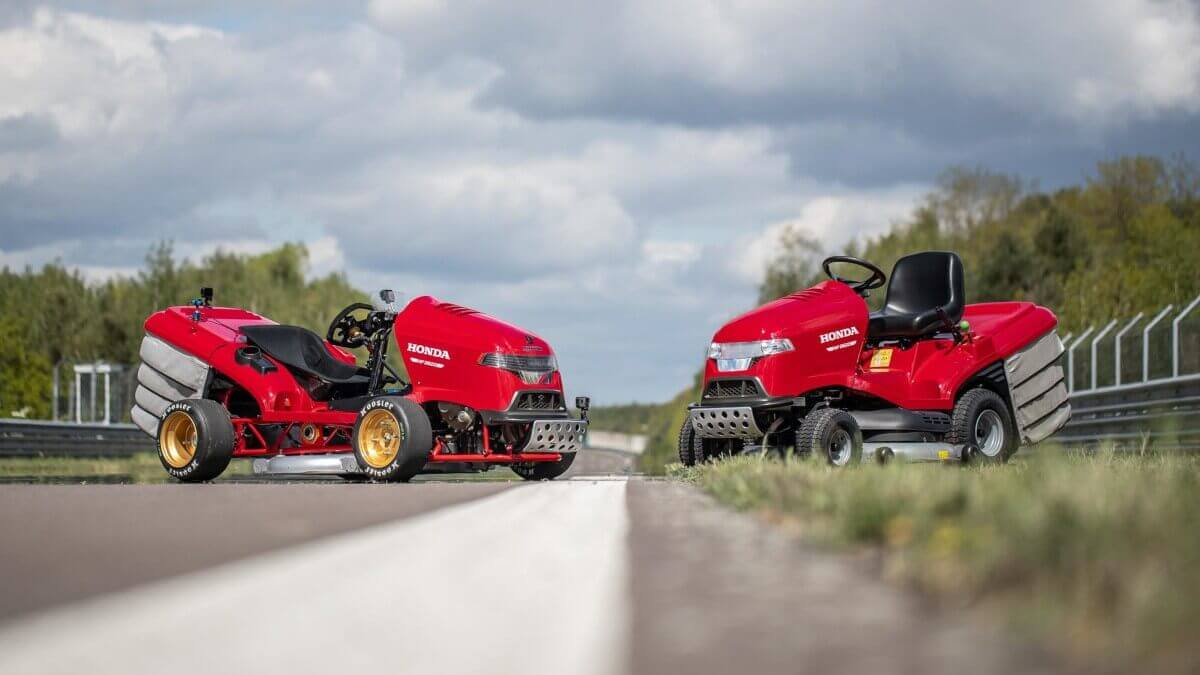 Five years ago, engineers at Honda’s gardening division came up with the idea of developing a very special ride-on lawn mower. This shouldn’t mow very well, but drive very fast. They quickly found a name for it: Mean Mower. On March 8, 2014, this vehicle hit a topspeed of 116.87 mph, a world record for the Guinness Book of Records. Since then, Honda hasn’t let go of this idea, and last summer presented the Mean Mower V2, which was developed together with Team Dynamics, the team that races the Honda Civic in BTCC. This time, the vehicle wasn’t based on an existing ride-on mower, but developed by CAD on the computer and then built from scratch from specially manufactured components, of which some were made in 3D printers. To achieve a certain ‘family resemblance’, the Mean Mower V2 comes with the front mask, grass catcher and some body parts of the Honda HF 2622, a normal ride-on mower available to everybody.

The drive is a 999 cc four-cylinder engine, which usually performs in the top-of-the-line motorcycle of Honda, the CBR1000RR Fireblade SP. At 13,000 rpm, 200 hp are available. Thanks to the super lightweight T45 steel frame and the engine dry weight of just 69.1 kg, the Mean Mower V2 achieves a power-to-weight ratio that exceeds that of a Bugatti Chiron. To prove the full potential of this construction, Timing Solutions Limited and an observer of the Guinness Book of Records were invited on the 6th May to the oval circuit of the Lausitzring near Dresden/Germany. 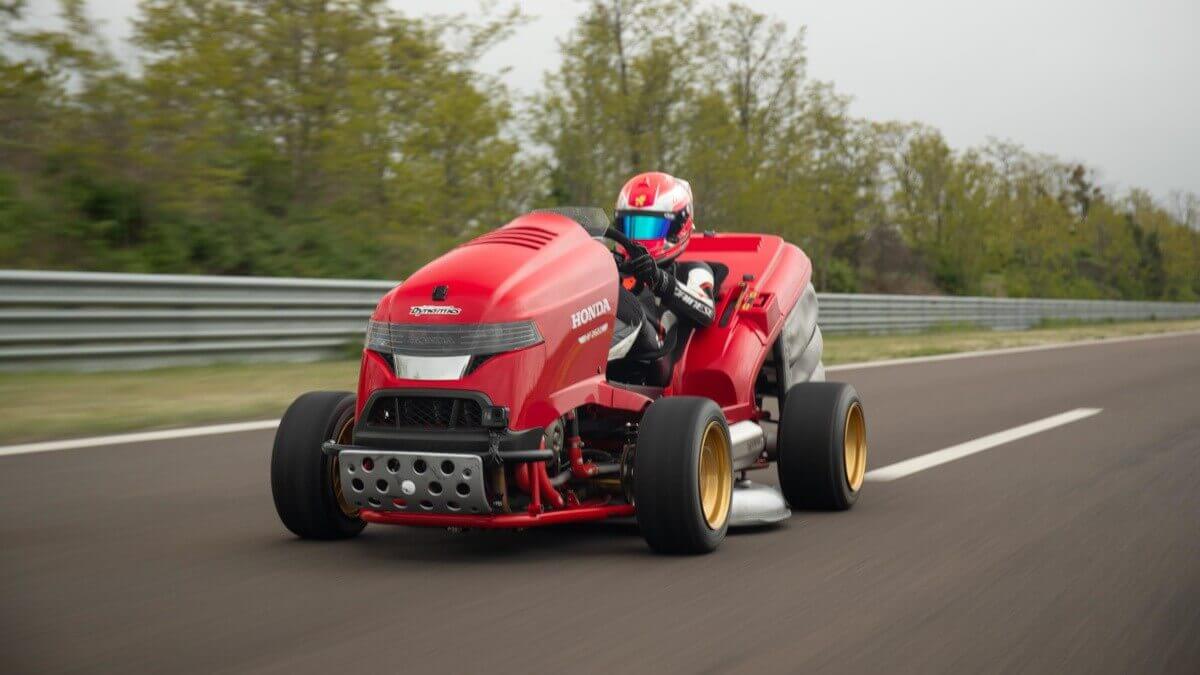 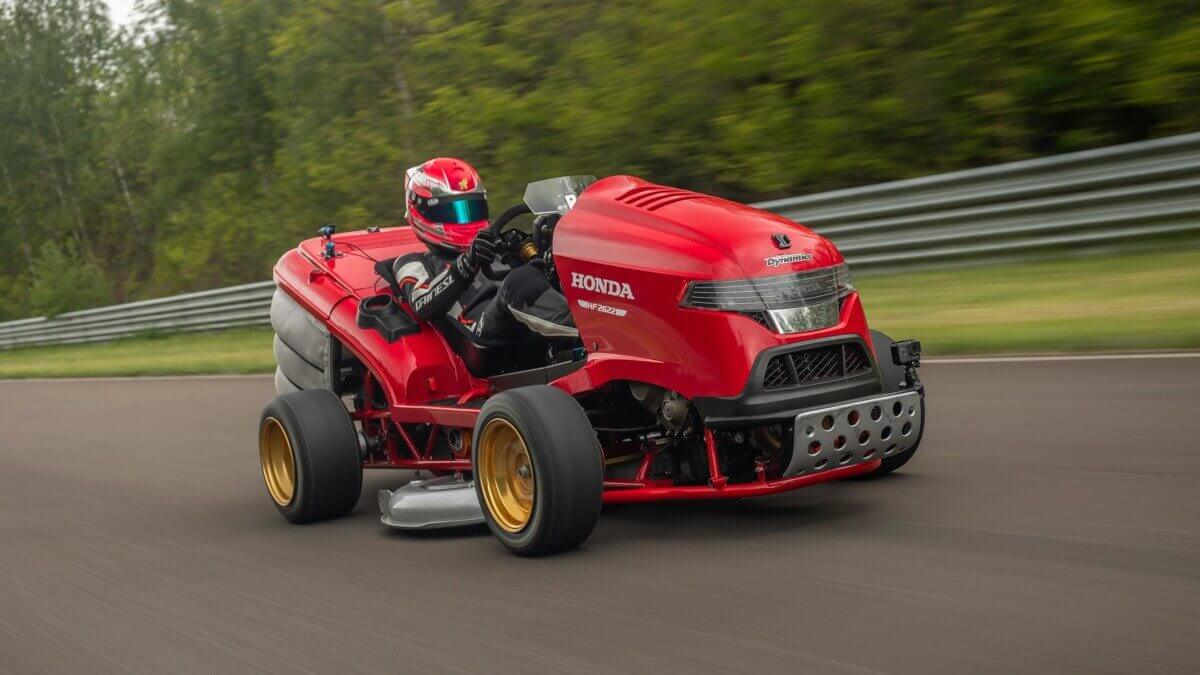 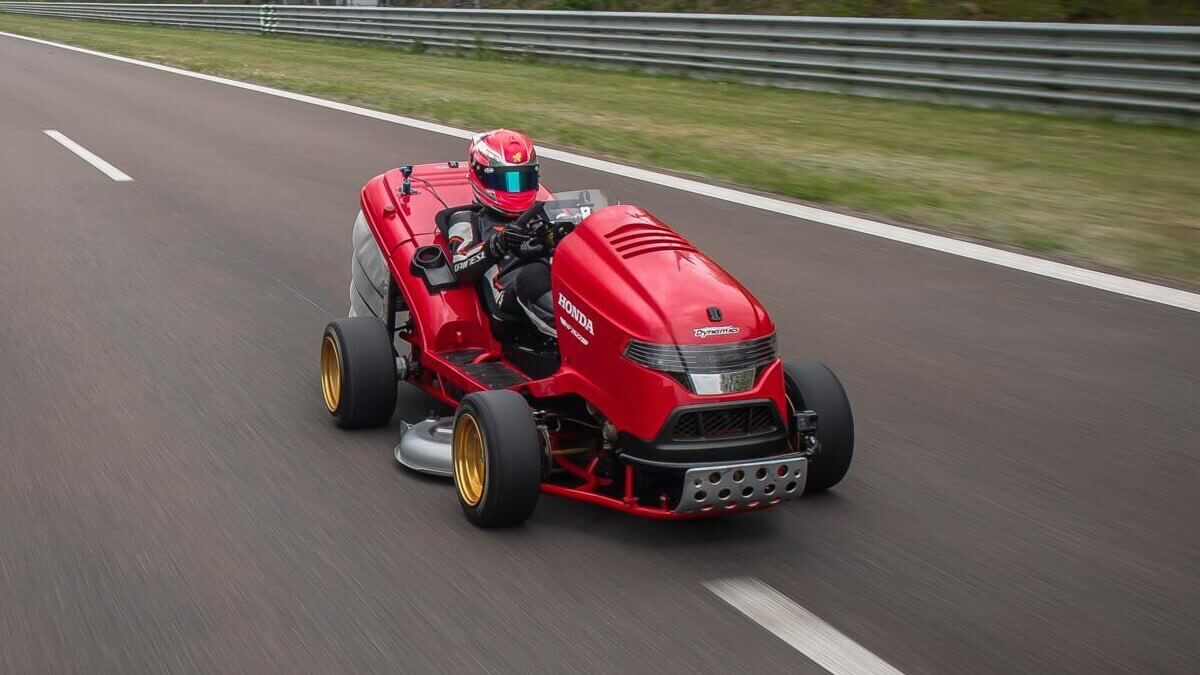 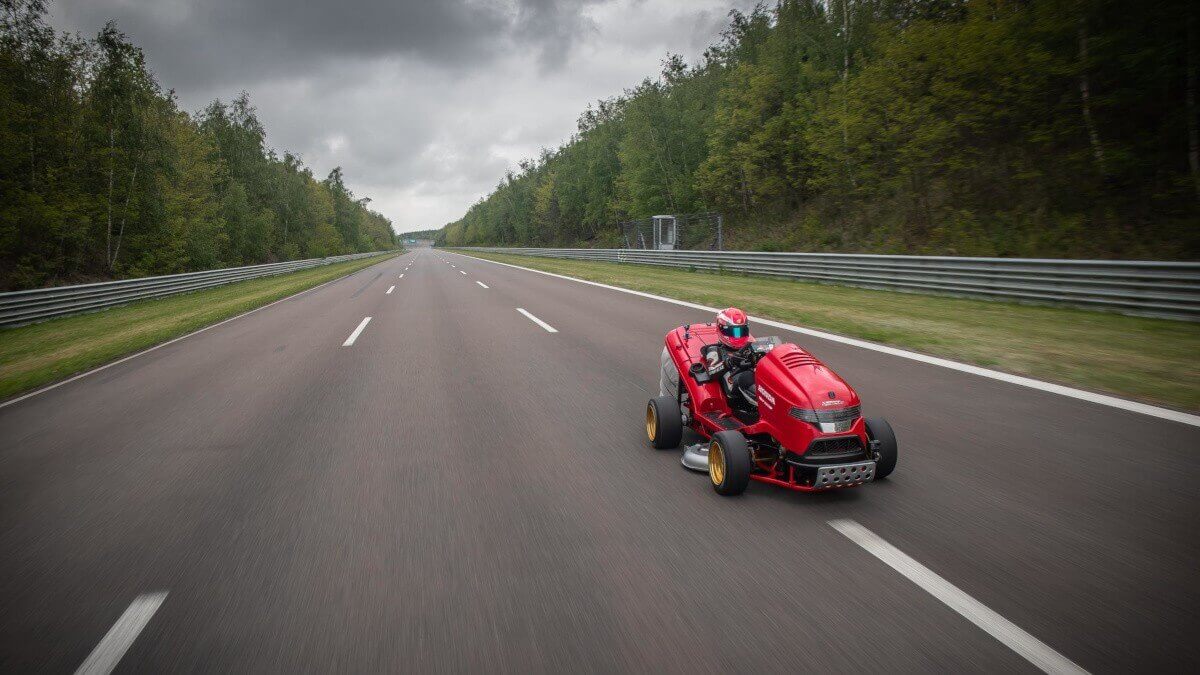 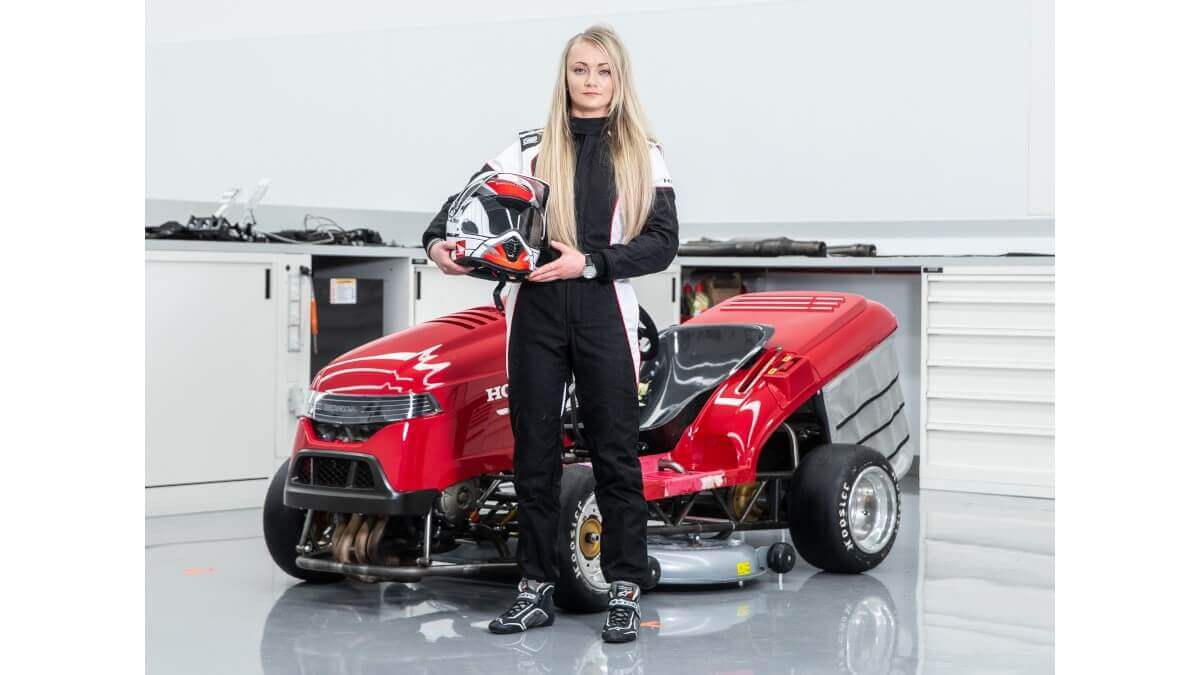 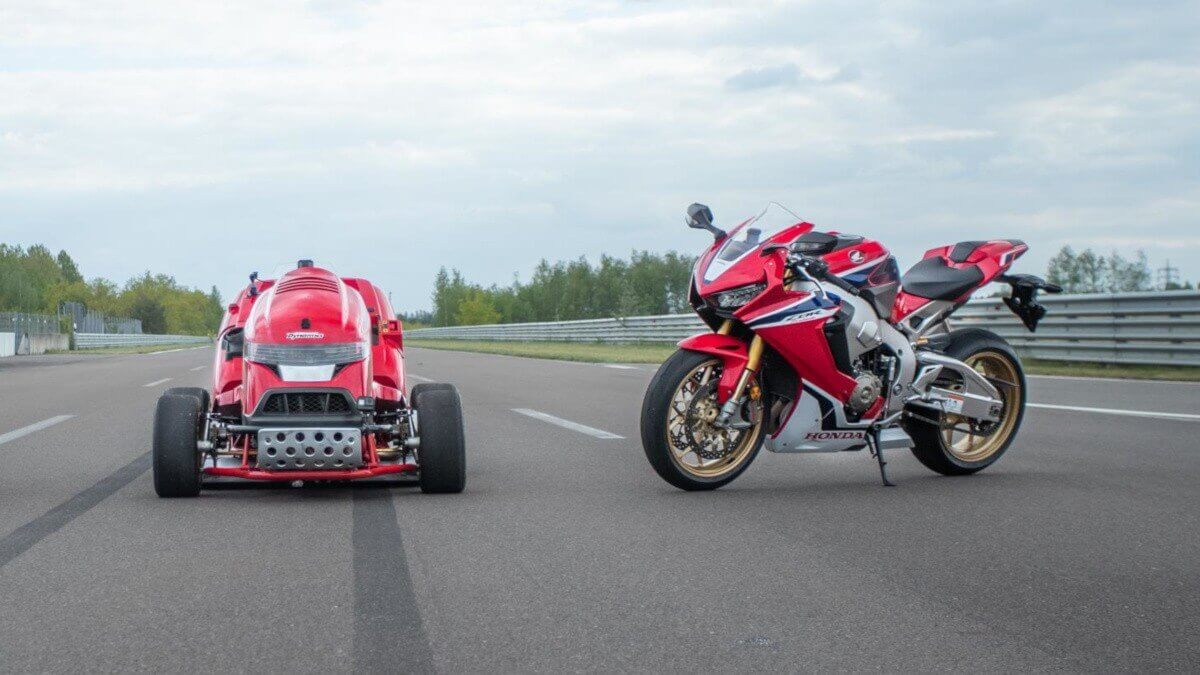 There, the experienced stunt woman, kart driver and racing driver Jess Hawkins took place behind the steering wheel of the Mean Mower V2 and went on a record hunt. This time, however, it wasn’t just about the topspeed, but rather about the acceleration capacity. According to the official regulations for such record runs, the tests had to be completed within one hour in both directions to determine an average value. Jess Hawkins averaged 6.29 seconds to accelerate to 100 mph. So Honda not only created the new record category ‘Fastest acceleration from 0 to 100 mph for a lawn mower (prototype)’, but also proved it more than impressive.

As they had rented the long straight of the oval course anyway, they also tried to improve the speed record. In the end, the gauges of Timing Solutions Limited showed an average speed of 150.99 mph. This improved the five-year-old record clearly. By the way, despite its clear focus on speed records, the Mean Mower V2 is still able to mow lawns if it has to do. Imitators or competitors do not seem to exist.