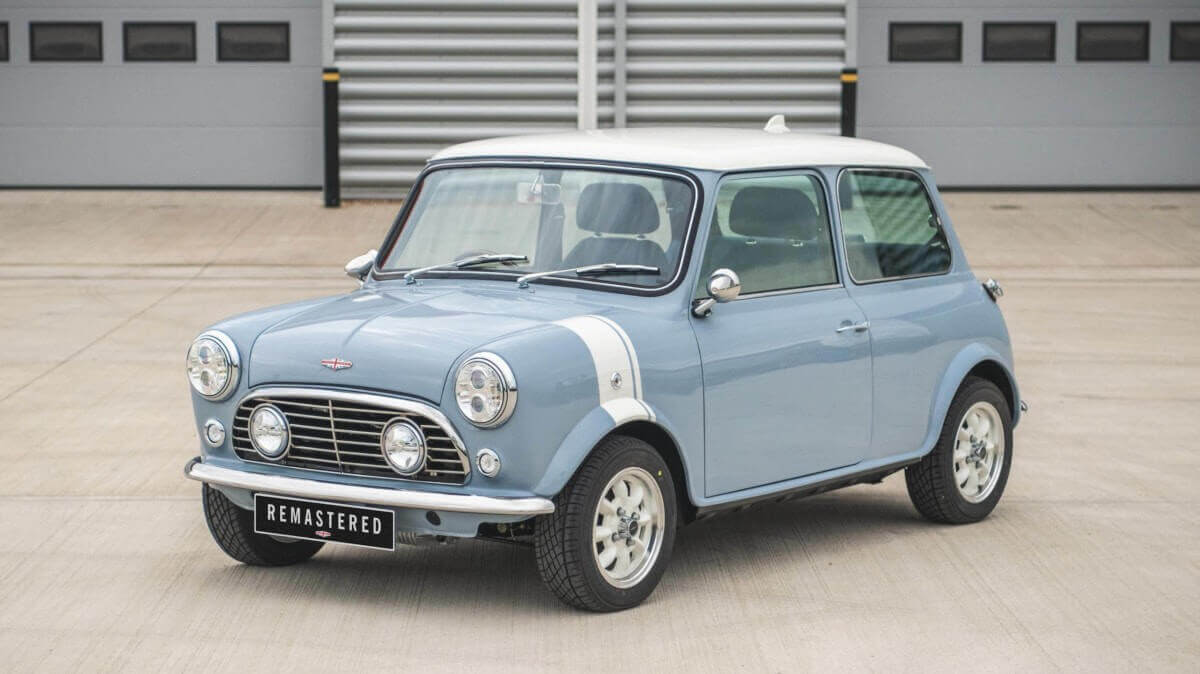 After David Brown Automotive presented the limited Oselli Edition of their Mini Remastered earlier this month, an exclusive look at a recently completed customer vehicle from the normal series production of this modernized classic follows now. The Mini Remastered made its debut at the 2018 Geneva Motor Show and is based on the classic Mini by Sir Alec Issigonis, built by Rover until 2000. David Brown specifically uses vehicles from the final production phase that already carry the 1.3-liter four-cylinder engine under their bonnets. These are given an extensive rejuvenation treatment in their own factory directly at the Formula 1 racetrack in Silverstone. For this, they are completely dismantled down to the last nut and bolt. Then the body-in-white is stripped of paint and the typical exterior body seams and rain gutters are removed.

For the subsequent rebuild, the company works closely with the respective customers and takes their color and material requirements into account. For example, the latest vehicle was painted in ‘Bad Moon Rising’, a light greyish blue, in combination with a contrasting roof in ‘A Whiter Shade of Pale’. This white tone can also be found on the 12-inch alloy wheels and as a stripe pattern on the front left fender. Like all Mini Remastered cars, this car was then fitted with LED headlights and new rear lights, which also work with LEDs. Two Cibié auxiliary headlamps are also integrated into the newly designed radiator grille. At the rear, the two exhaust tailpipes come out in centered position. 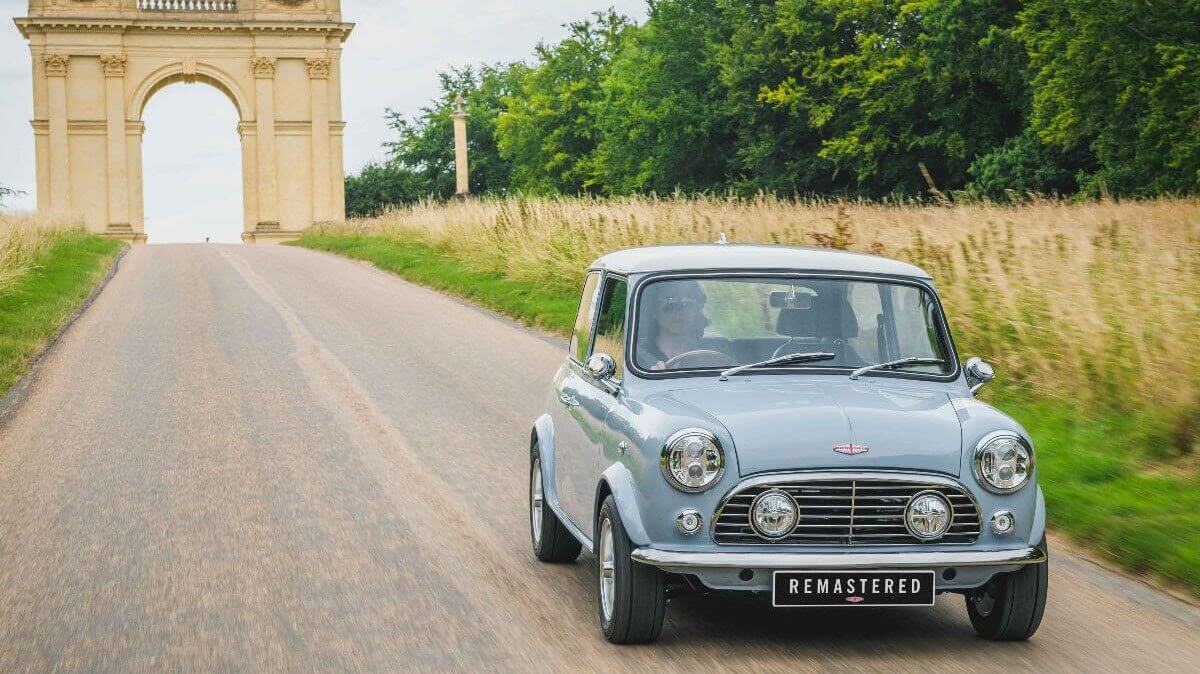 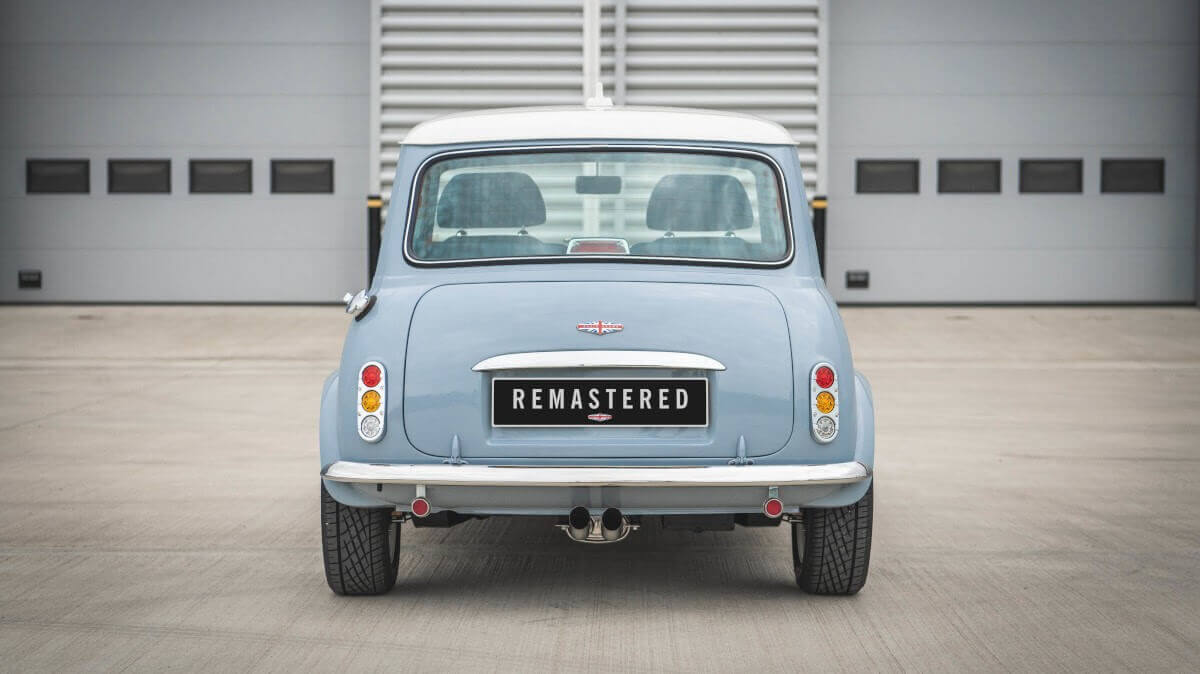 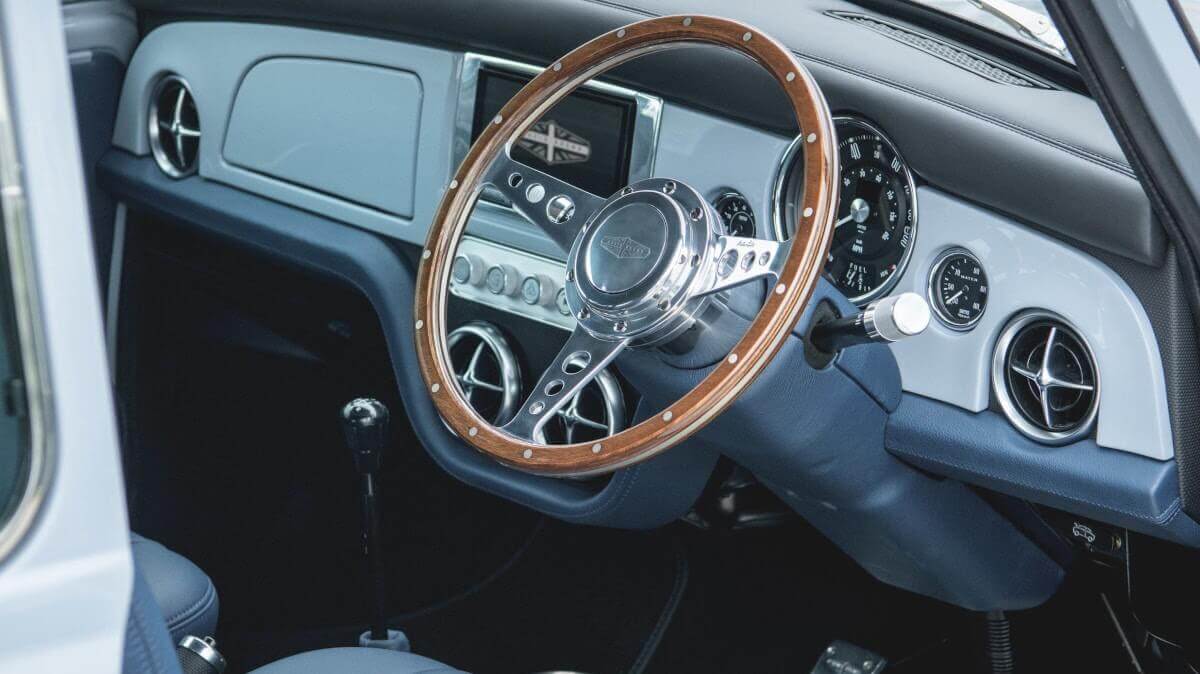 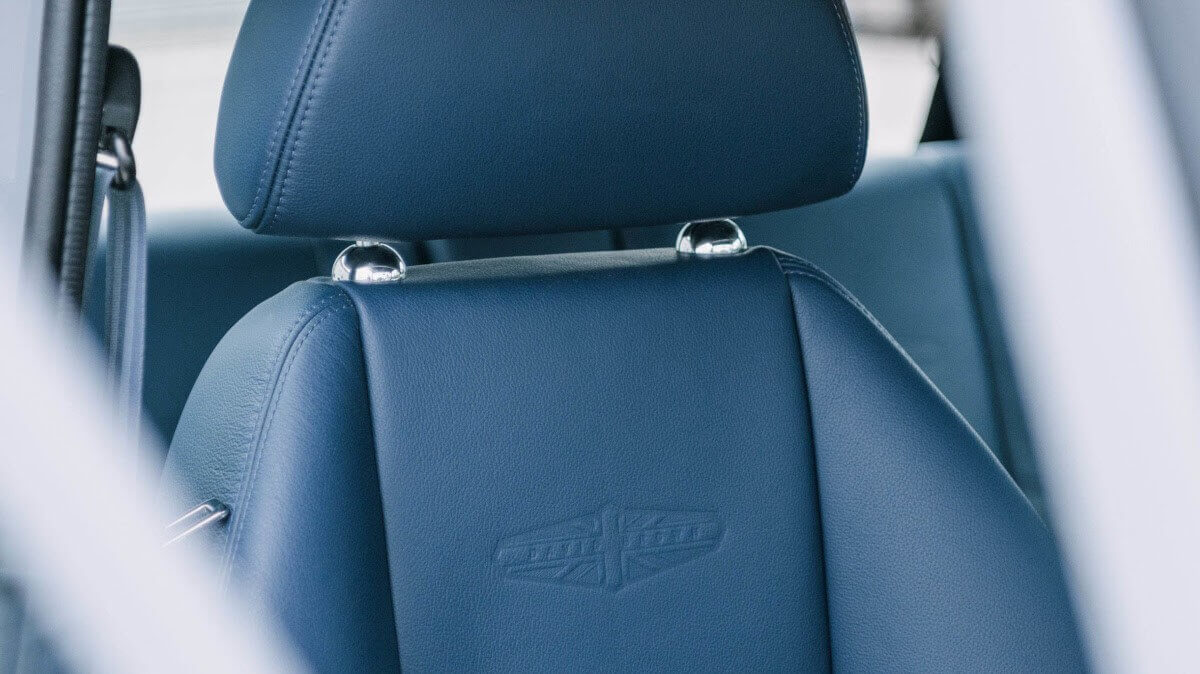 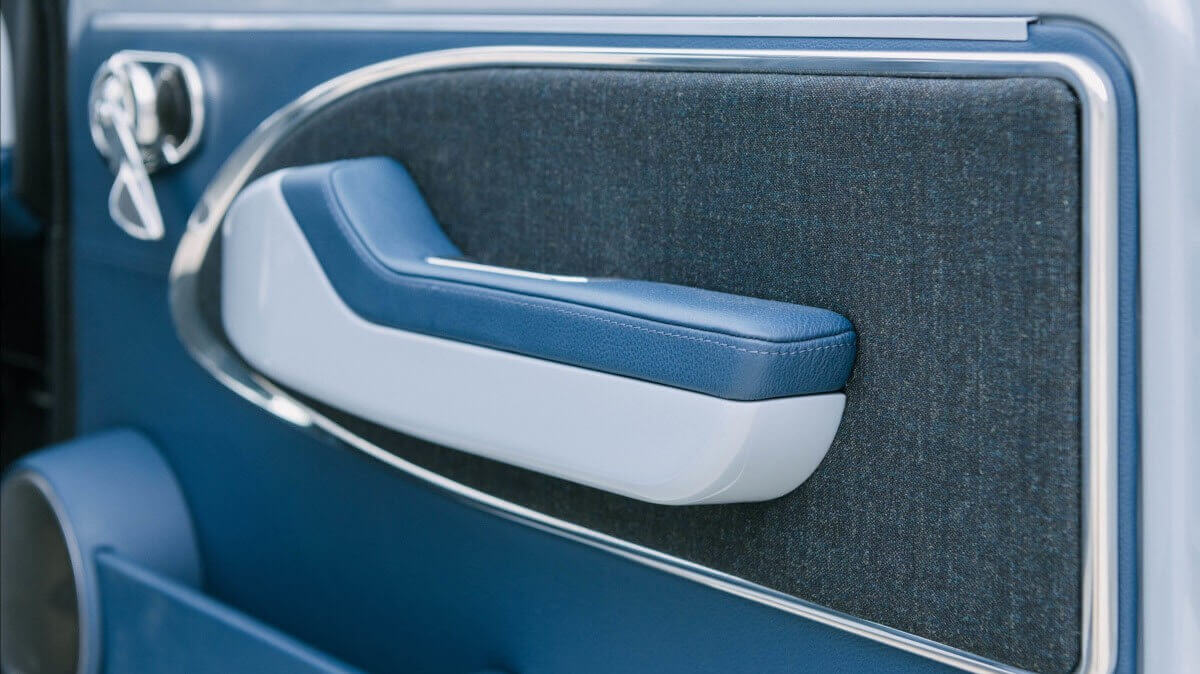 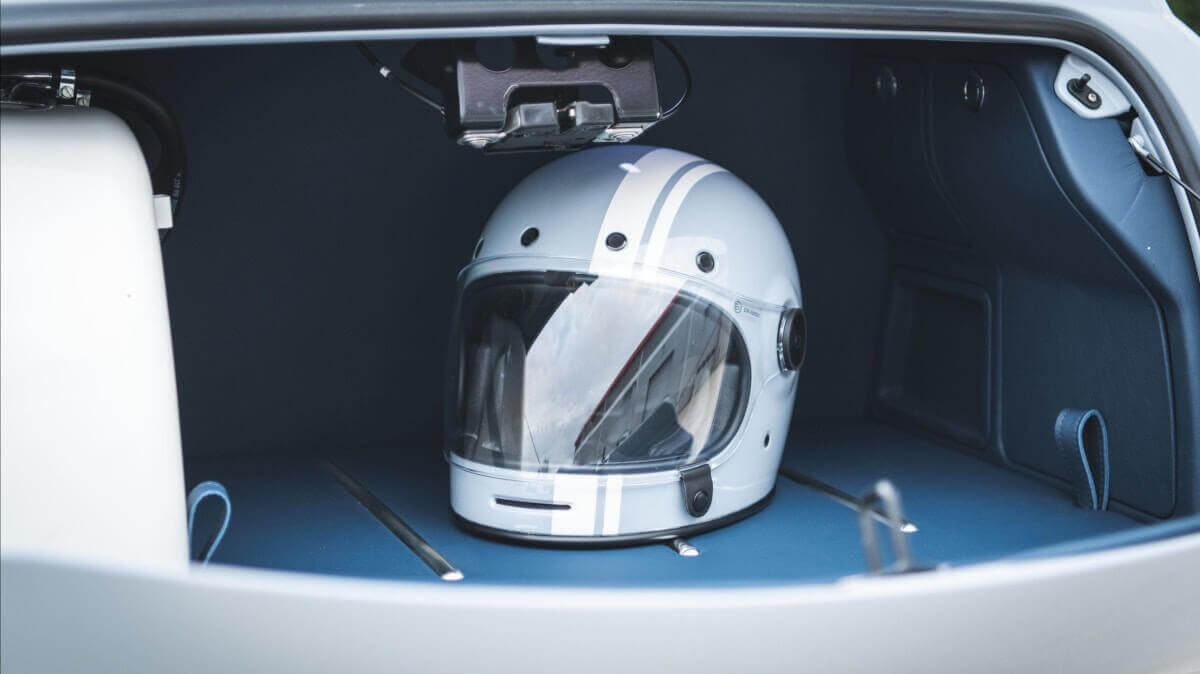 The new sports exhaust system is mounted on the modified four-cylinder engine. David Brown has given the engine a complete overhaul with a new paint job for the block and body colored add-on parts. In addition, they use new innards, which increase performance by about 30 percent compared to the original. Depending on the customer’s requirements, this power is then transmitted to the front wheels via a manual four- or five-speed gearbox.

Inside, the customer of the car shown in our gallery chose a leather interior in dark blue, combined with elegant denim-like Kvadrat fabric on the seat center panels, the roof lining and the door panels. The armrests on the doors and the dashboard also show areas in body color. The touchscreen display for the new infotainment system is located centrally in the dashboard, while the most important vehicle data is displayed on one large and two small analogue round instruments behind the wooden steering wheel. All control elements are made of aluminium. The happy new owner of this Mini Remastered also received a helmet painted to match the car, which can travel inside the leather-covered boot.