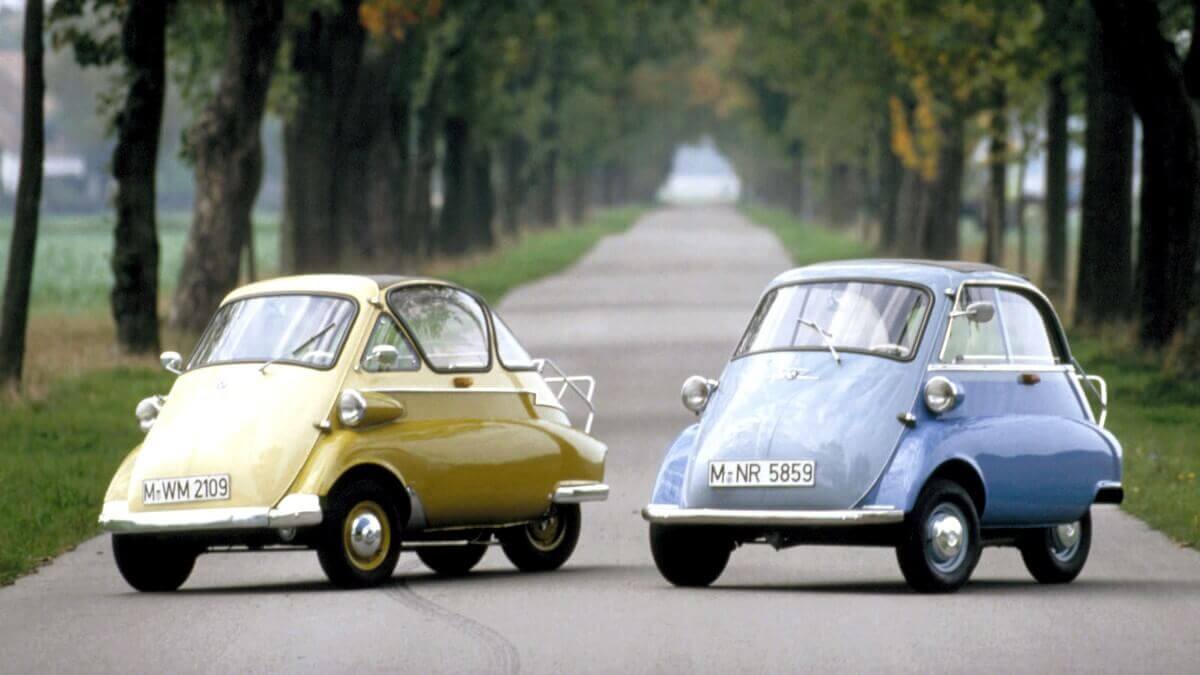 Today, BMW is known for an almost confusing range of models, from compact cars of  the 1 Series to large SUVs such as the X7 or elegant coupés and convertibles of the 8 Series. Apparently, even some of the marketing managers of the car manufacturer from Munich no longer know that this wasn’t always the case. While before the war, various mid-range models and sports cars rolled out of the BMW plant in Eisenach, during the war years, state pressure forced the company to switch to the production of aircraft engines in Munich and motorcycles for the Wehrmacht in Eisenach. From 1945, BMW was faced with a shambles, as the production facilities for cars were now under Soviet management in the Eastern sector and were placed under the control of the Awtowelo joint stock company as compensation for the war. This used pre-war construction plans and soon produced cars under its own brand EMW (Eisenacher Motoren-Werke), which were not only visually very reminiscent of earlier BMW models. Initially, these vehicles even carried the BMW logo, which the Munich-based company couldn’t prohibit until 1951 by court. From 1952 on, the conversion of the production from large four-stroke sedans to compact two-strokes began, such as the IFA F9 and later the Wartburg 311 and 353.

Meanwhile, the BMW AG in Munich was trying to rebuild itself after the war, as all the production halls there had been destroyed or dismantled. It wasn’t until 1948 that the first new motorcycles rolled out of new production halls. It even took until 1952 before the first post-war car was introduced, when the representative 401 sedan with an inline six-cylinder engine was presented. Over the years, there were also a few Coupés and Cabriolets of this upper class vehicle, and from 1954 a variant with a V8 engine, which was given the abbreviation 502. However, these large models were aimed at a group of buyers who, at least in large parts of Western Europe, were only available in limited numbers so shortly after the war. In addition, the very round shapes, which earned the model the nickname ‘Barockengel’ (Baroque Angel) in Germany, made the car even less interesting for many potential customers. BMW therefore urgently needed a small-scale bestseller to ward off the threat of bankruptcy. Many customers couldn’t afford much more than a used motorcycle. Even the Volkswagen was unaffordable to many. The emerging Wirtschaftswunder (economic miracle) in Germany gradually enabled many to climb the ladder and in the 1950s paved the way for so-called micro cars, i.e. small cars that were often equipped with engines from scooters or motorcycles. It was helpful that the old German Class IV driving license included not only two-wheelers but also motor vehicles up to 250 cc capacity. Although BMW couldn’t afford an expensive new development, the company found another way to include a corresponding car in their range: license construction. 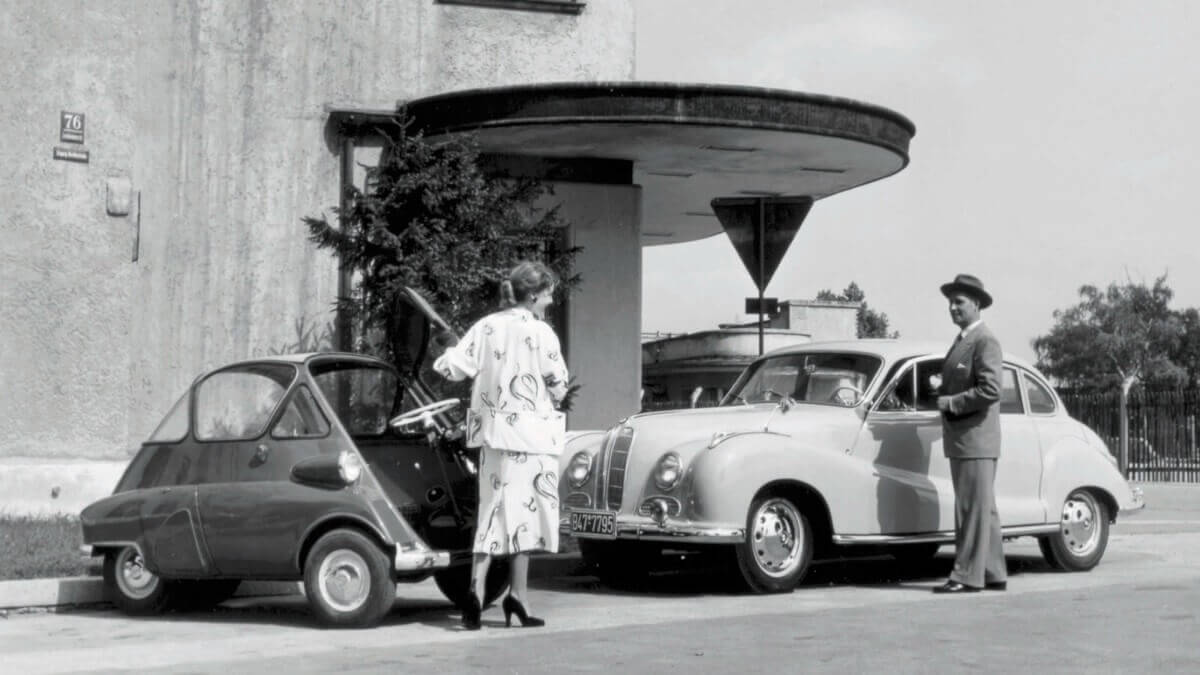 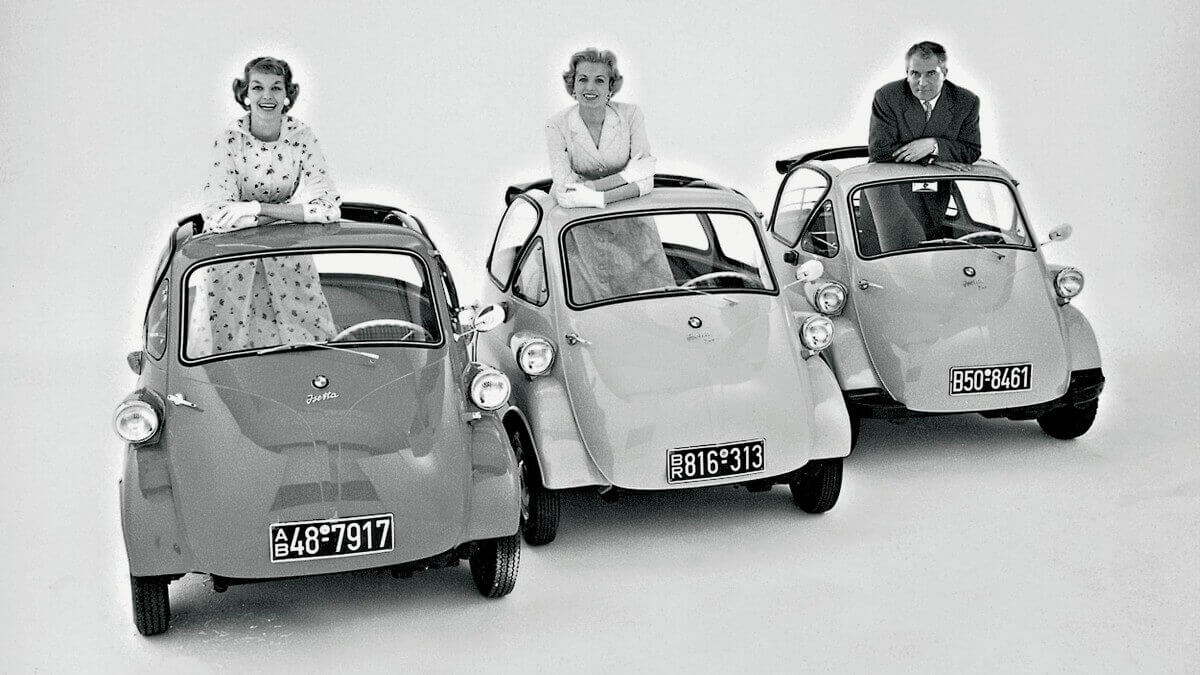 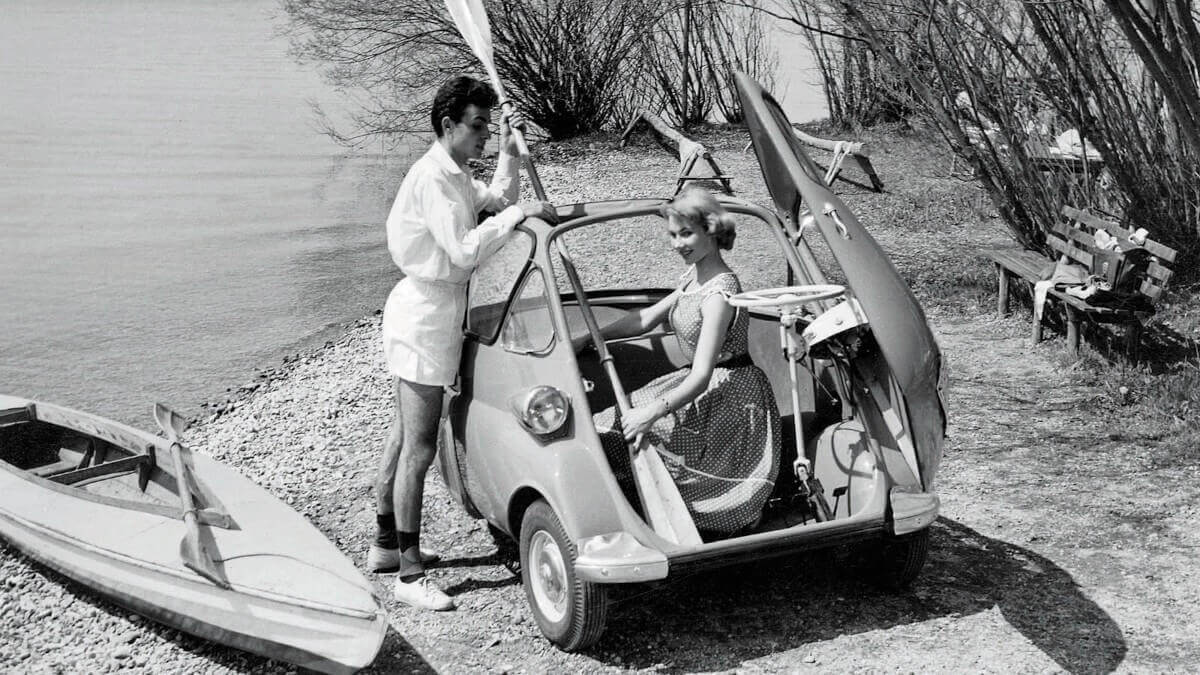 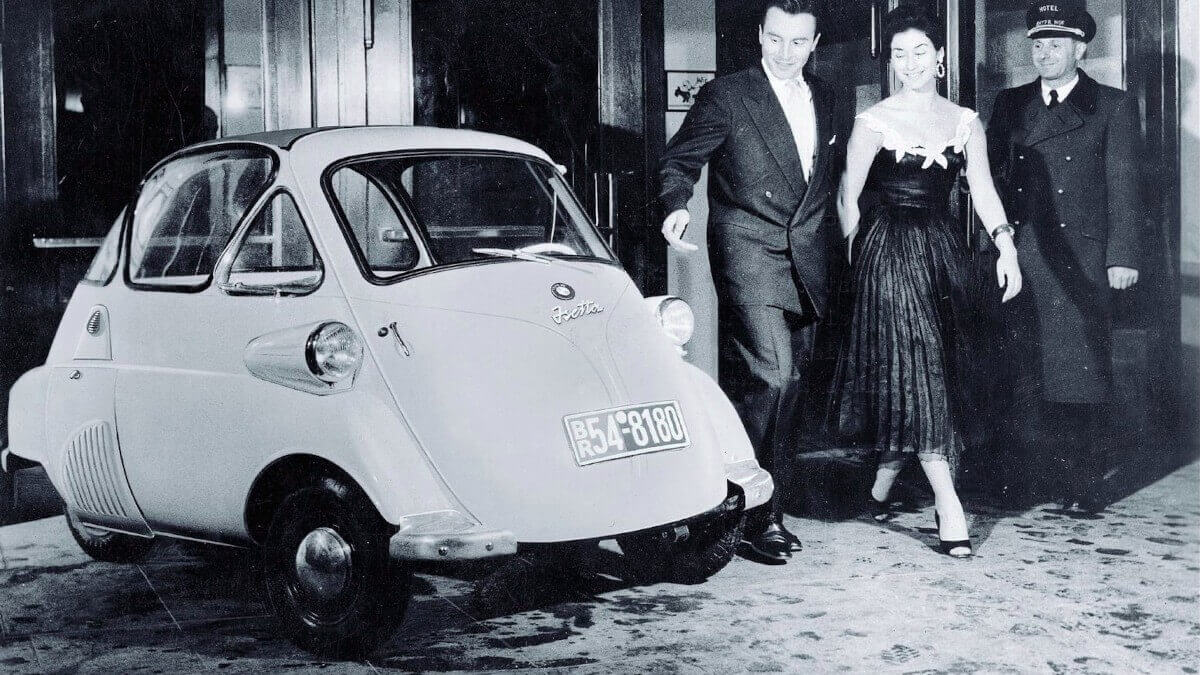 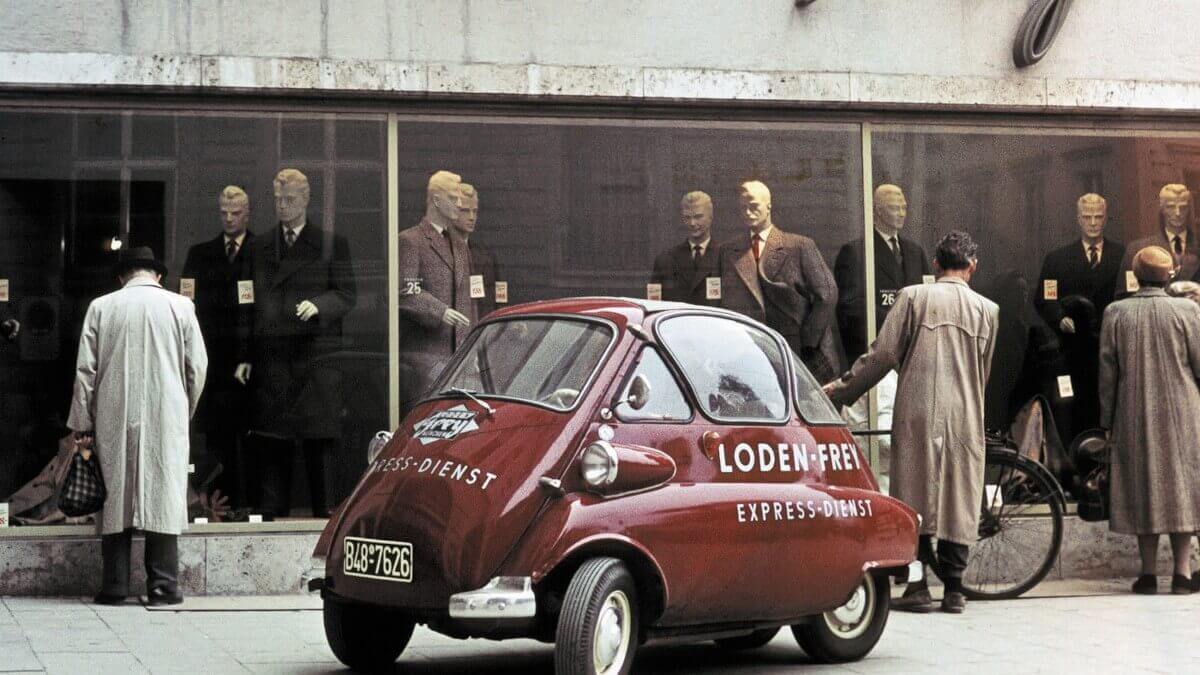 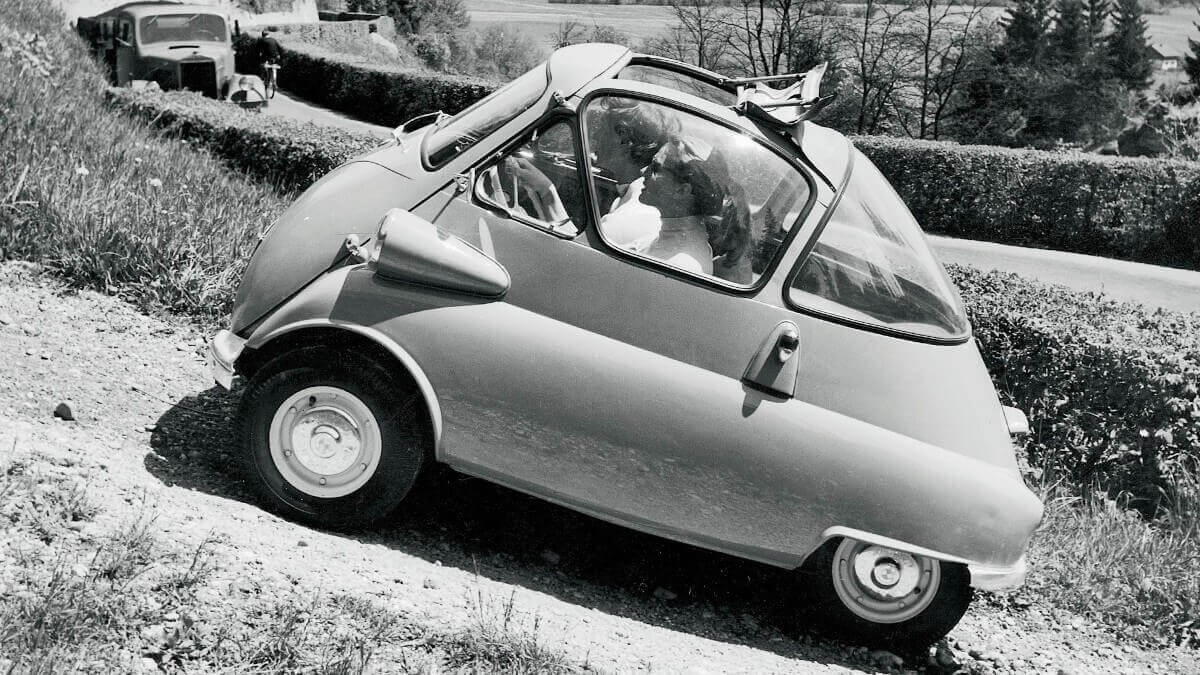 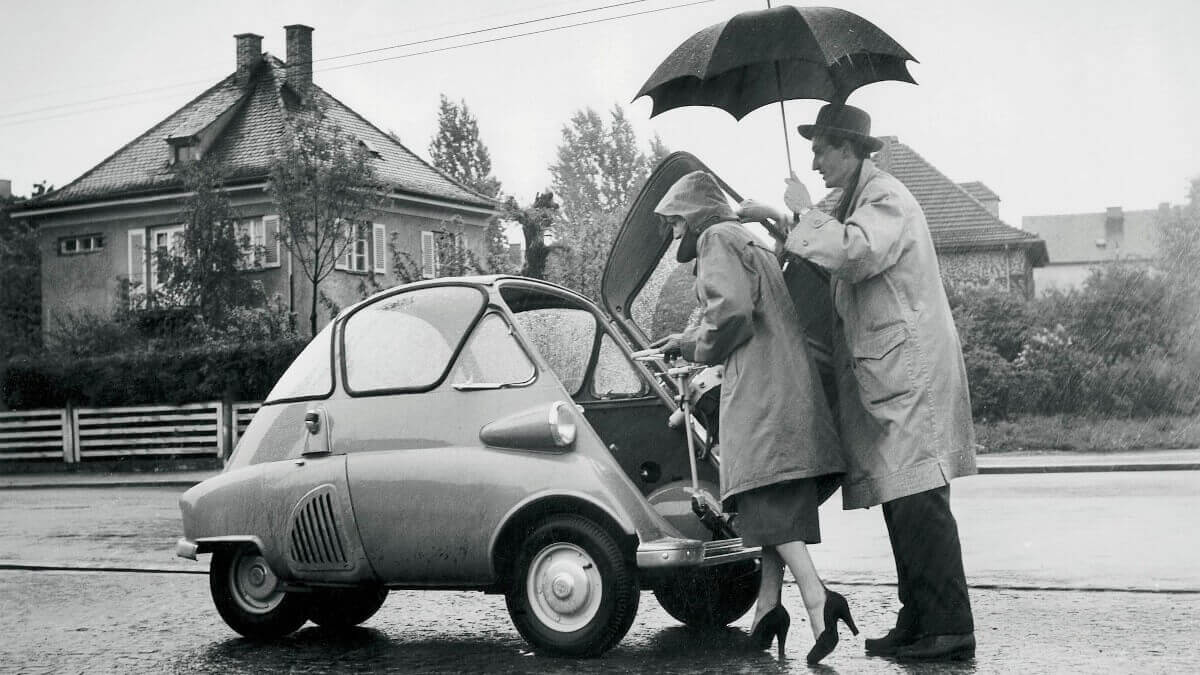 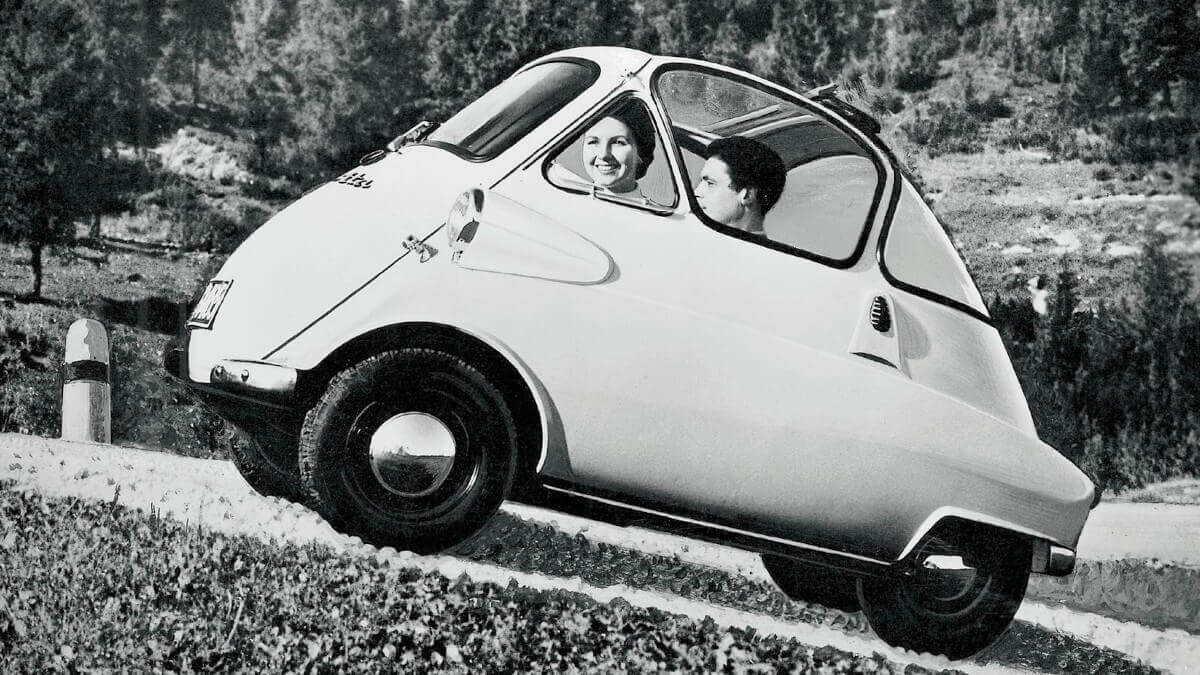 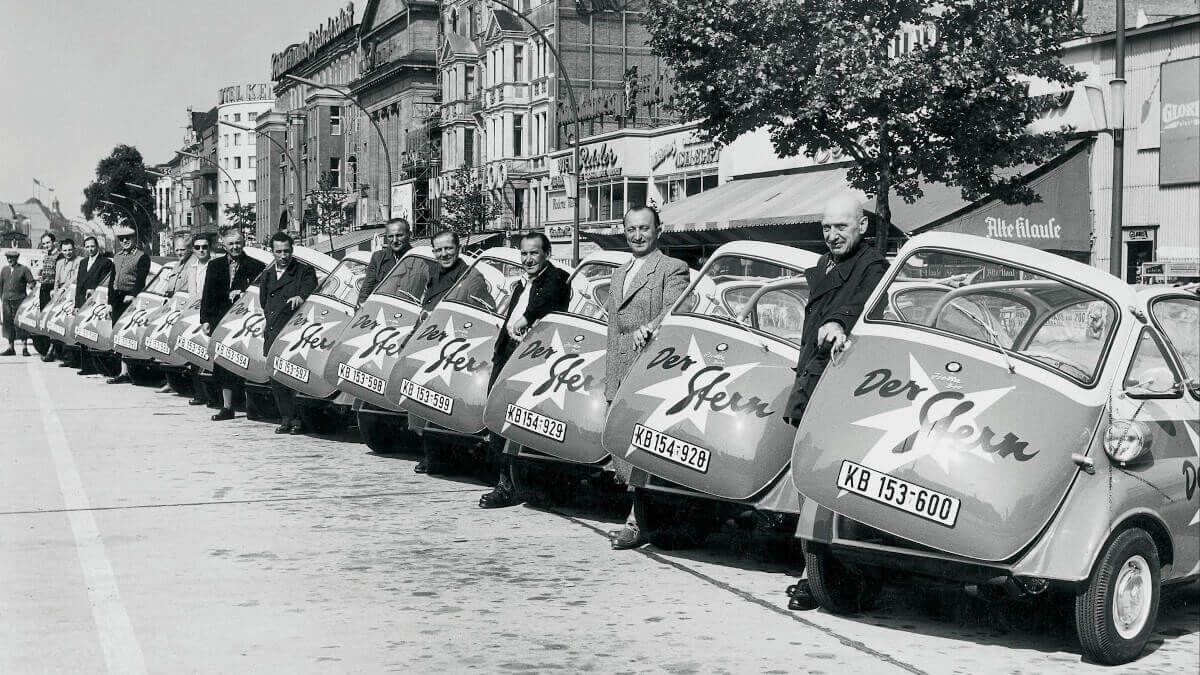 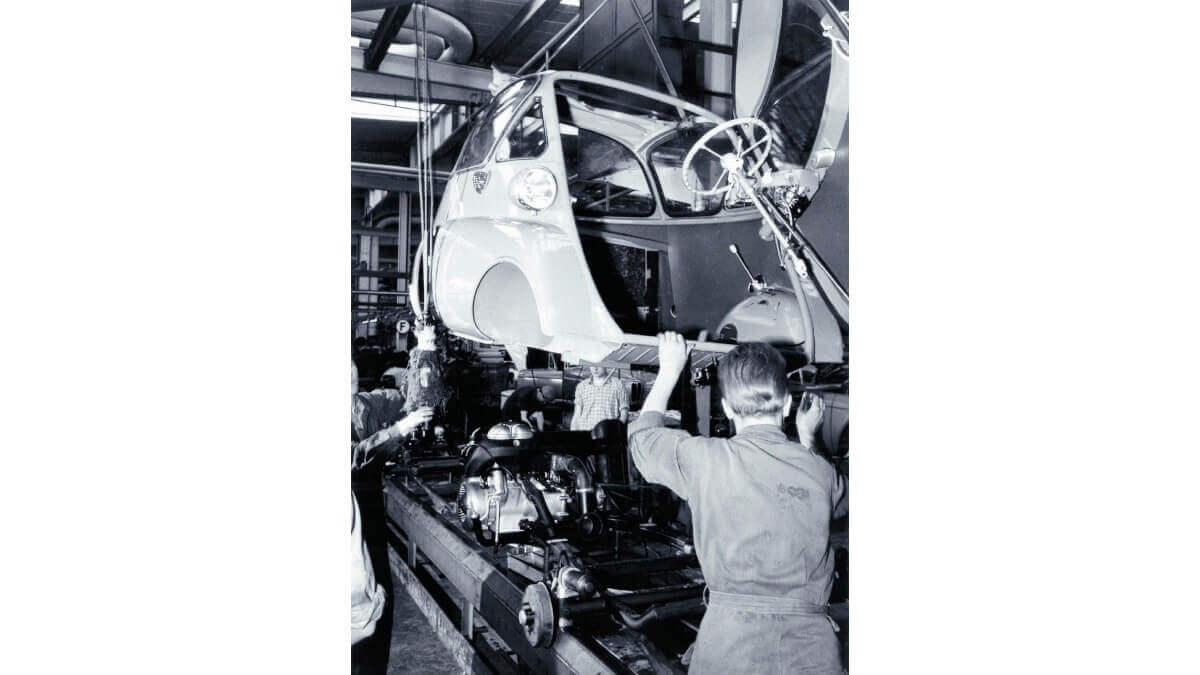 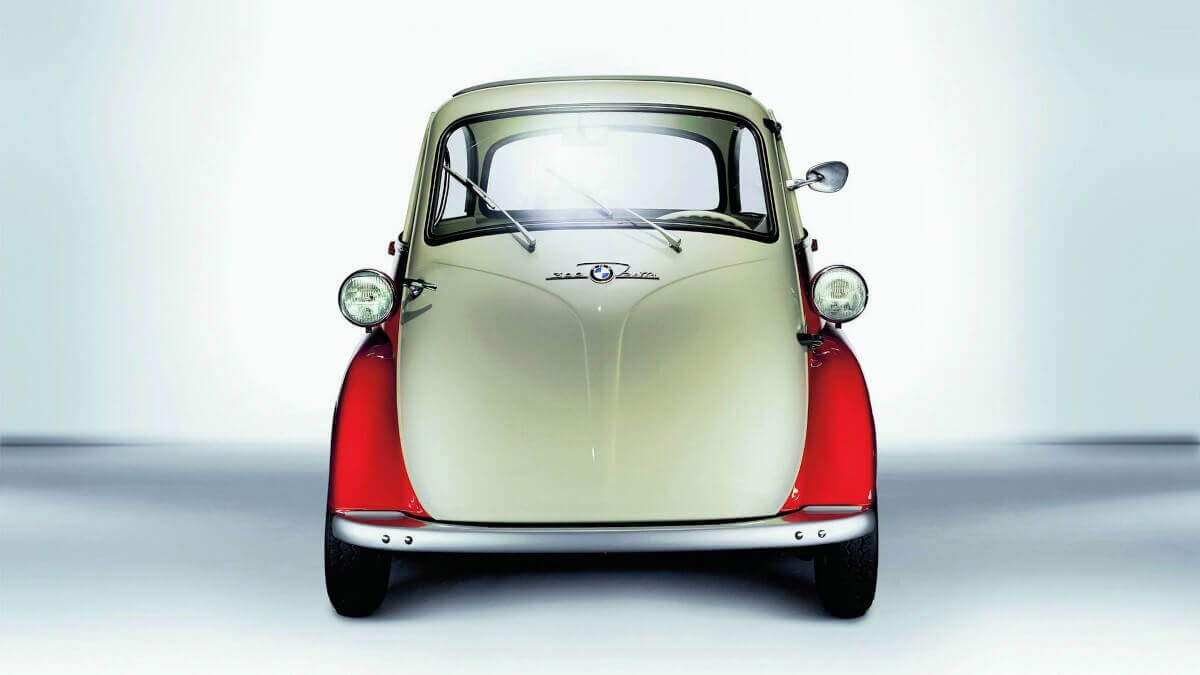 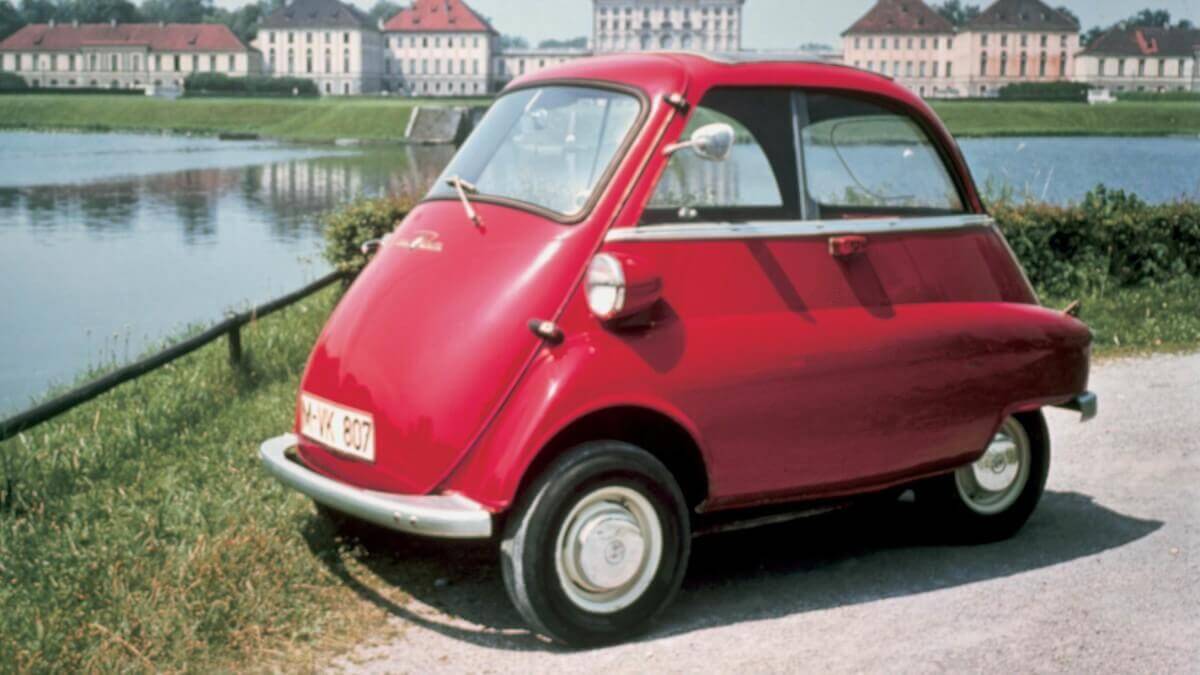 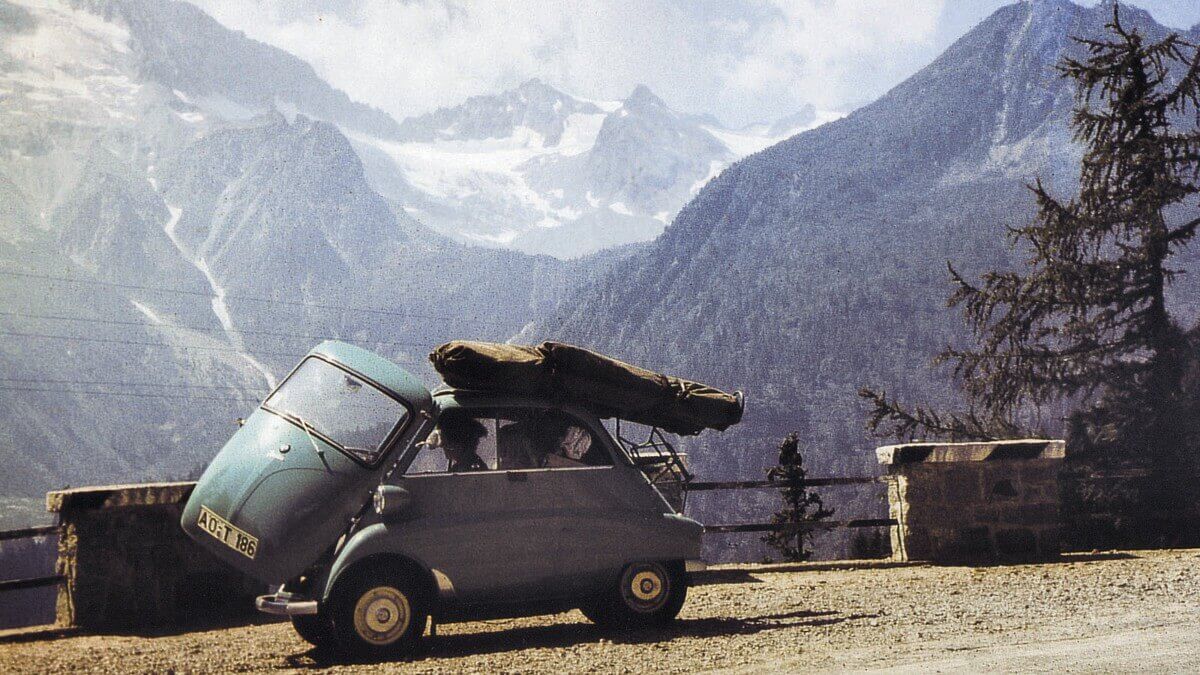 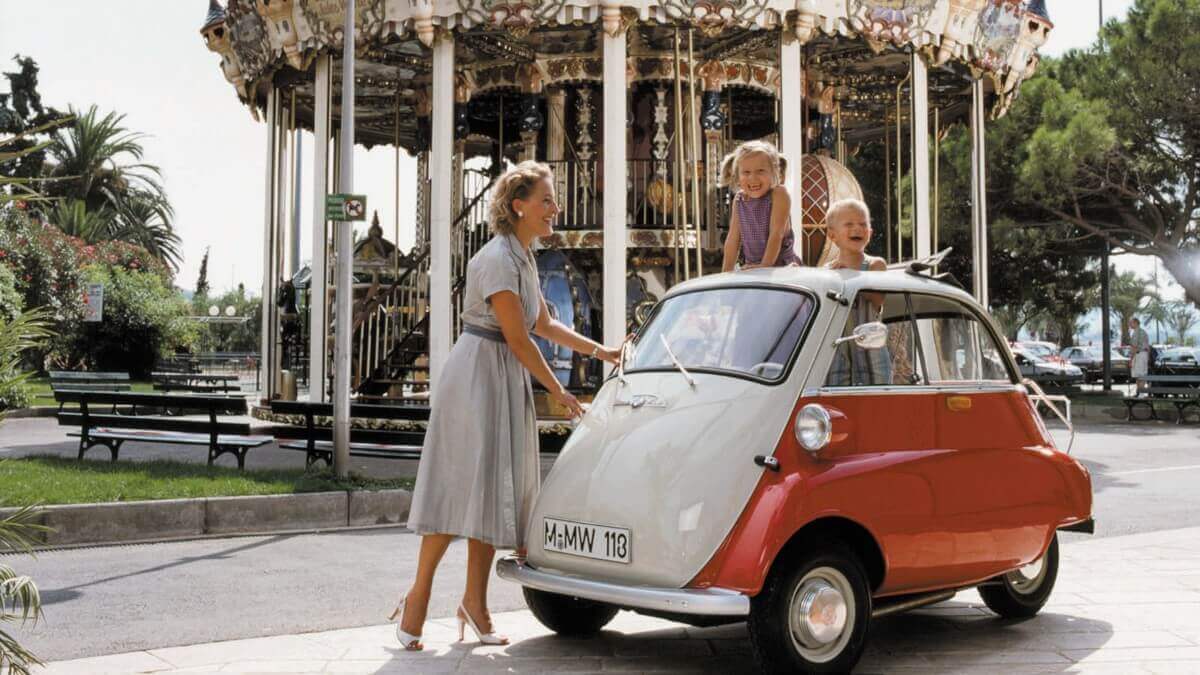 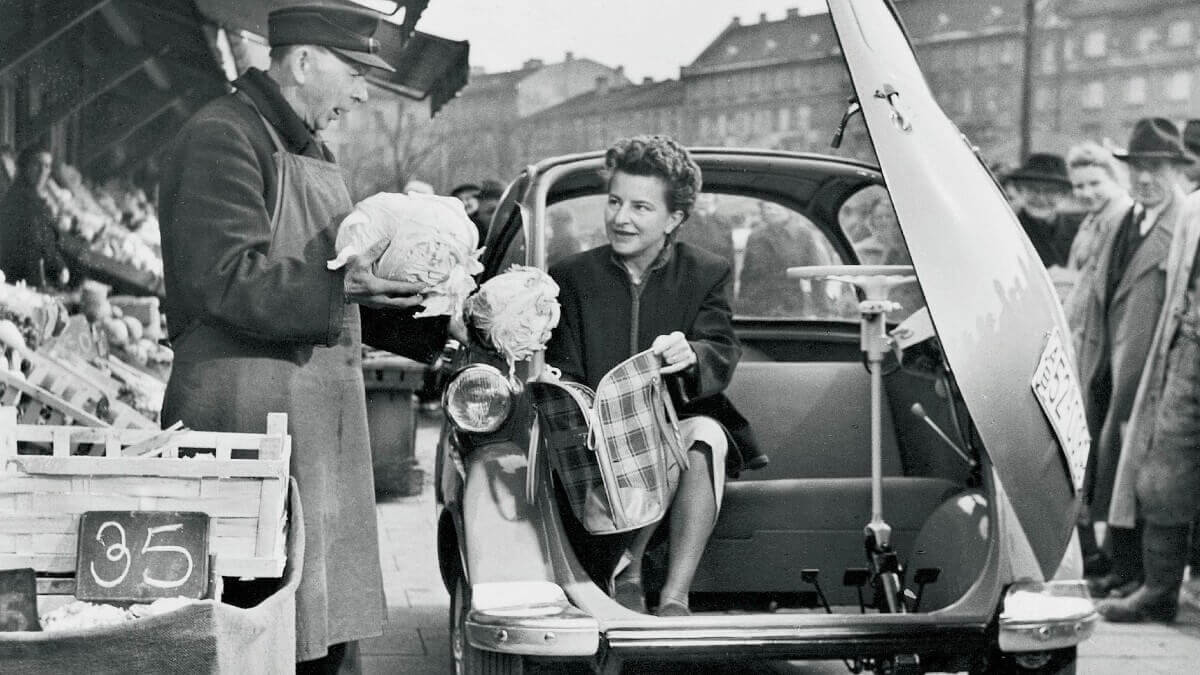 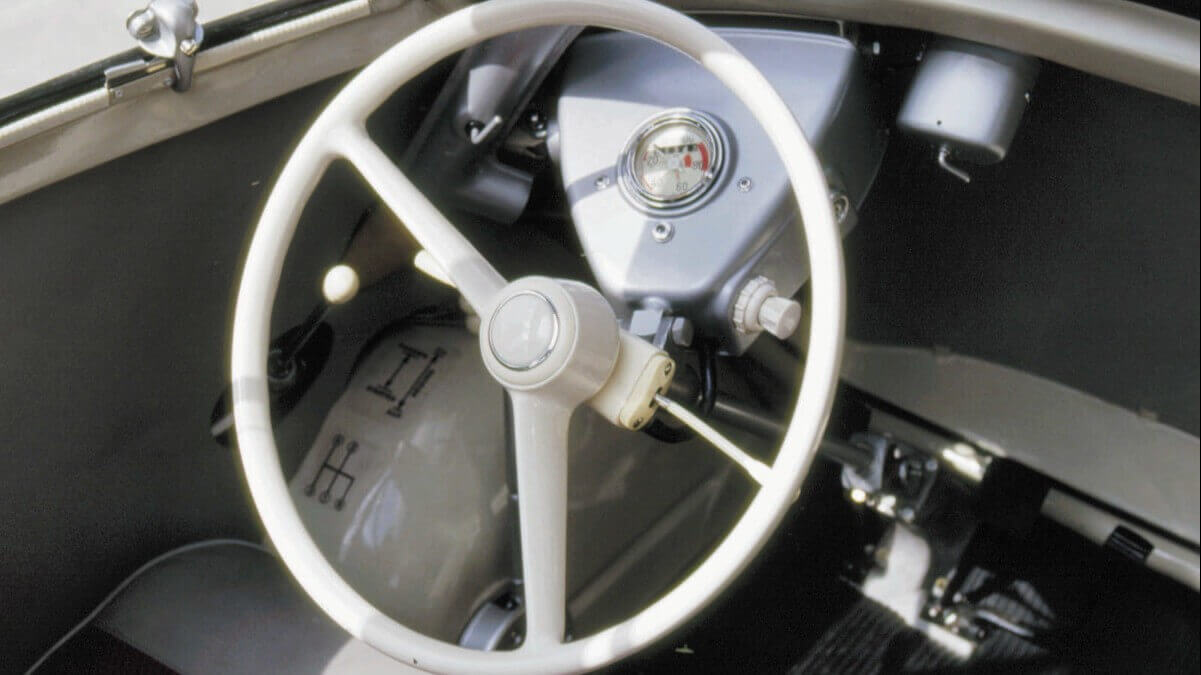 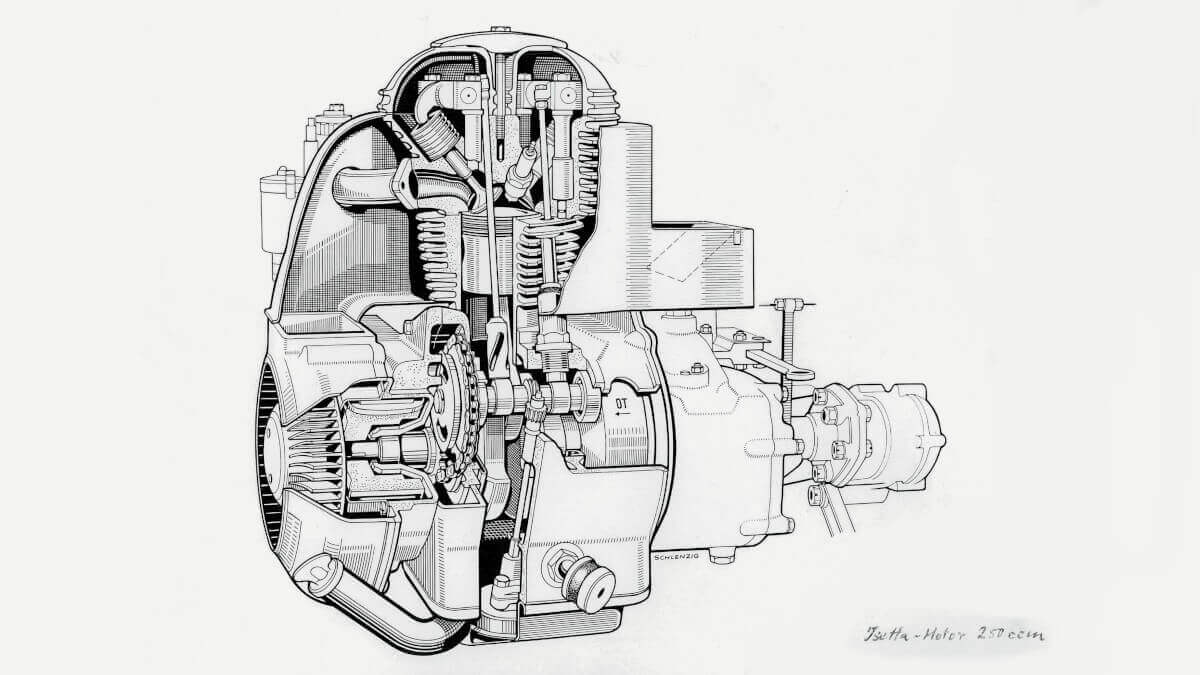 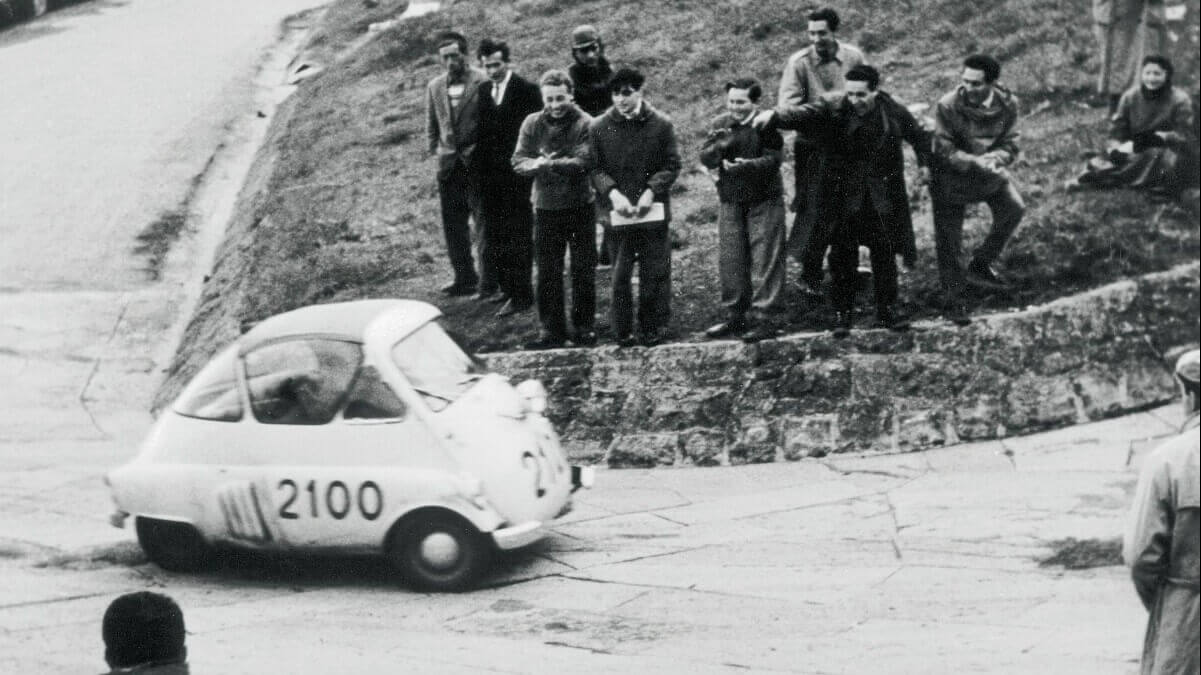 This step isn’t so unusual if you look at how BMW had generally started building cars. The Dixi was taken over by the bought-out Fahrzeugfabrik Eisenach AG and was nothing more than a modified licensed construction of the Austin Seven. Now, however, one didn’t look northwards but southwards, where, on the other side of the Alps, one could see Renzo Rivolta’s refrigeration and air conditioning manufacturer Iso. Renzo Rivolta had his engineers Ermenegildo Preti and Pierluigi Raggi, both from the aircraft industry, develop an unusually designed micro car called Iso Isetta with a large door at the front and an equally large fabric sliding roof and put it into series production in 1953. To make it easier to get into this vehicle, the steering wheel folds out on a specially suspended steering column with the door facing outwards. Inside, the bench seat offered space for two adults, while behind it, above the engine, there was a large storage area for luggage of all kinds. One of these vehicles even competed in the Mille Miglia. A delegation from BMW saw the Iso Isetta at the Turin Motor Show in 1954 and was able to persuade Renzo Rivolta to sign a license agreement, after which one vehicle was sent to Munich to understand the design and improve it in details. In fact, the contract with Iso allowed BMW to put in improvements and to install their own engines. As a motorcycle manufacturer, BMW naturally took advantage of this. A single-cylinder engine with a starter alternator and fan cooling system was equipped to the Isetta and drove the rear axle. For some countries such as Austria or Great Britain (where Brighton had a license to build the Isetta), where were versions with only one rear wheel, as this allowed customers to register it as a motorcycle.

The premiere of the BMW Isetta 250 Motocoupé took place in March 1955 at a basic price of DM 2,580. In December of the same year, the Isetta 300 was added to the range, whose number indicated the larger displacement and an increase in power from 8.8 kW/12 hp to 9.6 kW/13 hp. Power was transmitted by an unsynchronised four-speed gearbox with reverse gear. The early vehicles can be recognized by a panoramic Plexiglas rear window, large side windows and triangular windows next to the door that could be opened. In addition, there were a few examples as convertibles with a fabric soft top instead of the rear window. Alternatively BMW also offered a pickup version as a light commercial vehicle. In October 1956 a completely modified version was released with sobriquet ‘Export’, with considerably larger side windows and a smaller rear window. The convertible remained in the portfolio, but the pickup version was dropped due to lack of demand.

In the end, the Isetta averted the threat of insolvency at BMW long enough and created financial reserves to develop new models. The first of these was the BMW 600, which, although its main features were reminiscent of the Isetta with its large front door, was already moving towards a full-fledged car and allowed access to a rear seat bench through a side door. This was followed by the 700 and finally, in 1961, the ‘Neue Klasse’ (New Class), with which the brand was finally able to establish itself. It almost didn’t come that far. On December 9, 1959 there was a general meeting of all shareholders to discuss the possible sale of the company to Daimler-Benz AG. Errors in the balance sheet and a rejection front from small shareholders finally ensured that this step desired by Deutsche Bank could be prevented. A total of 161,728 copies of the Isetta had been produced by May 1962. The original Iso license agreement allowed BMW to export the Isetta to Austria, Switzerland, and Scandinavia. The later Export version, however, also reached the USA and Canada with larger sealed beam lights and, with additional air intakes in the door, also tropical countries. At the same time there were other licensees of Iso such as Vélam (France), Iso España (Spain), Moorkens (Belgium) or Indústrias Romi (Brazil), the latter company later building the BMW Isetta under license.