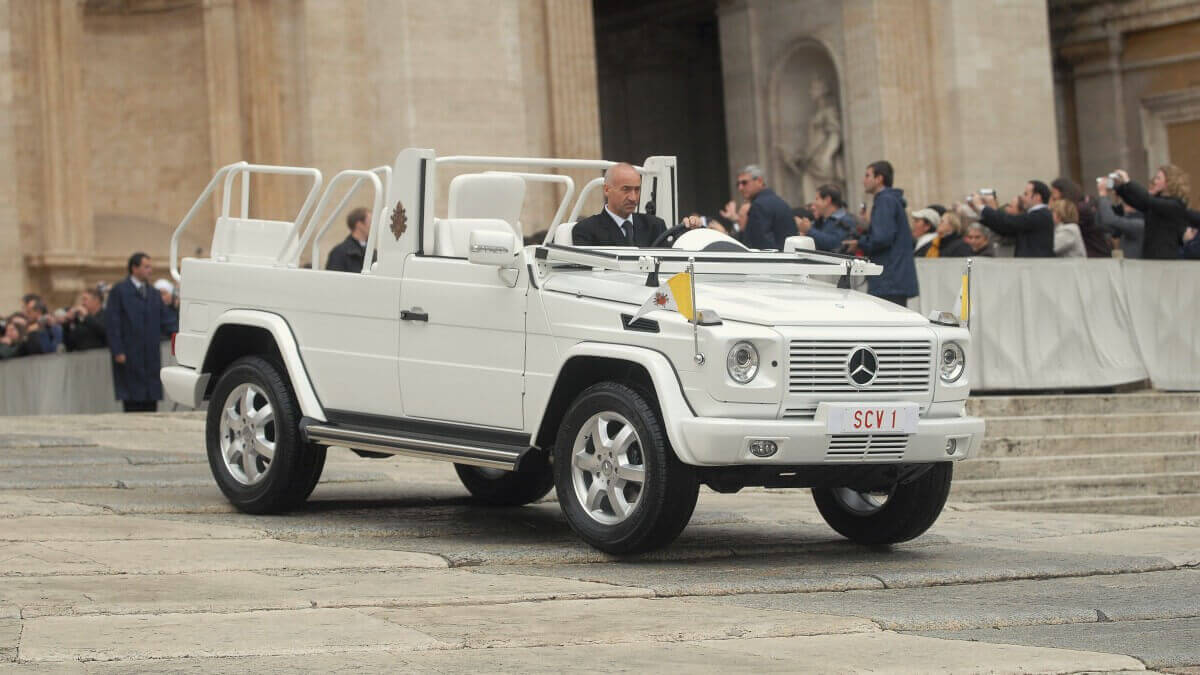 As head of the Catholic Church, His Holiness the Pope has relied on his own cars since the late 1910s, most of which are very comfortable and luxuriously equipped. Up to 1979, these were exclusively high-quality, black limousines, in whose rear was often only a throne-like seat. Pope John Paul II announced a visit to Germany for the period from November 15 to 19, 1980 – the first pope visit in about 200 years. For the planned parades through Munich, Mainz and Cologne, Mercedes-Benz prepared a new car, which for the first time appeared not in black but in pearl white with gold accents. On the basis of a 230 G, an open vehicle was created which corresponded to the base up to and including the front doors. However, the special vehicle construction department removed the roof and installed an independently designed area in the rear on a 40-centimeter raised flat floor with a seat and standing area for the Holy Father.

The handrail in gold-plated brass could be inserted into the raised rear doors and the partition wall to the cockpit. Alternatively, a high, transparent cover made of plastic glass could be fitted to the rear of the vehicle to protect the Pope from wind and rain. Indirect sources of light were integrated into the floor, sides and roof of this dome, through which the Holy Father was still clearly visible in the evening. A powerful air-conditioning system was to ensure that it didn’t get too hot under the glass dome in summer temperatures. At the same time, it prevented fogging in rain and high humidity. The 4.39-meter long, 1.95-meter wide and 2.8-meter high car was quickly given the nickname ‘Popemobile’, but at first only went to the Vatican on loan. There it received the registration number SCV7. Mercedes-Benz made no changes to the technical basis of the 230 G, which provided a power output of 75 kW/102 hp, which was transferred to the permanent four-wheel drive system via an automatic gearbox. 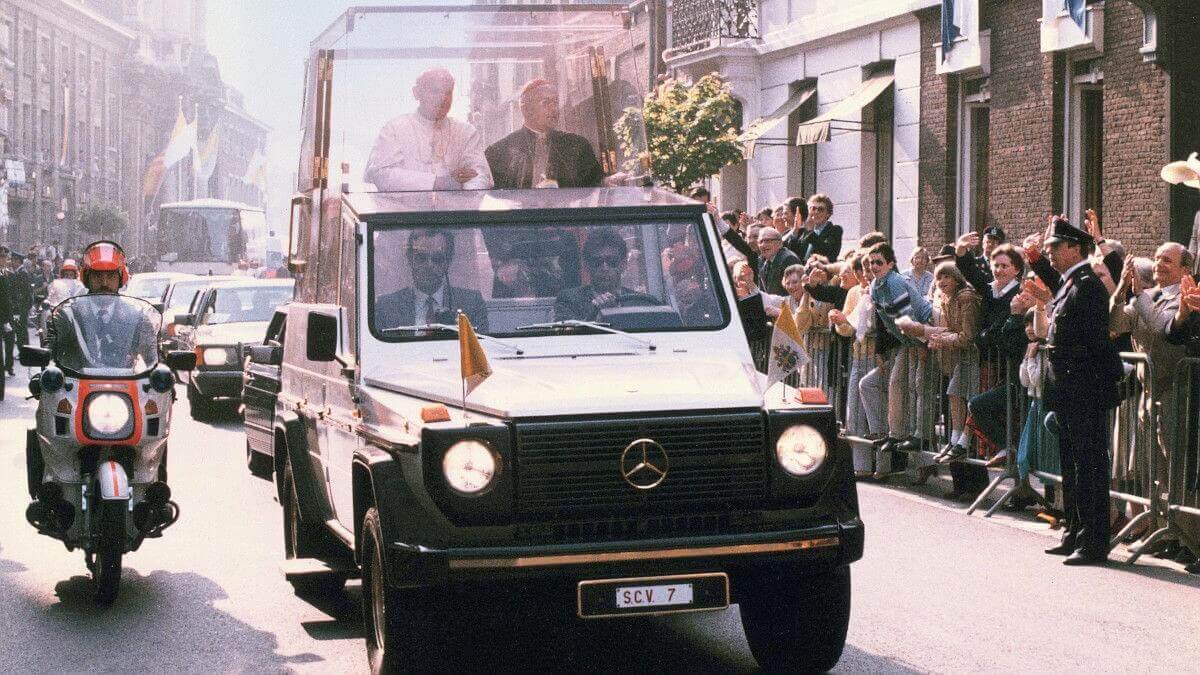 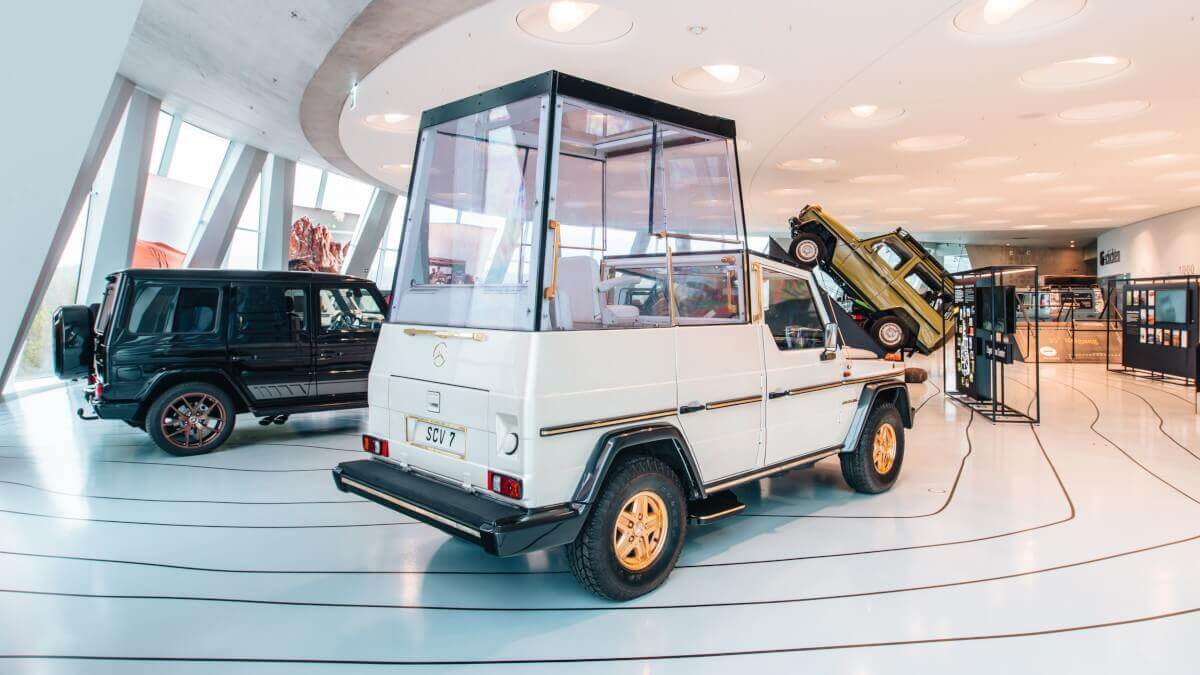 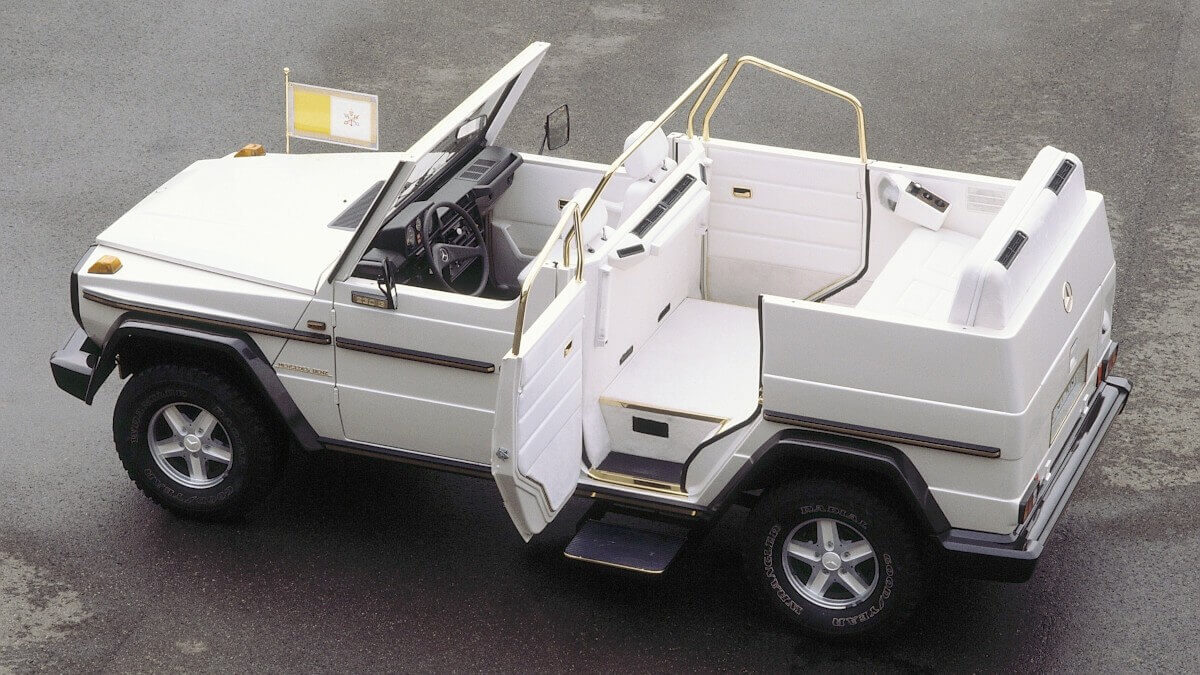 After the assassination attempt on Pope John Paul II, the Popemobile was converted to a glass dome with bullet-proof glass in 1981. In 1983 and 1985, further adaptations were made to meet updated security requirements from the Vatican. During the Pope’s visit to Austria in 1983, the Mercedes star in the radiator grille was exchanged for the Puch brand logo, as the G series model was marketed there by this brand. Even today, all G series models are still produced at Magna Steyr (formerly Steyr-Daimler-Puch) in Graz. 1982 saw the creation of a second, almost identical Popemobile based on the 92 kW/125 hp 230 GE, to which the license plate SCV6 was fitted. In the same year both cars finally passed into the possession of the Vatican, which however returned the first vehicle to the Mercedes-Benz Museum in 2004. In November 2007, a G 500 with open bodywork and folding windshield was built, which is used with the Vatican license plate SCV1 during Pope visits worldwide.