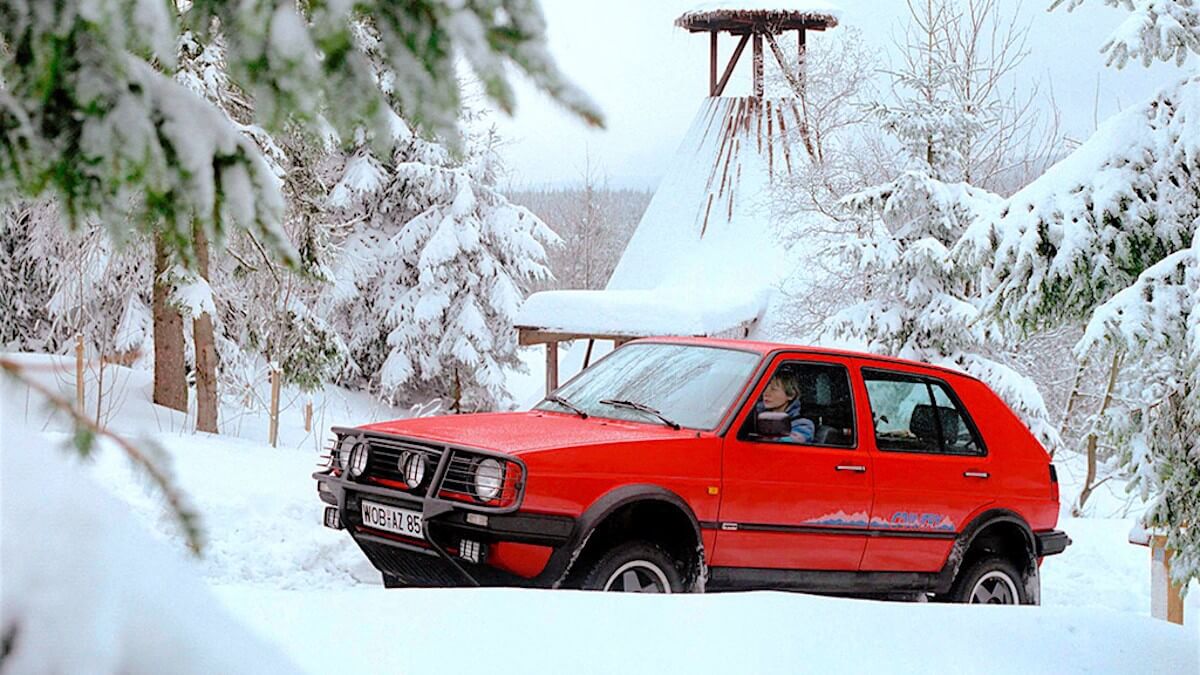 At the Geneva Motor Show in 1989, Volkswagen presented a concept car that answered a question nobody had asked: what does a Golf for off-road use look like? Together with Steyr-Daimler-Puch (now Magna Steyr) in Austria, a body of a four-door Golf II was placed on a tubular frame raised by 120 millimeters, and then the normal floor assembly of the four-wheel-drive Golf Synchro was mounted on reinforced springs and dampres underneath. The result was called the Golf Montana. This vehicle was simply meant to be a thought experiment without ever going into series production. However, within a very short time, various advance orders were received at the completely overstrained Volkswagen dealers, some of whom didn’t even know of the existence of this car. Nevertheless, these unexpected reactions prompted the car manufacturer from Wolfsburg to consider series production and finally to tackle the project together with Steyr-Daimler-Puch. After the concept car was also shown at the IAA (Frankfurt Motor Show) 1989, further advance orders were received and strengthened VW’s decision to launch a small production series.

This started in April 1990 and was very complex. First of all, a Golf II CL Synchro with the 72 kW/98 hp and 143 newtonmeters strong four-cylinder engine was built at the main plant in Wolfsburg, Germany, in the exterior color requested by the customer. Then this vehicle was transported by truck to Graz in Austria, some 930 kilometers away, where the above-mentioned conversion measures were carried out at Steyr-Daimler-Puch. In total, the Golf increased in height by around 18 centimeters, while the ground clearance increased by only 63 millimeters. The overall result then went out to the dealers as the Golf Country. Customers were surprised by a basic price of DM 33,225 in Germany due to this unusual production process. An amount nearly unimaginable for a compact car at that time. In return, however, in addition to the raised position and the Synchro four-wheel drive system, the car was equipped with a ram protection with two auxiliary lights as well as an engine guard at the front and an external spare wheel on a bracket that swivels to the left at the rear. Although the looks promised adventures off-road, the Golf Country, like many of today’s SUVs, came without differential locks and on normal road tyres, which severely limited its off-road capability. Moreover, the Golf II, as the basis for this vehicle, was already approaching its replacement by the Golf III. 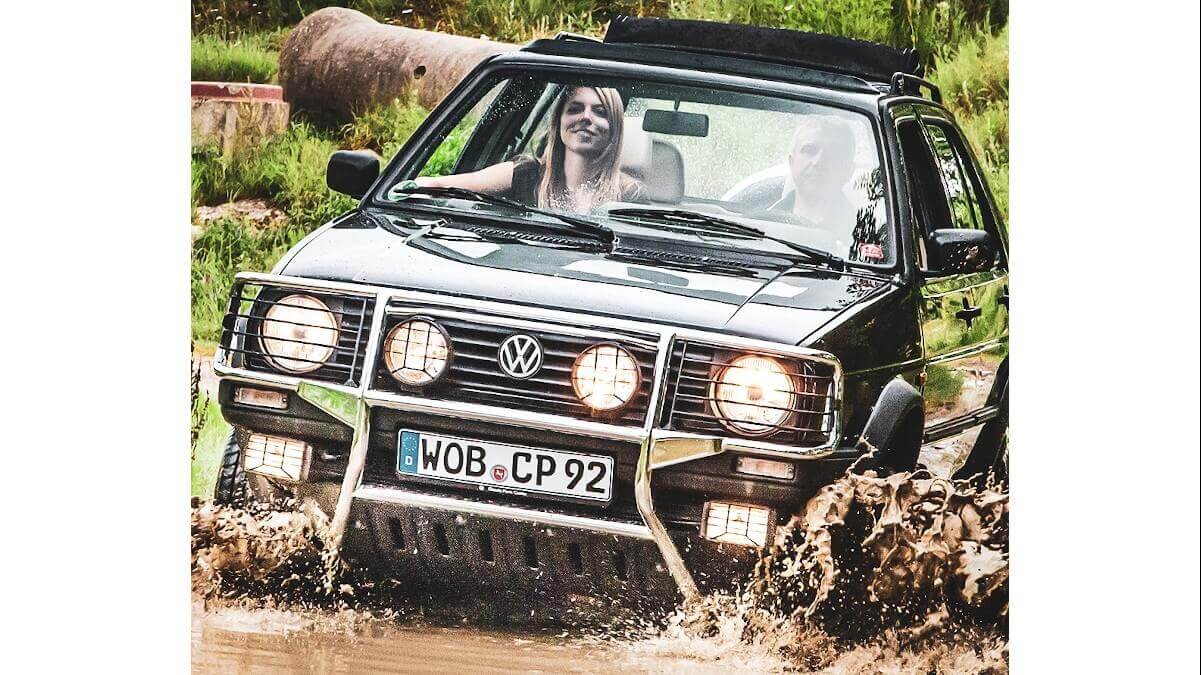 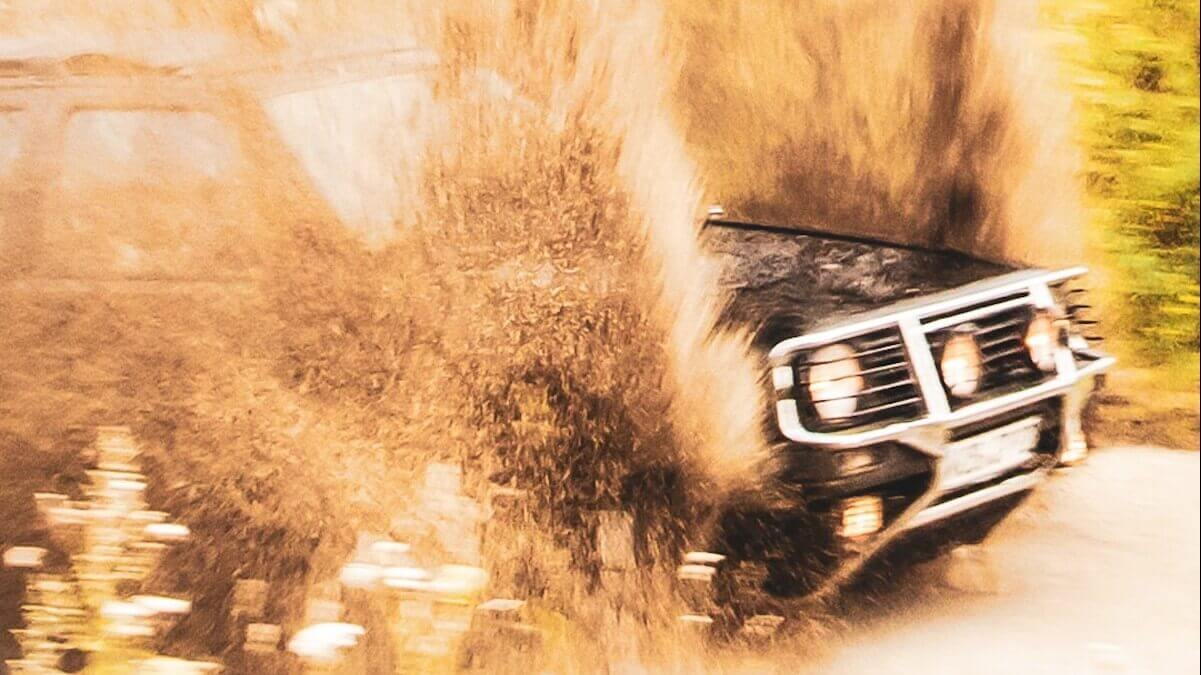 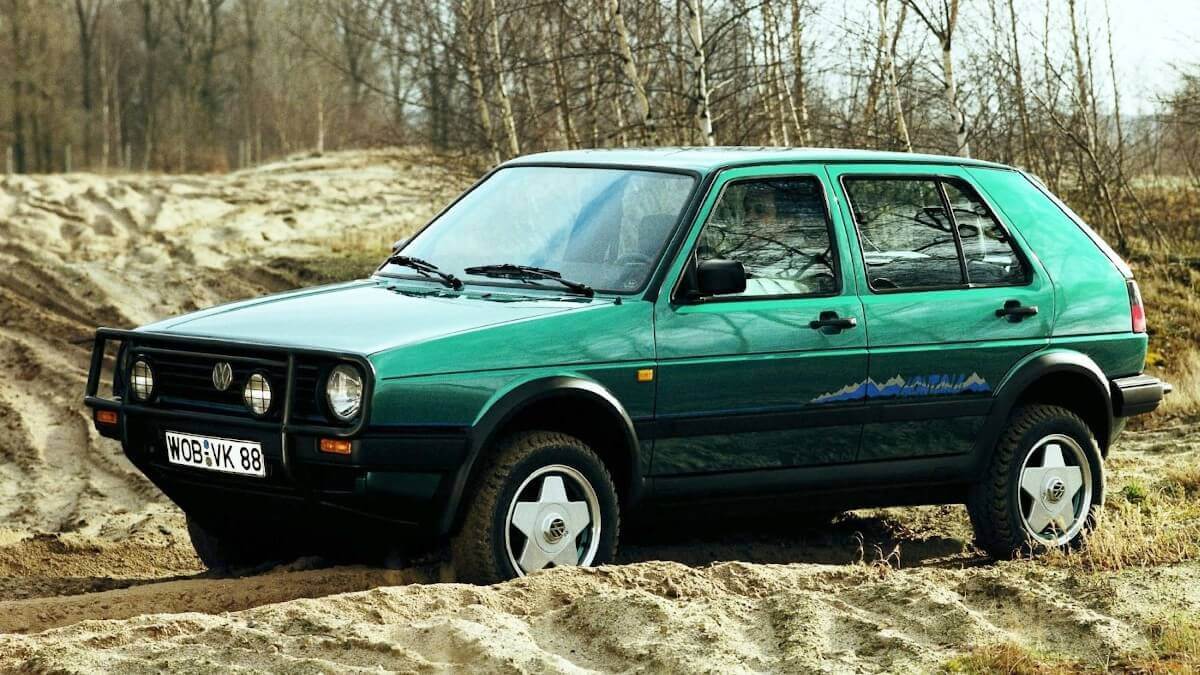 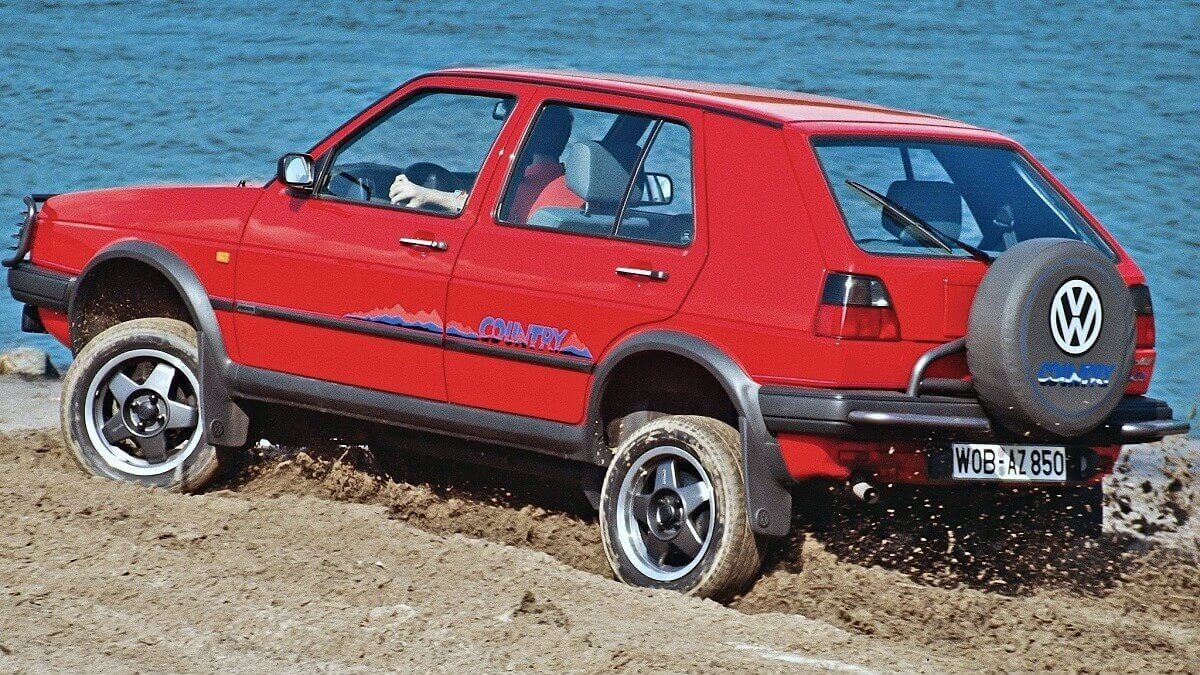 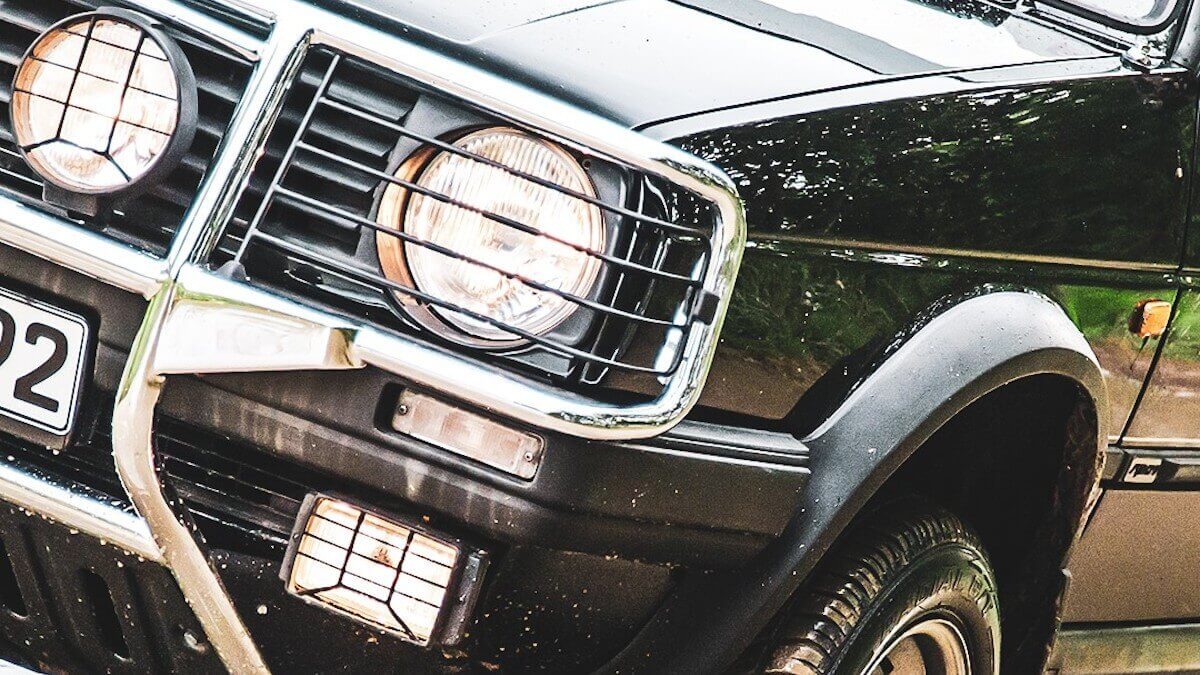 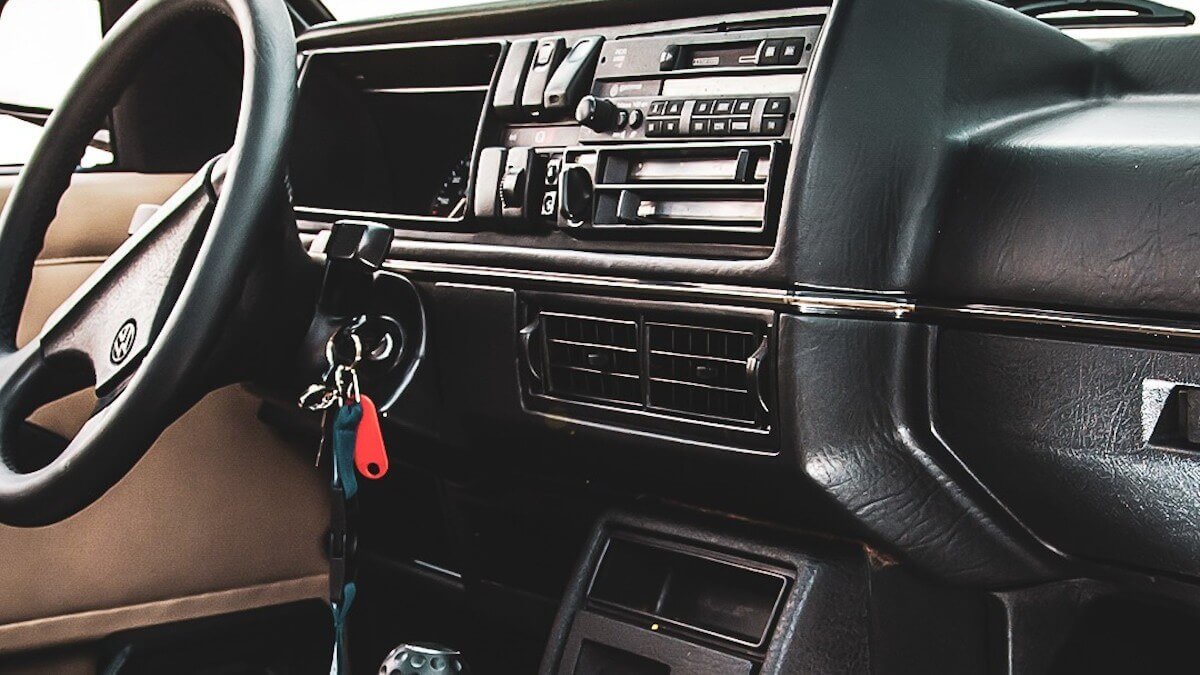 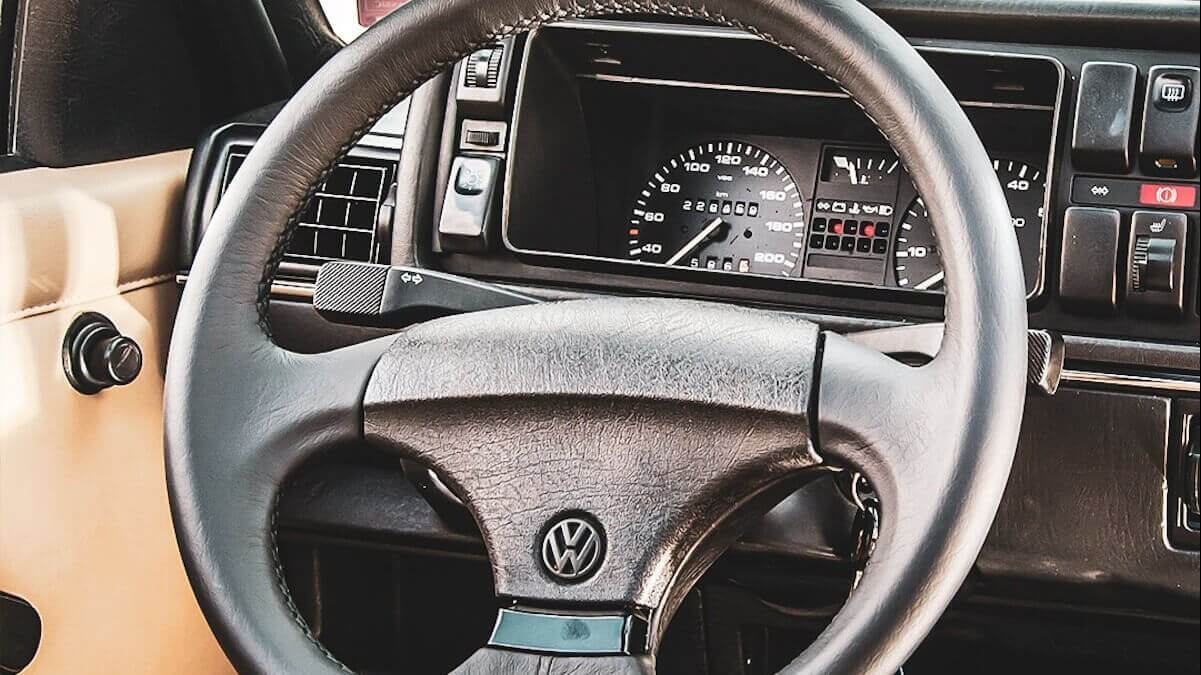 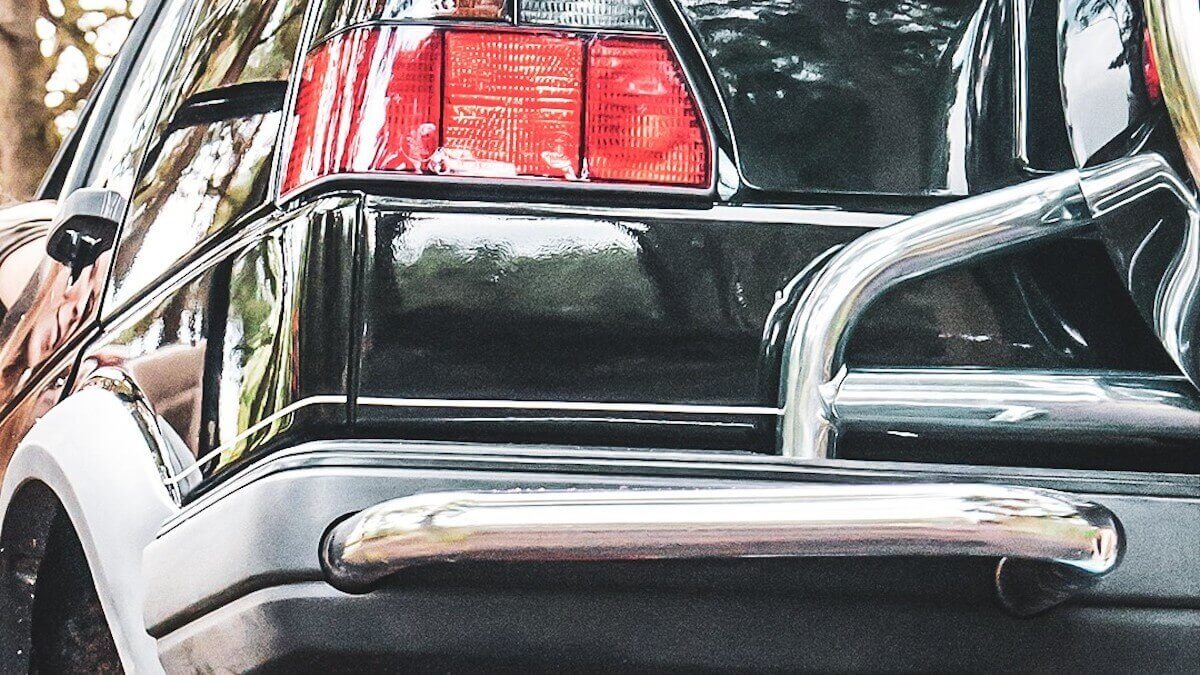 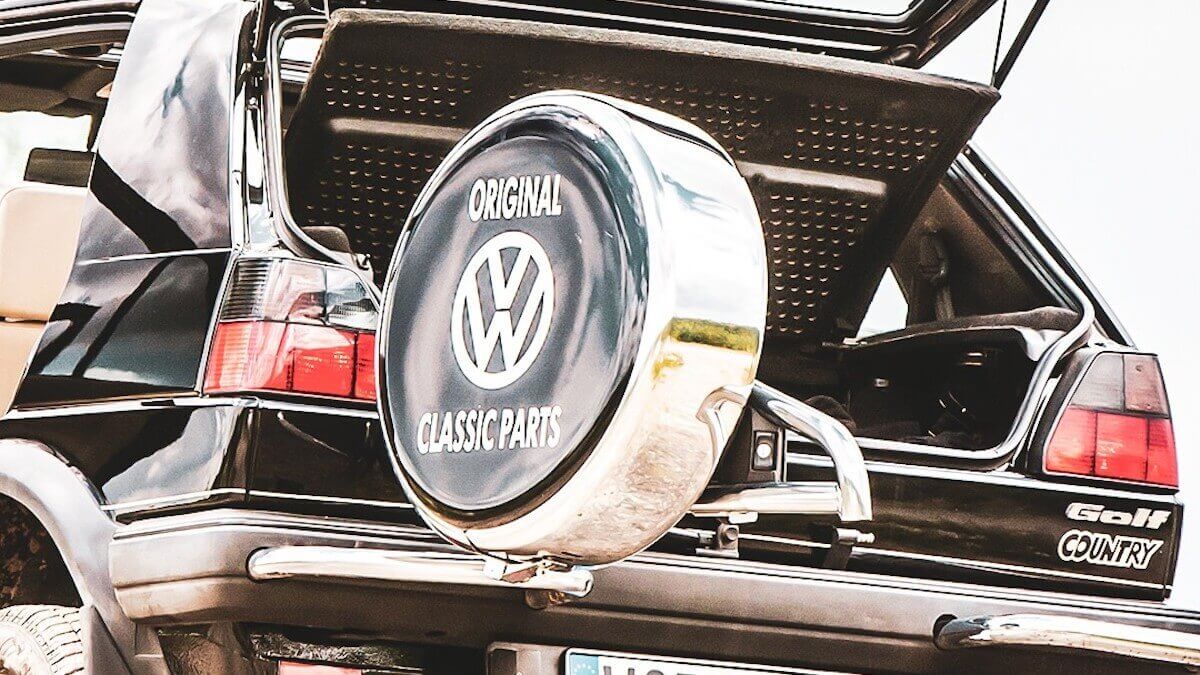 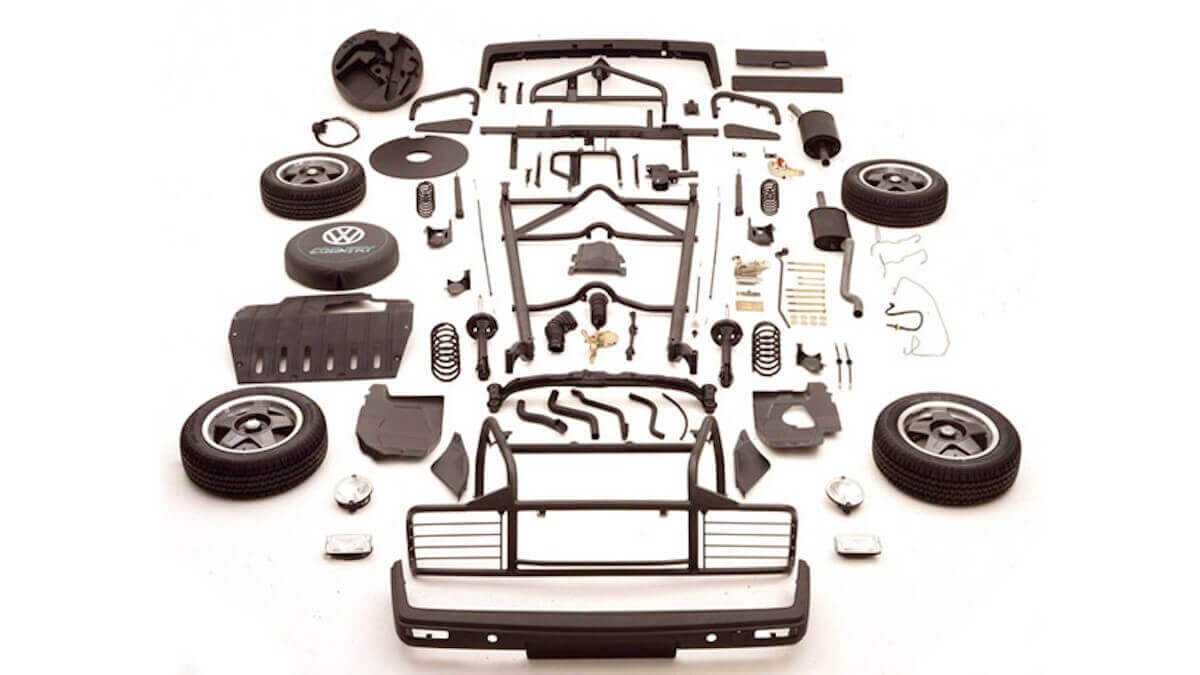 In order to recover some of the development costs, VW pushed the Golf Country Allround with less comfortable equipment for DM 31,825 to the dealers as early as July 1990. Instead of sports seats and a four-spoke steering wheel, it received artificial leather upholstery and steel wheels. Next to that, it was only available in ‘Forest Green’. But even this attempt to reach hunters, foresters and farmers living far away from tarmac roads was a huge failure. Only 160 copies of this variant were produced. Instead, the team in Wolfsburg started to try the opposite direction at the beginning of 1991 and, with the Golf Country Chrom Edition, which was only available in black, deliberately addressed lifestyle customers who probably prefer to drive this vehicle in the urban jungle rather than in the city forest. For this purpose, the wanna-be off-roader received beige leather seats, a large folding sunroof from Webasto and various eponymous chrome trim parts at a basic price of DM 42,060. Interestingly enough, 558 units of the Chrom Edition were produced nevertheless.

The Golf Country GTI, which was produced only 50 times for high-ranking VW employees, remained considerably rarer. Next to that, there were various other motor versions including diesel engines which were tried out in road tests by the development department but were ultimately not adopted into series production. In October 1991, the final vehicle of a total of 7,735 rolled out of the Steyr-Daimler-Puch production hall. From today’s point of view, the Golf Country anticipated a trend that nobody else saw coming in 1990. Today it is taken for granted that children are driven to kindergarten or school in an SUV and even senior citizens appreciate the high seating position of cars like the VW Tiguan, which wasn’t presented until 16 years after the production of the Golf Country stopped. During its production period, however, the Golf Country was neither fish nor meat and was ridiculed by many observers.