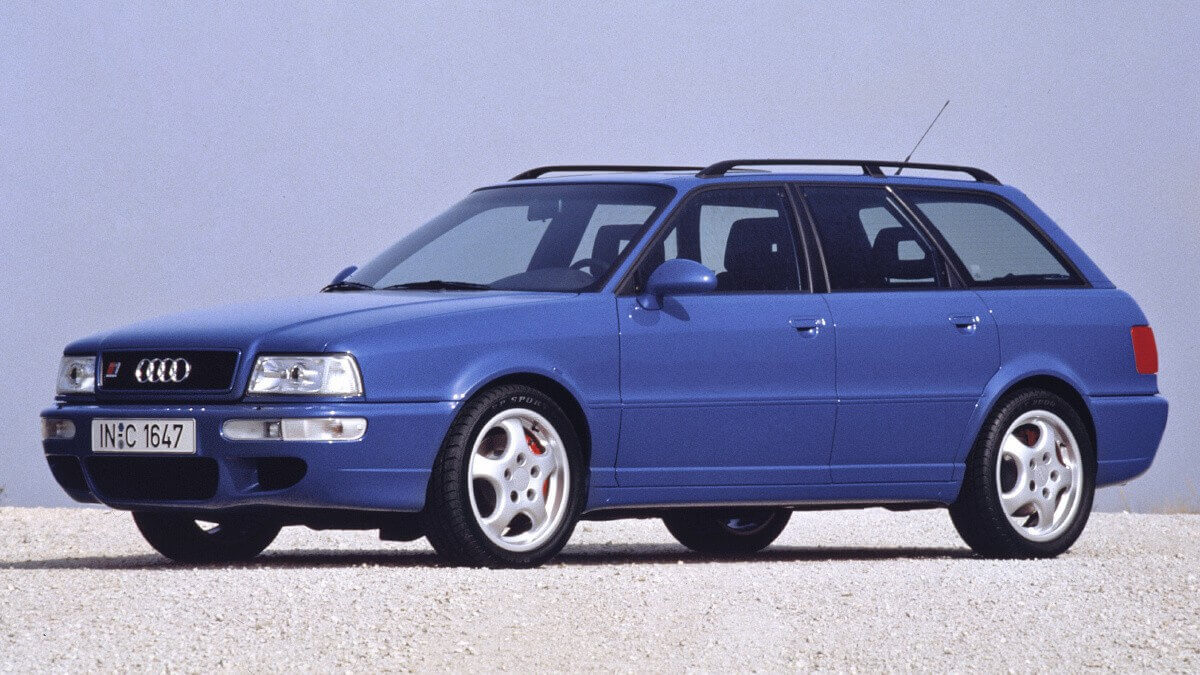 Already since 1990, Audi offered the S2 as their first street-legal sports model with a ‘S’ in its model name. In addition to the S2 Coupé, which was offered as the official successor of the legendary quattro Coupé in the sales brochures, there were also the S2 sedan and the S2 Avant (station wagon). However, due to ongoing customer demand, the team in Ingolstadt decided to develop an even stronger version. At the same time, sports car manufacturer Porsche had a very tough time. The production lines of the 911 (964), 968 and 928 GTS were underutilized due to low demand. So the Audi engineers where met with open ears, when they asked for a development cooperation to create the most powerful Audi to that date. Not only that, Porsche also offered to produce the car in Stuttgart Zuffenhausen.

Technically, they used the 2.2-liter inline five-cylinder engine with 20 valves from the S2 as a base and increased the performance through a new turbocharger, an enlarged intercooler, a modified intake system, a new exhaust system and a new ECU to 232 kW/315 hp and 410 newtonmeters of torque. This power is distributed via a manual six-speed gearbox to the permanent quattro all-wheel drive with Torsen intermediate differential and manually engageable rear-axle limited slip differential. The latter automatically releases from a speed of 25 kph. After 5.4 seconds, the sporty station wagon reaches 62 mph, after 22.7 seconds it is up to 124 mph and the topspeed is at 162 mph. For the chassis they developed casted control arms instead of the sheet metal parts used in the normal Audi 80 Avant. Porsche contributed a high-performance brake system with four-piston calipers on the front axle painted in red with white Porsche lettering. After only a few months of production, the brake discs on the front axle were enlarged from 304 to 332 millimeters of diameter, parts of the Porsche 911 (993) Turbo. New shock absorber characteristics and a slight lowering as well as 17-inch wheels with Porsche rims from the 911 (964) and 245/40 tires complete the package of the resulting RS 2 Avant. 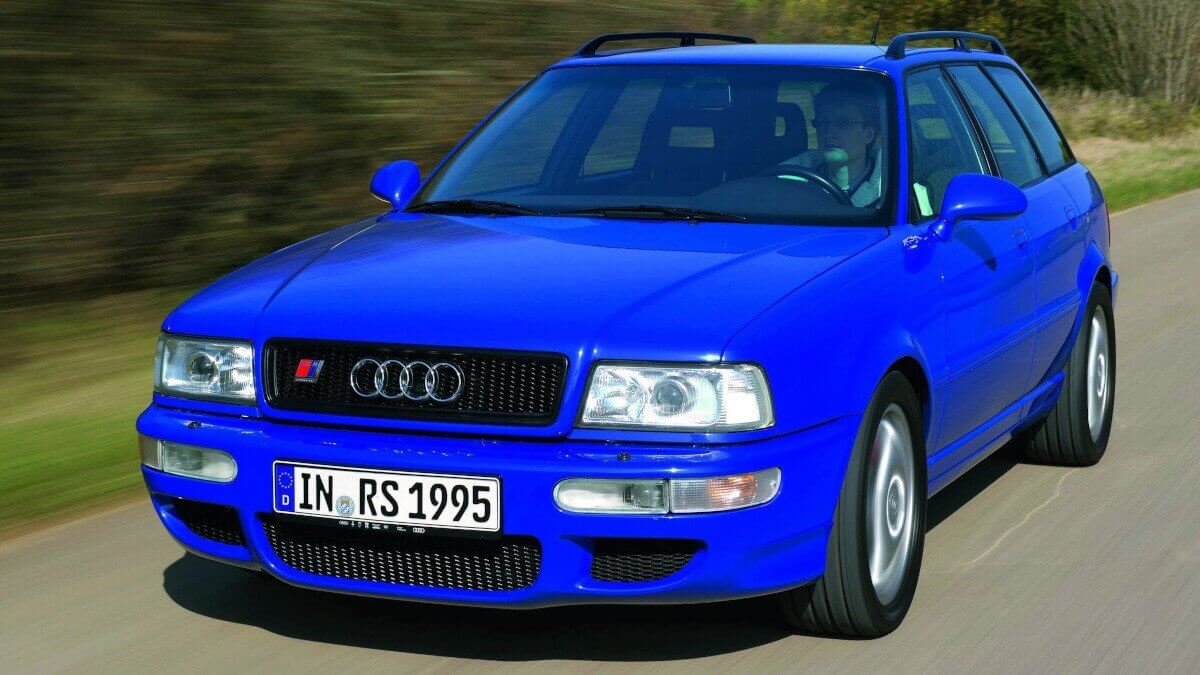 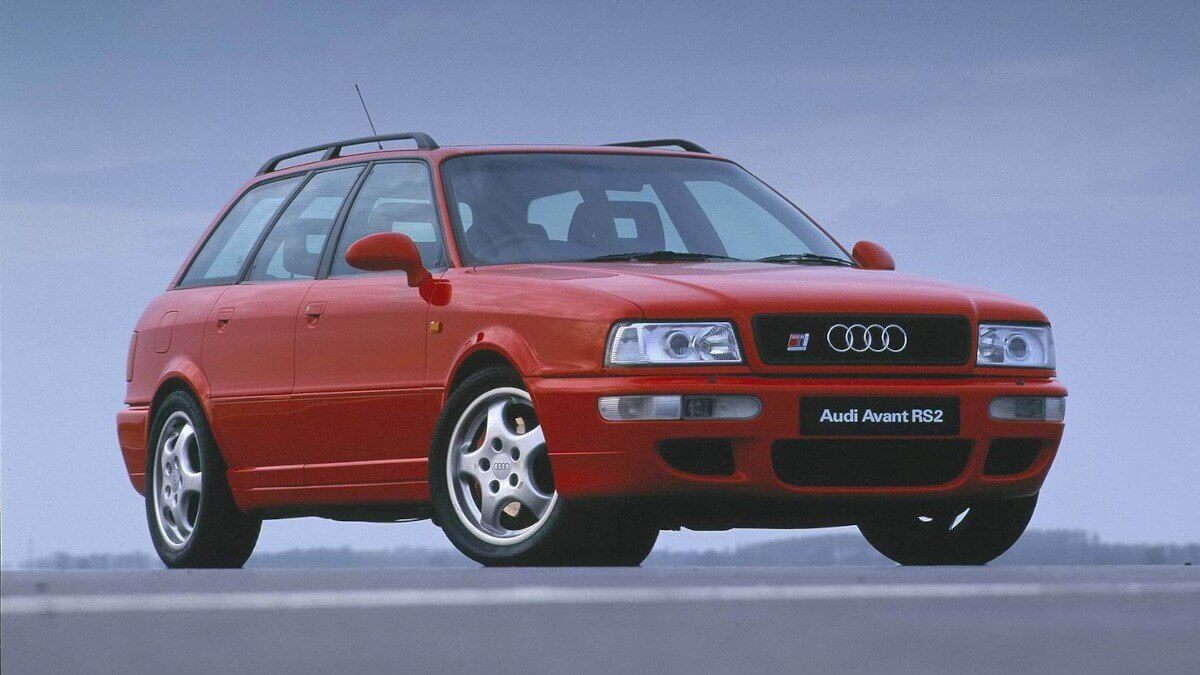 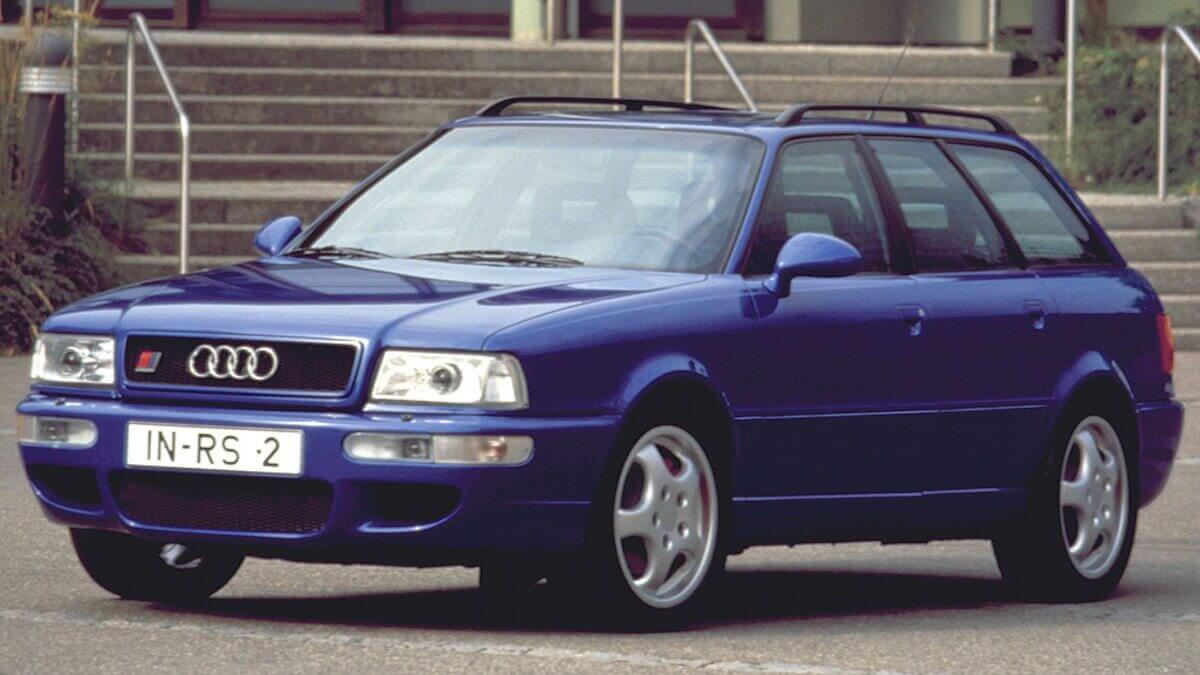 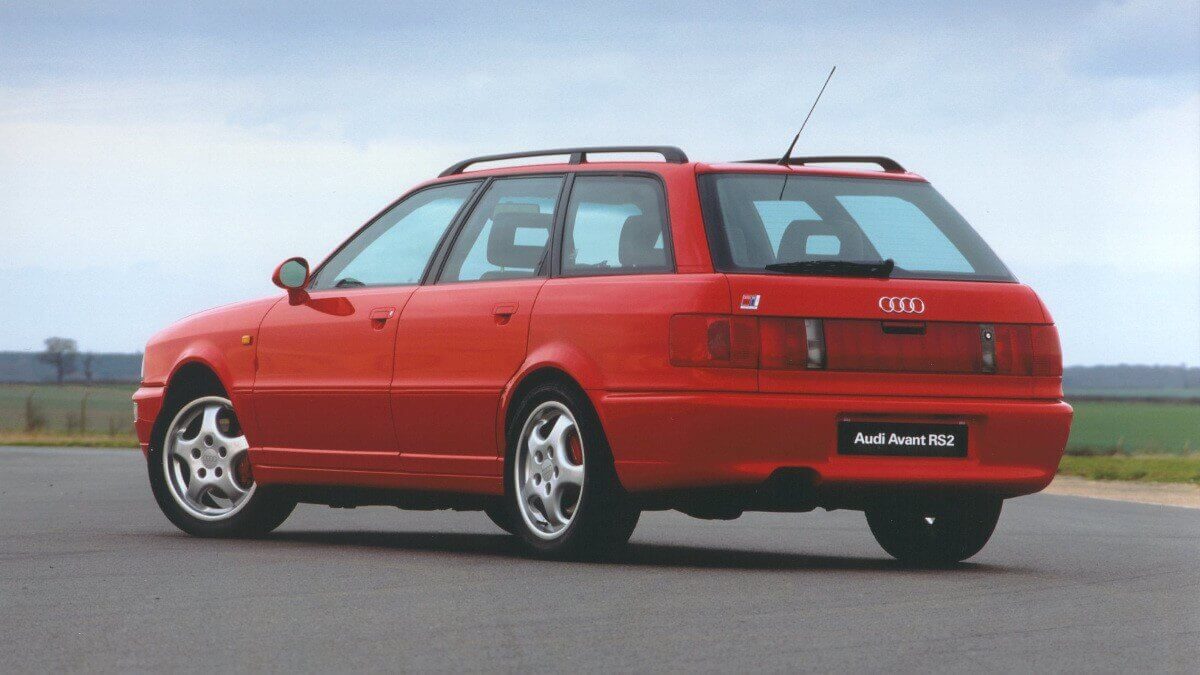 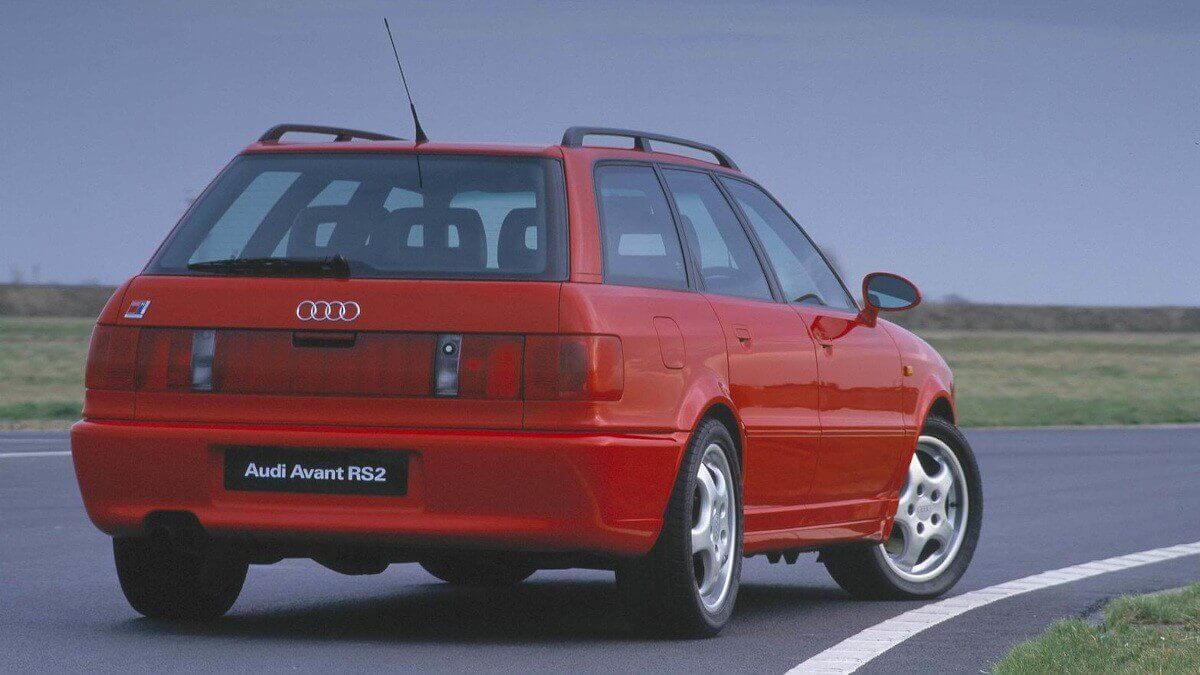 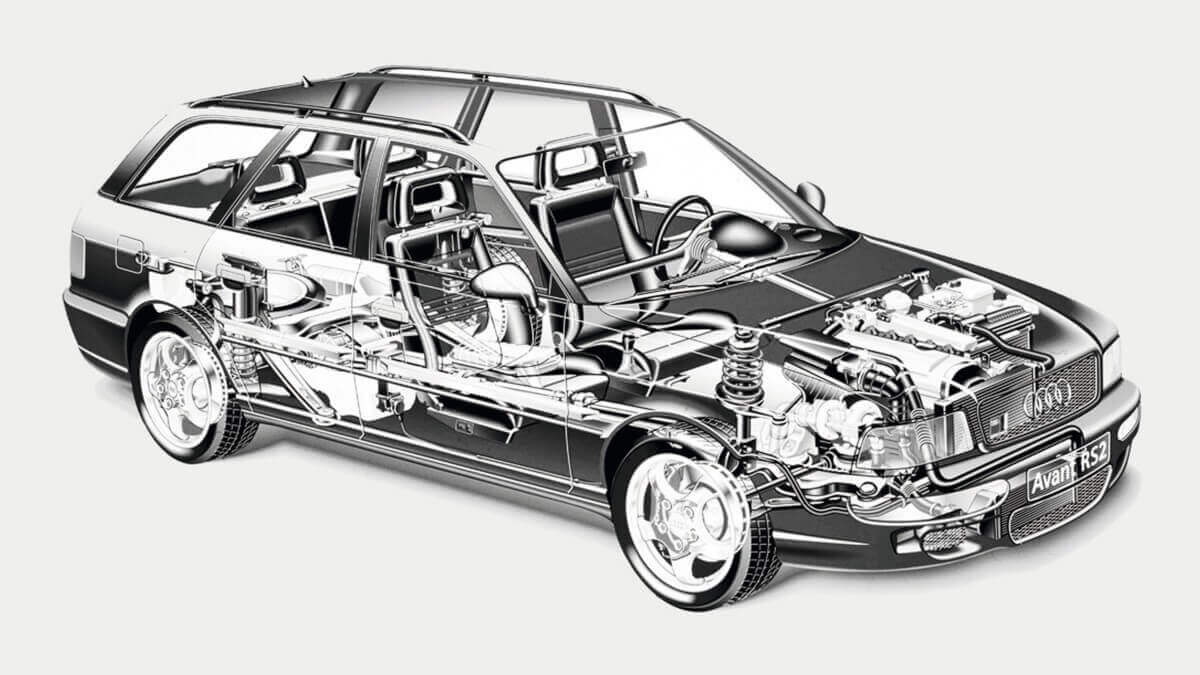 On the body side, the RS 2 used the body shell of the Audi 80 Avant og the B4 series. However, together with Porsche, they designed new body-colored bumpers on the front and rear. At the front, the turn indicator units of the 911 (993) was integrated, while the side mirrors come from the 911 (964) Carrera RS and 911 (993). The front air intakes are parted into three and ensure good air flow to the intercooler and to the front brakes. At the back the licenseplate moved down into the bumper, while its space at the trunk lid was filled with a new panel styled like the taillights, so there is a wide light band, inspired by the Porsche 911 models of the time. In the radiator grille and at the tailgate there are RS 2 logos with integrated Porsche lettering. The customers could choose between eleven different paint colors, however, only the blue presentation hue of the Audi RS 2 Avant became legendary.

Depending on the selected exterior color Audi tuned the interior color. While the dashboard, the steering wheel and the outer panels of the front seats and rear bench were always in black leather, the Alcantara seat center panels, the steering wheels spokes and the door panels were either RS Blue or Silvergrey. On special request there was also a completely black silk nappa leather interior available. The sports steeringwheel was a component of the then up-to-date Audi safety system Procon-ten, which provided an increase of passive safety by a retraction of the steering column and a tightening of the safety belts during an accident. It was the time before airbags became mandatory. For an extra charge, Audi offered the RS 2 Avant for the first time with an airbag in the steeringwheel. The dials of the analogue instruments are white and the decorative trim shows carbon fiber. The standard equipment included power windows and a clening system for the headlights, while the optional extras included an automatic climate control, electric sunroof, cruise control, passenger airbag and a mesh partition between the rear seats and the trunk.

Altogether, originally 2,200 units were to be built for a basic price of 98,900 DM in Germany. Ultimately, by 1996 2,891 copies had left the production line in Zuffenhausen. Among them were four RS 2 sedans, which were never officially offered by Audi, but were developed for special VIP customers in the United Arab Emirates. The prototype sedan is to this day part of the in-house vehicle collection and can be seen every now and then in the Museum Mobile in Ingolstadt.