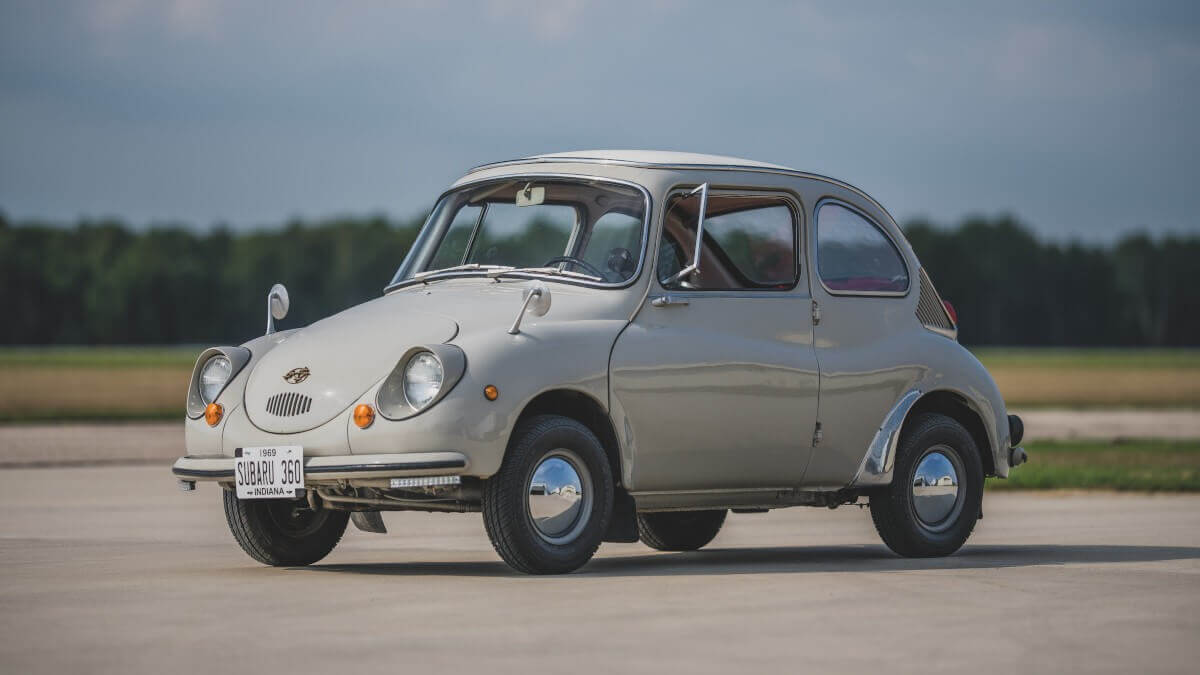 Why do you know the Japanese car brand Subaru? Probably most readers now answer: “For vehicles with four-wheel drive”. Correct, but not all-encompassing. After all, the BRZ sports coupé (GT86 as a Toyota), which was developed and produced together with Toyota, is only available with rear-wheel drive. Four-wheel drive was introduced to the model range in the Leone in 1972, but the brand history goes back further. On July 15, 1953, the Fuji Heavy Industries company was founded in Japan from six former components of the aircraft manufacturer Nakajima Hikōki, which was crushed by the Americans after World War 2 and whose company history dates back to 1917. Through the six former parts of the old company, which were now reunited, the new brand name ‘Subaru’ was born, which means ‘to join together’ or ‘unite’. Subaru is also the name of the Pleiades constellation, of which the six brightest stars can be seen in Japan. This is also how a company logo was created, in which the six stars are indicated. In the following decades Fuji Heavy Industries developed into a large manufacturer of buses, trucks, airplanes, agricultural machinery and cars as well as a supplier to other aircraft manufacturers such as Boeing in the USA. In the 1990s the company was also involved in the construction of the Japanese space shuttle ‘Hope X’. Since 2005 Toyota holds a minority stake in the company, which was renamed into ‘Subaru Corporation’ in 2017.

A first car was built as early as 1954 with the prototype P1 1500, a lower-middle class sedan with a self-supporting body, independent suspension at the front and a rigid axle at the rear. Visually, this vehicle was very similar to the Peugeot 403, which was a good match for the four-cylinder engine from the Peugeot 202 used under license. Some cars used an own Subaru engine. A total of only 20 examples were produced, six of which were tested in everyday use by the taxi company Isesaki Ota Honjo. Despite positive feedback, the P1 never went into production. Instead, Subaru developed a four-seater small car as their first production vehicle, which went on sale as the 360 from 1958. Visually, various sources of inspiration can be discovered, such as the Volkswagen Beetle or the Fiat 500, although the Japanese brand still created independent details. The doors extend to the front wheel arches and open to the rear. Glass fibre reinforced plastic was used for the bodywork. In Japan it was nicknamed the ‘May Bug’. In addition to the two-door sedan with a fixed roof, there was also a convertible as well as a station wagon and, from 1961, the small van Sambar. 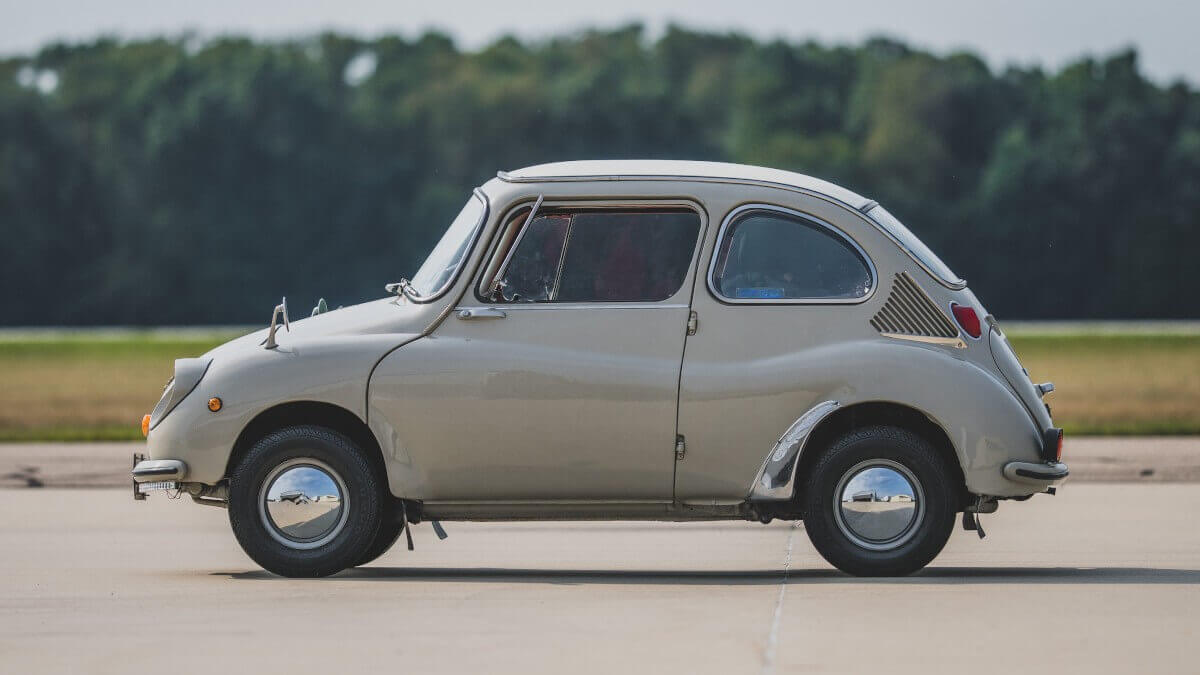 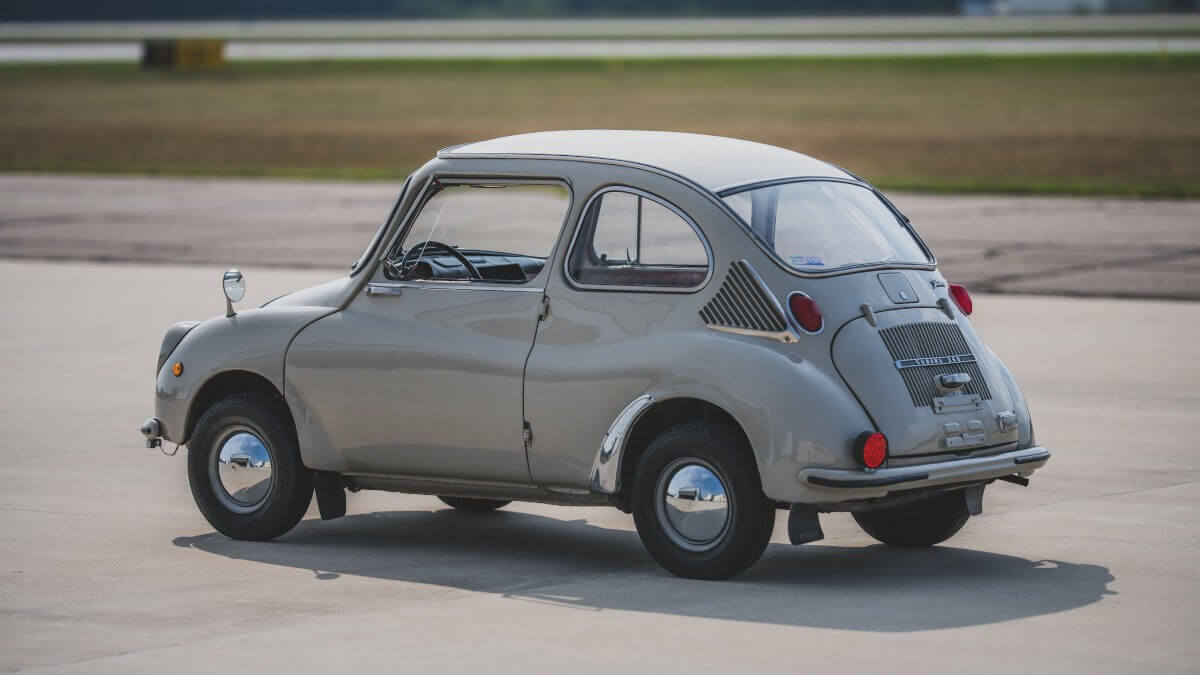 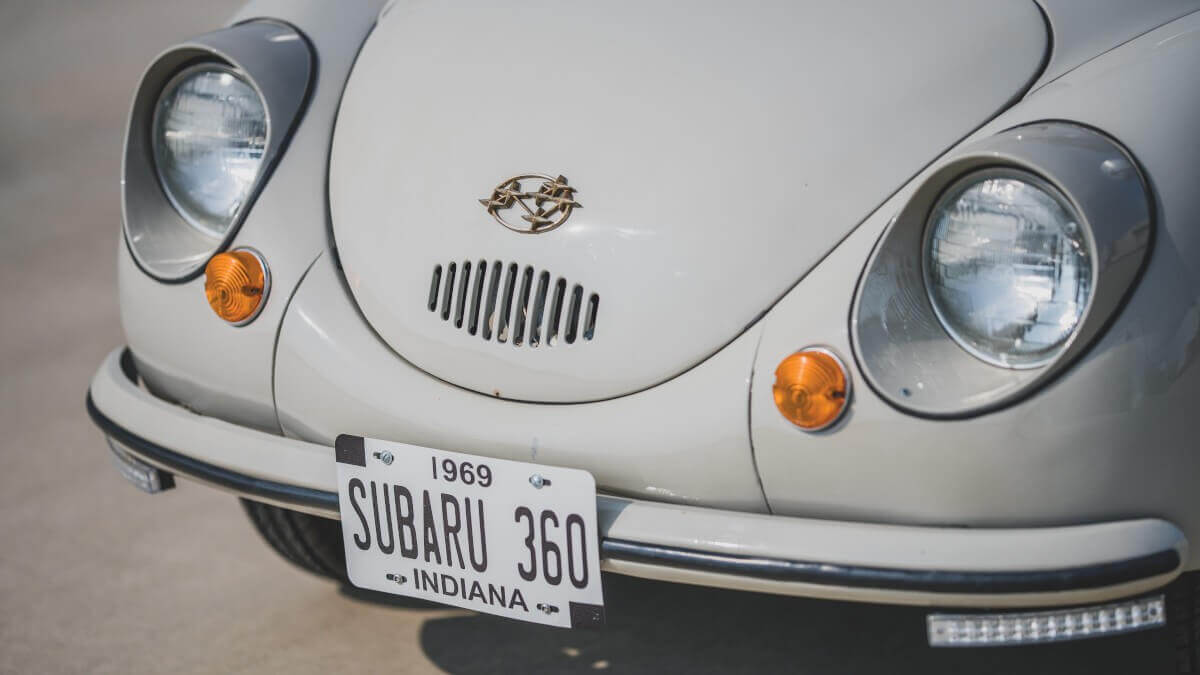 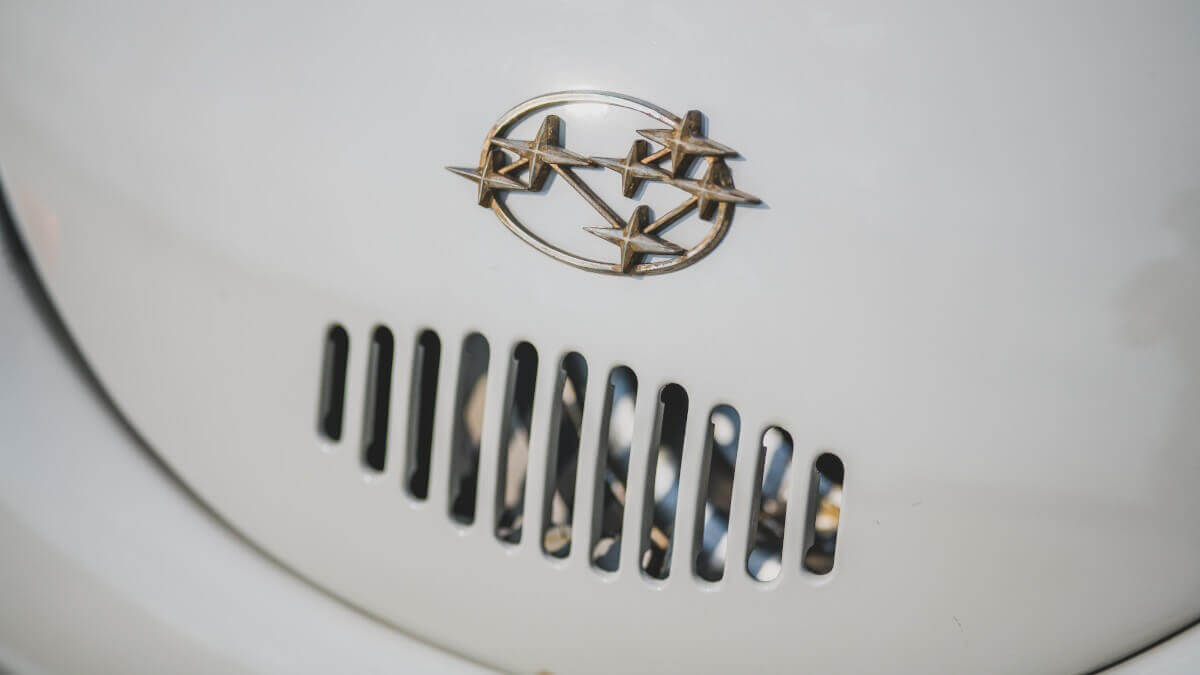 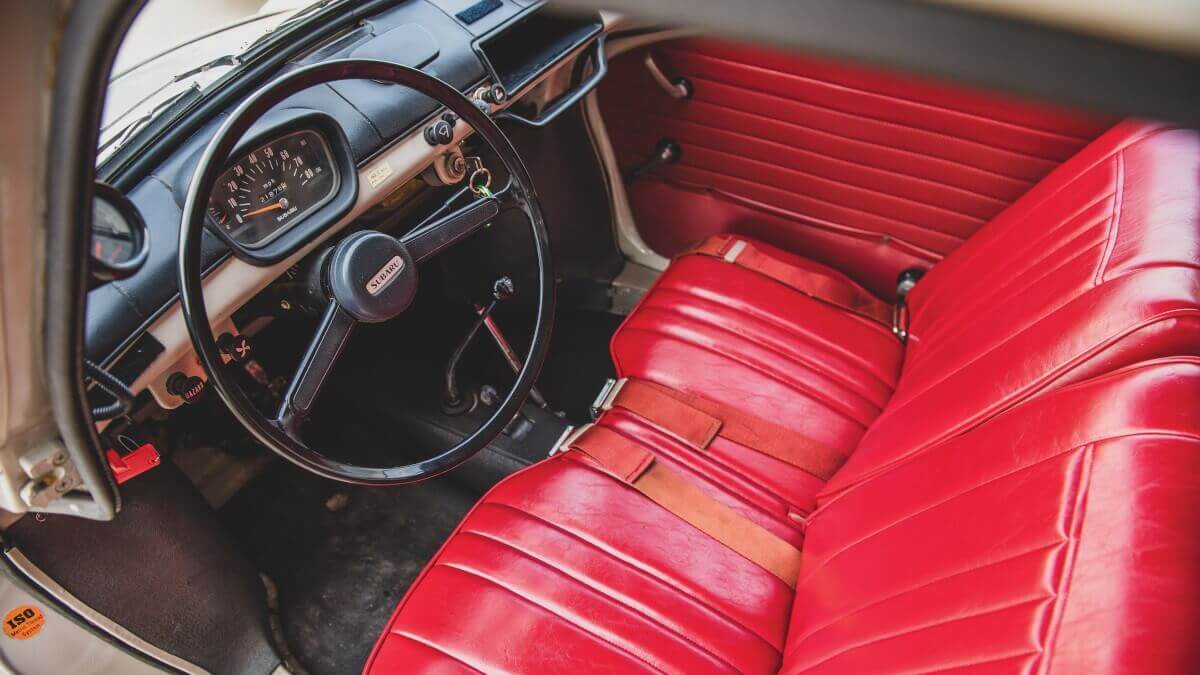 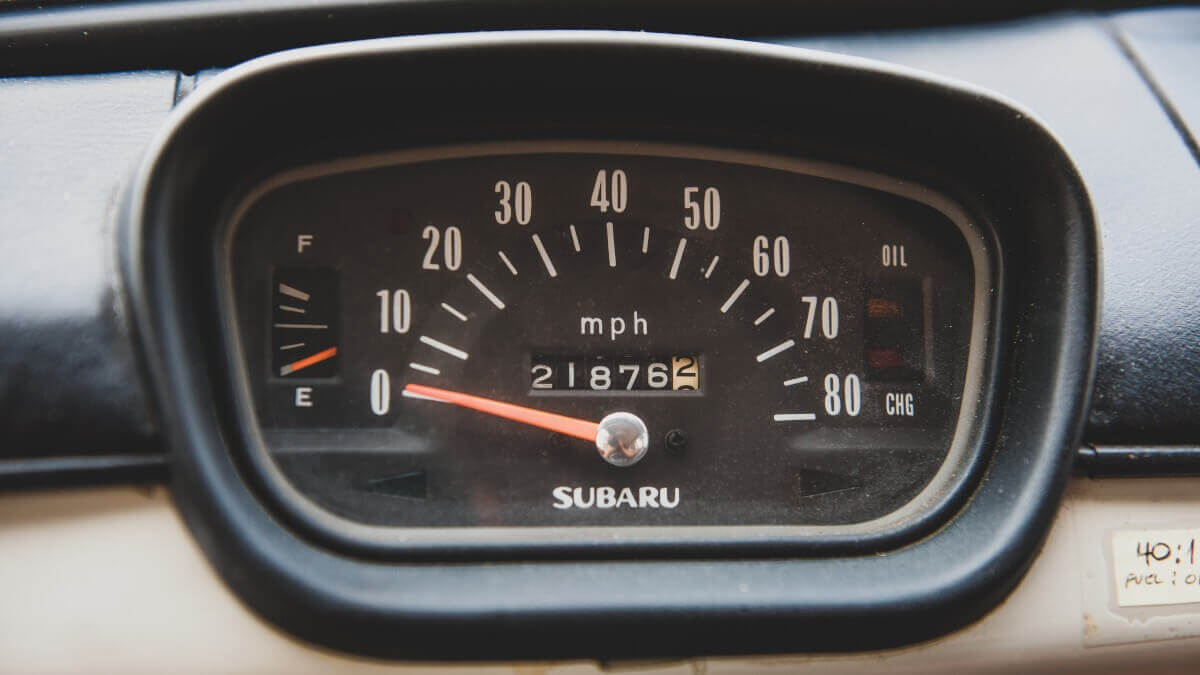 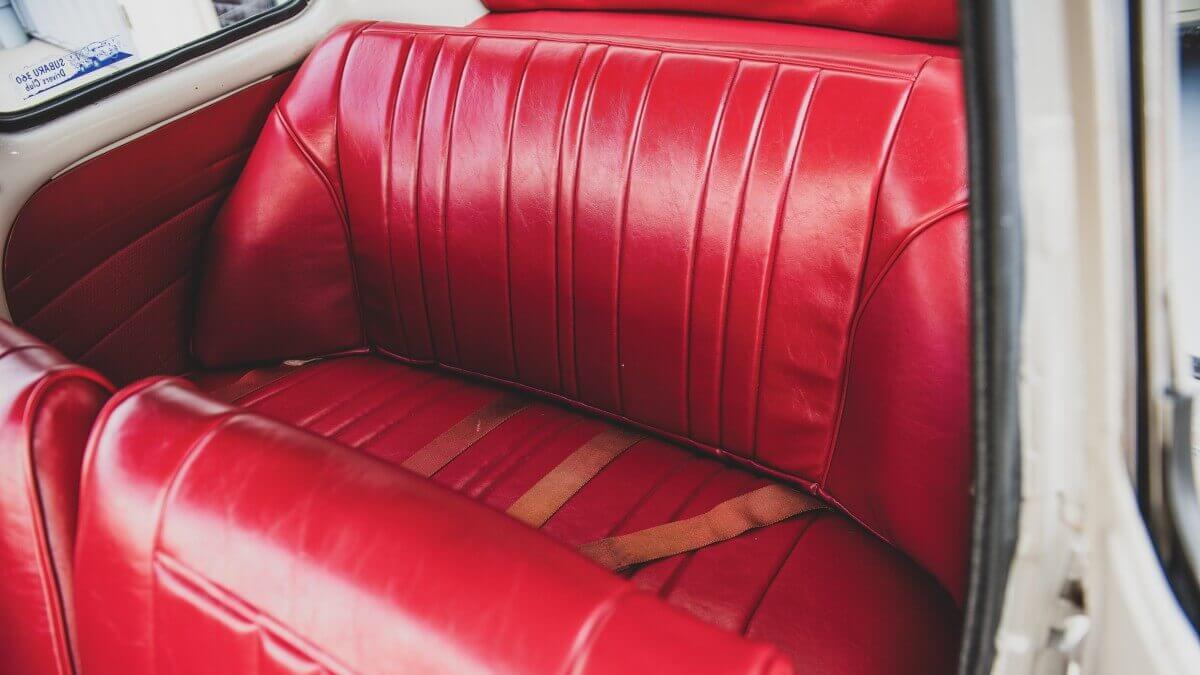 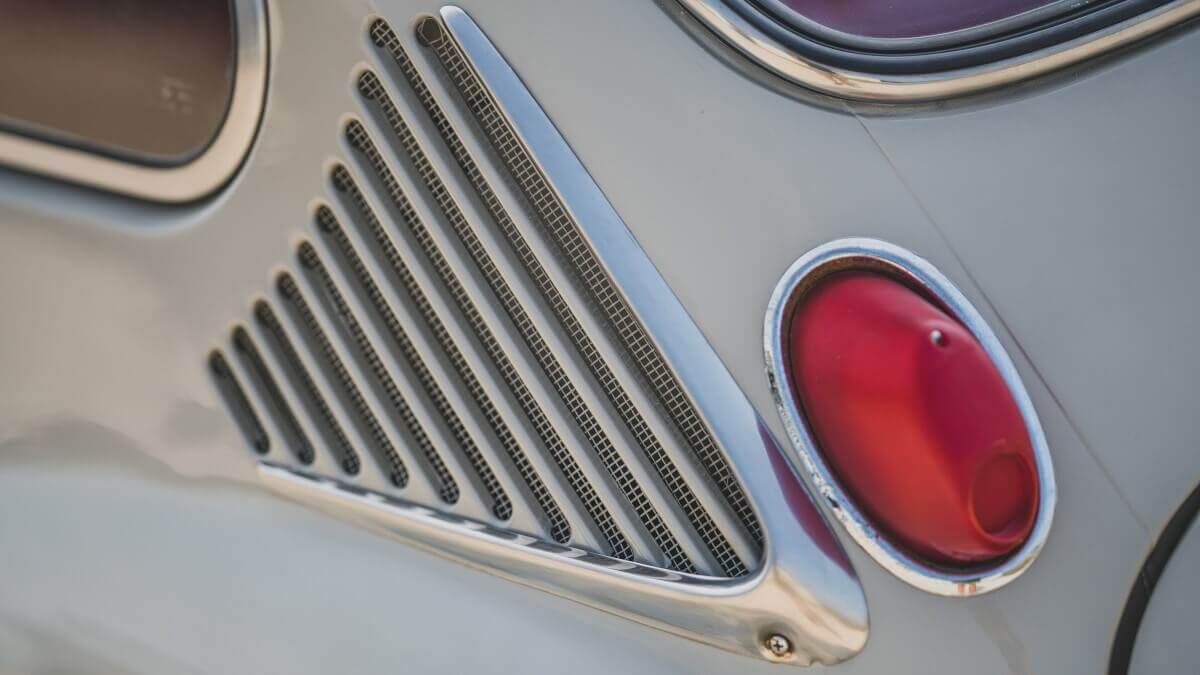 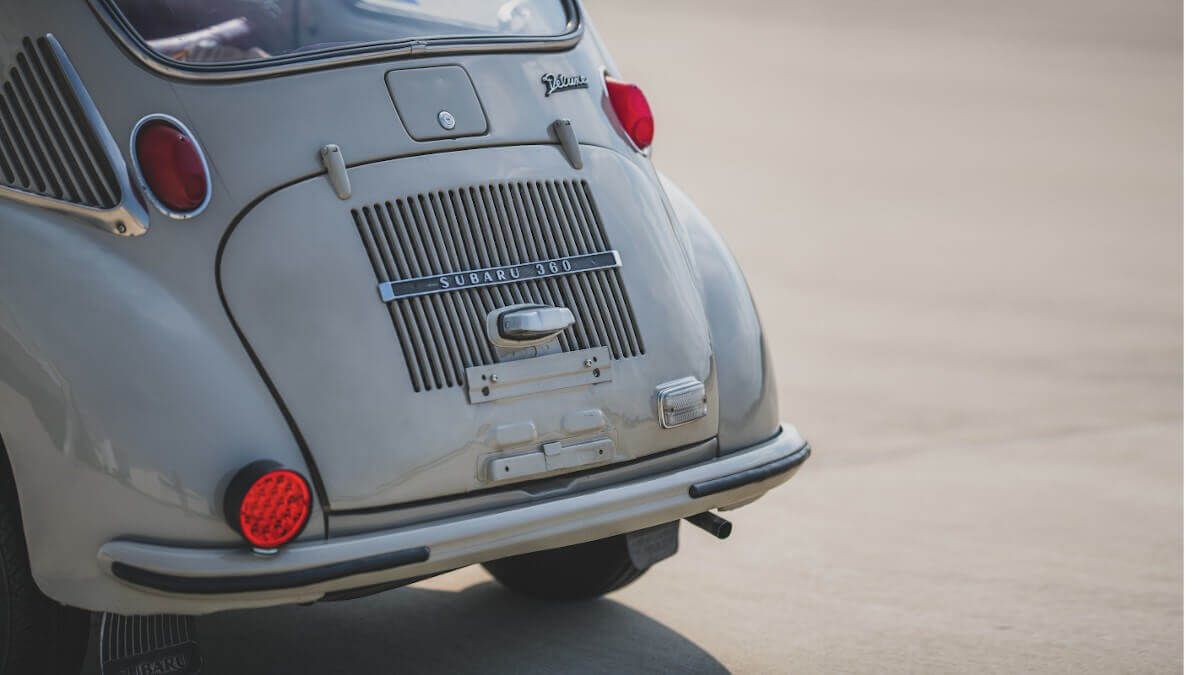 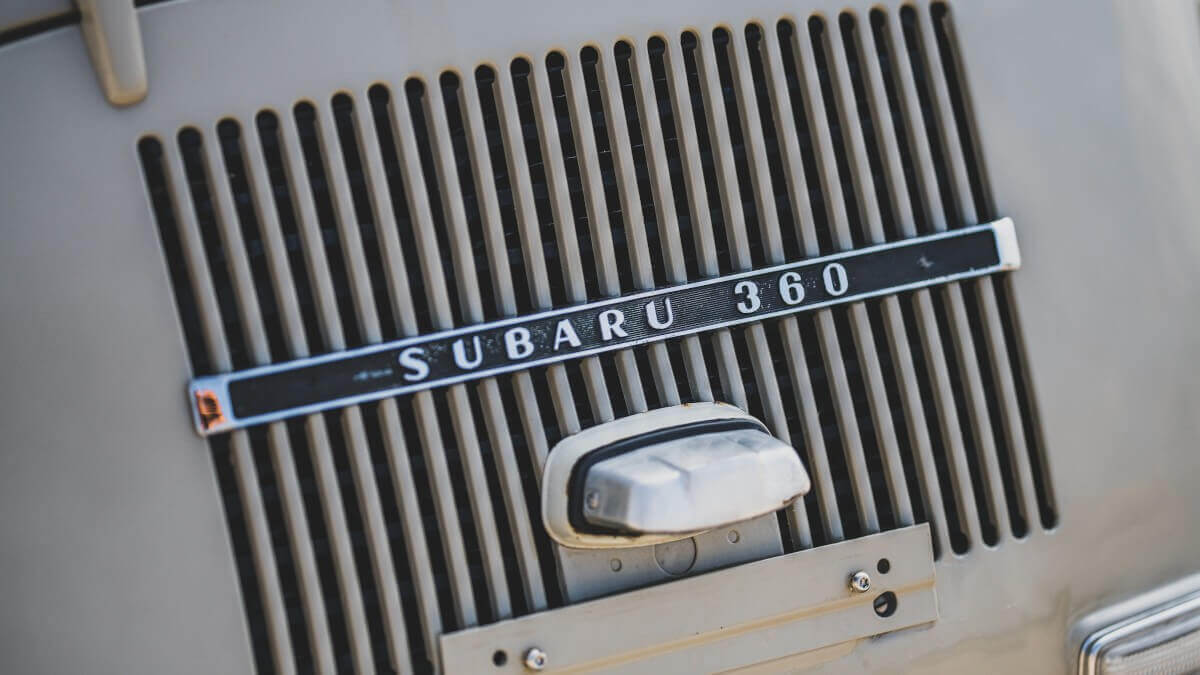 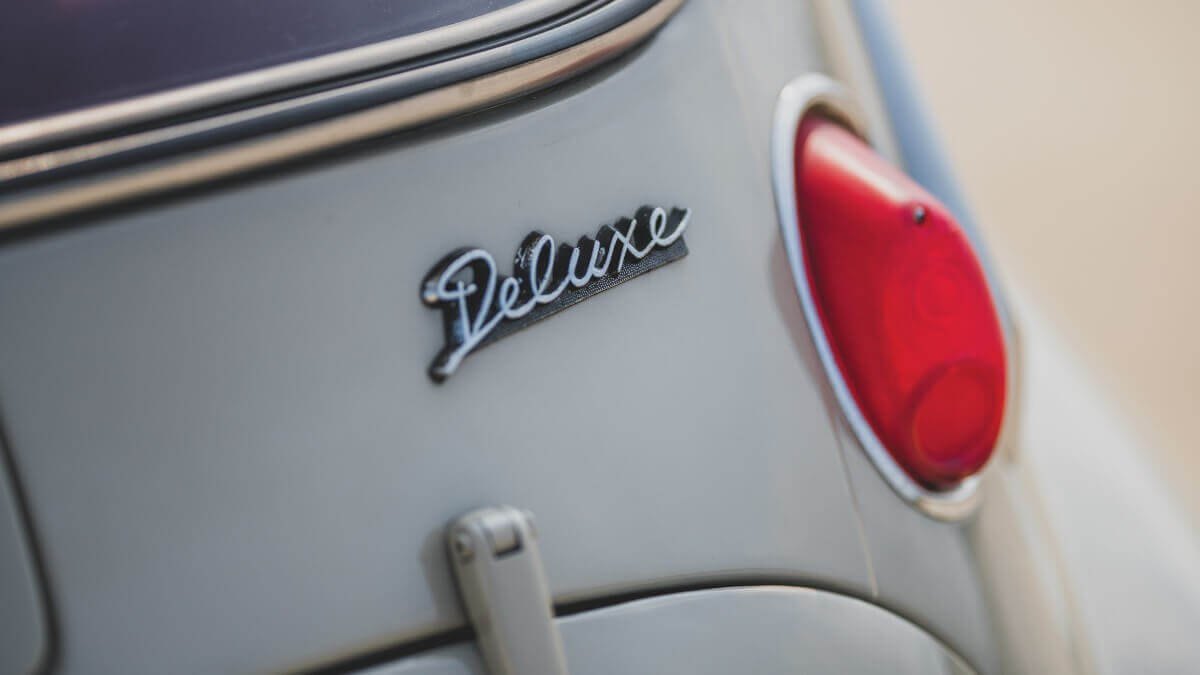 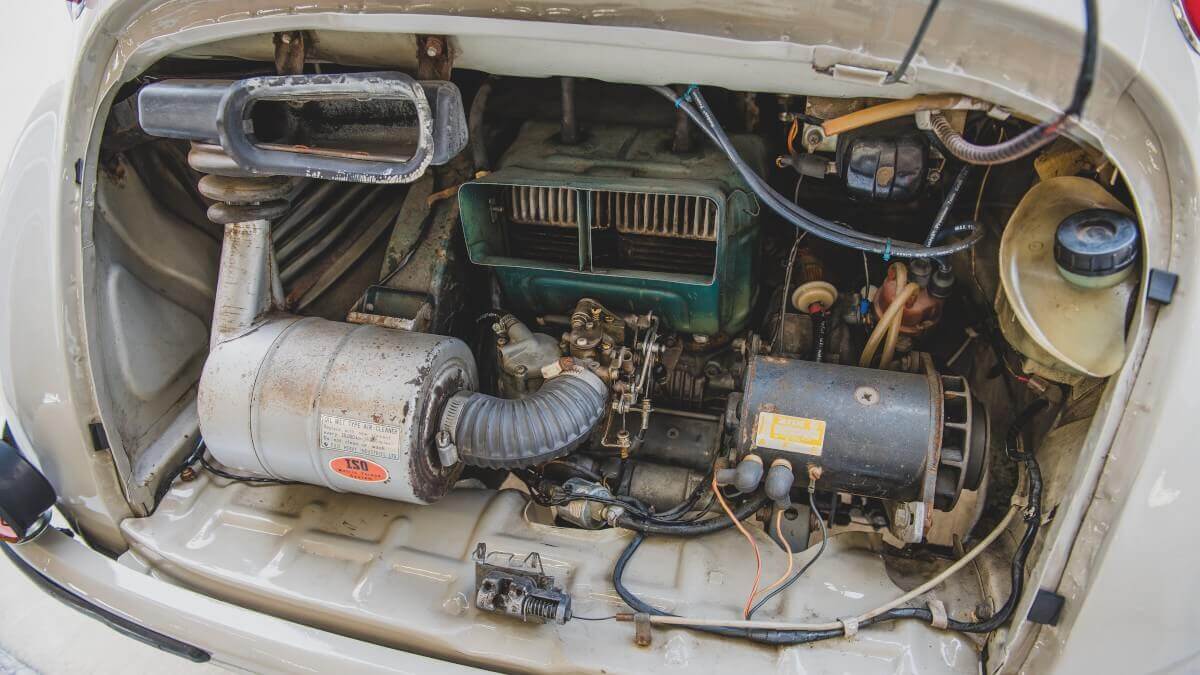 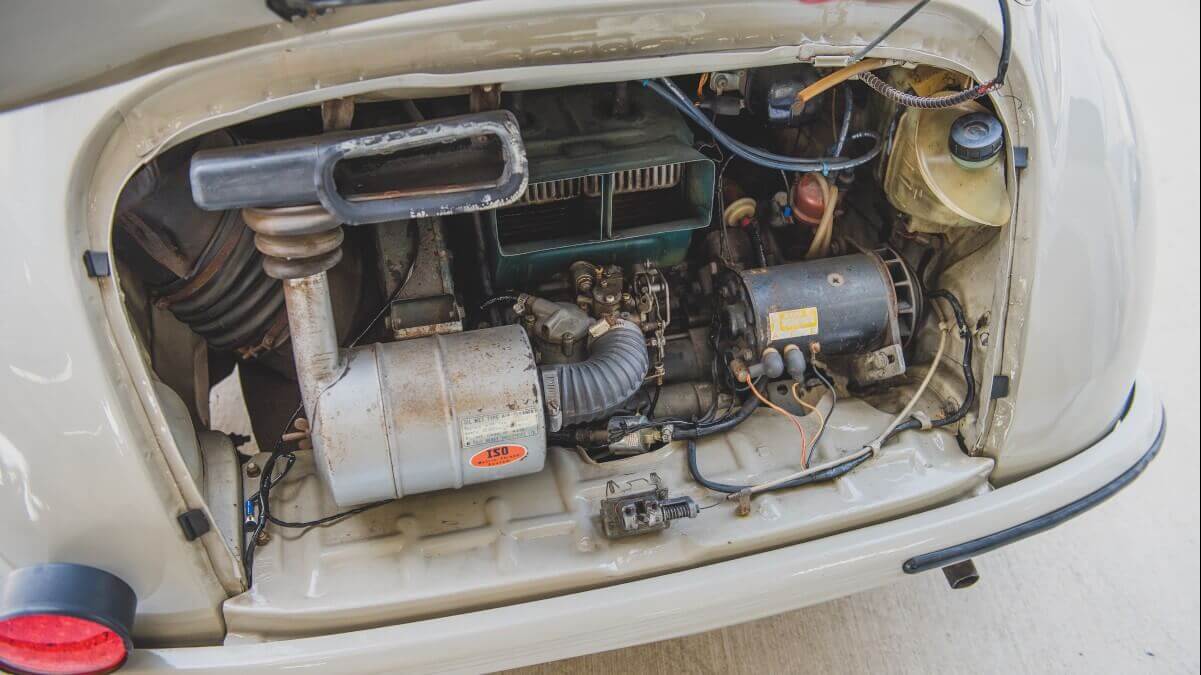 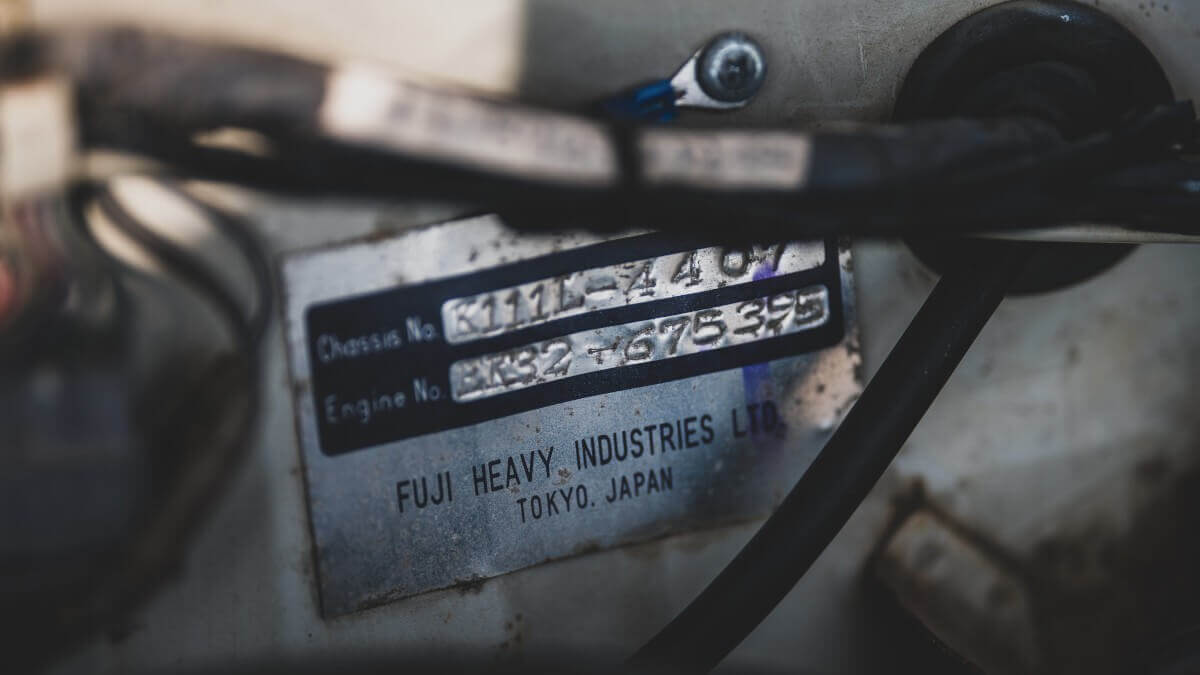 In the rear of the Subaru 360 there was an air-cooled two-cylinder two-stroke engine with a capacity of 356 cubic centimeters. This kept the engine capacity just below the 360 cubic centimeters limit valid in Japan until 1975, which applied to so-called Kei Cars with special tax concessions. In the course of production, output rose from 16 to 23 hp in the Subaru 450 with 423 cubic centimeters, which was later offered in parallel. This larger engine enabled the car to reach a topspeed of 90 kph (56 mph). To transmit power to the rear wheels, a three-speed gearbox was initially installed, and from the mid-1960s onwards on request a four-speed transmission, with the fourth gear being designed as an overdrive.

A total of 392,016 units of the Subaru 360 (and 450) were built between 1958 and 1970. The majority of which were destined for the Japanese market. However, some vehicles were also exported to other Southeast Asian countries. Between 1968 and 1970 Malcolm Bricklin tried to gain a foothold in the US market with the 360, but failed. One of these rare left-hand drive vehicles will be auctioned by RM Sotheby’s in October as part of ‘The Elkhart Collection’. It bears the chassis number K111L-4407 and arrived in the USA in 1969. In recent years, the car has been restored with a new paint job in light grey and a red vinyl interior. RM Sotheby’s didn’t yet give any information about the expected hammer price.