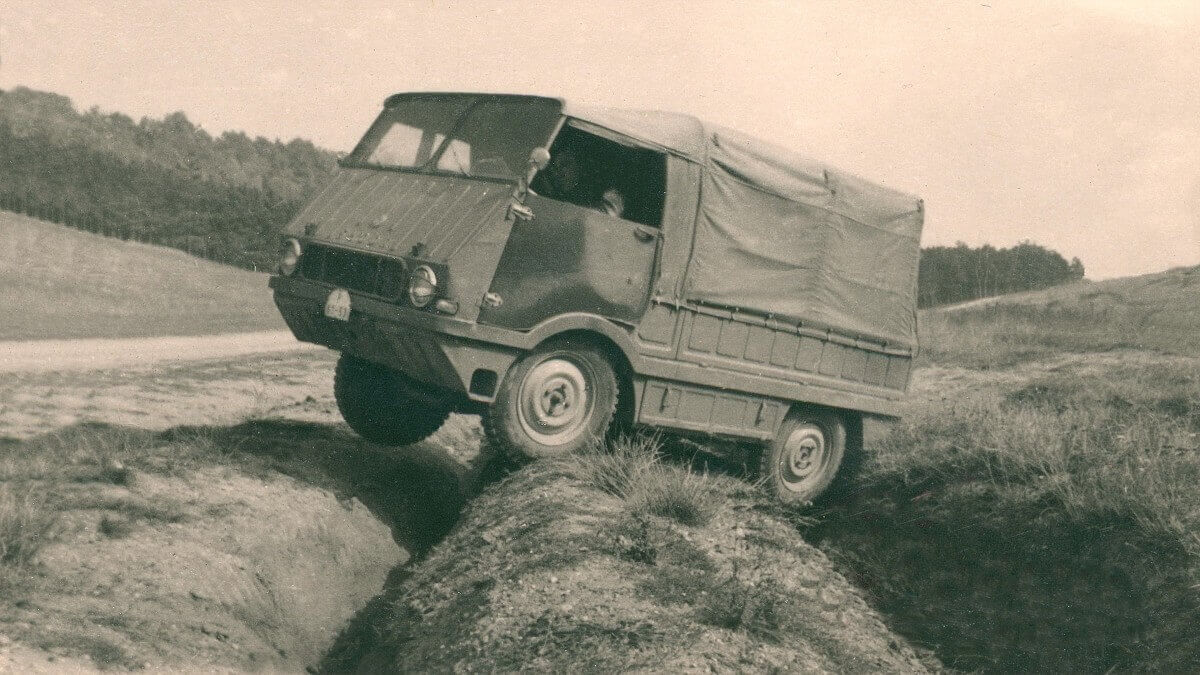 Let’s go back to the year 1962. One year earlier the GDR built the famous Wall between West and East Berlin, thus creating a visually clear reference to the Iron Curtain, the wall between the communist-ruled eastern states and the capitalist West. Inhabitants of the latter region often kept hidden by this clear separation what happened on the other side during the Cold War – except for a few political decisions or sports events. It is therefore not surprising in today’s retrospect that probably only a few of our readers are familiar with the Škoda 998, which was adopted as a prototype in road tests from 1962. When developing and designing the car, Czech engineers had mainly thought of applications in forestry, agriculture and the army, but didn’t exclude other special purposes such as open-cast mining.

The 998 thus seamlessly joined a long series of vehicles that both Škoda and its predecessor company Laurin & Klement had developed for these applications. It all began with the motorcycles from L&K, which could also be used to drive agricultural machinery with just a few hand movements and a leather strap. At the beginning of the 20th century, electric generators were added to the product range, and from 1912, motor ploughs of the type Excelsior P4 with L&K four-cylinder engines were also added. This and later models were also used by the Czech army during World War 1 for earthwork and as tractors for heavy weapons. Meanwhile, the Škoda parent company in Pilsen produced agricultural machinery and tractors with the arrow brand logo, which is still used today. As there was also a lack of compact, agile and versatile off-road vehicles in what was then Czechoslovakia in the late 1950s and early 1960s, Škoda was commissioned by the Ministry of Agriculture to initiate corresponding developments. From January 1961, work was therefore carried out under the code name ‘Agromobil’. Škoda’s official name at this stage was AZNP (Automobilové závody národní podnik, which translates as ‘State Automobile Works’) and they cooperated on this project with the company ‘Česká zbrojovka Strakonice’ (ČZ), which was otherwise better known for its handguns, bicycles and motorcycles. 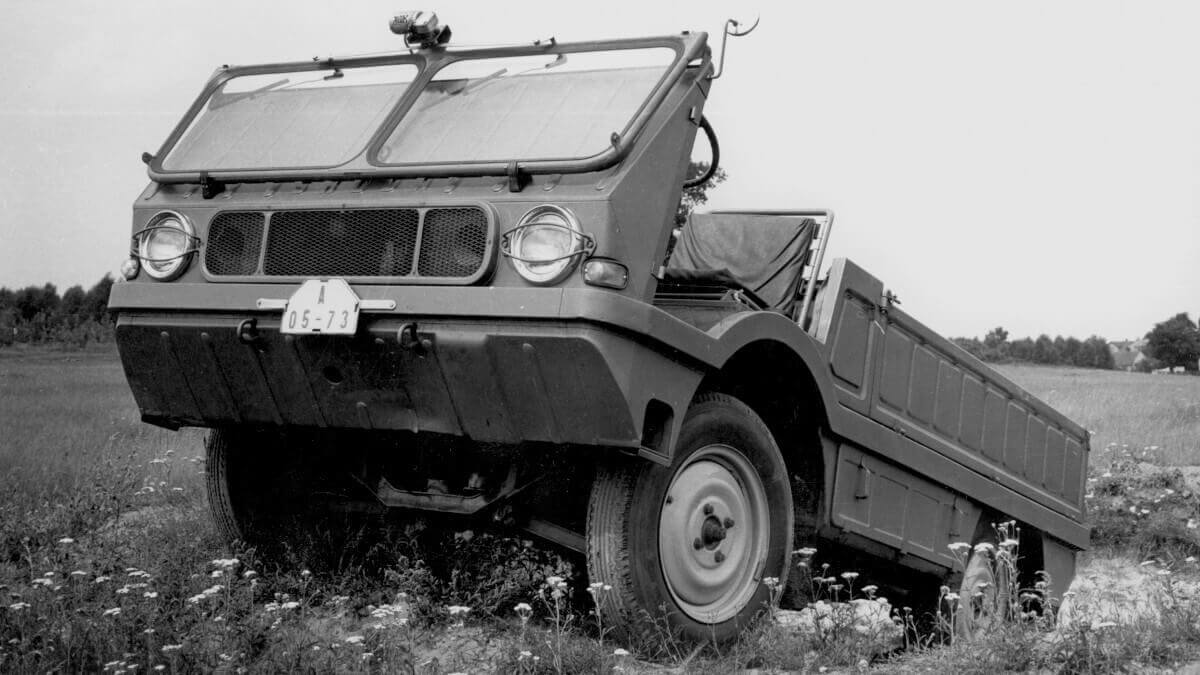 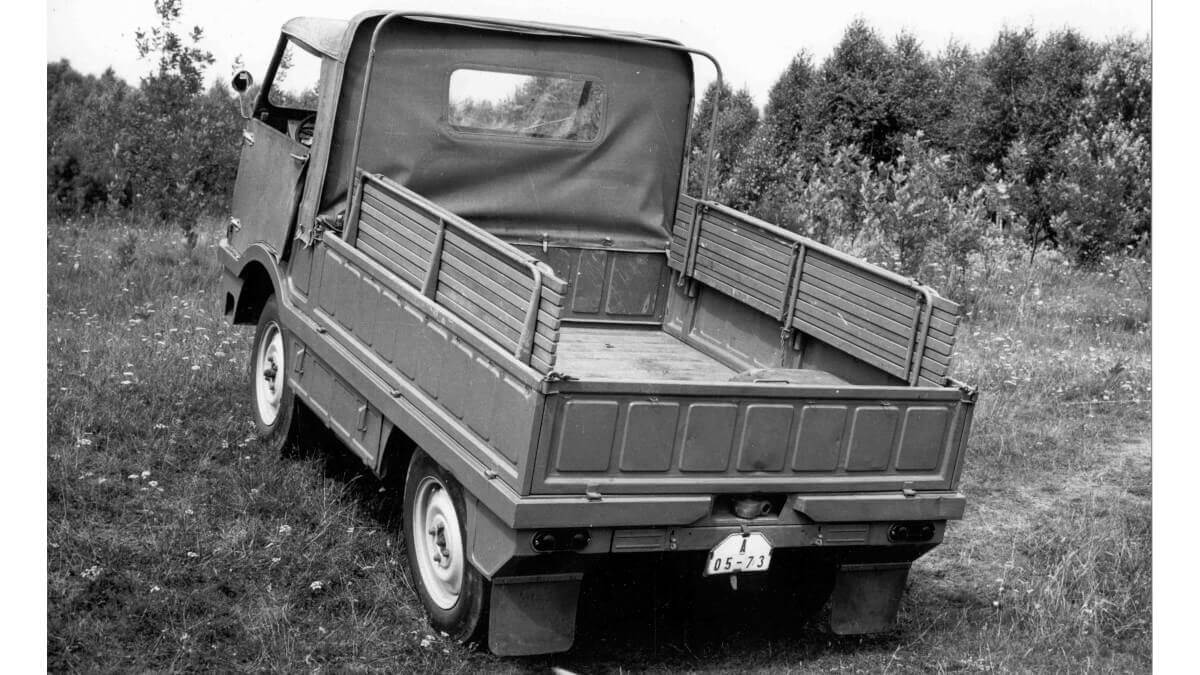 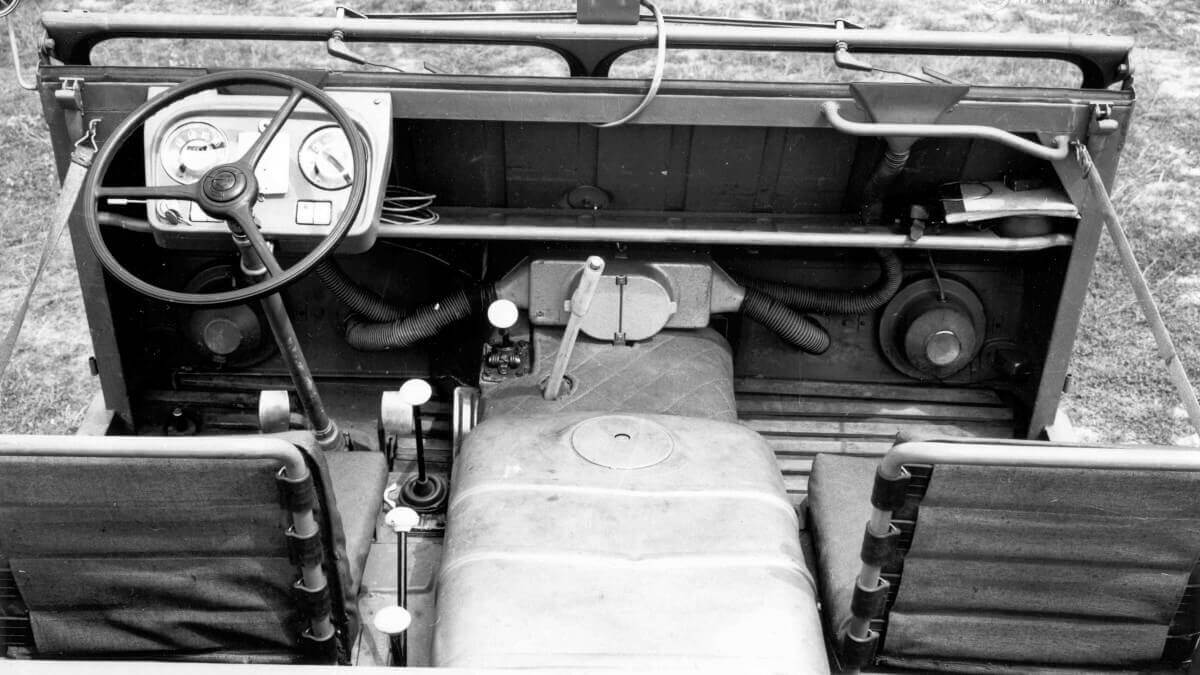 As Škoda’s production capacities were exhausted, the new off-road vehicle was to be manufactured at ČZ. Before that, three prototypes were built in Mladá Boleslav using numerous technical components from Škoda models of the time. Finally, a self-supporting flatbed body with a driver and passenger seat above the front axle stretched over a length of only 3.47 meters and a width of 1.70 meters. Behind it, 3.9 cubic meters of loading space were available. Alternatively, there were versions with two longitudinal benches for up to eight additional passengers. In front of the cockpit, the windscreen could be completely folded down if required, reducing the vehicle height from 1.94 to 1.41 meters. Short body overhangs and a ground clearance of up to 29 centimeters helped the 998 achieve very good off-road capabilities.

Škoda installed the four-cylinder engine from the 1202 longitudinally behind the front axle between the driver’s and passenger seats. The engine delivers 33 kW/45 hp from 1.2 liters of displacement, which was transferred to the rear axle via a four-speed gearbox and made the 998 capable of speeds of up to 89 kph (55 mph). If required, the front axle could be engaged. Limited-slip differentials at both the front and rear provided more traction. A power take-off shaft at the rear could be used to drive agricultural equipment. Škoda specified a kerb weight of 936 kilograms and a payload of 800 kilograms. Of the first three vehicles, two were used for the preparation of the planned production at ČZ, while the third was subjected to tough driving tests at Škoda. They covered 29,953 kilometers in just 79 days, most of them off-road. Another ten units of the 998 were built for the military test center of Czechoslovakia in order to carry out important comparative tests with rival products. The car surpassed both the Soviet GAZ 69 and the other candidates. Nevertheless, the centrally planned economy controlled by the Soviet Union and the limited influence of the Czechoslovak army ensured that the Škoda 998 ‘Agromobil’ never went into series production. In January 1965, the musical ‘Kdyby tisíc klarinetů’ (‘If only a thousand clarinets’), an anti-war film, made the car better known. In one scene, a military command with two copies of the 998 pursues a pacifist deserter. One of the three original prototypes belongs to the Škoda Muzeum in Mladá Boleslav.