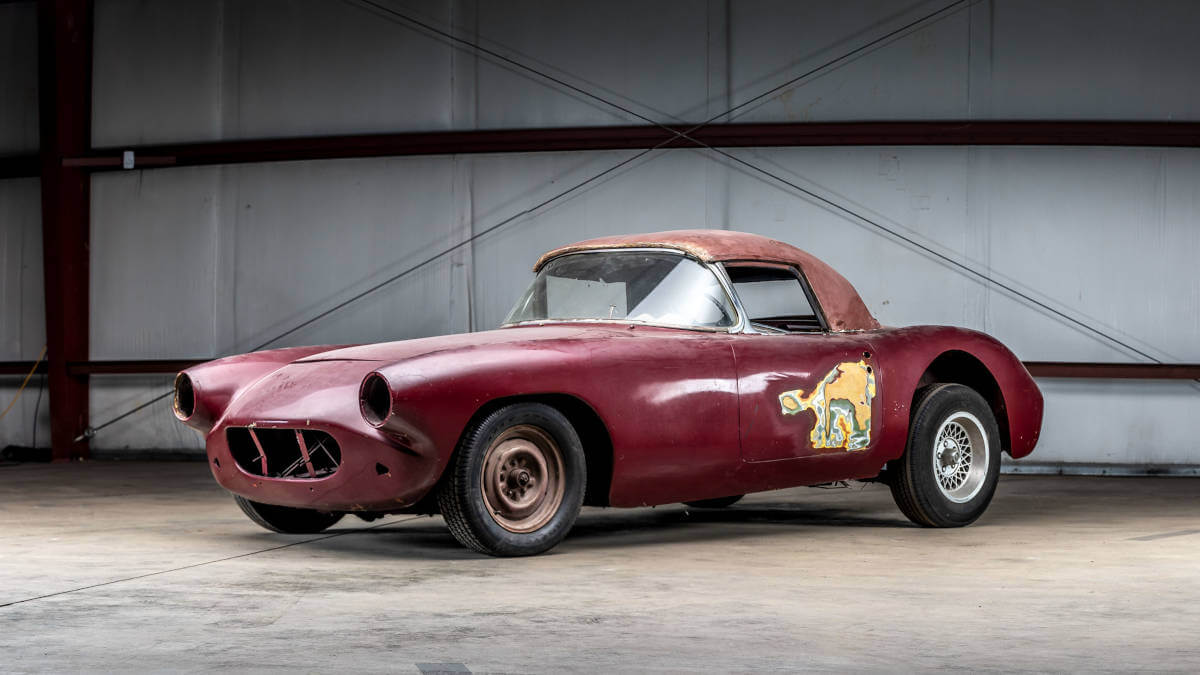 Classic American cars can be very valuable in individual cases. However, it may come as a surprise that the dark red remains of a Chevrolet Corvette in our picture gallery are seriously expected to command a hammer price of between US$ 900,000 and US$ 1,300,000. Of course, the first-generation Corvette model is now rare. In good condition, six-figure prices are also quite conceivable. But seven digits before the decimal point for wreck? Where is the hidden camera? In fact, this value has its justification, which, however, only becomes clear with a look into history.

Early history of the Chevrolet Corvette

When the Corvette C1 was launched in 1953, it was a beautiful convertible. Under the hood was a 3.8-liter inline six-cylinder engine with 110 kW/150 hp. In the following year, a modified camshaft provided a small increase in power to 114 kW/155 hp. With a topspeed that was 112 mph at best, Chevrolet thus didn’t break into the sports car market. It wasn’t until 1955 that a small-block V8 with 143 kW/195 hp from 4.3 liters of displacement moved into the two-seater. This meant that the topspeed was now over 124 mph. One year later, power increased to 157 kW/213 hp, with optional performance kits available with 228 or 243 hp. Now motorsport enthusiasts were also increasingly interested in this vehicle. In 1957, Chevrolet replaced the V8 with a new powerplant with 4.6 liters of displacement and 208 kW/283 hp. For the 1958 model year, variants between 169 kW/230 hp and 213 kW/290 hp were available. 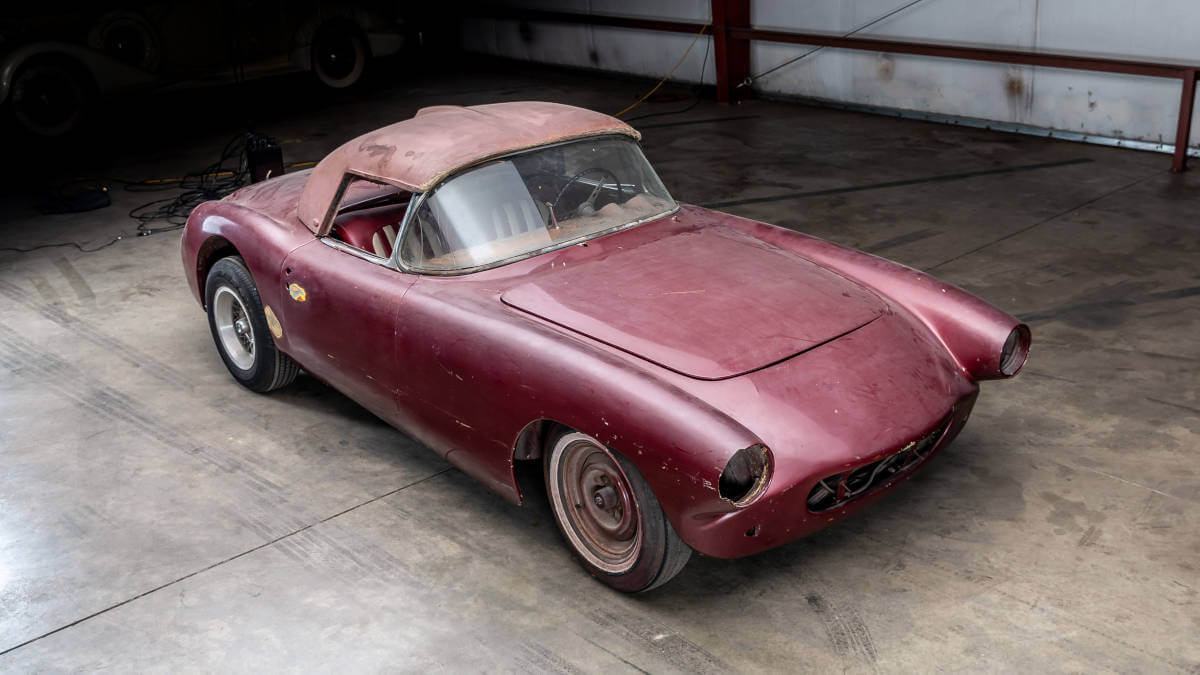 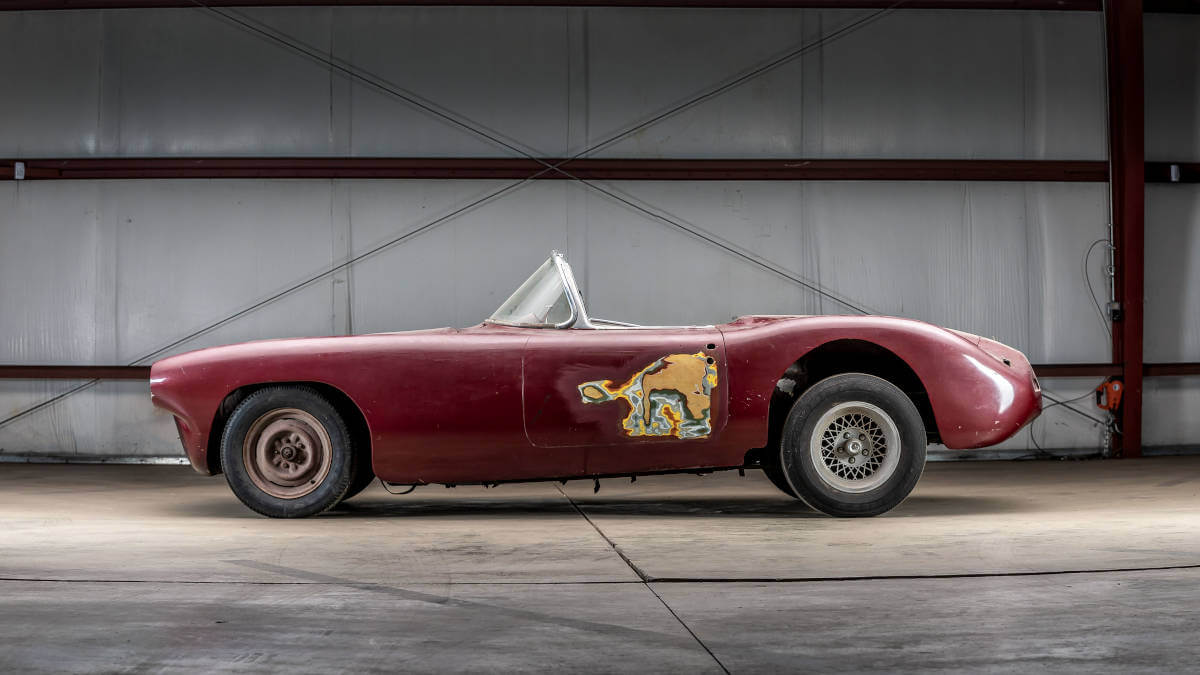 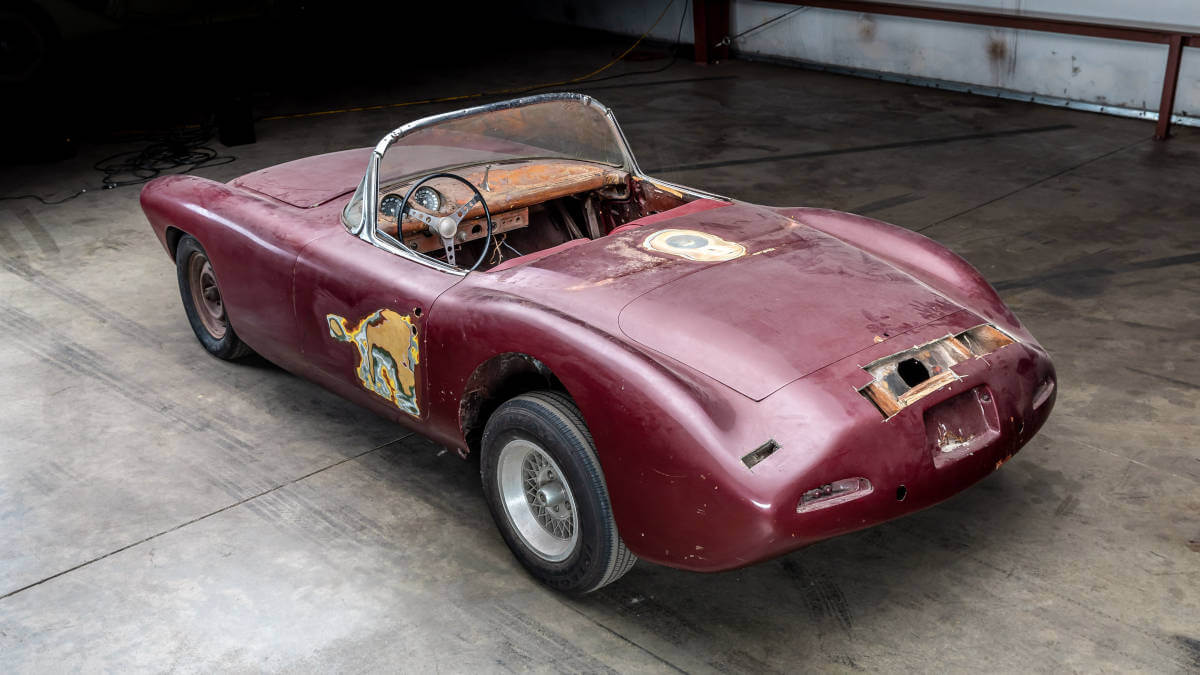 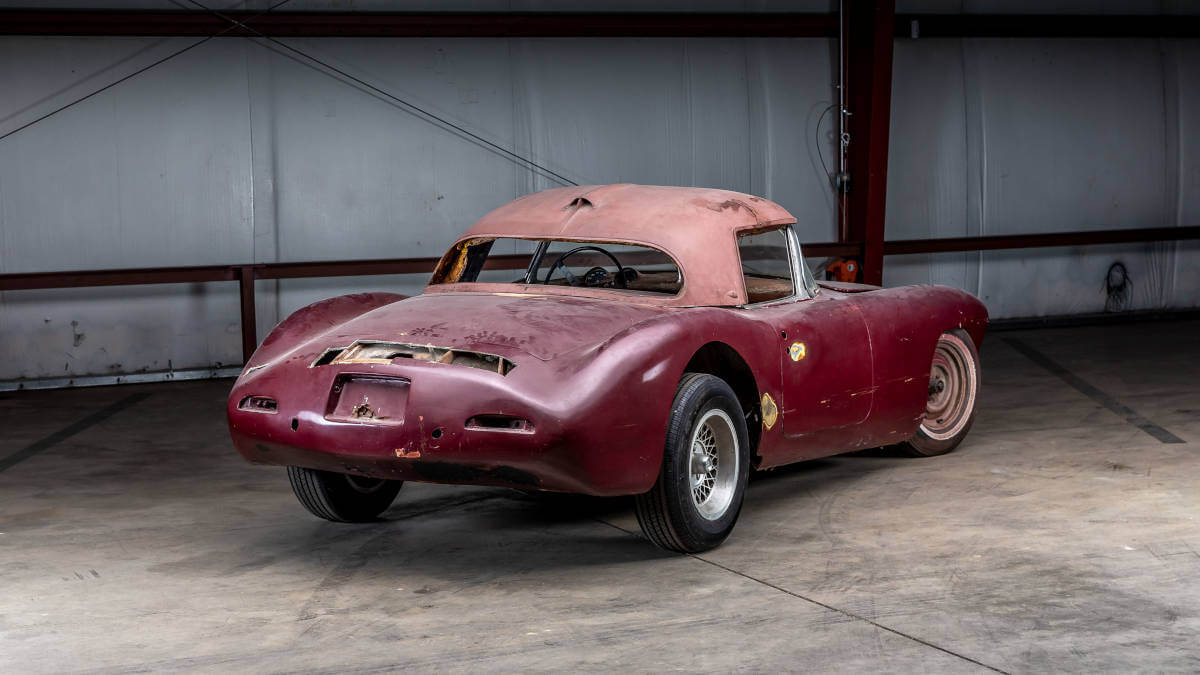 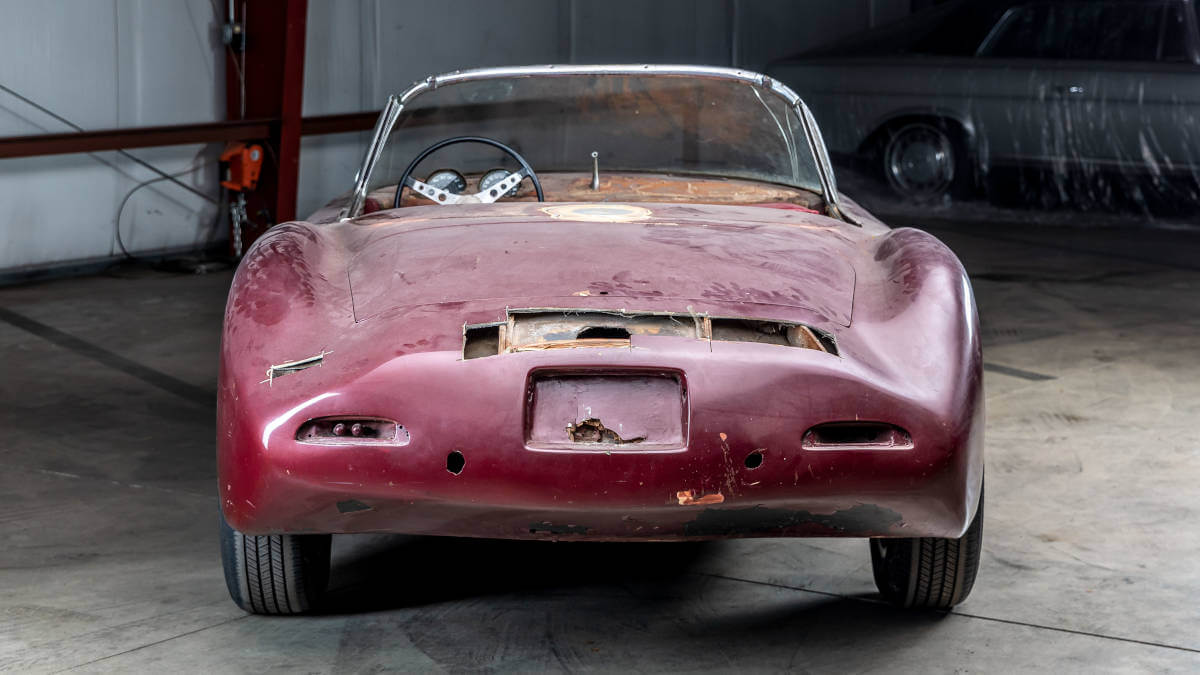 To the same extent as the engine range, Chevrolet also repeatedly changed the body of the Corvette C1. While the original version rolled out to customers with single headlights and suggested tail fins, not much of this was left by the end of production in 1962. The tail fins were dropped as early as 1956, and at the same time the plastic body was given side indetations, which were painted in a contrasting color at extra cost. In addition, there were now door handles on the outside and a hardtop ex works, while at the front the previously flush headlights now stood upright in the wind. From 1958 onwards there were twin headlights at the front, which visually concealed the widened and lengthened bodywork. There were also new air outlets behind the front wheels. In the following two model years, more and more chrom trim was removed. In 1961 a last facelift took place with boat tail and omission of the lateral indentations.

What is the history of the wreck?

This finally brings us back to the dark red vehicle in barn find condition. In the fall of 1959, the spritual father behind the Corvette, Zora Arkus-Duntov, contacted the American private racer Briggs Swift Cunningham II, heir to the Procter and Gamble corporation. The latter had just abandoned his plans to win the 24 Hours of Le Mans after a decade of futile attempts. In 1950, he had entered two Cadillacs he had specially built for the race. From 1951 to 1955, more home-built cars followed from his workshop in West Palm Beach, Florida. His greatest ambition was to win with and all-American team. While he was denied that victory, he did manage to win the America’s Cup in sailing in 1958. Arkus-Duntov was able to offer him an exclusive endurance racing car based on the Corvette, which had been created at GM. 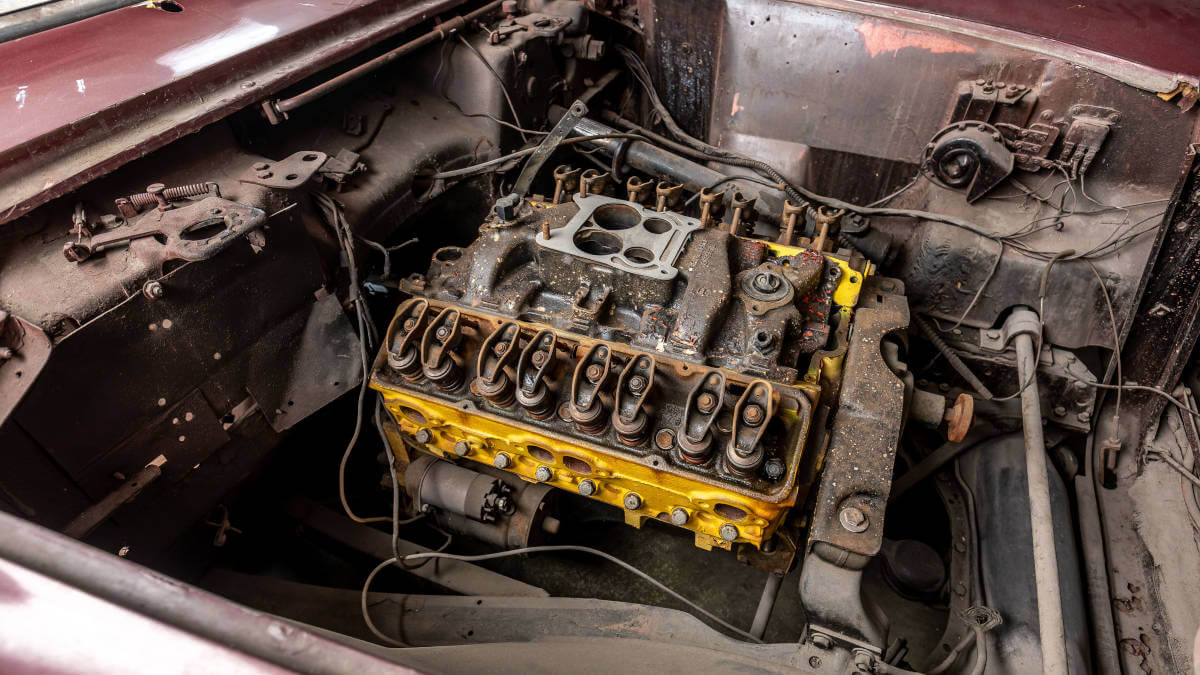 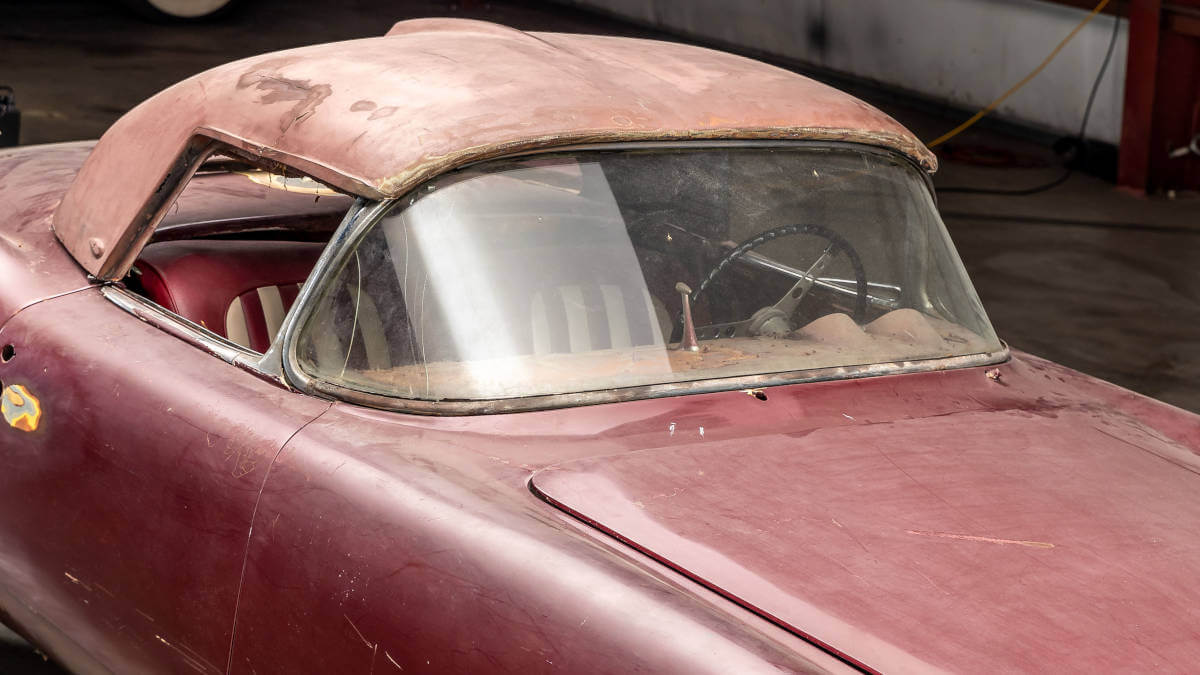 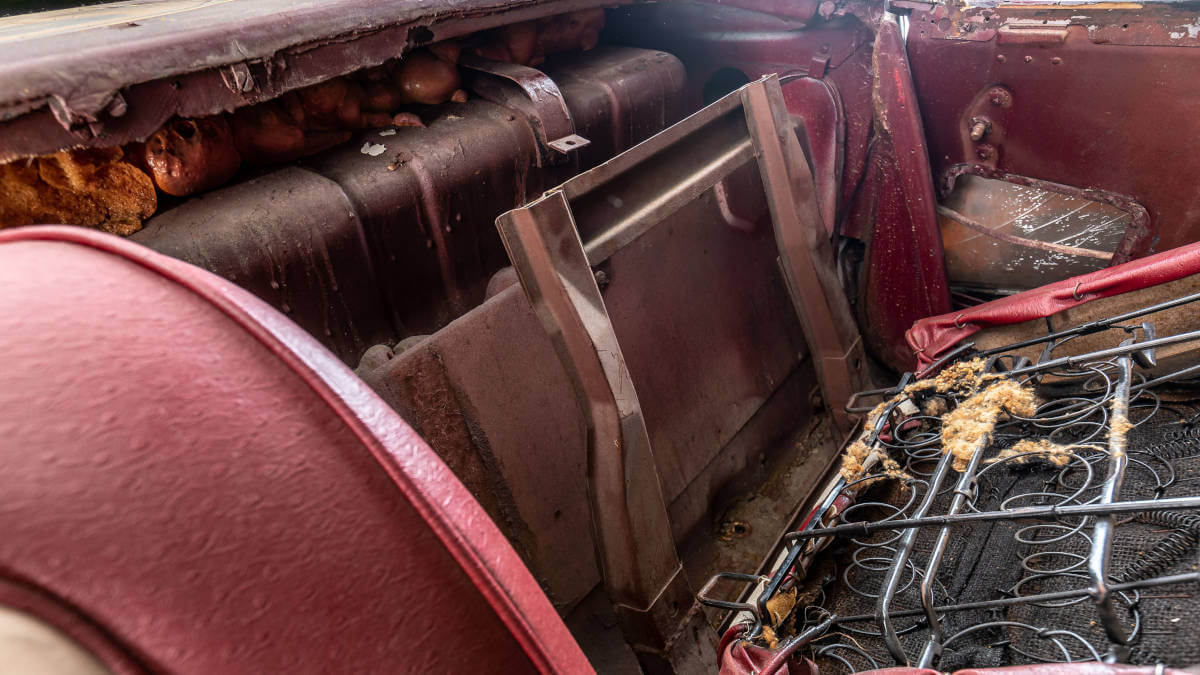 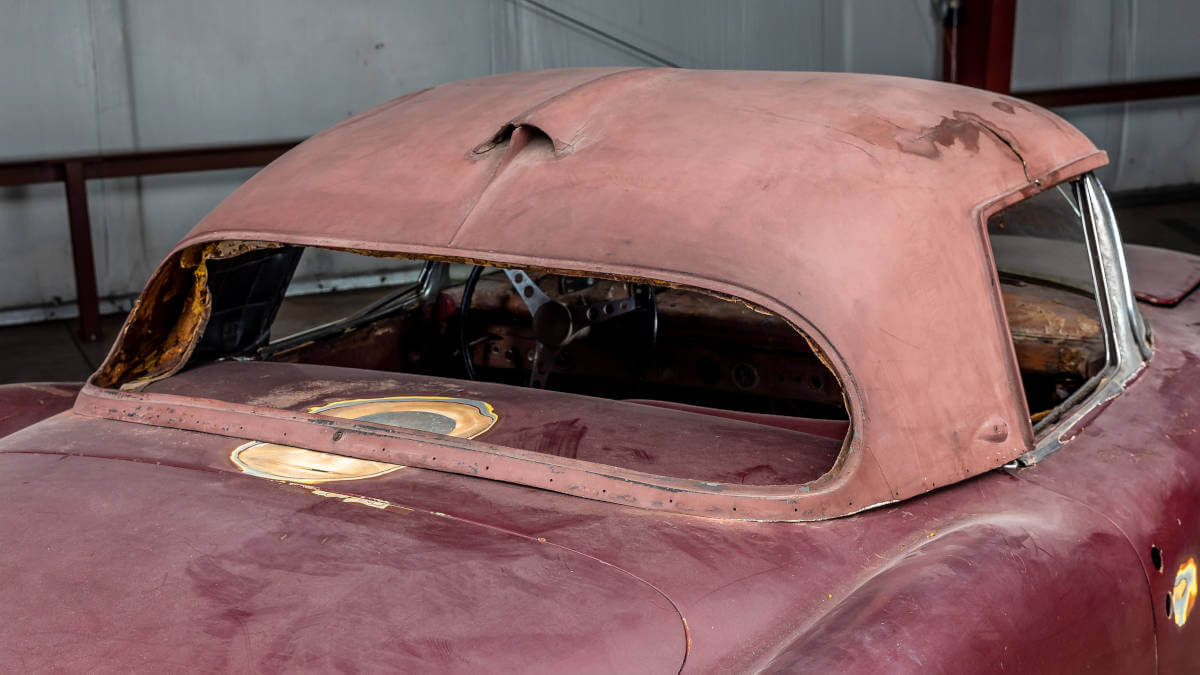 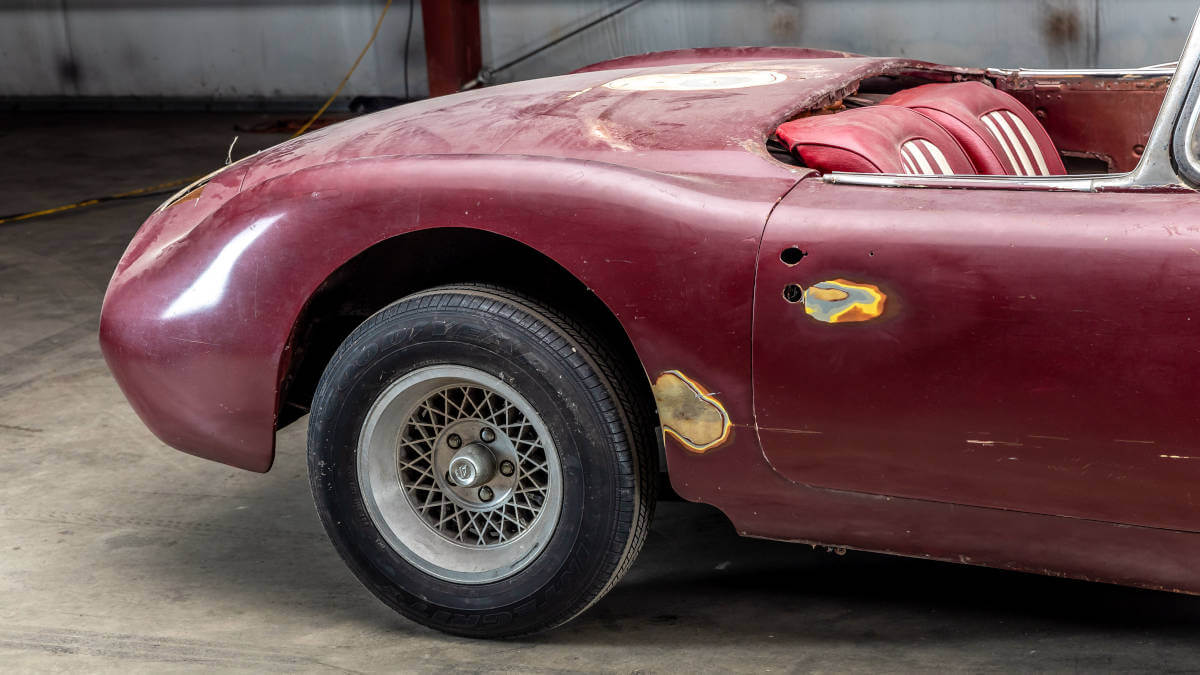 Racing activities through the back door

And this despite the ban on all factory racing activities imposed on all American automakers after the fatal Le Mans accident in 1955. From 1958, some brands dared to move forward again, but only unofficially through partnerships with private teams. On January 7, 1960, Chevrolet reached agreement with Cunningham on the entry of three cars. These were completed on March 16. To keep Chevrolet’s involvement under wraps, all cars officially were delivered to dealer Don Allen Midtown Chevrolet in New York City. They then went to Alfred Momo’s shop, where they were prepared for racing with quick-release fuel caps, magnesium wheels with Firestone racing tires, auxiliary instruments and Koni shocks. The tailpipes ended at the side under the doors. After subsequent test drives, further modifications were made.

As early as March 26, two cars took part in the 12 Hours of Sebring. While number 1 crashed after damage to the rear wheel hub, the second car dropped out with engine failure. After the necessary repairs, all three cars went to Le Mans by ship. There they were given the starting numbers 1 (chassis# 3535), 2 (chassis# 4117) and 3 (chassis# 2538). Originally, Zora Arkus-Duntov was to sit at the of #1 together with Briggs Cunningham. After the practice runs, he withdrew due to concerns from the GM boardroom. In the field of otherwise only European sports cars and GTs up to five liters, the Corvette initially was well placed. When it started raining around 6:00 pm, they changed tires and drivers. However, at the end of the first lap after the pit stop, Bill Kimberly crashed #1 due to aquaplaning. 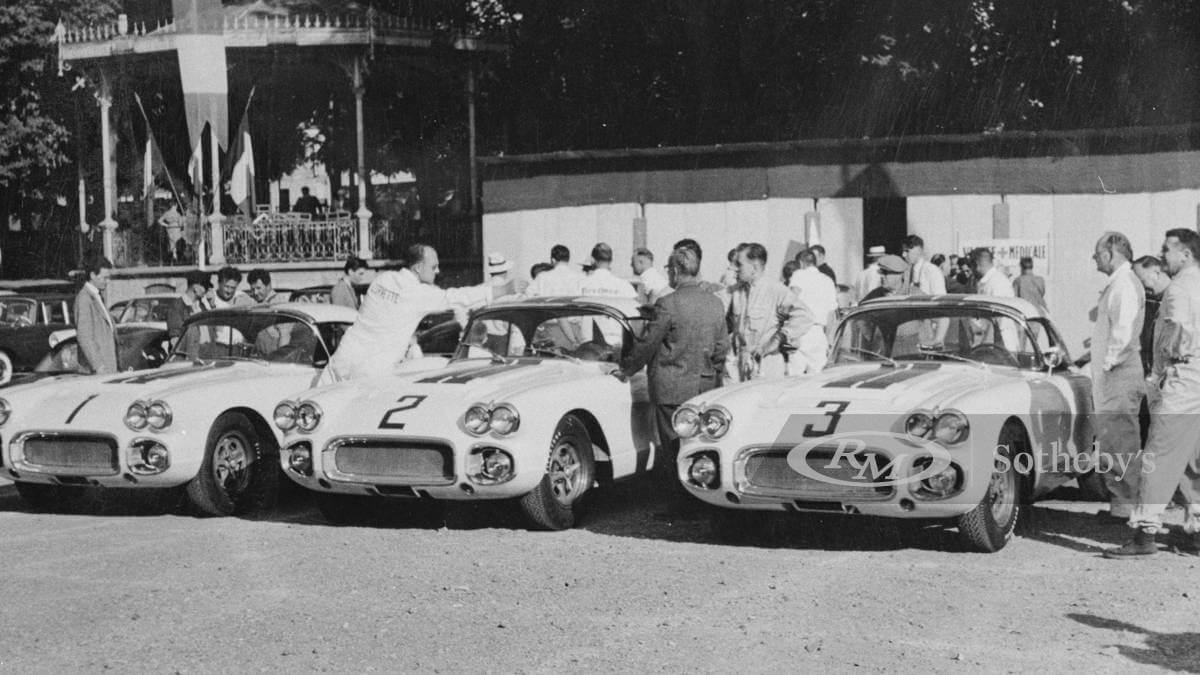 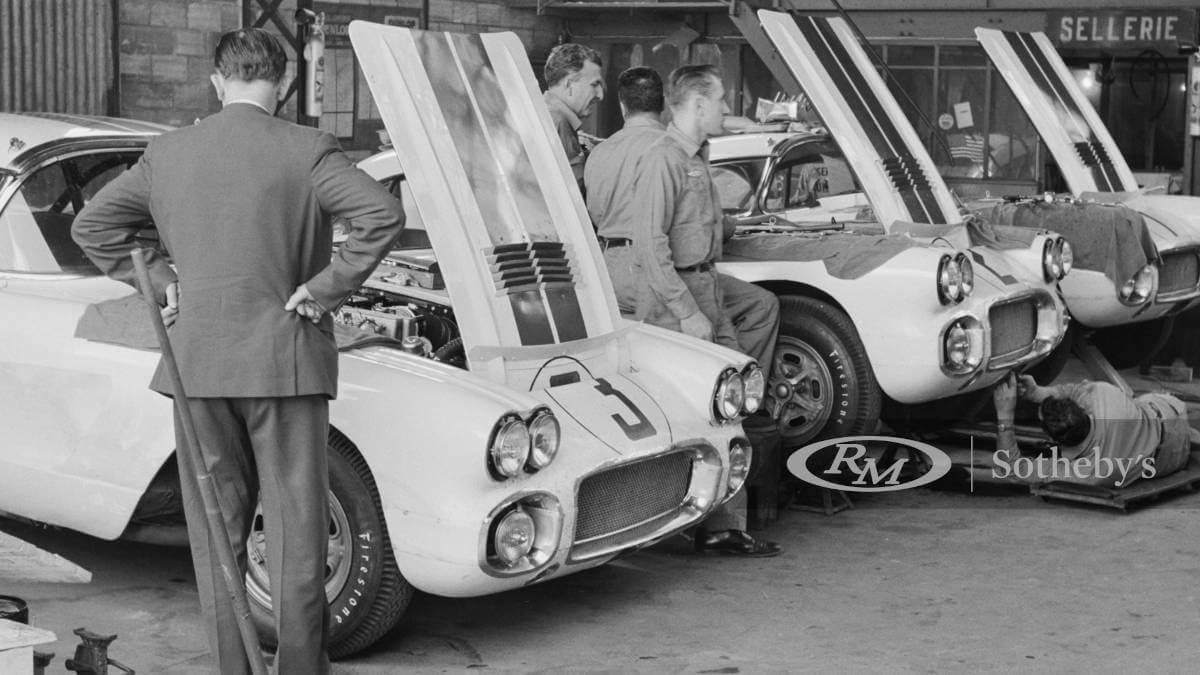 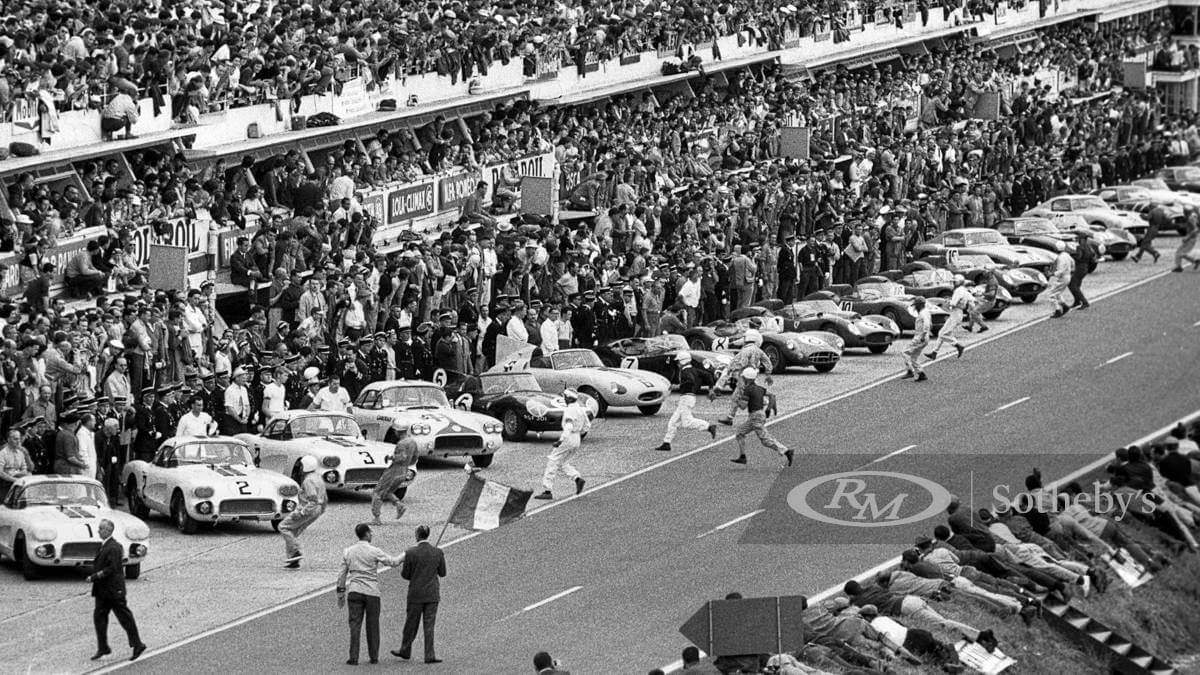 Race cars were sold in the US

Car #2 crashed in the same place a little later, but was able to limb back to the pits. After the necessary bodywork repairs, the car retired with engine damage. Only car #3 with the driver pairing Bob Grossman/John Fitch finally reached the finish line in eighth place overall. More important, however, was the win the GT class up to five liters displacement. All three cars then went back to Momo in the USA. The engines were removed and returned to Frank Burrell at GM as per contract. Cunningham then sold the empty cars to fellow private racers. Chassis# 3535 went to Marshall ‘Perry’ Boswell Jr. He rebuilt the engine-less Corvette to the pre-1958 front end with single headlights and incorporated a stand-alone grille. He also modified the hood with a central air intake. Then he smoothed out the side sections and painted the car black with chrome wheels and whitewall tires. Sometime around 1966, Mr. Boswell sold the Corvette.

Various owners in Florida followed, one of whom painted the car green, another in yellow. The last known change of ownership led to Dan Mathis’ garage in 1974. For the next 37 years, the Corvette disappeared from public view. In 2011, an online listing surfaced for a red “pre-production Zagato prototype with Pontiac parts”. It came from Rick Carr, who was clening out and selling the estate of his late father, Richard W. Carr. Among the items in the warehouse was the converted Corvette, which Rick Carr initially couldn’t identify. It wasn’t until he looked up the chassis number that he came across the background story. Despite the conversions, various original parts such as the wiring harness for the illuminated numbers on the doors, the racing tank and the motorsports drum brakes have been retained. The former cars #2 and #3 have already been restored. RM Sotheby’s is now looking for a new owner for #1.