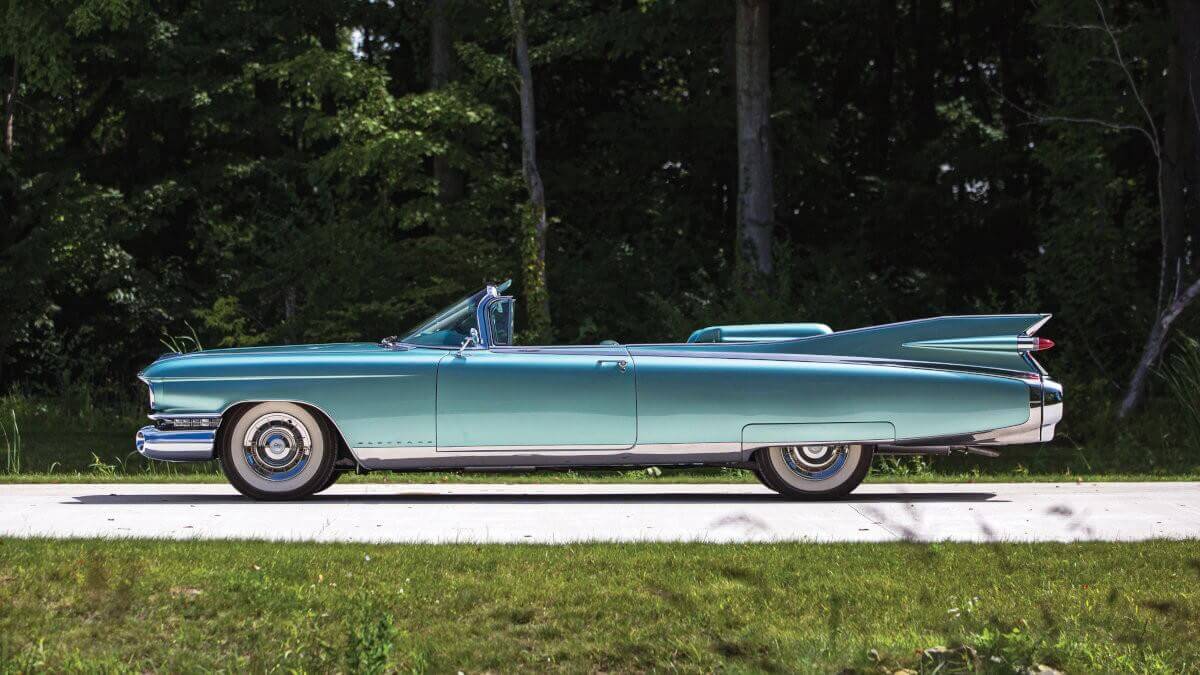 The age of the American land yachts or road cruisers is symbolized by hardly any other car as much as by the 1959 Cadillac Eldorado Biarritz. It was a time of abundance, which was also shaped by the emerging space program of the USA. The chrome trim and tail fins on the cars grew to an undreamed-of extent. The US manufacturers helped a great deal in this game, with facelifts or even a new model every year. Cadillac had first introduced the Eldorado in 1953 as the most luxurious version of the Series 62. In the following year, the second generation of models rolled out to the dealerships, which was produced until 1956. In 1957 and 1958 there were generation number three, from which the extremely luxurious and expensive Eldorado Brougham sedan was derived for the first time. With the 1959 Eldorado, the road-cruiser trend was finally given a summit cross. In addition, the model was now regarded as an independent series, although it continued to share the body with the basic model, which was now called Series 6200. As with the previous models, there was the luxurious Eldorado Brougham sedan, the Eldorado Biarritz as a four-seater convertible and the Eldorado Seville as a coupé. In the following year, a trend towards simple design began to emerge, as customers also wanted more down-to-earth cars.

A look at the ‘king of the tail fins’ is still worthwhile, even if you might not really like these huge cars. More sheet-metal, drivable space is only available for commercial vehicles. The wheelbase of 3.3 meters alone is sufficient for the length a modern small car. With the Cadillac, however, that’s just the beginning. The measuring tape stops at 5,715 millimeters. In width it is 2,037 millimeters. Central European standard garages and standard parking spaces are thus not only reaching their limits, they have already been exceeded. However, 11.64 square meters of space are sufficient for many students to live in. In the case of the Cadillac, they conceal four to six seats, depending on whether the continuous benches are fully occupied or not. In front of the windshield, a hood that seems almost endless from the driver’s seat begins, giving access to the 6.4-liter V8 engine. This develops 257 kW/349 hp, which are transferred to the rear wheels via a four-speed Hydra-Matic automatic gearbox. At the rear, between the fins, the designers Harley Earl and William Mitchell integrated a large trunk. 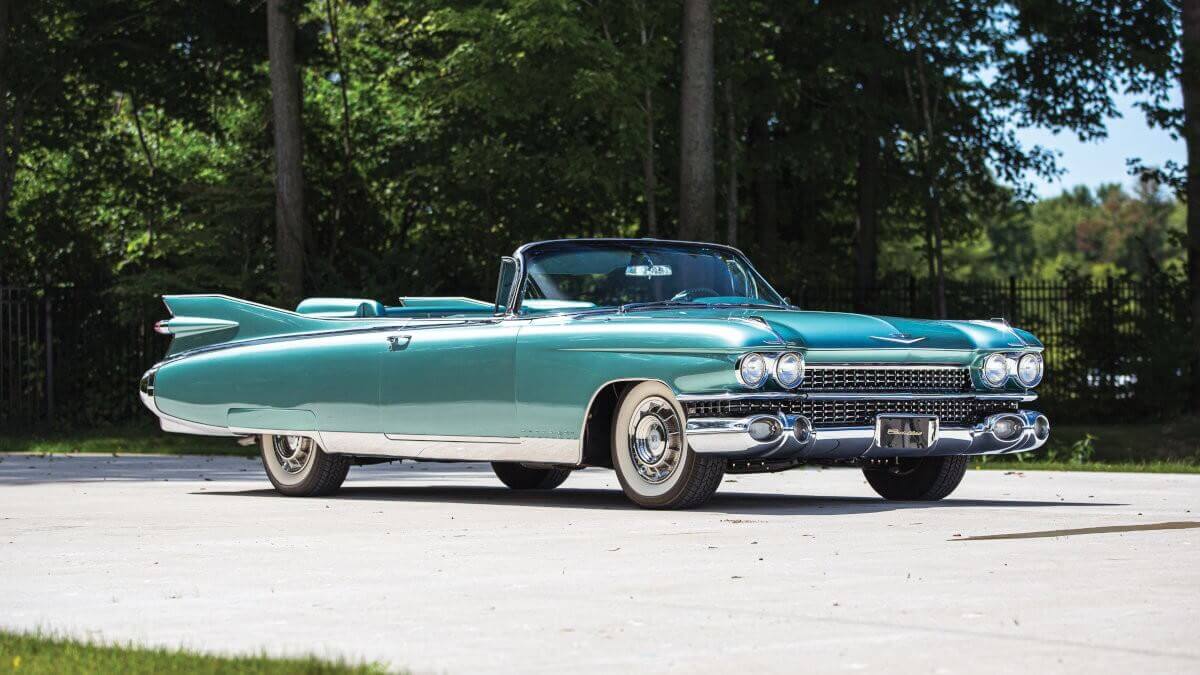 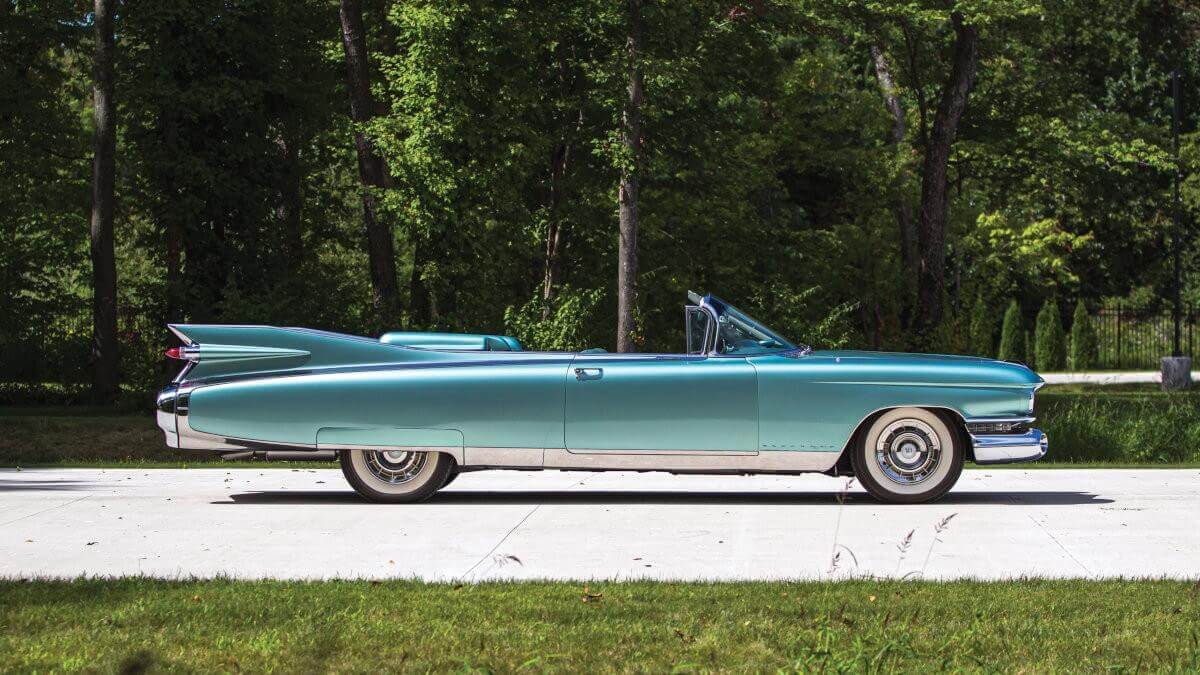 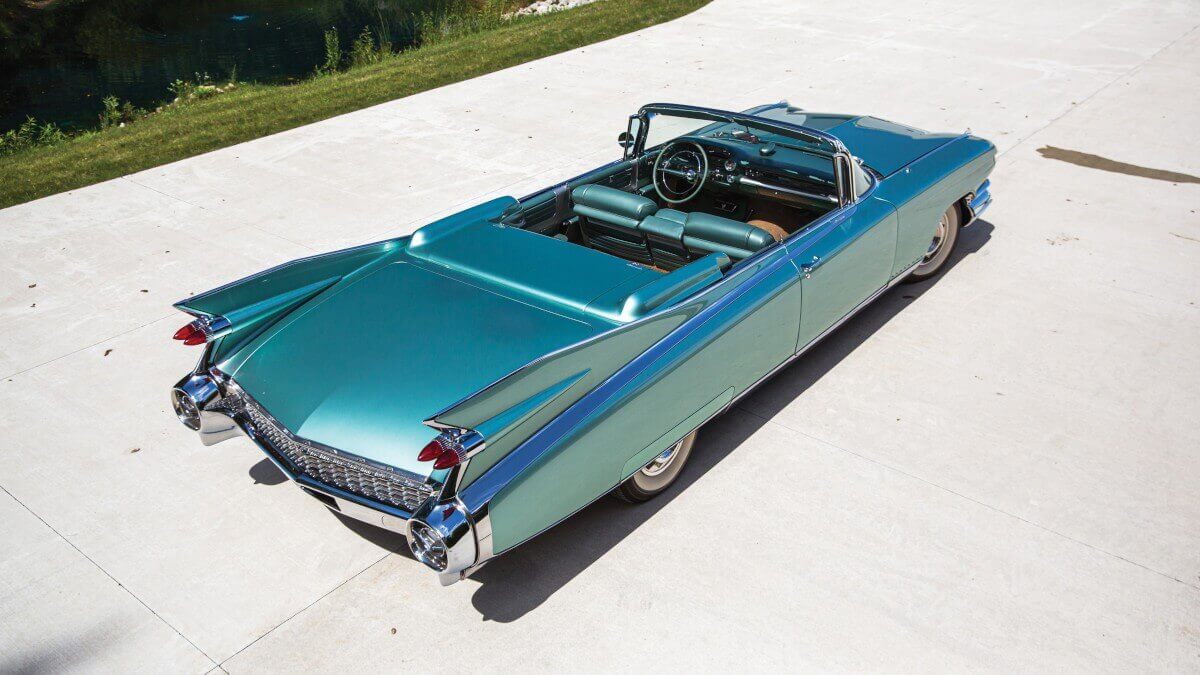 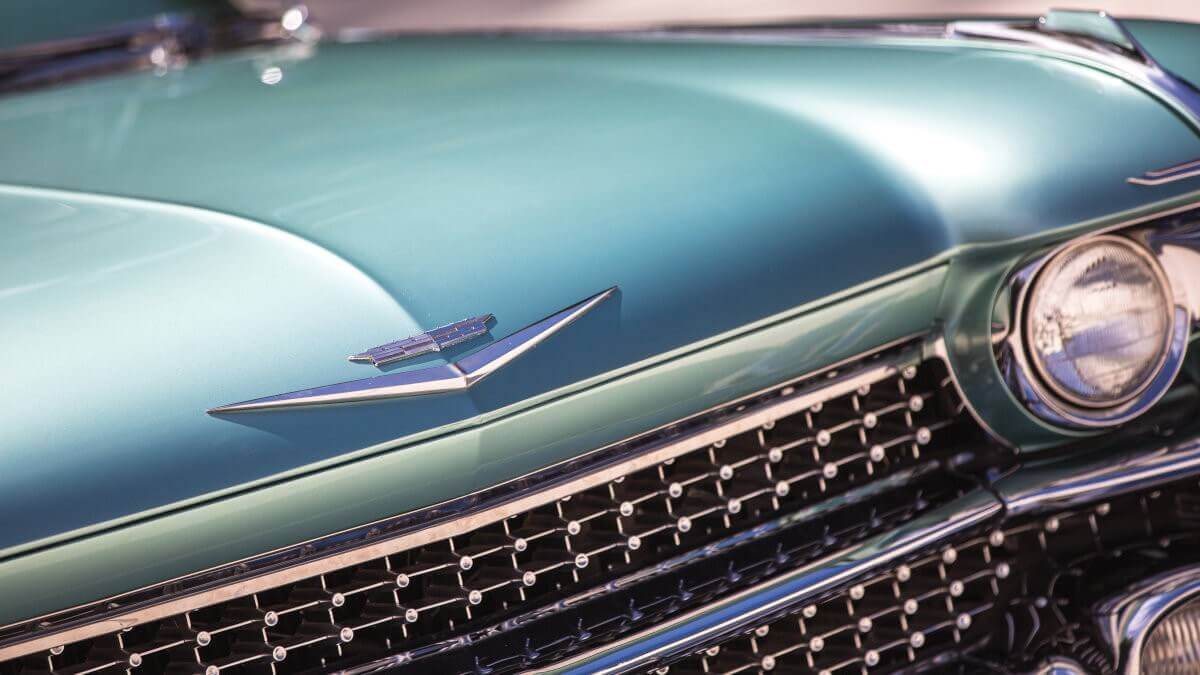 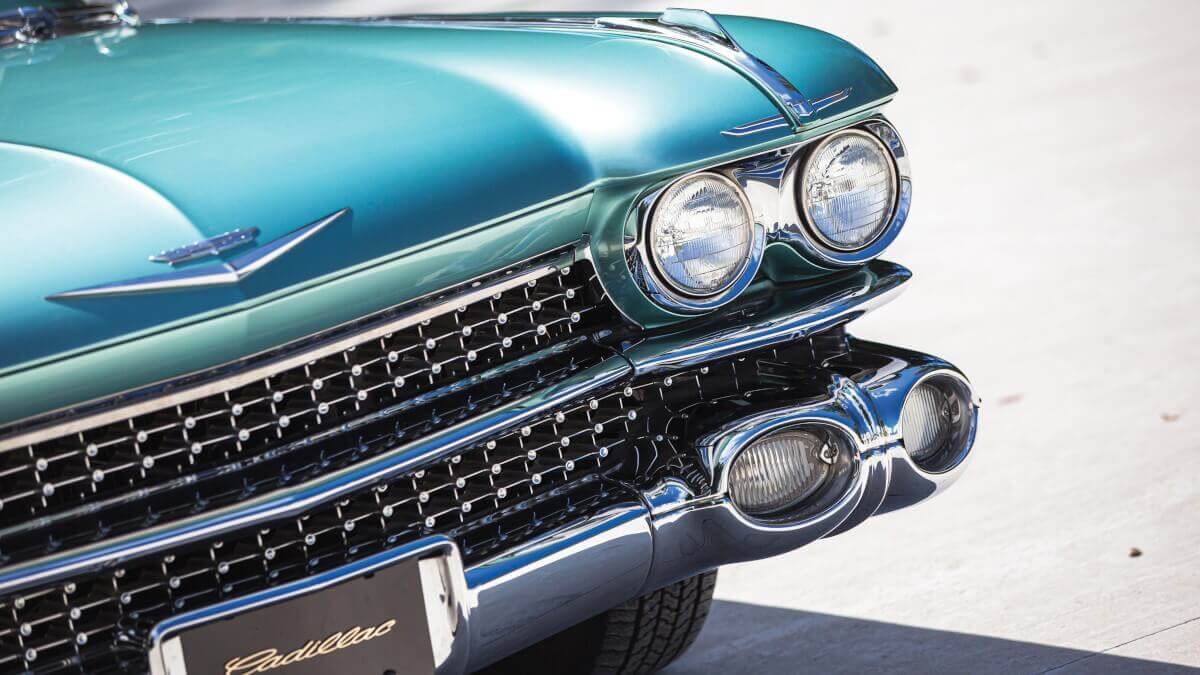 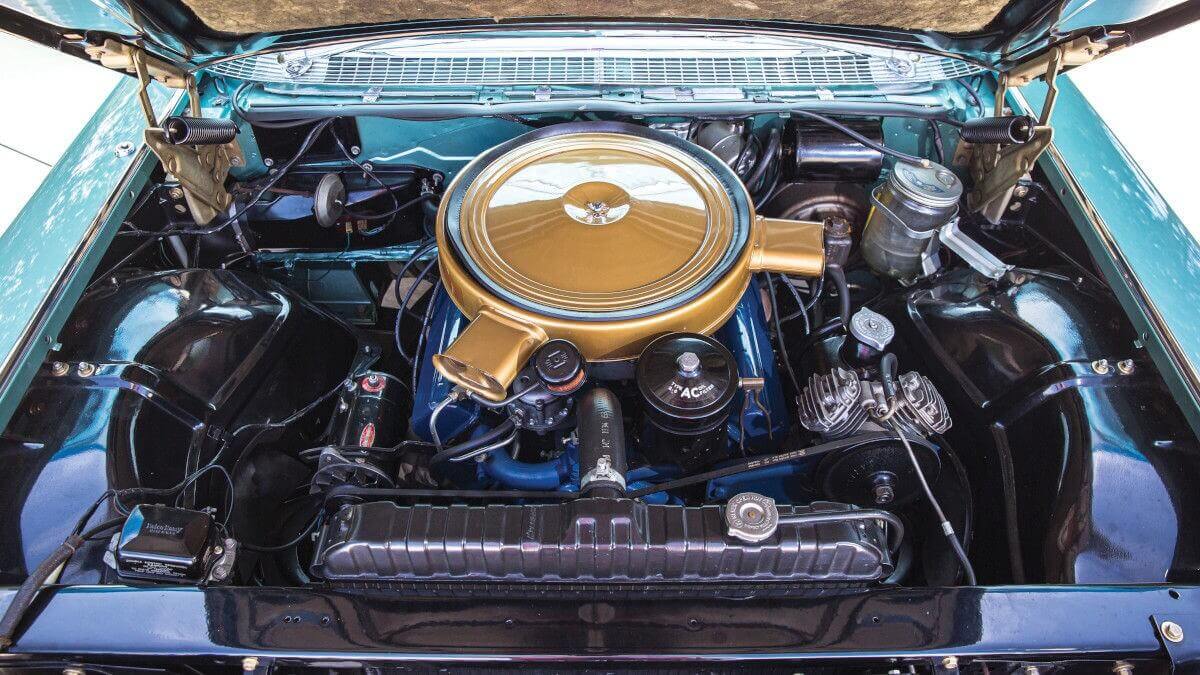 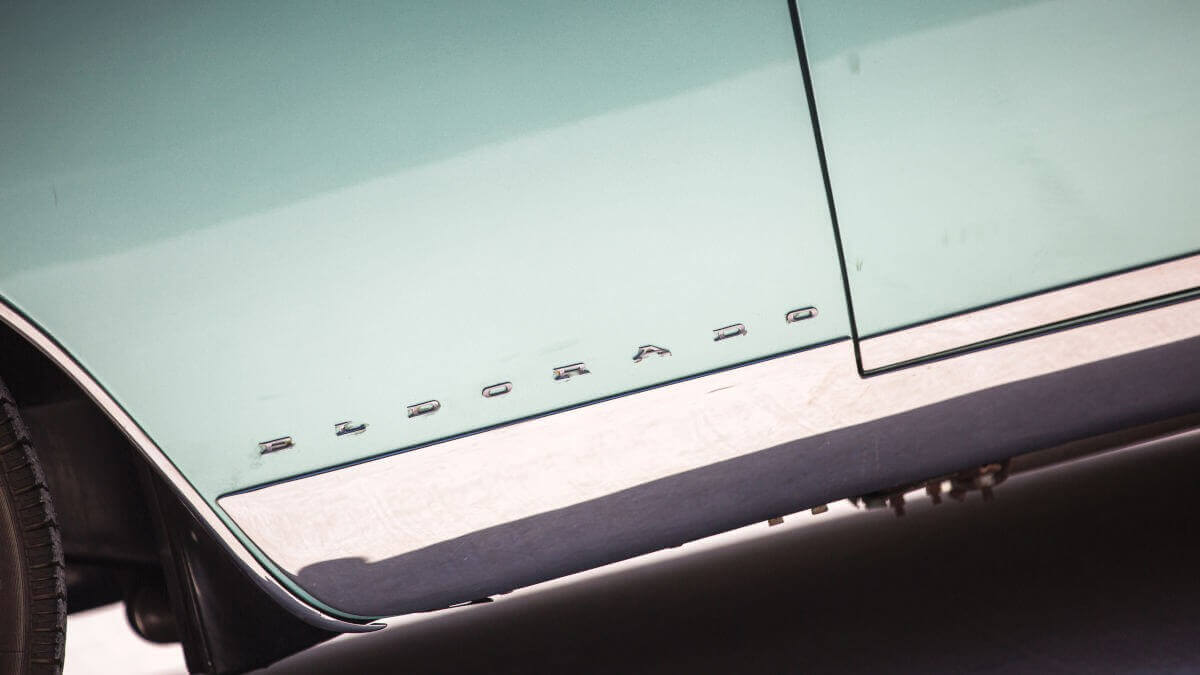 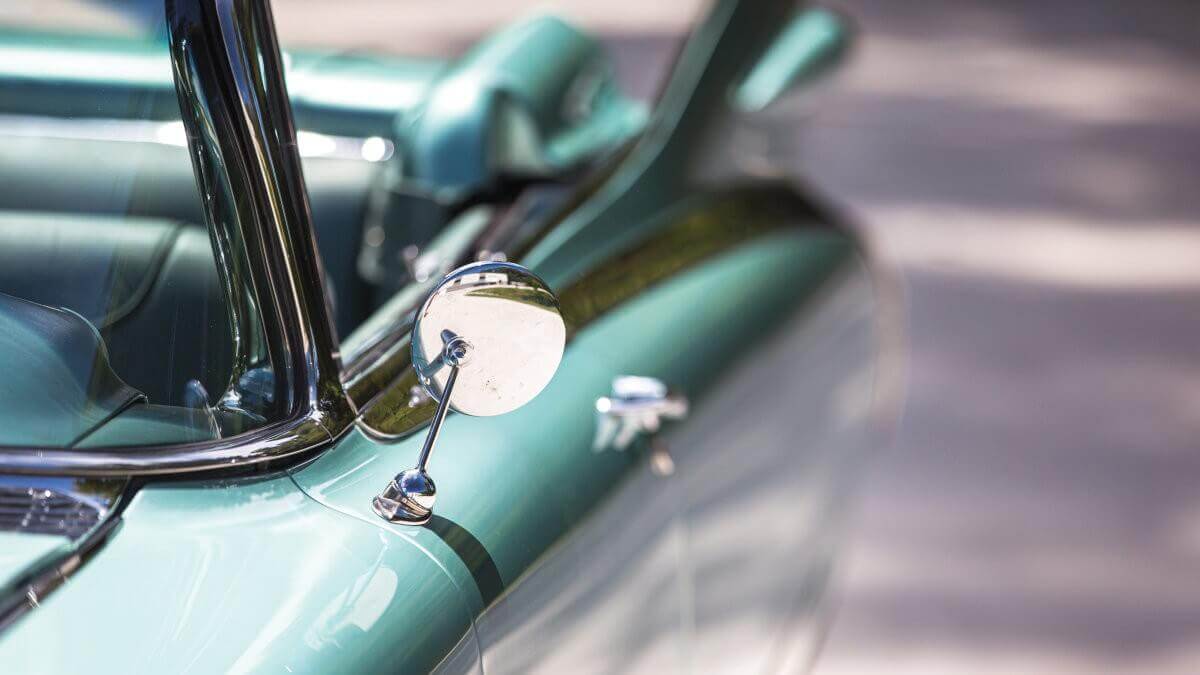 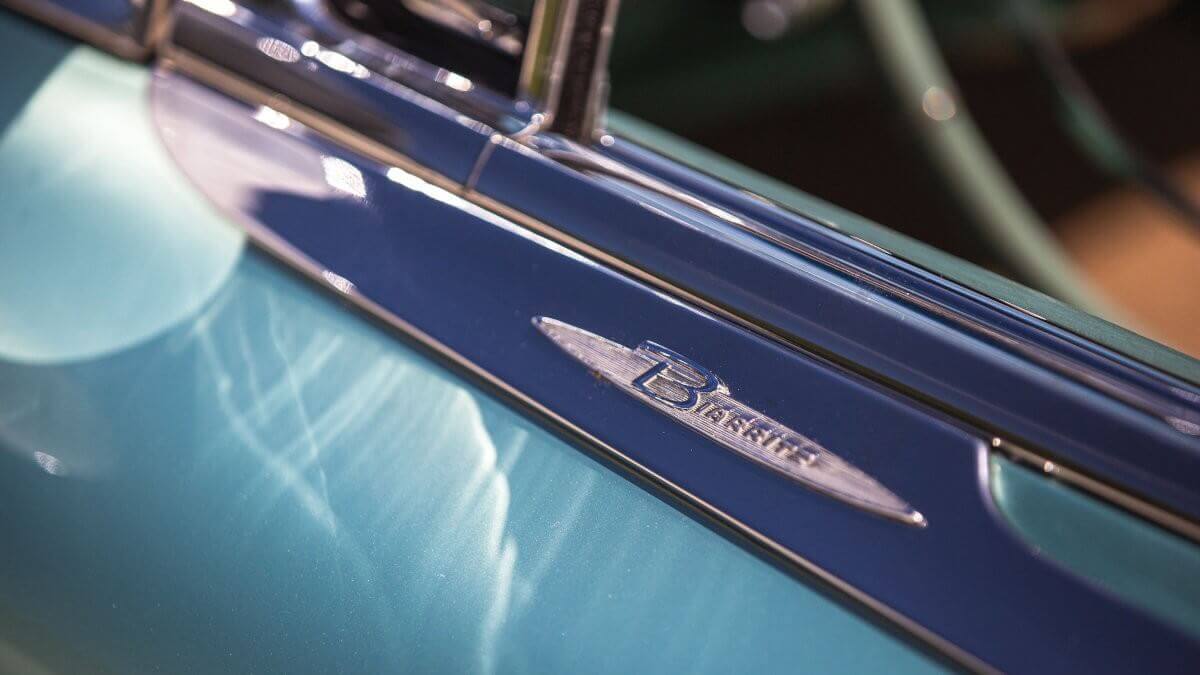 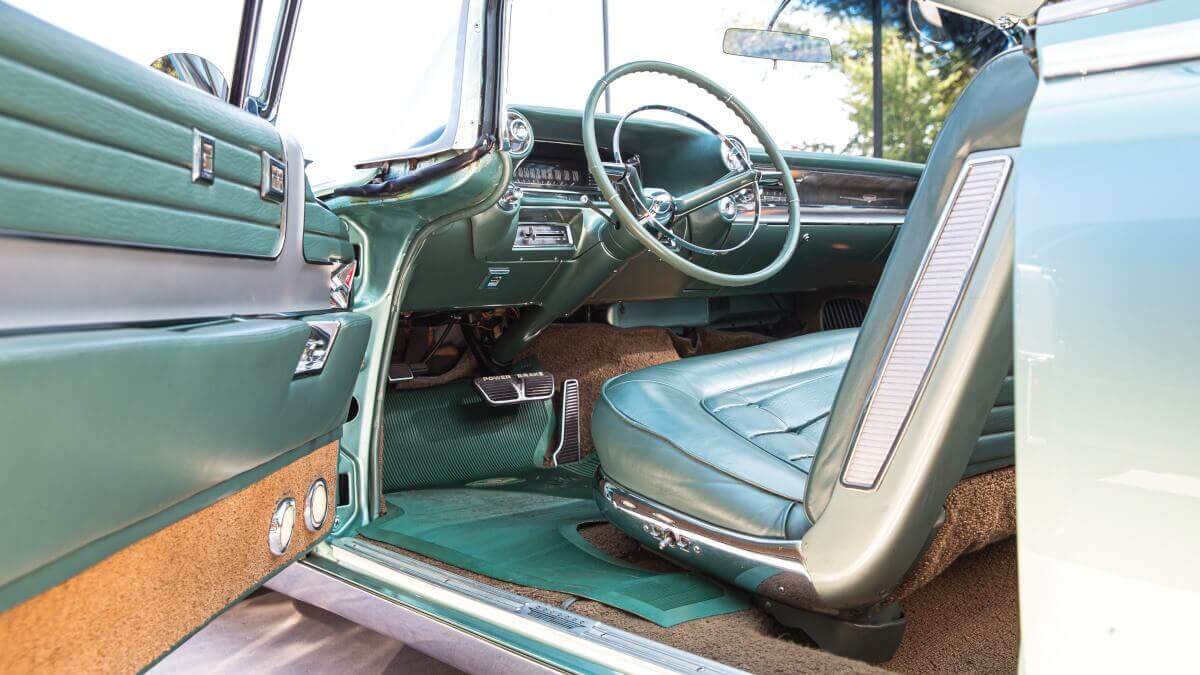 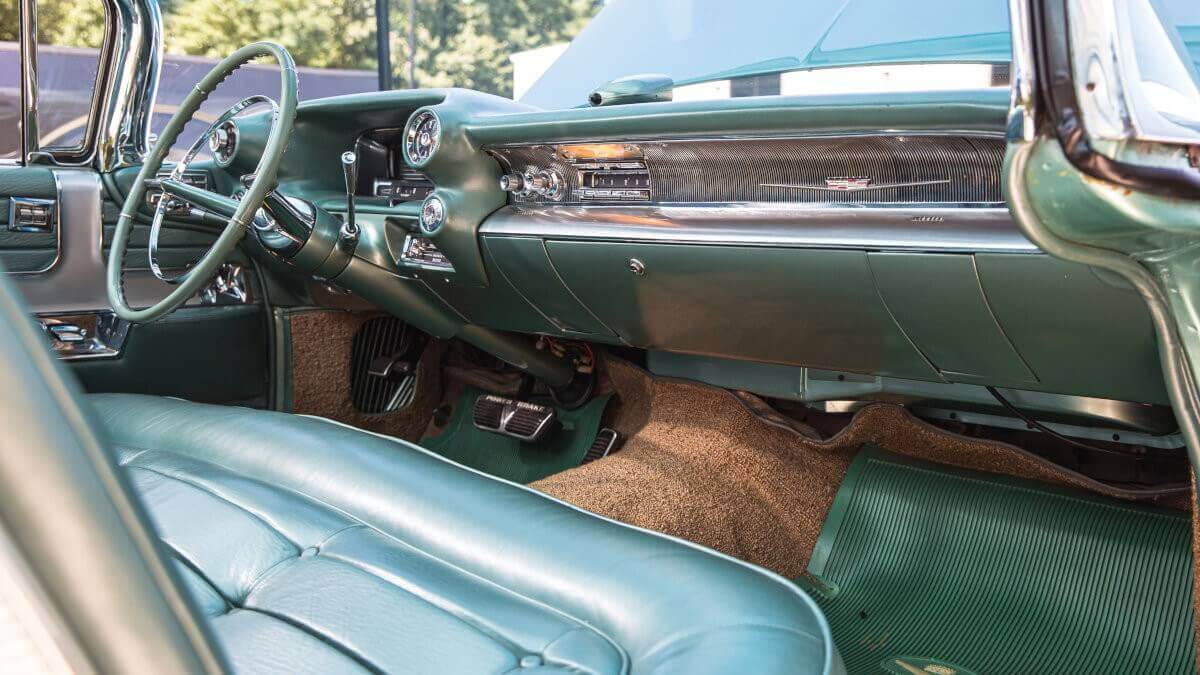 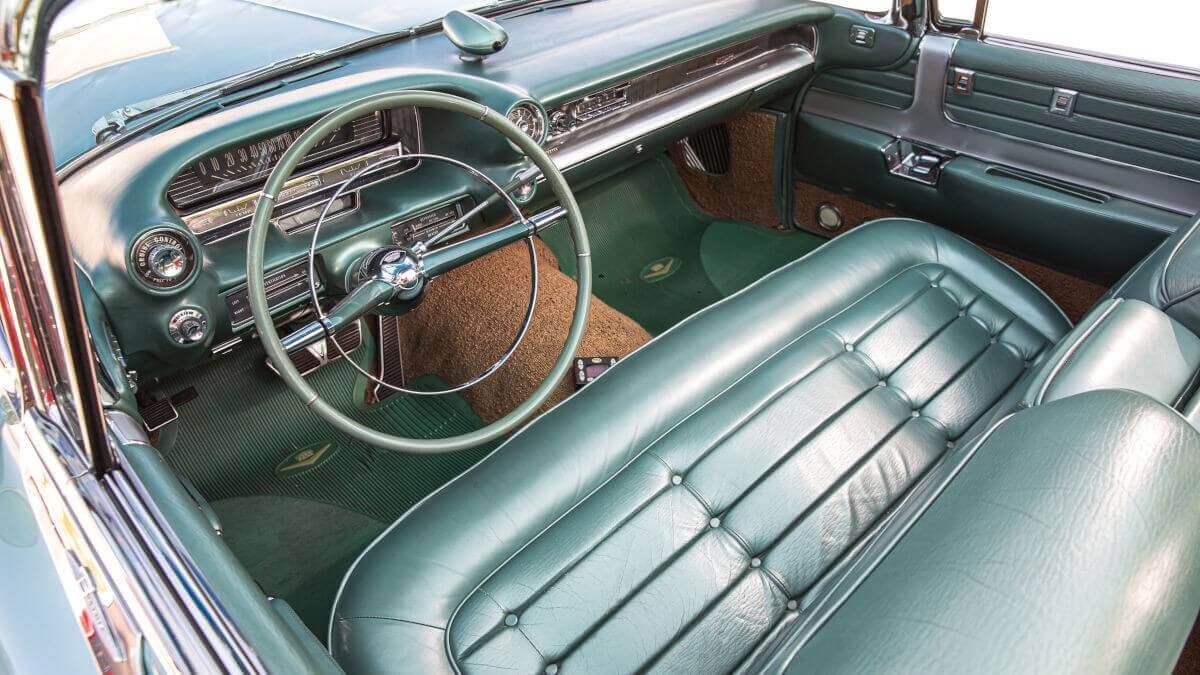 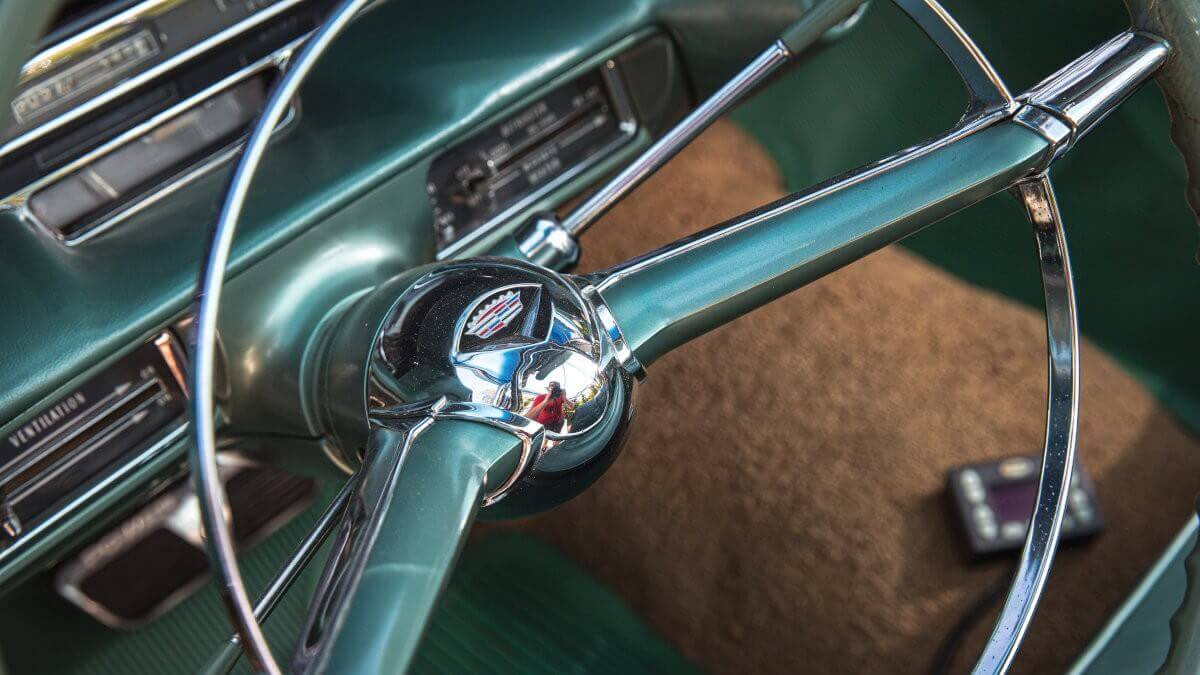 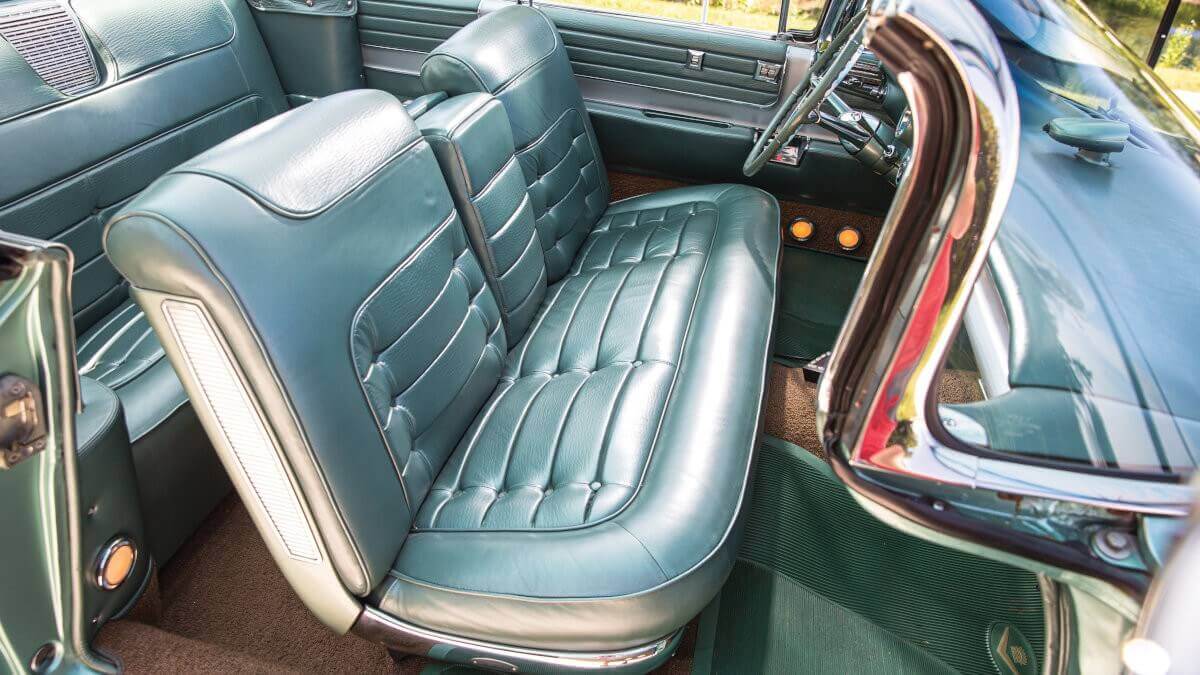 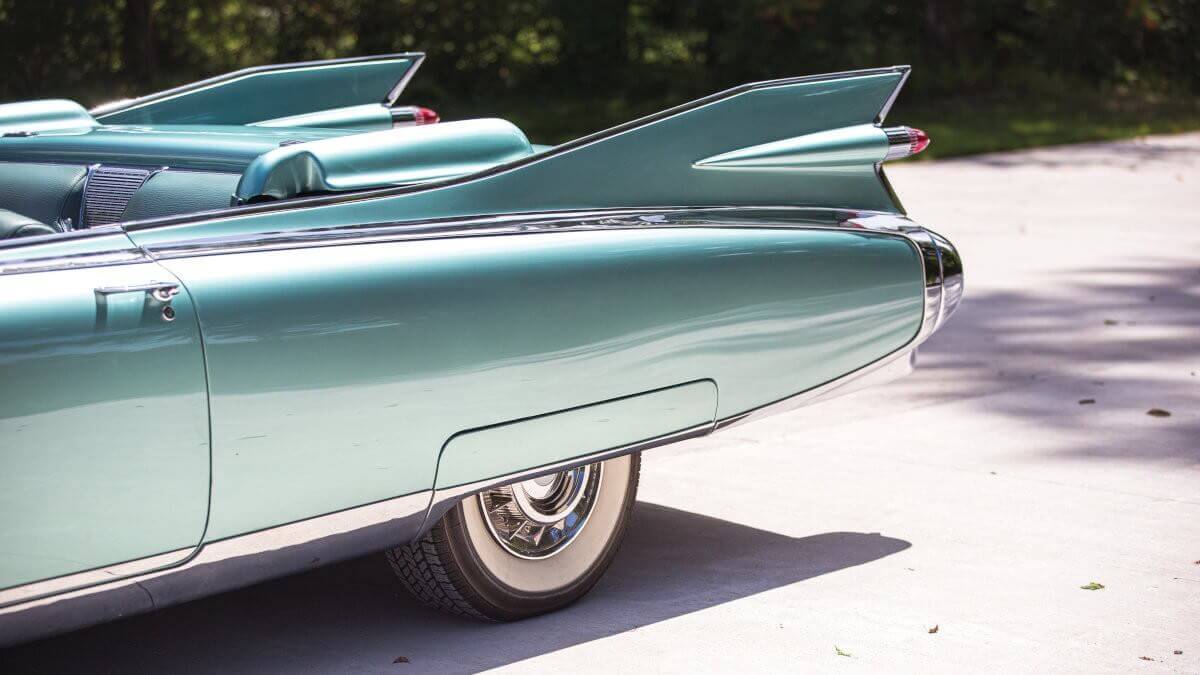 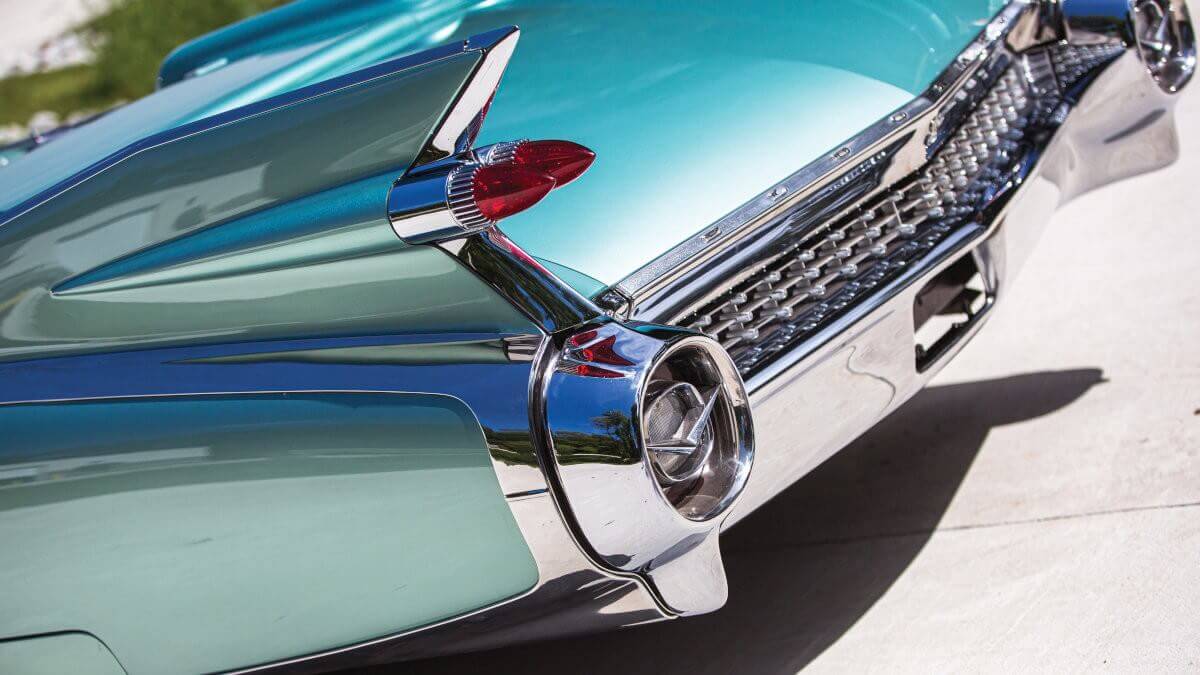 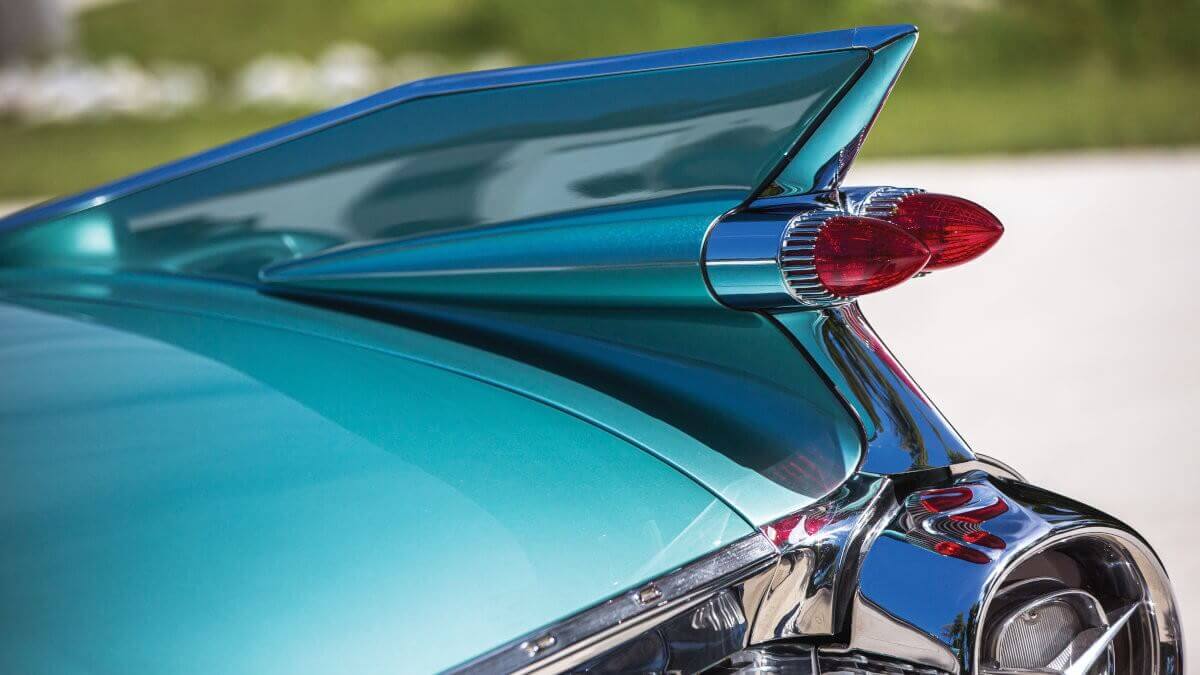 Compared to the Series 62, the Eldorado always had the better equipment. Power steering, power-assisted brakes, reversing lights, dual-speed windshield wipers, power windows, fog lights and six-way power front seats were standard on the Series 6200. The Eldorado Biarritz also received even larger chrome trim, air conditioning and a so-called ‘Magic Eye’. This technology enabled the high beam to be dimmed automatically as soon as light from oncoming traffic was detected. Since these details are known only to a few viewers, many today think that the much more frequently built Series 6200 is the same as the 1959 Eldorado Biarritz, which was only built around 1,320 times.

RM Sotheby’s is offering a restored car at their auction of ‘The Elkhart Collection’ on October 23. The previous owner opted for ‘Hampton Green’, a metallic shade, which was offered exclusively for the Eldorado and also decorated this vehicle ex works. Matching green leather upholstery and a white vinyl top were used. This folds at the touch of a button under the optional three-part ‘Parade Boot’ made of fiberglass reinforced plastic. The green tinted windows were also an option chosen for this car in 1959. In the course of restoration, the Eldorado was given a more durable air suspension compared to the standard system. However, this is included with the car as well as the original operating instructions. RM Sotheby’s expects a hammer price in the range of US$ 225,000 to US$ 275,000.