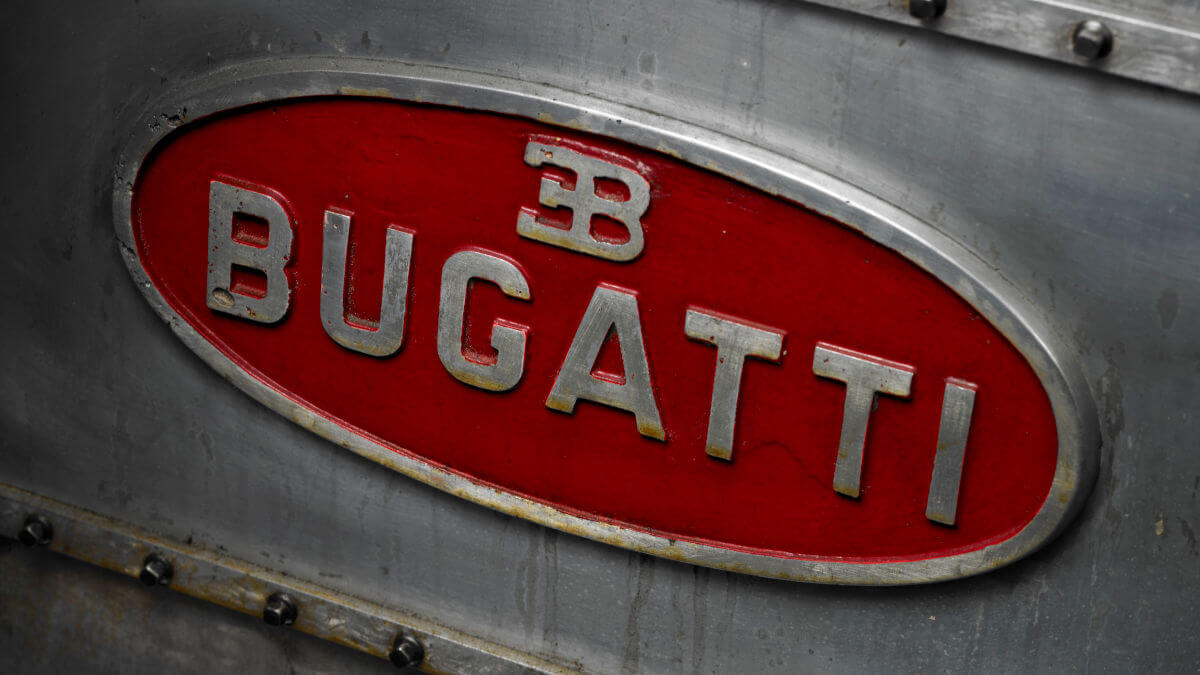 The red, oval Bugatti brand logo has been world-famous for over 110 years. At the end of 1909, the company’s founder Ettore Bugatti first attached a metal badge to the radiator grille of a car he developed, a Type 13. He had the idea for the white lettering on a red background some time before, when he was still working for Deutz in Cologne, Germany. Red symbolizes power and passion, white the elegance and nobility. In addition, black is used for the joined initials of the company founder above the brand name lettering, which stands for excellence and courage. Around the red area are 60 red dots on a white band, which according to legend symbolize pearls or wires in the style of ‘Art Noveau’.

As a resourceful engineer, Ettore Bugatti not only took care of the basic design, but also of the construction drawings. These show that the basic shape is created by cutting a cylinder with a diameter of 45 millimeters at an angle of 30 degrees. A large radiator figure, as was common for other brands at the time, was out of the question for a Bugatti, as it would have disturbed the airflow. Only the stately Type 41 Royale was an exception and received a replica of the standing elephant that his brother Rembrandt Bugatti had designed as a statue shortly before his death. Thanks to red enamel, the logo nevertheless received a three-dimensional effect. 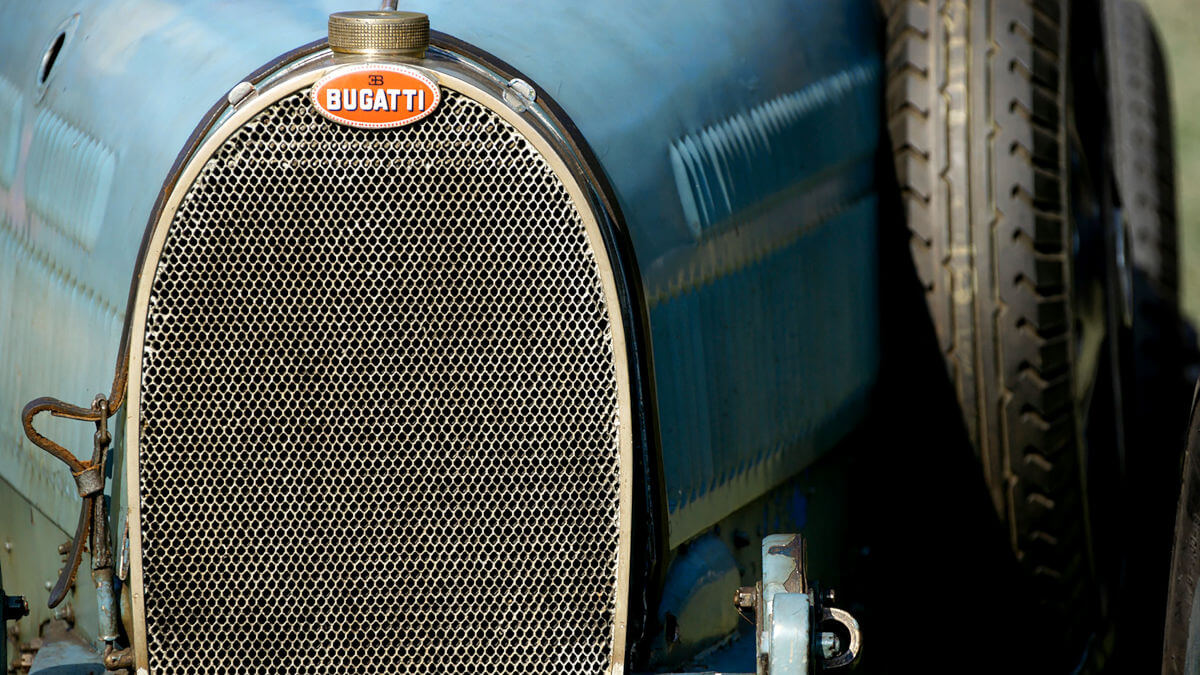 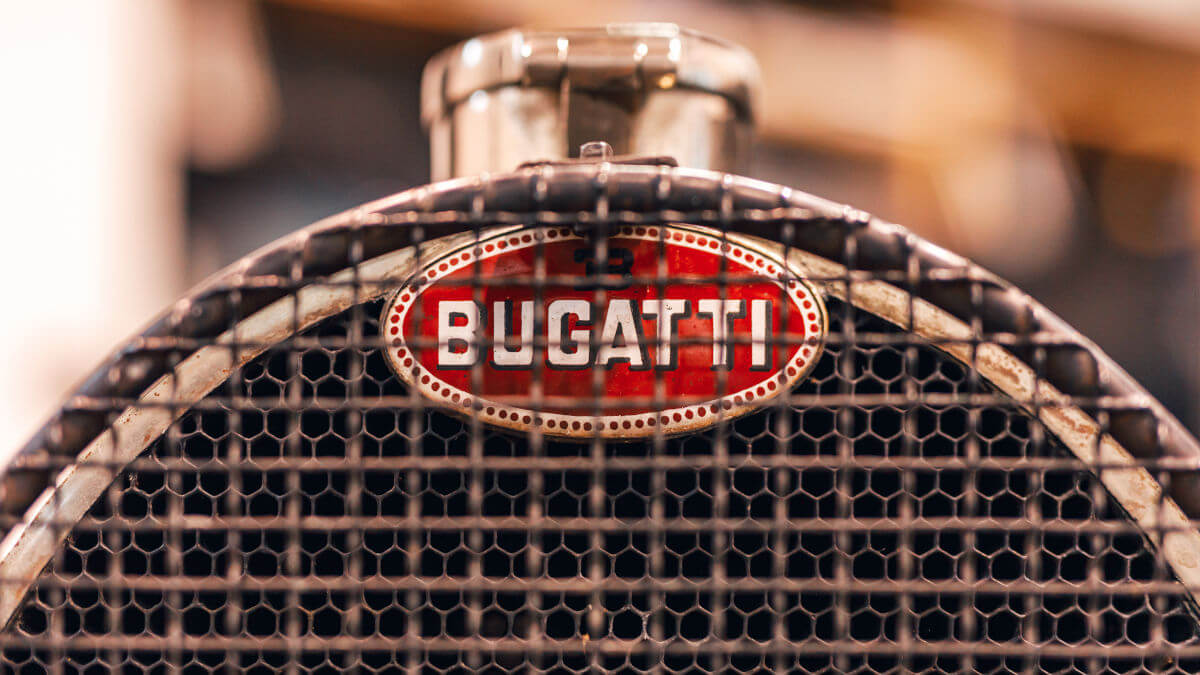 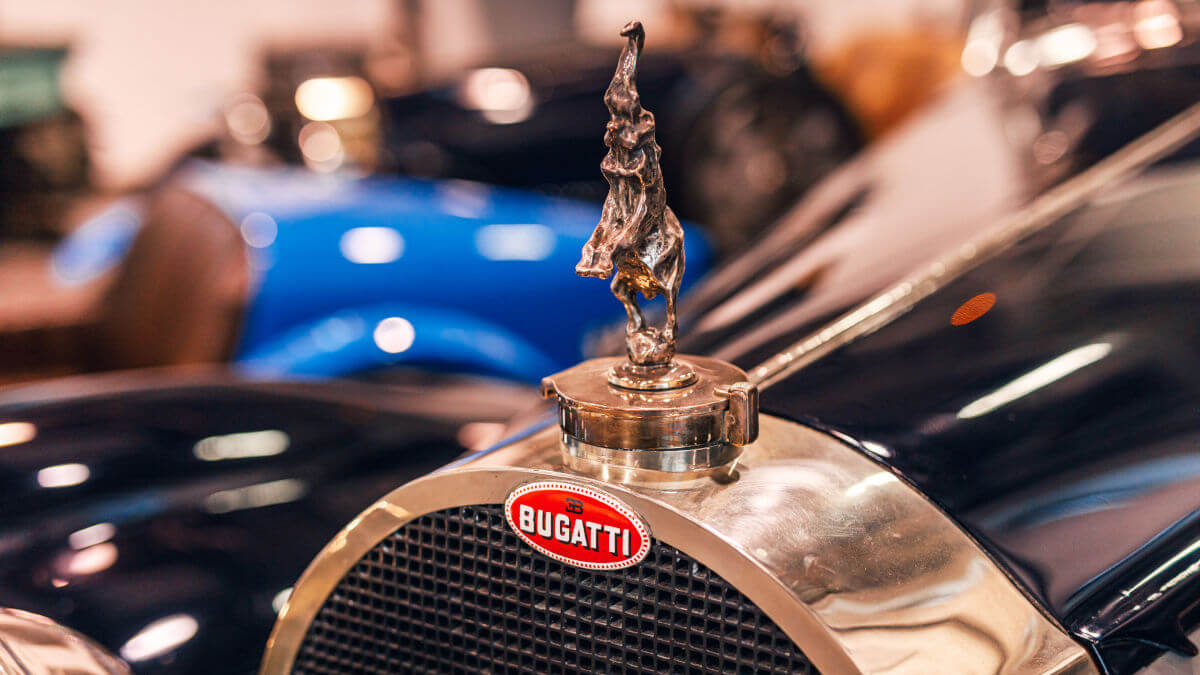 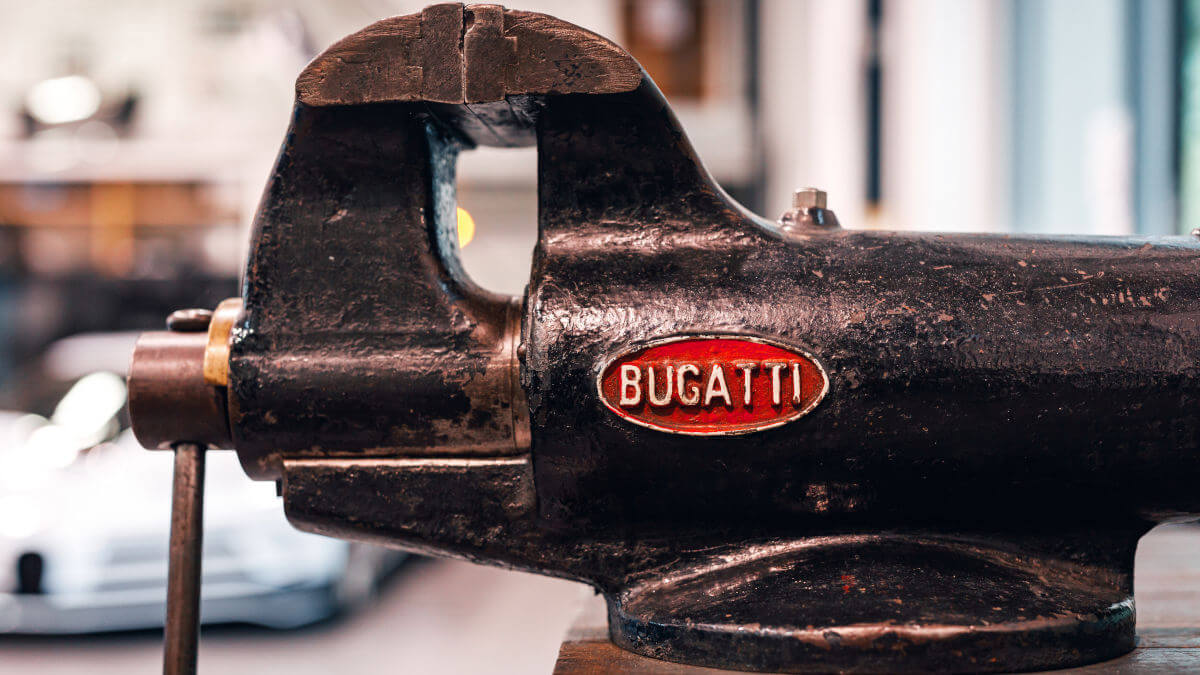 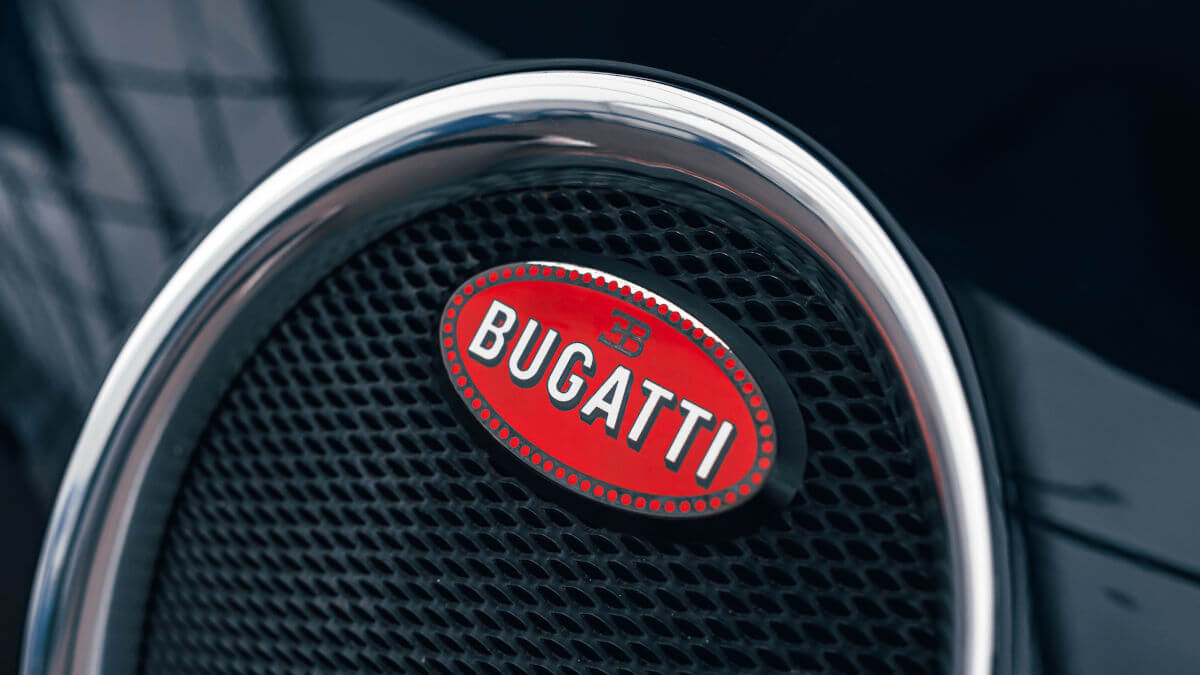 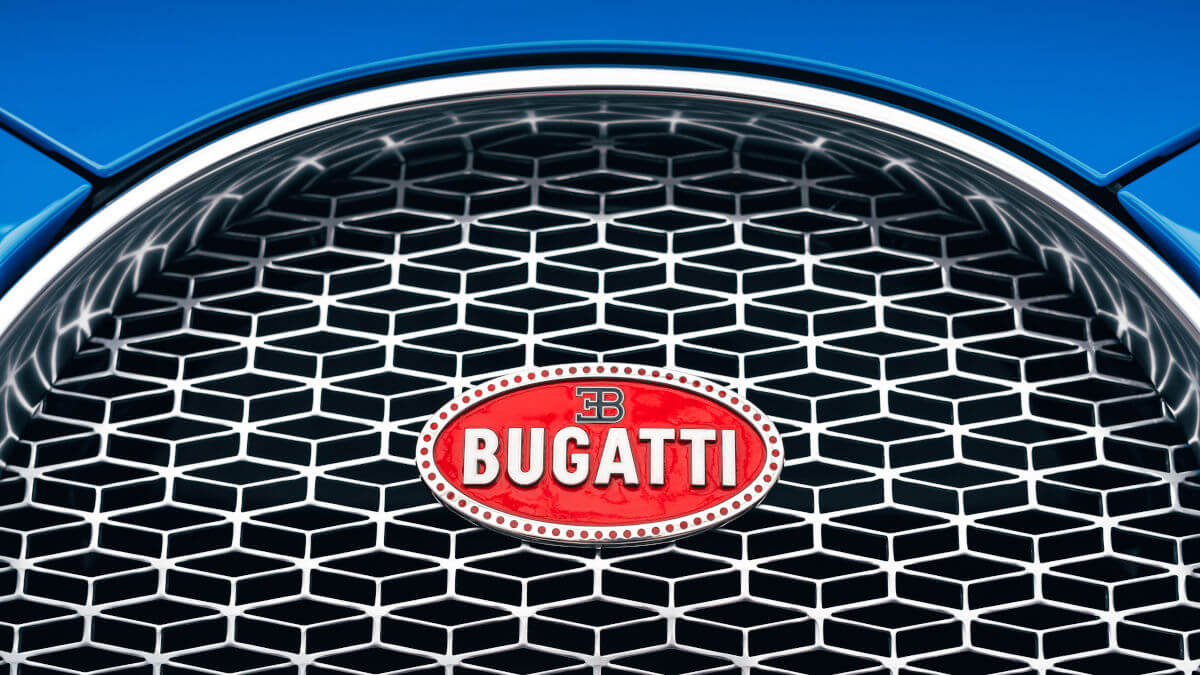 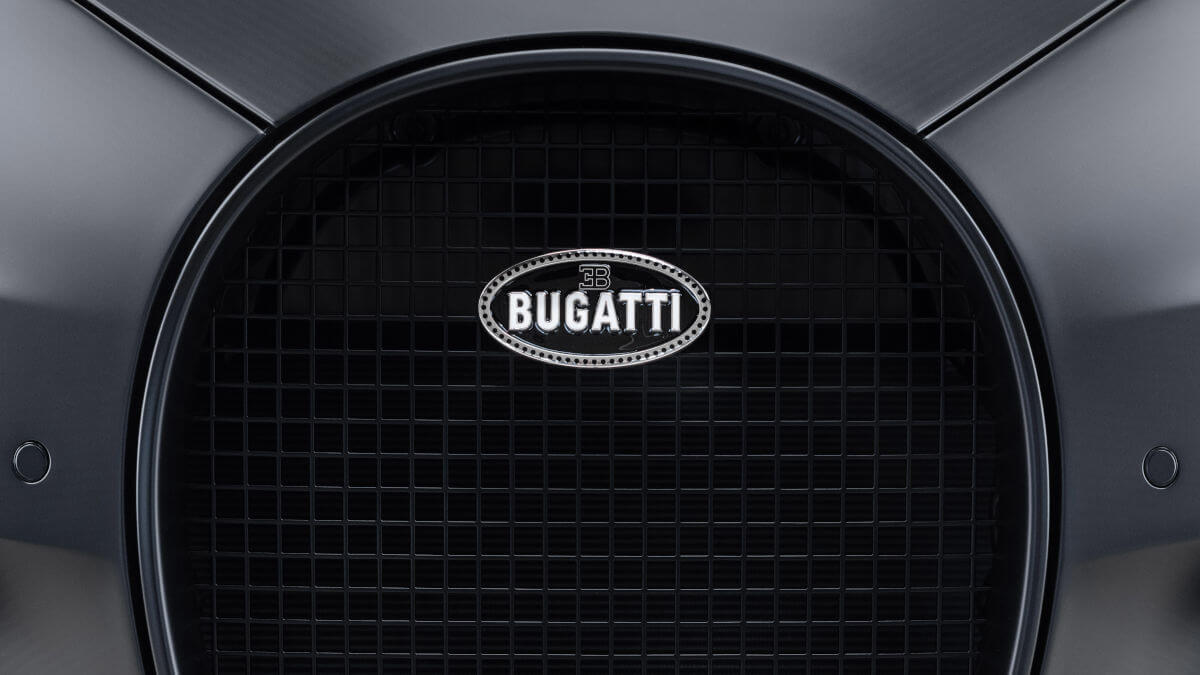 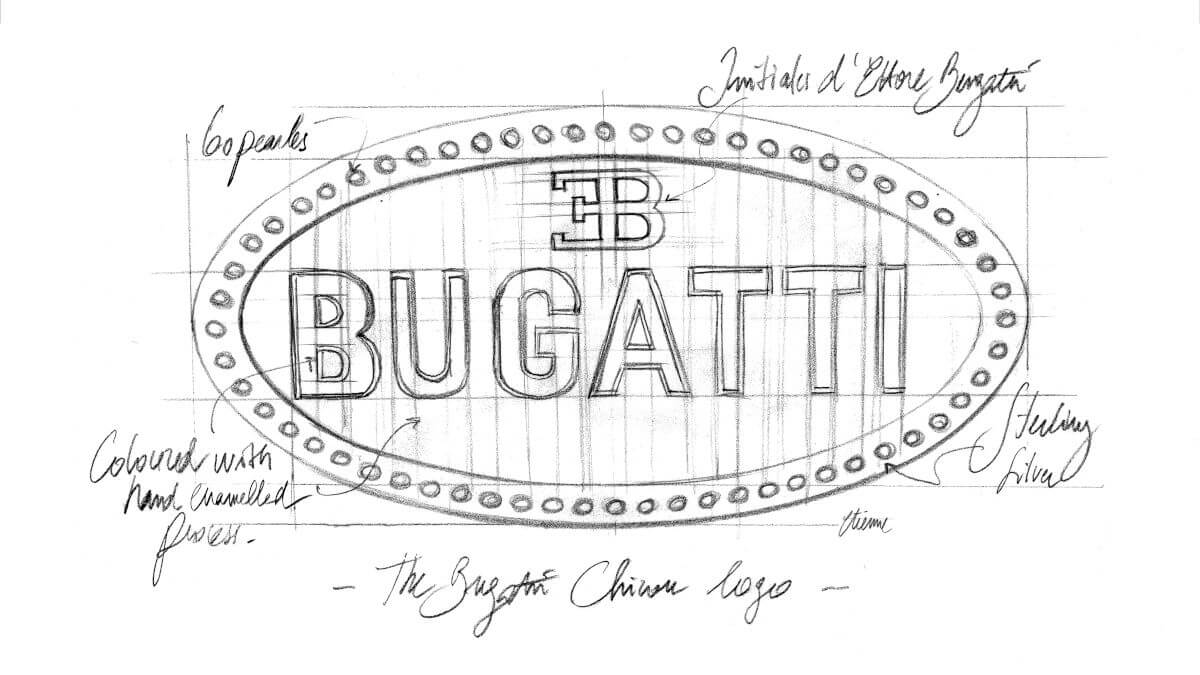 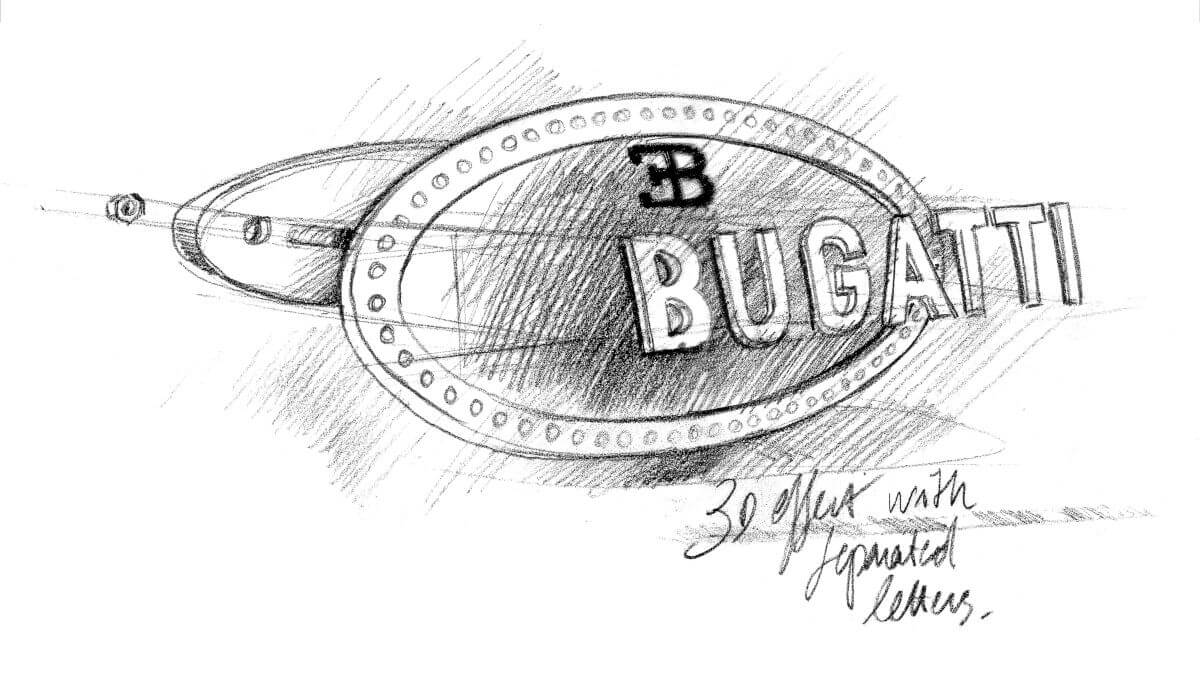 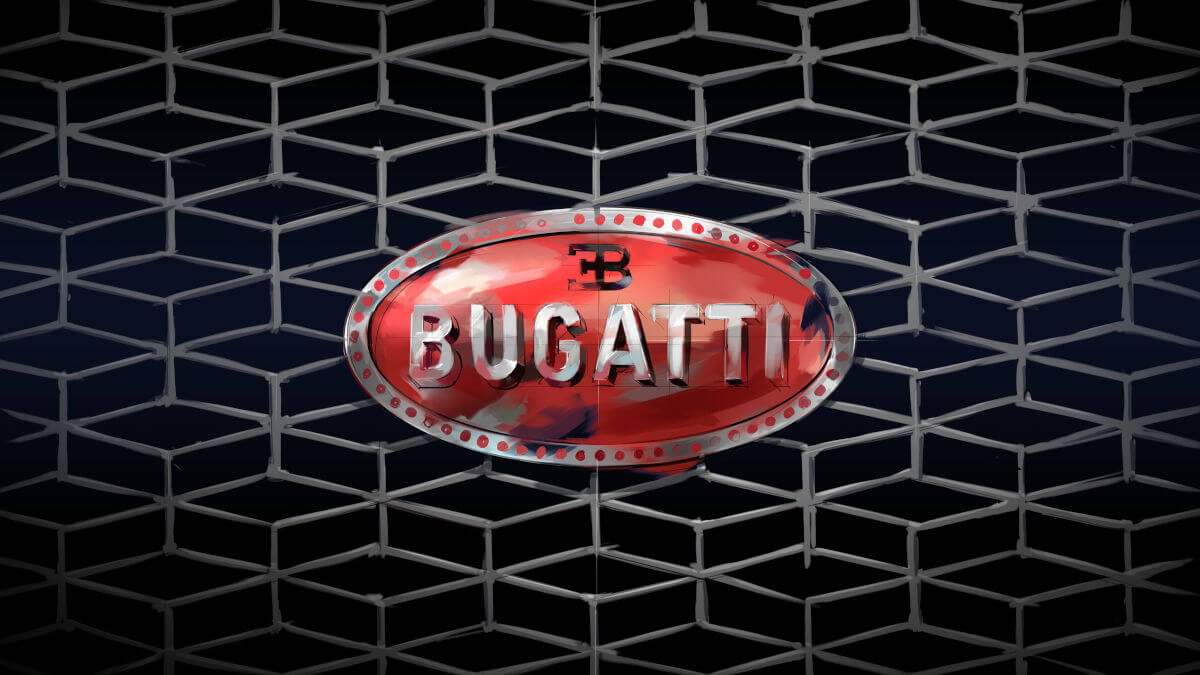 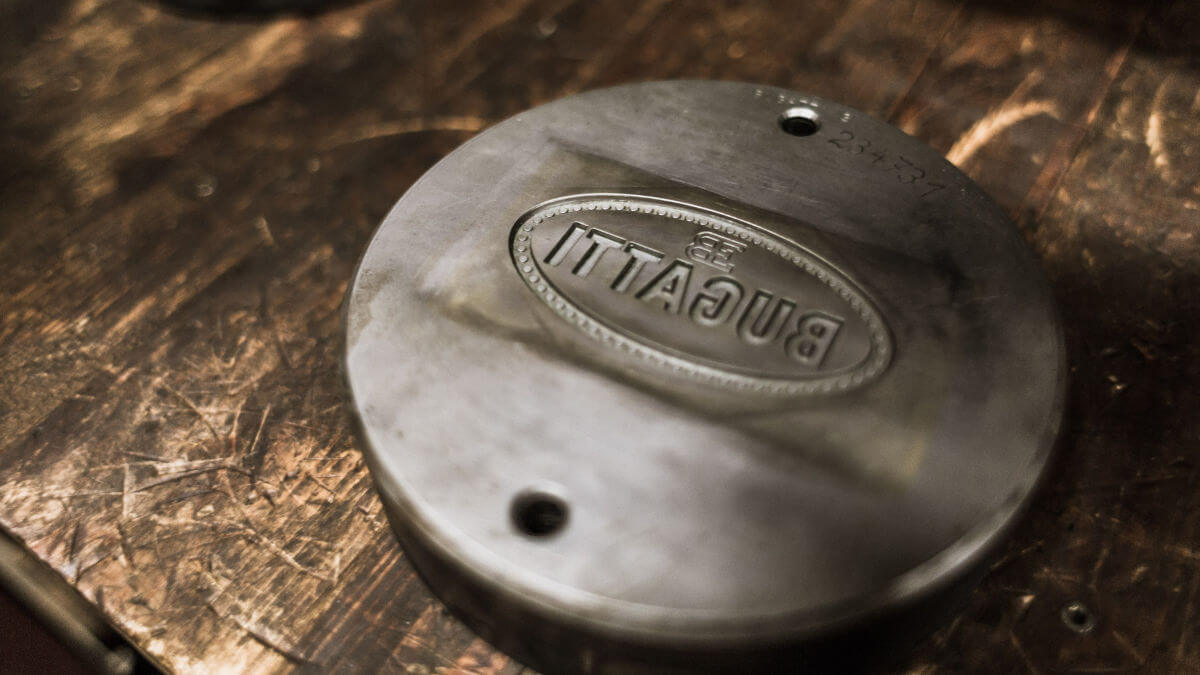 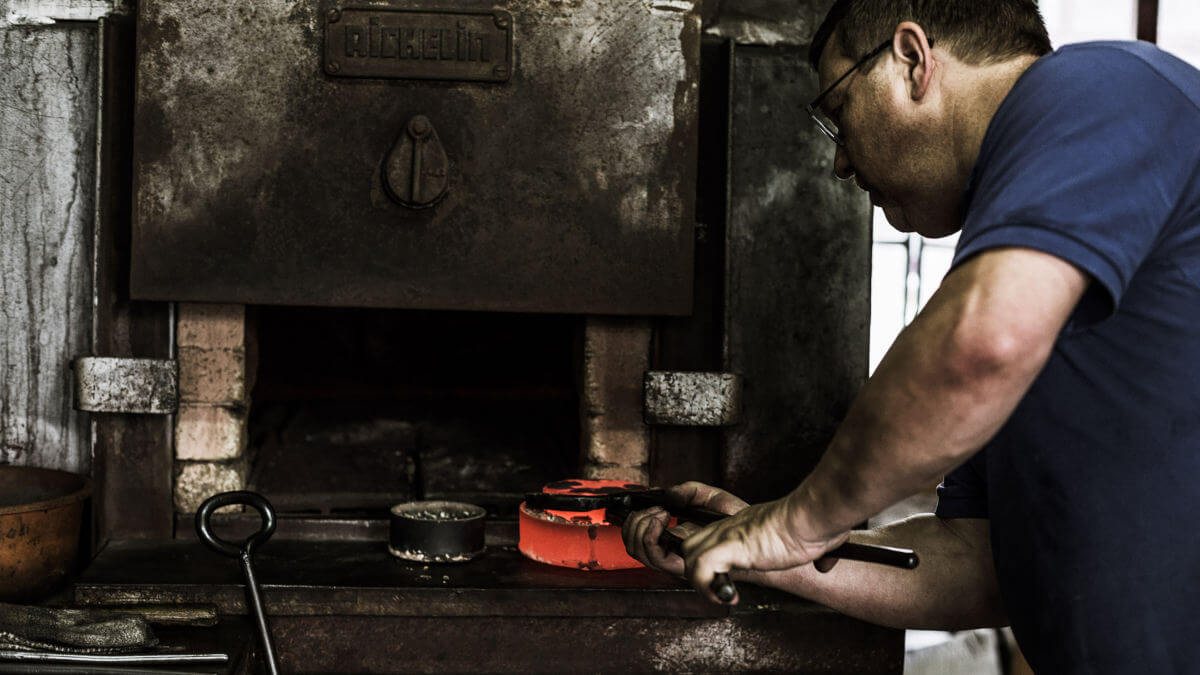 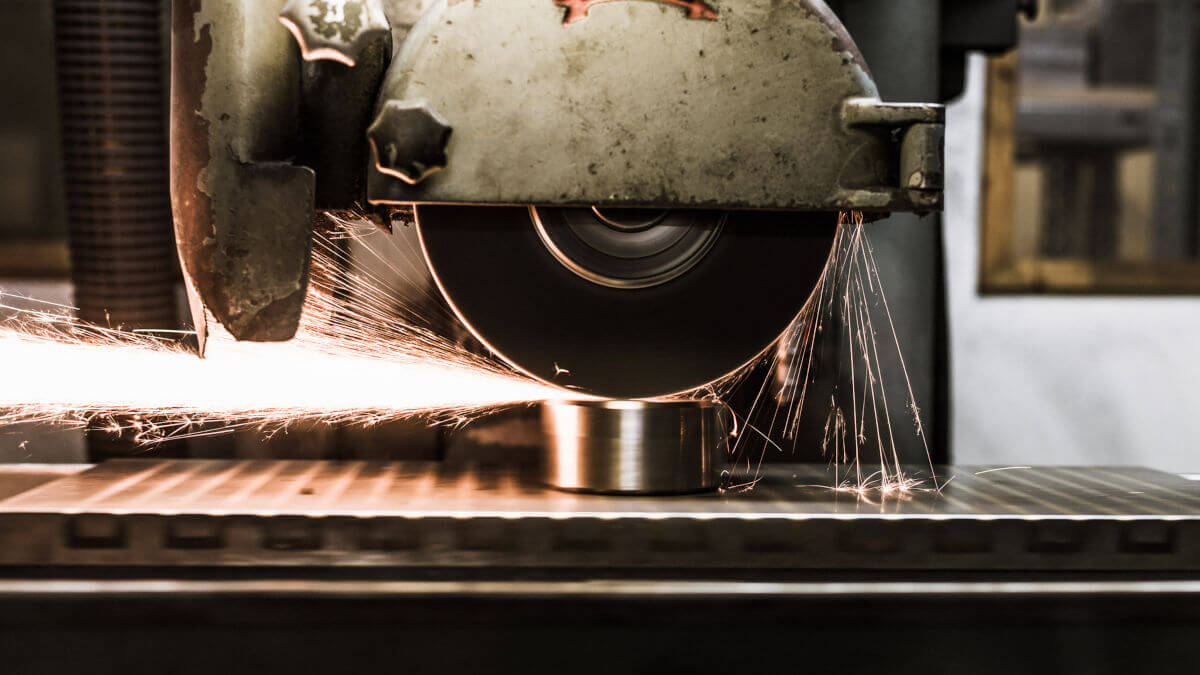 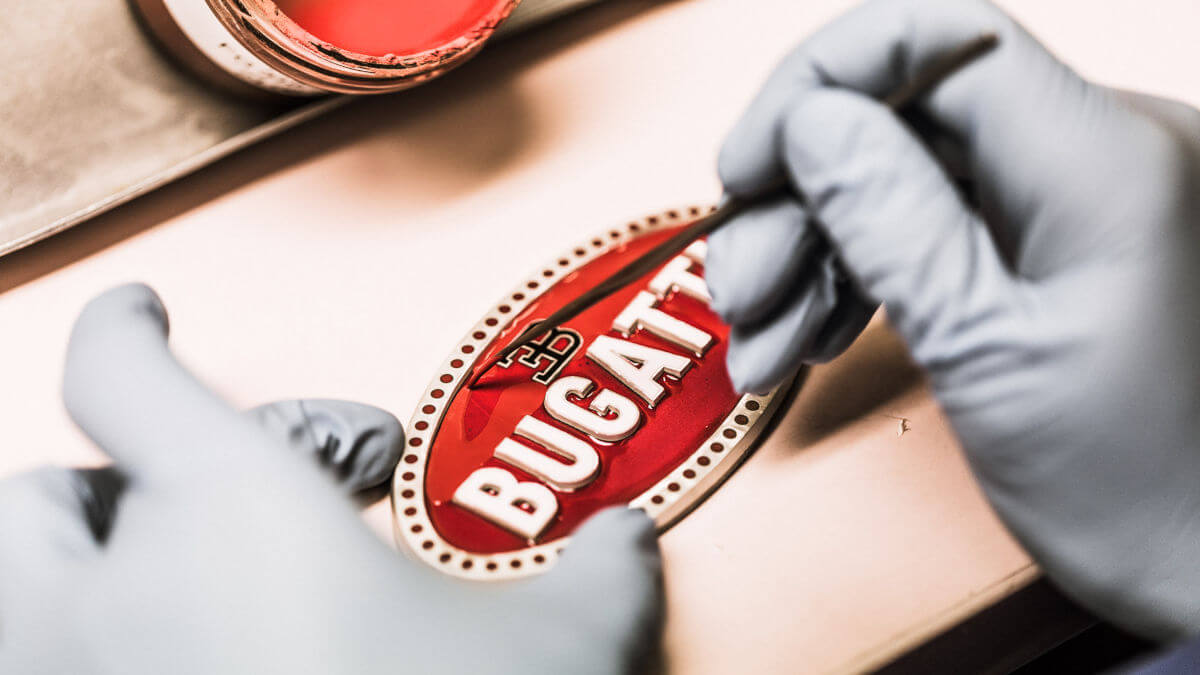 Since the revival of Bugatti as a part of Volkswagen Group, the logos made of solid 970 sterling silver have been created by the company Poellath GmbH & Co. KG Münz- und Prägewerk in Schrobenhausen, Bavaria, whose history dates back to 1778. The dots and letters of the modern badges have been raised by around two millimeters, which enhances the three-dimensional effect. Compared to the Veyron, the logos on the Chiron grew 14 millimeters in width and eight millimeters in height. For special edition models such as the Veyron Super Sport WRC, the Veyron Grand Sport Vitesse WRE, the Chiron Noire or the Chiron Super Sport 300+, Bugatti had the background color of the badge changed to black. Poellath also creates the small logos for the car keys.

Employees of Poellath need a total of more than ten working hours for the production of the vehicle logos, which are spread over several working days due to cooling and drying times. It all starts with the repeated embossing of the silver blank in a 1,000-ton press, which makes the contours more clearly visible than in comparable castings. This is followed by the painting with enamel, which is glass melted onto iron. The enamel developed for Bugatti was specially designed to be free of pollutants. In the past, enamel consisted of about half lead. To apply the enamel, the glass-like granules must be heated to 750 to 900 degrees. At around 600 degrees, the enamel already solidifies while the silver layer behind it contracts further, thus creating a slight curvature of the macaron logo. The grinding and polishing processes are then carried out by hand. Finally, an employee soldered the fastening bolts on the back. These hold the logo in the horseshow-shaped radiator grille of the respective vehicle.