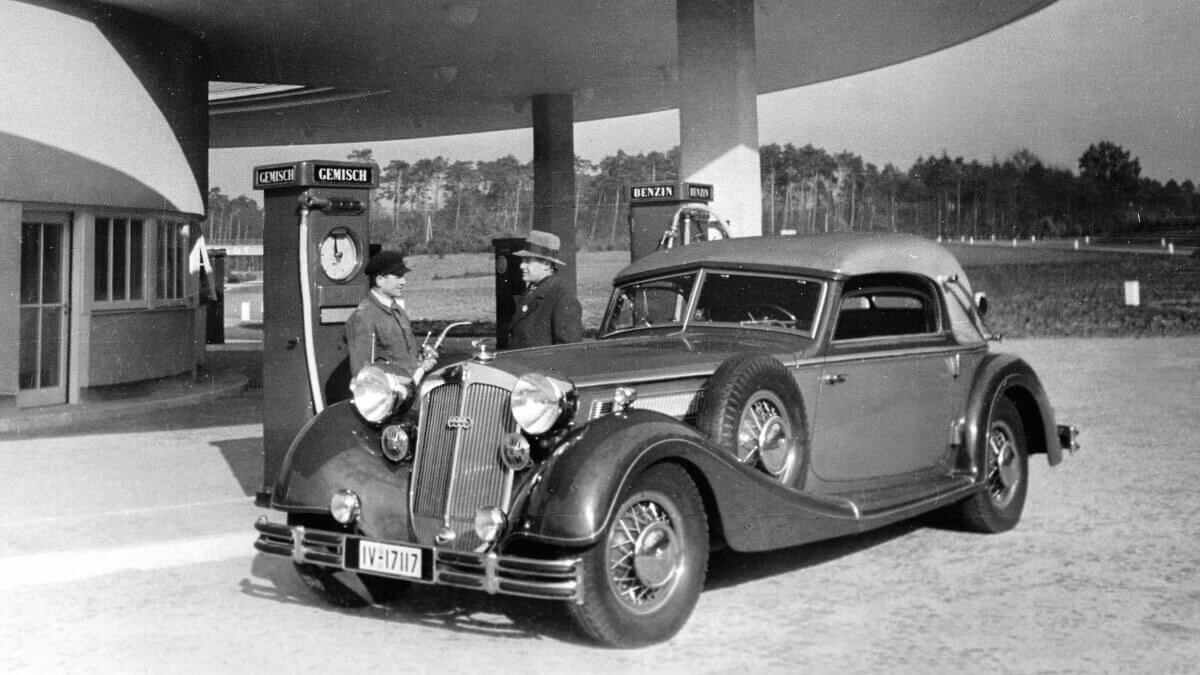 Nowadays, if you want to buy a representative luxury class convertible, the way leads to Bentley or Rolls-Royce, maybe even to Mercedes-Benz for the S-Class Convertible. In the 1930s, the range of cars on offer was much wider. In addition to the brands mentioned, there were also corresponding offers from Maybach, Delage, Delahaye, Hispano-Suiza or in the USA from Cadillac, Duesenberg and others. Another German manufacturer in this illustrious field was Horch from Zwickau. There, luxury class vehicles with the best possible equipment rolled off the assembly line. Based on the 850 sedan, which was newly presented in 1935, the 853 Sport-Cabriolet with a wheelbase shortened by 25 centimeters to 3.5 meters was presented at the same time. The underlying ladder frame with crossbar was now made of box-shaped profile tubes and no longer of open U-profiles as in the predecessor model. In contrast to the 850 with a rigid rear axle, a double-jointed rear axle based on the DeDion principle was also used here for the first time.

A five-liter inline eight cylinder engine was concealed under the long, two-part bonnet, initially transmitting 74 kW/100 hp to the rear wheels via a four-speed gearbox. For an extra charge, there was a gearbox with overdrive, which was called a ‘high speed gearbox’ by Horch. This was added to the Horch 853 A offered from 1938 as standard equipment. The topspeed was 135 kph (83.8 mph). This value remained even after the power increased to 88 kW/120 hp by a new camshaft in 1937. All around hydraulic drum brakes with an early form of servo assistance provided the necessary deceleration. 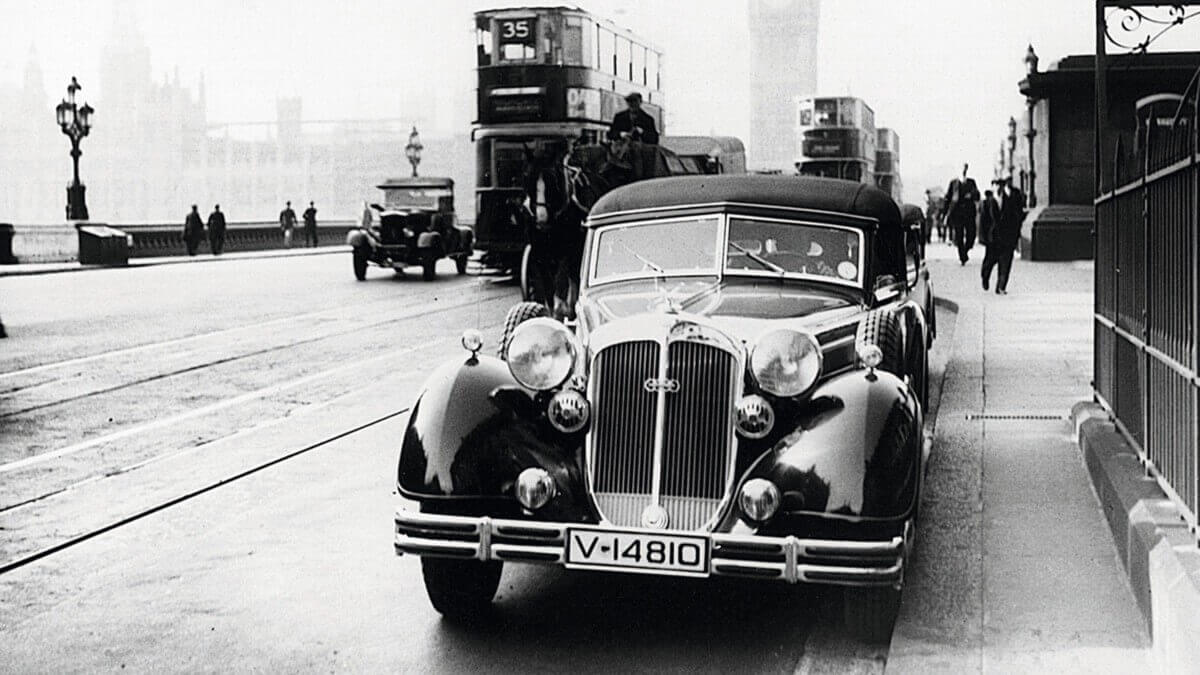 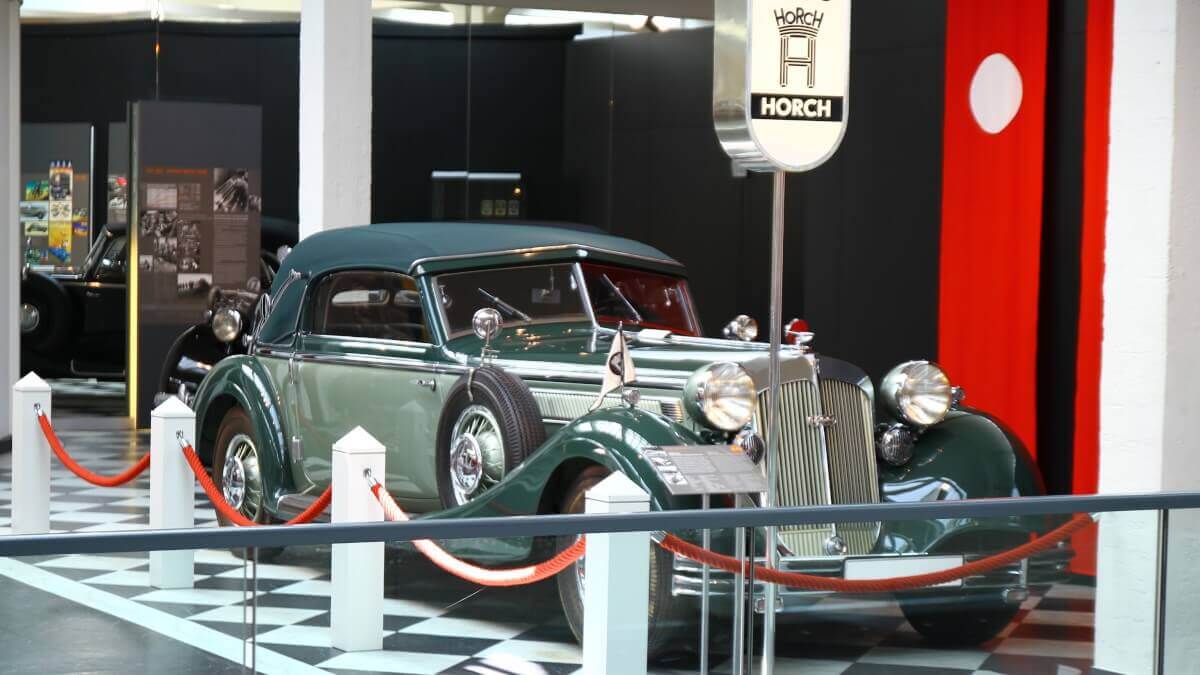 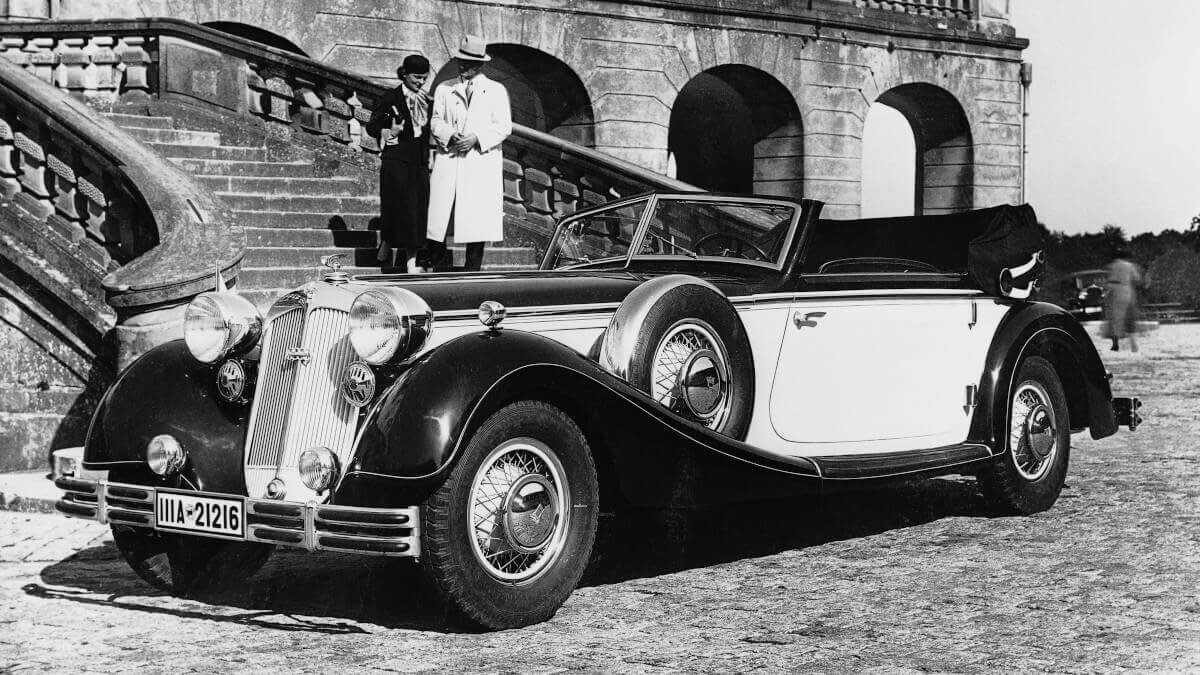 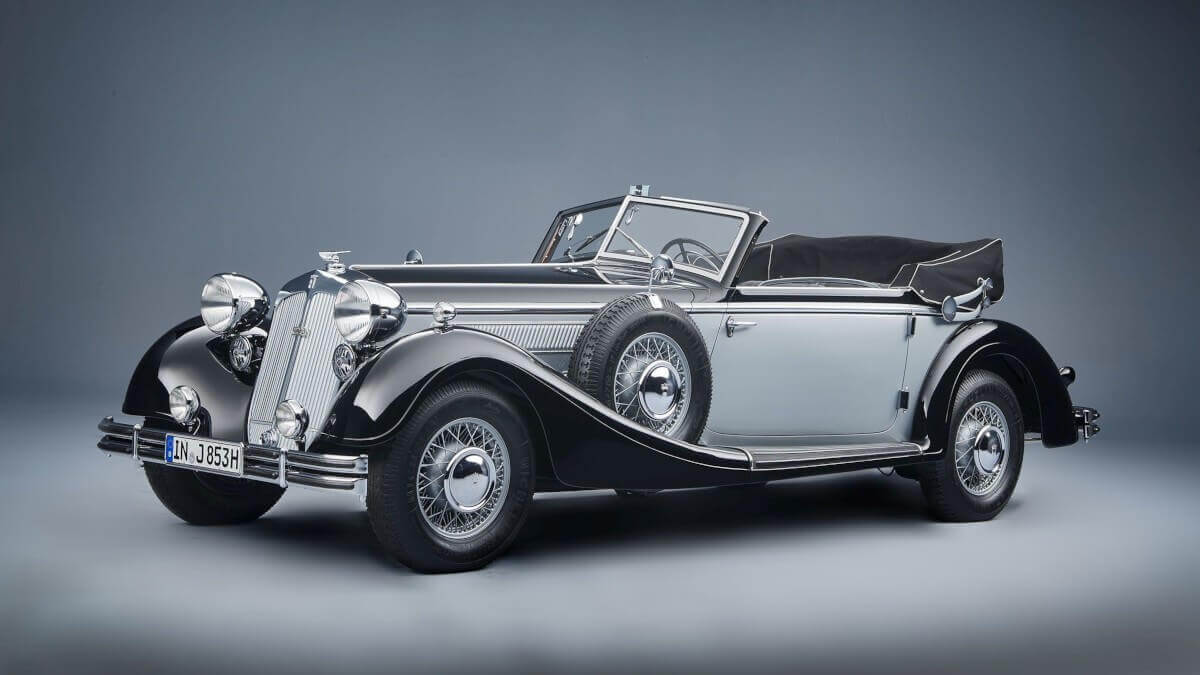 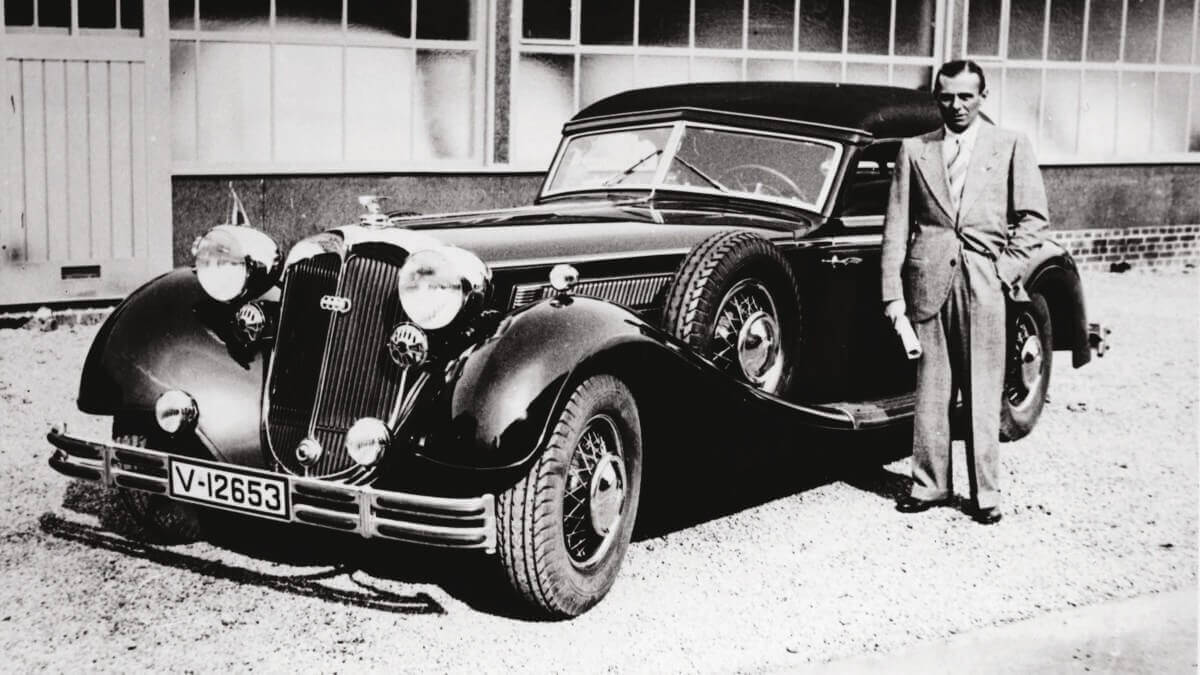 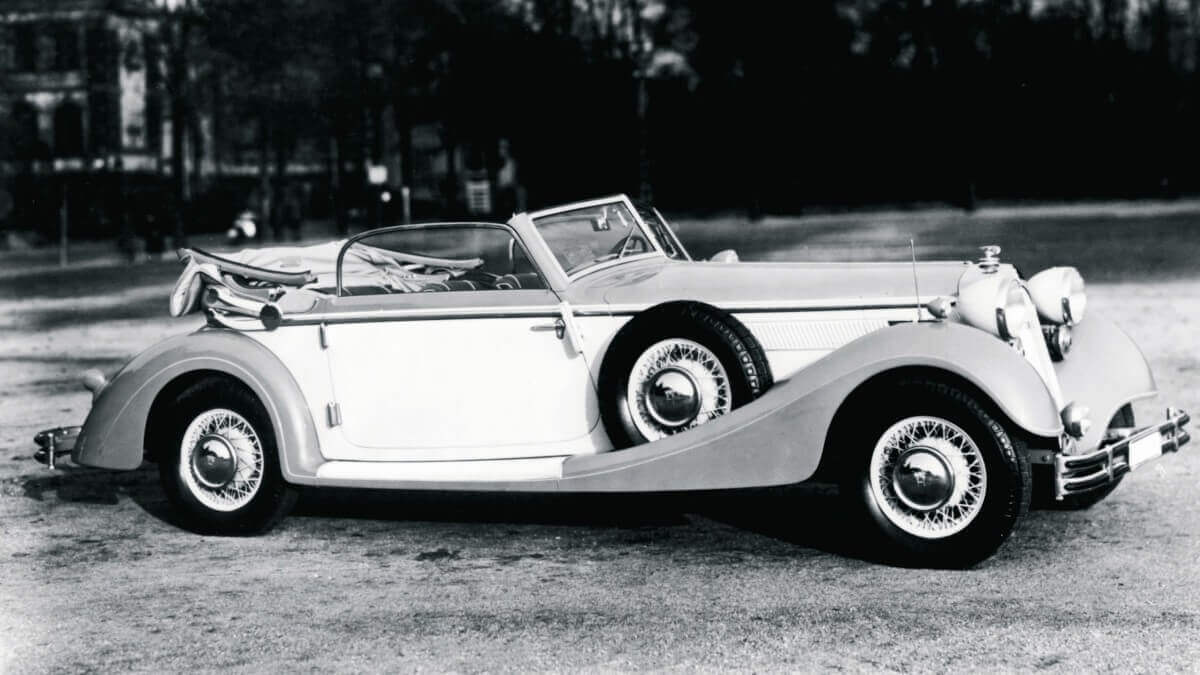 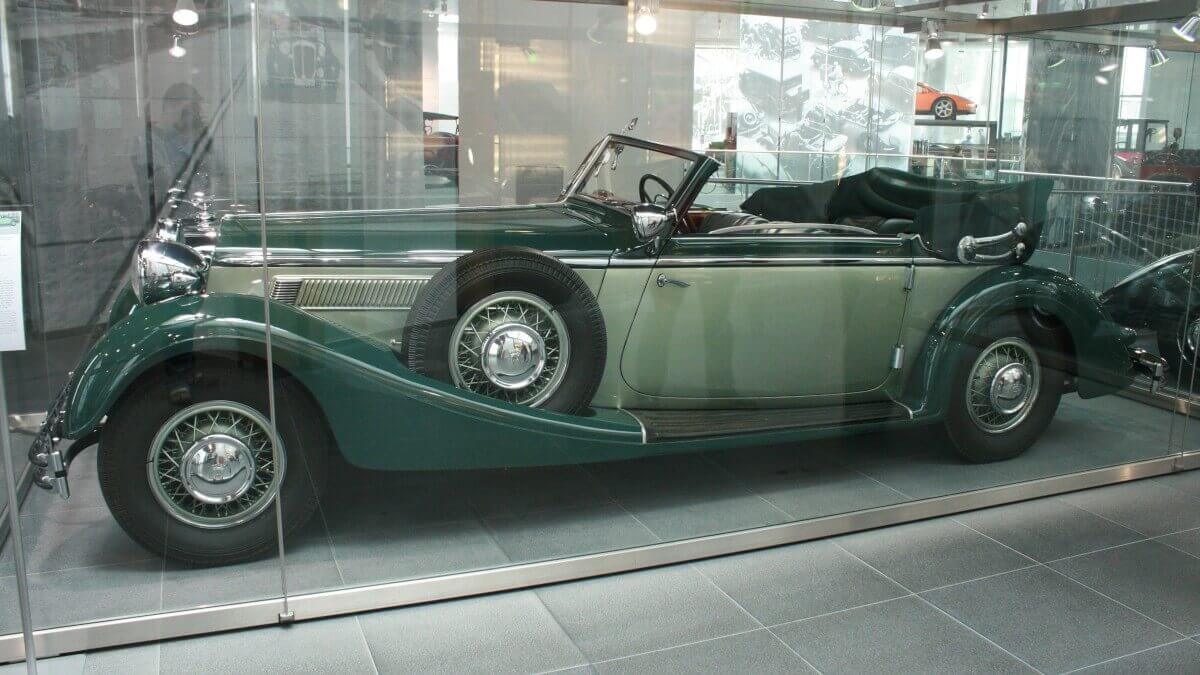 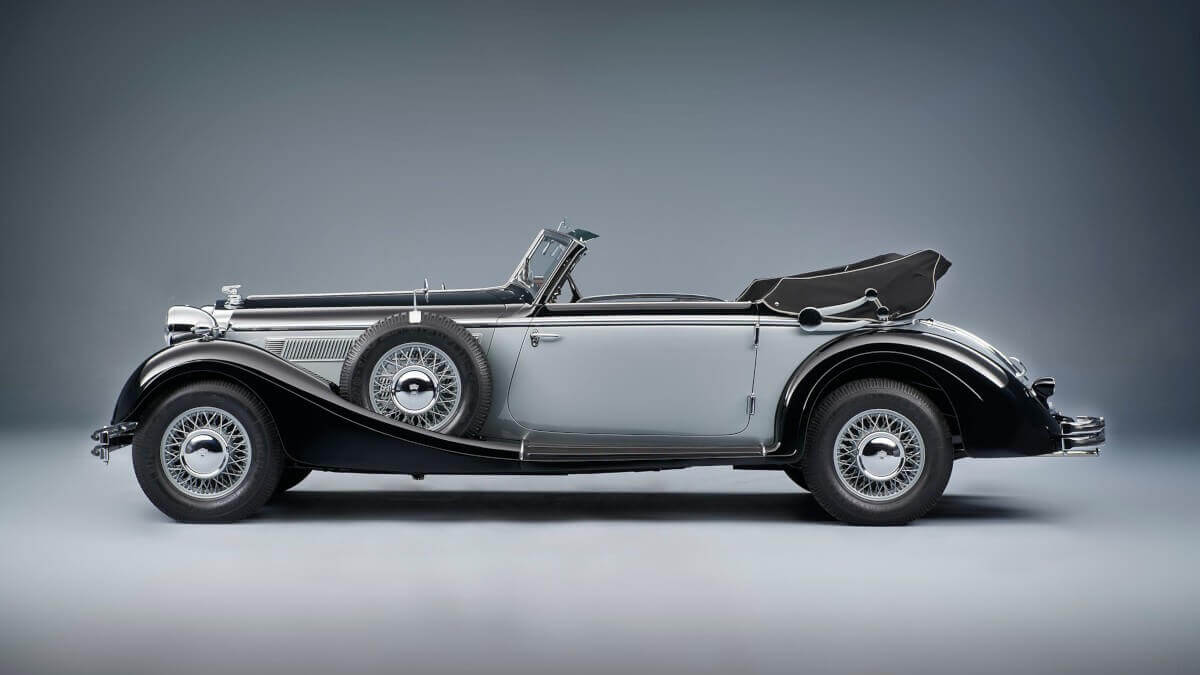 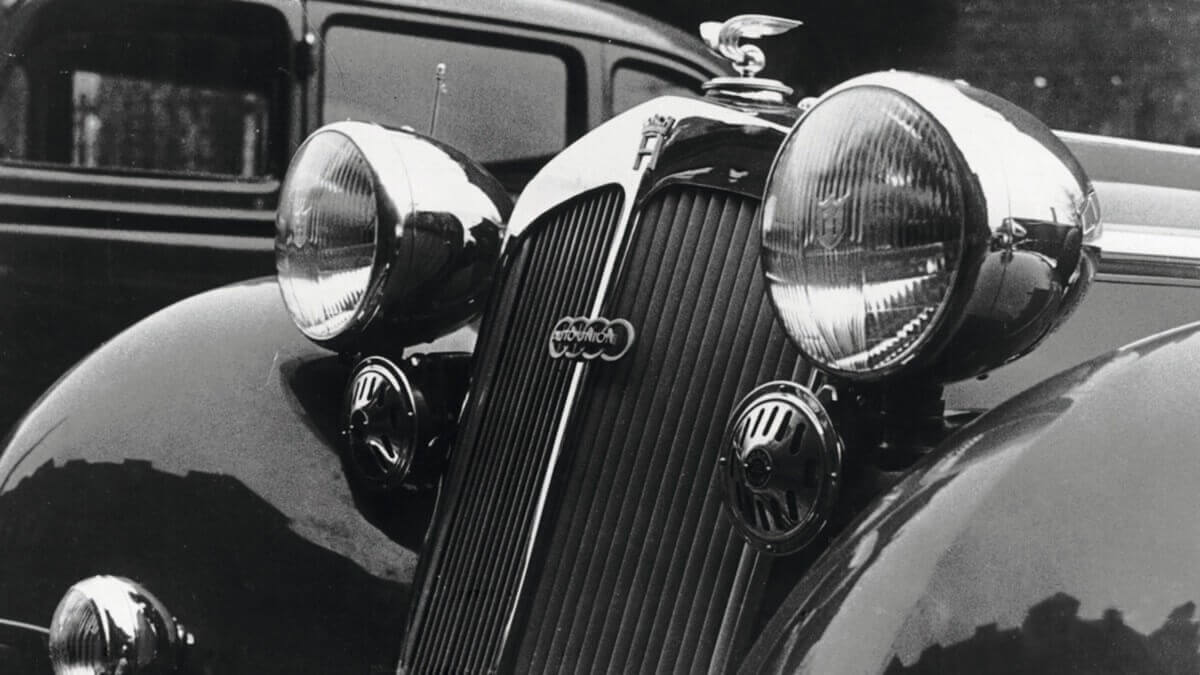 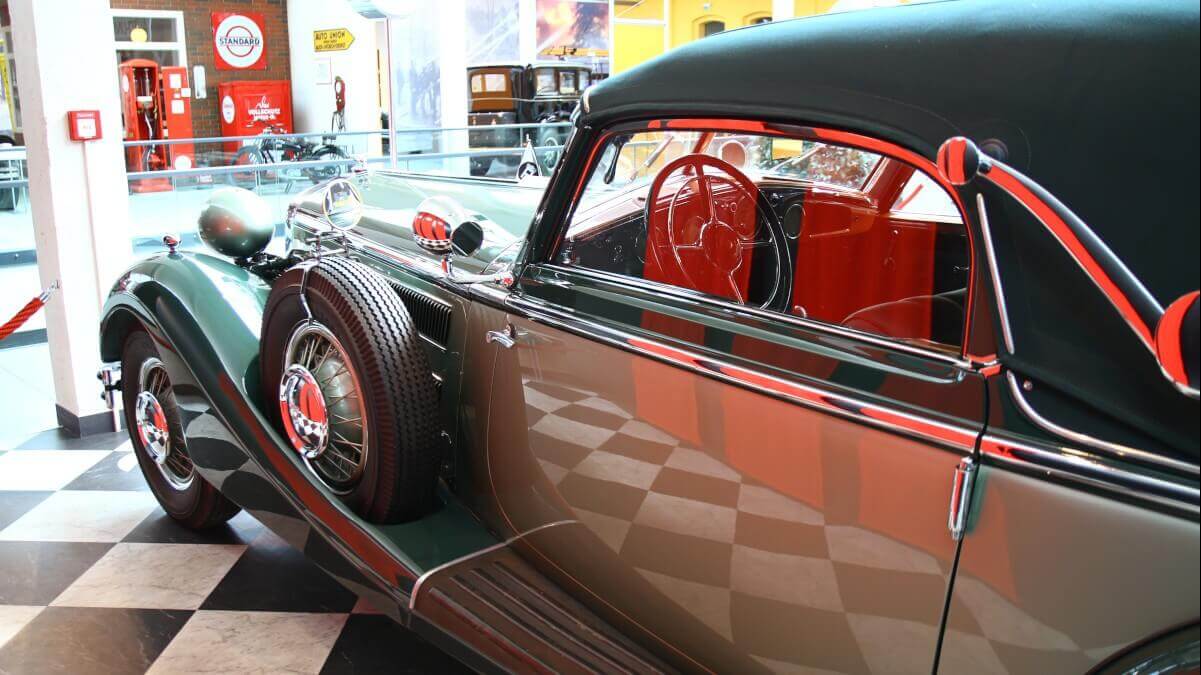 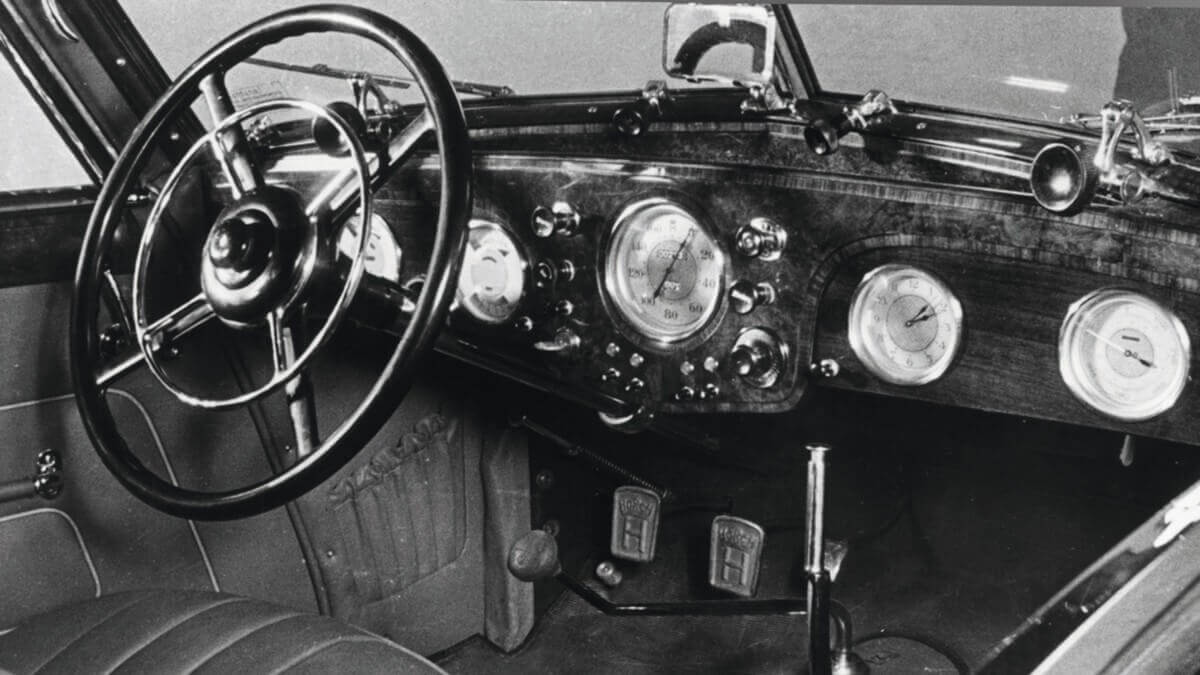 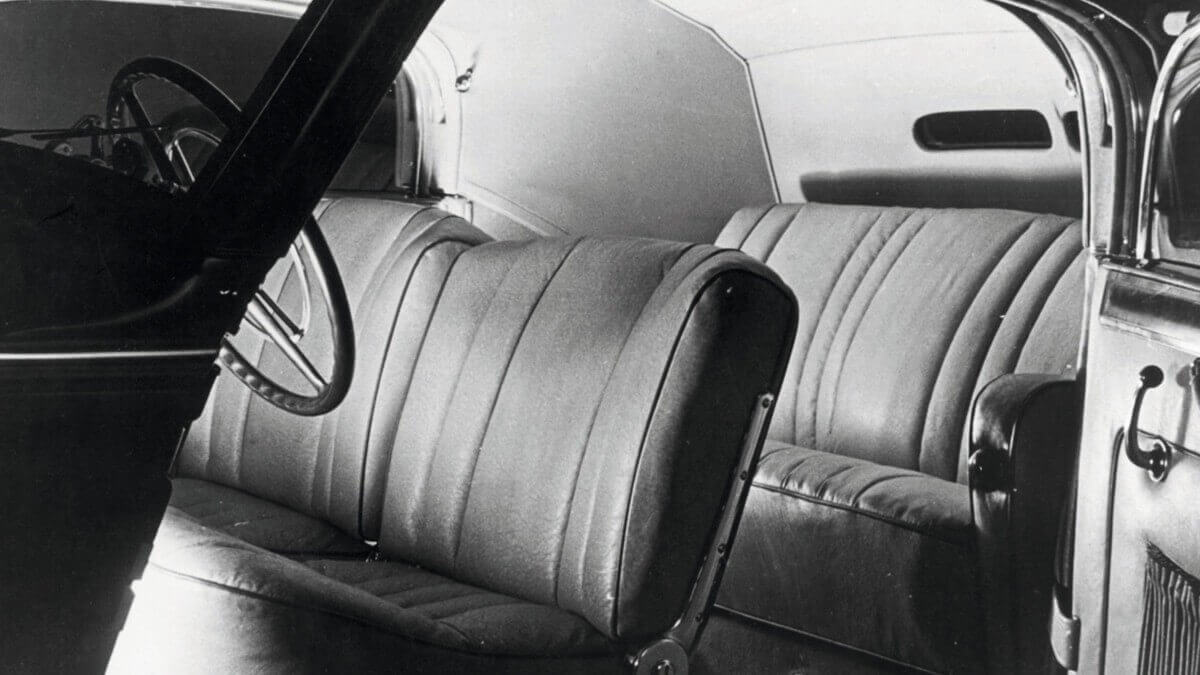 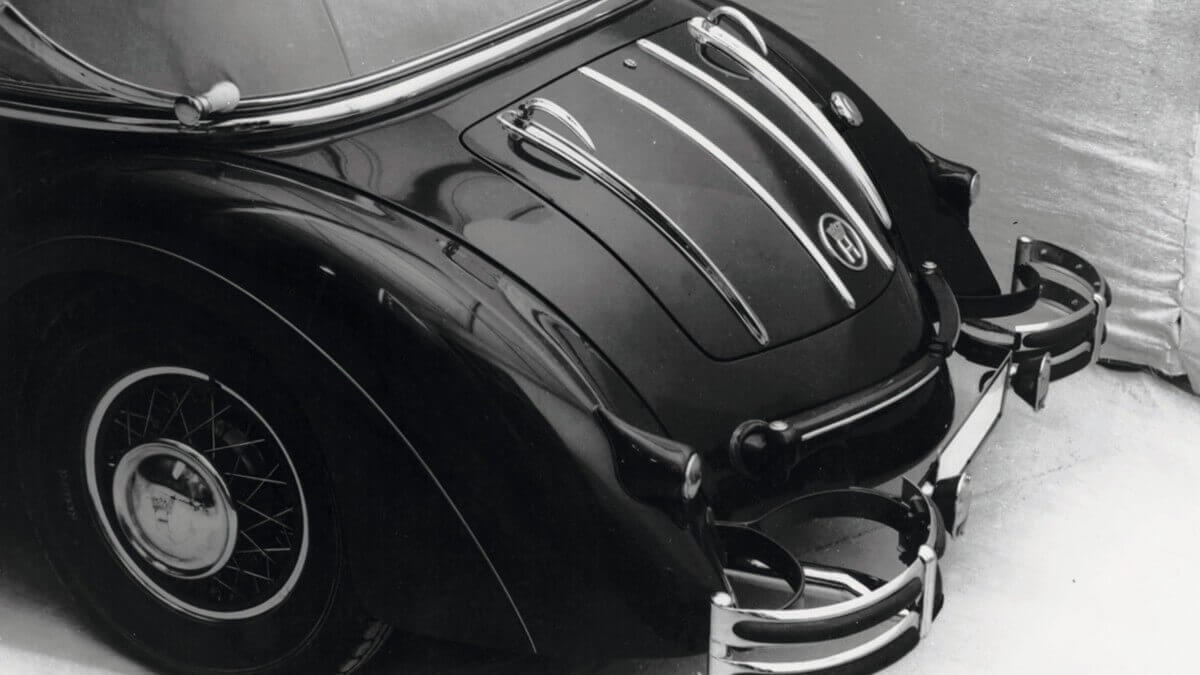 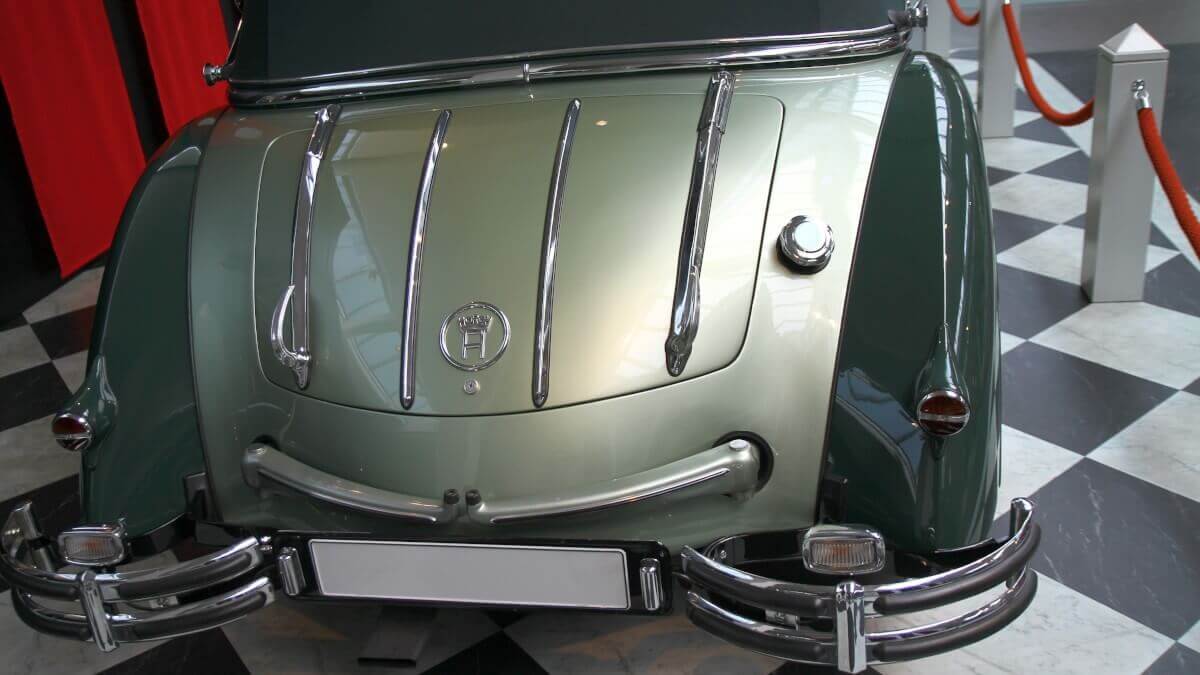 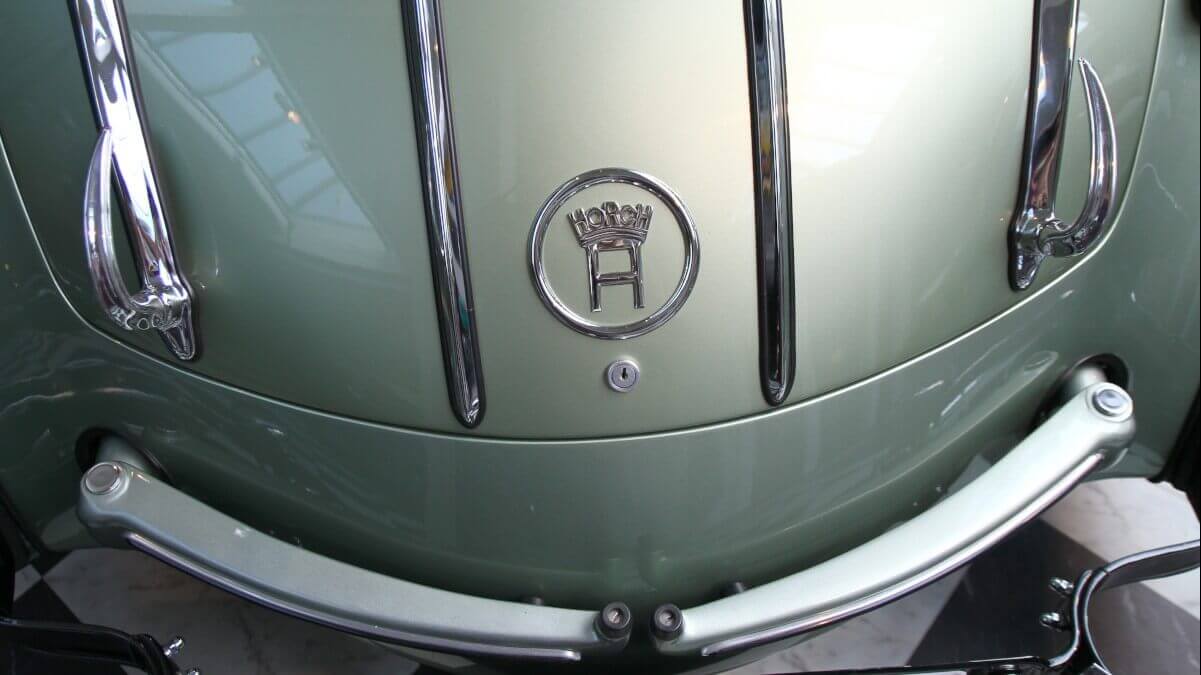 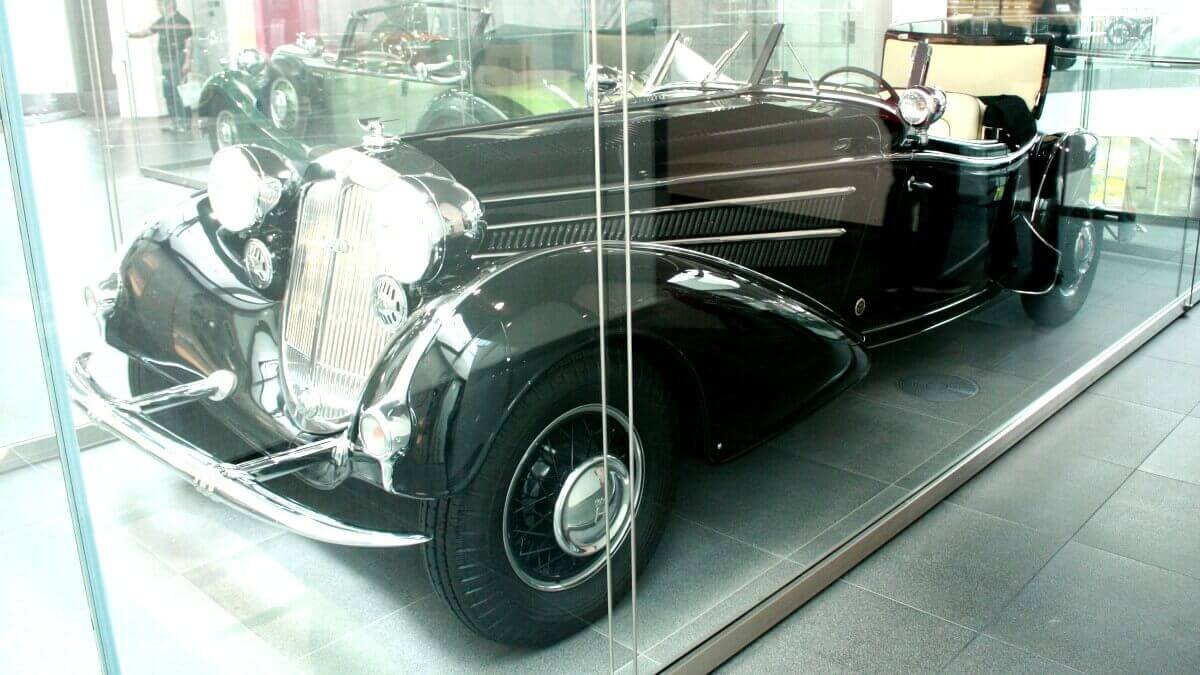 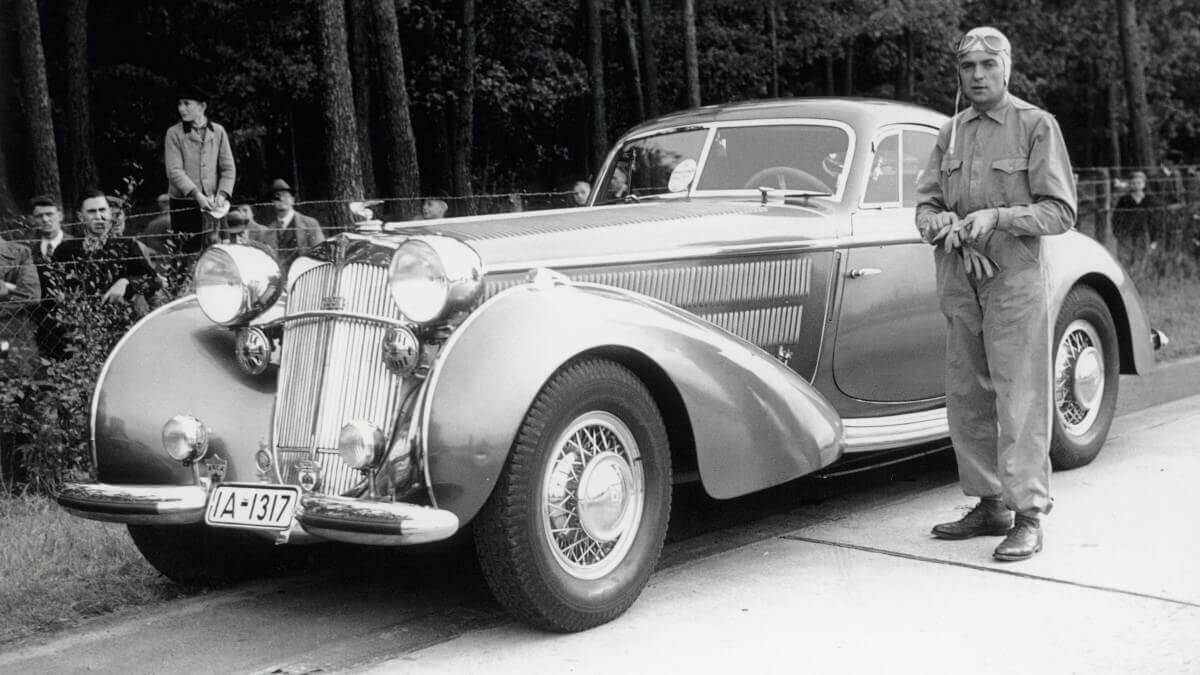 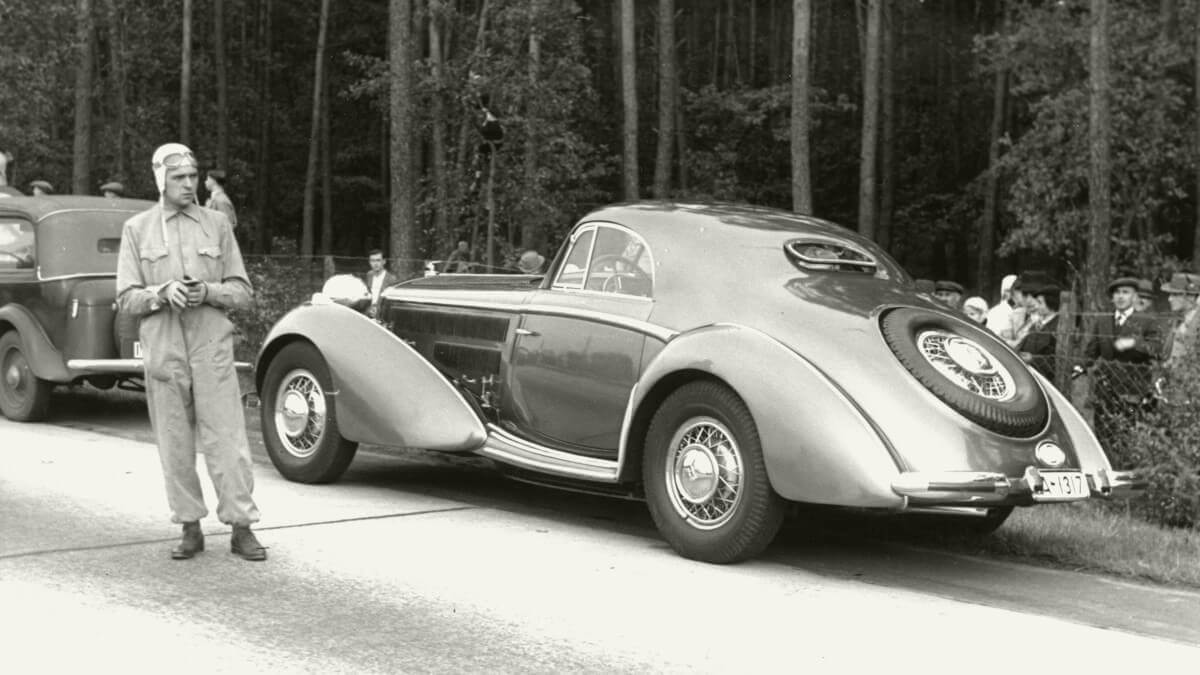 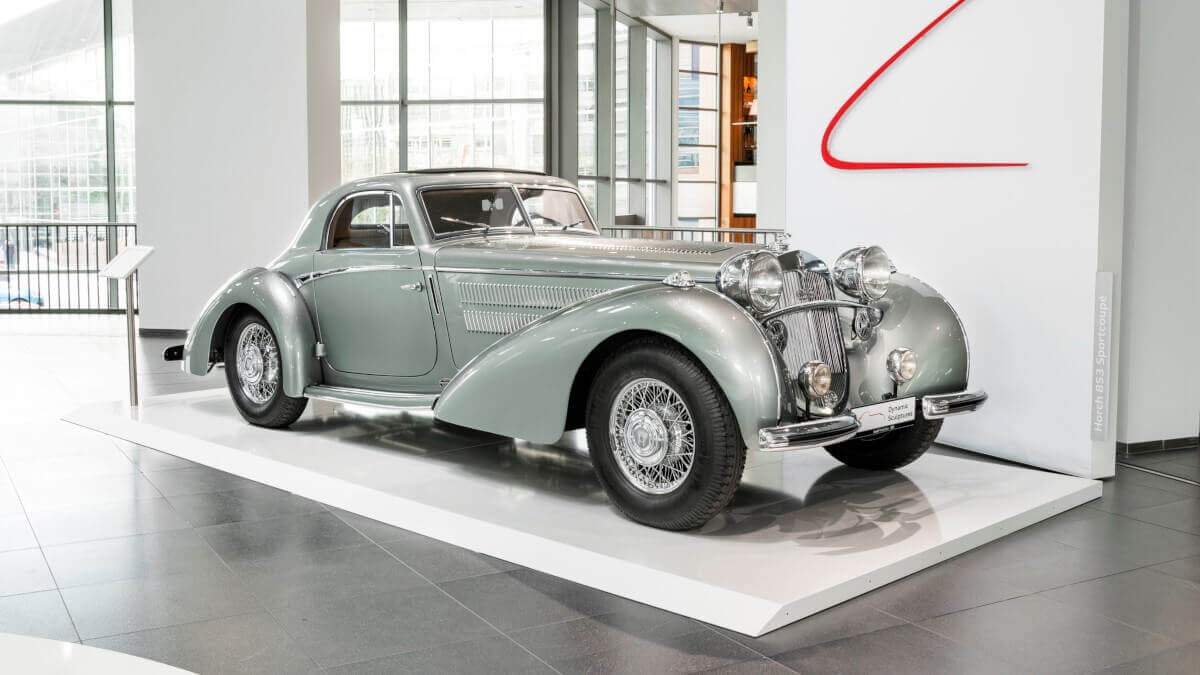 To this day, the design of the Horch 853 Sport Cabriolet is still regarded as one of the most beautiful of the 1930s. It was drawn by Günther Mickwausch from the Horch design office. In keeping with the style of the time, he gave the Sport Cabriolet curved fenders that were nestled to the engine area, external spare wheels in front of the doors and a relatively tightly cut fabric soft top with external bows. For the first time four different ‘fish-silver’ colors were available on request. This didn’t mean four different shades of silver, but the metallic paint that is still popular today. In those days, instead of metal particles, ground fish scales were actually stirred into the paint. While many special bodies of the Horch 850 and 851 were made by external coachbuilders like Gläser in Dresden, the 853 Sport Cabriolets were produced directly by Horch.

In 1938 Horch presented the special model 855 Spezial-Roadster with a wheelbase shortened to 3.3 meters and a kerb weight reduced from 2.6 to 2.4 tons. This increased the topspeed to 140 kph (86.9 mph). However, the basic price of 22,000 Reichsmark in connection with the beginning of World War 2 ensured that only seven copies were produced. Number 7 belongs to the collection of Audi Tradition and can be seen in our picture gallery on the fourth last picture. This is followed by three pictures of a very special 853, which was given a Coupé bodywork by Erdmann & Rossi for Bernd Rosemeyer, the former Auto Union works racing driver at the time. Rosemeyer lovingly called this sports car Manuela. After his death during record runs the car went to a new owner. Due to the chaos of war the traces were lost, so the original is considered lost. Audi has already exhibited a worth seeing, true-to-the-original replica several times in its own museum in Ingolstadt and at other events. According to estimates, between 10 and 15 percent of the total of 1,024 units built of the 853 and 853 A received special bodies. Unfortunately, only a few of these are still known today. Most of them are Spezial-Roadster bodies from Erdmann & Rossi.